With spring migration well underway and many things happening all at once, I really quite often don’t know where or how to bird.  Not to mention that I have a family, job, etc. Do I go on another driving quest to find a Short-eared Owl or do I keep checking for those elusive American Black Ducks? Do I take the Christmas lights off the house or do I finally rake last fall’s leaves out of the yard? Decisions. Yet, for some reason, I had American Avocets on the brain.  Maybe this is because a couple of them had been reported out by the South Dakota border or maybe it’s because I remembered that a few had started to sprinkle our state by this time last year.  Whatever the reason, I was feeling avocety today.

I had never seen an American Avocet before, and it’s a bird Evan and I have talked about and wanted to see.  It is an absolutely stunning shorebird.  It is also a scarce bird for our state as we are just east of its normal range. This evening I had a chance to do some birding and quite possibly look for one of these guys on a hunch.  Melissa was taking Marin to dance class, so I dragged Evan in the car with me to go check out the sewage ponds at Atwater.  I told him that he could play his iPad in the car, but he had to come with as I couldn’t leave him home alone.  I debated heading up to Paynesville to check out their sewage ponds, a location that briefly had a couple avocets last year.  But I decided against it and opted for the poop ponds closer to home.  I had actually stopped by them earlier in the evening on my way home from work just to scout it out.  I was astonished to find 10 Bonaparte’s Gulls, a bird that we just saw for the first time last weekend.  No, I didn’t find an avocet, but I decided to return later anyway to investigate some shore birds I didn’t have time to identify. Who knows, there might have been a new one, so I had to come back to check. 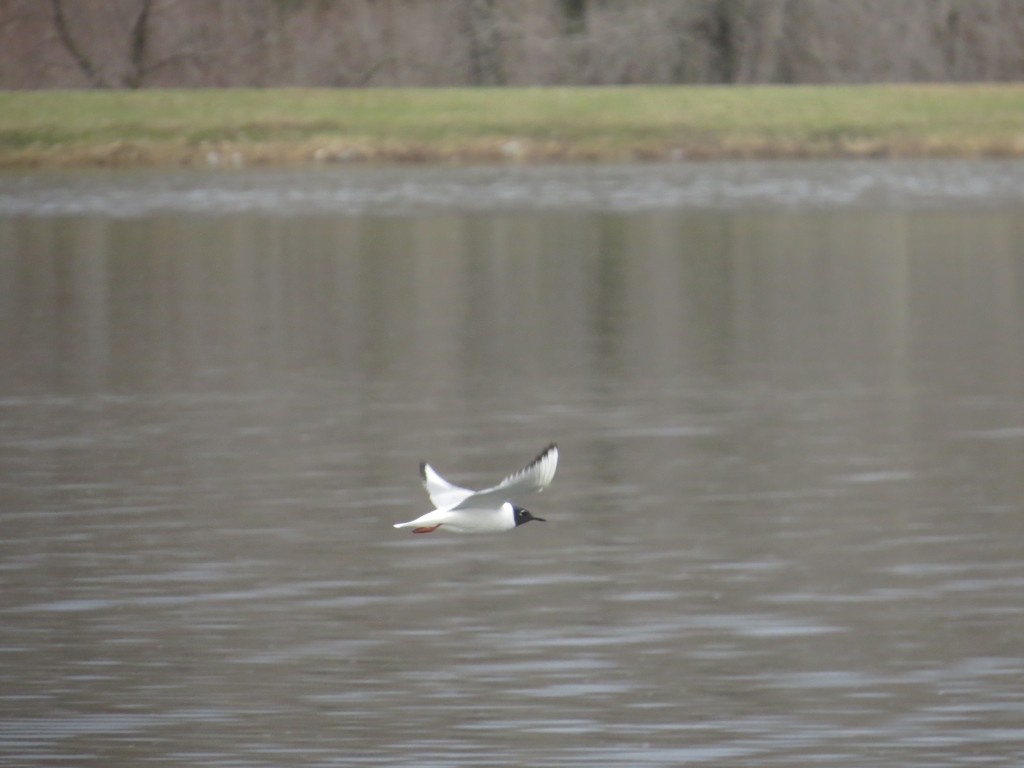 When Evan and I got there we saw the Bonaparte’s Gulls and a bunch of waterfowl – all things I saw earlier in the afternoon.  I also found the shorebirds I had seen.  Turns out they were just some Pectoral Sandpipers and a Lesser Yellowlegs. Bummer. 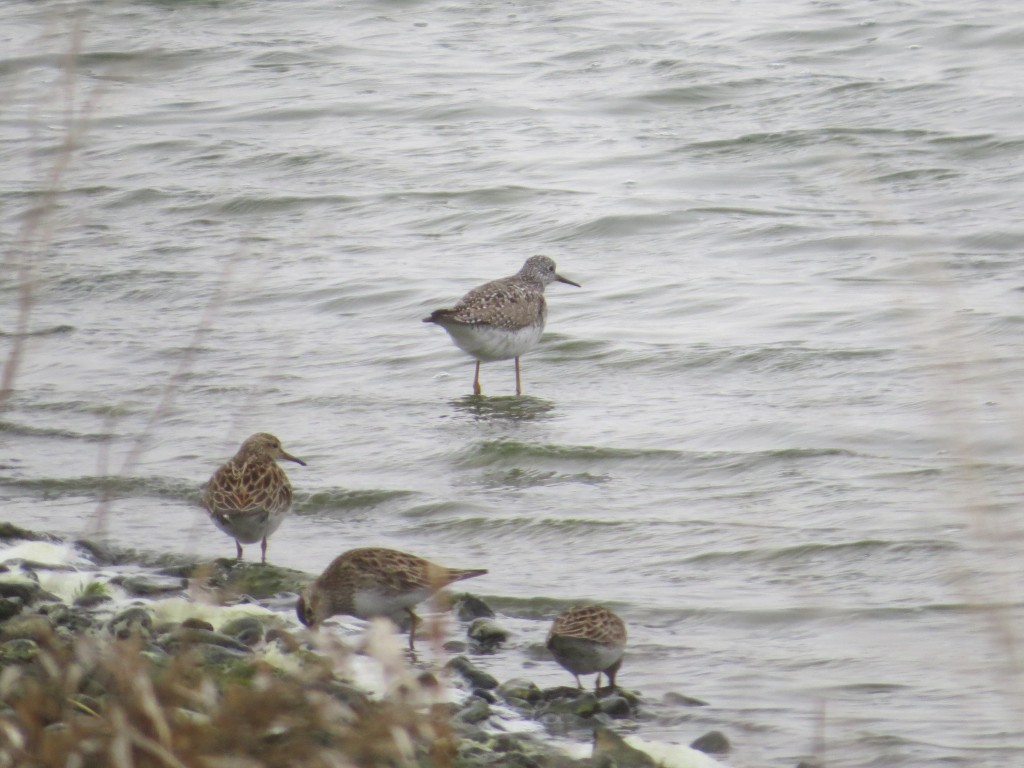 These shorebirds flushed away from me and went to the west shore of the rectangular pond.  They were actually in a place where I could sneak up over a dike and see them pretty close to get some better photos.  As I walked up the dike and looked over the fence, the birds flushed.  But so did another gangly shorebird much further down that had a long bill and legs dragging out behind it as it flew. I couldn’t pull up my camera fast enough to see what it was.  I knew it was one of two birds – the Black-necked Stilt or American Avocet.  Either would have been an incredible find.  To my joy, it was our American Avocet life bird – the very bird I had been thinking about today!  I snapped this horrible shot in the wind and rain and then ran down the dike to tell Evan who was waiting in the car playing his iPad. 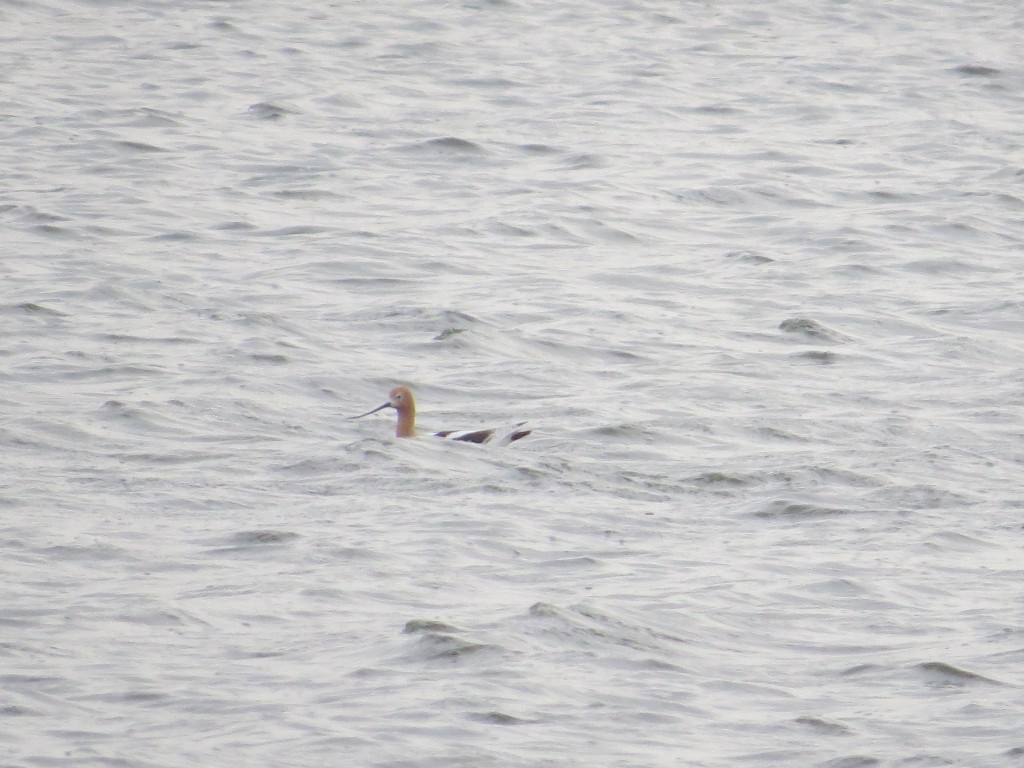 I wish I had a picture of that kid’s face when I told him I just found an American Avocet. His eyes were as big as saucers and he was racing to unbuckle and scramble out of the car.  I was able to show it to him with the camera, but I knew we could do better.  We went back down to the center dike which would put us much closer to the bird.  We then spent the next hour sneaking up on this bird from behind this other dike to get good looks at the bird. 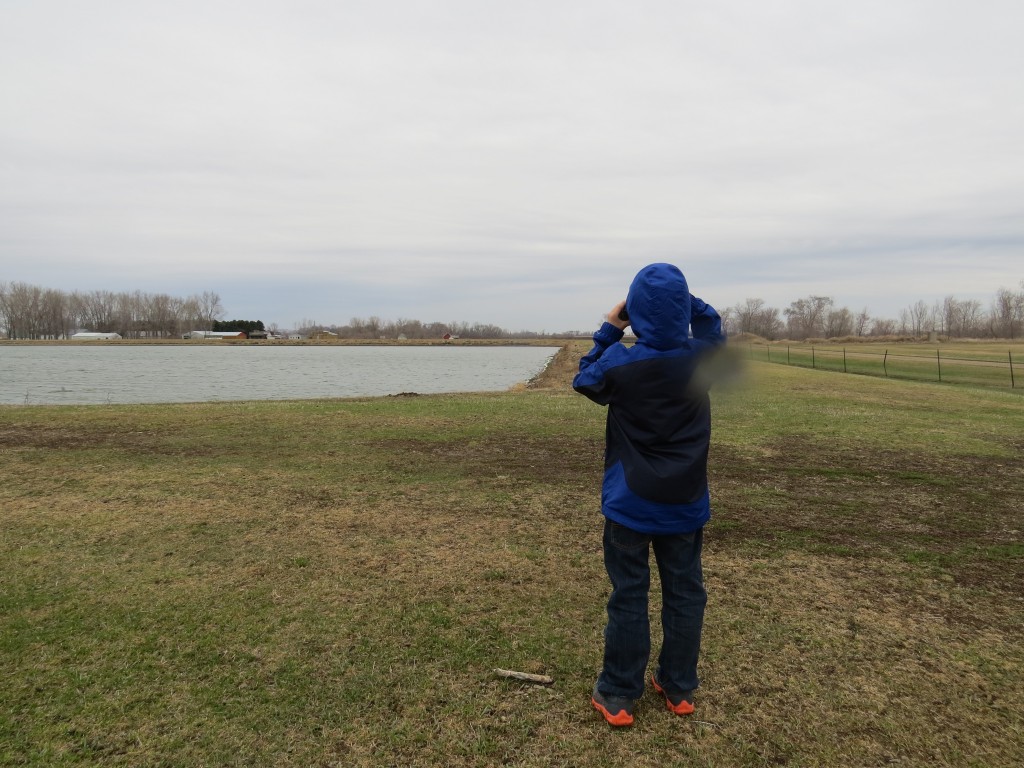 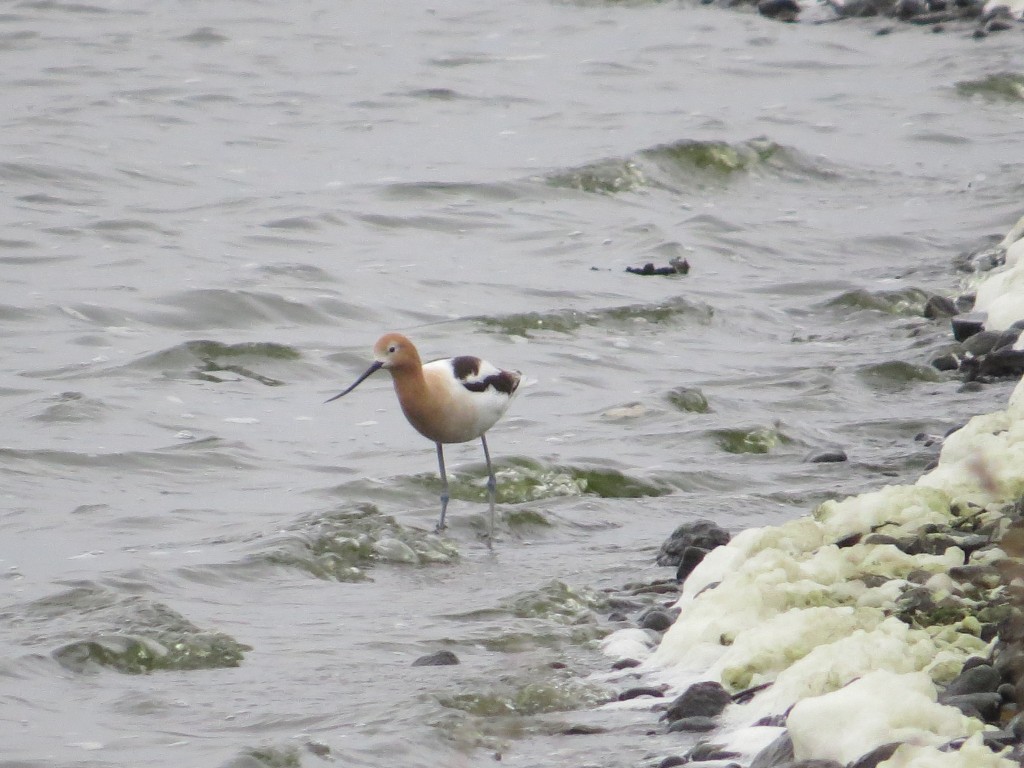 I had texted Steve and got him on the road right away.  I knew that he’d probably want this one for his county list.  While we waited for Steve, Evan and I kept trying to get good looks and photographs of this bird.  I knew Evan was digging this new bird since he was with me the whole time in the chilly 42 degree weather of wind and spitting rain. A couple times we went back to the vehicle to warm up.  When my fingers would thaw, I’d head back out again to try for better photos.  I figured Evan had his fun and would just stay in the car, but when I was out doing my sneaking, I’d look back and see that he had left the comfort of the car for just one more look. 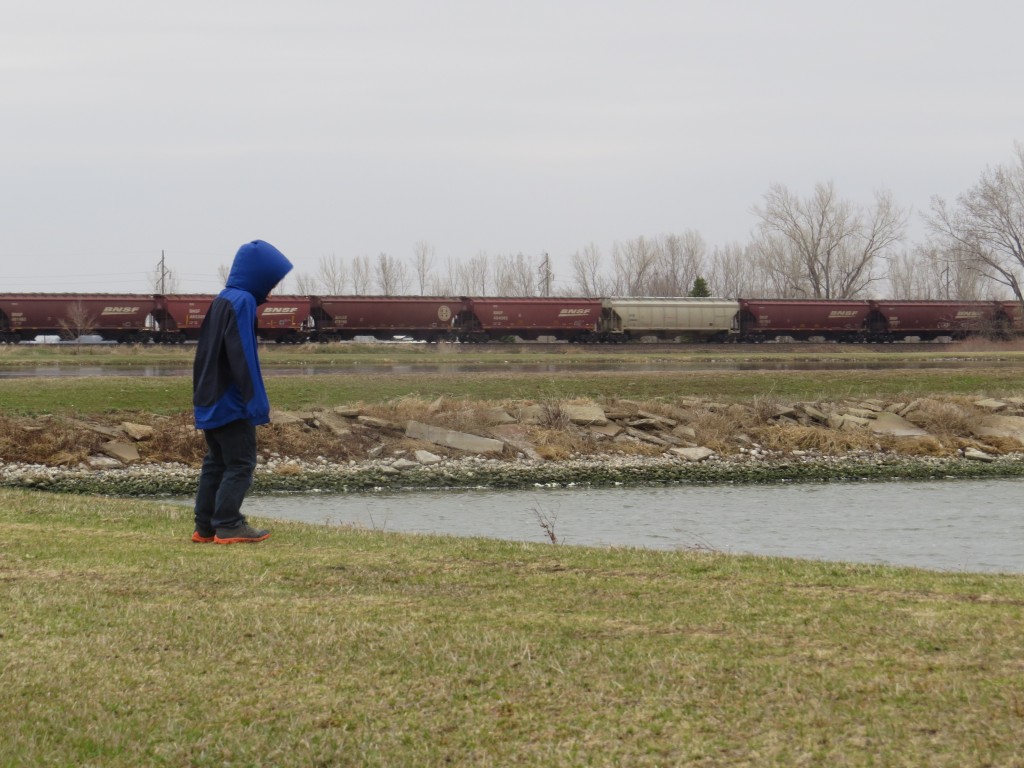 Who could blame him with a bird like this? 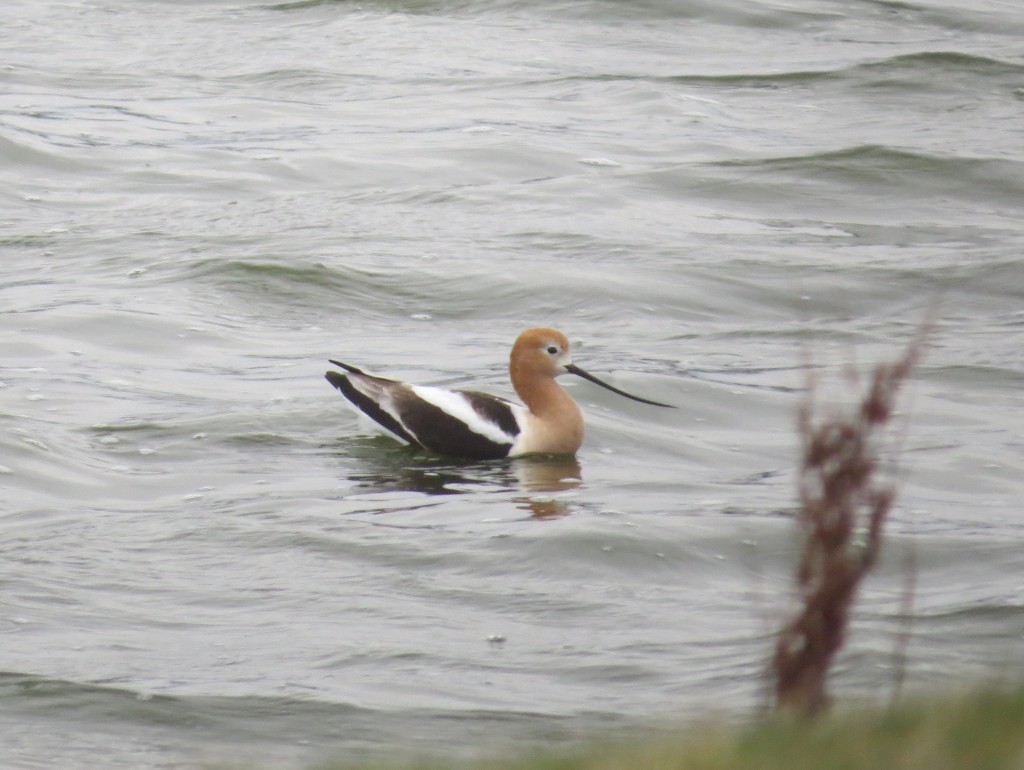 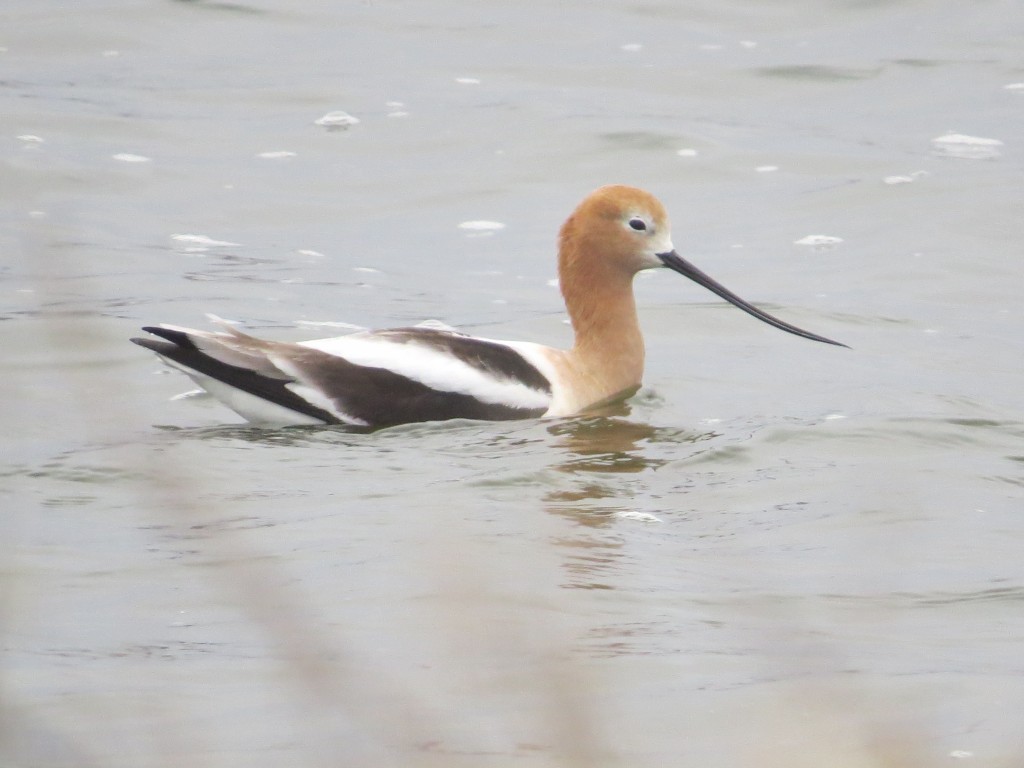 Several times I would sneak over the dike to try to get good photos.  The bird would spot me, vocalize an alarm, and then fly out and land in the water about 20 feet from shore. It would then feed and work its way back to the shore. 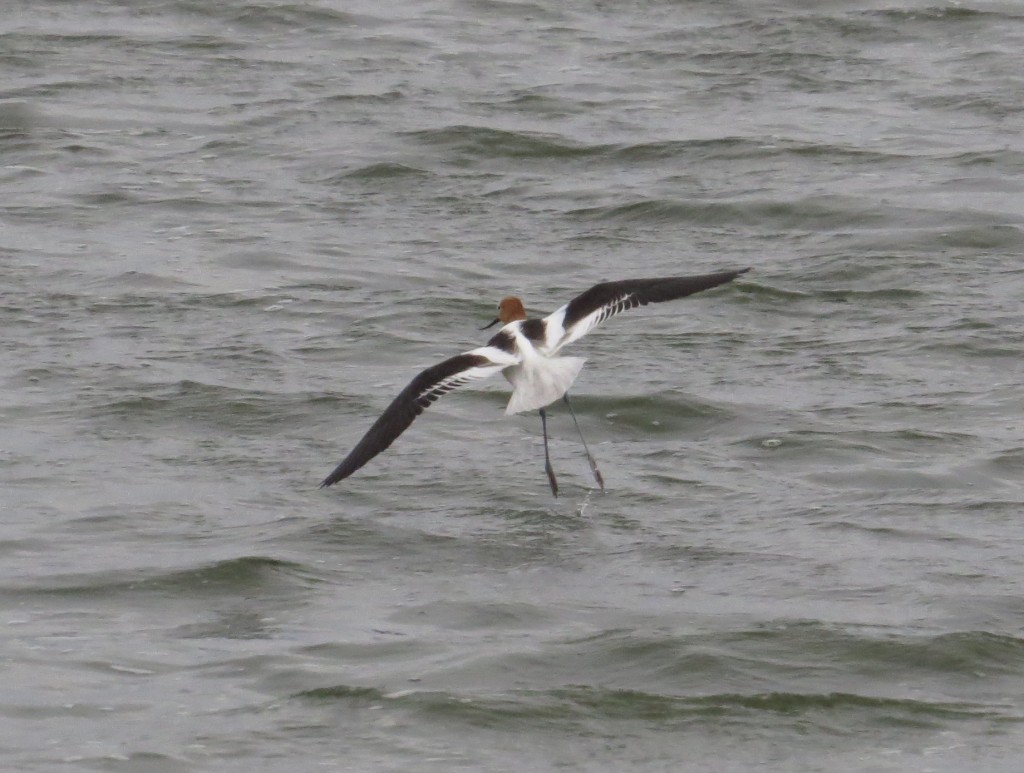 It was quite a thrill to tally this one on our life lists.  And it was fun to watch Evan’s genuine excitement over seeing this beauty.  It’s hard to believe we found our fourth life bird in just three weeks, three of which have been scarce and even rare.  I’m hopeful and excited about what else migration has in store for us this spring.  It has already exceeded any wishes or expectations.