When summer began I had a list of resident birds that had eluded me for over two years. Migrations and periods of summer residency came and went with no sign of these birds that live here at home in Kandiyohi County during the summer months.  General laziness and greenhorn status is certainly a part but not the entirety of the cause.  No, this list of birds reads like the Who’s Who of the most evasive and elusive birds on the continent. They were dismissed in my early birding days because they are rag-tag bunch of drab and frumpy-looking earth-toned birds.  They didn’t bring the ‘wow’ factor like a Scarlet Tanager or a Blue-headed Vireo.  Little did I know that this ‘playing hard-to-get’ quality would make them some of the most desirable birds around.  So here they are with their current status indicated.

Wood Thrush: Heard Only – the worst way to get a lifer (is that even a lifer?)

: Conquered –  twice over with some crummy photos to boot!

Seen – but a pale juvenile far, far away. Sigh.

So I guess I was fairly successful since I made contact with all but two on my list.  Even still, with nary a decent photo to show for my efforts, my work was anything but satisfactory. There’s no other way to put it – these birds are all just buggers, the whole bunch.  Given this C- performance on my wish list and the recent Least Tern fiasco, I’m happy to report that we’d have the last laugh over one of the species on this list and put it to rest photographically speaking.  It was a Life Bird thumping with unobstructed views requiring no binoculars.  And the icing on the cake was the cool way it all went down. Read on.

With a bathroom project choking out my time and the new school year looming on the horizon, summer birding season pretty much had all but the last nail in the coffin.  Part of my back-to-school agenda included a three-day training in downtown St. Paul.  On the surface, the Cities may not seem like a birding destination.  But I have seen some amazing birds in the Cities because the pockets and puddles of habitat are prowled and scoured by an army of metro birders.   And lately they were turning up one very cooperative and photogenic bird from my list.  Throngs of people were going to see this bird.  My Facebook feed was spammed up with countless photos of this bird in various lights and poses.  It was ridiculous how easy people were adding this bird to their life and photo lists.  It was cheap. It was unfair.  And I wanted a piece of that action.

So what bird could garner such attention?  It was none other than the Least Bittern, a couple of them in fact.  They were being seen daily from a boardwalk through a marsh at the Wood Lake Nature Center in Richfield.  Being in the Cities at the zenith of this Least Bittern mania was a beautiful coincidence.  The whole family accompanied me to the Cities.  I got trained while hey had fun with their Science Museums, Childrens’ Museums, swimming pools, and such.  But the Least Bittern fun would be a family affair.

We got to Wood Lake Nature Center that first night with about an hour of daylight to spare and quickly huffed our way to the boardwalk that cuts right through the middle of the marsh.  I wasn’t worried about the time element; I knew there would be other birders there.  We just had to look for them and that’s where the bird would be.  Sure enough there was guy with a camera as long as my leg and a lady sporting some fancy binos. We were where we needed to be.  Of course there were no irrelevant introductions, but rather my first words were to inquire if the bird was present.  The answer was no. Before too long the lady went further down the boardwalk to look while the guy stayed put.  I have a tough time sitting still when birds are not being seen, so I started in the direction of the lady.  That’s when Mr. Camera whistled at us and motioned excitedly with his hand for us to join him.  He had it.  Evan and I raced down there, and I caught a mere glimpse of bird’s butt disappearing into the reeds. Mr. Camera showed me a lovely photo of the non-butt parts of the Least Bittern that he took just seconds ago.  The aggravation!

A short time later the lady came walking back to all of us and told us she had another Least Bittern further down.  Mr. Camera was amazingly mobile with his massive apparatus and got down there just as fast as we did.  And there we saw a glorious Least Bittern unobstructed just 6 feet off the boardwalk.  It was awesome. 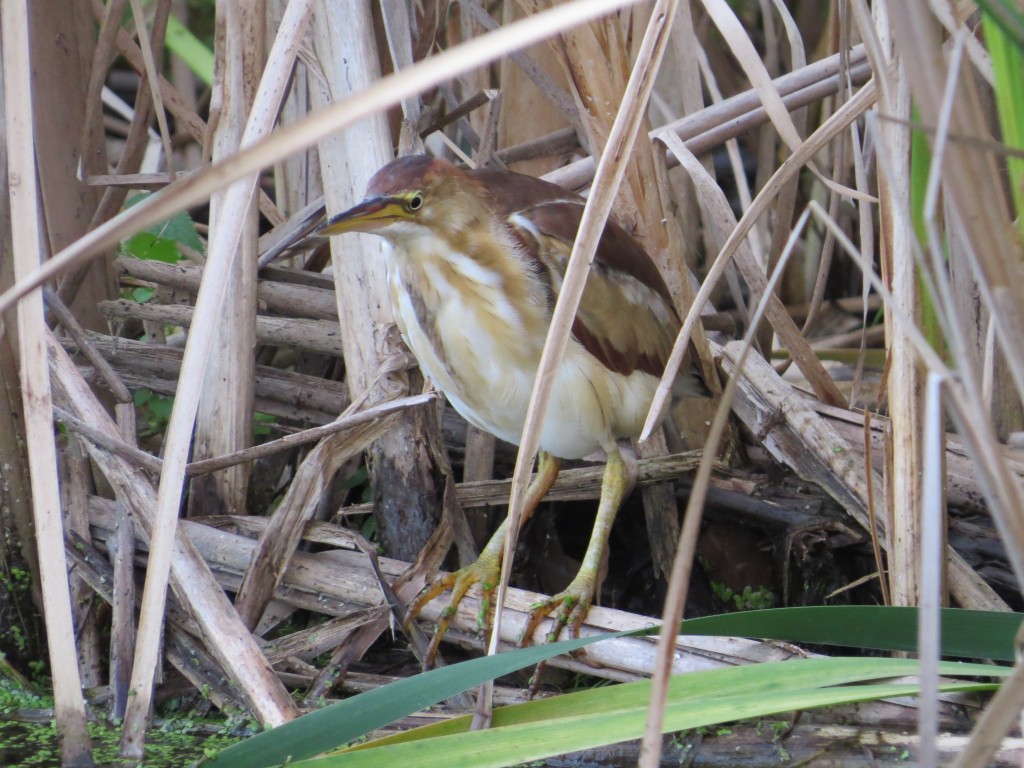 We got to watch this Bittern nab a minnow from time to time.  I was never ready with the camera.  I usually caught it just before or after such a shot. 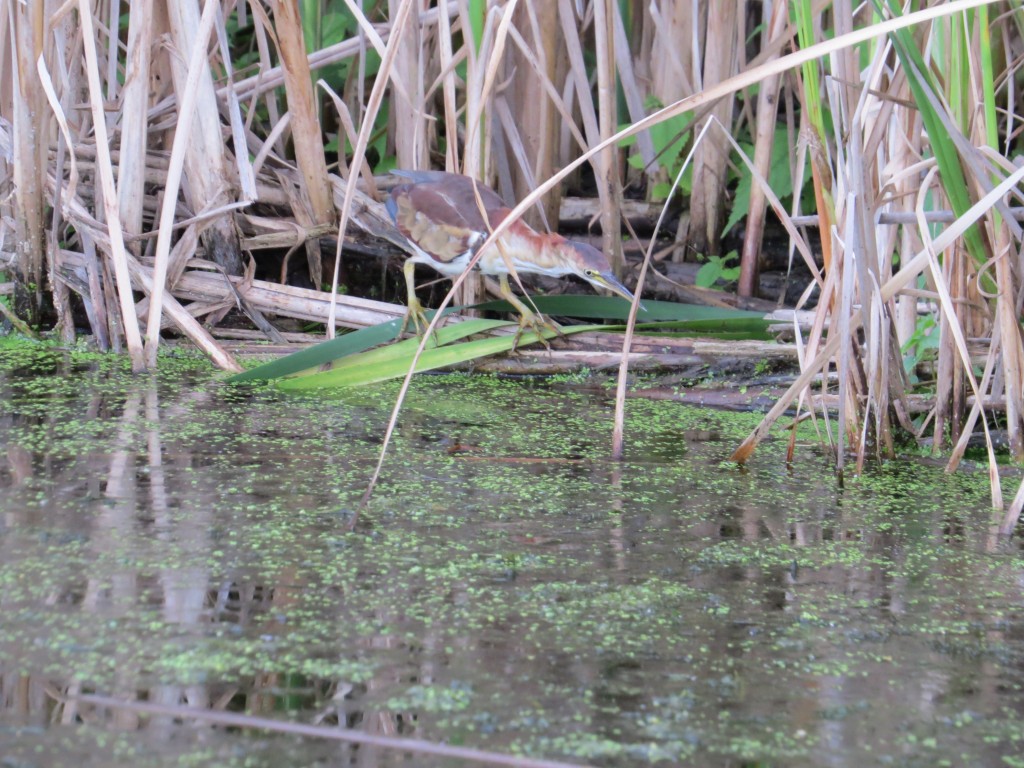 It was incredibly fun to watch.  Here Evan is waiting for it to reappear after one of its many disappearances into the reeds. 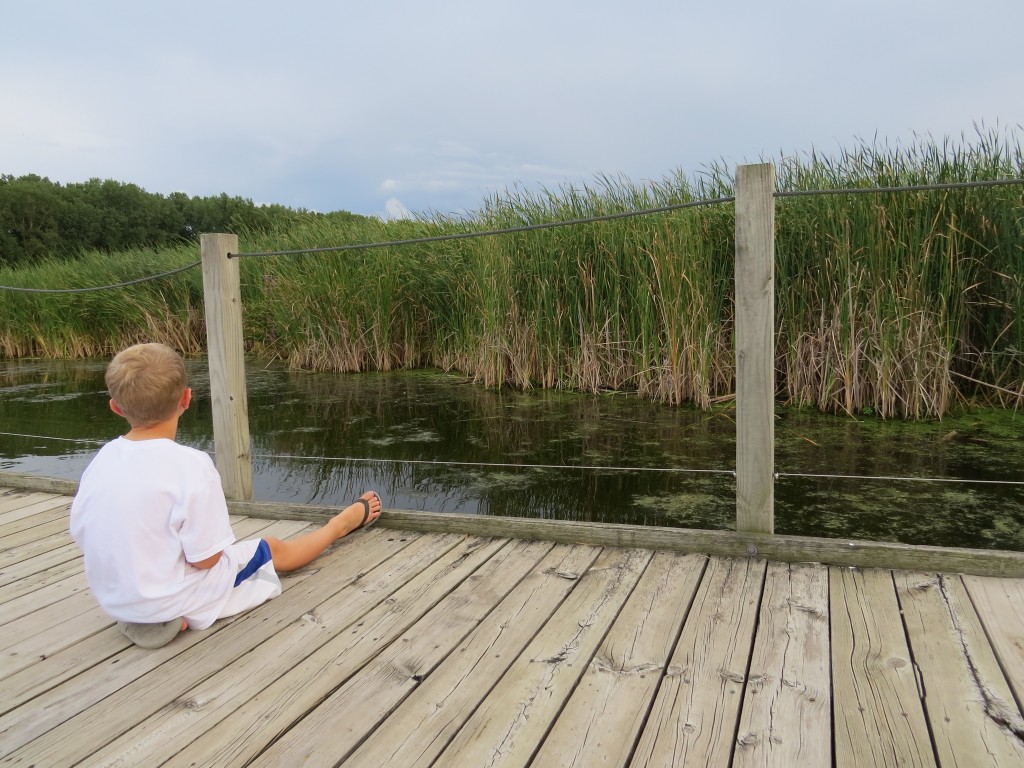 Even Melissa and Marin enjoyed seeing this mysterious, petite bird.  But a potential screaming fit caused the two of them to go off on their own birding venture to look at Mallards and such. All of us, from different vantage points, saw this Osprey come sailing over clutching a fat, little meal from someone’s Koi pond. 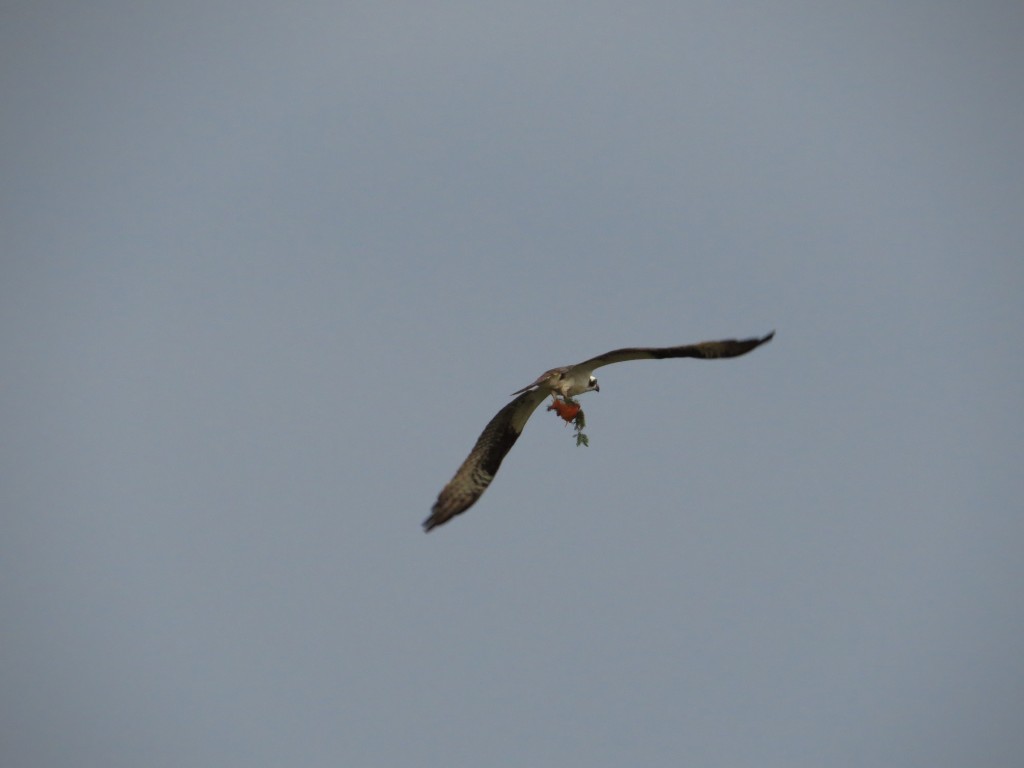 We never had to wait long on the Least Bittern to show up again. 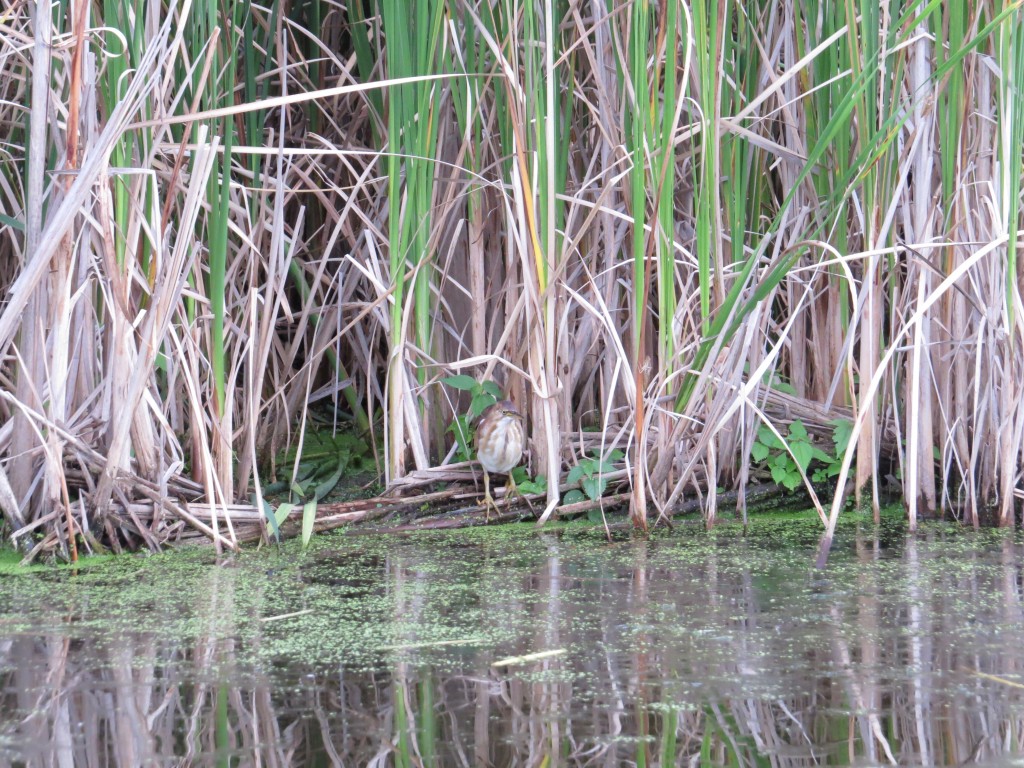 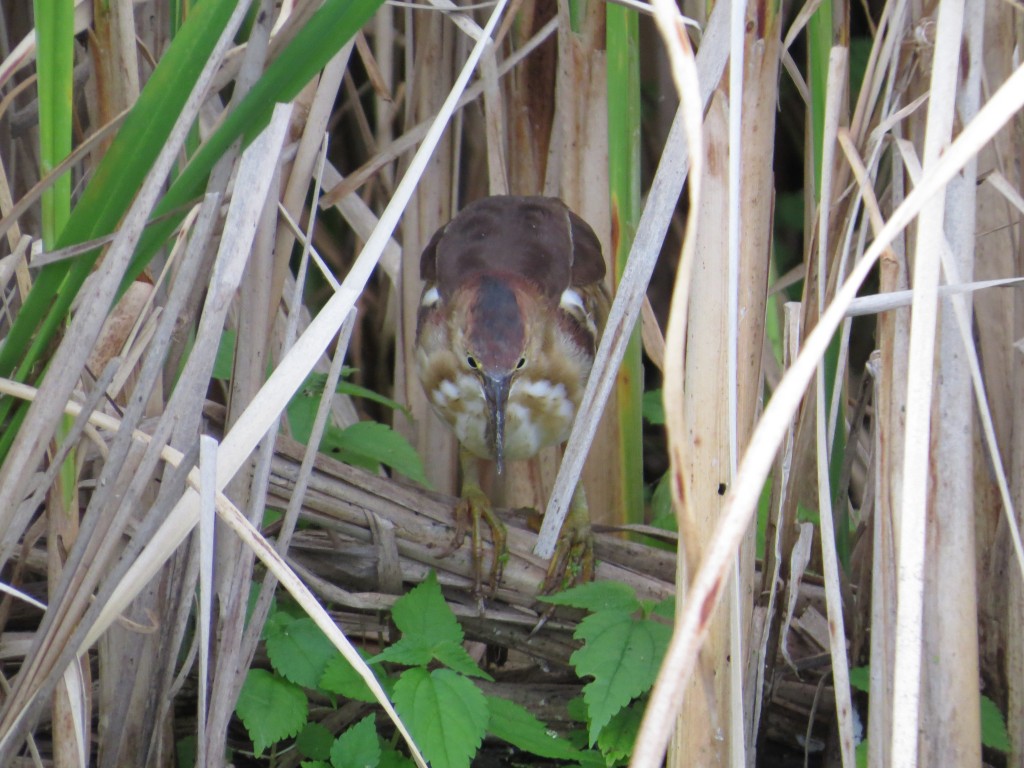 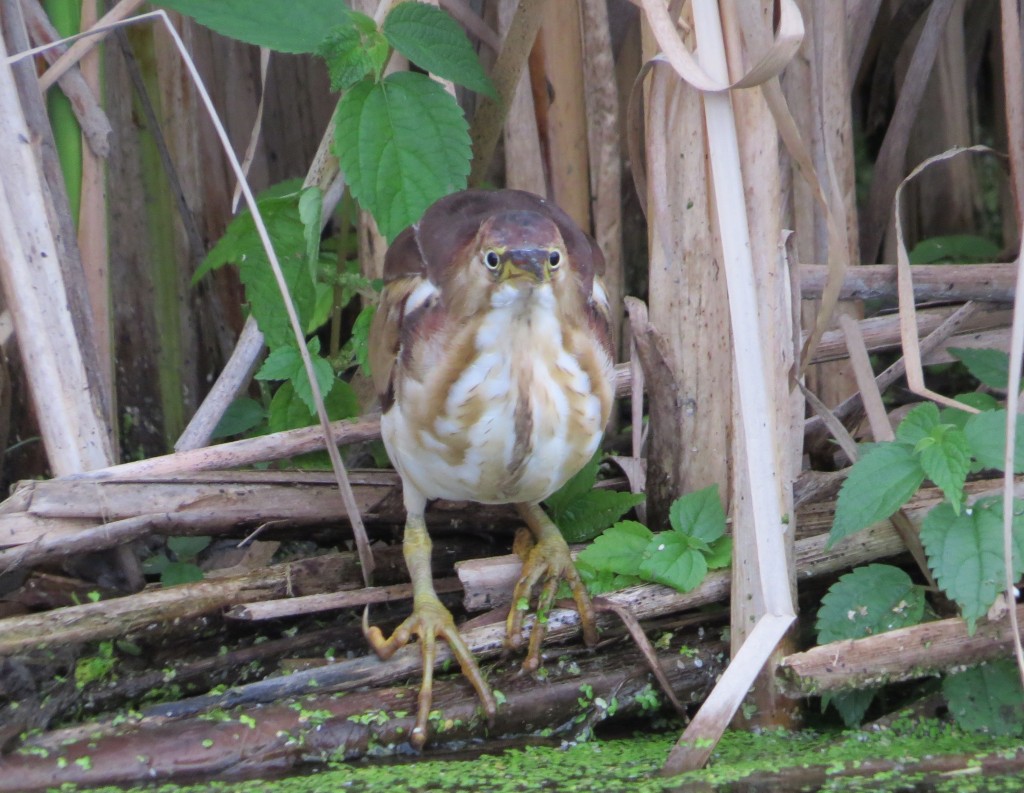 Evan was captivated by this bird.  He never watches birds through binoculars, so he often misses just how cool some birds can be.  Here he needed none to enjoy the bird.  I wanted to capture him in this state, and Mr. Camera and his camera added some birding flavor to the background of the image.  Plus he and Evan were visiting about birds as the guy was asking him questions and teaching him things.  He was an incredibly friendly guy. Moments after I took this shot, the lady birder pulled me aside and whispered that Mr. Camera was Stan Tekiela, the famed author/photographer of the popular state-by-state birding field guides and other nature guide books! 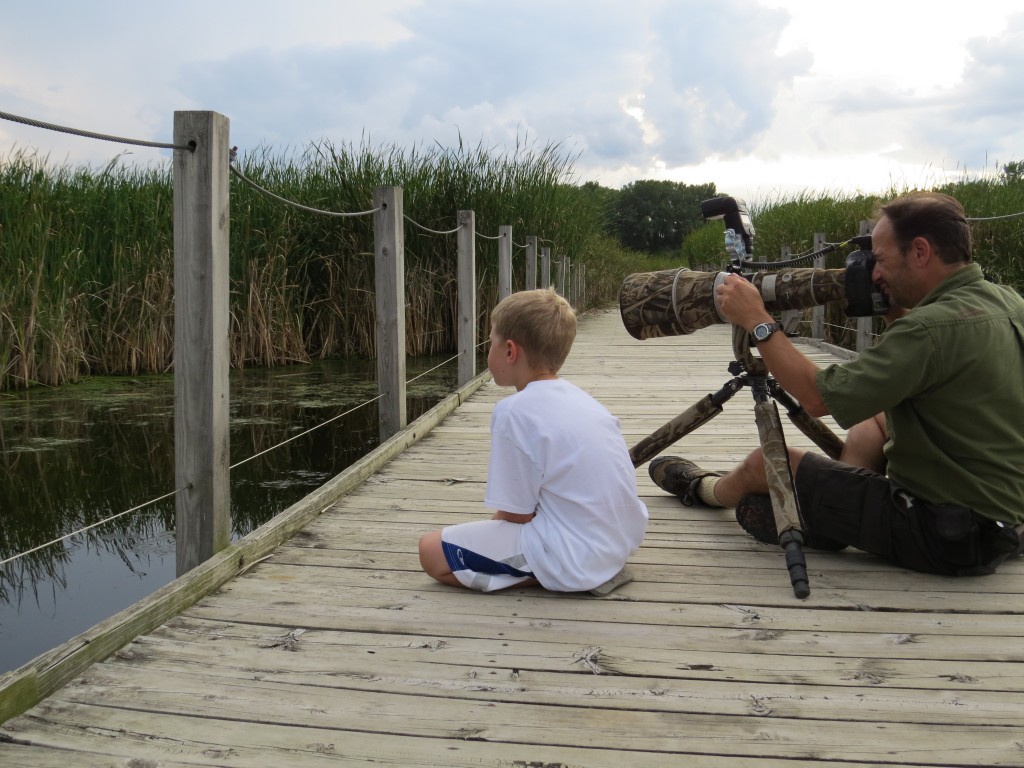 I recognized Stan’s name instantly but had trouble recalling where I had seen his name before.  Then I remembered a book from Evan’s library of field guides and nature books. 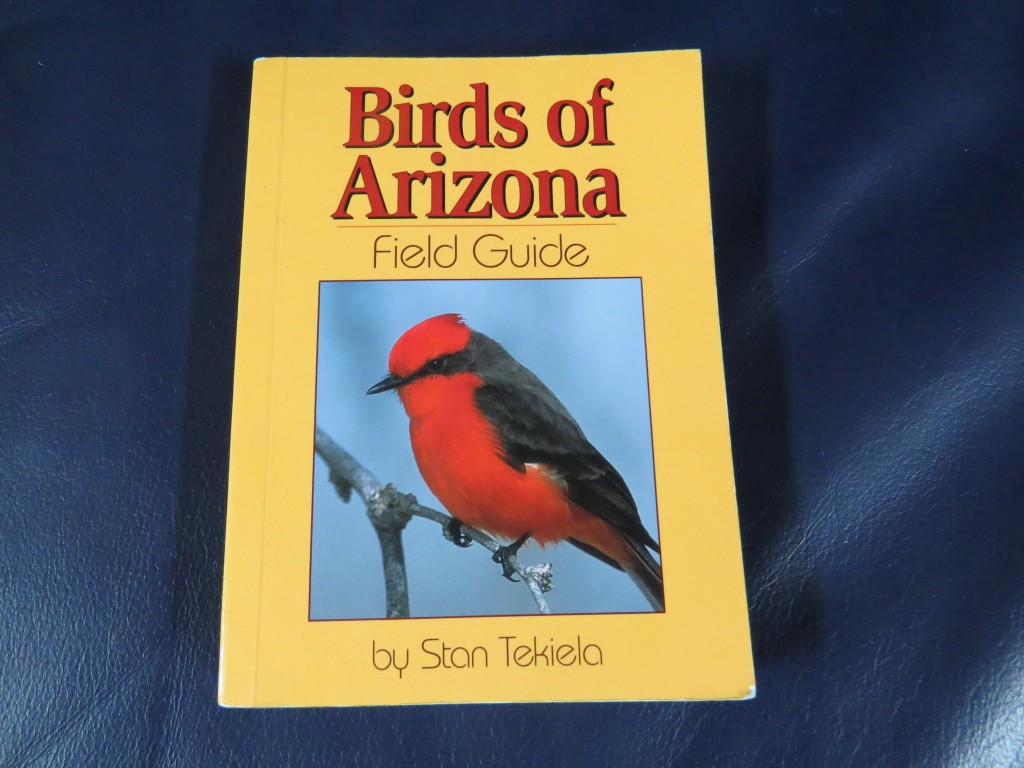 The lady birder implored me to take a picture of my kid alongside Mr. Tekiela.  The look in her eye and the tone of her hushed voice indicated this was a big, big deal – so much so that if she had a kid (which she didn’t) she’d definitely get a picture of the two of them together.

It was cool to bump into Mr. Tekiela.  But what was really neat was to listen in on the natural conversation between Mr. Tekiela and Evan about all things natural.  He truly was an educator who genuinely enjoyed sharing nature with others.  Here is a snippet of conversation I overheard:

Mr. Tekiela: “There’s another bird that looks like this that’s a lot bigger.”

Mr. Tekiela: “Do you know what it’s called?”

Evan: “The, uh, uh, American Bittern.  We’ve never seen one. We’ve only heard one at my Grandpa’s house.”

Mr. Tekiela: “Do you know what they sound like?”

Mr. Tekiela: “That’s right, that’s right! They are called the Slough-Pumper because they sound like an old pump pumping the water out of a slough.”

Mr. Tekiela was quite social and amicable with everyone around.  He and I visited for a bit and it came up that Evan had his field guide for Arizona birds. So we visited about Arizona and all his fascinating work in making field guides for that state.  He told me for the Arizona mammals book they had to trap all the smaller rodents and photograph them in captivity and then carefully replace each one in the exact same spot they found it in.  Another fun story he shared with us was a call he got from law enforcement in the Twin Cities area about an Eastern Coral Snake someone found in the Cities!  Mr. Tekiela never was able to relocate the snake, but he showed us a picture of it on his cell phone that the police had sent him.

It was a very fun encounter.  But weren’t we looking at a bird?  Our visiting never scared it off…maybe it was hanging around listening to Mr. Tekiela’s cool stories… 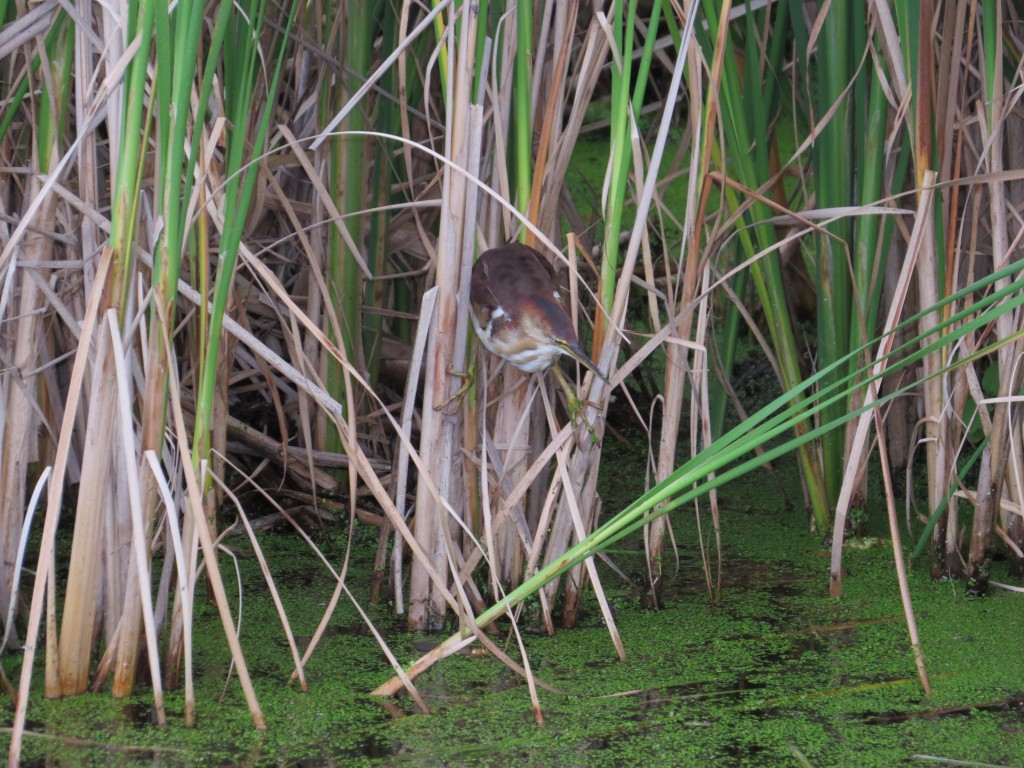 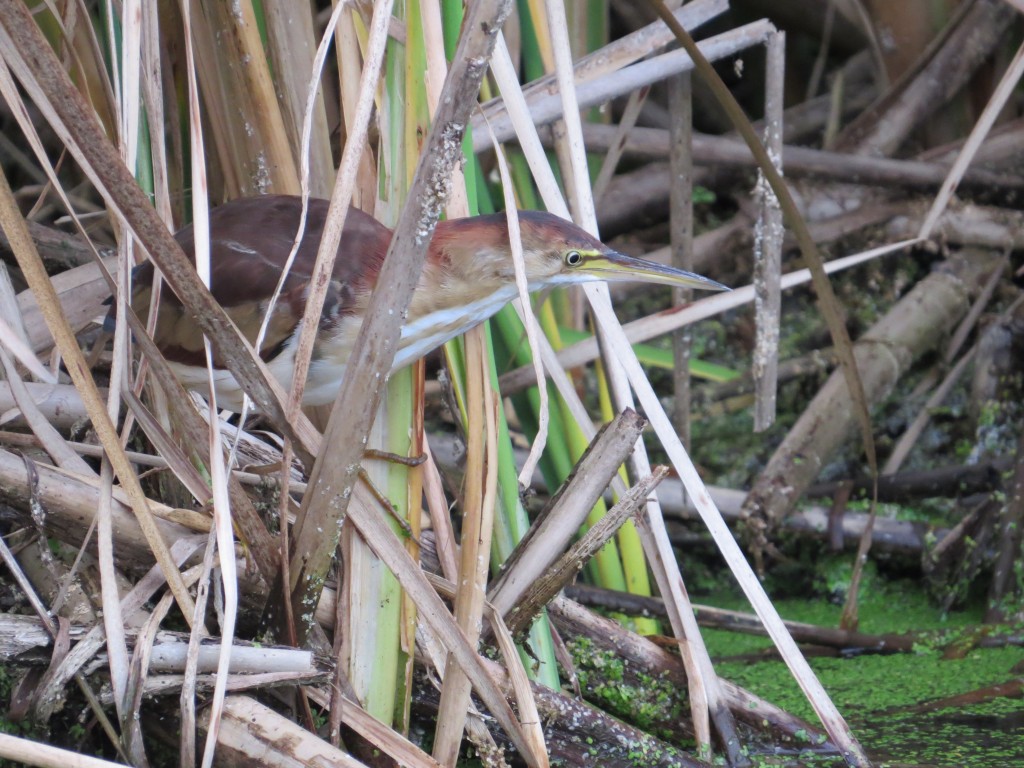 After dozens of Least Bittern photos which was still probably less than 5% of the number Mr. Tekiela had, we decided to keep walking the boardwalk to look for some of the abundant Virginia Rails people had been reporting.  Evan had never seen one, and I needed a photo.  At one point we were walking back toward where Mr. Tekiela was when he motioned wildly and whisper-yelled, “Evan, come here!”  We hustled up there just in time for Mr. Tekiela to point out a Racoon that was creeping out from the reeds and coming to the water’s edge.  Evan’s response was “Cool!”

After lingering a bit longer, the rain started to come down.  Evan and I took off running to join the girls and get back to the car as Mr. Tekiela chided, “C’mon, you fair-weather birders!”  We smiled back and kept running.  Once we were under the canopy of the woods and slowed down, I finally told Evan who he was birding and visiting with.  His eyes got as big as dinner plates.

It was one heck of a bird to end the summer with and one memorable birder encounter. That’s what I love about this game – you never know what will happen. And most importantly, everybody in the whole family had a genuine good time on this little outing.  It was the best way to wrap up the summer birding season.  It was perfect.