In any project there is inevitably scrap material left over.  Some pieces of lumber, fabric, etc. are just too good to discard, or more likely, the memories of long-gone, thrifty grandparents guilt us in to keeping these items.  So we pile our garages and closets full of such things until they can be re-purposed, which never, ever happens. Except for today. The trip up north yielded two solid projects with the Great Gray Owl adventure and the Golden-crowned Sparrow chase, but there were plenty of good birding scraps that I couldn’t waste.  In fact, they might even be worthy of being displayed on my 4th-grade science fair tri-fold that was stowed away in Grandma’s garage for decades.

Black-billed Magpie is a great northern Minnesota bird, and the Sax-Zim Bog is the furthest-east that it is known to breed.  Lately they have been popping up all over the Iron Range in the open agricultural areas.  I found four a couple months ago just a few miles from my parents’ house. This trip I saw one fly across my in-laws’ gravel road.  This was my best non-Great Gray Owl/non-Golden-crowned Sparrow sighting of the trip. I have traveled that road for almost 20 years and have never seen one there before.

This is flat-out one of the best hawks.  Many migrate through Minnesota during late fall, and since we’ve been birders I have seen them every time we visit up north this time of year.  I am now starting to associate Thanksgiving with this bird instead of the turkey.  Anyhow, just moments before that Black-billed Magpie, I got my best-ever look at a gorgeous light-morph perched on a power pole by the road.  We were on our way to a family gathering so I didn’t have time to stop and photograph it.  I did drive real slow when I went by, and that hawk and I locked eyes while it pivoted its head watching me when I went past, just like an owl would do.  Super-cool.

This bird was seemingly everywhere on the trip.  I bet I saw over two dozen in various places.  My sightings occurred exclusively as birds getting grit from the middle of roads.  Anytime I stopped to get a photograph, they would split. Though I have seen gobs of these things on feeders long before I was a birder, this bird has eluded my camera since I got into birding.  There was that one crummy cell-phone pic a couple years ago.  I guess this one is a step-up.  FYI – rolling down the windows of a toasty vehicle and then immediately taking pictures in the cold does not work; the heat waves from the car create interference in the picture.  Instead, keep the windows down a bit as you roll along or turn down the heat. 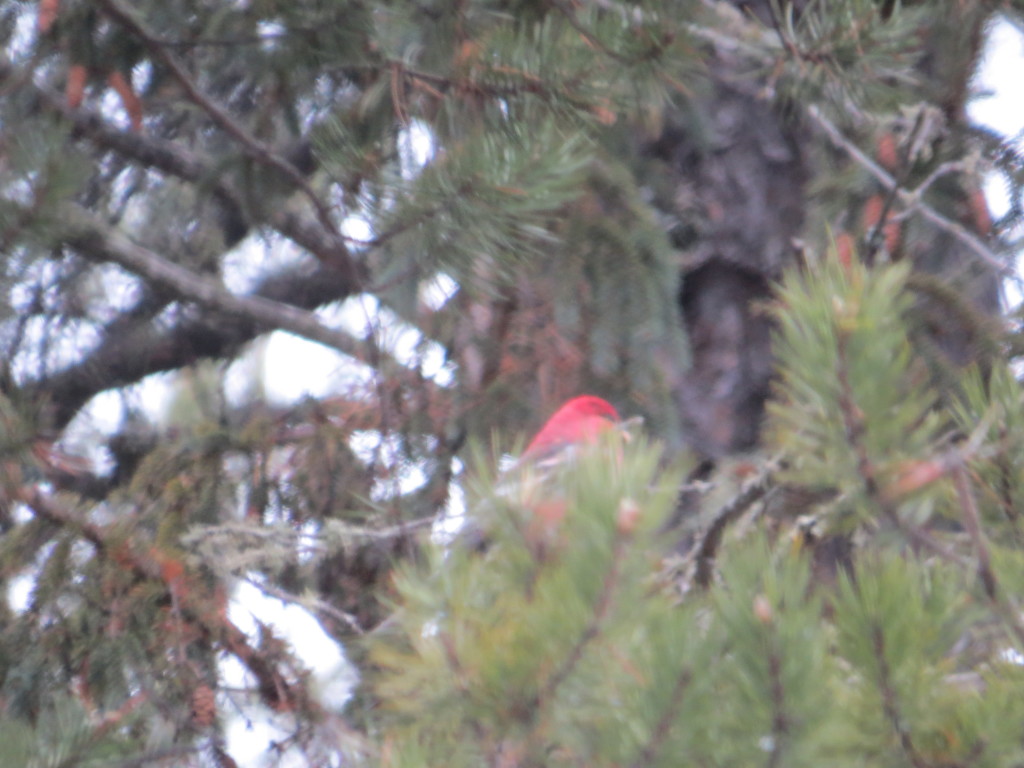 What birder doesn’t love a shrike of any stripe?  Fall is the time when the Northerns replace the Loggerheads.  Unlike the rare Loggerhead, the Northern Shrike is not terribly uncommon anywhere in the state during the winter.  I found two when I drove through the Sax-Zim Bog on my way home from Duluth. 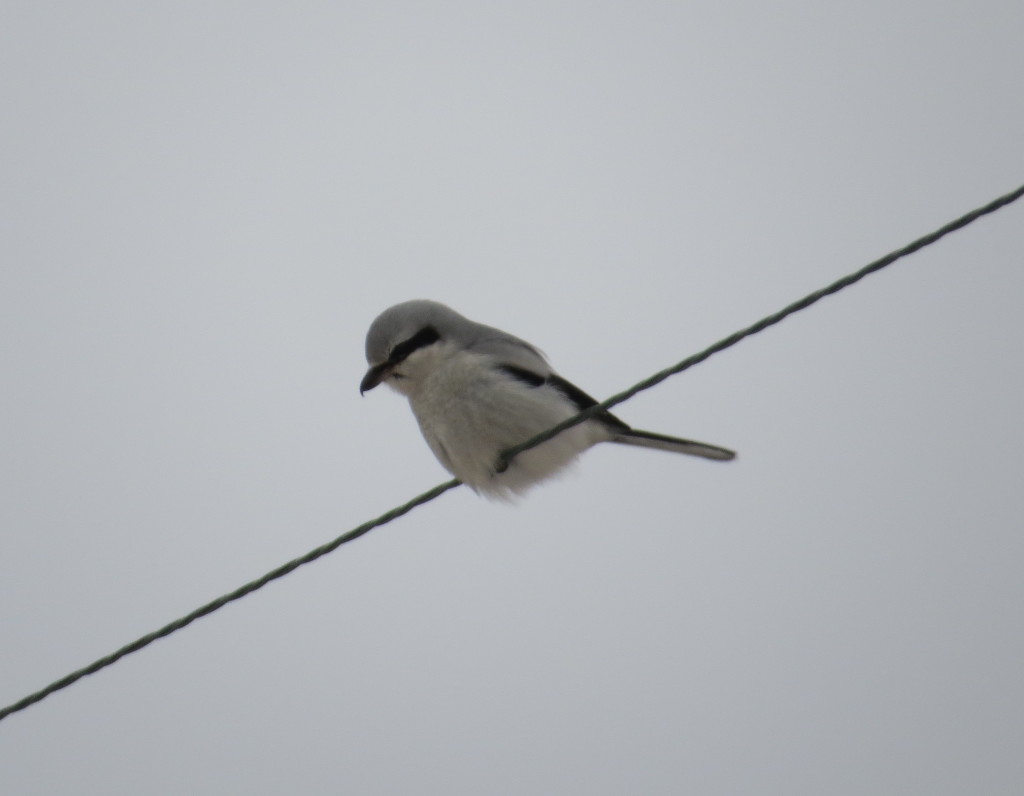 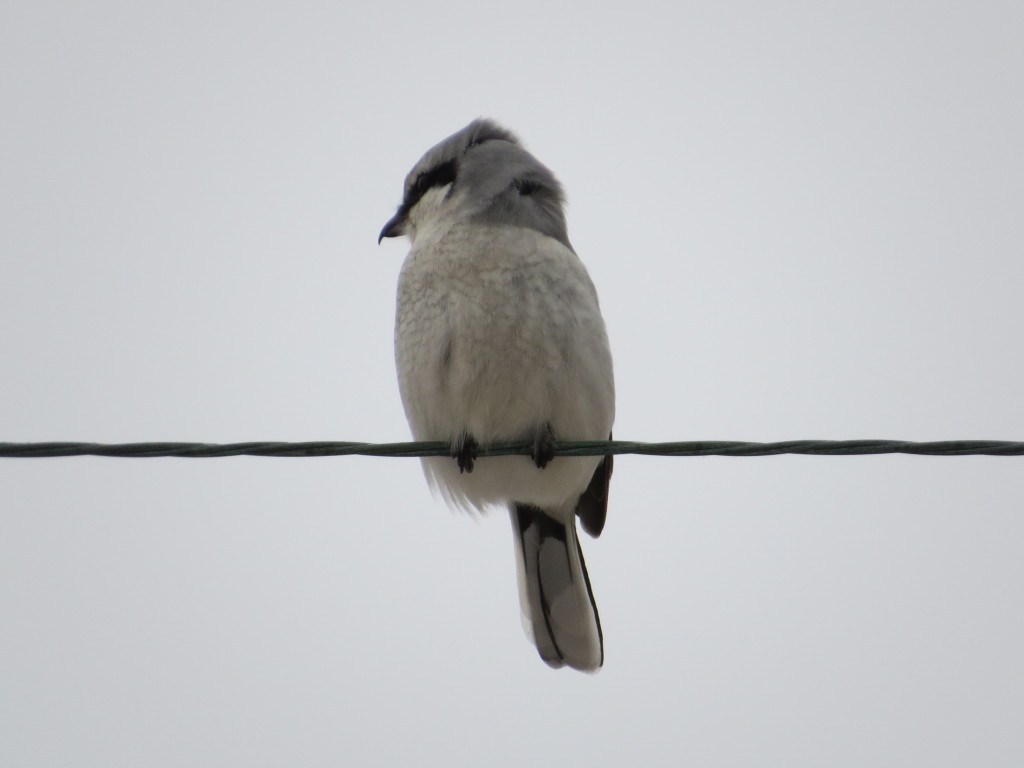 Ruffed Grouse – aka “grouse” to Minnesotans at large, aka “partridge” to Iron Rangers

We went to Melissa’s Grandma’s house on Turkey Day.  This is always a fascinating place to do some birding while eating Grandma Evelyn’s delicious food and sipping some coffee.  Pine Grosbeaks, Evening Grosbeaks, a Great Gray Owl next door.  You know, the usual stuff.  Knowing this, I walked up to the house with my camera in hand, eager to see what goodies were on Evelyn’s feeders.  A large bird at the top of a birch tree immediately caught my attention. 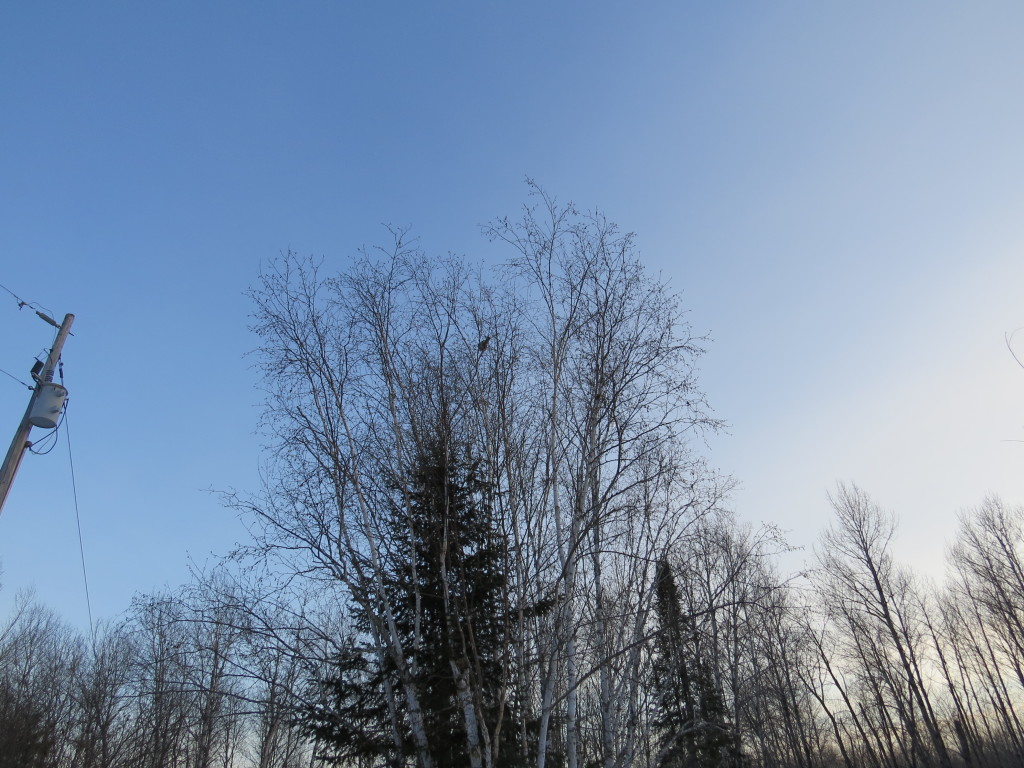 It was a grouse! Grouse in northern Minnesota are practically as common as chickens in a barnyard, but it was fun to see one so tame and without a care in the world other than stuffing his crop with all the birch catkins he could eat.  Apparently he knew he wasn’t the bird of choice on this day and was safe from those who craved poultry. In fact, I walked all around the tree right underneath him while he busily ate the catkins. 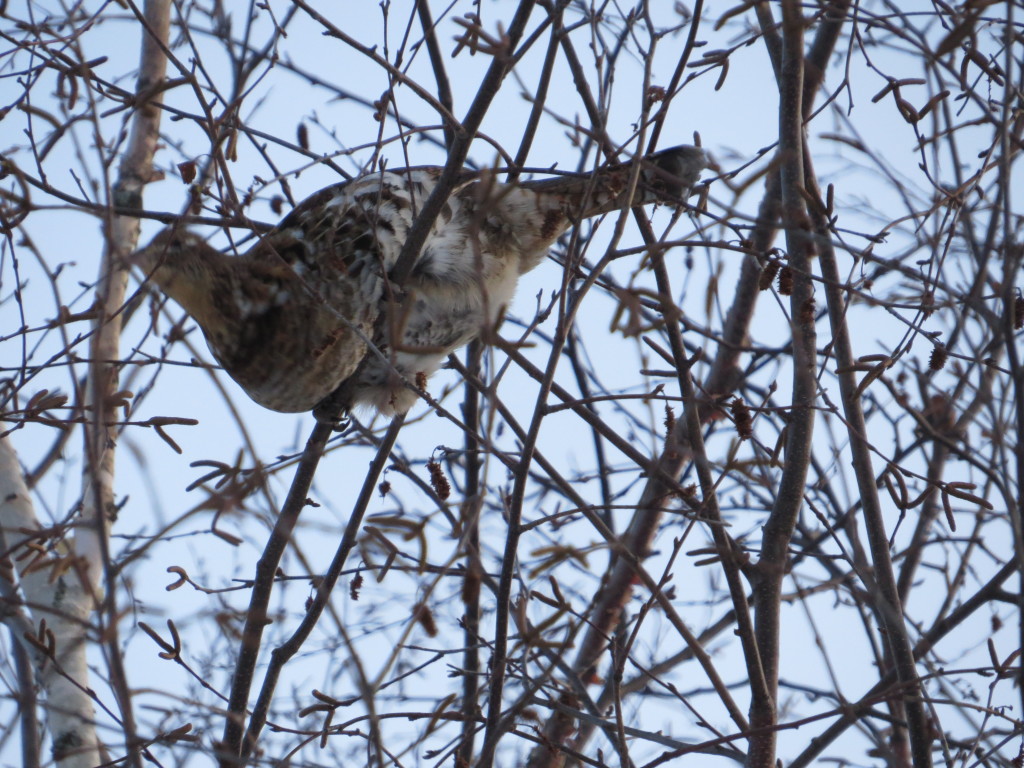 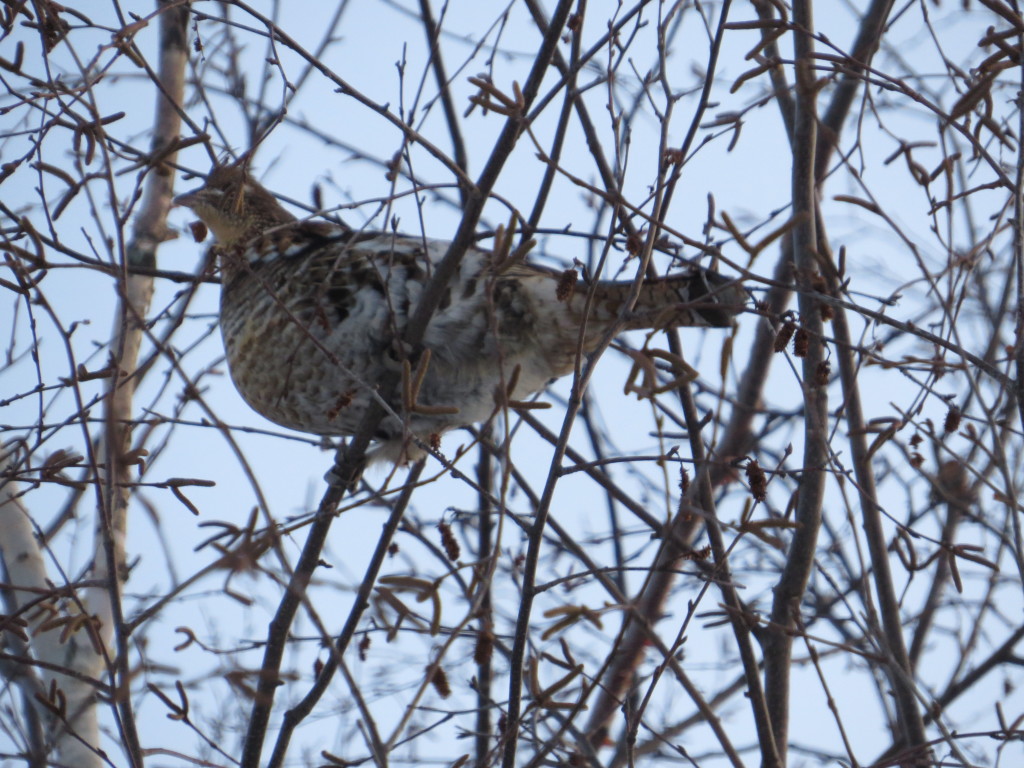 This was a real treat to be able to photograph this bird so close.  The Ruffed Grouse has been a favorite bird of mine ever since I was a 13-year-old kid and had one flush across a wooded path right in front of me, and then it strutted on a log.  One thing I particularly enjoyed about this grouse at Evelyn’s house was its long, red-phase tail.  The long tail indicates that this is a male.  Ruffed Grouse tails come in a gray phase or a red phase with a lot of variation in between.  Most of the birds I see are gray phase. Here is a sample of this variation from Gordon Gullion’s The Ruffed Grouse. Gullion states that there are up to 30 color variations in the tails and provides loads of statistics on the rarity of the different types.  The best tail feather I ever found as a kid was a gray-phase tail with an orange sub-terminal band instead of the traditional black. 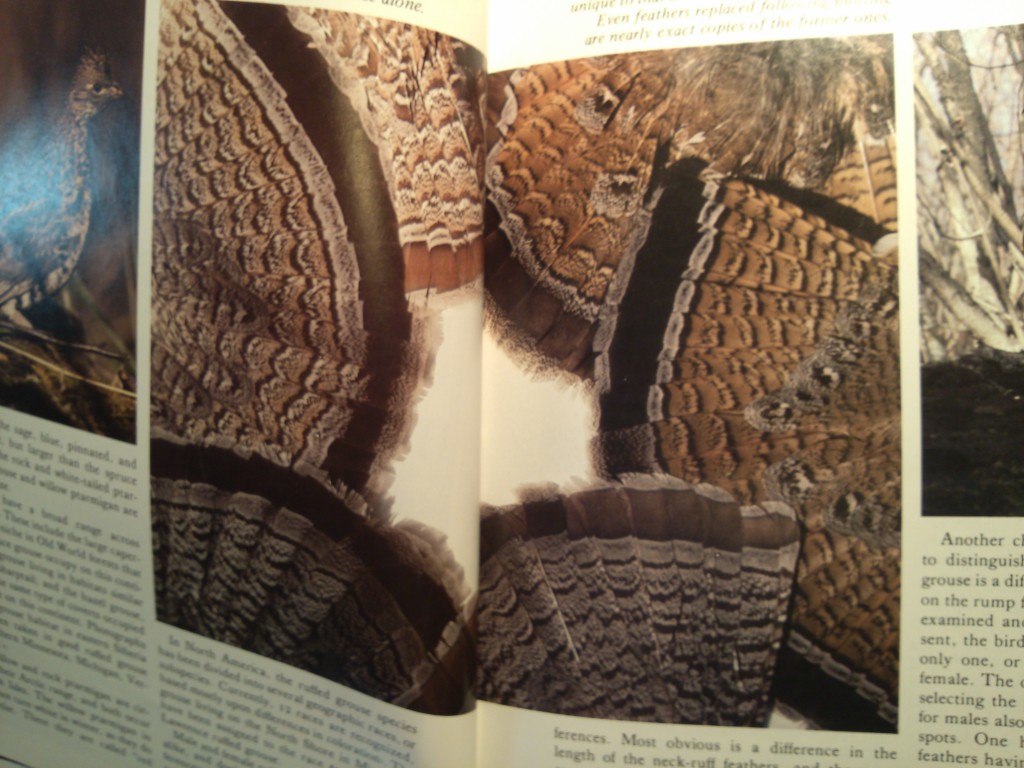 Fun fact from Gullion’s book: It is well-known that Ruffed Grouse completely burrow into powdery snow to keep warm on cold winter days.  However, what is not well known is that the Great Gray Owl is the only known predator that can hear the grouse in their burrows and pluck them out of the snow!  How cool is that?! Here I thought Great Grays just ate small rodents.  As Gullion says, it’s fortunate for Ruffed Grouse that Great Gray Owls are not very numerous in northern Minnesota.  If I ever witnessed such predation, I might have to hang up my binoculars and camera because it just wouldn’t get any better than that.  Fortunately, Evelyn’s grouse doesn’t have to worry about such things yet with low snow totals.  But he sure looks plump for the pickin’. 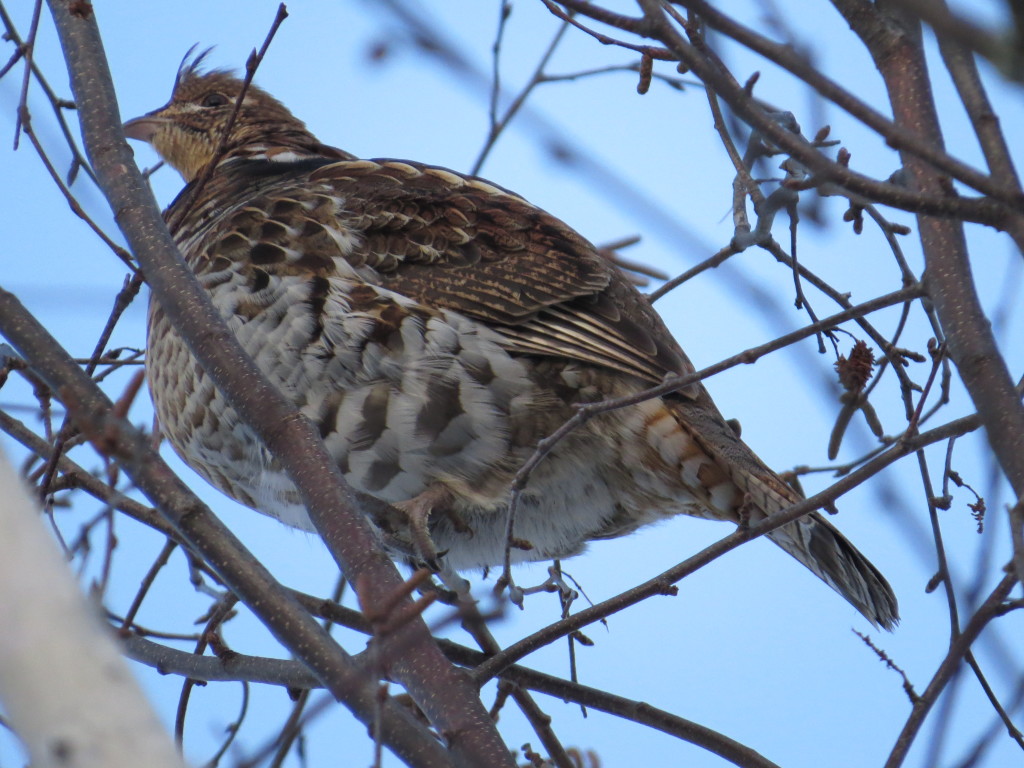