A lot of fascinating bird reports have been pouring out of Grant County which is just a little more than an hour to the northwest.  The biggest news that came last week was a confirmed nesting pair of Black-necked Stilts.  These stilts normally reside in the souther reaches of our country and rarely stray into Minnesota, let alone nest here.  So as people were going to check out this historic find, they were turning up other good birds like Black-crowned Night Herons, Cattle Egrets, and Loggerhead Shrikes.  And just yesterday another southwestern bird popped up within 10 miles of all this action, the White-winged Dove!

Randy invited us to go a field trip to Grant County.  The big attraction for Randy was the White-winged Dove which would have been a new state bird for him.  The dove was just one of many phenomenal birds I was interested in.  Needless to say, we accepted Randy’s offer.  Evan and I were up at 4:30 this morning so we could get up to Grant County to wait at a fellow birder’s feeders for the White-winged Dove to make an appearance.

As we drove we encountered a brutal rainstorm, but we were confident that the forecast of scattered storms would allow us at least some weather-free moments to check on these birds.  Finally we got to the site of the dove which was a farm place down a half-mile long driveway and tucked inside a densely wooded yard. It was not what I expected. I figured we’d be able to park our car and just watch a feeder, but the feeder was on the back side of the house.  The only way to view it was to walk around the house or look through the house’s windows. We decided to creep around the house.  Randy led our silent single-file procession.  Immediately he said, “On the feeder right now.” Wow, that was fast!  The bird then flew up into a tree posing nicely for spectacular views. 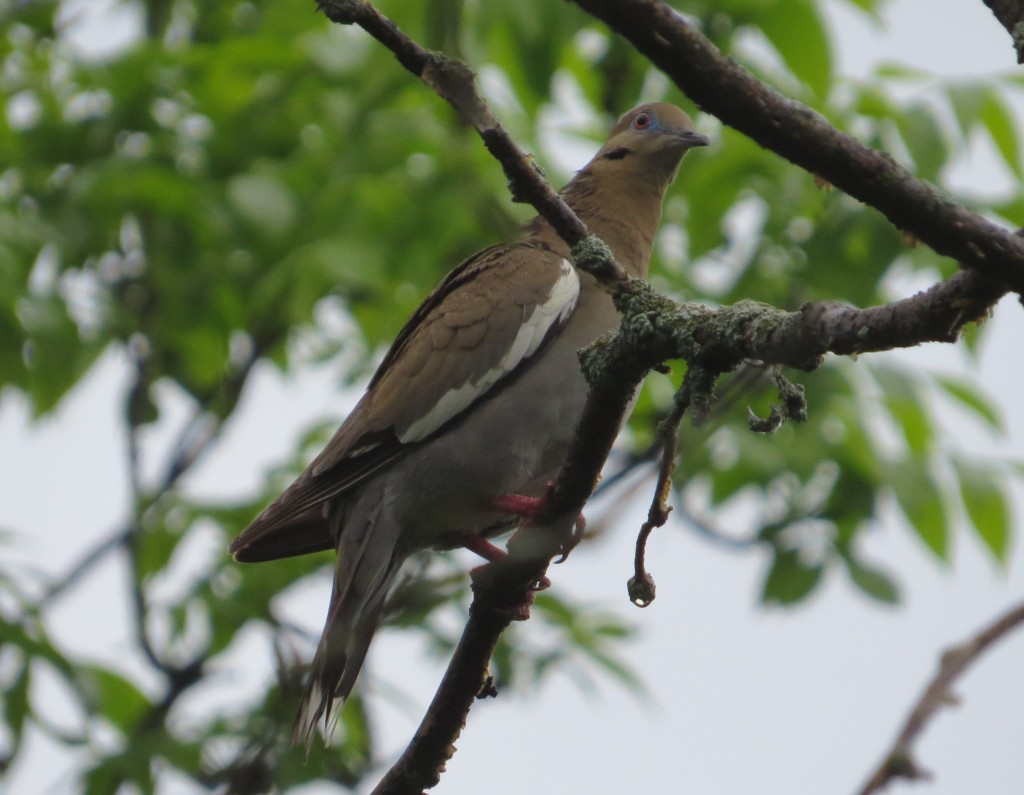 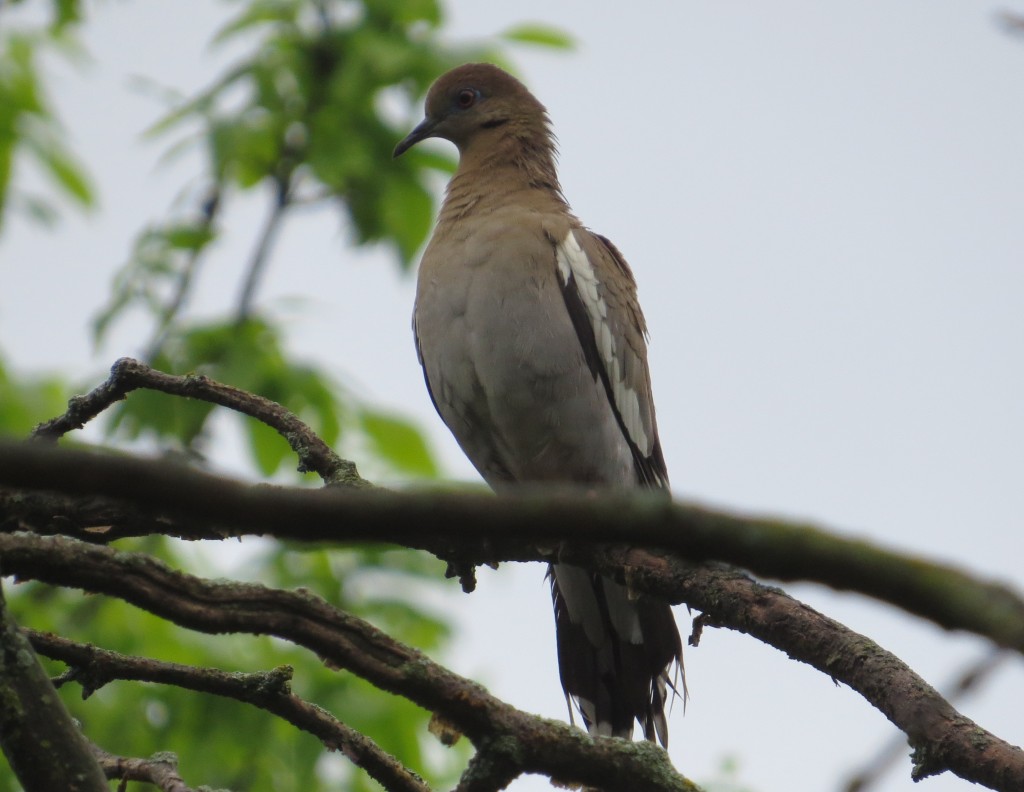 After our lightning-fast, dynamic sighting, we knocked on the door to thank Charlene, the birder and homeowner who made this amazing discovery.  Charlene was the epitomy of Minnesota-nice, offering us coffee and donuts and showing us a plat book and telling us where to find other great birds in the area.  It’s always a pleasure to meet a friendly birder in the field.

Next we were on to the North Ottawa Impoundent, which is a 2 mile by 0.5 mile rectangular pool used to provide flood relief for the Rabbit River, Bois de Sioux River, and Red River.  Before we got there, though, there were many good birds to see, like the abundant Bobolinks. 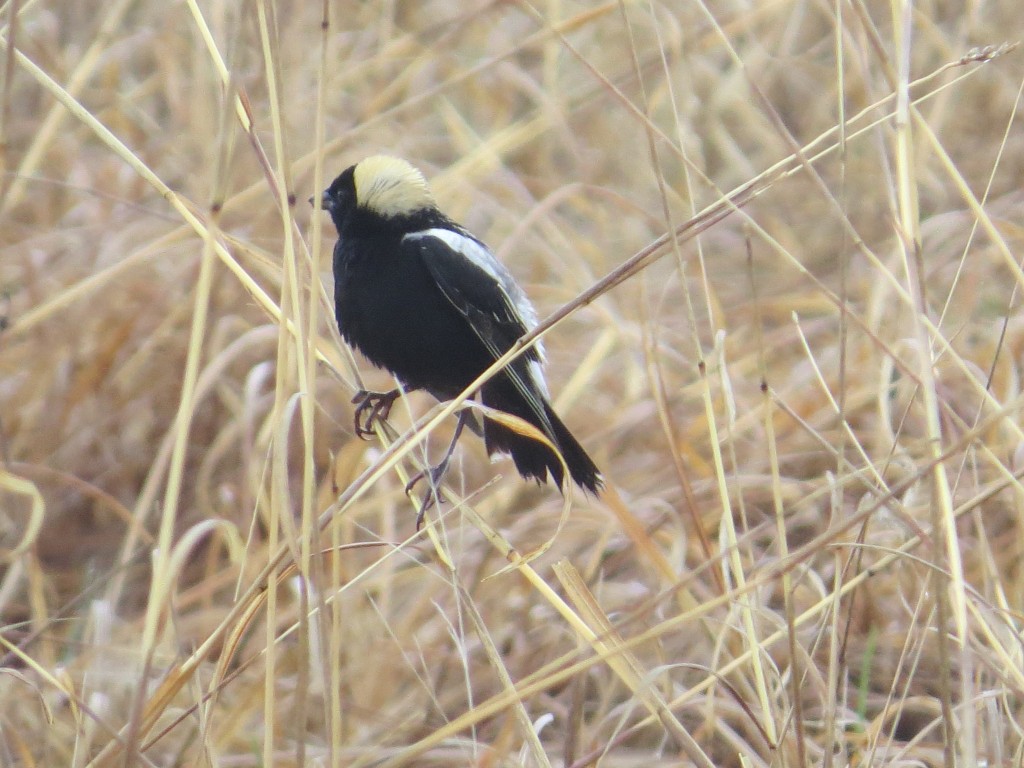 The North Ottawa Impoundment was an attraction for me because of the reported Black-crowned Night Herons and Cattle Egrets, both of which would be lifers.  When we got to the impoundment, we immediately saw numerous Great Egrets.  We kept hoping one of the white birds would be our nemesis Cattle Egret.  Eventually Randy spied the two Cattle Egrets that had been reported.  Finally!  It was quite a thrill to now gain two life birds from this field trip. 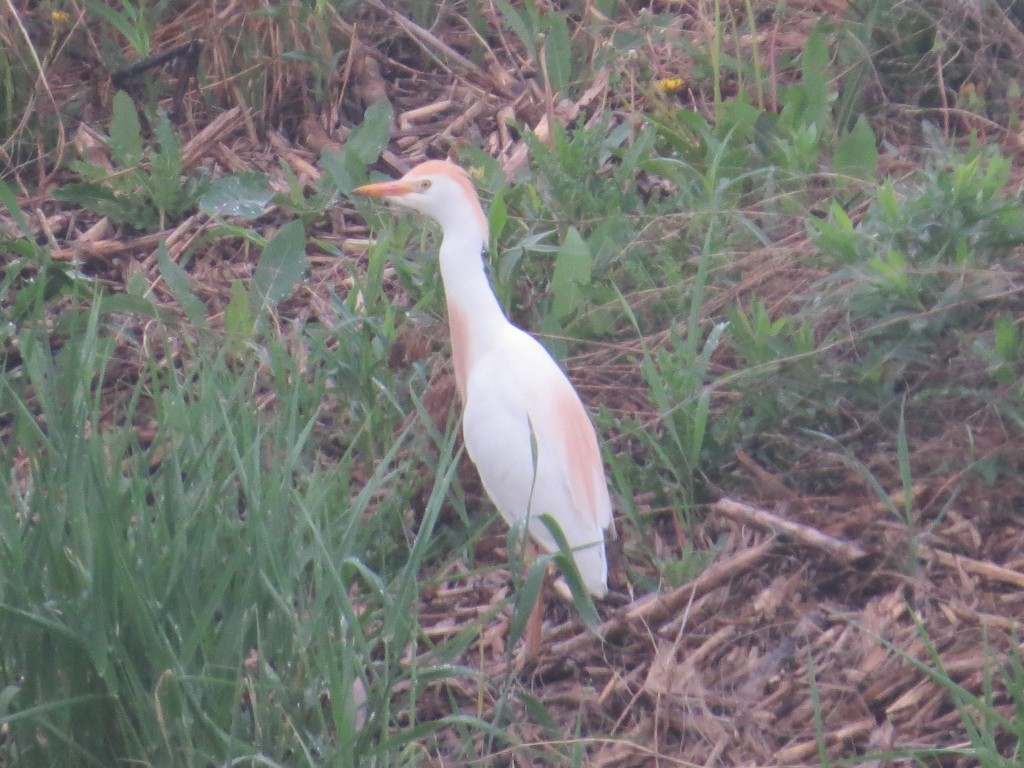 These egrets were quite shy and did not give many photo opportunities.  The following picture was fun because it clearly shows the size comparison with the Great Egret, and clearly there is no comparison. 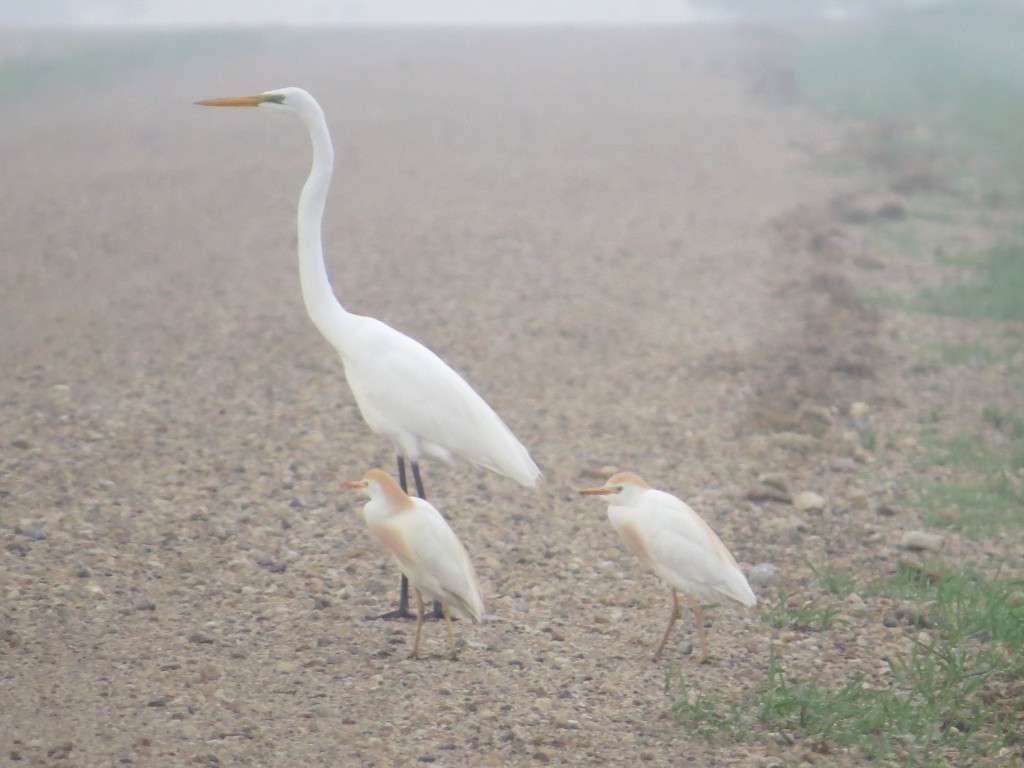 Driving around the impoundment was a magical experience.  There were cool birds everywhere.  I guess while I was out of the car trying to photograph these egrets, Randy found an Upland Sandpiper.  Additionally, there were hordes of ducks with other goodies mixed in, like numerous Eared Grebes, a Red-necked Phalarope, and a Wilson’s Phalarope. Taking a short walk allowed us to get good looks at many of these birds. 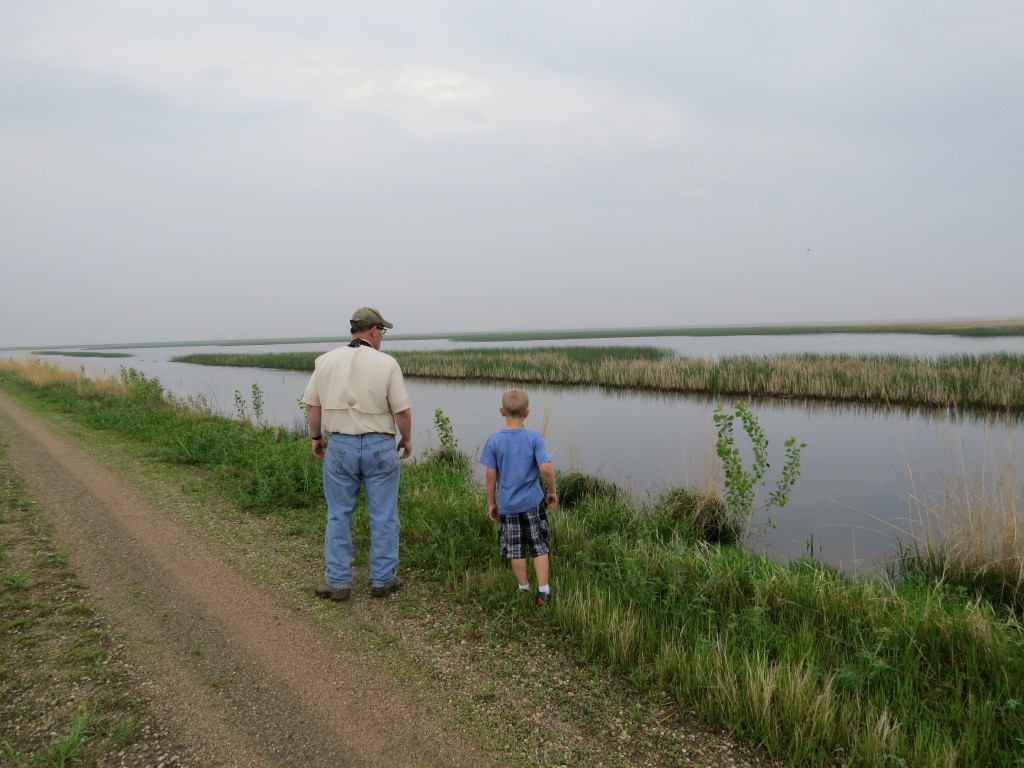 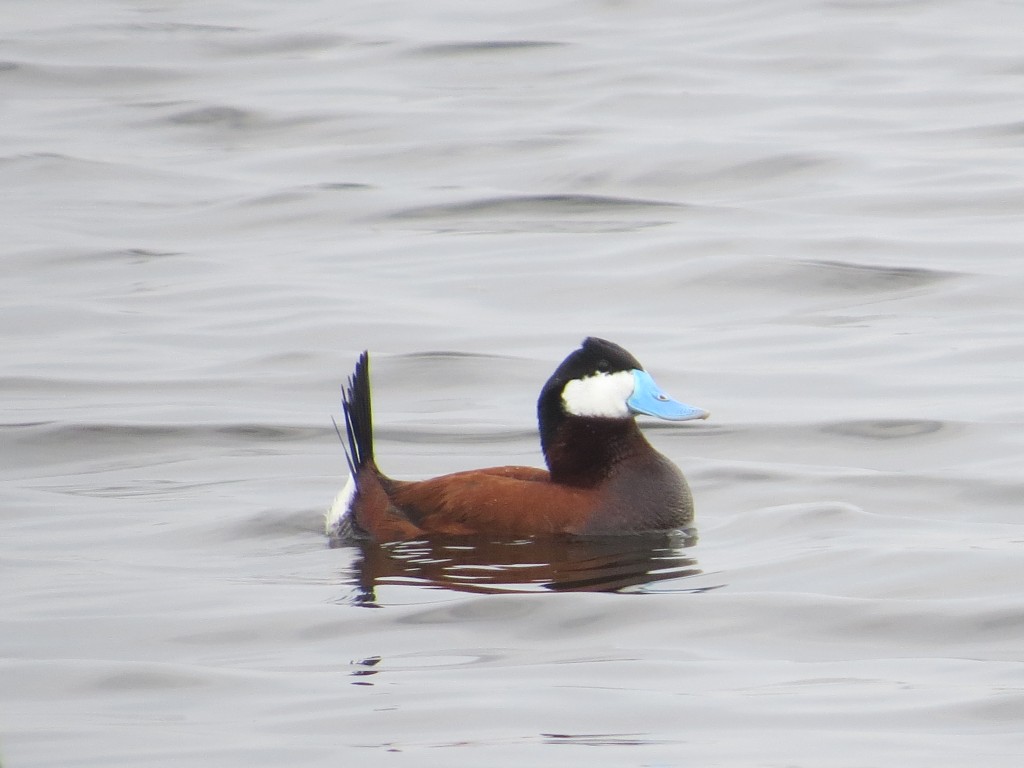 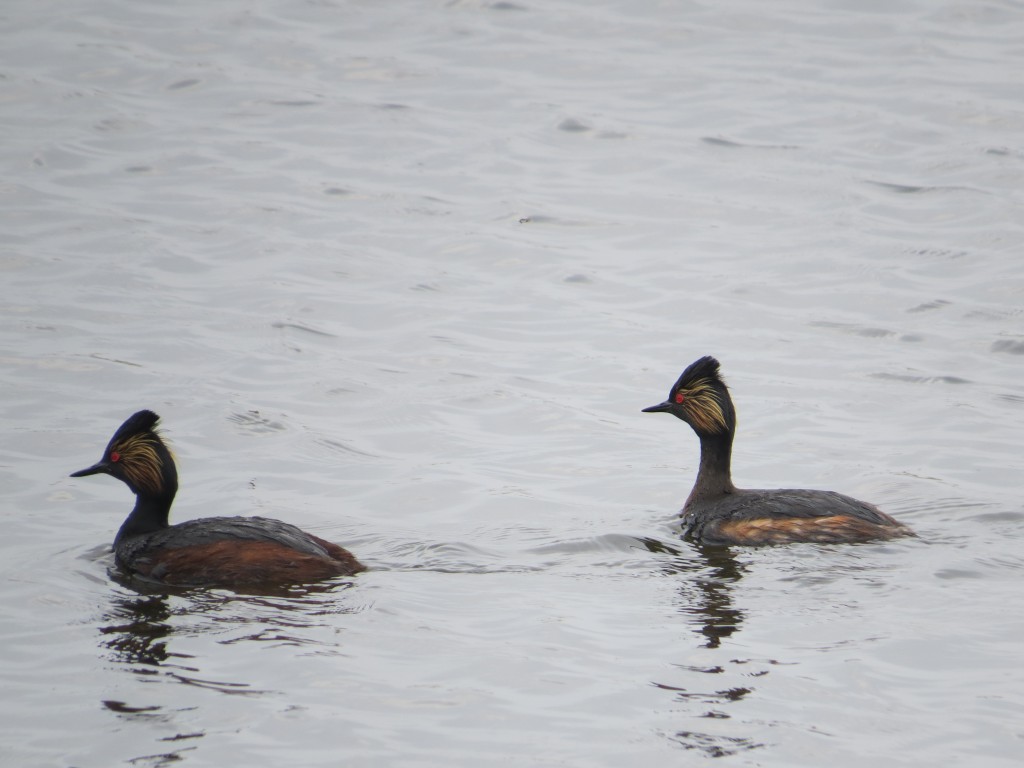 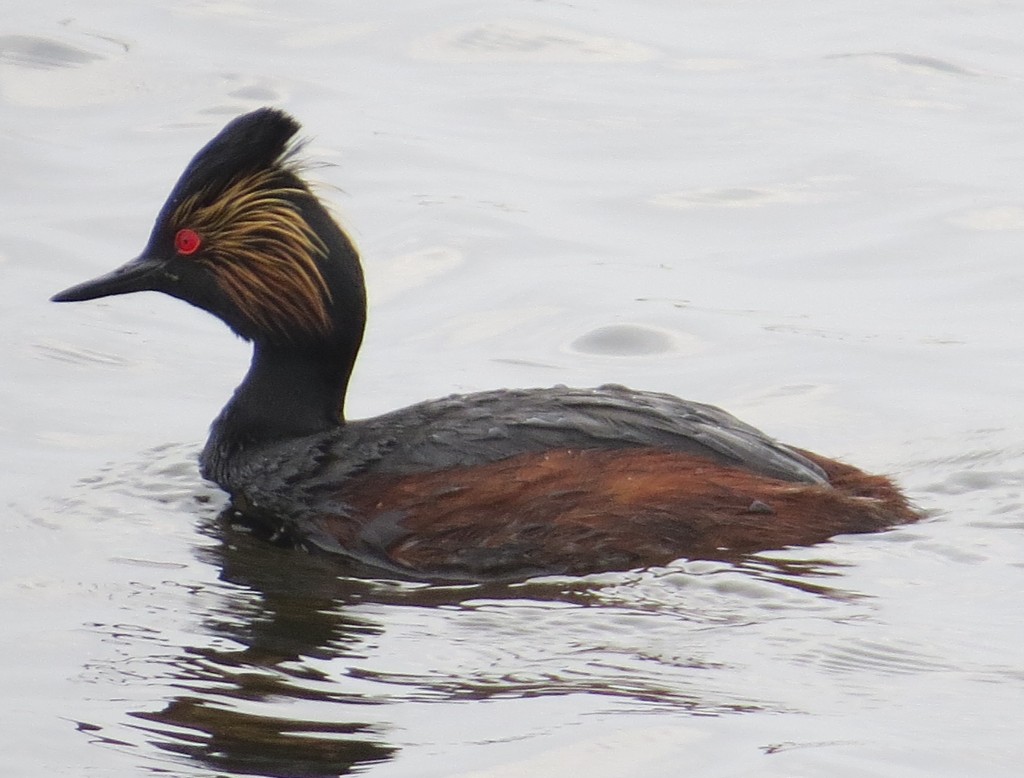 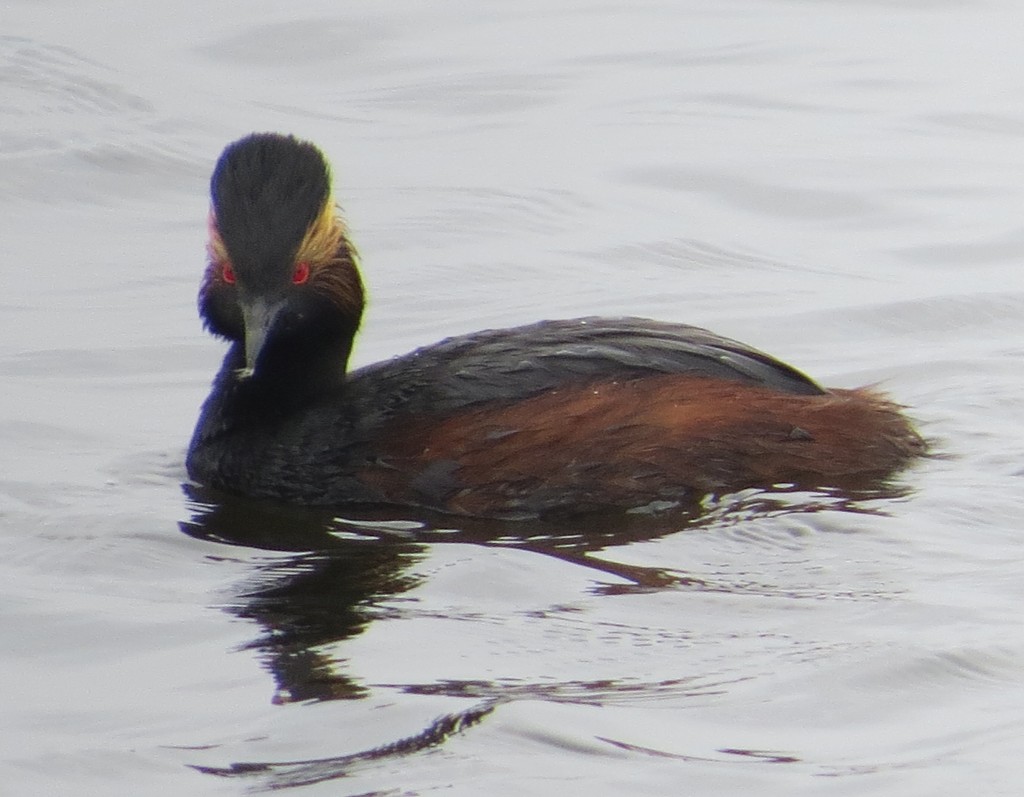 As much as we tried we could not turn up a Black-crowned Night Heron.  I guess we can’t win it all, plus there was still more good birding ahead.  Our next stop was the sewage ponds at the city of Herman where two Black-necked Stilts have decided to nest. Because of the work of some dedicated birders who brought this to the city’s attention, the city has agreed to not mow around this pond until the birds are done nesting.  In fact, the townsfolk are pretty excited over the hub-bub at their local sewage ponds.

A nesting bird is easy to find.  It is about the only guarantee there is when it comes to finding a bird.  We were able to see both of the adults today.  It was not a new bird as we saw them in Arizona a couple months ago, but it is a really fun bird that was a treat to see not far down the road from us. 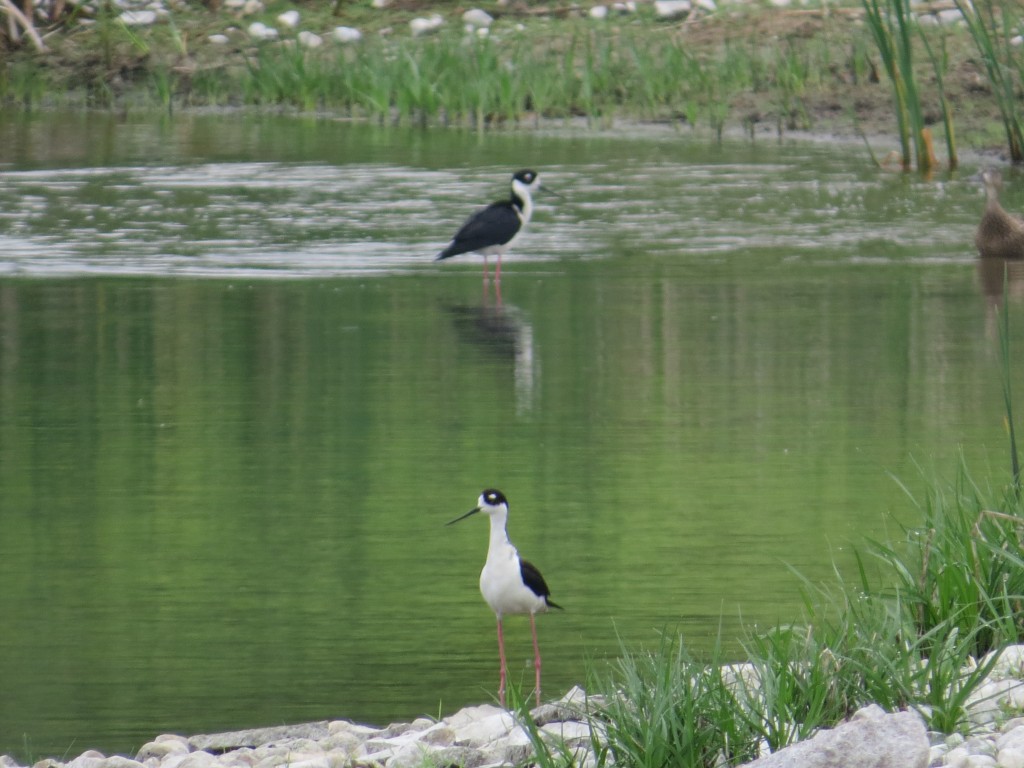 You didn’t need any special optics to see these birds well, but an up-close view makes a good sighting even better. 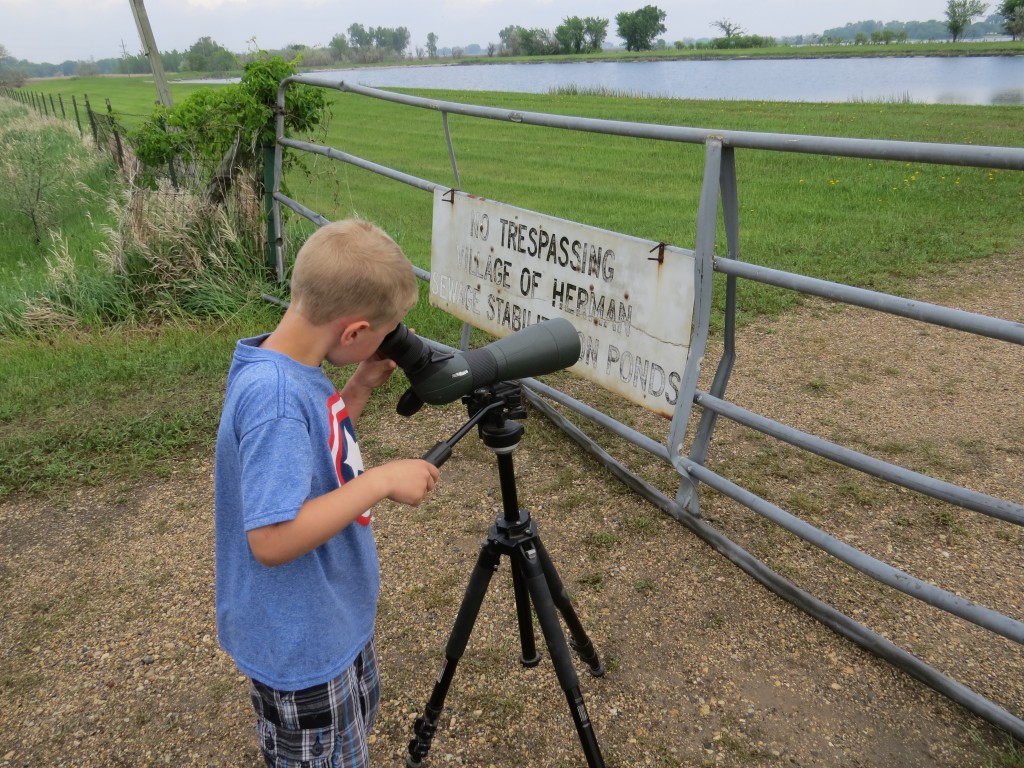 It was fun to see the female sit on the nest which has one confirmed egg. 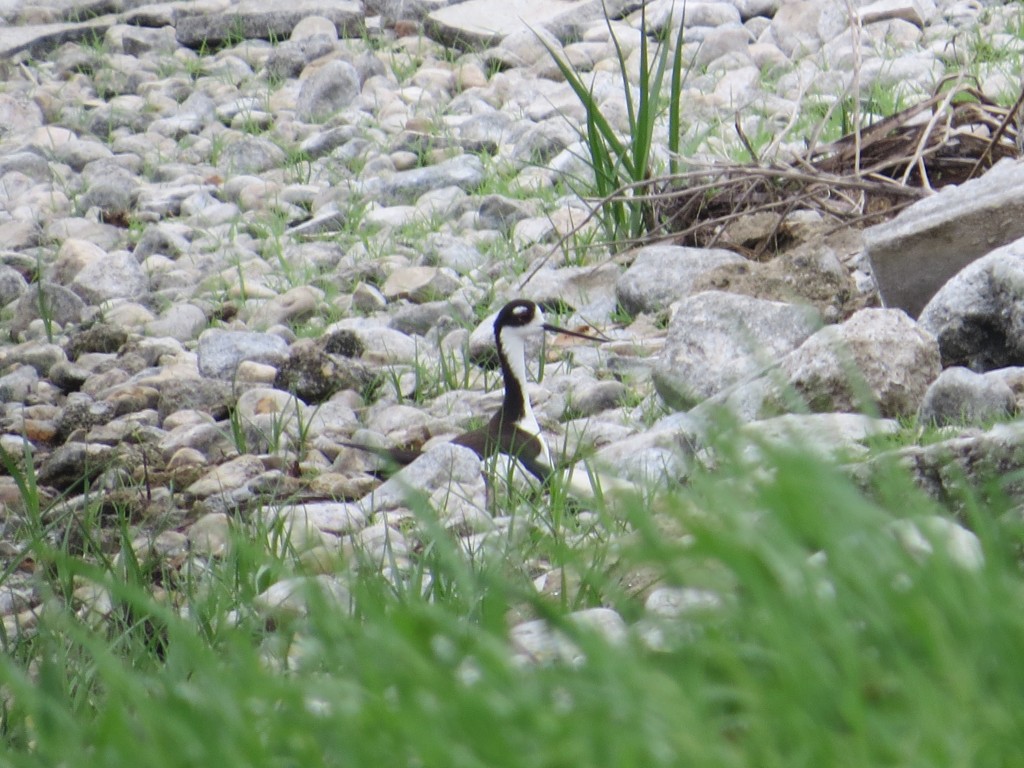 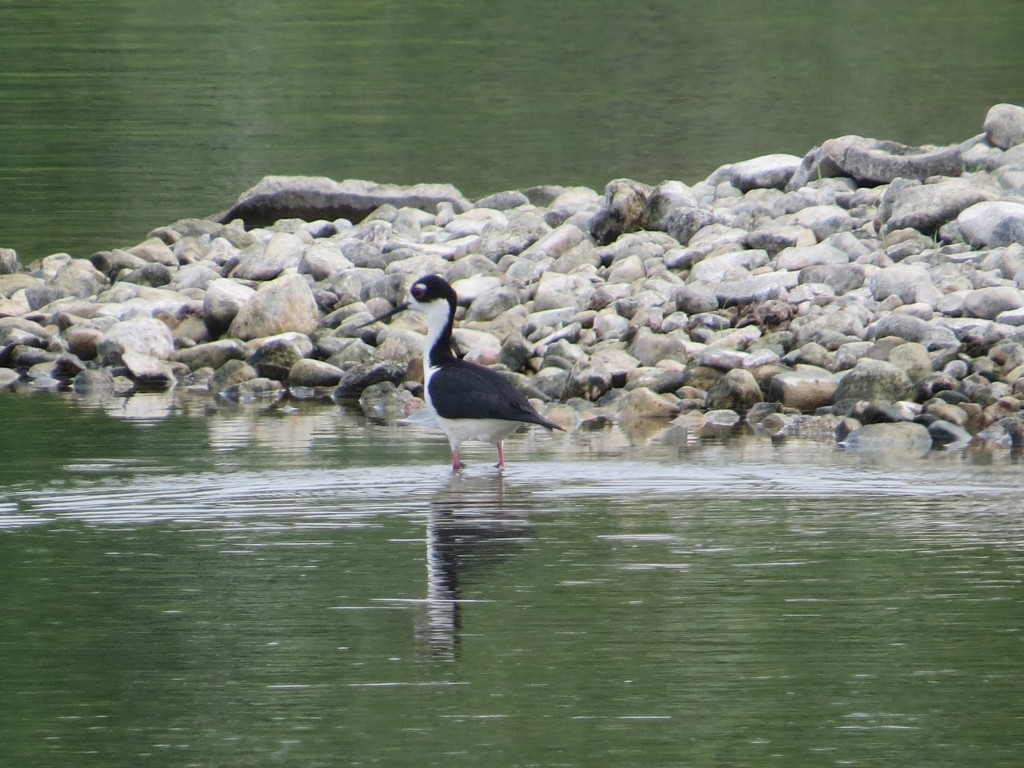 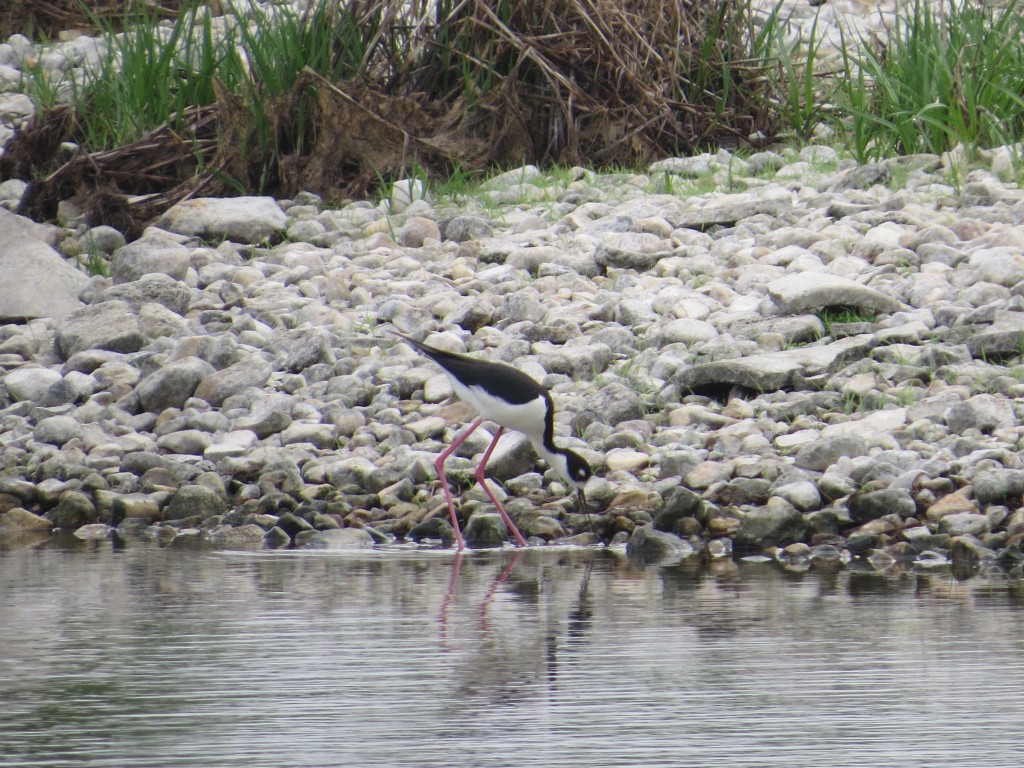 Black-necked Stilts – a most appropriate name 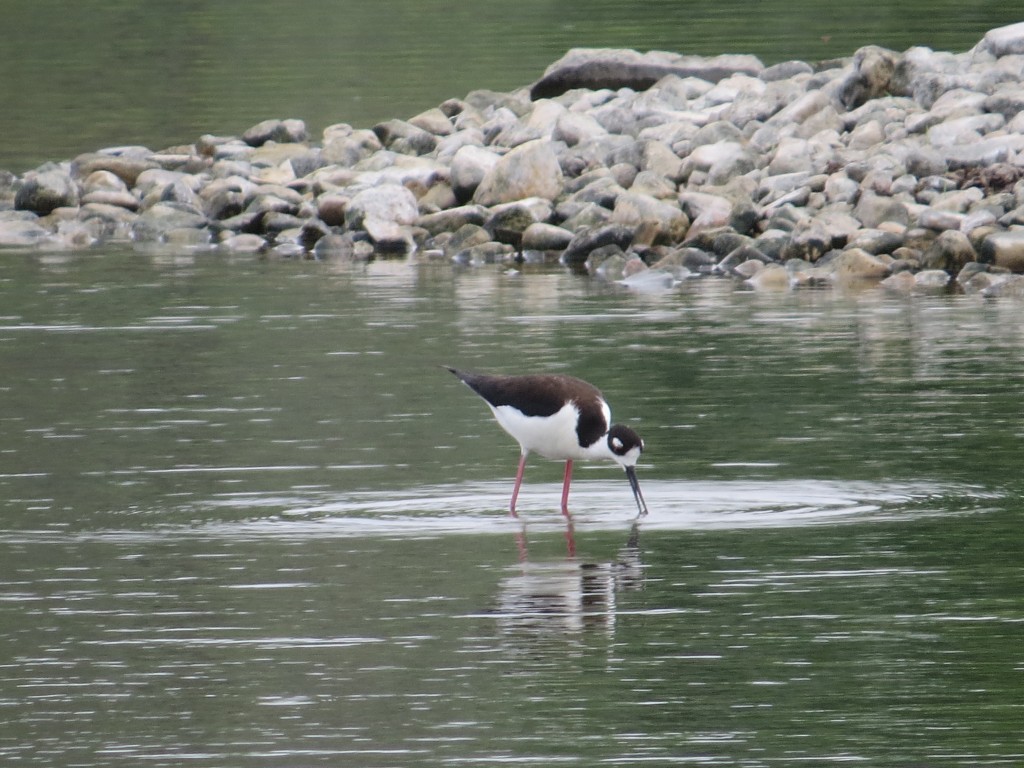 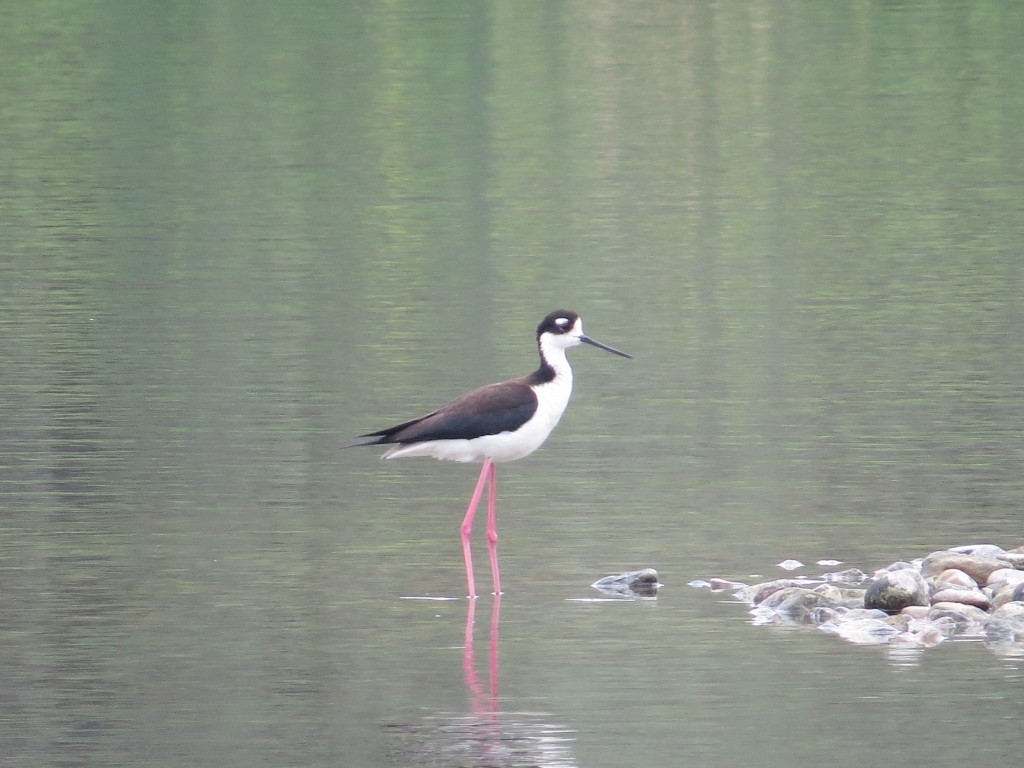 After the ponds we decided to see if we could find the reported Loggerhead Shrike just north of Herman.  We couldn’t find it on our way to see the Black-necked Stilts.  The second time was the charm, though, as Charlene’s parked vehicle on Hwy. 9 and pointed binoculars alerted us to its presence.  In addition to her own rare yard bird, she was keeping tabs on all these other incredible finds within 10 miles of her home.

It’s always fun to see a shrike, but Loggerheads are rare in Minnesota, so they are extra special. 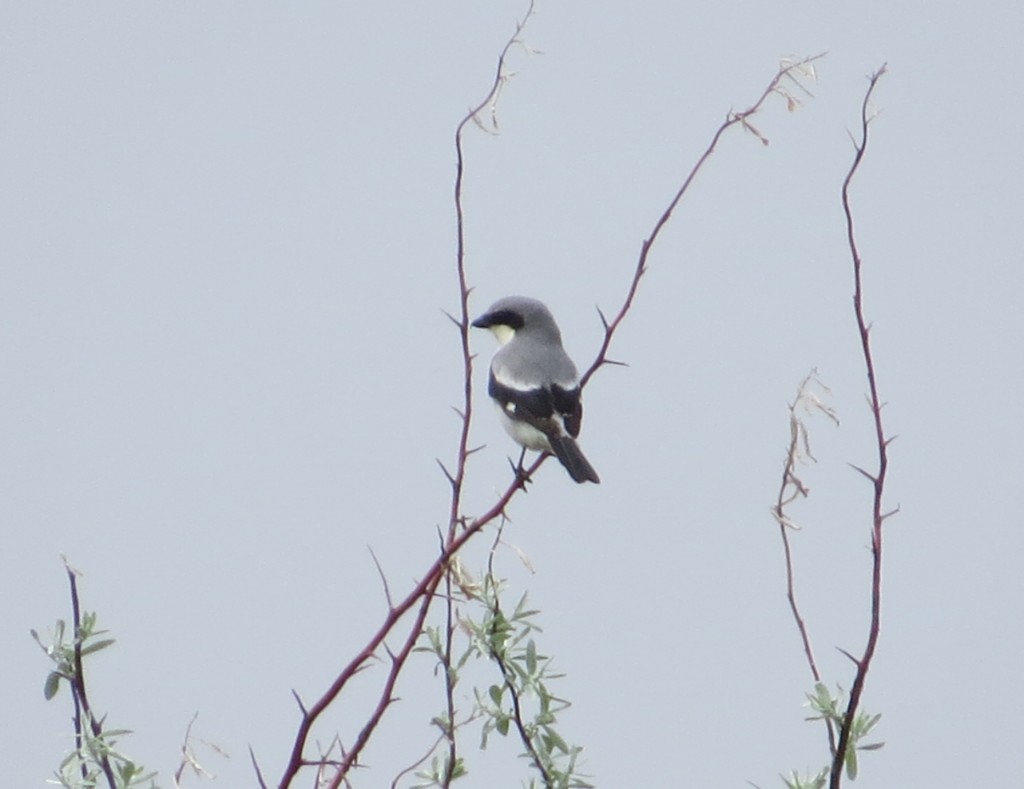 And with that last sighting, it was time to head home.  What a phenomenal day of birding it had been. Two life birds, a host of uncommon birds, and great company are tough to beat.  It was one of those big birding days that will stand out for a long time in our memories.  After all, how often will can a birder see a White-winged Dove and a Black-necked Stilt on the same day in Minnesota?