After our brief visit to the Badlands and Black Hills, we were headed south to the Colorado Springs area where we were going to meet up with two of my cousins that I hadn’t seen in years. The fastest way to the Springs was to shoot down through Nebraska, but common sense prevailed and we opted for a slightly longer route that would take us down through Wyoming. We were in the west after all; we might as well see some of it and tally a new state for the kids.

The beauty of the Black Hills and the Oglala National Grasslands in western South Dakota continued to amaze us.  And the birds were pretty great too.  At one point, three Black-billed Magpies flew across the road.  Good birds but nothing new.  Lark Buntings continued their ubiquity along the fencelines of Oglala.  I also spied a Common Nighthawk perched on a fence post.  I almost hit the brakes for that photo op, but I couldn’t risk being late in the Springs, and one must limit the number of birding emergency stops for fear of making the non-birding family members weary.

Instead I spent one of my limited emergency birding stops on this guy – the Ferruginous Hawk!!  A spendid and thrilling life bird indeed, a birder’s hawk for sure. 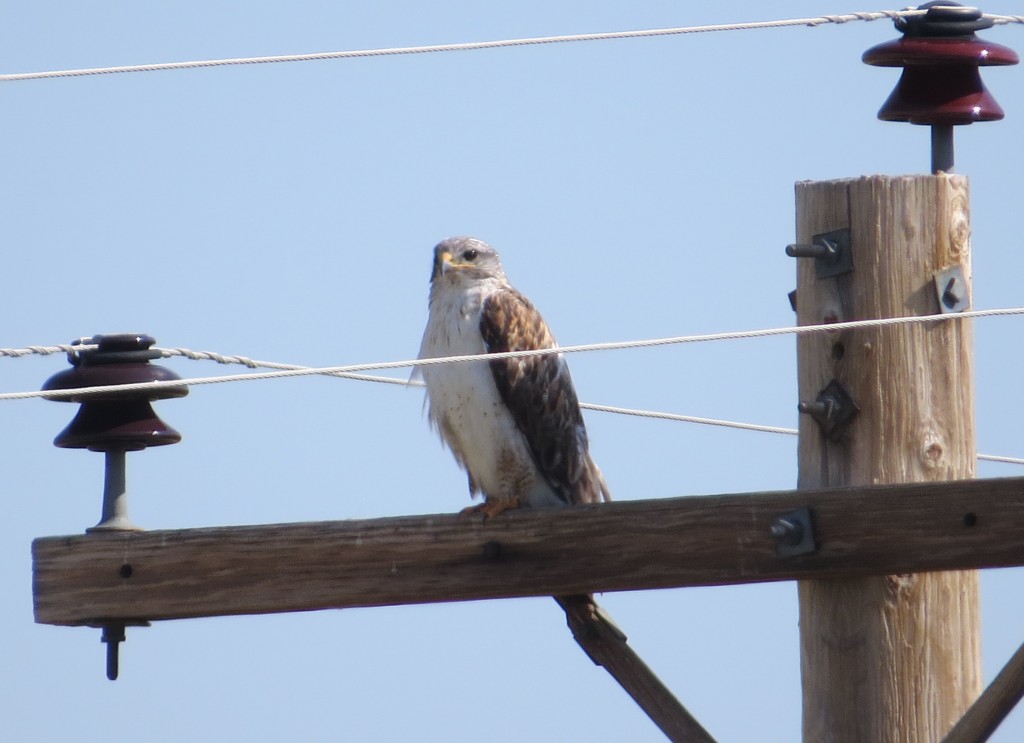 There were more raptors perched on poles, but we were in a hurry and couldn’t afford to stop anymore even if I did need to find a Swainson’s Hawk for Evan and for my photo collection.  After all, there were relatives to catch up with, good barbecue to eat, and lizards to catch. 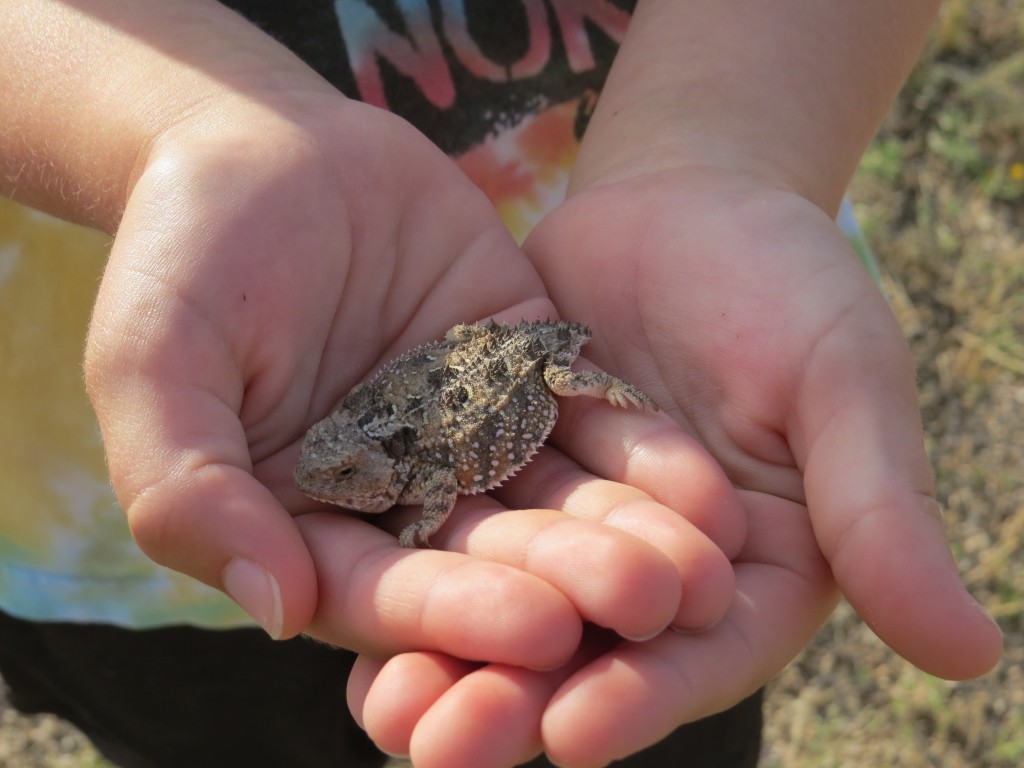 Evan’s cousin Andrew showed him the ropes for catching these cool lizards, and Evan caught this one all on his own.  As someone who had cages full of lizards as a kid, I wanted to keep this one in the worst way.  Even Melissa said it was cute. If Evan had asked, I couldn’t say no.  But he didn’t ask, so there was no moral dilemma of the lizard variety.

As Evan played with lizards, I checked out the birds hanging around my cousin’s house. I saw many of our species from back home, but we did pick up the Broad-tailed Hummingbird which would become probably the most common bird of the trip.  Its metallic buzzing could be heard almost everywhere we went.  Otherwise, Mountain Bluebirds, which would also become quite common, were still captivating at this point. 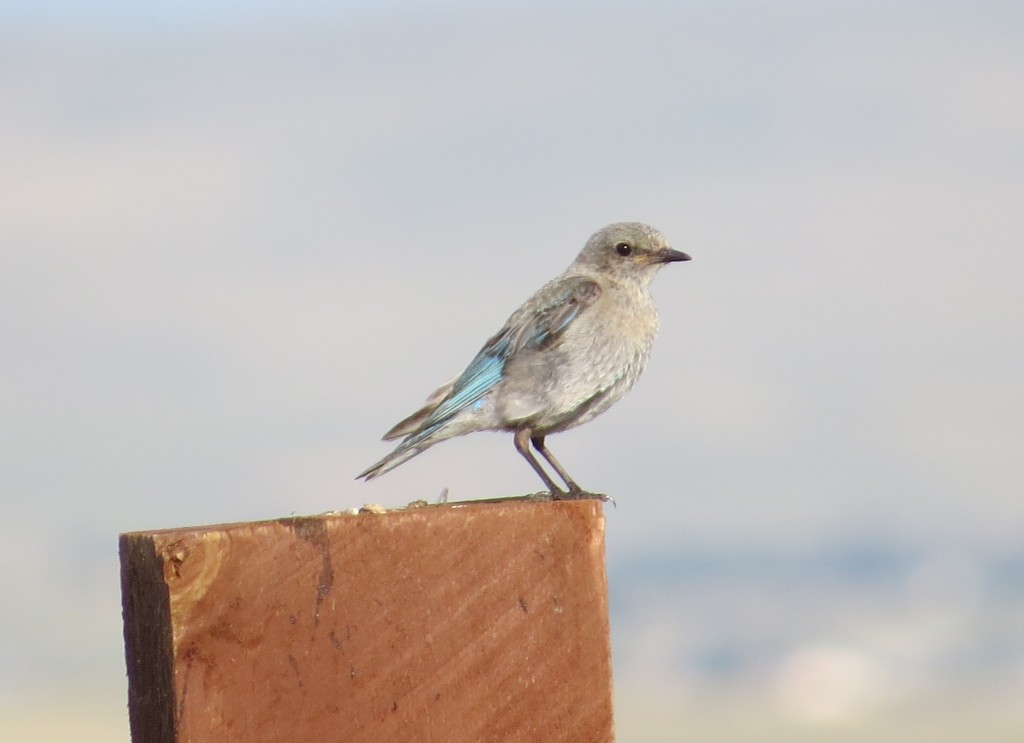 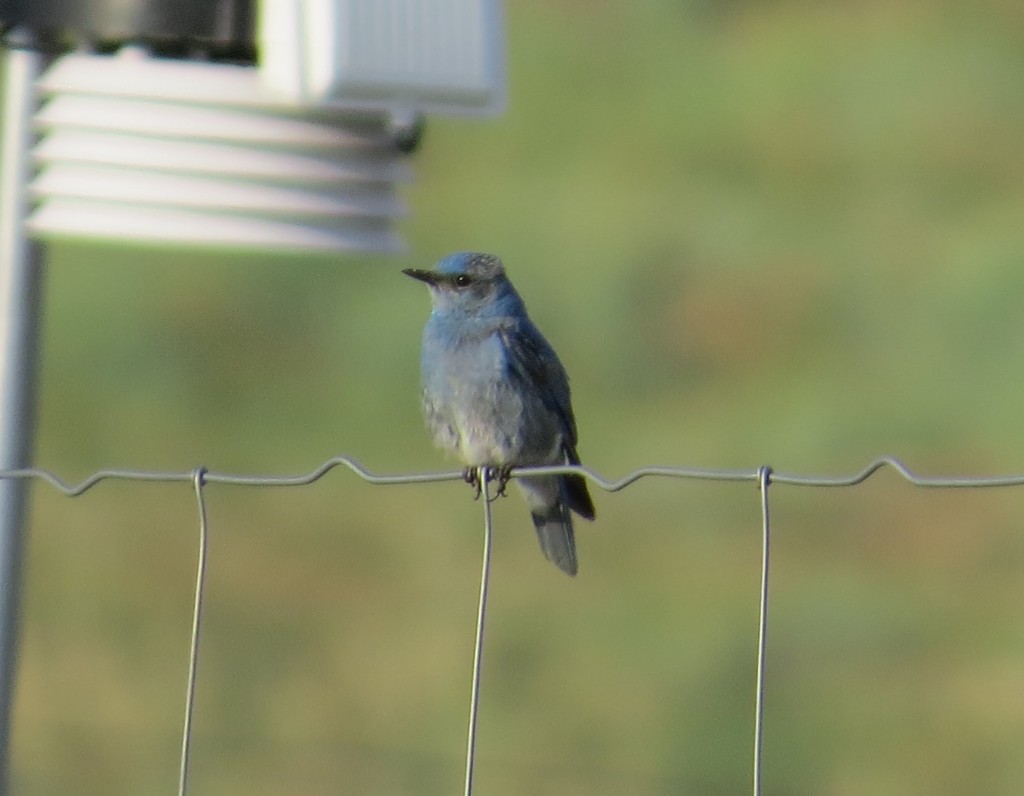 As fun as it was to hang out with my relatives, all good things must come to an end as they say.  So we grabbed a hotel room in town before our journey into the mountains of south-central Colorado near Westcliffe. As I had done in Hot Springs, I was up that next morning before first light so I could do some solo birding before everyone was awake. eBird was again very helpful in finding me a birding locale within a short drive from our hotel. I went up the side of the mountain on the very western edge of the Springs where I birded Blodgett Peak Open Space.  This big fella was there to greet me. 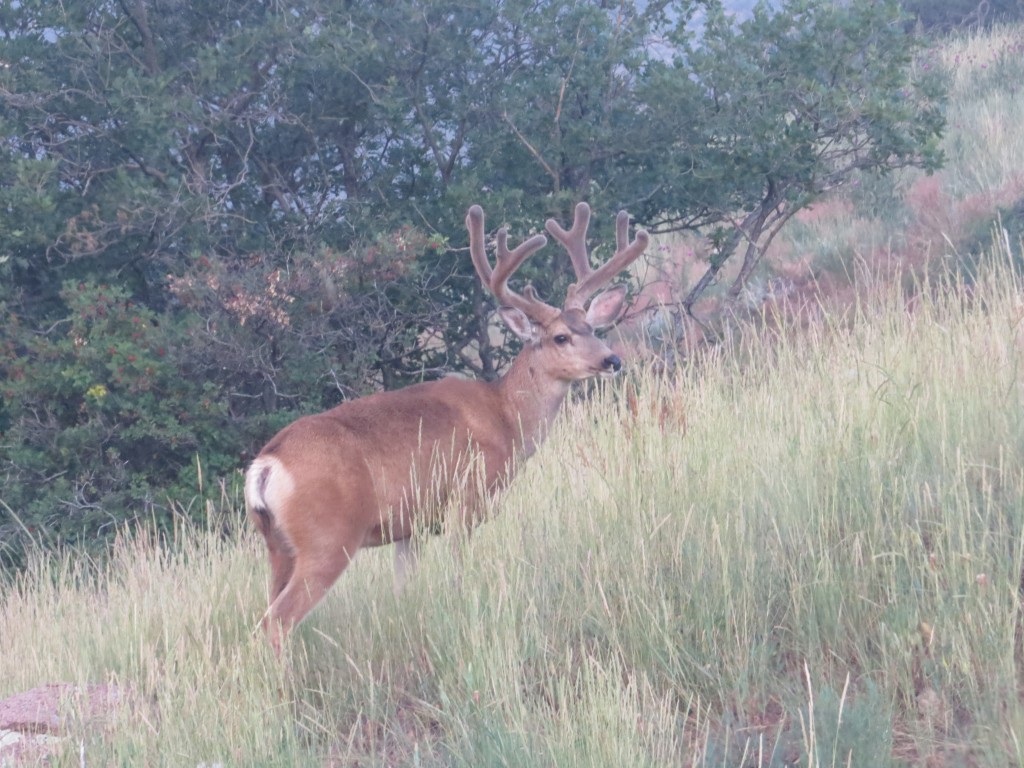 Once again the first bird to greet me of the morning was the Spotted Towhee.  I was hoping for better photo ops, but the day was too young and not very accommodating with its early-morning light.  It’s too bad because this bird was everywhere and close.  I really wanted that killer photo to solidify my first sighting back home in Minnesota last April.  But it wasn’t to be.  Not yet anyway.

One of the first lifers I heard that morning but took awhile to see was the Mountain Chickadee.  The song I was hearing was definitely chickadee in origin, but definitely different from our Black-capped variety back home.  Eventually, though, I was able to lay eyes on this spastic seed-eater.  This was a hoped-for lifer of the trip. 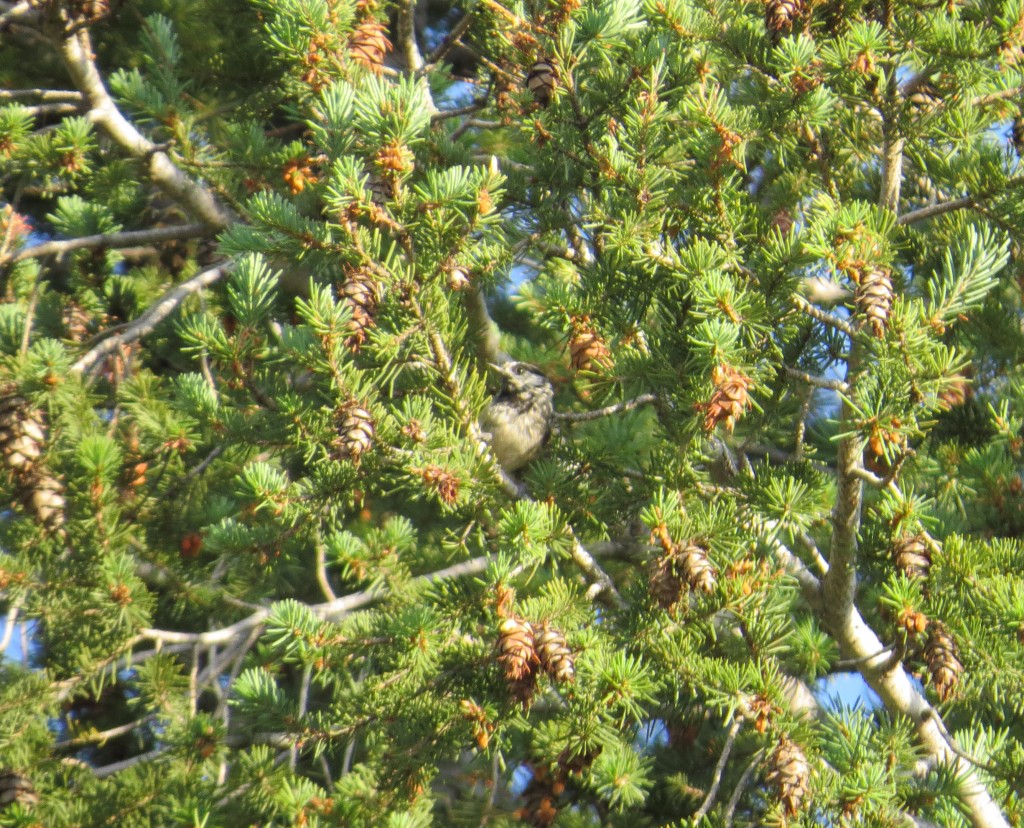 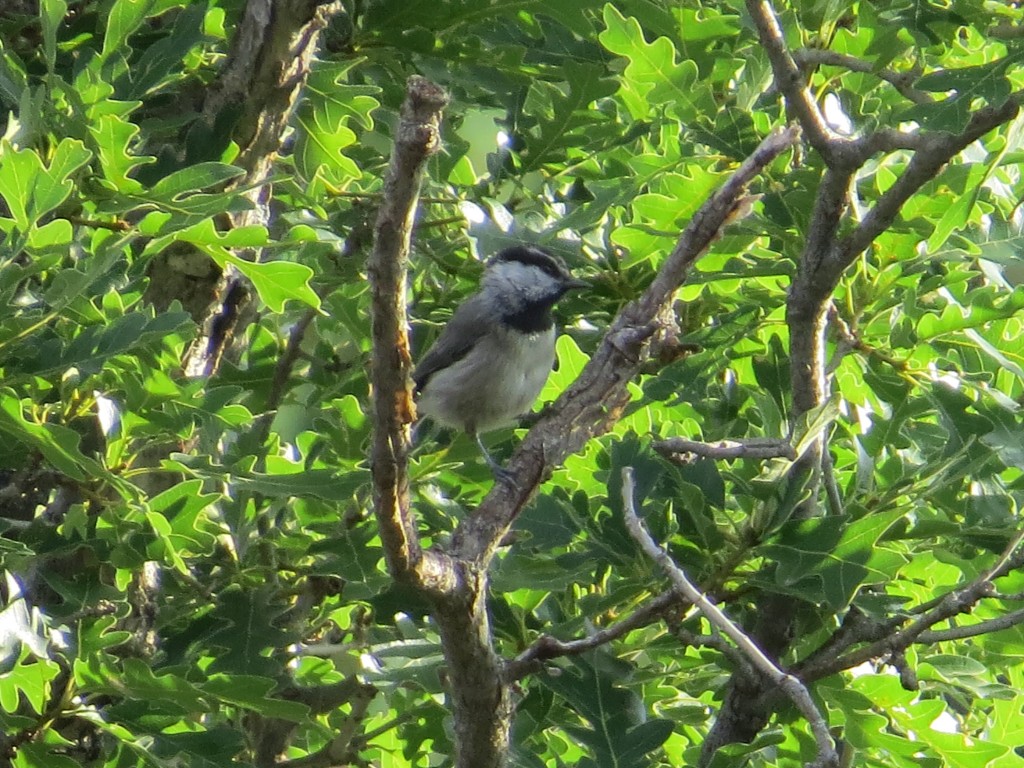 From reading the eBird reports I was expecting to find Western Scrub Jays.  It took me awhile, but I found a couple of this life bird. 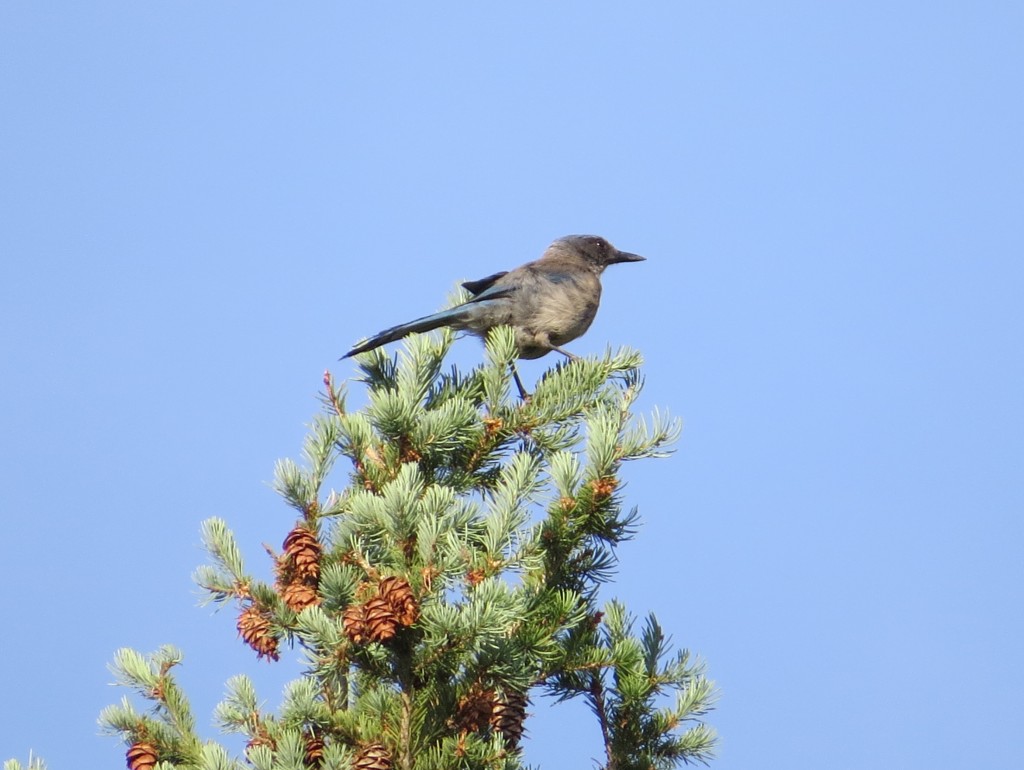 On my quiet walk with no other people around I also found a lifer Virginia’s Warbler.  In typical warbler fashion, it wasn’t posing for any photos, and I just wasn’t up for chasing down a good photo of a bland bird. 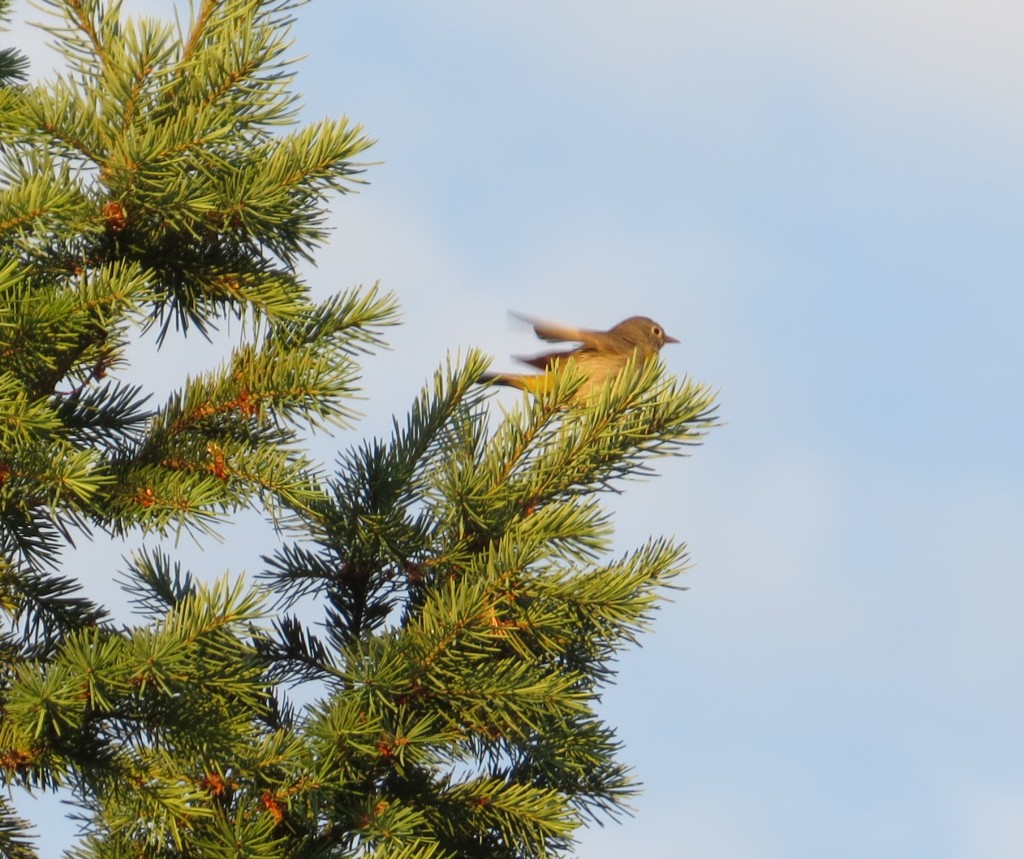 Walking in the mountains is always a good way to start the day, even more so when you tally three life birds in the process.

Getting back to the hotel I was greeted by one of the literal trash birds of the west, the Black-billed Magpie.  It’s such a shame that such a good-looking bird lowers its standards to the likes of gulls and jays by eating things one can only find in parking lots and such. There must have been a dozen hopping through the parking lot, standing on dumpsters, walking the rooflines of the hotel, and disappearing into the pines across the street.  It was fun to actually photograph them up close and in good light – something I have not been able to do in the Sax-Zim Bog.  I had never really seen the blue tint on them before, and I also discovered that their eyes are blue too! 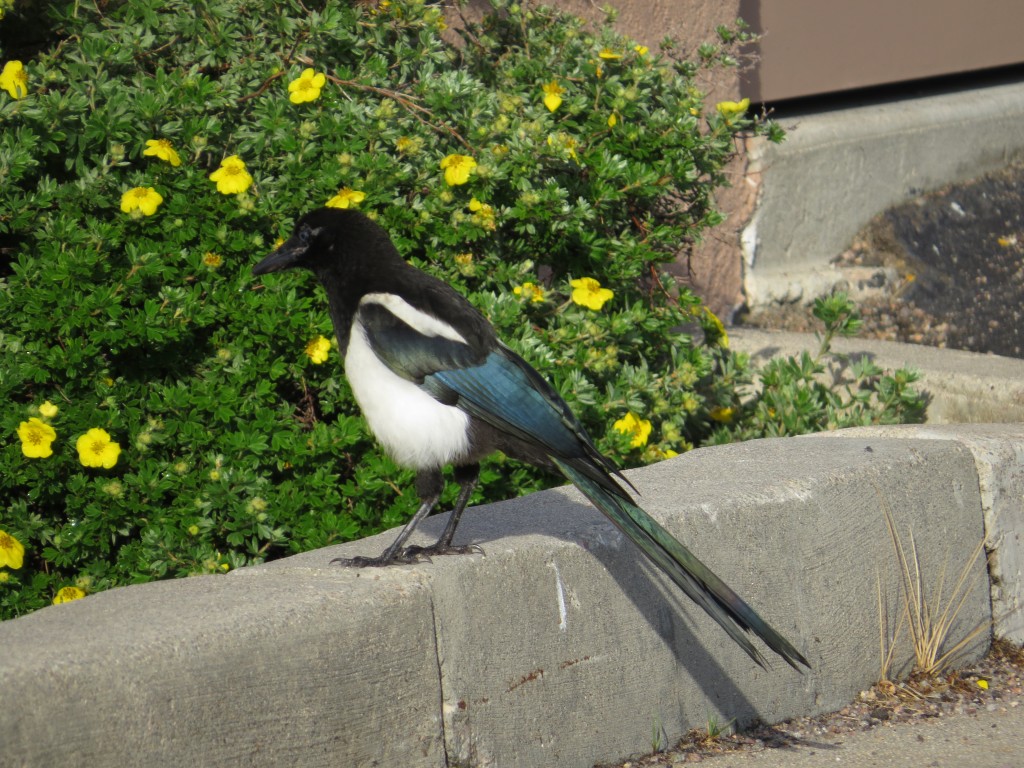 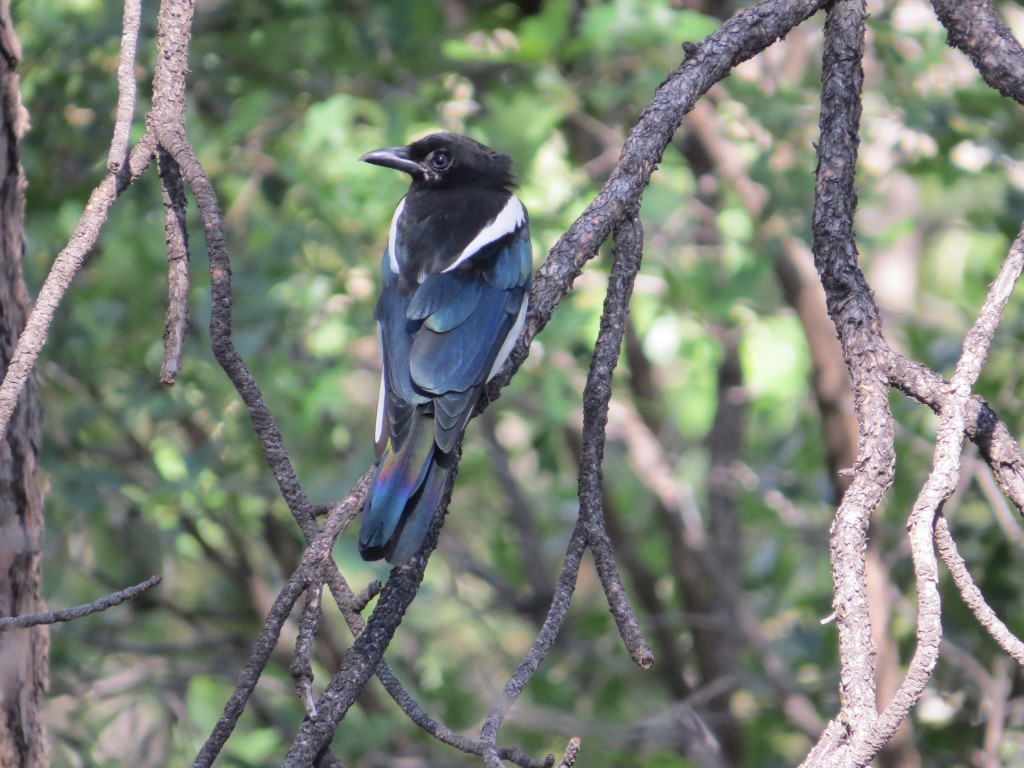 After enjoying the magpies and getting the family assembled, we headed to Garden of the Gods.  We visited this National Natural Landmark five years ago, but with its other-worldly rock outcroppings it is a must-see each visit. 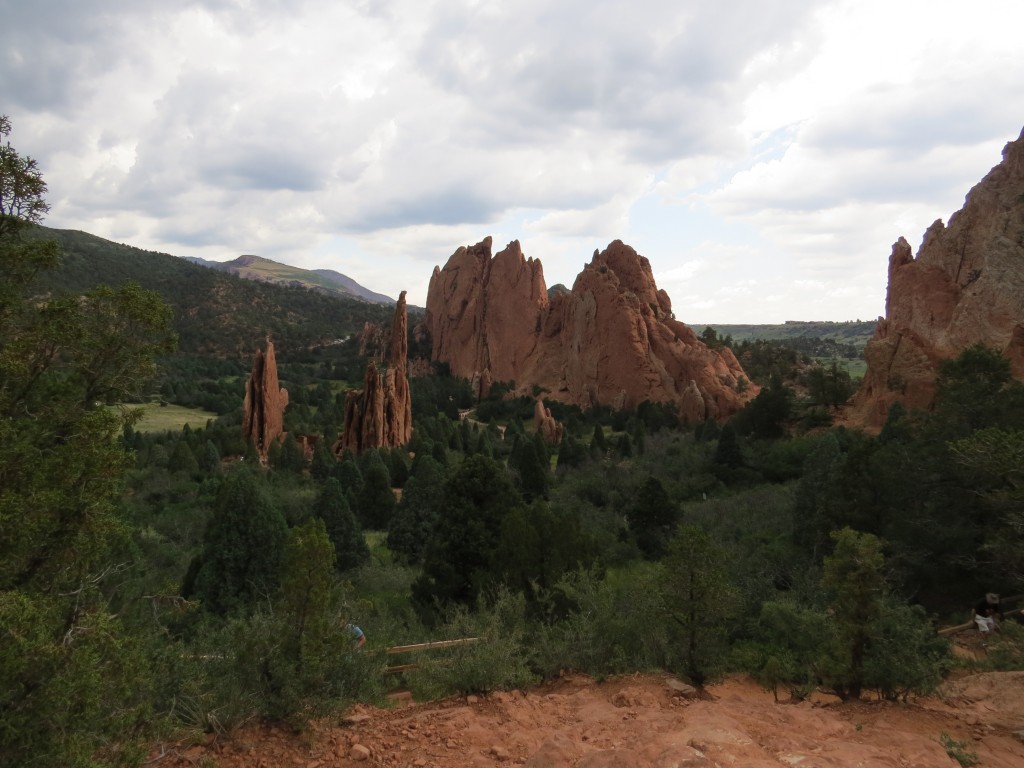 Central Garden at Garden of the Gods

If you can look past the artificial hand-holding, you can see that the natural beauty abounds. 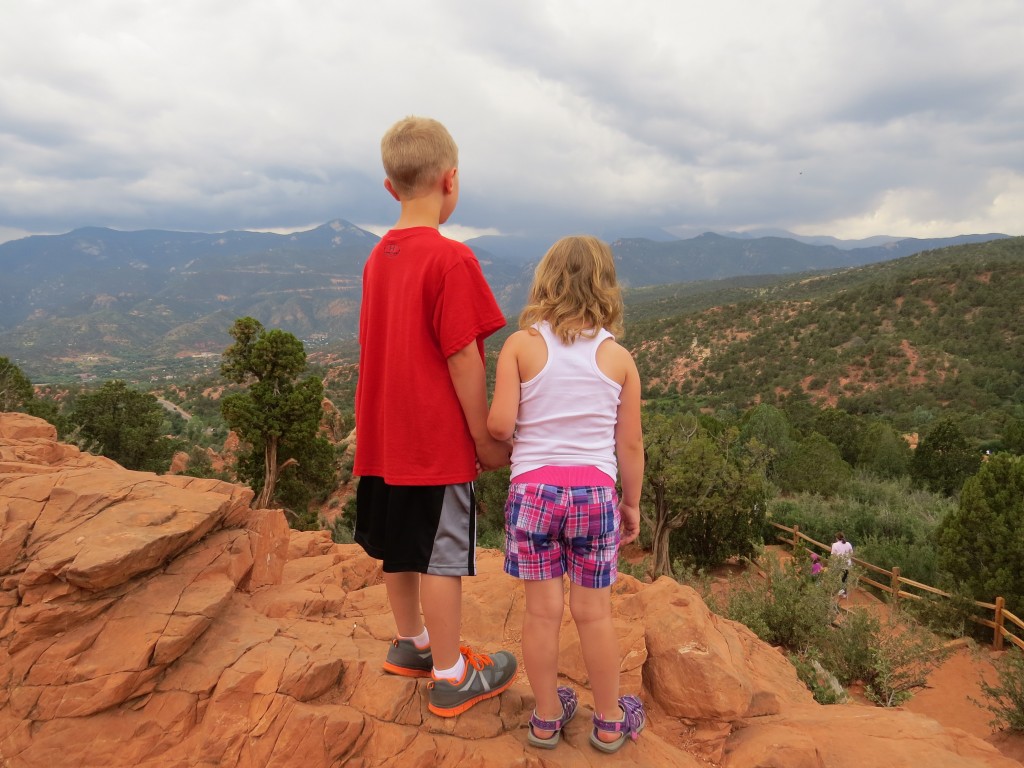 And the birds are beautiful here too as this brazen and audacious Western Scrub Jay shows while he prowled the parking lot for picnic leftovers or eyeballs of tourists napping in chairs.  It was good that Evan got to tally this lifer too since I had got mine earlier that morning. 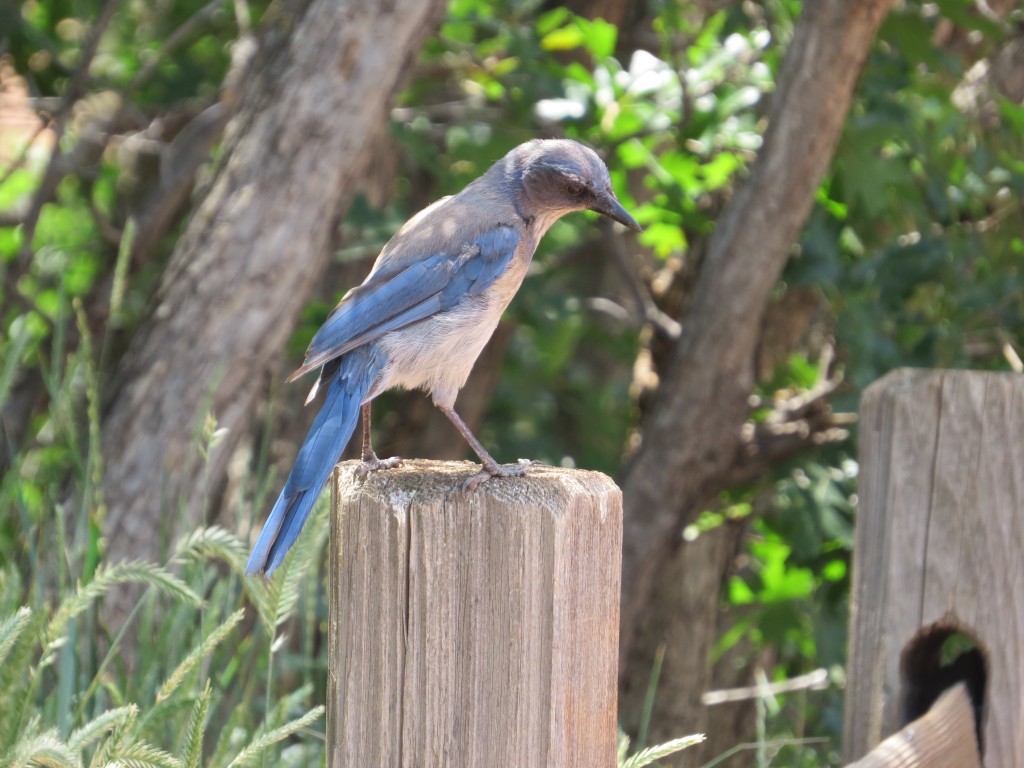 Melissa spied this Violet-green Swallow perched conspicuously on a snag.  It was fun to see its true colors as its namesake implies. 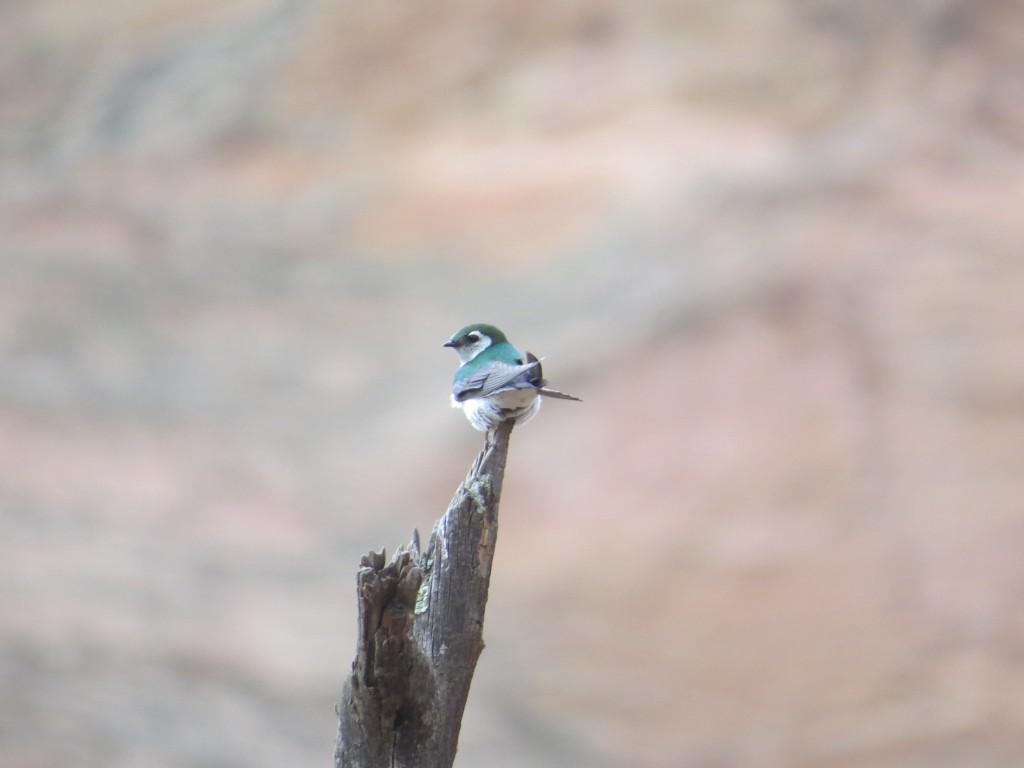 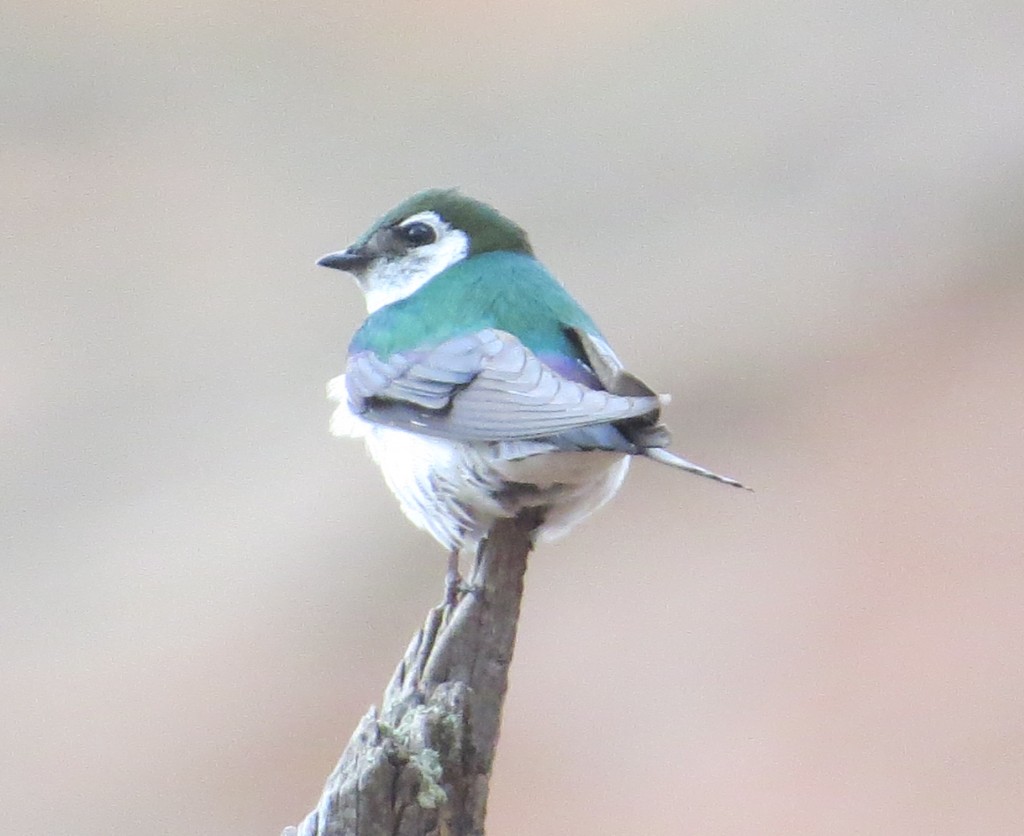 While Evan tried to climb rocks, 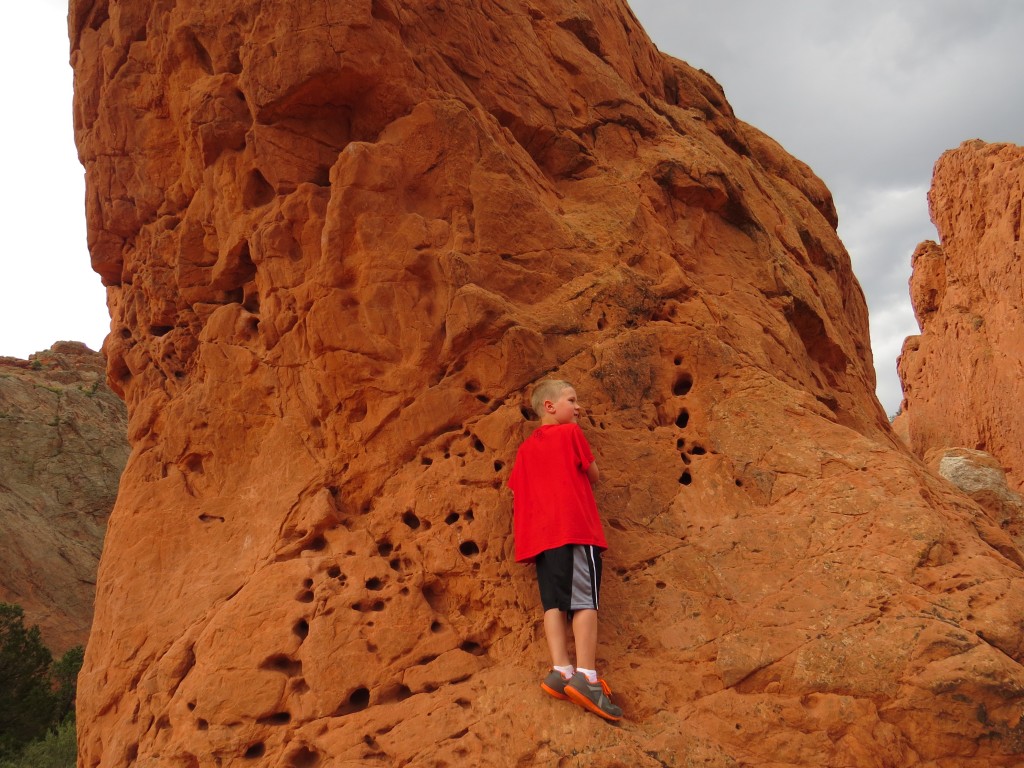 I tried to photograph missiles with wings, known as White-throated Swifts. 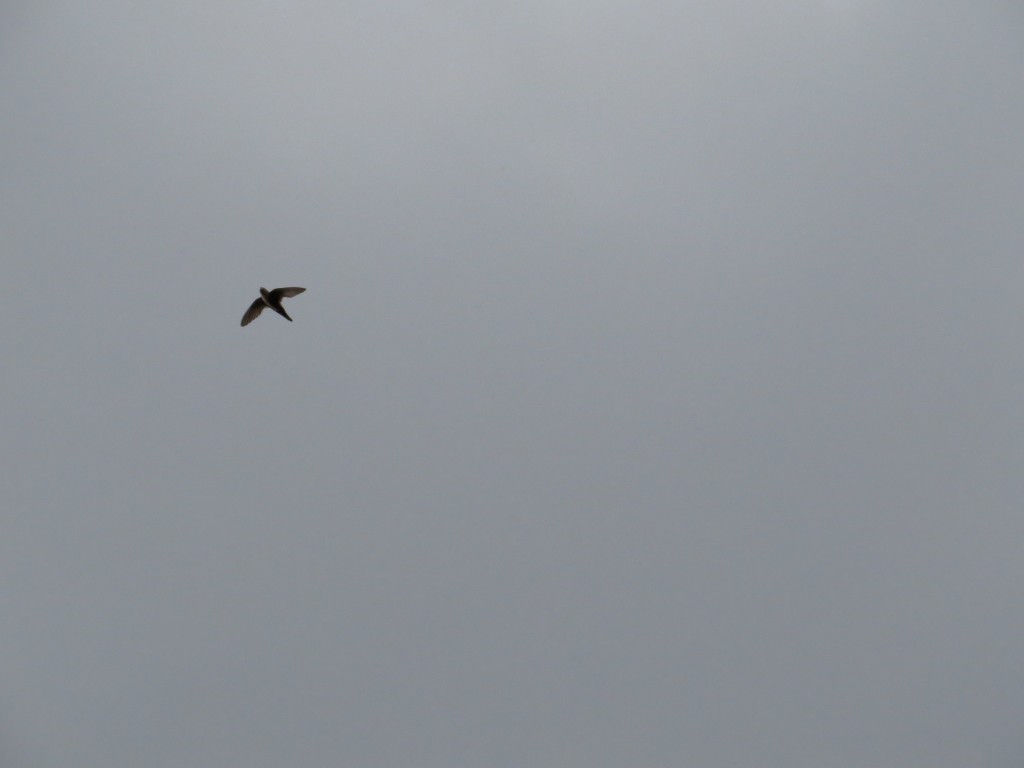 White-throated Swift (if you squint)

Neither of us were very good.  But we both had fun trying.

At one point I heard a Spotted Towhee singing its song.  I was still on the hunt for a good photo of this bird.  I dragged the family to the spot, and we all looked unsuccessfully.  Finally I decided to pull the plug.  Then Evan cried out, “But Dad, I’ve never seen one!”  I completely forgot he needed this lifer!  I never was able to get him on the bird in our own county, so apparently it had been gnawing at him that I had this bird and he didn’t.  Alright, so now it was more than just getting a photo; it was a genuine life bird hunt.

We still couldn’t see this particular bird we were looking for, but it didn’t matter because we eventually heard another one singing his heart out from the top of a juniper.  Evan got his lifer. I got my photo. Whew.  It felt doubly good.  I could finally put that great sighting from back in April to rest.  And so could Evan. Little did I know that the Spotted Towhee would be obscenely common for the rest of our trip. 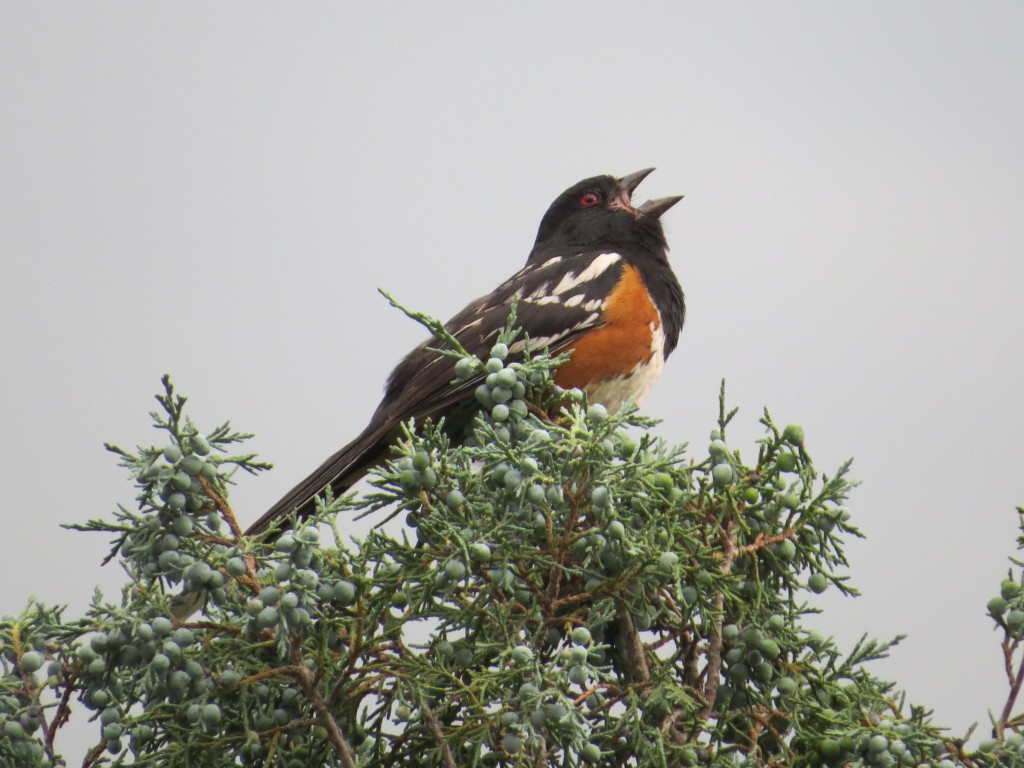 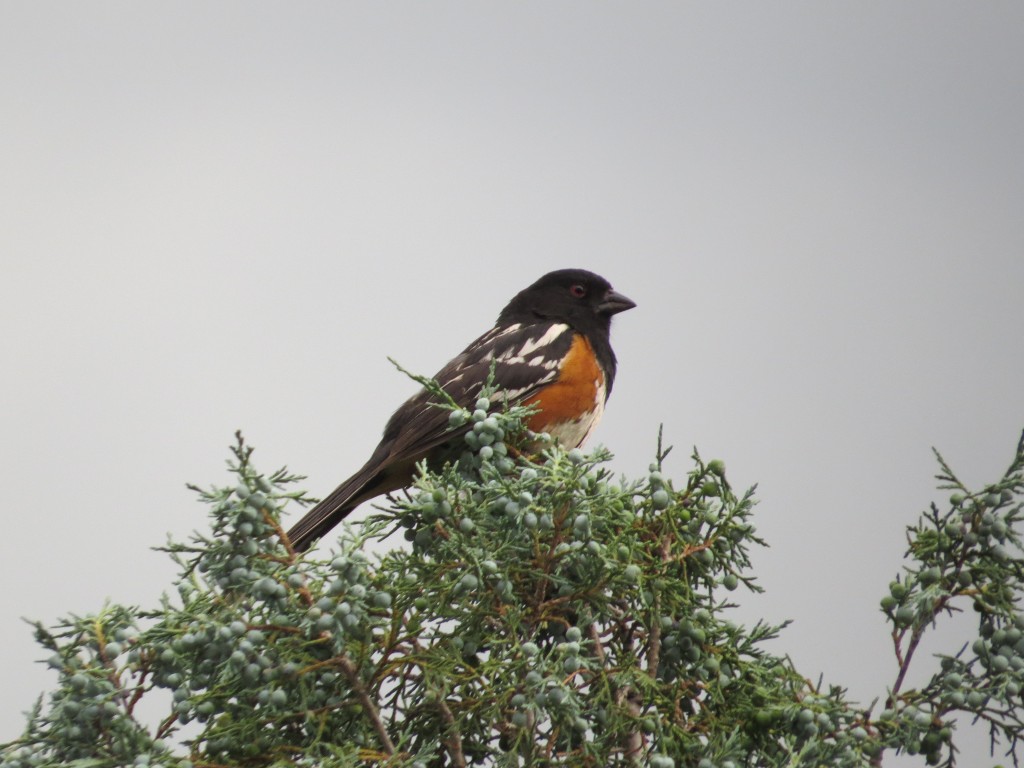 Colorado Springs held a nice cache of life birds (and relatives) for us.  After Garden of the Gods, we were headed up to the mountains in Custer County.  Coming up will be perhaps the best birding we would experience the whole trip.