Alright, dear readers, as promised in the post before the Brainerd trip, I have a story to tell.  And it’s a good one.  I really should have learned by now to expect the unexpected.  But I haven’t, and that’s why this hobby can be so exciting and why this story is so good.  I had one of those unexpexted moments in the swamp back home.  Sadly, though, I did not get my guest photos to enhance the story.  Nevertheless a good story is a good story and needs to be told.  But because we live in an increasingly visual society (i.e. fast food menu boards), I have included some gratuitous bird photos from the archives.

The story starts when I got up at an unwholesome early time bound and determined to brave the mosquito thicket to try to see a Winter Wren at my parents’ place.  As I walked to the location, getting soaked from the dew-laden, tall grass, I was struck by the absence of the Winter Wren’s song.  It was strange since I had heard it the past couple days.  Since I wasn’t hearing it, I scrapped my plans to go bushwhacking.  But I was awake and in the land of birds, so I had to do something.

I settled on driving the roads in the area to look and listen for birds. The audio birding was fun as I heard another Black-billed Cuckoo, Sedge Wren, and a collection of warblers.  I even got to see a Red Fox soaked from dew of the morning, standing on the road for a momentary reprieve from the wetness.

I didn’t quite know what to do with myself – it’s frustrating to be up for some birding but have no focus, no plan of attack.  I finally decided I would drive the swamp road.  Maybe I’d get lucky and catch a Spruce Grouse on the road gathering grit for his crop.  After all, I saw one in that spot about a decade ago.

The road through the swamp is part of the route between my parents’ house and Melissa’s parents’ house.  Both sets of parents actually live on the same road about 10 miles apart.  No, Melissa and I did not grow up this close to each other, but my parents moved to this area when they retired. Though the parents live on the same road, you cannot get from one place to the other without taking some other roads.  Let me explain and use your mind’s eye to picture this. From Melissa’s parents’ you head east for a mile, north for two miles, east again for five miles, back south for two miles, and then east again for a mile.  It’s like you are driving the outline of a short top hat.  Though they live on the same road, the reason for this large hat-like bump of a detour is that there is a huge spruce bog separating our families where both house-building and road-building would be nearly impossible.

This five-mile stretch runs through part of the bog with tall Black Spruce trees lining the road creating a corridor through the swamp.  The bog used to depress me.  You look in the understory and just see utter darkness with occasional patches of light as the dense spruce boughs block the sun.  The “ground” is spongy as a bog actually floats on water. Mosquitoes reign supreme.  It is no place that a sane person would ever want to traverse.  Our family has bombed through the swamp road hundreds of times, often racing to get from one holiday meal to the next without properly digesting the first. I don’t think I had ever taken the gravel road at a speed of less than 50 MPH. Still, I often thought that it looked a lot like the Sax-Zim Bog and that maybe there could be a Great Gray Owl or something else that’s cool.  But I thought, ‘Nah, there couldn’t be anything like that this close to home,’ and just continued to drive warp speed.

Anyhow, I was trolling this five-mile stretch with the windows down trying to make sense of all the local variations of warbler songs when I noticed a vehicle a couple miles ahead of me that was stopped.  It’s very strange to meet other cars here, let alone at 6:00 in the morning. It couldn’t have been a hunter this time of year, and it seemed too early in the day for a forester to be out cruising timber.  Strange. I kept rolling along at 5 MPH listening to the sounds of the swamp but was distracted by this vehicle that wasn’t budging, only occasionally flickering his brake lights to indicate short bursts of movement.  What in the world was going on?  Finally I caught up with the now parked truck, and I as I passed it I saw it was Minnesota DNR truck and its driver was standing by the tailgate wearing a mosquito net-hat and binoculars.  With no coffee in my system, it took a little bit for my brain to process the image.  I got about a hundred yards past the guy when it hit me – a state employee wearing binoculars?!  You don’t need binoculars to look at trees or plants or really anything without feathers.  Holy smokes, I must talk to this guy.

So I whipped around and pulled up to the man.  And I saw his two-foot camera with a camouflage lens. Whoa, this is getting better! I asked if he’d seen anything good.  Then he dropped a bomb.  “Yeah, I just had a Great Gray Owl about a hundred yards back.” WOW! A lot of emotions were going through me.  First was a great anxiety to hurry up and see this owl and second was that my hunch of this bog being an owl abode was right! I desperately wanted to part company right away after he told me what was quite literally a stone’s throw away, but he just kept lobbing bombs – a Black-backed Woodpecker about a mile down the road, a Black-throated Blue Warbler near Orr, a Northern Hawk Owl a few miles away, and another Great Gray Owl the day before on – get this – another section of the route we travel back and forth between our parents’ houses.  Oh, this was good information but that owl…

Then the dude asked who I was.  He said recognized my name from the listserv, so I got up the gumption to ask him his name.  Sparky Stensaas was the reply.  Unbelievable. That may mean nothing to you, but Sparky’s in the big leagues when it comes to birding.  He’s a bird guide, a photographer, and the executive director of the Friends of Sax-Zim Bog.  It was fascinating to meet him on my turf far north of his normal range of the Sax-Zim Bog and the Duluth area doing official work.  We traded numbers to share any more sightings in the area, and then we split up.  Sparky was heading deep into the dark bog on foot, and I was staying on the road and going back to find that GGOW.

I never did see the owl.  Perhaps all our conversation scared it away.  How I would have loved to see this bird at “home” and in the summer no less.  We do have some resident Great Grays, but they are harder to find in the summer months.  So I don’t have a fresh picture for you and will instead have to appease you with my best non-winter looking GGOW pic. 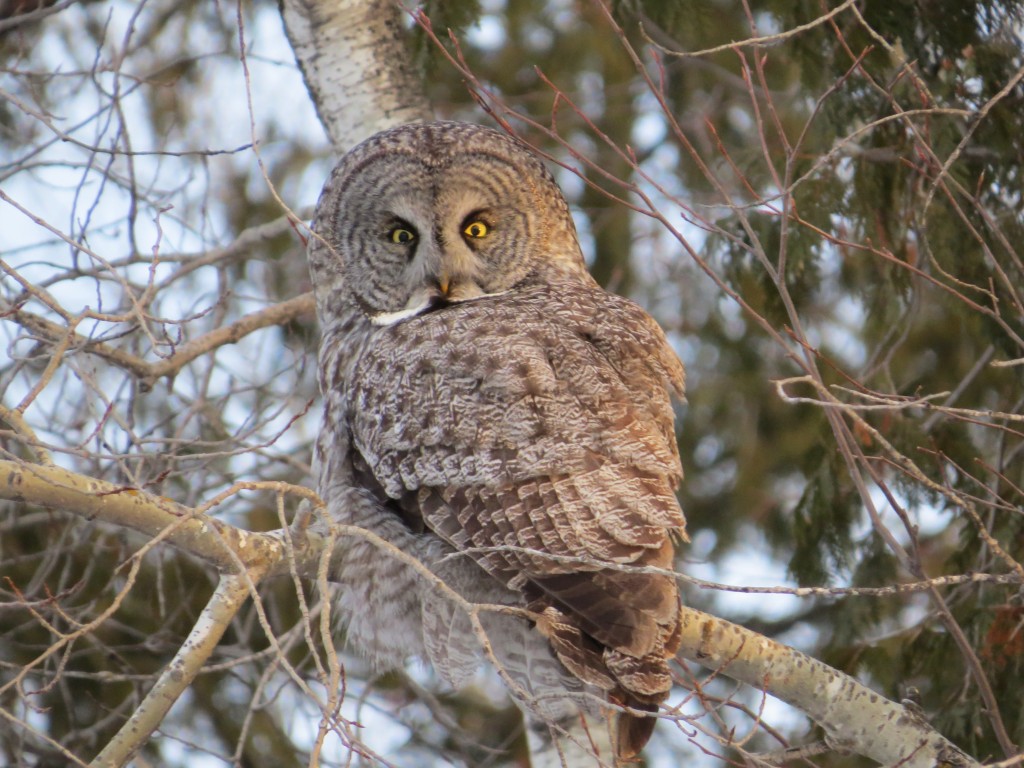 I got a text later that morning from Sparky that the Black-backed Woodpecker had come out to the road!  He told me what telephone pole to stand near and listen.  This is a tough woodpecker to find.  It’s the kind that Iowa birders travel to Sax-Zim to see and strap on snowshoes to follow a guide great distances into the bog on a 20-below day.  I’m not making that up.  I have never seen one.  How cool would it be to get this lifer at home instead of Sax-Zim?  I went there about an hour later but had no luck. 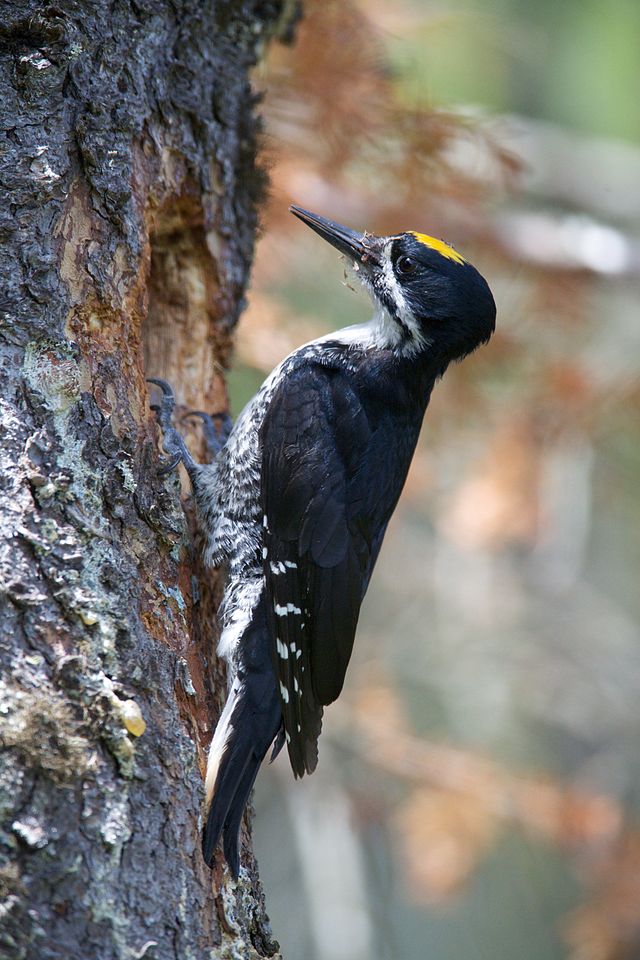 I’ve been back to this stretch of road several times right at daybreak and have been unsuccessful in my attempts to find either bird.  But I have something just about as good – hope.  Each time I go home now I have a mission to find these guys.  Dad always said the Sax-Zim Bog is like a good fishing hole.  Boats attract more boats and more boats until that’s the only place people fish.  Same is true with birding the Sax-Zim Bog.  As my dad said, those good birds can be anywhere in northern Minnesota.  Very true.  It only took a Sax-Zim guy to prove it.