So much for a summer of little birding and blogging.  The good birds need to stop.  At least there were some chases on which I put my foot down (and I don’t mean on the accelerator). One was a Yellow-breasted Chat–200 miles was just too far for a possible glimpse at a skulker. The other was a very interesting but bothersome find.  Bruce Fall, the Minnesota state eBird reviewer, discovered a large, “yellow-bellied” Kingbird at Murphy Hanrehan Park Reserve in Savage.  It was clear from the photos obtained by many birders that this was either a Tropical Kingbird or a Couch’s Kingbird and not the more expected Western Kingbird stray.  The first two Kingbirds are practically identical visually speaking, so they can only safely be identified by voice when outside of their normal ranges of Arizona and Texas.  One problem, though. This bird wasn’t talking for anybody.  Either of these Kingbird species is a significant vagrant, but what fun is it to chase a bird that no one knows for sure what it is? I dismissed this one pretty quickly.

Anyhow, I was having a pretty good day birding around the county on the morning of June 30th without even thinking about that CO/TRKI.  My day started by tracking down a county Lark Sparrow that Joel Schmidt had discovered in a gravel pit a couple days prior.  I was stoked.  I hadn’t seen one of these since my lifer two years ago, and now I had one for Kandiyohi County. 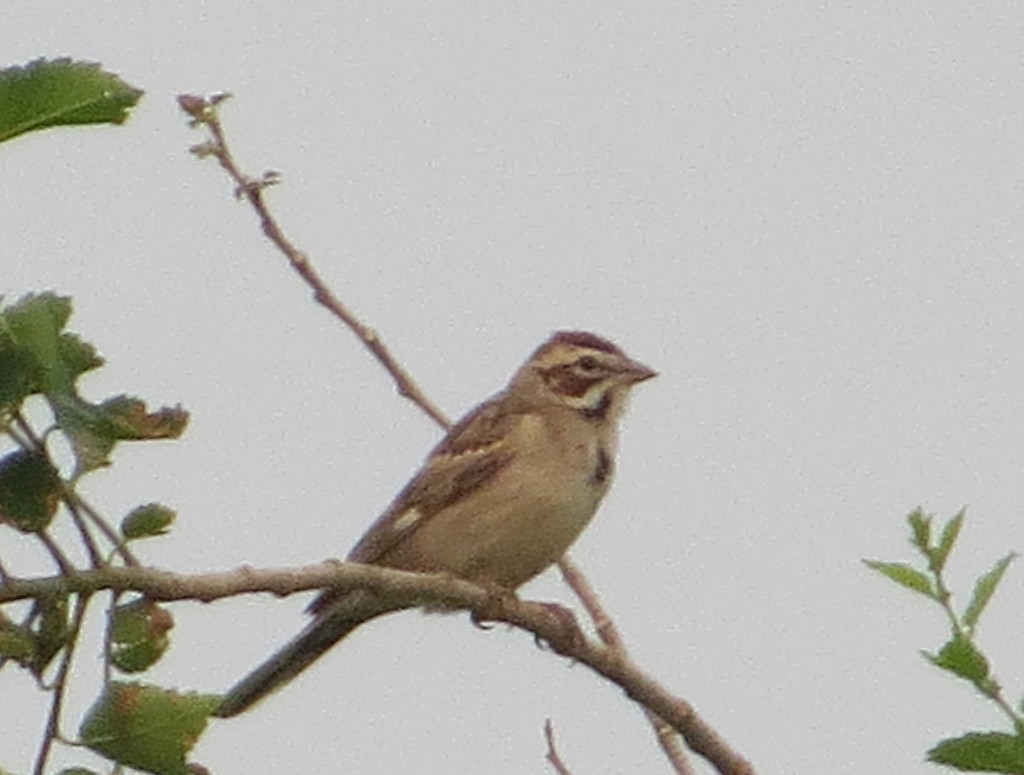 Even still, I wanted another bird for my county list that day, so after the LASP I went looking for some Red-necked Grebes that Joel Schmidt also found earlier in June.  I struck out, but a pair of COLOs next to the road was a nice consolation prize. 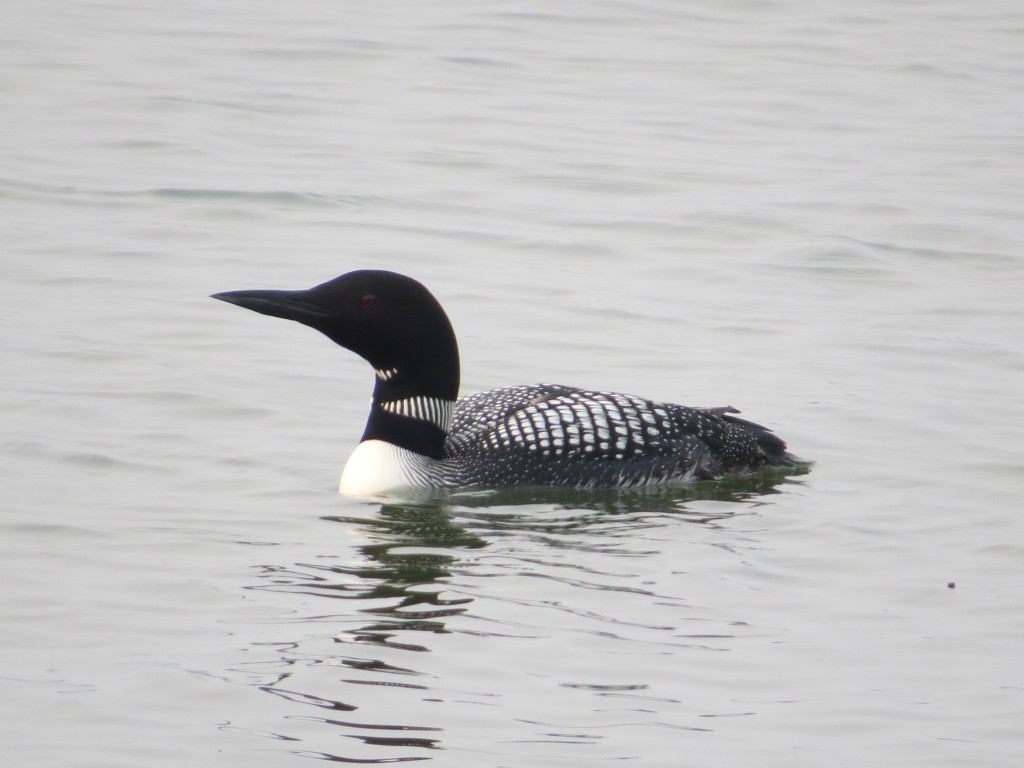 Hmmm…I wonder why they didn’t have a chick with them.  It’s best not to think about that. 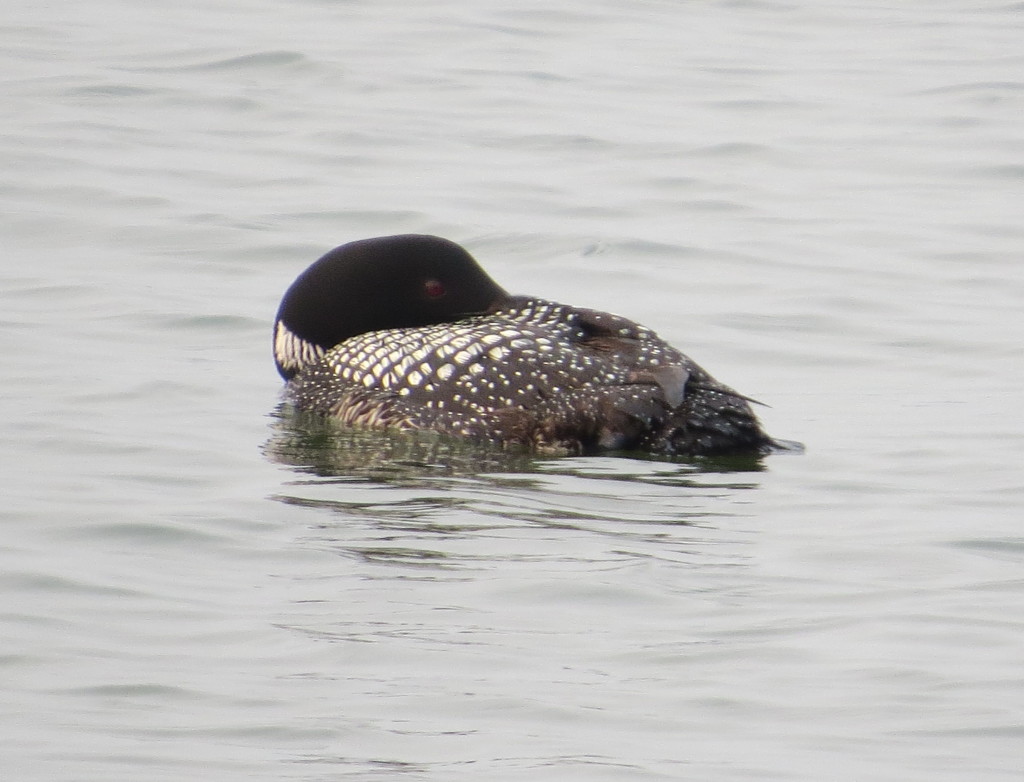 I got back to the house, happy with my morning, and was busy documenting my LASP sighting. Then an email came in that changed the course of my day.  After nearly 15 hours of observing the mystery Kingbird over the course of a week, Bruce Fall clinched the ID after hearing the Kingbird vocalize when a Brown-headed Cowbird got too close for comfort. Tropical Kingbird.  Holy smokes. This is a scarce bird in even the tiny corners of Arizona and Texas that it calls home. I told Melissa I would have to try to squeeze in a fast trip to the Cities to try for this one.  This was a Minnesota first state record of a Tropical Kingbird after all.

Melissa has apparently learned the skills of opportunism from watching me.  Usually I find a way to see good birds on trips or other outings that are non-birding.  This time Melissa was using this bird to get back to Ikea in Bloomington where she had been the day before.  She had her eye on a loft bed for Evan and now saw an opportunity to go get it.  Gee, a rare life bird and Swedish meatballs with lingonberry sauce? Yeah, I suppose we could go.

The four of us got to Murphy-Hanrehan about three hours after the decision was made.  We hiked the 3/4 of a mile to trail marker 36, and the Tropical Kingbird was there right away. It stood out like a giant sore thumb in the dead branches of this tall, lone Cottonwood.  It looked utterly massive in real life. 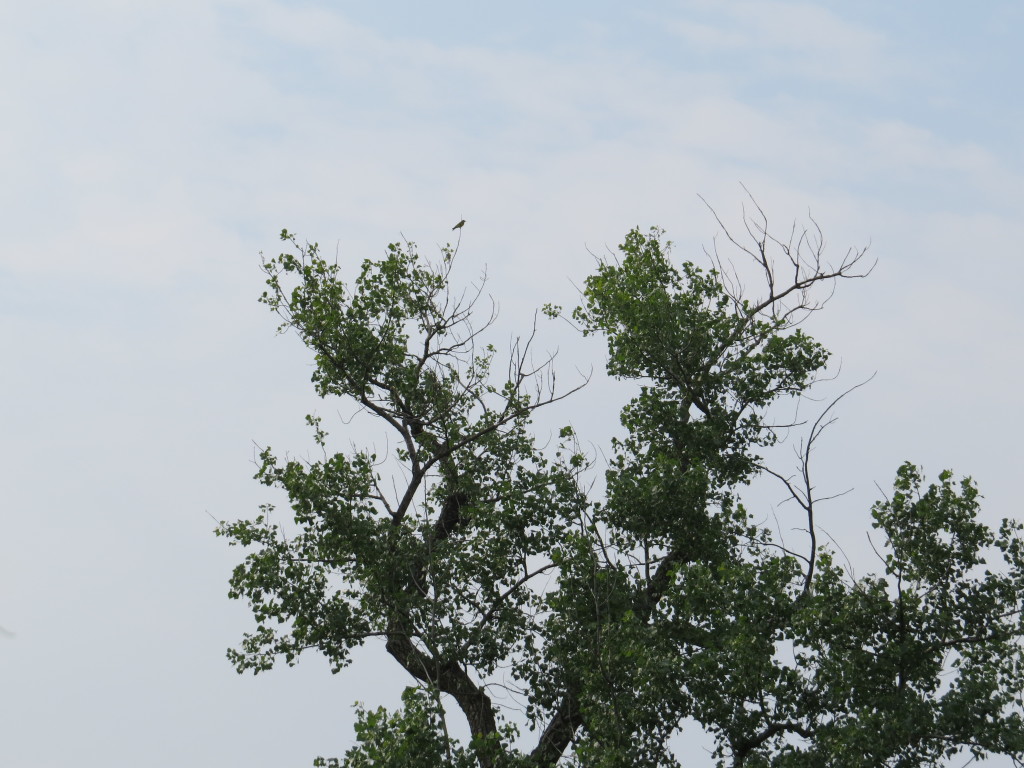 From this lone Cottonwood island that towered over the open fields below, this bird was King of his domain. 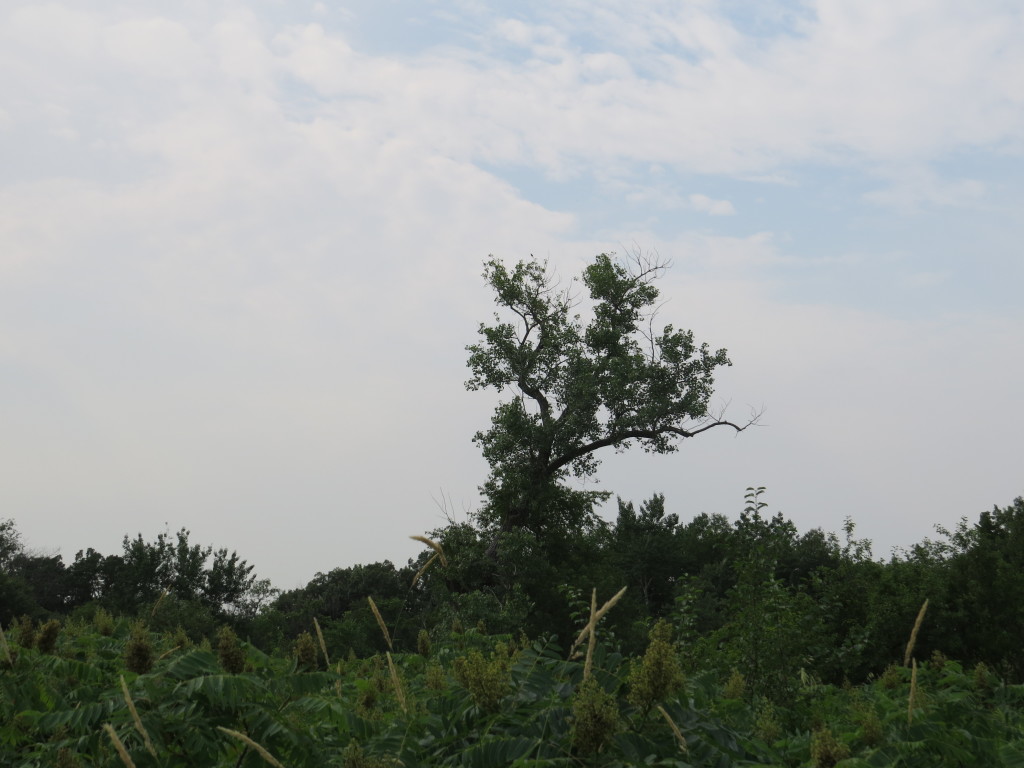 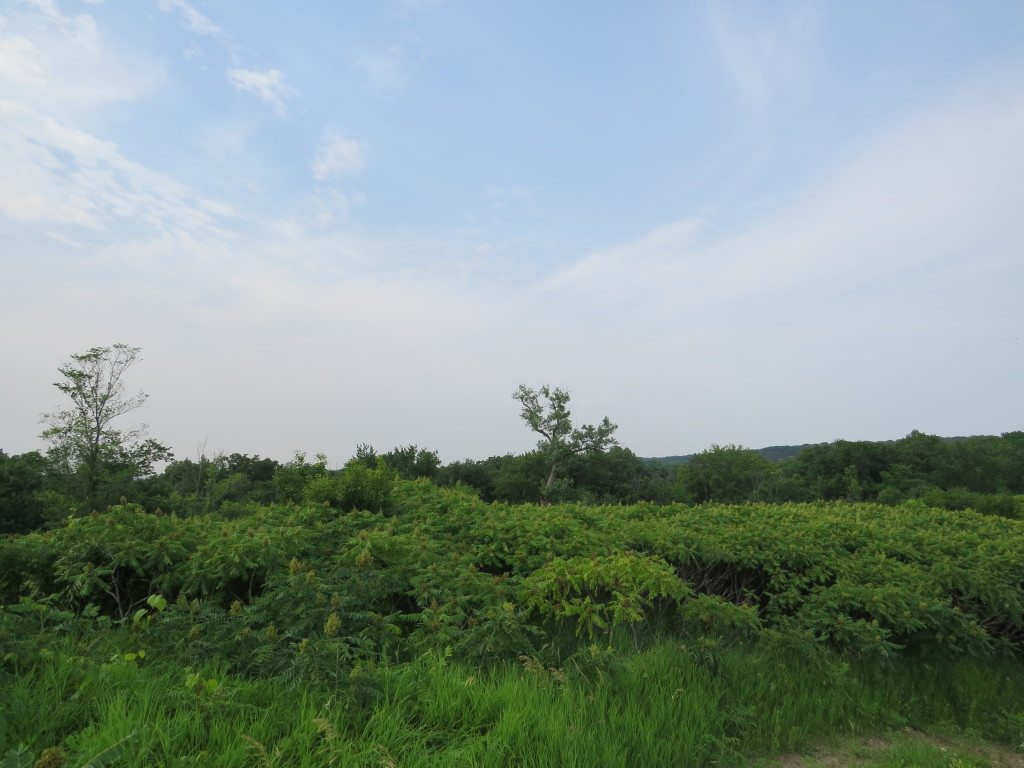 The bird was out there a ways, so I did the best I could for photos. 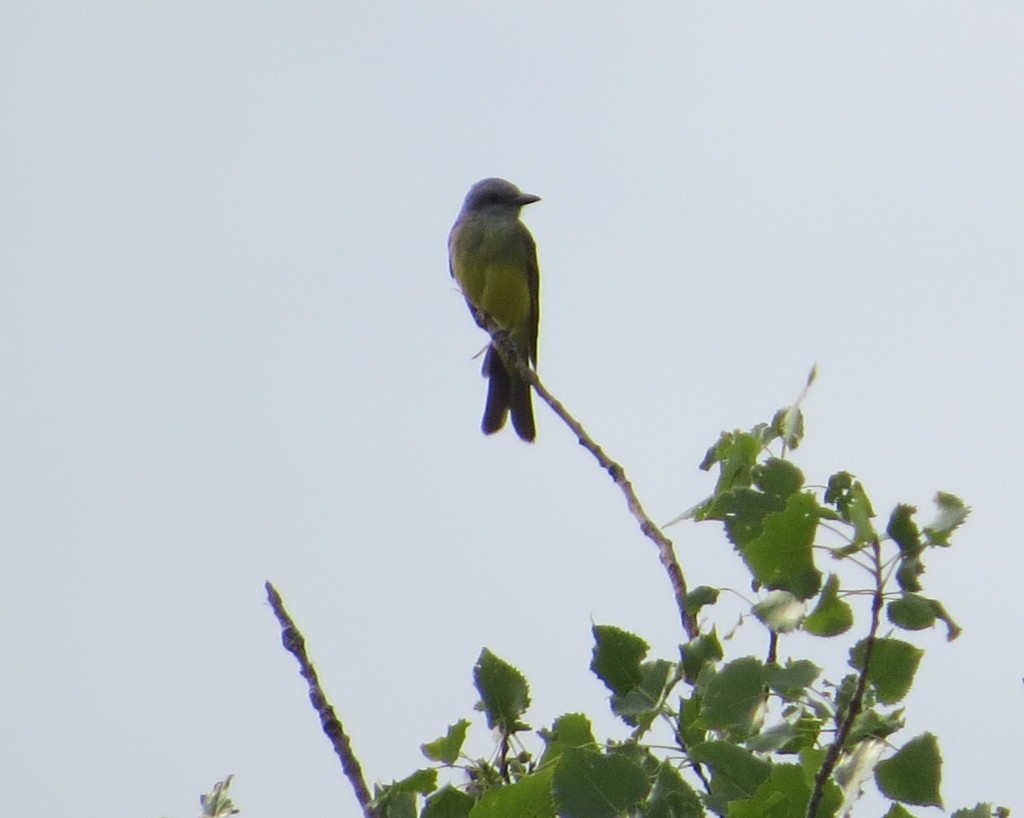 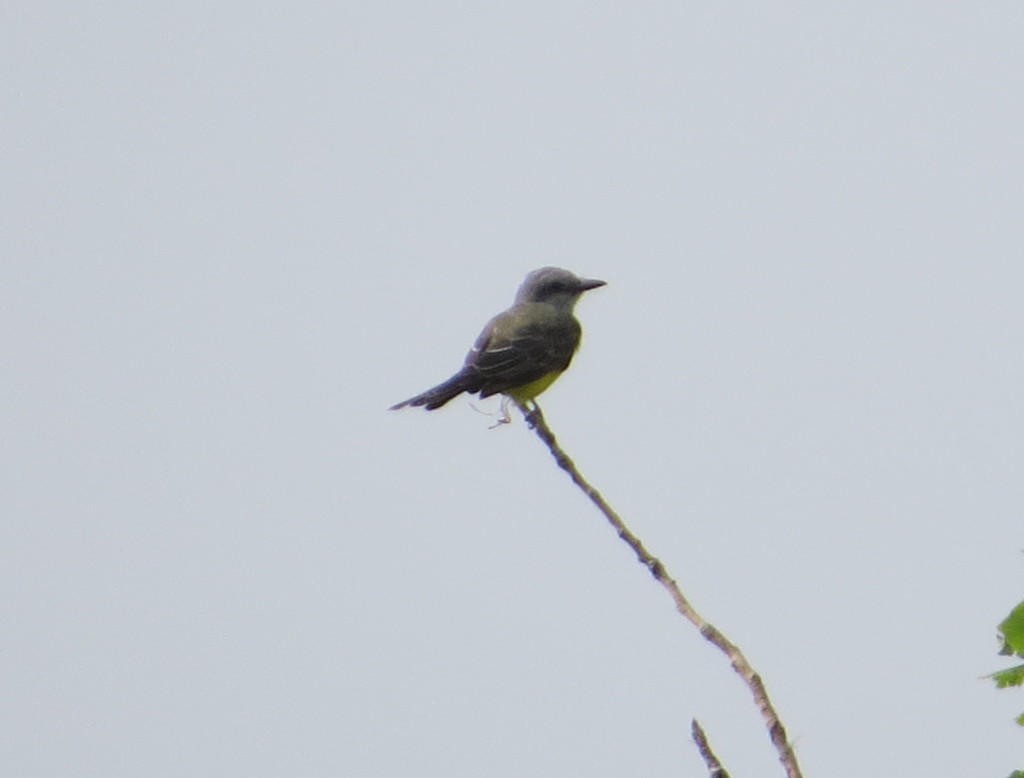 I showed the kids the bird on the camera’s LCD.  With another check mark for his list, Evan was out of there (and Melissa and Marin too).

I was hoping for better photos, so I stayed for a little while. After ten minutes of observation, something incredible happened that two other birders present and myself witnessed: the Tropical Kingbird stretched out its neck, pulled its wings behind its back, and vocalized! It was a 1-second higher-pitched trill.  I later listened to the sounds of TRKI on the iPod, and it was a match for the first call listed.  I felt bad for all the birders that have watched and watched this bird just waiting for such a moment.  Luck of the draw I guess.  Just like when something even better then happened–the Kingbird flew to a low perch right on the path!  Matt Stratmoen, his 600 mm lense, and I hustled down the path to get near it.  We’d snap some photos, creep closer, snap, creep, snap, etc.  We eventually got within 100 feet or less. 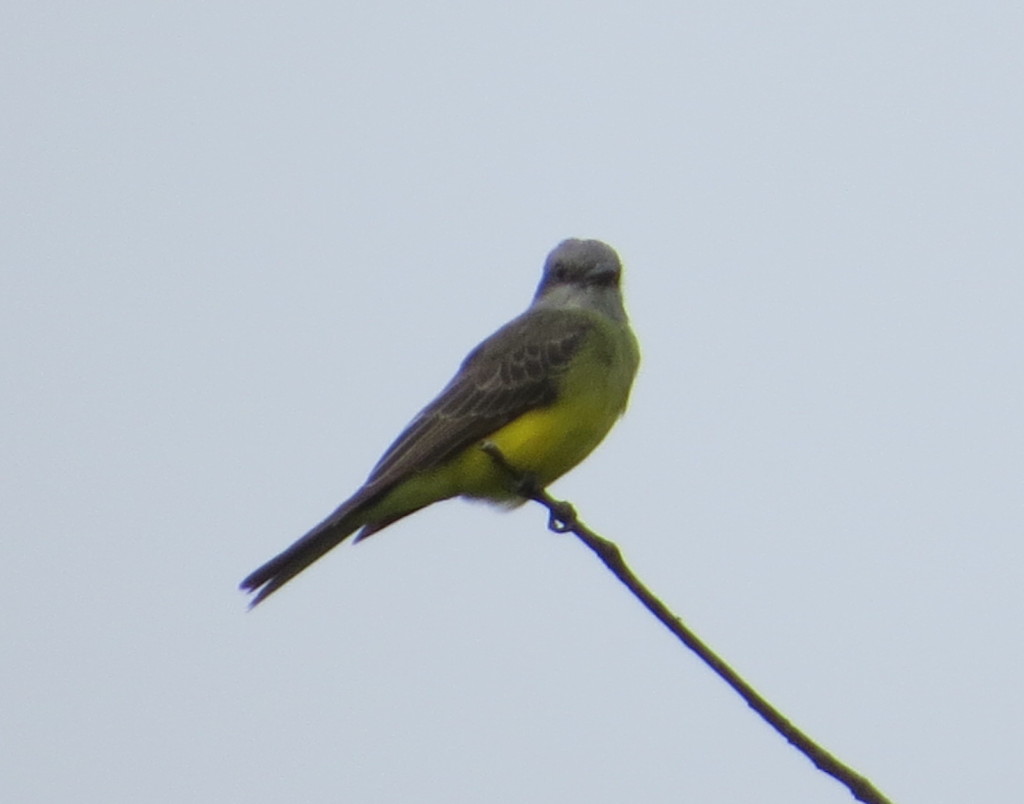 Matt is the one who took that amazing image of the Orr Black-backed Woodpeckers with the mom and dad in profile perched on either side of the nest hole with the baby sticking his head out screaming.  Amazing image.  It’s on MOU’s website. 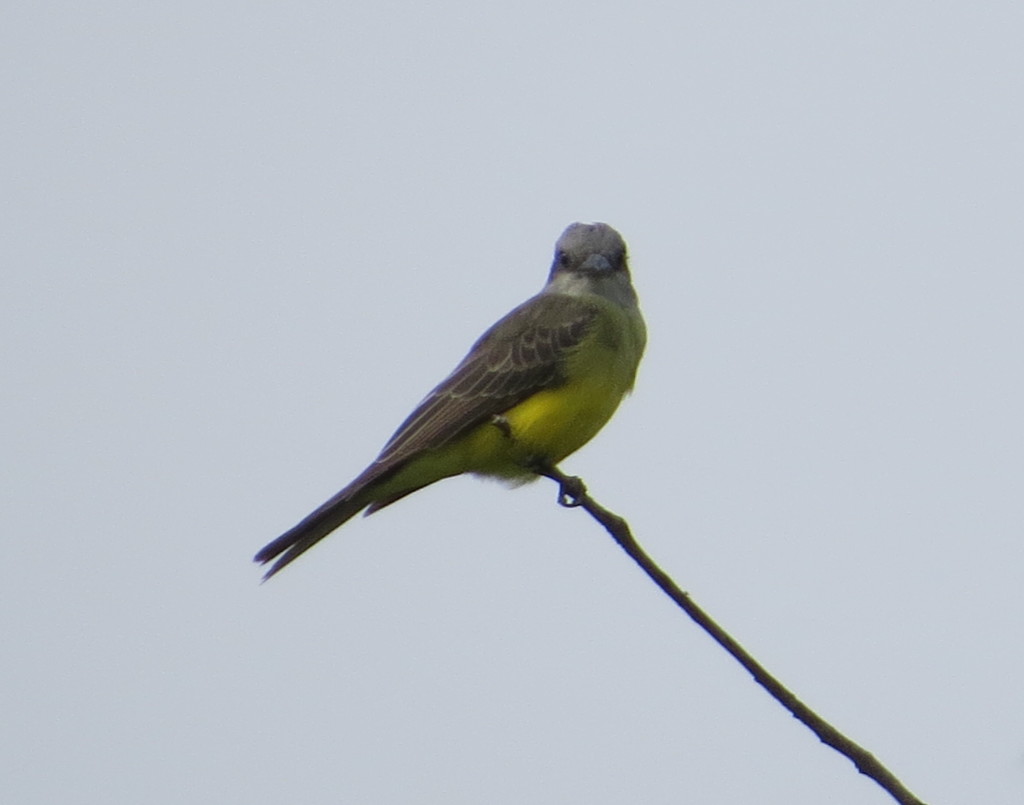 We won’t talk about the quality difference between Matt’s photos and mine of the Tropical Kingbird from the same distance.  But I can live with mine.  The views were phenomenal and more than I hoped for. 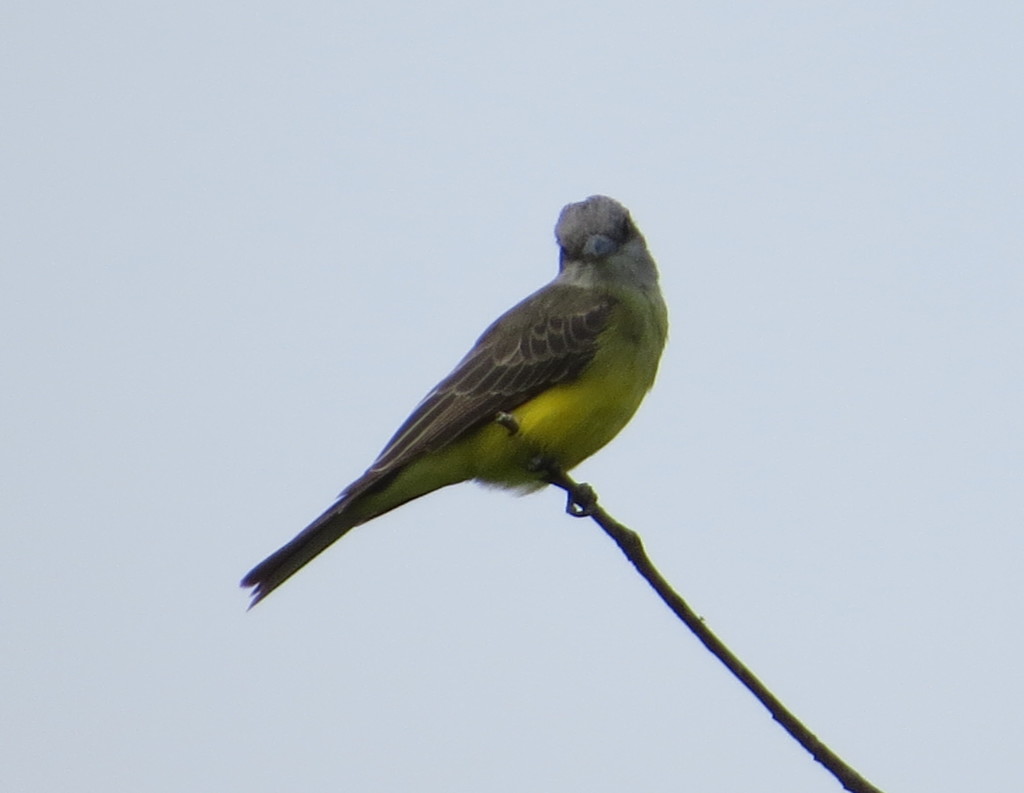 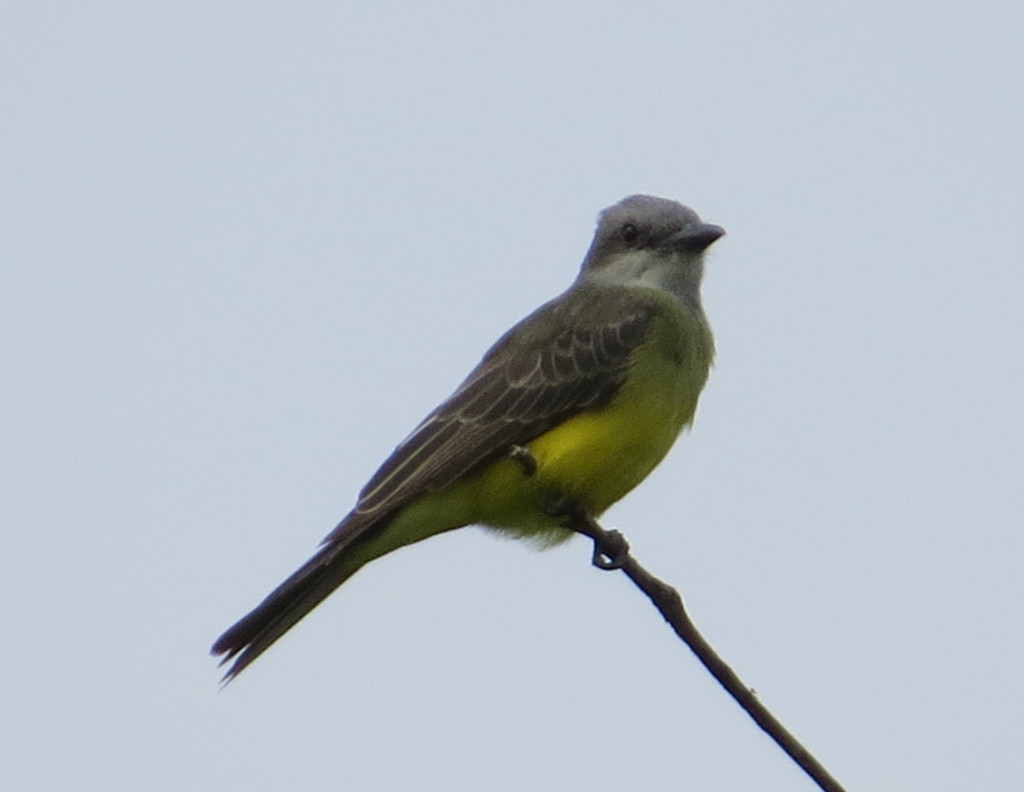 The Kingbird had enough of this low perch and went back to his tall, remote Cottonwood.  I got what I came for and then some, so I hustled back to the van after just a half hour of observation.  After all, Swedish meatballs and a fight loading Ikea furniture in the van were calling my name.