Local birding seems to be what’s in vogue these days. From patch birding to the increasingly popular 5-mile radius birding, birders are discovering the joy of finding new birds for a small geographical (and carbon) footprint.  While I haven’t been sucked into either of those (yet), many of you know that I have been an avid lister for the 864 square miles of Kandiyohi County.  As has been highlighted here, there have been many victories in this regard, and the list has grown substantially.  Even still, some birds have proven to be annoyingly elusive.  Annoying because these birds are regular species that pass through the county (and my hands) every year.  One of these has actually eluded everyone and not just me.  There has been no Kandiyohi County record of Nelson’s Sparrow despite the fact that these birds breed to our north and despite the fact that we have abundant stopover habitat for migration.  Nelson’s Sparrows are recorded on the regular during September migration in all kinds of southern Minnesota counties and in Iowa counties as well.  It didn’t make sense that we didn’t  have one yet. But in visiting with other local birders, no one had really ever looked for them during the prime migration window.

In September of 2017 I started looking in appropriate habitat of wet cattail marshes that butted up to grasslands. There is no shortage of such habitat around here.  The migration window is fairly short, about 2-3 weeks, and in that time I wasn’t able to find one in 2017.  So this past fall in September, I began looking once again.  One Friday after work, I decided to try the best Sparrow spot in the county–Kandi WMA.  I saw lots of Sparrows as I expected, and when I got to one wet spot, which NESP are particularly fond of, I played the NESP song and a bird teed up.  With the naked eye it looked right–I could see orange on the face, but I had to eliminate the more common LeConte’s Sparrow migrant. I hurriedly snapped some pics of the skulker.  All the field marks were there: orange face, sharp bill, median gray crown stripe, and that beautiful clean gray nape. 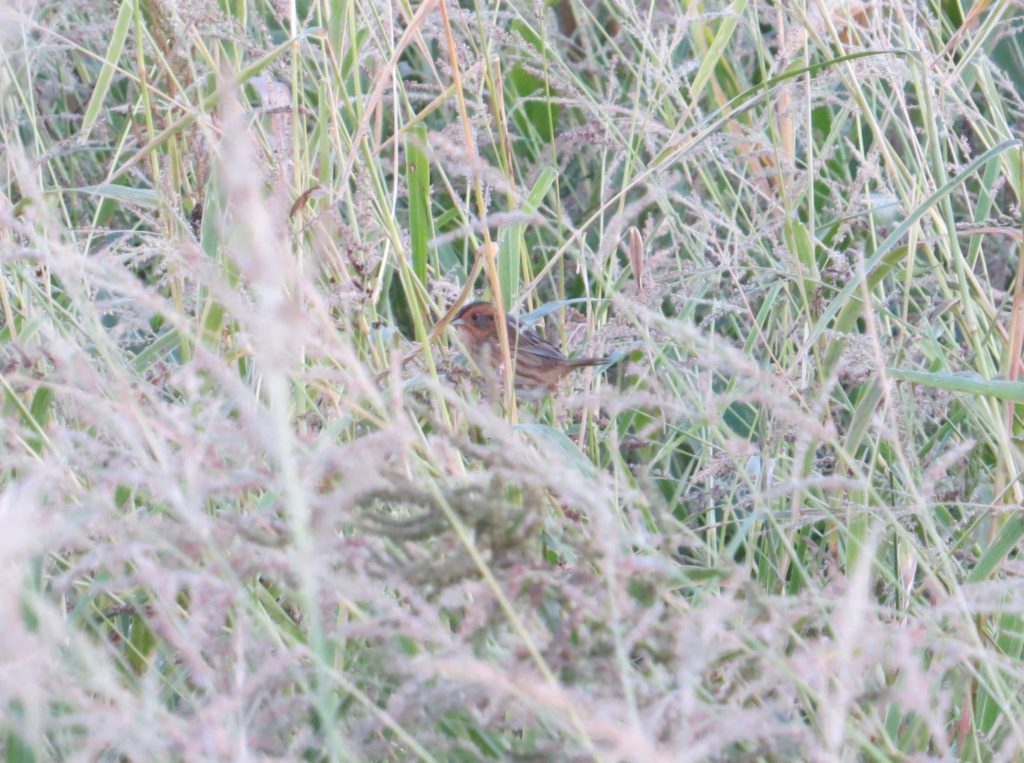 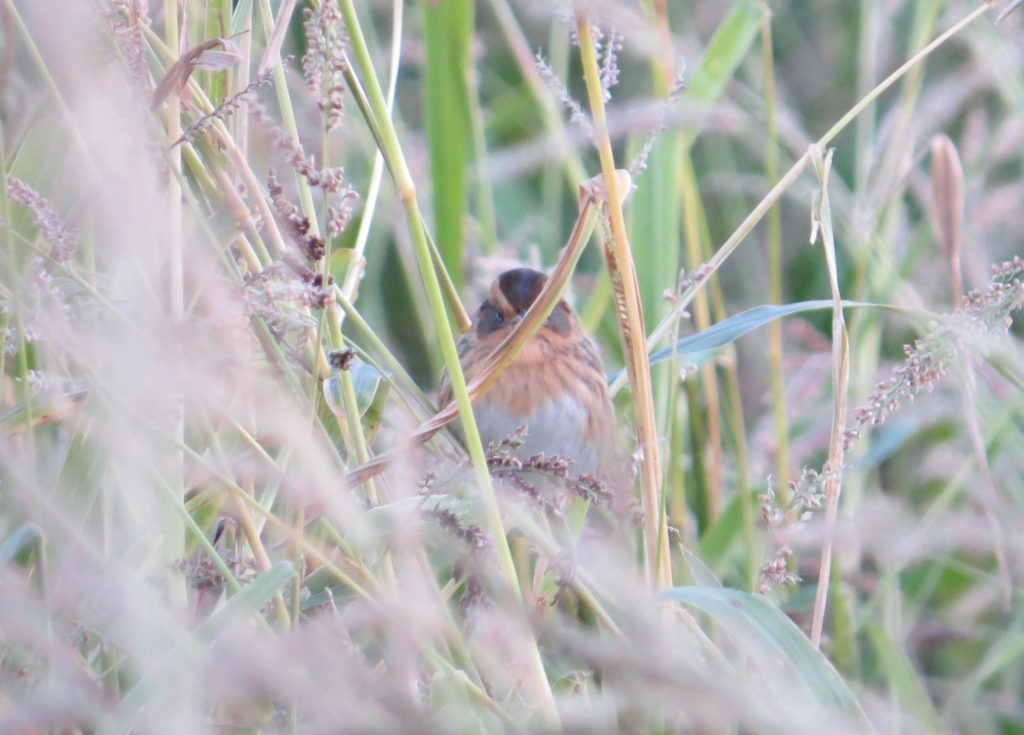 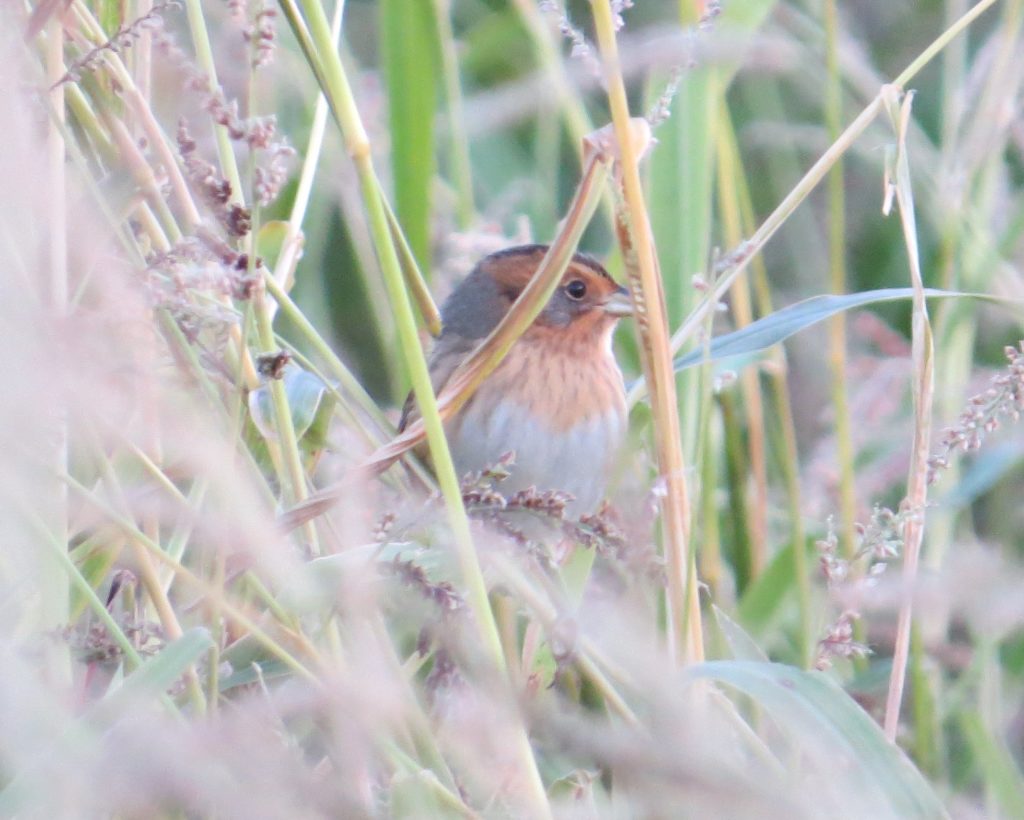 These were the only photos I was able to get which were enough to sufficiently document this first county record.  Thankfully the bird hung on for a few days for lots of people to enjoy and add to their county list, including longtime Kandiyohi listers/leaders Randy Frederickson and Ron Erpelding. It felt good to finally add this bird to the county’s rich birding history.  Everyone agreed it was a long overdue addition.

Not all birds that I need for my Kandi list are needed by the whole crew. In fact, I am alone in my quest for some of them. One such bird is the Ruffed Grouse, a bird once fairly common in the northern part of the county two decades ago.  Today, though, it is akin to Bigfoot.  But that adds to the intrigue of tracking one down.  One day in early December, Randy accompanied me on a fool’s errand of trying to find one.  And we saw as many Grouse as expected, but we did not expect to bump into a Short-eared Owl, a hero bird for the outing even if it wasn’t a new county tic. The experience was made even sweeter by how incredibly cooperative it was. 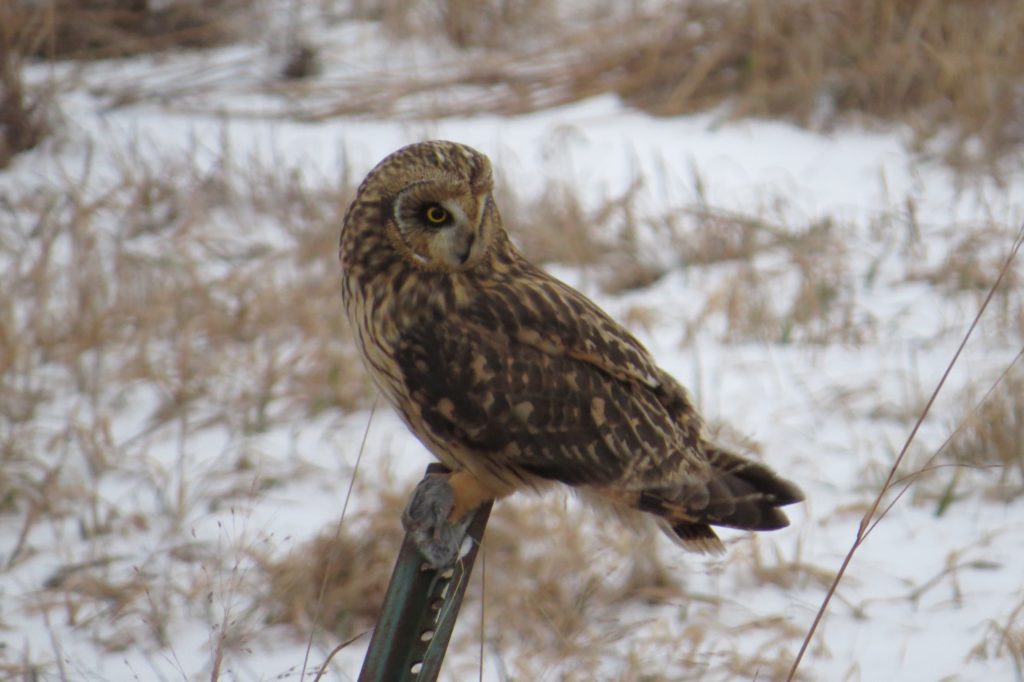 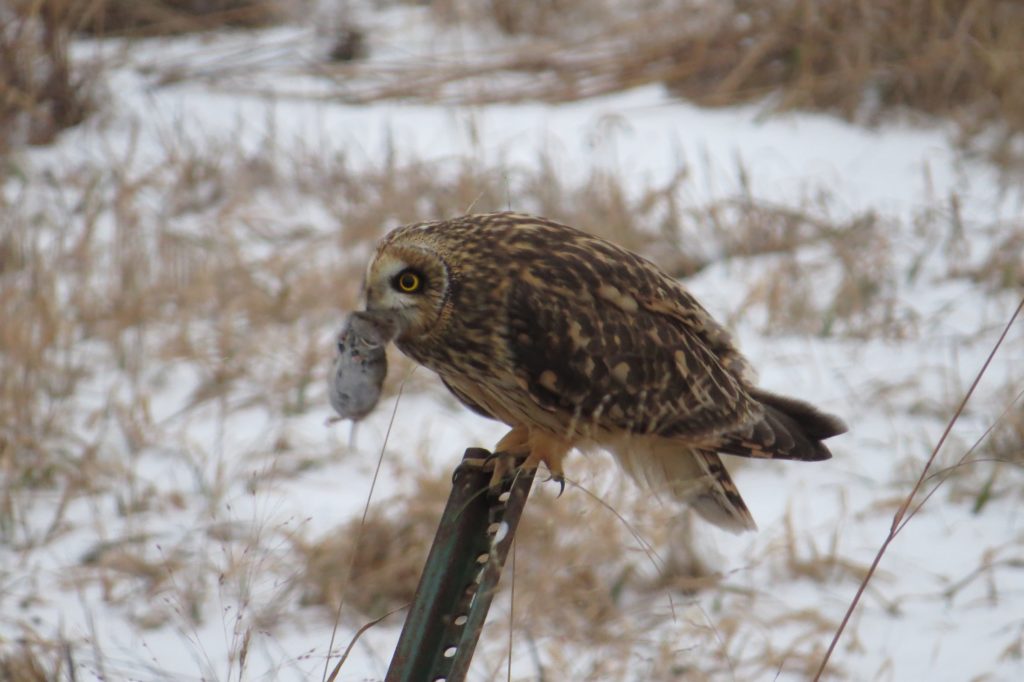 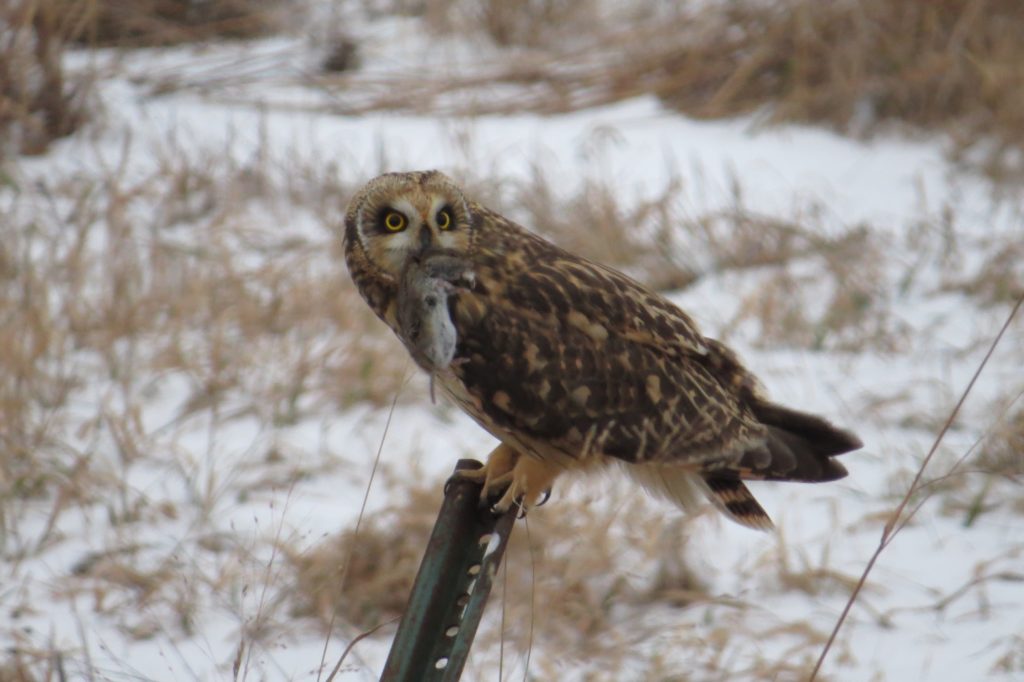 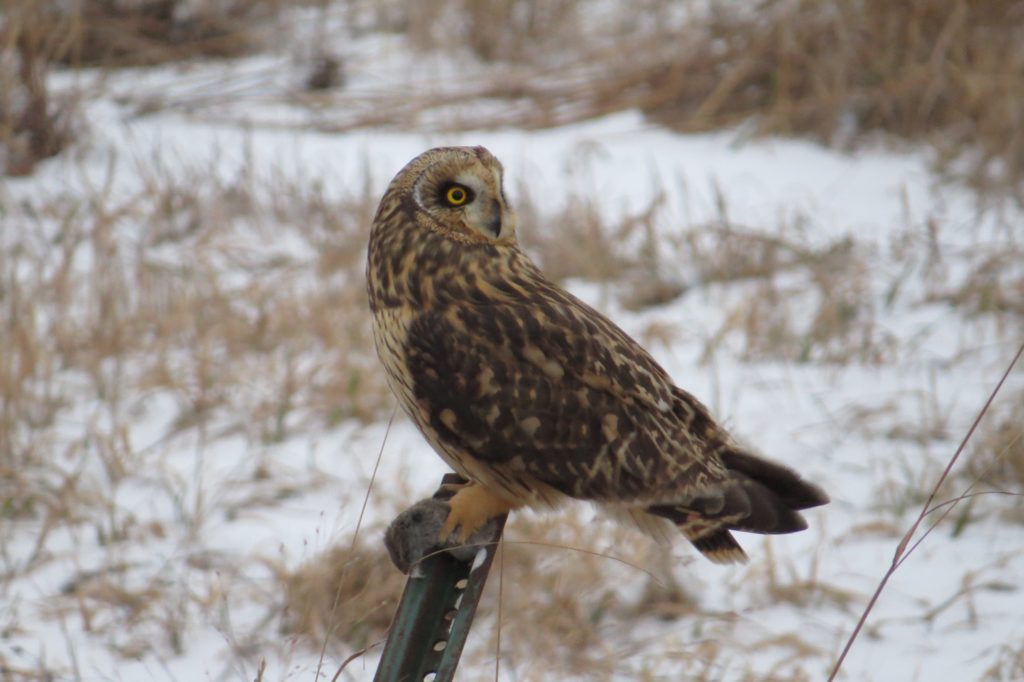 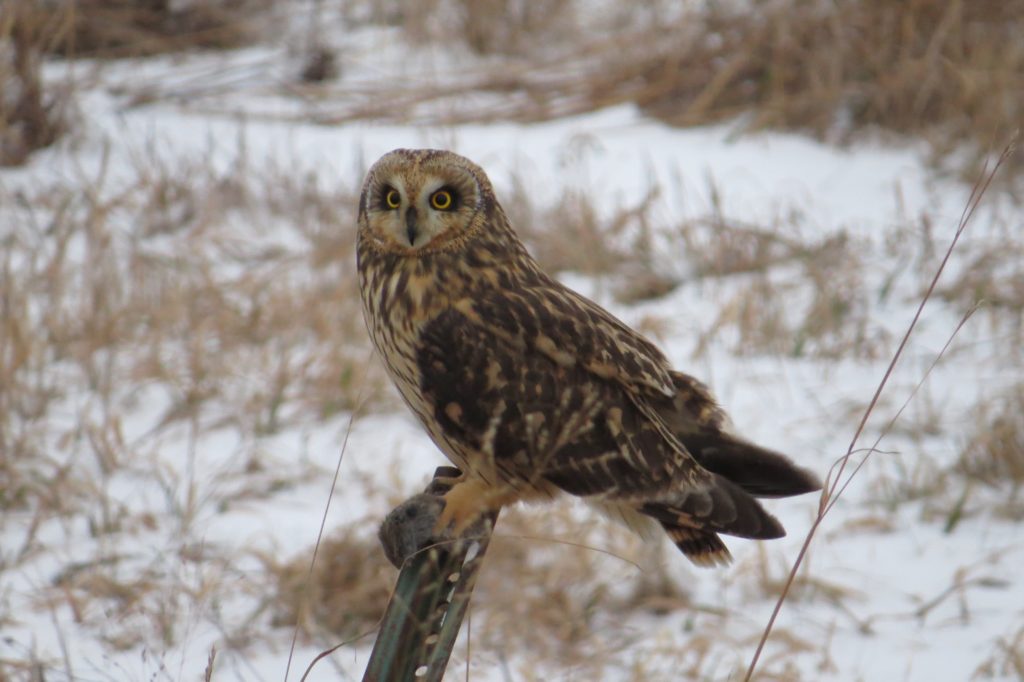 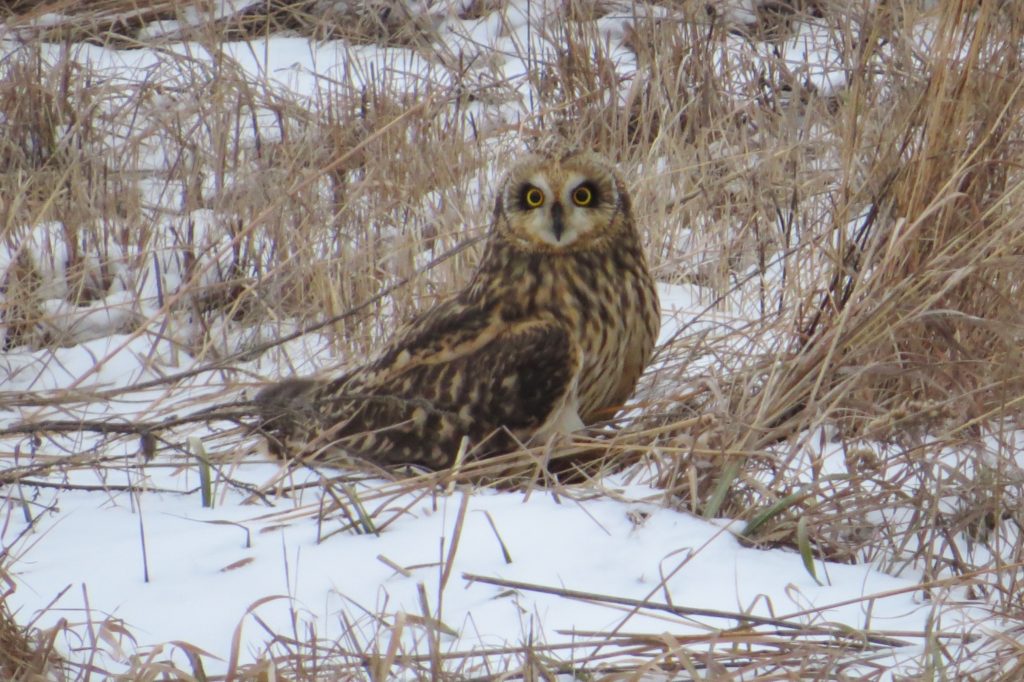 Randy’s been on a hot streak this last year finding several good birds–even when he’s not birding.  At the end of December when he was at Ridgewater Community College releasing a rabbit he trapped, he saw a Robin flock eating crabapples and noticed–without binos–one that didn’t quite match the others.   This Varied Thrush wasn’t a new bird for either Randy or me (my third county record), but it is always fun to see. 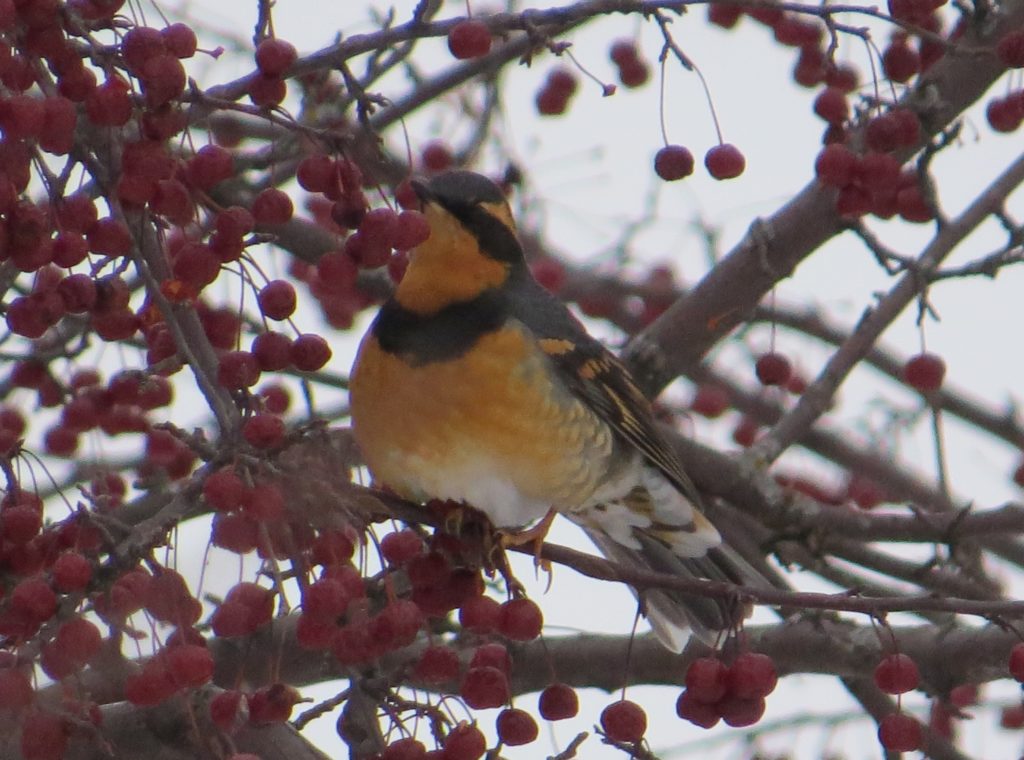 Maybe it was his hot streak or maybe he just wanted me to be out there helping him find new county records, but a week ago Randy started pushing me to get out looking for my nemesis county bird.  He knew I needed to clear this distraction from my birding brain and was therefore keeping an eye on the calendar all while I was getting swallowed up in work and life.  The Northern Saw-whet Owl is very common but incredibly hard to find.  Seeing a Kandi Saw-whet was my number one most wanted Owl after having recently completed the set of 19 American Owls.  I have been searching for one in the county for a very long time. Several times Steve Gardner and I have found evidence of Saw-whet roost sites but never the Owls themselves.  Despite the fact that they migrate through every spring and fall and sometimes winter here, we have never been able to find one.  It was aggravating.

At Randy’s urging, we went out owling after dark one night recently. I was not optimistic because of all the previous attempts and the fact that fall banding reports indicated it was a down year for Saw-whets.  I figured we’d put in yet another attempt to say we tried, and it would be a boring night just like all the other Saw-whet attempts.  I could not have been more wrong.  Randy decided we should try a forested road in the northern part of the county.  This road is famous. To us birders, it is a dynamite spot for forest birds in the spring and summer months. To other locals (and even people nationally), this road is known as one to completely avoid or daringly go down, depending on your view of things that are allegedly haunted.  We birders often go to sketchy and/or disgusting places, so this was no big deal to us.  Apparently it wasn’t to some others as well.  Randy and I were puzzled at another slow-moving car, spotlights shining out the windows, that crept down the road behind us.  Turns out they were four adult ghost hunters from a couple hours away trying to find a different quarry than we were.

Our first listening stop went as I expected. Nothing. I figured a few more times of this: getting out of the vehicle, listening/freezing, getting back in, and repeating and we would call it a night. Well, at the second stop, Randy immediately heard something and asked if that was a Saw-whet or a Canada Goose in the distance. We held our breath and strained to listen, and sure enough, in the distance we heard the faint but rhythmic and recognizable toot-toot-toot-toot-toot… We had done it! The Saw-whet Owl was finally on the list! After some celebratory fist bumps and attempts to call it closer to the road, we owled on.  And at every stop, we kept hearing the flute-like tooting of more Saw-whets! It was absolutely insane. The sound of them seemed like it was coming from everywhere, a perplexing phenomenon in itself, but even more so considering we heard multiple predator Owls (Barred and Great Horned) at every stop as well.  Randy and I were in awe. Not only was it a long-hoped for bird for me, but it was just a stunning display of nature and yet another reminder of how you can still find surprises right in your backyard.

At one of our stops we found a very cooperative Saw-whet Owl that allowed us some good looks. This was also a major goal of mine.  I didn’t just want to tic Saw-whet for the county; I wanted to see it in the county. 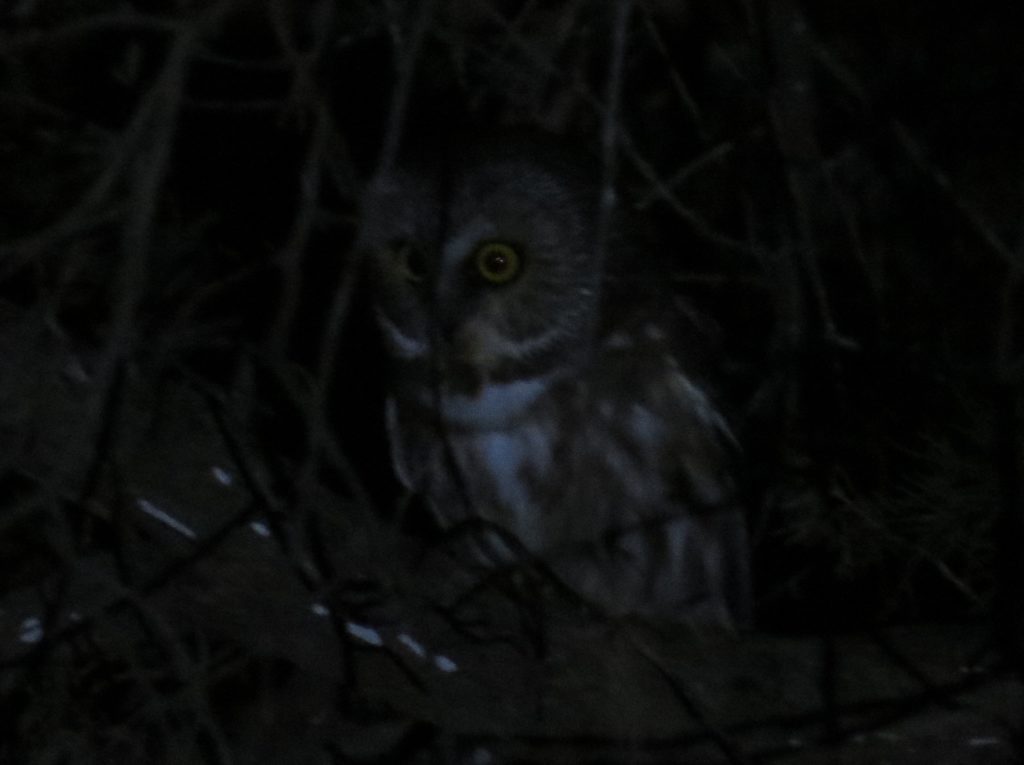 This was an unforgettable night of owling that was made even better by sharing it with a great friend. A huge thanks goes out to Randy for suggesting the outing and for his guiding skills in picking the right week and the right road.  The long-awaited and much-anticipated Owl was officially on my county list, completing my collection of 7 regularly-occurring Owls in the county. Without Randy’s invitation, it is likely that I might not have even tried for Saw-whet Owls this spring because of how busy life has been.

Unfortunately Steve Gardner was out of state when this all went down. When he got back from his trip, he and and I went out there, and we were able to get him a Saw-whet Owl for his county list too.  Steve and I have logged many fruitless trips and lots of hours looking for these Owls as well as other Owl species.  Prior to two years ago, our Owl luck was nonexistent.  Now we had them all, and it felt great.  Steve and I were lucky enough to find a Saw-whet that was cooperative for Steve to get some visuals. 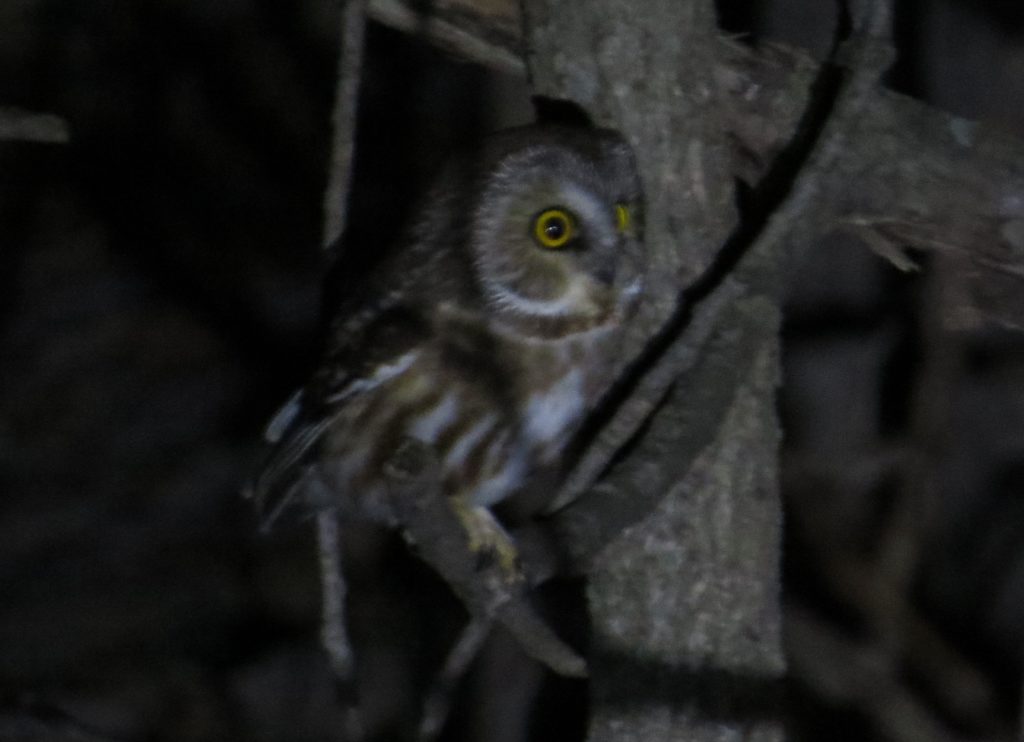 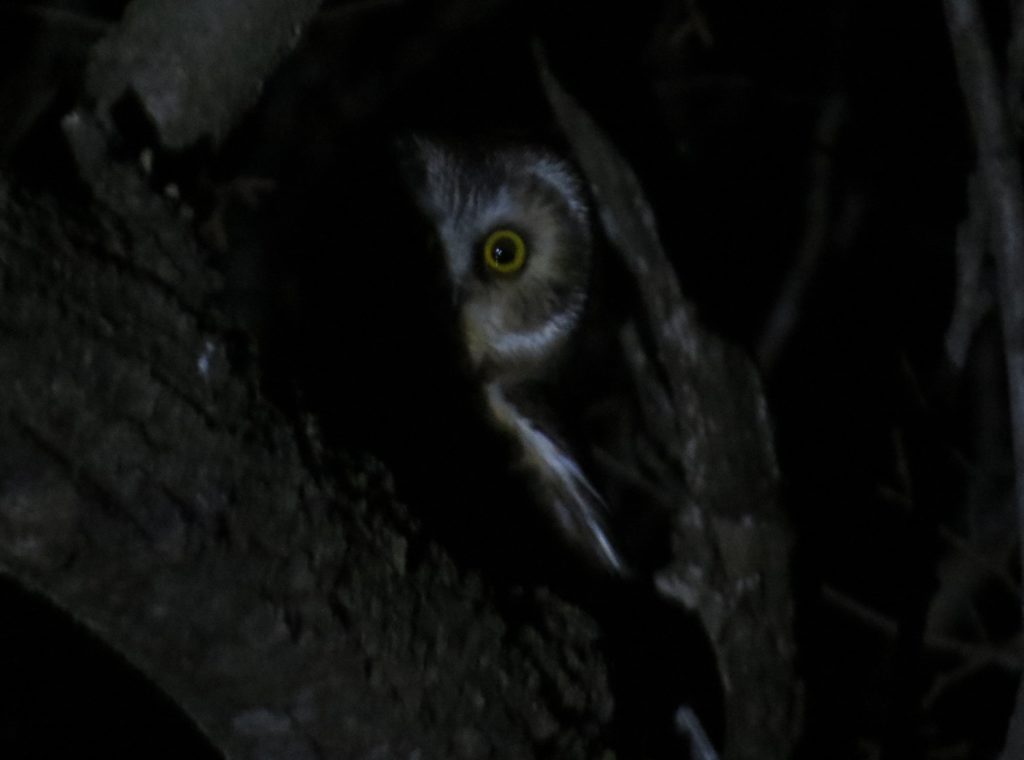 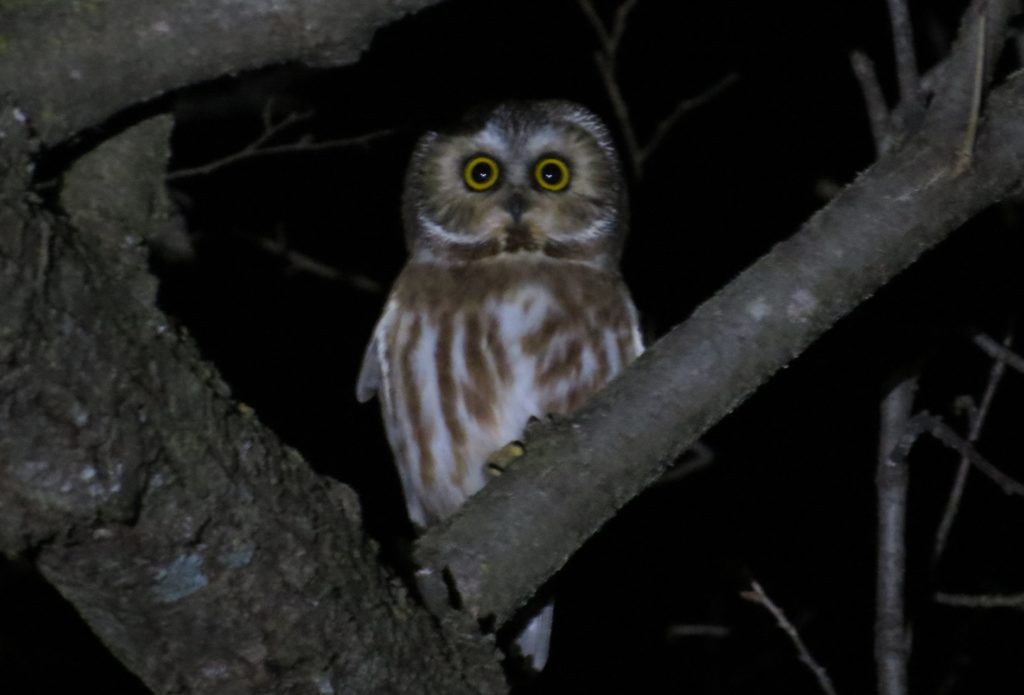 With this chapter closed in the most satisfying way possible, the question of what’s next really is an open one. I honestly don’t know–no other birds on a local, national, or world level have replaced the Ferruginous Pygmy-Owl and Kandi Northern Saw-whet Owl.  There is a strange new void where a nemesis should be.   But maybe that’s the way Randy wanted it–a clear head so I can start focusing on another bird that should be on the county record, like the Black Scoter.