You already know that birders are an odd bunch, but you may not know that they are even more so on New Year’s Day.  This is the day that a brand new year list starts and with it all kinds of eccentric behaviors.  Birders often report to one another what their first bird of the new year is.  Some, like me, squint when looking out the windows in the morning so that first bird might be a bright red Cardinal and NOT the dreaded House Sparrow.  (Mine was a Crow this year–ick).  Some birders go flying out of the gate (and all across the state) to put up a massive total of species on that first day as if to tell all others who aspire to be the top birder, “Don’t even think about it.” I’m not sure where Duluth power-birding couple, Larry and Jan Kraemer, fall on the spectrum, but they were out birding on 1 January.  And they sent shock waves through the entire Midwest birding community with a jaw-dropping confirmation of Scott Wolff’s suspected Ivory Gull.

No, no, this couldn’t be…I had just finished writing a recap post of 2015 where I concluded by saying I wanted to mellow out my birding in 2016.  But on the other hand, HOLY SMOKES I’VE GO TO GET TO DULUTH!! To the uninformed, the Ivory Gull is from the high Arctic, the land of Polar Bears and Santa Claus, and has only been to Minnesota a handful of times.  It looks like Minnesota and Wisconsin Birders have been good this year because Santa dropped off quite a present in Canal Park. 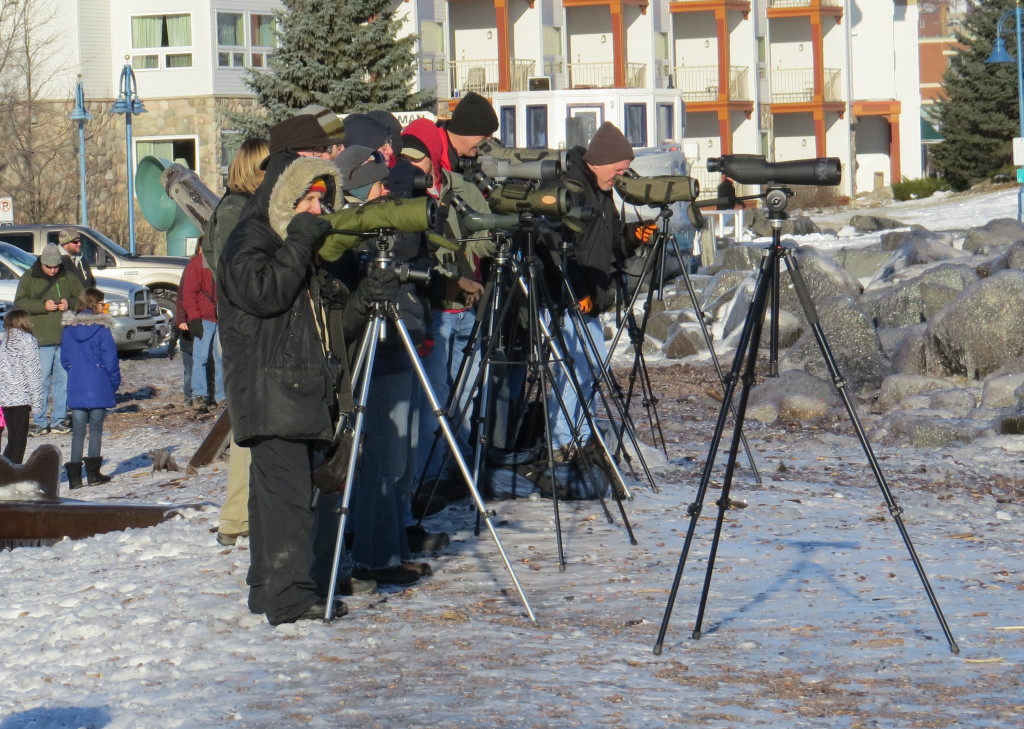 Willmar, of course, sent its own small delegation of eager birders to the Great Birder Assembly.  Joining me in the pursuit of a shared, epic lifer were Randy Frederickson and Joel Schmidt.  The gathering also gave my yearly and life birder lists a boost. 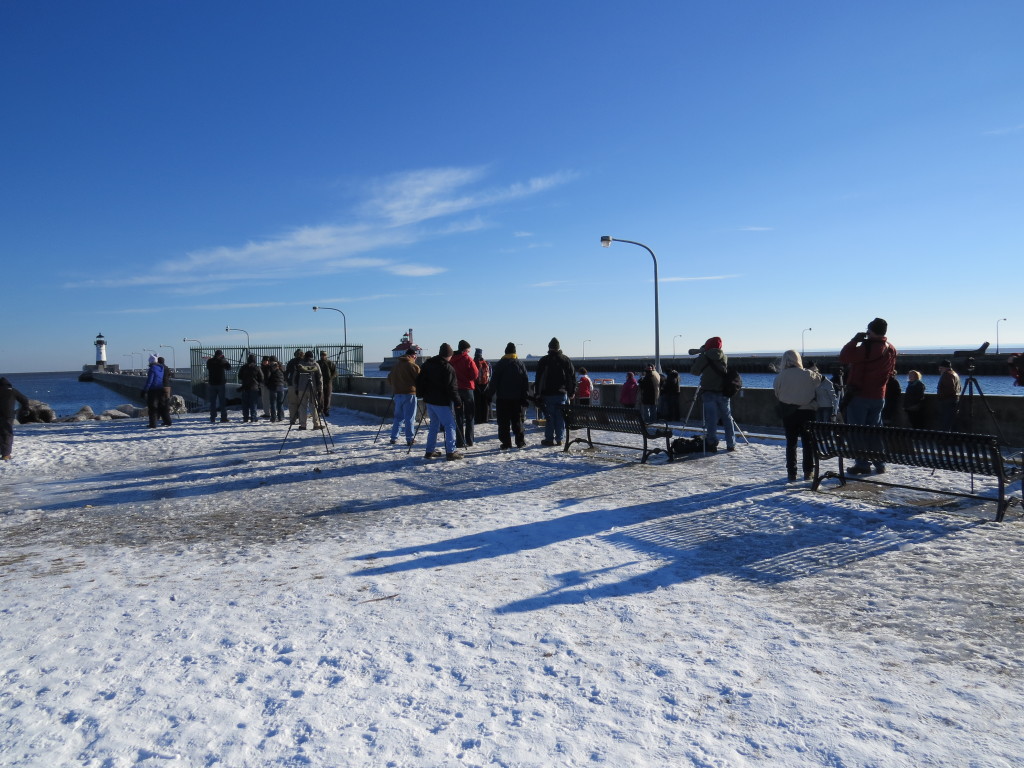 Here’s what all the fuss is about: 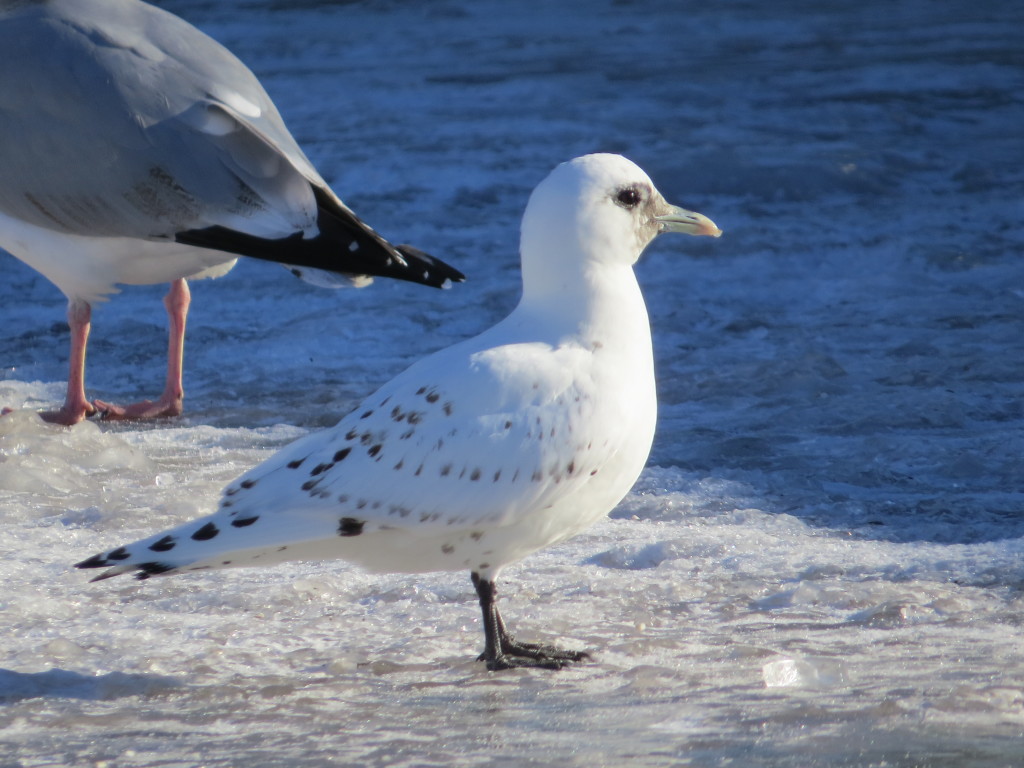 What I noticed immediately about this striking, immature bird was the black mottling on the back and wings of this immaculately white bird and how this black/white combo  resembled the plumage of a Snowy Owl or a white-phase Gyrfalcon–all birds from the far north. 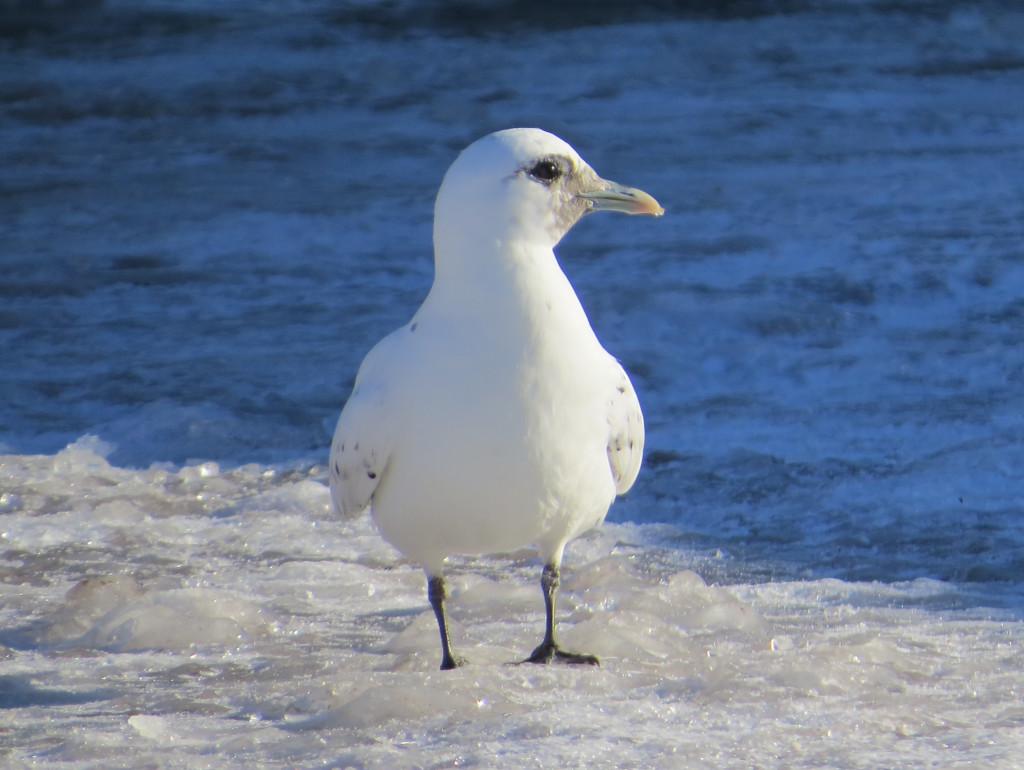 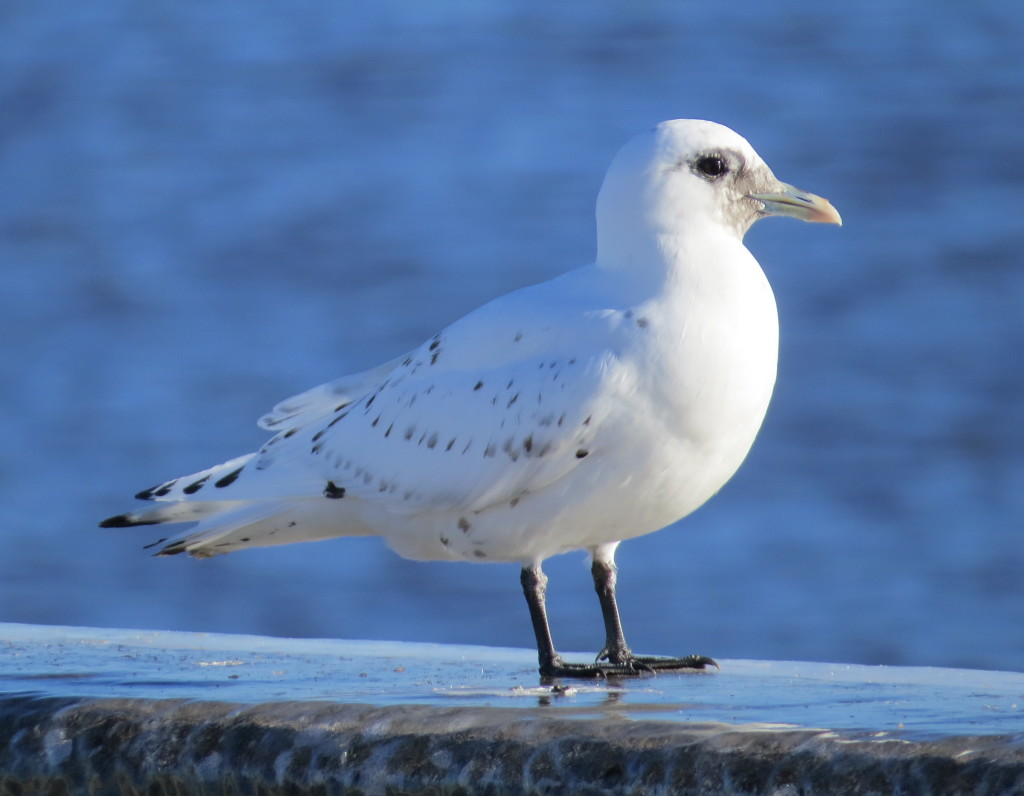 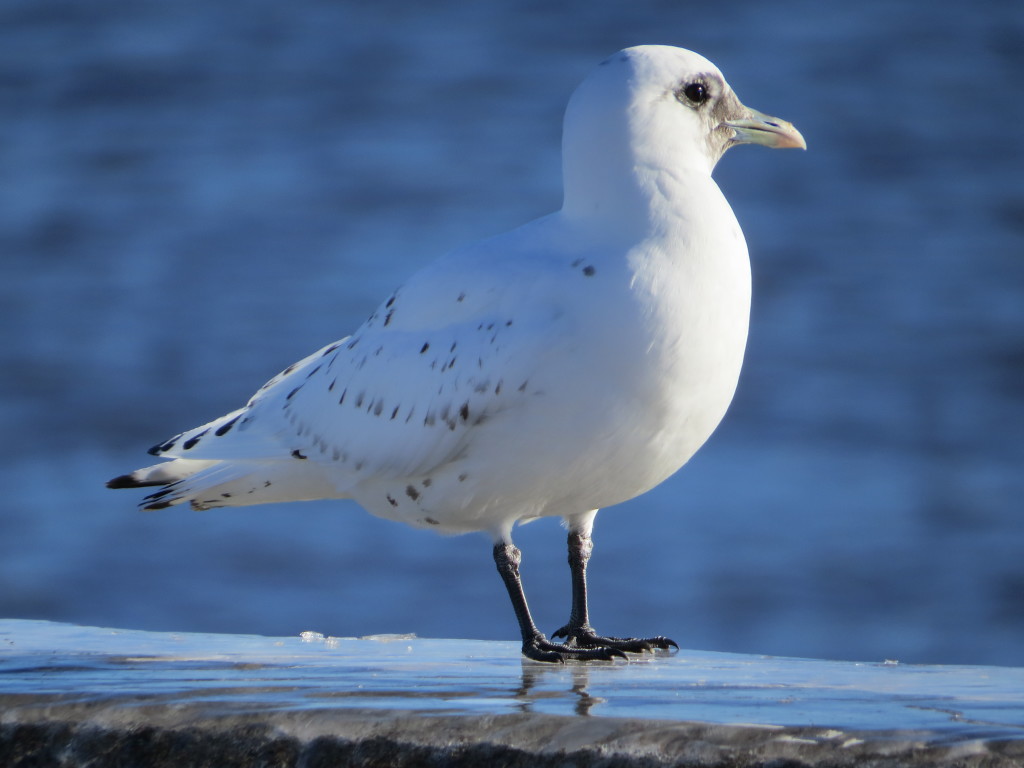 Conditions for viewing the IVGU were awful: wave action from Lake Superior had created a thick glaze of ice over every place an observer might stand.  Never have I feared a concussion or wished I owned cleats more.  It was downright dangerous. Even the Ivory walked with trepidation. 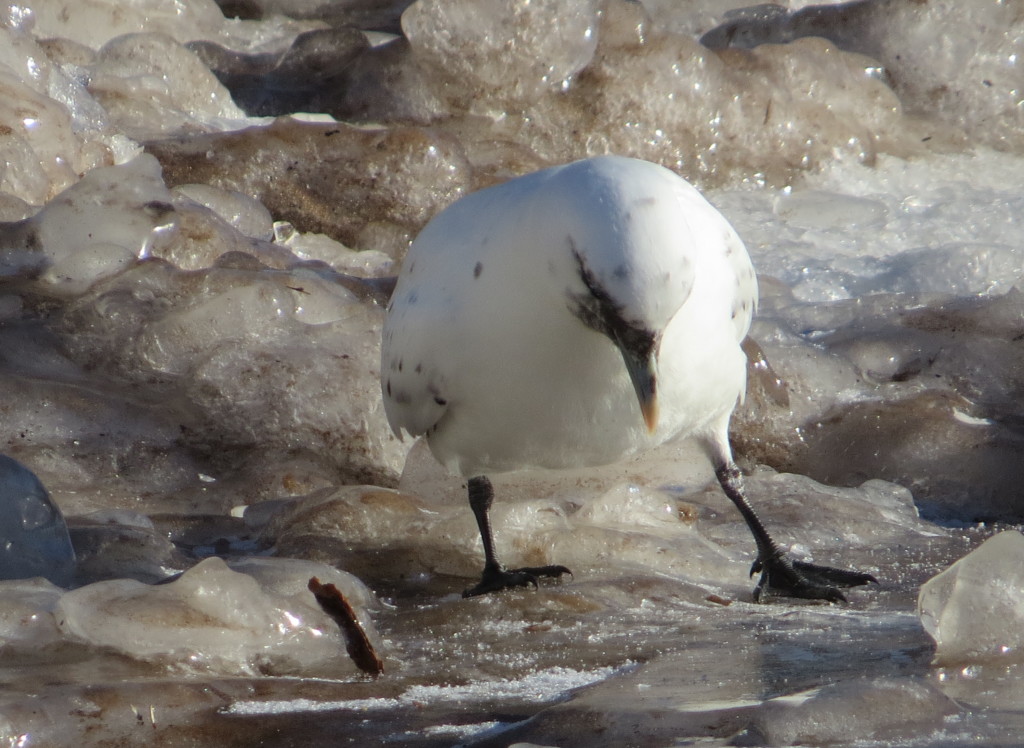 At one point a birder next to me didn’t really know how to proceed off the icy knoll on which we stood.  I was getting annoyed with his prolonged hesitation.  Then I felt like a complete jerk when the older fellow asked me if I would take his arm and help him down.  As I gripped his quivering arm, I realized that this could be me in 30 or so years.  It was a reminder of how quickly life moves and why events like this are so important, why we need to experience the phenomenal while we can.  Going with friends, like Randy and Joel, make it even better, especially when celebratory beers are had at a place like Bent Paddle Brewhouse.

Before that celebration, however, there were many other birds to enjoy at Canal Park.  This adult Iceland Gull (center of the pic)  was a lifer for Joel and the first adult I had seen. 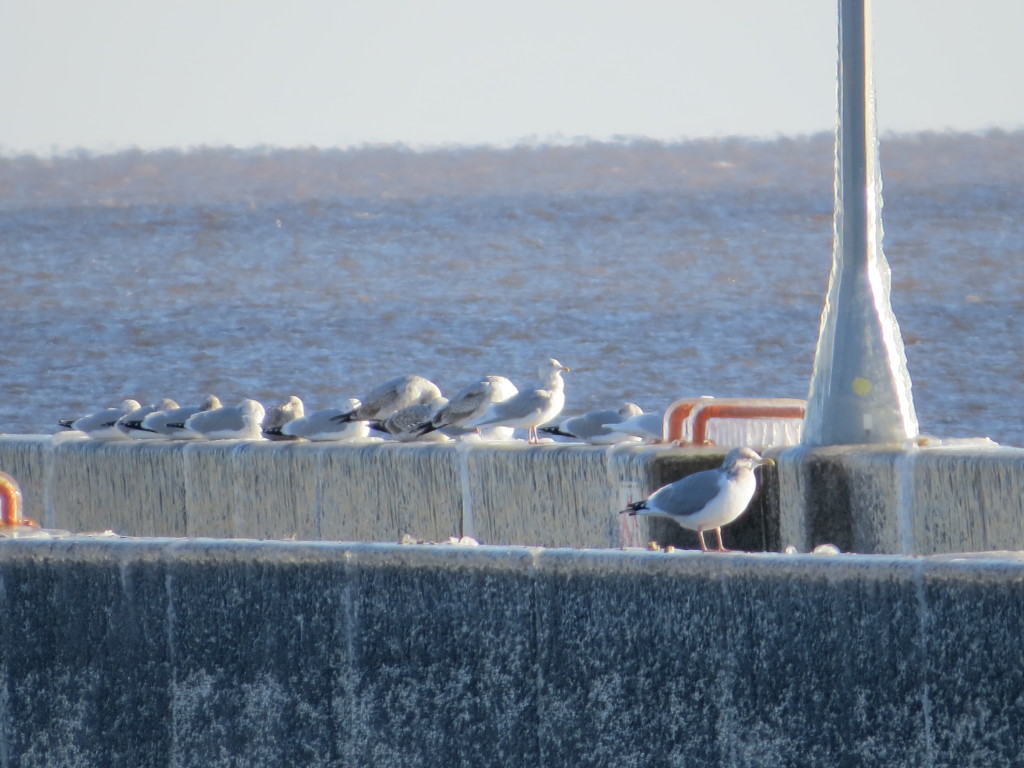 Here was an immature bird that is Thayer’s/Iceland intergrade.  The local Larus Jedi call him Stumpy because of his missing tail. 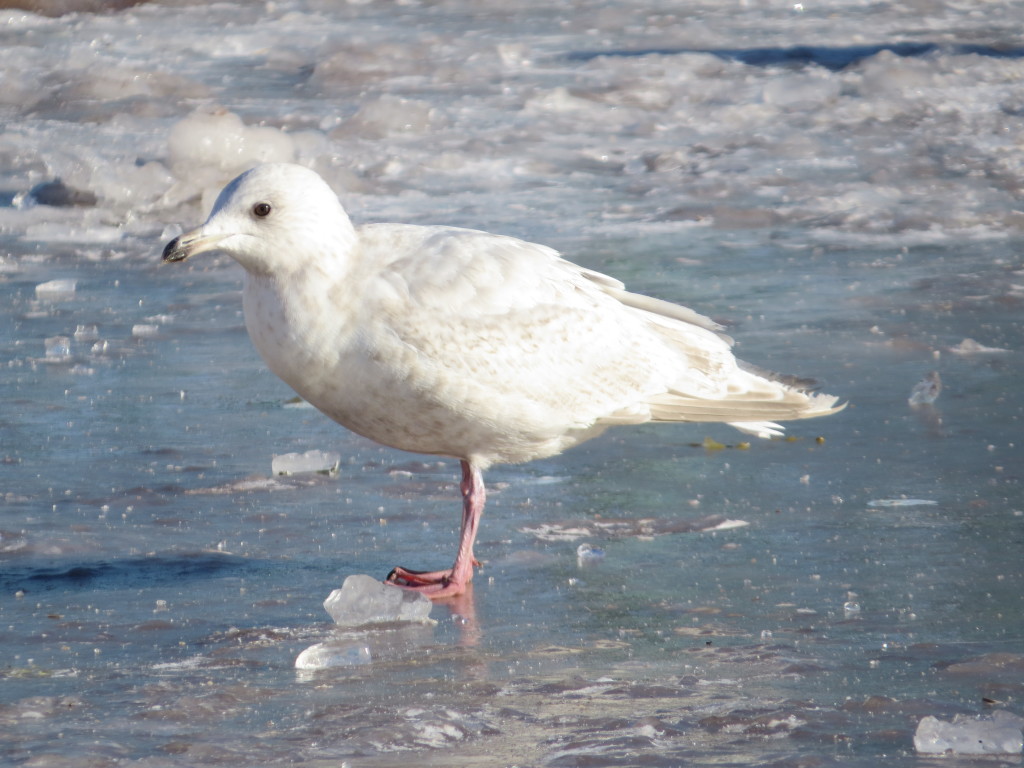 We did see a couple of adult Thayer’s but no Glaucous Gulls this time.  Since I got the full Gull smorgasbord a month ago, besides the Ivory I was most excited about all the American Black Ducks.  I counted well over a dozen among the 300 Mallards.  They really do stand out and the proximity and sunlight made them especially photogenic on this gorgeous day. This is a duck I just don’t see enough, so this was quite enjoyable. 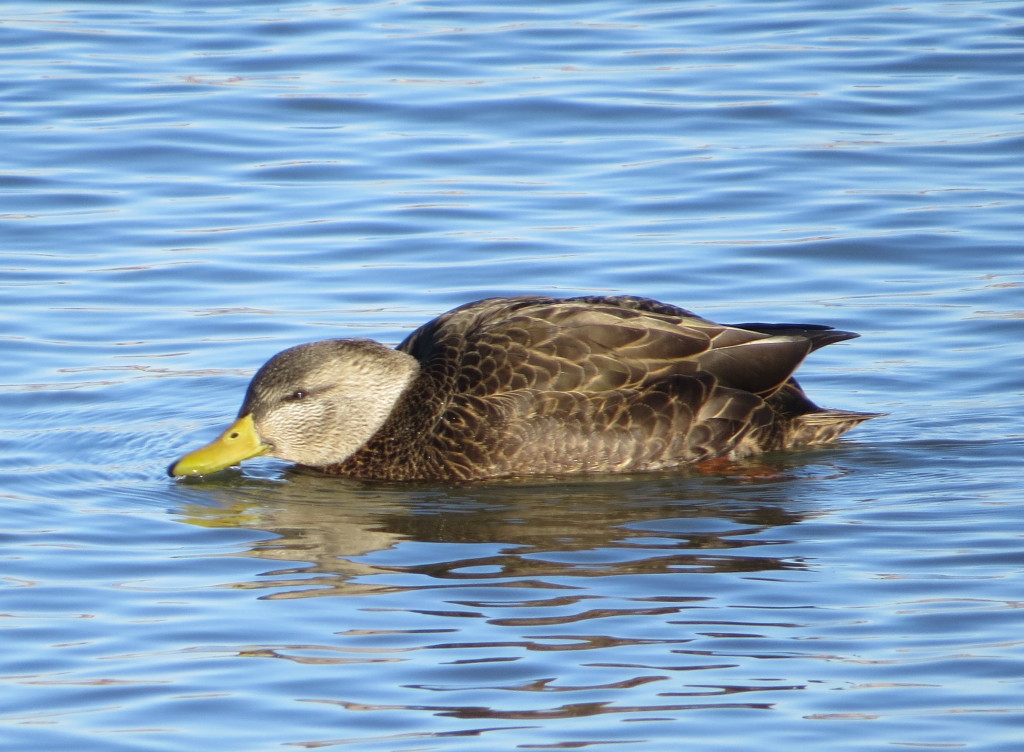 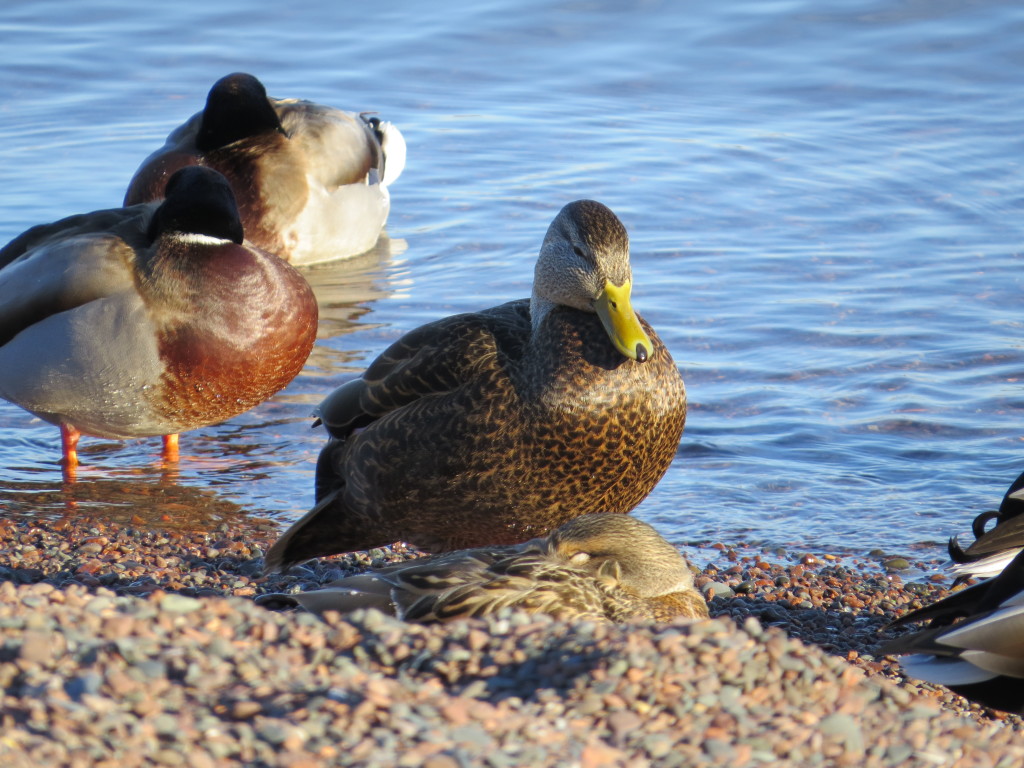 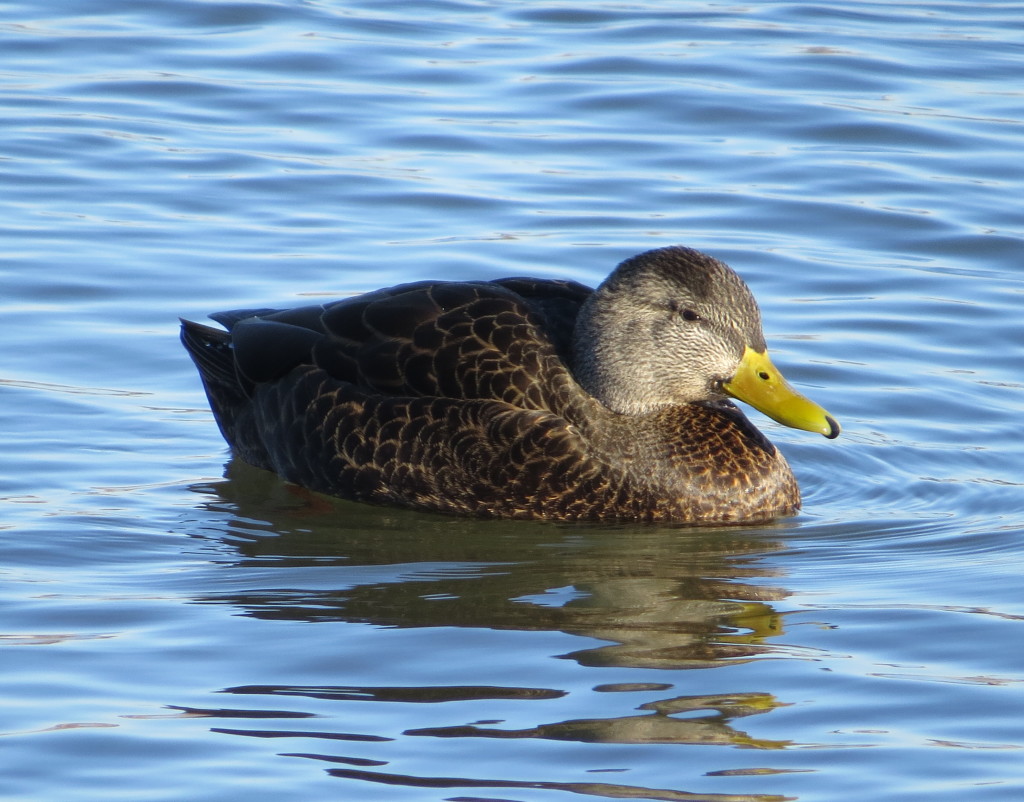 We lingered around Canal Park for a couple hours hoping to find Joel a Great Black-backed Gull lifer, but it just wasn’t in the cards.  What was in the cards was the arrival of the longest ship known to the Great Lakes, the 1014-foot long Paul R. Tregurtha: 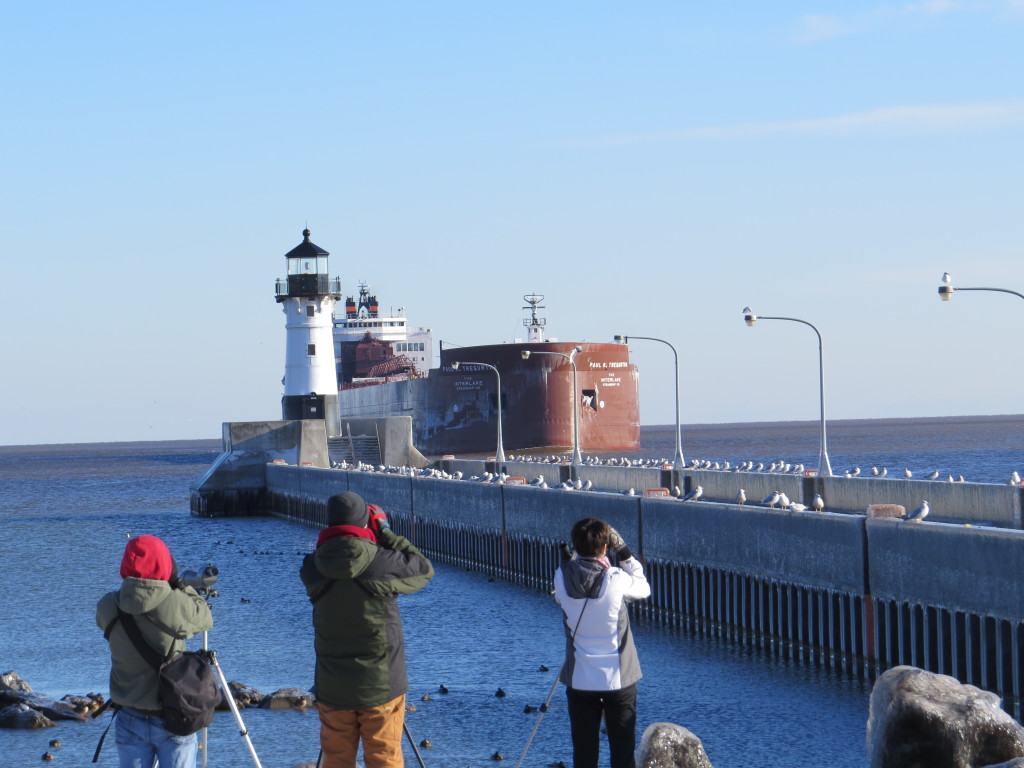 I have to tell you how much my family has wanted to see a ship, any ship, pass through the canal, under the lift bridge, and into Duluth Harbor. Evan especially has wanted to see such a thing.  How I wish he was along to see this!  He may not care about the Gull now, but this would be a heart breaker for him. We have chased ship arrivals before.  Once we were at the top of the hill in Duluth, saw a ship coming in, and raced down to Canal Park only to find it had already made it through the canal.

You can see in the above photo that the birders were not impressed and still had their vision trained on the Ivory Gull sitting on the breakwall.  Despite seeing more birders than I’ve ever seen before, the birdnerds were quickly outnumbered by hundreds of shipnerds that materialized out of nowhere. It was kind of fun, actually, to trade nerd info with a couple of 60ish ladies.  They told us all about their ship; we told them all about our Gull.  I didn’t get goosebumps like my shipnerd mates when the Paul R. Tregurtha saluted the lift bridge with its loud horn, but I was impressed nonetheless. 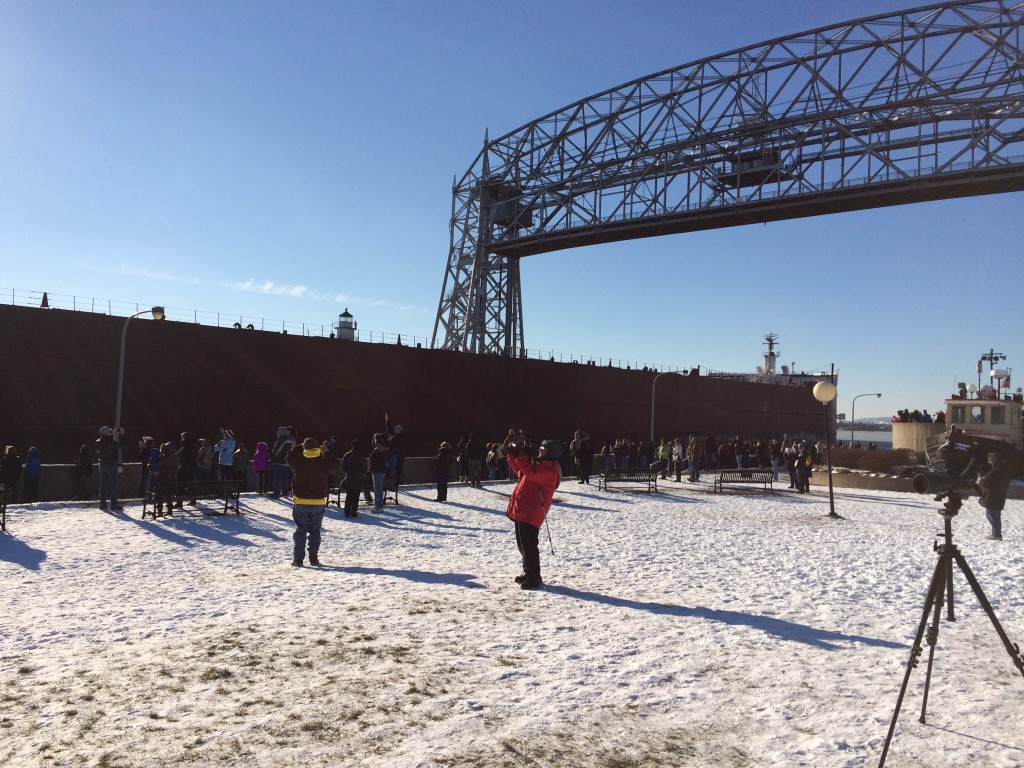 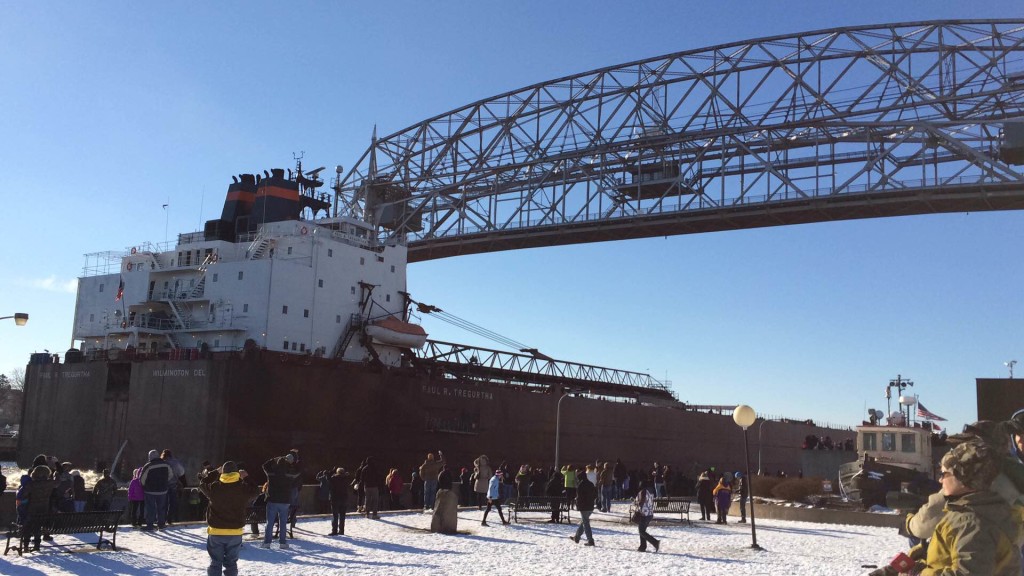 An accidental rare species from the Arctic and the largest ship on the Great Lakes coming in to port made for a most exciting outing.  We had one more errand that would put this day completely up and over the top–crossing the Blatnik Bridge to Superior, Wisconsin to pick up a 2016 Gyrfalcon!  In less than a year’s time I have seen three Gyrfalcons, which still is not enough because like Jello, there’s always room for Gyr.  Photos at this distance were practically impossible, but I’m okay with that. 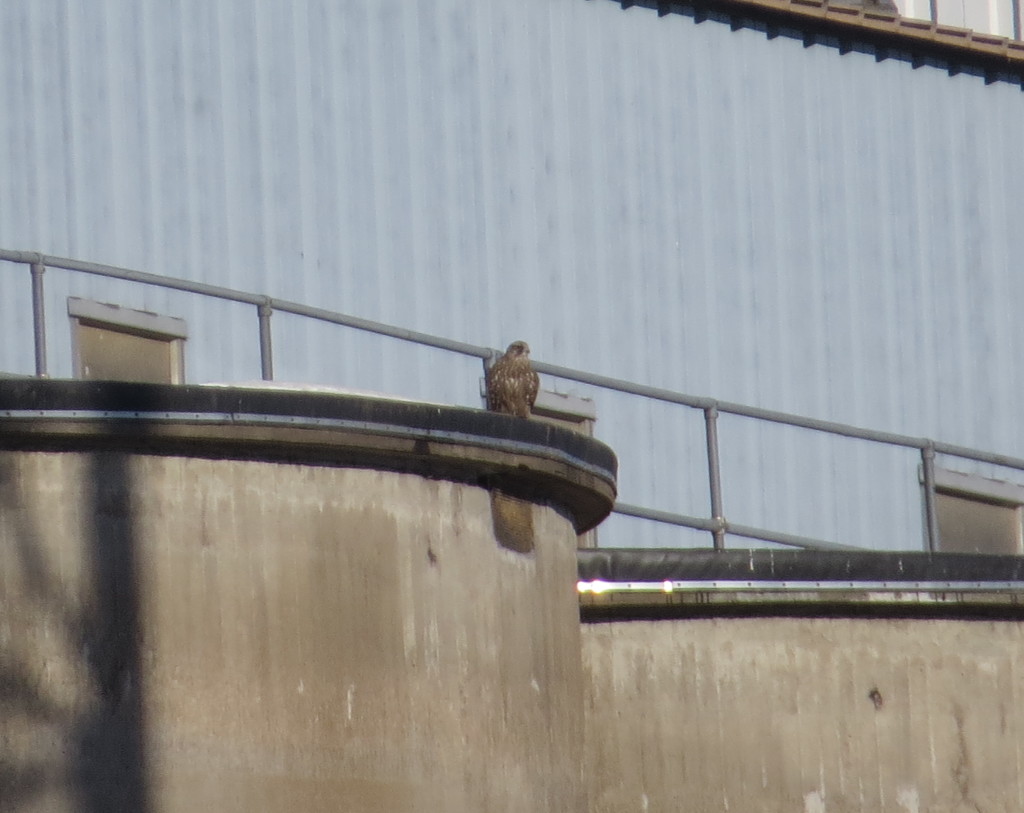 2016 started off with a bang.  I shouldn’t be surprised but I always am by the unexpected things that show up.  That’s what makes this hobby so horribly addicting.  While we wait for the next twist or turn in this new year of birding, a highlight reel of my 2015 will be served up next.

Since the above post was written, two noteworthy developments have happened in the Ivory Gull story.  They are each titled below and are well worth the read, especially the second (WOW).

I had never considered just how perfect of a chase this was until my companion Randy Frederickson posted a thank you to the Duluth area birders on the listserv.  It is not often that the birding guru posts, but when he does it is humorous and eloquent.  Enjoy.

Another wonderful bird found by Duluth area birders, but so much more. Not only a “lifer” for most of us, but how often does a chase end up where you park in a public lot for free, walk 60 yards and get phenomenal looks at your target bird? Throw in a heated visitors
center with clean bathroom facilities and could it get better? Well yes; make sure the report goes out on Friday to give us all a weekend to travel and have the bird frequent the same area long enough that almost no one can miss it. Now place it on the top of a cement wall about eye level and color it in such a way that it stands out amongst its contemporaries. Next, turn up the outside temperature so it runs about 8-10 degrees above the winter average. Heck, let’s do it on the 1st of January so the new year has an avian prelude.  Lastly, have the target bird show up among some of the most generous
(of time and talent), and Laridae literate folks in the upper Midwest and there you have it, the perfect chase hosted by wonderful birding brethren. If there is reincarnation after death, I’m coming back as an Ivory Gull and heading to Duluth for unrivaled recognition and camaraderie (but could someone please tell Peder I prefer Walleye)?

Hundreds of birders have seen the Ivory Gull and many more had been making plans to get to Duluth, even coming from far-off places like Toronto and Tennessee.  Imagine the utter shock, then, when news came out today that the Ivory Gull was a victim of a predation found dead and ripped to shreds under the Blatnik Bridge on the Wisconsin side!  Here is the photographic evidence on Laura Erickson’s blog.  I didn’t feel too sorry for those Wisconsin birders who greatly envied us Minnesotans for such an addition to our state lists.  Still, an unknown and now dead IVGU on their soil on top of a fresh Packers loss to the Vikings? Ouch. I was, however, really bummed out for Gordon and Tommy as I hoped this incredible lifer would be here waiting for them in three weeks time.

A short time after that initial report, the even more unthinkable happened–someone was declaring that there was an Ivory Gull at Canal Park!  This meant one thing and one thing only: TWO Ivory Gulls, both immature birds, had hopped aboard Santa’s sleigh and were in the Duluth area.  Simply incredible. The Duluth News Tribune caught wind of the drama after the death of the first bird and had to change their story as events were unfolding.  In fact, it is their #1 trending story right now.