The birding on March 31st was like drinking water from a fire hose.  Not to belabor a point, but I was also super sick and just wanted to rest after lifering 23 times earlier in the day with Tommy DeBardeleben and Gordon Karre.  As I was resting in the hotel room, Evan jolted me back into birding mode when he hollered, “Dad, I see a Barn Owl!”  I was skeptical but his voice was rising, “Yeah, yeah, I do!”  I went over to the window he was looking through and saw the distant silhouette on another roof of the hotel complex a couple hundred yards away.  Zooming in with the camera I saw that Evan indeed saw an owl, but it was the Great Horned variety. 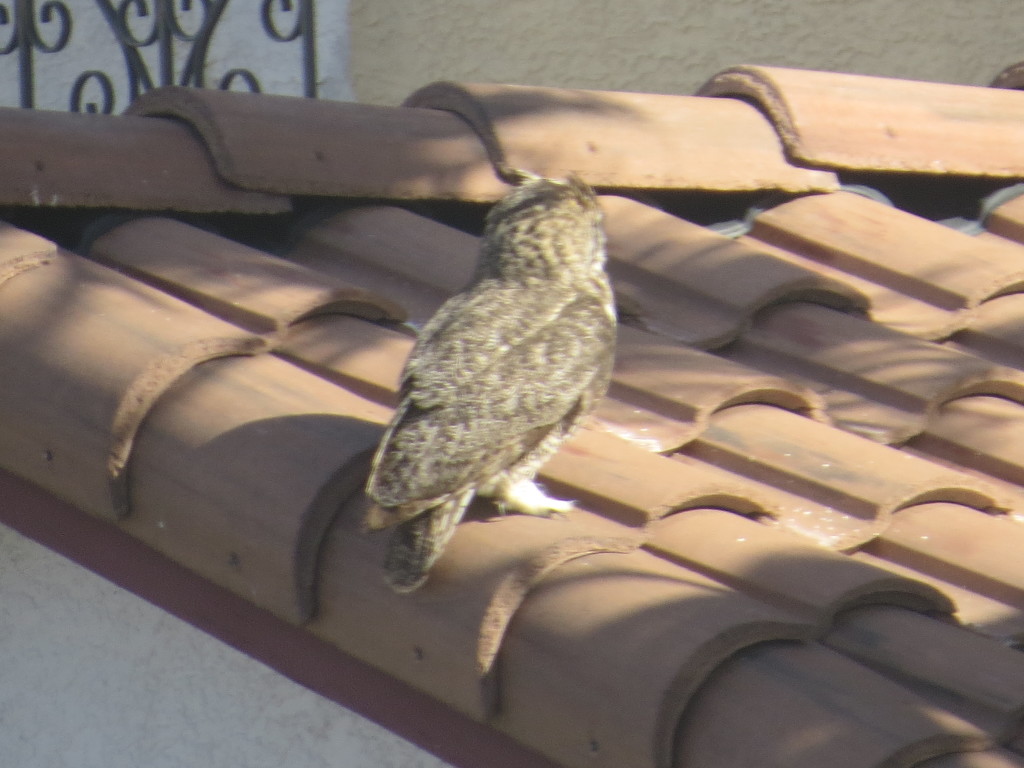 Any owl is a fun find, even a GHOW in SE AZ.  No, it wasn’t our Barn Owl lifer, but it was still a great sighting.  At least Evan was cognizant that we were in the right country for Barn Owl as it’s not a bird we are likely to ever get back home. We saw the owl fly a short distance into a third-story alcove, so Evan and I raced out the door to see if we could get closer looks at the owl.  We realized that we could actually ride an elevator to the third floor and look out a window right by where the owl landed.  Excitement stirred as we crept up to the window, expecting to look down at the owl just a couple feet away on the roof below.  Somehow the owl gave us the slip, but look what we found!  The figure in the background is a very fresh owlet–you can see its tiny gray beak by the stucco wall.  The other white blob may be an owlet or part of the food cache. 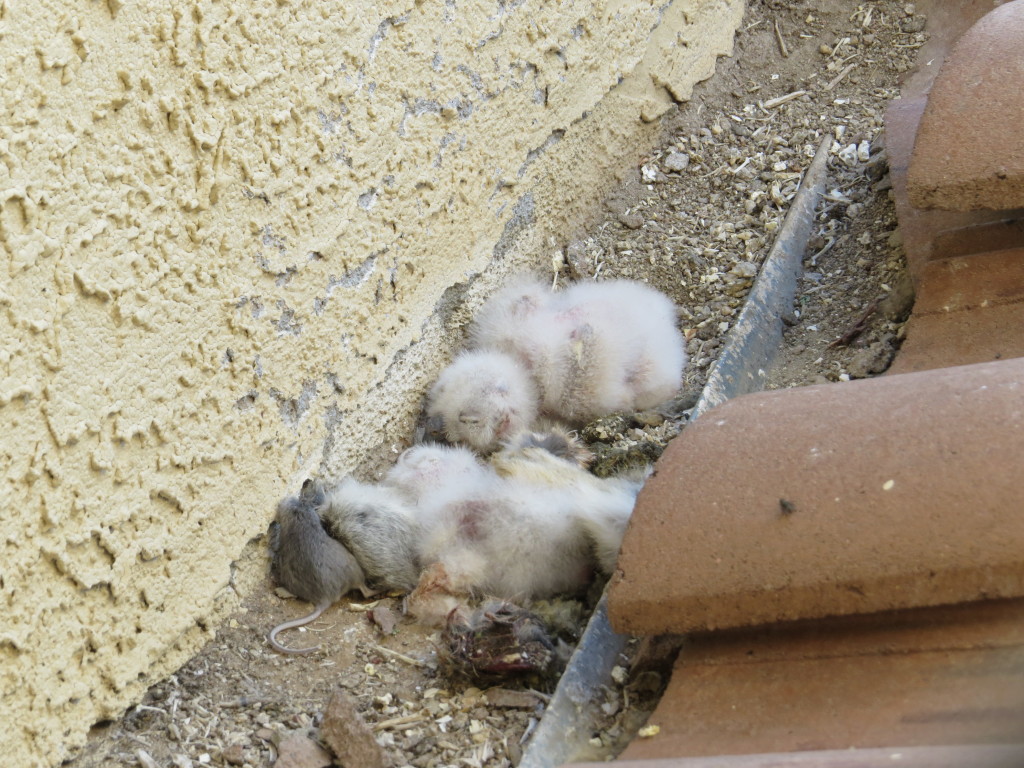 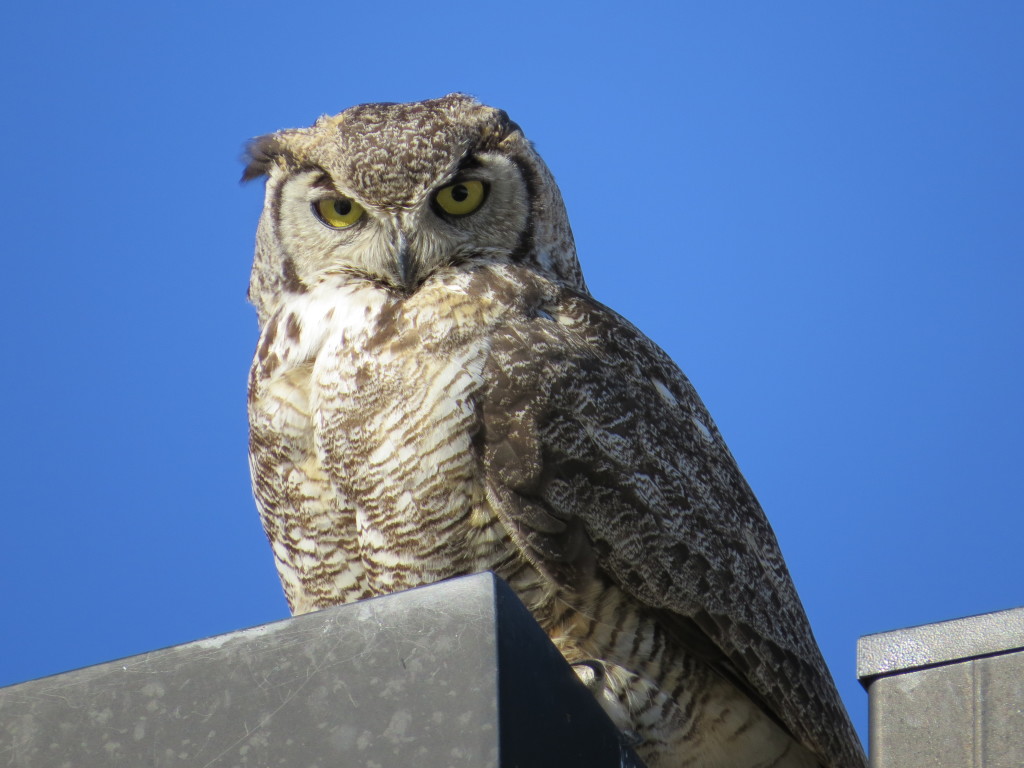 Whenever owls are involved, one should always give credit where credit is due.  Here is the discoverer admiring his prize. 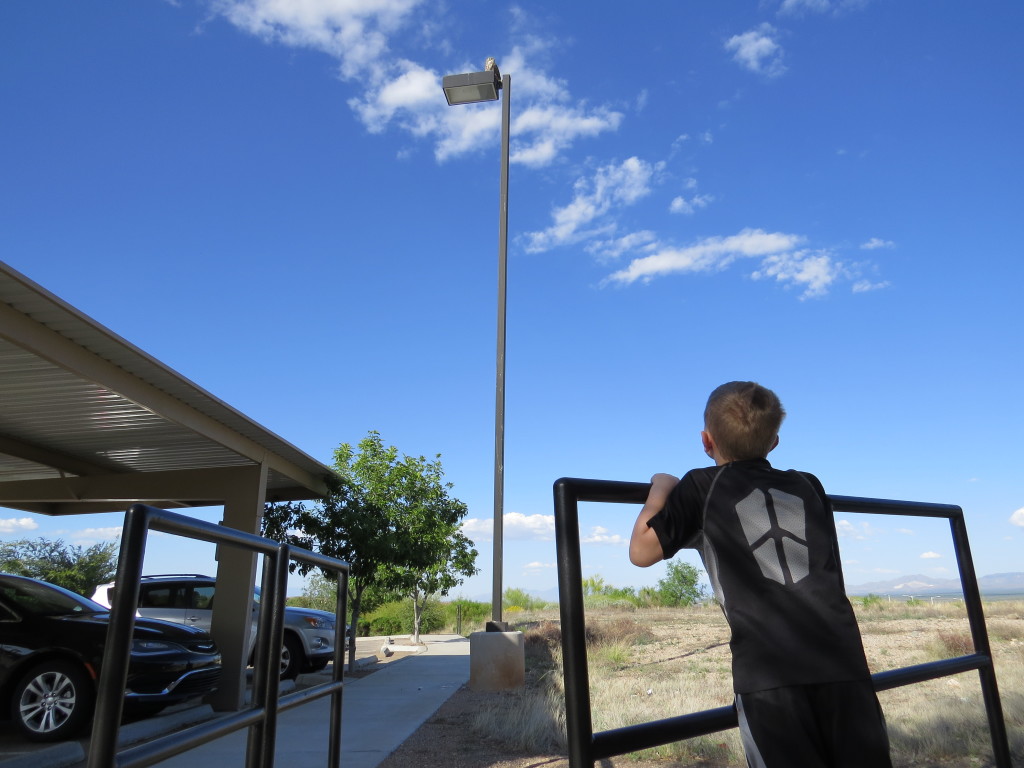 What a gorgeous creature this was and a cherry on top of one heck of a day of birding in SE AZ. 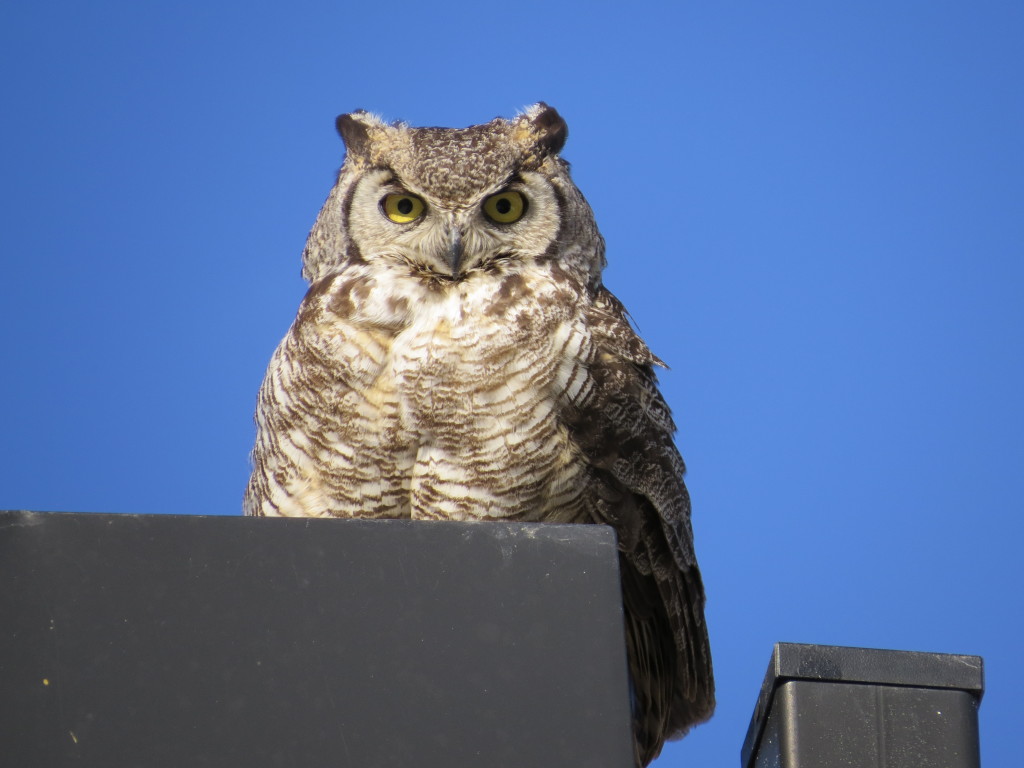 It surprised me to see a Great Horned Owl in the day like this and so unafraid.  Putting up with tourists is just one of the prices you pay for choosing such a posh and scenic home. 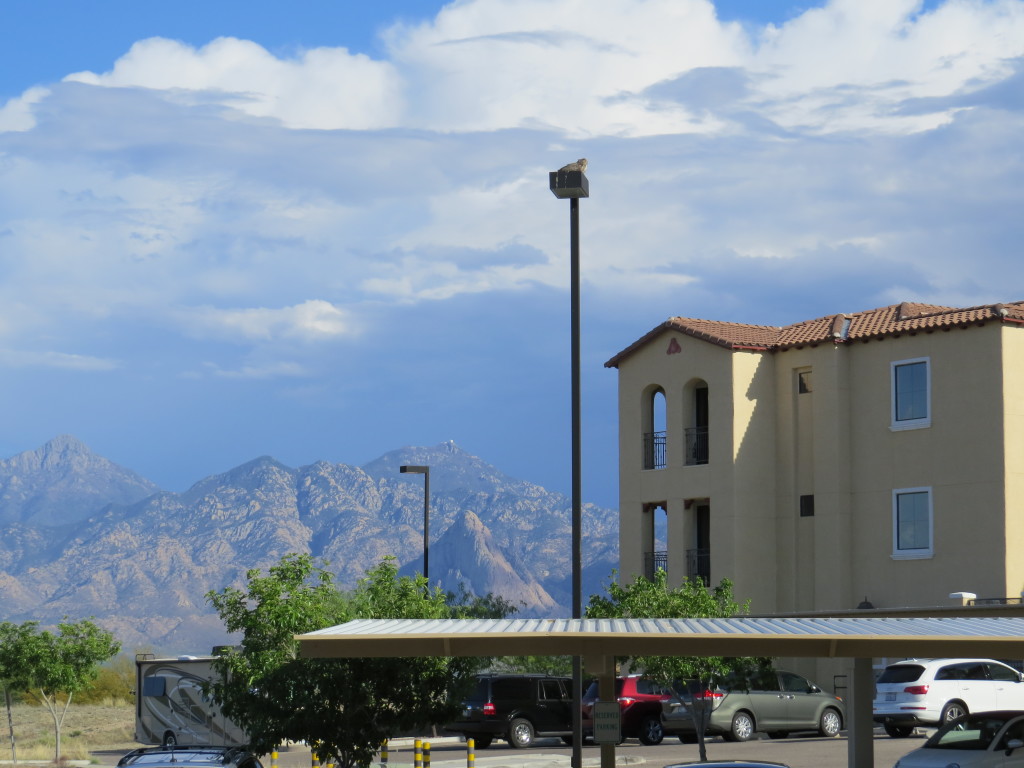 Having a resident owl at our accommodations always made going out to the parking lot enjoyable as you could play ‘Where’s Waldo?’ each time.  One time we found it in a palm tree.  Look at those talons! 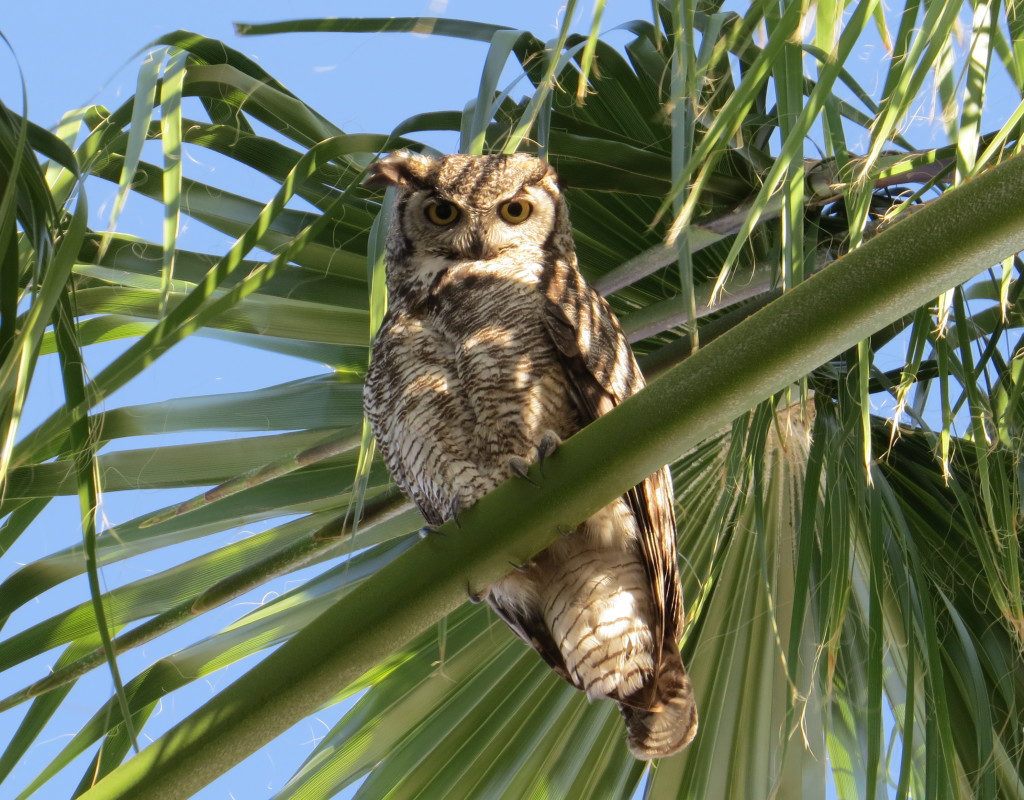 It was really windy that night. Can you tell? 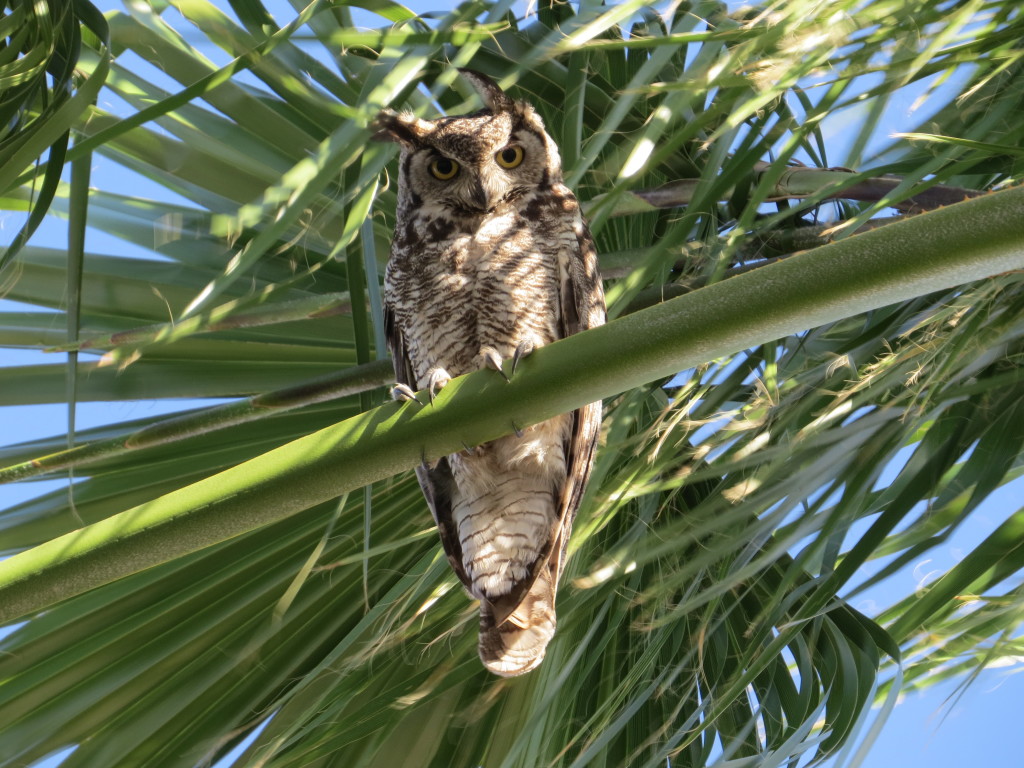 The Great Horned Owl wasn’t the only great bird at the hotel.  I managed to find a Black-throated Sparrow, Cactus Wren, and even a lifer Hooded Oriole or three for Evan! 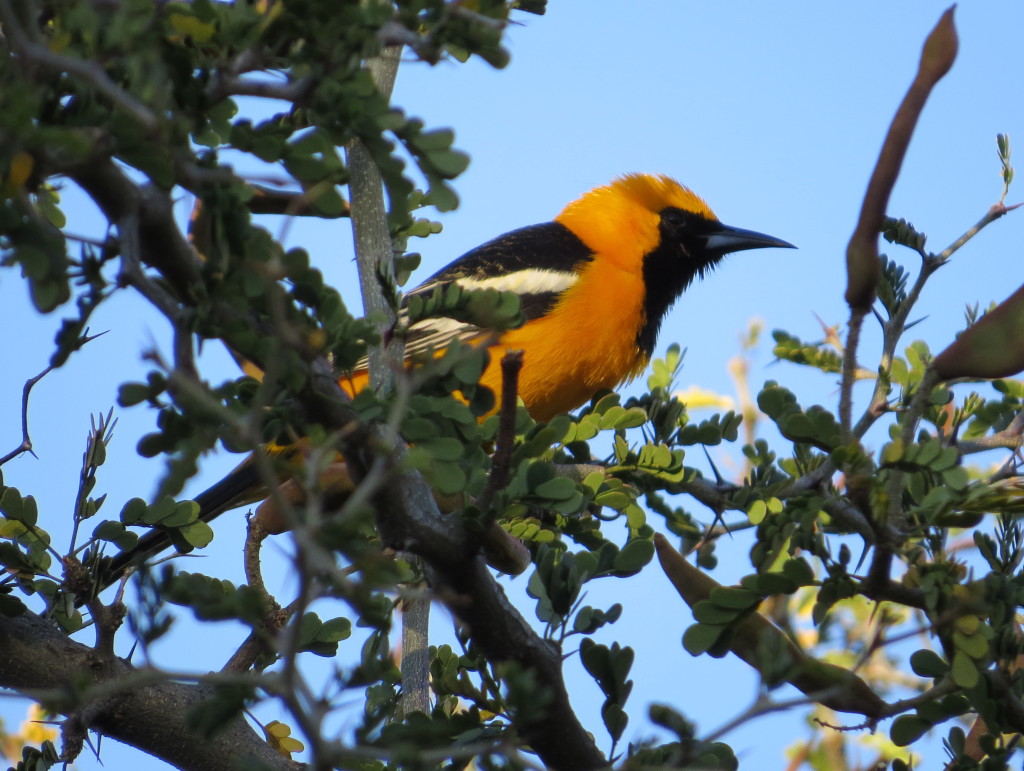 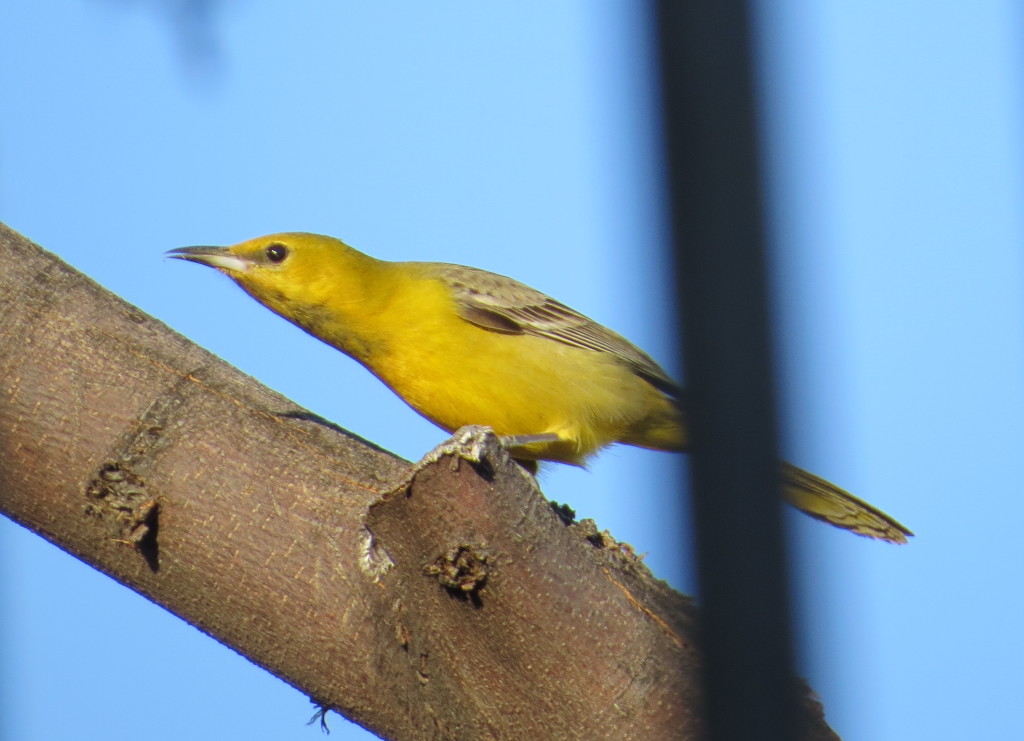 The Hooded Orioles were that much sweeter as we enjoyed them poolside while enjoying  other sweet views. 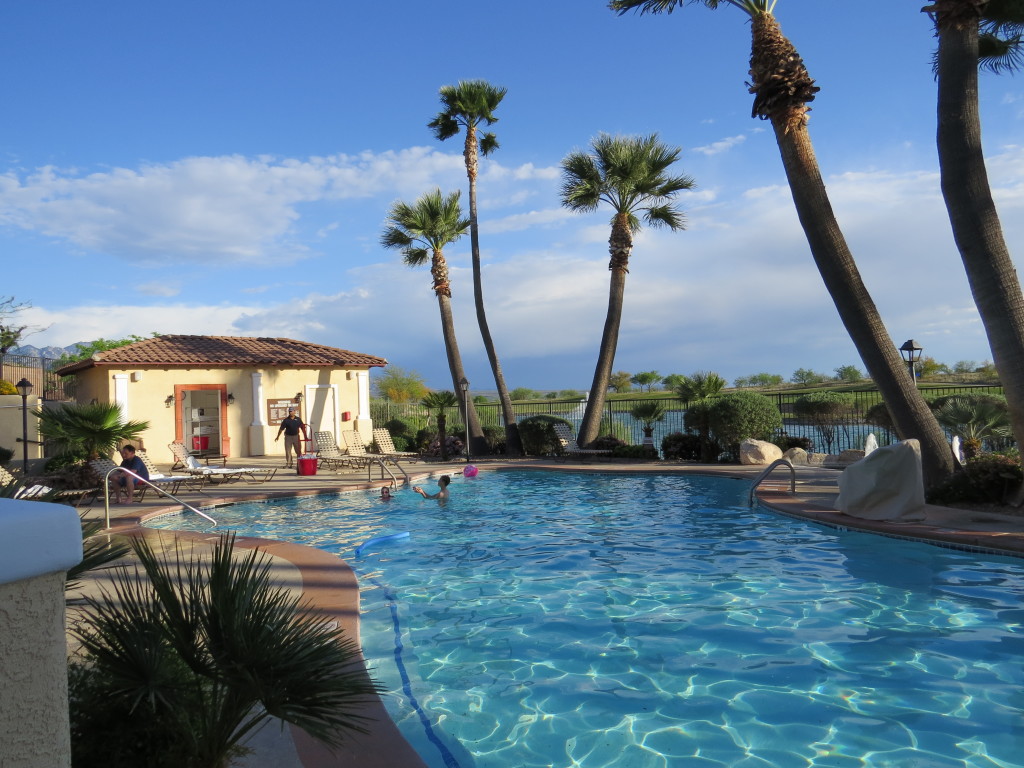 After our grand Elegant Trogon adventure on the morning of April 1st, Tommy and Gordon dropped us off at the hotel but took some time to look for Evan’s owls.  Unfortunately, Tommy and Gordon just could not get on the owl. 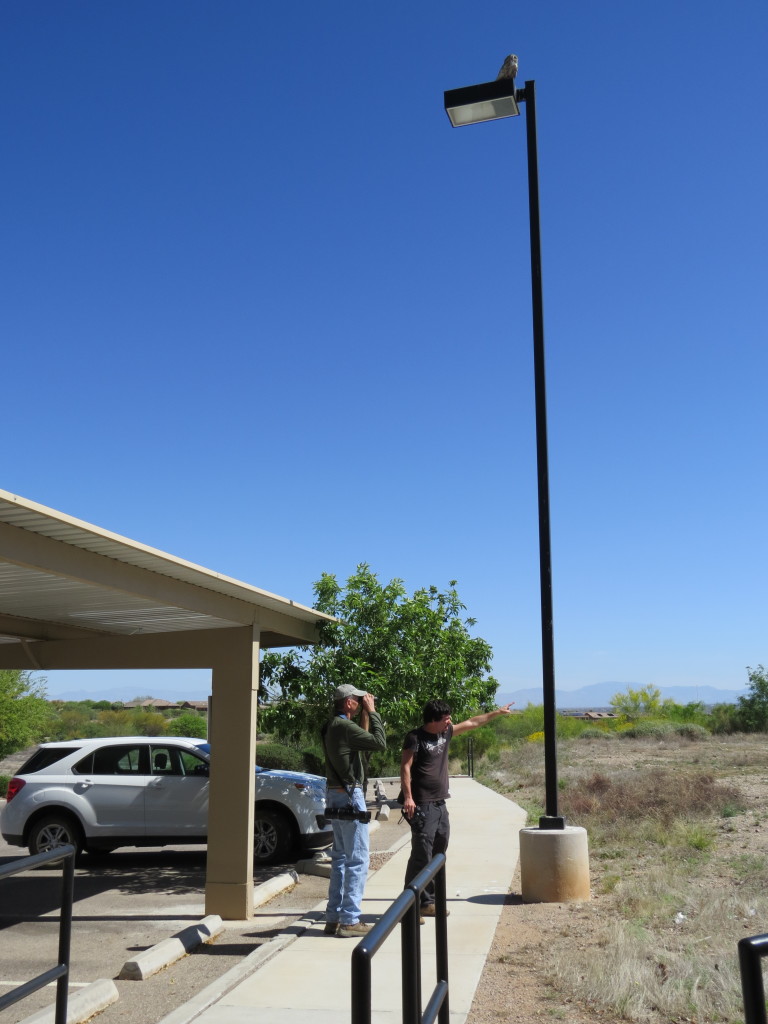 They had been so obsessed with the fact that my bird photo-list on the blog is missing a Rock Pigeon picture, that they could focus on nothing but finding me Pigeons and failed to see the owl.  I was told that in this photo, Tommy had sighted a tidy group of four Pigeons.

The truth is, Tommy and Gordon just weren’t used to owling VIP-style. We brought them to the elevator that took us up three flights.  Then the doors opened, giving them this immediate and direct view: 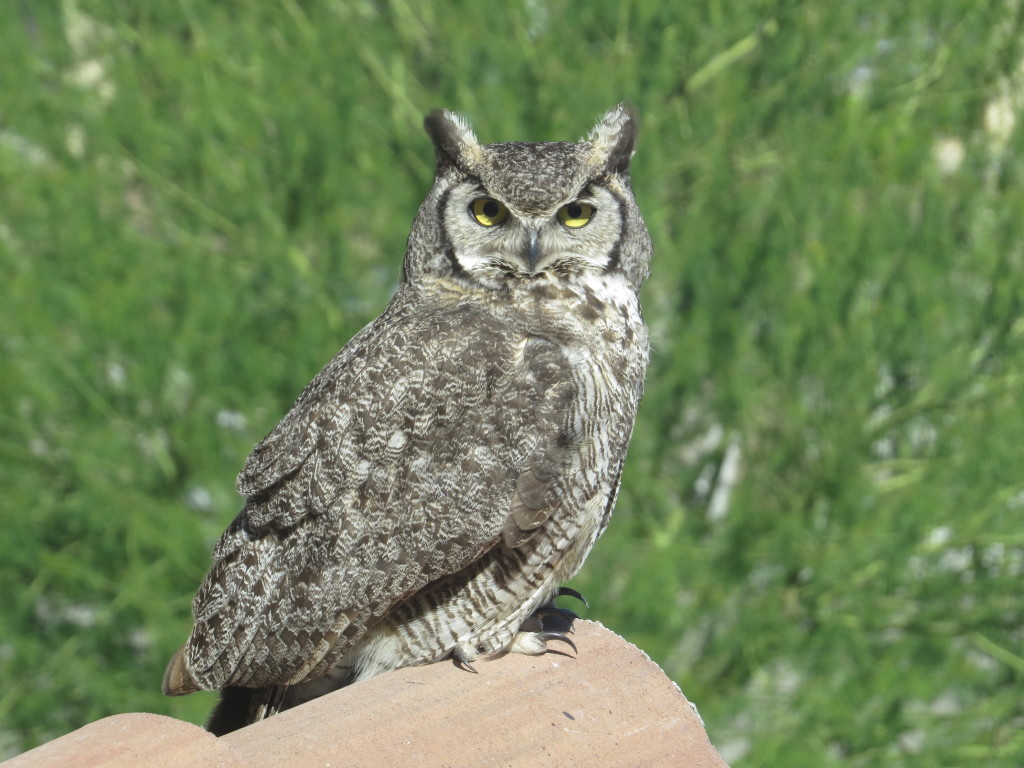 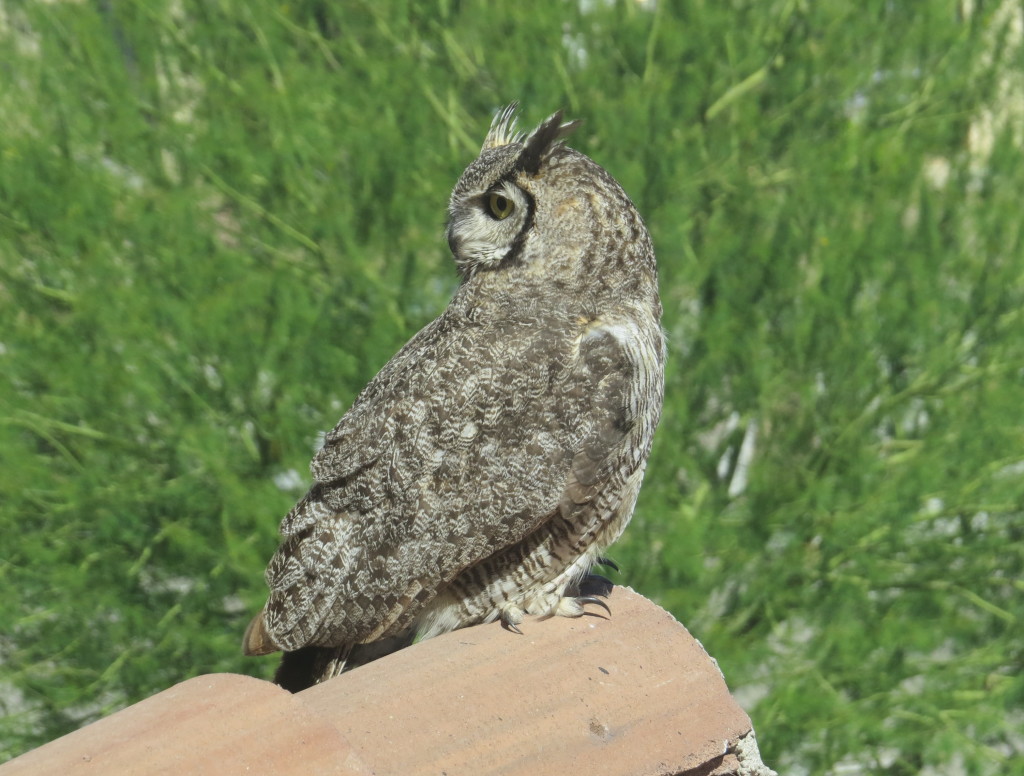 Tommy and Gordon actually contributed to the owl discovery as they found the male tucked up into a palm tree!  We now had two adults in view! 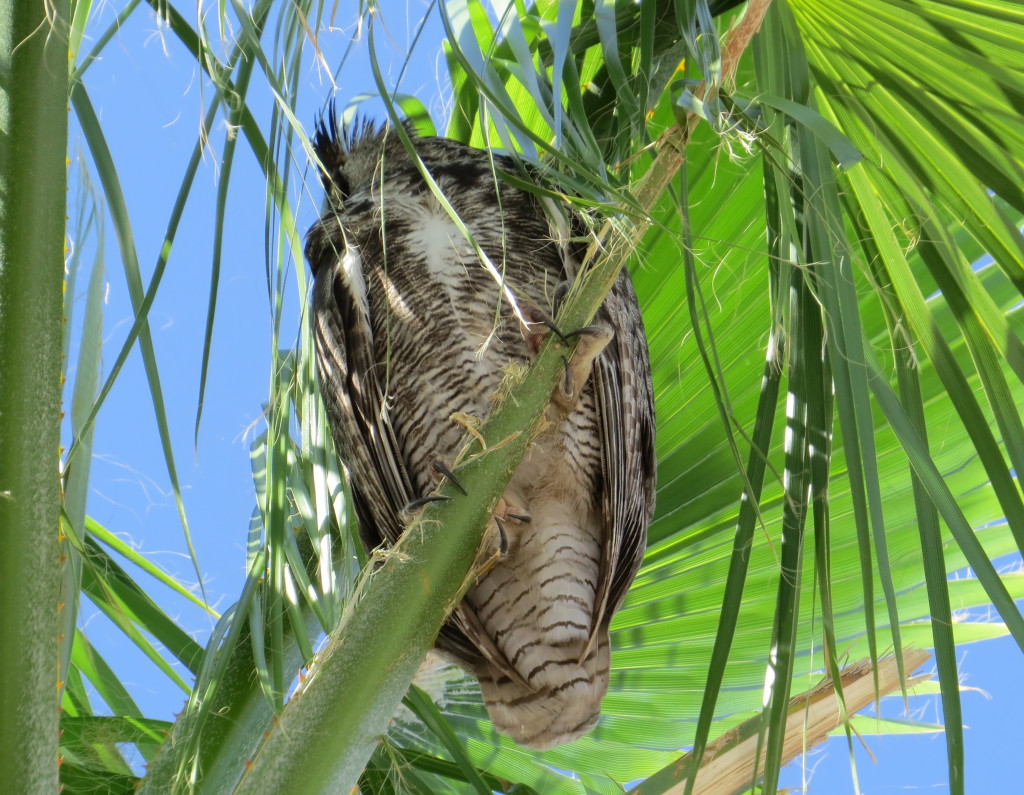 It was fun to watch these Arizona birders, who by all rights should be jaded to all common birds, enjoy this pair of nationally common GHOWs along with us.  Perhaps, after now having seen such birds as the Painted Redstart and Elegant Trogon, Evan is the one who’s jaded…

The only cure for such a hardened-heart toward the owls would be an infusion of multiple owl lifers on one of the most thrilling owl-prowls we’ve ever had.  Coming up next is some exciting NIGHT owling we had that very night back in the Phoenix area along the Salt River.  Stay tuned.