Getting back to my hotel in Green Valley that afternoon on the 31st after lifering hard at Mt. Lemmon, Florida Canyon, and Madera Canyon, I couldn’t take any more birding, mostly because my stomach bug was still raging hard. I got about an hour’s rest before Evan made a big birding discovery at the hotel that forced me into full-on birding mode again.  This discovery will be the focus of the next blog post. Once that excitement settled down, I finally collected my thoughts enough to remember that Tommy DeBardeleben and Gordon Karre were counting on me to check the internet for Trogon reports to decide what we should do in the morning.  According to eBird, no Trogons had been seen for over a week at Patagonia Lake State Park.  On the other hand, just the day before, Eric Ripma had eBirded two male Elegant Trogons 1/4 mile up the Super Trail at Madera Canyon.  The choice was now clear, especially since Madera was a short 15 minute drive away where Patagonia was closer to an hour.  I texted Gordon and we all mutually agreed that Madera it was.

After telling Evan about the cool birds I saw and after he had some good sightings at the hotel, he was in a birding mood and wanted to go on the Trogon hunt the next morning.  I felt our chances were decent after that eBird report, so I was glad he made that decision.  Adding to the excitement was that my health was back to 100% on April Fools morning.  It was feeling like a GREAT day to lifer on my grail bird. 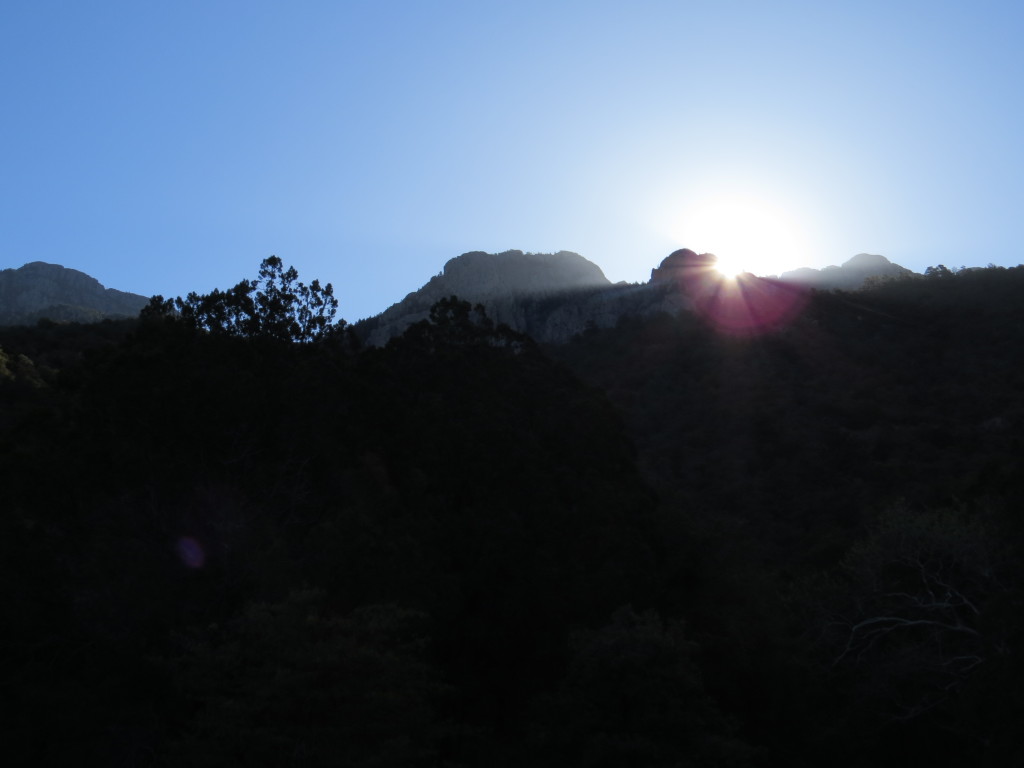 Tommy and Gordon picked us up at the hotel at 6:00 to bring us back to the mountain.  As we drove to the Super Trail parking lot, Evan lifered on Mexican Jay out the car window near the Santa Rita Lodge.  We weren’t stopping for those secondary lifers, though.  We were on a mission, and our crew-leader Tommy was shouldering all the weight and anxiety of the Trogon hunt.  Like Kirby Puckett in Game 6 of the 1991 World Series, Tommy was putting the team on his back and was determined to bring us all to glory.  Before we got to hiking that morning, Tommy spoke to me in a hushed tone, “Now, I don’t want you to get your hopes up, but Gordon and I scouted the Super Trail last night and we…heard a Trogon.”

“Yeah, I won’t get my hopes up,” I lied between pounding heartbeats.

Almost immediately after we got on the Super Trail, Evan had his Painted Redstart lifer.  I was happy for him because I knew he also really wanted to see this bird too even though he didn’t go with me to Mt. Lemmon the day before. Gordon pointed out a Bushtit at one point which didn’t get me too excited since I had seen them and crushed them in Colorado.  Evan chimed in, though, and reminded me that that was a life bird for him! Oops.

Not long after that I spotted a crazy-looking creature barreling down the path toward us.  It turned out to be a single-striped morph of the Hooded Skunk. 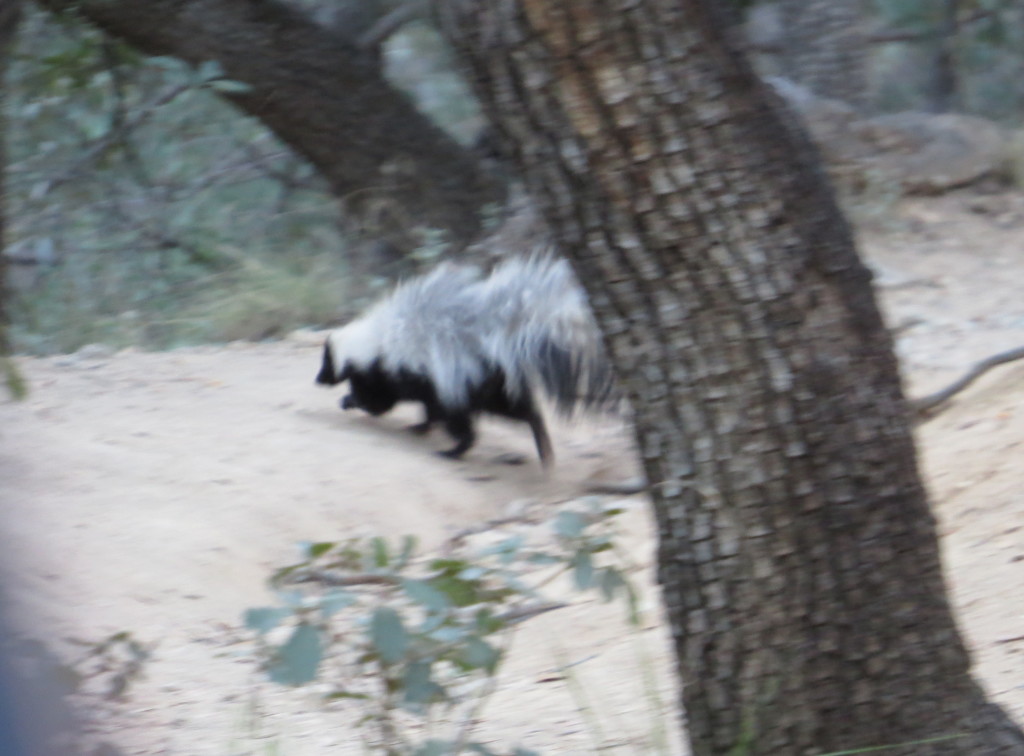 I’ve learned that birders, myself included, are an easily distracted lot, especially when it comes to cool animals.  The TROGONS-ONLY! mode was now set-aside for a wild-skunk chase, a venture that could have gone south in so many regards. 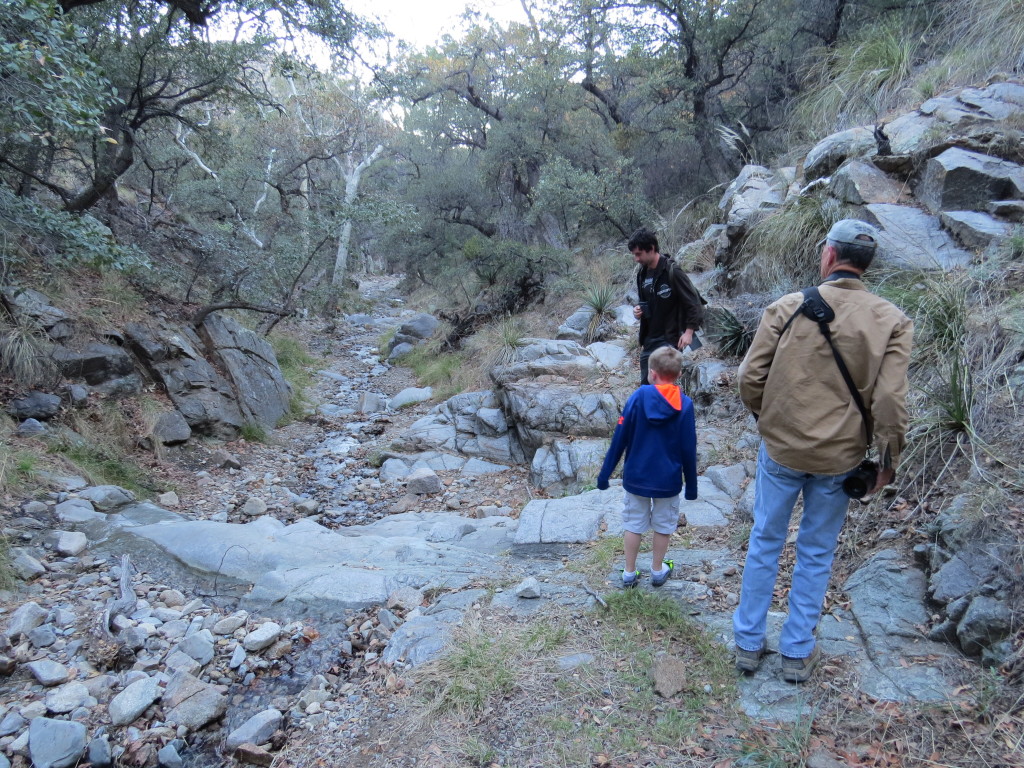 Thankfully it didn’t, though, and we were back on the Super Trail hunting for Trogons again.  A little bit later as we were walking along looking at every mid-level perch along the canyon wash for our target, an exotic bird sound boomed and brought us to an abrupt halt.

“That’s it!” Tommy exclaimed.  Tommy thought he heard it further up the wash, but as we all paused to listen, the sound was coming from behind us in an area we had already walked past!  Tommy had been leading our single-file procession up the wash and was actually the furthest from the bird.  Tommy immediately sprung into action and quickly walked by all of us to now take the lead in the opposite direction we had been traveling.  It was an extremely serious and tense moment–we were on the cusp of glory, and we could all taste it. The whole time we were hearing the cool sound of the calling Elegant Trogon and multiple heart beats were collectively being skipped.  In seconds Tommy had pinned the location of the calling Trogon from across the wash.  Then, magic happened– he saw it take flight, in all its splendor, and land on our side of the wash!  This was the moment when Tommy pointed it out to all of us and became a greater hero than Kirby Puckett. We got to see it in the early morning light briefly before it flew into an open area allowing incredible but brief looks.  It was staggering. We were really looking at an Elegant Trogon. I managed to get a couple photos before it flew further up the mountain slope.  Considering the early morning light and the bird’s unwillingness to sit still, I was beyond thrilled to get this shot which is the best souvenir I could hope for from the 2015 AZ trip. 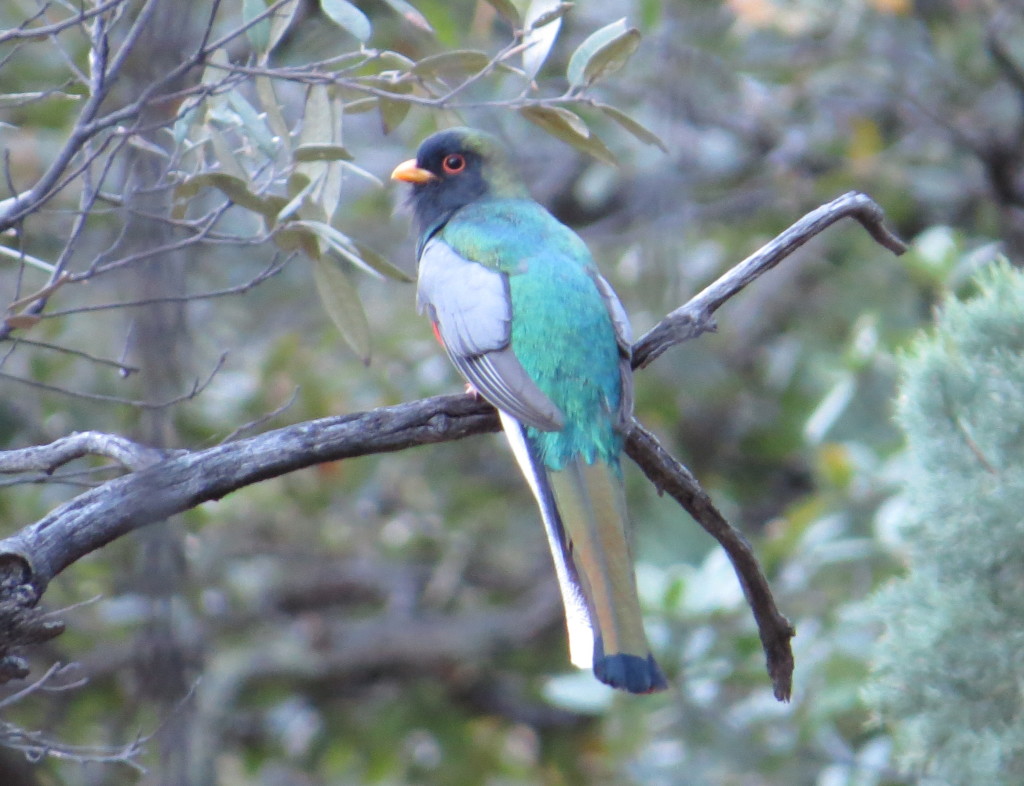 I never could get that classic shot of the bright orange belly and white neck band, though I saw those features whenever the bird would fly.  That forward look was the photo I really wanted, but the more I think about it, the more I like the photo above because it shows off the bird’s emerald sheen on its back as well as its coppery tail.  You don’t see that too often in photos.  And considering some birders dip completely on the Trogon or get crummy views at best, I count myself extremely lucky for the sighting alone.  This photo was the icing on the cake.

That said, I didn’t stop trying for the classic shot.  I never got it, but it’s a right of passage that I should post at least one blurry, bigfoot-esque photo of this massive prize.  At least you can get a sense of the bird’s orange belly. 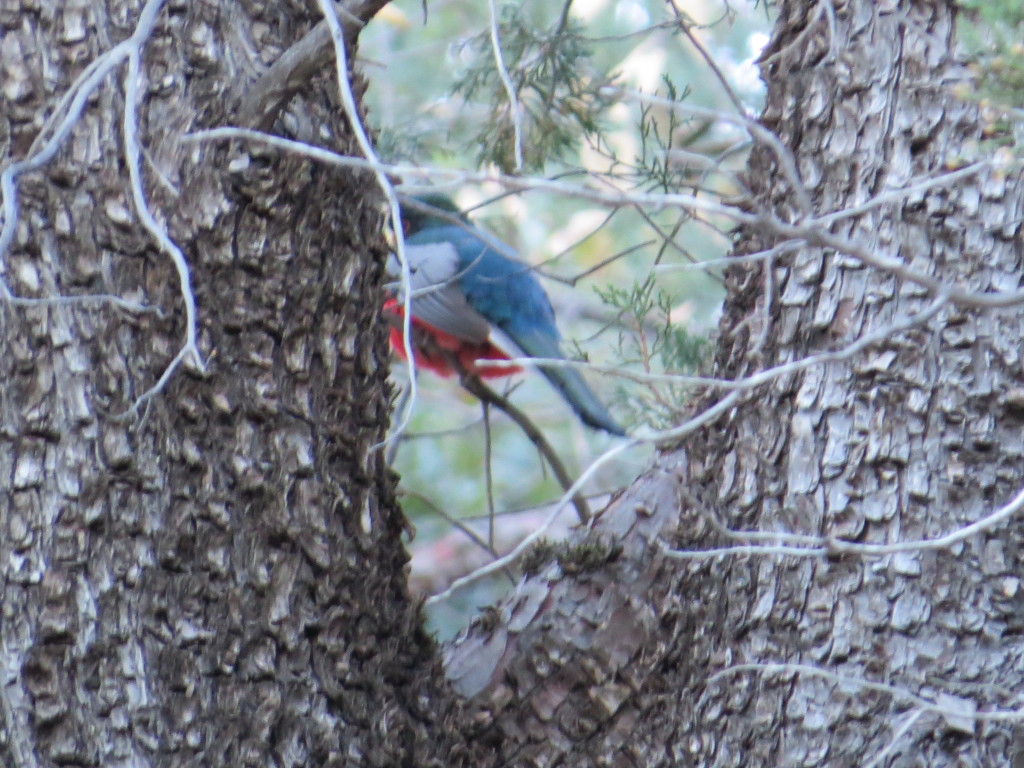 Tommy and Gordon were excited with the find too, namely because they had gotten us this key lifer, but also because it is a fantastic year bird for them.  The only comparison I have is a Great Gray Owl to a Minnesota birder–it’s a bird we can never count on, is elusive and easily missed, and is always a thrill to see.  So as the bird kept calling and moving up the slope, Tommy asked me, “You want to go after it, Josh?”  Um, yeah!

Tommy, Evan, and I started racing up the slope for better looks at this bird.  It continued to call and move often, which Tommy believes is a sign that it was looking for a mate.  Evan was having trouble on the steep incline with his sandals, so he waited on the trail with Gordon while Tommy and I went uphill.  Eventually the bird had gone completely out of sight and earshot, and we gave up and headed back down the hill.  Once Evan and I were in sight of each other again, he called up the mountain with a huge grin on his face, “Hey dad, I just got my Arizona Woodpecker!”

This was the smug look that met me at the bottom of the hill.  Do you see the smug all over that face? 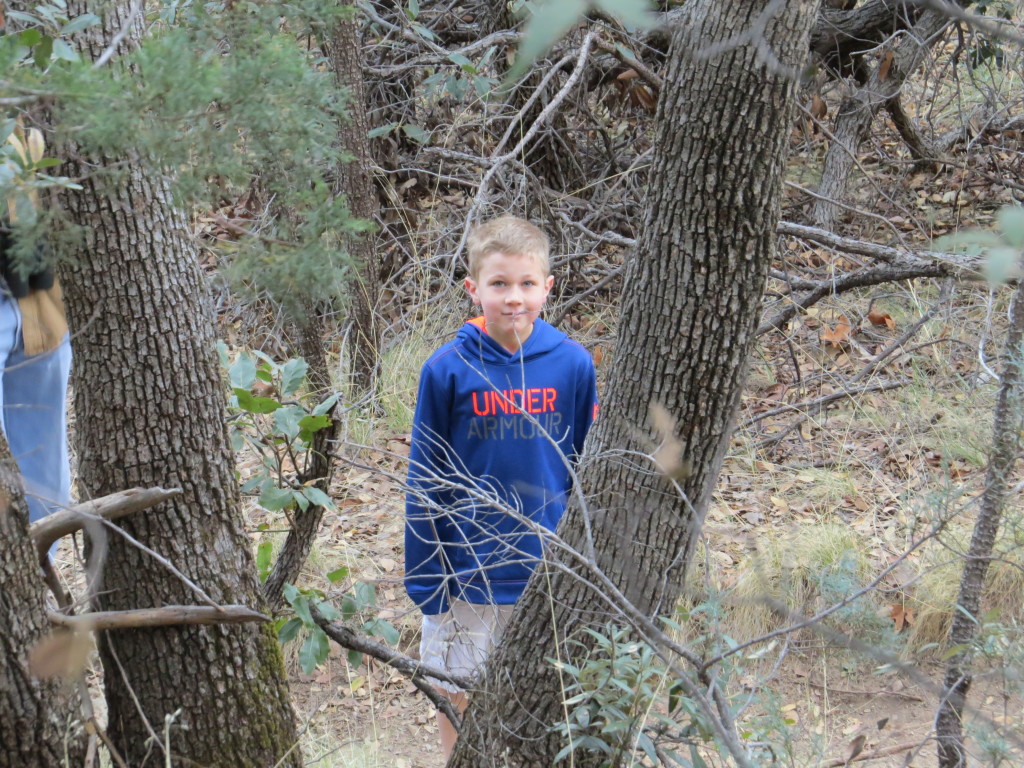 He and Gordon had gone behind my back, literally and figuratively, for this life bird which I was now desperate to see even though I had just come off a literal mountain-high from seeing the coolest bird of my life.  But it didn’t take long for Gordon to find the AZ specialty  for me too.  I got crummy looks, but a lifer is a lifer after all. 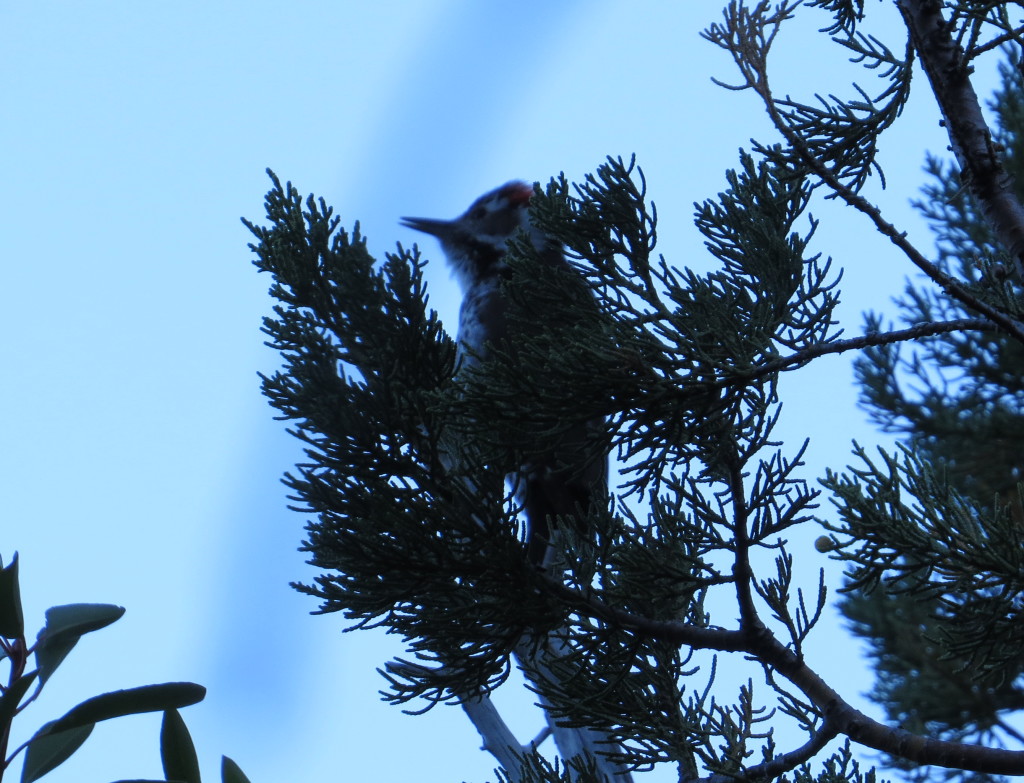 After double-lifering, our party of four continued up the wash in hopes of refinding the Trogon or finding a new one altogether. 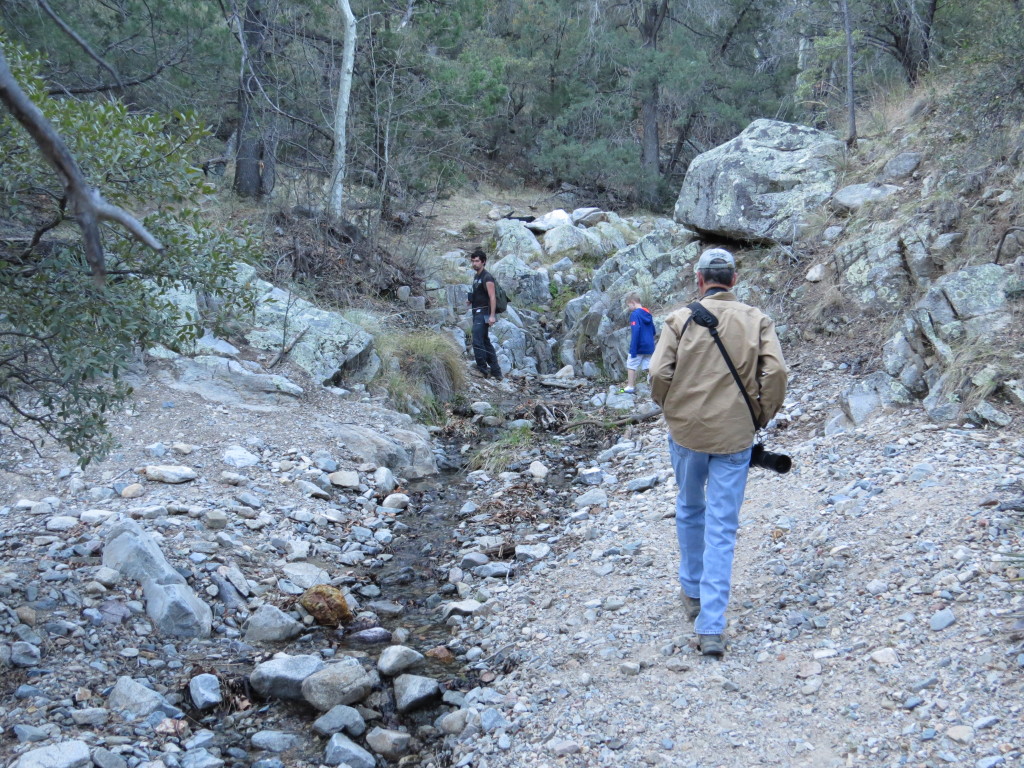 Sadly, we never did see or hear the Trogon again even though we walked the wash as far as we could.  The walk back was pleasant with lots of bounce in all our steps as we had secured the main treasure.  As we walked along, I could visibly tell that a weight had been lifted from Tommy’s shoulders.  He was relaxed; he had done his job that he took more seriously than anyone else.  The rest of us were all just on Cloud 9, now enjoying being in bonus-birding mode.  To kick things off, we had another lovely Painted Redstart, and Tommy found Evan his Townsend’s Solitaire lifer. 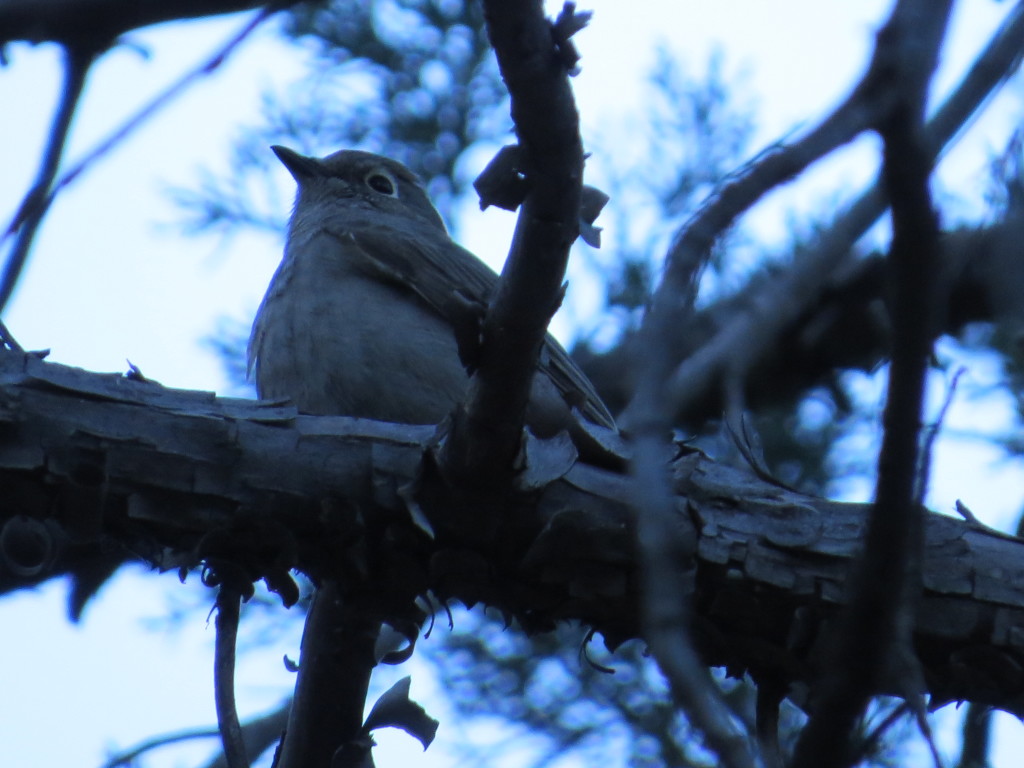 Finally the sun crested the mountain peaks, washing the valleys below with beautiful light.  Evan announced he had found a great photo-op of an abiding Mexican Jay while Gordon and Tommy simultaneously found him his Hutton’s Vireo lifer.  I opted for photographing the Jay while Evan got his Vireo.  Great photo-scouting, Evan. 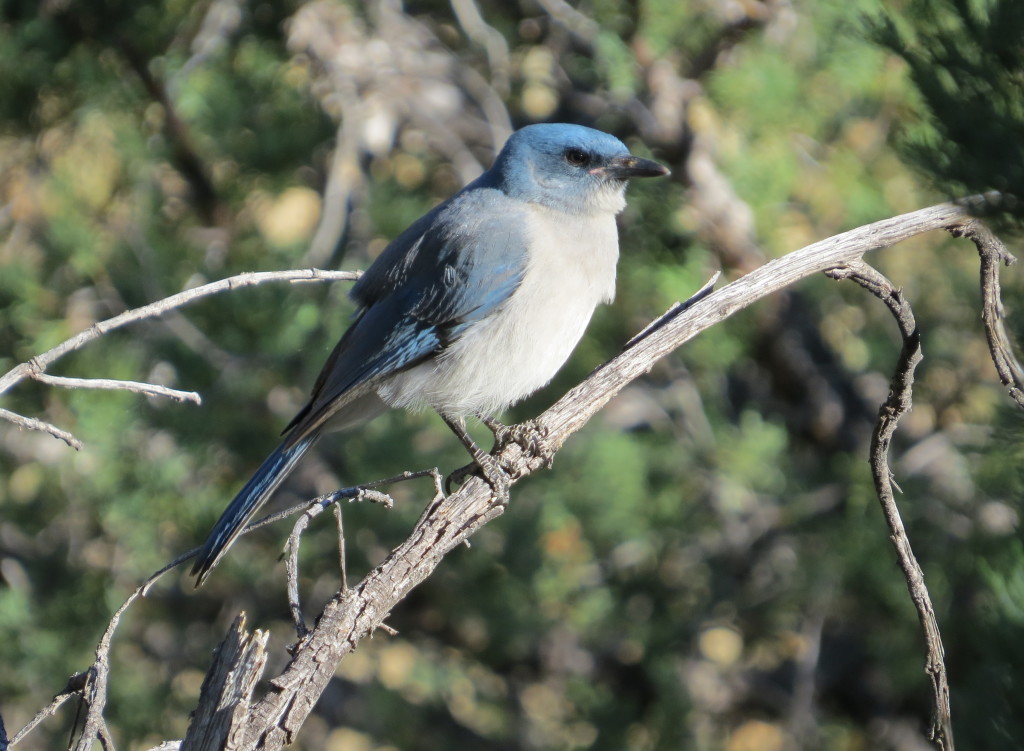 And nearing the parking lot, we were also able to get Evan his Bridled Titmouse lifer.  I was finally able to get a photo of them. 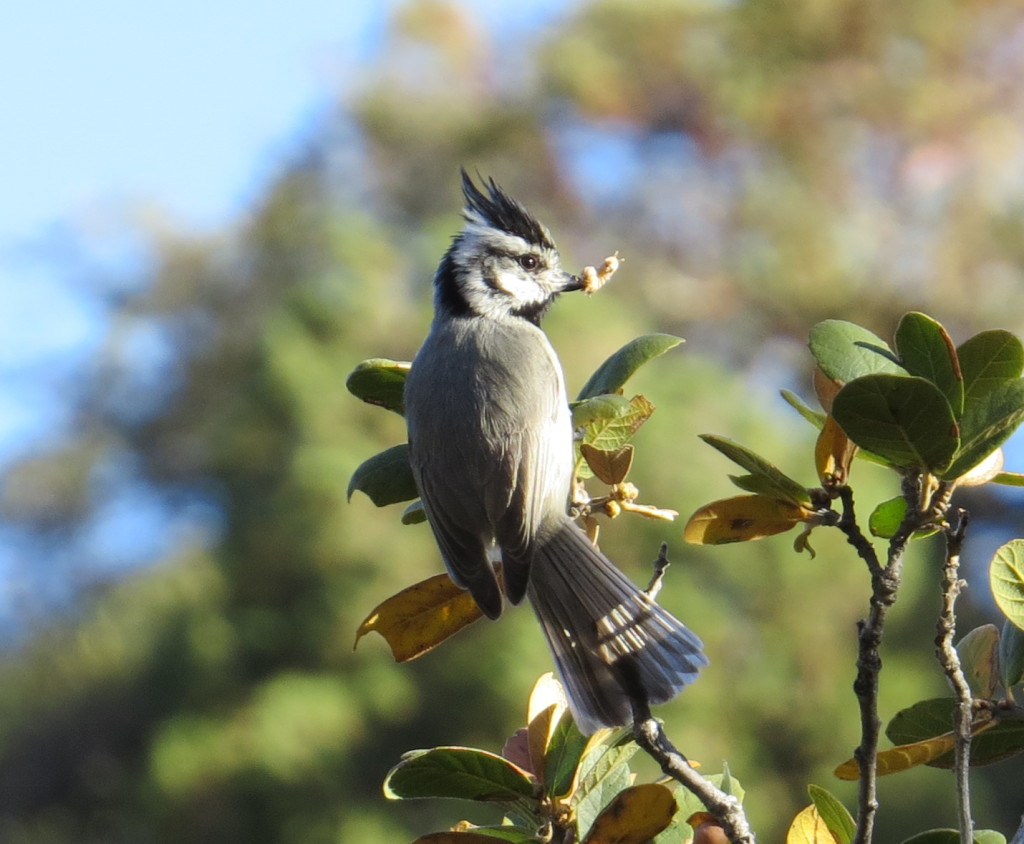 Getting back to the car, we decided to make a stop at the spot in Madera Canyon where Gordon and Tommy crushed Whiskered Screech-Owls the night before.  I got to sleep in a hotel room the previous night instead of a tent. They got WHSOs.  I guess that’s a fair trade, or not. Definitely not. I’d sleep on a rock for those shots: Tommy’s photos and Gordon’s photos. Sadly, our brief owl search turned up nothing, other than a nice photo op of a lone Band-tailed Pigeon that Gordon found. 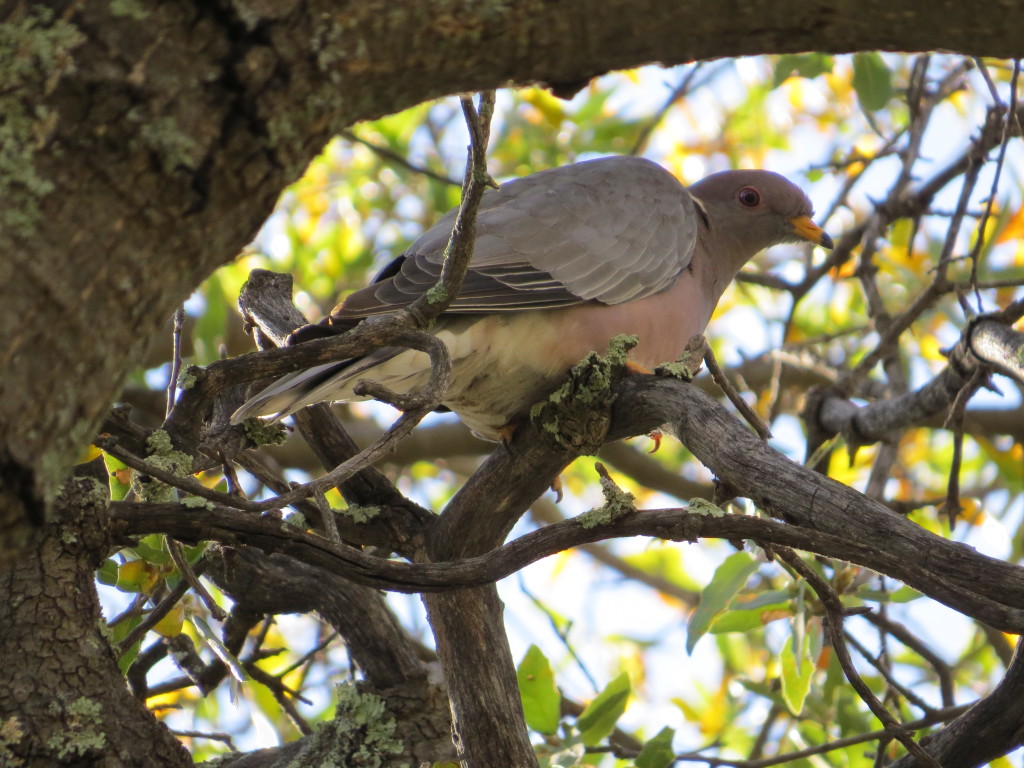 Evan and I then hung out at the Santa Rita Lodge feeders to get Evan caught up on some lifers while Tommy and Gordon went to work packing up their campsite.  Evan quickly lifered on Broad-billed Hummingbird, Acorn Woodpecker, and Red-naped Sapsucker. 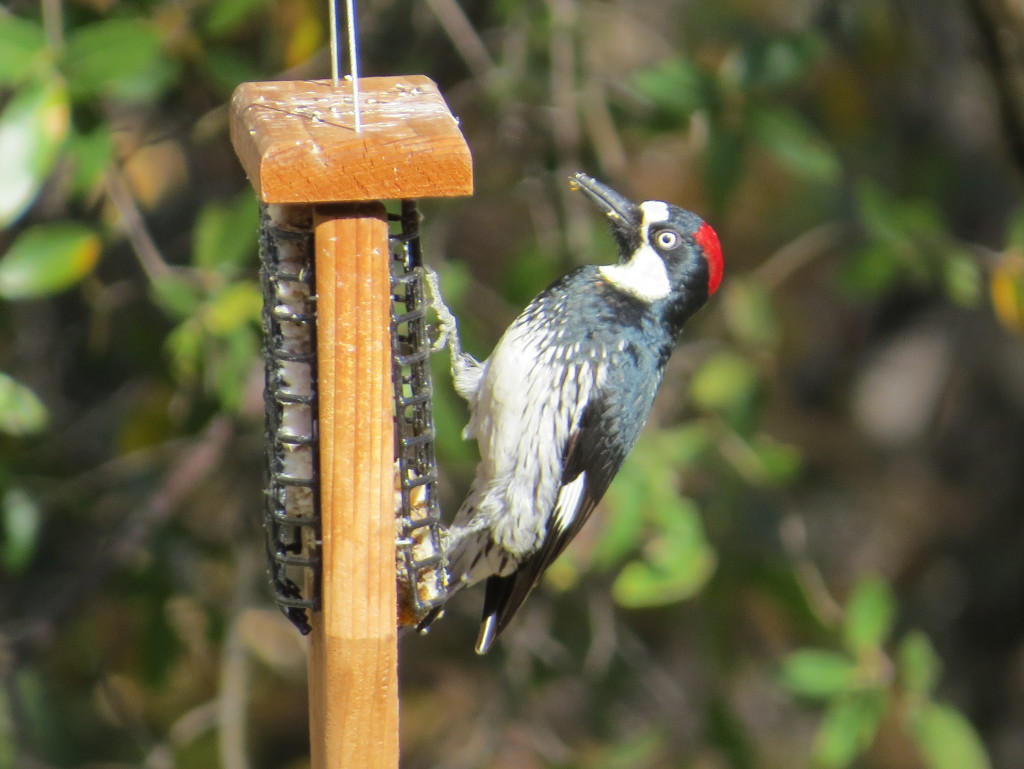 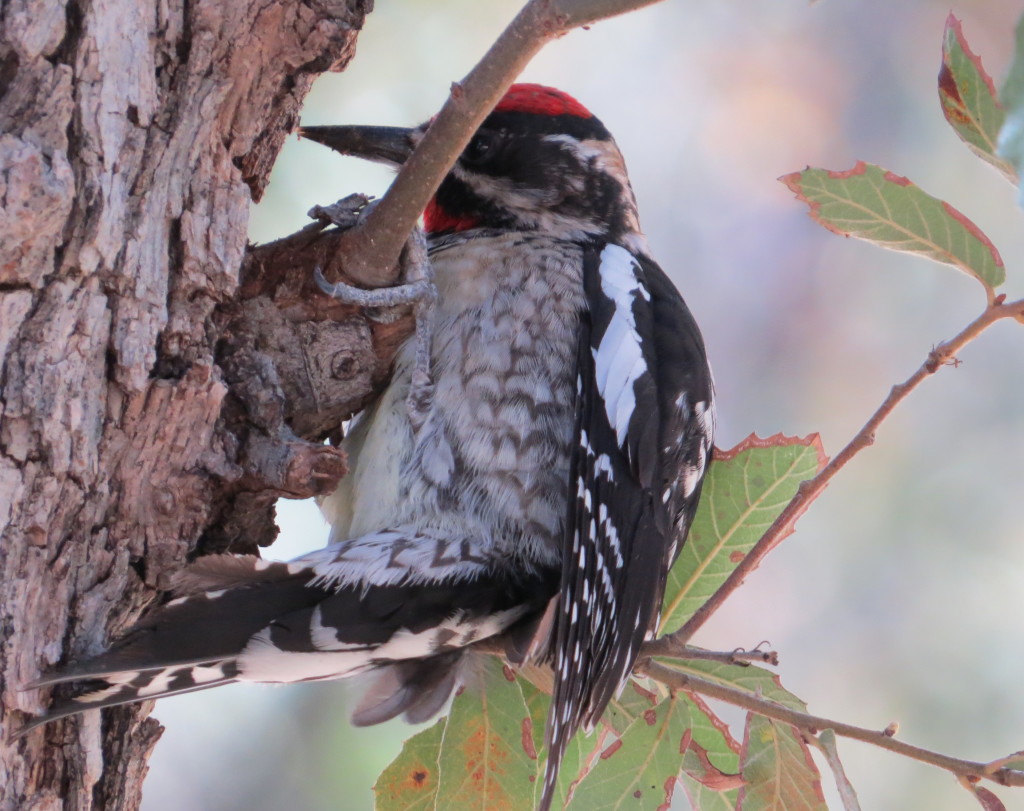 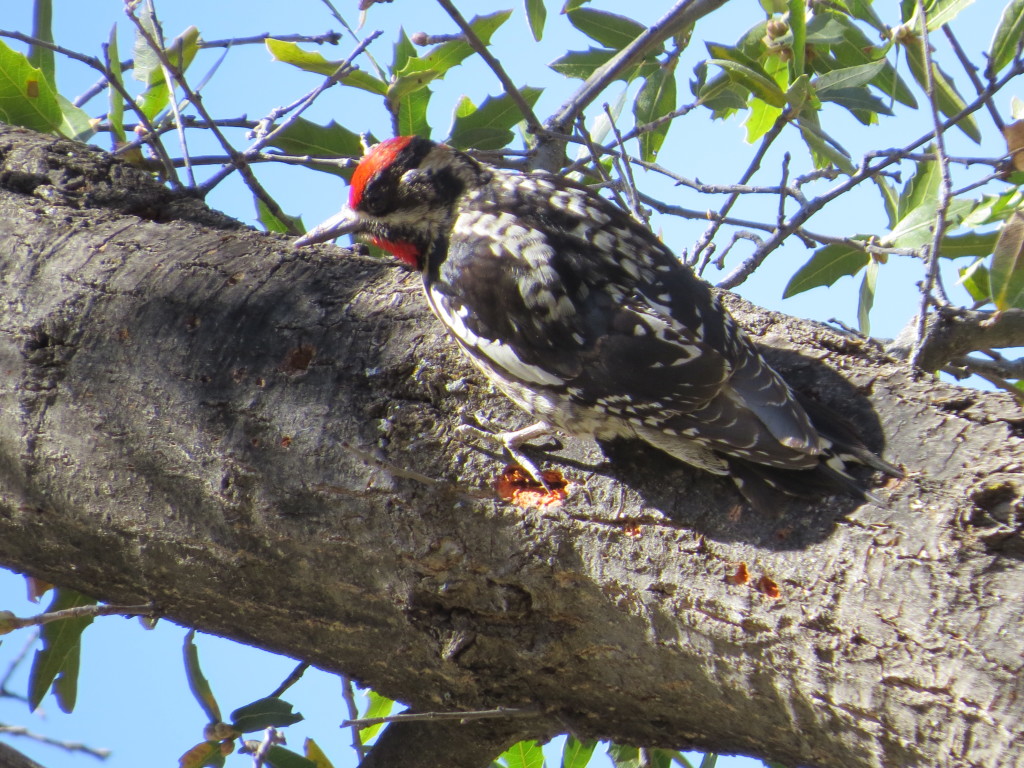 We also had an Arizona Woodpecker fly over our heads, and Evan finally got good looks at numerous Lesser Goldfinches.  His lifering on LEGO was the same brief sighting as mine in Colorado. 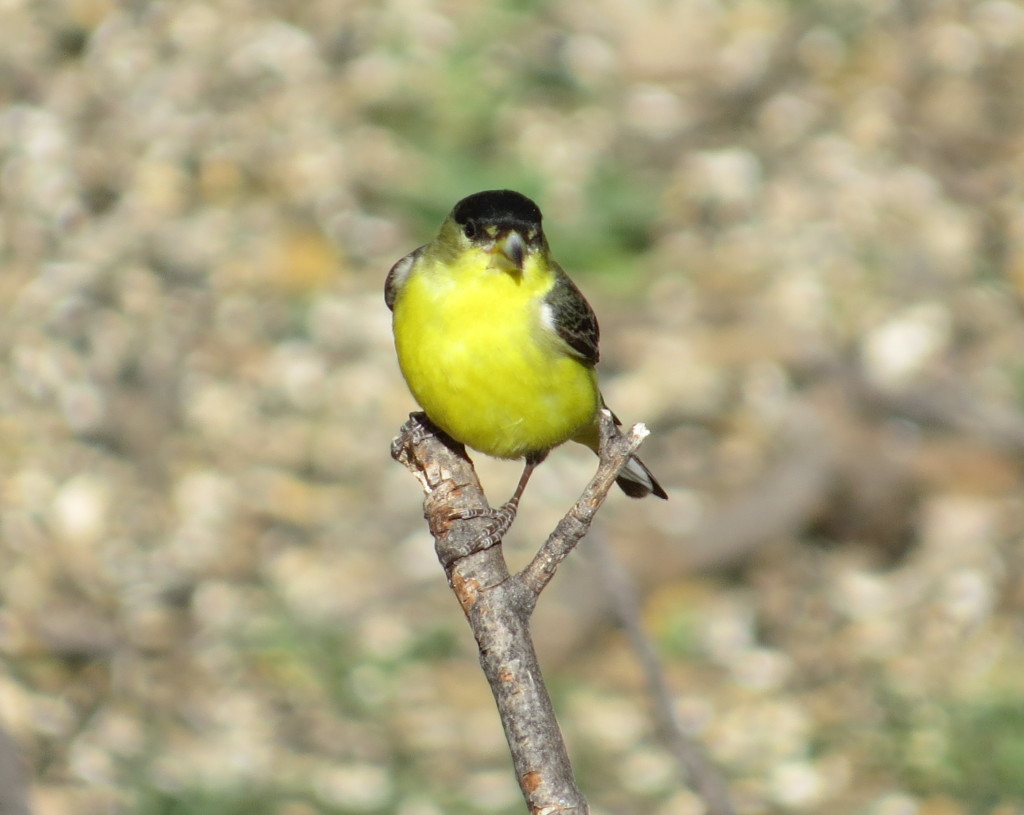 After enjoying these birds for a little while, Evan and I went into the gift shop at Santa Rita Lodge where we were greatly wooed by anything and everything Elegant.  There’s nothing as effective as victory for loosening the purse strings: Trogon hat for me, Trogon pin for Evan, Trogon postcard for Randy back home who’s always dipped on ELTR…  Thankfully, Tommy and Gordon came back before we were completely bedecked in Trogon bling/apparel.

It was a monumental morning that will go down in the Wallestad birding history books as one of the greatest birding adventures of all time. We got the big guy.  All the dreaming and planning culminated in success. Moreover, Evan added nine additional lifers, including the dazzling and much coveted Painted Redstart. A huge thanks goes out to Tommy and Gordon for making it all happen. The only fitting way to end this post is a group photo of the conquerors.  These men will never be the same; they belong to an elite club.  They stand a little taller.  They walk with confidence. These men have seen the Elegant Trogon. 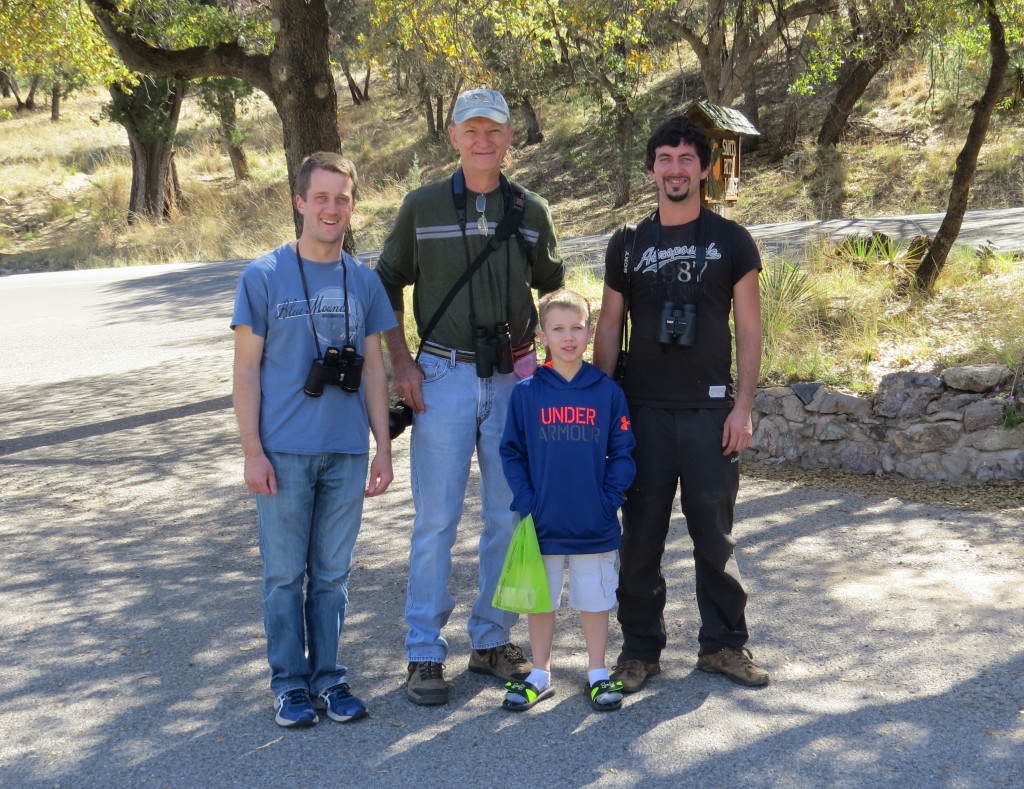