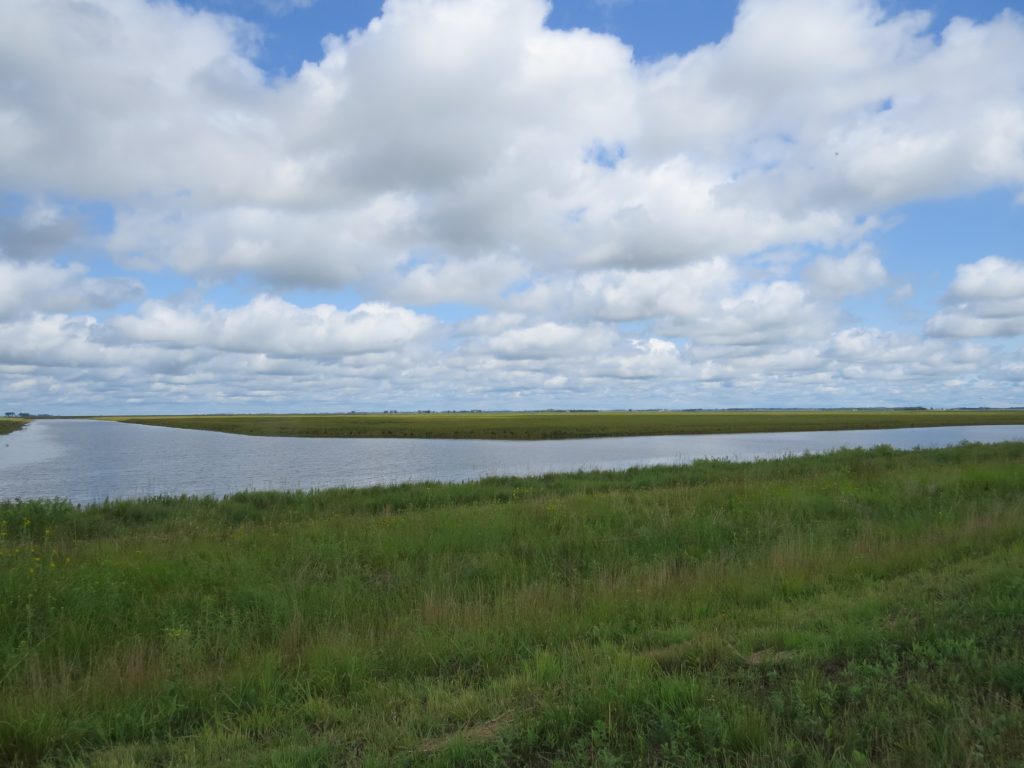 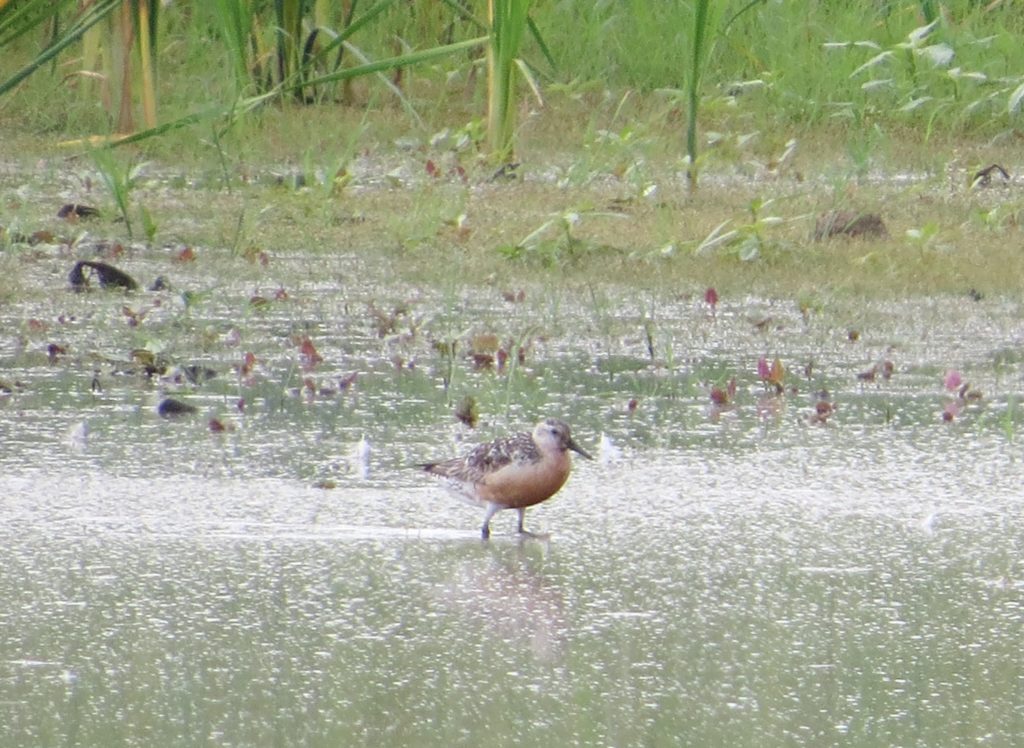 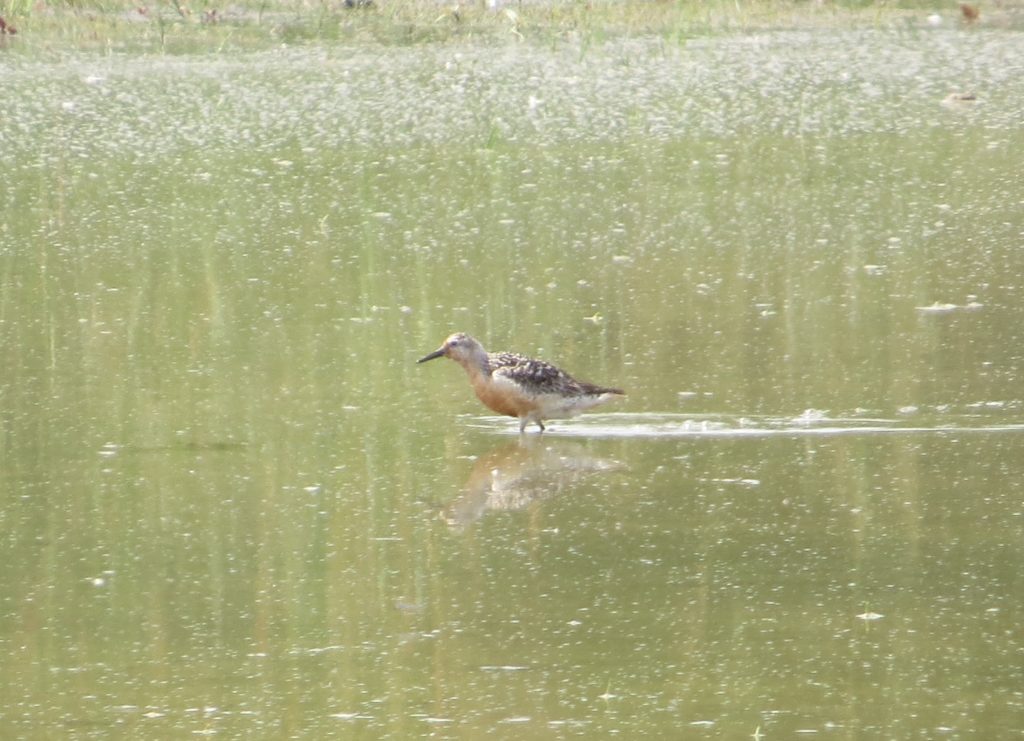 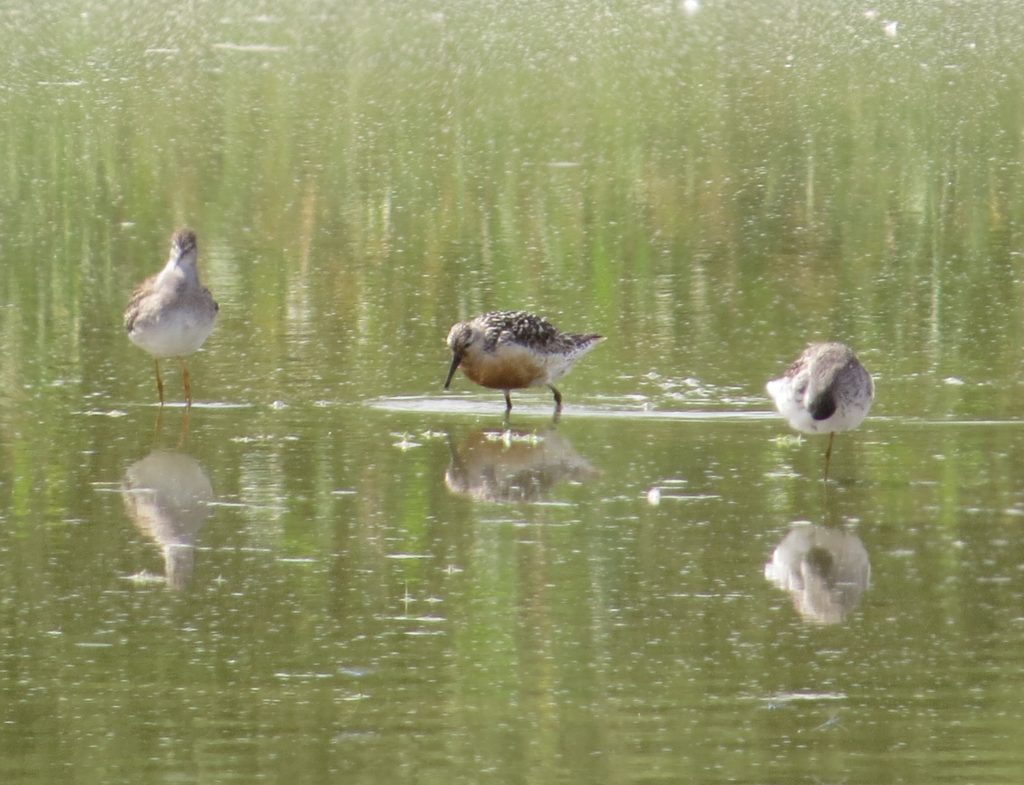 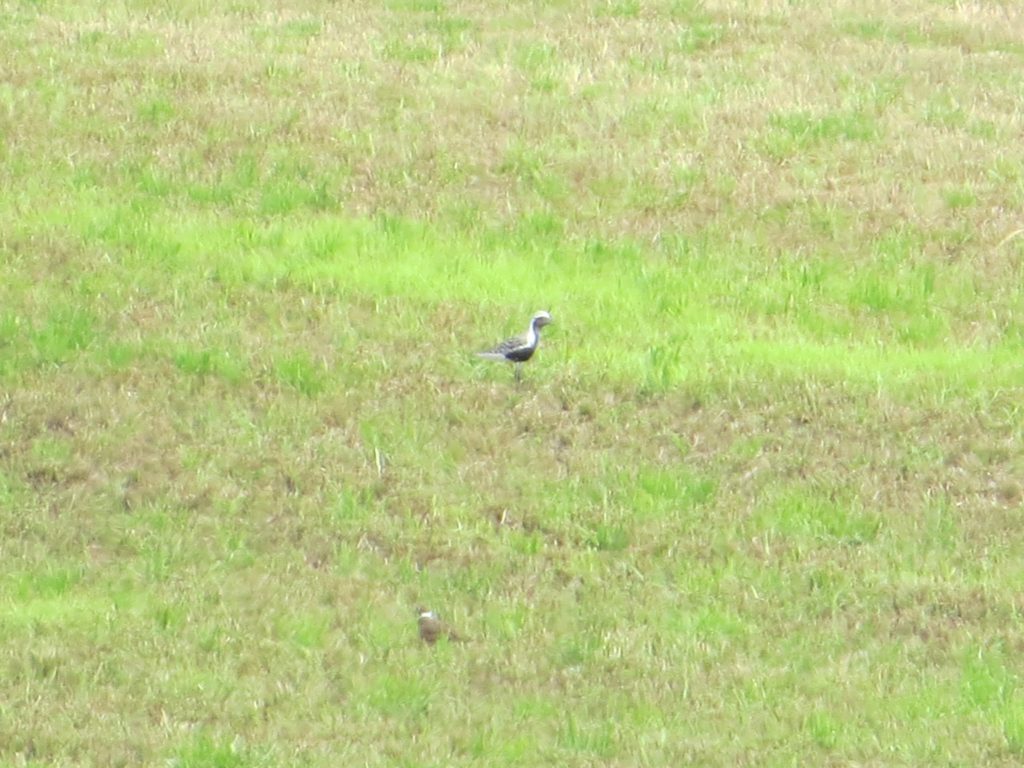 Every cloud has a silver lining as they say, so when Marin’s daycare was closed last week due to an outbreak of Hand, Foot, and Mouth Disease, I had a couple days at home that allowed me to check Carlson’s Dairy for shorebirds.  Specifically my targets lately have been the Black-bellied Plover and American Golden-Plover as we are currently in their southern migration window.  A couple weeks ago Steve found two Black-bellied Plovers at Carlson’s still in breeding plumage, but circumstances did not allow me to get out there.  Then a second-hand report of two American Golden-Plovers from just a week ago was giving me the itch to try for these two plover species before another fall migration passed.

Last Thursday our summer weather abruptly ended.  The weekend prior we were camping in unseasonably hot weather (84°) with unseasonably tenacious mosquitoes. It was awful.  On this day, however, the bipolar month of September showed its true ugly side – strong winds approaching 30 mph and temps in the low 40s.  I figured the sudden change in weather might knock some interesting migrants out of the sky. After I dropped Evan off at school, Marin and I went to Carlson’s to see what kind of fallout might be waiting.

At first glance it was slim pickings – nothing but some flocks of Green-winged Teal, Canada Geese, and a handful of shorebirds.  One of the shorebirds was a little bulkier, though.  I nabbed some pictures and knew that I had one of my two target birds.  Unfortunately I hadn’t studied up on juvenile plumages and couldn’t identify it on the spot.  Getting home I determined that I had my lifer Black-bellied Plover.   A breeding plumaged adult would have been preferred, but this bird was still handsome in its own right and a nice addition to the life list.  It also had the added bonus of being #200 on my Kandiyohi County eBird list. 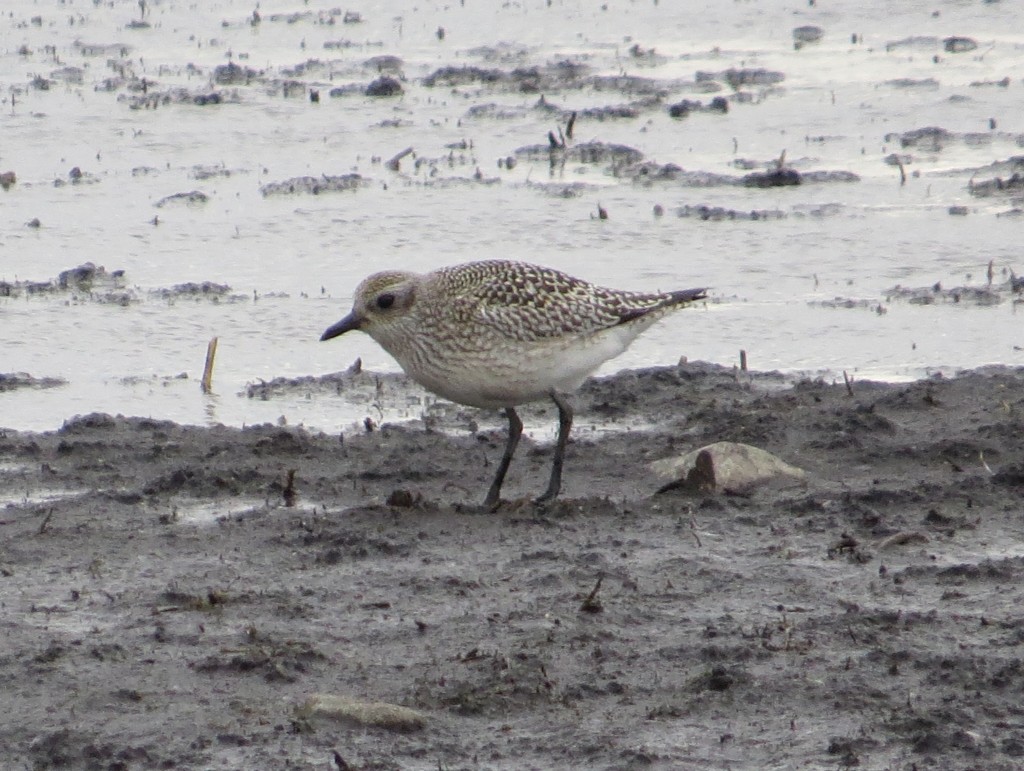 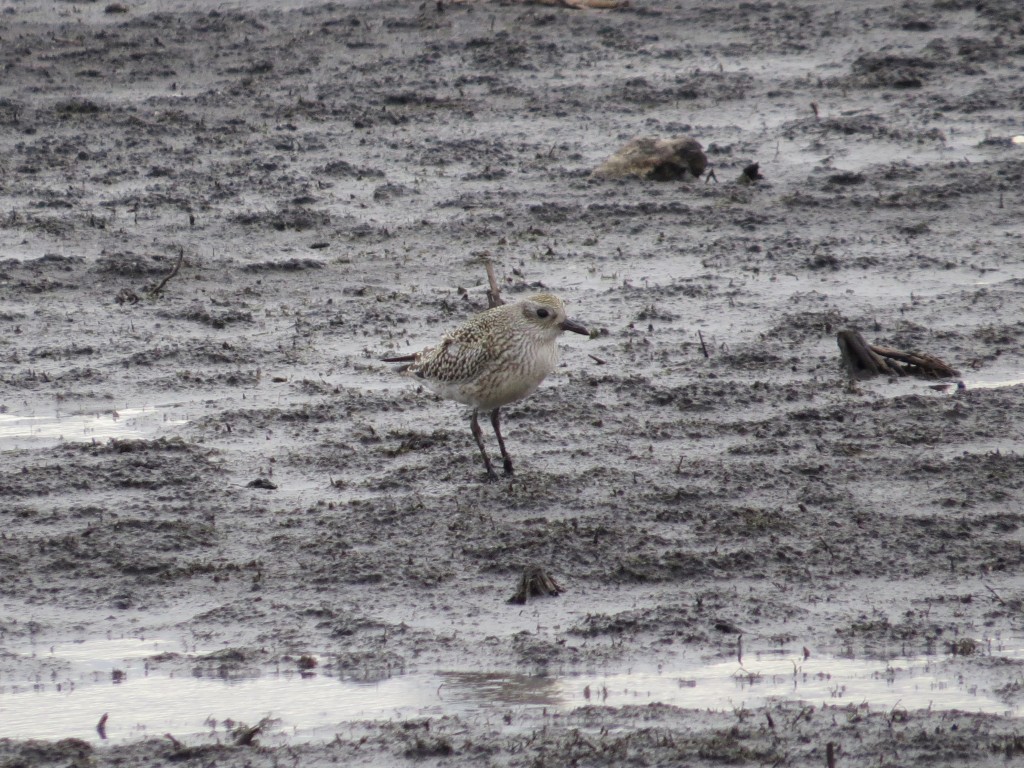 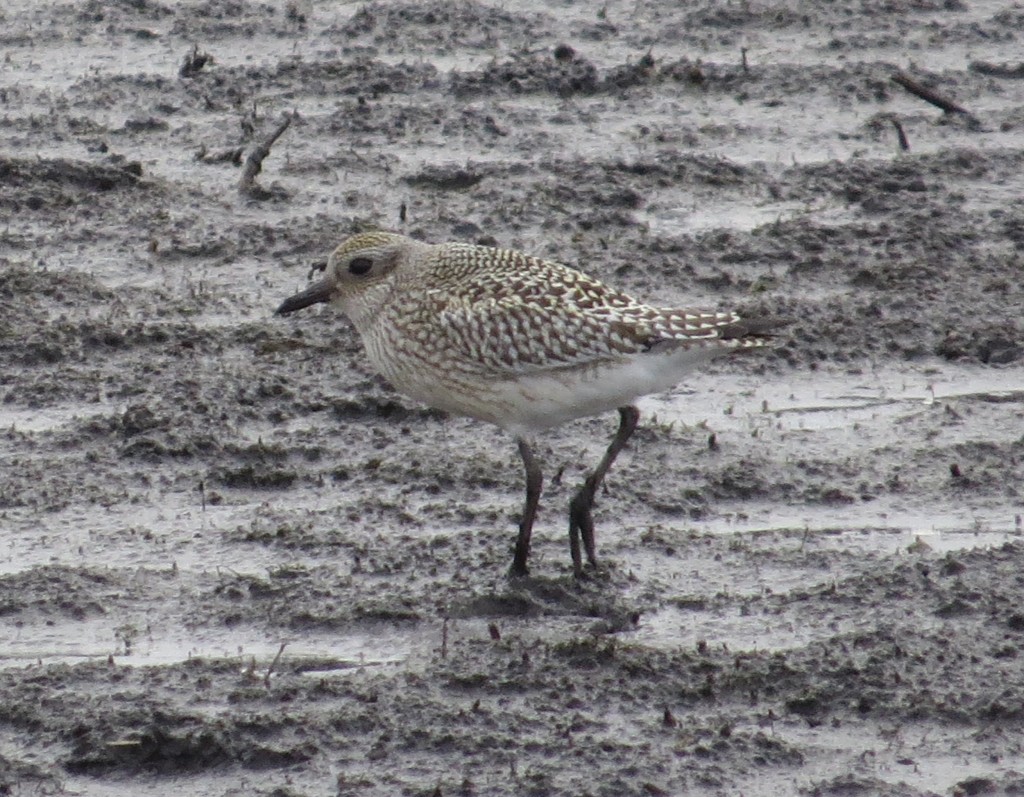 It was a good learning experience to sit down at home that morning with my Sibley’s after-the-fact and go over the finer ID points of a juvenile Black-bellied Plover vs. the very similar-looking juvenile American Golden-Plover.  Little did I know how soon I would put that knowledge to the test.

I picked Evan up from school that afternoon and asked him if he wanted me to drive him out to Carlson’s to see the Black-bellied Plover I had found in the morning.  He said he was up for it, so I was now making my second trip to the shorebird spot that day.  I was confident the bird would still be there as the hurricane winds were sure to ground anything for the day.

I was a bit cavalier about my birding.  I had left both pairs of binoculars in the other vehicle; all I had was my camera.  No big deal, I thought since there were only a handful of shorebirds to sift through.  Well, when we got there the scene had changed from the morning.  There were now more birds.  The huge, exposed mudflats were hoppin’. There were Pectoral Sandpipers. 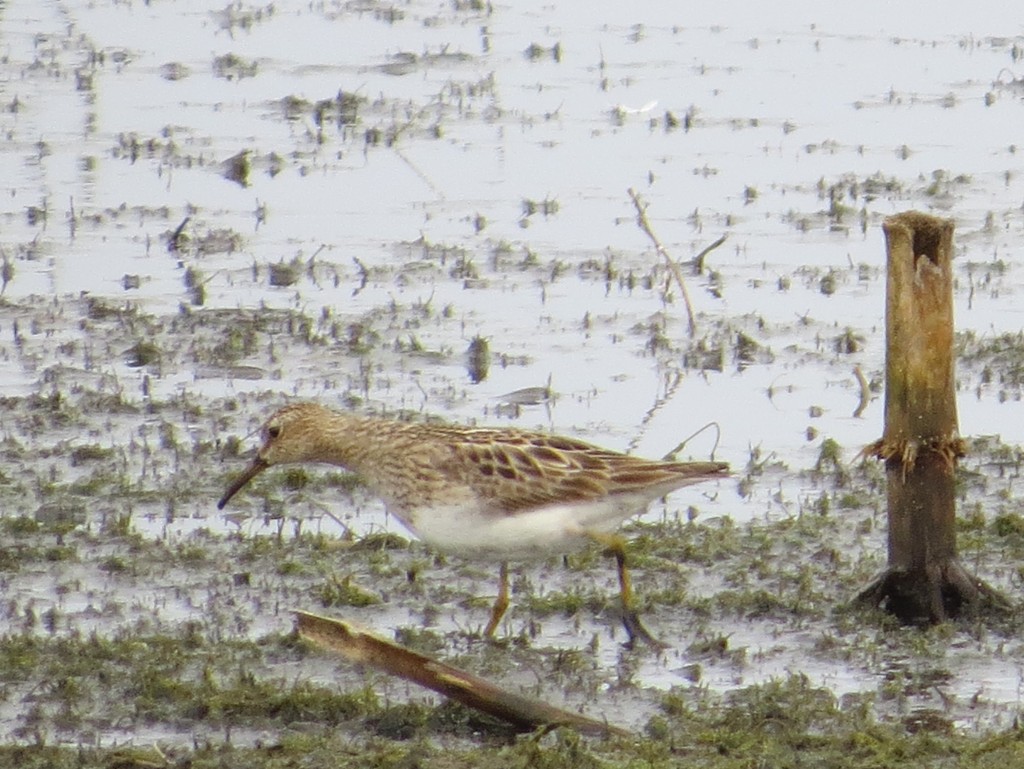 There were Solitary Sandpipers. 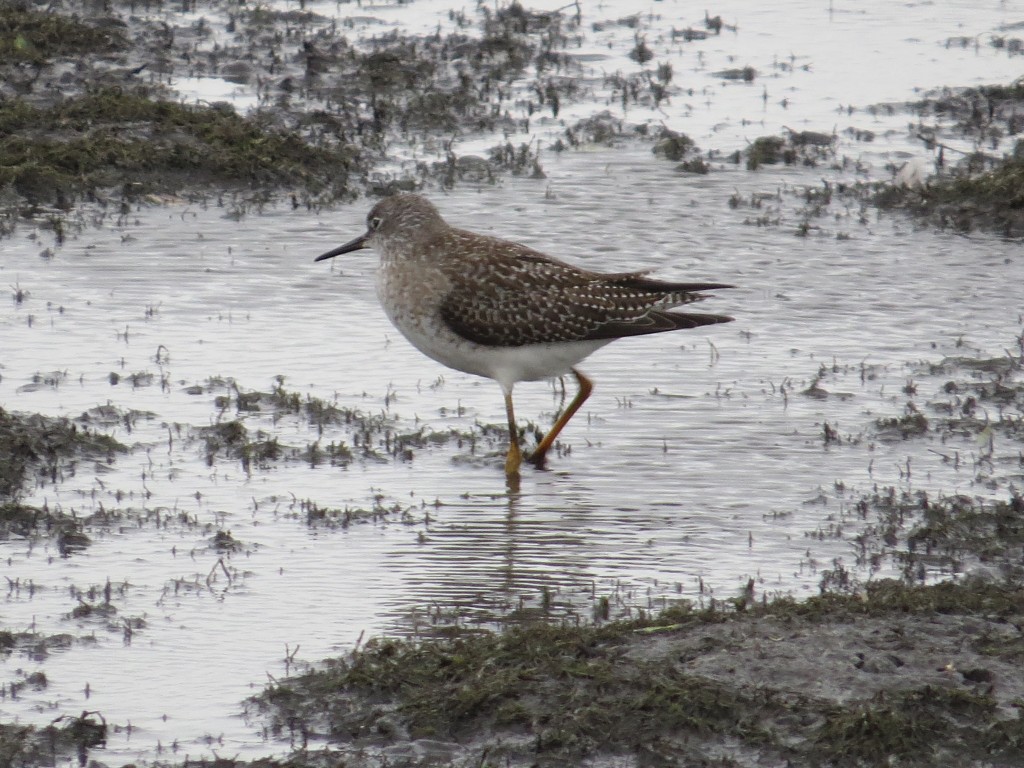 And there were about 50 DunlinXGreen-winged Teal hybrids all over the mudflats making it very difficult for a guy with just a camera to pick out a similar-sized Black-bellied Plover. 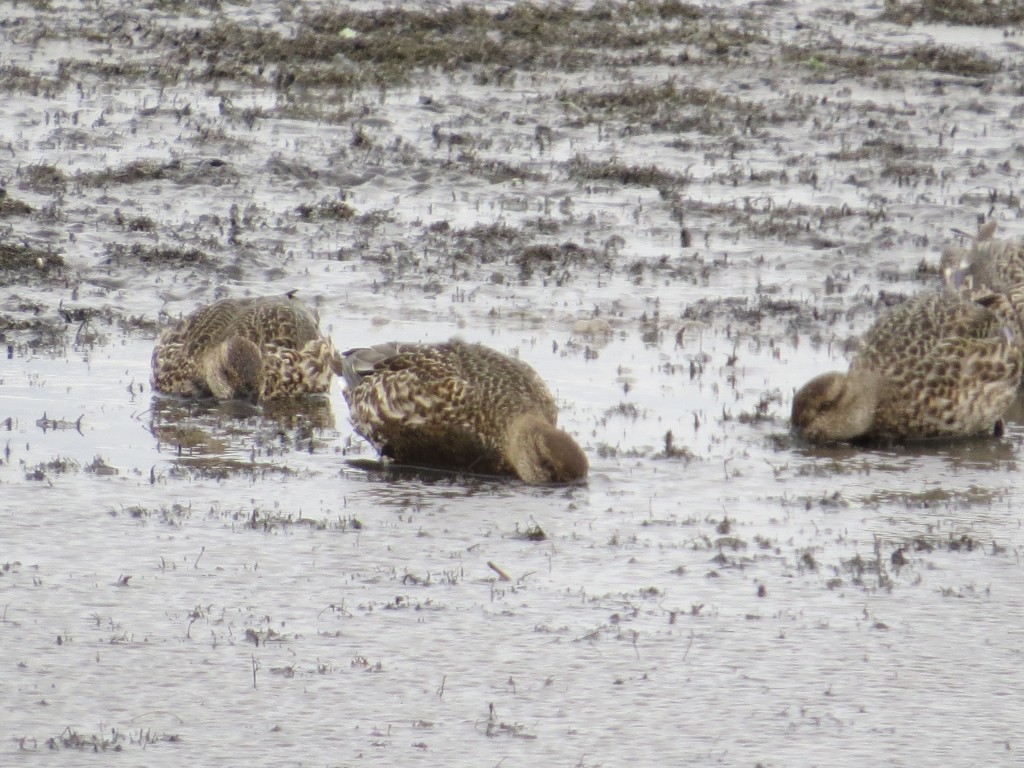 Then Evan hollered, “Dad! I see it!”  I don’t know how the kid does it.  He’s never looked at birds through binoculars.  He had never seen a Black-bellied Plover.  And here he picked out the plover camouflaged against the drab, muddy background not far from the road.  He’s got a keen sense of bird shapes and movements.  That very day before we got to Carlson’s, Evan told me the kids in his gifted and talented group had to answer a variety of questions earlier in the day.  One question was to name their favorite bird.  He said that the only bird the other kids could come up with was a Bald Eagle.  Not only does my kid know that a Black-bellied Plover exists, but he can pick one out having never seen one. {Proud birder parent moment.}

I might be giving Evan a little too much credit, though.  As I started snapping new pictures of what I presumed to be the same Black-bellied Plover, my morning’s plover study caused me to take pause with this bird. The smaller head, smaller pointed bill, and grayish undersides that I was seeing were spot on for the juvenile American Golden-Plover! It was unbelievable that I had now seen the two “big” plovers in the same day! 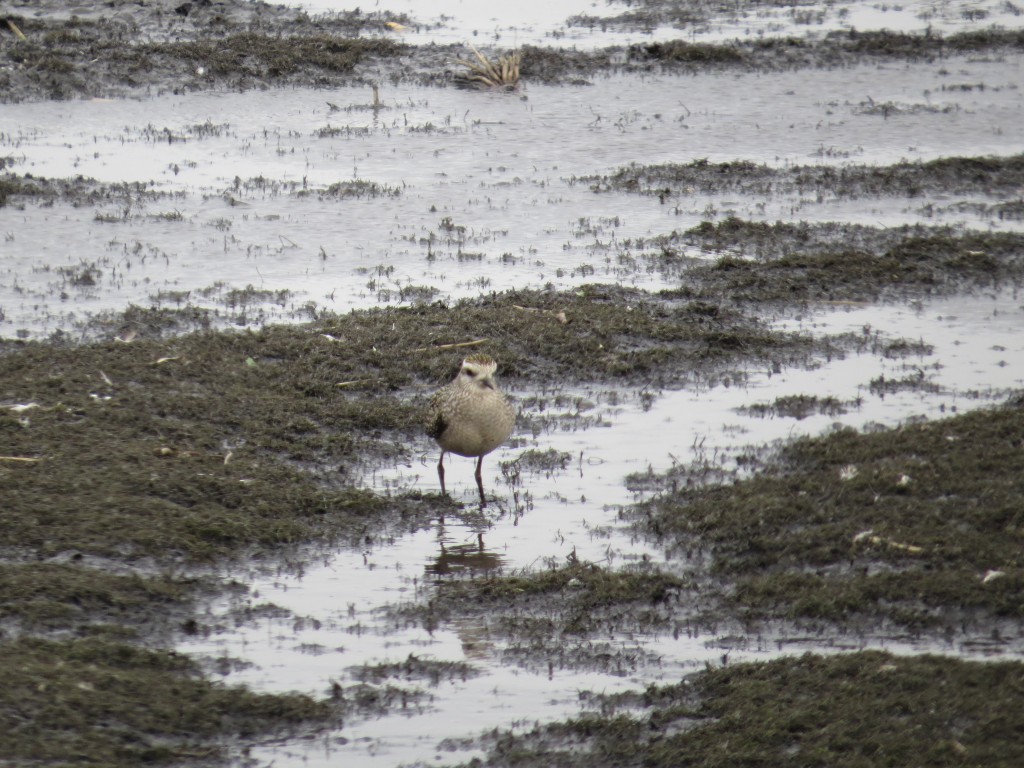 I told Evan what I was confident we had and his response was, “You’re welcome, Dad, for finding you a life bird.” Not just for me either.  I called Steve up right away and got him on the road since he had never seen one before.  He had no trouble finding and viewing it.  Neither did we as the AGPL kept coming closer to the road. 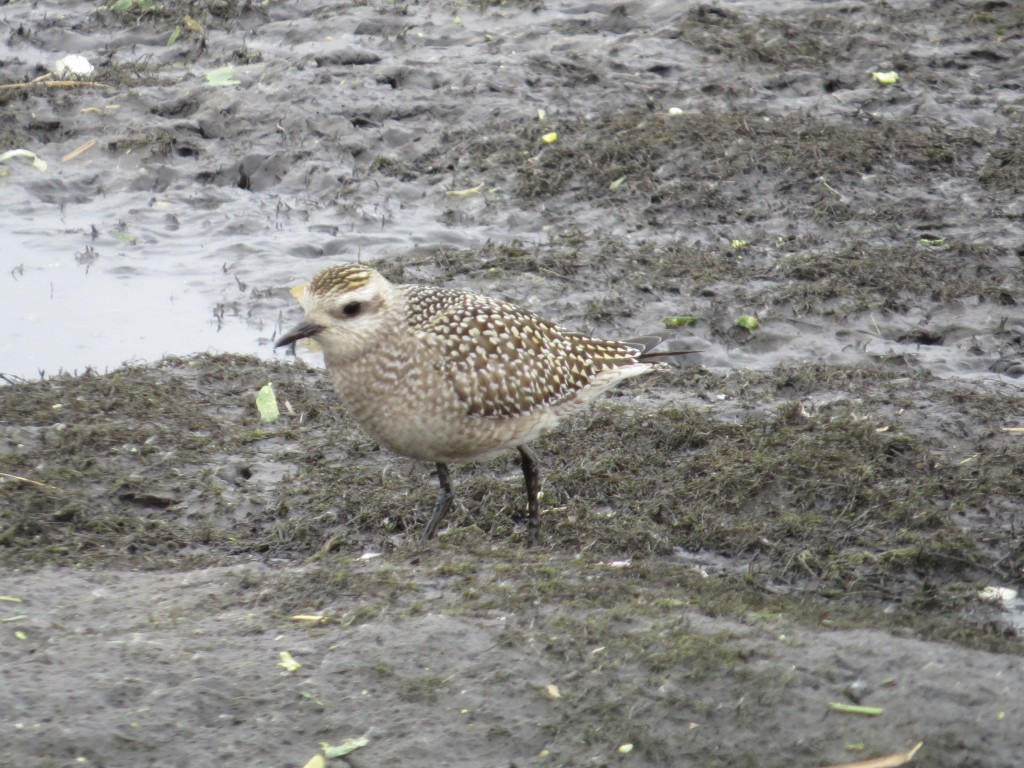 Finally it came in to crushing distance. Boom. 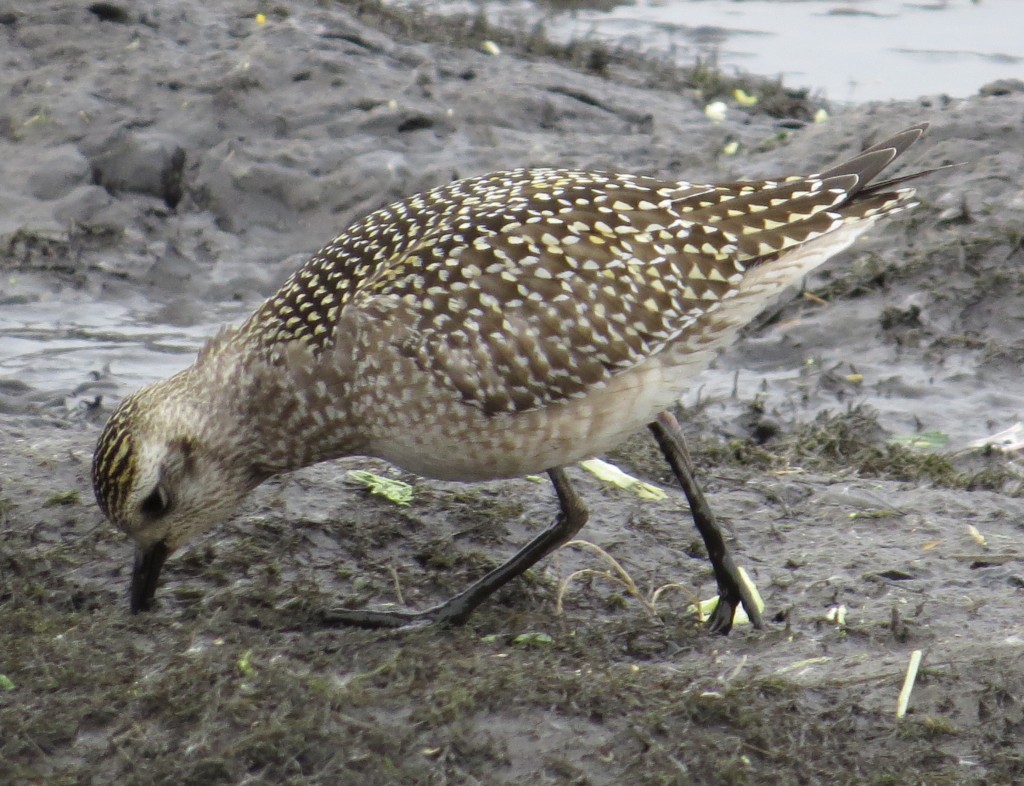 While we enjoyed this lifer very much, I kept up the search for the Black-bellied Plover so Evan could get it too.  Whether I was handicapped with my limited optics or whether it flew away, we just couldn’t come up with it.  Evan was okay with that.

These two plover species are by no means easy in any part of the state.  To get both of them as life birds on the same day still blows my mind.  And to think if I hadn’t studied or if Evan hadn’t been along, it wouldn’t have happened. So, thanks Evan!  But as incredible as this day was, the following day would prove to be just as exciting as I would get a life look at another bird and then quickly turn my attention away from it and toward a much more unexpected non-lifer.