So what does one do to celebrate the accomplishment of a major birding goal that was several years in the making…go to Disney Land? Take an Owl victory lap, visiting some favorite Owls? No, these are not the thoughts of a birder. There’s always a queue of birding priorities, and now that FEPO was knocked off, another bird demanded immediate attention. It nearly cut short the FEPO experience, though I vowed not to let it. That bird was Arizona’s first record of a White-throated Thrush, a vagrant from Mexico. Obviously such a bird had created quite a stir in the state and even national birding scene just a few weeks prior to my visit. I watched the reports with amusement and wasn’t too concerned with it.  I was undaunted in my FEPO pursuit and was not about to let another Mexican bird scrap those plans.  And besides, the Thrush had hung for weeks, entertaining several hundred birders by now. It would be there, but would I?

Seeing as how FEPO was found immediately and enjoyed thoroughly, we had ample time to swing over to Madera Canyon to try for THE THRUSH.  But first, we had a windy desert road to drive and a lifer Cassin’s Sparrow to nab thanks to Caleb, the sharp-eyed chauffeur.  This was a nice little bonus that I did not foresee. 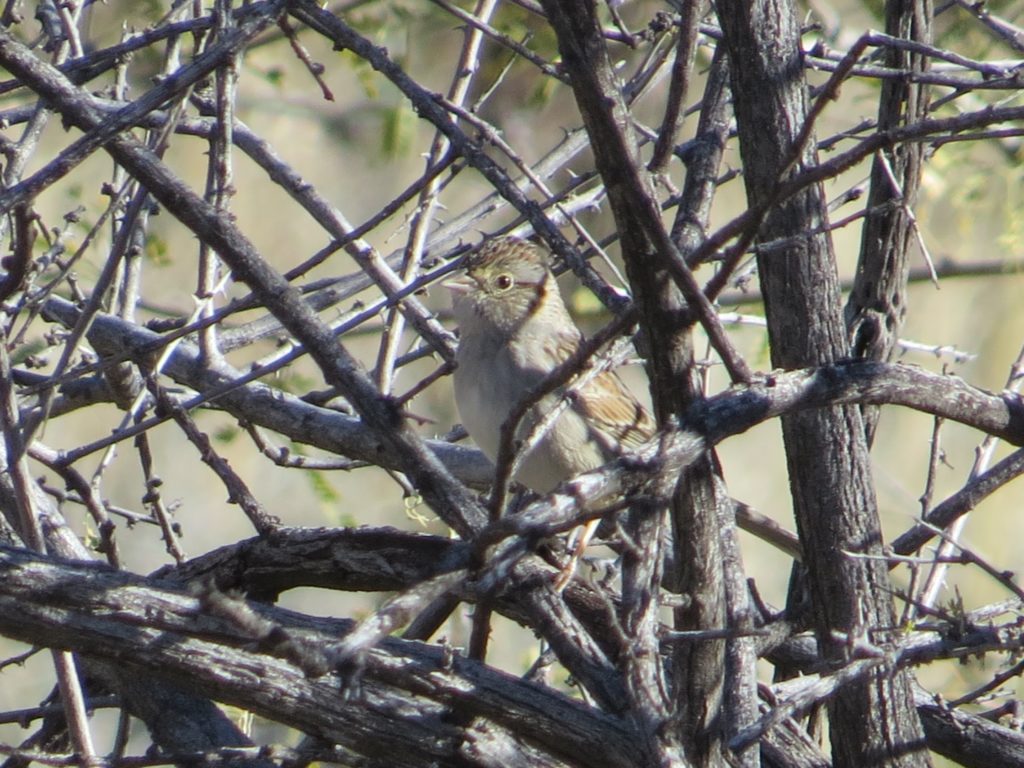 The mood on the way to Madera was light and easy.  We got the FEPO. I honestly didn’t care if we dipped on the Thrush.  But with that said, I still wanted to see it pretty bad too. It’s an insanely good bird, and just like the Fan-tailed Warbler, SE AZ opportunity was knocking. Once again I found myself in the intersection of right place and right time. Thrush or not, it’s always the right time to go to Madera Canyon. 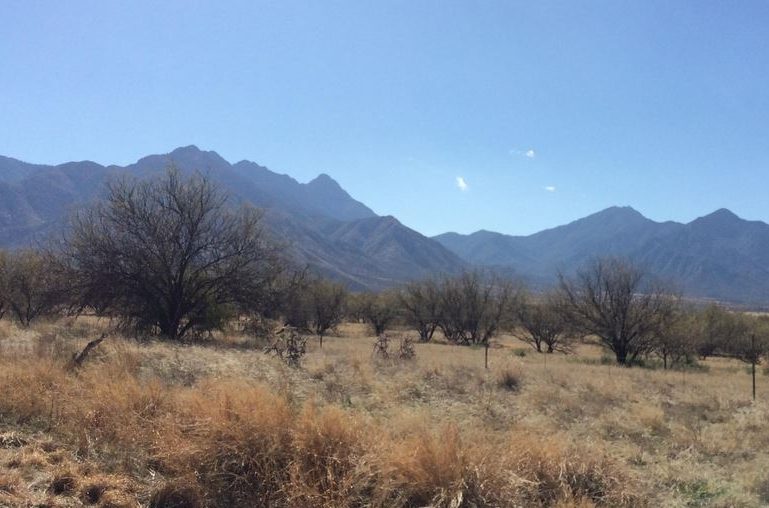 After we parked at the Proctor Road parking lot, we followed a paved trail where it had been seen. Like a bird dog, Caleb immediately disappeared from the trail in search of quarry.  Again, Tommy was in total relaxation mode as the Boy was whacking the bushes for the White-throated Thrush and a Black-capped Gnatcatcher for me.  Tommy and I idly strolled the trail, hoping to turn American Robins and Hermit Thrushes into the one thrush species that counted. Mexican Jays were loud and huge but not worth looking at, considering.  We talked with other birders there trying to get the latest on the Thrush. Best we heard was that it was seen a couple hours prior. That was good news.  It was around, and the Boy was on it.  Some birders we visited with told us about a snoozing Whiskered Screech-Owl further up trail.  The Owl victory lap idea was taking hold, distracting Tommy, Gordon, and me from the new major target of the day. Plus, you know, Caleb was out there, somewhere, handling things. 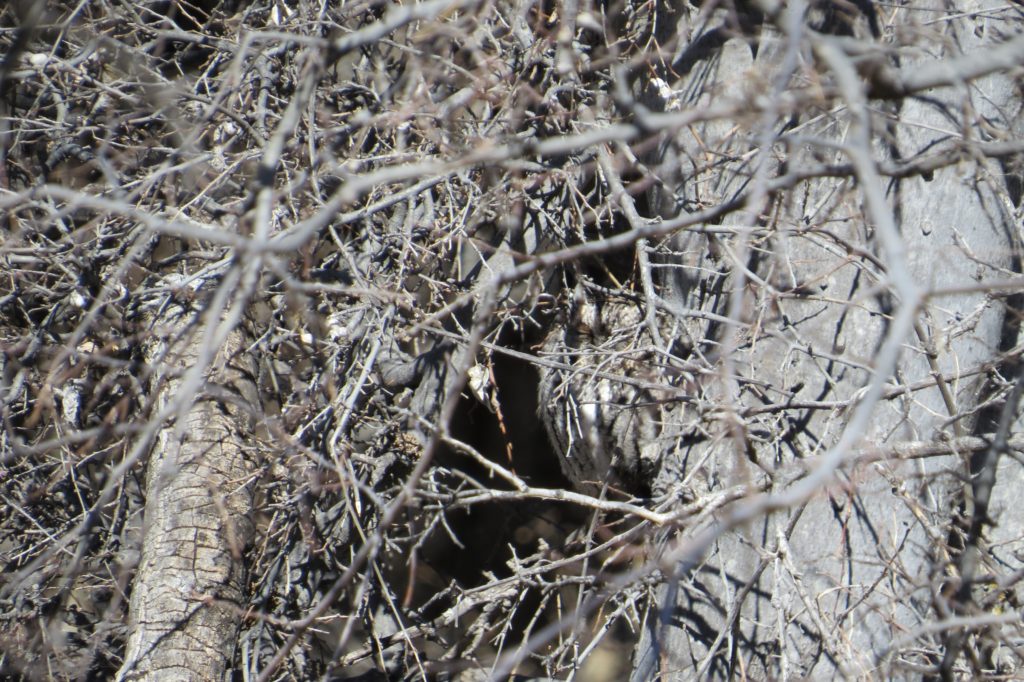 How someone spotted this thing I’ll never know. I could barely find it with multiple people pointing to it. 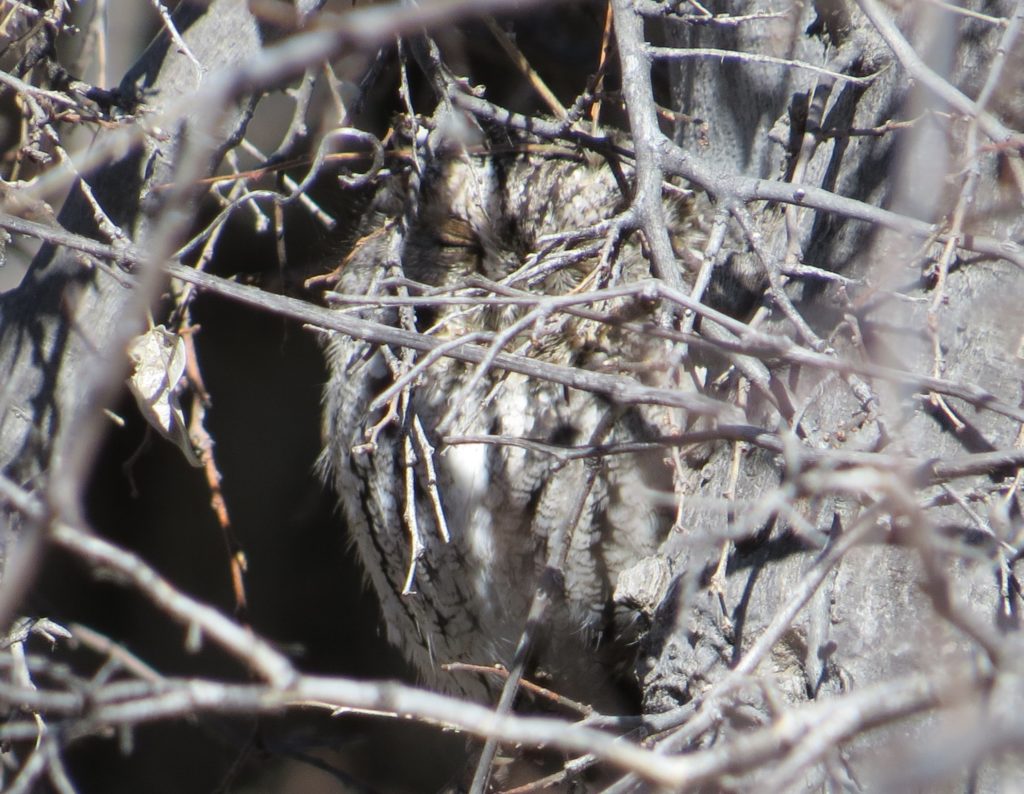 Tommy and I had barely resumed our Thrush sorting when I asked Tommy whatever happened to Caleb. I no sooner said those words, and the Boy came sprinting down the path toward us hollering (without breaking stride) that the Thrush had been spotted further up the trail.  Caleb continued running and proclaiming the good news to everyone and their cousin, birders or not, that the White-throated Thrush was present.

Tommy and I hustled up to the spot and caught a quick glimpse of it in the open on the ground before it retired to the treetops in terrible light. Pretty neat regardless. 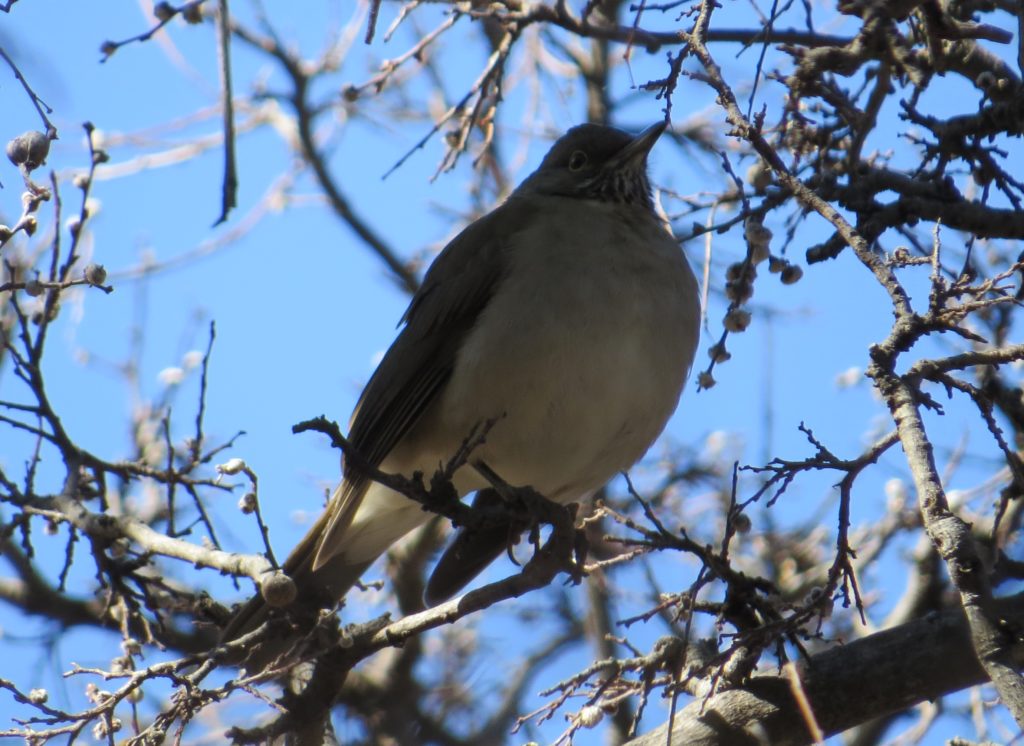 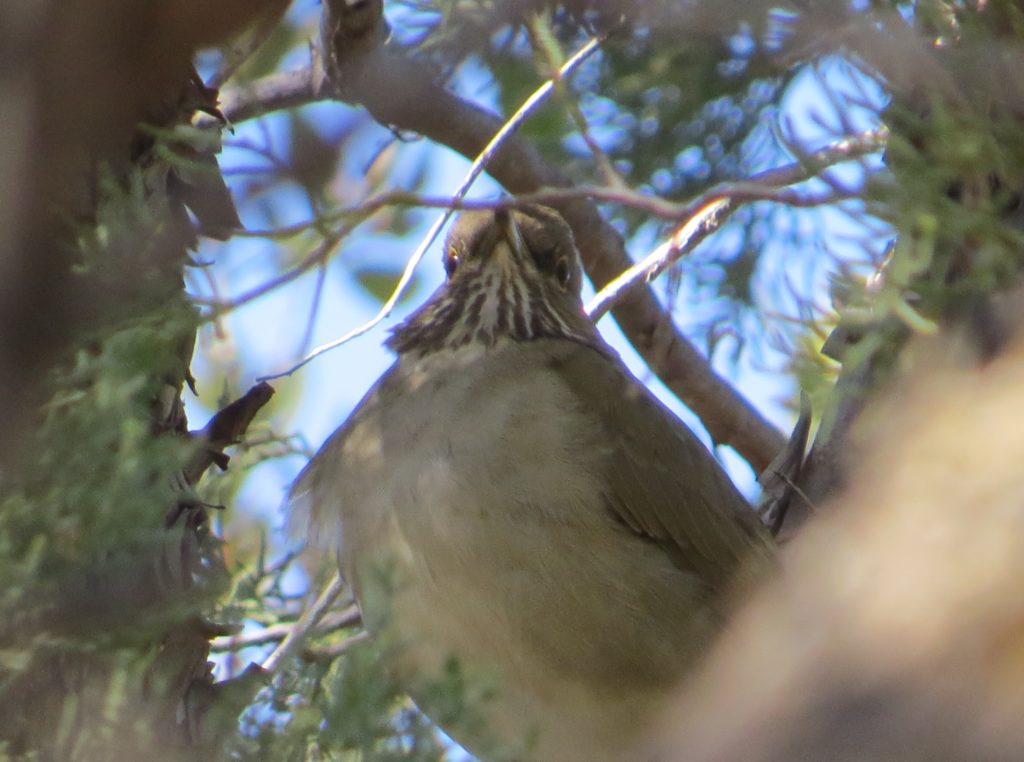 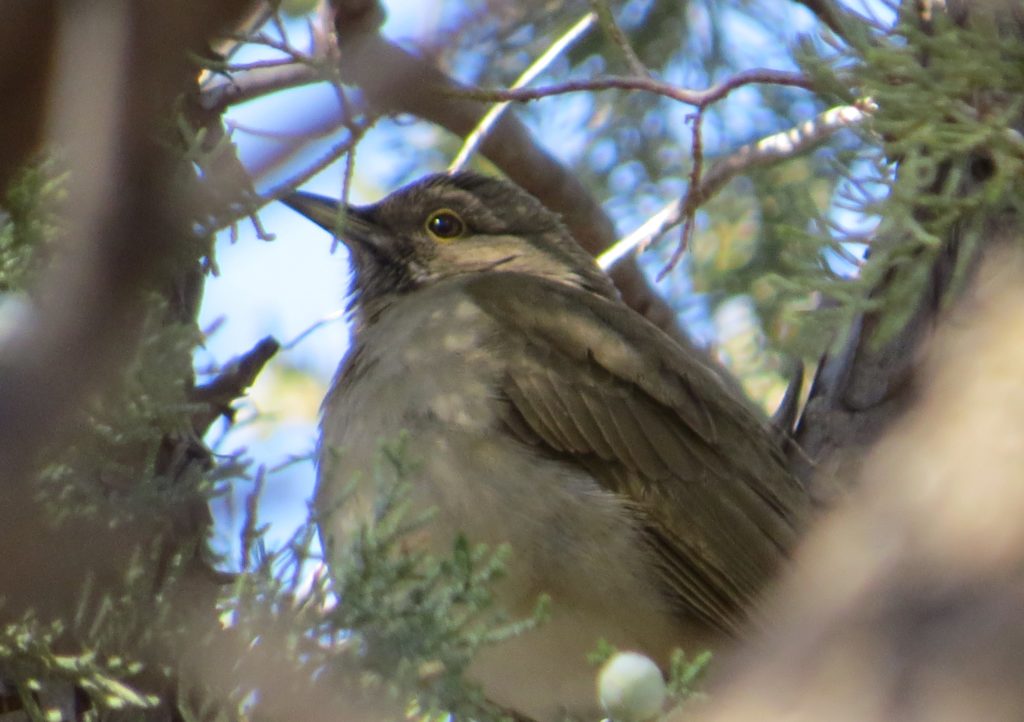 A bit of serendipity happened at the parking lot on the way out when a birder recognized Tommy.  Turns out that birder was Linda Grant, the original finder of the famous Thrush.  Linda had come back for better photos after her first ones were harried as bird photos can be when you realize you have a Mega and need to get the word out immediately.  Tommy had written a great blog post on Linda’s discovery of the White-throated Thrush and on over two dozen birders’ reactions to the find.  Linda and her husband were able to tell Tommy how much they enjoyed the post, and Tommy clearly enjoyed meeting this hero to hundreds of birders.  A cool moment. 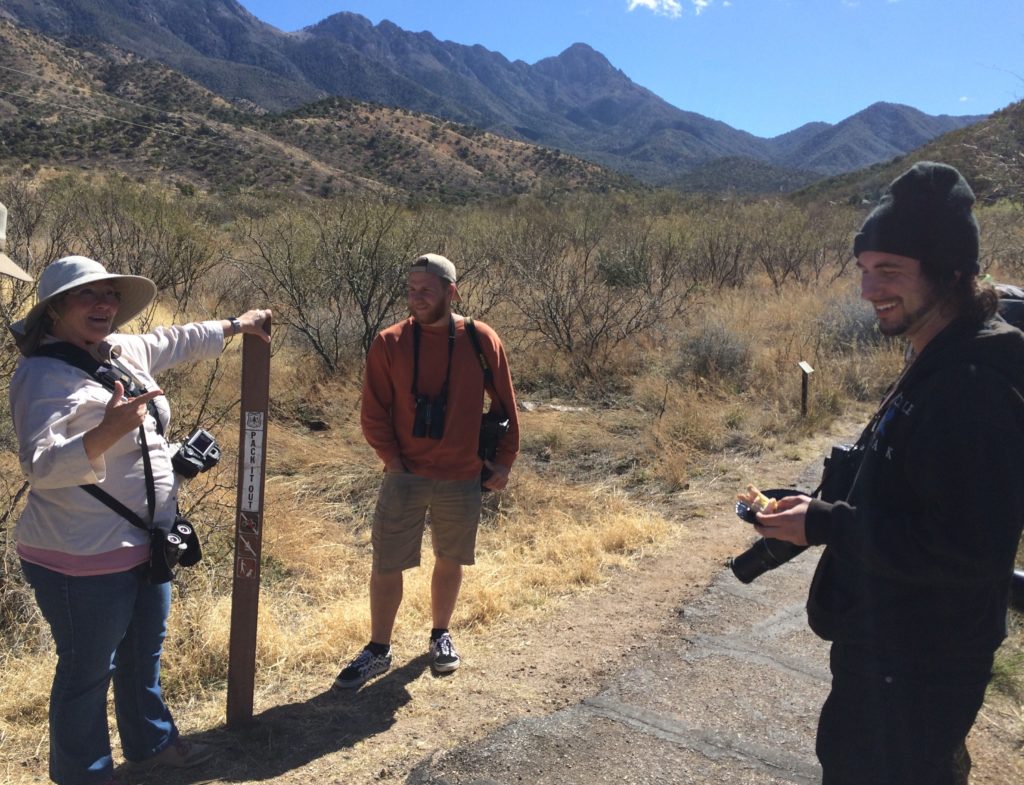 The intensity of Madera Canyon never ceases to amaze me.  One would think that things would be pretty chill after my lifer FEPO and WTTH with a side helping of Whiskered-Screech. But it wasn’t.  A stunning male Elegant Trogon had been spending the winter in the lower elevations near the White House Picnic Area, and fellow Thrush seekers had said it was around this day.  Since that brief encounter with a Trogon a few years back higher up on the Super Trail, I have wanted a better experience with this bird.

This was the day. We saw the ELTR paparazzi staked out at a pyracantha tree loaded with berries along the road. The tree is a favorite buffett of the Trogon. Unfortunately we were told the Trogon had just flown off, but not to worry because it would be back.  I’m an impatient birder, especially when borrowing time against a family vacation. So I looked into the oak woods in the direction people said it flew. And that’s when I spotted it–one lady up on the hillside aiming a massive camera at a random spot in the trees. There would be only one reason for that.  I scrambled up the rocky hillside and quickly found her target. 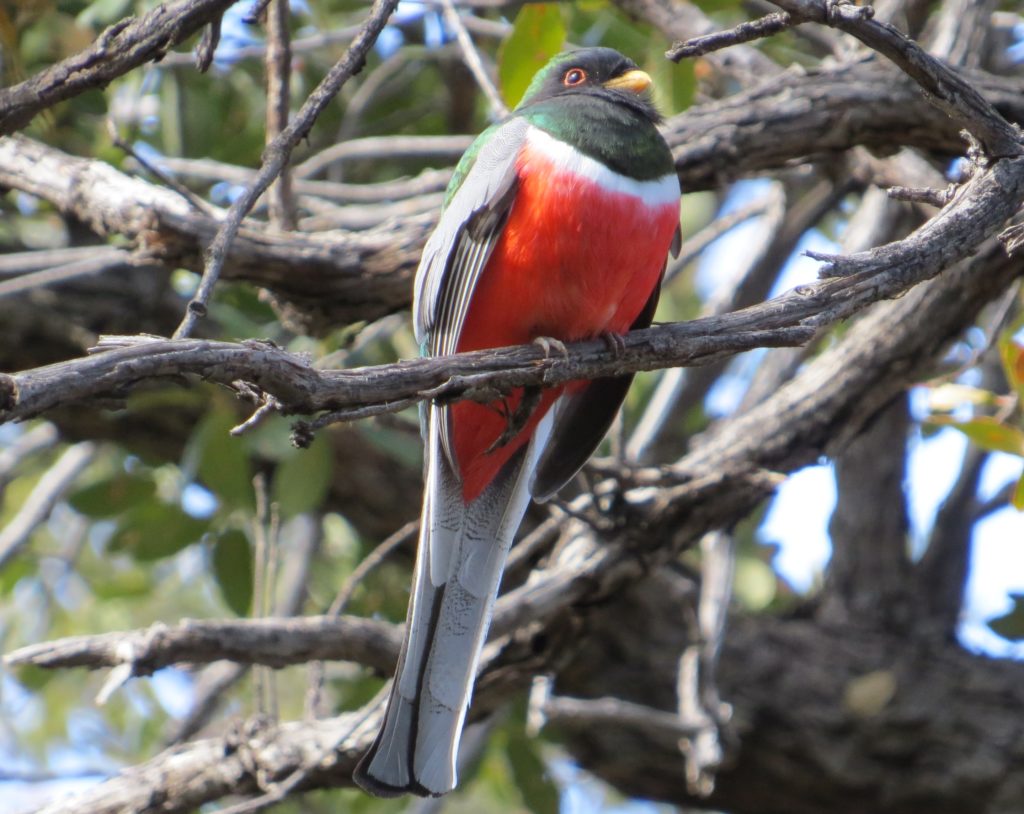 The Trogon was incredibly tame and would sit for long periods of time on a perch before moving a short distance, easy to find and easy to approach.  SE AZ never ceases to amaze me. This was a stunning moment. And, AZ birders will have to forgive me, but this was just as big a thrill or bigger than the Thrush. 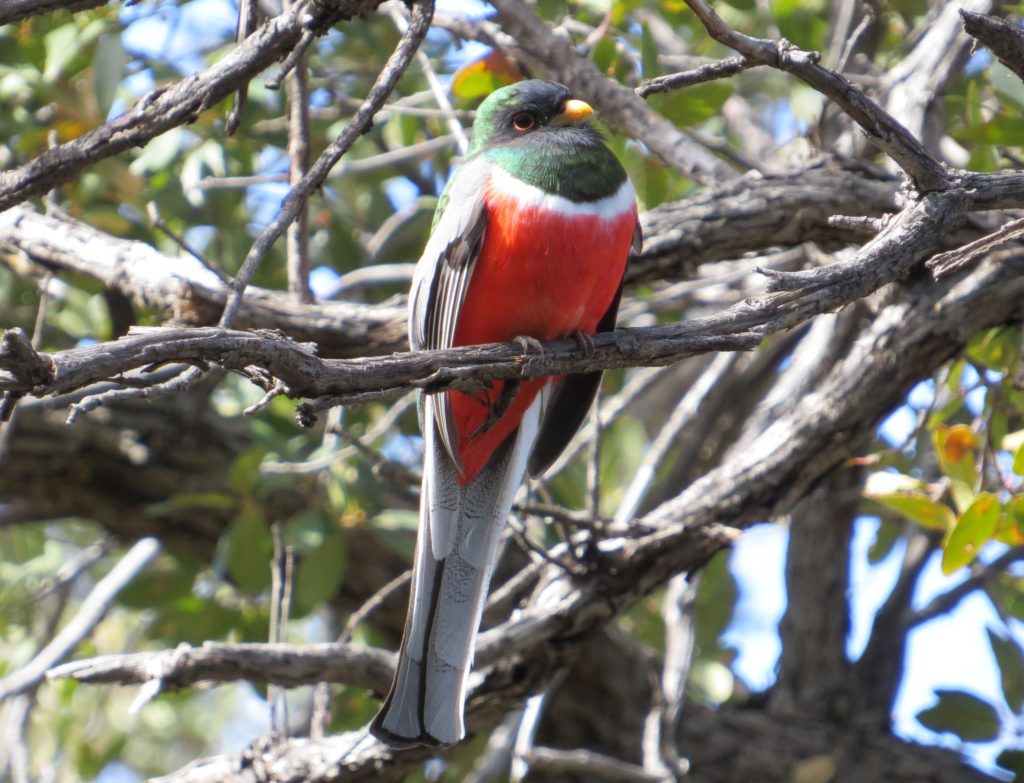 In 2015 my only real photo of the Elegant Trogon was from the back.  This was a refreshing and a much yearned for change. I, of course, got to see the back this time too and once again admire that coppery tail that it was once named for. 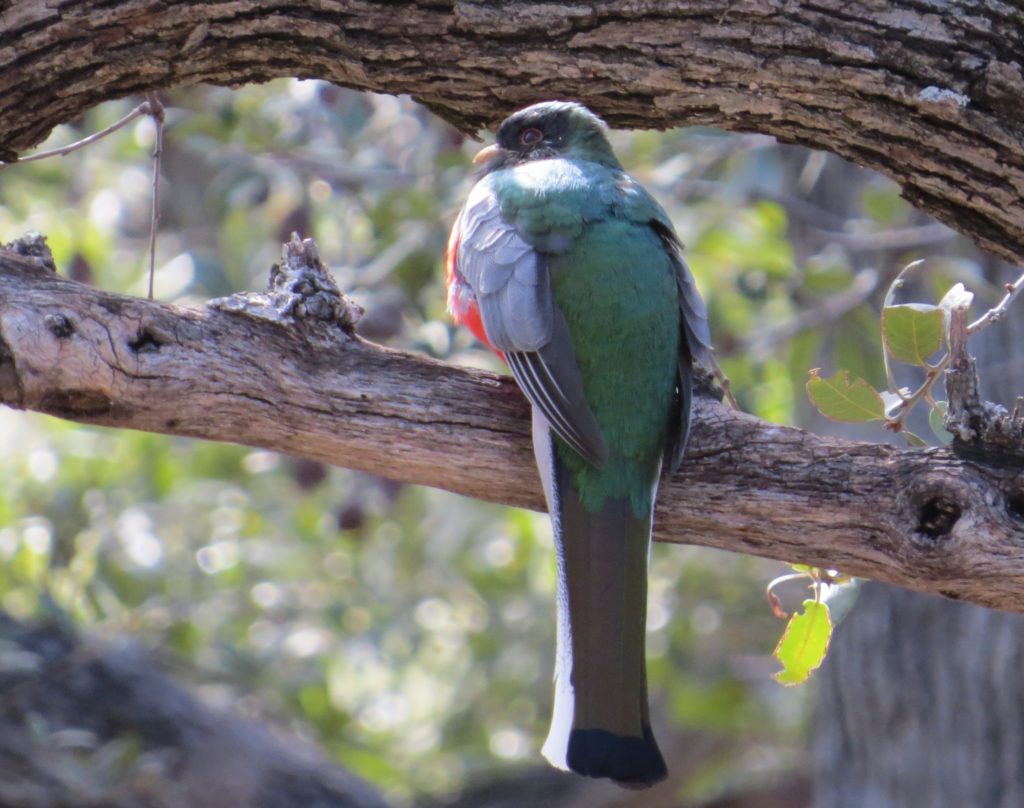 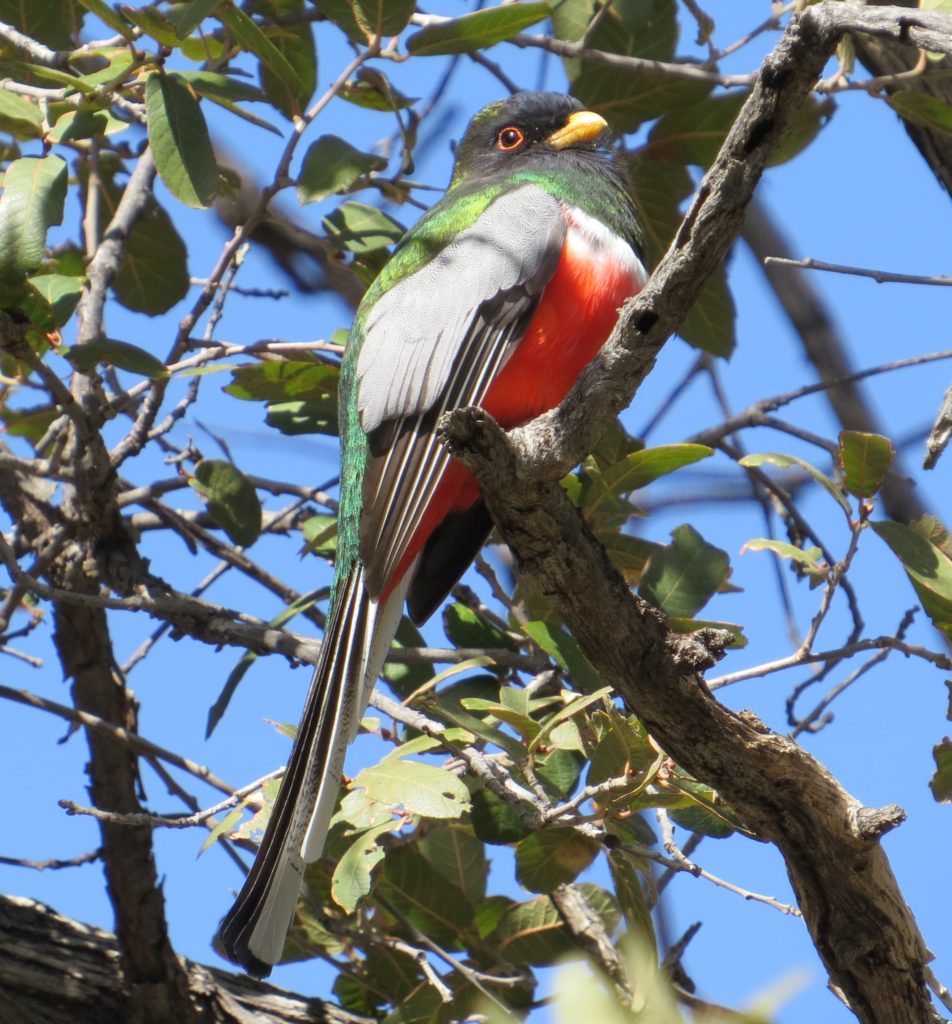 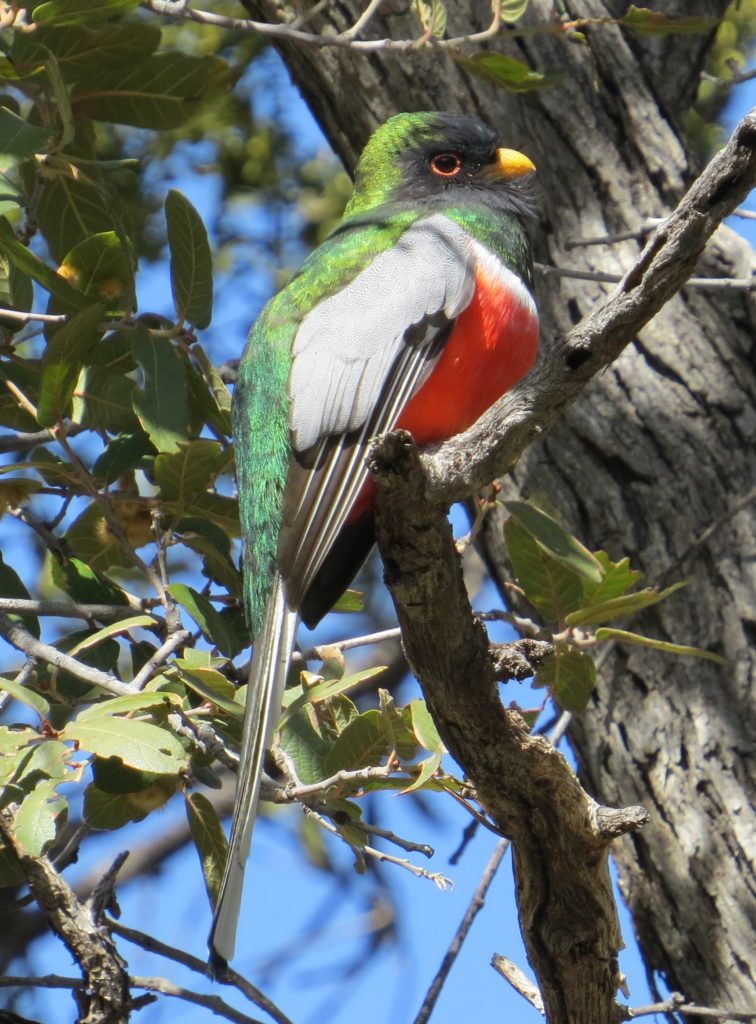 This was a Trogon-crushfest, enjoyed by even the most experienced of locals… 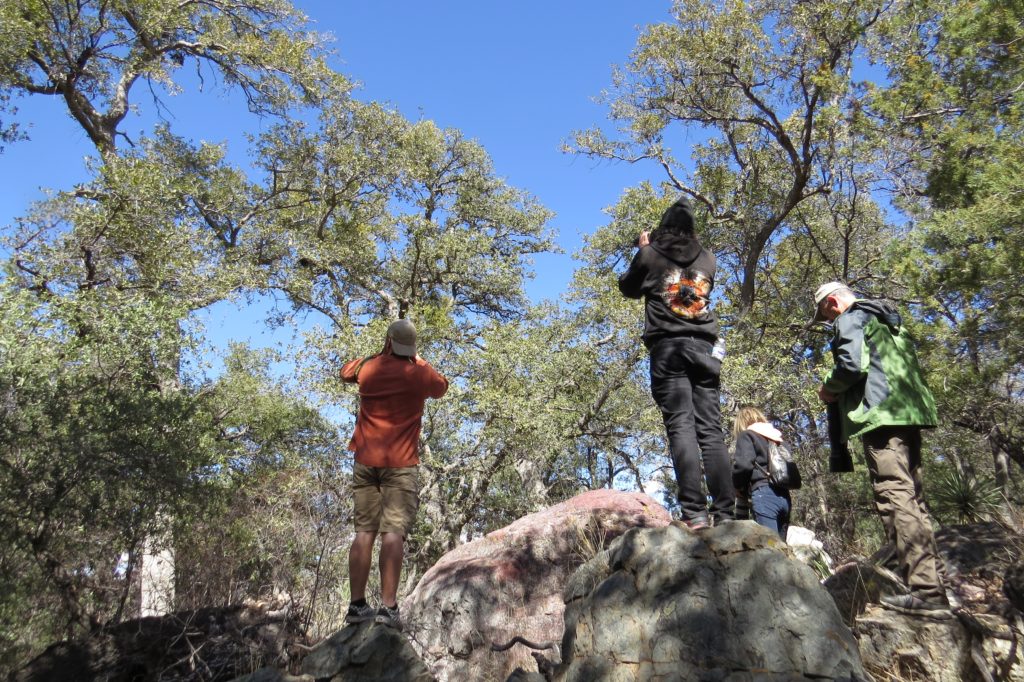 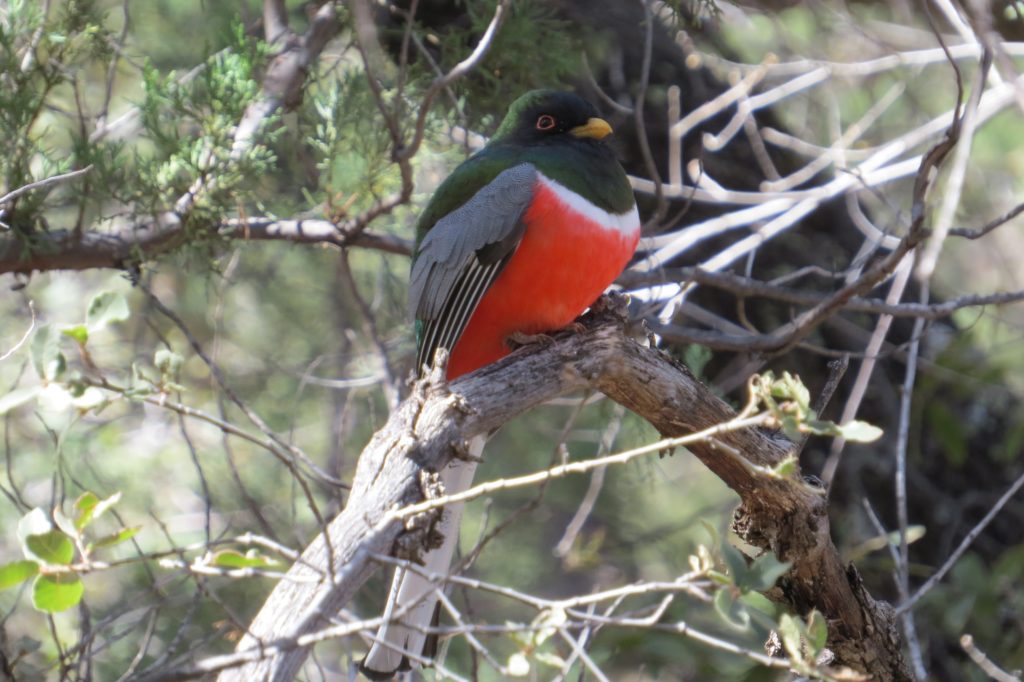 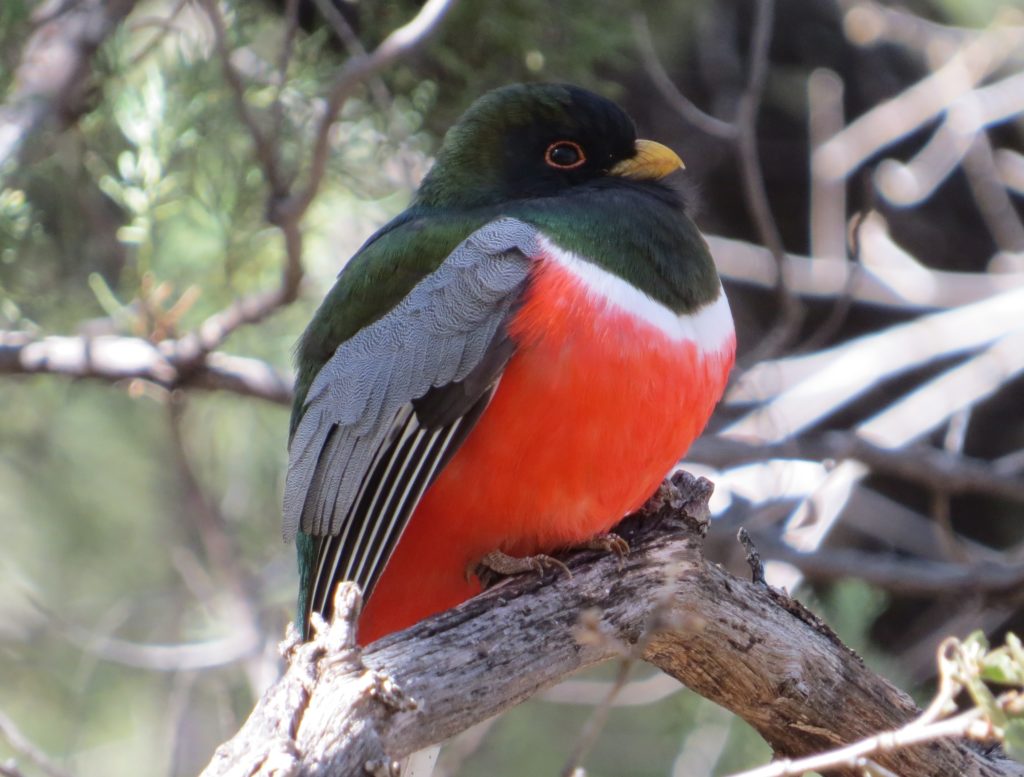 Obviously I had a hard time prying myself away from that bird, but the clock was ticking and the birding queue had a new line leader. Would I have liked to go to the Santa Rita Lodge and try to get a better look at a Blue-throated Hummingbird? Yes. Would I have liked to pick up some fresh Trogon gear at the gift shop? Also yes. But did I? Sadly, no. Time was slipping by, and the one bird I needed was in nearby Green Valley.  Lawrence’s Goldfinches have irrupted this winter all over the place, and the Canoa Ranch was a stronghold for them. I needed to grab this bird while I could since this was the year for that bird. I have never seen reports of them in other years on my visits. But first we made a quick stop down by Proctor Road to look for a Black-capped Gnatcatcher. No dice, again.

Thankfully, the LAGOs were where they were supposed to be, if only for a minute. 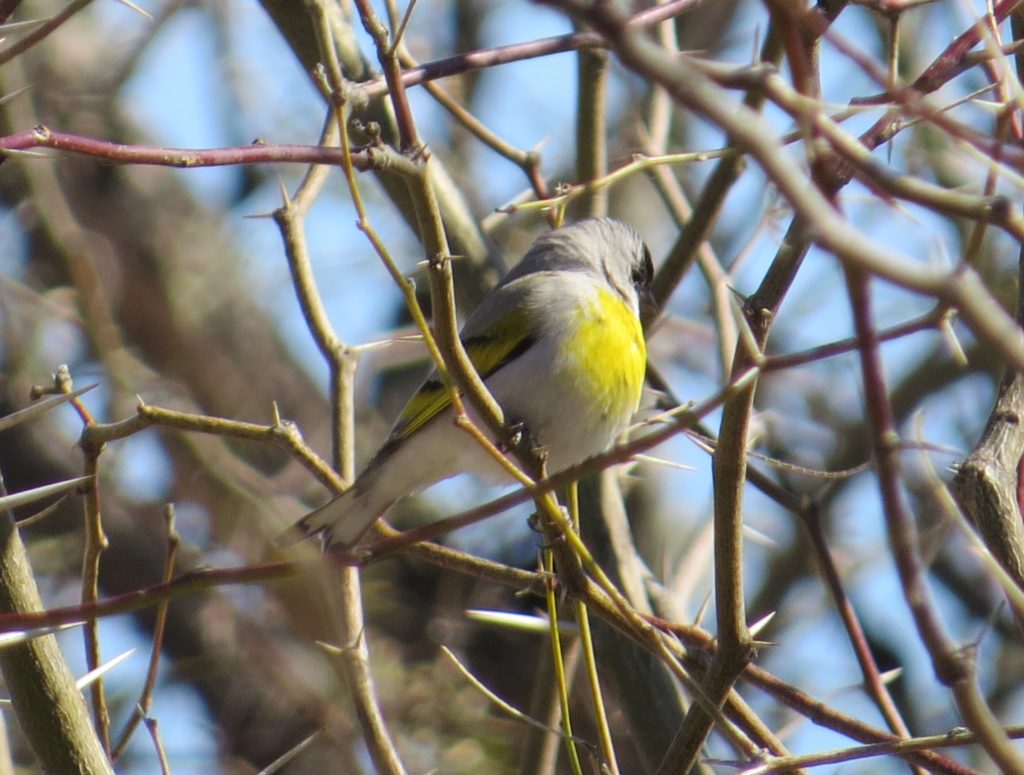 It was now time to bust back to Mom and Dad’s. Mom was putting on a spread for the birders and non-birders.  By the end of the day we were all stuffed–with good food and good birds.

We scarcely had time to sleep off the food/bird coma as Dad, Gordon, Tommy, and I had a date with destiny early the next morning.  After putting it off for many years, it was finally time to reconcile my staggering AZ Thrasher deficit.  I was finally going to the Thrasher Spot, a place west of Phoenix known by every serious birder. It’s even marked on Google Maps.  Thrashers had never been my thing as I always opted for the flashier and owlier birds of AZ, so it never made it to the top of the queue. But now with five potential life birds out there with practically nothing else for me to pursue in the state, I was eager to finally go. I’m glad I saved this little cache of lifers for so long.  I don’t think I would have appreciated it nearly as much in my early birding career.

Now most people might look at this and see a wasteland with random fire pits and broken plastic chairs with the rising steam from the Palo Verde nuclear plant as a backdrop, steam from a plant not cooled by a natural body of water but by treated sewage from nearby municipalities…  But a birder sees a beautiful landscape, full of opportunity. For at the center of this photo sits the lightly colored LeConte’s Thrasher, singing his song above the scrub. 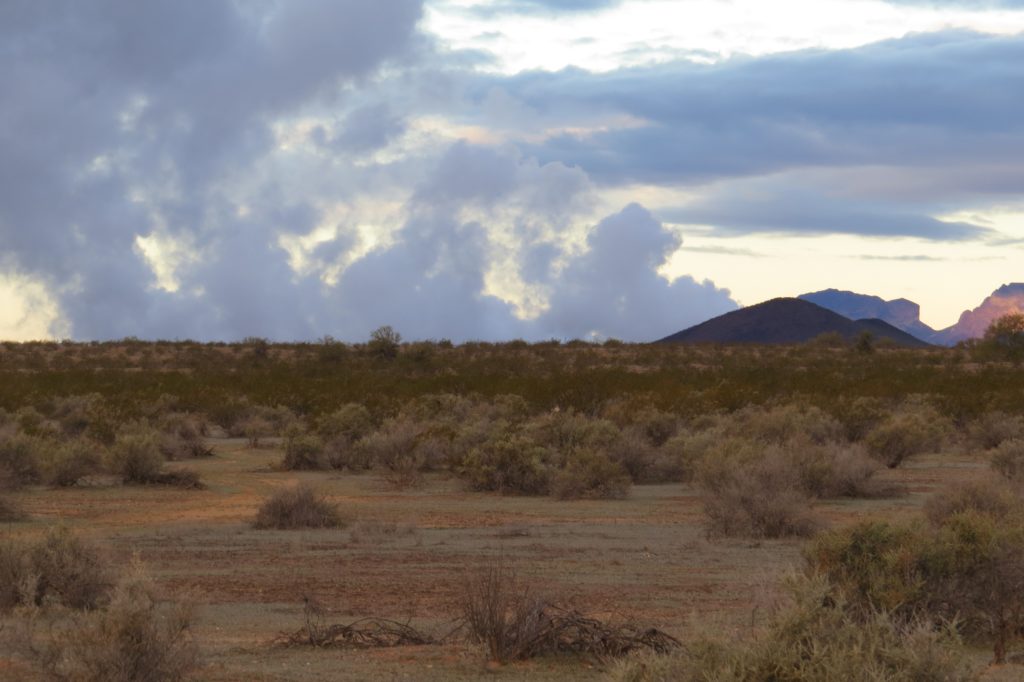 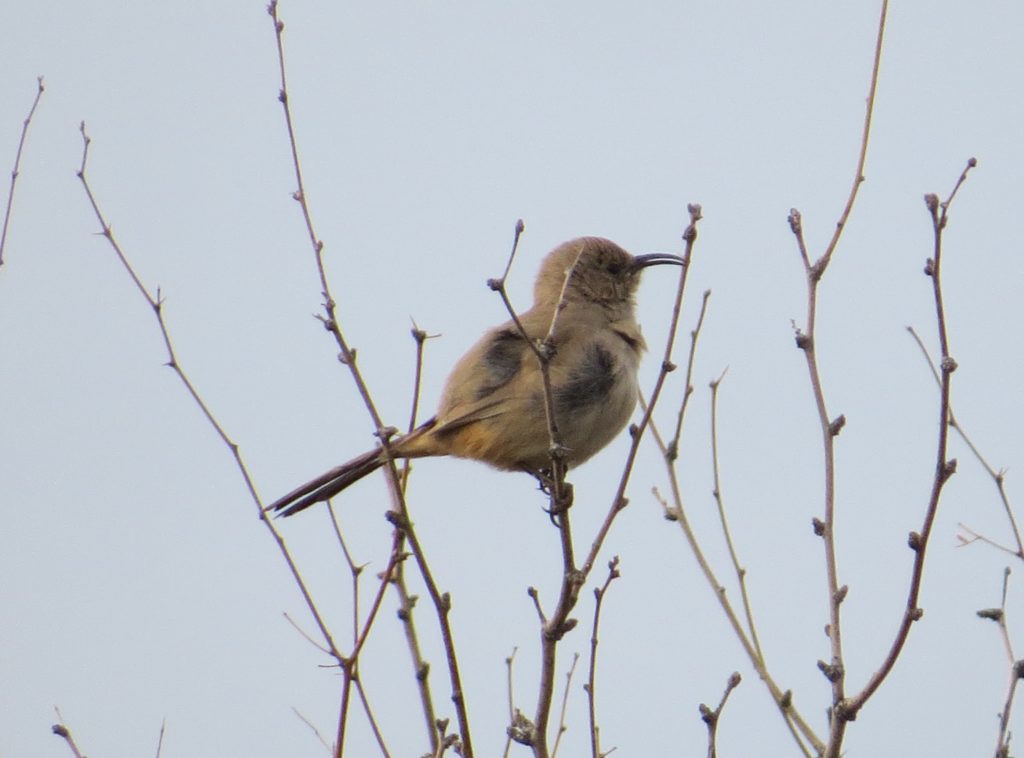 It was one lifer down with four to go.  Two thoughts struck me on my first visit to the Thrasher Spot. One was that I couldn’t believe how flat the ground was. 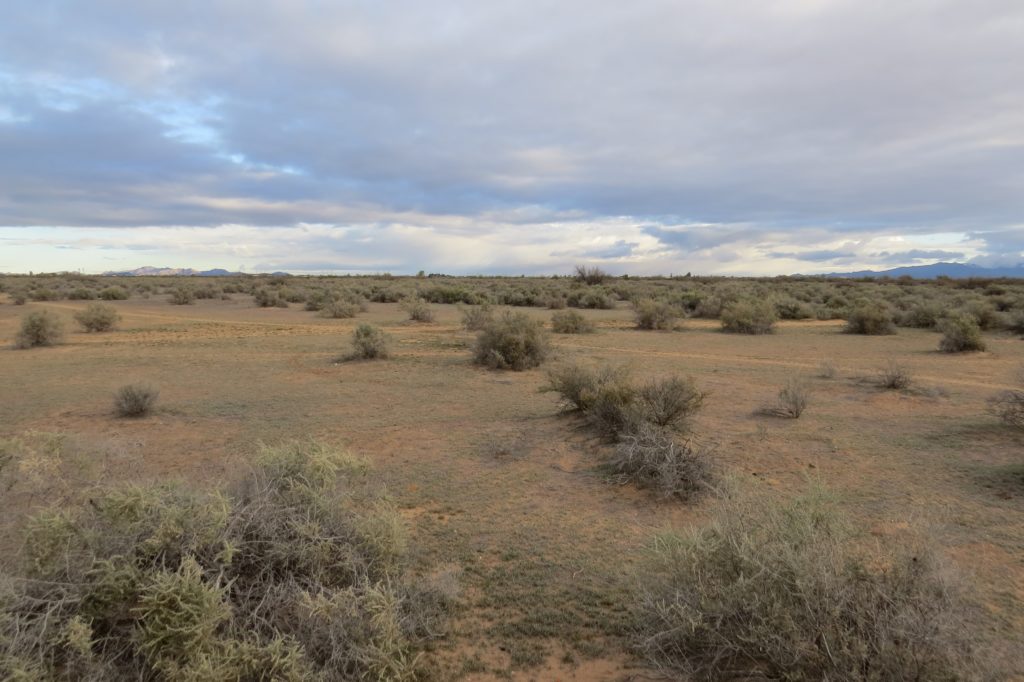 The other was that I had an expectation of easy lifering in short order with minimal walking. From other blogs I’ve read over the years, I had this thought that we’d just walk a short ways and crush all the Thrashers and the two Sparrows in the same bush.  I couldn’t have been more wrong.  At least the walking was easy. 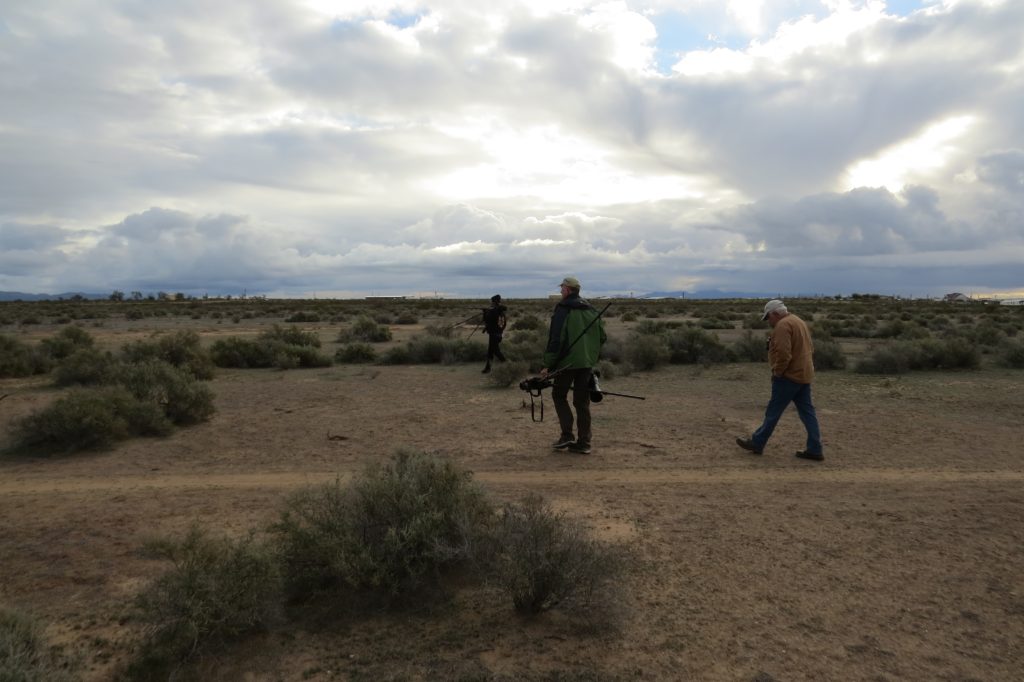 Though not completely unexpected, there were sightings of a couple different old men wandering alone and somewhat aimlessly trying to tally some Thrasher lifers for themselves.  At least I wasn’t as late to the party as these guys. The sparse saltbush- studded landscape was not only good habitat for the occasional septagenerian but also for numerous Sagebrush Sparrows (lifer) that would run with tails held high from bush to bush. I was shocked to learn they didn’t respond to pishing.  What kind of Sparrows are these anyway?  Good looks at these birds and the others were tough to come by. Pressing on and going wider in our search efforts, we eventually locked up a Bendire’s Thrasher lifer. 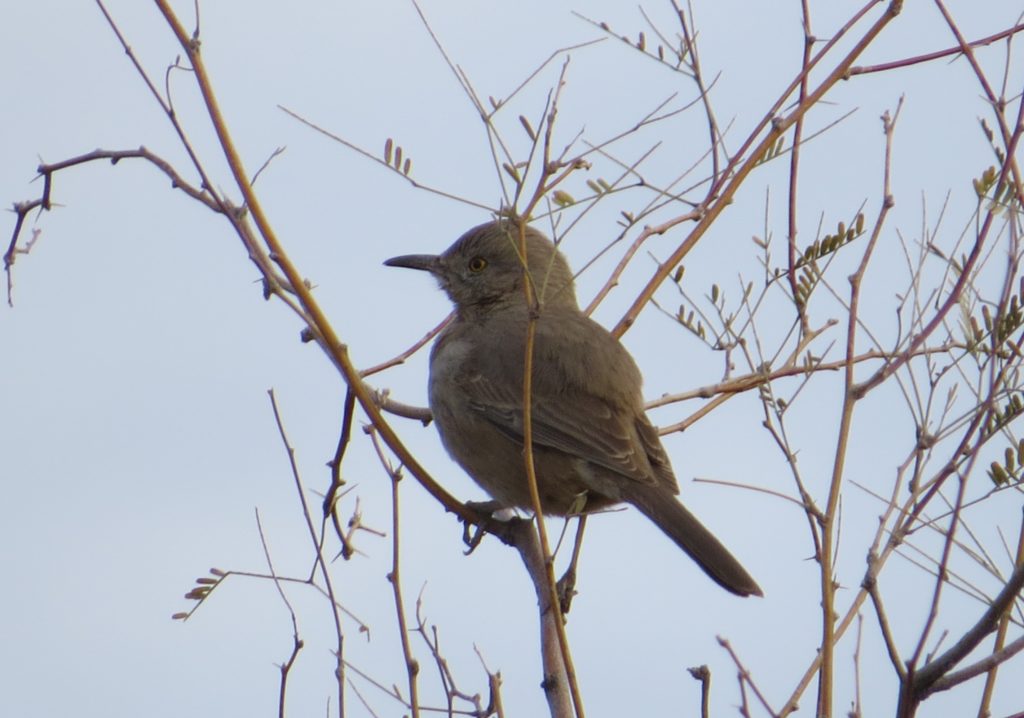 By this time, the sun was finally showing itself and warming up our frozen bodies. The birds seemed to enjoy it too as we finally started to get some good looks of perching Sagebrush Sparrows. 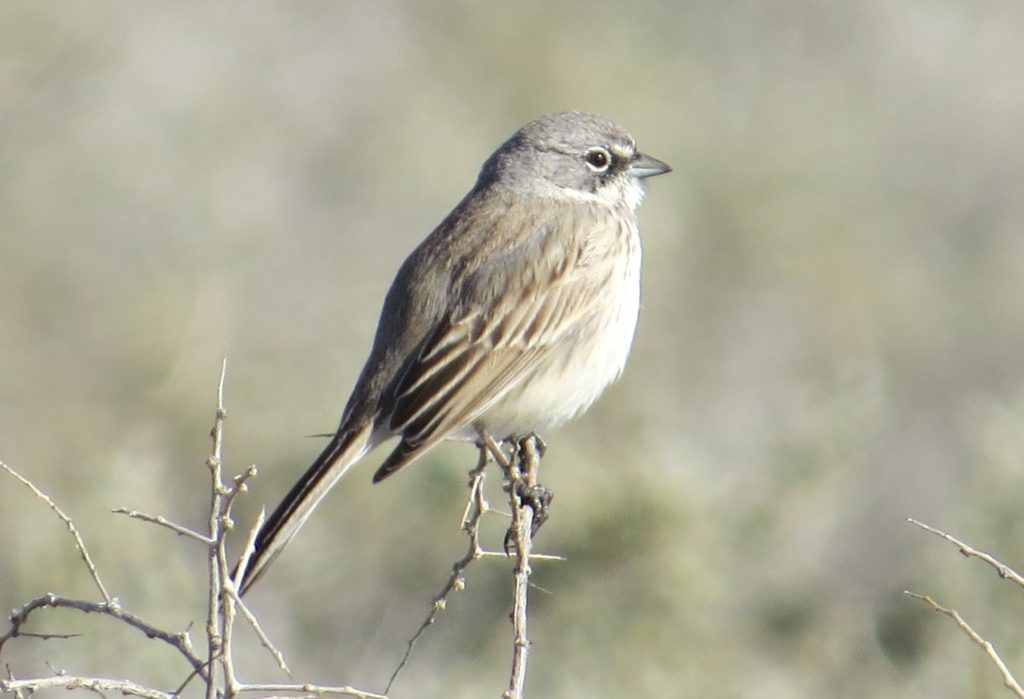 Tommy was able to spy the more rare doppelganger Bell’s Sparrow to make my fourth lifer of five for the morning.  The Bell’s is told apart from the Sagebrush Sparrow by its bolder, thicker malar stripe and its unstreaked back. 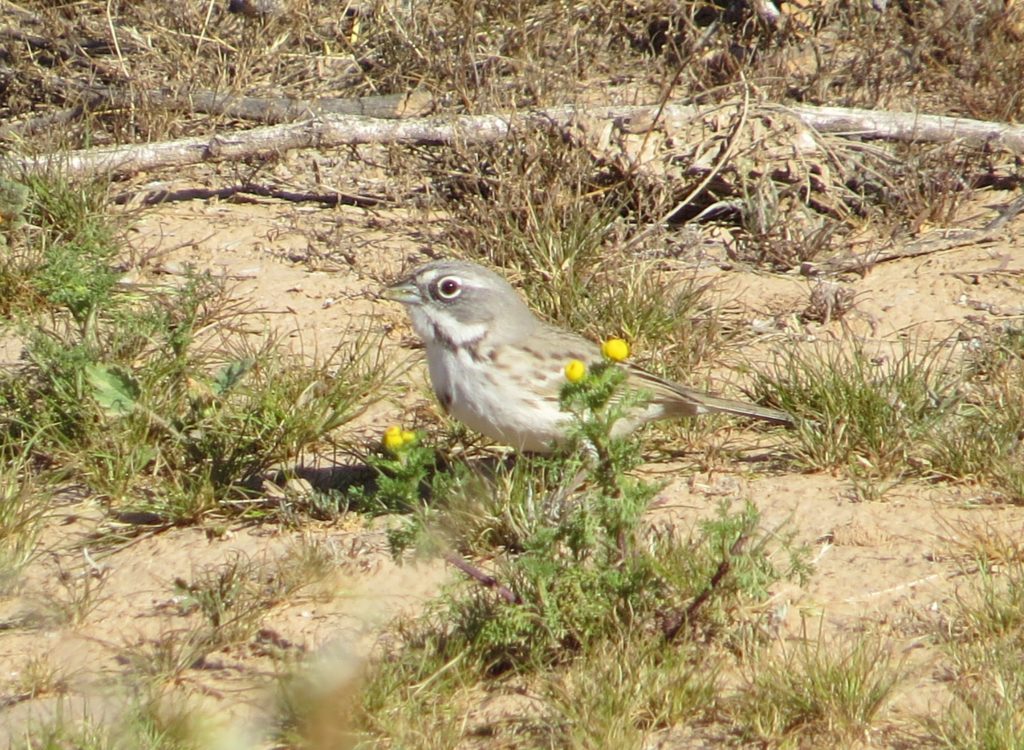 Despite our best efforts and lots more walking, we could not rustle up a Crissal Thrasher. It was time to head out and leave the Thrasher Spot behind. It had been a satisfying experience.  On the way home there were a couple more pitstops. Gordon knew just where to go to get me a Common Ground-Dove lifer at a large stand of overgrown palm trees. 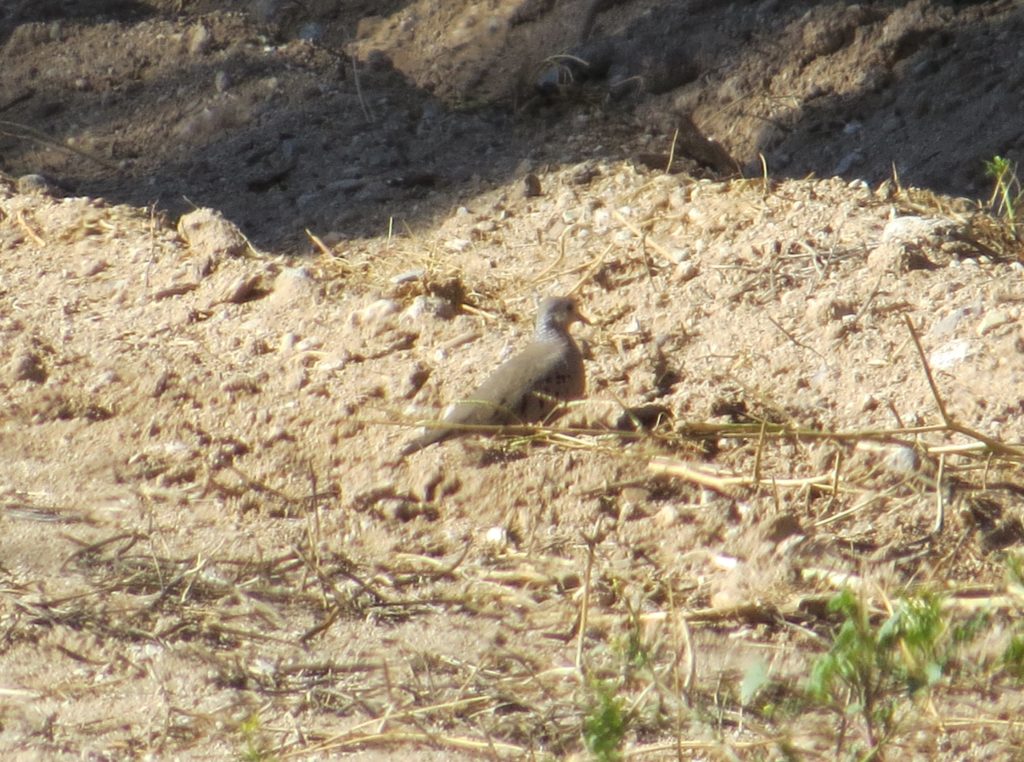 I repaid Gordon by spotting a raptor flying over us. I casually asked the guys what it was since they were making an eBird checklist.  Turns out it was a Crested Caracara, a county bird for Gordon and only the second one Tommy has seen in Maricopa County.

Our next and final stop was a dead end road that was great for all kinds of birds, including the occasional Burrower (my Maricopa BUOW). 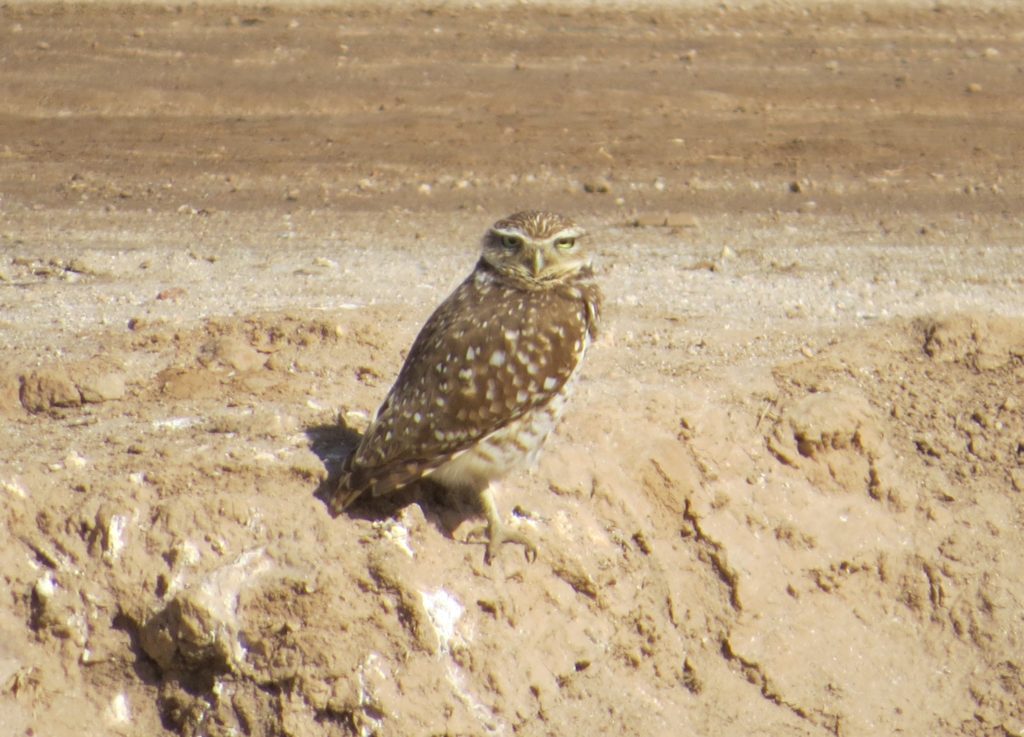 At the end of the dead end road, Tomy finally heard it–a Crissal Thrasher. Unfortunately no views were had of the true curve-billed Thrasher. So it goes. It’s hard to have any misgivings or least find anyone sympathetic whining about not seeing a CRTH when the birding had been sooo good. What’s next, Arizona?  After 123 life birds in eight trips, I seriously have no idea and no plans.