The combination of the recent insurgence of shorebirds and the beginning of my summer vacation meant one thing – I had to go on a tour-de-ponds on Wednesday, hitting up the wastewater treatment ponds of three small towns in Kandiyohi County. (Tour-de-ponds/Turdy ponds – get it?) Evan still has school, so Marin and I dropped him off and embarked on our adventure.  To keep it interesting for her, she was promised it’d be a tour-de-parks also where we’d stop at each town’s park to break up the trip.

Pennock was up first on the list. To get to the ponds, I had to drive south along a gravel trail for well over a half mile.  I stopped to check out a Horned Lark.  That was my second mistake.  The first mistake was driving a mini-van, but I’ll get to that later.  The berm surrounding the ponds was perpendicular to this road and directly in front of me.  So I had to turn east to drive along the berm until I reached the corner and had to go south again.  Why I am boring you with all this direction nonsense?  Well, the berm surrounding these sewage ponds is tall.   It’s so tall that you can’t see the ponds from your vehicle.  You either have to get on top of your vehicle or cross the barb wire fence that is posted every hundred yards with ‘No Trespassing Signs’.  Every single sewage pond I have been to has a fence around it with ominous warnings.  To a birder it’s very frustrating.  It’s kind of like this brand new slide Marin and I found that appeared functional and safe and yet was roped off until who knows when.  “Here is something really fun kids and super safe, but back off!” 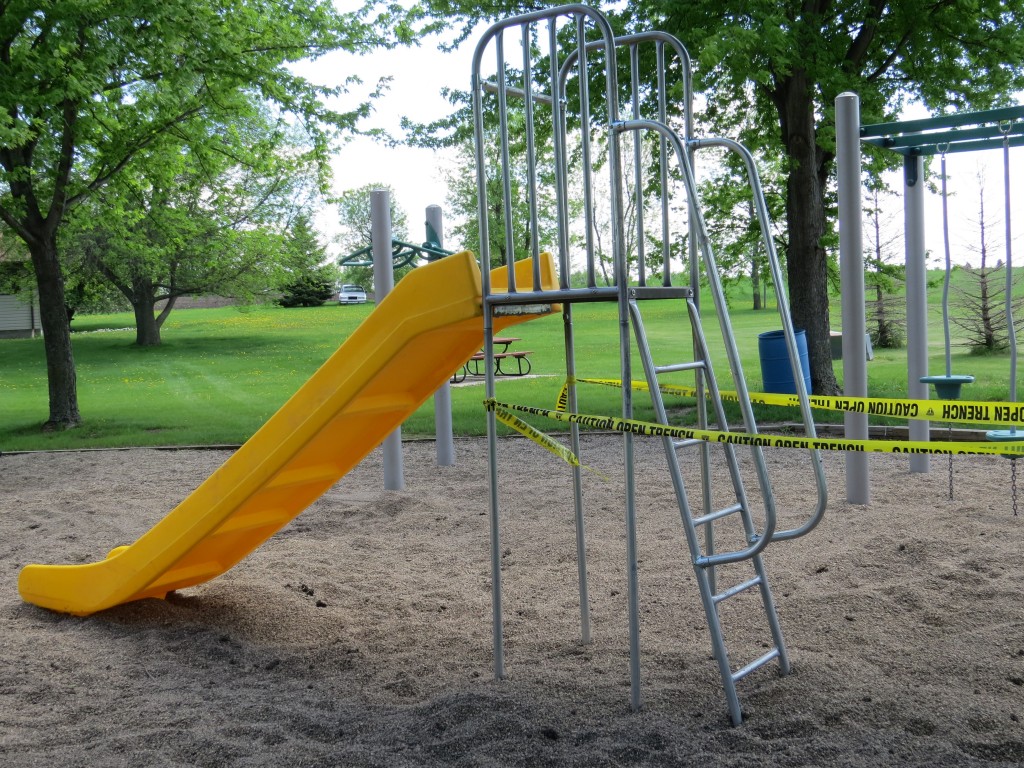 But I digress. I was driving around the ponds looking for any place where I might catch an easy glimpse of the water.  Finally I stopped right by one of those pesky ‘No Trespassing’ signs. I thought to myself, ‘Come on, it’s Pennock, the middle of nowhere. No one’s gonna see me.’  I put the van in park and was about to open my door when I saw my rearview mirror was lit up with the blue and red flashing lights of a Kandiyohi County Sheriff’s squad car five feet off my rear bumper!  Whoa, I had no idea how long he’d been in “hot-pursuit” of me since we were both a mile from the highway and I was driving all of 5 MPH the whole time.

A thousand thoughts raced through my head.  Do I pull over? How do I pull over when I’m on a dirt path? Maybe I should just hop out and explain I’m just birding. Maybe I should grab my binoculars and show them so they can see that. No! Don’t hop out, are you stupid?!  Binoculars? Are you nuts? Do you want to commit suicide by cop by jumping out with binoculars? It was terrifying, confusing, and even a little exhilarating. Finally a cooler head and many years of watching COPS prevailed – I stayed in my vehicle, rolled down the window, and shut off the engine. I decided to rest my arm on the door frame of the van.  I know, he’ll see my wedding ring and know the mini-van is legit and this will all be one big misunderstanding.

After what felt like an eternity, the driver’s door of the squad car opened and the deputy began making his way to my window.  His walk was slow as he hugged the inside edge of my car keeping one hand on his holster – no joke.  I could tell he looked tense.  It had to be the suspicious mini-van, my first mistake.  No one goes to a sewage pond in a mini-van.  Had I driven a truck or my SUV and wore a seed cap, those officers wouldn’t have thought twice about me being out here.  Finally the officer made it to just behind my window as they are trained to do when approaching potentially criminal birders in suspicious mini-vans at sewage ponds.

“What are you doing here today?”

Immediately the tension on his face broke as he burst into a smile and repeated, “Birding.” Any visions he had of a show-down at the Pennock Sewage Ponds must have vanished with my response.  I, too, felt more relaxed, thinking that he would leave me alone now.

“We’ve had some reports of people messing with things here, so when we saw you parked we came to check it out (my second mistake of looking at the lark). We’ll have you on your way shortly, but I need to see your license and insurance card.”  So apparently this constituted a traffic stop even though I was doing nothing wrong and technically wasn’t pulled over.  Back to feeling like a criminal.

So I waited and waited.  Finally I got my license back.  “There you go, Josh. Have a nice day.”  Hey, he used my name – I feel exonerated.  So I watched him go in reverse down the dirt trail.  I was waiting for him to leave so I could resume birding, but once he got to the corner of the ponds, he just stayed and watched me.  I got out with binoculars and camera and went to a low spot in the berm where I could look over.  Any thoughts of fence-hopping were completely gone. As I watched birds, he watched me and watched me and watched me.  Back to feeling like a criminal.  Finally I decided I’d had enough and got in the van.  I, too, drove in reverse down the path which finally got him to move along.  (How many traffic stops conclude with both officer and perpetrator going in reverse for a hundred yards?) When I got to the corner and could turn around to go forward, I was shocked to see a second patrol car with two more officers!  Should I feel intimidated or honored that this birder required back-up?

Once I got back home I shared my anecdote with my birding buddies.  One of them fessed up that he’d hopped that fence the night before.  Aha!  Another told me he’s been questioned by law enforcement three times in the name of birding, and then he proceeded to welcome me to the brotherhood.  It actually was on my list of birding accomplishments/expectations.  Put other birders onto a rare bird? Check. Find a county record? Check. Check. Check. Get stopped by police while birding? Check.  I guess I’m now a bona fide birder.

It’s silly, really, how a mini-van, a lark, and a fence-hopping friend can all put you in bad light.  I wasn’t speeding, making an illegal u-turn, nearly causing an accident, checking email while driving, or trespassing.  And as to whether I’ve done any of those things in an effort to see a bird, I plead the fifth.

My birding mood was killed for a little bit, but after a recovery period at home I decided to get back on with the tour.  It turns out that there would be more surpises in store for this day.  That’s what I love about birding – you just never know what’s going to happen.  And the cop stop is all part of the fabric of expecting the unexpected.

While I was letting Marin play at Atwater’s Centennial Park, I ran into a former student who’s now in college and was babysitting some kids at the park.  After catching up a bit, she asked me if I was the one that was into owls.  I told her that I enjoy them, yes.  Then she said that there’s one in the park right on the ground down near the lake.  What?!

So we all marched down there, with like a zillion kids in tow.  She told me that it was in the middle of a huge Cottonwood tree and to see it you would have to walk to the shore, turn, and it would be five feet in front of you.  So I followed her instructions and saw this guy! It was a Great Horned owlet. 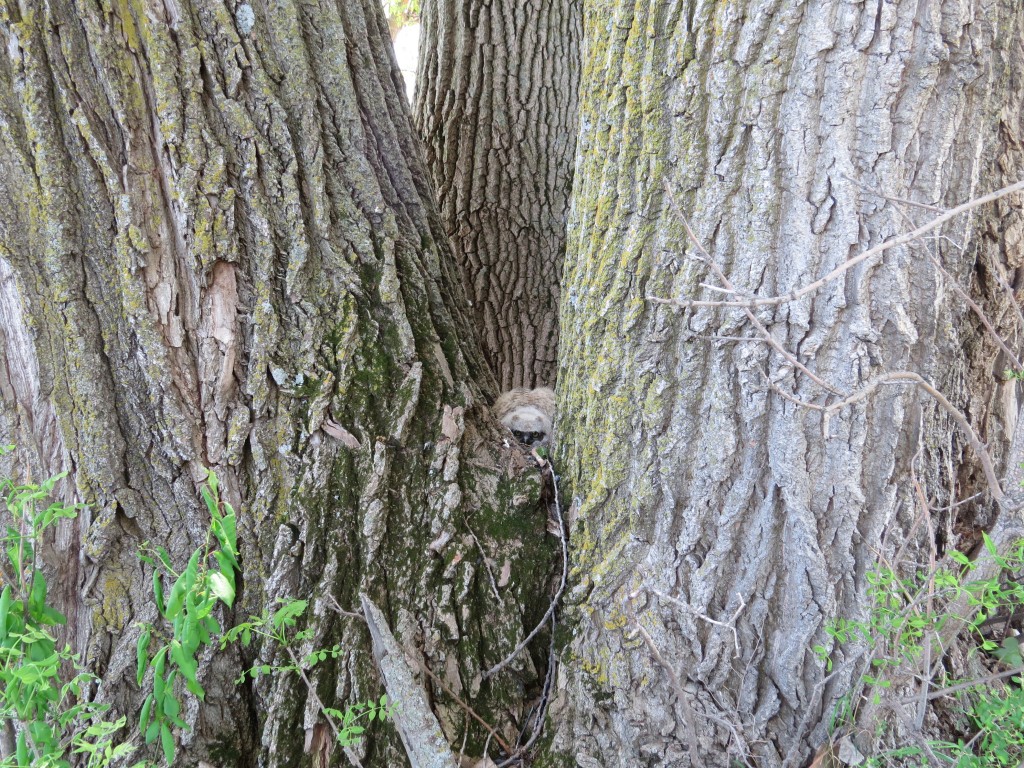 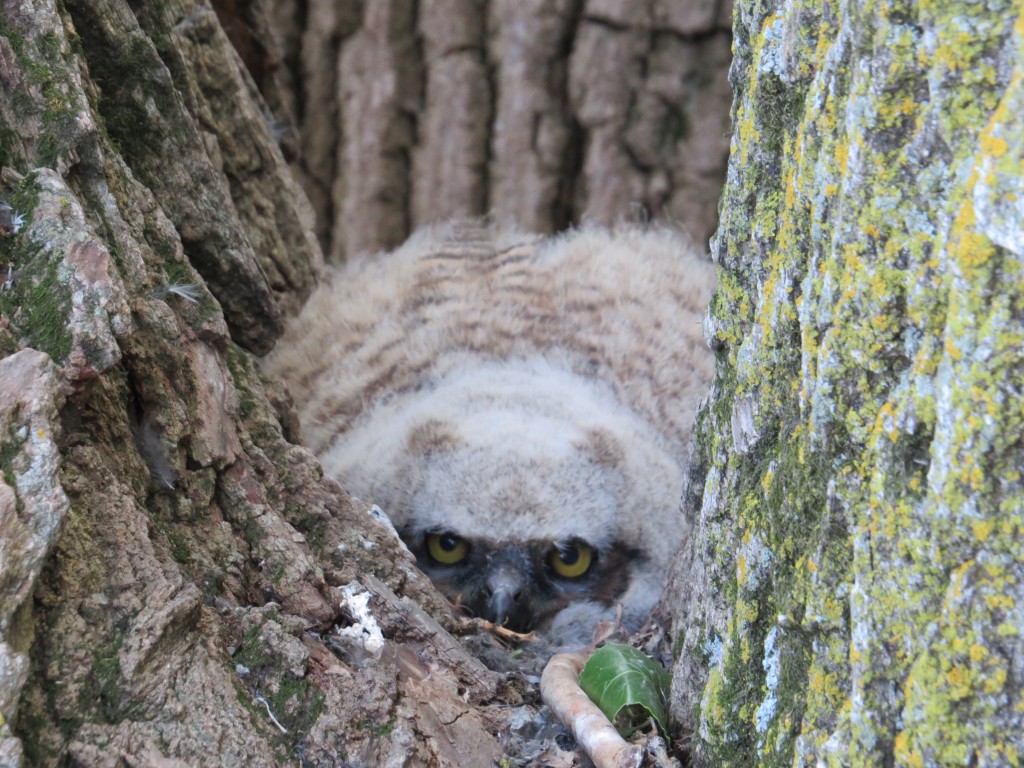 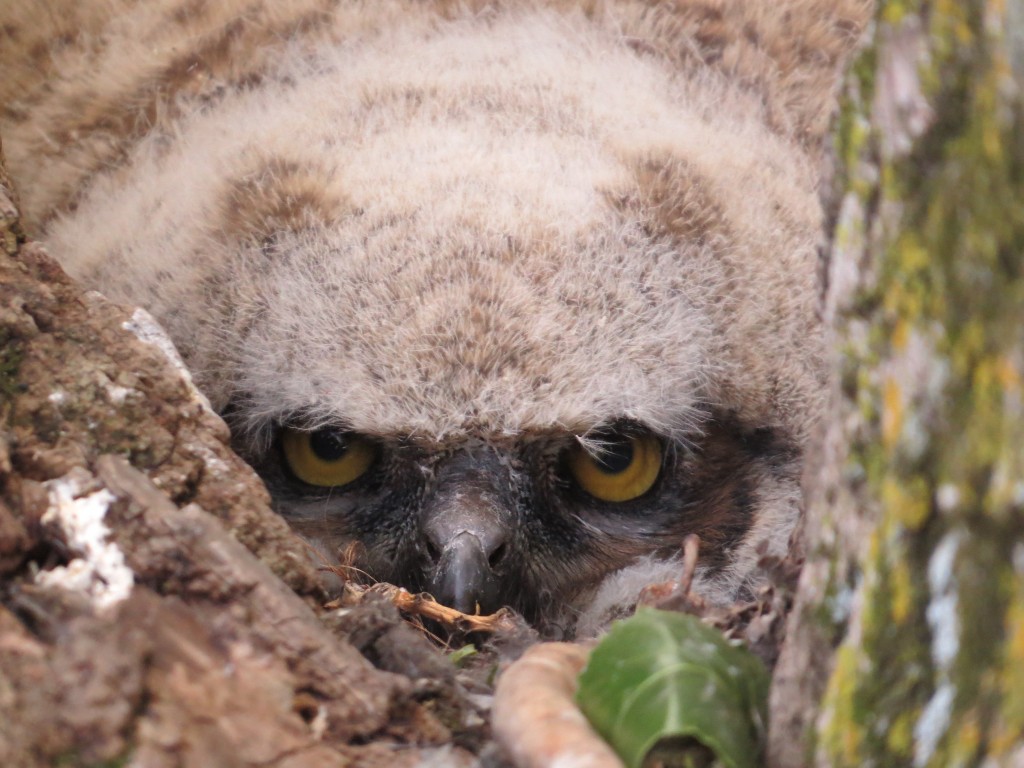 Poor thing.  Every kid in town knew about this guy, especially with cell phone pics running rampant through social media.  Making it worse is that you have to be within a few feet of the bird to see it. I heard one kid had been throwing sticks at it.  Now where are those Kandiyohi County Sheriff’s deputies when you need them? I looked all over the massive tree above to find the owlet’s mom or dad, but I had no luck.  I checked back on it the following day, and it was gone.  I’m not sure how it left but was glad to see it out of such a public spot.

One of the last parks we went to was in the city of Lake Lillian.  Now this was a good old fashioned park with splintery wooden teeter-totters (the kind where you could roll off when your end was on the ground, dropping your buddy on the other end like a rock) and huge metal slides that must reach at least 350°.  Here’s my super cute, recent four-eyes trying to cool it down. 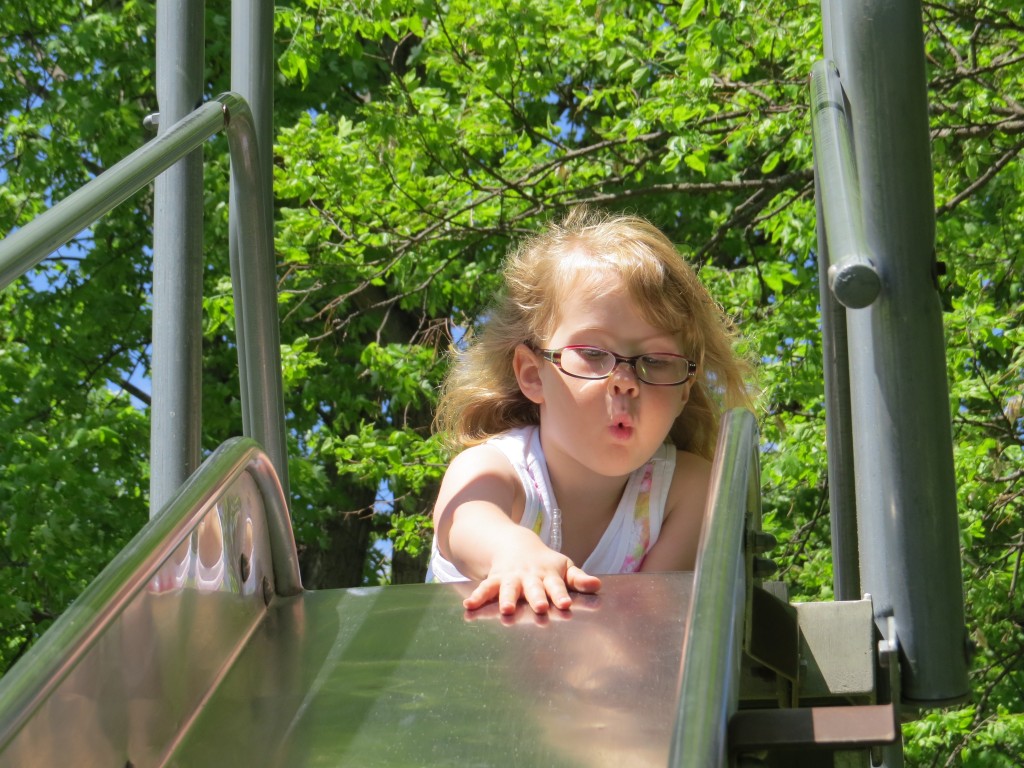 Not a safe park and no caution tape or razor-wire fence keeping us out.  It just didn’t fit the profile of the day. 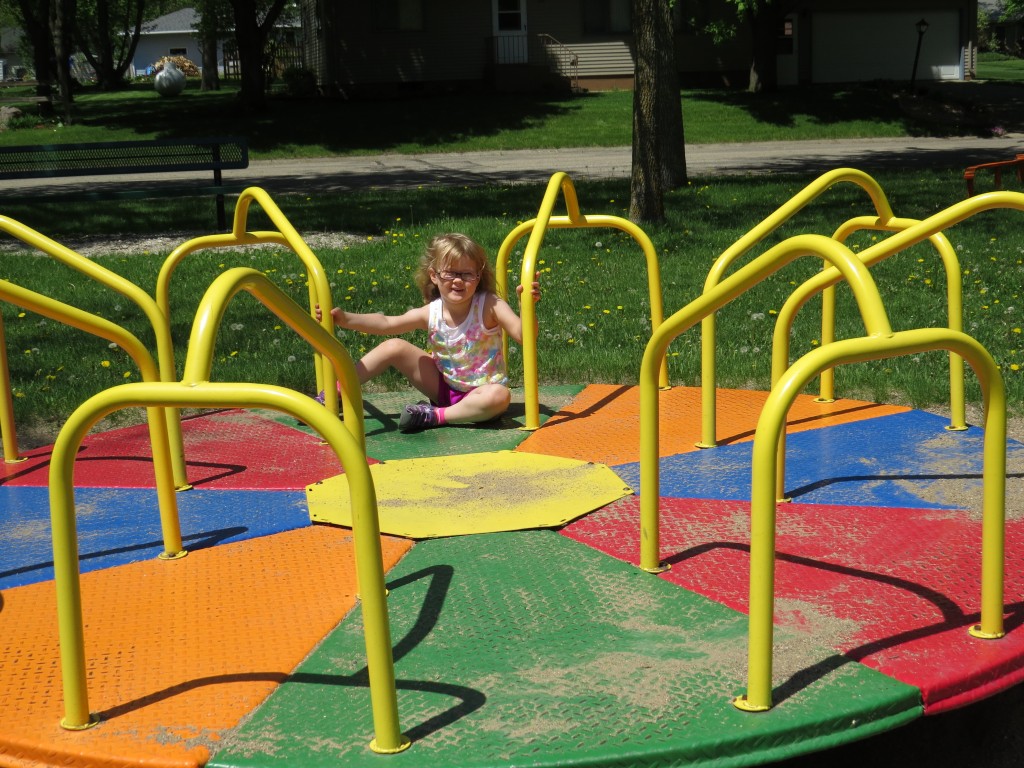 As Marin enjoyed the dangerous park, my ear caught the summer sound of an Eastern Wood Pewee.  It didn’t take long to find it. 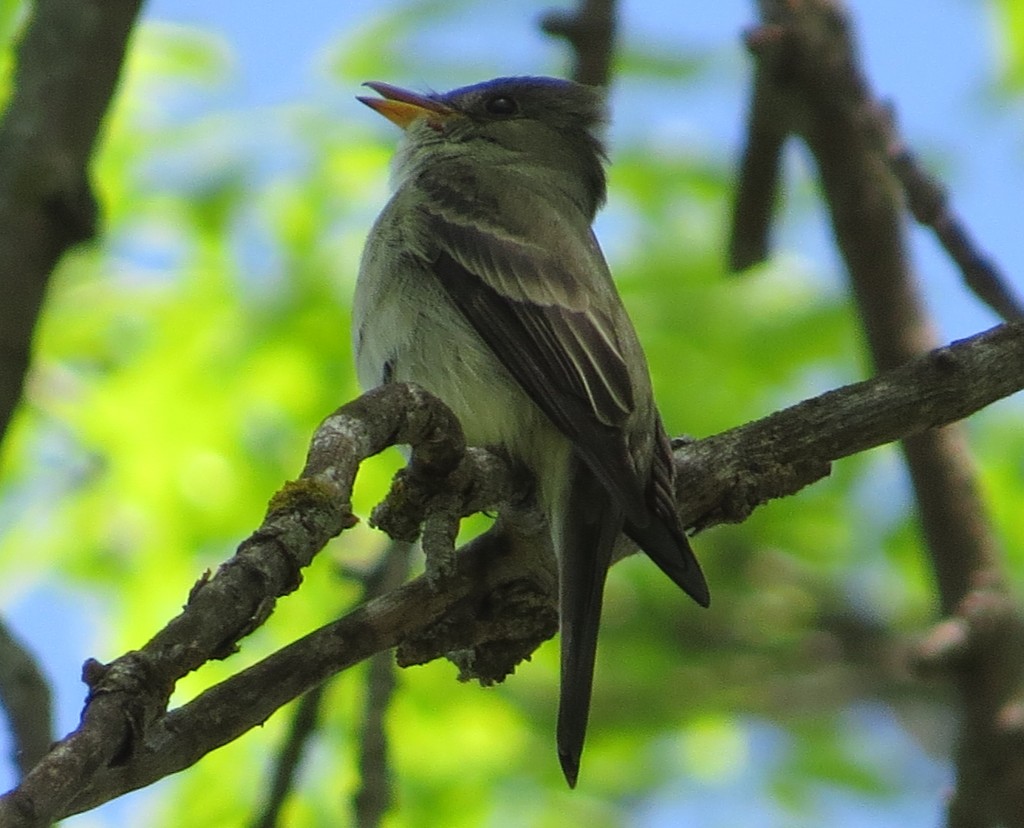 Later on I nearly had my second heart attack of the day when I was sitting on a park bench watching Marin.  A dove landed two feet away from me on the ground.  It took me a bit to take in what I was seeing – tiny dove, scaled back.  Then it hit me – it was the Inca Dove, a southwestern specialty we had seen in Arizona!  Stupidly my camera was in the van at this point.  I froze and couldn’t even get my phone out for a picture.  Finally the dove flew.  Noting where it landed, I dashed to get my camera and come back.  If it were an Inca Dove, no one would believe me without proof.  It took me a half hour to relocate it, but I finally found it in a tree.  It turns out it was a juvenile Mourning Dove, which seems oddly early.  Rats. 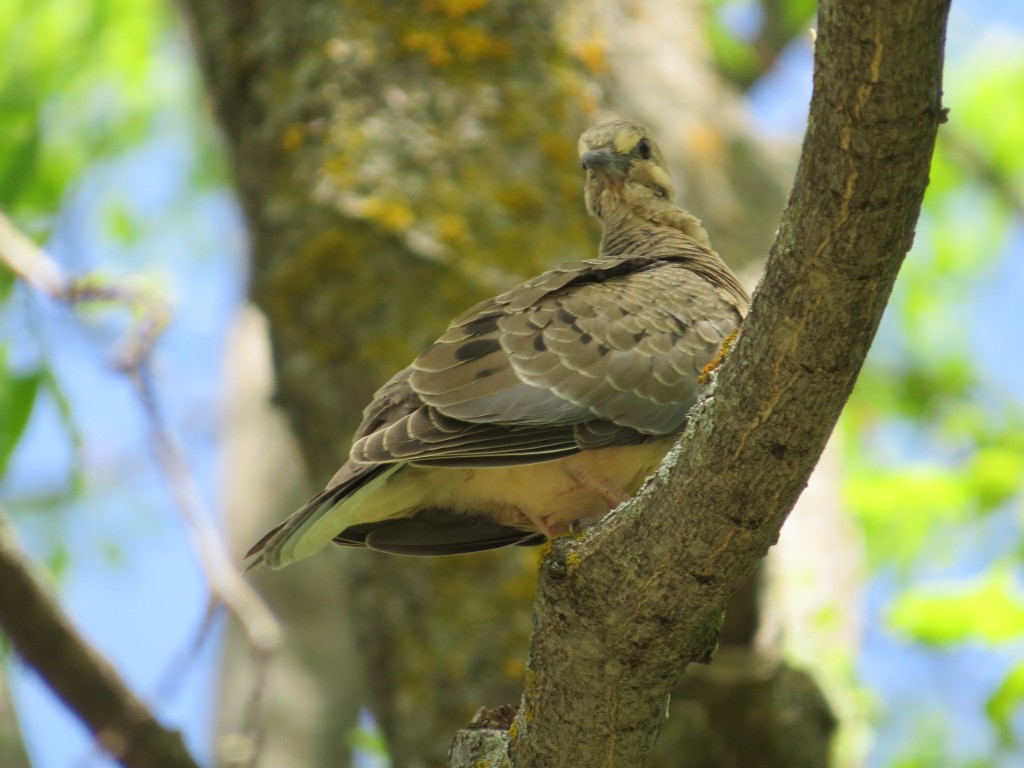 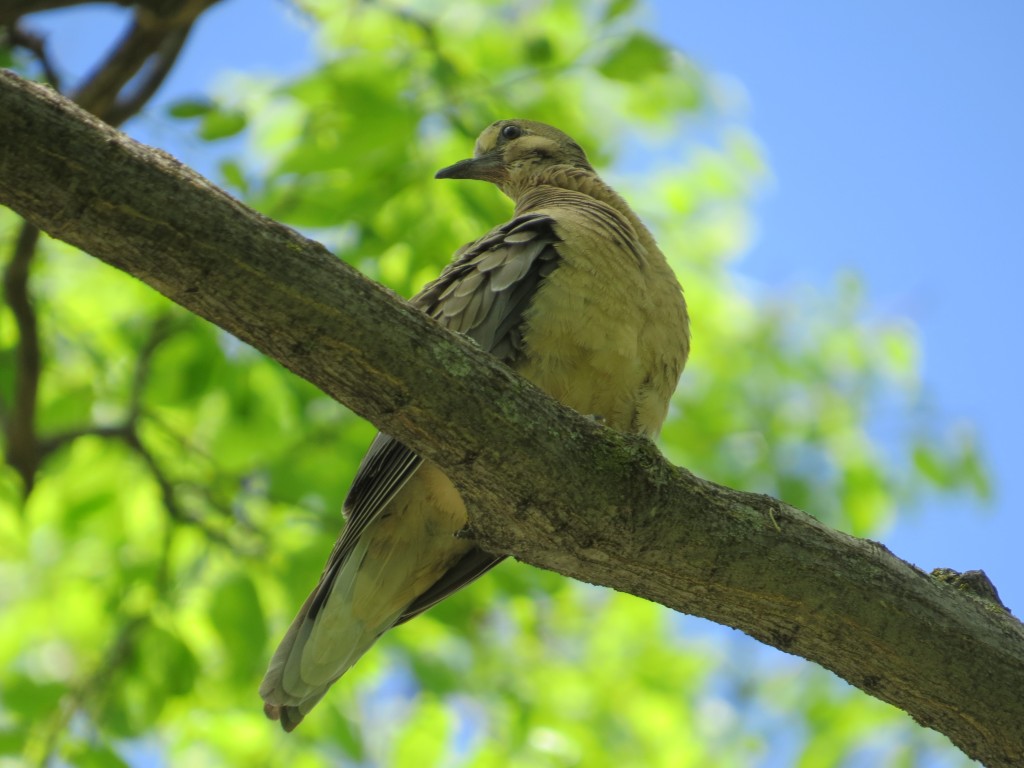 It was interesting to read in the field guide that these juveniles are commonly mistaken for Inca Doves.  It was fun, nonetheless, to have this little learning experience, but I could have done without that second adrenaline rush of the day.  Whoever said birdwatching was a lame activity for old people?