Most birders in this country dream of eventually hitting the Big 4: Florida, Texas, Arizona, and California. Each of these states offers its own unique collection of birds in addition to just a general abundance of birds.  A birder can skip visiting many states but must hit these at some point if they want to fill out their collection of North American birds.  I have tapped Arizona repeatedly over the years but still hadn’t made it to the other three since I’ve become a birder.  Needless to say, I was getting antsy to get another “mega” birding state under my belt.  This summer it finally happened as we took a family vacation to San Francisco.  Even though it wasn’t an exclusive birding trip, I knew my life list would be given a nice boost.  I was excited.  Heck, I couldn’t even wait to see a Western Gull–the first official lifer and arguably most abundant bird of the trip.  Western Gulls were a constant presence around San Francisco’s Fisherman’s Wharf. 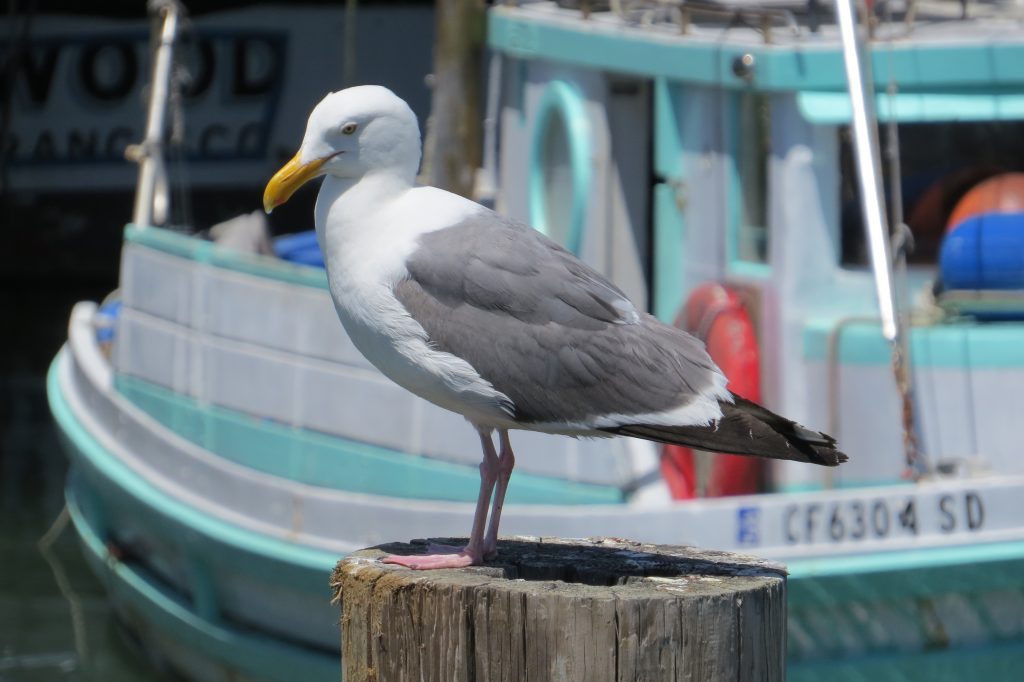 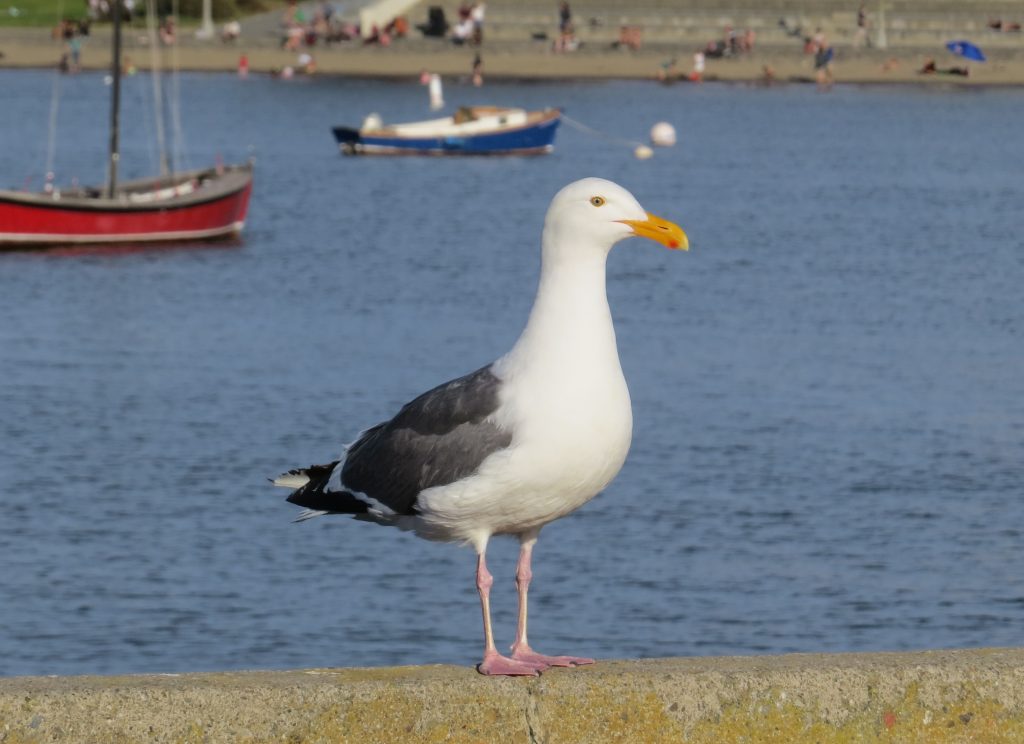 As a newbie Cali birder, I eagerly scanned the Bay when we first arrived at the waterfront, looking for absolutely anything new and different.  Though not a new bird, I was pleasantly surprised to see a Red-throated Loon loafing about San Francisco Aquatic Park. 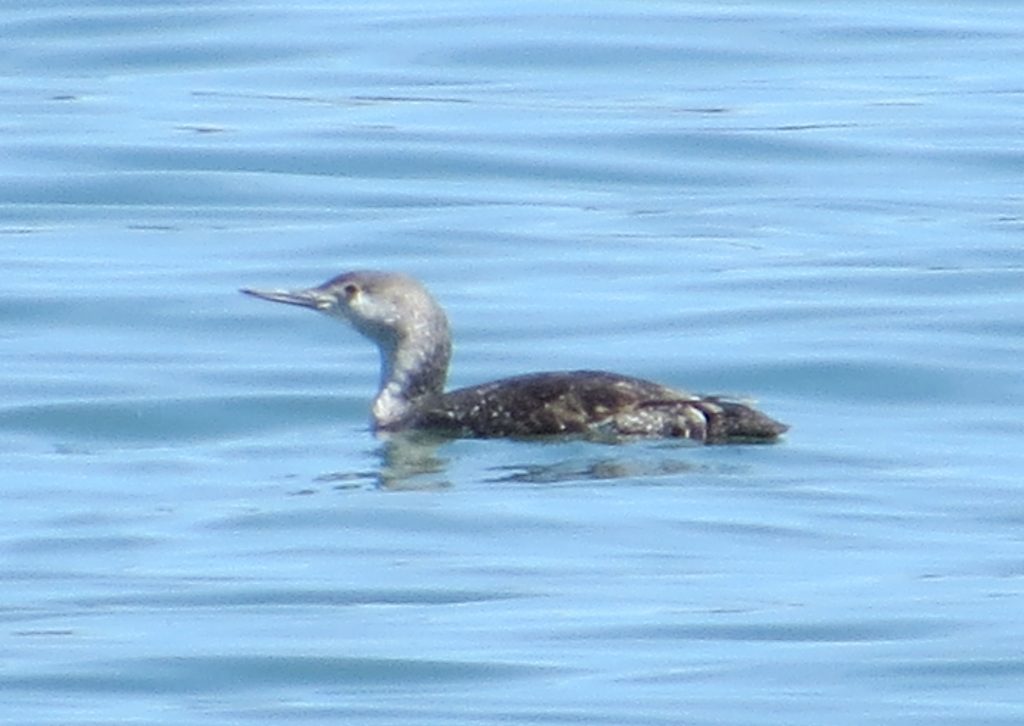 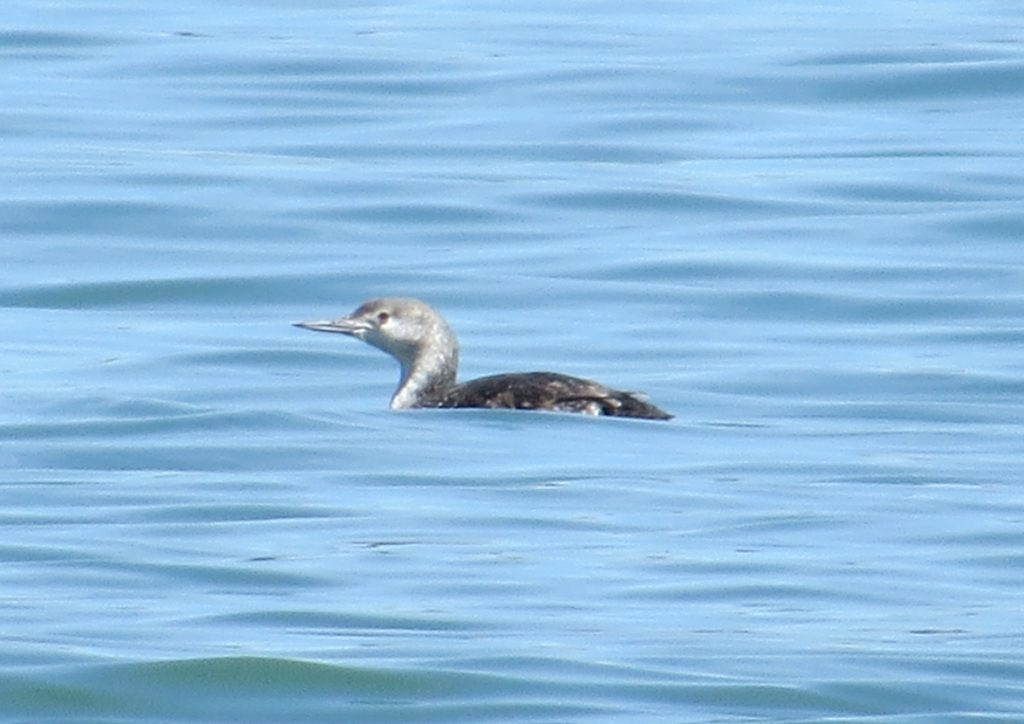 I was equally surprised to pick up this long overdue Clark’s Grebe lifer. 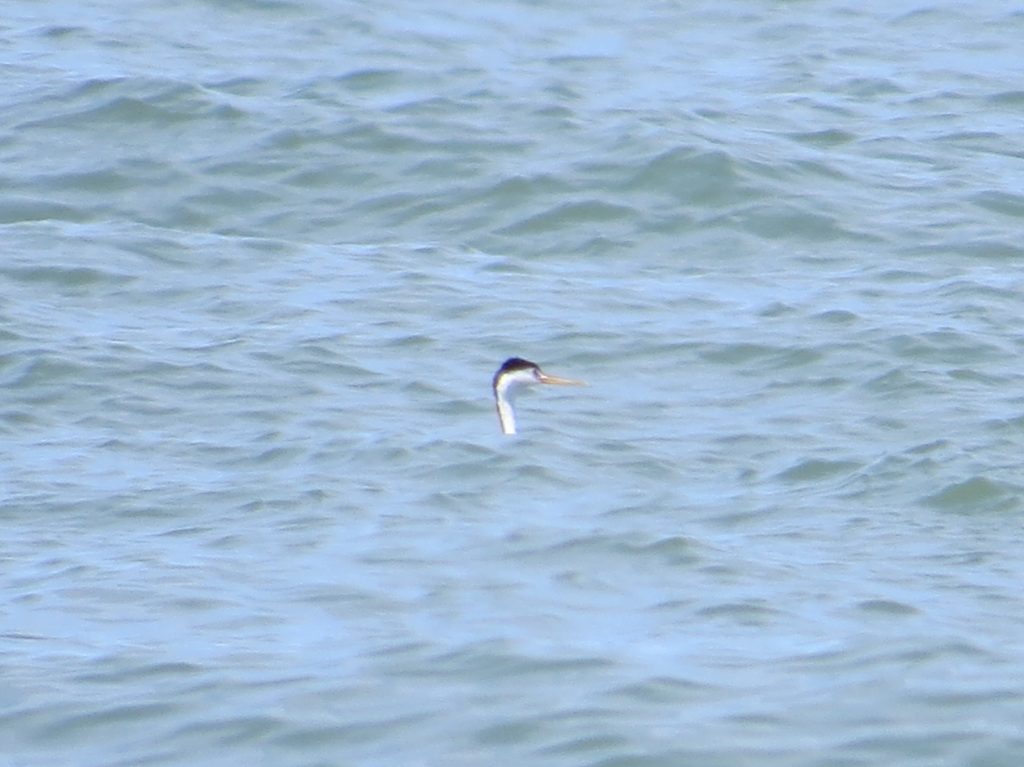 The next day of our trip was Alcatraz day–a bucket-list item for Melissa. I was excited to experience the Rock myself, but the ferry ride over to the island would be my first “pelagic” of sorts so my mind was more on the potential lifers. Taking Steve Gardner’s advice, I was sure to grab a spot at the front of the boat to be in position to see anything that might be moving out of the way of the boat. We had barely left the dock when the strategy already paid off with some handsome Pigeon Guillemot lifers.  This was an expected species that was still exciting to see nonetheless. 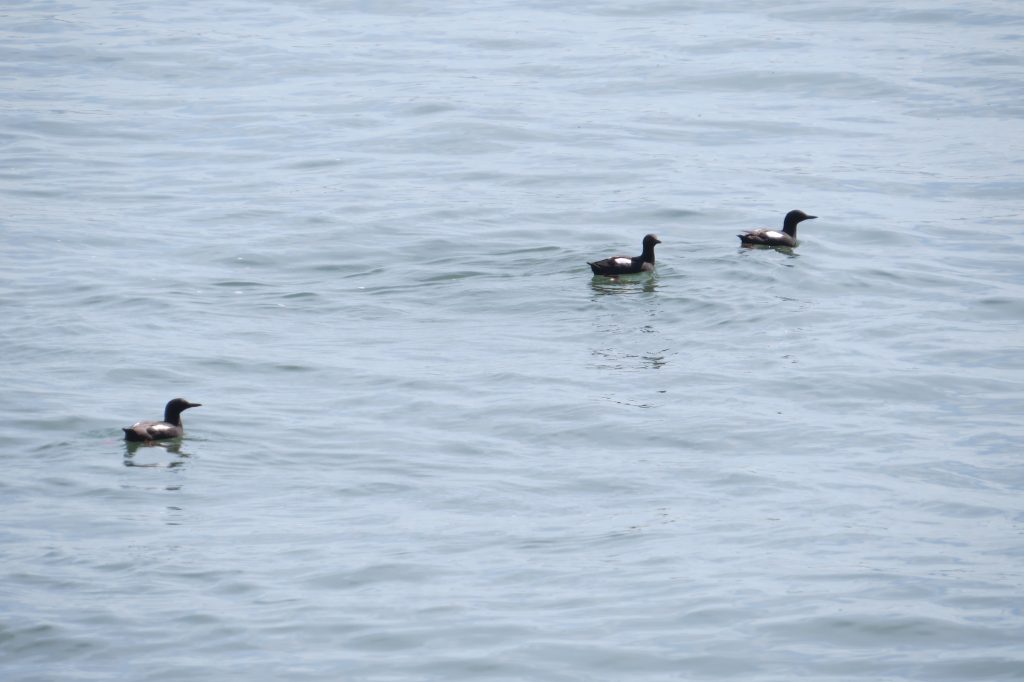 I wondered what other goodies we might encounter in the Bay on the 1.5 mile boat trip to Alcatraz. 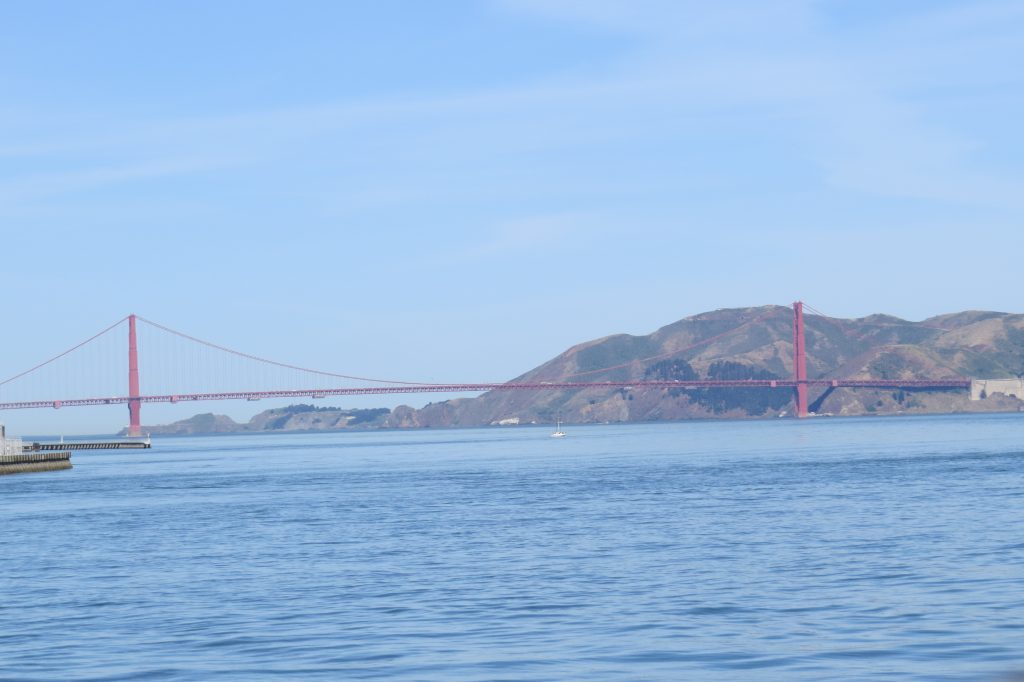 The Rock looms large, though, and commands your attention itself regardless of what birds may be on or near it. 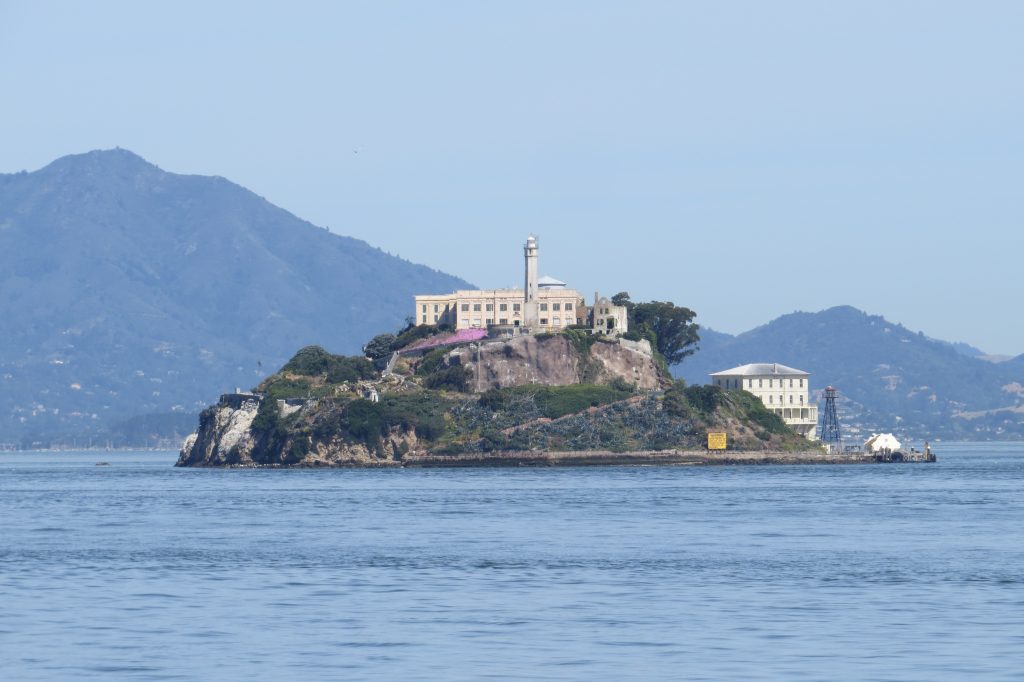 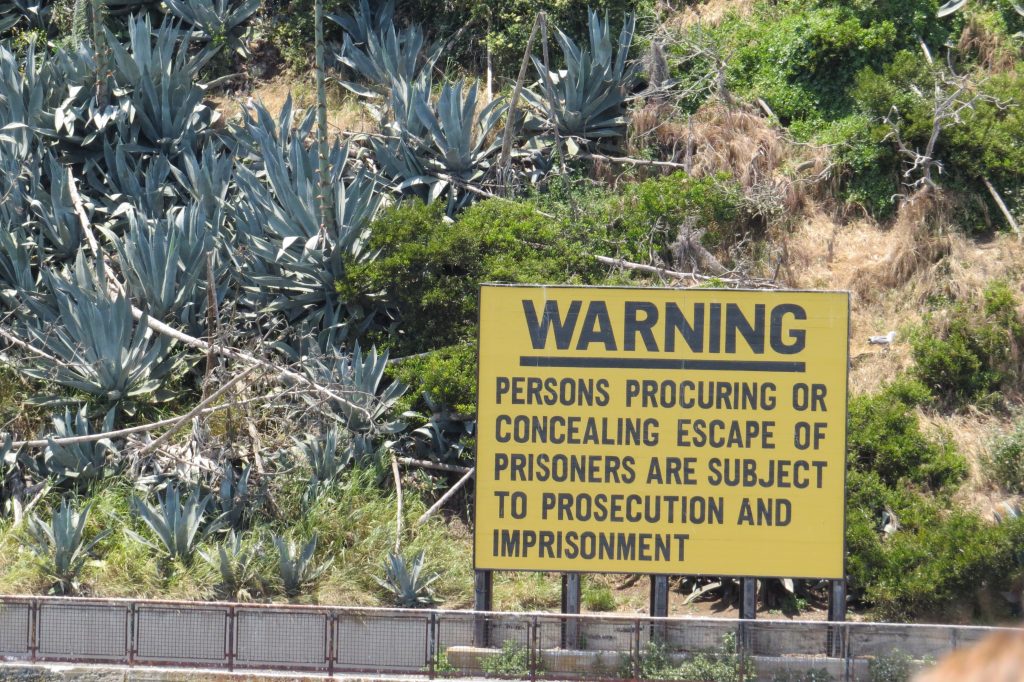 As we waited to disembark, Pigeon Guillemots served as a bookend bird for our short boat ride, giving better looks this time at least. 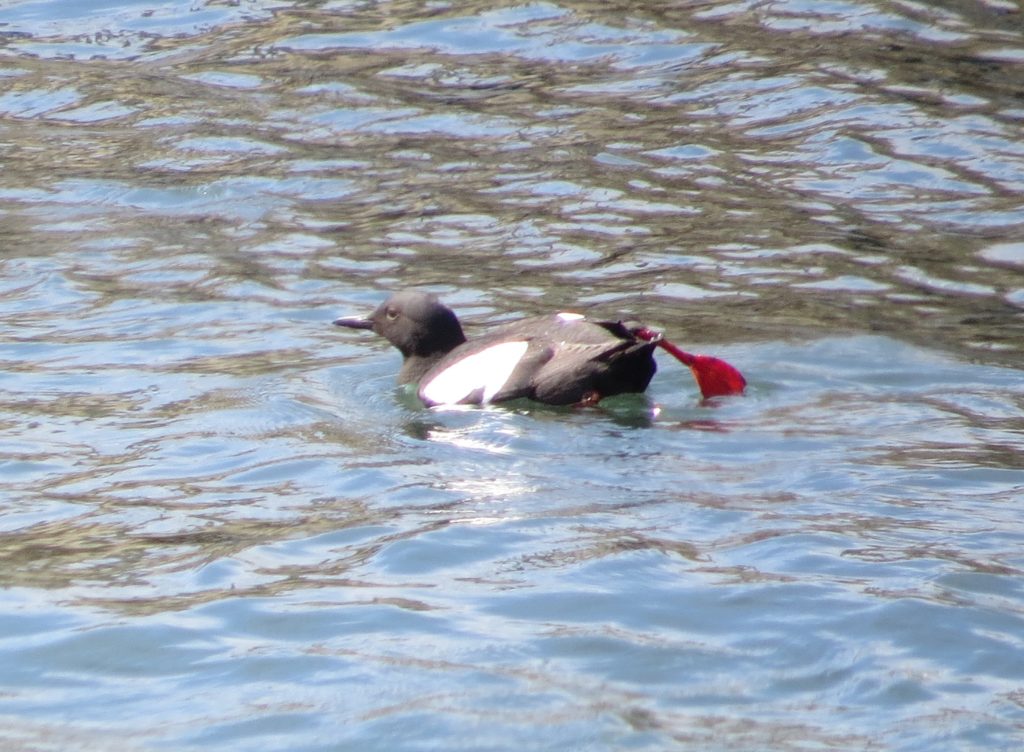 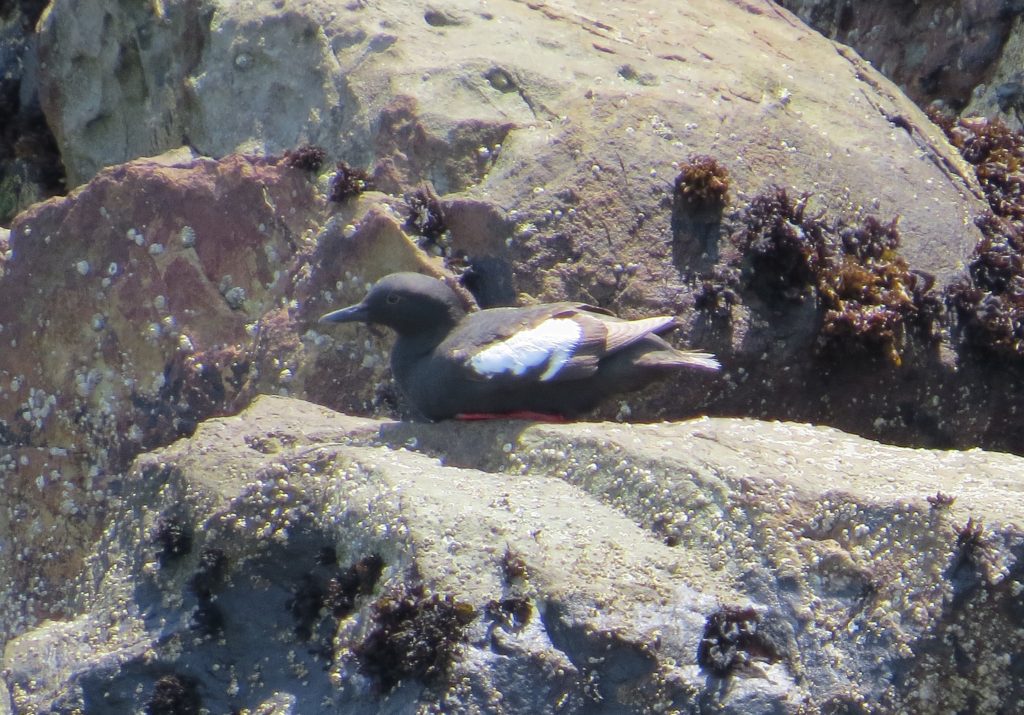 In addition to its fame as a federal prison and an Army post, Alcatraz is an important bird area, as there are huge colonies of nesting birds there.  Western Gulls are one of the main breeders on the island.  Their nests were absolutely everywhere on the island. Mommas and their chicks were a common sight on the steep hillsides as we hiked the switchback road up to the famed cell house for an audio tour (I highly recommend this tour BTW). 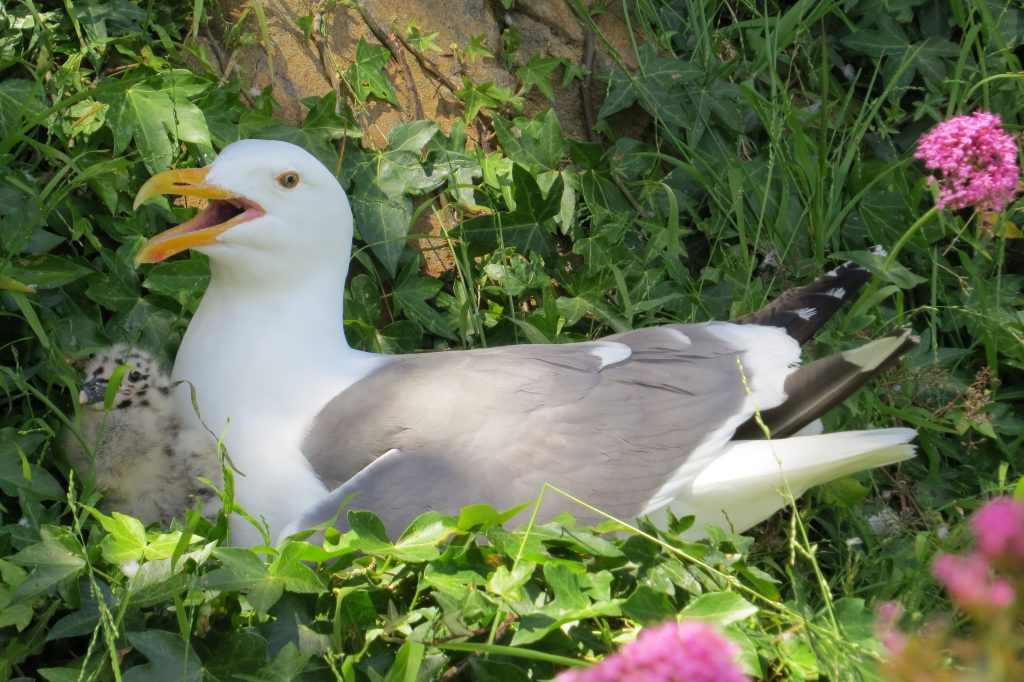 We stopped in an air-conditioned Civil War era building to get some relief from the heat and the climb and to learn something about the island from an informative Discovery Channel video shown on several large screens in the catacombs of this building.  One thing mentioned in the video was how Alcatraz is an important bird area, and the video hilariously portrays a ranger eagerly looking over a rail to show some excited tourists a Canada Goose on the steep slope below.  Life imitates art as they say, and as we continued our hike up to the top after the movie, Evan looked over a rail and said, “Hey, look! A goose!”  We all had a good laugh since he truly did spot a Canada Goose.  And since it was my California CANG, I was mildly excited.

Inherently, Alcatraz is a place of regrets, and I had my own after we toured the cell house. Since I was busy growing my fledgling California bird list, I was trying to identify everything.  I took a photo of this blackbird and just wrote it off as a probable Red-winged Blackbird.  It didn’t even dawn on me to consider the California endemic Tricolored Blackbird and try to see the wings.  What an idiot. 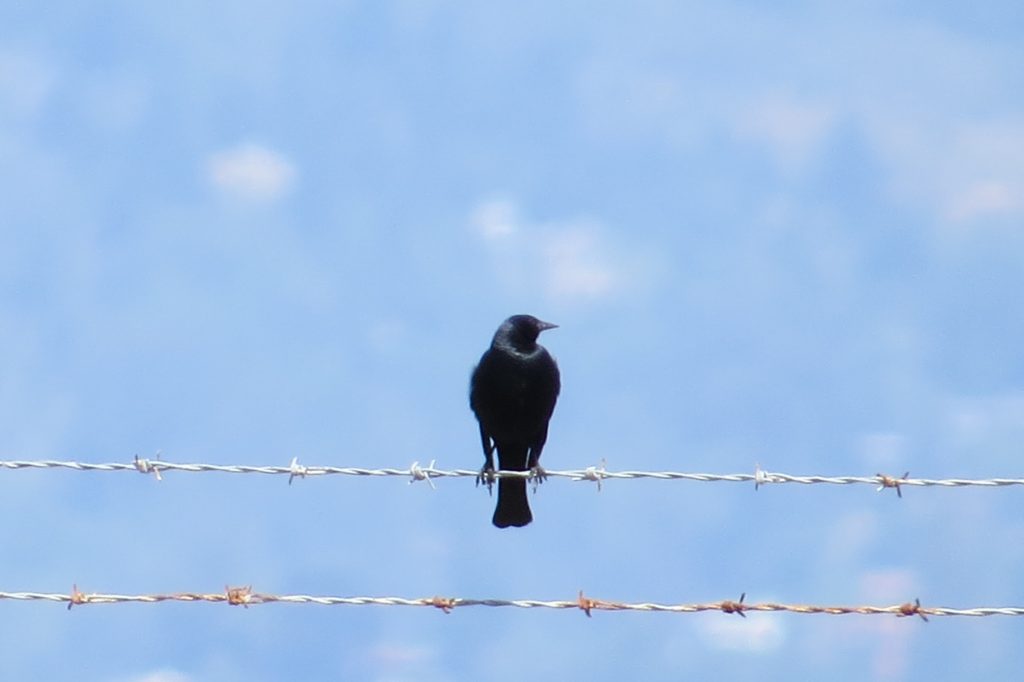 On Alcatraz, Freedom and Tricolored Blackbirds are tantalizingly close but a world a way.

One lifer that was not unexpected at all on Alcatraz was the Brandt’s Cormorant.  They are not too tough to find as they nest on the Rock by the hundreds. 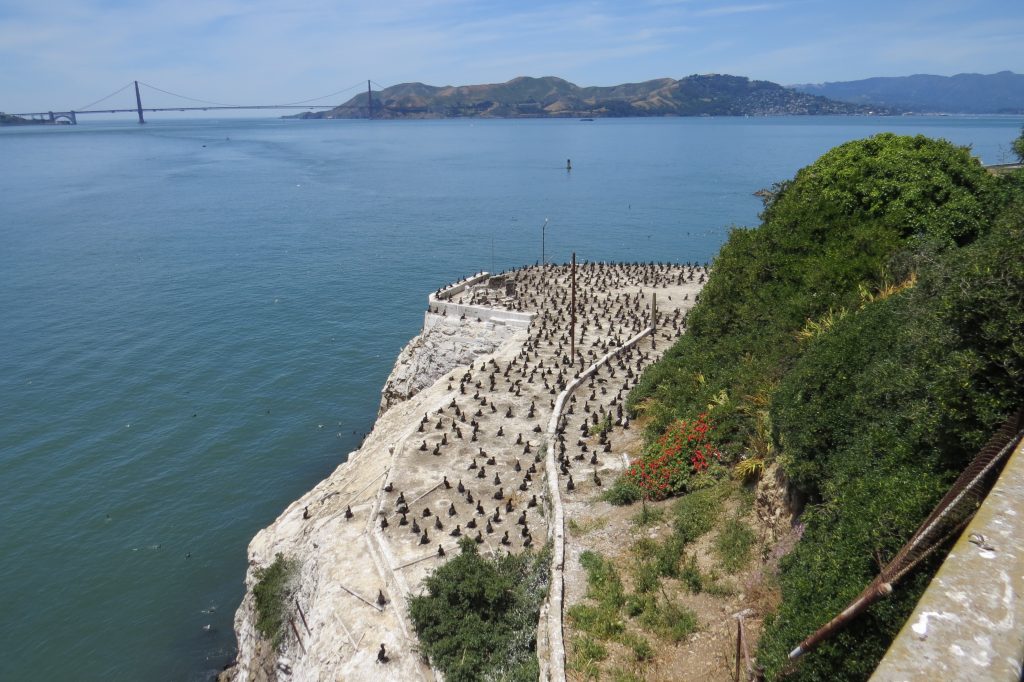 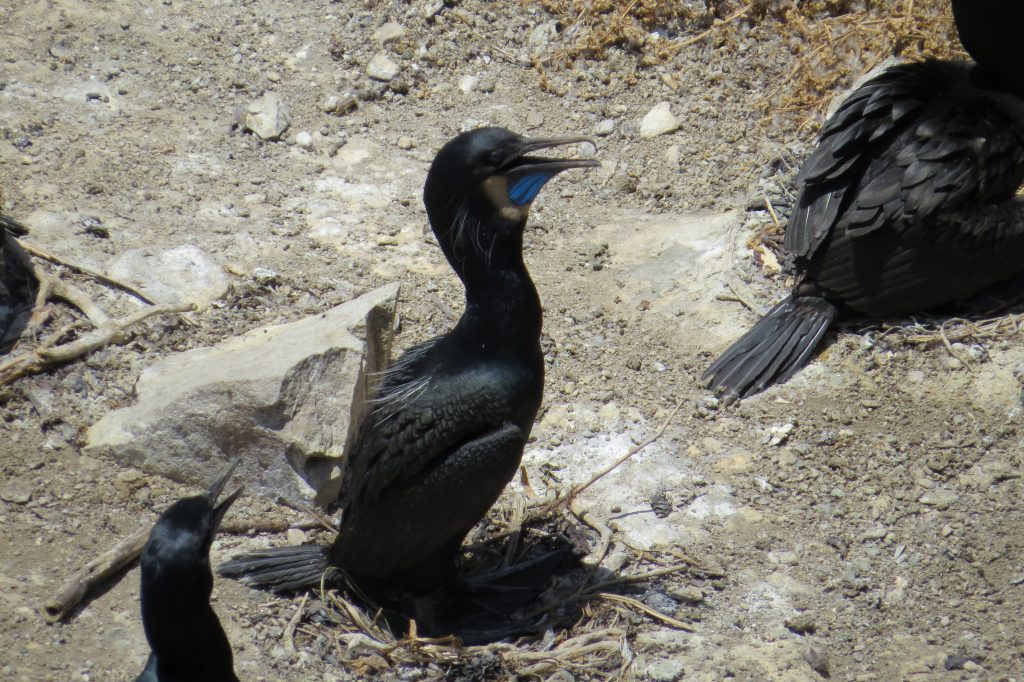 A Pelagic Cormorant or two had been reported among the Brandt’s, but trying to find one was a needle-in-the-haystack exercise, something that was tough to do in the company of non-birders.

Later on in our San Francisco trip, we found ourselves at Ocean Beach.  The Pacific Ocean was new to the kids and me on this trip, so it felt good to get beyond the Bay and experience it properly. 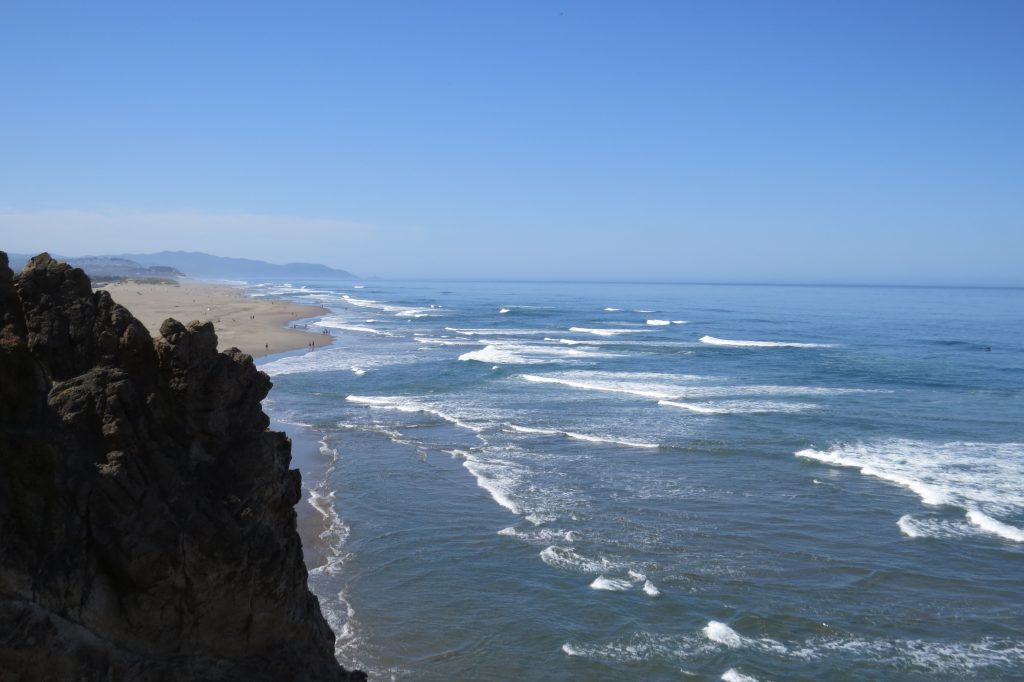 Melissa and the kids ventured down to the beach while I hung out by the famed Cliff House, looking for a pair of reported Black Oystercatchers to no avail.  Eventually I joined the family at the beach and looked for seashells with the kids and a Common Murre lifer for myself.  I was not successful with the latter.  After spending sufficient time at the beach, we stopped for lunch at the Lands End Lookout visitor center.  The Oystercatchers were bugging me.  I knew this was probably my only chance on the trip for this species.  I had to take one more stab at it. While the fam poked around the gift shop, I descened the stairs down to the Suttro Baths to see if I could find these odd, conspicuous birds.  Going down to the Baths did allow me to see my lifer Heerman’s Gulls up close. 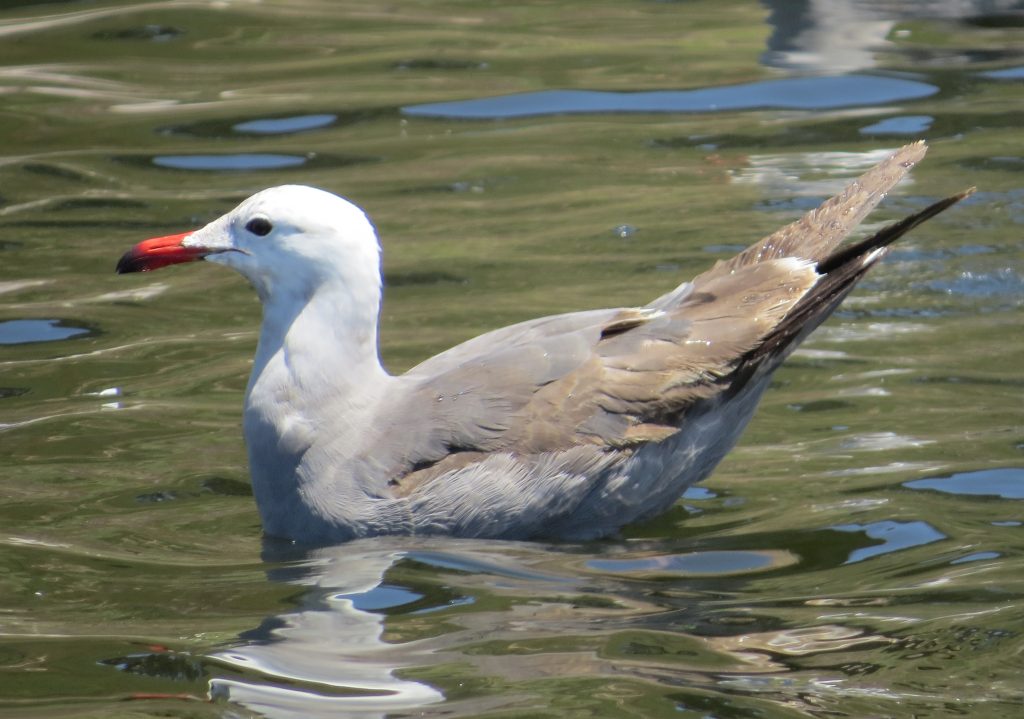 It’s such a good-looking Gull, both the deep sooty-colored juvenile and the adult with that white head and red bill. 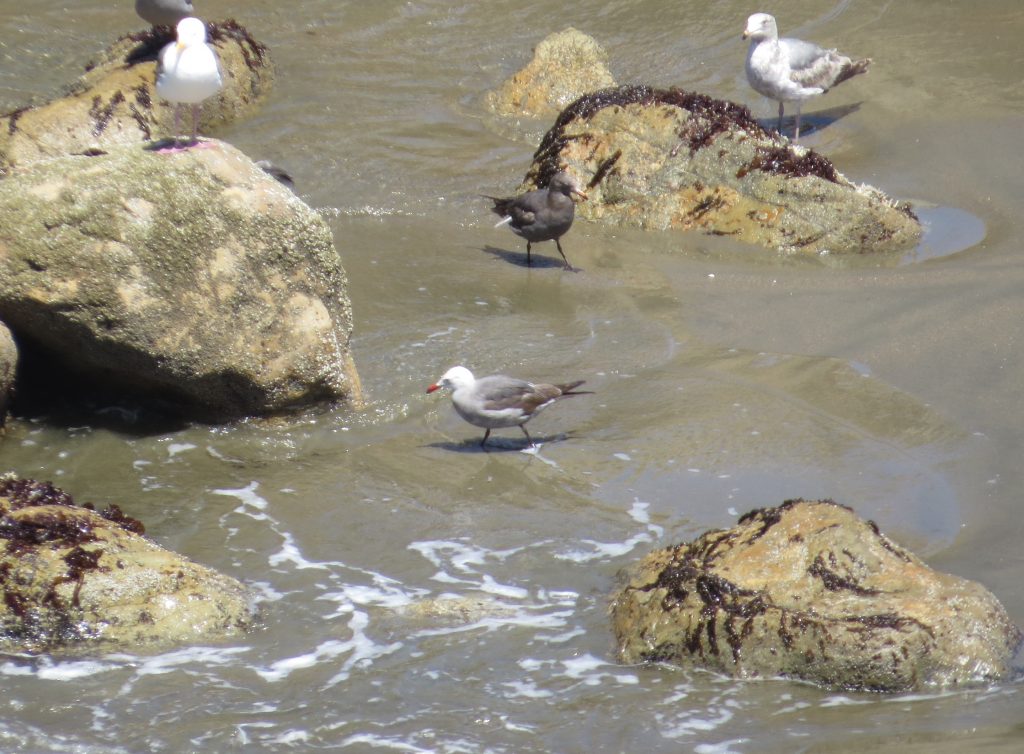 This isn’t the greatest photo, but it captures the awesome color-scheme of this bird. 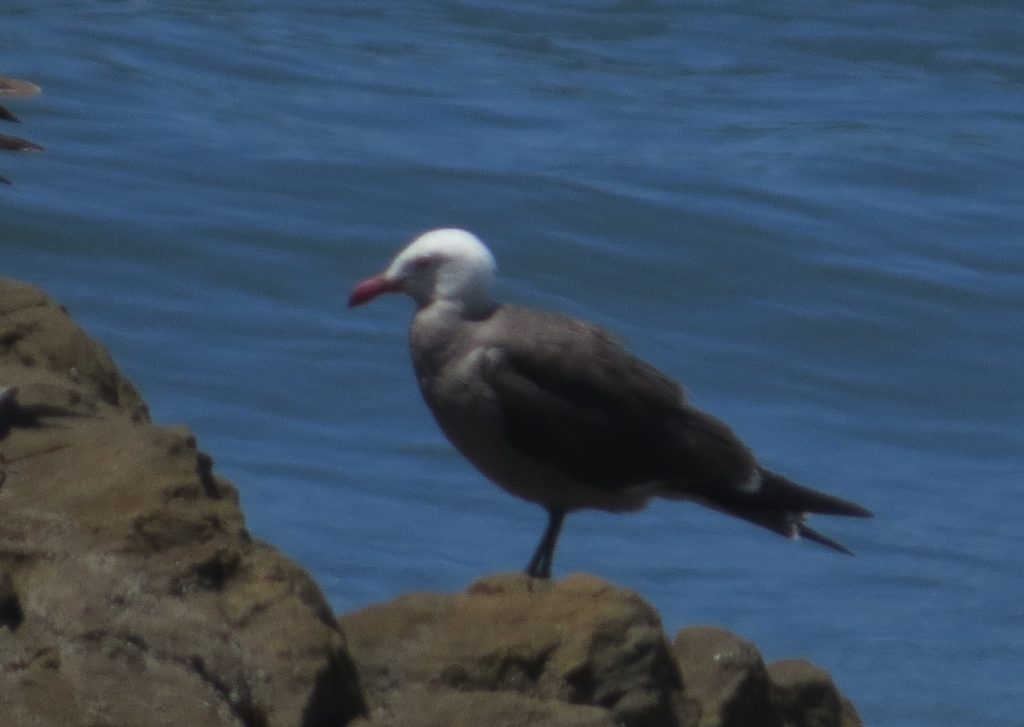 As nice as the Heerman’s Gulls were, I really wanted to find the Oystercatchers.  I gave up trying to pick out a Pelagic Cormorant on these rocks that were covered in Brandt’s Cormorants and Brown Pelicans. 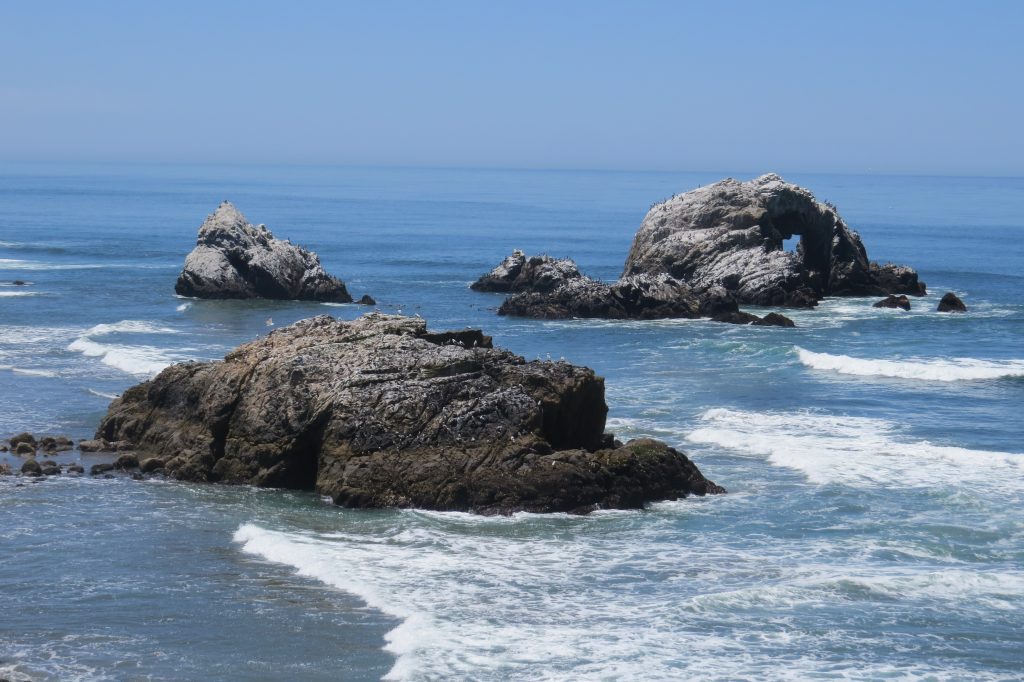 As I hiked down toward the ruins of the Suttro Baths, I paused to scan the rock in the foreground of the photo above.  Finally, I picked out the large black birds I was looking for–they were in the deep shadow of the large cleft on the right side of that rock.  Their orange bills stood out like beacons from the dark recesses of the shadow. 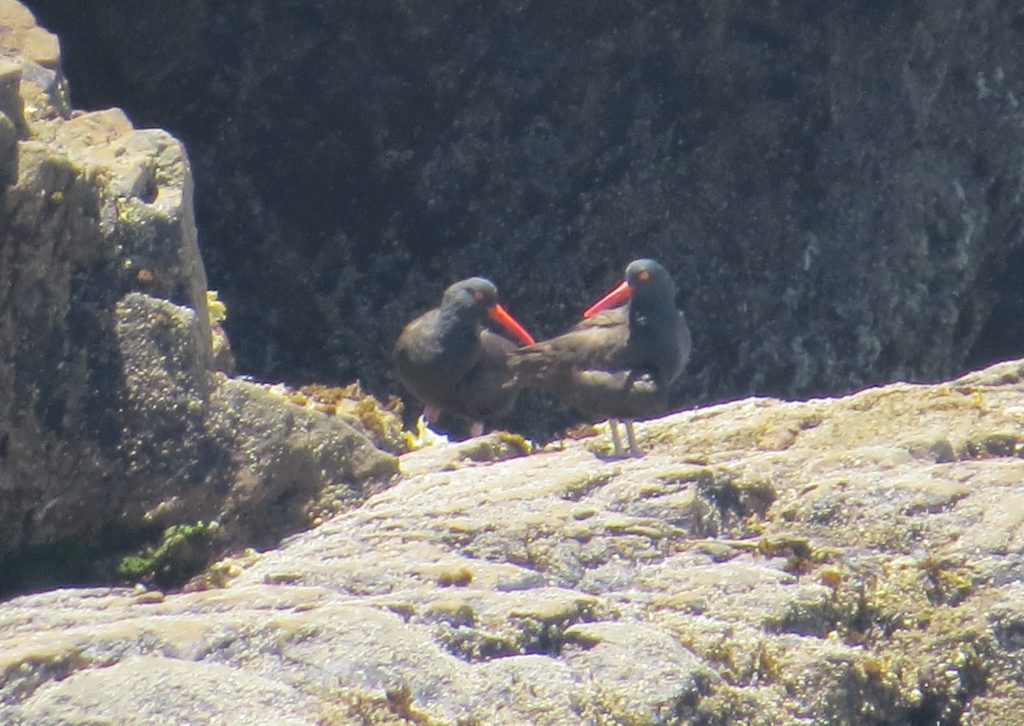 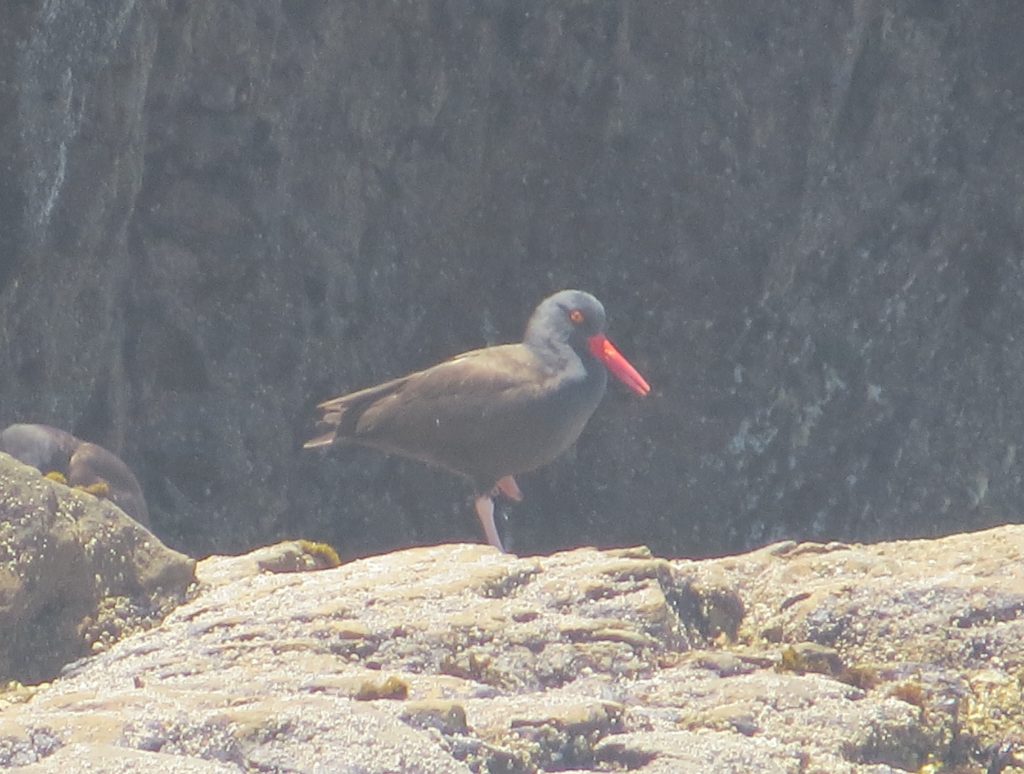 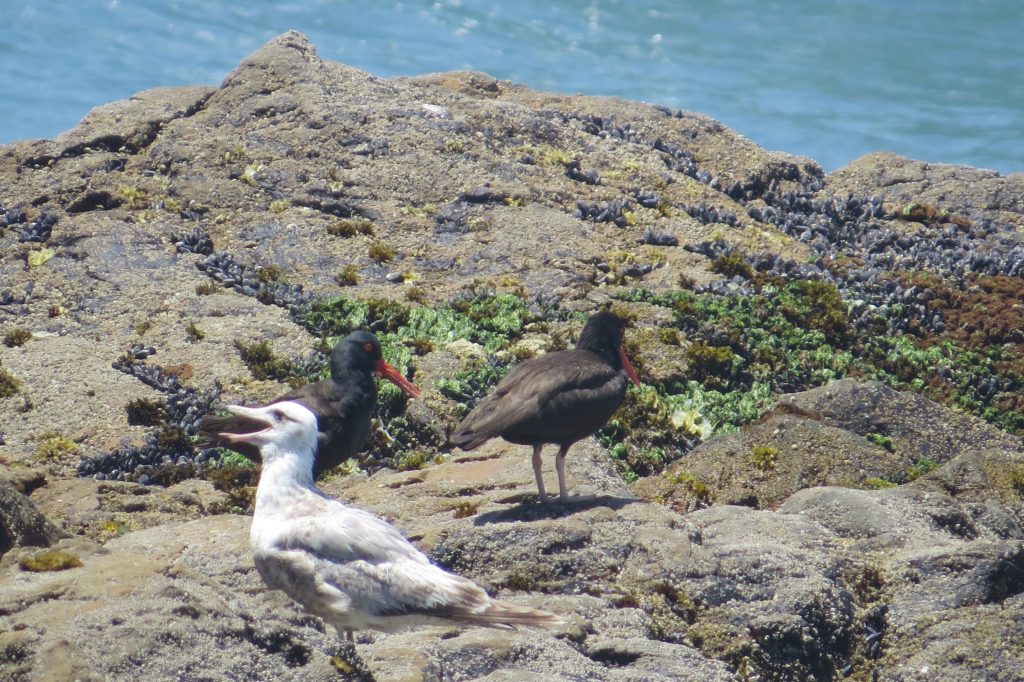 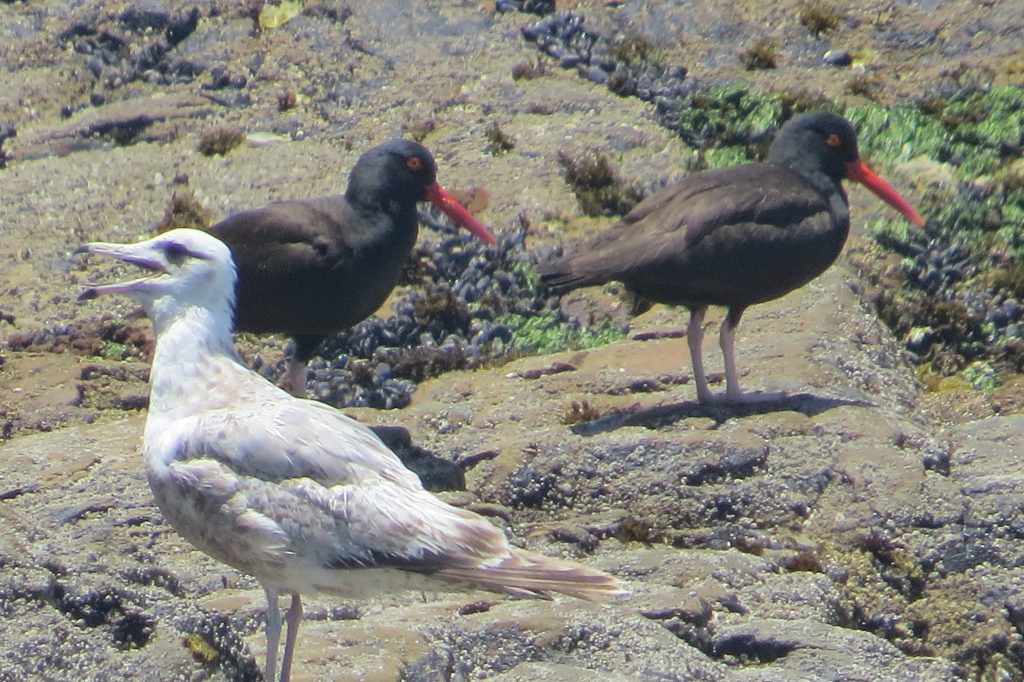 It wasn’t until a few days after our time at Ocean Beach that we made it back to the Pacific Ocean proper.  On our last day of vacation we drove down the Coastal Highway with no real destination.  I did want to stop at a spot near Half Moon Bay to look for an inland bird that I’ll write about in the next post.  Little did I know that I would nab two pelagic lifers as a bonus when we stopped at Dunes Beach State Park and enjoyed the ocean one last time. 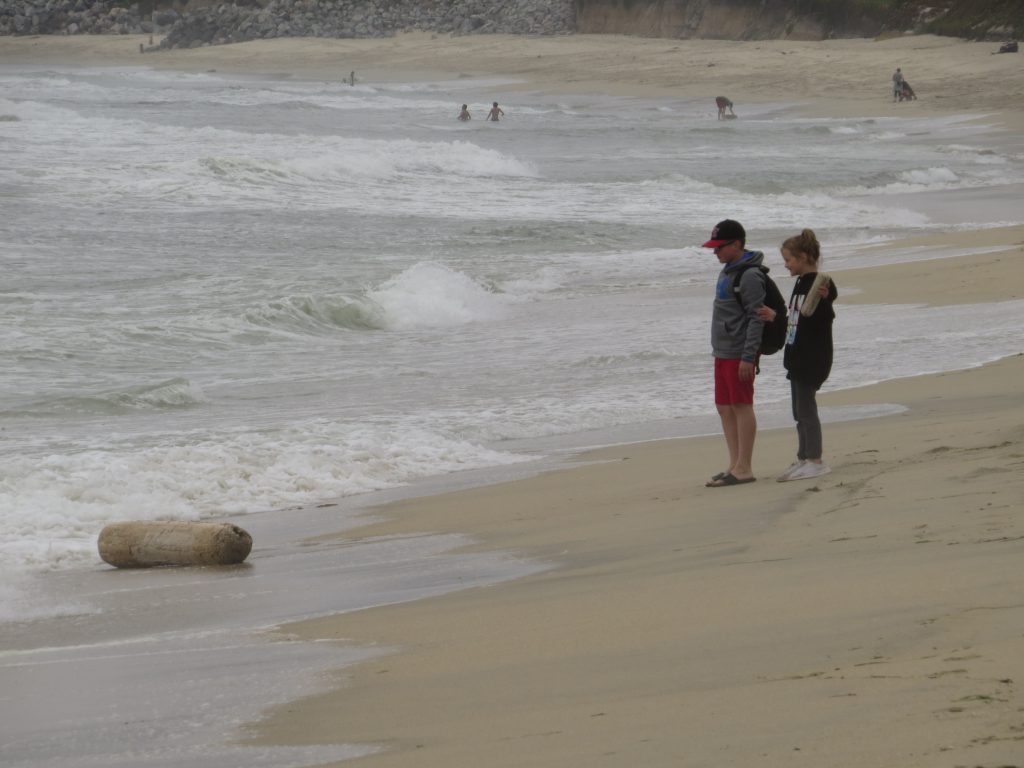 While the kids studied a log rolling in the surf, I studied beach chickens.  It was good practice to work on going through the key field marks of this immature California Gull, as seeing one in Minnesota is a rare but real possibility.  It was also good to see another “California”-named species in California. There will be more “California” birds in the next post. 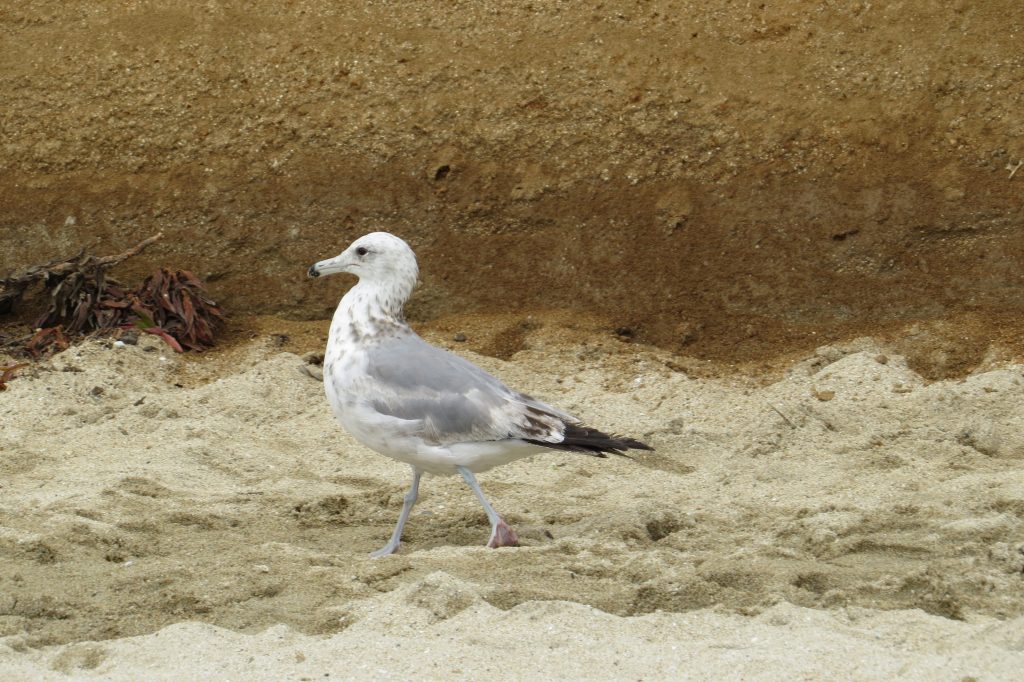 I also scanned the surf as the bird life was super abundant at sea. There, just beyond where the edge of the breaking waves, were several Common Murres, another lifer. 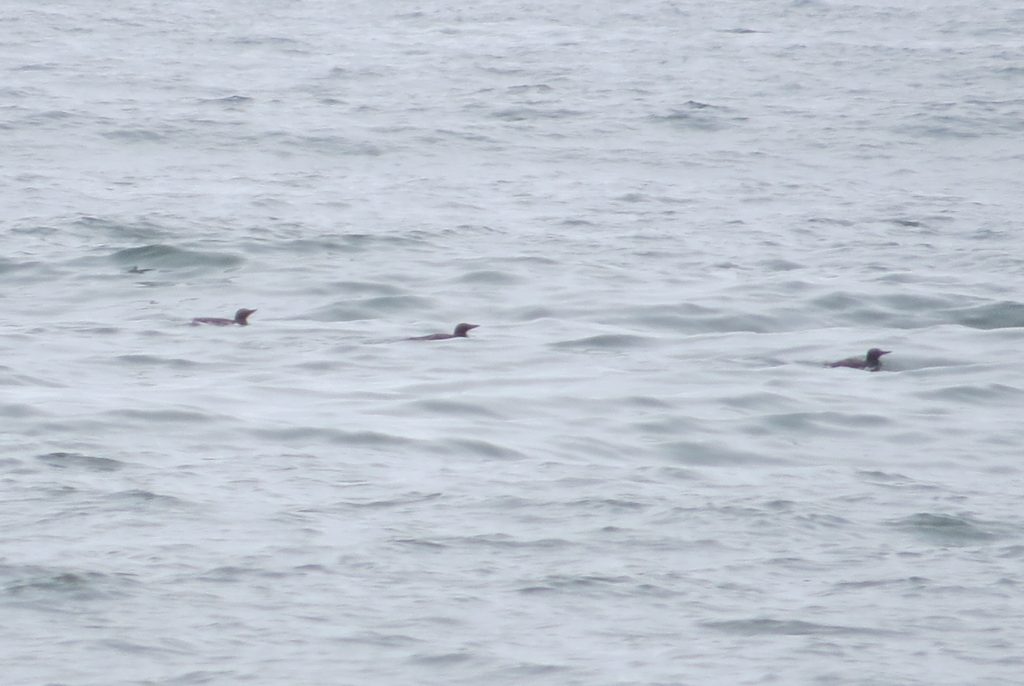 I certainly wished I had my scope along to better enjoy these birds and look for other interesting pelagic species. I did note that the Cormorants I was seeing looked a little different… 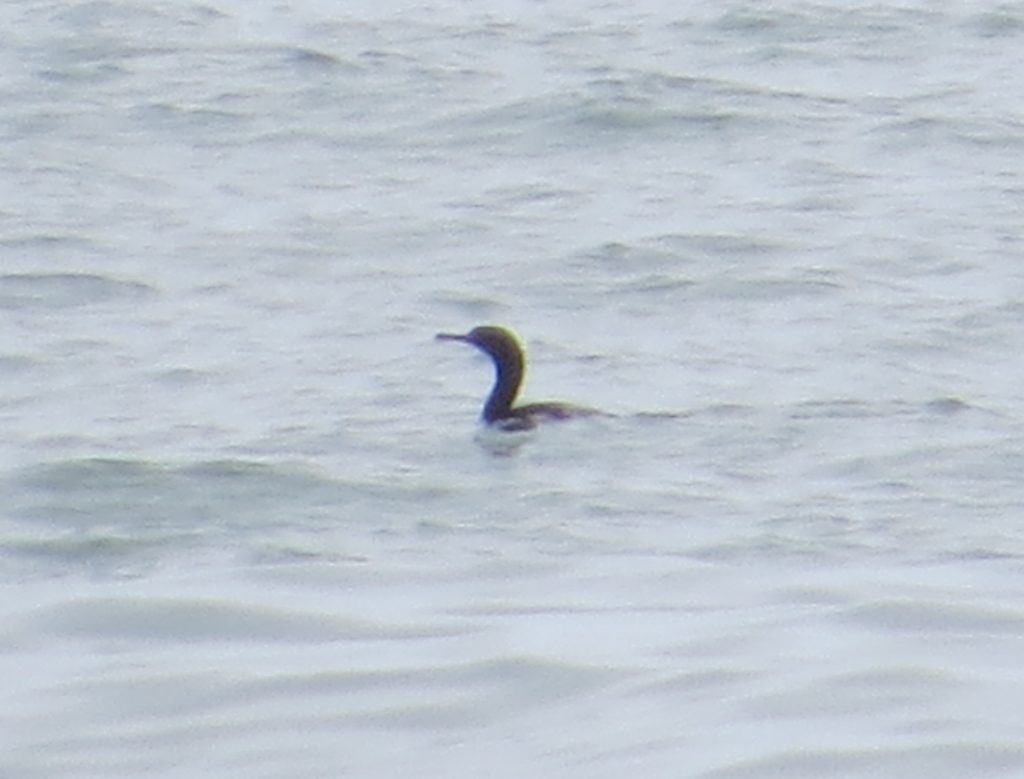 With the steep forehead and thin bill, this one looked good for a Pelagic Cormorant.  I would have liked a cleaner look, but I’ll take the lifer.

The ocean and its birds are fascinating.  Seeing the endless amount of bird life, the vast majority of which went unidentified due to distance, gave me my first appetite for a pelagic birding trip.  Someday.  For now there is still much work to do on land.  In the next post I’ll highlight my inland lifers on our California trip.  It will feature a big moment and a big bird.