I have a confession: I used to really hate Gulls.  Even in my early years of birding, I saw them as trash compactors and poop factories.  They’re everywhere, especially in nasty places like landfills, dumpsters, Wal-Mart parking lots…  To think of them as birds seemed degrading to the likes of Warblers and Owls. Then once I got to a point in birding where I was willing to accept them as birds, I was faced with the ID headaches of doppelganger species, multiple molt cycles, and hybrids, so I dealt with that like any normal person facing a difficult task–avoidance.  From reading around the bird blogosphere, I’ve come to learn that this reluctance to get into Gulling is normal.  Something happens to us all, though.  It’s inevitable.  Something finally gives.  For some, the turning point may come with seeing a really cool Gull like an adult Sabine’s.  For others, it could come when one has gained more confidence in identification.  For me, it was the fact that I had ignored a large pocket of untapped life Gulls in my own state.  It turns out that Minnesota gets a phenomenal collection of winter Gulls on Lake Superior in the Duluth area.  By putting this off for so long all the while going deeper down the rabbit-hole of birding, I had reached a point where I wasn’t reluctant any longer.  In fact, I was stoked to go after those Gulls from northern Canada. Minnesota birding phenom, John Richardson, fanned those flames by finding species after species of these rarer northern Gulls and posting jaw-dropping photos on FB.

So on our way north for Thanksgiving, the fam and I stopped by Canal Park to meet up with John and hopefully some of the cool Gulls.  I was on a bit of a bad-luck streak, though, after freshly missing the Kiskadee–so there were no Iceland, Glaucous, or Great Black-backed Gulls for me on this day.  I did finally get to see some adult Thayer’s Gulls, a bird that was previously just technically only on my life list because of a long-distance sighting of a juvenile.  This was better. Much, much better. 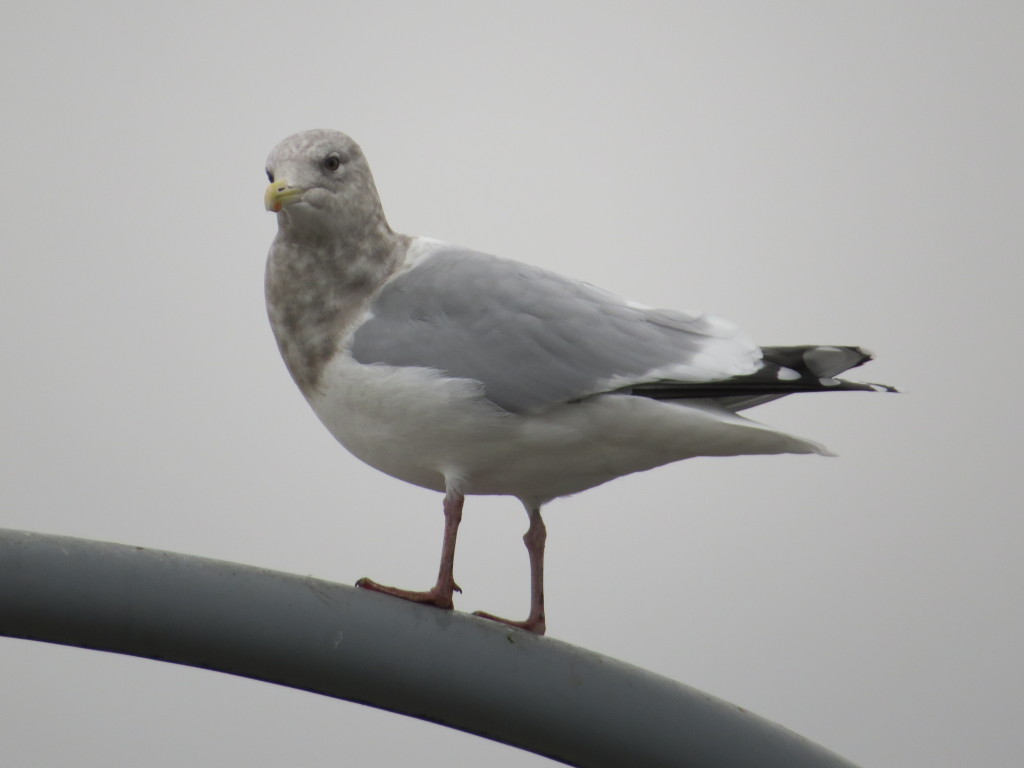 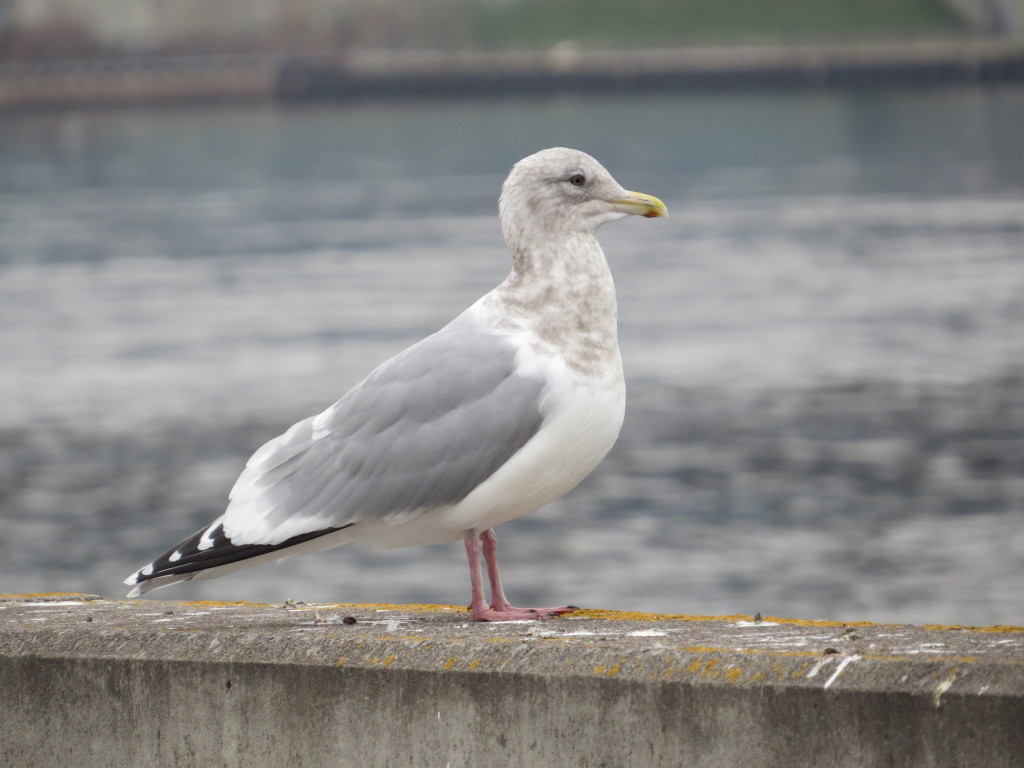 With the dark eye and hood, the Thayer’s really do stand out from the ubiquitous Herring and Ring-billed Gulls. 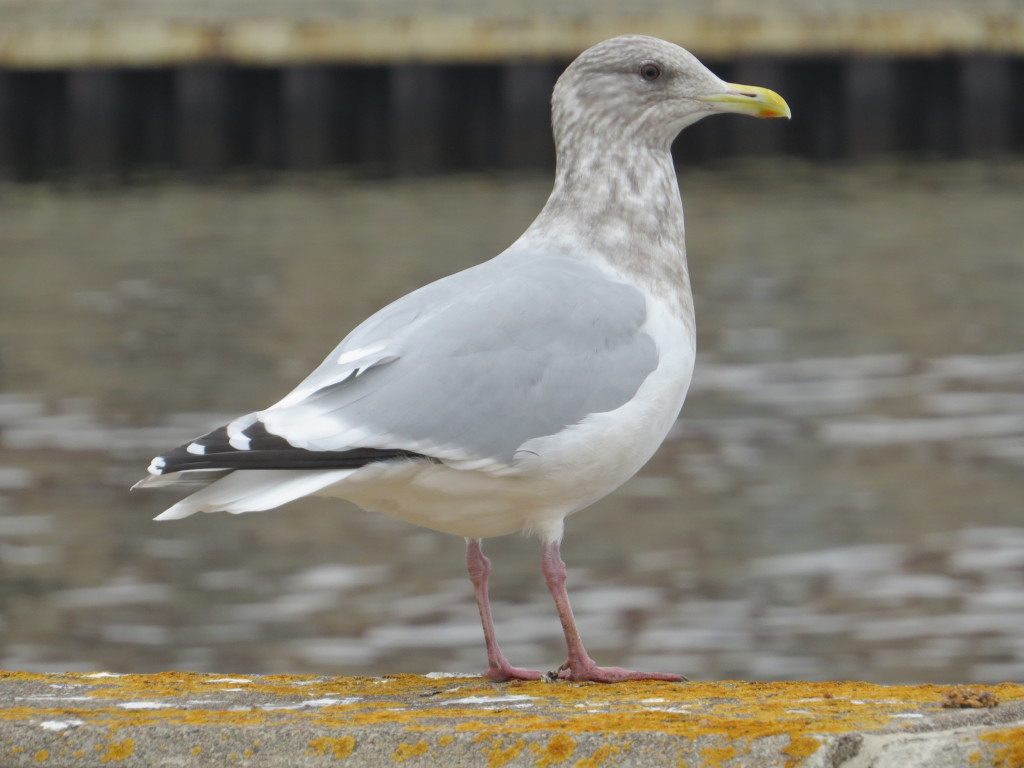 For the non-birder and the emerging Guller, here you can see a contrast between the Thayer’s on the left and the Herring on the right.  Note the difference in size, shape, and eye color (dark iris for the THGU, yellow for the HEGU). 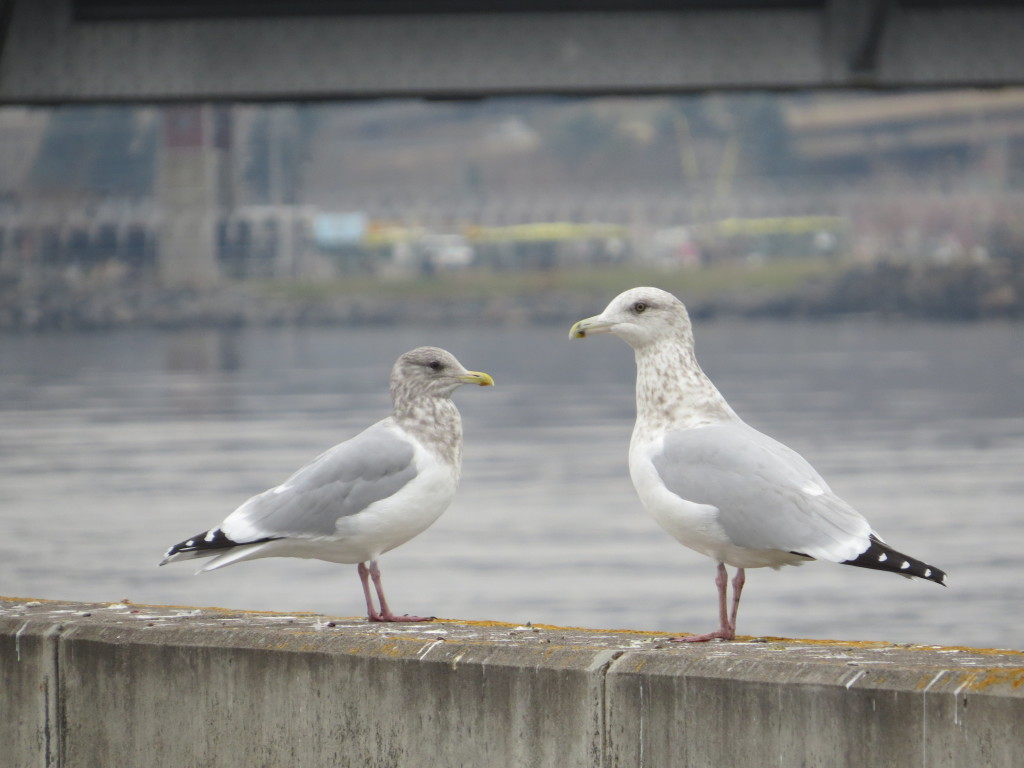 Gull identification is hard, especially if one is only looking at pictures or studying field guides.  Learning them from books is even kind of boring which I proved by falling asleep one night studying Gulls in Sibley.  To study Gulls and get to know them, one must learn Gulls through immersion–get yourself up close and in person among the Gulls and go with someone who knows more about the Gulls than you do.  Though I didn’t add any lifers on this try, my confidence and excitement for Gulling increased under the tutelage of John.

After this brief visit to Canal Park, we went further north to enjoy the holiday with family.  I desperately wanted to sneak back down to Duluth during our visit home to make another go of it.  Melissa suggested instead that we just stop there again on our way back south.  Good deal, wouldn’t you say?

In a form of birding symbolism, the sun was now shining brightly on our second try.  Little did I know just how bright things would get.  I did notice a lot more Gulls right away, though. 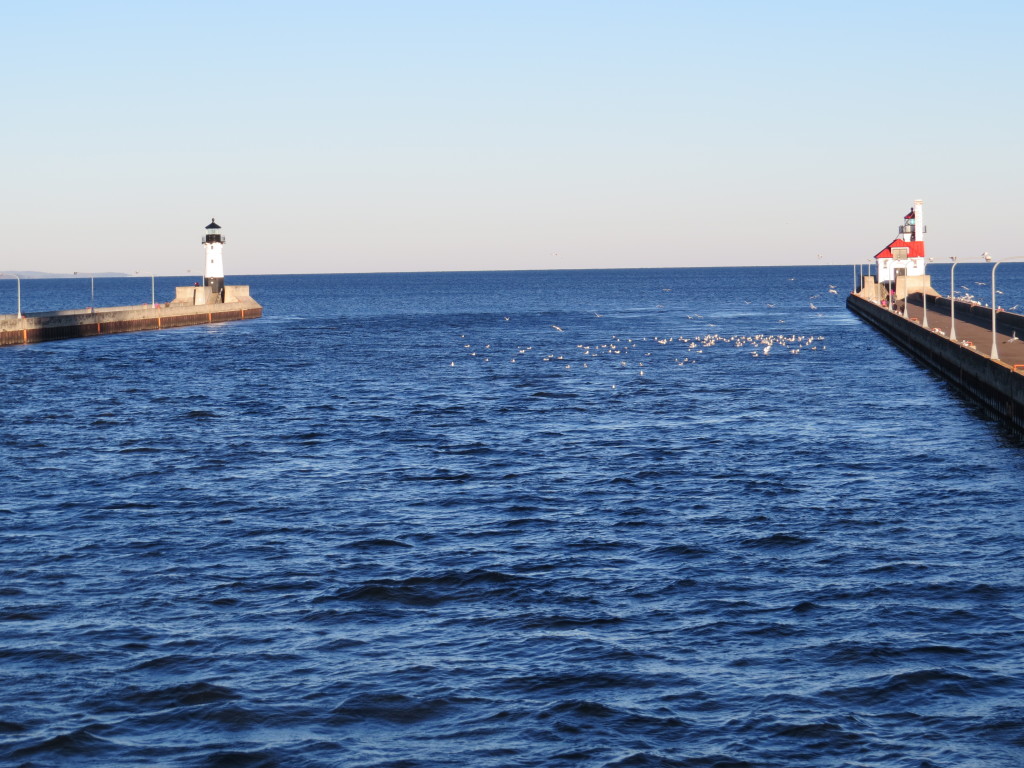 As I scanned the Gulls lining the pier on the right from the pier on the left, I immediately spotted the gorgeous adult Great Black-backed Gull John had found earlier that week!  Lifer! I could not wait to get across the lift bridge and over to the other side to check it out. Once over there, Evan and I were joined again by John Richardson and Tony Lau as well as the #1 eBirder in the state, Peder Svingen.  With about 600 Gulls to look through with some of the best in the business, this was going to be awesome.

As the four of us slowly made our way down the pier, John quickly picked out the 2nd-cycle Iceland Gull he’d found earlier! Lifer #2! 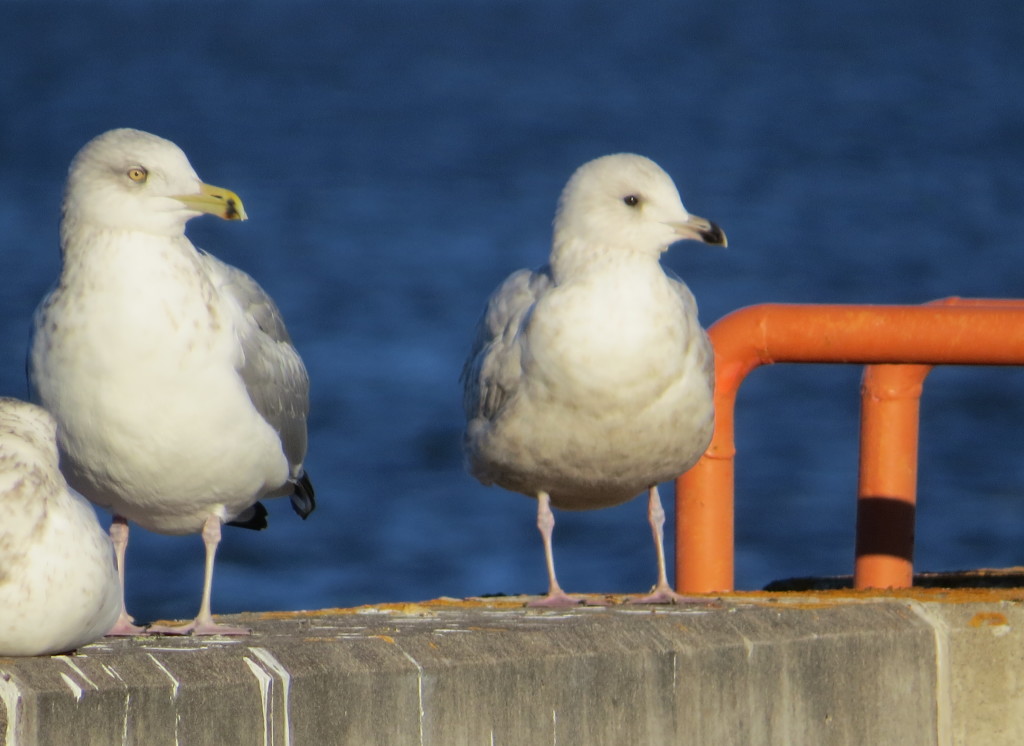 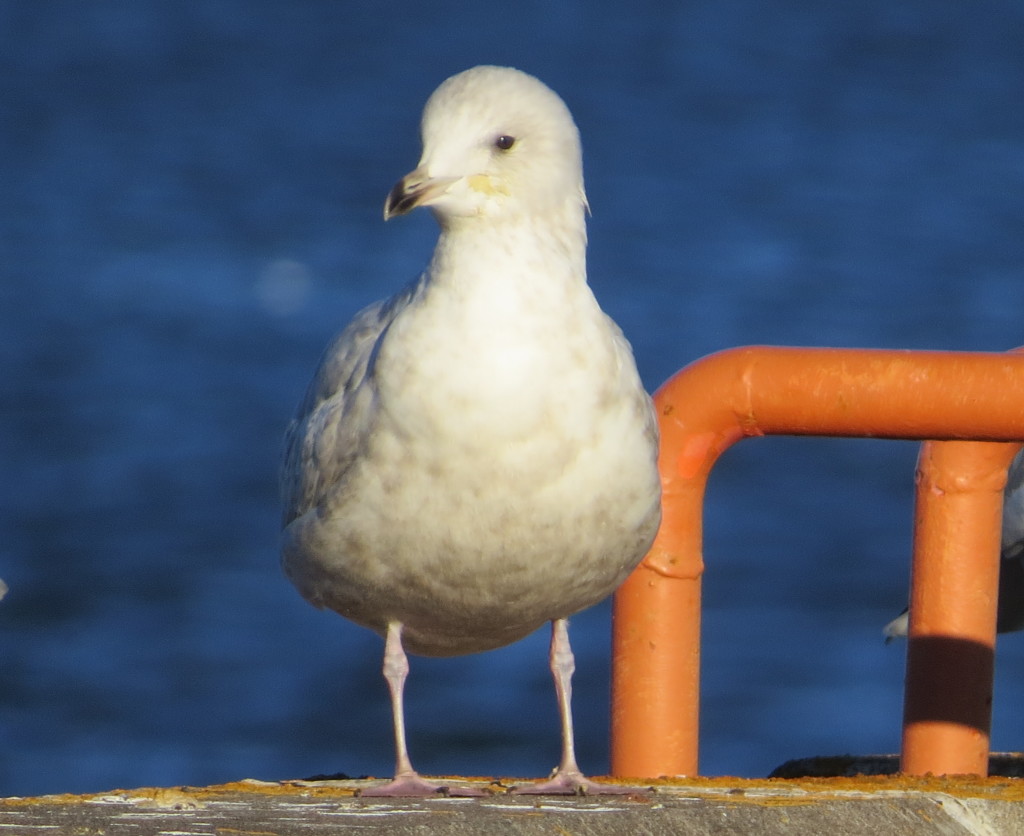 The Iceland was cool, but I was really itching to make my way to that Great Black-backed for some photos.  But, you don’t rush down the pier and get out in front of a birding Jedi like Peder Svingen. Patience, young Skywalker. Many Gulls to go through have you. 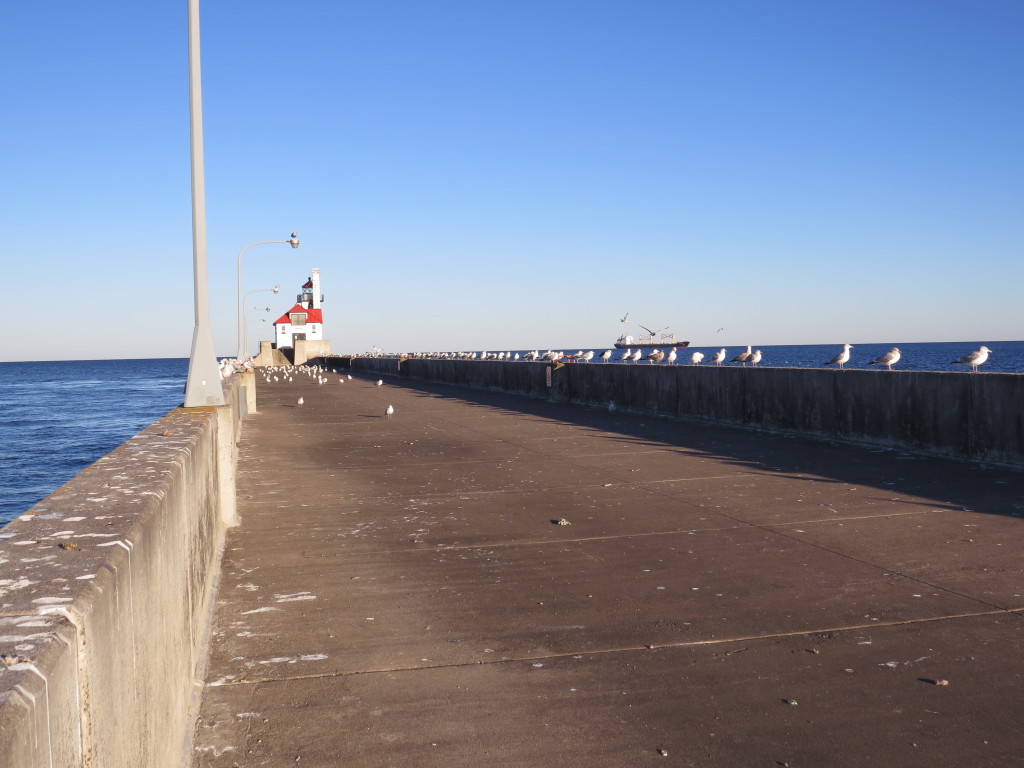 While I waited, a Thayer’s was begging to be crushed. 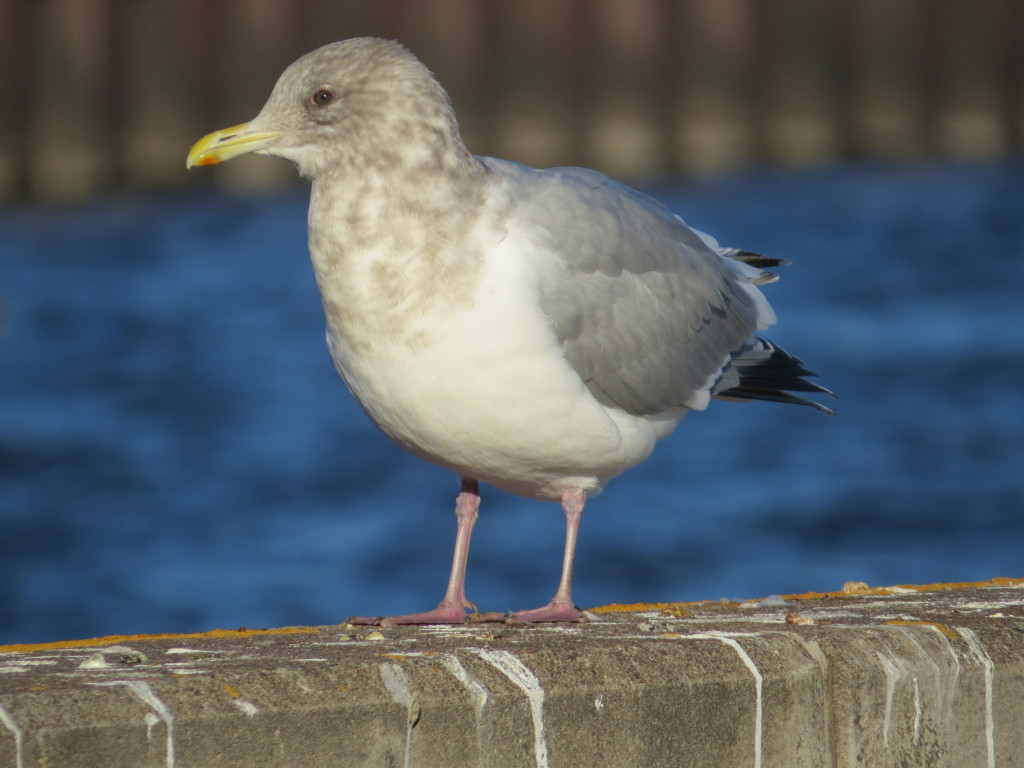 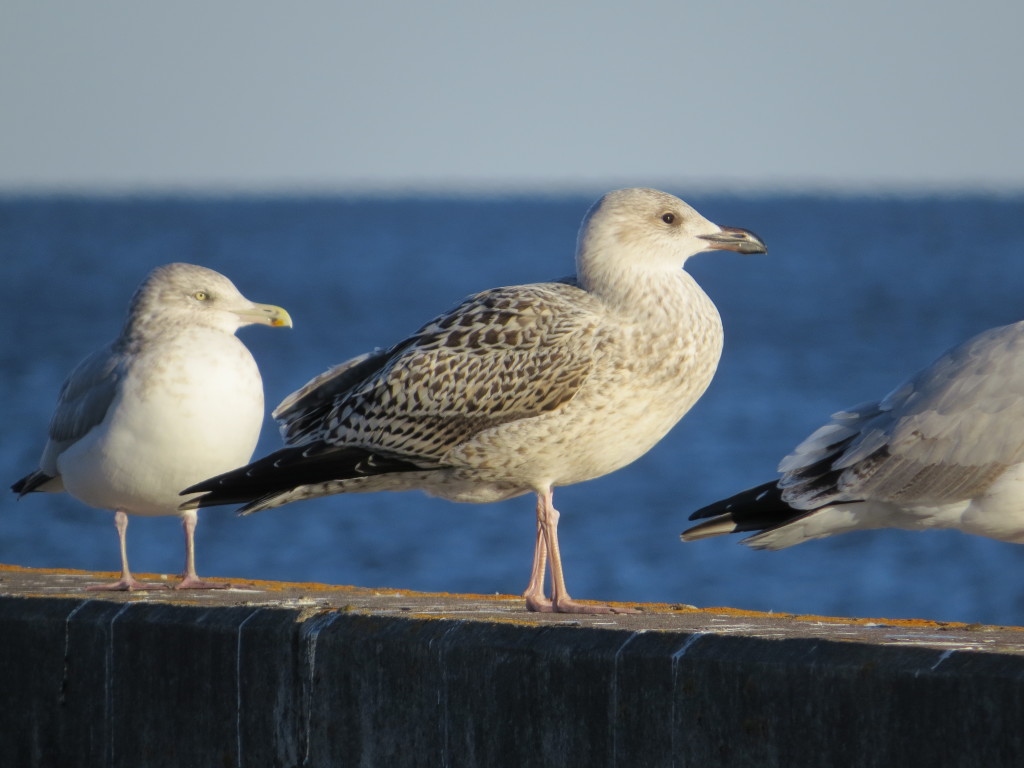 I love how this HEGU is checking him out. 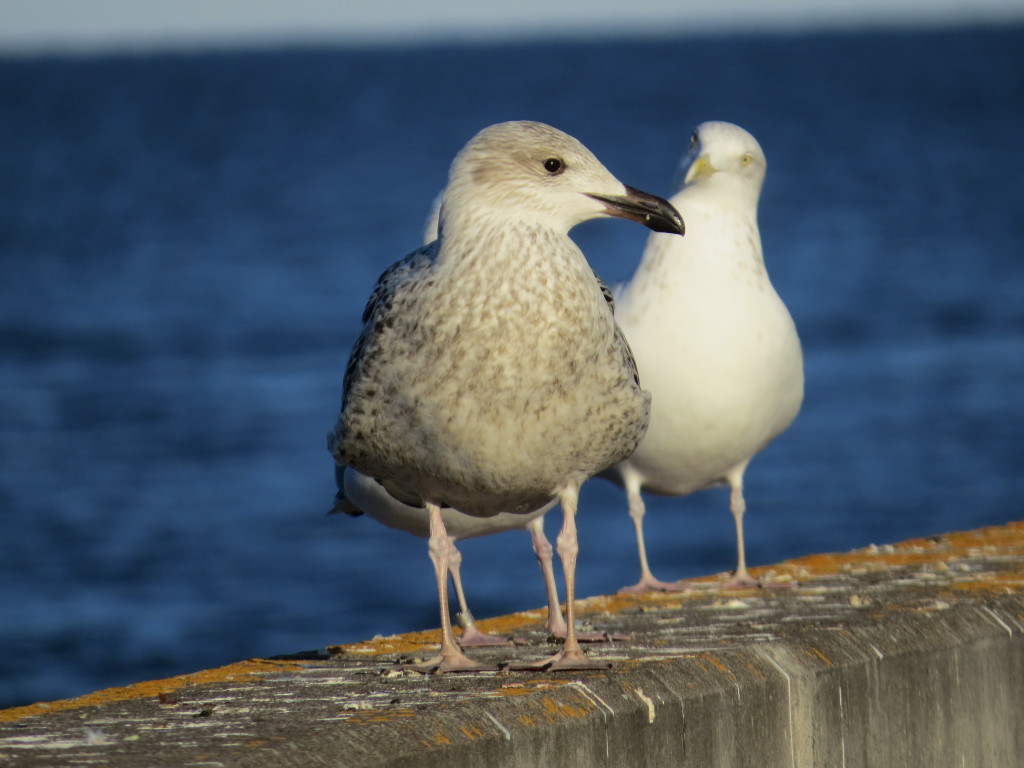 Seriously, though, look at this bruiser. 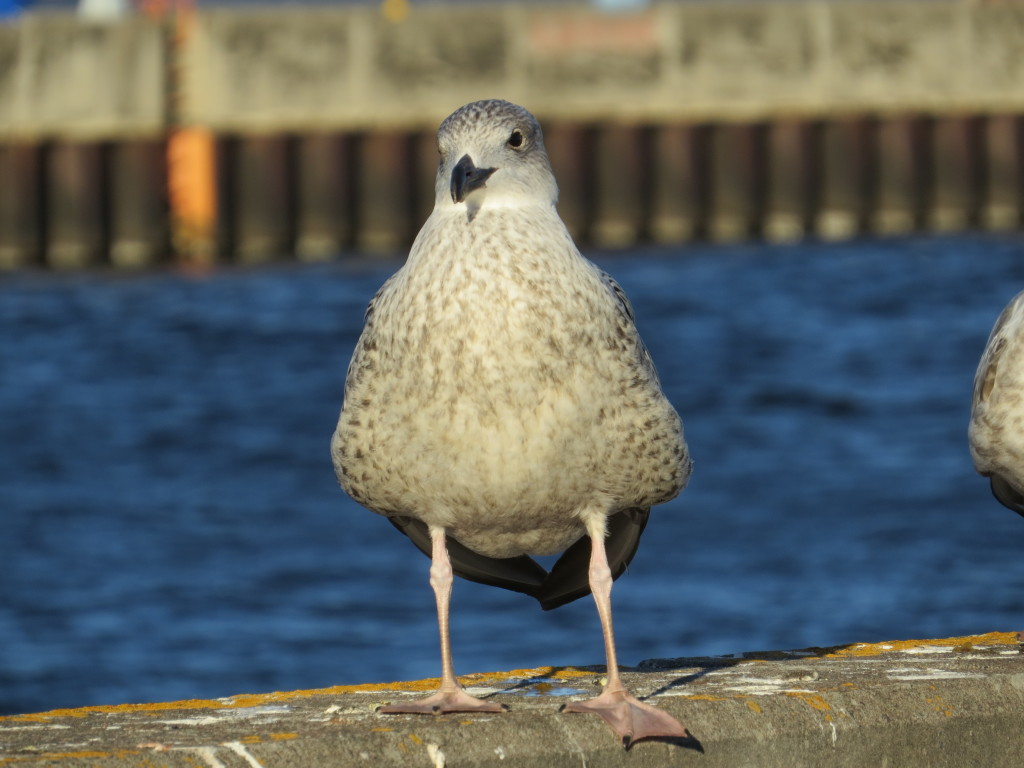 The Great Black-backed Gull is the largest of the Gulls; it dwarfs the Herring Gulls. 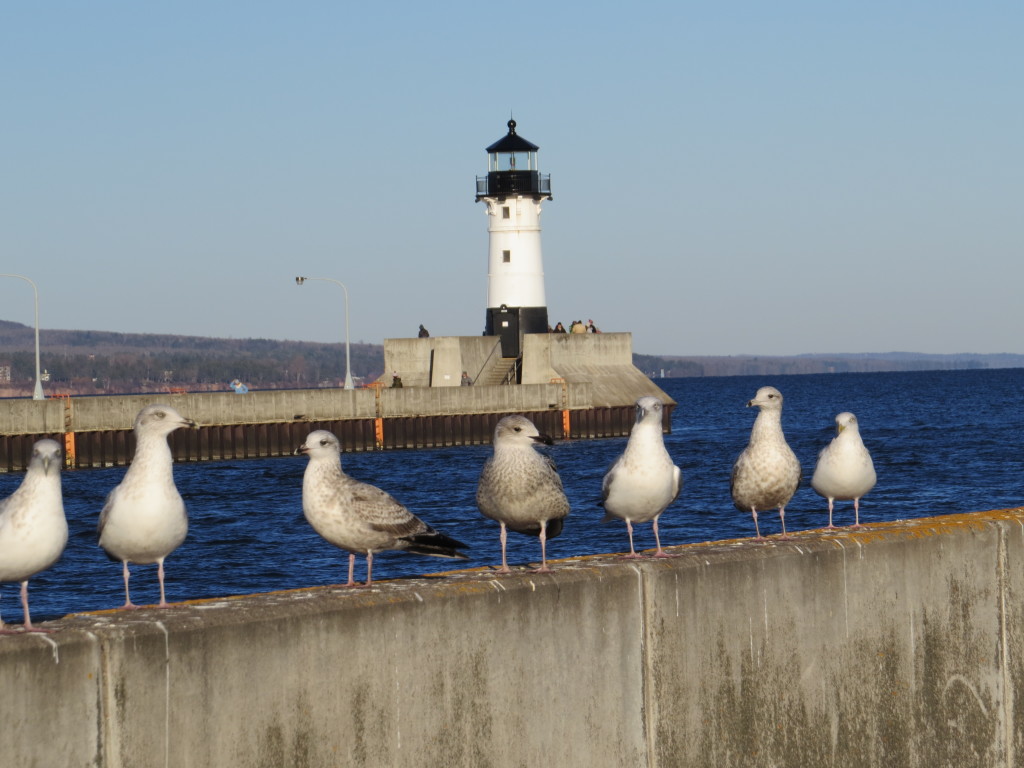 As we were getting within photographing distance of the adult Great Black-backed Gull, magic happened.  The other guys spotted our third lifer of the hour, the stunning and large Glaucous Gull! 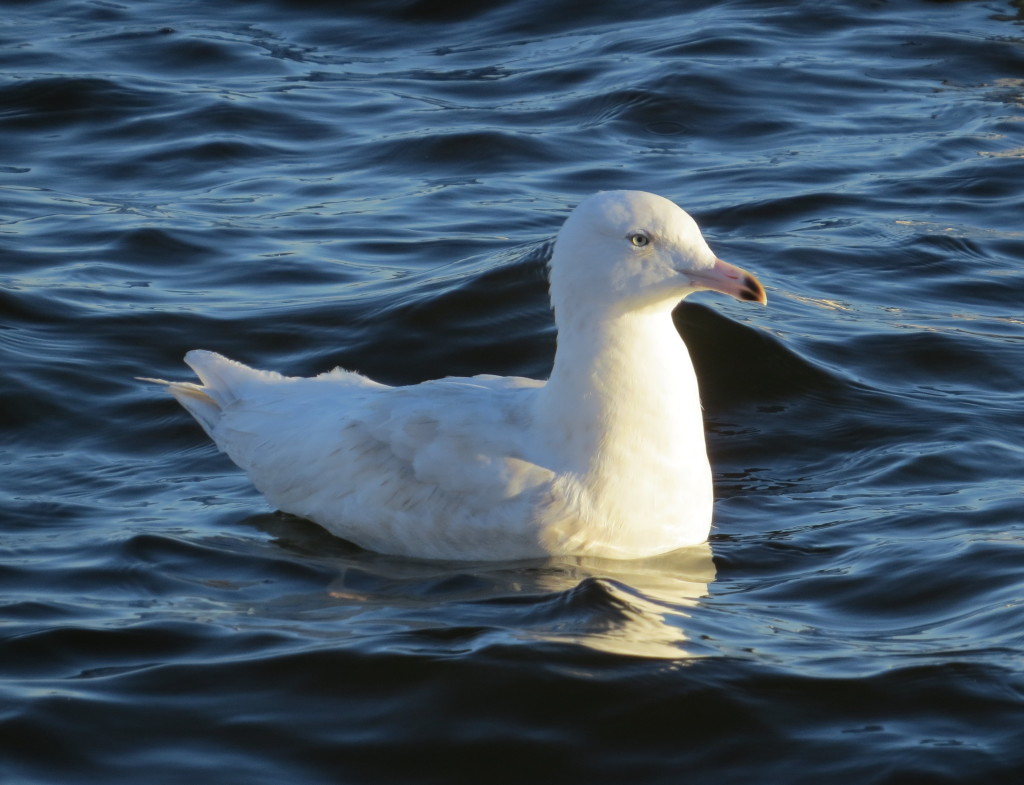 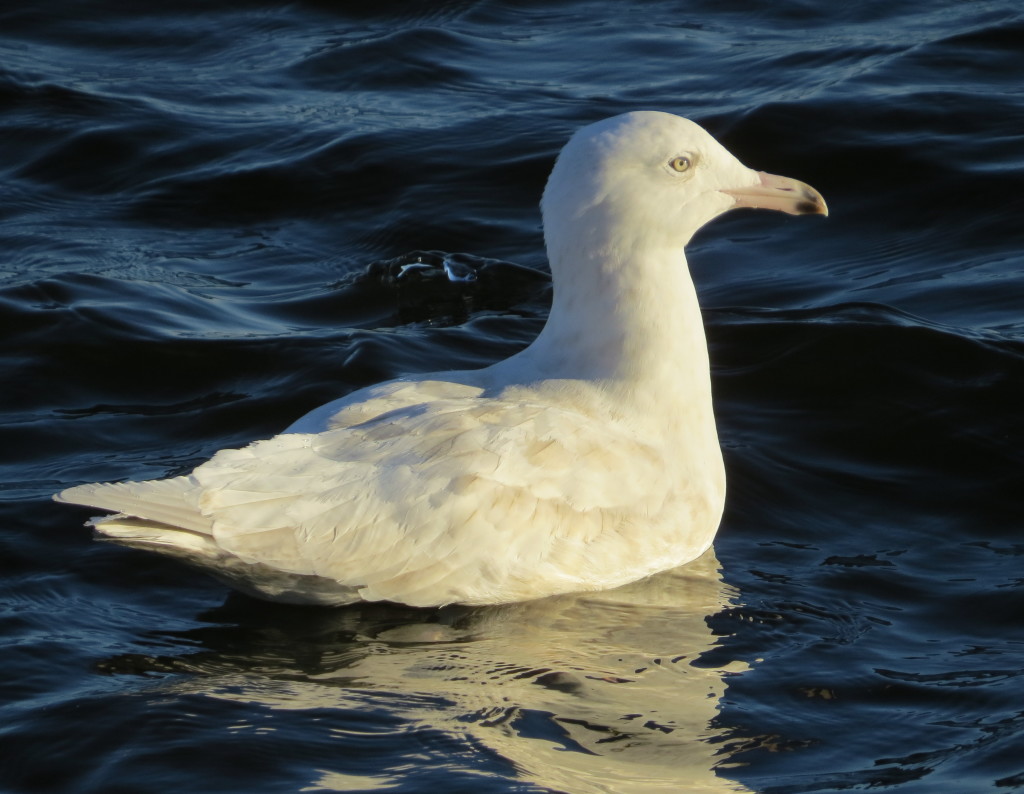 With the Glacous, I now had all three hoped-for lifers and got all my northern Gulls in one tidy outing.  The only thing left to do was to photograph my favorite of the three lifers, the adult Great Black-backed Gull, a stand-out bird. 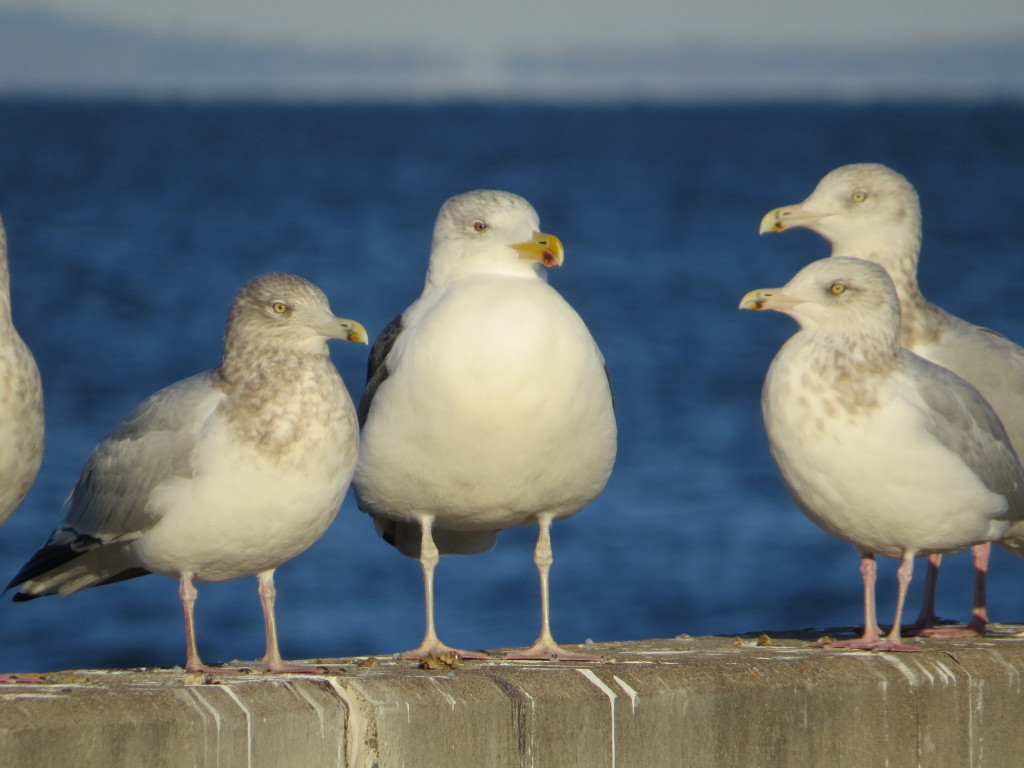 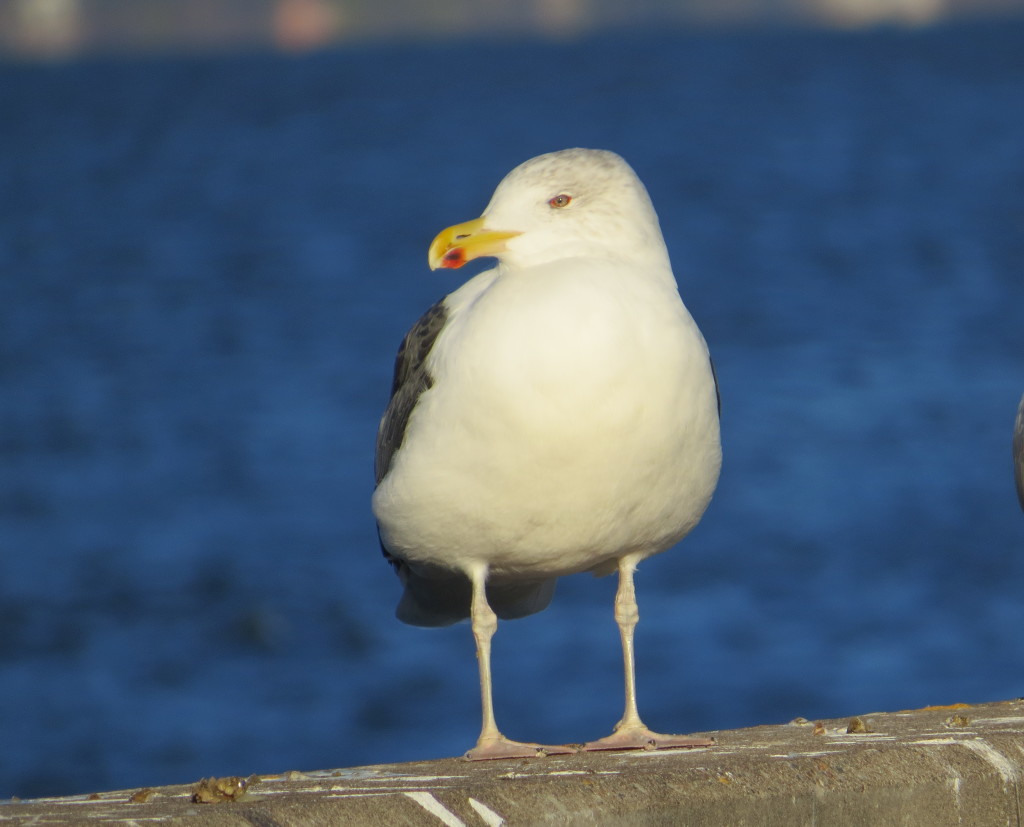 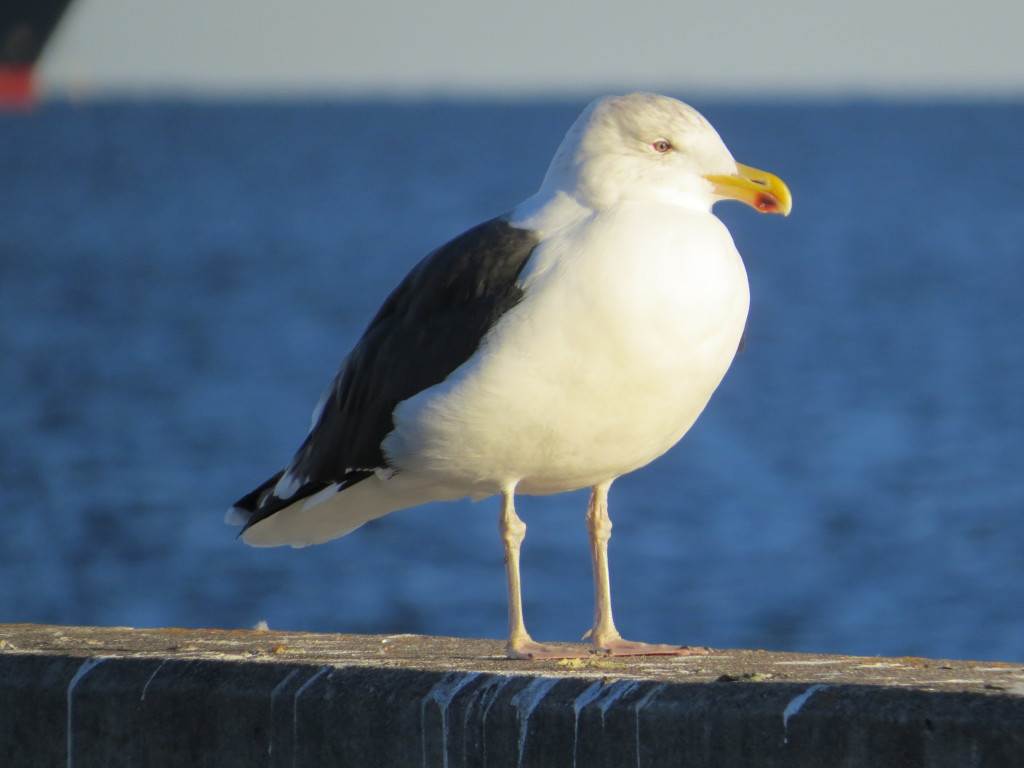 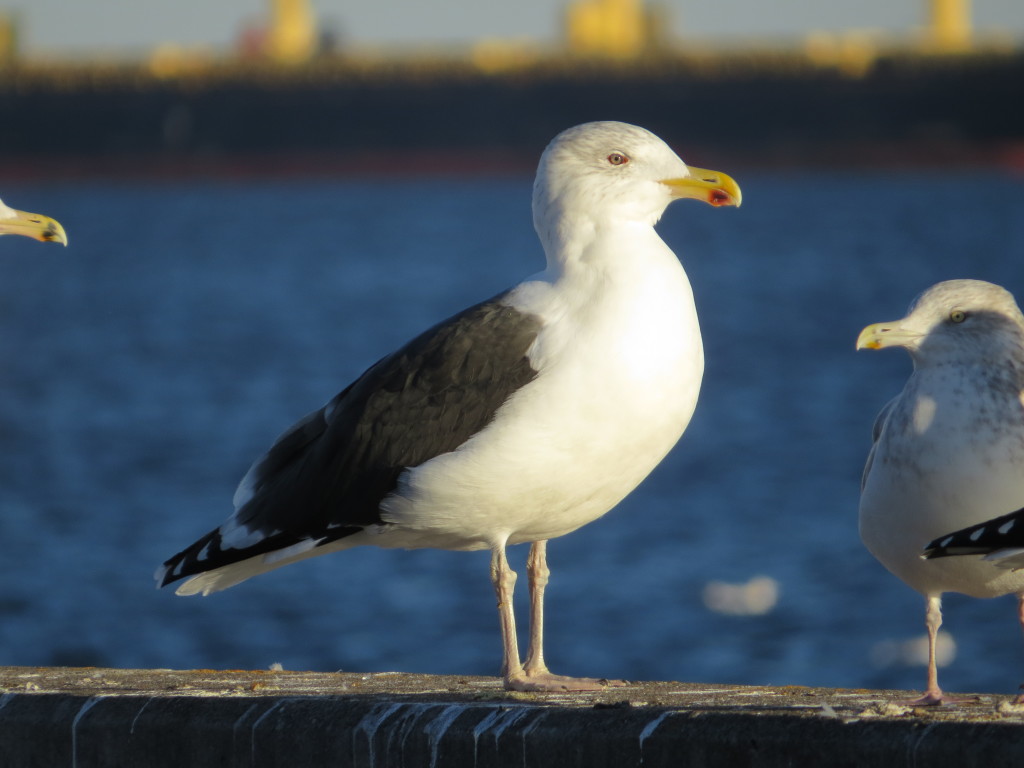 The icing on the cake was that all this Gullifering took place in under an hour, and Evan and I got back to the car where the girls were patiently waiting for us.  It was a dream outing.  I’m glad I’d saved these Gulls for this late in my birding.  The timing was perfect because I thoroughly enjoyed this experience and couldn’t have had it any better.  Sorting through the hoards of Gulls for the hidden treasures with some talented birders made it all the more fun.

A huge thanks goes out to John Richardson for his daily patrols of Lake Superior, his great Facebook reports, and for his help in pointing out a couple of these lifers.  Call me Gull-able, but I now think these birds are pretty cool.