For some time it has been a goal of mine to see all 19 regular species of Owls that reside in the U.S.  Getting the Boreal Owl this past January was a dream come true in itself and put me within one Owl of reaching my goal, with the Ferruginous Pygmy-Owl being the holdout. FEPO can be notched relatively easily if you’re willing to pay a hefty fee and travel to the King Ranch in south Texas. And I was. Our family had planned to take a very large cross-country road trip this summer, and my plan was to hit up King Ranch on the journey. Plans changed though. It’s funny how owning two houses for nearly a year with no end in sight will do that.

Eventually sweet relief came in the housing situation in March, but it was too late to resurrect any mega road trip plans. I did start talking to my buddy Tommy DeBardeleben, though, about trying to recreate his AZ FEPO magic from 2016. FEPOs are resident in small numbers at Organ Pipe National Monument along the U.S./Mexican border. They are very tough to come by there, but Tommy and others have proved it is indeed possible.  Success would be even sweeter in AZ considering I’d be with Tommy who’s helped me get so many other Owl lifers.  After discussing the decision with “Screw Texas” Tommy and cajoling my buddy Steve Gardner into making the trip with me, plans were set for a fast weekend trip in mid-April.

April unleashed some of the worst winter weather we’d seen with blizzard after blizzard pummeling us. The MN forecast for our AZ weekend was grim. Steve and I planned to leave Friday after work, and all day long we wondered if we’d make it out of the state. Getting to the airport was sketchy. The temp was hovering right at freezing, causing the road to quickly become ice-covered from the snow/rain which slowed us down. The main thrust of the storm would start that night after we were scheduled to take off. And it was forecast to be a doozy–lots of snow, lots of wind, lots of closures.  We finally made it to the airport and as we waited for the flight, Steve and I distracted ourselves from the possibility of a canceled flight by keeping up with the latest bird happenings on FB. One really caught our eye–a Fan-tailed Warbler was just reported in the Chiricahuas in SE AZ. Steve and I had never even heard of this Mexican Warbler before the posting. It was interesting, but we were focused on the Owl prize. Besides, a Warbler could quickly disappear…

Steve and I were relieved to actually get on the plane (the airport was predicted to be shut down sometime in the night and all the next day).  Getting the plane off the ground was another story. We sat on the tarmac for a long time. 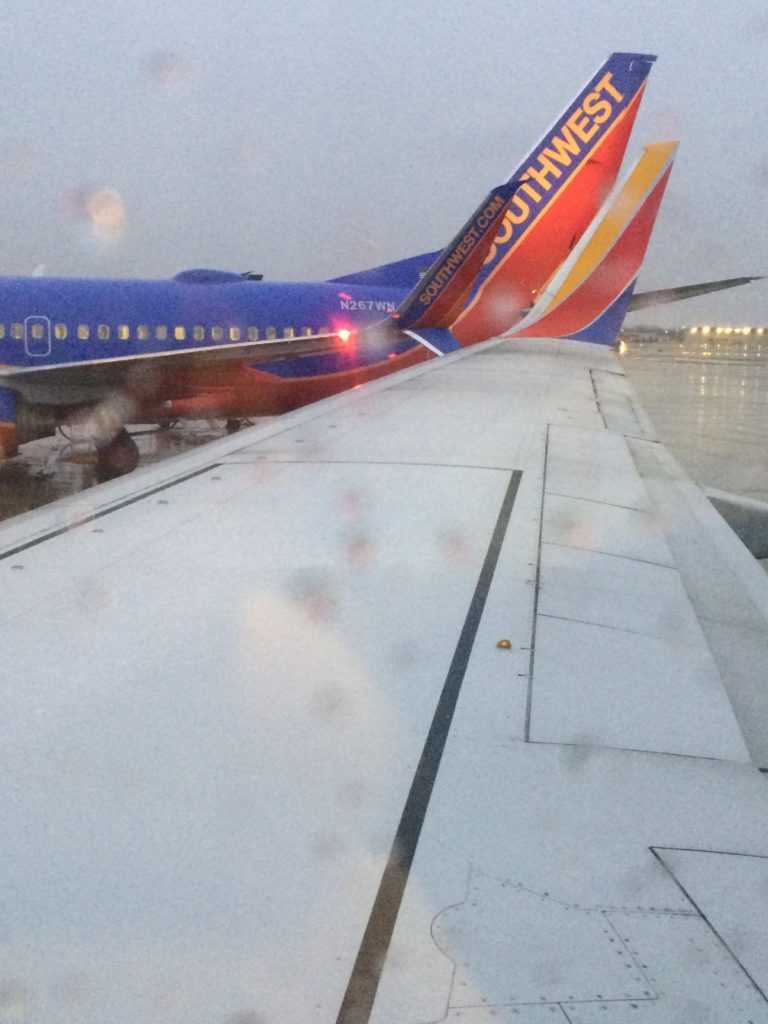 Shortly after we de-iced, we got word that we couldn’t take off until the rain turned to snow, which was frustrating since the rain had been snow when we got on the plane. The possibility of this trip getting nixed was growing. There would be no flight out on Saturday.  Finally, though, the Captain gave the good word and we were in the sky only one hour behind schedule.

The Parents extended their snowbirding long enough (smartly) to not only avoid the lingering MN winter but to also be there to pick us up from the airport, be home base for the excursion, and lend us a vehicle. Thanks Mom and Dad!  Late that night we rendezvoused with Tommy at their house.  There was time for a 3-hour “nap” before our morning alarms would wake us for our 2-hour drive south.

Exhausted as we were, we made it to Organ Pipe. It was FEPO time. 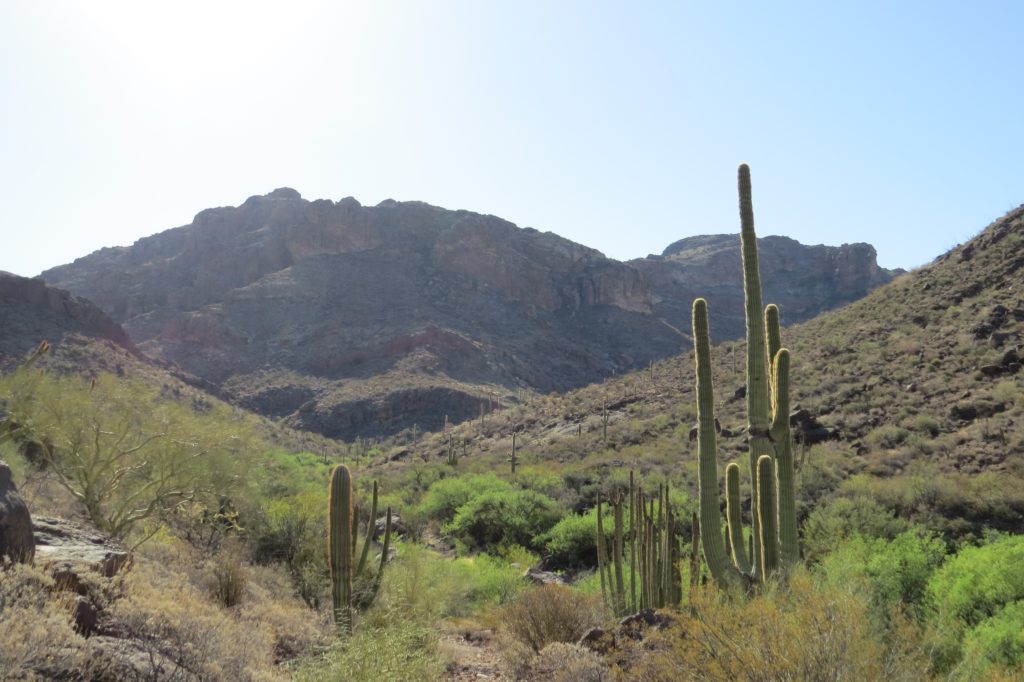 Owls aside, I think Steve and I were just enjoying not being in a blizzard. Our sympathies for our families back home were quickly eclipsed by the beautiful weather we were enjoying. We picked a great weekend to be in southern Arizona.

Expectations for FEPO or any new lifers were low as we began the hike up Alamo Canyon. I mistakenly thought I might get one new non-FEPO lifer in Organ Pipe.  Shortly into the hike Tommy announced the presence of a Pacific-slope Flycatcher. Thankfully he did not announce the presence of a smuggler, though anyone smuggling in a load of Mexican FEPOs would have been met with open arms. 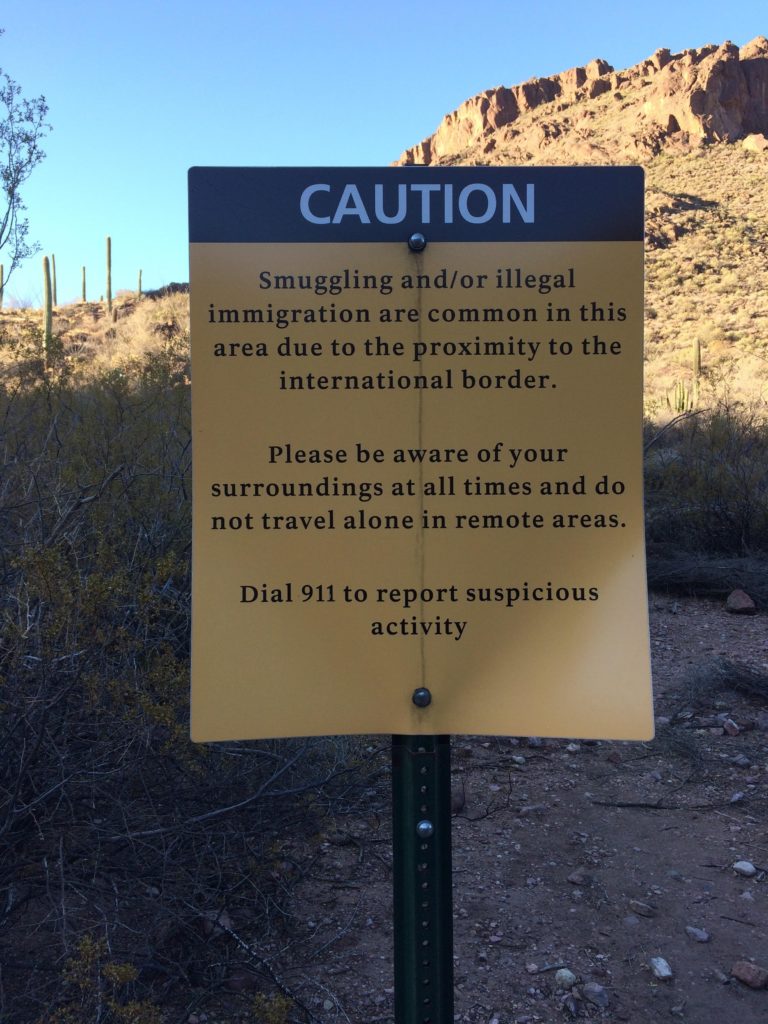 As we continued our FEPOless, smugglerless hike up Alamo Canyon, we notched a heard only MacGillivray’s Warbler lifer. I totally forgot about the fact that we’d be in Arizona during migration. What else might we find? Well, a Gray Vireo was certainly not on my radar but was now on my life list. It was great to see one, but I was kinda saving that one for Janet Witzeman to show me–eventually I’ll blog about that backstory. 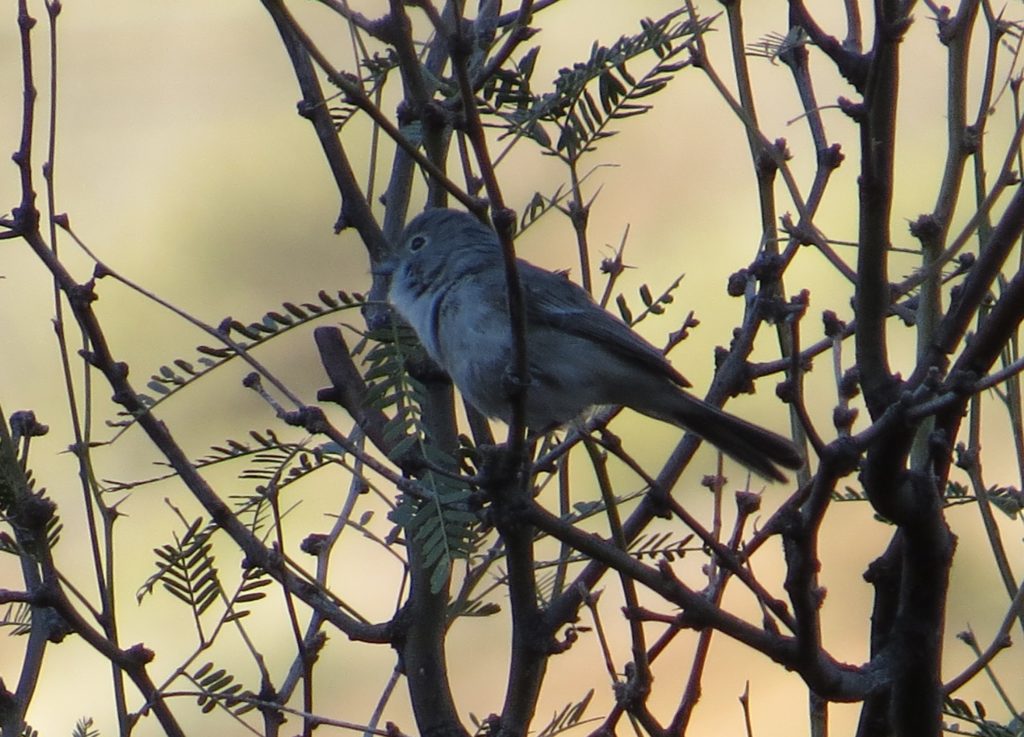 Not long after the Gray Vireo fun it was time to head back down canyon sans FEPO. A petty consolation came in the form of another Vireo lifer we missed on the way up, one of the Cassin’s variety. 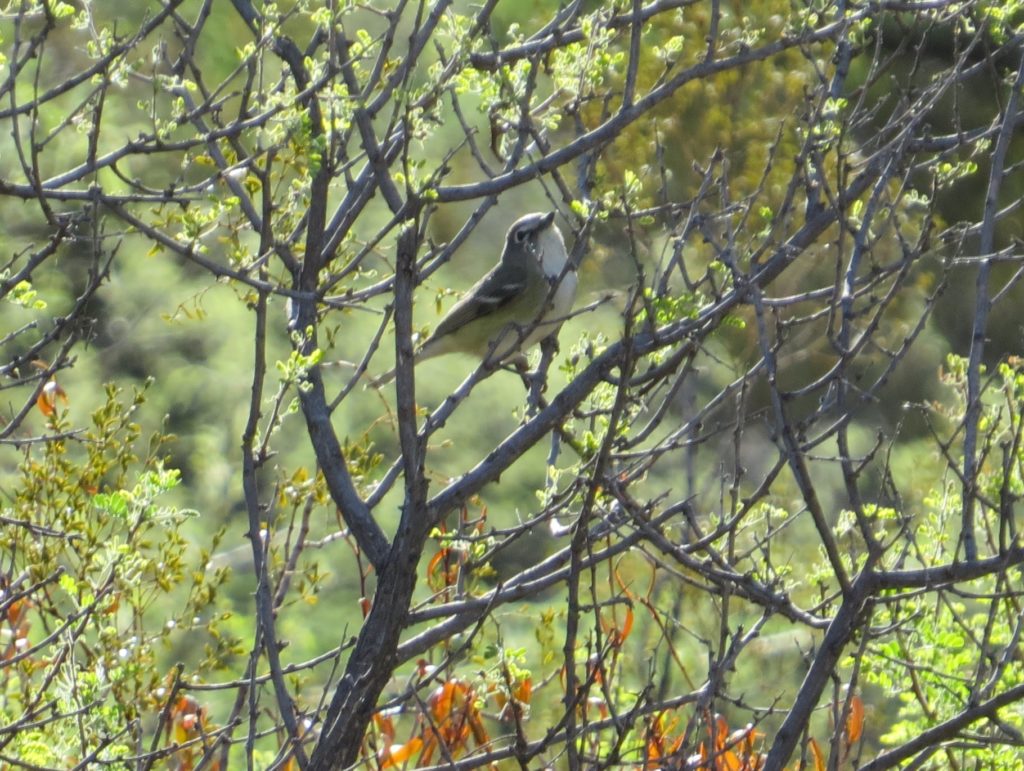 Back at the trailhead for Alamo Canyon, we paused to figure out what was next. FEPO searching in the heat of the day is pretty useless, and the Organ Pipe area really held nothing for us (especially after the bonus lifers).  We’d have to travel a significant distance if we wanted to get in some more good birding. We landed on going to Madera Canyon to Owl at night. This was not a deviation from the original FEPO plans; one of the carrots to make the trip appealing to Steve was to do some other Owling as well. He could potentially rack up several Owl lifers in one night.  FEPO searching would resume Sunday night and Monday morning since we would spend Saturday night somewhere near Madera.

By the time we left Organ Pipe, the morning was still quite young, so we had plenty of time to do some daylight birding before the night Owling.  With mindset properly switched, I was ready for some great SE AZ action during the FEPO break. A couple notables on the drive, such as Prairie Falcons and a Crested Caracara, only amped up the excitement.  Our first stop was the famed Santa Gertrudis Lane. Several high-profile birds had been there of late, such as Sinaloa Wren and some Rufous-backed Robins.  As we walked to the Wren spot marked by a weird plastic tricycle from last century, we picked up another couple lifers, flyover Gray Hawks and a confiding pair of Dusky-capped Flycatchers. I was struck by its petite size compared to other Myiarchus species and surprised at how much I enjoyed this lifer. 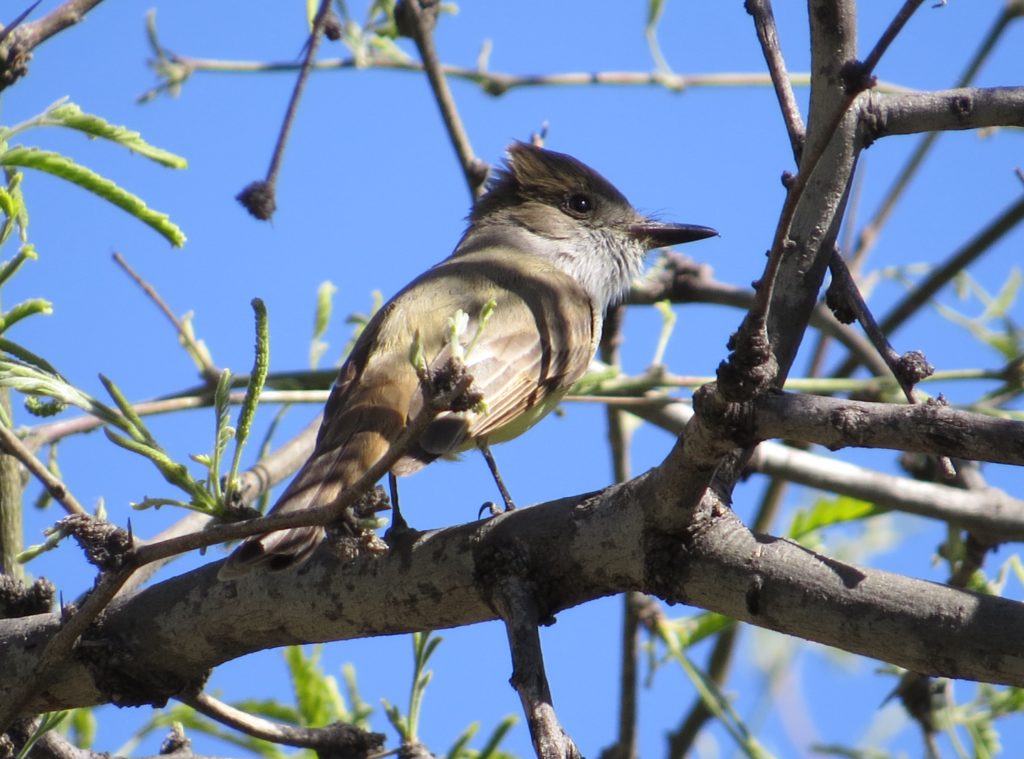 We missed the Wren despite a solid effort, and we nearly missed the Robins too. As we were hiking out, we met a group of birders and traded intel. We had bad news for them; they had good news for us. They had seen three Robins where we had walked by! The nice guy even guided us right to them. I don’t think we ever would have found these Thrush statues without his help. This was a good moment, vindication for a failed attempt in January. 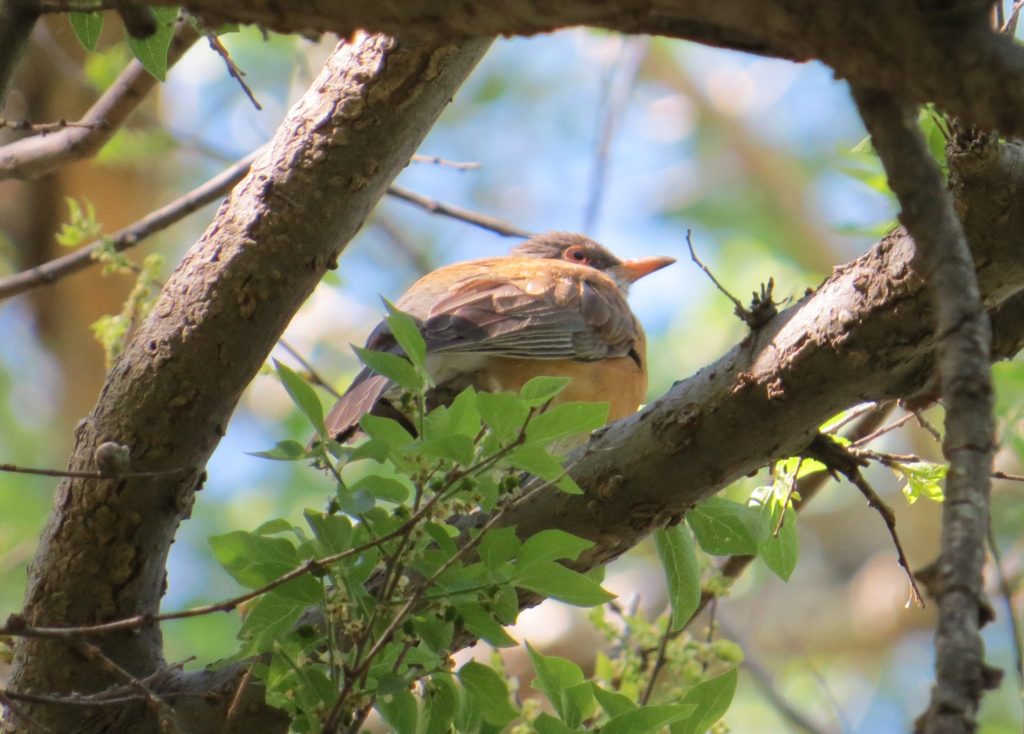 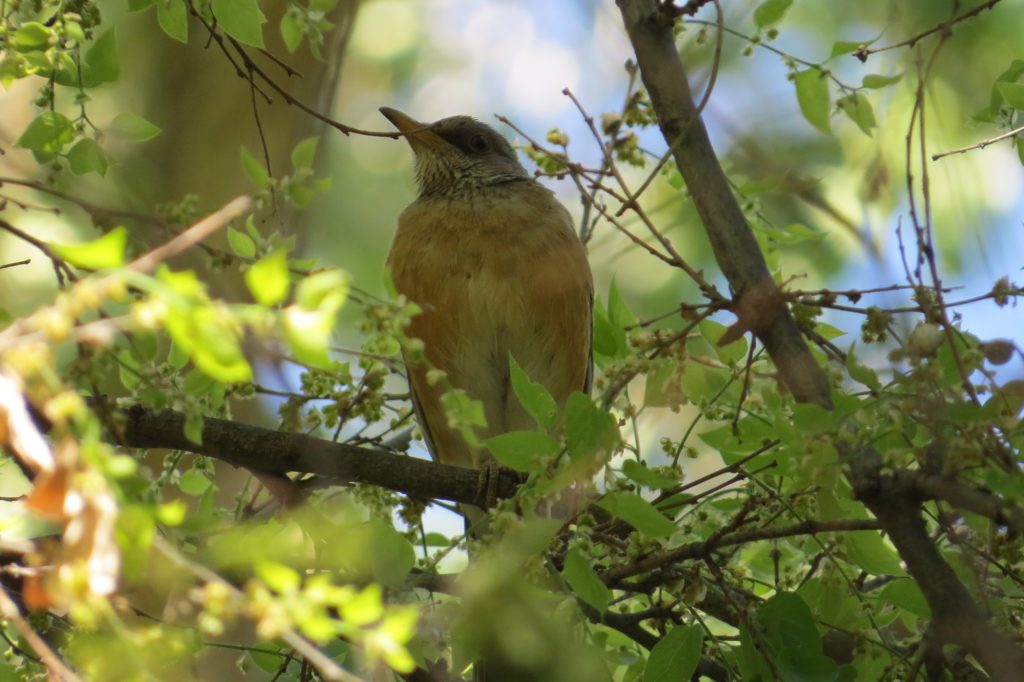 After Santa Gertrudis it was on to the De Anza Trail at Tubac to look for some Rose-throated Becards. We were all going in blind. We didn’t really know where to look in the towering Cottonwoods. Like the Wren, it was a bust. We did walk away with more Gray Hawk sightings, however brief due to the limited sky windows in the canopy. A juvenile did provide one quick photo op. 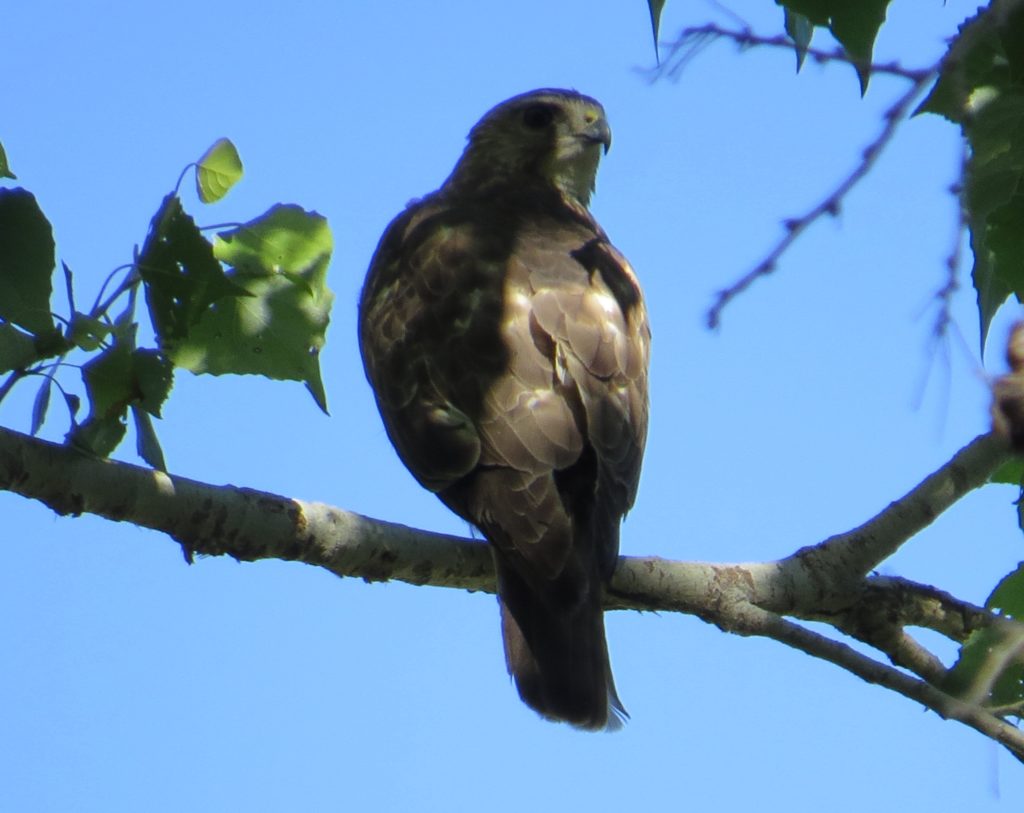 By this point in the afternoon, it was time we made our way to Madera Canyon. Not wanting to waste any burning daylight, we squeezed out every minute stopping briefly at Florida Canyon for Rufous-capped Warbler for Steve and Black-capped Gnatcatcher for both of us. Nada on those, but the effort was minimal.  At least a Black-throated Gray Warbler was an nice lifer bonus for Steve. Next up was a stop at Proctor Road to try one more time for the Gnatcatcher. We did find a Gnatcatcher that was more Black-capped-like that Black-tailed, but the waning daylight and the bird’s fidgety behavior did not allow us to clinch the key field marks for an ID beyond a reasonable doubt. The regularity of this species makes it highly likely that it will eventually land on my list, just not this day.

With darkness settling in, it was time for the night show in Madera Canyon proper. Almost immediately we heard the barking of Elf Owls. It was a lifer for Steve and a sought-after Owl do-over for me. My lifer sighting a few years ago was brief and poor. I had wanted a better photo (that showed eyeballs) of this Owl for some time. Finally. 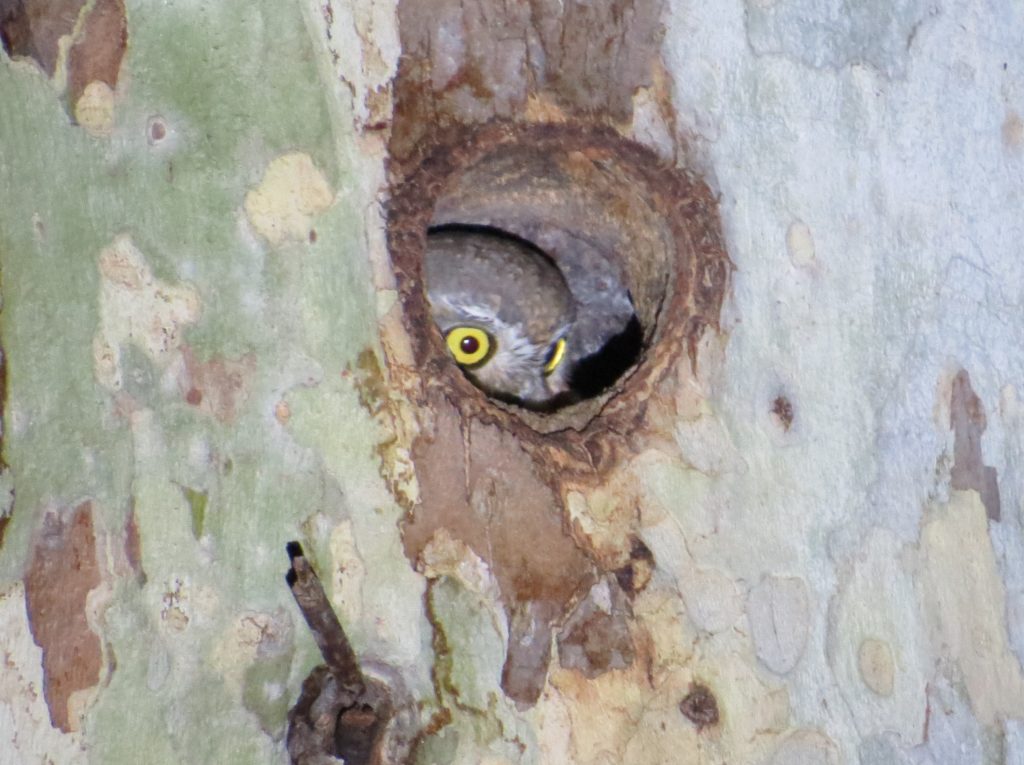 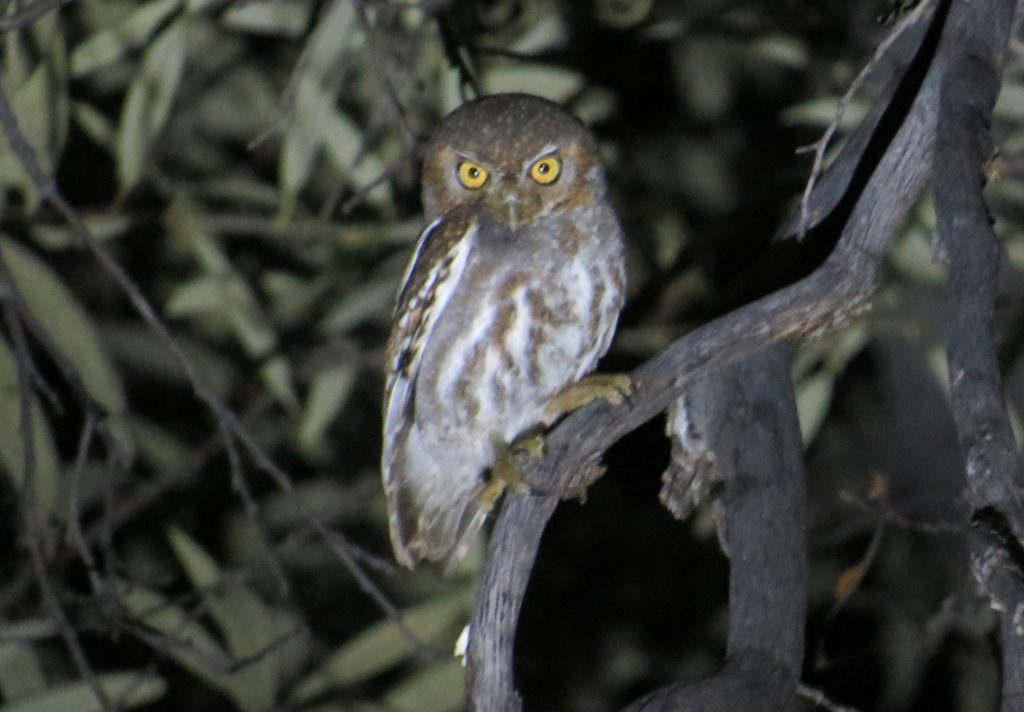 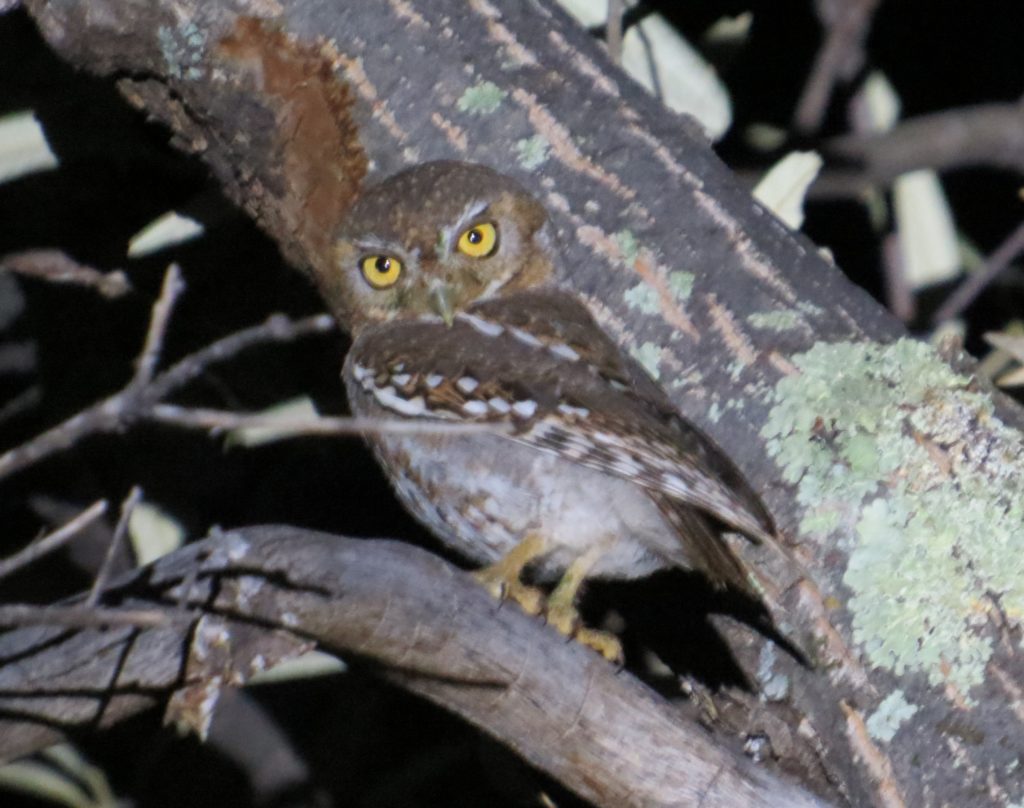 After enjoying the Elf show for some time, we Owled on for Steve. Lofty plans of looking for Whiskered Screech, Flam, and Spotted Owls collided with the reality of our extreme fatigue. We mustered enough energy to look for the easiest of those, the Whiskered Screech. Only one uncooperative bird was enough for us to be successful, but the brevity of the observation left a lot to be desired. But at this point, all we really desired was sleep. We drove on to Sierra Vista to spend the night so we could look for some reported Montezuma Quail at Ash Canyon B&B early the next morning.  Then it would be back to Organ Pipe to resume FEPO searching, or so we thought…