Flammulated Owl was literally and figuratively the number one lifer of the trip (see the last post if you missed it), but there were many other fun lifers that followed the Flam.  After all, one cannot go to Arizona and not come home with a few lifer souvenirs.  While I did not hit double-digits, I did snag some really exciting new ones.  One of these was a major target bird that I was just as eager to see as I was the Flam. Perhaps, though, the biggest (literally) lifer for me and the whole family was the Grand Canyon. 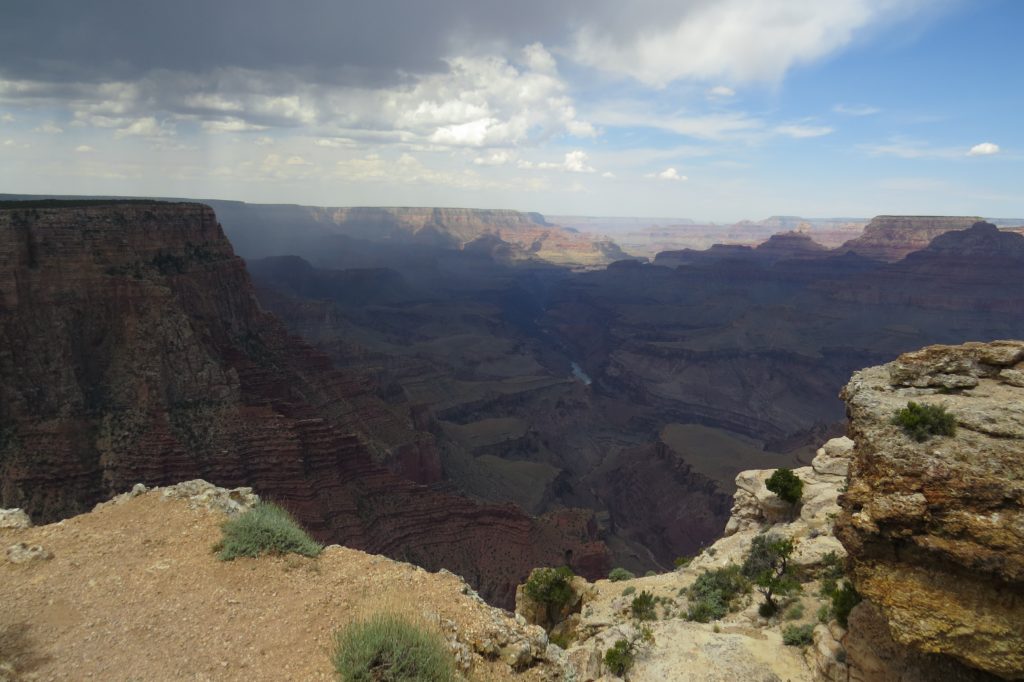 Technically speaking it was not a lifer for me as I had been here as a small child.  Since I have no memory of it and I have a family of my own who hadn’t seen it, the time was right for a visit. Plus, the visit to Grand Canyon National Park was completely FREE thanks to the government’s Every Kid in a Park program where each 4th grade student in America can get his/her entire family and vehicle into any national park all summer long at no cost.  The lack of entry fee was definitely the icing on the cake because this place is impressive regardless.  The grandeur of the Grand Canyon and how it makes you feel when you are standing next to that vastness is nearly impossible to describe in words and capture in photographs.  Hopefully these kids will at least remember the experience. 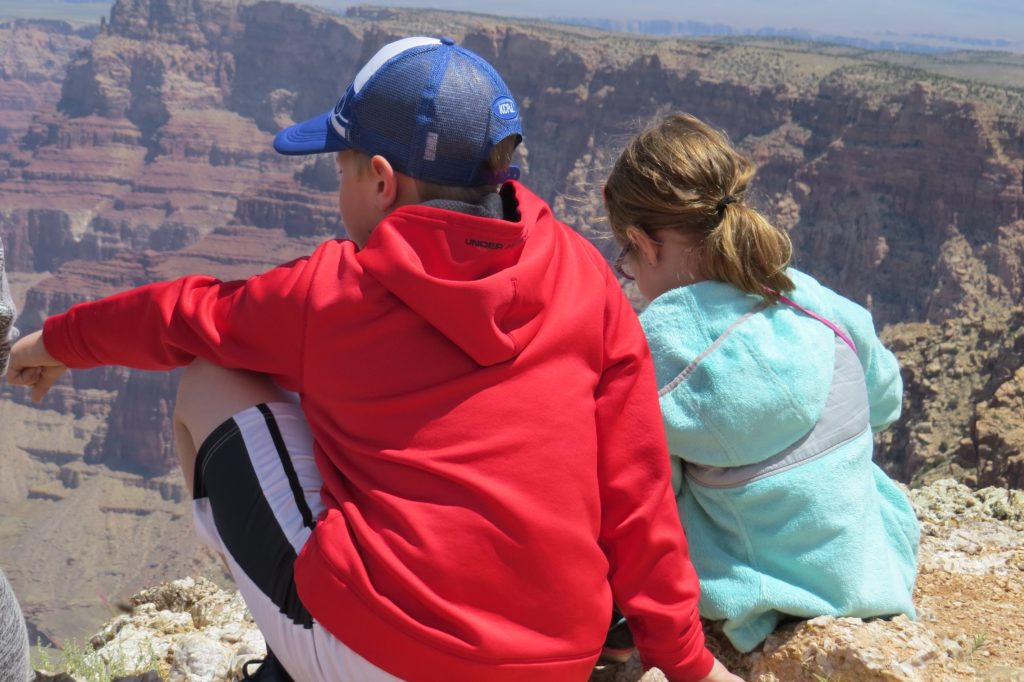 Tommy DeBardeleben joined us on the trip to the Grand Canyon.  Tommy was actually hoping to see a bird that I wanted to see, the California Condor.  The California Condor was reintroduced to the Canyon in 1996 and has done well there since.  Over 70 birds are in the Utah/Arizona population with many of them frequenting the Canyon.  Tommy had seen them here many years ago.  Unfortunately they were not a “countable” bird when he saw them because they were still in the early years of reintroduction, so Tommy technically did not have California Condor on his official life and state lists.  Neither did I, so as we enjoyed the Canyon at every possible pull-off, Tommy and I were always watching the sky above and below(!) in an effort to find this bird.  Unfortunately we never had any luck.  Later that night we learned one had been seen on the cliff face right beneath Bright Angel Lodge less than an hour after we had looked at the very same spot. Argh. The good news is that we were so impressed with the Canyon that we will be back some day.  The Condor can wait until then.

There were, of course, other potential lifers for me at the Canyon.  I did see one, the Juniper Titmouse, fly across the road in front of me.  It wasn’t until the drive back on US-180 to Flagstaff that I actually got to see one well and photograph it. 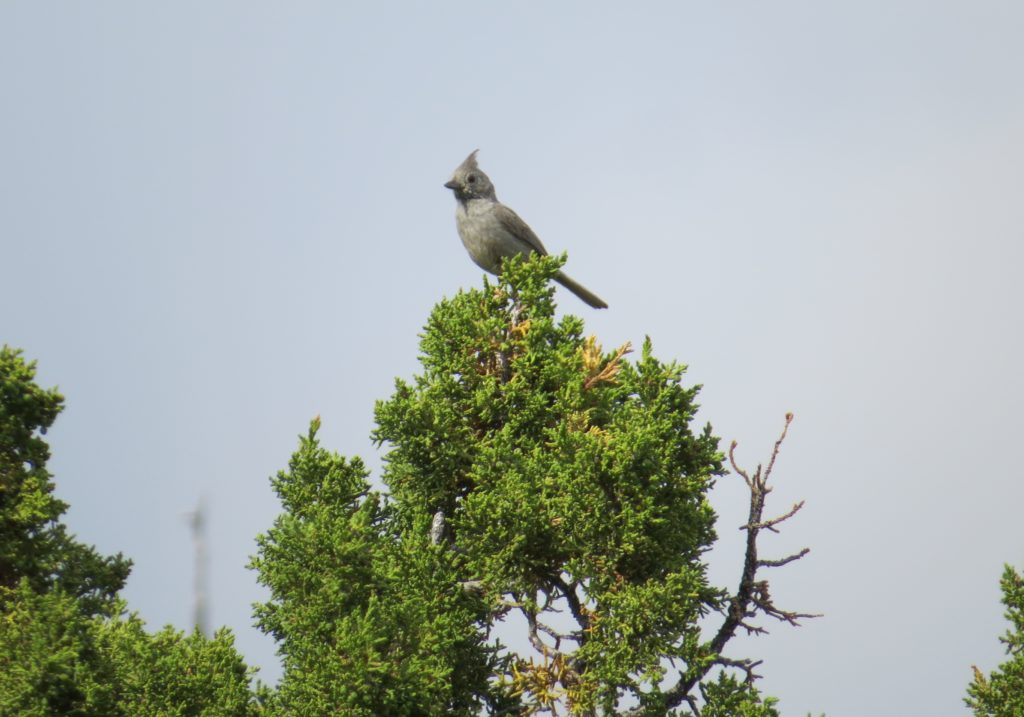 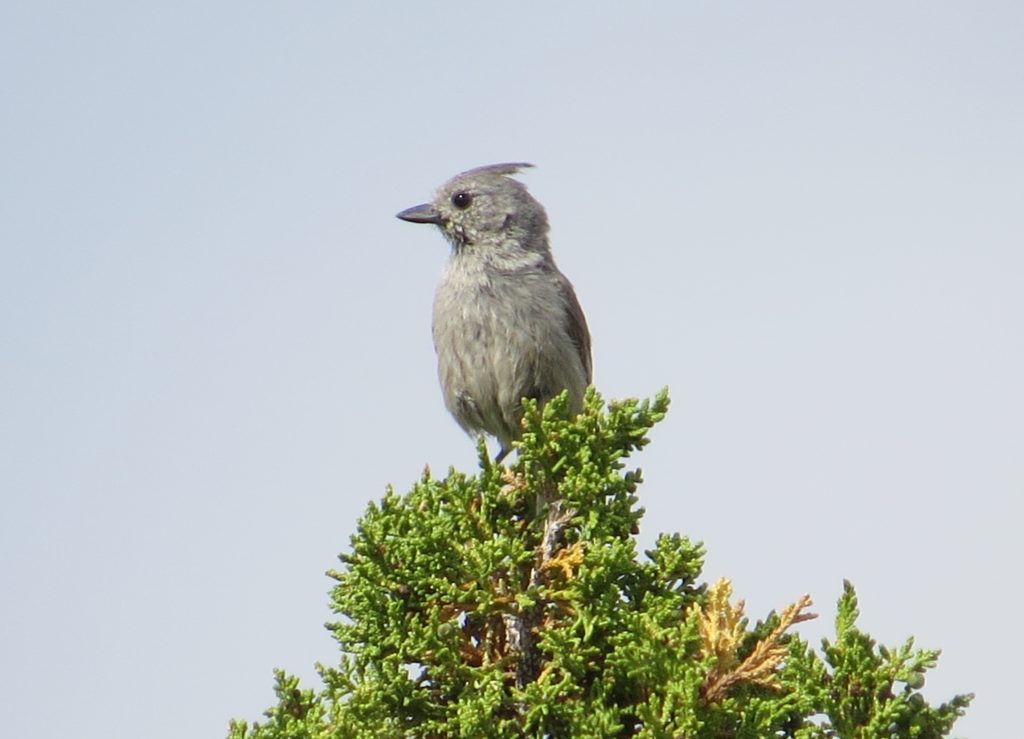 Tommy found me this bird while we were stopped for a different lifer.  As I had been driving I knew to be vigilant for Pinyon Jays.  There were a couple times while cruising at highway speeds that I thought I saw blue-colored birds cross the highway, but with no shoulder on which to pull off, I couldn’t stop to check.  All doubt was erased at one point, though, when several blue-colored birds were flying across the highway in groups.  I found a spot to pull over and observe my lifer Pinyon Jay.  Photographing them proved impossible as the birds were between me and the sun.  They also hid remarkably well in the junipers, only giving away there presence as they flushed away.  This happened over and over as we probably saw over 50 in all, flushing in small groups.  It was frustrating but still fun to see the behavior of this bird and hear its fun, laughing call. 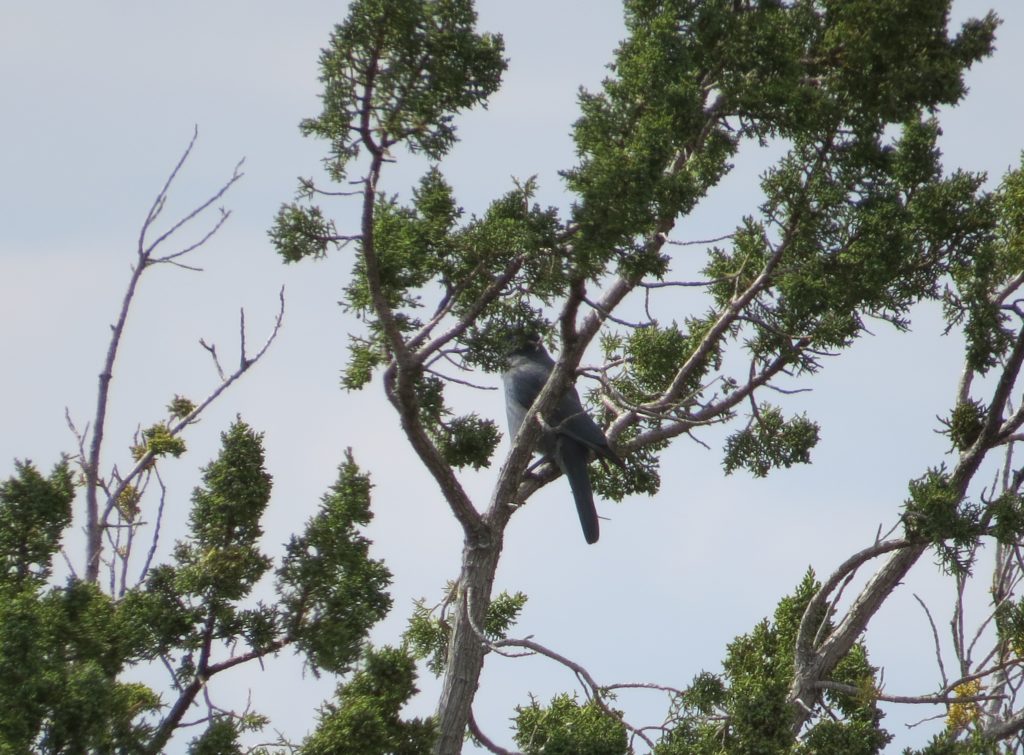 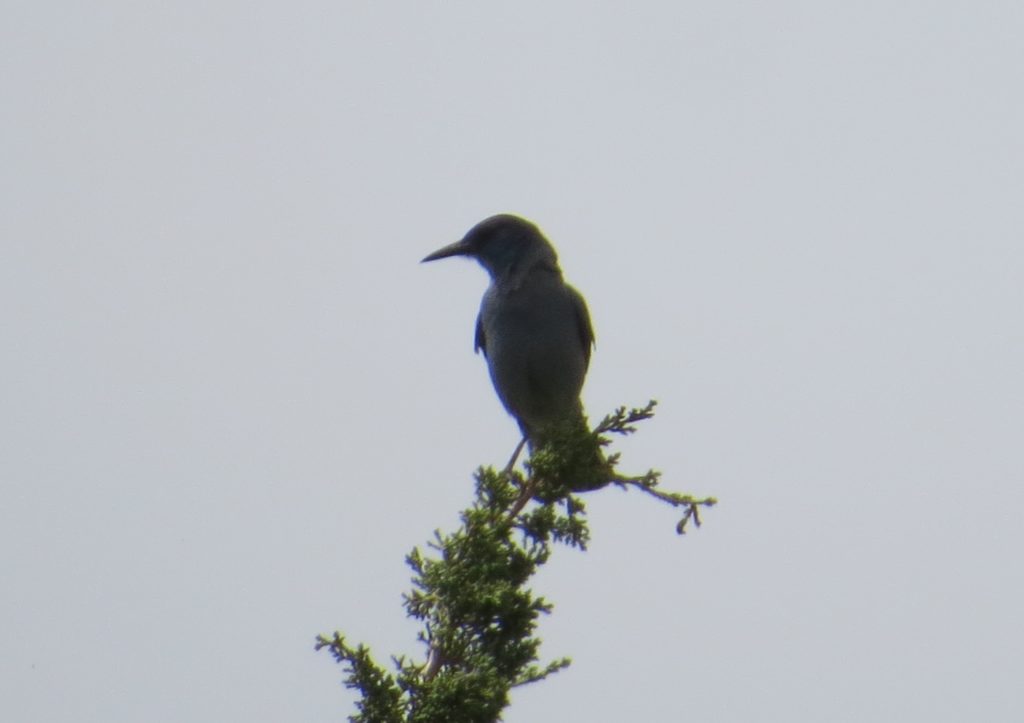 The morning after the Grand Canyon adventure, Tommy and I birded the Flagstaff area hitting up Elden Springs Road and the Schultz Pass Road. The birding was incredible, but since this is just a lifer post, we’ll stick to those. The first lifer was the Grace’s Warbler, a striking bird that loves the Pines. 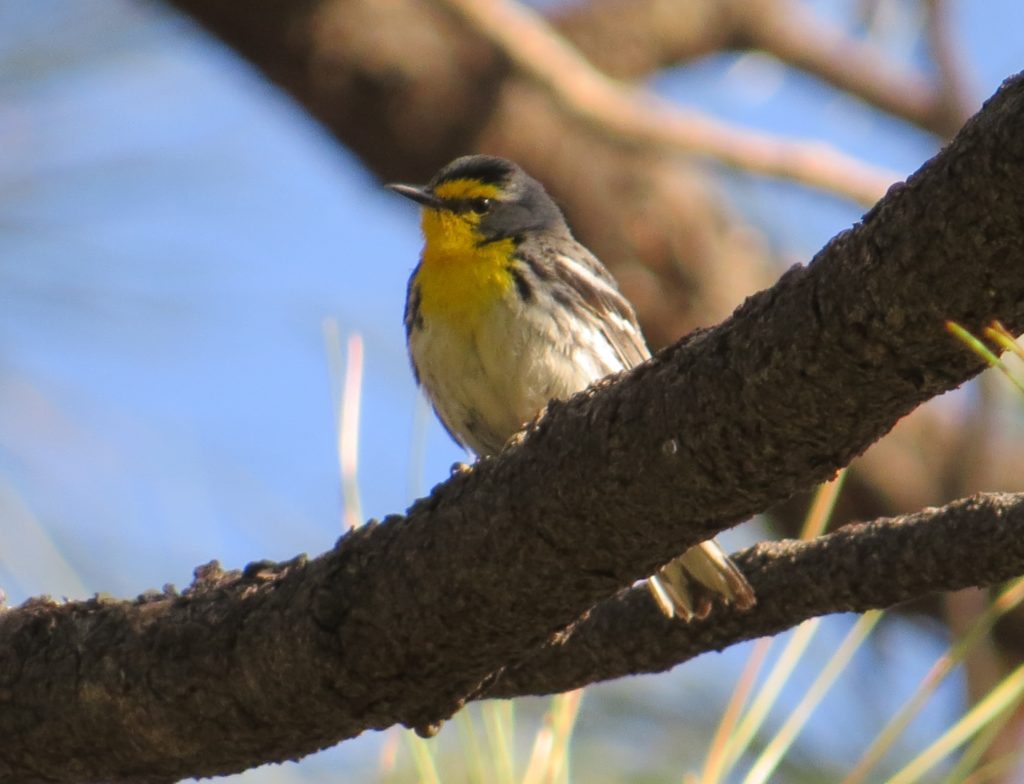 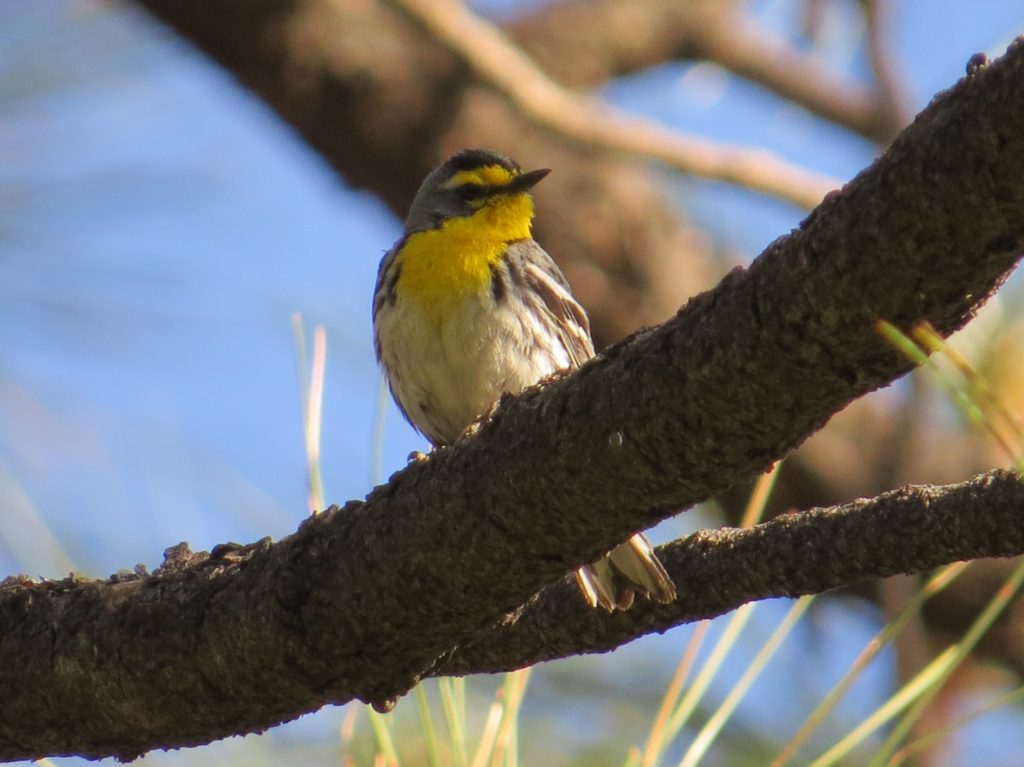 While lifering on this bird, I simultaneously lifered on Plumbeous Vireo.  This is another bird that loves life in the Pines.  Both my new lifers could be heard and seen at the same time, sometimes even in the same tree! 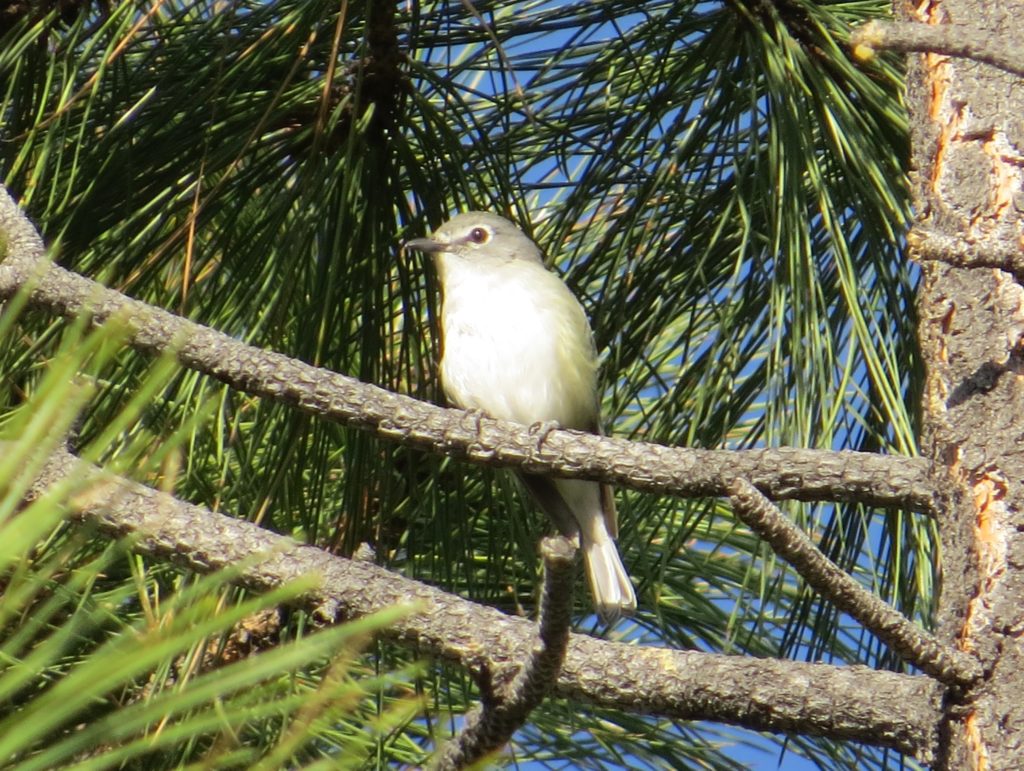 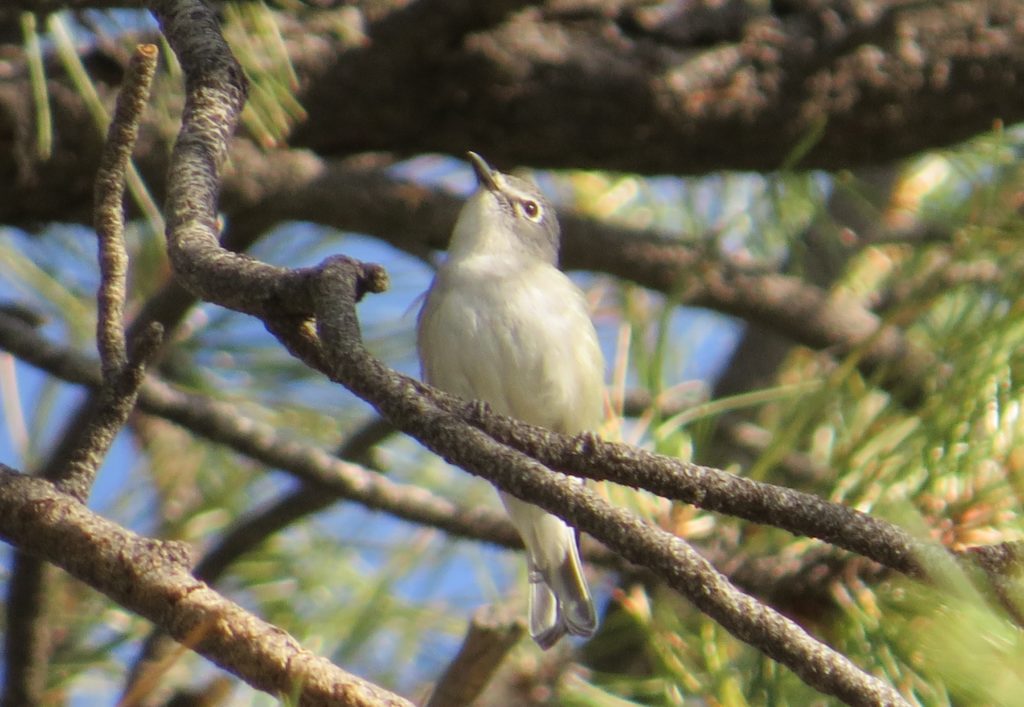 Elden Springs Road merges on to Schultz Pass Road, which was a reported location of numerous individuals of the bird I wanted to see most, the Red-faced Warbler.  Tommy had me stop at a spot that looked like good habitat for this warbler–dense stands of Douglas Fir on a slope next to a somewhat open area of Aspens.  Sure enough, Tommy picked out a singing Red-faced Warbler almost immediately.  As we were trying to get visuals on it, Tommy spotted another lifer for me and one I had been hoping for–a male Williamson’s Sapsucker! Even though the Red-faced Warbler was my most wanted bird after the Flam, we know that would be a relatively easy bird along Schultz Pass Road.  Therefore, we ditched the Red-face we had been hearing in an effort to track down the dapper and somewhat elusive Sapsucker. It sure was a tease at first and not offering up much to view. 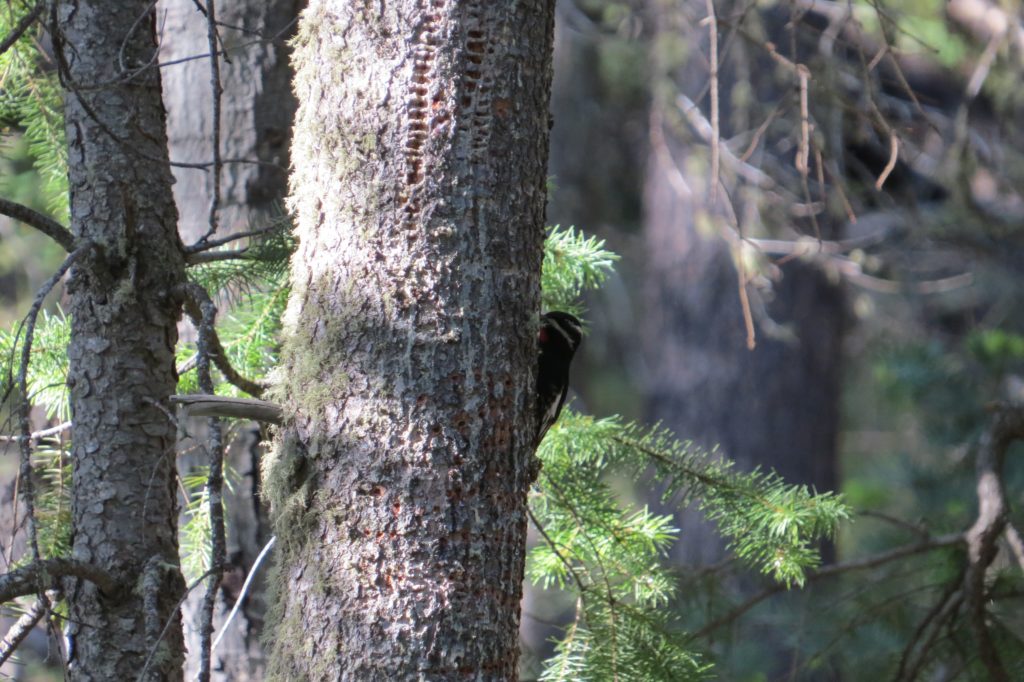 Eventually we got the full monty as it was too busy drilling sap wells to care about a couple of gawkers. 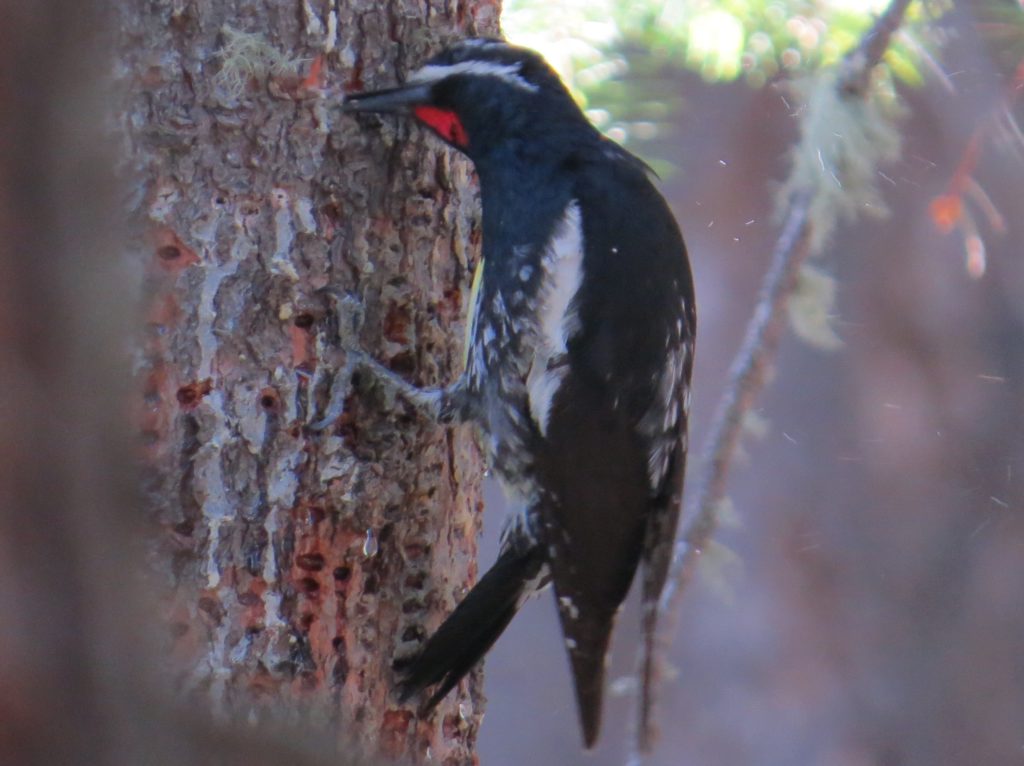 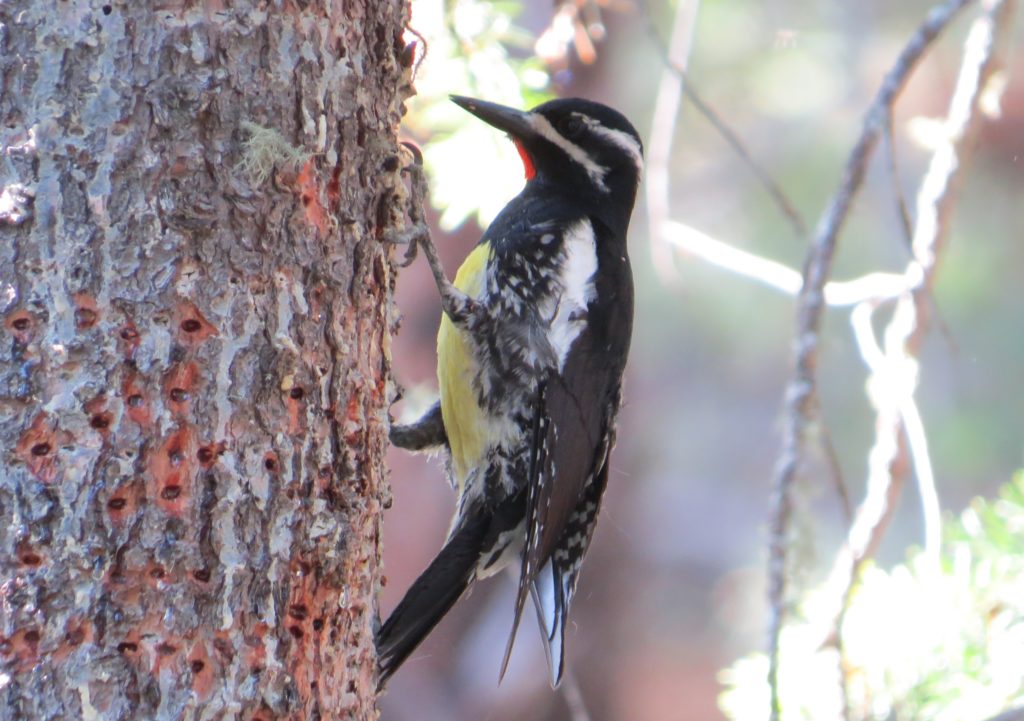 Once the Williamson’s was fully enjoyed, we turned our attention to the Red-faced Warbler.  I was highly impatient to finally see this bird that we were hearing.  And then it finally happened, and it was glorious. 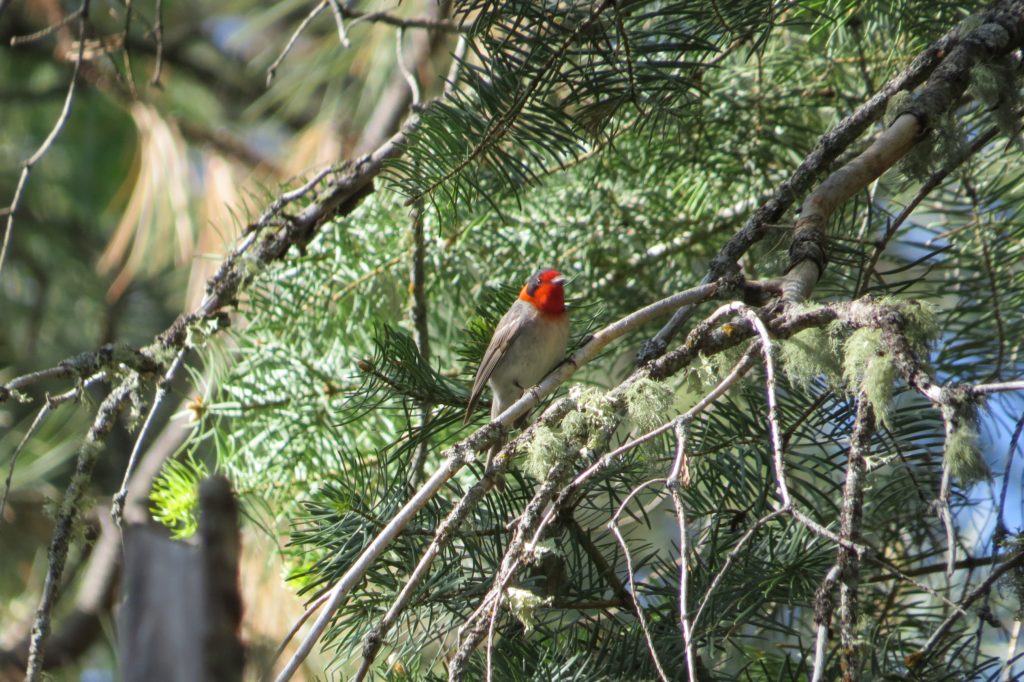 Adding to the pleasure of finally seeing this bird is that Red-faced Warblers are curious and therefore crushable. 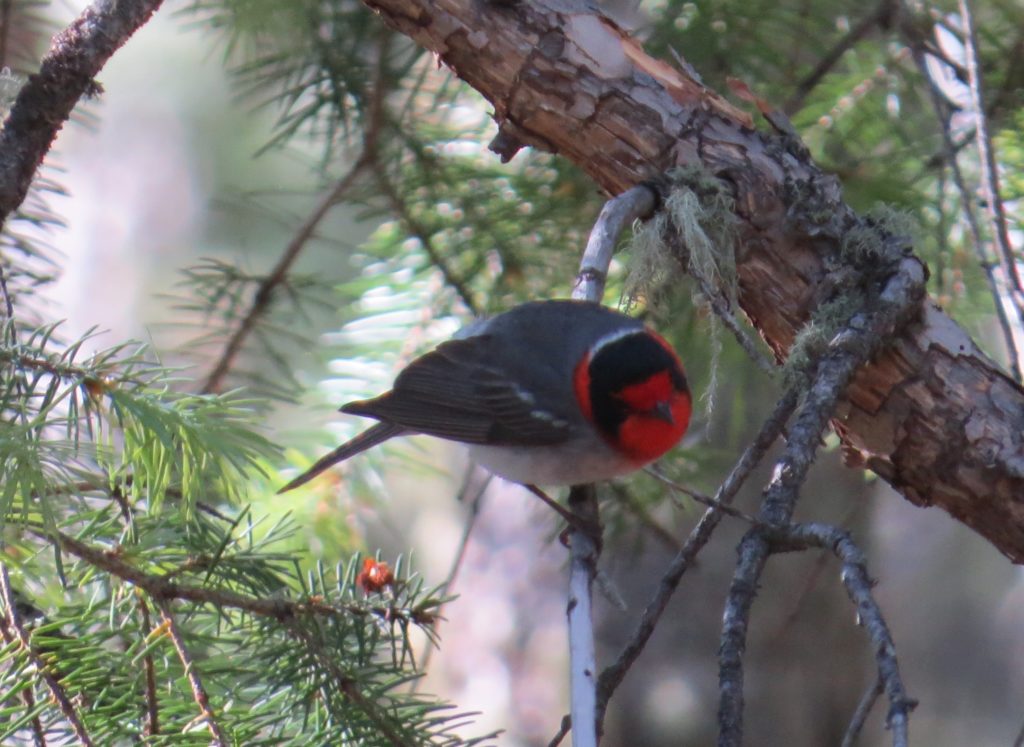 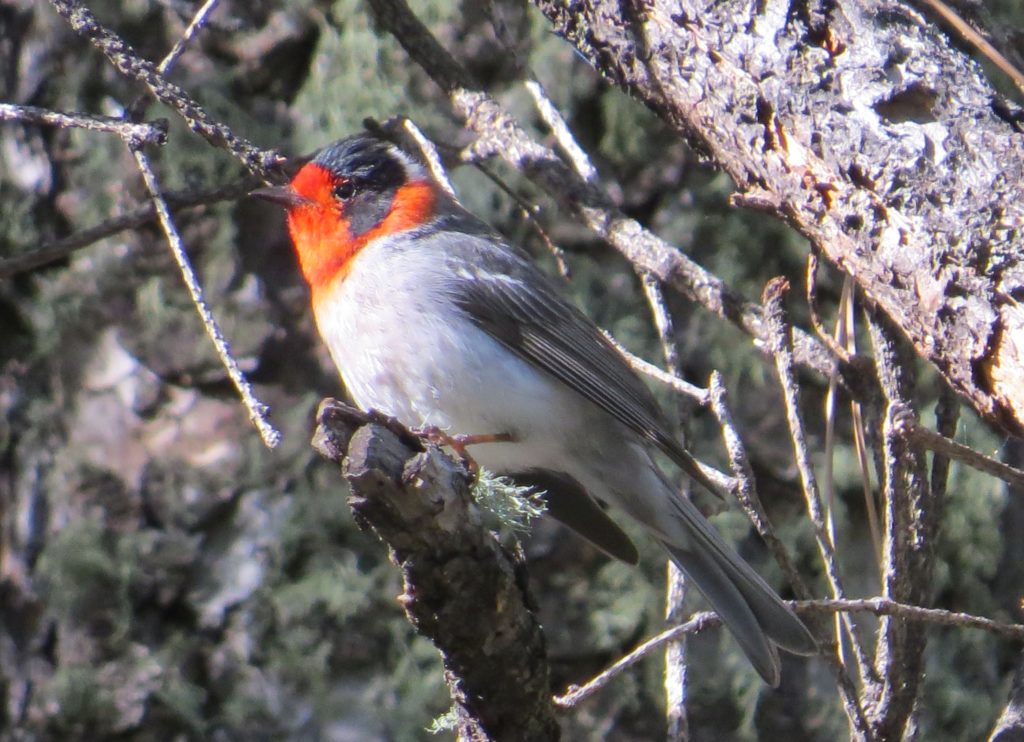 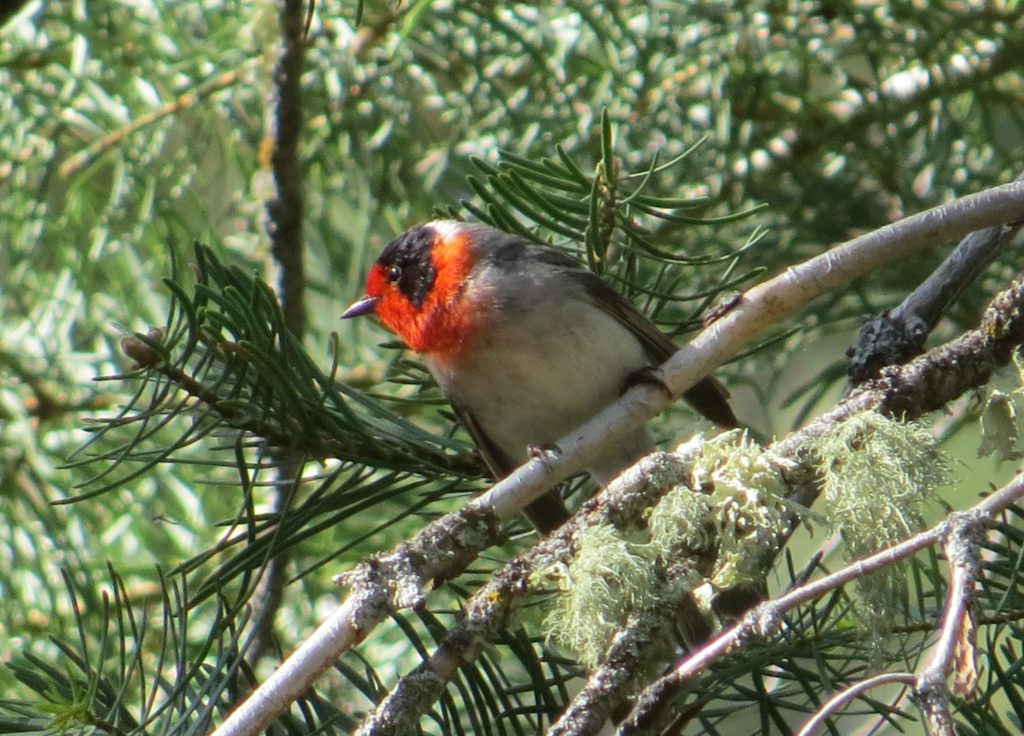 By the time we were done birding Schultz Pass Road, we had seen several of these Warblers.  Each was just as exciting as the last.  Even Tommy has to stop and look at each one, they are that captivating. 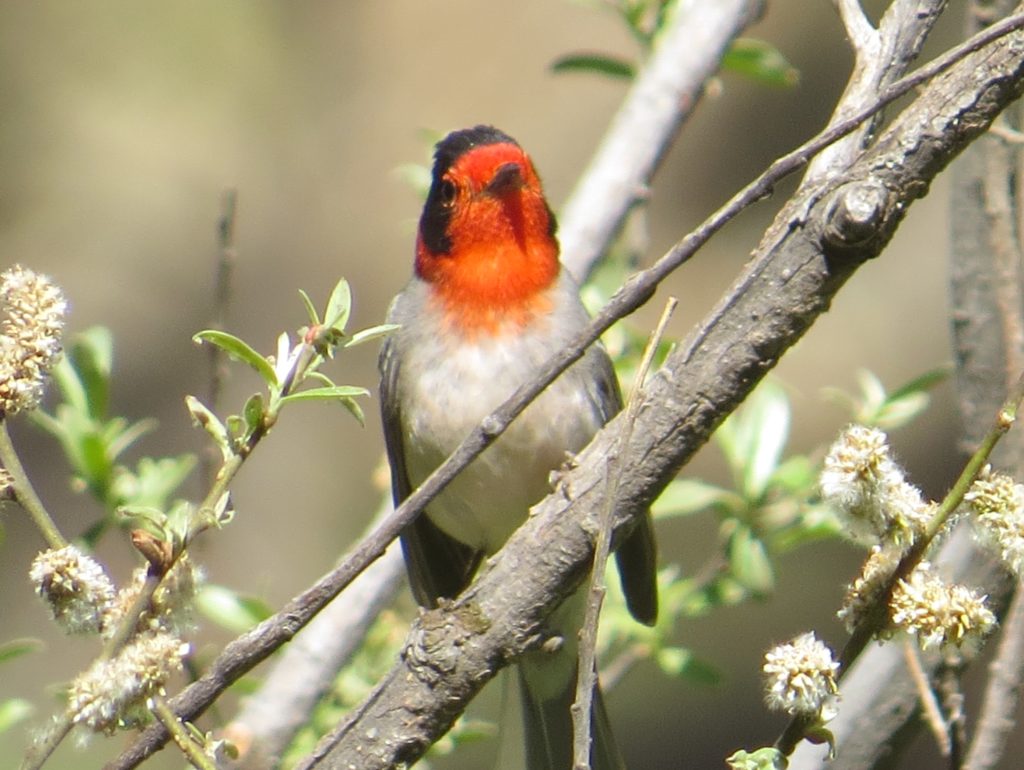 There were no more lifers on this morning of birding around Flagstaff.  Tommy and I had found all my targets with relative ease, and there was really nothing left to go after.  I’m kicking myself for not doing more research because MacGilivray’s Warblers breed in the area by Hart Prairie which is just northwest of Flagstaff.  Oh well, something to add to my northern Arizona to-do list next time we come back to view the Grand Canyon (and the California Condors!)

My last hope for lifers on this trip would occur on our drive from Flagstaff back to Phoenix.  We were able to take a leisurely drive south since we were overnighting in Phoenix and didn’t have to catch a plane until the next day.  So instead of hopping on I-17, we drove through Oak Creek Canyon and Sedona.  Oak Creek Canyon and the red rock formations of the Sedona area are a must-see experience for anybody.  For the birders, there is even more to experience.  My list of hopefuls was short: Yellow-breasted Chat, Common Black-Hawk, and Brown-crested Flycatcher.

After scouring eBird, I had picked a spot caled the Encinoso Picnic Area as a place to look for the Chat.  It looked really small and held multiple birds–perfect for a quick search while a non-birding family waited in the car.  Evan’s 4th grader park pass got us into this National Forest Service fee site for free too (it works for all federal lands and not just national parks). Anyhow, when I stepped out of the car I heard the distinctive calls, croaks, and whistles of a Yellow-breasted Chat immediately.  And then I found a second and third equally loud Chat.  Getting visuals on any proved very difficult.  I did see one as it flew straight up out of the thicket it was calling from.  The yellow breast was as impressive as it was unmistakable.  Trying to find a perched bird was nearly impossible though. My family waited for nearly an hour in the air-conditioned car while I tromped through the picnic area picking up ridiculous amounts of painful, thorny grass seeds of some kind in my shoes.  And here is all I have to show for my toil: 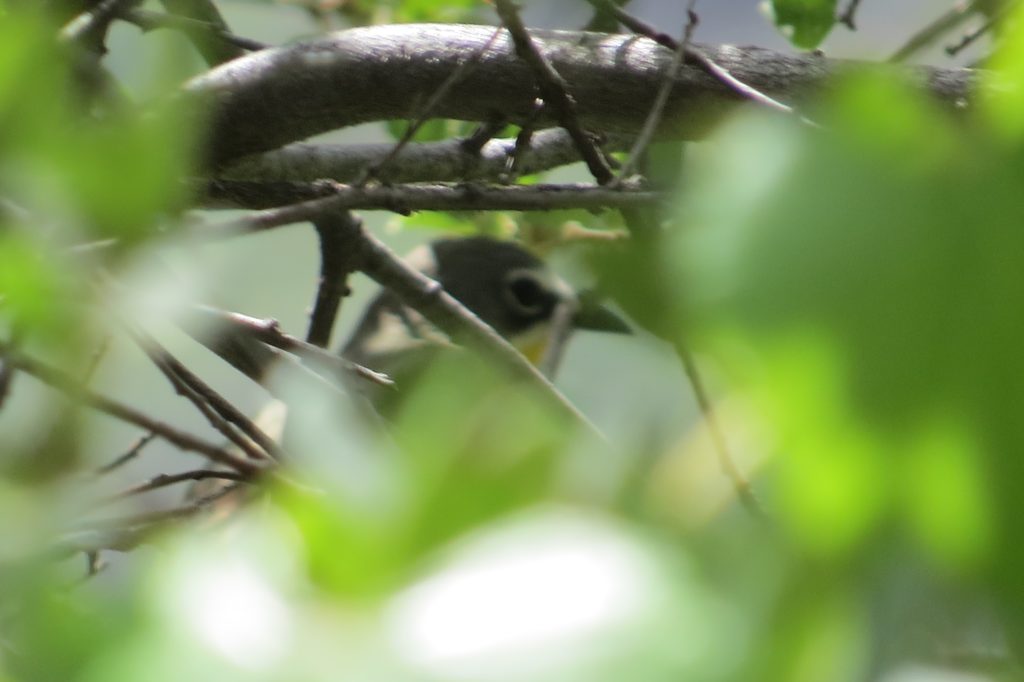 I’m not naive. I understand this is a typical experience with this bird species.  It was still frustrating.  At one point I could hear a Chat singing in the thicket right in front of me.  I figured it had to be perched on top somewhere.  So I climbed a rock, held the camera above my head, snapped a picture, and hoped for the best. Well, I got him. Can you see it? 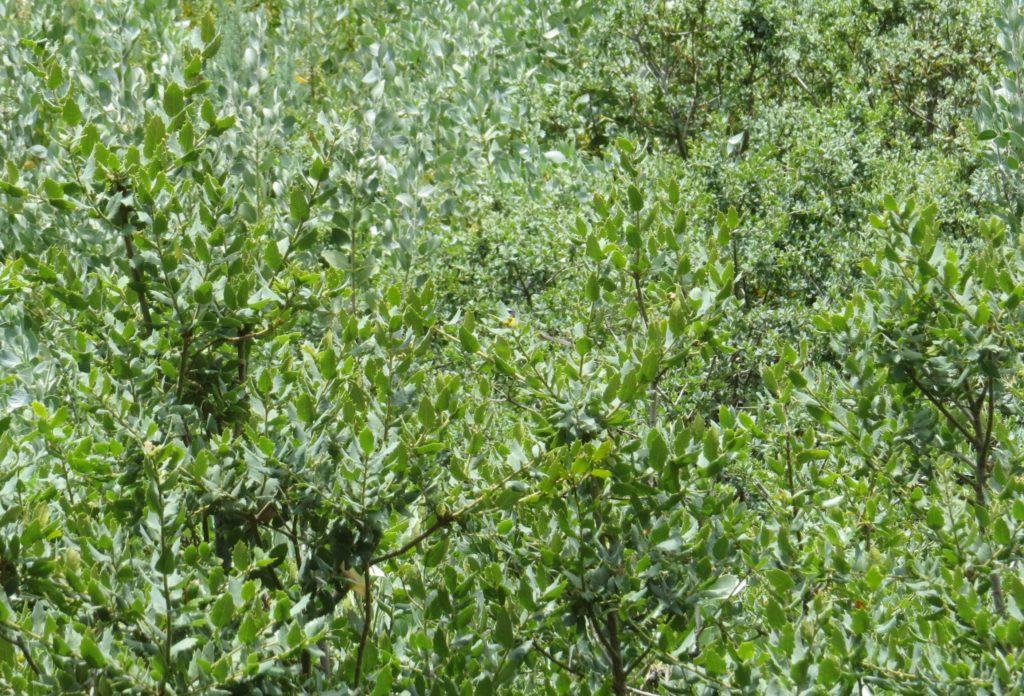 Here it is at a different perch.  Same effect. 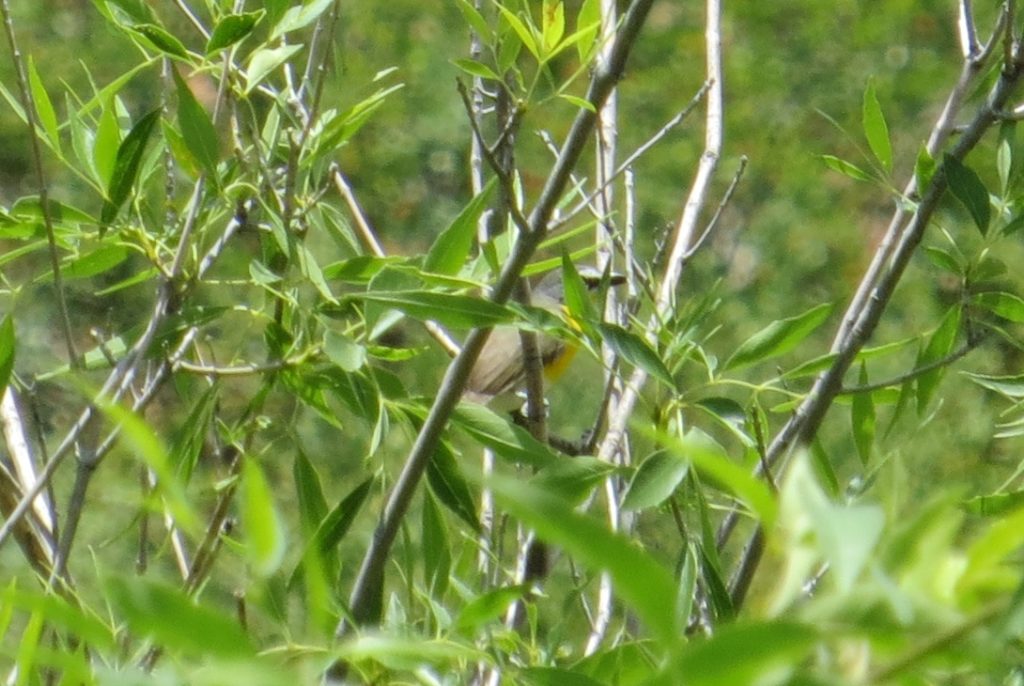 Yellow-breasted Chat is just one more bird to add to the list of ‘Better Looks Desired’ birds.  At one point I saw a Chat fly into a tree in the distance, and I saw a fleck of yellow among the green leaves, so I just snapped photos of that yellow spot like crazy. Turns out I got a lot of photos of a yellow leaf instead. What an aggravating bird. 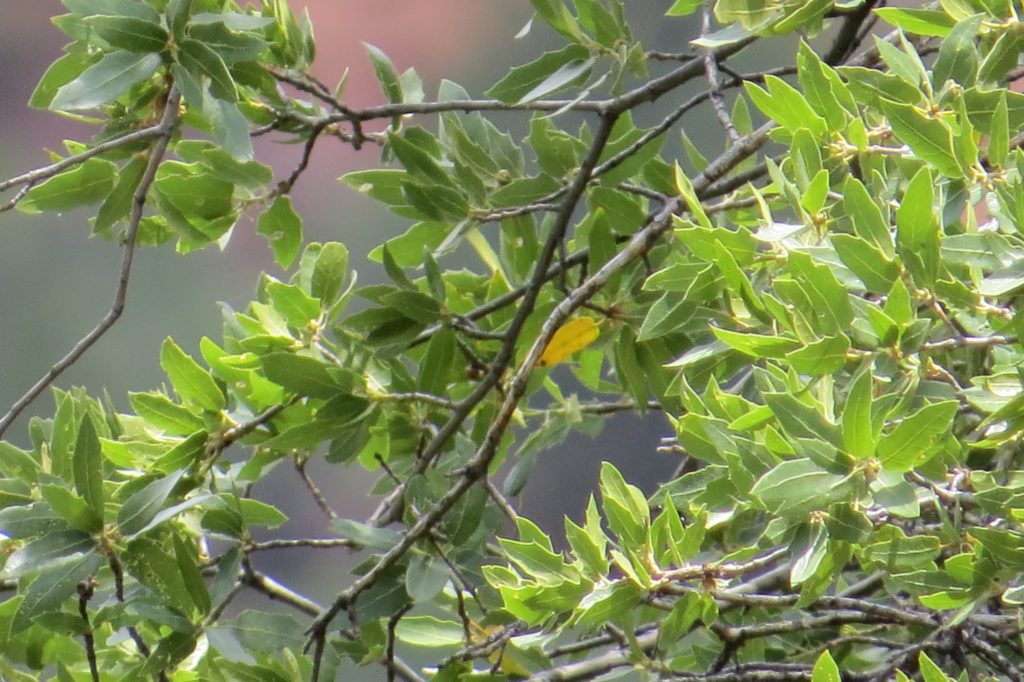 As we continued our drive to Sedona enjoying the views of the canyon walls from the bottom of Oak Creek Canyon, we decided to pull into the National Forest Service’s Grashopper Point recreation site.  This was another fee area that we got into for free–thanks Evan.  The draw of this site is that people like to cool off in Oak Creek here. More specifically, people cliff jump off a high rock face into a 15-foot wide creek below! Apparently this narrow creek is quite deep, allowing the people we saw jumping to come out unscathed.  We did not attempt it. I was not completely sold on its safety. 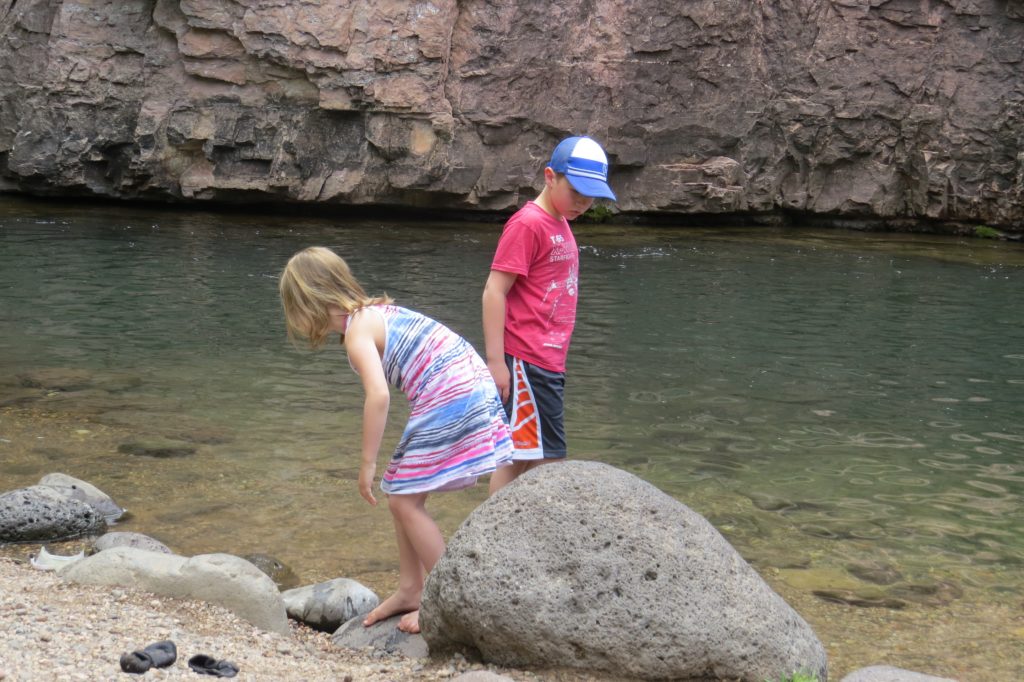 The deep part of the water is quite narrow as you can see the wading area takes up almost half the creek width. This spot where Evan and Marin are wading is where teenagers were jumping into the water from 15-20 feet up the rock face!  As I kept an eye on my kids, I also kept an eye out for a Common Black-Hawk in the riparian corridor.  Unfortunately one never materialized.  I was also keeping an eye and an ear out for a family of Brown-crested Flycatchers that had been reported here. I had actually given up on them too, but seconds before we got in the car to leave I spied a silent flycatcher on top of a snag a long ways away.  I snapped some photos and was pleasantly surprised to see I had captured my lifer Brown-crested Flycatcher! 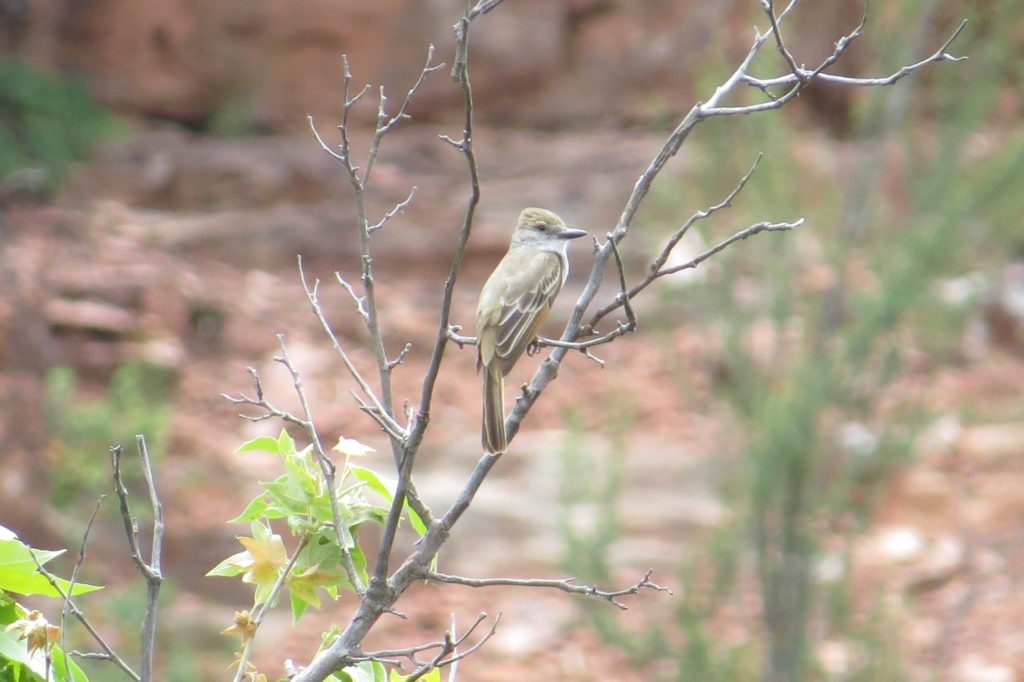 The Brown-crested Flycatcher is distinguished from the similar-looking Ash-throated Flycatcher which inhabits the same area by its larger bill, completely rufous tail underneath, and a brighter yellow belly.  Thankfully, this Flycatcher turned around to make sure I could see all the appropriate field marks. 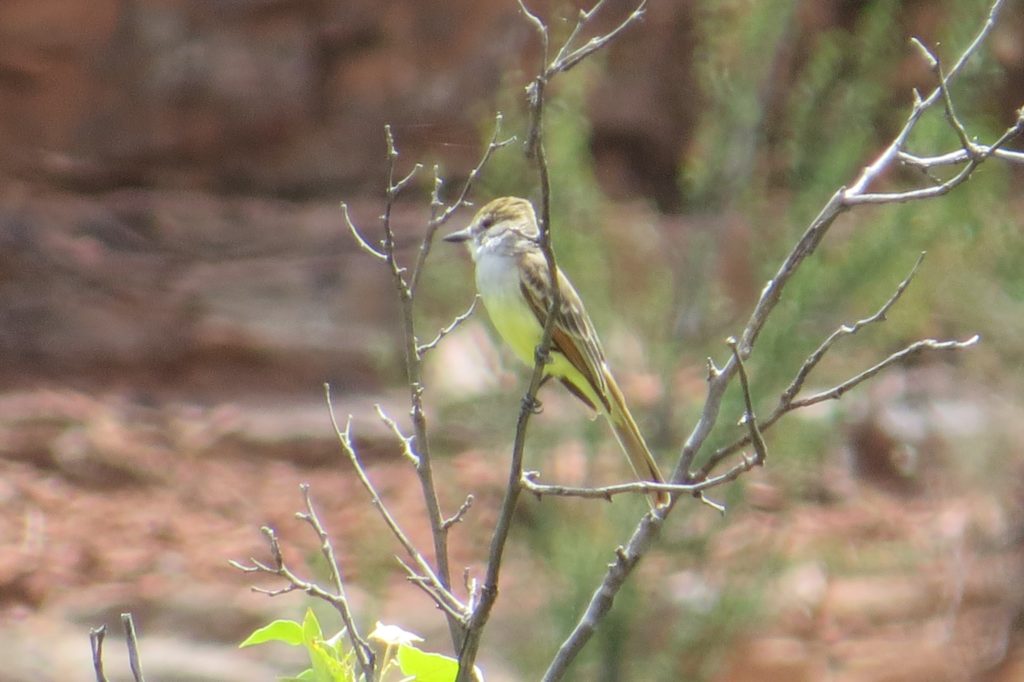 The lifering on this fifth trip to AZ was definitely a quality over quantity sort of thing. And unless I make a summer trip to SE AZ, the lifering will be significantly limited on subsequent trips to visit my parents in central AZ in the winter months. Regardless of lifers being available, good birds can ALWAYS be had in Arizona.  In the next post, I’ll highlight my favorite non-lifers from this most recent trip.

4 thoughts on “2017 Summer Trip to Northern Arizona –The Lifers”