Over the years ABWCH has enjoyed its share of popular posts and survived tougher times of fickle readership through some real ho-hummers. Through it all, though, there has been a dedicated following that has stuck through posts of plenty as well as posts left wanting. Thanks, Mom. I’m kidding. There’s one more.  If you’ve read this blog at all, you have certainly seen a comment left by AMR, a.k.a. Adam Roesch.  As an actuary in real life, Adam brings an analytical skill-set to the world of birding not often seen.  He is a dedicated patch birder who, almost to a fault, birds exclusively at Coon Rapids Dam Regional Park on the Mississippi River.  Even as potential life birds fall all around him, he opts to bird CRDRP instead of chasing those lifers, hoping to up his patch total, find a rarity, or just document the general avian goings-on there.  Should he ever dump his detailed data notebooks of years of observations on eBird, the system would likely get overloaded and crash.  More than once Adam has offered to show me his beloved spot. Given that it is at least a two hour trip for me and my desire to tone down the chasing, I told him I had to be really selective about the long-distance trips I make. It would either have to be a side trip of convenience if I was in the area or an exclusive trip for a highly compelling reason. So here’s what I told him nearly two years ago: 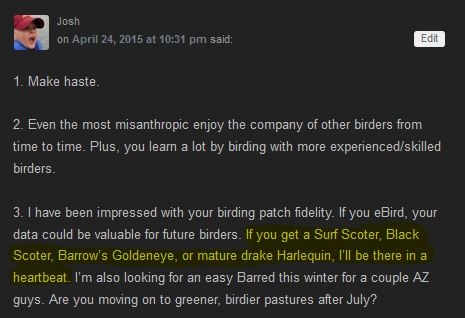 Since that comment was written, I have knocked off all those ducks but one–the Barrow’s Goldeneye, a bird considered casual in Minnesota occurring roughly every 5 years.  As I am getting to the end of my normal MN birds, BAGO was rapidly moving its way up to the top of the list of my most-wanted birds.  Last year I chased a female BAGO in Fergus Falls but failed.  This year there have been a couple other reports but nothing I considered reliable and therefore chaseable. Well, a little over two weeks ago, Adam Roesch birded at the Mississippi River in Champlin–quite aways upstream from his beloved patch–and made a stunning discovery.  Among the myriad of Common Goldeneye, Adam found and photographed a beautiful male Barrow’s Goldeneye. And with that find, Adam submitted his first ever eBird checklist.  Talk about an entrance.

Since the Barrow’s was a metro bird on a river that flows between two counties, the chasers and listers came in droves without haste. At the time, our family was an hour away at Evan’s swim meet in St. Cloud.  After the Sunday event, I dragged the family down the freeway to go to Champlin/Anoka.  At long last I got to meet Adam and his kids in real life as they tried to help me relocate the object of my desire. Of course, when a life bird is at stake, conversation and eye-contact are kept to a minimum as all such efforts are prioritized to the task at hand.  Adam and I parted ways quite quickly in a divide-and-conquer approach with the limited time I had to look.  I finally did have to pull the plug and cut my family’s losses on this unexpected 3-hour extension of their already long weekend.

In the interim, talk of the Barrow’s died down with some of the best birders not being able to relocate it in subsequent days.  But then, conveniently enough, there was a sighting that next Friday–a day before I was scheduled to go to my brother’s place in the Cities. Perfect.  The pre-planned trip was something the kids and I were going to do while Melissa was away for a fun weekend with some friends. After shuttling kids around to their respective activities that Saturday morning, we were eastbound.  Picking up a Meeker County Rough-legged Hawk (dark morph!) along the way was a good birding start to what was once a non-birding trip. 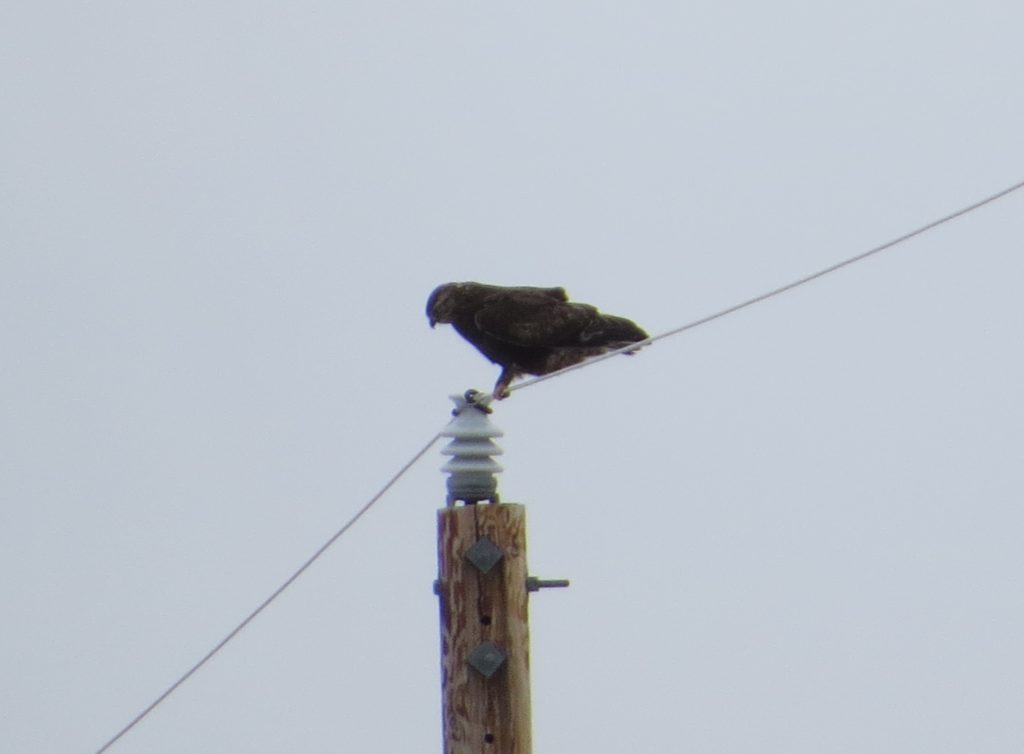 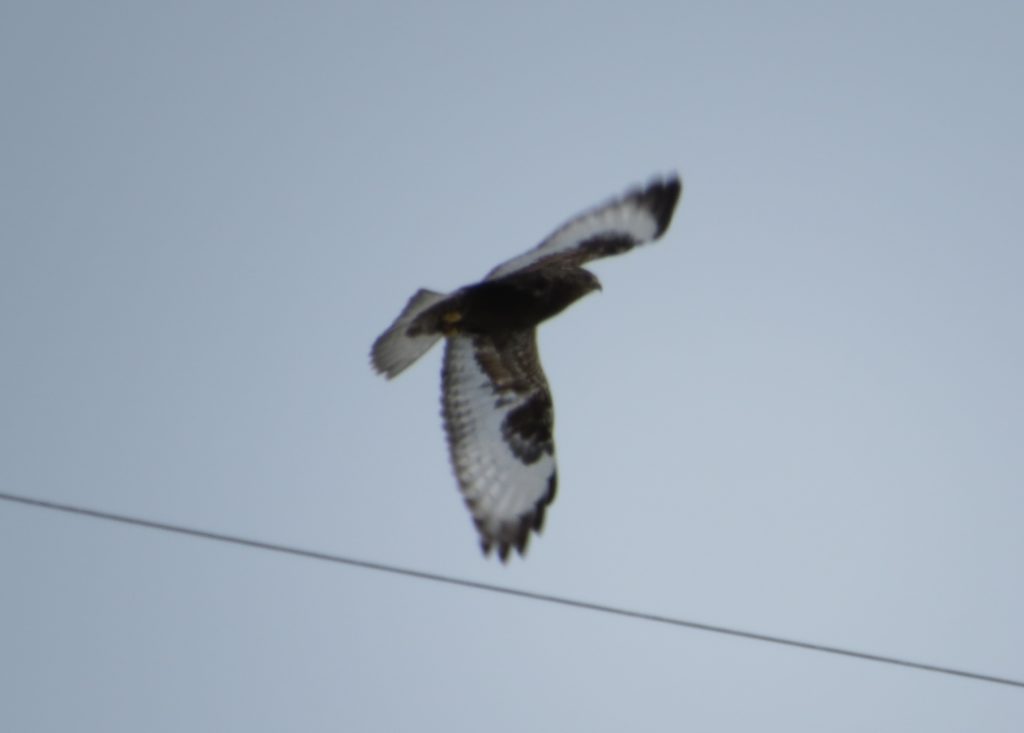 For the second time in as many weekends, we arrived at Anoka’s Peninsula Point Park to scan the Mississippi for the good Goldeneye. 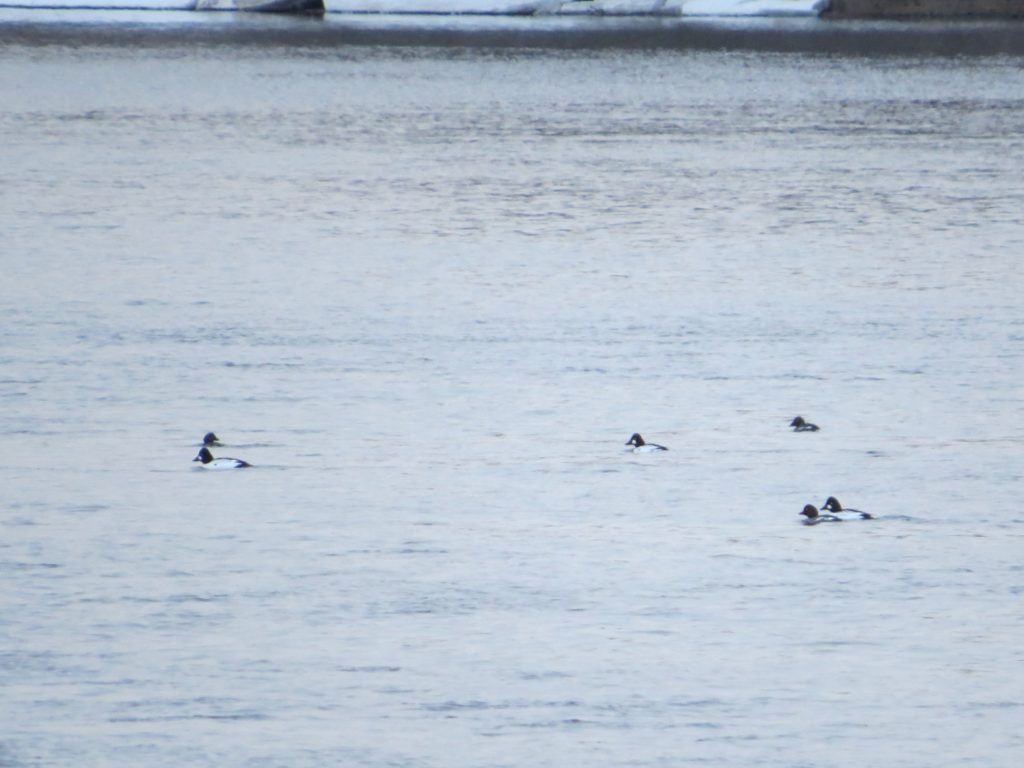 These are NOT good Goldeneyes.

I was joined by another reader and former life bird provider, Tony Lau.  While Evan and Marin played with a whiskey bottle they found with a bit too much enthusiasm, Tony and I looked and looked for THE duck. No luck.  I decided to head across the Champlin bridge to look for the duck on the Hennepin County side.  Just as I was about to take off, Tony waved me over with both arms. Yes! I hurried over and Tony got me on the duck with his scope as it swam upstream west of the Champlin bridge. The sighting was good enough to claim the lifer, but I wanted more.  Then to our horror, an Eagle came and scared it up sending it further west.

The kids and I drove across the Champlin bridge to see if we could relocate it. No luck. I gave the kids a reprieve by going on a hot chocolate run and then decided to try scanning the river one last time. It was Tony to the rescue again.  He had also come over to the Champlin side of the bridge and relocated the bird.  The low light conditions, distance, and nearly constant diving made it tough to find and keep track of.  Finally, though, I was able to latch on to this lifer with the camera. 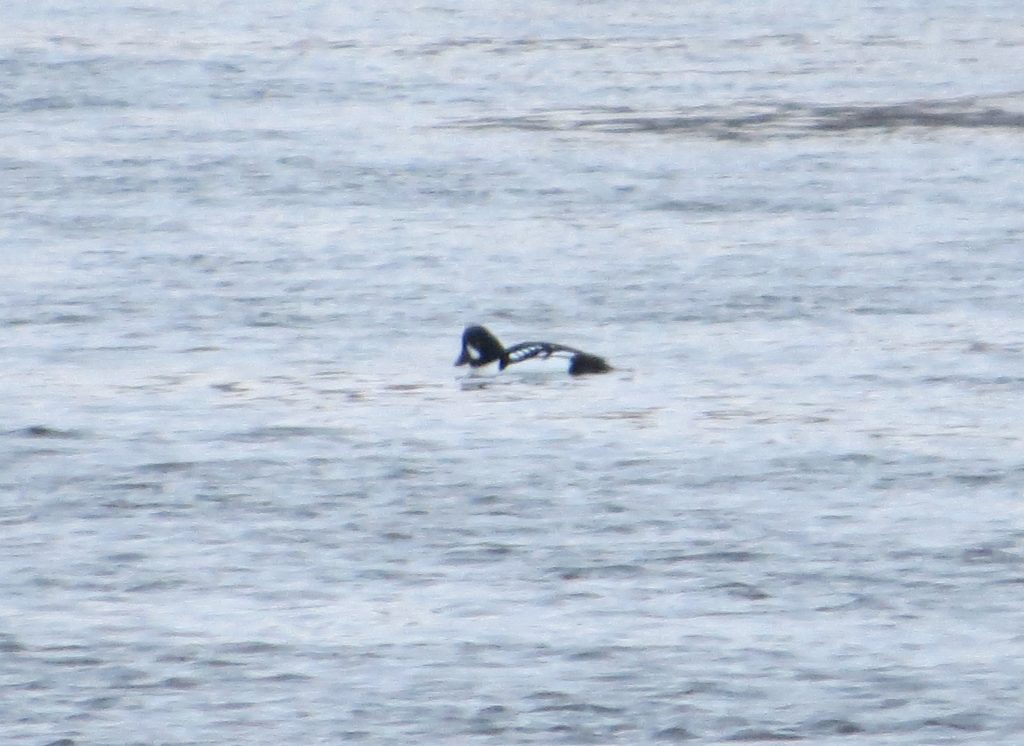 There’s just something that I absolutely love about getting duck lifers in the cold months. 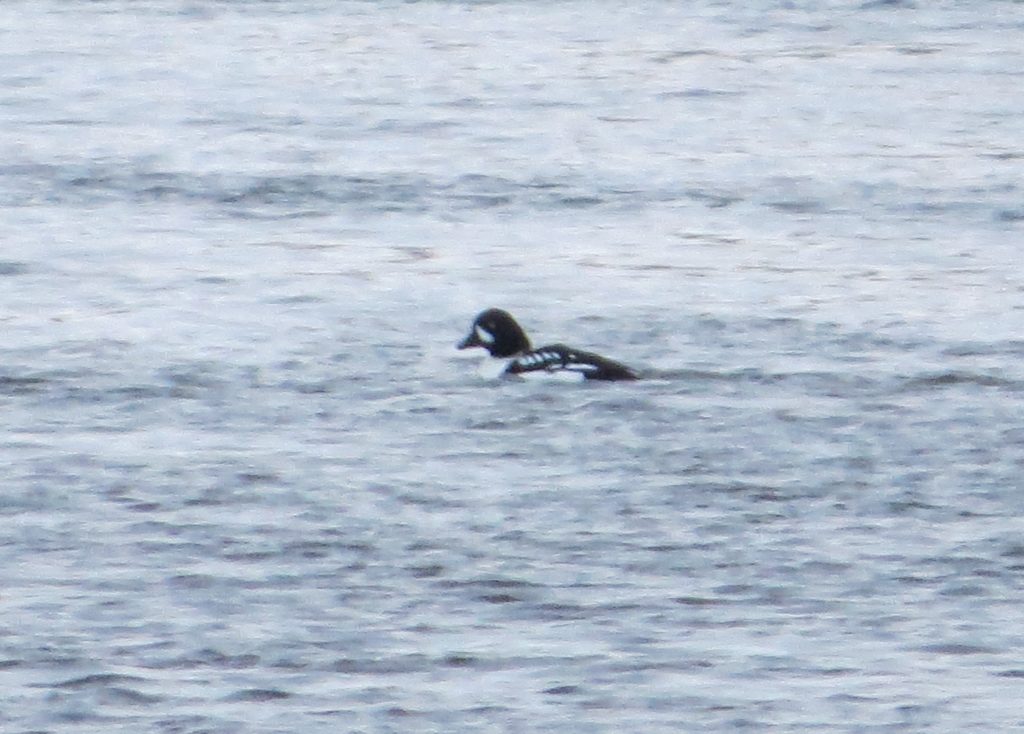 A huge ‘Thank You’ goes out to dedicated reader, Adam Roesch, for his incredible find. Getting lifers in Minnesota is a rare thing for me anymore, so this was a monumental addition. And if you’re reading, Adam, I’ll go ahead an put in my order for Red-throated Loon, Mew Gull, California Gull, mature drake Harlequin Duck, red-morph Eastern Screech-Owl, Northern Saw-whet Owl, Carolina Wren….

The birding for the weekend didn’t stop with the Barrow’s.  Since I was in town and a Snowy Owl had been reported, I decided to get my FOY SNOW.  Normally I wouldn’t chase a Snowy since I’ve seen them within a few minutes of my house, but my brotherr’s house was only ten minutes away from this one.  And besides, it chose the most unlikely of places to live, something I had to see for myself: 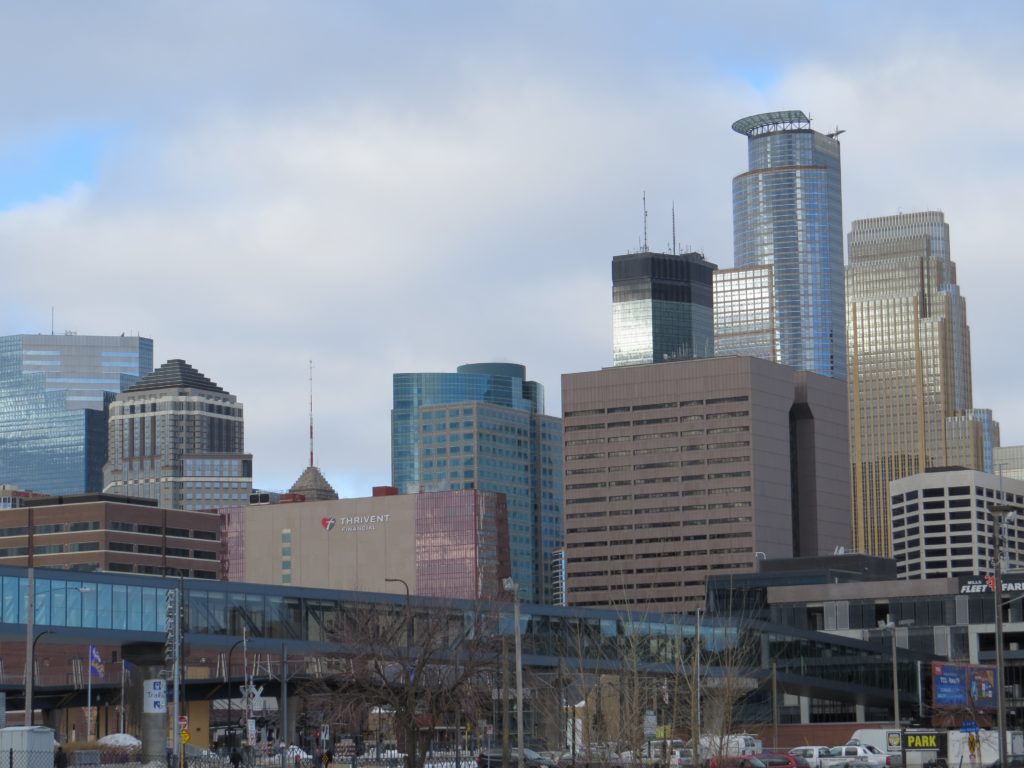 I’m not lying. This skyline view of Minneapolis is literally what this Snowy Owl can see from its bizarre winter territory.  I am used to looking for Snowies in urban environments, but nothing quite like this. Snowy Owls aren’t that hard to spot in places like this, yet I was having a hard time, a really hard time. I finally ran into another birder who clued me in to this sneaky Snowy’s hideout. 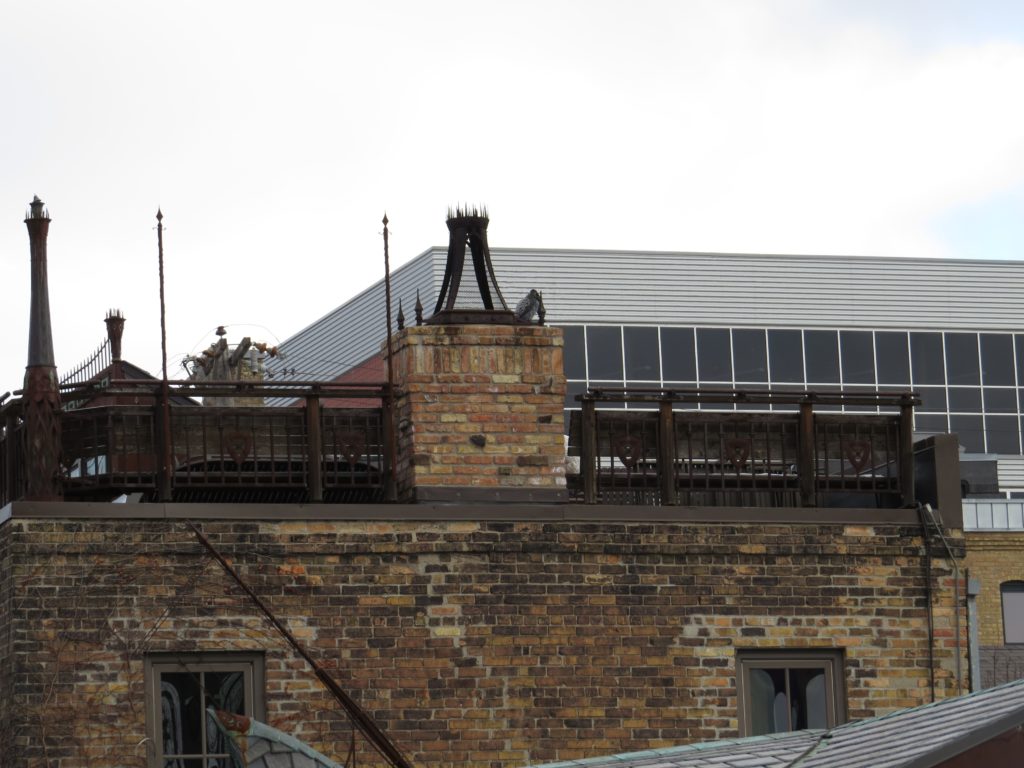 See it? Yeah, I didn’t either without help. 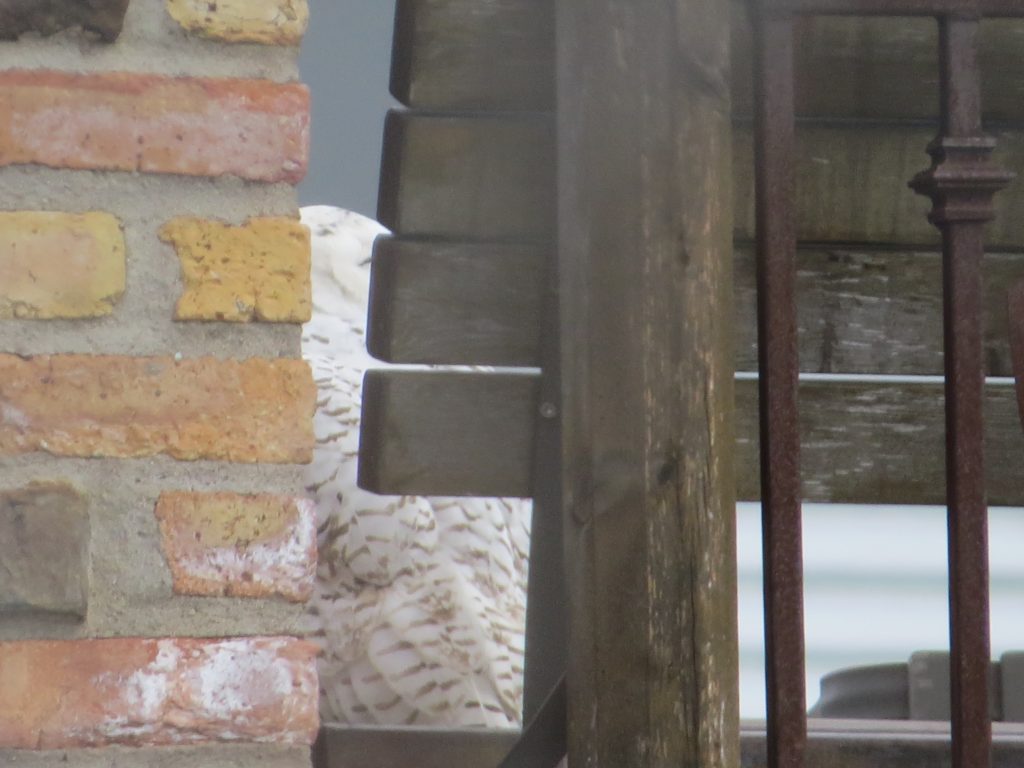 Never have I seen an Owl, Snowy or otherwise, so well fortified.  Camouflaged, yes, but not entrenched. I tried every which angle and every side of the building for a shot. 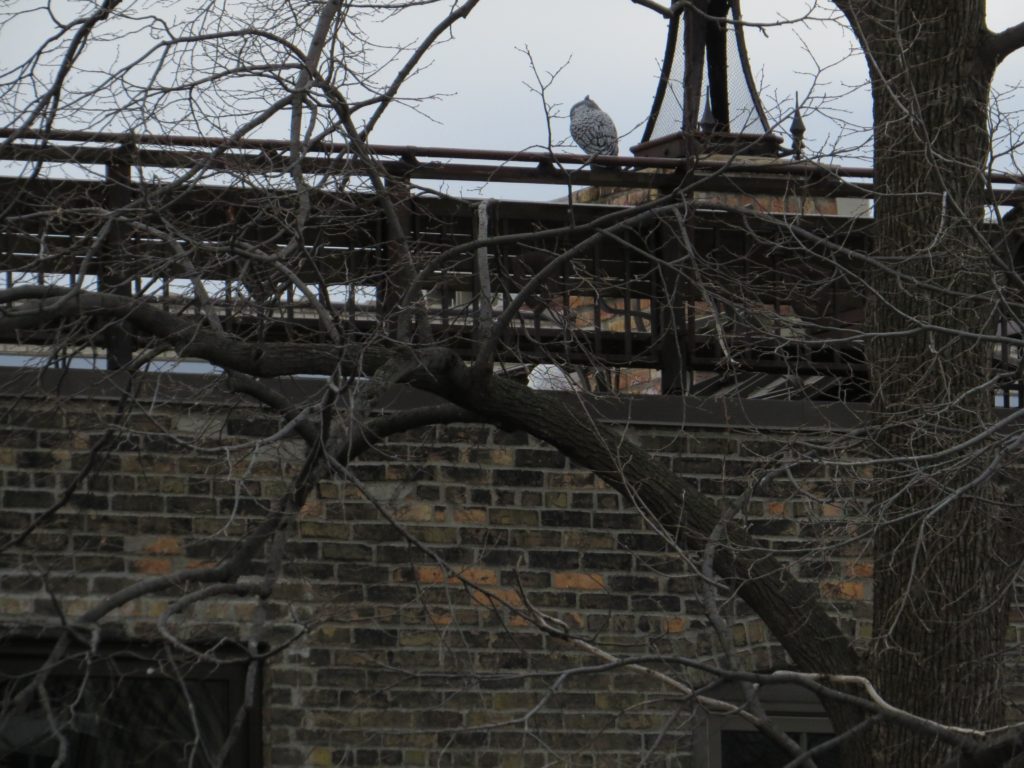 I spent way too long hoping it would fly up to a higher perch. But why would it want to? This guy or gal has figured out how to live the solitary life in a bustling metro environment. 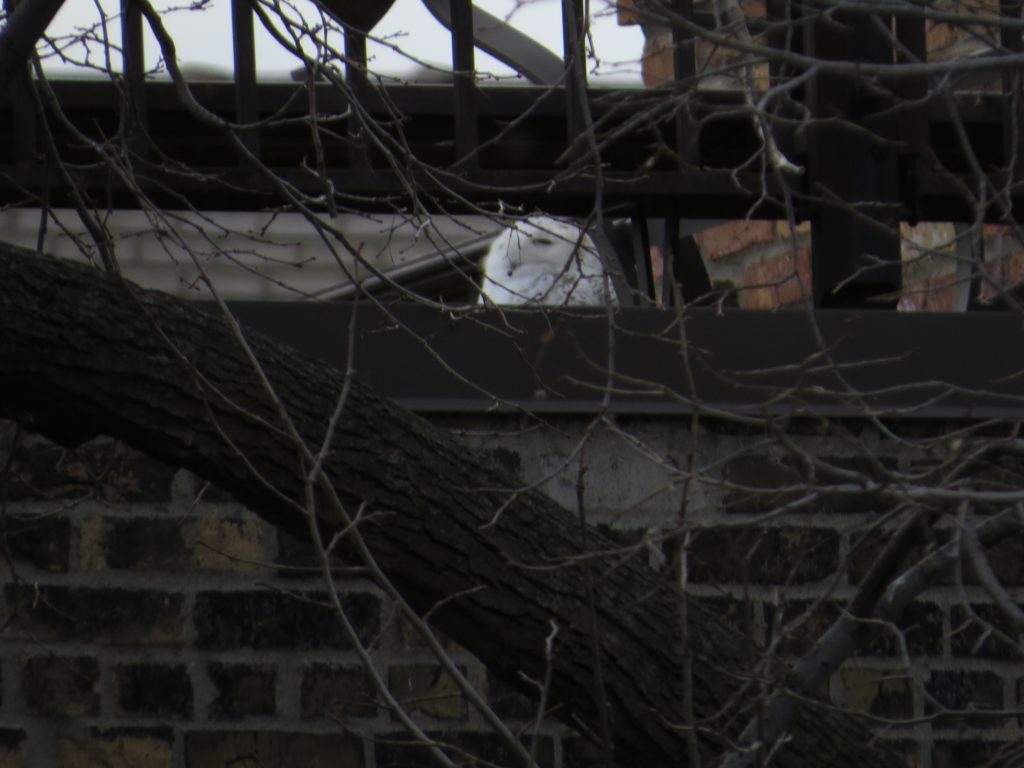 The non-birding-totally-birding metro trip was a success by any standard. It was back to rural west-cental MN where more adventure awaited in the days to come. We’ll save that for the next post, but to close things out, here’s a Great Horned Owl the kids and I saw on the ride back home. 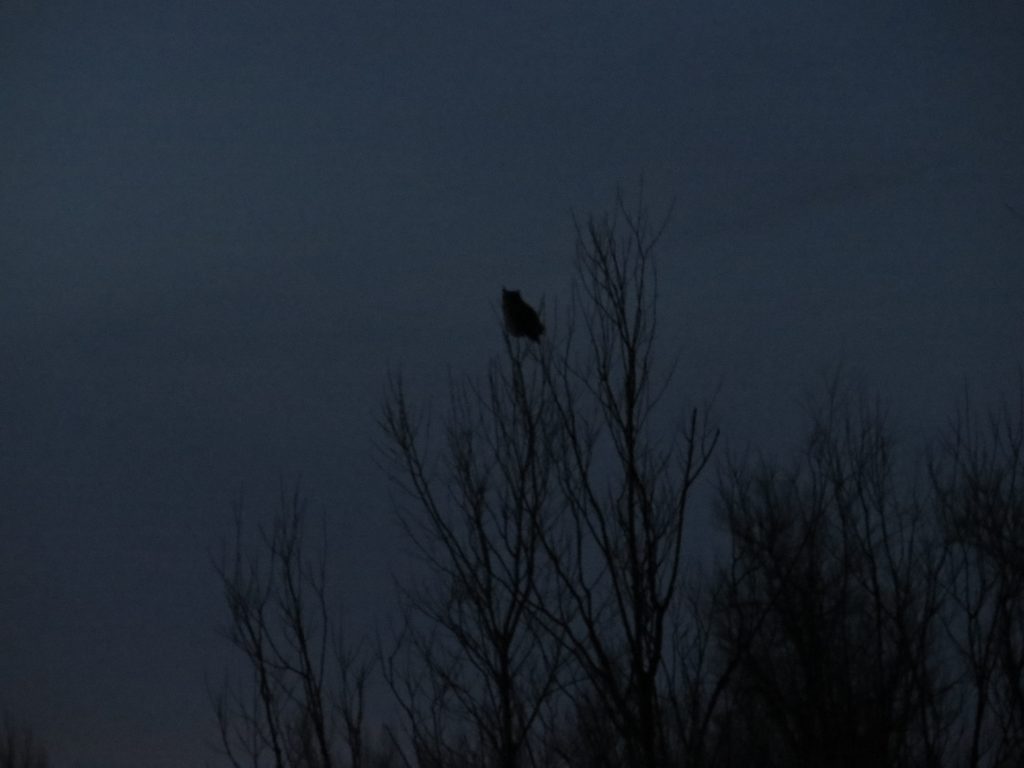 5 thoughts on “Reader’s Choice Makes For A Choice Reader”