Since my parents have become AZ snowbirds, our family has now made four trips to Arizona.  Each trip has had its own life bird goals or priorities.  Each time the target bird(s) have been realized along with a generous complement of bonus lifers.  Here’s a quick recap of those priority birds:

So then what was the trip bird for this most recent Arizona adventure? It was an Owl, but before I tell you which one, it is worth noting that each Arizona trip has already produced multiple Owl lifers:

So what’s left in the Owl department? A few actually, but the only one I was after on this latest trip was the Whiskered Screech-Owl. It would be this trip’s most-wanted bird.

It is no coincidence that my Owl collecting started accelerating after I first met and birded with Tommy DeBardeleben in 2015.  Tommy of Tommy’s Owl Big Year (TOBY) fame is the reason why I have a pretty sweet collection of Owls.  Just like how you can never leave Grandma’s house hungry, Tommy has made sure I’ve never left Arizona feeling an Owl void.  No, he has made sure I have always gotten a good helping of a fresh Owl or two or three.  This past year our roles were reversed as I got to help Tommy find some Owls in Minnesota for TOBY, but now it was back to Tommy taking the lead once again in the storied Madera Canyon as we pursued my 16th Owl lifer. 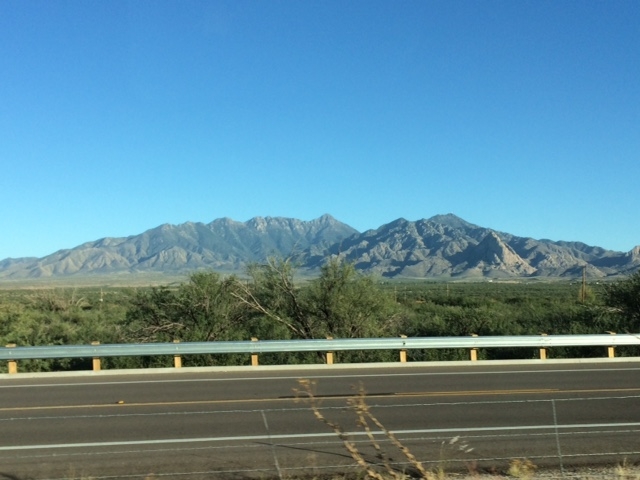 On the evening of October 19th, Dad and I drove out from our hotel in Green Valley to Madera Canyon to meet Tommy who was accompanied by another good birding friend, Gordon Karre.  Gordon, Tommy, and I have owled together many times all the way from the Canadian border down to the Mexican border. We’ve driven hundreds of miles together (3.6 of those were even in reverse!). We have logged an extraordinary number of Owls together from well over a dozen different species.  And here we were doing it once again.

As we waited for darkness to settle over Madera, we hung out for a bit at the feeders at Santa Rita Lodge, watching some Magnificent Hummingbirds and chatting with a birding couple from Tennessee.  With plenty of time to kill, we also successfully pursued a Rufous-winged Sparrow lifer.  Finally, though, complete darkness had fallen and it was time to go to work.  Tommy had assured me that Whiskered Screech-Owls are easy in Madera, but there was one catch: Tommy had only ever tried for them in the spring when Owls are more vocal.  Going after these birds in October was uncharted territory for Tommy. Yet, he was confident that even if the Owls were silent, we might be able to rouse them with some playback.

It turns out that the Owls were still fairly vocal.  Almost immediately when it turned dark, we started hearing some in the distance. But as we would pursue them, they would clam up.  Then the silence would hang on, which initiated the doubt-worry cycle about whether the night would be a success.  Tommy was unfazed, though, and has a lot of experience to draw from.  He owled on and kept the flashlight moving even when it seemed bleak.  Turns out the worry in my head was for nothing because shortly after we walked in the direction of a vocalizing Whiskered Screech-Owl, one landed in a tree right near us! But it must have been hunting and wouldn’t look at us… 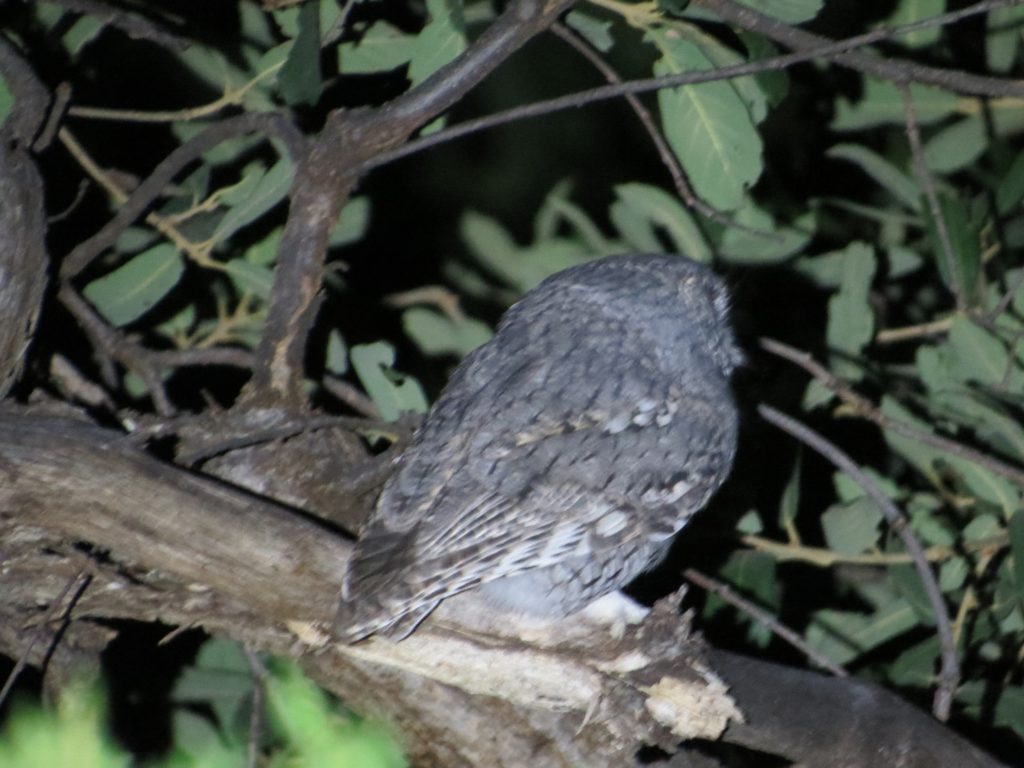 As we crept along the canyon hillside to get in a better position to see the Owl’s face, it suddenly flew off! We could not find it again.  The satisfaction of getting the lifer was muted by the Owl showing us his bad side and only briefly at that. Would this be my lifer sighting–the side view of a bird?  The discouragement was returning the longer we weren’t finding it.  Again, Tommy never panicked or wavered; he just kept that flashlight moving. And then I heard him say those awesome words that I have heard him say so many times before, “Hey, Josh!” 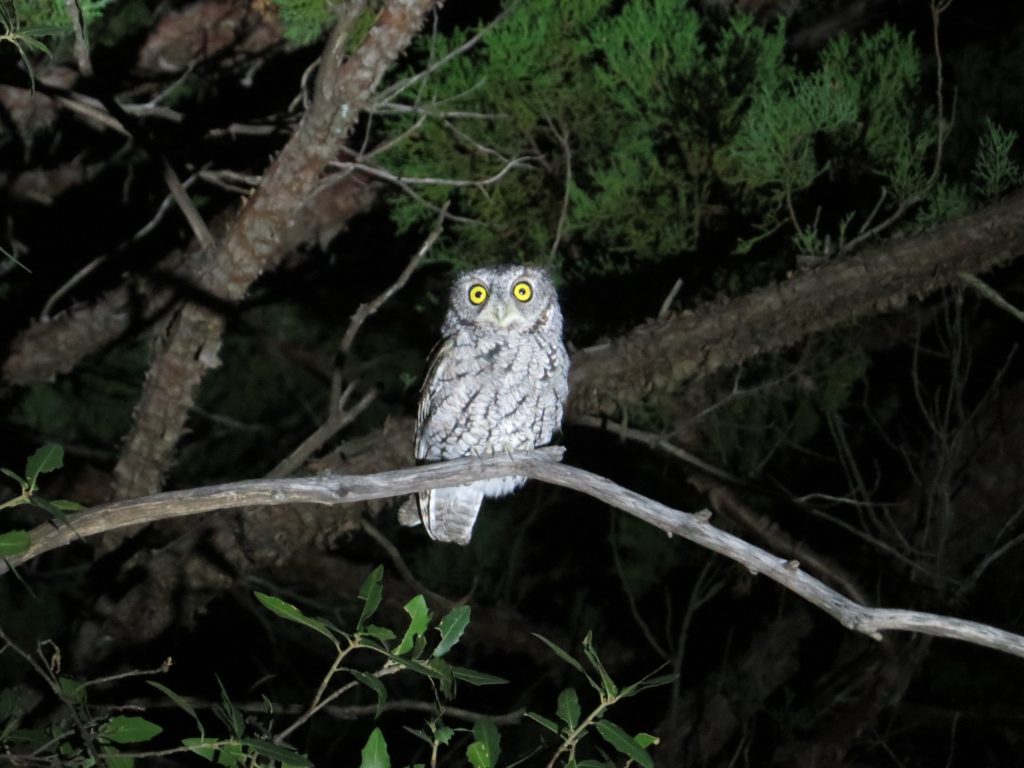 This, this is what I had been waiting/hoping for.  Tommy did it. 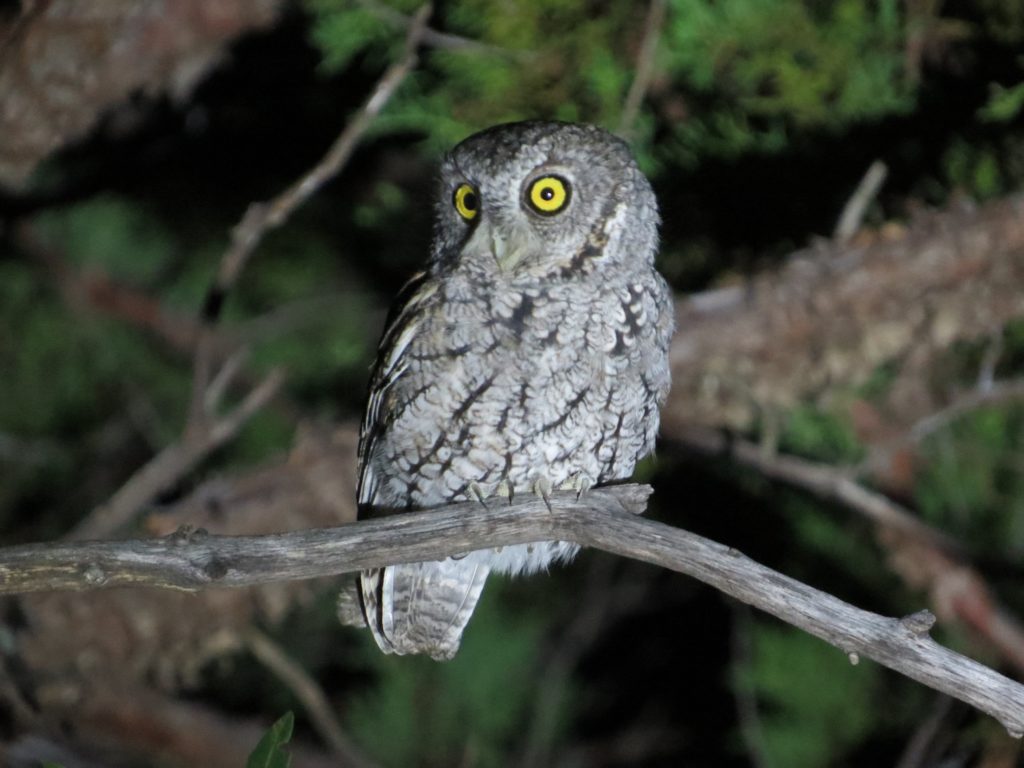 This Owl was very cooperative (finally) and just let us enjoy the show. 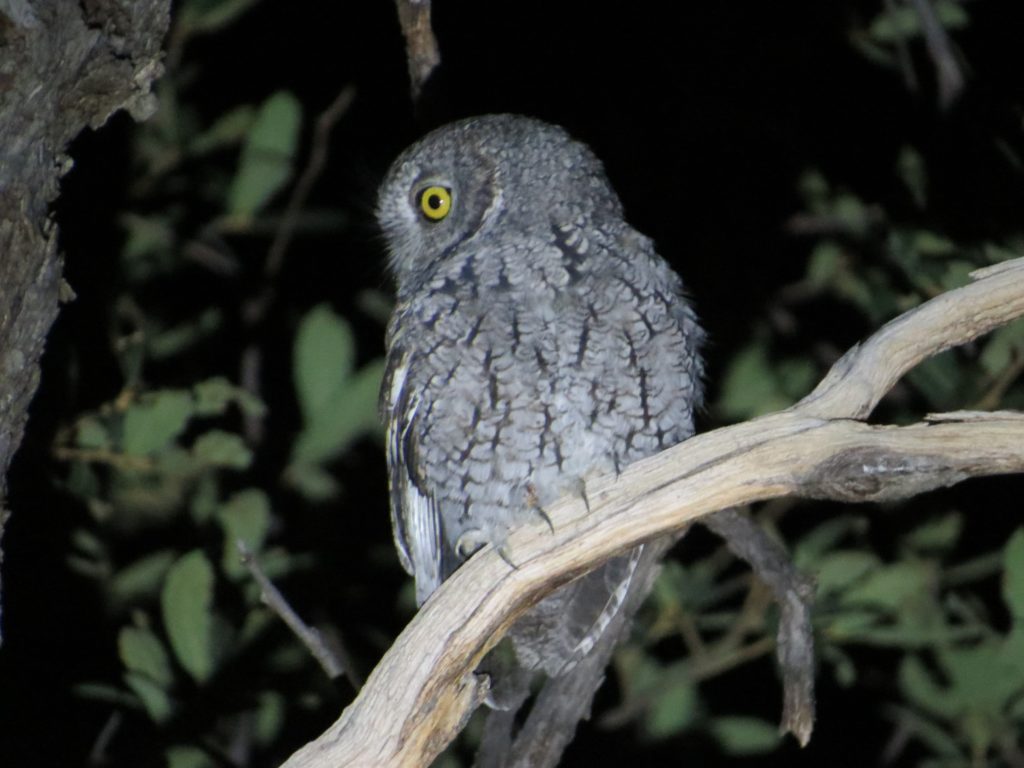 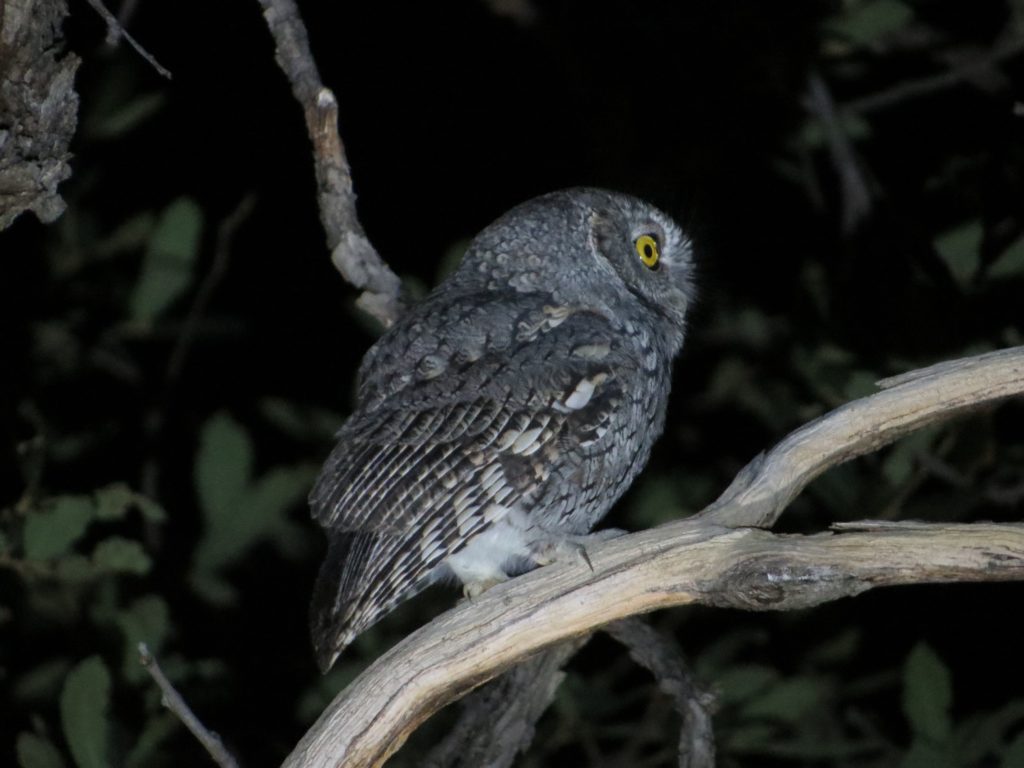 Maybe I had it backwards. Maybe it was the Owl who was enjoying the show of four happy birders who had just succeeded on their mission.

Eventually the Owl started to tire of us, perhaps even getting downright annoyed/angry with us. 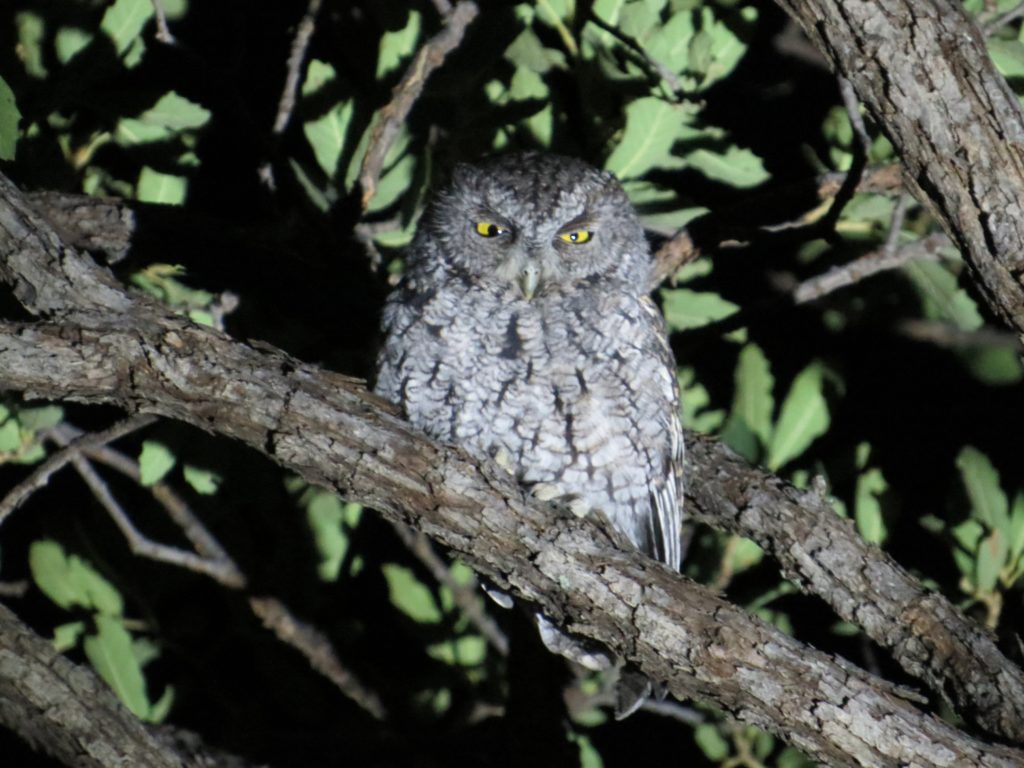 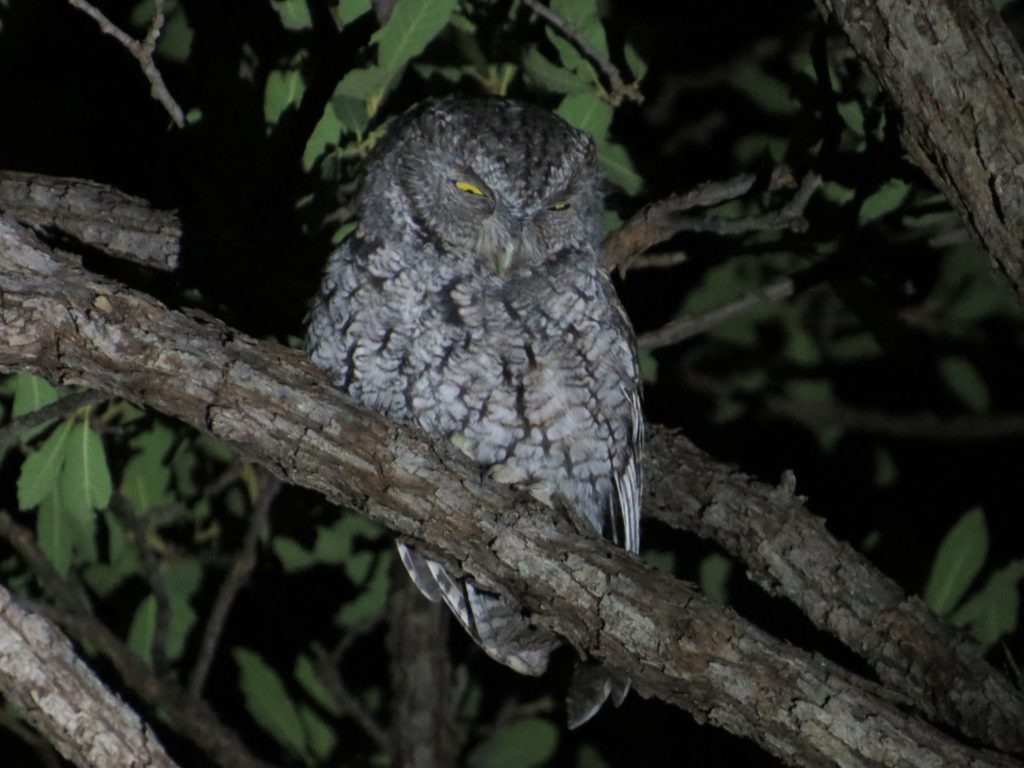 It was time to leave this Owl alone. We had gotten our fill.  So with one last look, we were on our way. 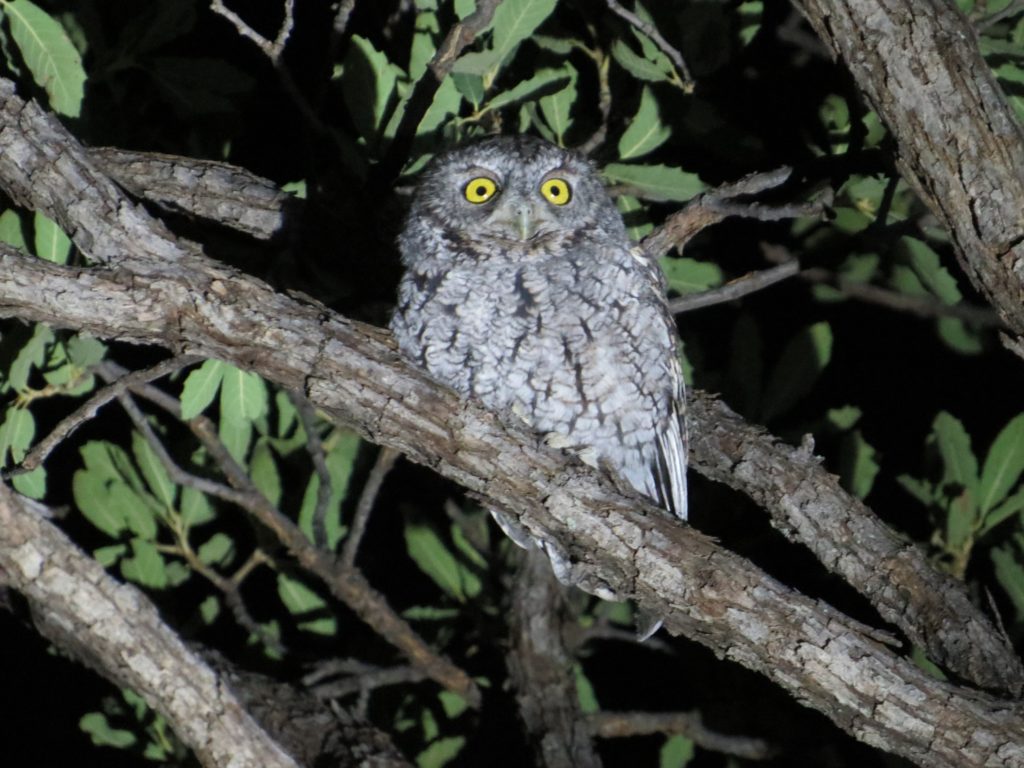 At this point Dad went back to the car on account of a knee that was giving him fits. Gordon, Tommy, and I decided we would try for more Whiskered Screeches.  Why not?

As the three of us walked along, we heard a strange vocalization that Tommy couldn’t identify.  Earlier my dad had heard the same thing and thought it was a Whiskered Screech, but Tommy had said he hadn’t heard them make a sound like that. Eventually Tommy tracked down the source of the sound–a young Whiskered Screech high above us! 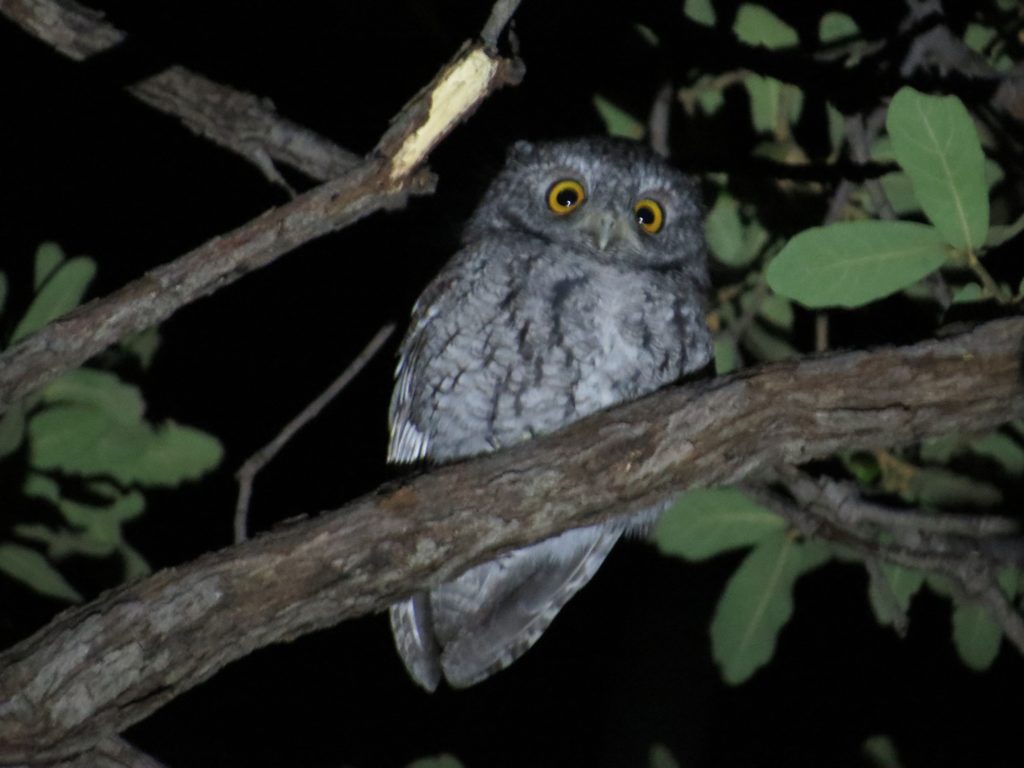 Hearing this vocalization was an exciting learning experience for Tommy.  It wasn’t as cool as the Morse-code calling we heard the adult make earlier, but it was still pretty neat regardless. Have a listen for yourself:

Finally it was time to call it a night and call it a trip (birdwise, that is). Once again, the Arizona birding was a huge success with Owl lifer #16 officially on the books all thanks to this guy. 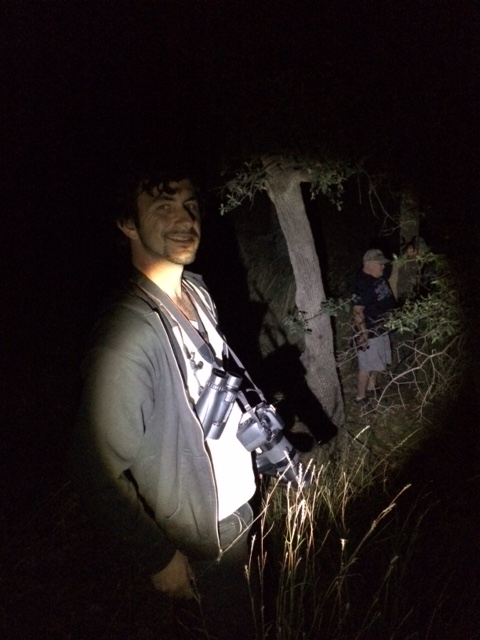 Two Owl lifers remain for me in Arizona. The question is not whether Tommy can help find them, but rather, will it happen in 2017? Time will tell.