Like most Americans, I celebrated the 4th of July weekend with family, doing the typical things like picnicking outside all day, tossing the ball around, and cruising a lake in a boat in search of a good fishing hole.  Most people are able to focus on these activities exclusively; birders always have the incidental birding meter running. That’s how you ride in a boat and show your companions a patriotic scene, fitting for the weekend. 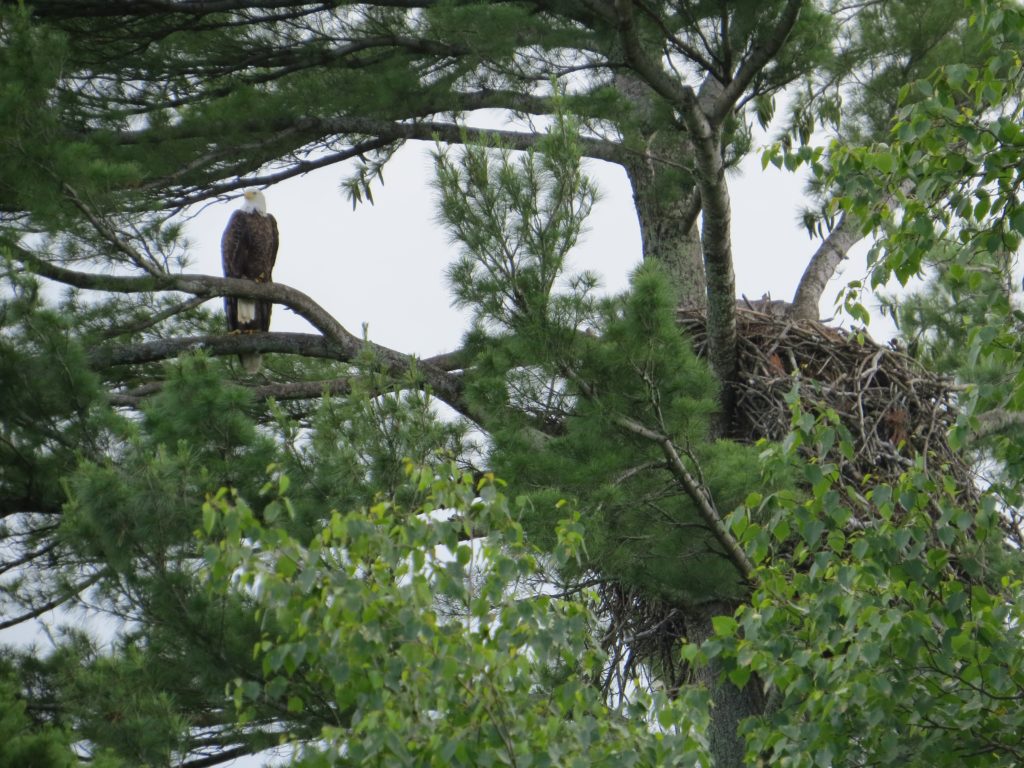 It’s also how you can point out to Grandma during that all-day gathering that the bird that flushes from the house each time someone goes in or out is actually a pretty cool bird and not some lame Robin that none of us can stand to have making a mess on our house. 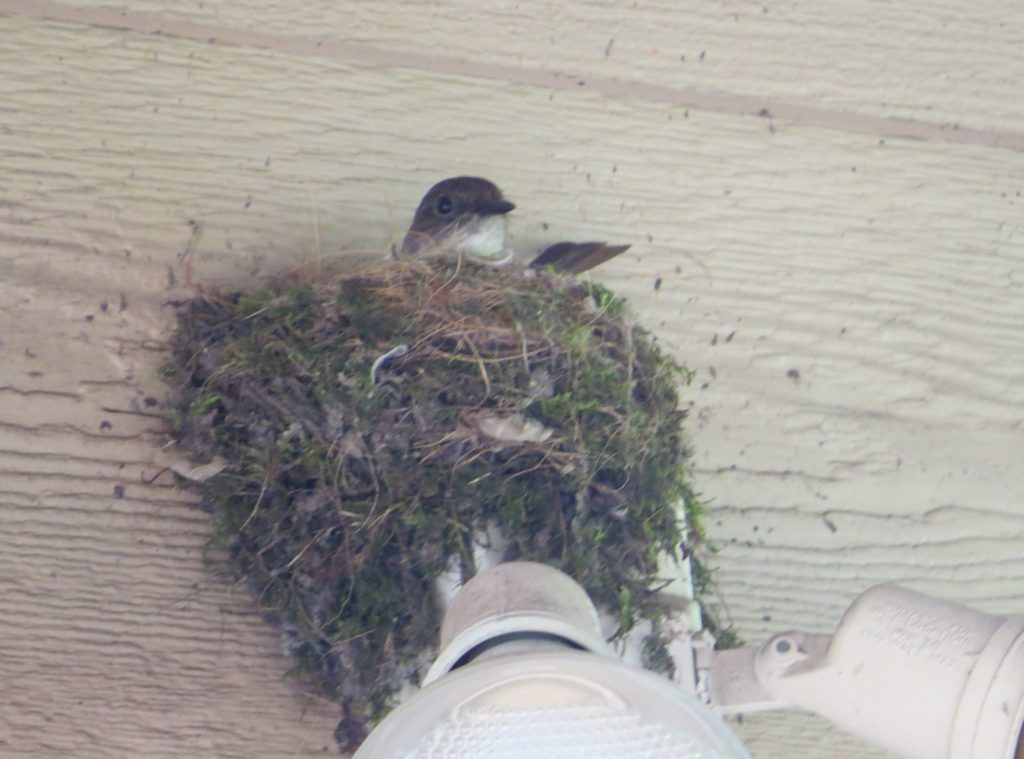 Unlike the Robin, the Eastern Phoebe’s nest is quite aesthetically pleasing and well-constructed. 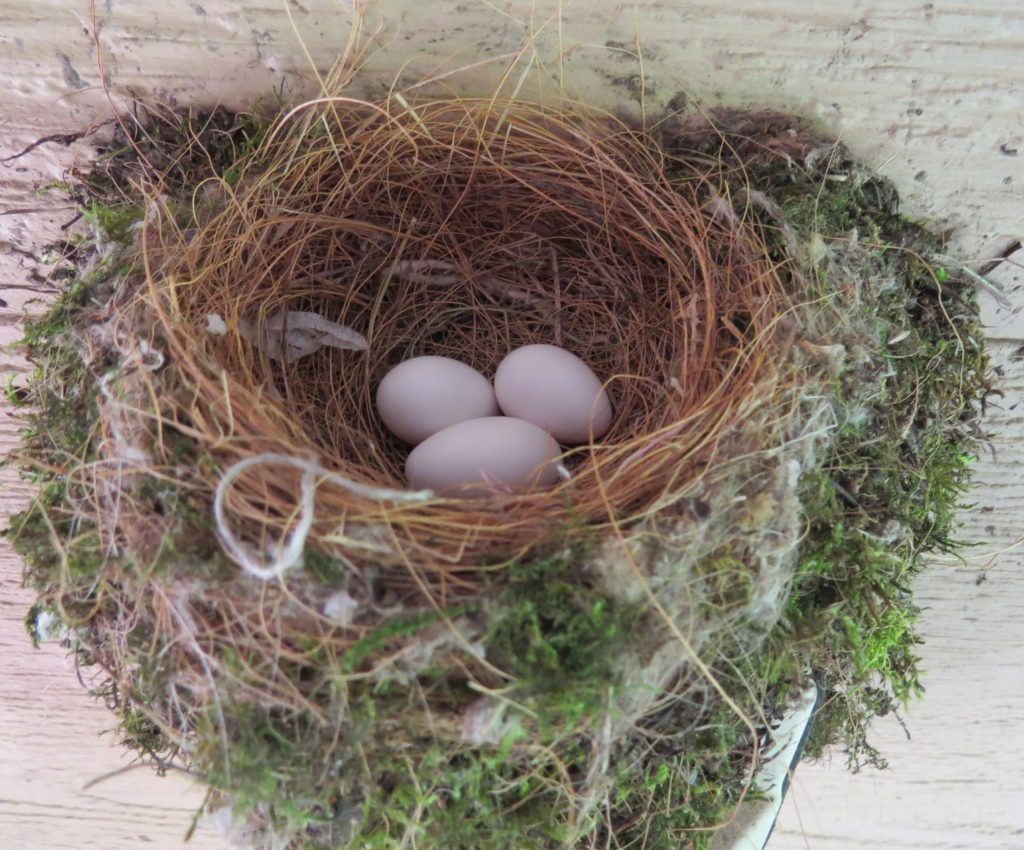 I almost passed on the opportunity to get crushing photos of the most accommodating Eastern Phoebe I’ve ever seen. That would have been a shame. 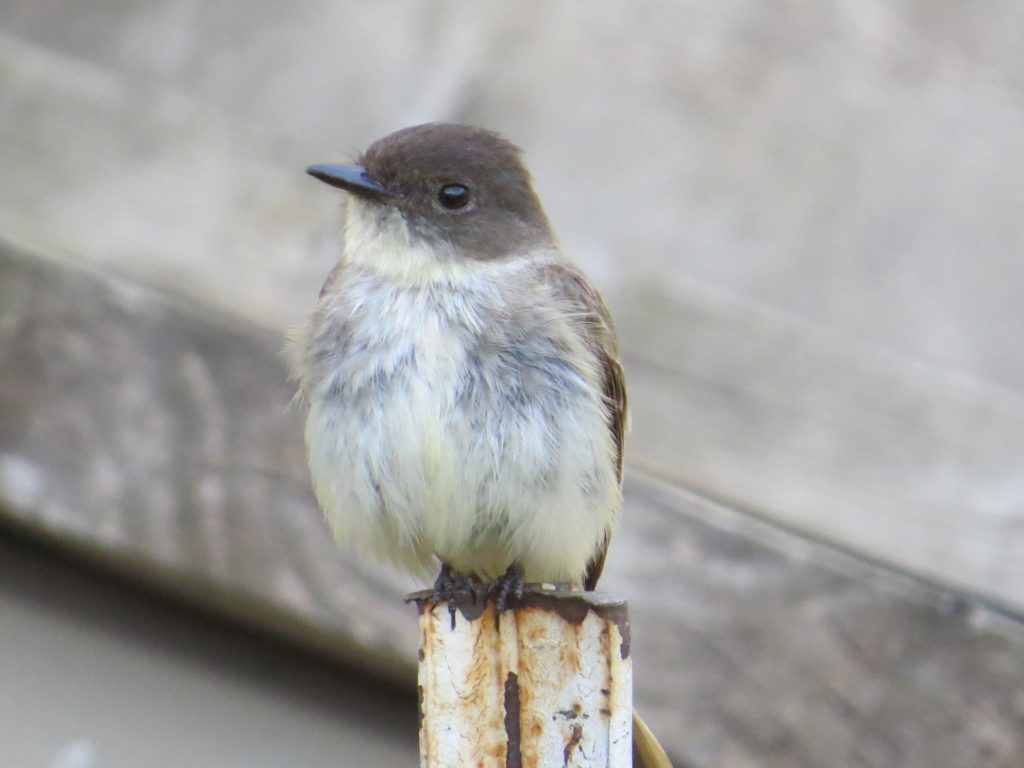 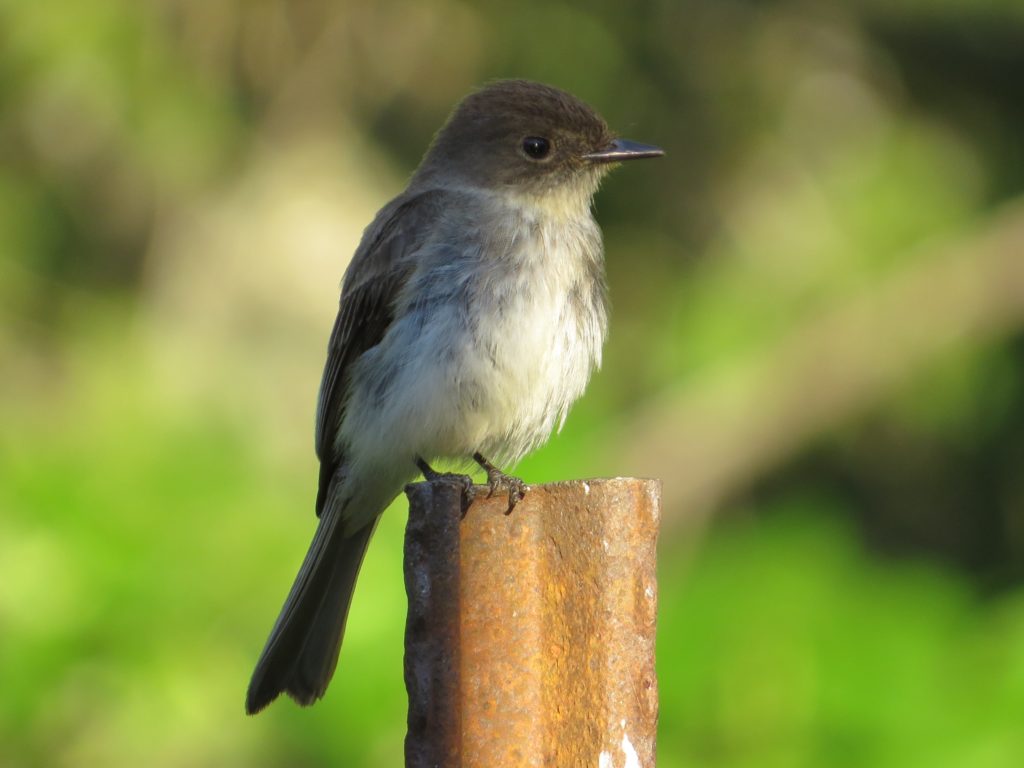 But don’t let me fool you, it wasn’t all incidental birding.  I was in northern Minnesota, after all, a land ripe with fascinating birds in all seasons. Local birding friend, Julie, had told me about a Connecticut Warbler she had recently found in a Black Spruce/Tamarack bog not more than 20 minutes from my parents’ house.  The Connecticut was a bird I had previously only had as heard-only in the Sax-Zim Bog, so I rose early one morning donning some knee-high rubber boots, long sleeves, long pants, and an unhealthy dousing of bug spray.  I was going all in to mosquito central.  No sane person does this. 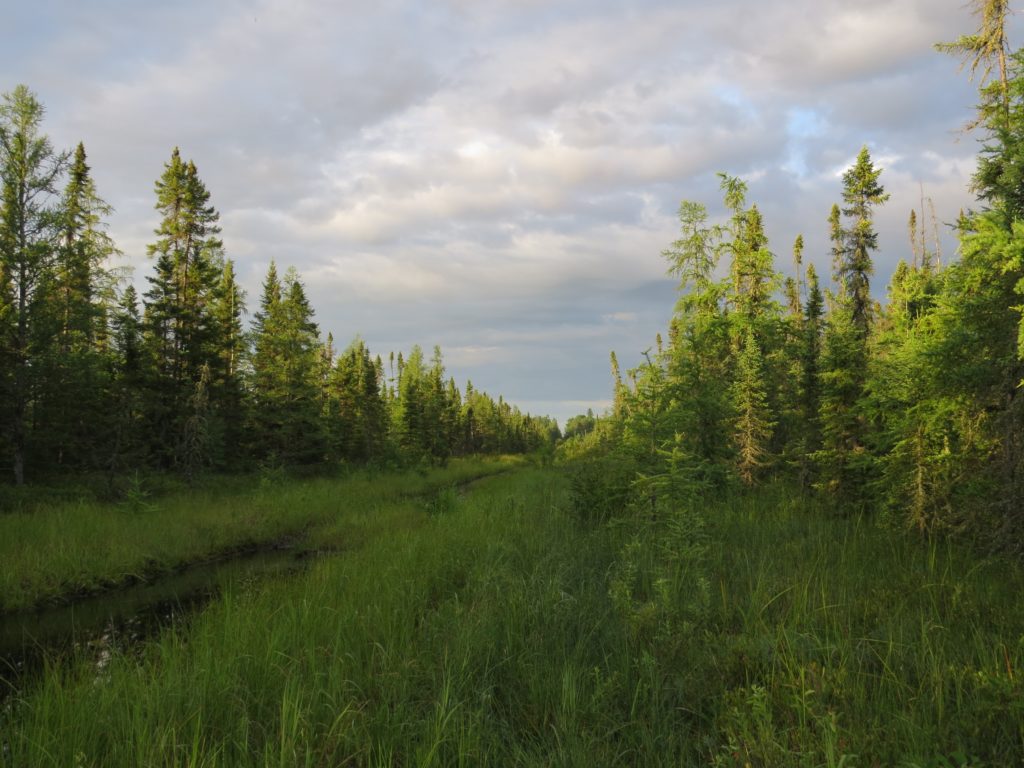 But we die-hard birders do, especially when we think of the possible reward of visuals of a skulker like the Connecticut. It’s worth some welts and the loss of a little sleep.  Julie had made things easy for me by marking a tree where the Connecticut had set up a territory along this abandoned, water-logged road pictured above. However, as we are getting into July, the Warblers just don’t sing as much.  When I got to the spot after hiking a quarter mile, I didn’t hear it.  But patience eventually rewarded me with that clear, ringing sound of the Connecticut: “Bea-cher, bea-cher, bea-cherbeach!” After waiting it out a little longer, I did get some great up-close looks, but I wasn’t quick enough to get a photo.  Seeing one was a good improvement on my heard-only lifer, but I really wanted that photo.  Maybe this Warbler was busy with a nest because it never did show itself again despite me waiting for an insane amount of time in the cloud of mosquitoes. I finally decided to call it quits and head back to rejoin the family.  A heard-only Boreal Chickadee and a Lincoln’s Sparrow were a couple of good birds on the hike out.

The next day on our final morning in the northwoods, I decided to give Julie’s spot one more try.  That Connecticut photo seemed in reach; like with the Phoebe, it would be foolish to pass on the opportunity to try. Thanks to a late night fireworks show, I was a little slower getting out of bed that next morning.  In fact, I arrived at the trail a full 40 minutes later than the day before.  Considering I had heard the bird right away that day and that it was singing sporadically, I didn’t like my chances for a repeat on the visual I got. When I got there and opened the car door, though, I didn’t hear the Connecticut but instead heard something just as cool–the unmistakable drumming of a Black-backed Woodpecker! And like that my search priorities shifted. I followed the sound of the steady drumming which echoed through the bog. And there, there he was just 10 feet off the waterlogged road about 10 feet up. I was blown away. 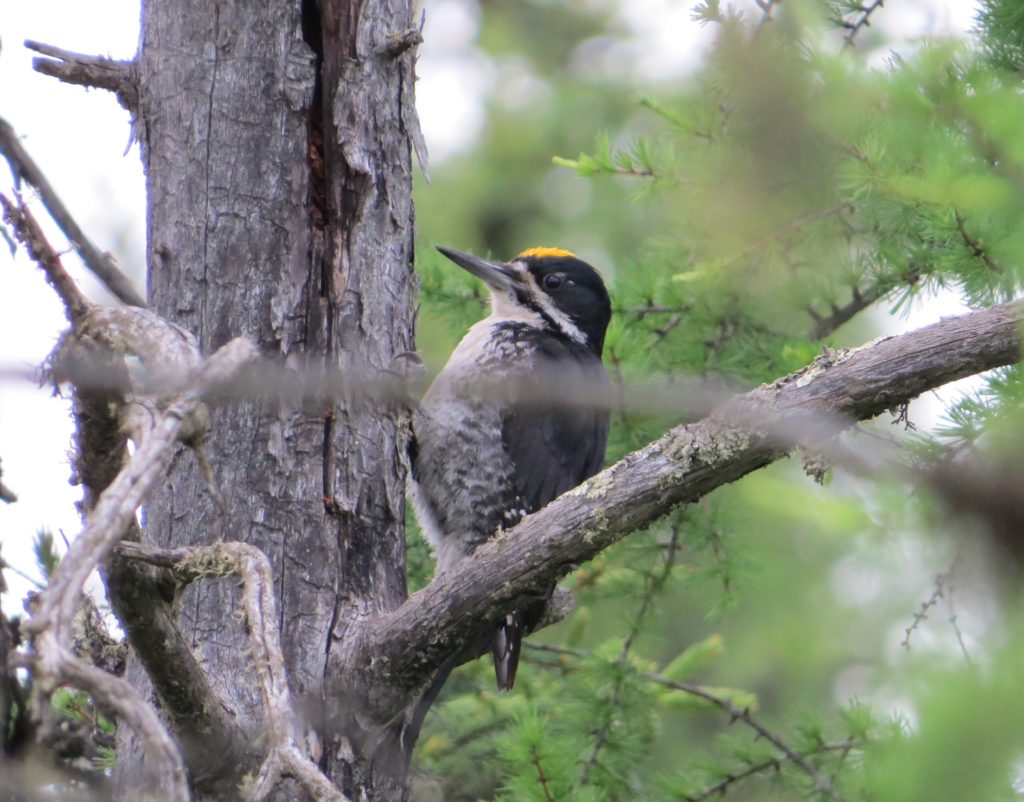 The Black-backed was not a lifer, but I have never seen a male before with his bright yellow crown and have always wanted to.  In a sense this felt just as fresh as a lifer. So I set out to accomplish one goal (photo of the COWA) and inadvertently and delightfully accomplished another.

I spent a lot of time enjoying this Woodpecker all while keeping an ear open for the Connecticut which did not vocalize even once. 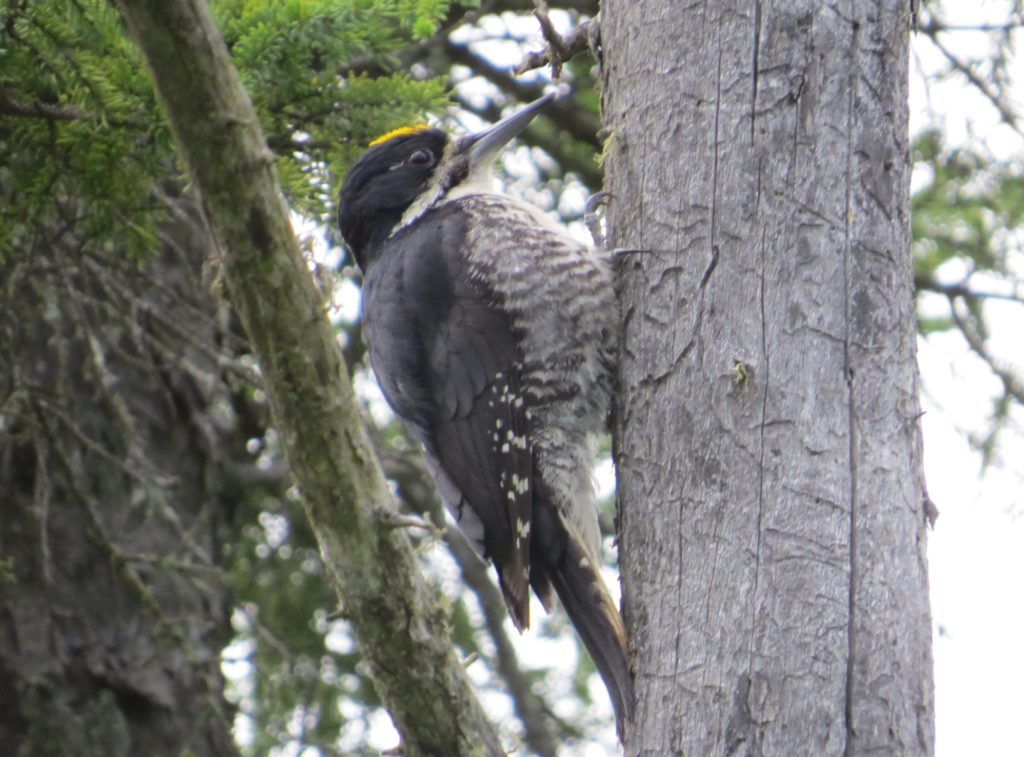 Here you can see and hear that distinctive drumming.  It’s such a cool sound.

I’ve heard that Black-backed Woodpeckers are quite tame and don’t really care about a person’s presence.  This experience certainly seemed to back that theory up. And if you have doubts about whether this bird was appropriately named… 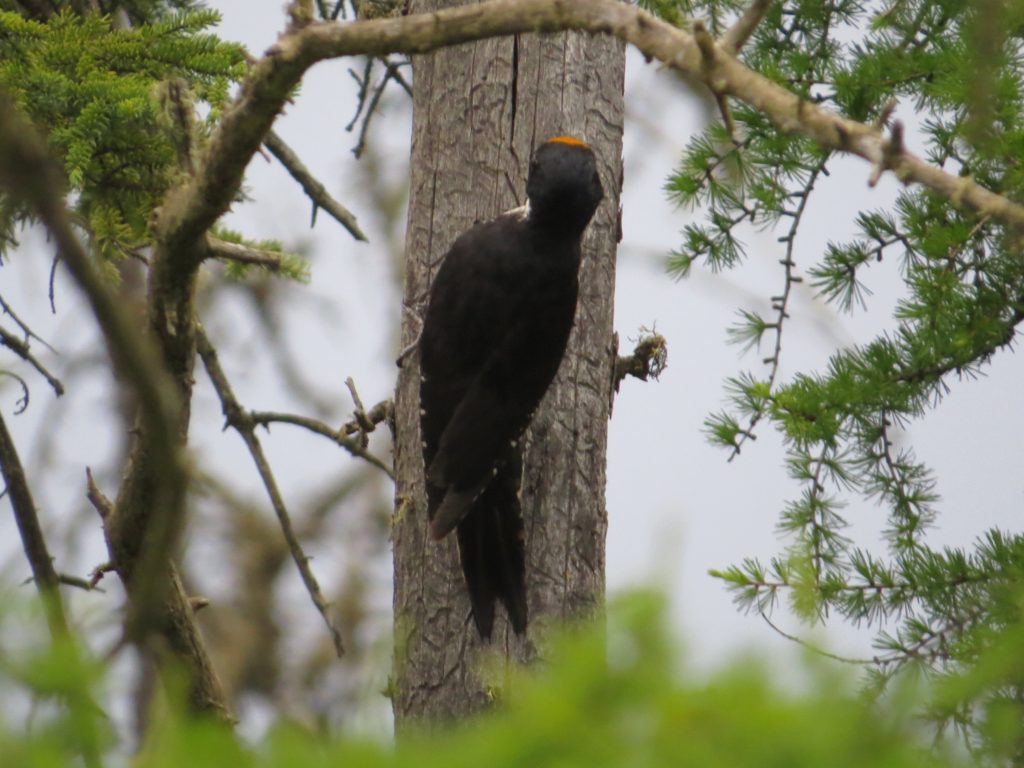 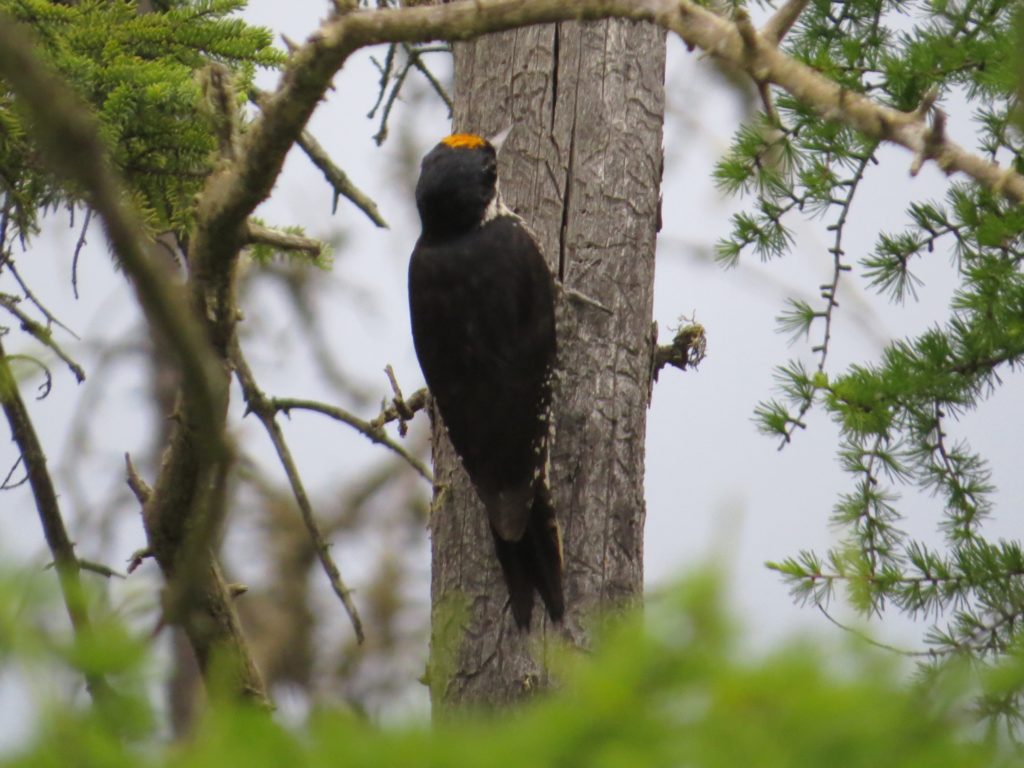 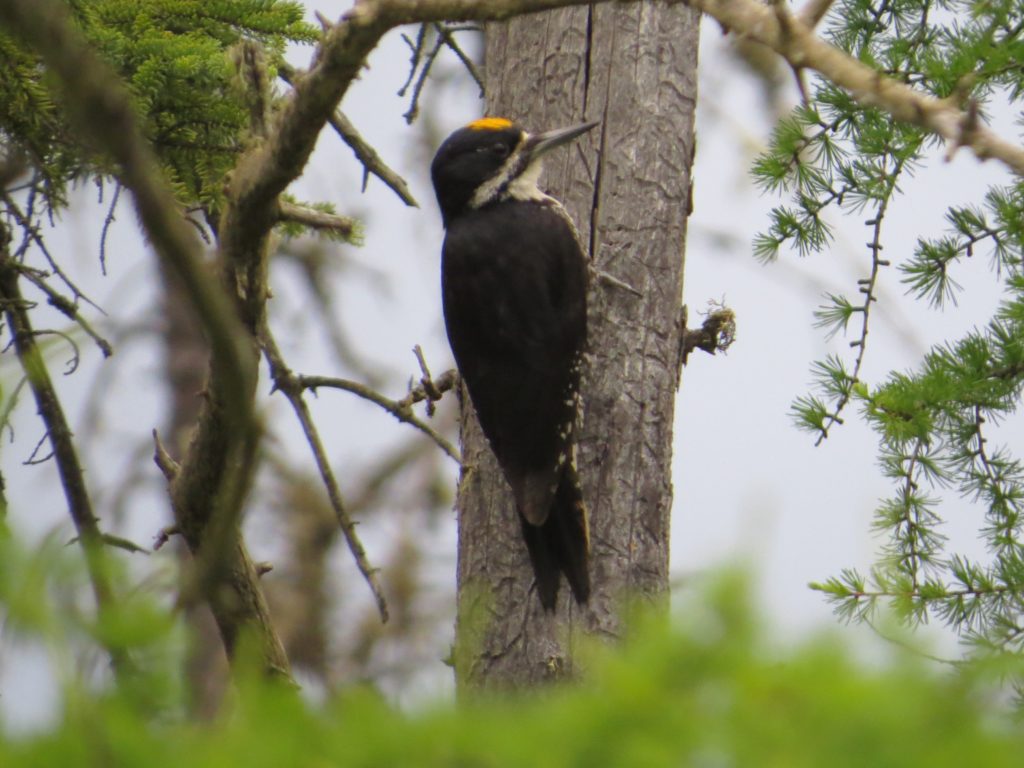 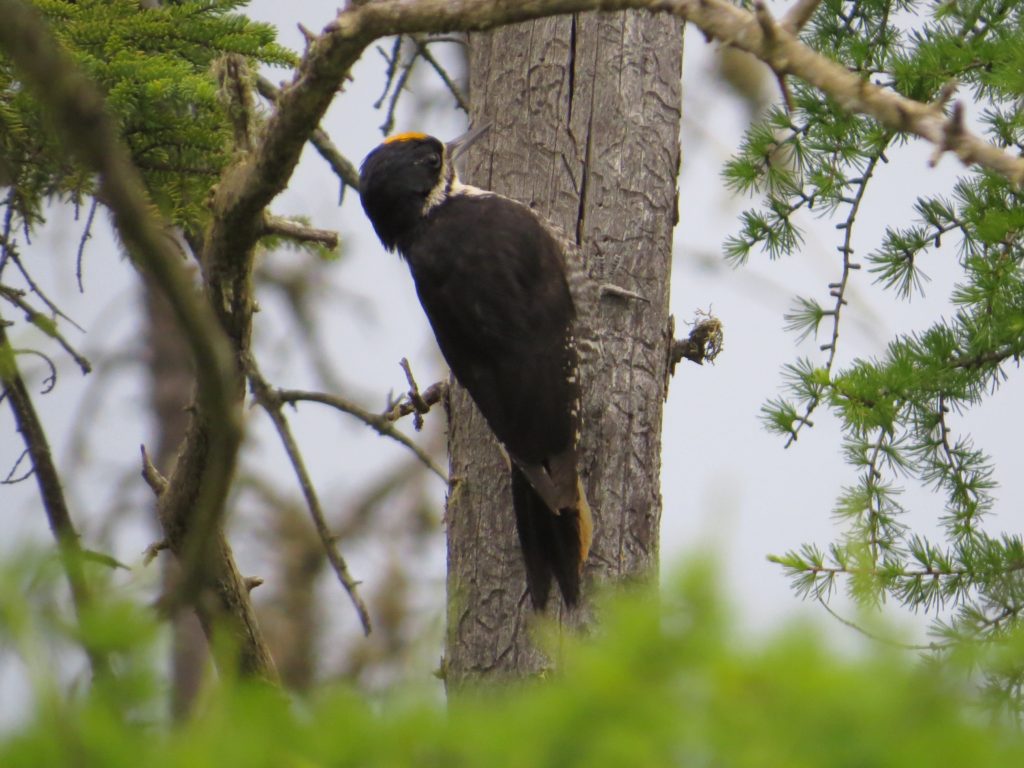 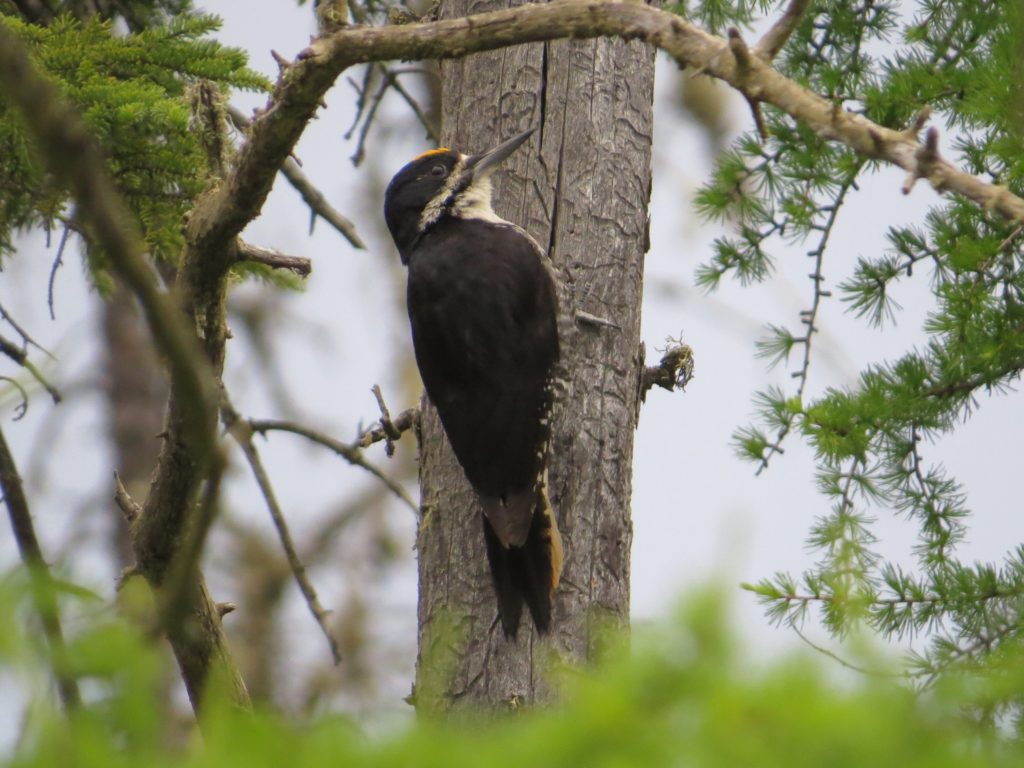 Here’s another video.  I was hoping to capture him drumming some more, but instead caught him itching himself. Mosquito bite?

Eventually the bird went on its way, and so did I, trying to dig up that Connecticut.  I finally called it quits on the Warbler, vowing to try again next year when it was earlier in the breeding season and the birds’ hormones are still raging causing them to be more vocal. On my way back to the car I again spotted the Black-backed Woodpecker, but I noticed something different–no yellow crown, a female! 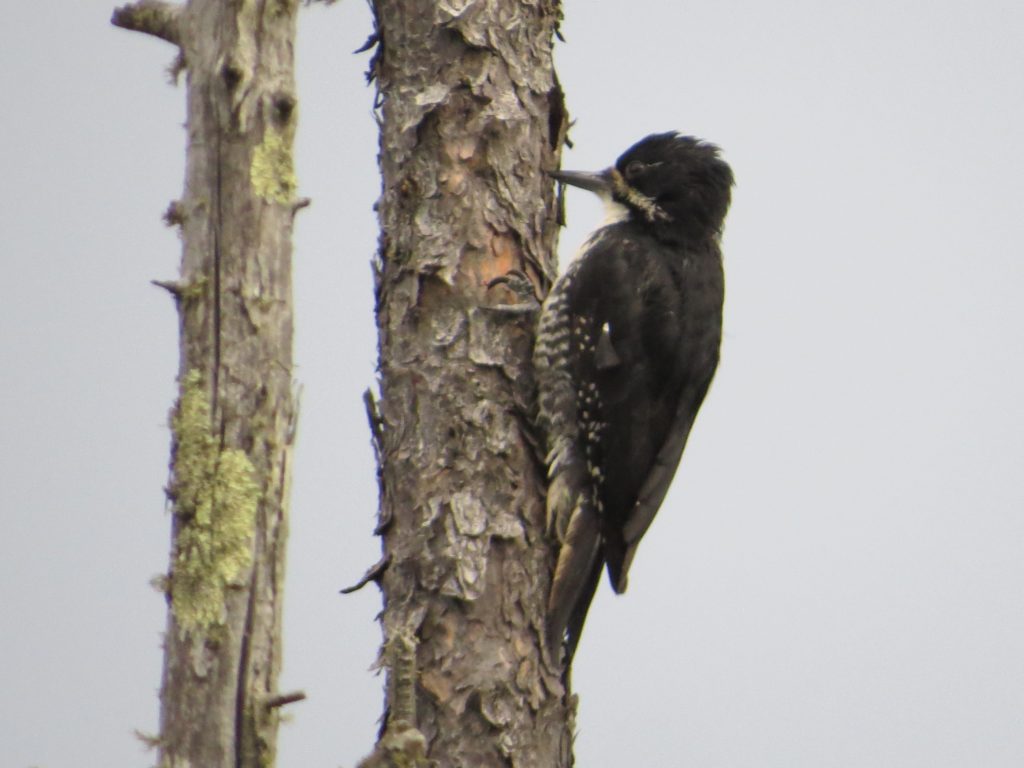 Thrilled with the bonus Woodpecker, I continued my waterlogged hike back to the car.  Then I again heard a Black-backed Woodpecker a couple hundred yards from the first two, and then I saw one of them following the other around.  I thought they must be those two that I saw earlier.  I glassed the two birds as one followed the other up a Spruce and was shocked to see that both were males–an adult being followed by this juvenile! 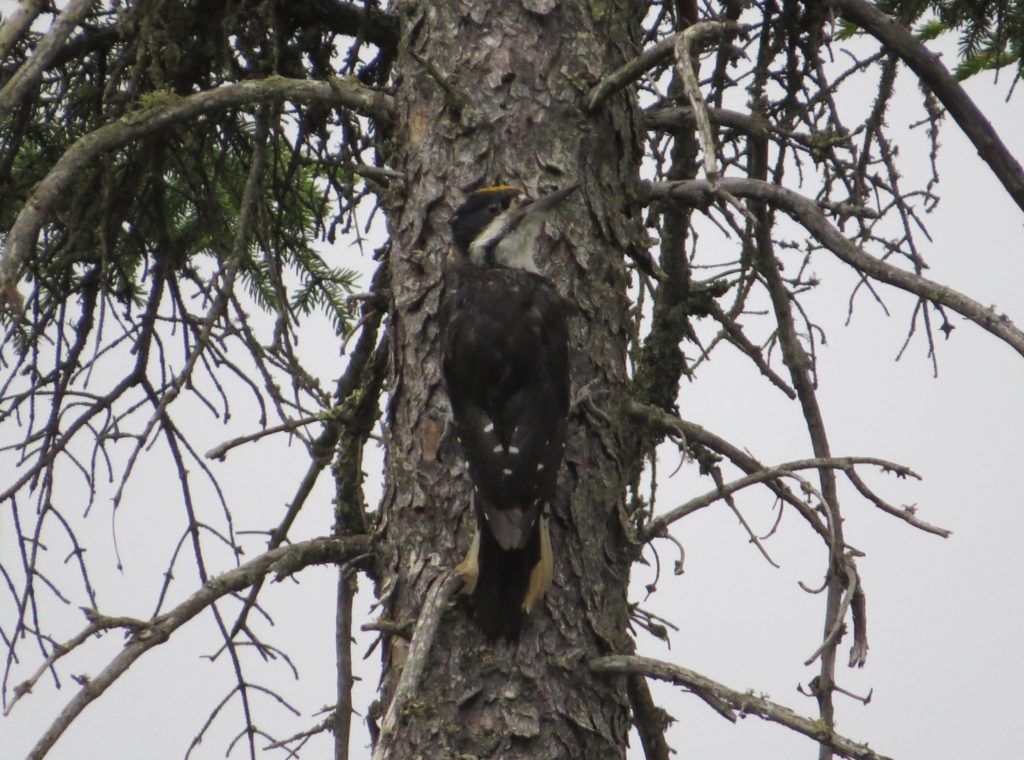 This meant I had for sure seen three different Black-backed Woodpeckers and maybe four if the second adult male was a different bird than the first.  It’s not everyday you see a Black-backed Woodpecker, let alone a small pile of them.  Additionally, seeing a good northern bird like this outside of a birding mecca like the Sax-Zim Bog and close to “home” is always a huge thrill for me.  This encounter did not go unappreciated by me and will likely be one of my all-time birding highlights.