Apologies for the overused pun here, but it truly is fitting.  And apologies on further delaying reports from the Tommy D trip in order to cover an outing that happened after his departure, but there has been a tern of events. Apologies again.

I really hate &*%$ Terns.  I am, of course, still licking the wounds from the Gull-billed saga that you just read about, but newer readers may not know about that other horrible, awful, no-good, rotten Least Tern chase to Luverne two years ago.  Not only did we miss the bird by 15 minutes and see Randy get that one minutes before us just like he did with GBTE, but then there was the accompanying camping trip that put Murphy’s Law to the absolute test.  That trip was so miserable, I’m not even going to link to the post on it.  Look it up if you want to cringe.

Anyhow, this past Friday I was still recovering from the hardcore birding trip Tommy and I had last week.  The Gull-billed Tern fiasco actually seemed like a distant memory because of all Tommy and I experienced together (we’ll get to that, I promise). Then as I was contemplating chasing yet another rarity, a Yelow-breasted Chat, something bumped the Chat in the priority queue: a report of an ARCTIC TERN less than two hours from my house in Big Stone County (the bump on MN’s west side).  This was a stunning find by Bob Ekblad who had gone to look for some reported Black-necked Stilts, another casual species in Minnesota.

Despite being burned by two rare Terns in the past, I only hesitated for a moment before throwing the kids in the car and making a run out west.  It looks like things finally terned out for me. The Arctic Tern was right where it was reported, resting on the beach of a small wetland.  Even from this distant photo, you can see just how short the Arctic Tern’s legs are and how gray its breast is. 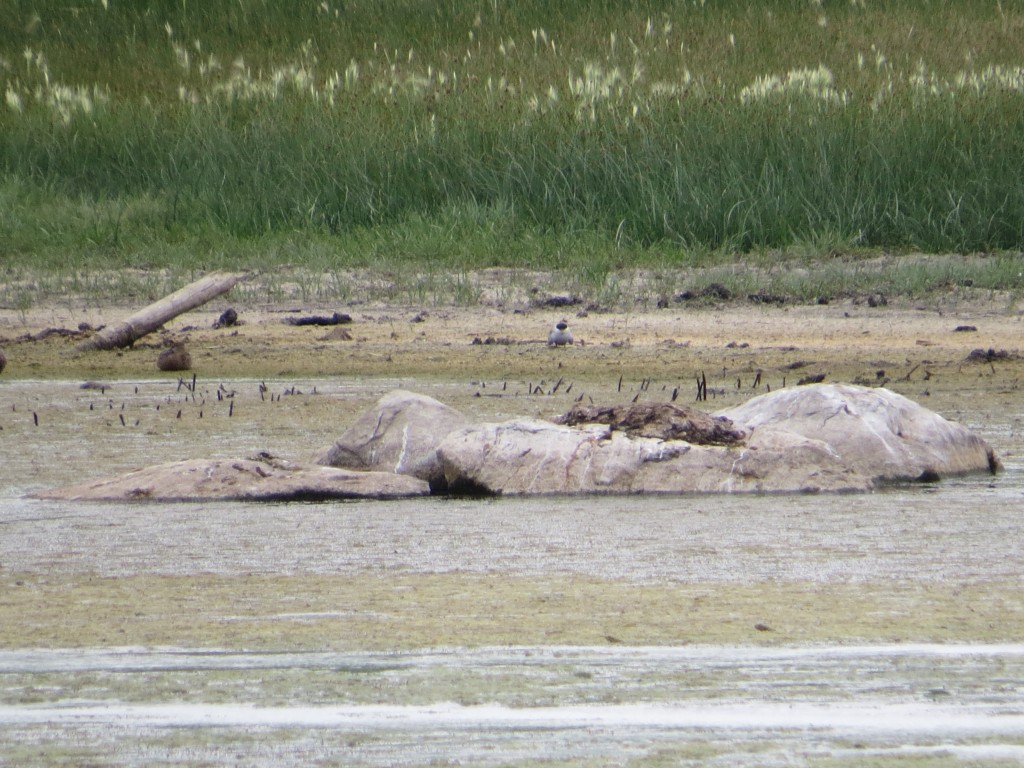 Arctic Tern is casual in Minnesota with most records showing up in Duluth.  I never really expected to add this to my life list because A) I’d have to be in Duluth at the right time and B) I’d have to be standing next to an expert birder who could help me differentiate this species from the Common Tern while it flew in the distance.

So not only was it a thrill to add this unexpected (as in ever) lifer, but there was a driveway to a farm place that put me within 30 feet of the Tern where I could study the field marks for myself up close!  Here I could see the stubbier, all red bill compared to the Common Tern’s longer, black-tipped  bill.  Additionally, I could see the white stripe under the eye and above the gray breast/cheek. 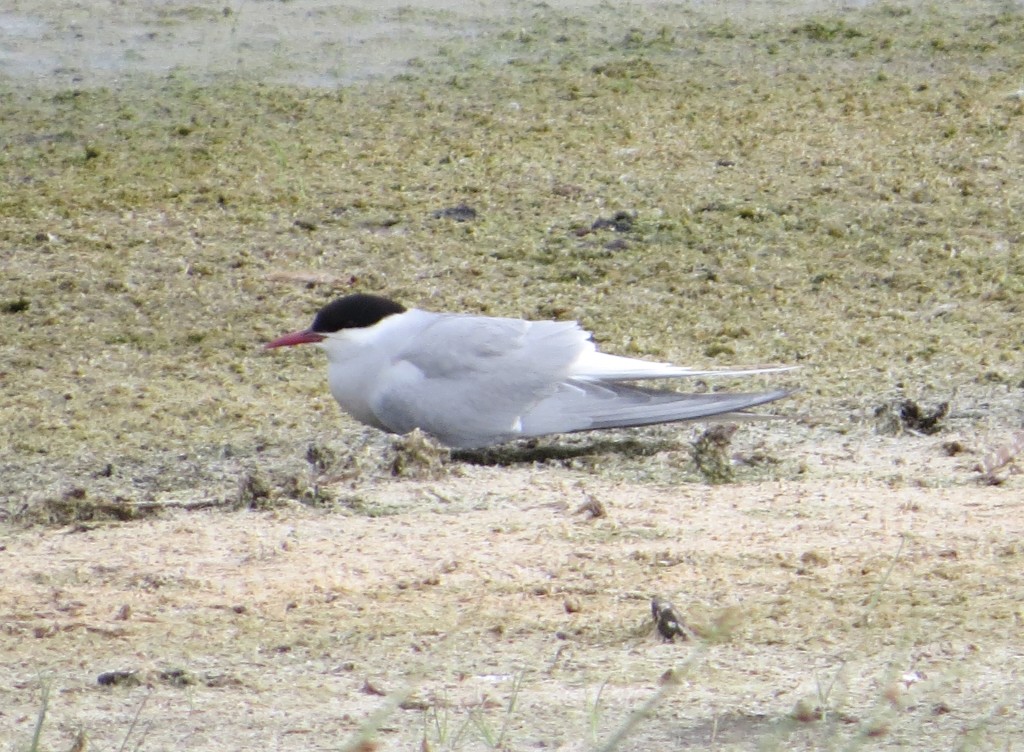 I had thought the Tern was resting on its belly, but I guess its legs are just that short that it only appeared that way.  I was hoping to catch the Tern in flight to see the diagnostic dark trailing edge of the primaries.  I didn’t get to see it fly, but some other birders did see it fly and captured that field mark in photos.  The bird appeared quite lethargic to me, understandable considering the Arctic Tern is famous for its migration from the Antarctic to the Arctic breeding grounds and back each year, a minimum of 24,000 round-trip miles as the crow flies.  And we all know Terns don’t fly like Crows.  Research with tracking this species has shown that they typically put on 44,000 miles a year. This bird was probably quite wore out and chose the most random of stops to rest. 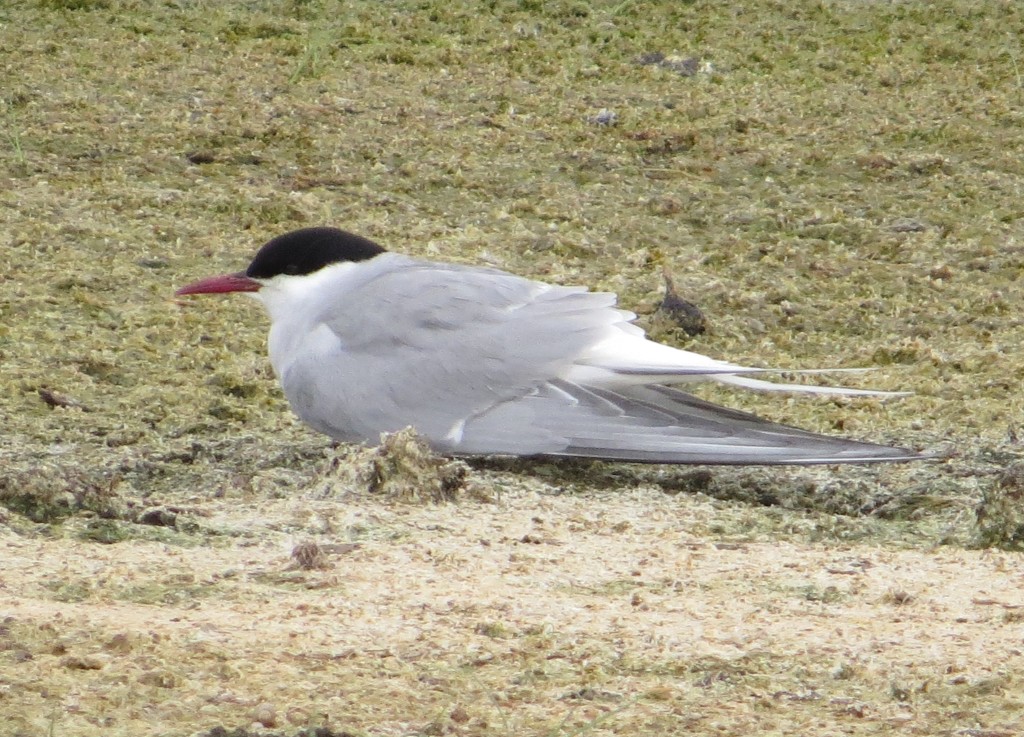 Keeping the Tern company was an American Avocet which is not that rare of bird this far west in Minnesota.  Avocets have almost become something of a trash bird on this blog this year. Who would’ve thought? 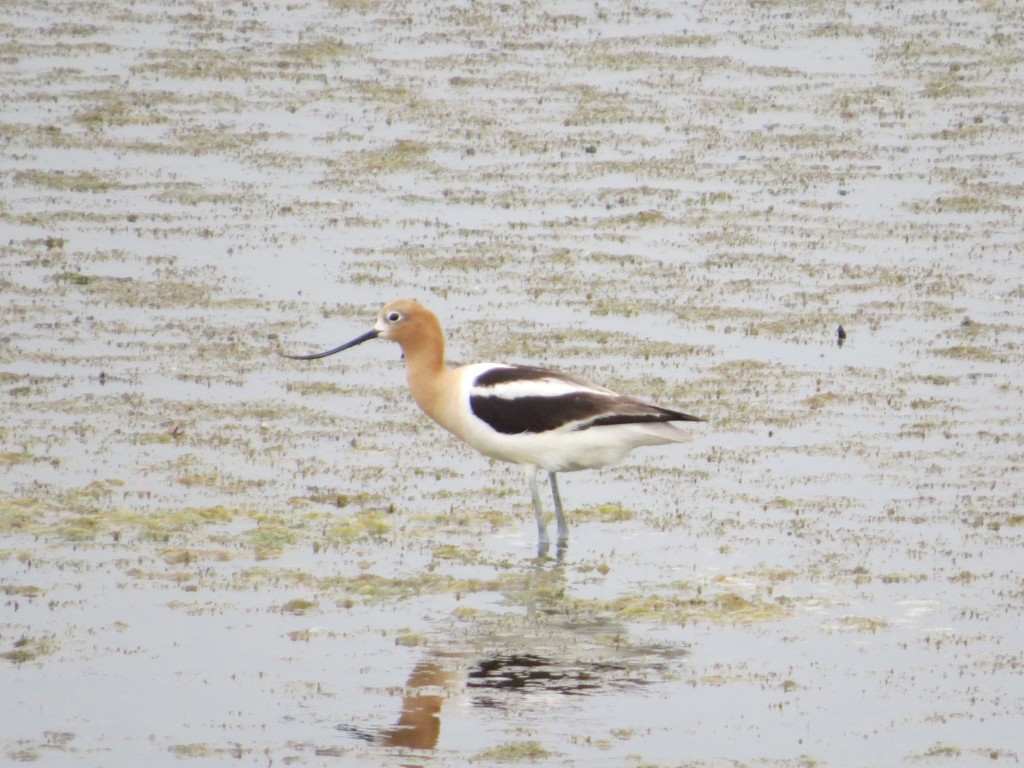 Since the Black-necked Stilts are a good bird for MN and since they had been relocated while I was on my way to the Tern, I decided to check up on them too.  The Stilts would not even be a state bird, but I won’t pass up a chance to see some easy ones that are nearby.  They are still quite revered here and have not attained the trash nickname of ‘Mud Poodles’ as they have in some other states. 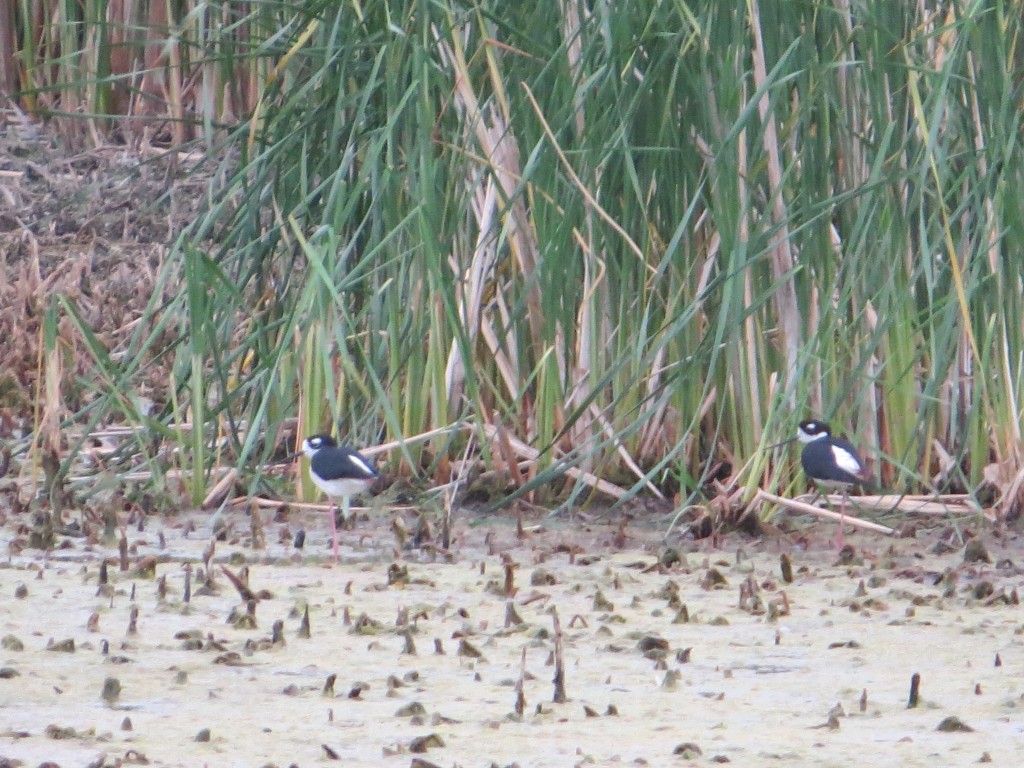 Three great birds, two of which were casual species and one of which was a lifer, made for a great day of birding. Terns out I made the right decision to chase when I did. Unfortunately for Randy and Steve, they were not able to relocate either the Arctic Tern or the Black-necked Stilts the next day.

I still hate Terns, just slightly less so than I did before. The urge to swear when talking about them is gone. Also, I hate Chats now too.

2 thoughts on “A Tern for the Better”