“What’s next?”–that was the ending of my last post. Not even 24 hours after those words were written, I was trying to pick my jaw up off the ground and not even 24 hours after that I was trying to pick it up for the second time. On this busy weekend with a house full of company for Marin’s dance recital, I should not even have been birding especially after I sneaked out for those Whistling-Ducks. And truthfully I’ve been wanting to slow down my birding.  So what happened?

With every good intention, I decided to bring Marin to Robbins Island Park in Willmar on Sunday morning.  It was a beautiful day, company had just left, and she had had a very busy weekend with one performance done and another to come that afternoon.  We were going to the park to have fun.  It wasn’t really about the birds.  I even left my camera at home. Sure, I brought my binoculars along–after all, I was keeping an ear and eye out for my county Black-throated Green Warbler while at the park. Migration is still going on (sort of).  I truly did not care about any other bird at the park.

After playing on what’s left of the playground equipment there, Marin wanted to check out the swimming beach on Foot Lake.  I followed her there unenthusiastically–it’s a gross beach and not very interesting bird-wise. Unless Canada Geese are your thing. A quick flash of wings of a whitish shorebird caught my eye at the far end of the beach. Why not–might as well check it out with the binocs.  There was nothing else to do.  Now I tell you that, truly, there have only been three times where I have pulled up binoculars on a bird that is unidentifiable to the naked eye only to be gobsmacked by what the optics revealed. This was one of those times. The little shorebird was a freaking endangered PIPING PLOVER!

And then it hit me. I have no camera, I HAVE NO CAMERA! I hit the phone hard calling up all the local guys one after another.  Only Steve answered, and I told him to hustle over and bring a camera.  I also called Melissa and had her mobilize to bring me my camera. We had to document this for our county. Marin was a champ and patiently waited as I kept my eye on this bird until “reinforcements” could arrive.  It finally dawned on me that I should grab a crappy cell phone pic just for documentation.

Steve got there in minutes (which felt excruciatingly long) and was able to snap some pics of this bird that was a lifer for him and a state/county first for me. At least we had the documentation wrapped up; now I was antsy for my camera so I could photograph this bird that was not even 20 feet away. Once I placed that call to Melissa I knew my wait would be 20-30 minutes (an eternity it seemed). No worries, Steve and I visited as we enjoyed the sight of the Plover roving up and down the shoreline feeding the whole time.  It was very content. Then Steve uttered some sickening words: “There it goes!” We watched it fly across the park to another part of the lake, unsure of where it went. 30 seconds later Melissa pulled in with my camera…

Steve and I searched for awhile and then decided to hit the beach one last time just in case it returned. And wouldn’t you know, it did!  Forget regular documentation, it was crush time. 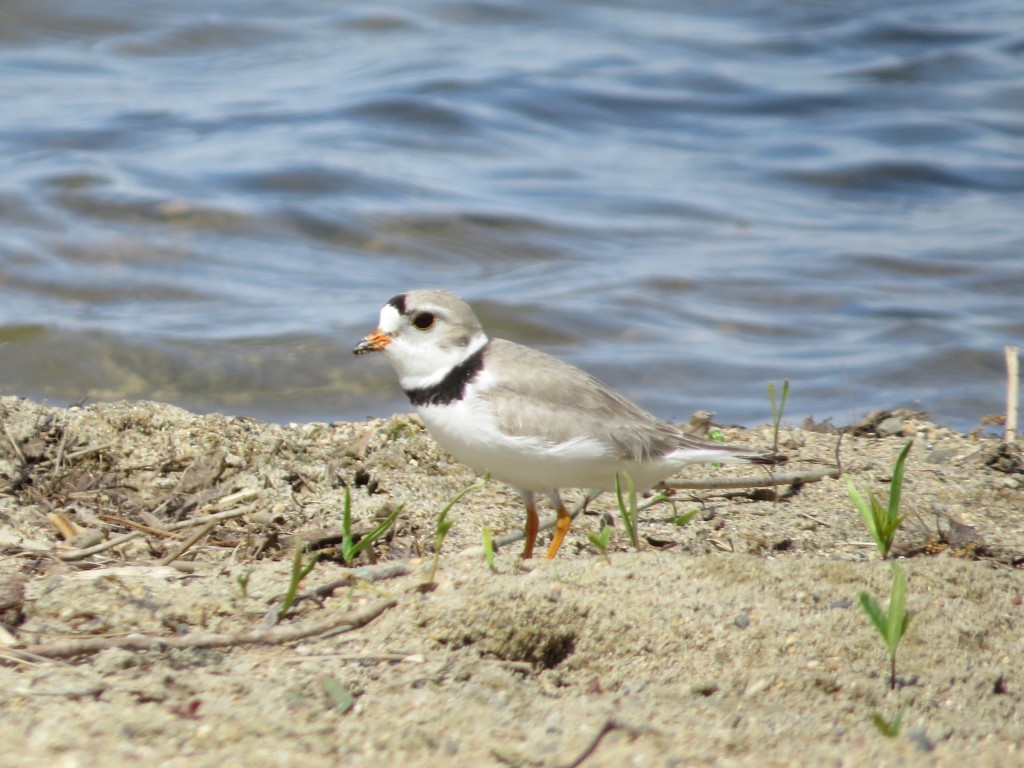 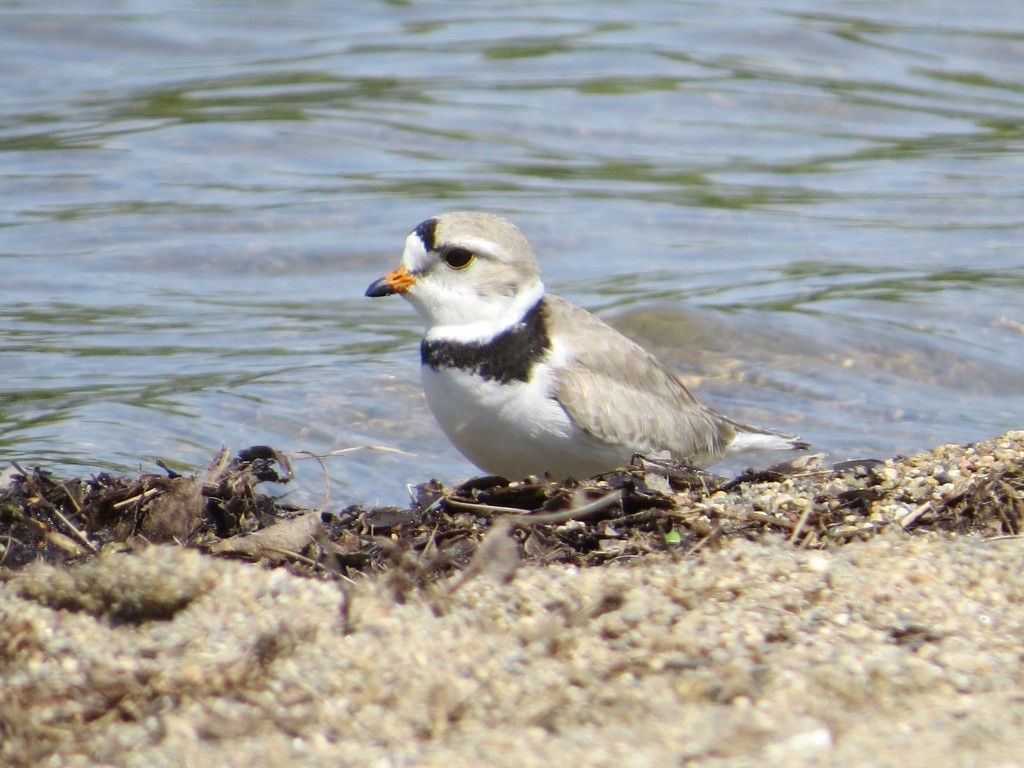 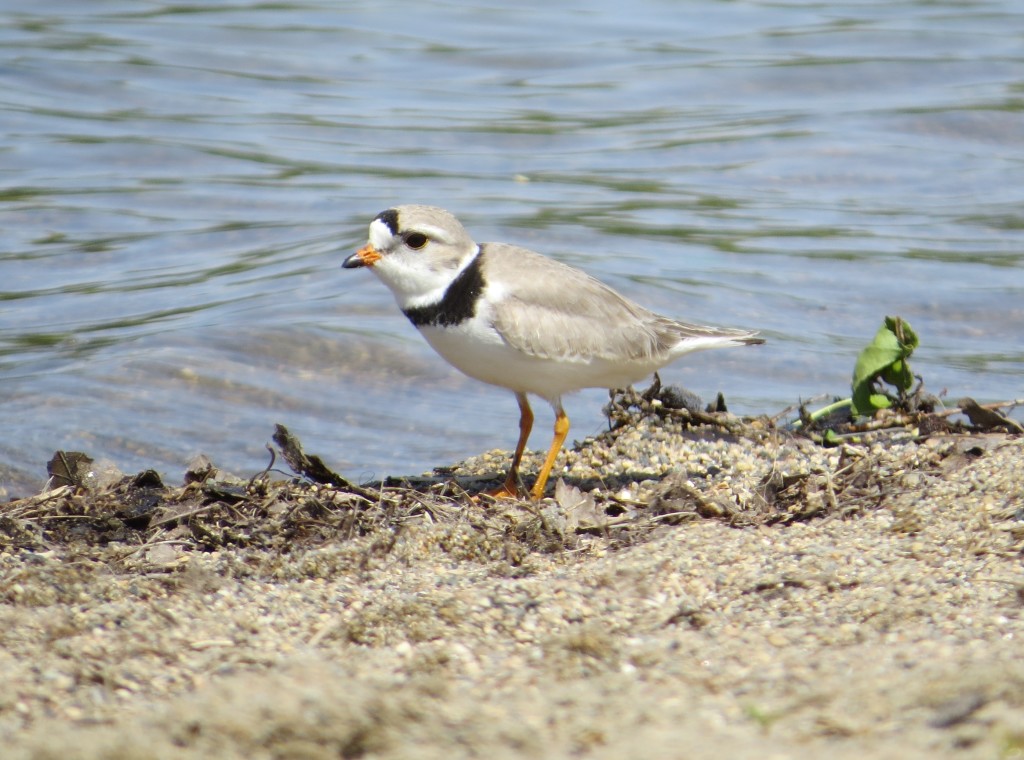 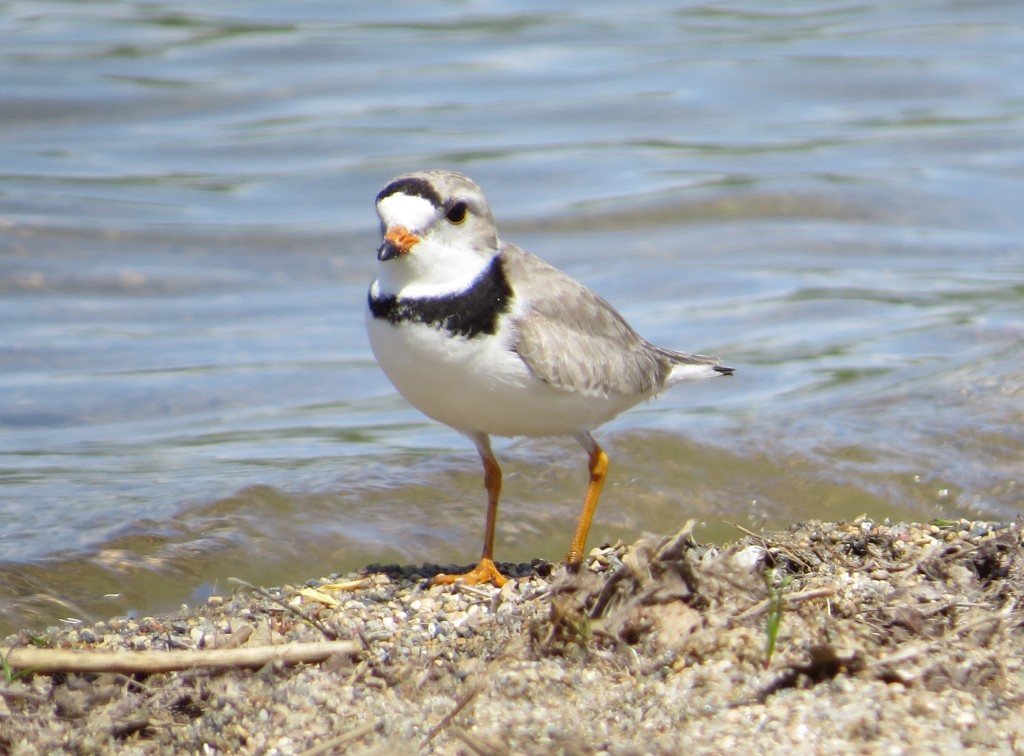 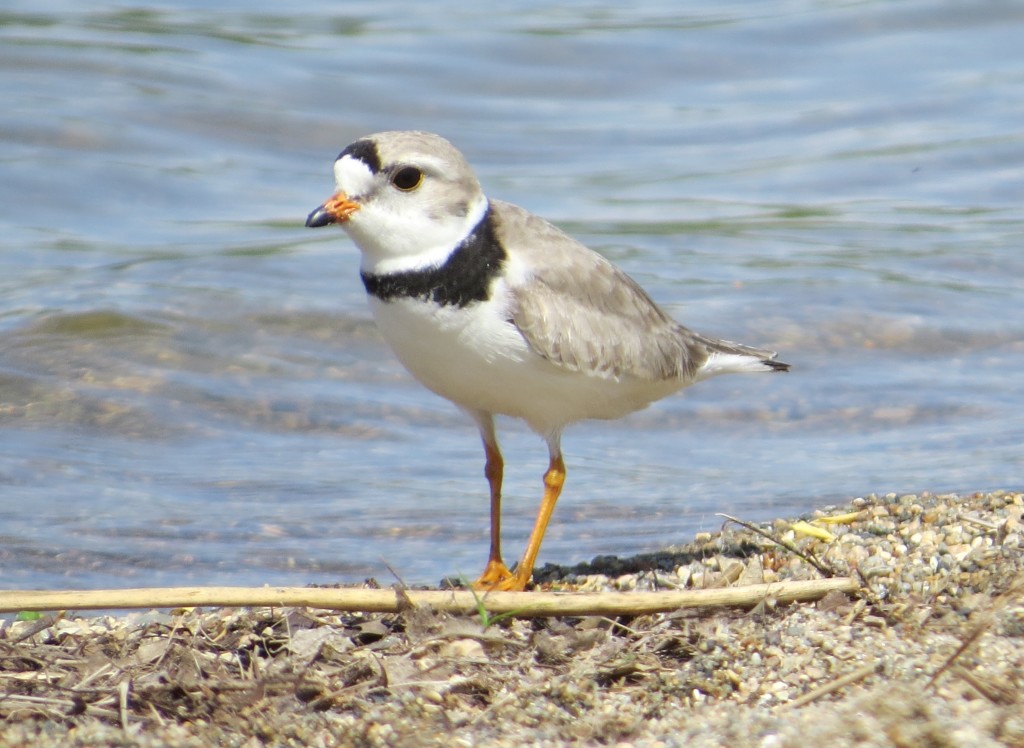 I still cannot get over this opportunity. I got my Piping Plover lifer last summer on Wisconsin’s Long Island right near Madeline Island in the Chequamegon Bay area of Lake Superior.  I paid a hefty sum of money to charter a boat to get a brief, bobbing, distant look at this special bird. Now I had a lengthy look at one at my feet at home for free. Even better was that other birders were able to come out and enjoy this bird with some even getting their life looks at it.  So, thanks, Mar, for taking me to the beach! It just goes to show that any bird can show up anytime, anywhere. Just when you dismiss a park as being mediocre, it totally surprises you.

Speaking of more surprises, after I dropped the kids off at school on Monday morning I went out to our county’s shorebird spot. While I was scanning for shorebirds, a White-faced Ibis dropped out of the sky and landed right in front of me!  This is a rare bird for our area and one I never expected to get for the county. 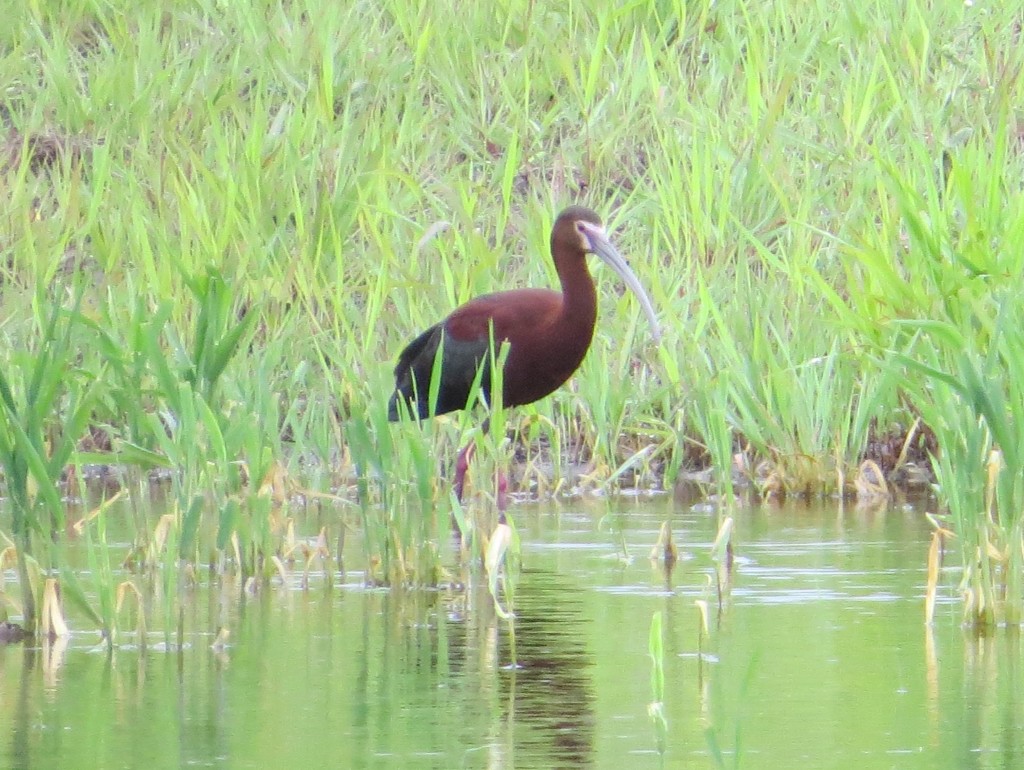 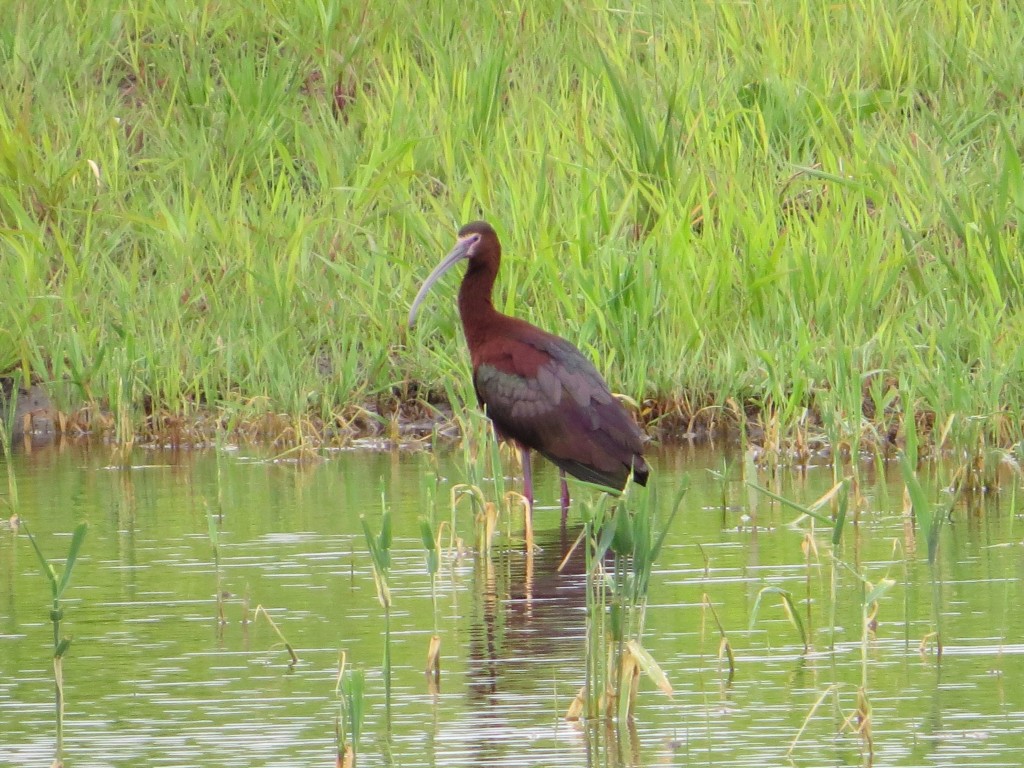 I called Steve, and he was just about to ditch work when it all the sudden decided to fly away, never to be seen again. I guess I was in the right place at the right time.  Steve wasn’t interested in the only other shorebird there, a Stilt Sandpiper. 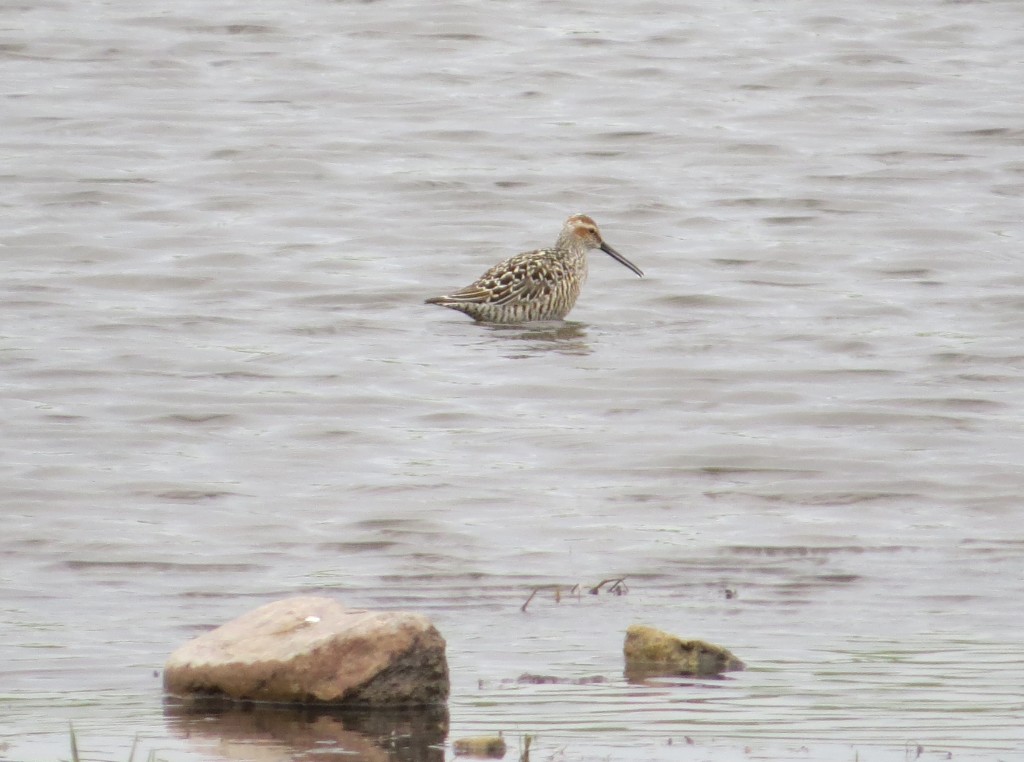 It had been an epic two days of local birding on the heels of a very active vagrant season for me.  I really do want to slow the birding down, but the birds are not making it easy on me. Even when I returned home after the Ibis, I was greeted by the cheerful song of a new yard bird. And it wasn’t just any bird, it was the Chestnut-sided Warbler, the very bird that got me addicted to this hobby in the first place. 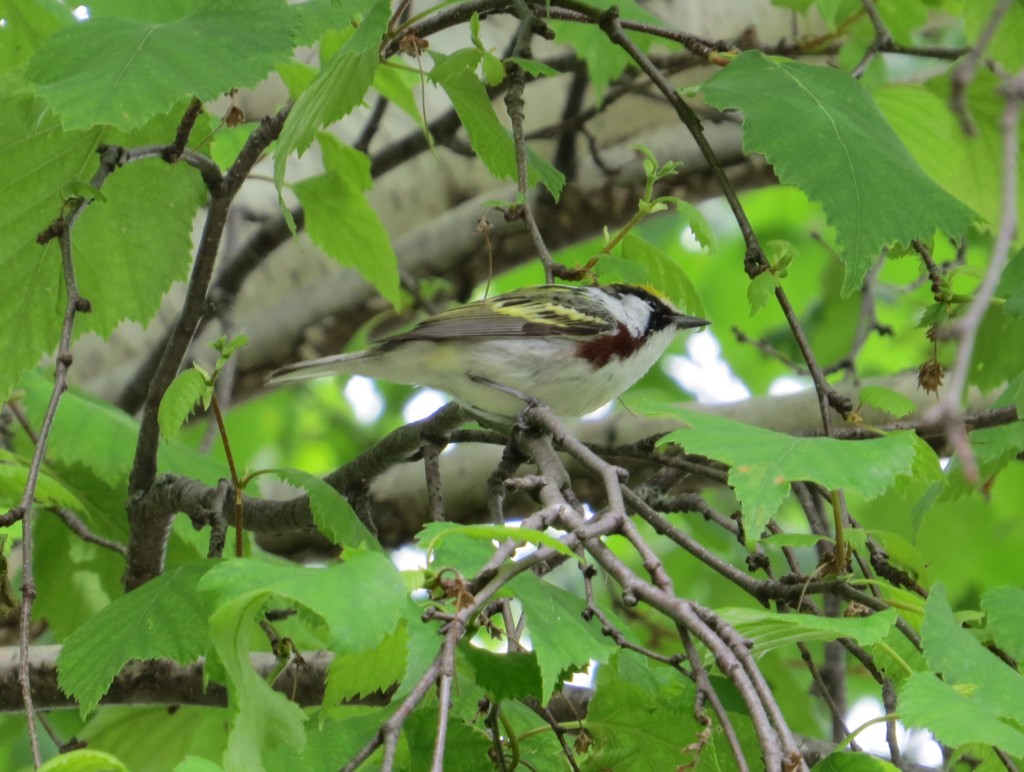