May is always a busy month in this household with all four of us putting the wraps on another school year all while balancing a host of activities, recitals, etc.  And of course, this is coincidentally the peak of migration. It’s quite ironic that when I have the most free time come June, the birding starts to die down and settle into the rhythms of another nesting season.  Actually, though, I’m looking forward to some key searches in those slow summer months.  I have not been too uptight about migration since there are only a handful of migrants I’m looking for.  Vagrants, on the other hand, throw a monkey wrench into everything.  Let’s just say that it’s been a very birdy weekend for ABWCH and none of it has been by design.  Let’s recap it by day:

I found myself home from work with a sick Evan.  Marin was okay, so Evan and I dropped her off at school and then took a detour on the way home.  We stopped by one of the area’s many marshes to take in the sights and sounds of the resident marsh birds that have returned: gliding Forester’s Terns, floating American White Pelicans, singing Red-winged Blackbirds, rattling Marsh Wrens, and caterwauling Yellow-headed Blackbirds. 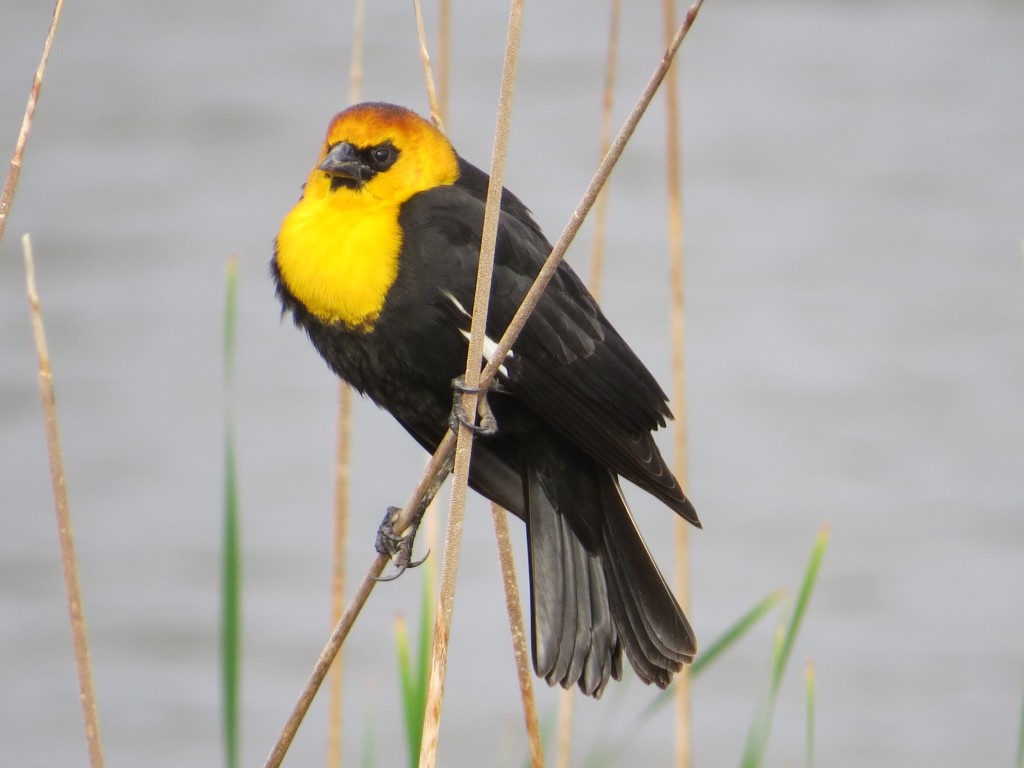 Moving on to the shorebird spot, I cruised by and saw…nothing. Just as well, I better get my sick kid home. The kid may not have been 100% but his eyes still worked because as I started to drive away he told me he saw an American Avocet!  Somehow I missed it, which is crazy because it was almost right by the road giving us crushing looks. 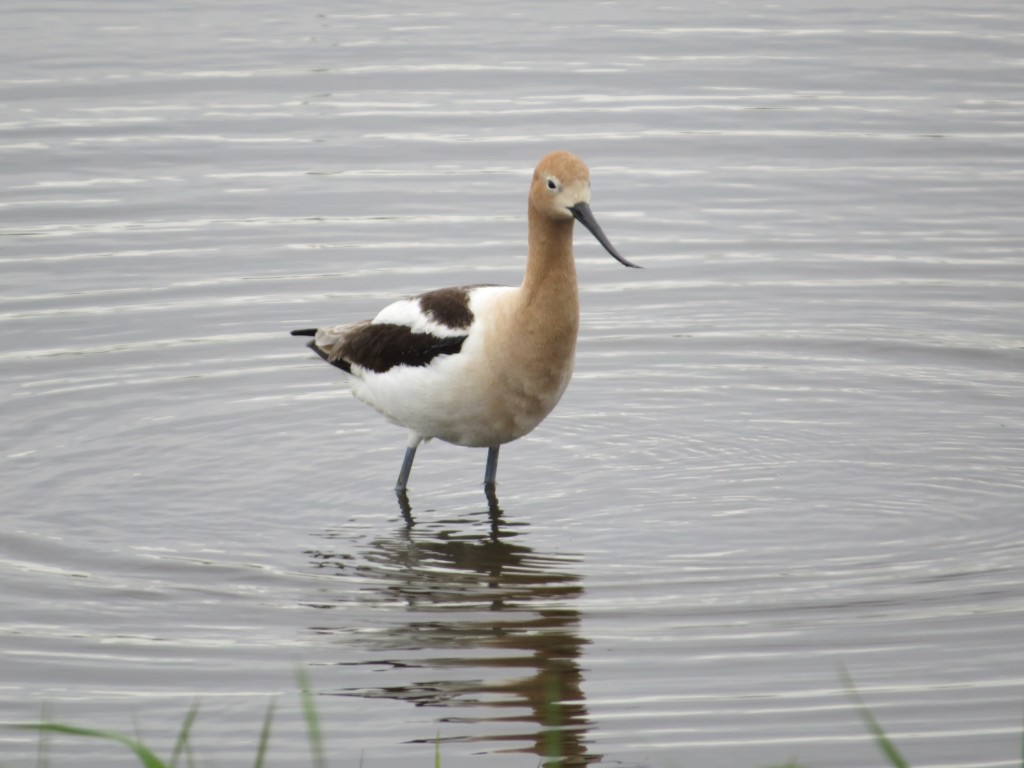 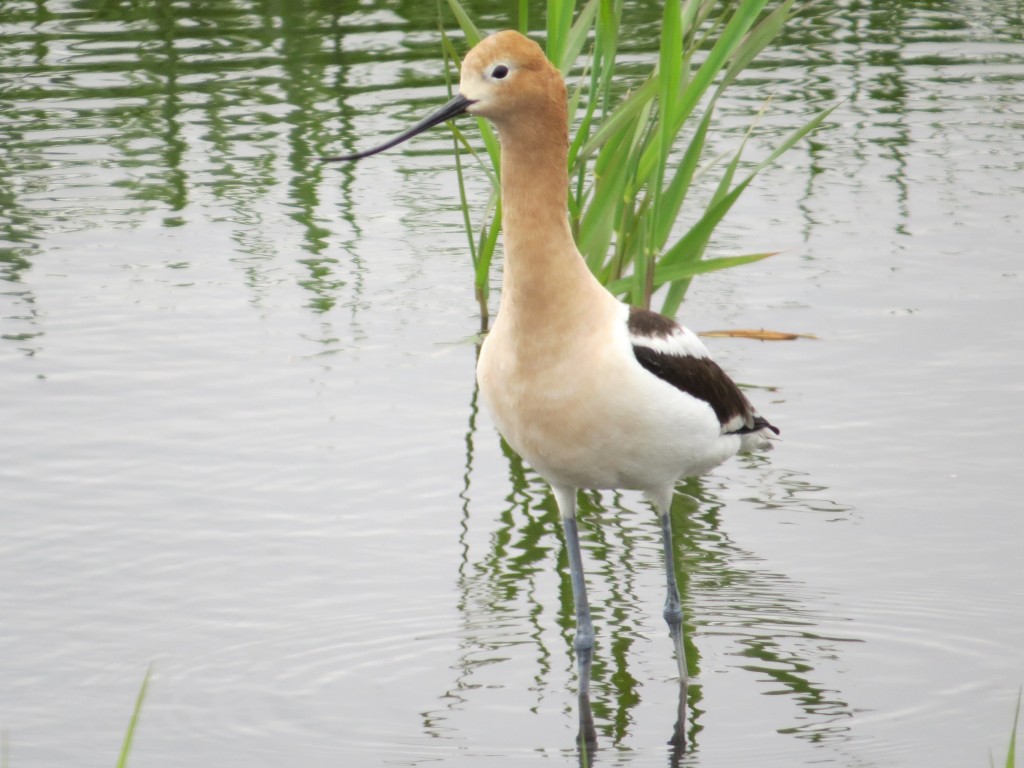 I was hoping for lifer Short-billed Dowitchers, but an Avocet is a nice consolation.  Evan and I enjoyed watching this bird for 15 minutes while it chowed down.

It was a fun moment together as we watched and recalled our excitement over our first-ever Avocet a couple years ago.

Evan was back to normal and back to school.  He even sang at his school’s songfest which I attended and then promptly slipped away afterward.  I had a solid tip from ABWCH reader, Adam Roesch, on a Snowy Egret his friend Matt found about a half hour from me. So I chased this would-be state bird…and dipped. It was a great Egret spot, so this story may be continued…

It seems more and more people are into birding than ever and are scouring all kinds of locales and turning up good birds.  Seeing as how it was a weekend during migration, I honestly approached the day with a “I wonder where I’ll be chasing today” mentality.  I didn’t have to wait long.  News came in of a Summer Tanager from Murray County in southwestern Minnesota.  Summer Tanager is rare regular for MN but has eluded my life list so far. Since it was a very cold day with nothing else to do, the fam decided to join me on this chase that would take about 5 hours round-trip.

We arrived at Janet Timmerman’s rural yard that was an oasis for gobs of migrating birds and one lost Tanager.  Trees were crawling with Warblers and Orioles, and the ground was covered with migrant Sparrows: White-throated, Harris’s, and White-crowned.  Thrushes were also everywhere and distracting me from the task at hand.  One of the dozen+ Swainson’s looked a little off…Gray-cheeked! 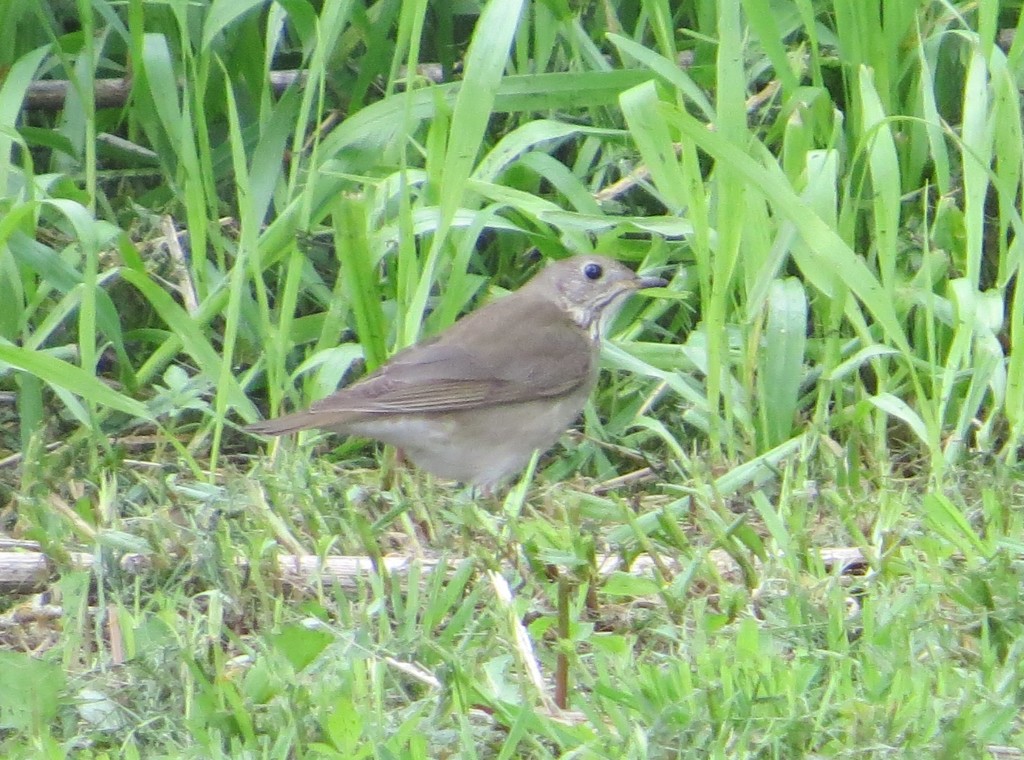 My addition of Gray-cheeked Thrush to my life list has always been tainted with doubt–mostly because I never obtained a photo to back up my sighting. While the kids admired the local Chickens and while I was Thrush sorting, I was still keeping an eye out for the main thing.  It was proving harder than I thought, especially since other birders saw it just a minute before I arrived.  Finally I spotted the tie-died wonder, a first year male.  It wasn’t the coveted bright red adult male, but a cool lifer nonetheless. My camera had difficulty focusing on its mottled plumage. 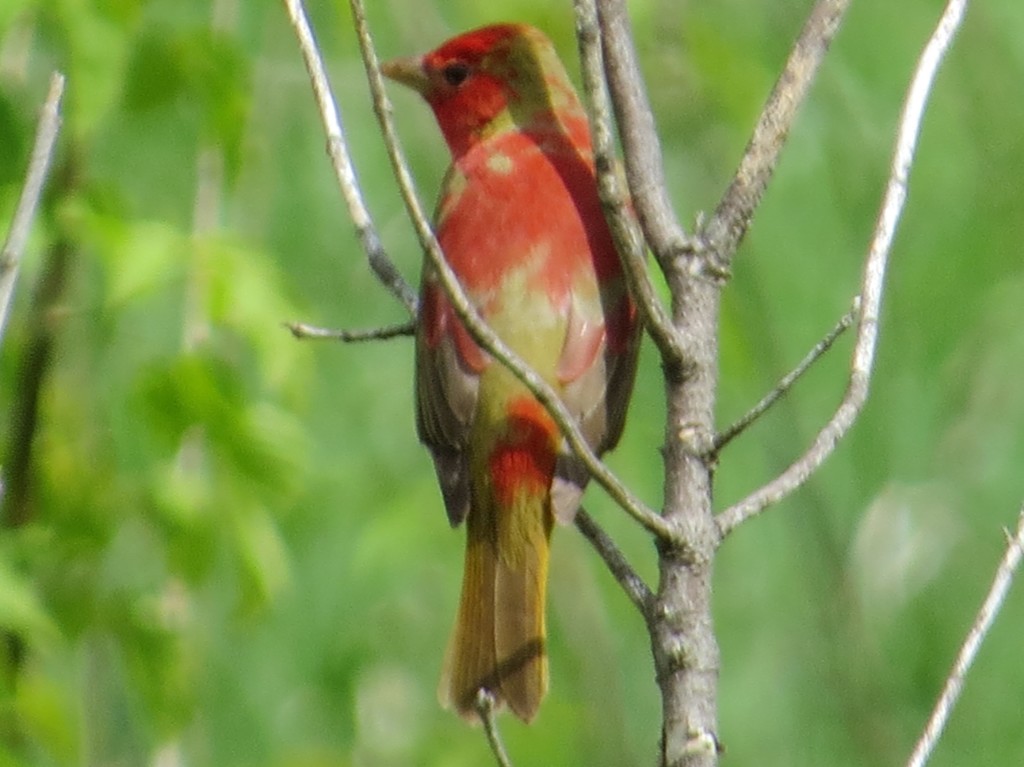 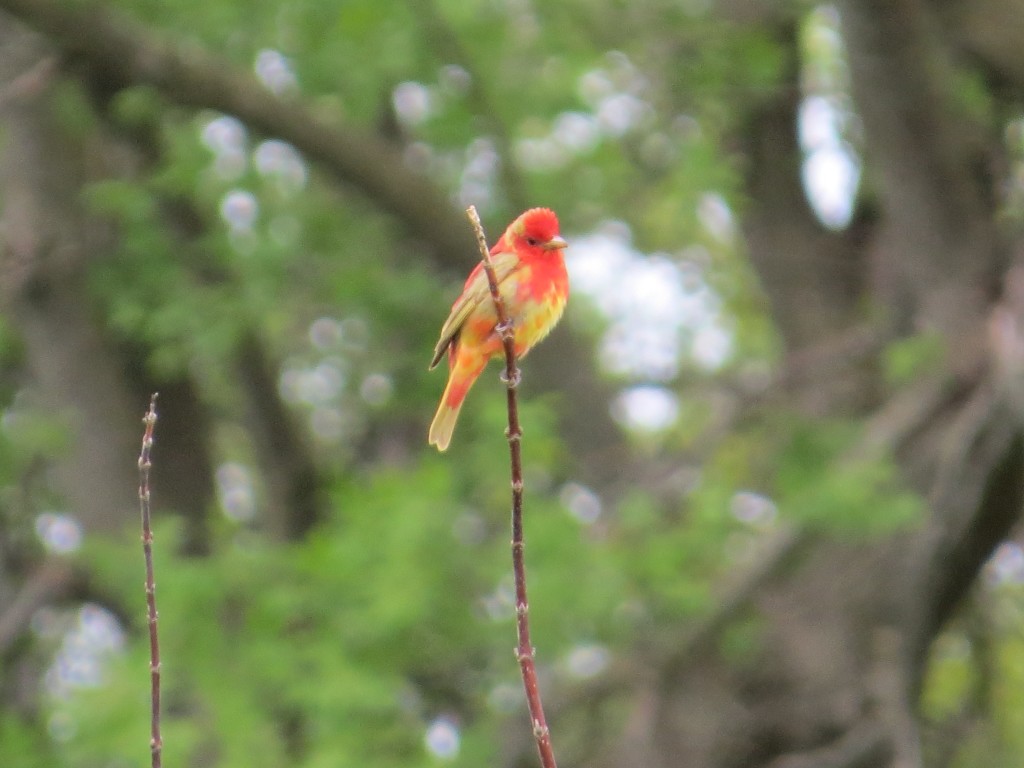 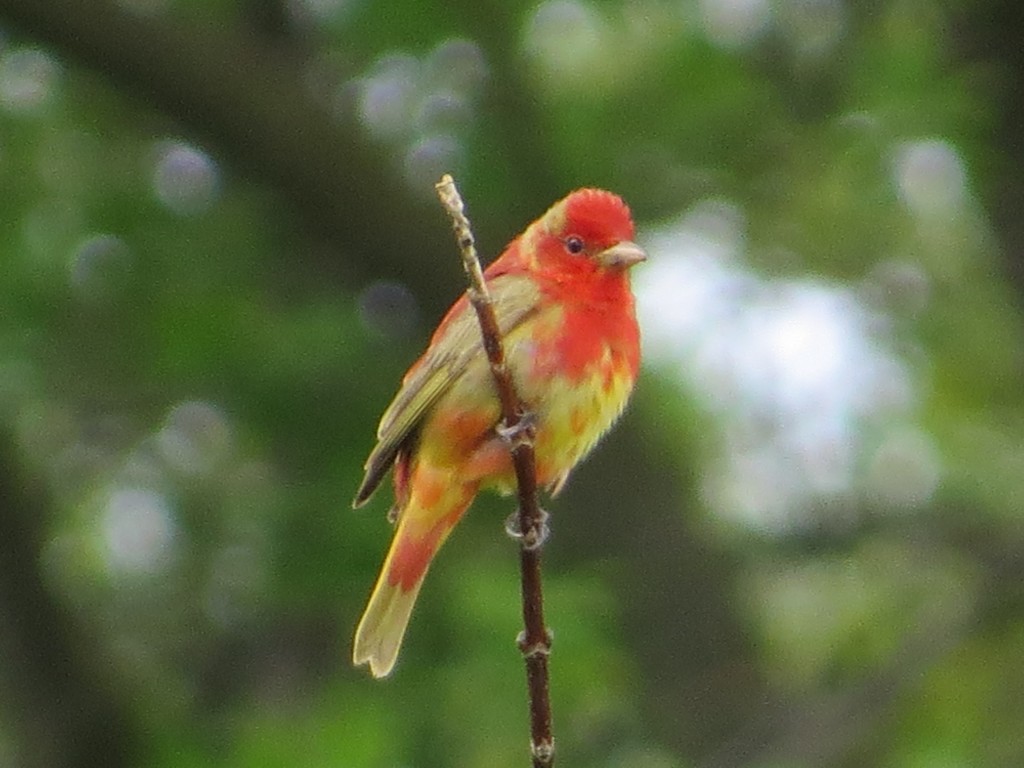 After thanking Janet for sharing her bird, we were on the road for the two-hour, uneventful trip home.  We did stop in Marshall to grab a pizza and walk the dog at a park–Marin was pretty excited to see a wedding party.  I kind of figured it was a boring day for the kids.   Apparently our Kindergartner and soon-to-be 1st-Grader thought otherwise as she penned us a note in the back seat: 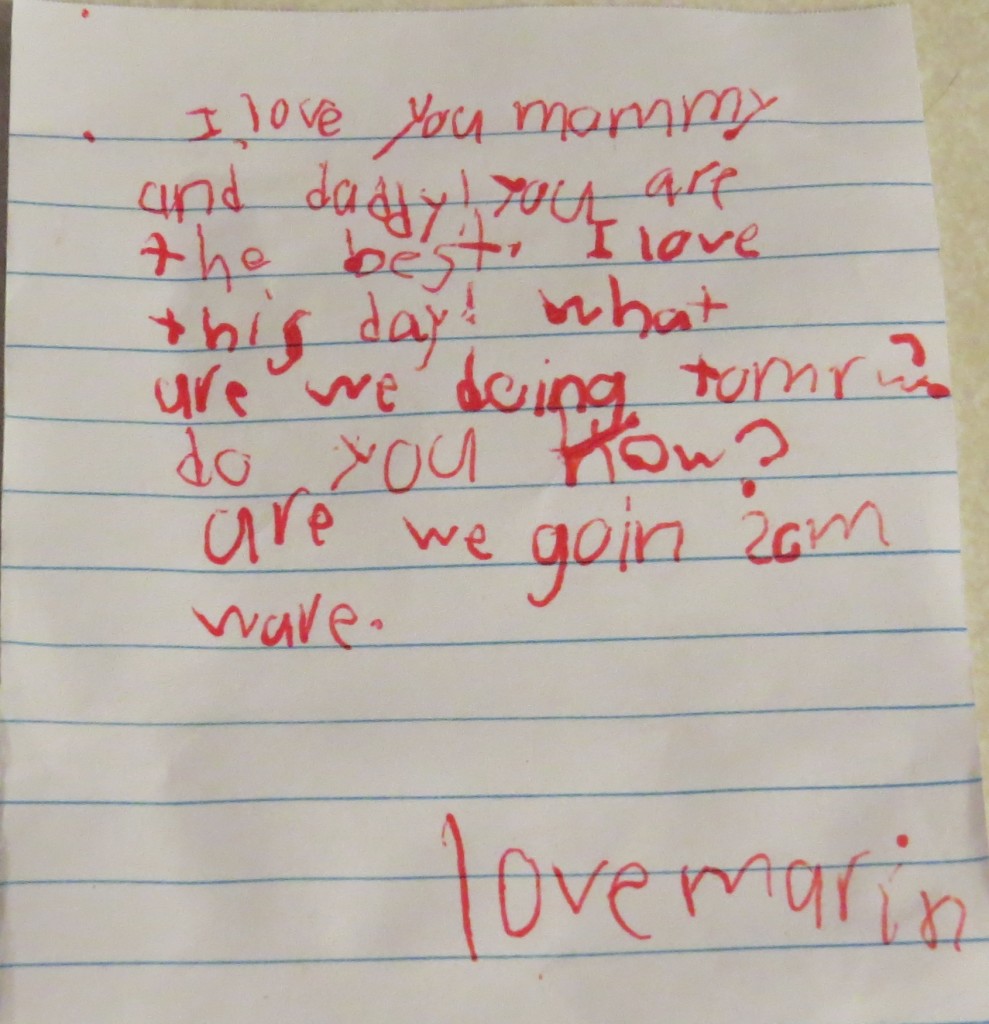 It was a some nice family time and a successful chase. Life could go back to normal the next day…or could it?

I woke up wondering if I would be bringing Marin on another adventure.  Sure enough, my phone rang that morning.  It was Ron Erpelding.  The imagination goes crazy when you see that Ron is trying to get ahold of you.  Ron informed me that he had a Pacific Loon in BREEDING PLUMAGE waaaay down in Rock County, the very southwestern corner of the state.  I had just returned from a long-distance chase that direction the day before, but the pros of another chase were winning decisively over the cons.  Pacific Loon is annual in MN, but mostly on Lake Superior in the cold months. The thought of traveling 2.5 hours to see a bird in breeding plumage on a 2-acre pond in the spring was far superior to the alternative of traveling 3.5 hours to Duluth to see a drab bird on the gargantuan Lake Superior in the winter where a) the Loon could easily disappear or b) appear as a speck on the horizon or c) I could freeze to death.  It was a no-brainer.  Chase on.

The family opted not to return to the southwest with me.  I don’t blame them.  As I headed back down the same highway as I did the day before, I wanted to cry when I passed the turn-off for the Tanager spot. If only I could have combined trips! Nevertheless I eventually reached my destination, an old gravel pit filled with water and one very sexy Loon. 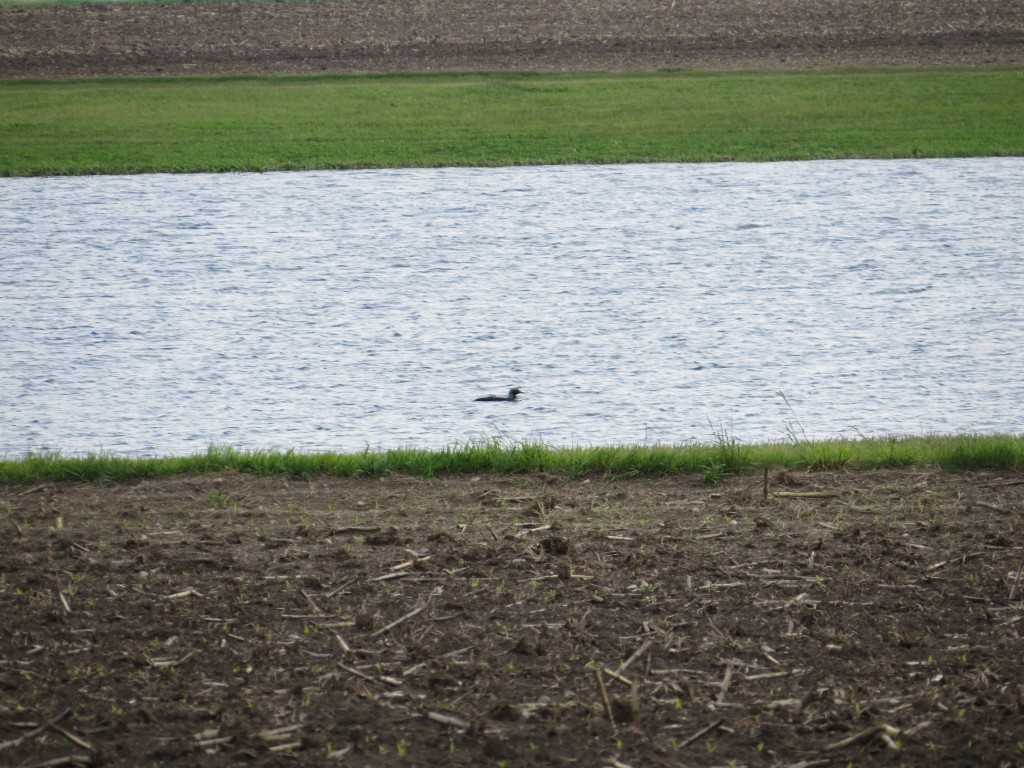 I was not anticipating such a great distance to the bird.  The distance coupled with heat waves emanating from the soil made photography difficult.  The temptation to trespass was real. But those tiny green specks in the soil are brand new corn plants. I did not want to tick off some farmer.  I did ask a couple of neighboring residents about who owned the land and was bummed to find out the owner didn’t even live around this spot.  So, I did the best I possibly could given the circumstances. 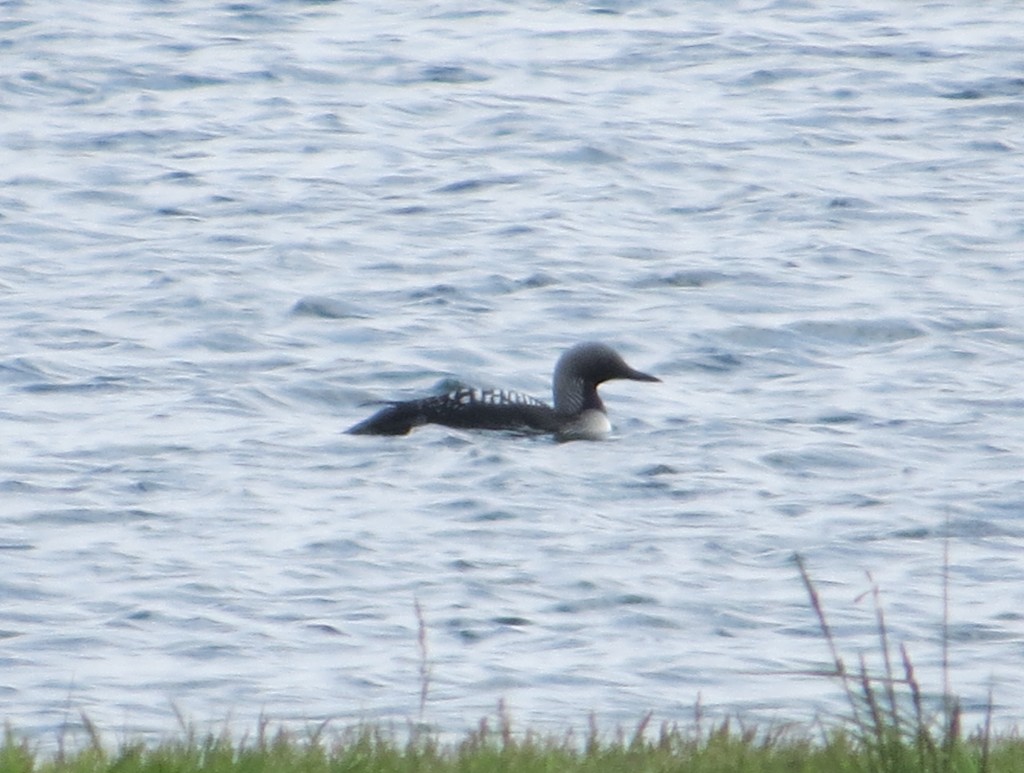 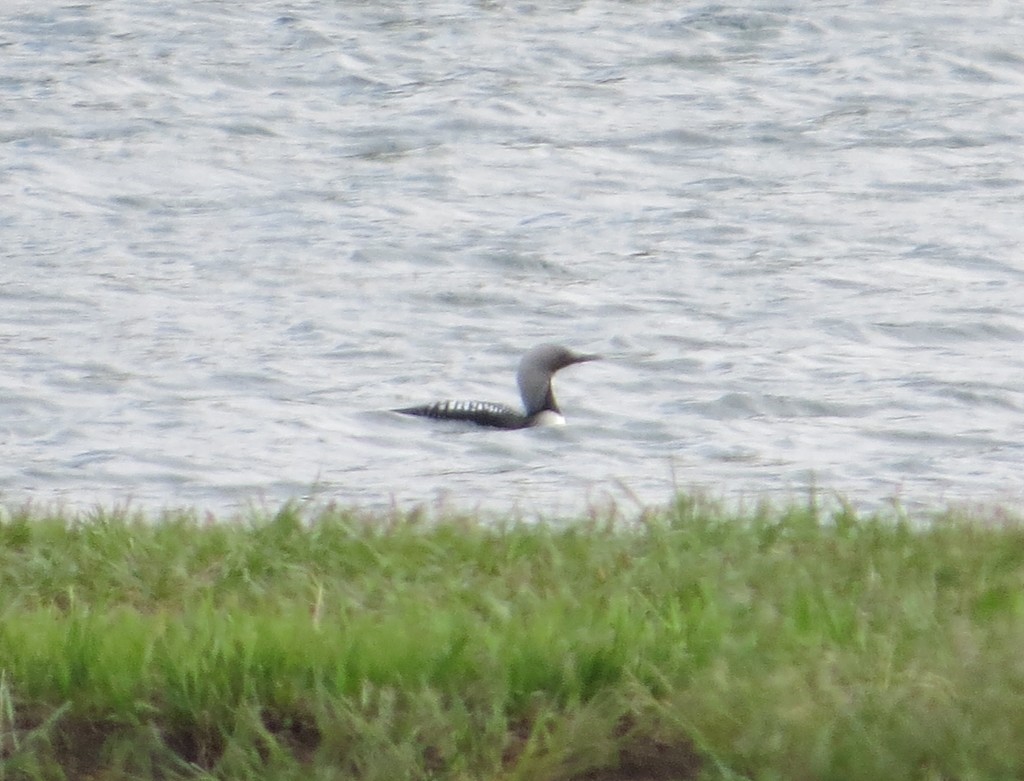 Despite the distance, this was a thrilling bird to see.  It is a life bird I always imagined getting as a speck on Lake Superior and being nothing more than a check mark on my life list. I had another fun find while seeing the Loon: Janet Timmerman whose yard I was just in the day before. We shared a laugh over the double chase and enjoyed the Loon together for a bit.

After watching the Loon, I popped into neighboring Blue Mounds State Park two miles to the west to try for a reported Northern Mockingbird.  I see Mockingbirds annually in Arizona, but I still needed the rare-regular for my Minnesota list.  The bird had been hanging out by the ranger station at the campground.  It took me a half a minute to find it. Good thing too–I was already pushing it for time in order to be home for kids’ bedtimes. 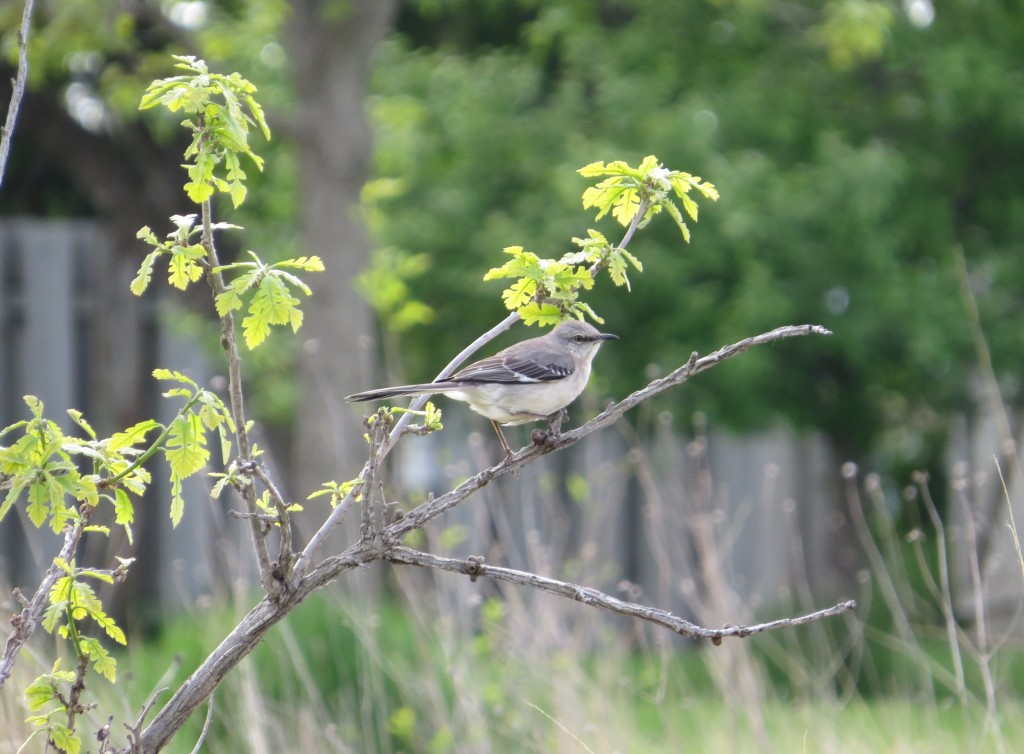 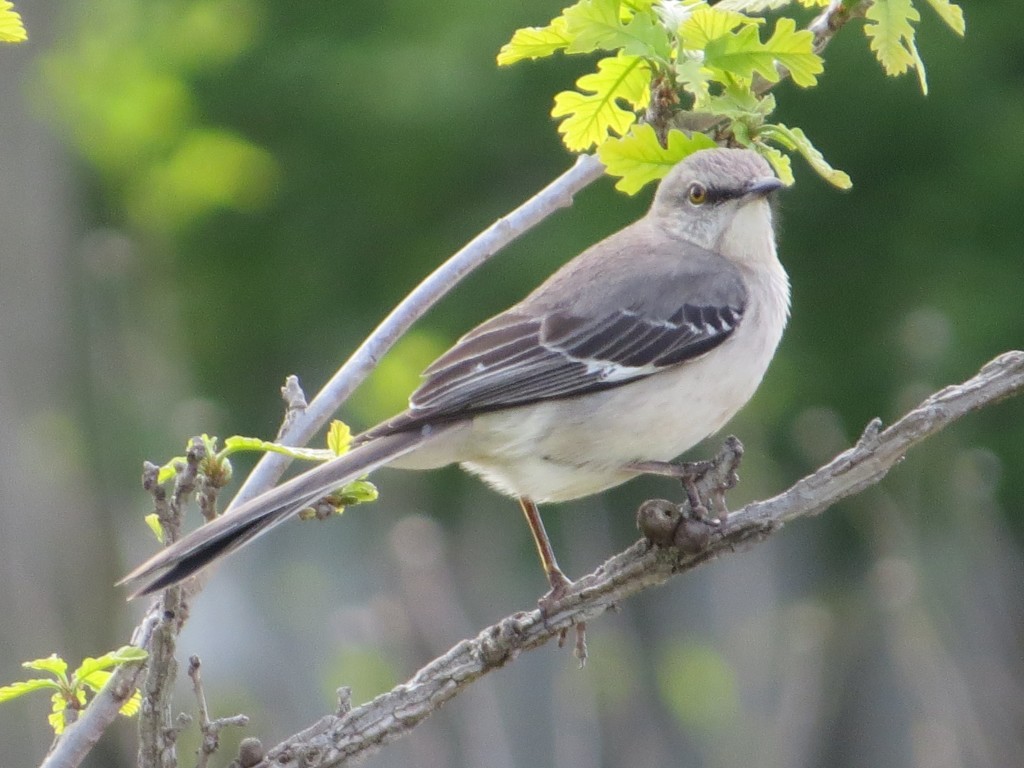 Rock County redeemed itself from that awful, miserable Least Tern chase a couple years ago.  It was a sweet 2-for-1 grab this time.  The good times kept rolling, too, when I spied a rare-for-this-area Swainson’s Hawk fly over the highway halfway home. 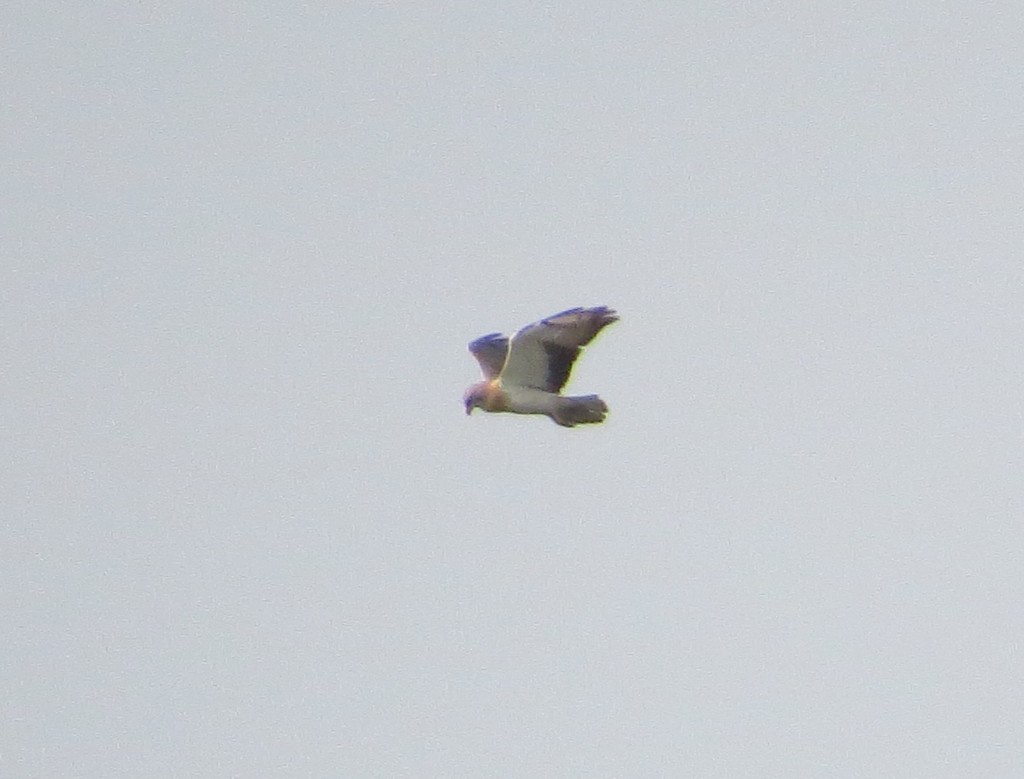 Before I departed for the Pacific Loon chase on Sunday, I promised Melissa I would stay home on Monday, a scheduled day off work.  This act on my part is almost certainly the reason a Little Blue Heron showed up in Duluth today. Doh! I did, however, sneak out for a bit after the kids went to bed and finally claimed Short-billed Dowitcher for my life list.  Joel had seen some Dowitchers at the shorebird spot in our county but couldn’t ID them.  I was able to see them fly away and hear the soft tu-tu-tu calls, clinching the ID. 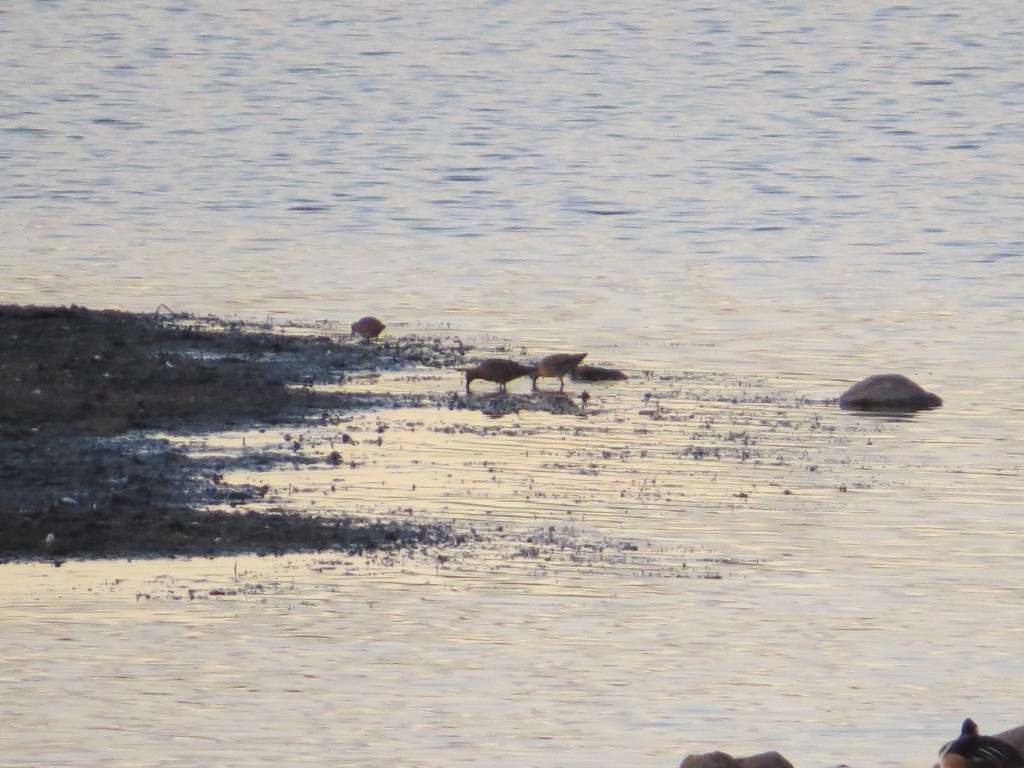 With the Dowitcher locked up, I’m waiting around and hoping for one other migrant for an inconsequential add to my county list. But afterward, we’ve got some fun summer searches ahead.  In the meantime, maybe some other fun stuff will show up.

2 thoughts on “Time for Summer”