Obsession has put down deep roots here at ABWCH over finding Eastern Screech-Owls in anticipation of finding one for TOBY (Tommy’s Owl Big Year) in June.  The more I researched and chatted up the wise old birders, the more nervous I was getting about our prospects for this bird in June–sightings drop off dramatically in the summer months. Meanwhile, Tommy DeBardeleben had been blitzing toward his goal of seeing all 19 Owl species that can be found in the U.S., seeing 15 of them already by April 7th. Accomplishing this unique goal was no longer a pipe dream, but now a very realistic possibility.  TOBY could not fall apart over the relatively common ESOW.

Seeing as how we had a “bird in the hand” with the Lake Harriet Screech in Minneapolis, I got the crazy idea to explore the possibility of flying Tommy in for a lightning-fast trip to knock out this Owl. To my amazement, airfare was ridiculously cheap. I proposed my idea to Tommy and like the proverbial tossed spaghetti, it stuck.  After coordinating work schedules on both ends and shopping for airfare, Tommy was all set with a $127 plane ticket and a round-trip that would only take 21 hours from the time he walked into Phoenix Sky-Harbor Airport to the time he walked out. Tommy is likely the only birder to ever make a cross-country chase just to see an Eastern Screech-Owl.

Last Tuesday after I tucked the kids into bed, I drove to the Cities and crashed at my brother’s place for a few hours.  Tommy’s plane got in at midnight, and I was there to pick him up by 2:45 AM.  We would be Owling right away.  We traveled to Chimney Rock Scientific and Natural Area near Hastings to search for Screech-Owls in the dark.  Several had been reported here in the past.  However, as soon as we got to the location, we knew it was likely a lost cause–wind was gusting up to 20 mph.  There would be no way we could hear Screech-Owls vocalizing.  We Owled on regardless, hoping to get lucky.  The only bird we had any luck with was a Dark-eyed Junco that was equally stunned to see us. 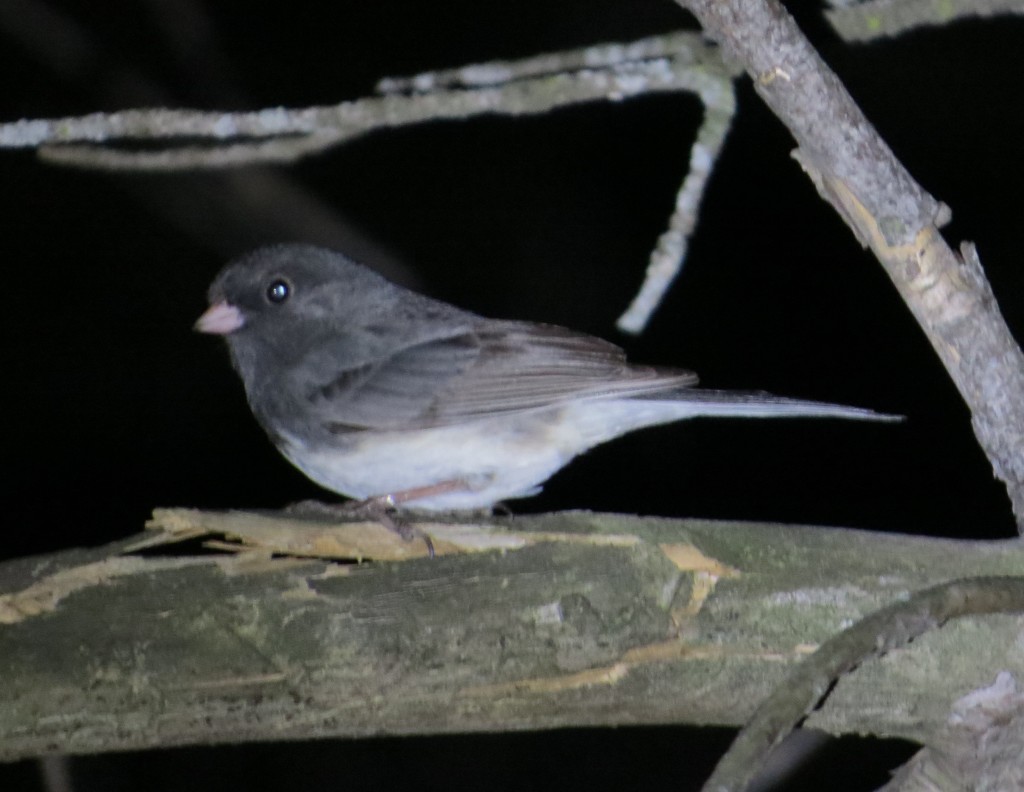 After an hour or so in the wind and spitting rain we gave up and decided to make our way to Minneapolis so we’d arrive at the location of the famous Lake Harriet Screech just before dawn.

Once we were at Beards Plaisance, a park on the southwest side of Lake Harriet, I immediately checked the famous roosting cavity with my flashlight.  Nothing. Then I checked a couple of White Pines where it can be found, and again did not find it.  It was somewhat discouraging, but Tommy and I were still confident the famous Screech was near us…somewhere.  I had given up on searching until it was daylight out when Tommy had called out that he had it! Lifer Owl #18 for Tommy, and #16 for TOBY! In the pre-dawn light Tommy caught a glimpse of it flying right by him as it was being chased by a Robin. From that point forward, we spent a great deal of time enjoying the Eastern Screech-Owl.  Prior to this I had only ever seen this species in a hole of some sort.  To see one out in the open and being very active felt like I was seeing this bird for the first time. 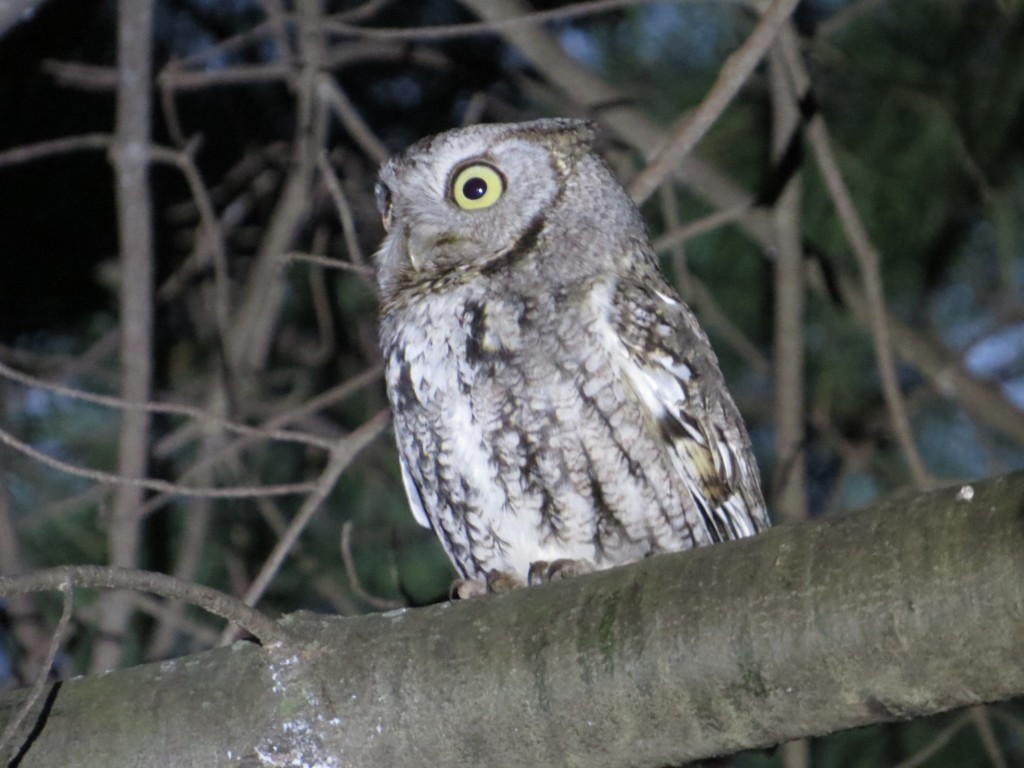 The Owl vocalized often and moved from perch to perch.  It was simply awesome. 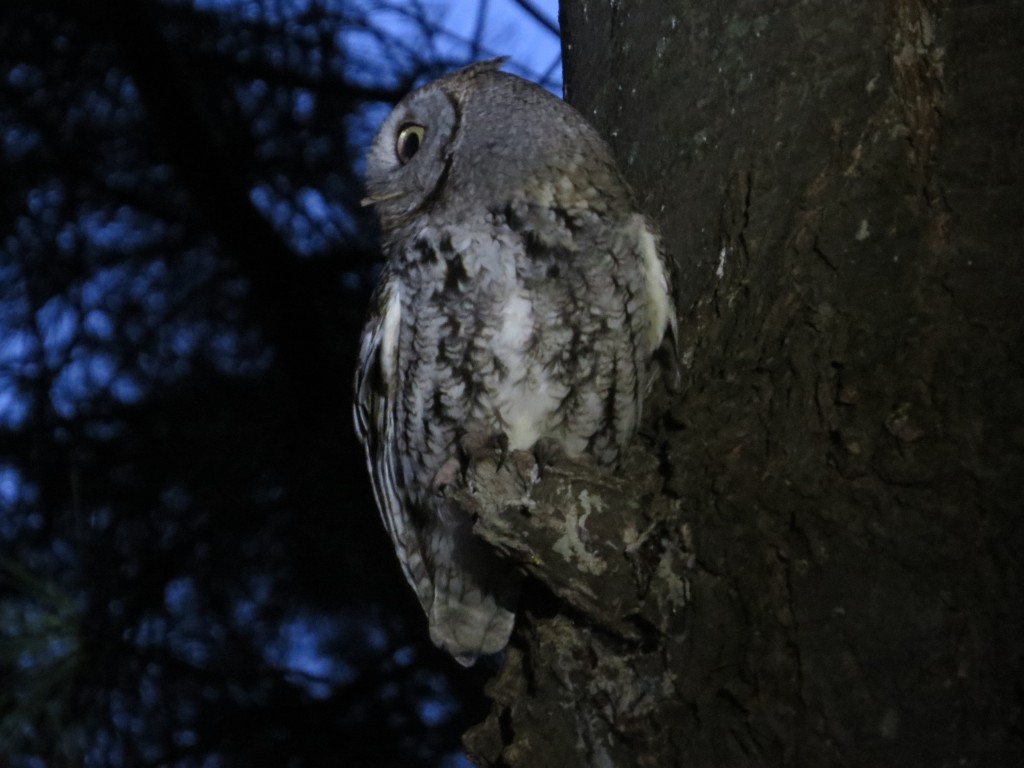 I was amazed by how hyperactive this Owl was–it pays to observe a nocturnal bird nocturnally!  Here’s a short video where you can see what I mean.

Watching and photographing this Screech-Owl alongside Tommy was incredibly fun.  We got to observe this Owl as few people do since most people come during the daylight hours and see a sleeping bird. 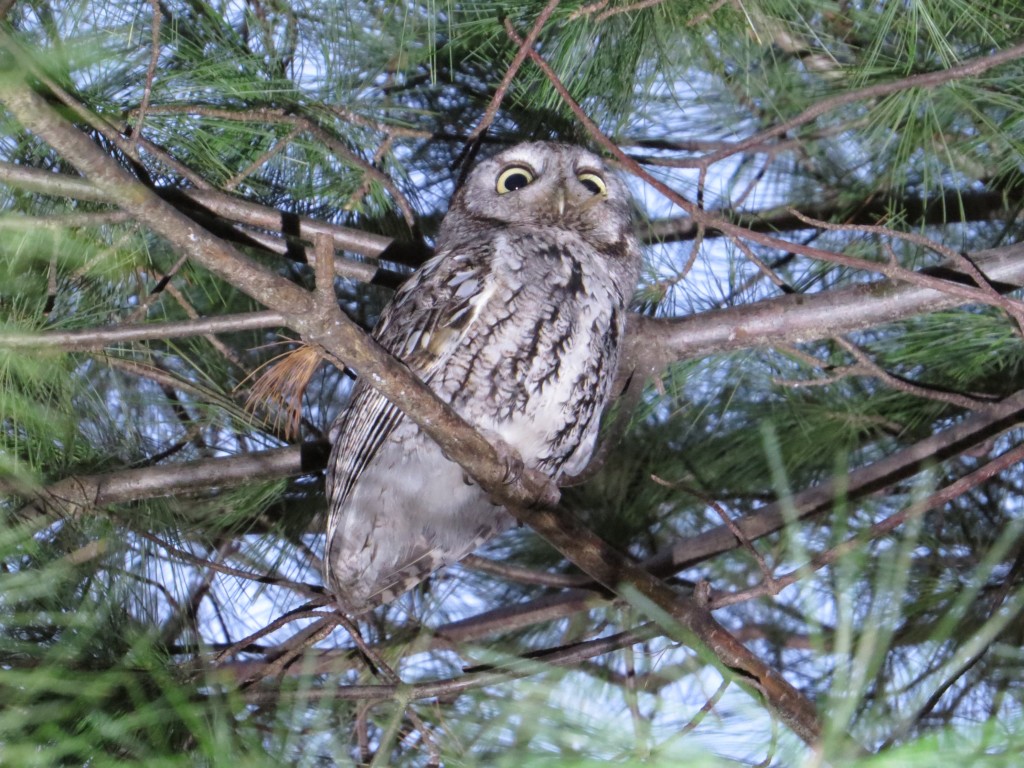 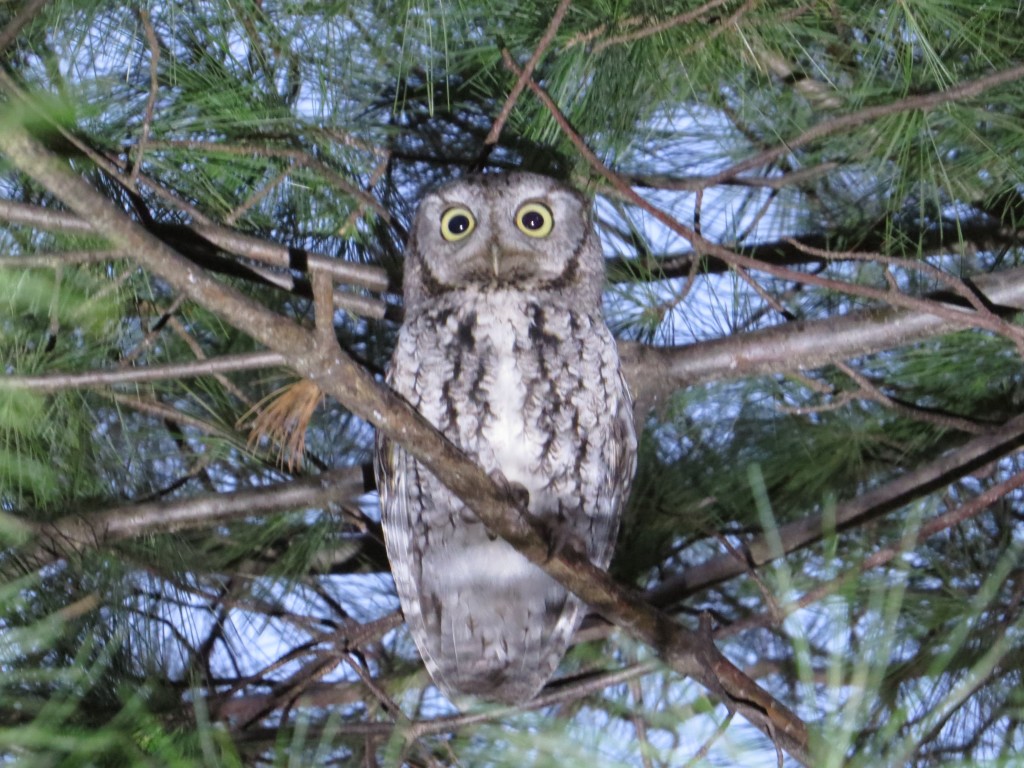 This bird called often with its monotonic trill.  Hearing it was a new thing for me and just as thrilling as seeing it.  Check it out.

The Screech continued to be active and vocalize even as it was getting more and more light out. 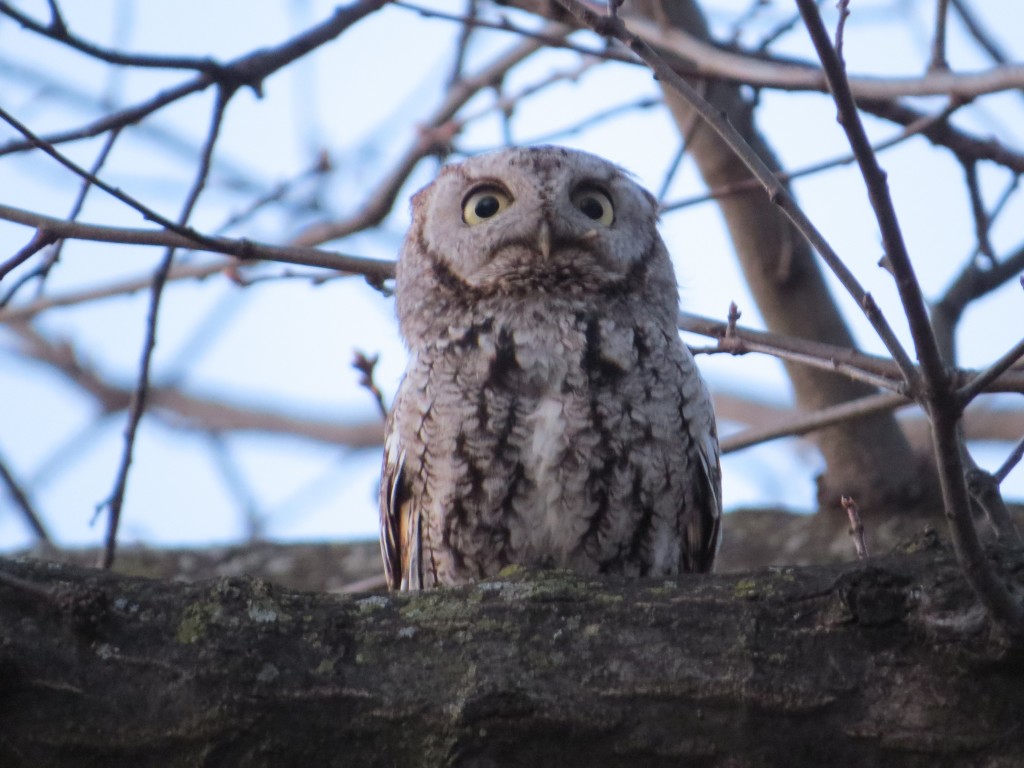 Eventually, though, it retired to one final perch and quieted down. 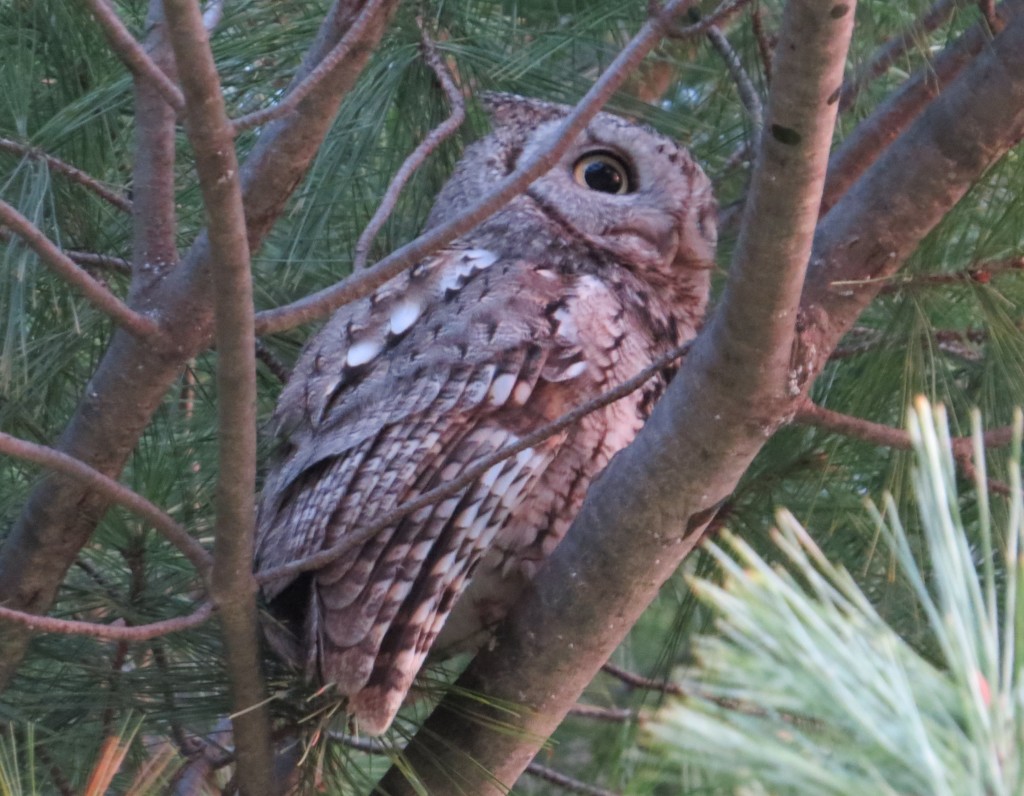 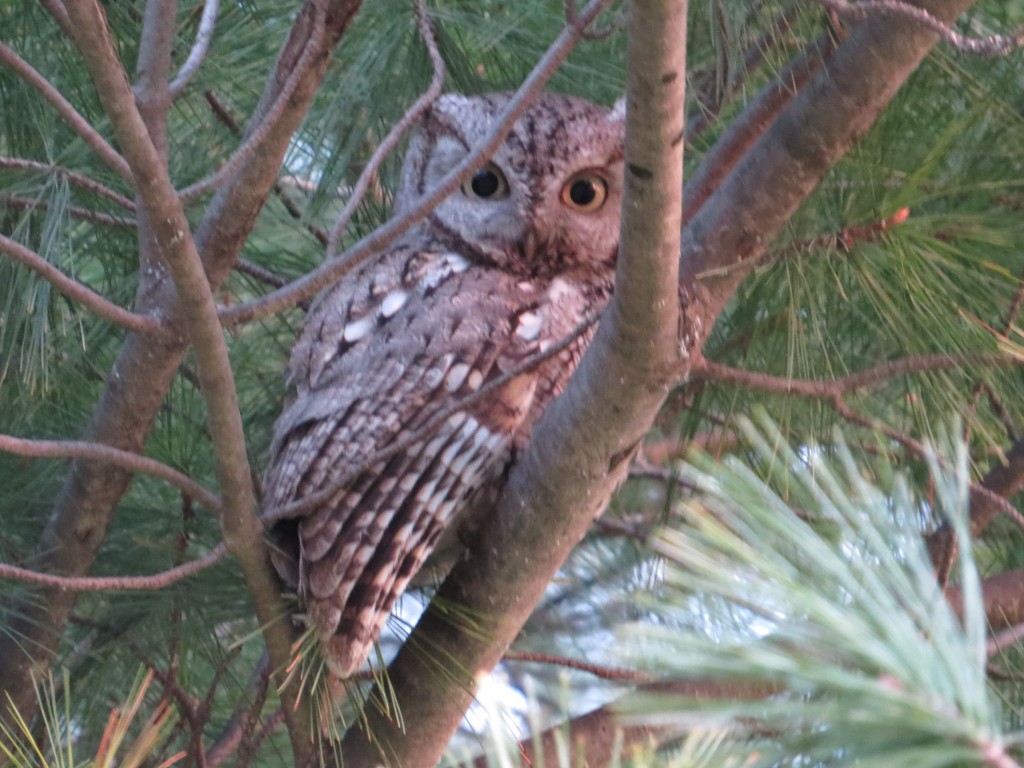 It was now to time to take celebratory photos. 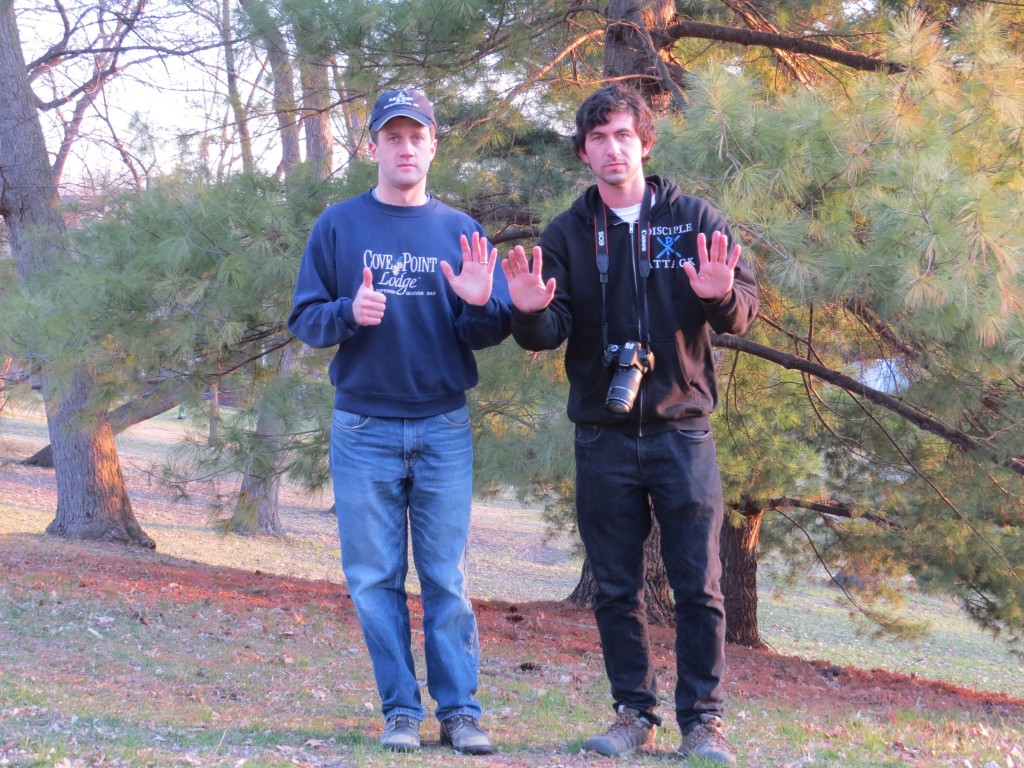 Ten Arizonan fingers for 10 Arizona TOBY Owls (so far); 6 Minnesotan fingers for 6 Minnesota TOBY Owls, subdivided into two hands–a hand of 5 fingers for 5 Tommy Owl Lifers found in MN this year and 1 thumb for a big thumbs up on what Tommy is working so hard to accomplish 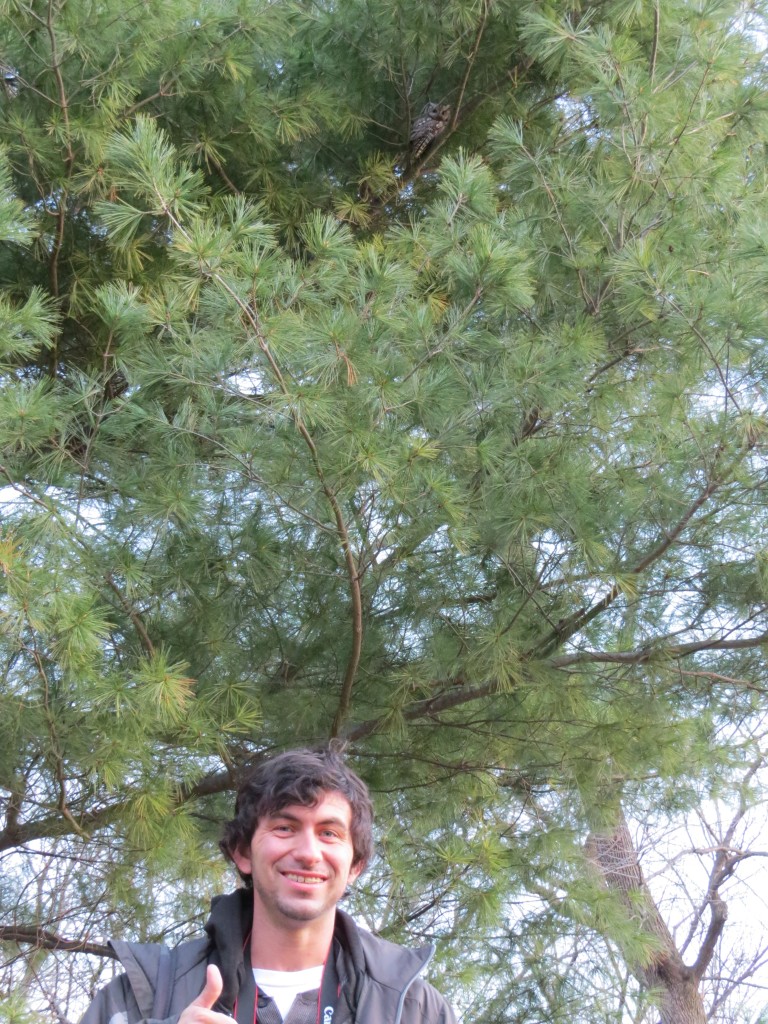 We left the Screech to enjoy the rising sun over Lake Harriet before taking his daylong nap. It had put on quite a show for Tommy and me. 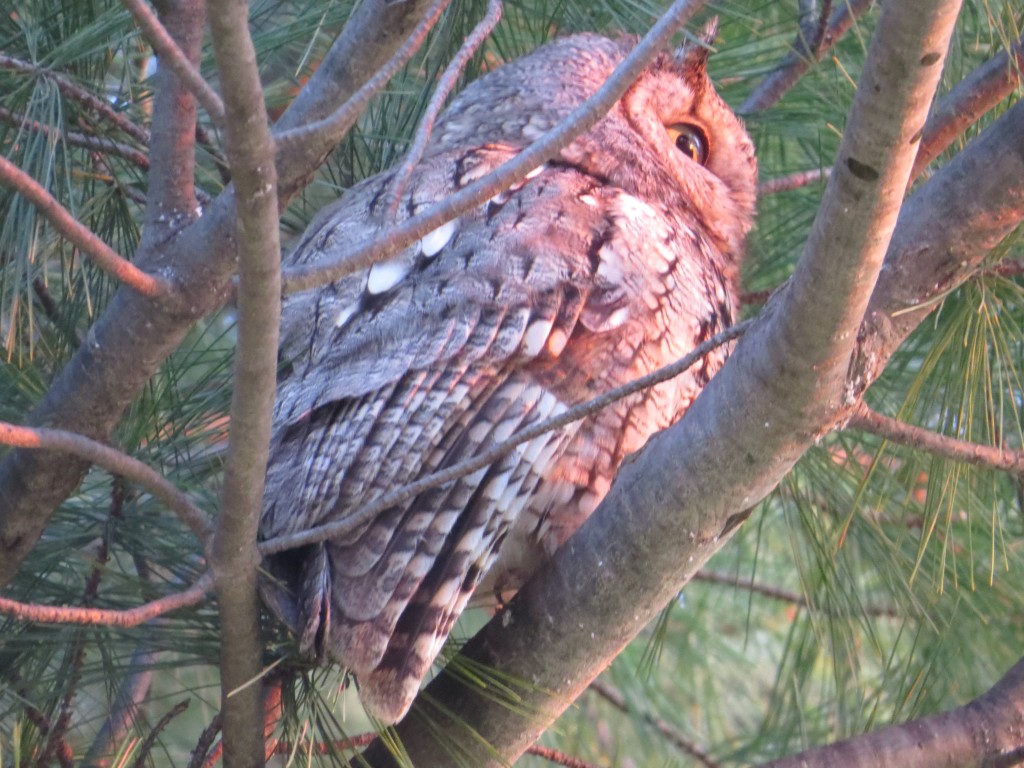 With the major trip goal of seeing an Eastern Screech-Owl all locked up by 7 AM, Tommy and I had a good 5 hours of free birding time before I had to drop him off at the airport.  I was thinking as a lister and giving Tommy options for some life birds he could get.  Tommy had his Owler hat on that day, though, and he instead opted to see Barred Owls again with this free time.  We went to Fort Snelling State Park to see the famous pair, but unfortunately they were a no-show. Fortunately, Tommy picked up his American Tree Sparrow lifer for a nice bonus on the day.

We next went to the Minnesota River National Wildlife Refuge Long Meadow Lake Unit to look for another famous pair of Barred Owls that are nesting there.  As we searched we came across many fun birds as migration is just getting underway.  My personal highlight was detecting a singing Winter Wren.  Their song is one of the best of the northwoods where it lives; I was surprised that it was singing in migration. 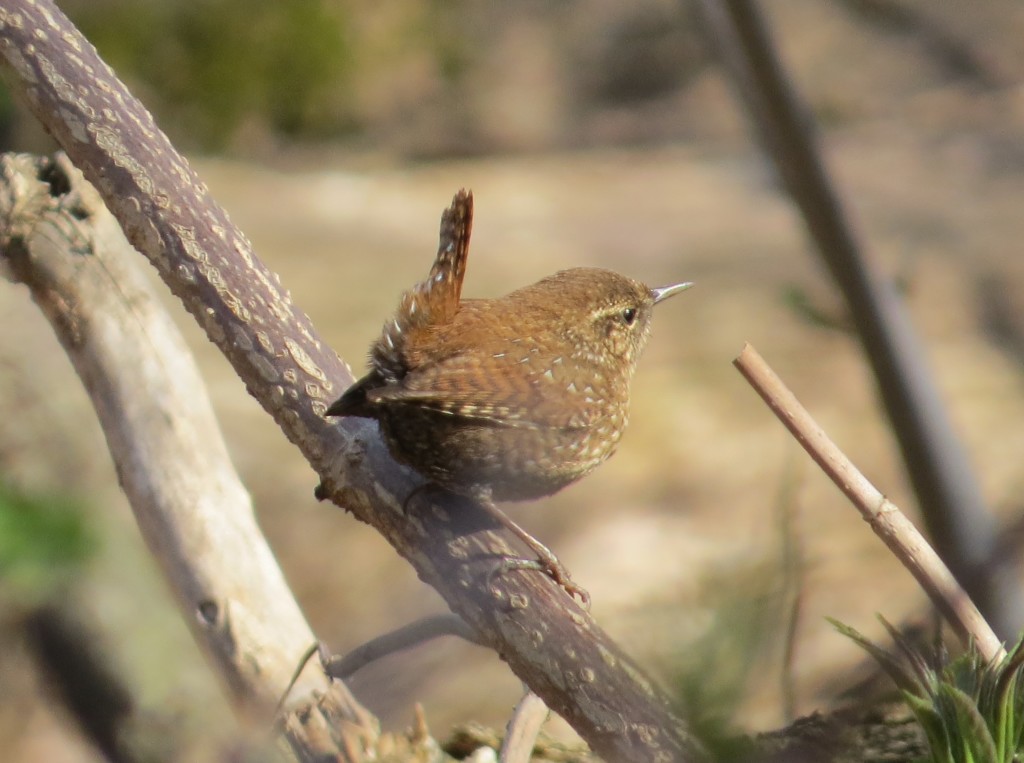 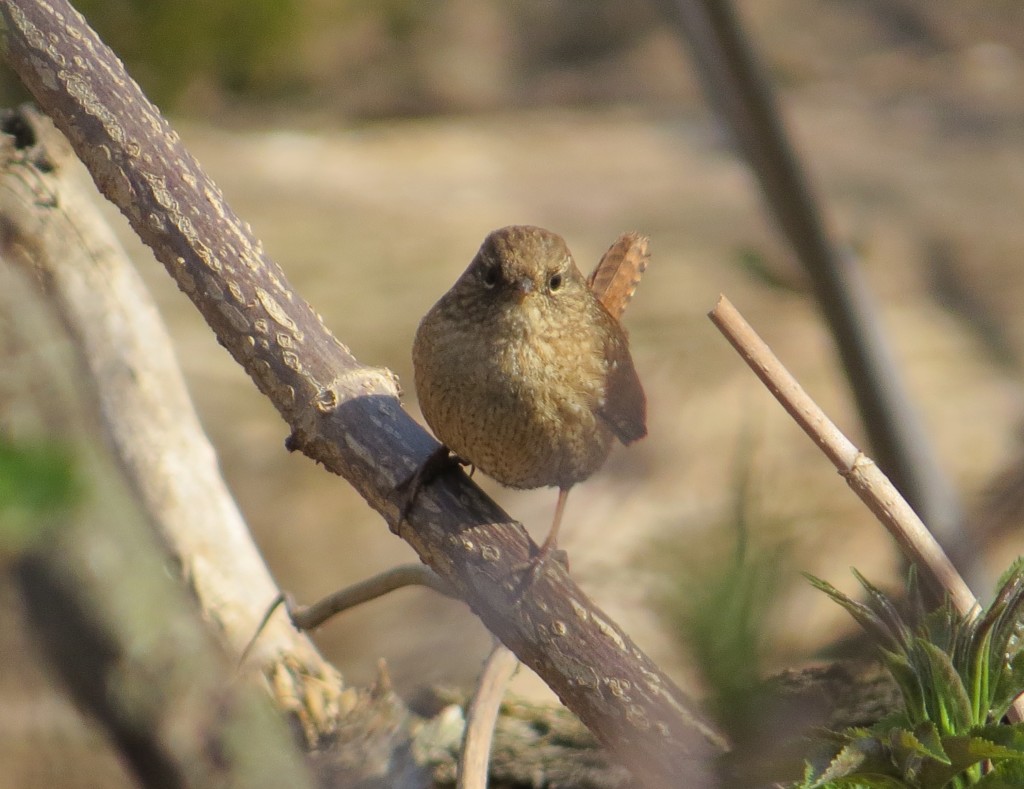 Eventually Tommy spotted what we presume to be the male of the nesting pair of Barred Owls.  I was surprised when he pointed it out to me–I really wasn’t expecting a Barred Owl in this spot.  It was a reminder to be vigilant always.  Tommy never lets his guard down. 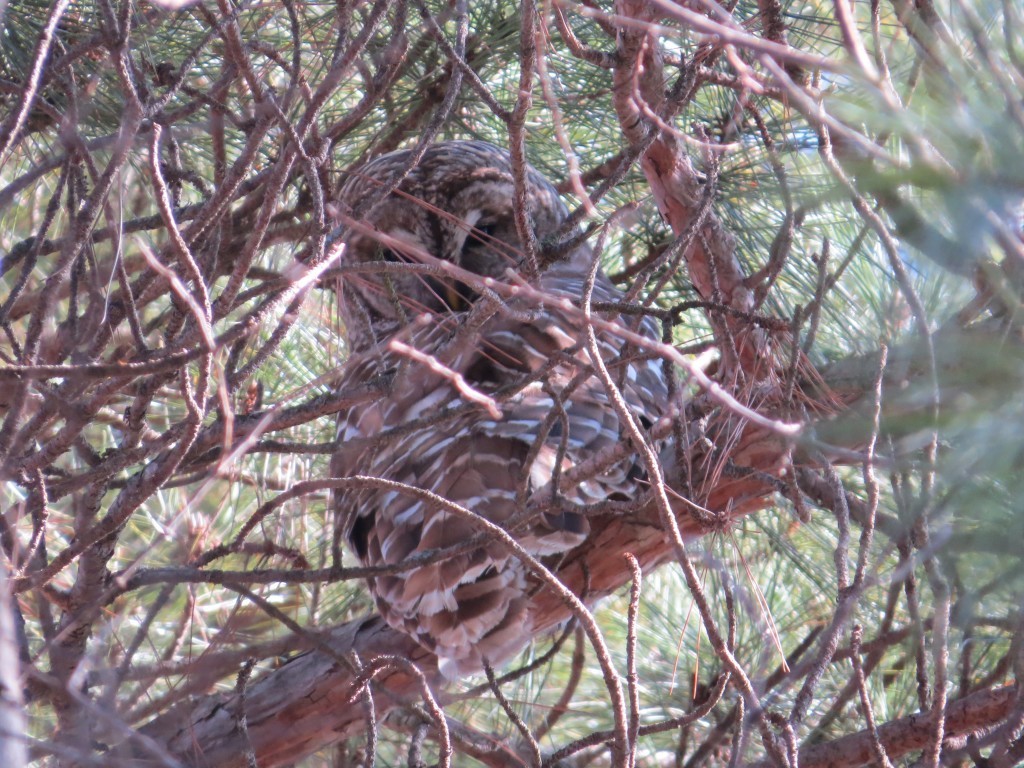 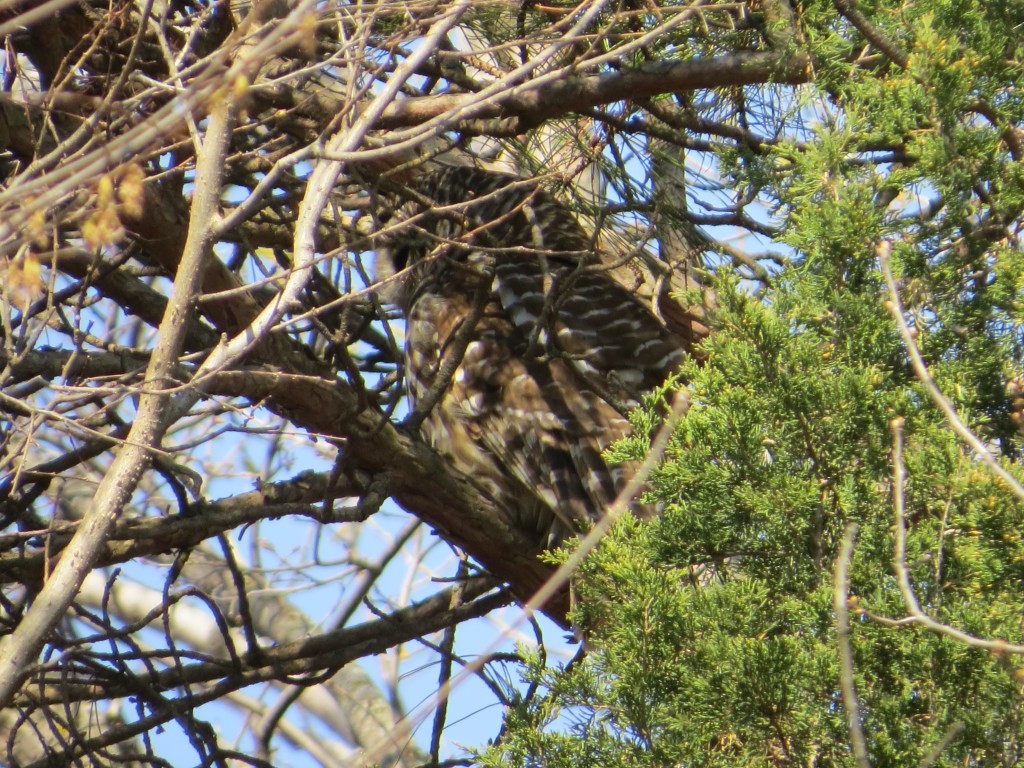 This Owl was not very photogenic and quite skittish.  After following it through the woods a couple times, we decided to leave it alone and go look for the nest.  Eventually we found it.  The Mrs. was much more photogenic. 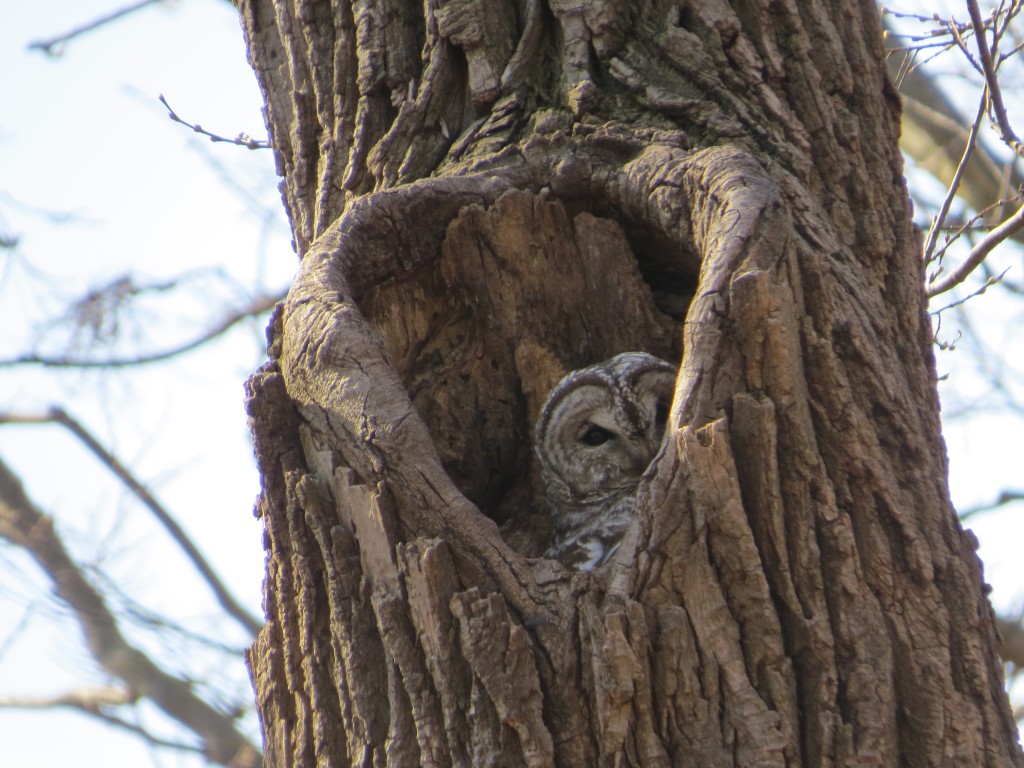 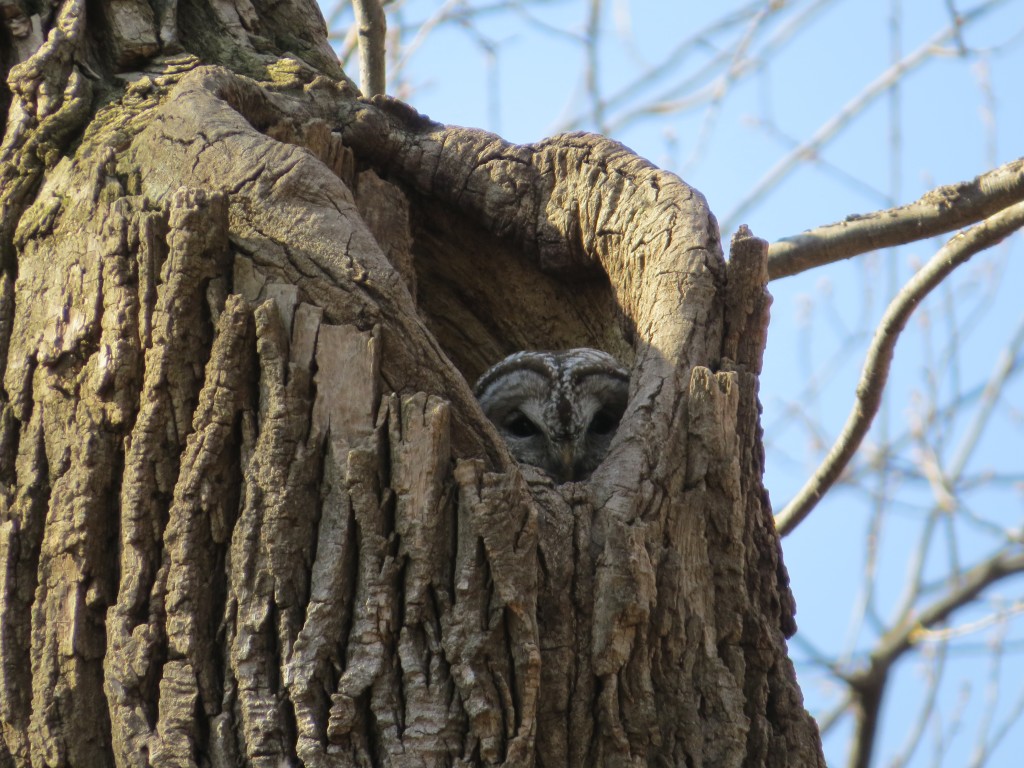 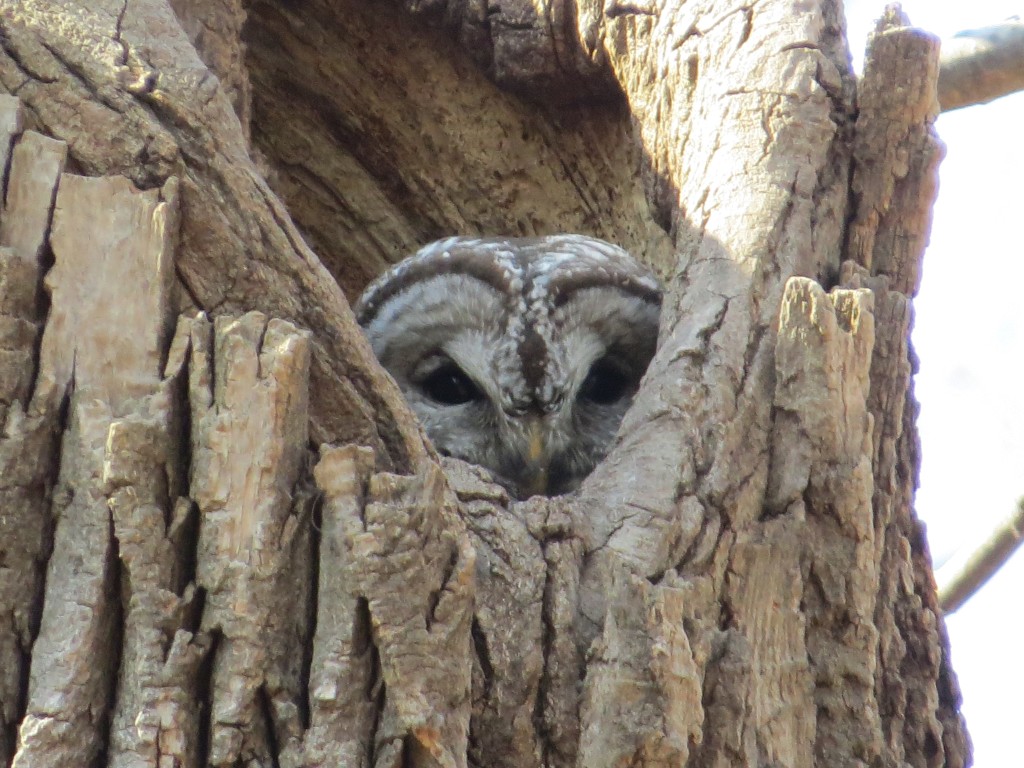 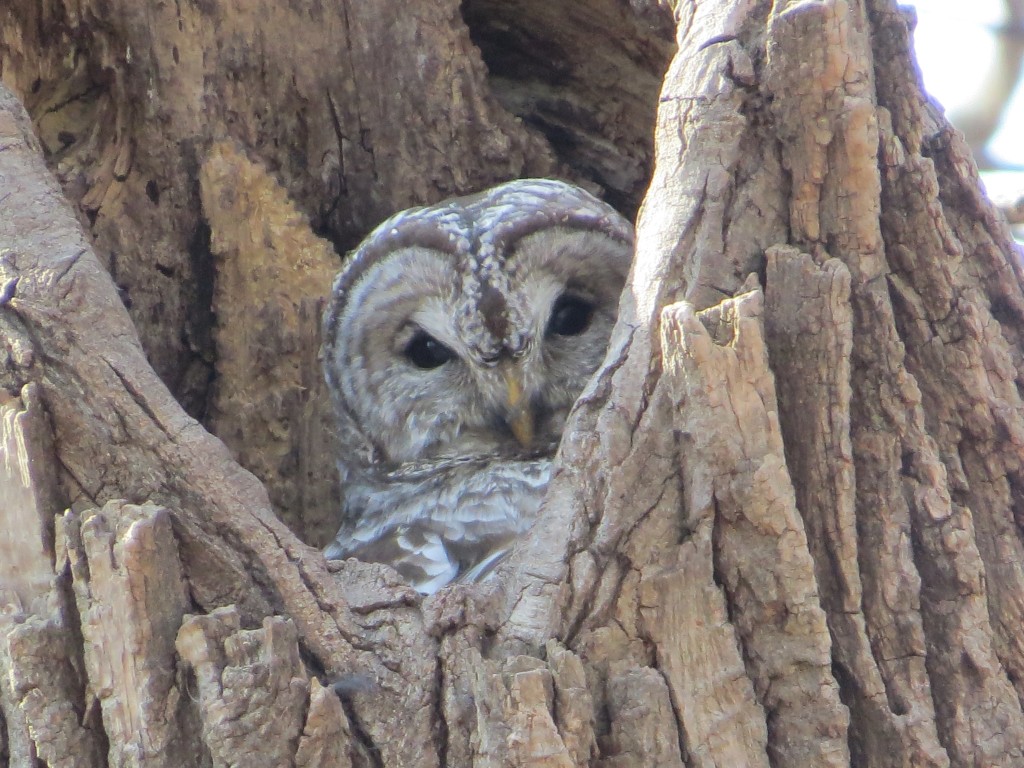 After enjoying these Owls and the other birds it was time to wrap up this flash of a visit.  Tommy and I enjoyed a hot meal of Swedish meatballs at IKEA in the shadow of the Mall of America before getting him to the airport at noon.  I told Tommy that perhaps there were some Arizonans who flew to MSP the same day as he did to do something just as frivolous–spend their time and money at that retail behemoth.  The difference, though, is that what Tommy came to get will not end up in a landfill some day.  Instead we created yet another fun memory that will always be with us.

I’ve known Tommy for just over a year now, and in that time we have gone on four major birding adventures together, each with its own major goal.  And each time we have succeeded in meeting our goal.  Here’s a quick recap:

Little did we know that the winter MN Owling trip would spark TOBY, making it a real possibility.  Tommy has just three Owls left to find for his Big Year: Flammulated, Short-eared, and Boreal.  Working on TOBY is not over for me yet, the focus is just shifting.  Tommy is counting on another trip to Minnesota as Plan A for one of these birds. Perhaps Minnesota will even have a remote, unlikely chance of being Plan C for another. Time will tell.

It was a thrill to be able to do this compact, high-adventure with Tommy.  I am looking forward to the next adventure. Congratulations, Tommy, on your new lifer Owl and getting Owl species #16 on the year!