Fresh off my birding binge with Tommy and Gordon, the Northland was once again calling me back.  No rest for the weary as they say, or more accurately, no good birds for the well-rested.  This time I was headed back to work as a field trip leader at the annual Sax-
Zim Bog Birding Festival.  It would be my second time guiding in as many weeks, only this time would be so much different.  Instead of taking out a couple of hardcore listers, I’d be with a huge group of all ability levels.  To compensate for such disproportion, there was a great number of fellow guides, most of whom were more skilled at the art of bird and people wrangling than I.  Some I knew, many I did not. The camaraderie of this team was instant, though, and brought a bit of warmth to the air that flirted with 30 below. Of course, this is bound to happen when the guides are quartered in the wood-heated Ringhofer farm house where you are instantly welcomed by the hosts with smiles, handshakes, and multiple glasses of wine. Meadowlands truly does welcome birders.  We were, in many respects, in the heart of the Bog. Stories and laughs abounded. Little sleep was had. Anticipation was high. 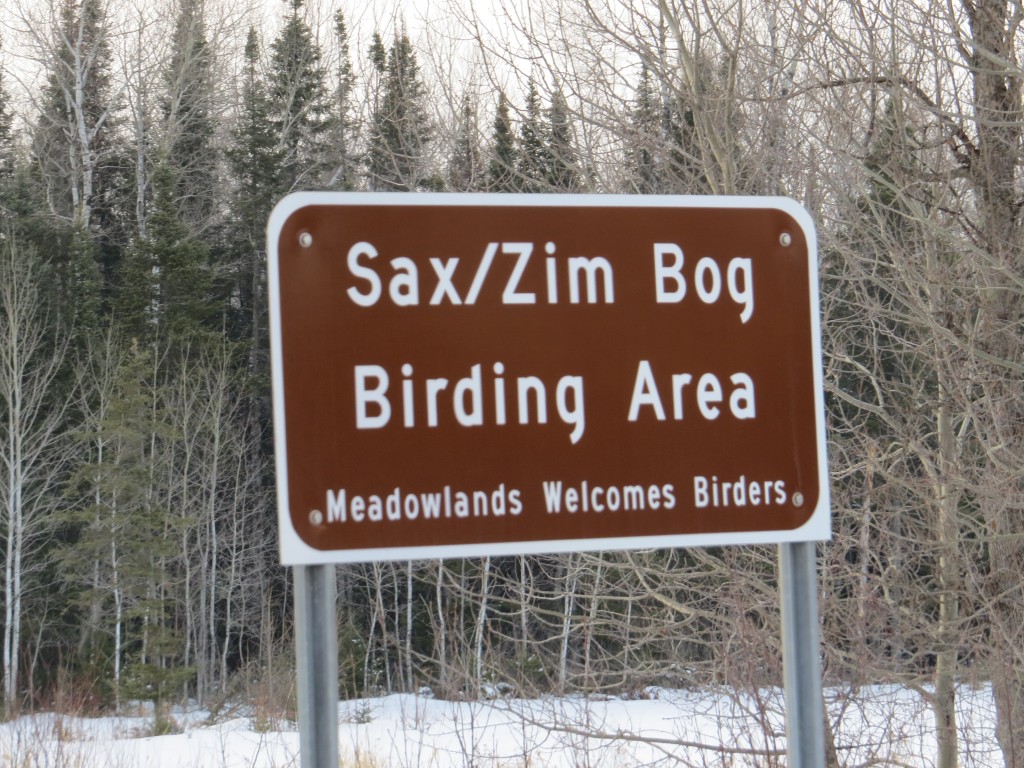 A key difference between this trip and my last was the food. Birding like madmen the last go-around did not lead to the best diet which was a strange mix of fast-food and hastily thrown-together, sometimes sketchy meals by us crazed birders who were always on the run. On the other hand, the good people of Meadowlands see to it that you eat like kings, giving us three squares a day that tasted like it was cooked with a grandma’s love.

Despite enjoying my hot breakfast that first morning, I was apprehensive about this new form of guiding. Where I once I had heated seats, defrosted glass, and vehicular independence, I now had the cold, hard bench seat of a school-bus that was slow to warm and a trademark SZ Festival ice scraper for keeping my pane clear of frozen condensation. What was the same between this trip and the last, though, were the birds and the high Great Gray hopes of those I was showing around.  Because of that I was grateful to be with experienced Festival guides, Alex Watson and Ben Harste.  Meeting Alex was a highlight for me–he was previously a mystery birder that has shown up occasionally in my home county and filed some reports that led me to my county Cerulean and Blue-winged Warblers.  Alex is not only good at finding good birds, but he was also at ease being the main tour guide on our bus.  So as Alex talked over the constant window-scraping, I was able to concentrate on trying to keep my feet warm while looking for birds and visiting with those around me.

Our first stop was the Sharp-tailed Grouse lek which did not pan out. From that point we were puttering along at 5 MPH, scraping windows and trying to spot one of several Grays known to inhabit the Bog.  Our route and plans were quickly abandoned when John Richardson on Bus #2 texted me that Frank Nicoletti had a Great Gray over ten miles to the north.  This bird is the main attraction, the kind that attracts birders to our frozen state in the winter.  Needless to say, we informed our group and told Amy, our bus driver, to kick it into high gear.  The nerves of the group were palpable.

As we were nearing the location, though still a bit out, fellow guide Ben Harste hollered “Stop!” from the back of the bus. I don’t know how he did it, but through the frosted, fogged up windows from the BACK of the bus, he spotted a Great Gray Owl DEEP (100 yds) in the Aspen stand of all forests and became a hero to a busload of overly excited birders, myself included.  The bus was nearly on two wheels as everyone piled on one side to get a peek.  Once they got their life look, I slipped out to get a scope set up so people could get a real good look. 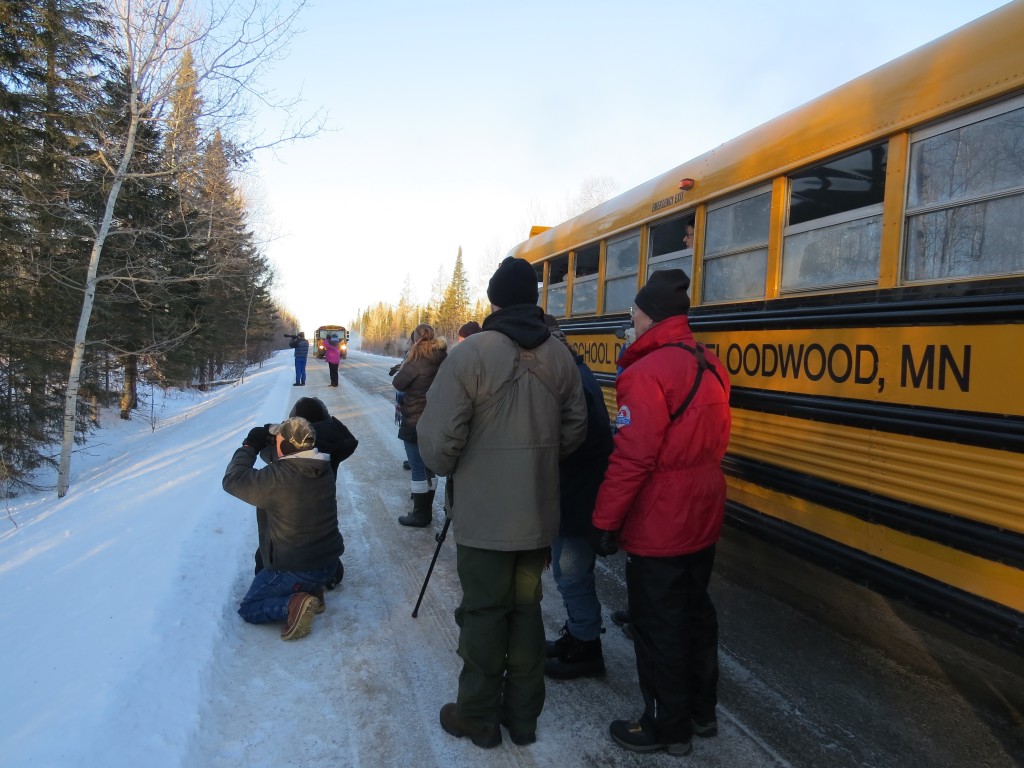 Fumbling with the scope barehanded in 30 below caused me to climb back on the bus immediately after setting up the apparatus, but eventually I did get back out for a couple quick photos myself. 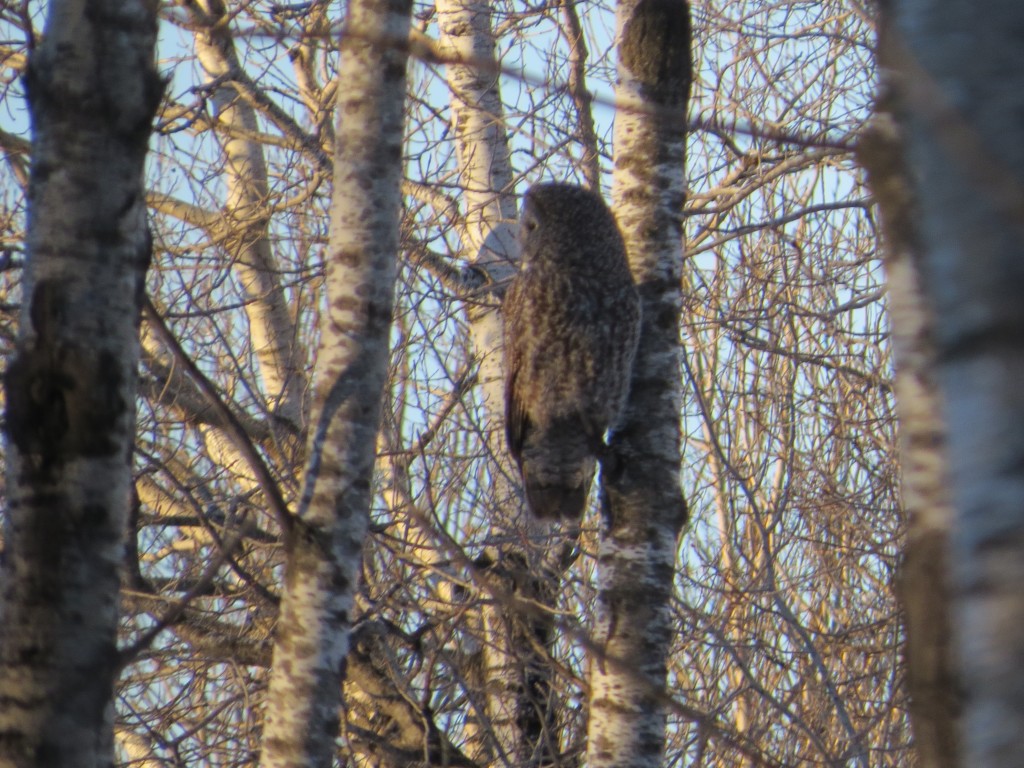 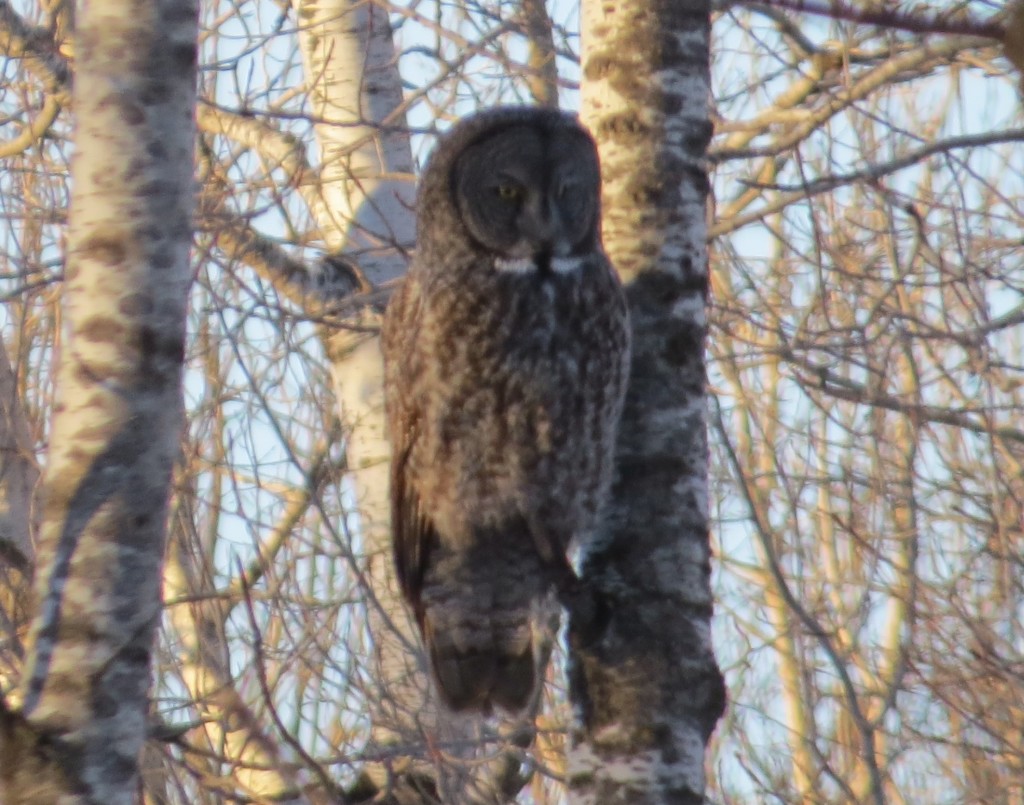 As we were watching this bird, it dawned on me that we hadn’t yet reached the bird Frank reported, which meant there was a second one! We loaded everybody on our bus back up and continued on down the road.  Minutes later one of our group members spotted the second Great Gray, only it was far more skittish and dove for the cover of the bog even before the bus could stop. Oh well, we got a good fix with the first one and it was bathroom break time at the McDavitt Fire Hall anyway.  Breaking gave us a chance to mingle more with the festival-goers.  I visited with a man who looked like he was dressed for a chilly October day in Minnesota, much less for sub-zero.  Sadly this made sense when I saw on his name tag that he was from Florida. But if he was cold, he wasn’t letting on.  I think the birding adrenaline was pumping hard in this one. Whenever we asked the group about wanting to see this bird or that bird, Mr. Florida would instantly pipe up to let us know those birds would be lifers.

So after the break, it was time to hit the Bog hard looking for lifers for Mr. Florida et al. One of those was the Admiral Road staple, Boreal Chickadee. 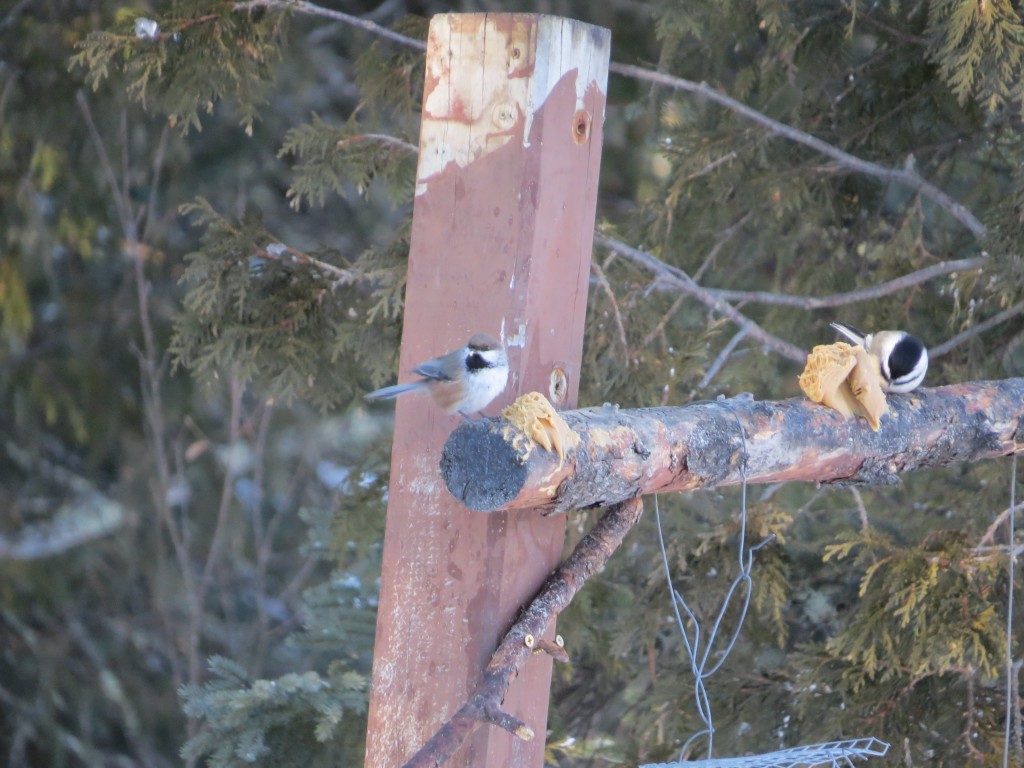 I know I’ve posted photos of this bird already this year, but just like the Chickadee himself cursed with his own addictions, I just can’t stop… 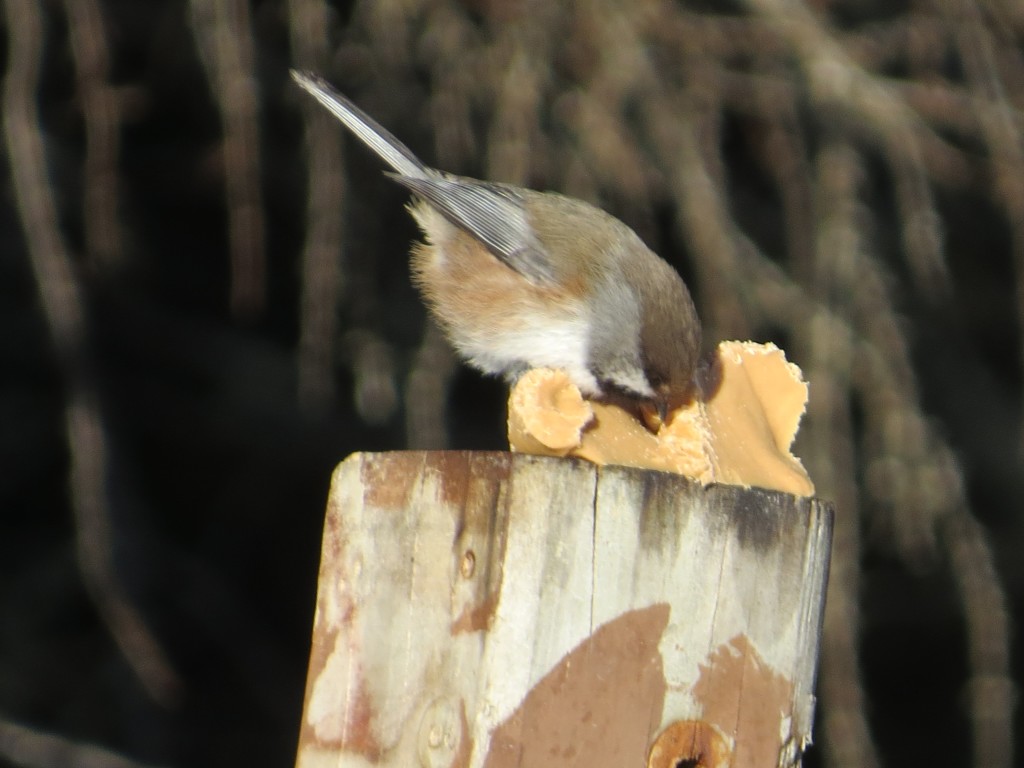 Another crowd favorite were both species of Grosbeaks, though on this day I only photographed the “yellow ones” as locals sometimes call them. 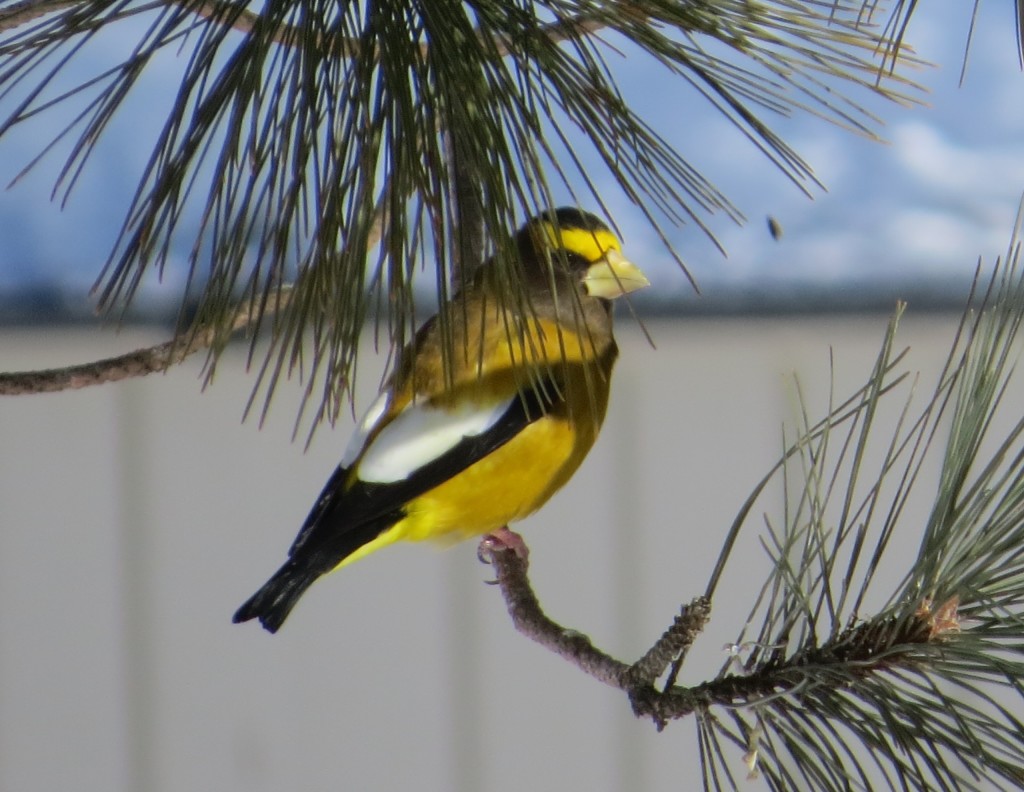 I checked in with Mr. Florida a couple times throughout the day to see what his lifer tally was. Besides the Great Gray, both Grosbeaks, and the Chickadee, he also picked up Northern Shrike, Common Redpoll, and a surprisingly hard-to-find Gray Jay.  Despite missing on Ruffed and Sharp-tailed Grouse, Mr. Florida had the highest lifer total for our group. He was happy, especially because he told me he was not expecting the Great Gray.

In addition to the bird lifers, we got the folks their porcupine lifer.  People go crazy over porcupines when they visit, an infatuation I don’t understand. 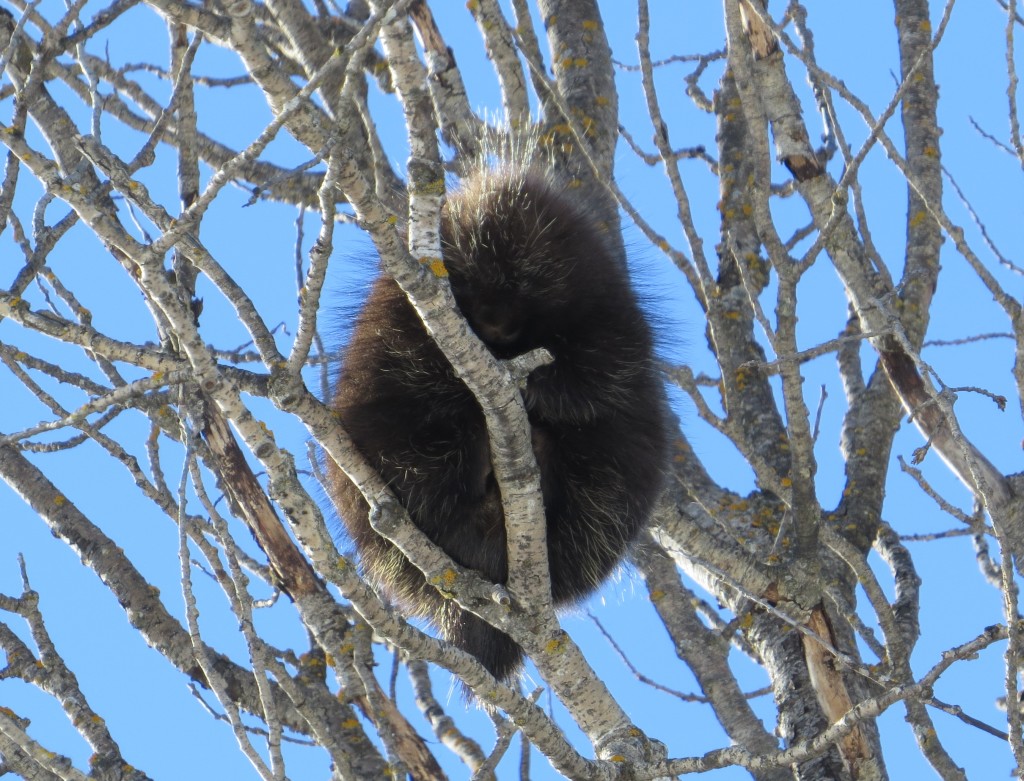 After birding for some time, our day was truncated late afternoon and did not allow for more Owl searching during prime evening hours as we had to get back to Meadowlands for the dinner and program by Canadian Great Gray Owl researcher, Dr. James Duncan. Listening to an authority on Great Gray Owls give a captivating presentation in a Canadian accent is like a giant exclamation point on a day in which many got their coveted lifer.

The second day of the Festival I was scheduled to be a guide on a far-flung field trip to Lake County.  The birds would be few even if we found them, but mighty birds they would be.  We were targeting Spruce Grouse, Black-backed Woodpeckers, and Bohemian Waxwings.  There was, of course, the potential for more Great Grays and Boreal Chickadees.  More impressive, though, was the fact that the Lake County team the previous day found the very-rare-for-Minnesota American Three-toed Woodpecker!  I was beyond stoked to go along on this trip with that news.

Even better than a Three-toed was that we were riding a cushy, warm coach bus for the long haul east and north. That was, unfortunately, about the most exciting the day would get as we failed to turn up any of those boreal greats. We would be going through several towns on the way home in the hopes of finding nomadic Bohemians feasting on decorative fruit trees in residential neighborhoods. When we were in Ely we stopped to look at some Pine Grosbeaks in a crabapple tree. 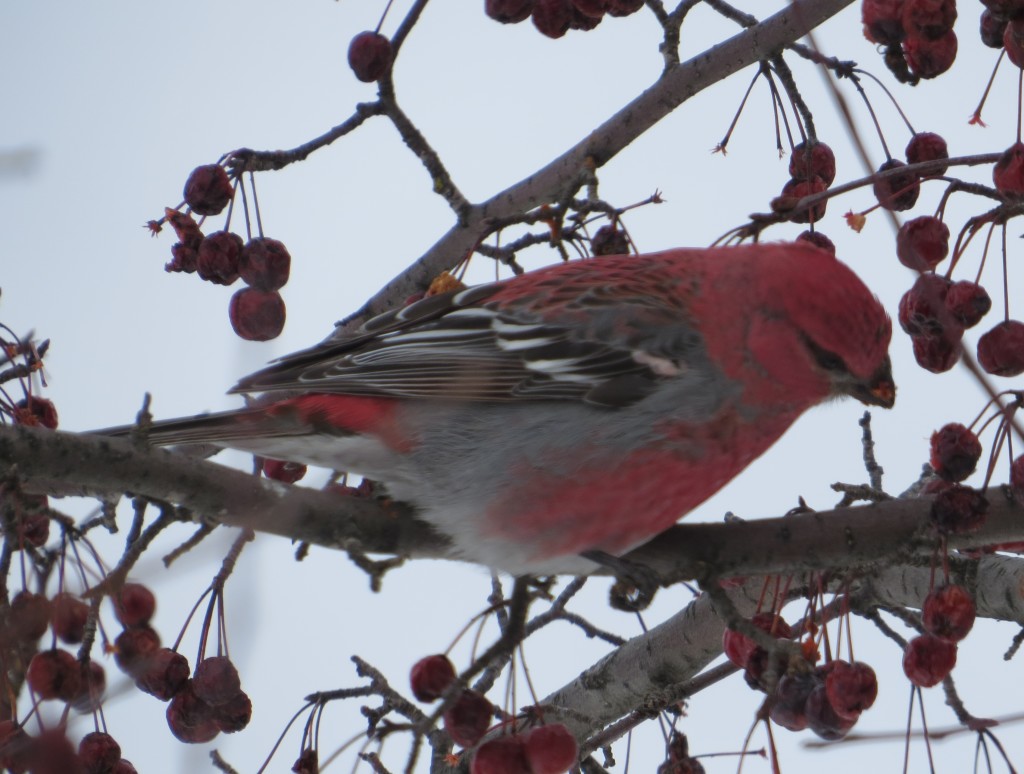 Then, as I watched the birds point-blank out those coach windows, I noticed one of them wasn’t very Grosbeak-like and was in fact the sought-after Bohemian! A bizarre, lone Bohemian! I alerted the group and finally felt like I earned some of my pay. It was an overdue sighting on a very slow field trip.  Georgia woman was very happy and by extension so was Georgia man.  We did later see a fly-by flock of about 30 Bohemians, but this was the only individual our group could photograph. 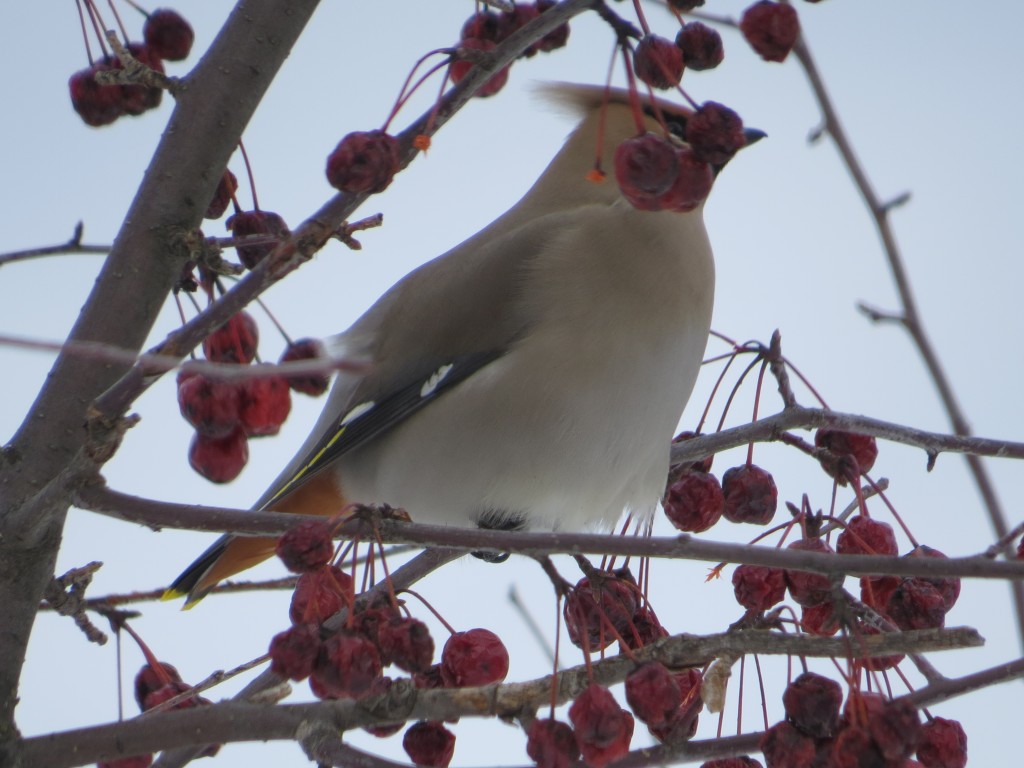 These were photo upgrades for me, though much work still needs to be done with this species.  Considering I was sandwiched between a bus and a snowbank, I’ll take them though. 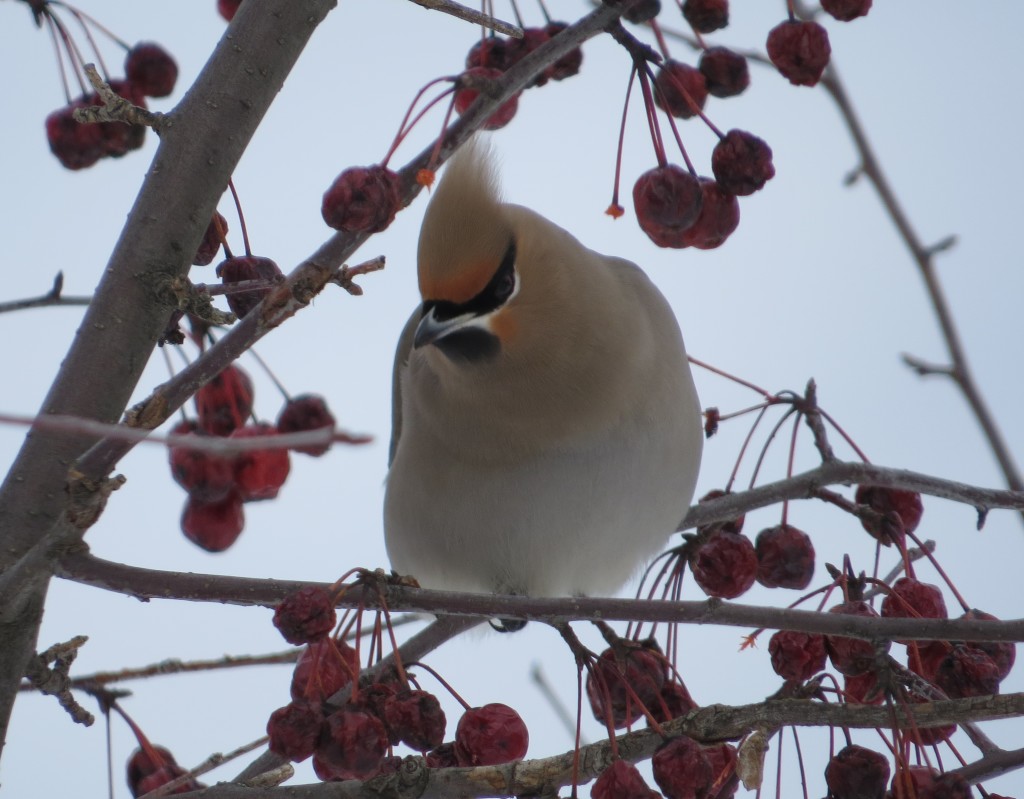 One of our other stops for this field trip was the Blue Heron B&B near Ely where we would eat our sack lunch and have coffee and cookies while watching their bird feeders. I was not excited to watch Redpolls, Chickadees, etc.  I was excited about my sandwich–so much so that I could have choked on it when someone shouted, “Boreal Chickadee!” This brought feeder-watching to a whole new level. I was not expecting this. 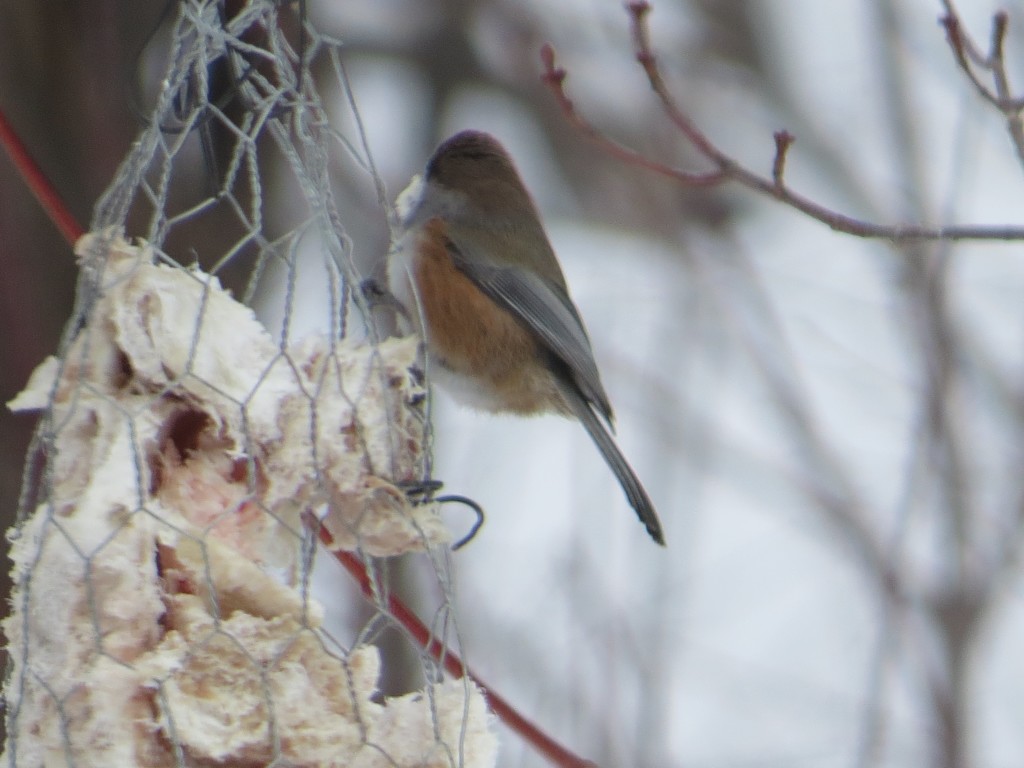 Then again, maybe I should have considering the address. 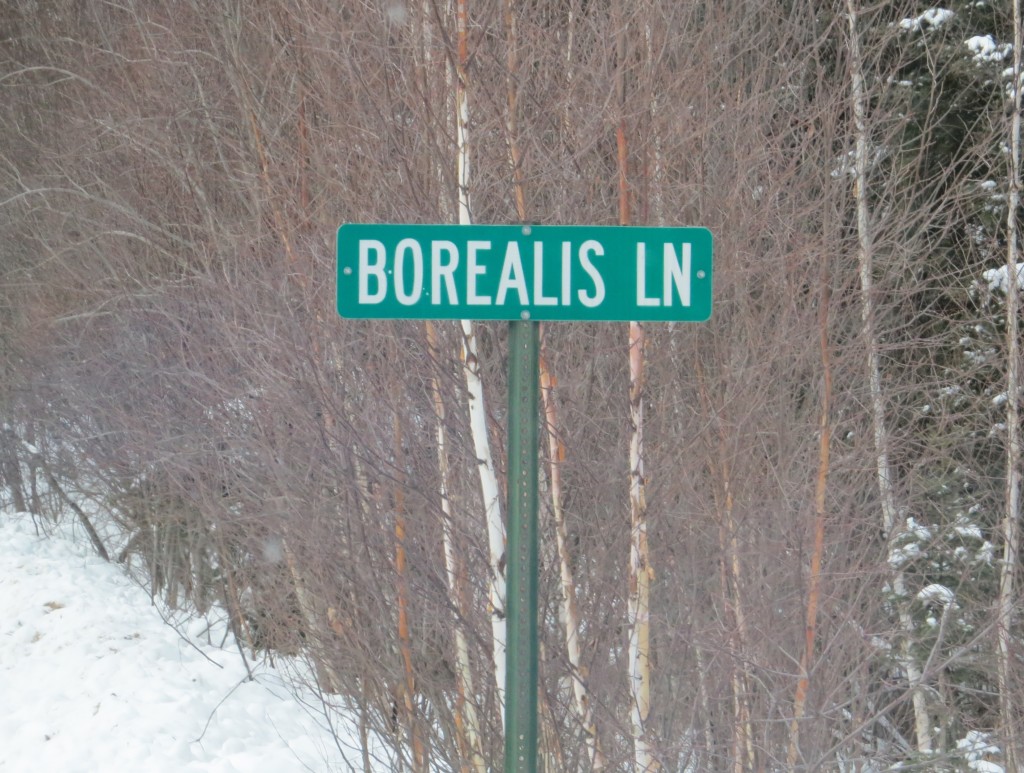 Our group continued on from the B&B searching towns on the way back for the ever elusive Bohemians. A Snowshoe Hare, thought he was elusive and brought some excitement to the group when the birds were lacking. 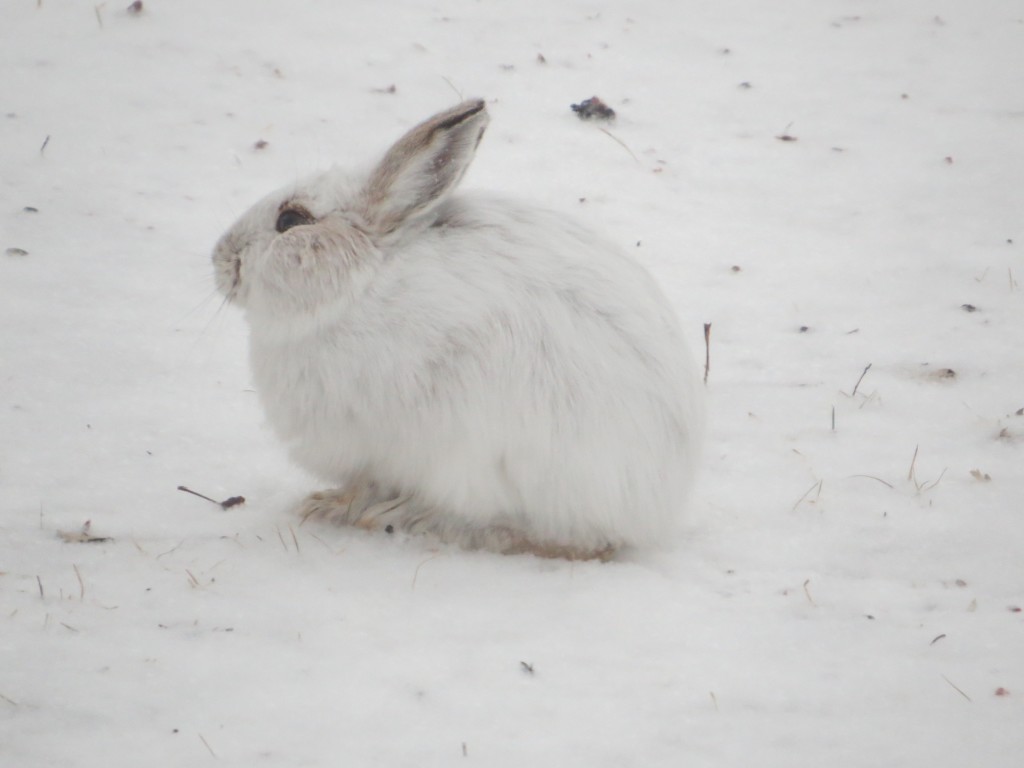 With one major bird lifer and one mammal lifer for the group, it was a long, sleepy day.  We did have a slight pick-me-up when we were coming back into the Sax-Zim Bog and spotted a very out-of-season Common Grackle.   But still, it’s a Grackle and doesn’t come close to filling the Sprucie void.  There’s always next year.  After all, it gives the festival-goers and guides a reason to return. As if they need another reason… 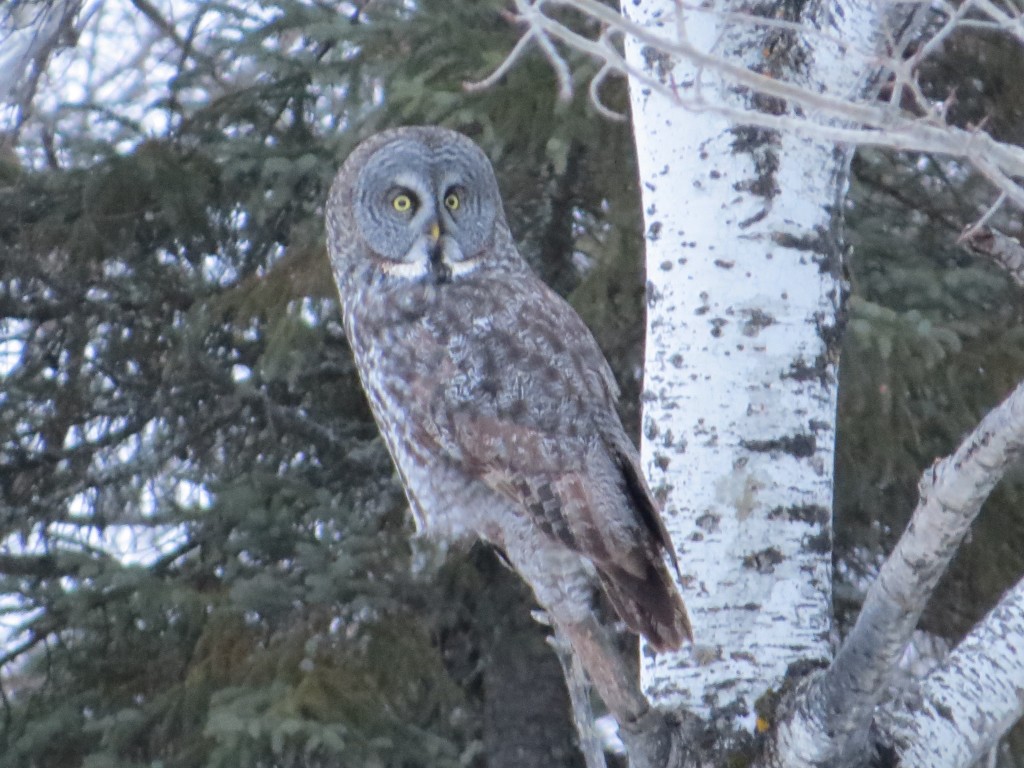