It’s a busy time of year right now with all the decorating, gift-buying, and holiday food prep–it’s a good thing my wife’s got all that covered so I can finally bring you some AZ stories.  Actually, writing the annual Christmas letter is about my only task this time of year, and much to my wife’s chagrin, this remains a grossly unfinished task.  Please don’t tell my wife I’m blogging right now.

So where were we with AZ? Oh yes, our family had departed Green Valley after a two-day stay and were about to go on a loop tour around the Santa Ritas, heading down to Nogales and back up through Patagonia and Sonoita.  There were only a couple birds on the agenda for the day.  The first (and also most exciting prospect) was checking on a Barn Owl day roost–somewhere in southern Arizona. 🙂  For some reason, Evan has latched on to this species and was one he really wanted to see.  He’ll refer to it by its scientific name, Tyto alba, and he’s been known to play its blood-curdling scream on his iPod in our house.

Once we got to the Owl’s roost, I walked up to this tower of sorts and looked up into the rafters.  Immediately I locked eyes with my Barn Owl lifer, tucked way up in the shadows! Just as I started to point it out to Evan and my dad, the Barn Owl flushed out of the opening right toward us! Of course I wasn’t ready with the camera, but our looks at this Owl were hard to beat.  Evan, bug-eyed, said in an astonished voice, “Whoa, Tyto alba just flew right by me!”

With no photo, the sighting was bittersweet for me.  But a Barn Owl seen is way better than no Barn Owl, so off to Patagonia we went.  In this city (and southern AZ in general), birders are the norm and not the nerd-freaks that people think of us in other places: 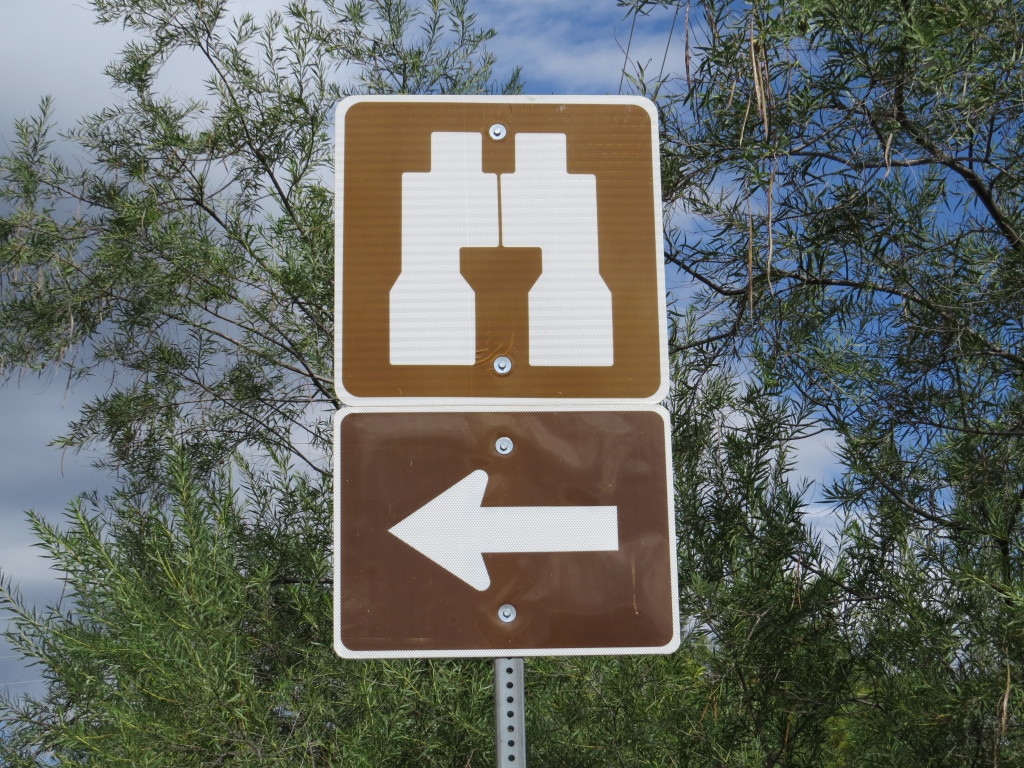 Patagonia is hallowed birding ground where all kinds of birding myths and legends originate.  In fact, a famous birding phenomenon known as the Patagonia Picnic Table Effect was coined from something remarkable that happened here that has also played out numerous times in many other locations.  Here’s the PPTE in a nutshell: some birders in the 1970s stopping for lunch in Patagonia discovered a rare bird which brought in more birders who discovered more rare birds in that location.  Whenever I find a rarity, I always hope it’s the beginning of the Patagonia Picnic Table Effect.  Needless to say, Patagonia is a place I have longed to visit after reading about it in books. 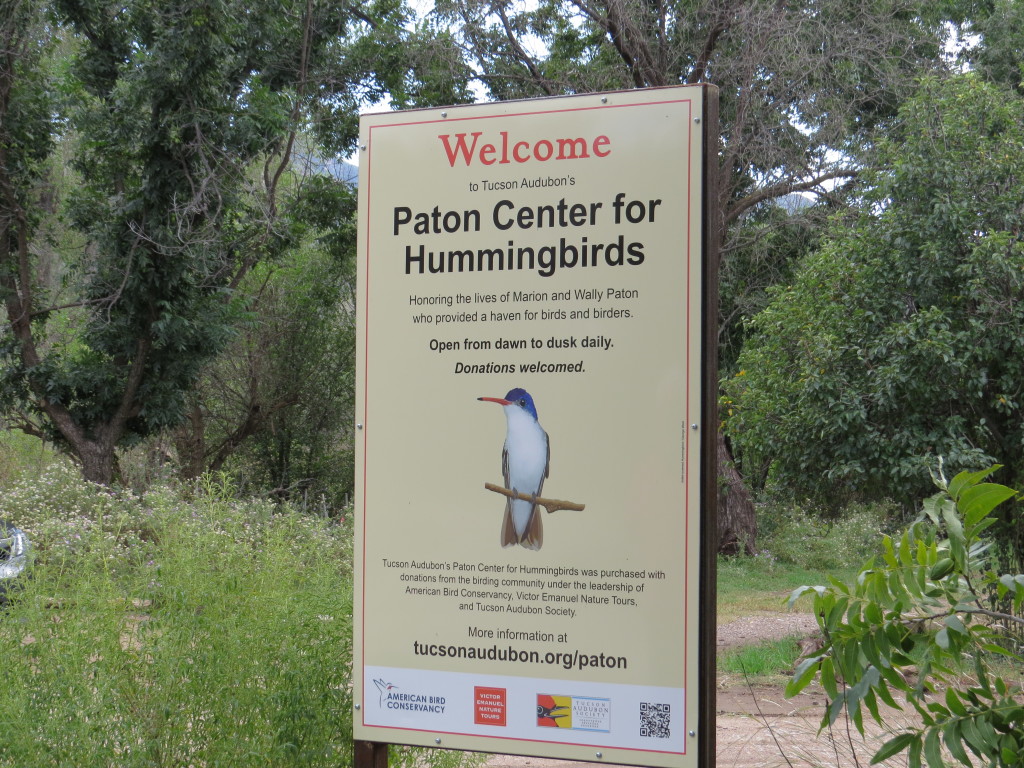 The famous Paton House–hard to believe I was actually here. 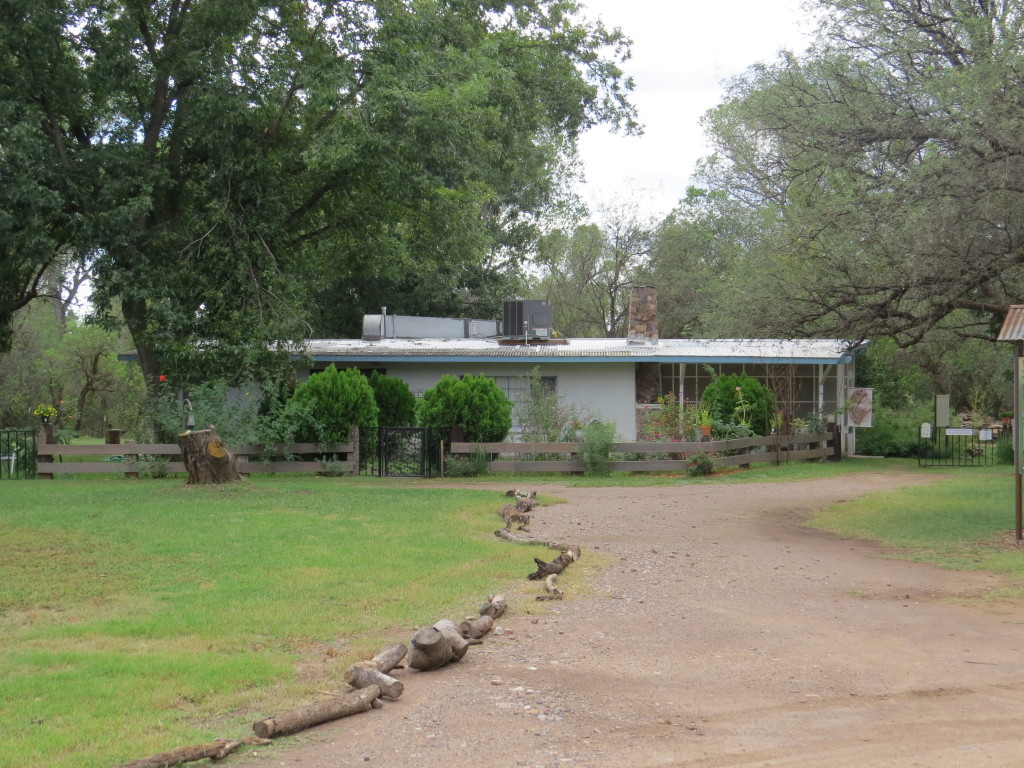 No, we didn’t come for the common White-winged Doves, though they were dapper and only the second time we’d seen one. 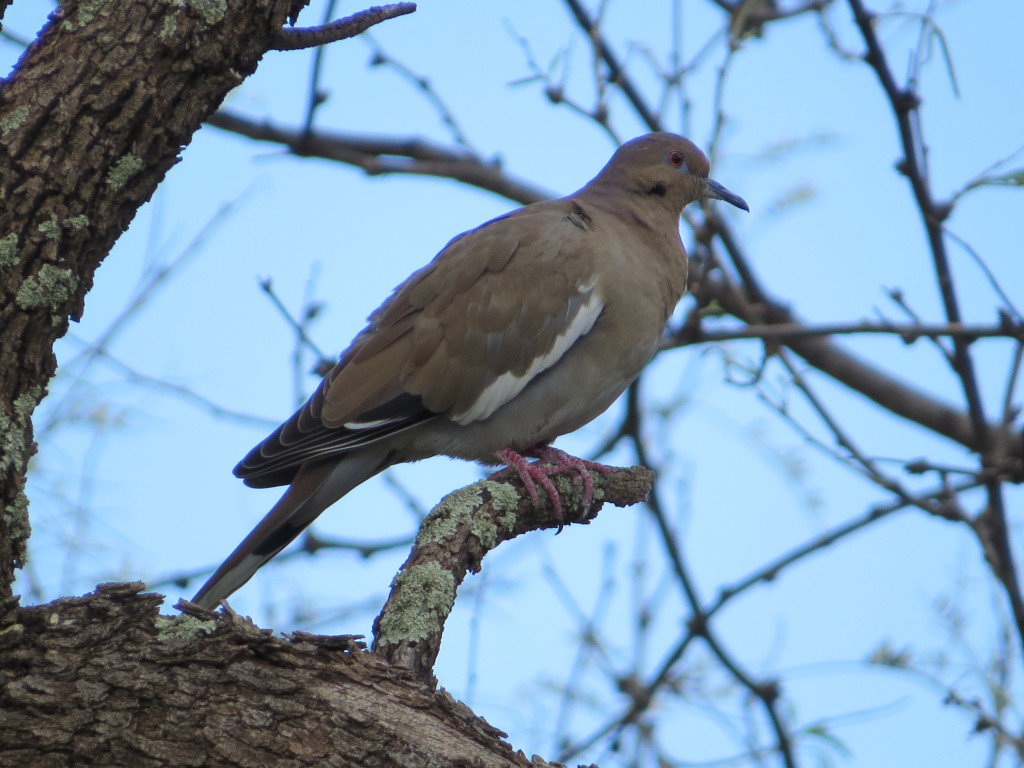 Nor did we come for the WWDO’s cousin, the much less abiding Inca Dove. 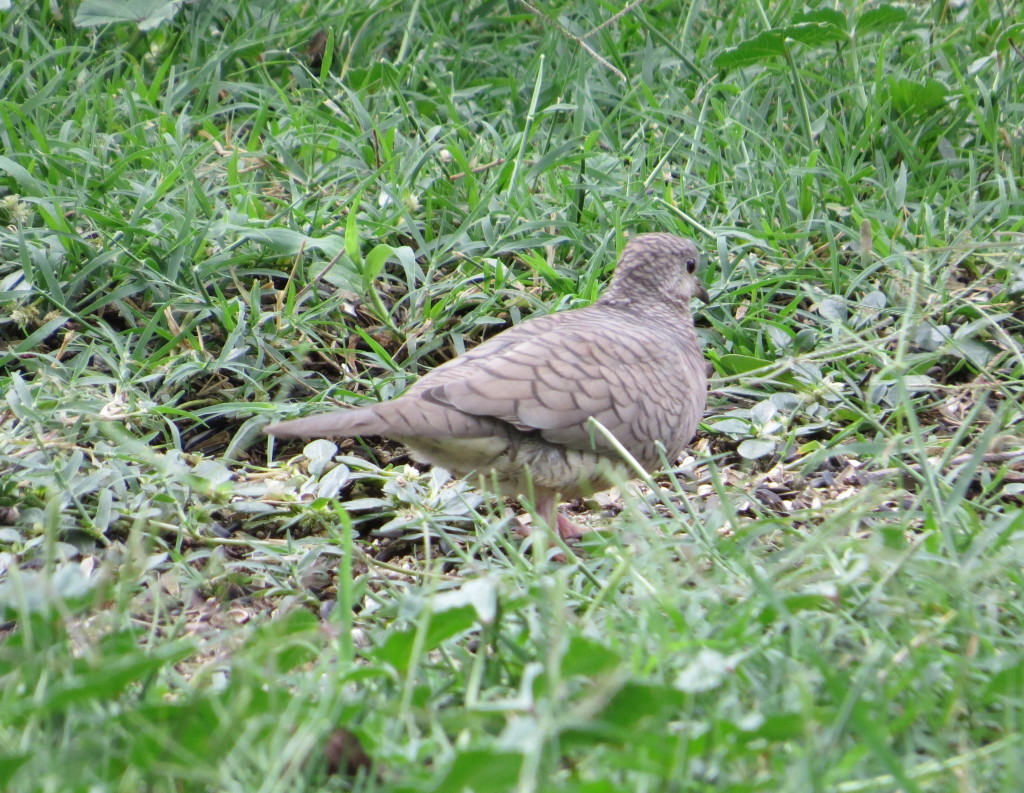 It was nice to see a Black-headed Grosbeak even if it was a bit scruffy looking, but that’s still not why we came. 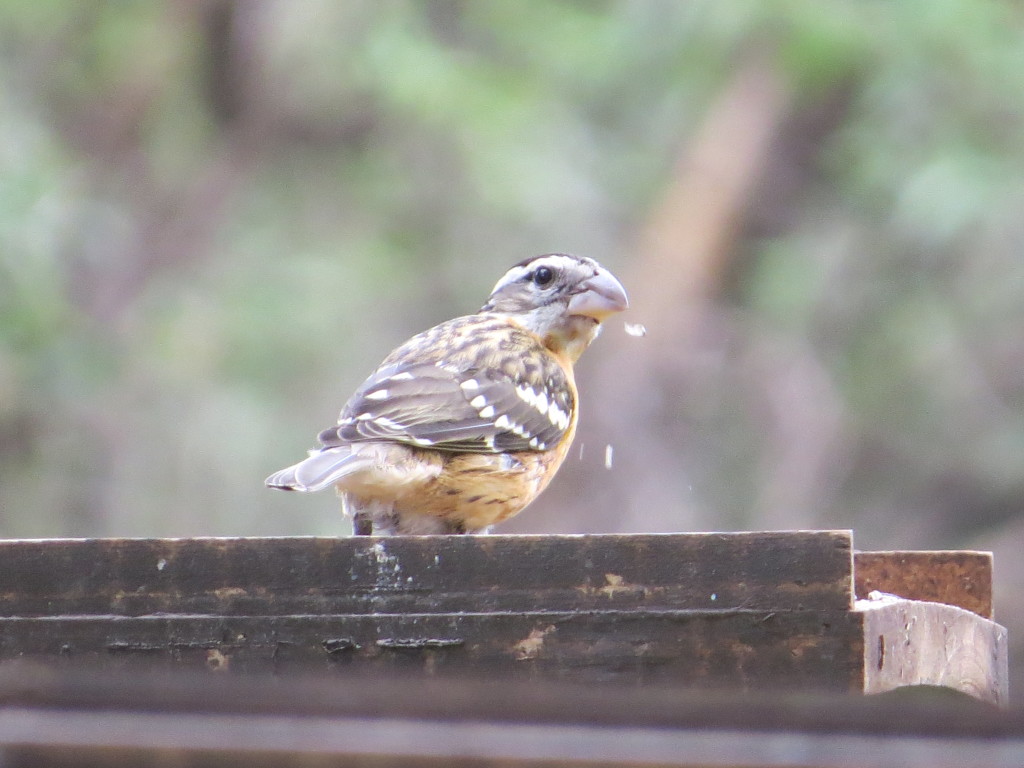 I very much enjoyed up-close looks at my first MALE Gila Woodpecker–still not why we came though. 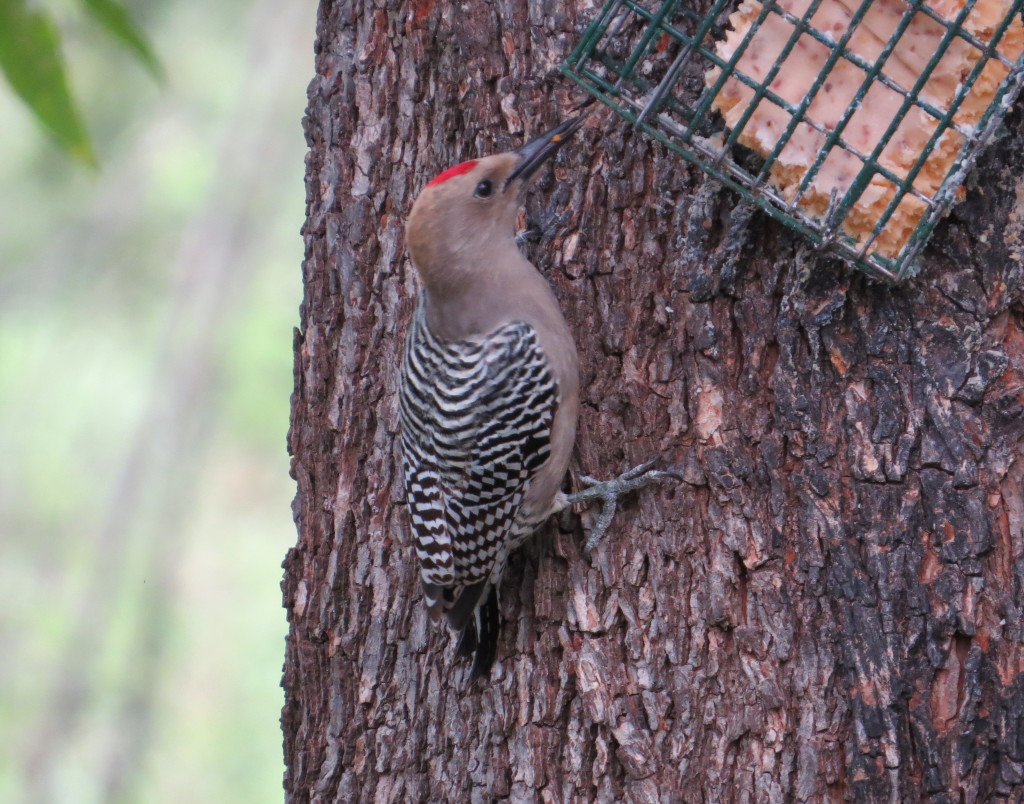 We came for the Hummingbirds.  But not for the Broad-billed. 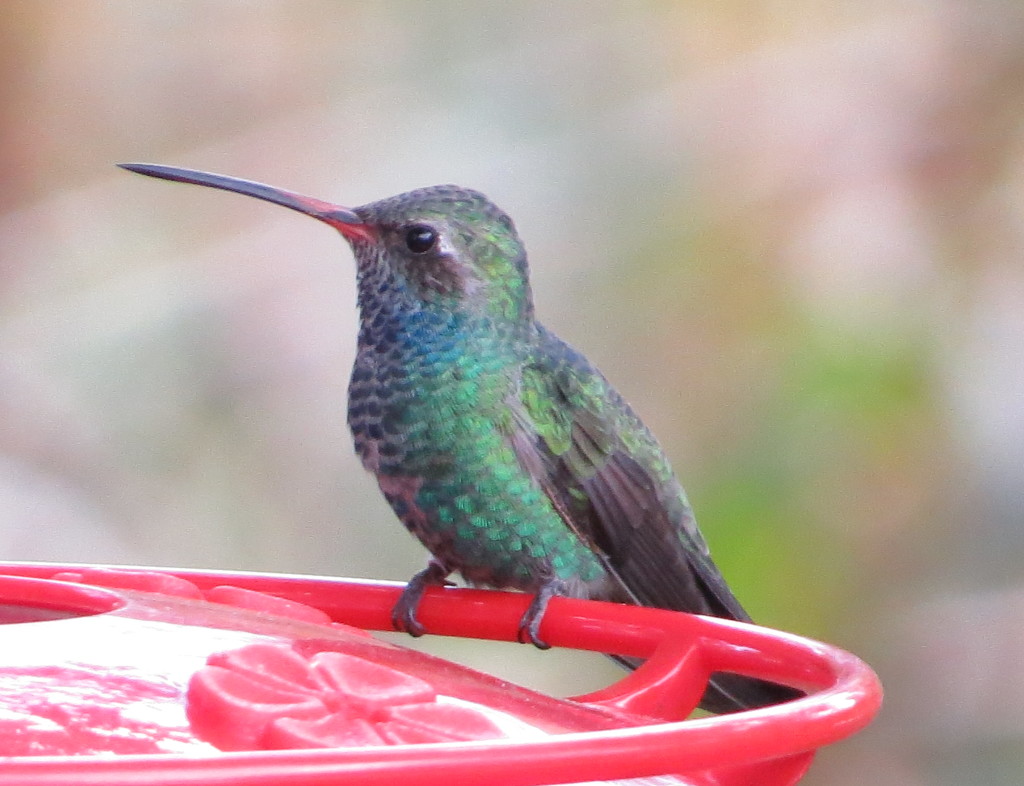 Sorry, this teasing is annoying, especially since you knew from the first photo that the main attraction is the Violet-crowned Hummingbird.  Like so many birders before us, we made our pilgrimage to Patons’ just to add this key lifer.  Good thing we saw one. 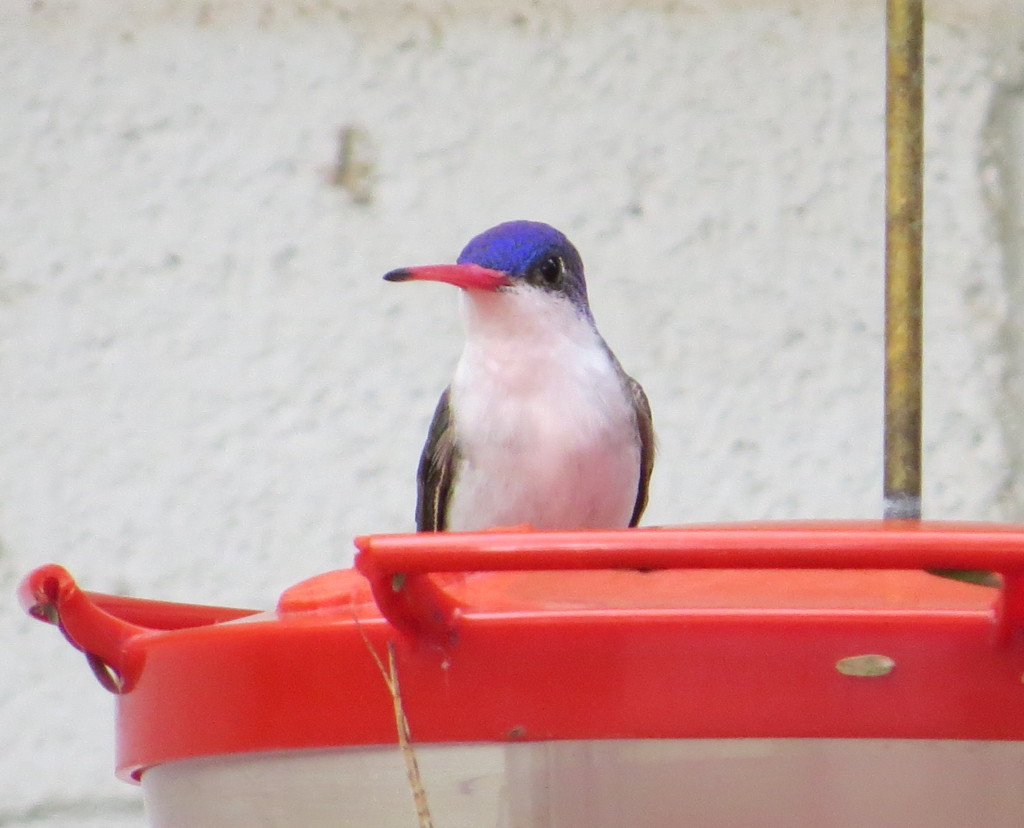 Ain’t it a beaut? 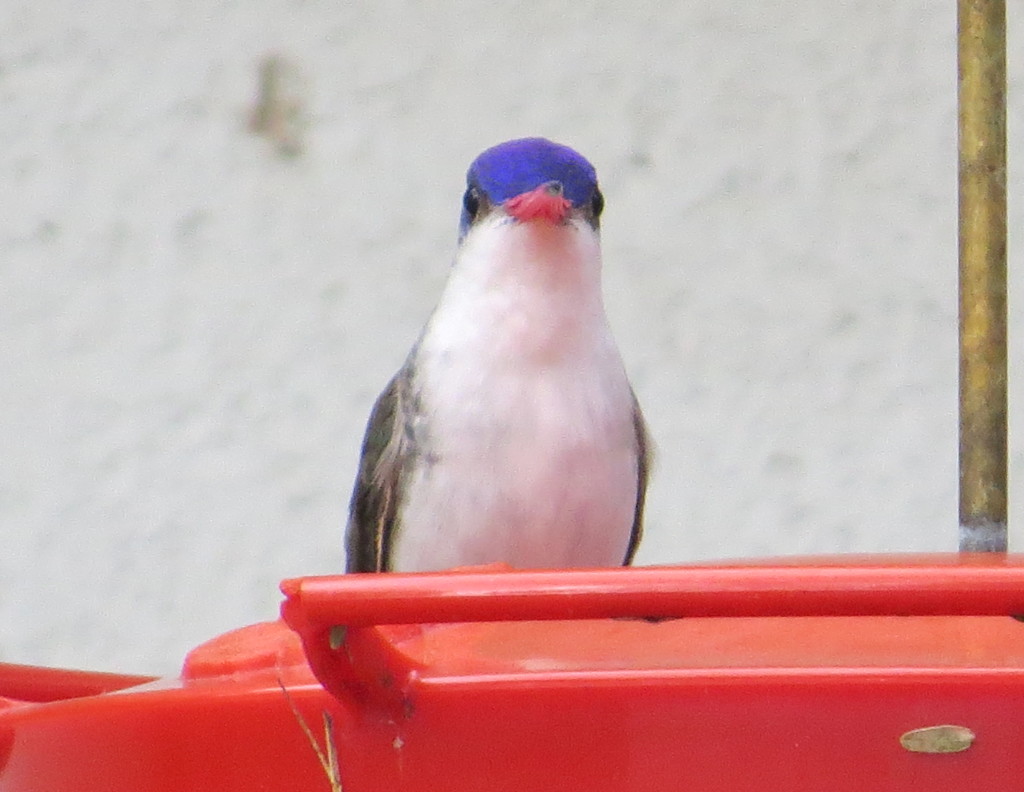 It knows it too. Like Orcas or Dolphins, it pandered to its gawking audience. 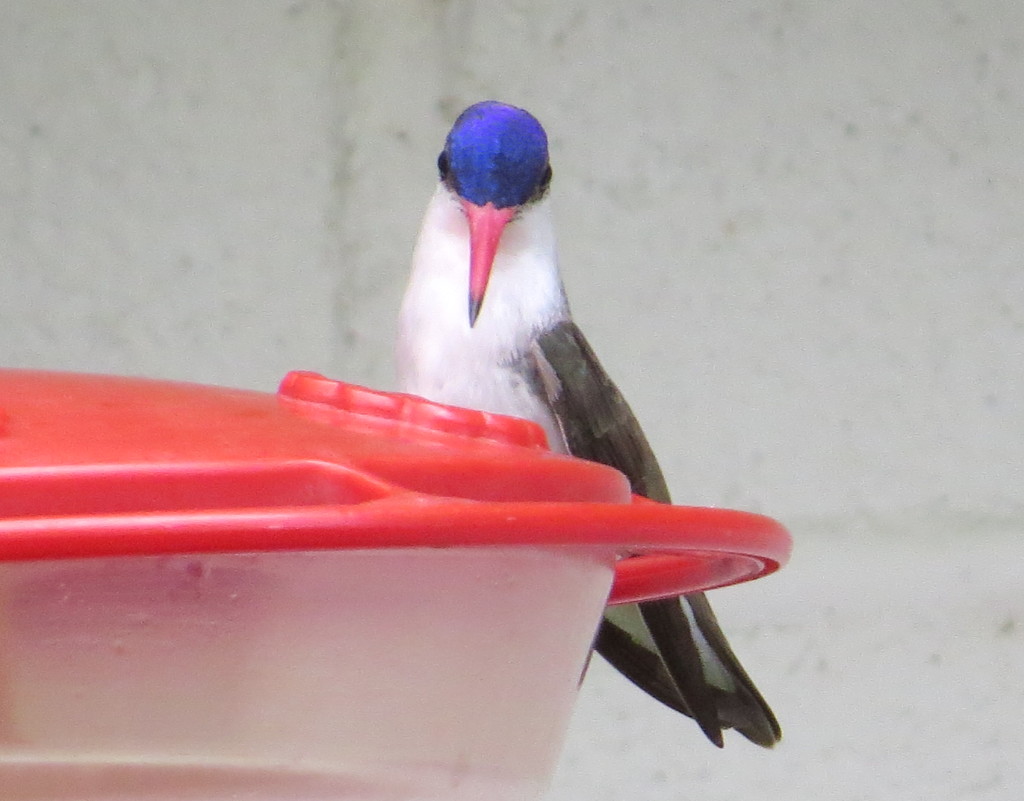 So that was that.  Tommy DeBardeleben and Gordon Karre had told me about a much rarer Hummer, the Plain-capped Starthroat, that had been seen regularly somewhere in Patagonia.  Not knowing exactly where to go for it and not feeling I could make yet another birding stop with the non-birding family, I didn’t even bother to check into it.

Instead, my family and I ate lunch at a park in Patagonia after a successful trip to Patons’.  It wasn’t until we were somewhere past Sonoita that it dawned on me–we ate lunch at a real life Patagonia picnic table.  And ironically, I don’t recall seeing/hearing a single bird in that park while we ate.  Back to that Plain-capped Starthroat, I also didn’t realize until we got home that we had driven within a block of that ultra-rare Mexican bird. I probably could have stopped to watch a feeder for a bit and not wrecked the family’s travel schedule. I am sure this will haunt me for years, possibly decades.

Moving on, we finally made it back to Maricopa. Before we got to my parents’ house, though, we had to check up on a couple of old friends in my parents’ neighborhood.  Love this guy (or gal–there’s one of each). 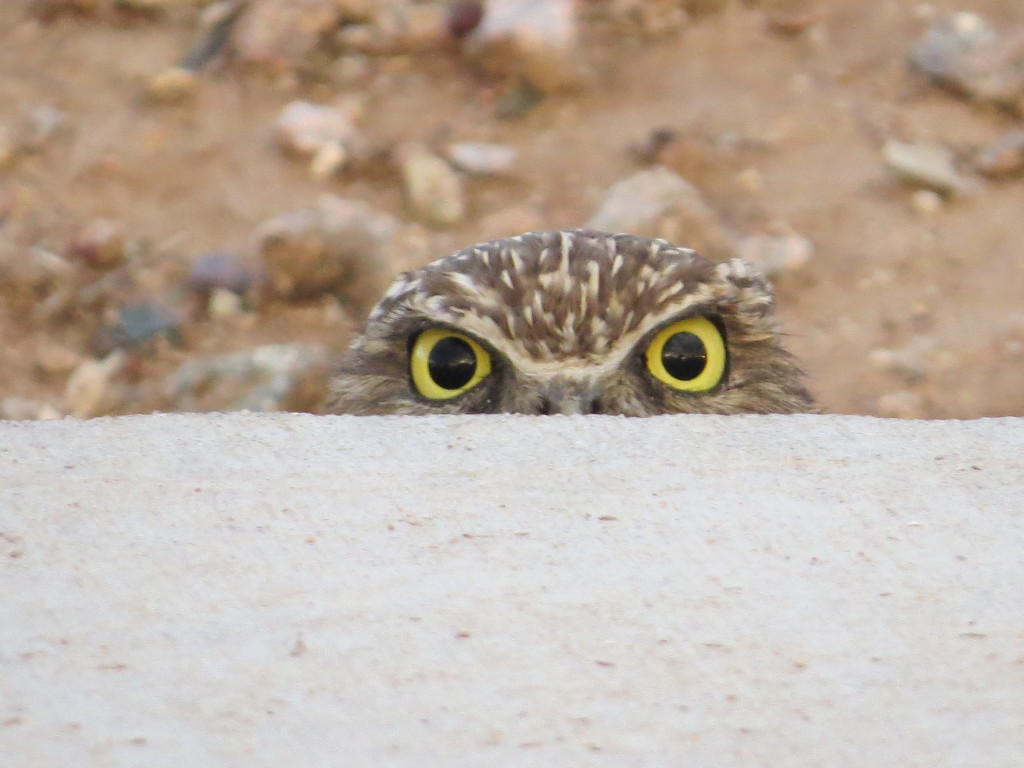 Scanning a residential pond in the low light of the evening, I was excited to see the brilliant pop of color of the male Vermilion Flycatcher in my binoculars.  They never get old. 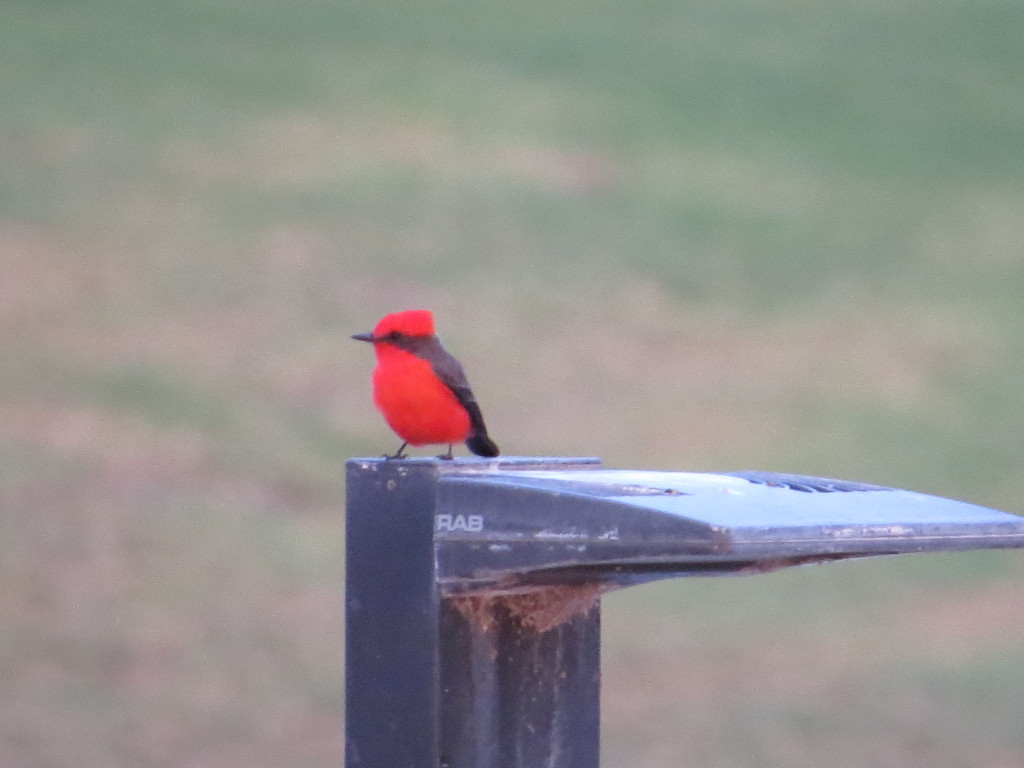 We also saw a Jackrabbit of some sort which was a cool experience. 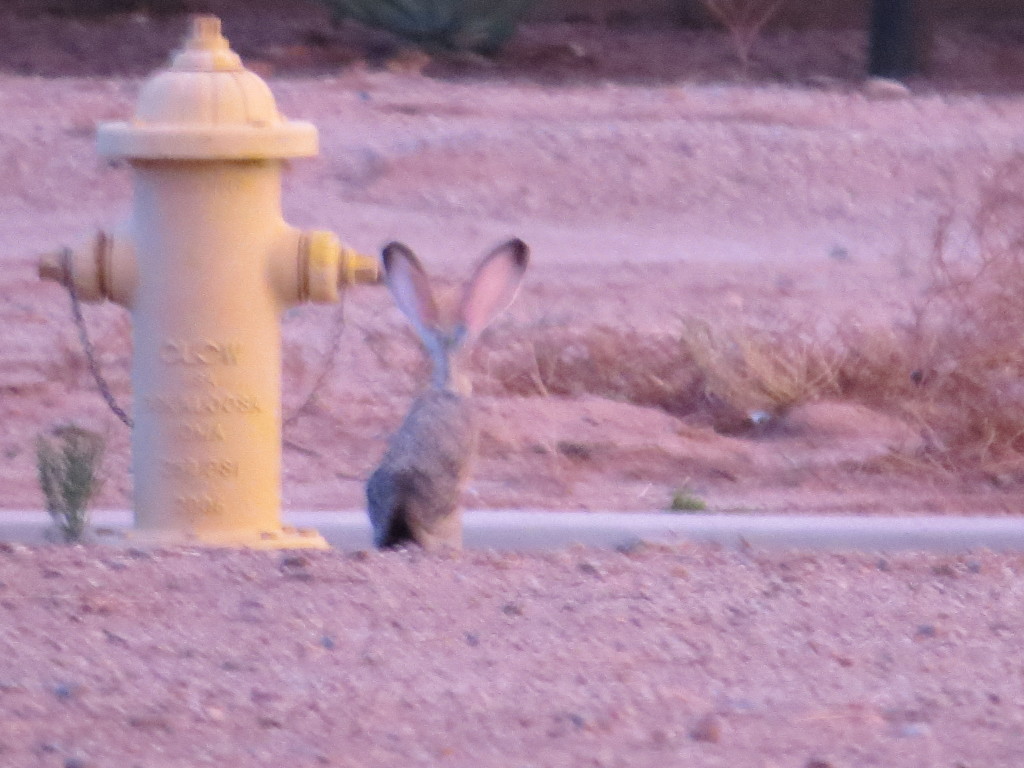 The Arizona fun isn’t over.  Next up is the final post and arguably the ugliest and cutest birds you will see.