The report was stunning. No–compelling. Sparky Stensaas had passed along a phenomenal sighting in a recent posting on MOU-net: nesting Black-backed Woodpeckers in a hole at eye-level in a tree actually touching a bog boardwalk in Orr. First, I’ve never seen Black-backed Woodpeckers, and birds with young in the nest are birds that are pinned down and easy to see. Second, the photos and videos coming out of Orr of two adult Black-backeds feeding young were phenomenal (eye-level, up-close views!). Third, Orr was where I grew up for the latter half of my childhood.  Fourth, this bogwalk was the Mickey Elverum Bog Walk, so named after the highly-regarded science teacher and well-loved father of a classmate.  Mr. Elverum passed away in the very year his daughter, Mariya, and the rest of our class were to have him as our 7th-grade science teacher. For all these reasons I had to go.

If these weren’t reason enough to make a fast trip, Sparky’s urgency was–the young would be fledging any day.  Though I had a scheduled trip to the Northland the following weekend, the consensus was that the birds would not wait until then.  Getting there fast was not so easy, though. Believe it or not, but I am trying my best to be a good adult and make sure I am taking care of all my various responsibilities. I just couldn’t get away. The report came in early on Friday, June 19th, but the soonest I could make my get-away was at the very end of the day on Father’s Day that Sunday. Area birder Dee Kuder had checked on the Woodpeckers that morning and reported that there was still a baby bird in the nest.  It was somewhat reassuring, but a lot could happen during the day. I tried to push that thought aside as I spent the day with my kids fishing and grilling out before going to my Dad’s on Father’s Day…never mind that the old man was already in bed when I rolled in the driveway.

For better or worse, the amount of daylight this far north this close to the Solstice won’t hold back the hardest of hard-core birders.  Darkness was just settling in at 10:30 when I arrived and was completely gone by the time I rose at 5:00. It was a nice surprise that the old birder himself to decided to get up and join me on my crazy quest to the old stomping grounds. 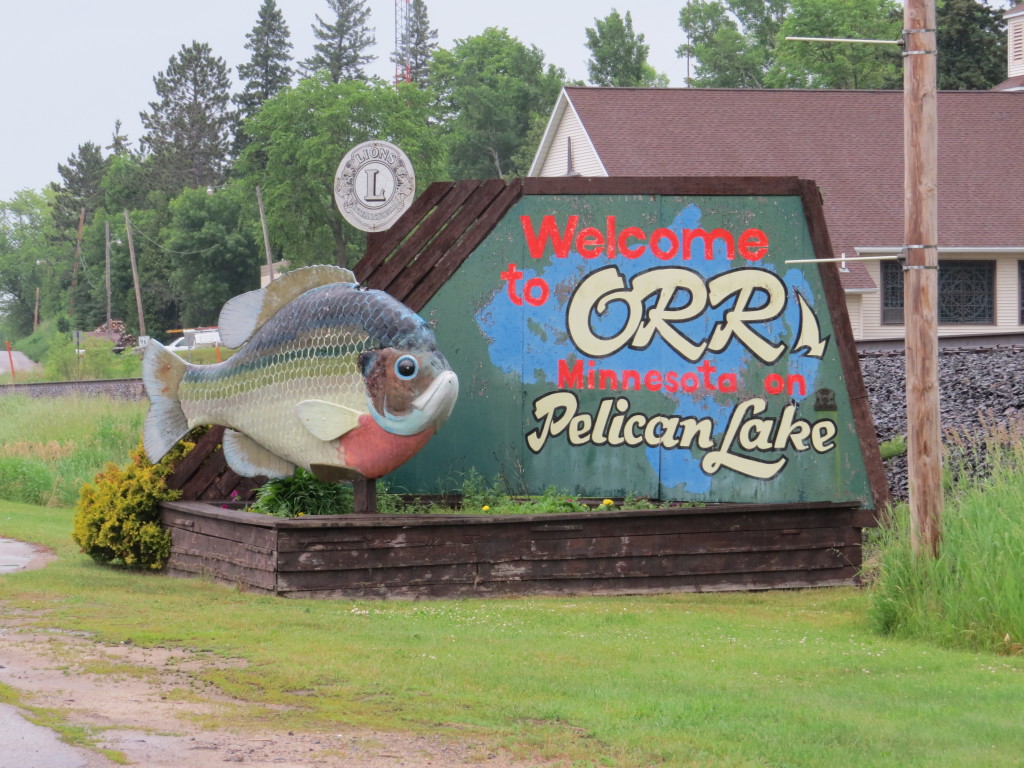 The weather forecast for the day was not good with thunderstorms all day long starting at 6 AM.  As we made the half-hour trip up to Orr, the rain paid no attention to the forecast and came a little earlier. Ugh. So much for good photography conditions IF the birds were even still there. Regardless, I had come 300 miles for this.  There was no turning back now. 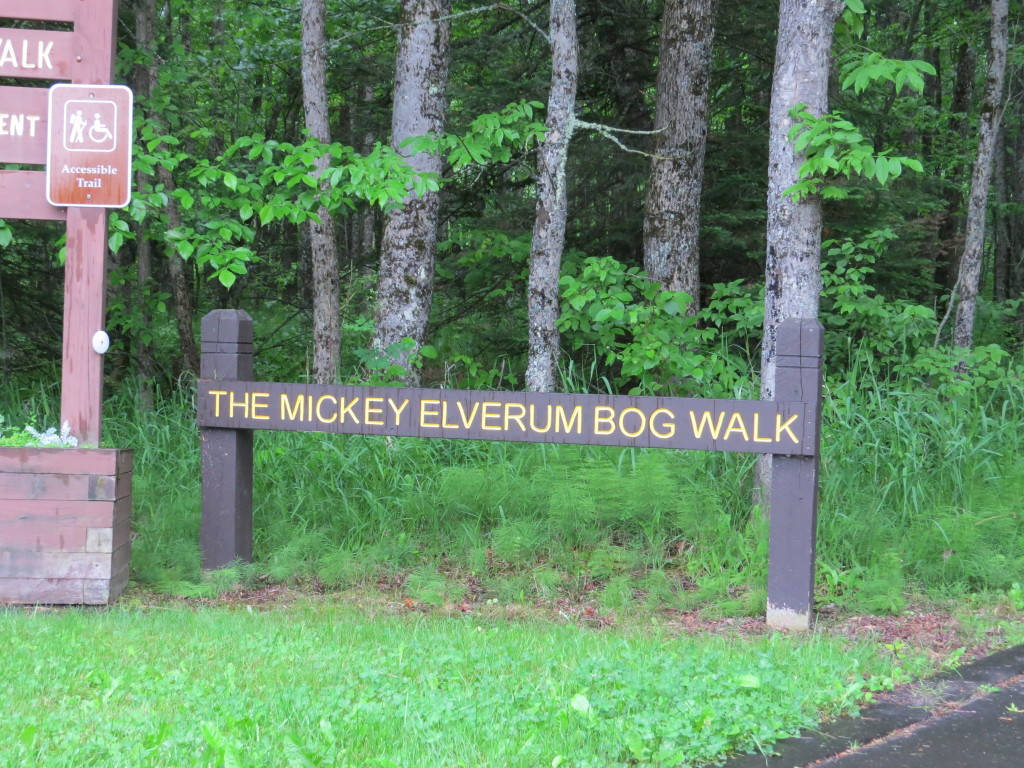 My memory’s a blur, but I think I left my dad in the dust as I raced down the Bog Walk to find the nest. Everyone said you can’t miss it; it’s right by the boardwalk and the young are making a holy racket.  It turns out you can miss it…by a day. 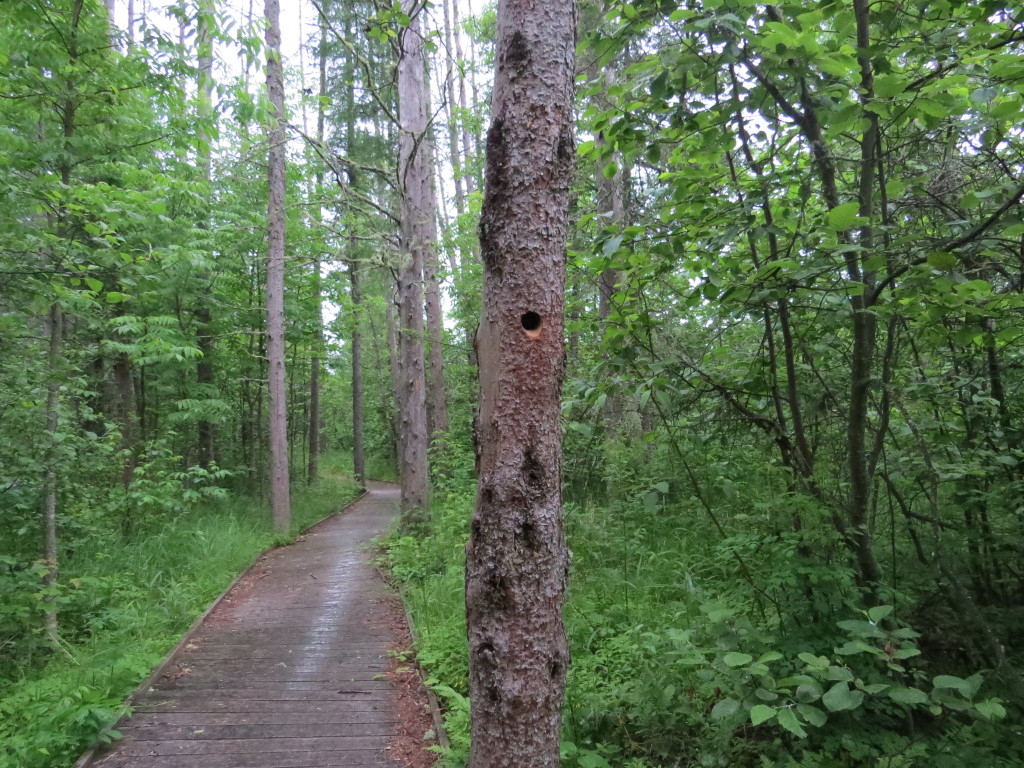 It was sickening.   I knew this outcome was a very real possibility, but knowledge and feelings are very different.  Adding injury to insult were hordes of mosquitoes and a steady rain.  In vain I looked and listened, but those Woodpeckers weren’t speaking to me.  It was a ghost town. I thought about giving up to get ahead start on licking my wounds on my 300 MILE DRIVE HOME. But then I remembered I’ve been in this spot before and have come out thriving.  Coming to mind were clutch birding moments from my past like getting the Chestnut-collared Longspur last minute at Felton Prairie last year with Steve Gardner or getting a lifer Blue Grosbeak at Blue Mounds State Park two years ago with Evan in a break in a rainstorm the last morning of our trip.  I sent Dad back to the car to get a reprieve from the rain and mosquitoes; I had work to do.

After walking the entire Bog Walk loop, I had circled back to the nest site and thought I heard the pik-pik-pik sound of a Woodpecker along with a muffled rattle call. It sounded kind of like the Black-backed recordings I’d listened to, but it was different.  It was subdued and was not an auditory match. The sounds were coming from the interior of the loop over 100 feet from the nest. I hiked to the other side of the relatively small loop and again heard the same sounds.  They were coming from the middle of this loop.  I had to find out if that was my bird.  I needed to do some real bog walking.  I knew the loop was relatively small, but even still, I thought it would be pretty stupid to go into the swamp on a cloudy morning without telling anyone.  I went back to get Dad.  He came out with his umbrella and stood on the boardwalk to be a voice that could call me out of the abyss if I got turned around.

In I went, feet soaked from pockets of water in the boggy floor and clothes drenched from rubbing on the flora. No turning back.  After a short walk I finally located the tree that held the bird.  But I couldn’t see it in a dead tree even though it was close!  Finally, I laid eyes on my lifer–a baby Black-backed Woodpecker, who was in the nest less than 24 hours ago.  I hollered to Dad that I got it. 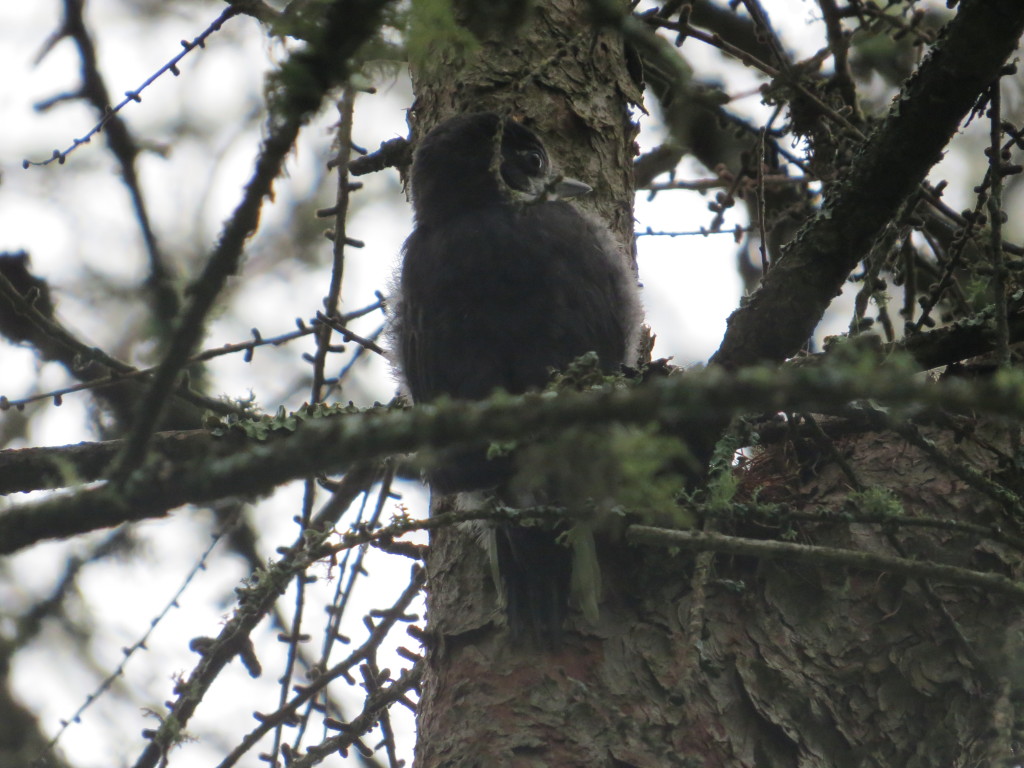 The suppressed calls I was hearing now made sense as this was a young male just learning his voice.  Though not that evident in this photo, you can see the yellow spot on the forehead.  Watching it long enough, I eventually saw momma come in. 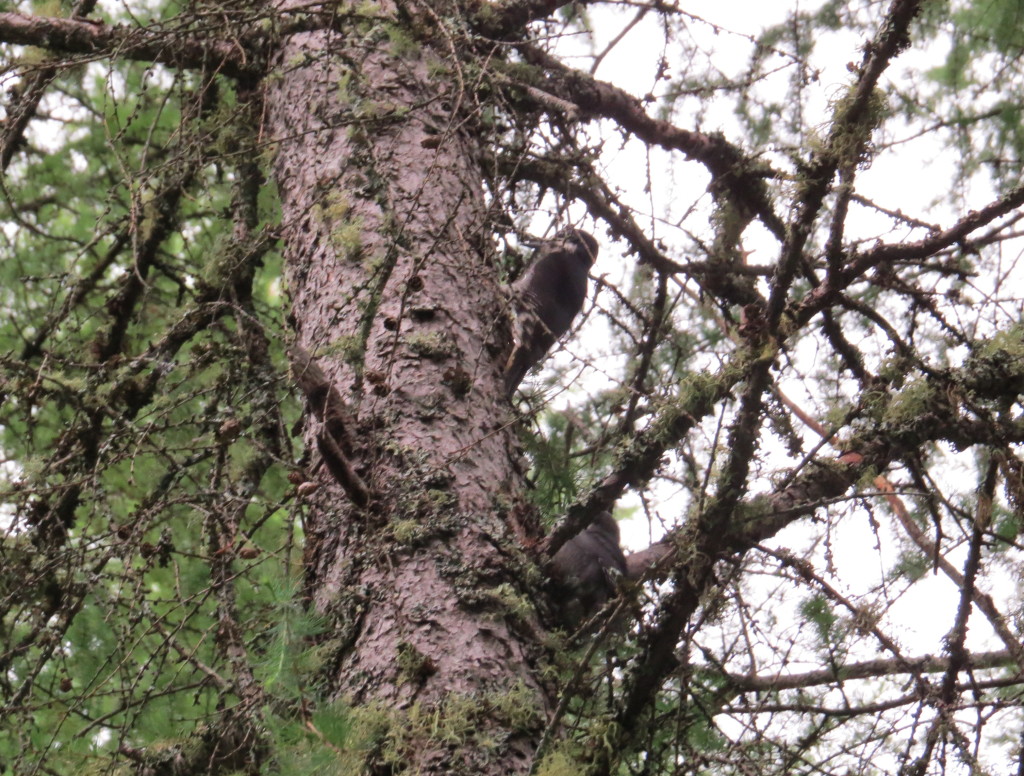 It was pretty adorable to watch this motionless youngster take his first hops up the tree while watching mom.  She would bring him food and then disappear. His constant calling would start up immediately.  She would leave him for long stretches which drew him out of his comfort zone and caused him to literally stretch his wings as he’d make short flights to nearby trees.  It was incredible to witness this bird’s first flights. 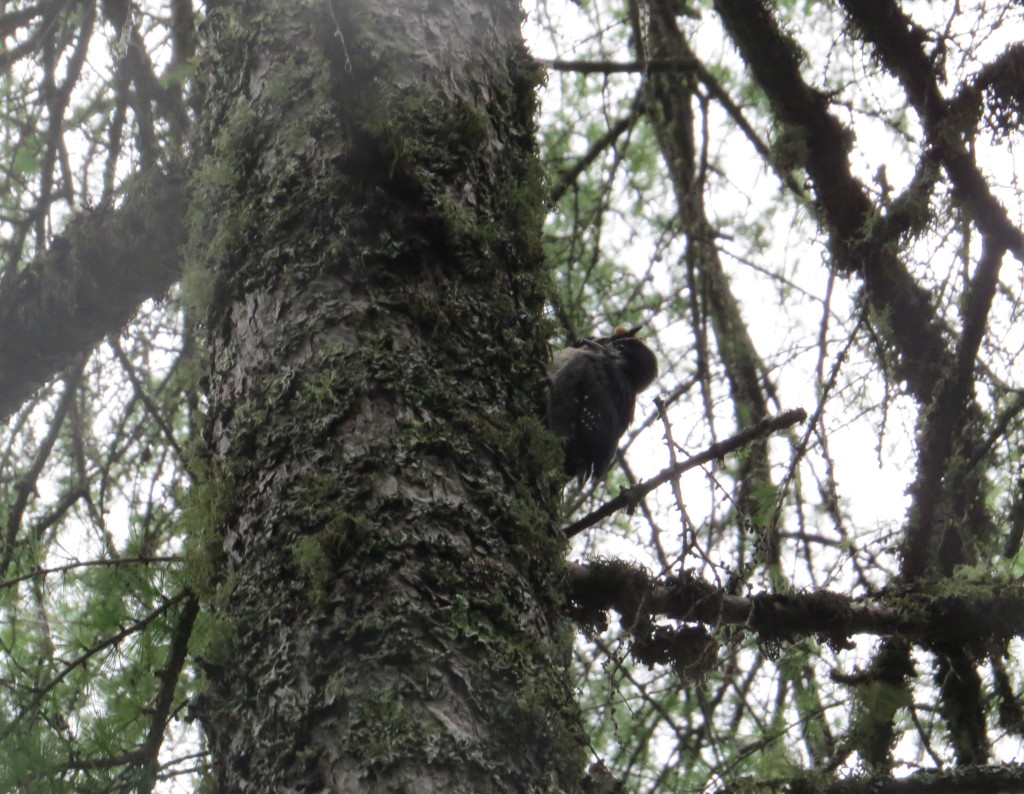 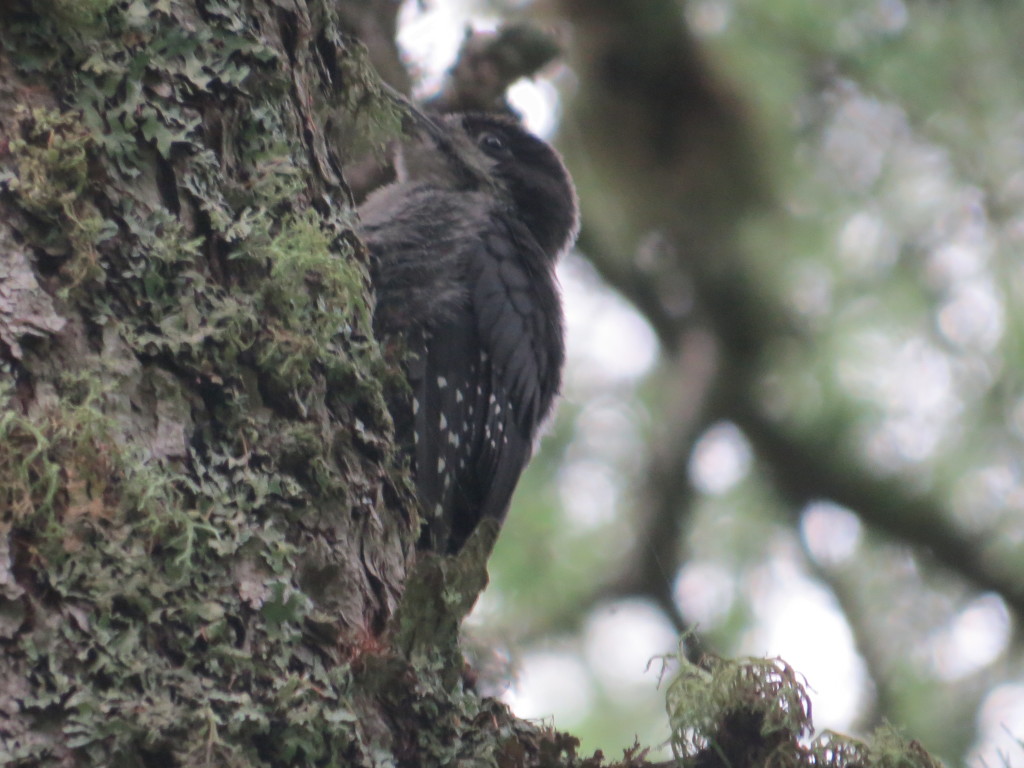 I really wanted pictures of mom and dad, though, especially dad with that golden yellow crown.  Eventually momma and baby made their way to the trees by the boardwalk with me shortly and soggily behind them.  Dad was able to get his life looks at this bird now too and then proceeded to be my spotter for photographing them. 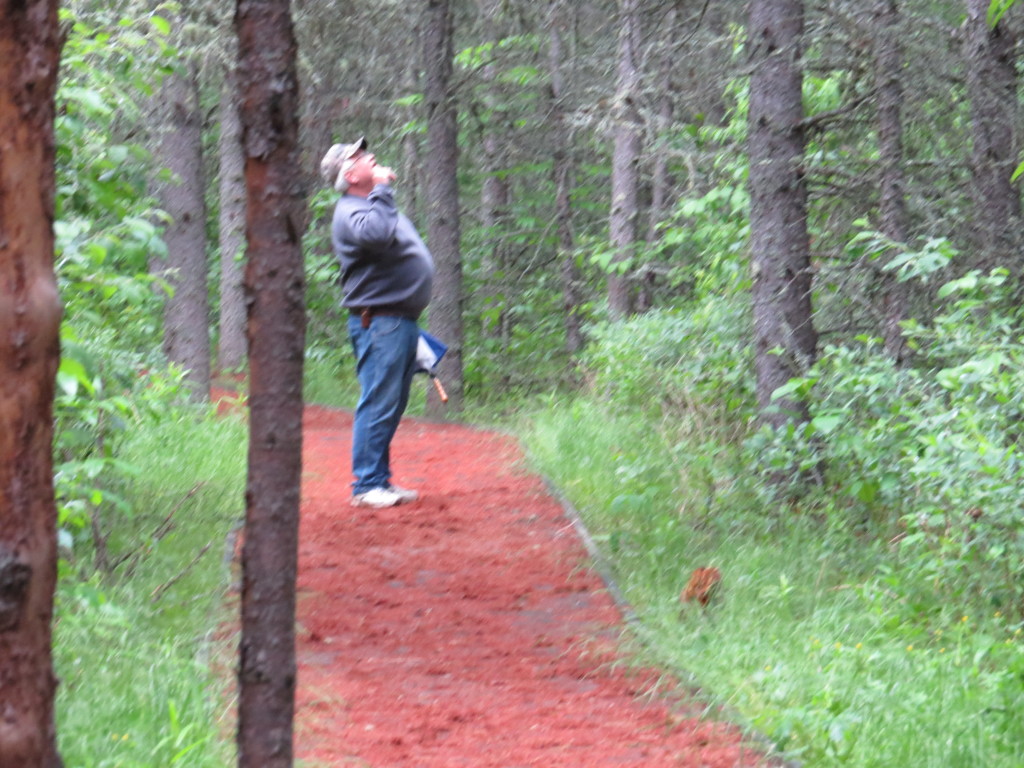 With the low light conditions that exist in a bog at dawn on a rainy day, I needed all the chances I could get in order to get any kind of decent photo.  We positioned ourselves within earshot of the calling baby and sure enough, we’d get frequent looks at the mother as she would forage for food to bring back to baby. 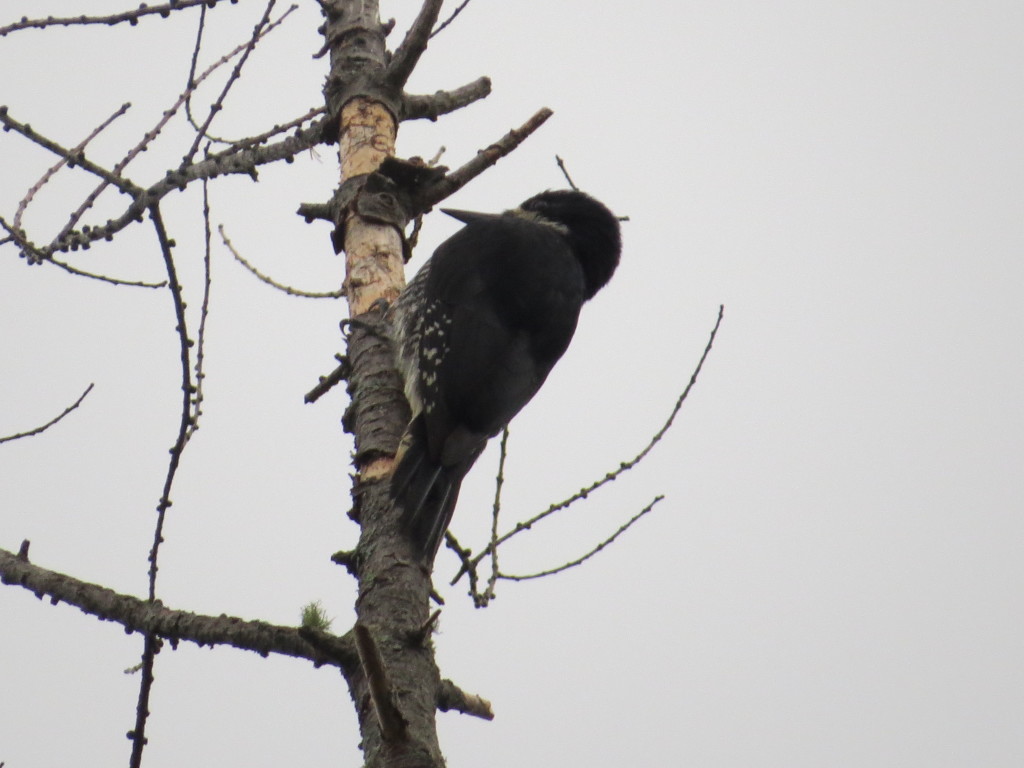 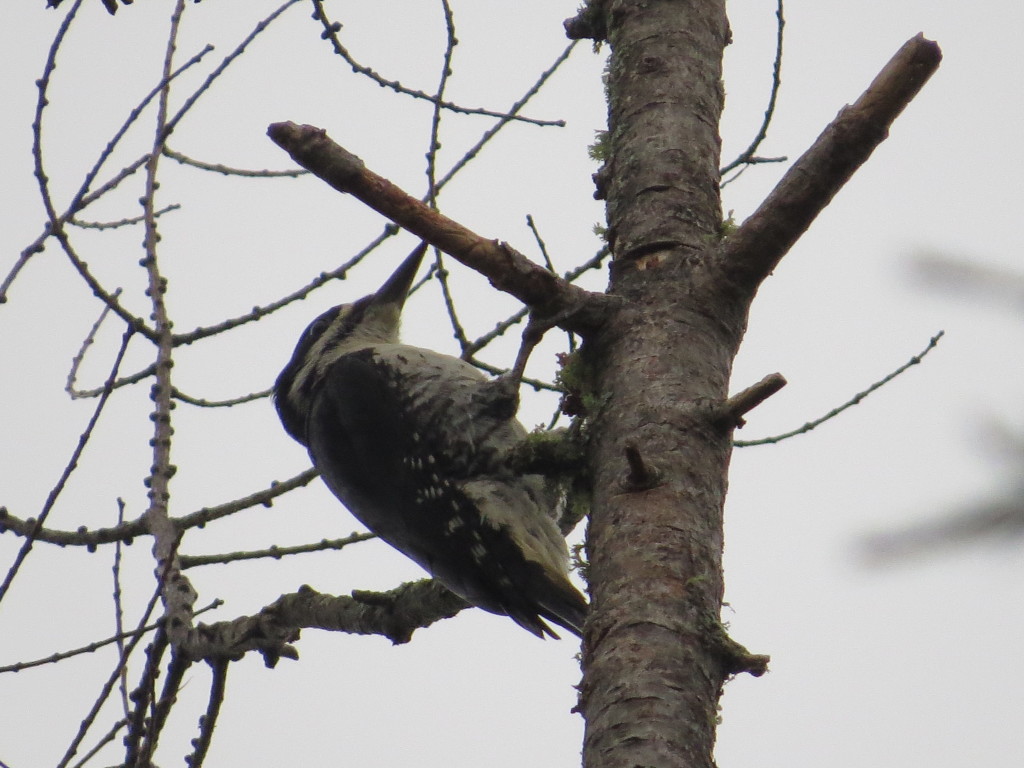 The jet-black back of these birds really stands out.  You can see how it would be effective camouflage in their preferred habitat of recently burned forests. 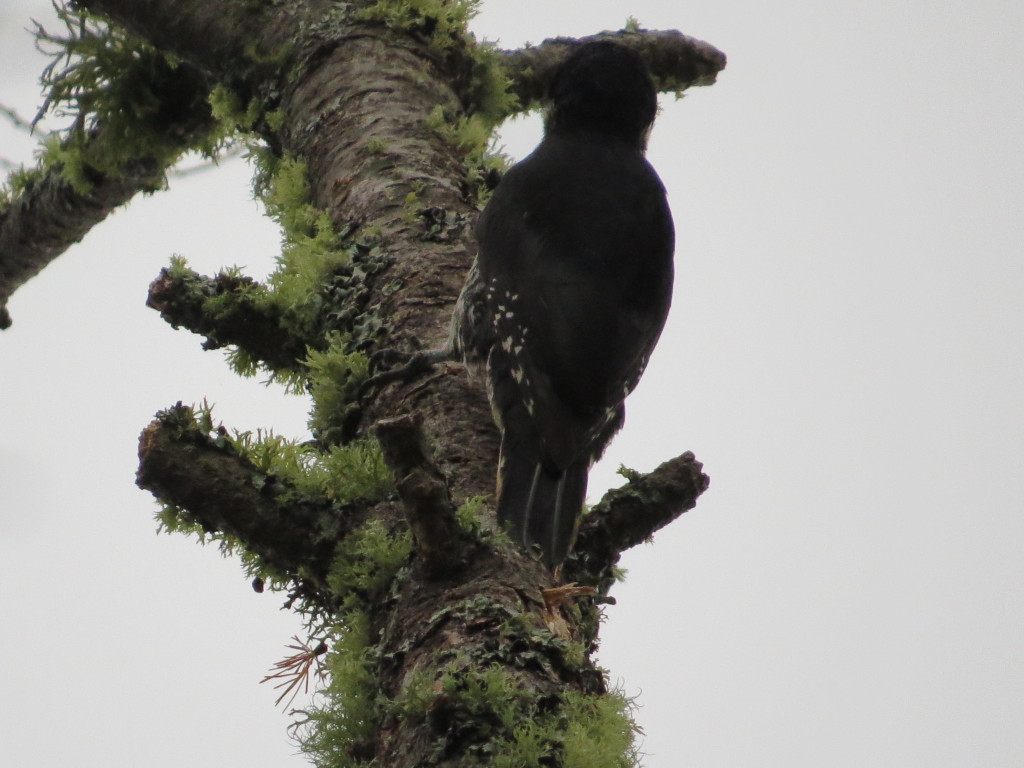 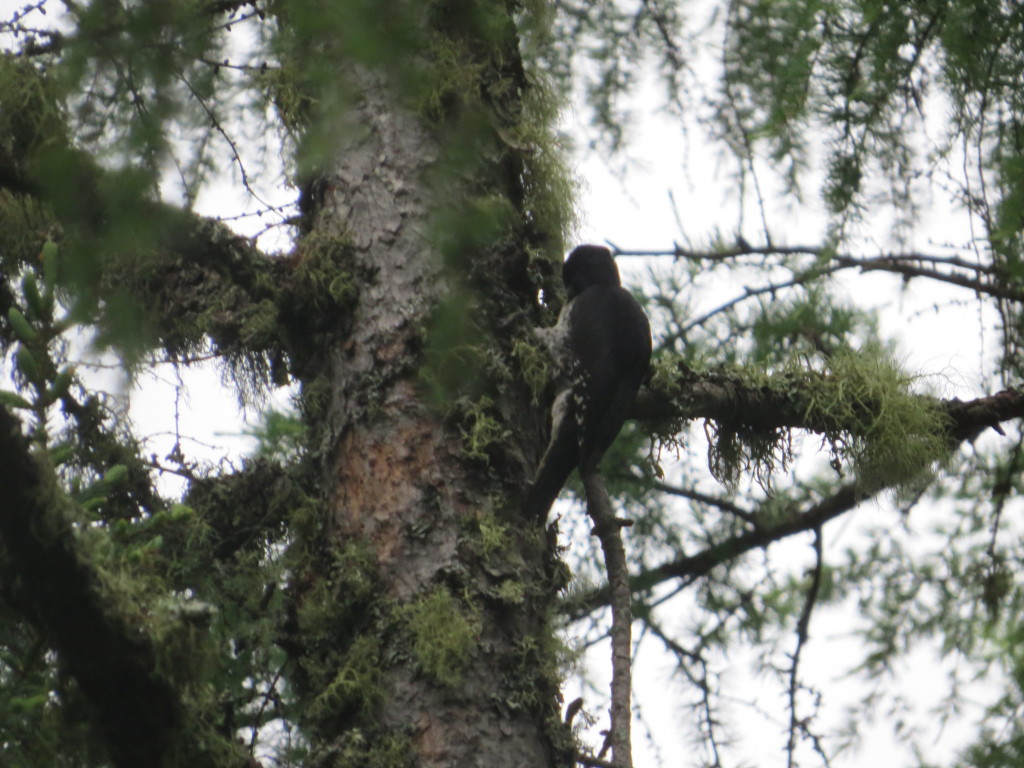 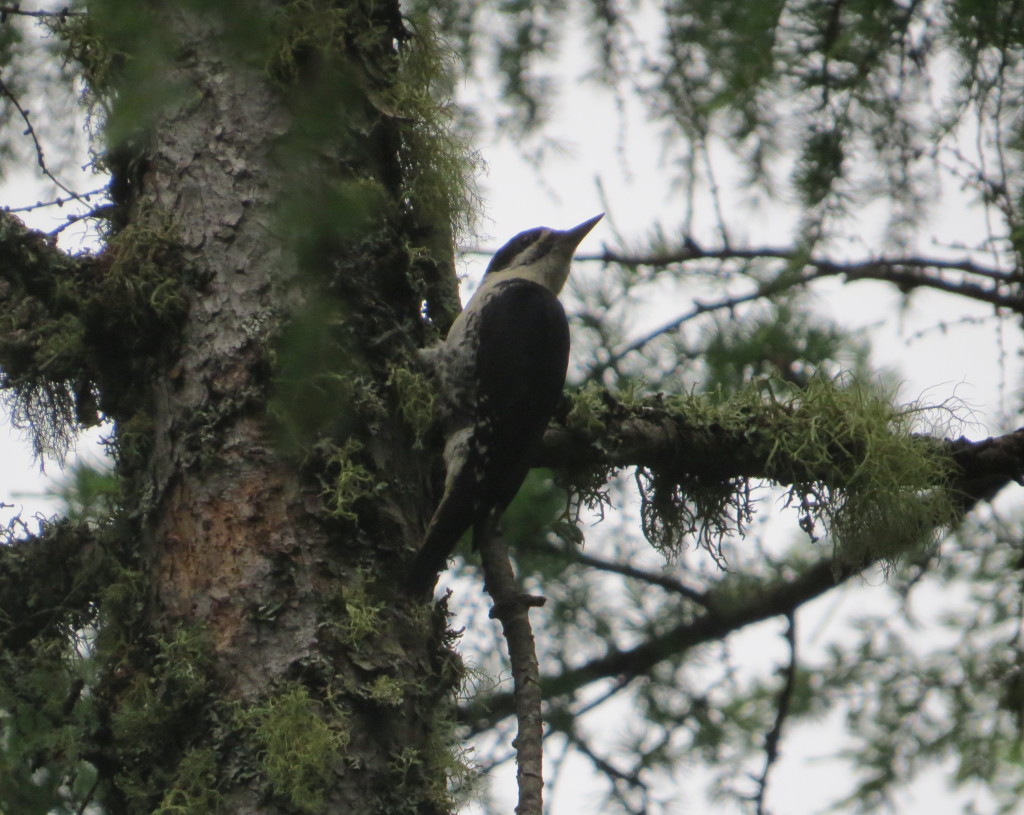 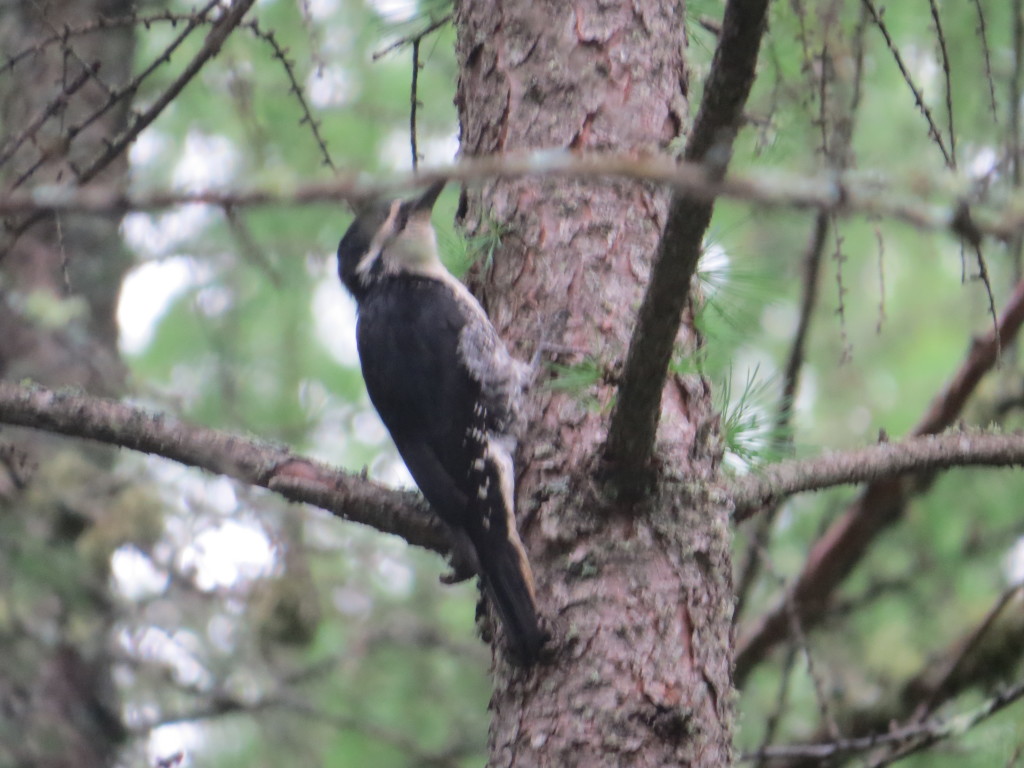 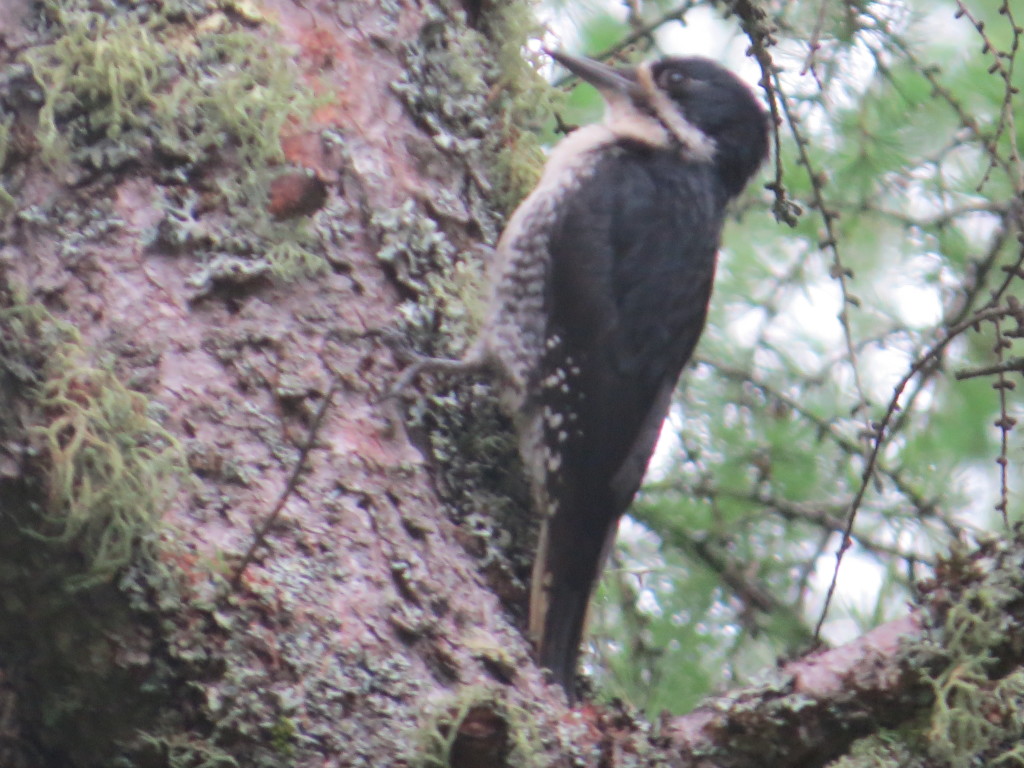 Despite the poor conditions for photography, getting this much-wanted lifer in this way in this place with this company was pretty special.  After all, we’d all be stuck on some metaphorical tree without the guidance of a parent.  Mine even called me out of the literal trees and gave me dry socks for the ride home. 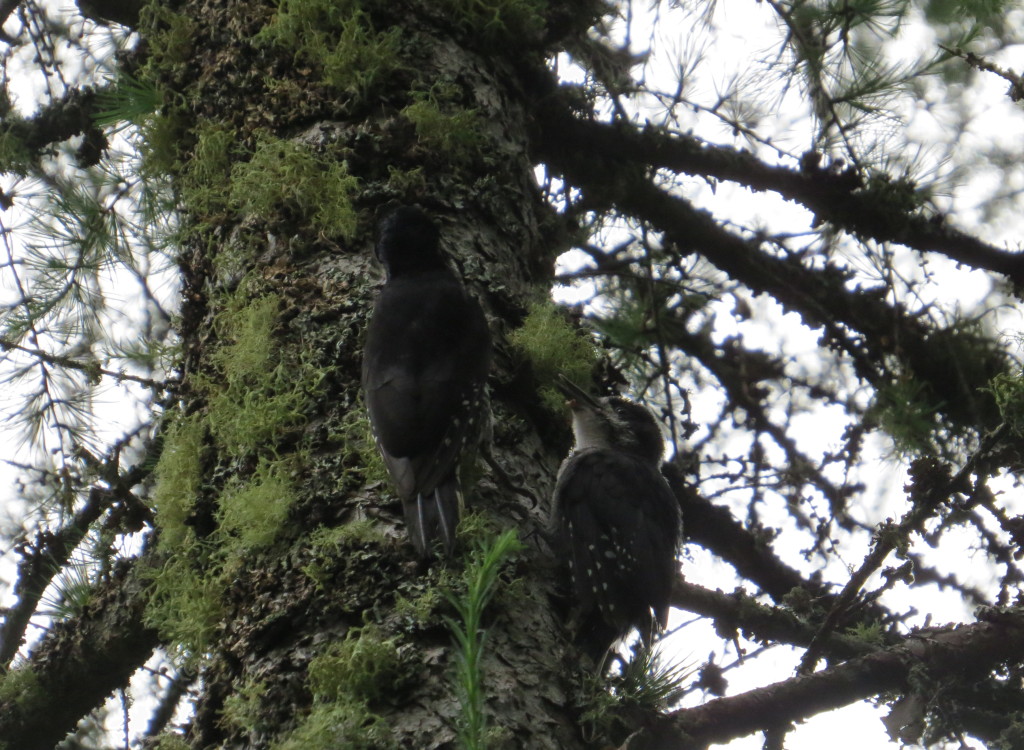 This post is dedicated to the memory of Mickey Elverum and science teachers everywhere that continue to inspire curiosity in our natural world.

6 thoughts on “(Blacked) Backs Against the Wall”