I had seen the report and dismissed it quickly.  There was no way that a White-eyed Vireo would stick around long enough to chase it. Their presence in Minnesota during migration is ephemeral. Then I got a phone call a couple weeks ago that changed my thinking.  Ron Erpelding, a locally-based 87-county lister, calls me whenever something good shows up within a reasonable distance from Willmar.  Ron told me that he went to see the Vireo at Flandrau State Park in New Ulm a few days after the initial sighting and that it was singing up a storm.  Hmmm. Could it be that this misplaced Vireo was trying to set up a territory for the summer?

The singing White-eyed Vireo was intriguing on its own.  The location, though, was what pushed the decision to chase over the edge.  New Ulm was only an hour-and-a-half away, but more importantly, it was the city where Melissa and I got our first teaching jobs.  This chase would be a family affair and a chance for Melissa and I to revisit a beautiful place we called home for a few years and show the kids our first school, first house, etc.  It’s always held a special place in our hearts.

Nestled in the scenic Minnesota River Valley, New Ulm boasts the highest per capita population of German descendents, and it shows. It is a town where the industriousness of its residents is showcased in well-kept, stately brick homes and perfectly landscaped yards (there is no bad part of town), and the love of beer and all things sausage is proclaimed everywhere.  It is a town where you can (and I did) roll out the barrel.  You name a season, and I’ll name a beer festival for that season.  New Ulm is the only place in America, and this is no joke, where schools offer up vats of sauerkraut on hot dog day and the kids pile it on.  Life is a continual party in New Ulm, and partying it up just upriver from the famed Schell’s Brewery was a little bird I wanted to see.

After a quick drive-by of the old house, we went straight to Flandrau State Park right in town on the Cottonwood River.  There were other birders responding to the call and making the short hike along the river to the spot.  One guy, Bill Marengo, was in the parking lot and told us the bird was indeed present this morning. Yes! 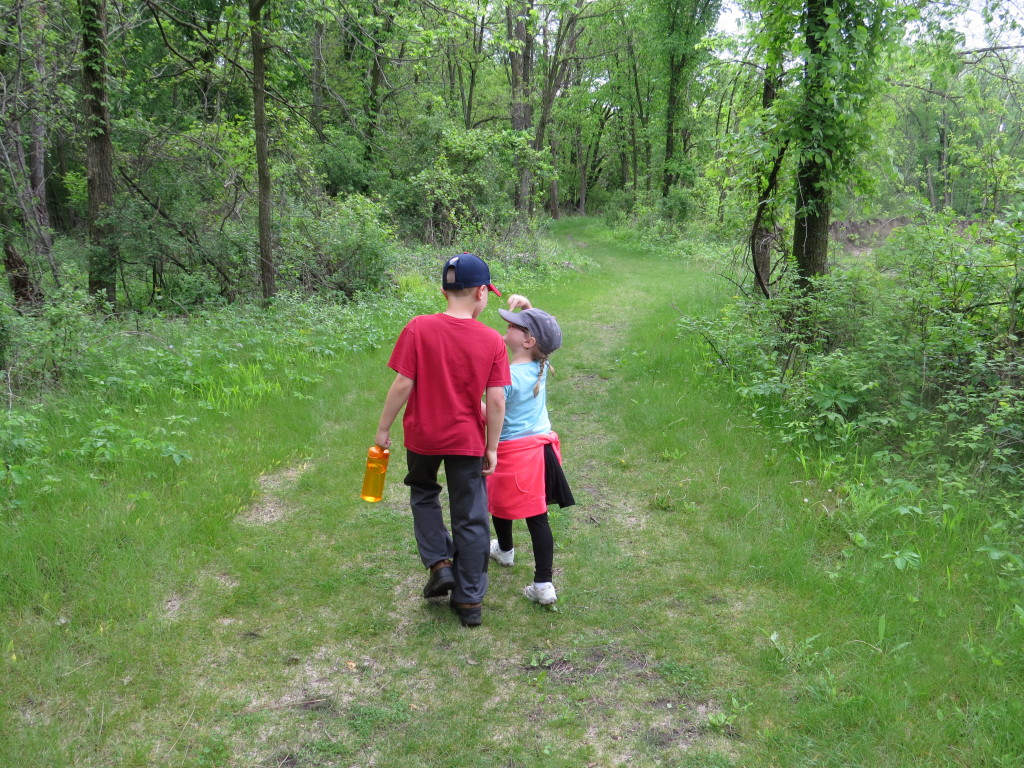 Getting to the scene a few hundred yards down the trail, I heard the bird immediately.  Several birders and I strained to locate it.  One lady claimed she saw it. 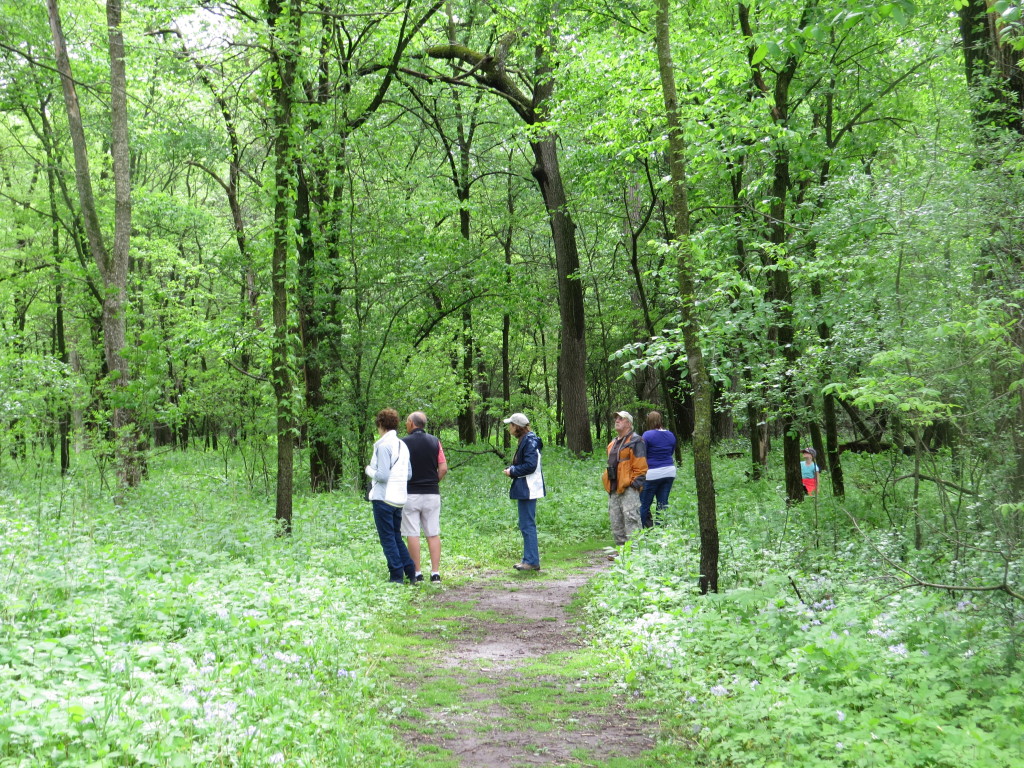 The rest of us didn’t.  Then, we weren’t hearing it at all.  After an hour or so, I decided to call it quits.  You can only stare at the same trees for so long.  Hiking back to the parking lot I checked my email and saw an eye-bulging report from the very same Bill Marengo with whom we had just spoken.  He had made his way over the waste-water treatment ponds in nearby Sleepy Eye and found gobs of shorebirds–really good shorebirds. The trip went from being a downer to all the sudden being exciting again.

Once we were back at the car at Flandrau, there were some FOY Indigo Buntings to enjoy– a paltry, albeit lovely, consolation prize.  The promise of some shorebird lifering was making up for any disappointment over the White-eyed Vireo. 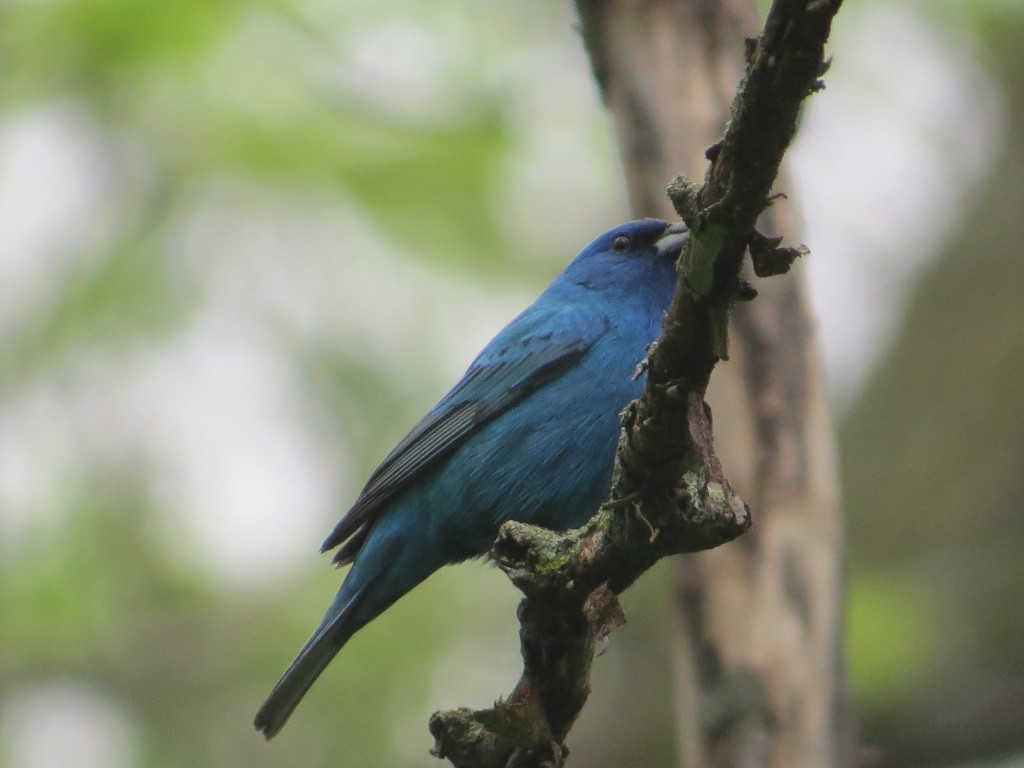 Before we left, I thought I heard the soft bee-buzzzz call of a Blue-winged Warbler.  Nah, couldn’t be…

Even with a heard-only White-eyed Vireo and several potential lifers in Sleepy Eye, probably the best find of the day came when we stopped for a hot dog lunch at one of our old haunts, the Kwik Trip. (And yes, there was a huge tub of sauerkraut with the condiments). As we were leaving, who should we run into but our old neighbor and friend, Adam! The next half hour passed quickly as we reminisced, laughed, and caught up with Adam; I didn’t even have the usual anxiety when life birds are on the line.

Eventually we did part company and make the 15-minute drive to Sleepy Eye.  Bill wasn’t kidding about the shorebirds.  There were two main groups, each in different ponds and close to the entrance. 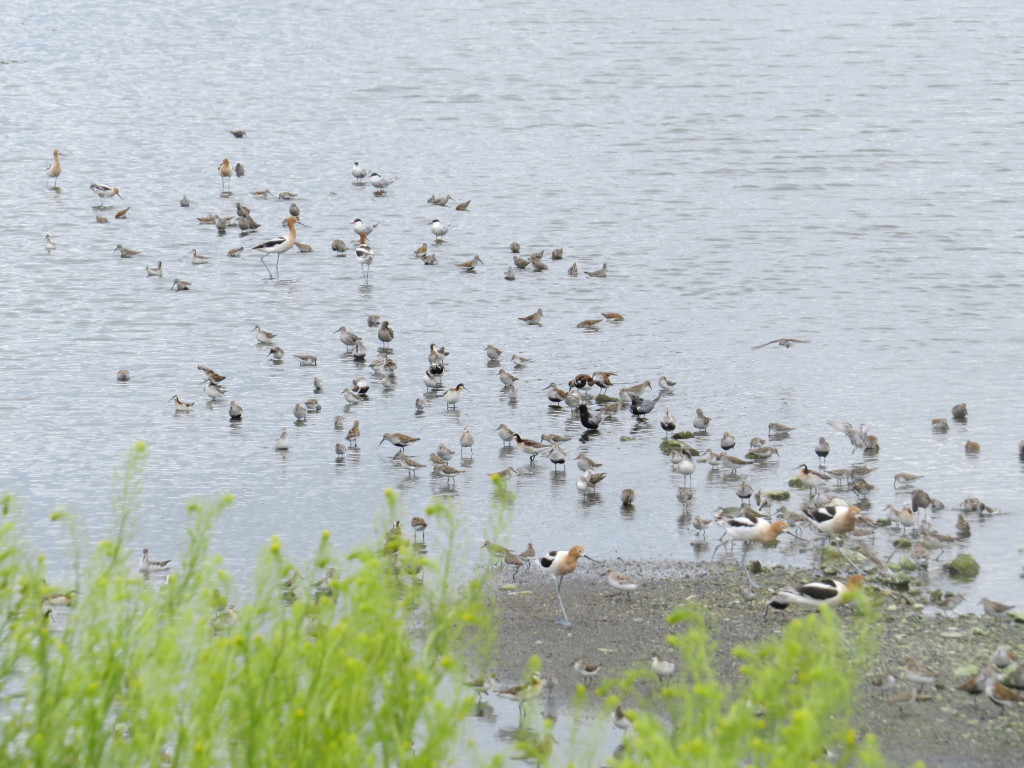 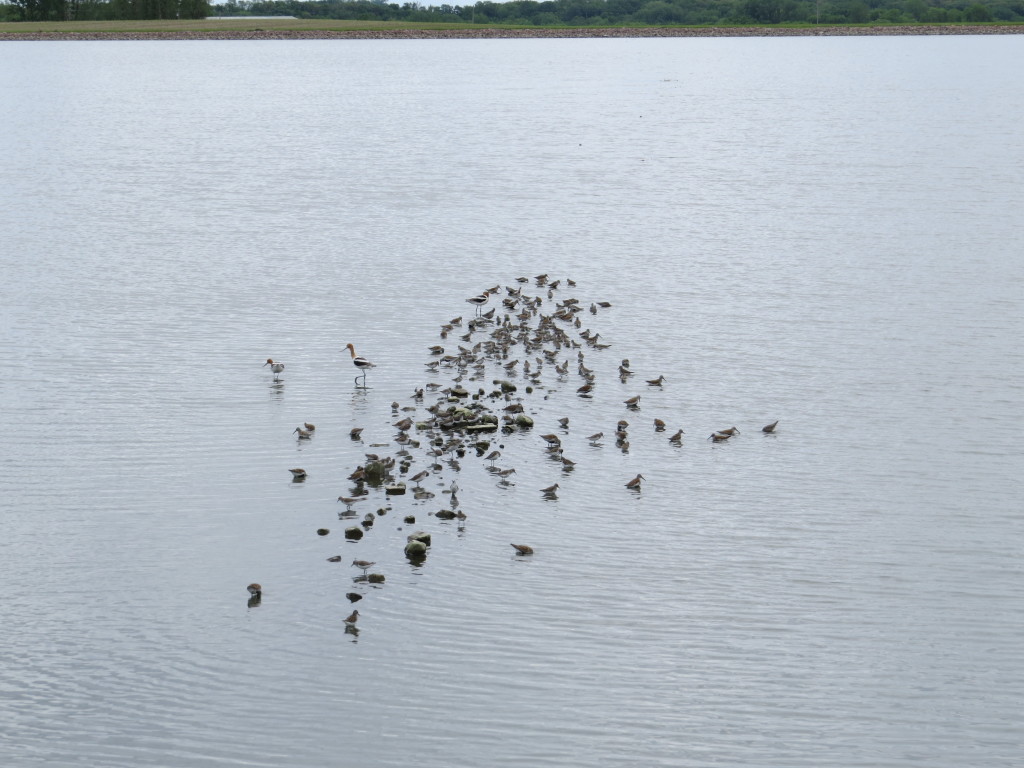 Birders who read this have probably already tried to sort through some of the goodies in these photos.  When I was sorting through them in real life, I was looking for one, larger bird in particular that Bill reported–the Hudsonian Godwit. 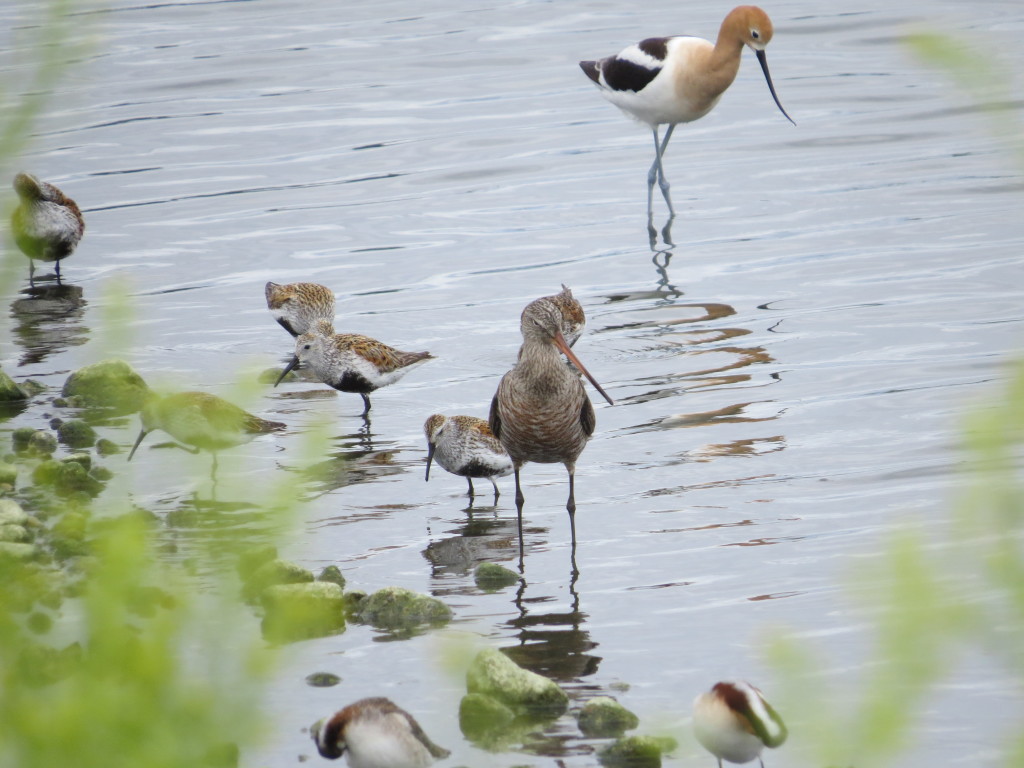 It was not the more striking male that I was hoping for, but when it comes to Hudwits, beggars can’t be choosers. 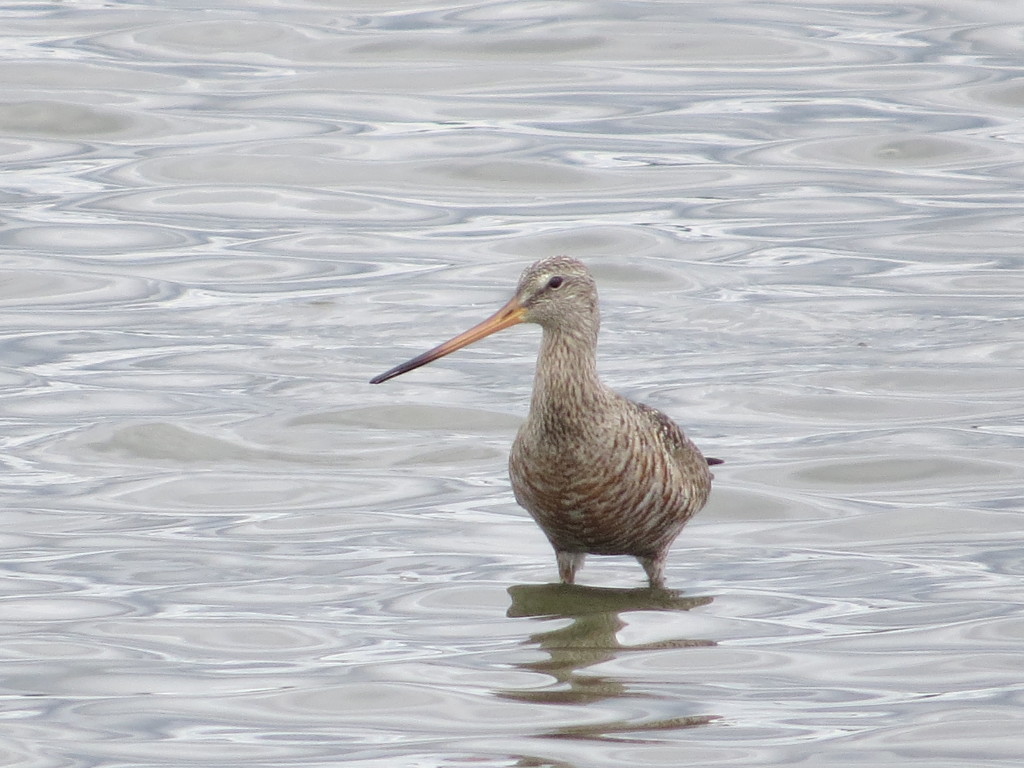 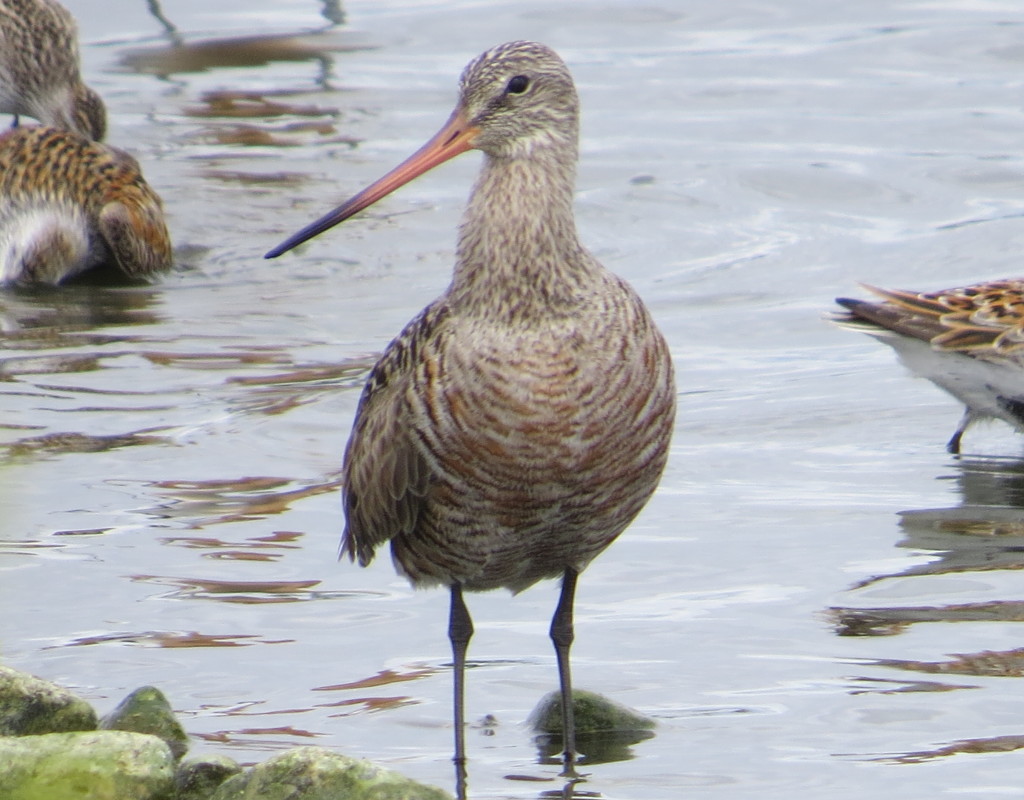 It was pretty sweet to pick up this unexpected life bird, but the fun didn’t stop there.  Bill Marengo was still on the scene and helped me pick out a Sanderling lifer, even letting Evan and I get some good scope views.  I was surprised by how plump they are and close in size to the Dunlin. 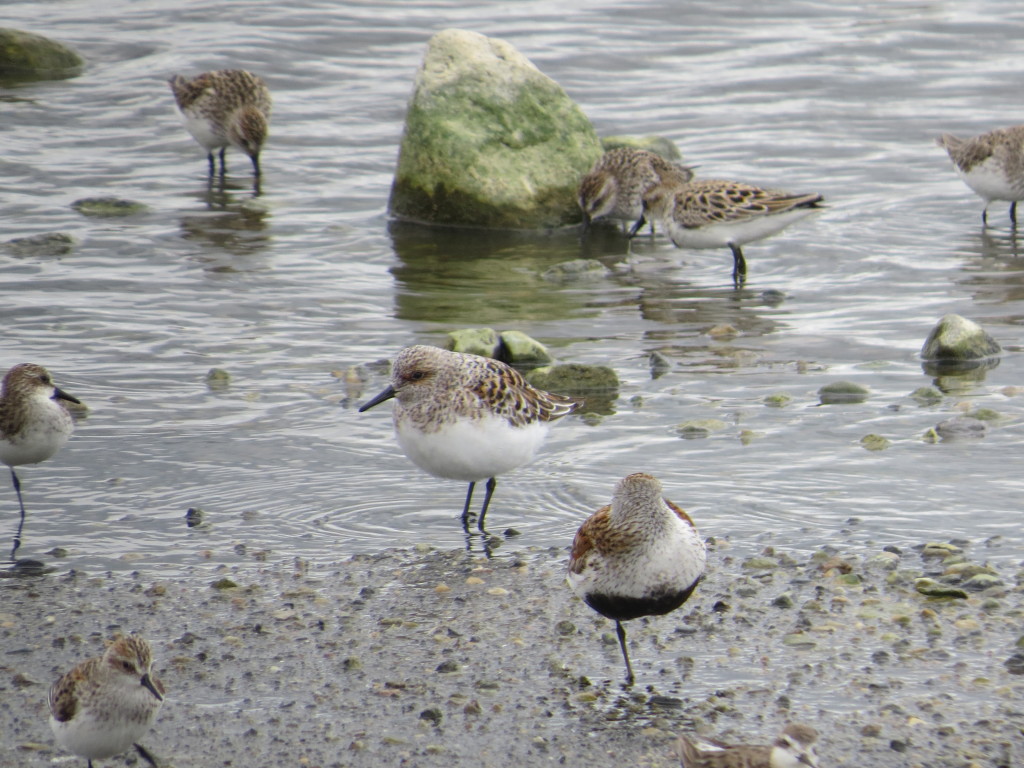 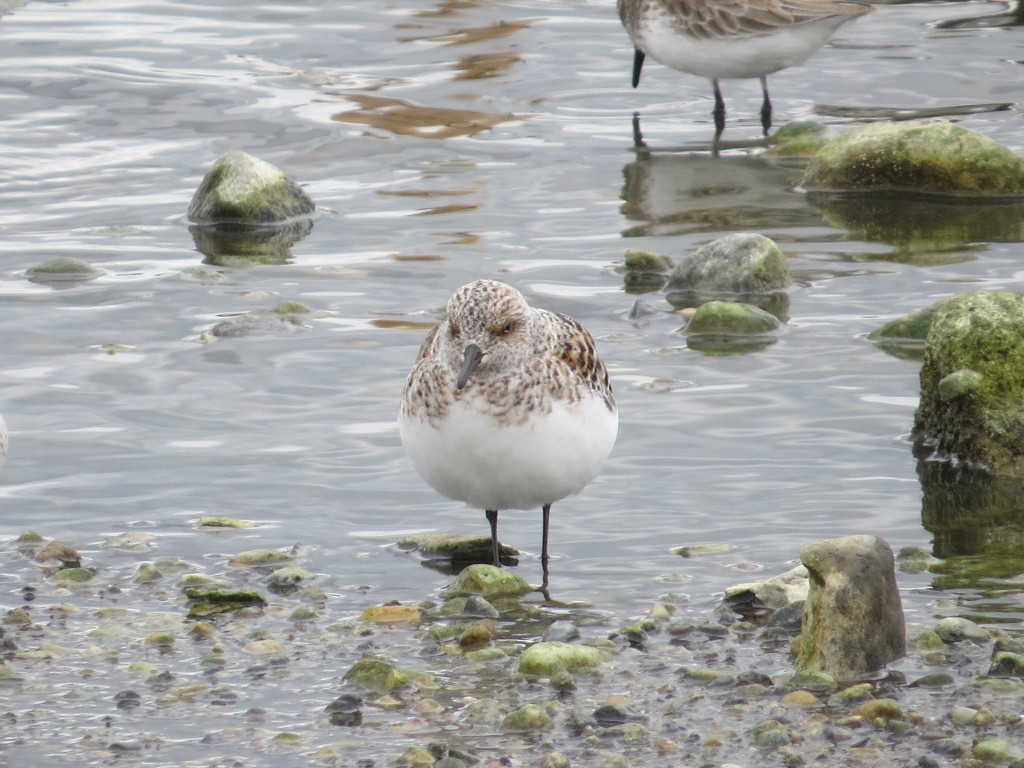 If two unplanned lifers weren’t enough, how about a third?!  Several Terns caught my eye right away when we got to the ponds.  Their bills looked excessively reddish and other clues were leading me to the conclusion that I was looking at Common Terns, which aren’t so common in Minnesota compared to the excessively common Forster’s Tern. 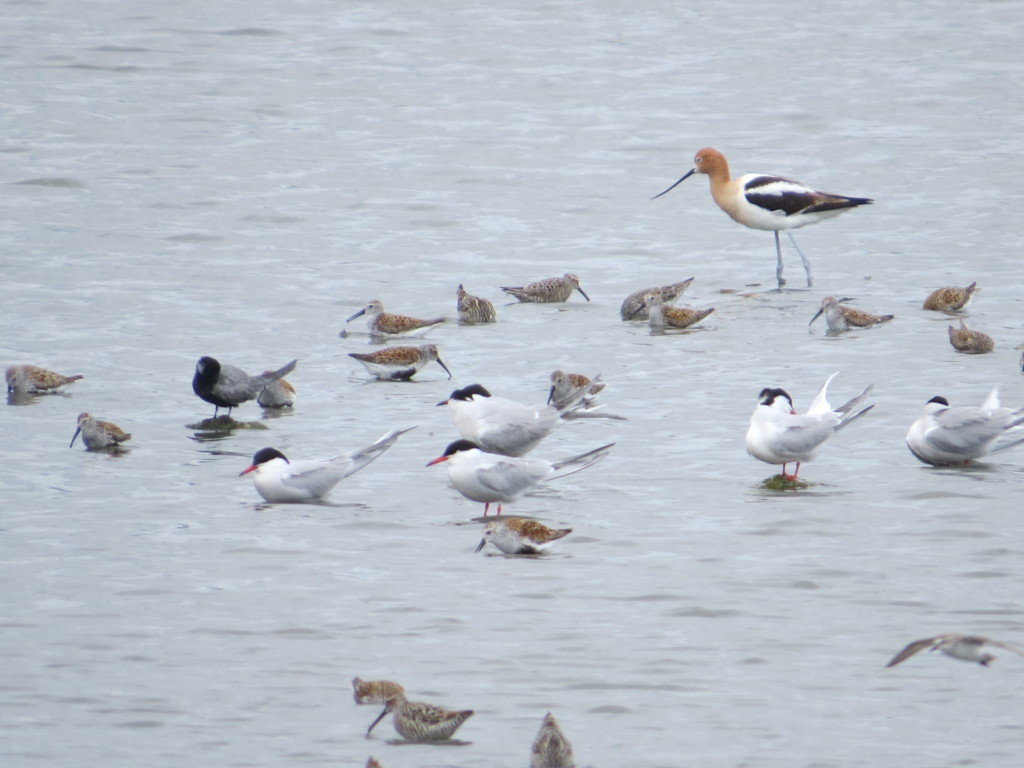 I spent much time agonizing over this ID after the fact as Common and Forster’s Terns are incredibly similar looking.  Many hours were spent scouring images on Google, studying Sibley, etc.  Common Terns have reddish-orange bills while Forster’s Terns have a straight-up orange color.   The red really popped when I looked at these birds.

Another field mark of the Common Tern are the wings.  The primaries of a Common are gray and flush with the tail while the primaries of the Forster’s are whitish or frosty and shorter than the much longer tail. 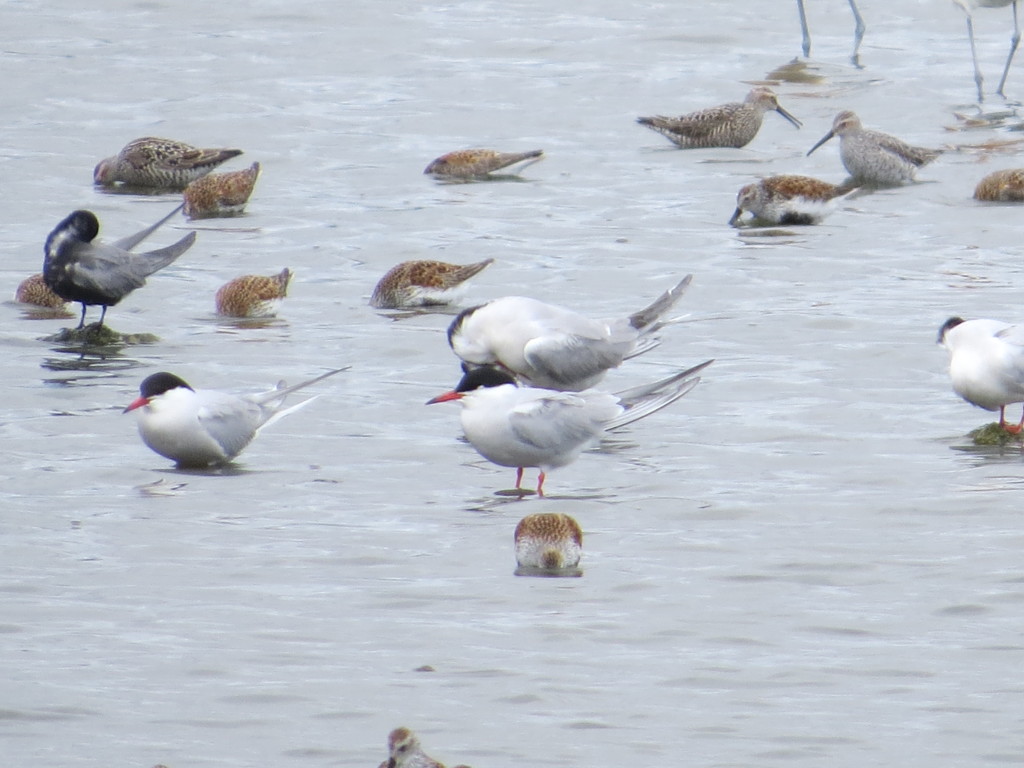 Finally, I found evidence of a remnant dark carpal bar which Common Terns have during the winter months before the black bar fades to gray. 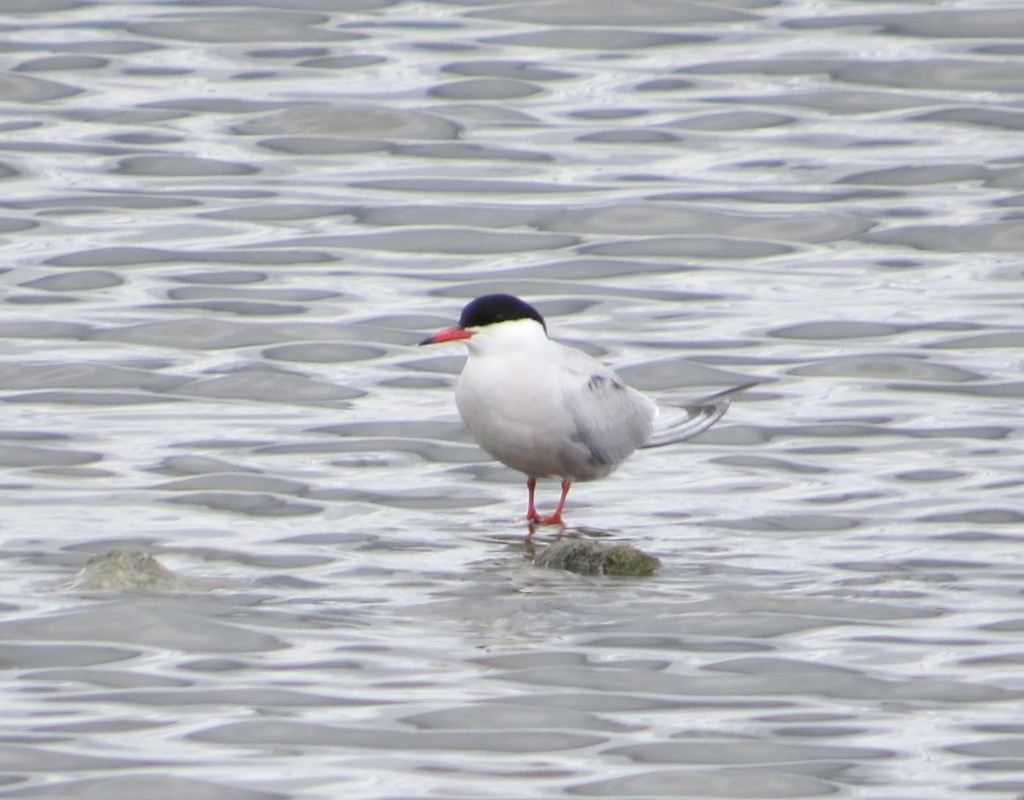 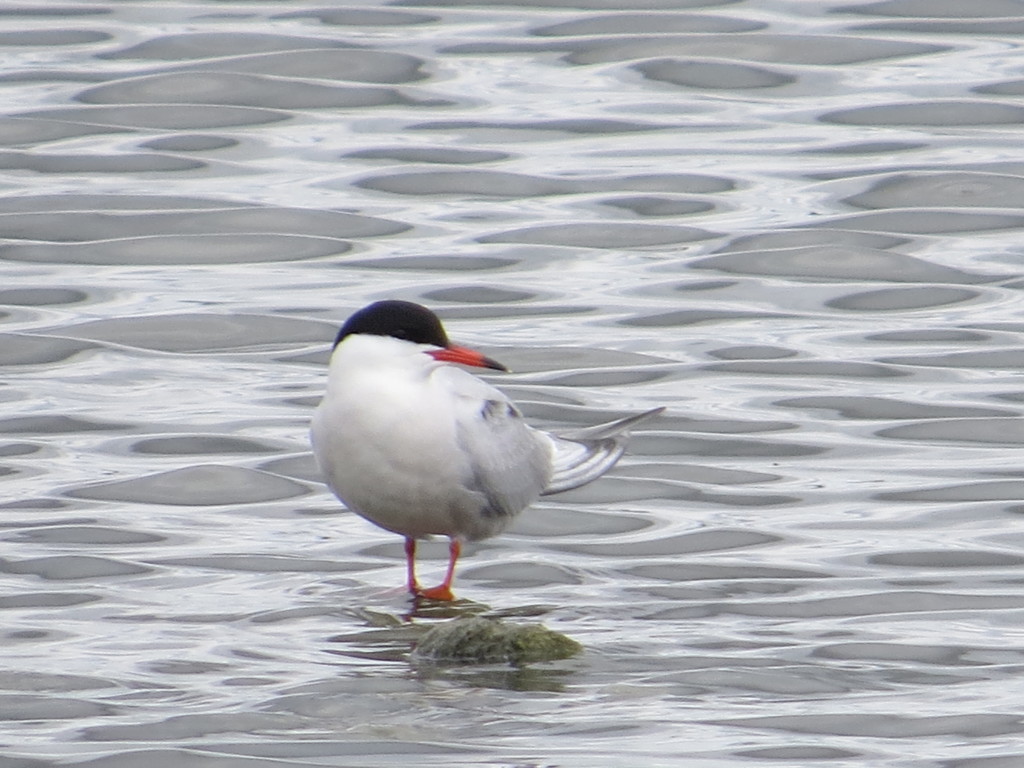 The birders among you have already detected some great shorebirds.  American Avocets were plentiful with a dozen birds representing their species.  This elegant bird is always a rare treat during migration in Minnesota. 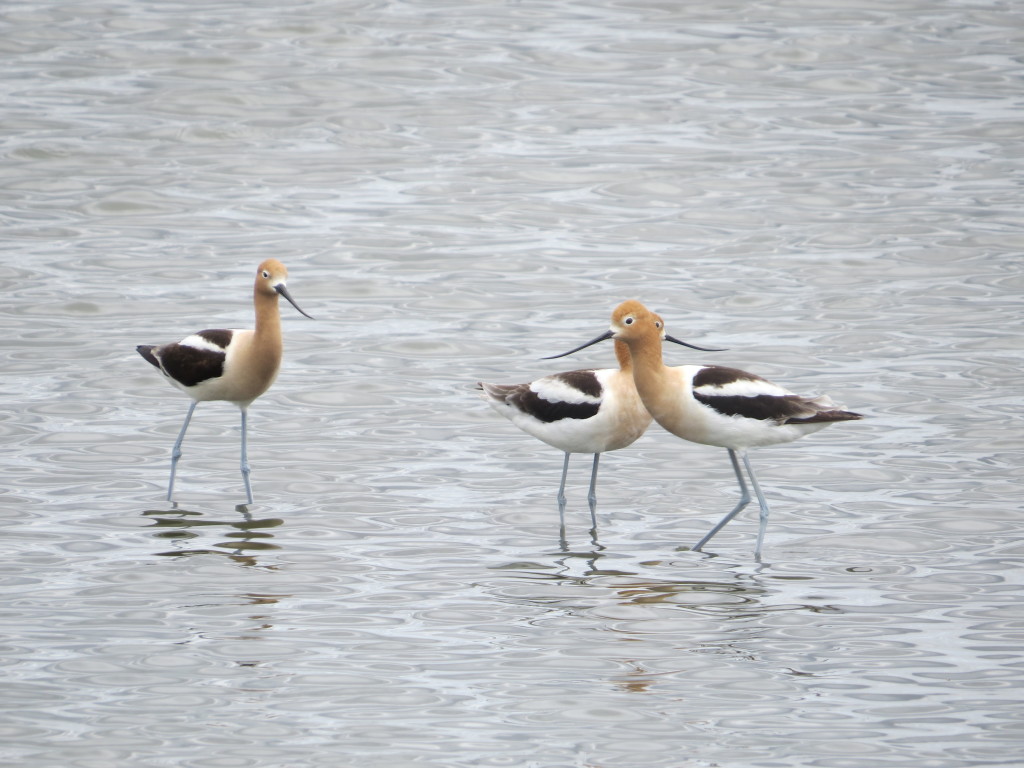 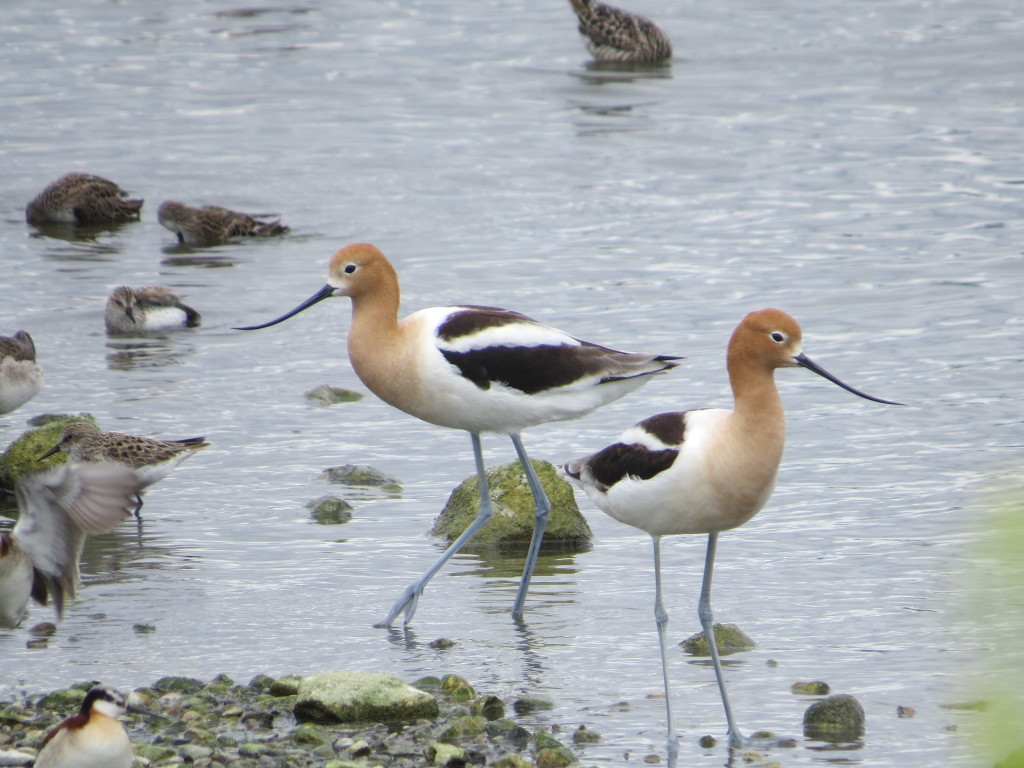 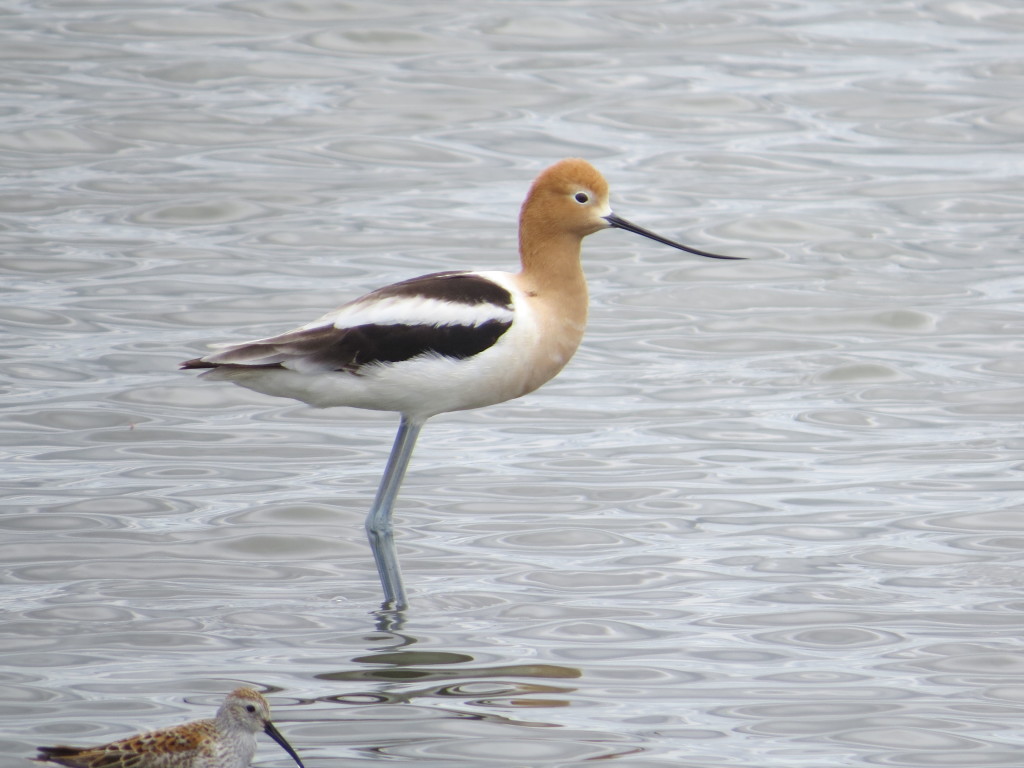 Black Terns are summer residents here, but it was nice to see one up close and still. 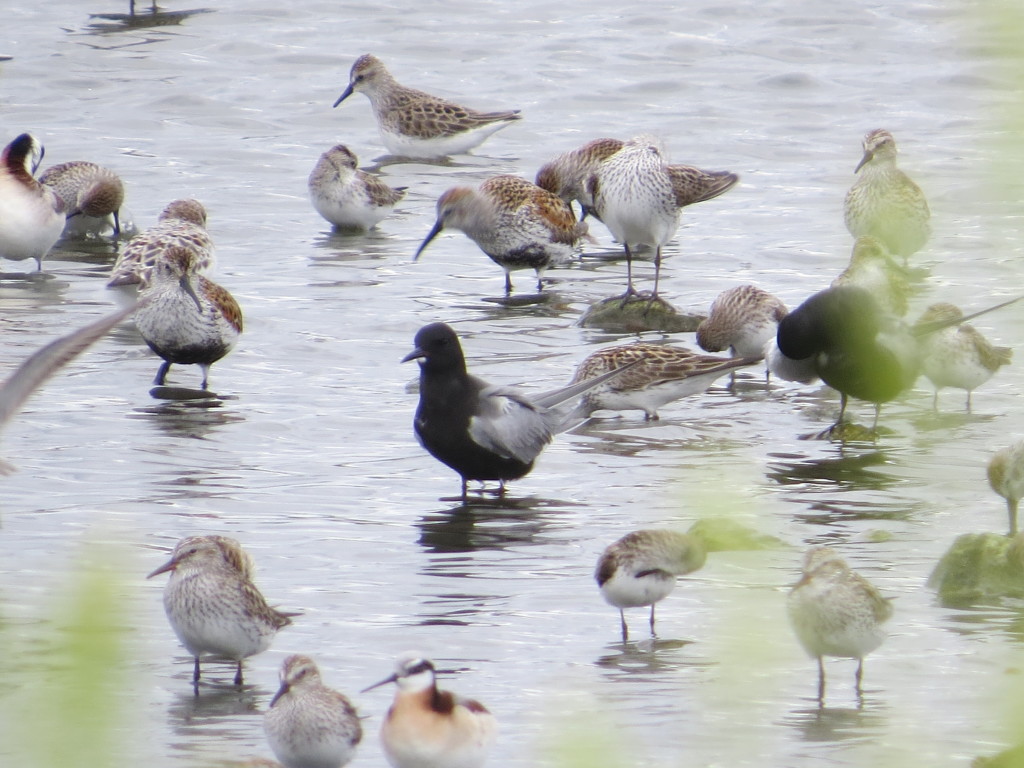 Dunlin were excessively plentiful and quite striking in full breeding plumage. 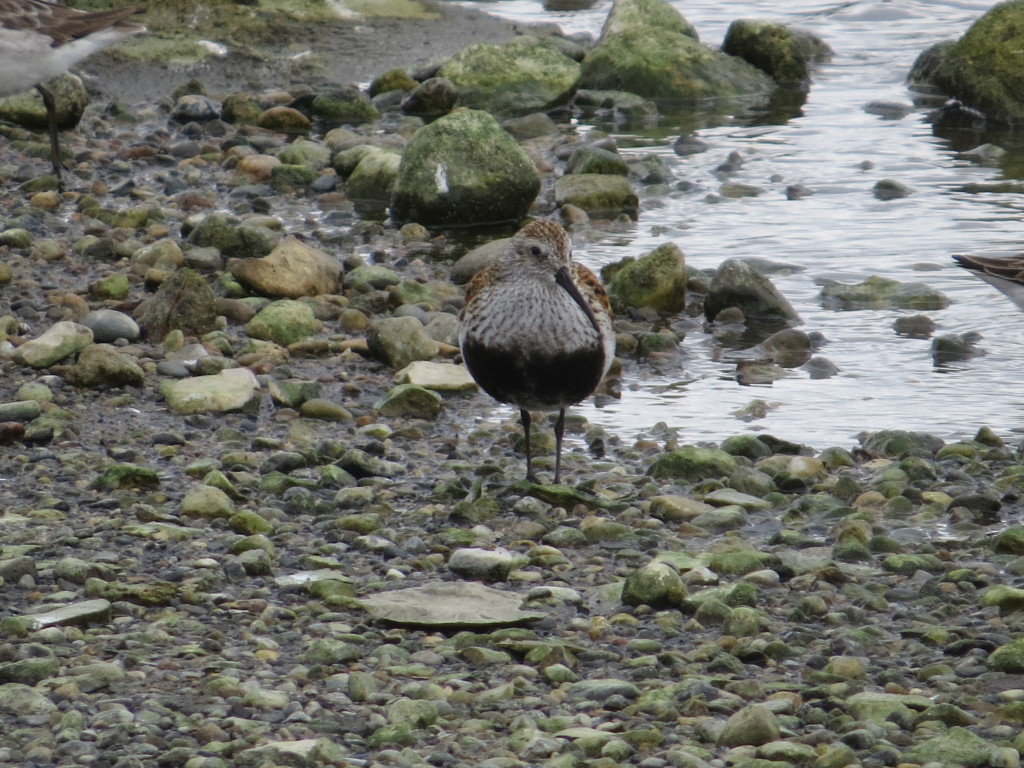 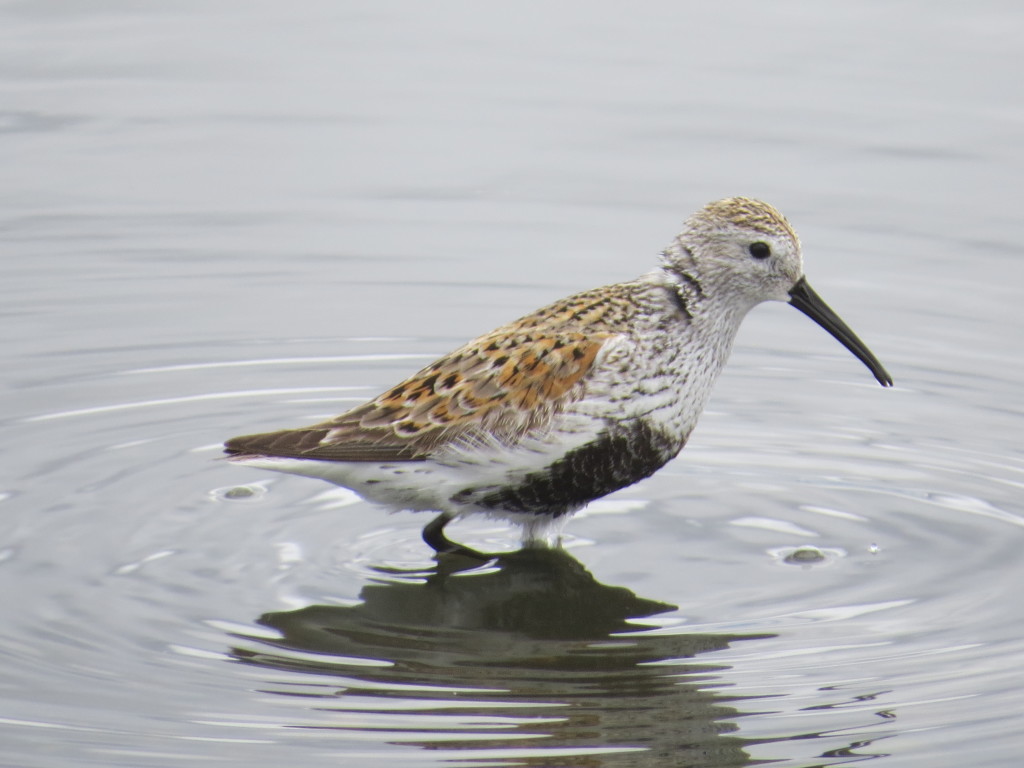 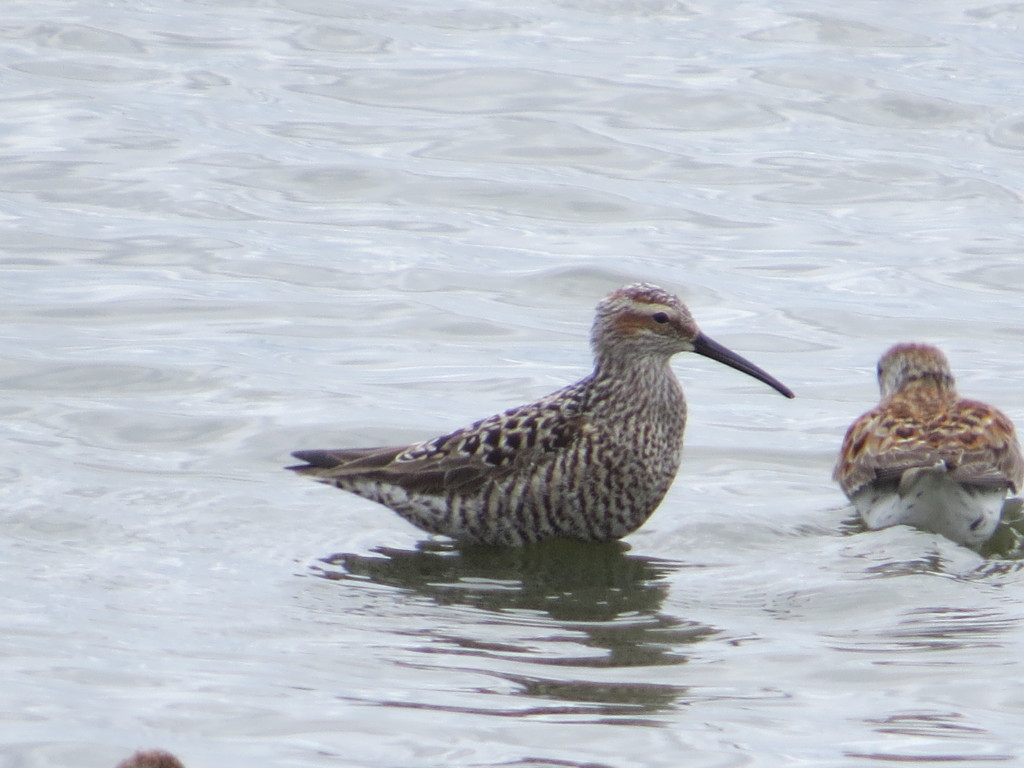 Another great addition to the shorebird mix were two Ruddy Turnstones, a crazily-patterned shorebird. 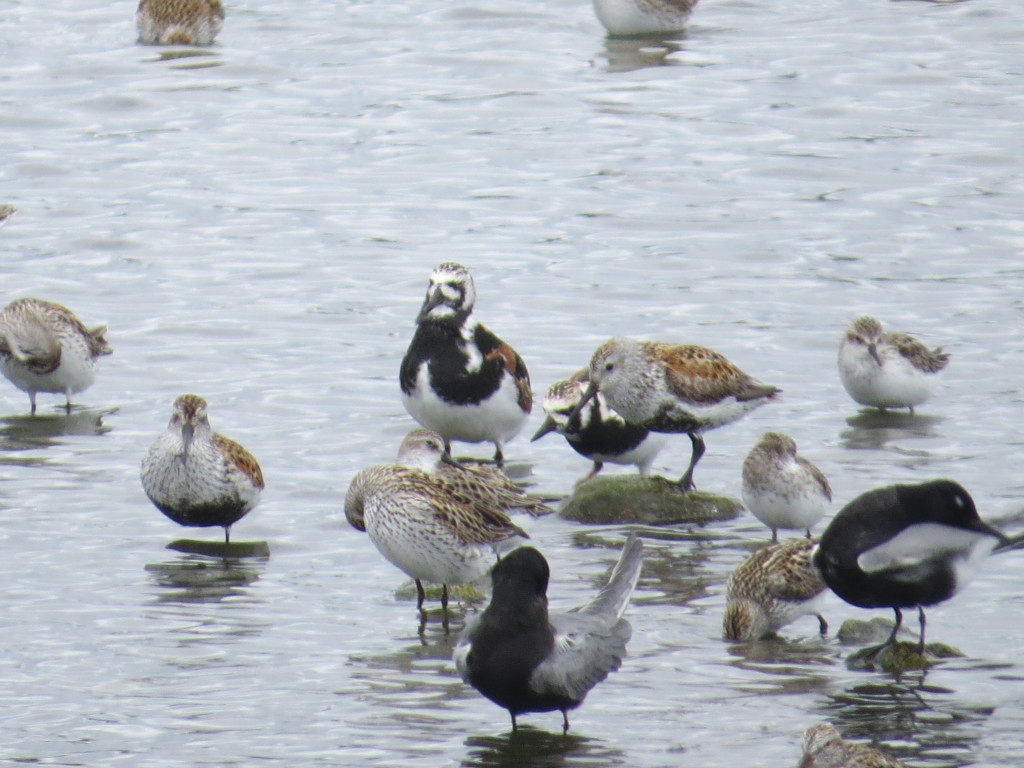 There was a lot going on with the shorebirds, both in numbers of birds and numbers of species.  Wilson’s Phalaropes and White-rumped Sandpipers can be seen in my photos, but I didn’t focus any of my photography efforts on them.  I probably could have spent hours photographing all these shorebirds, but I wanted to take another crack at that White-eyed Vireo and the day was already getting long for the non-birders.  It was time to head back to New Ulm and hit the trail one last time. 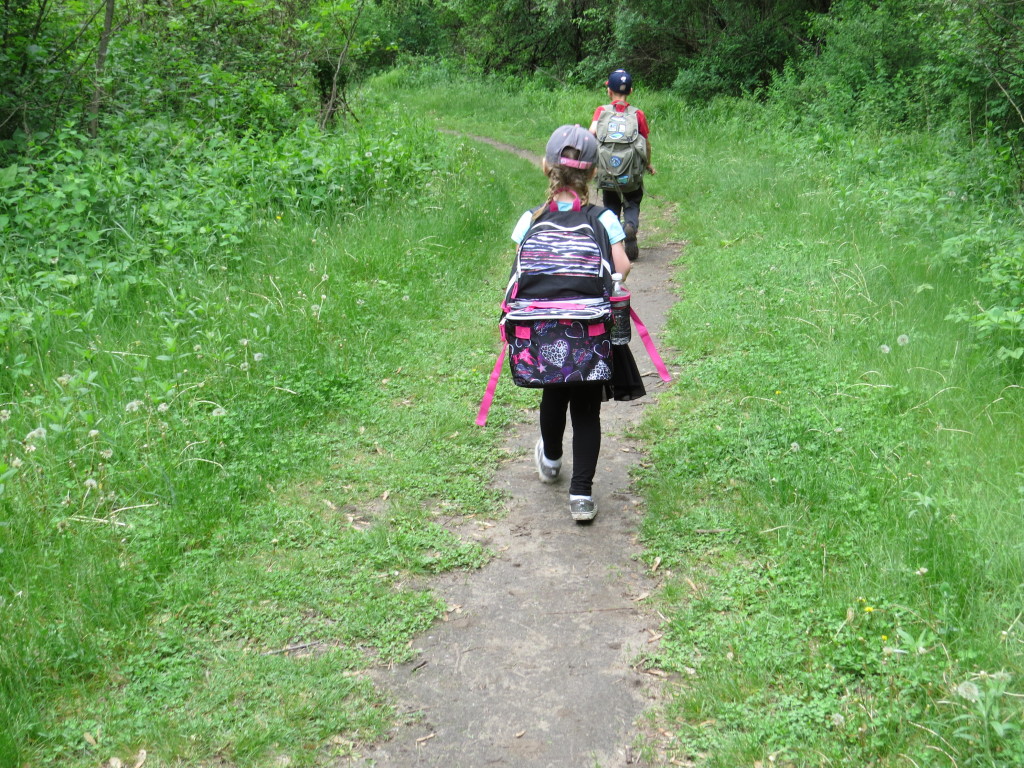 Joining us this time were Joel and Amanda Schmidt from back home.  It didn’t take the six of us long to hear the White-eyed Vireo.  Joel and I bushwhacked and tried to get on it, but we just couldn’t get a visual despite a valiant effort. I had to give up for real and make the painful decision to go ahead and count this bird as a lifer despite it being heard-only.  I normally don’t like to do that, but exceptions sometimes need to be made for vagrant visitors of the Vireo variety. Precedence has already been set with my Bell’s Vireo lifer.

As we were about to part company with Joel and Amanda, we heard the soft bee-buzzz of a Blue-winged Warbler!  I may not have been hearing things earlier after all! In no time we got some incredible looks at a Warbler I have only seen twice before. 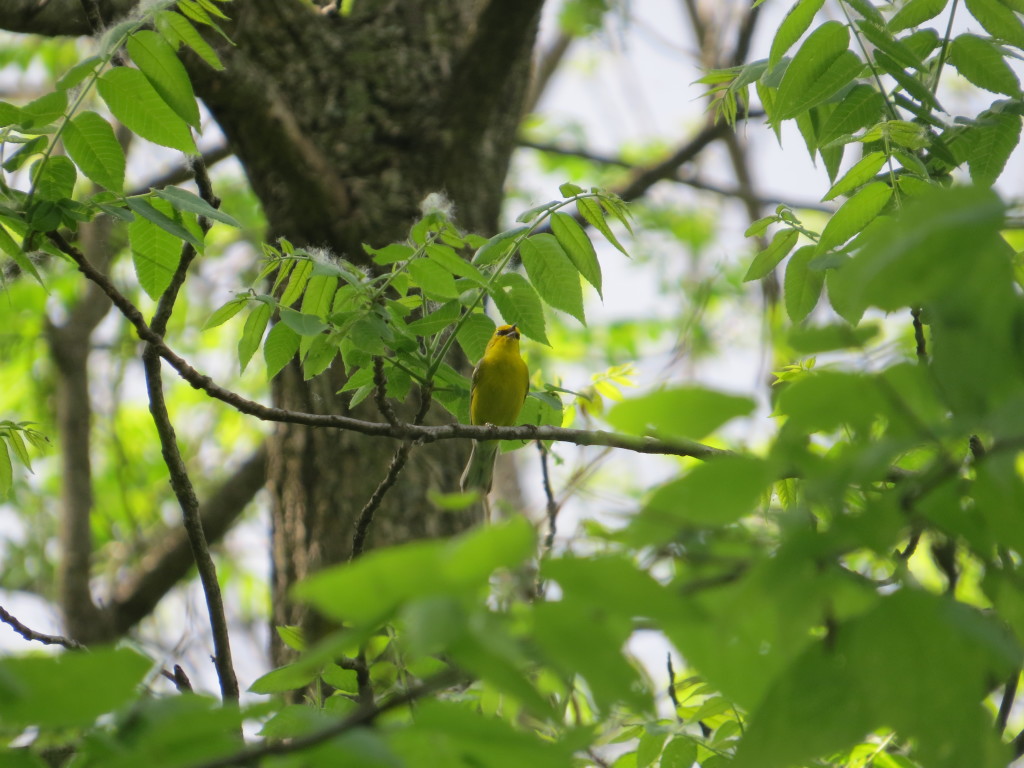 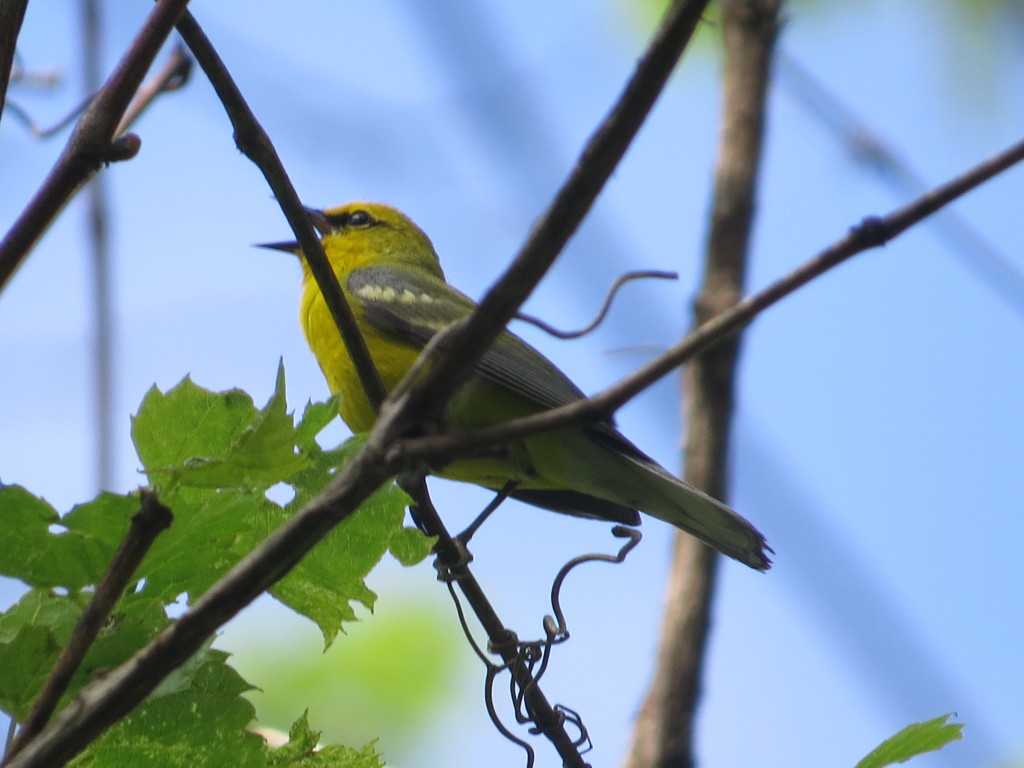 The Blue-winged Warbler was another great consolation prize in a day full of consolation goodies.  It felt good to get better photos of this species. 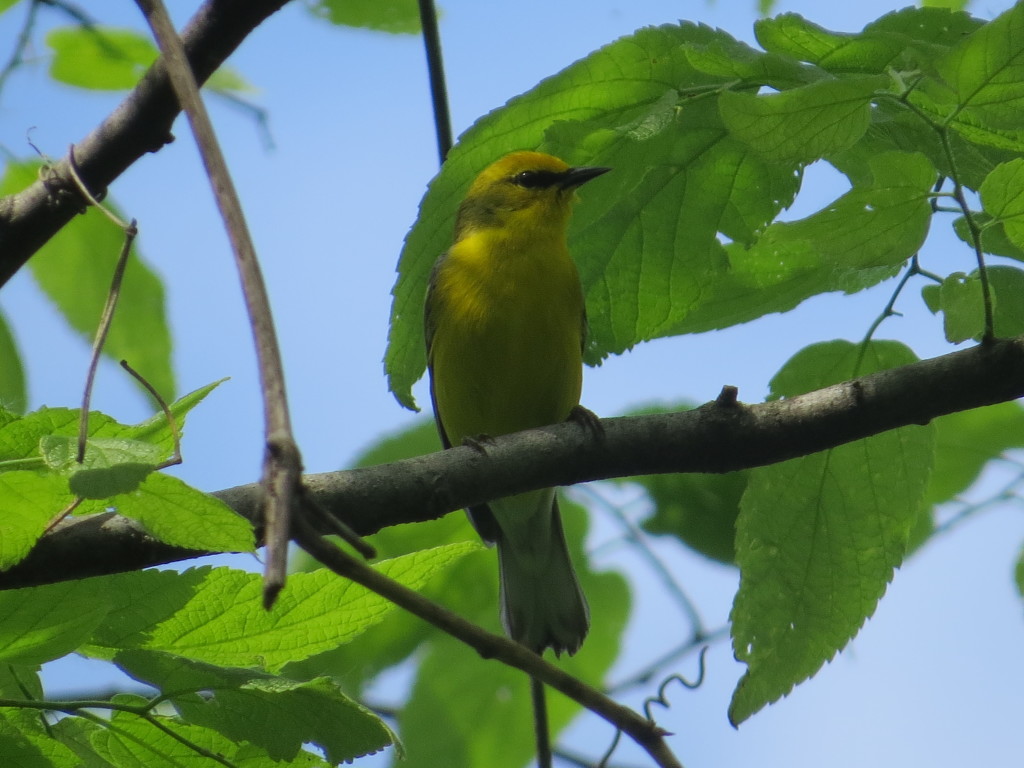 So, we went to see a White-eyed Vireo and failed in that regard.  However, this day was an unimaginable lifer and FOY grab.  Getting four lifers (WEVI, HUGO, SAND, COTE) in a day instate is unheard of at this stage in our birding.  Topping it off with some incredible shorebirds like the Avocets and Turnstones as well as the Blue-winged Warbler really made for an exciting day back on our old stomping grounds.

I’ve announced it before that there’s a lot more coming up, and even after such announcements, more incredible birding keeps happening.  Now in addition to the Colorado birds and more recent lifers near home (one being nocturnal!), wait until you see WHO we went birding with and what we helped him find!  Oh, and pretty soon we will be vacationing in Wisconsin’s Apostle Islands on the south shore of Lake Superior.  We’ll see what comes of that.  All I’ll say is that kayaks may be deployed; an endangered species may be had.

4 thoughts on “Want Some Sauerkraut With That Vireo?”