Though the SE AZ adventure took me an inordinate amount of time to write about and you multiple posts to slog through, the reality is that all of these experiences AND the adventure I’m about to lay before you all transpired in less than 48 hours time.  Intense doesn’t even begin to describe it.  Typical stories have rising action reaching a climax and then giving way to falling action.  That’s not what happened–we redefined the plot diagram. Each thrill one-upped its predecessor.  So without further adieu, here is the exciting and jaw-dropping finish to the day that began with an Elegant Trogon lifer.

After a leisurely, sight-seeing drive from Green Valley on April 1st, my family and I made it back to Maricopa around 4:00.  Since Evan, Dad, and I were going owling late that evening with Tommy DeBardeleben, the girls of the group (Melissa, Marin, Mom) decided to make it a girls night and see some princess-something-or-other movie.  Perfect.  Once back at the Maricopa house, the gender-segregated groups went to their respective destinations immediately.

I wanted to get to the Coon Bluff Recreation Site on the Salt River before dark anyhow as I was hoping to pull out a couple more lifers.  Mainly I had a gaping Phoebe-hole in my list–the Black Phoebe, which is best Phoebe of all.  As we waited for Tommy near the Coon Bluff entrance, we soaked up the last rays and views of an incredible day that began in Madera Canyon. 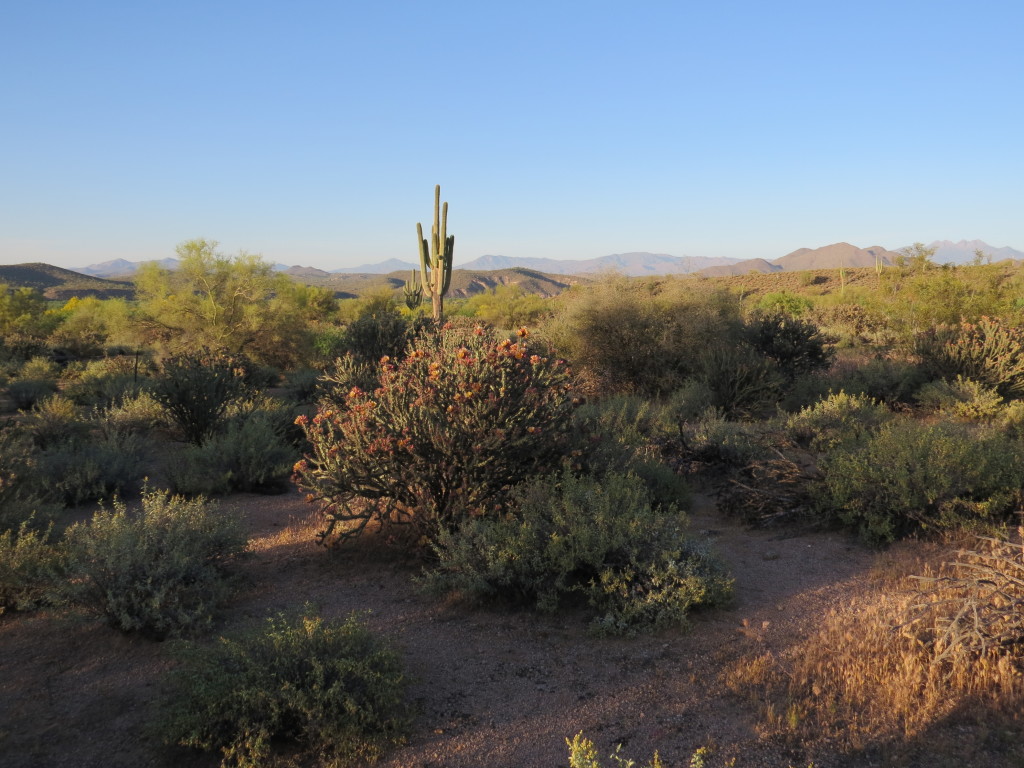 Cactus Wrens, despite sounding like a motor that won’t start, have motors that are always running as they could be constantly heard throughout the desert. 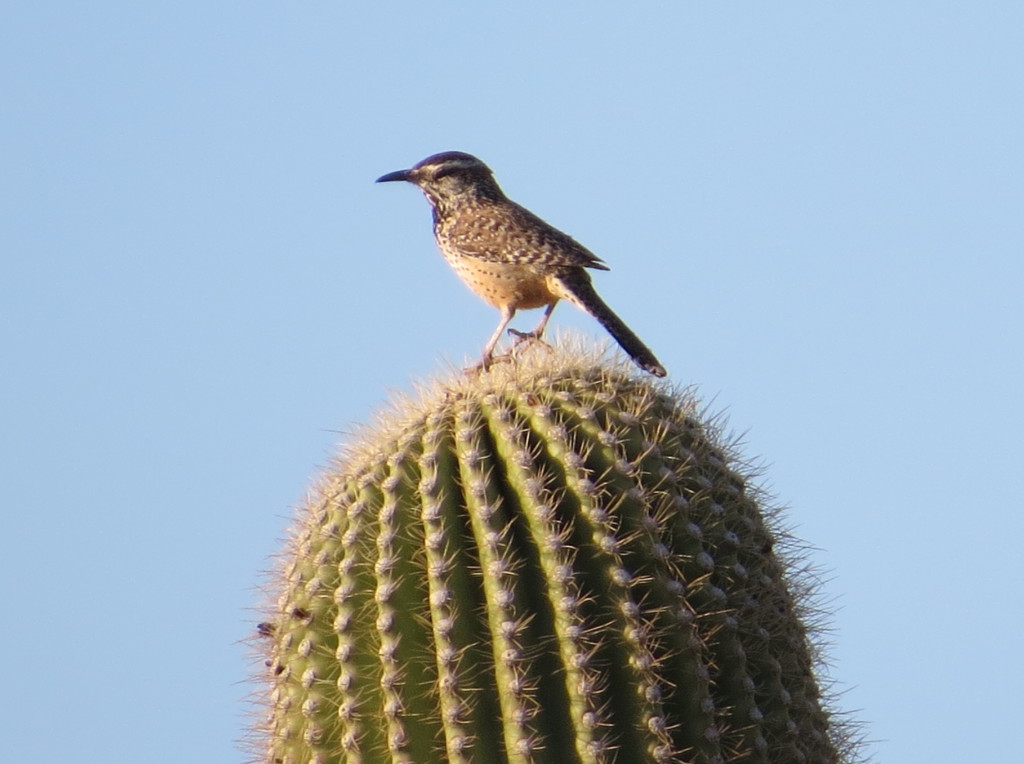 But no bird dominates the desert habitat near Coon Bluff like the Phainopepla.  Try to not see one if you go to Coon Bluff. 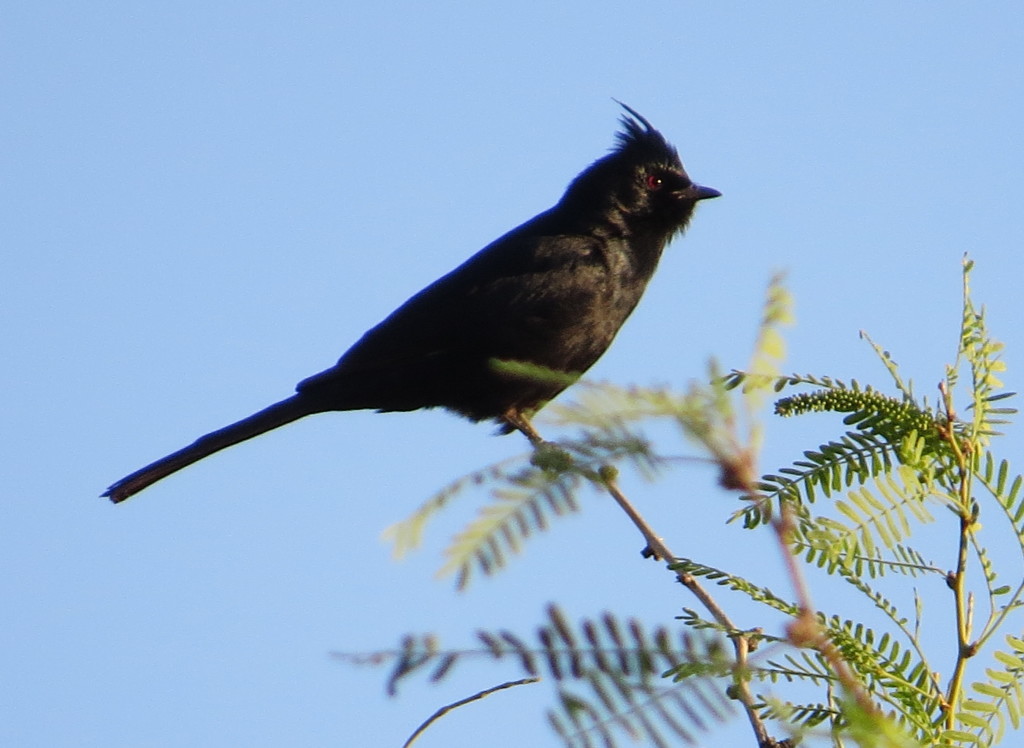 Once Tommy arrived, we all went down to the mesquite-bosque near the river to look for some of our pre-dusk targets. 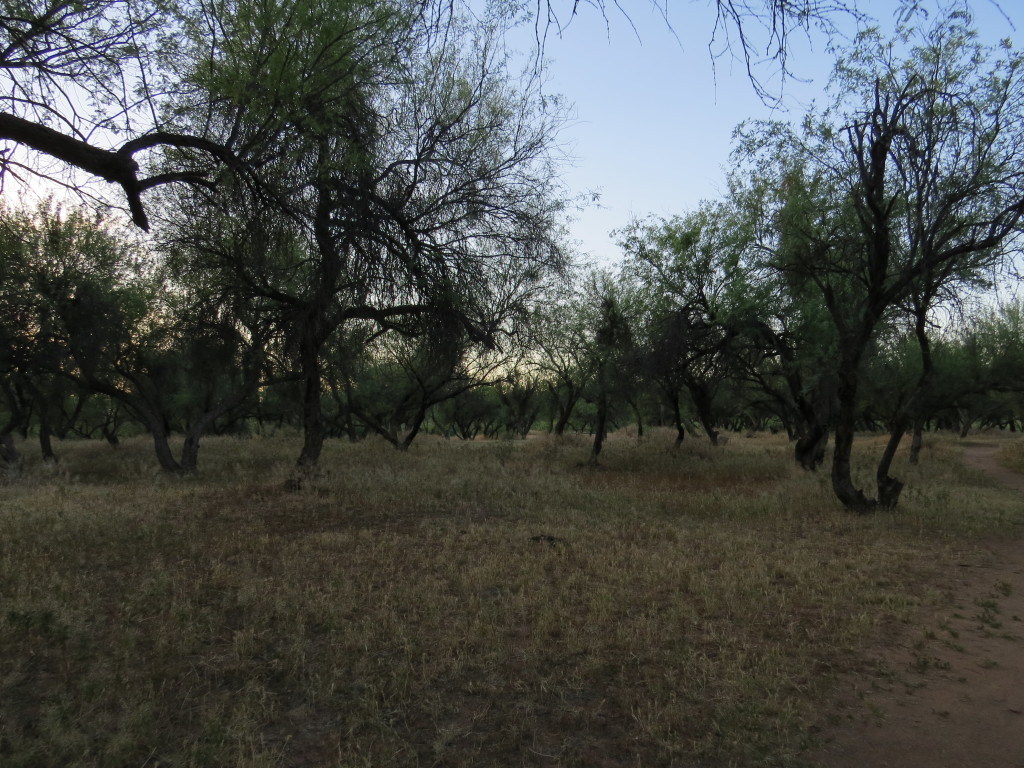 Right away we saw some Vermilion Flycatchers and encountered two Ladder-backed Woodpeckers.  The Ladder-backed was a lifer for Evan.  The Woodpeckers of Arizona were generally an unfriendly lot to us, snubbing photo attempts and giving poor looks in general. 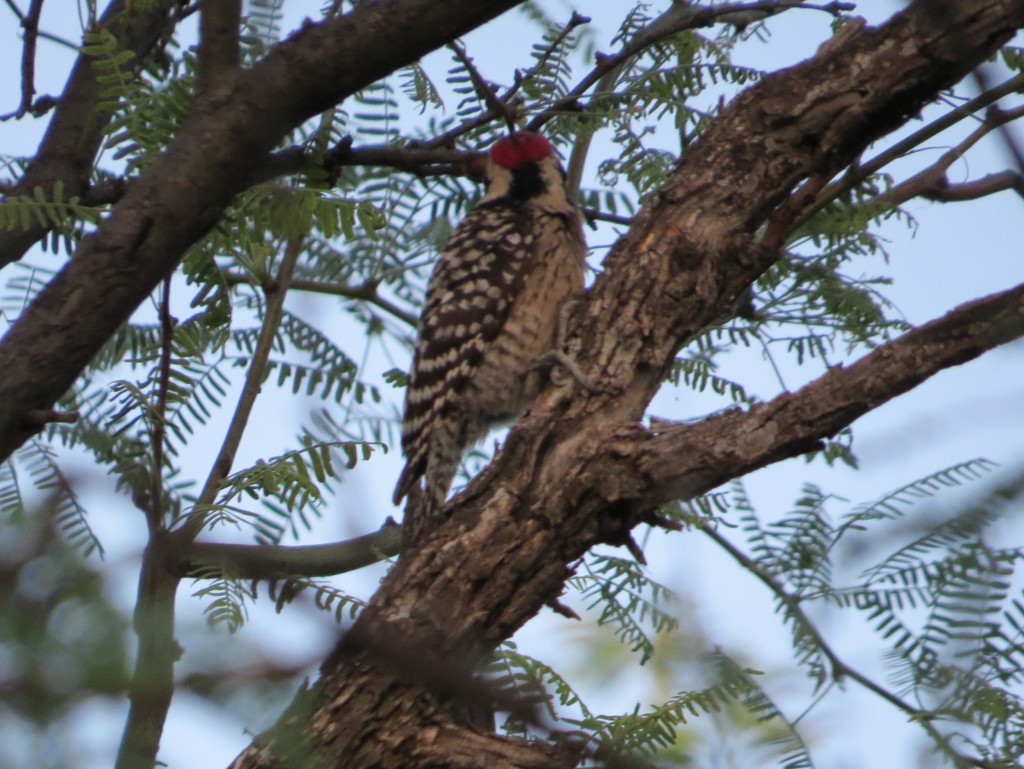 Once we got next to the Salt River itself, Tommy found us a couple of our Black Phoebe targets.  The tail-bobbing and water’s-edge perching behavior was gratifyingly reminiscent of our lone Phoebe species back East. 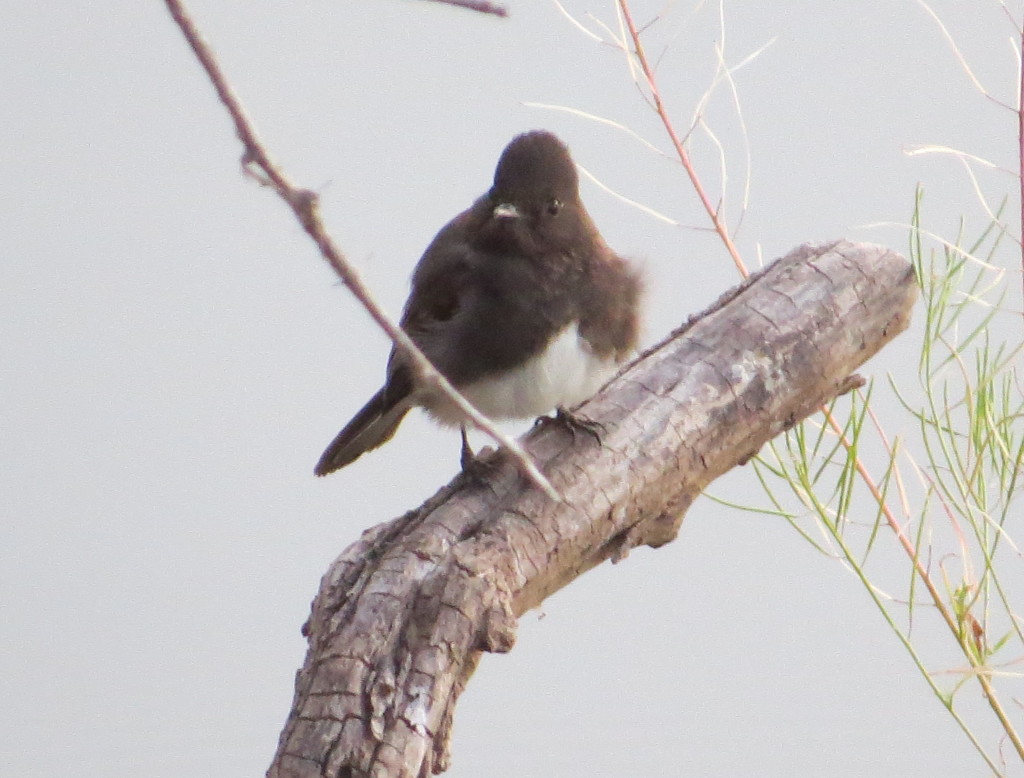 Shortly after this, Tommy found Evan a Lucy’s Warbler lifer. 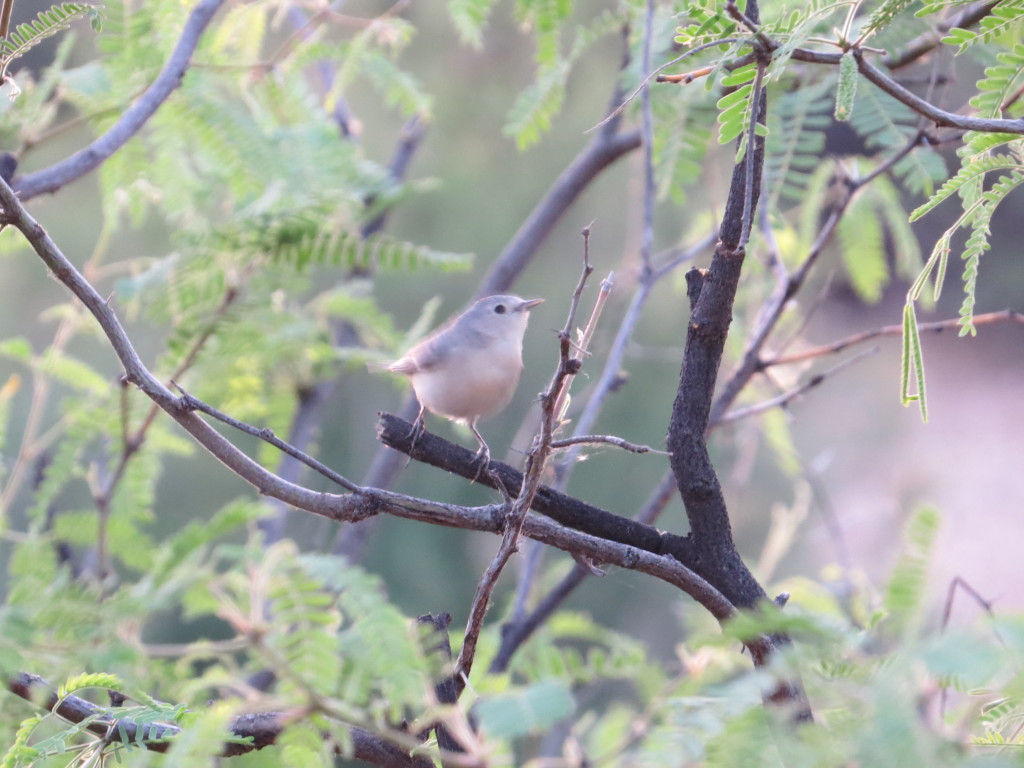 But after that tidy-lifering, it was time to head out to the entrance road and wait for darkness to fall. 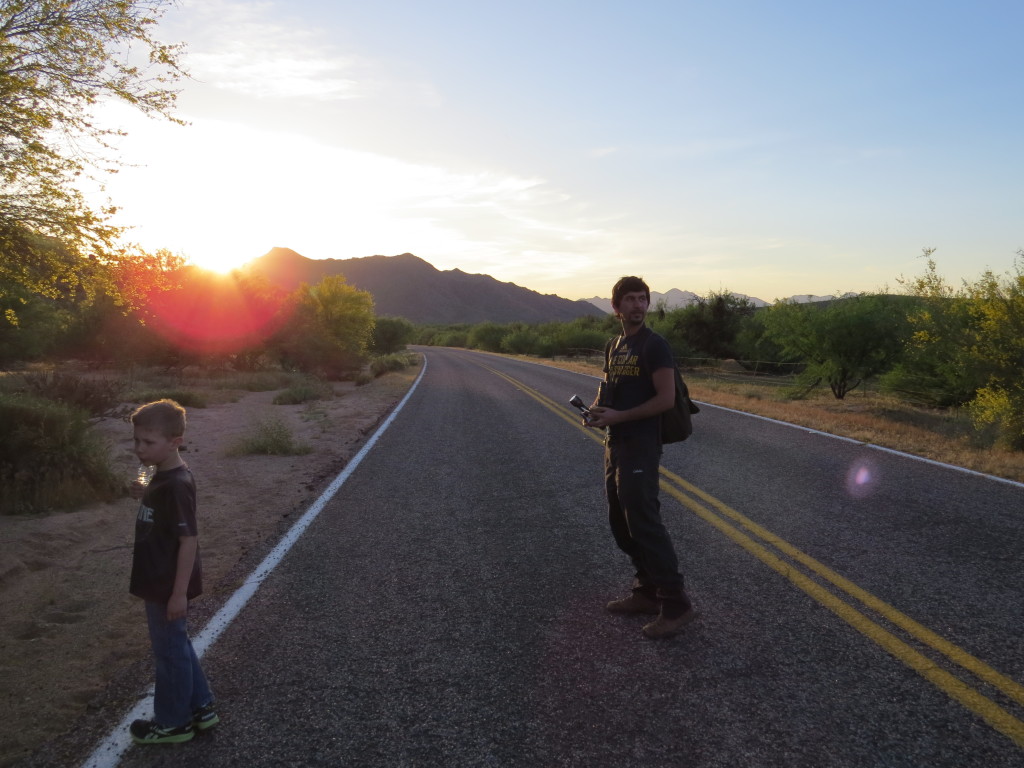 Darkness and owl hoots weren’t the only thing we were waiting for–bird blogger Laurence Butler of the famed Butler’s Birds was set to join us for some nighttime owl escapades.  Whenever a herd of bird nerds gathers, especially of the blogging variety, there is bound to be magic.  Tonight was no exception.  In fact, once we were all together and started walking the road pictured above in the twilight, Laurence got the night off to the right start by spotting a Great Horned Owl atop a Saguaro. 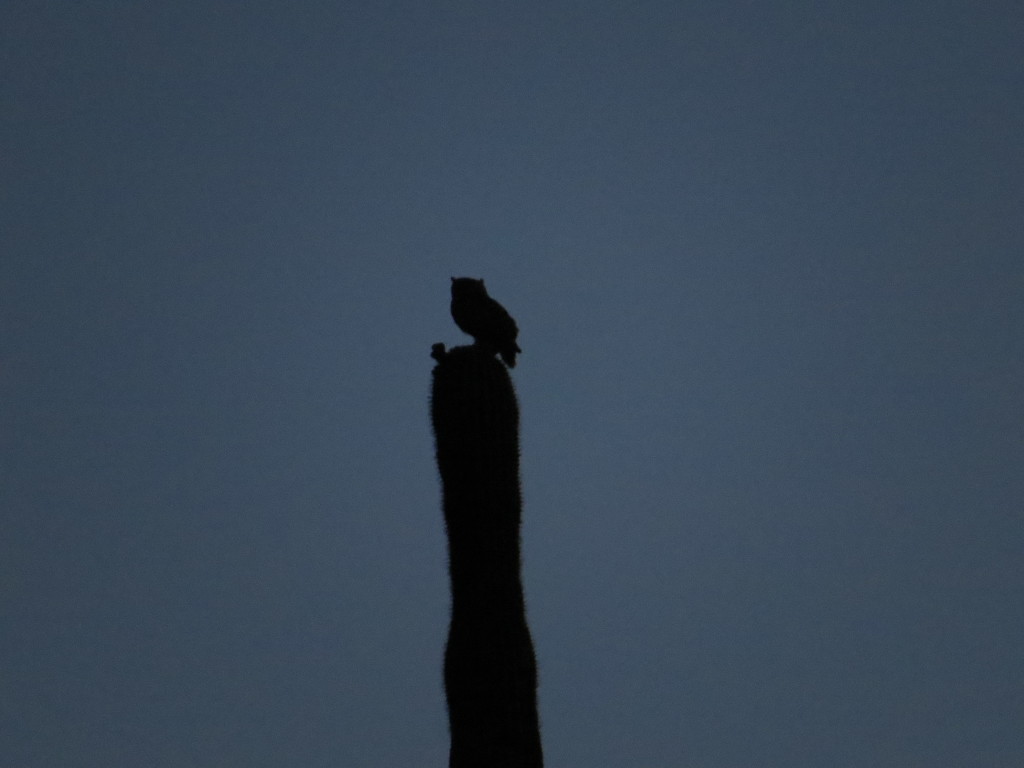 As we walked along, the nighttime sounds were immediate, omnipresent, and subtle to the untrained owler {me}.  Common Poorwills could be heard, and one gave us our life look as it buzzed our heads.  Western Screech-Owls proved to be a frustrating lot as we would hear one and head in its direction only to have it mock us by suddenly shutting up.  We’d give up and walk away and later hear it back in the same location.  This scene replayed many times with different Western Screech-Owls.

Giving up on WESO, Tommy was now hunting Elf Owls.  It didn’t take him long to hear one of the tiny guys barking.  The hunt was on.  Tommy had the Elf confined to a large mesquite tree.  Flashlights were immediately bathing the tree from all directions.  Then, Tommy called out that he spotted it! As I was heading toward him, Laurence called out that he too had it from the other side with an unobstructed view!  So I headed over to Laurence.  Nice guy that he is, he waited to take his own pictures and held up the light so I could get my life look and photograph of the Elf Owl.  Too bad I was a nighttime-owling novice and blew this gift by not using flash!  I distinctly remember watching the yellow blur of the eyes through the viewfinder as it swiveled its head at the last second.  And then it flushed further into the tree disappearing altogether. 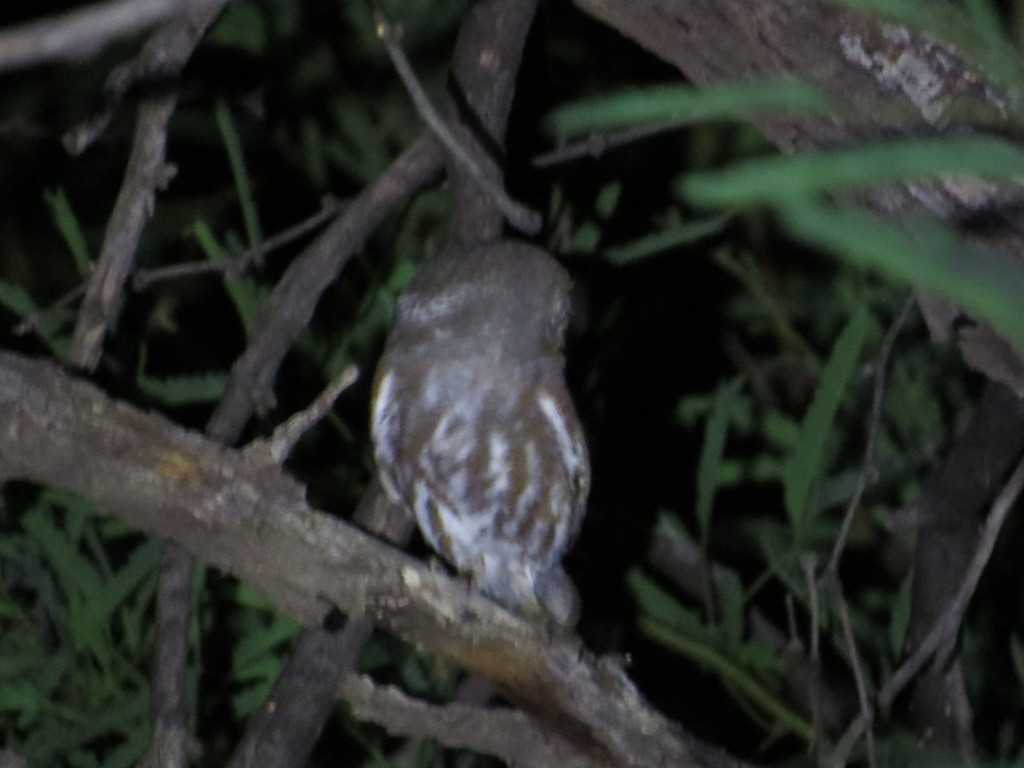 So now the hunt was on again for the 6 in. owl in the large tree.  I may have thrown away an incredible photographic opportunity, but I somewhat made up for it by making my only contribution to the owl efforts that night as I refound the sparrow-sized Elf buried deep in the branches. 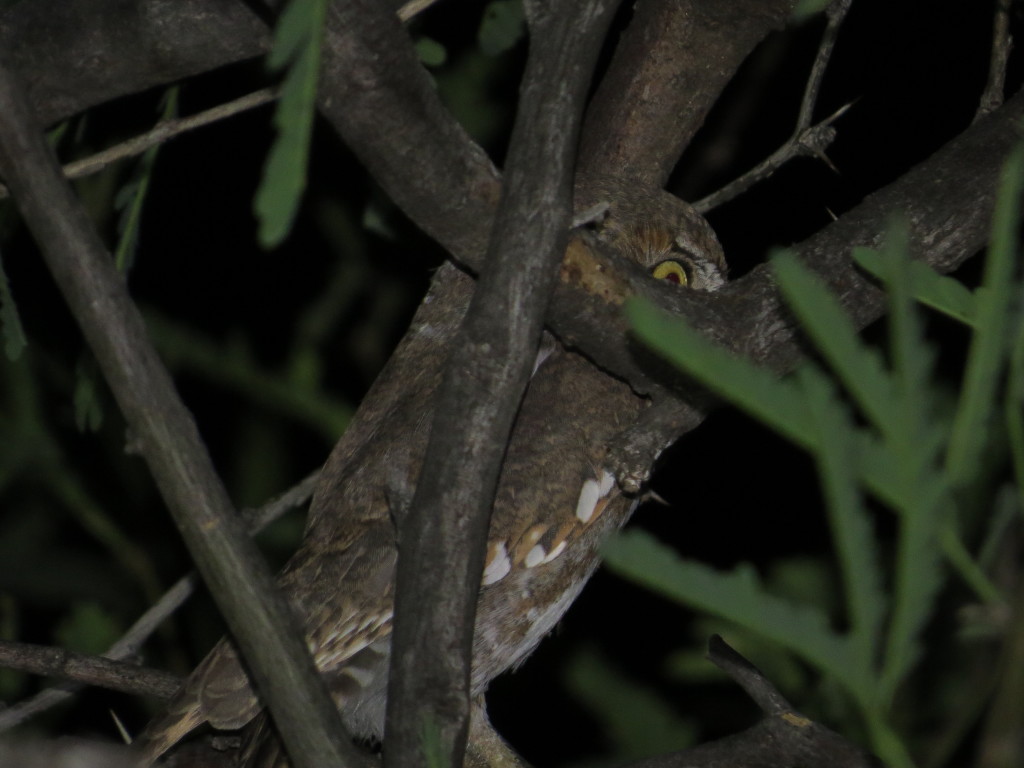 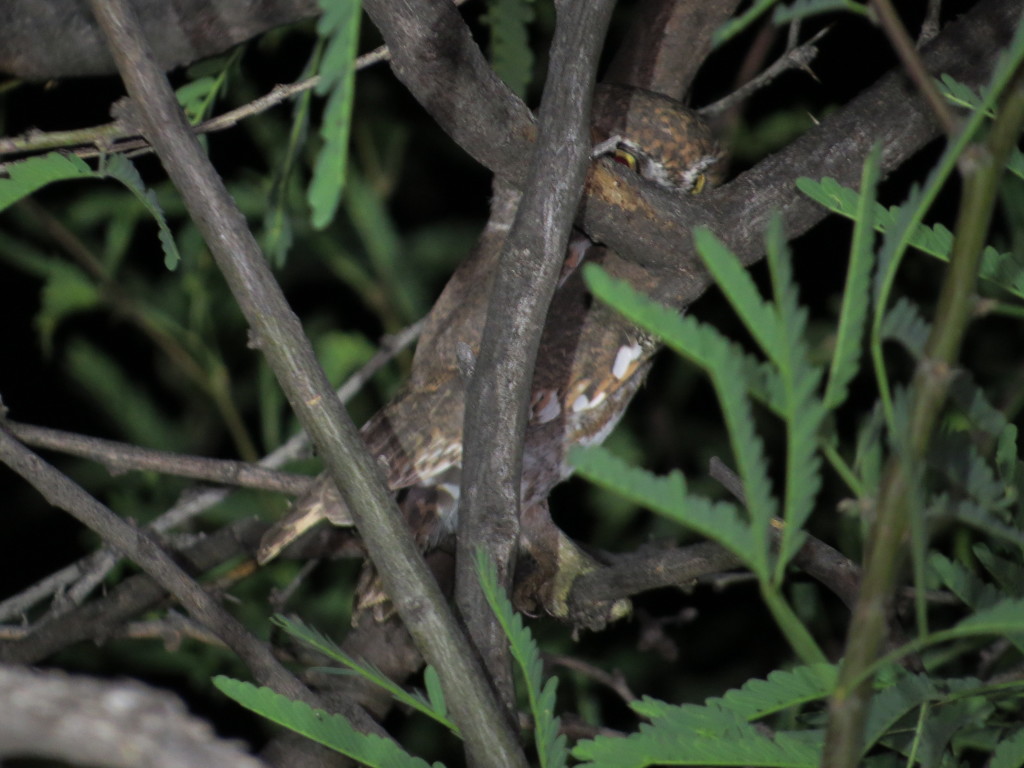 This Elf Owl never did give us any more good lucks, though Laurence found and crushed a second bird in a different location.  At least Evan was with him and got good looks at that bird.  With crush in hand, the punctual Laurence departed from us at his preordained time.  This decision was both foolish and sacrificial, for whenever one leaves a birding party prematurely, it all but guarantees that greatness will happen for those who persevere.  And indeed, that is exactly what happened.

Dad and Evan decided to rest back at the van in the parking lot while Tommy and I were going to take one more crack at the owls.  With just the two of us, we could haul and cover a lot of ground quickly.  It turns out that covering lots of ground was not necessary since we once again had a calling Western Screech-Owl.  We set after it immediately.  The sound was subtle and quiet to me, so I was baffled when Tommy said it was really close.  I thought for sure it was a long way off.  However, we heard it in front of us, walked a short distance, and then heard it behind us!  We now had the Screech confined to one tree!  We shined our lights on the tree and in seconds Tommy hollered, “Josh! I got it!”

There, there on a branch in the middle of the tree with nothing blocking our view was the amazing Western Screech-Owl!  It was stunning. 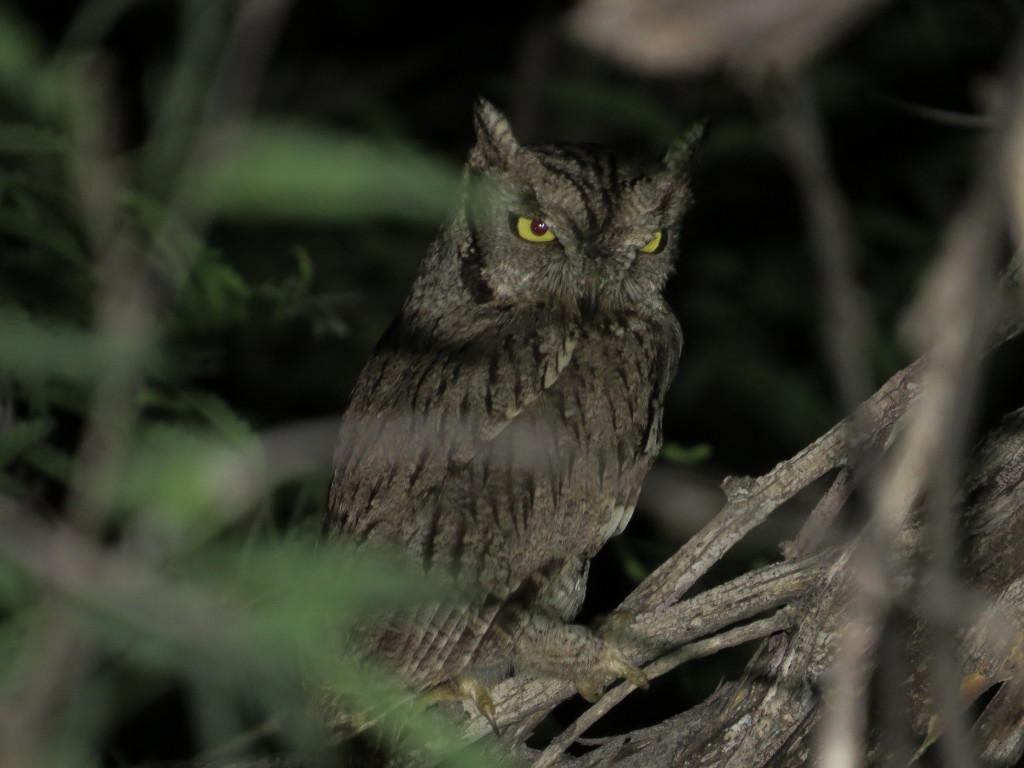 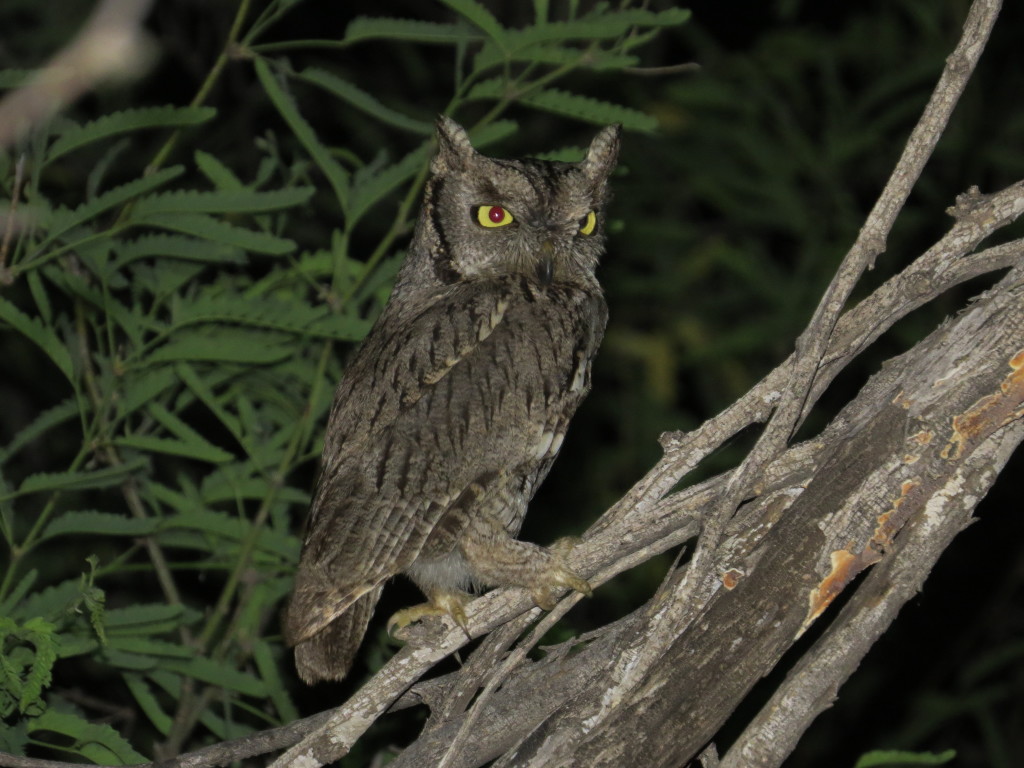 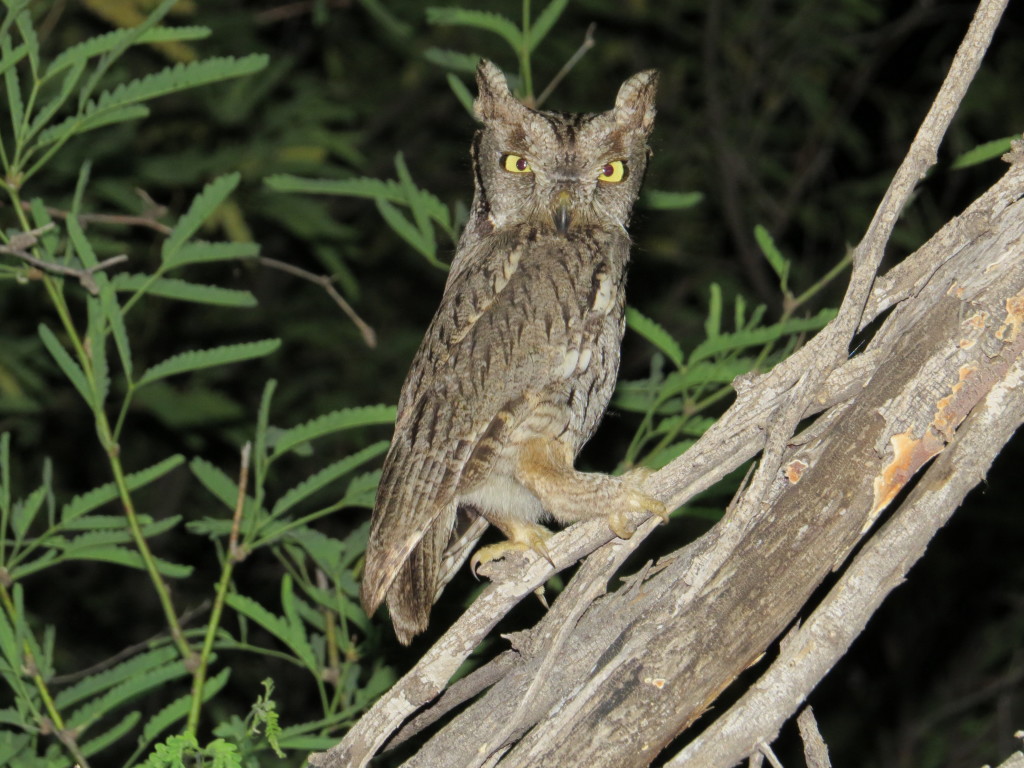 After we each got several nice photographs, it dawned on me that this Owl was very content.  So I left Tommy to go back and get Dad and Evan so they could see this cool bird too.  Though in my excitement and in the darkness, I ran up to the wrong van.  Thankful to not be shot by the camping inhabitants or see the goings-on behind the blanket curtain that hung from the open lift-gate, I collected myself enough to find the correct van.  After startling my dad awake and hopping in, we punched it to get back to Tommy.

I needn’t have hurried because the Screech was exactly as I left him, and Evan and Dad got great looks at their lifer too.  Then, inspired by Tommy, the only birder I’ve heard of taking selfies with birds, hilarity ensued as we each found ourselves posing with the Owl.  Intoxicated with some good owling luck as well the thrill that comes from good, clean fun selfie antics, we could not stop laughing. 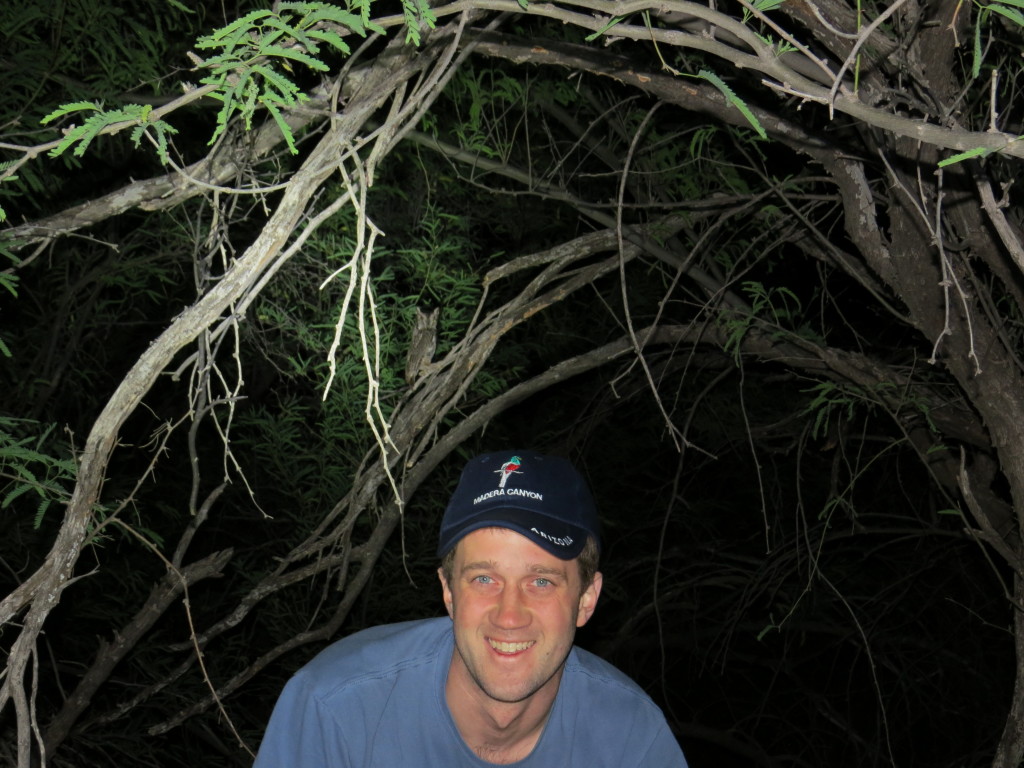 Obviously, Tommy is much more experienced at this, and therefore much better at the bird selfies than I.  One thing I have learned from Tommy is the importance of having fun while doing this hobby.  It is clear that I still have much to learn this owl Jedi. 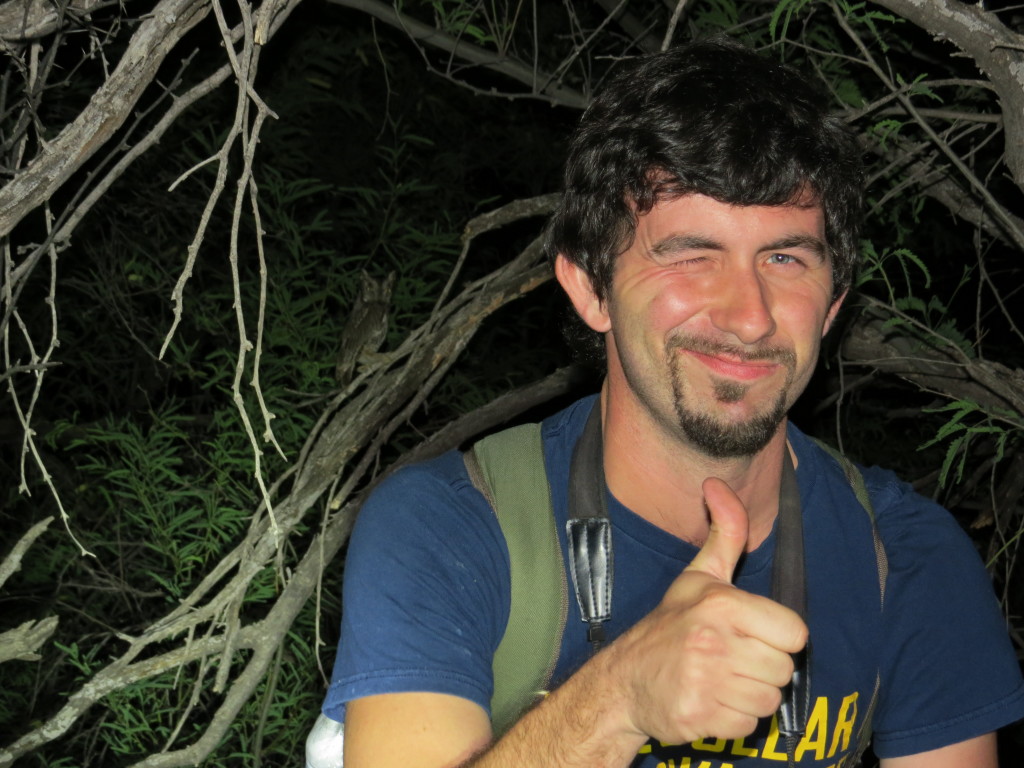 By this point we had completely lost our minds and were attempting the GREATEST OWL SELFIE OF ALL TIME–both of us posing together directly underneath the bird.  Maybe it was the giggles, maybe it was that we didn’t have a mint, or maybe it was that the owl was just fed up with the freak show because it left just as we were almost in position.  Oh well. It was still the coolest and most hilarious owling I’ve ever experienced.  And I’ve owled a LOT.

Finally it was time to go.  We said our goodbyes to Tommy until we have a frosty reunion Up North next winter.  Then we headed back to my parents’ place in Maricopa for a much-needed night of sleep after an Elegant Trogon lifer at dawn and wild Western-Screech party well after dusk. 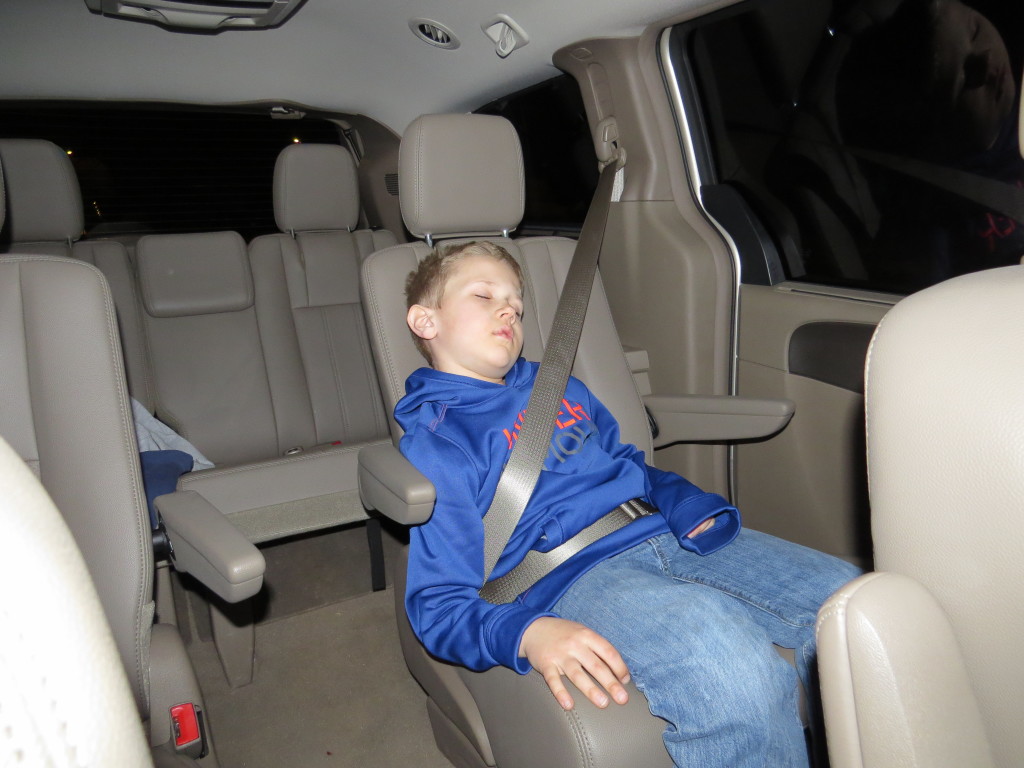 I long to return to the desert for more nightime owling.  Next time, though, I’ll be prepared with a better flashlight, a well-rehearsed selfie pose, and my leather boots… 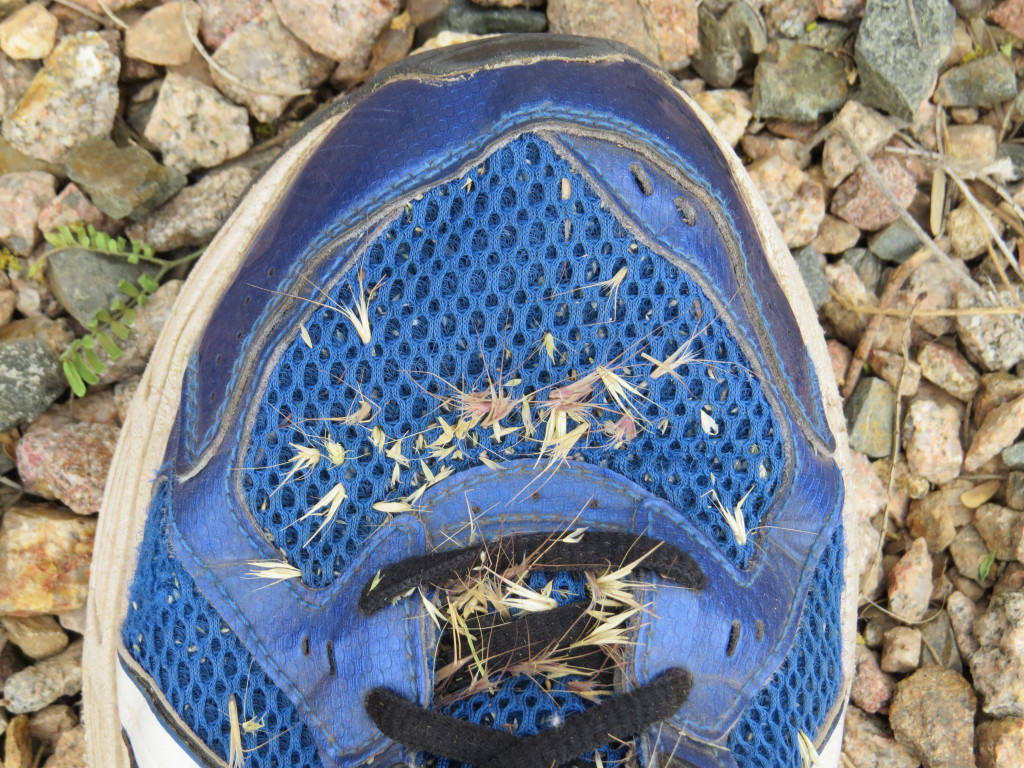 It was an unforgettable night with Evan, Dad, Laurence, and Tommy.   We padded the life list with a few more birds which pushed Evan up and over the big 300.  More importantly we had a lot of fun doing it.  Oh, and if you’re feeling sorry for Laurence for missing the big party at the end, don’t.  Our WESO shots gnawed at him enough to get him back out there for a second and very successful photo shoot.

14 thoughts on “Arizona 2015: NIGHT Owling at the Coon Bluff Recreation Site on the Salt River”