SE AZ — Truly, no other group of four letters can elicit as much excitement from a birder. On March 31st, I had made arrangements to head that direction with Tommy DeBardeleben, a.k.a. eBird King of Maricopa County (greater Phoenix area), and Gordon Karre in search of my two main Arizona targets this year, the Painted Redstart and Elegant Trogon.  The plan was to spend two half-days hitting up Mt. Lemmon, Florida Canyon, and Madera Canyon with an overnight stay in the Green Valley area.   The next day would provide extra time for searching for these targets if needed. Tommy and Gordon would camp out at Madera Canyon while my family would venture south to join me at a hotel in Green Valley.

Originally Evan was going to go with me on part one of this two-day adventure, but at the last minute he bailed on me.  I think he realized it would be a long day and that Grandma and Grandpa’s house is more fun.  Fair enough.  Meanwhile I hopped into a car with Gordon and Tommy at 4:30 AM sharp.  Melissa couldn’t believe I was going off with complete strangers; apparently she doesn’t fully understand the eccentric, but super-friendly and non-axe-murdering birding community.

Outside, the drive down to Tucson was dark, but inside it was enlightening as I got to know these two birders a little better and chat about all things bird-related. Eventually daylight began to break as we hit Tucson and began the ascent up Mt. Lemmon just northeast of town.  We would be going after the high-elevation warblers, namely the Painted Redstart, before heading further southeast to begin the Trogon hunt. The scenery was amazing as we wound our way up the mountain where Saguaro-studded southerly slopes gave way to Ponderosa Pine Forests on the northerly slopes. 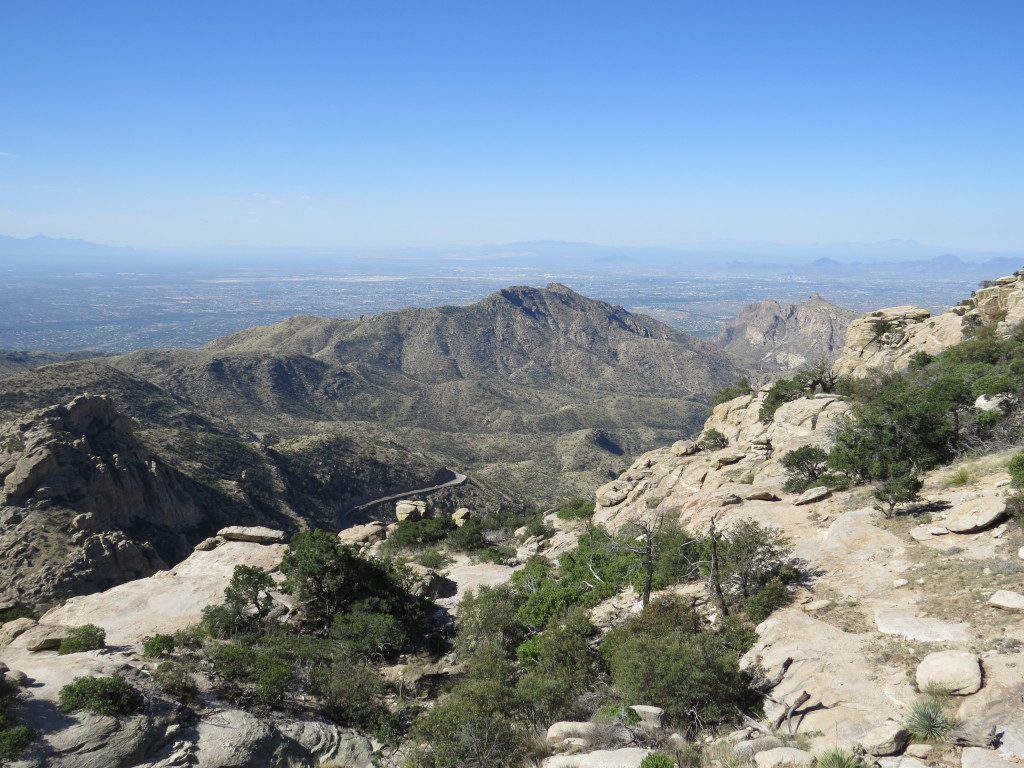 Looking SW from Mt. Lemmon; Tucson is the flat area below.

As evidence of how beautiful this area is, even these Arizonans expressed their enthusiasm for the scenery they’ve seen many times before.  A collective sigh was expressed, though, when we passed the location of an ABA Code-4 Slate-throated Redstart that was seen just a week earlier but not by this car’s occupants.

Our first stop was a picnic wayside rest at Cypress.  Stepping out into the chilly air was a refreshing change from the 90s we’d experienced the day before in Maricopa. The habitat shift from desert to pine forests was also a welcome change.  The lifering started as soon as I could get my sweatshirt on. The first was a Yellow-eyed Junco.   It’s so cool how a change in iris color can make a Junco not so junky, but actually quite an attractive bird. 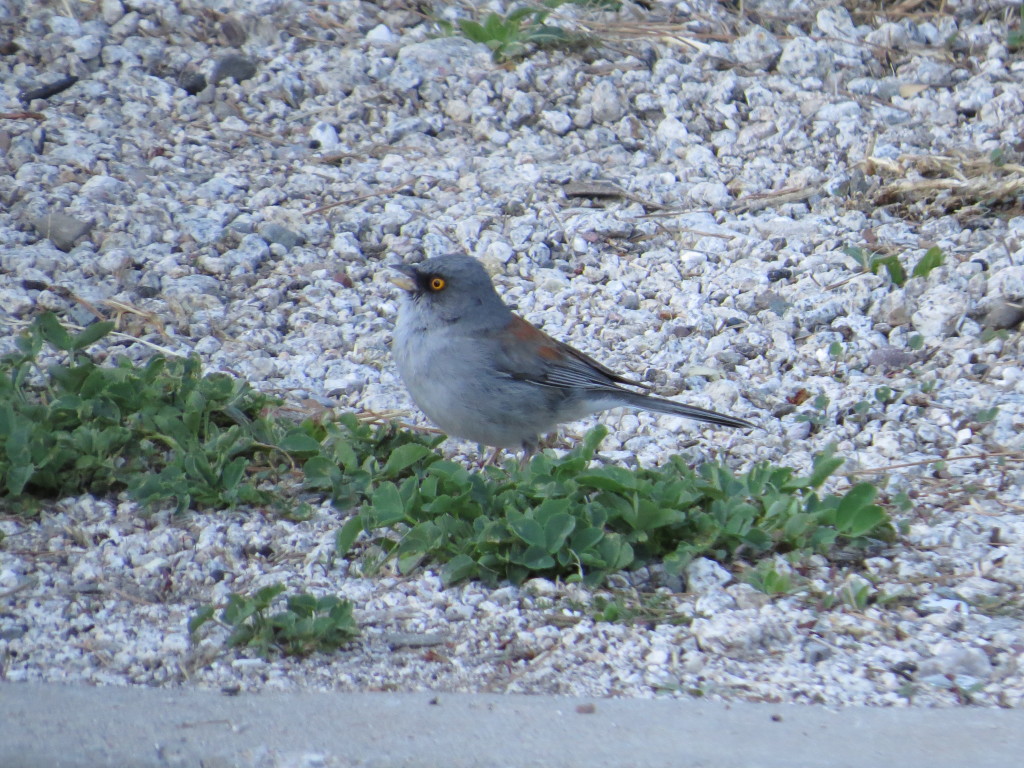 Then Tommy announced what I’d been dreaming of for months: “Hey, Josh, I hear your Redstart.”  Gordon and Tommy knew the Painted Redstart would be easy, but I never expected it to be this easy.  In a short time I got my life look in the early morning light at the most striking warbler there is. It did not fail to wow me. 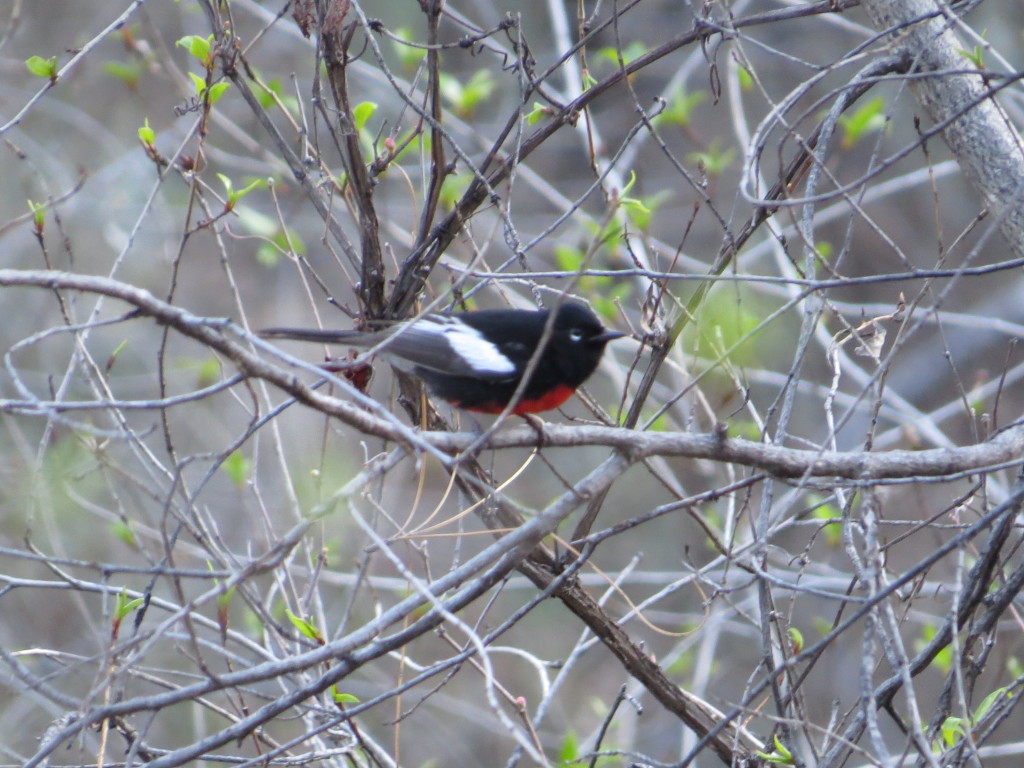 In my naivete’ I thought this was one my chance at a Painted Redstart and therefore wanted to stay on it until I could get satisfactory photos.  But Tommy and Gordon had my best birding interests at heart along with the knowledge that this would not be the last Painted Redstart of the day, so they said it was time to move on to higher ground.  Before we could make it back to the car, we had two more lifers–uncooperative, tree-top dwelling Pygmy Nuthatches and an equally stubborn Acorn Woodpecker. 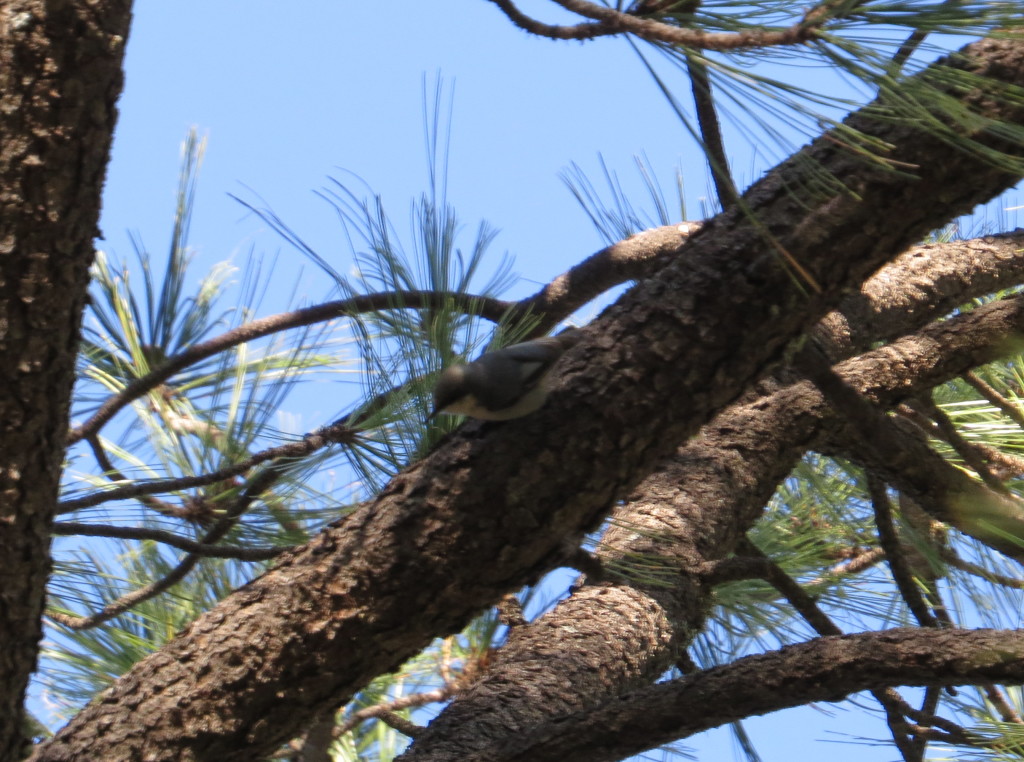 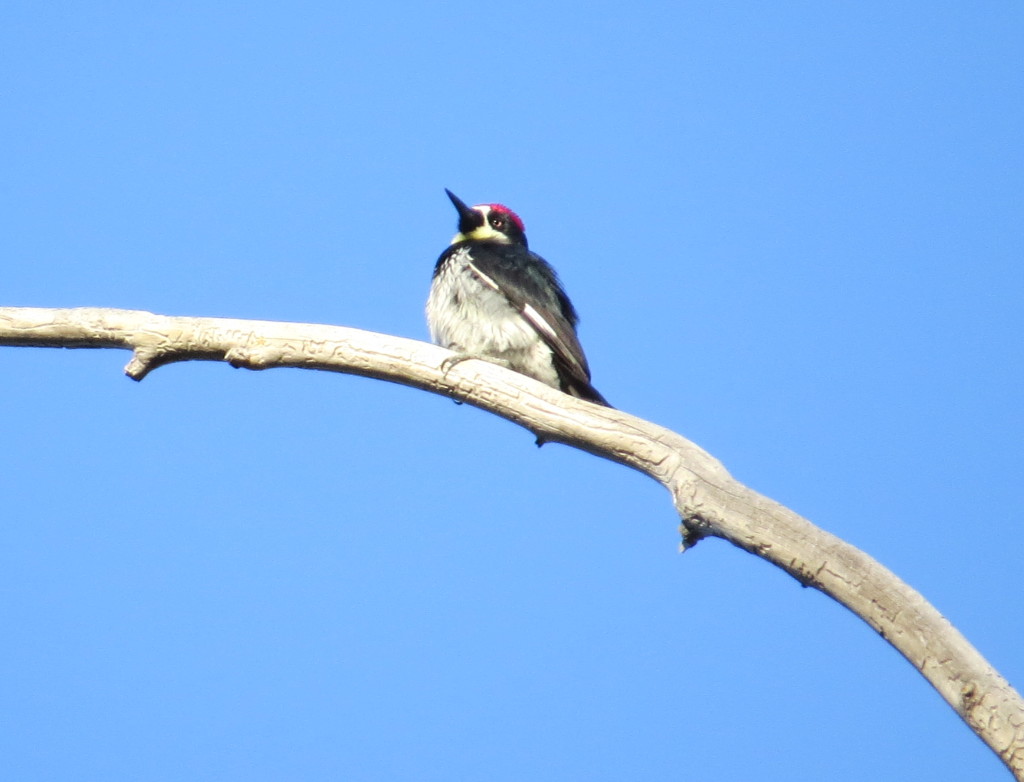 We got to enjoy the sights and sounds of a Spotted Towhee who was calling voraciously at Cypress before we went further up the mountain to Rose Canyon.  The lifering again started immediately at Rose Canyon as a calling Hutton’s Vireo was announcing his presence. 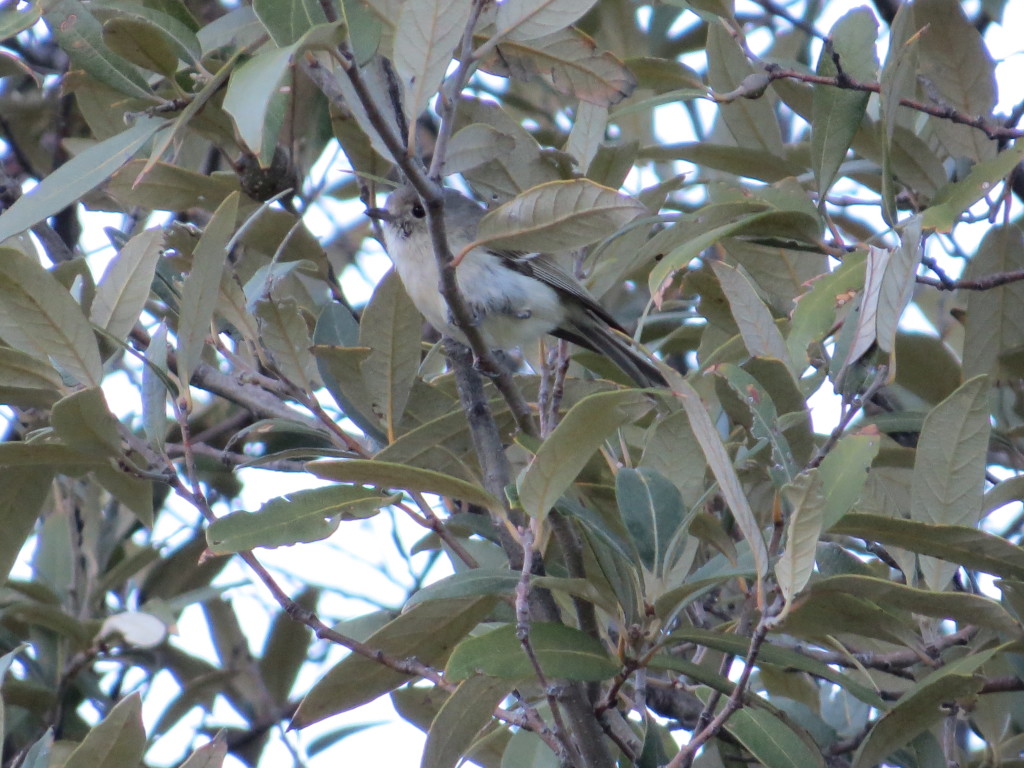 Tommy was real quiet now, taking in all the sounds.  He only shared a tiny fraction of what he was hearing, but the ones he did announce were exciting–Stellar’s Jay, Greater Pewee, and the one that really got me revved up–Olive Warbler! Ever since I saw this bird on Laurence Butler’s blog last year at this time, I have dreamed of seeing this bird too.  This was really target #3 for the trip.  Pretty soon we tracked down this Warbler that is technically not even a warbler as it’s in its own bird family.  That doesn’t matter to me.  It’s a pretty sweet bird and not so common either. We found a group of three with a nice, bright male. 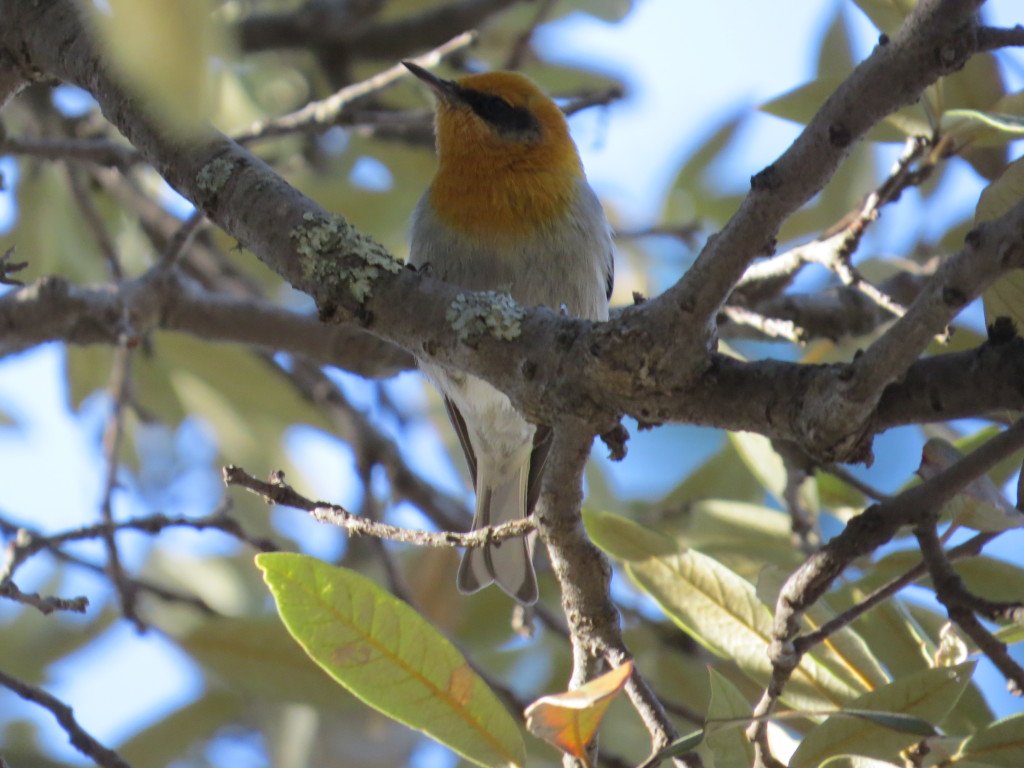 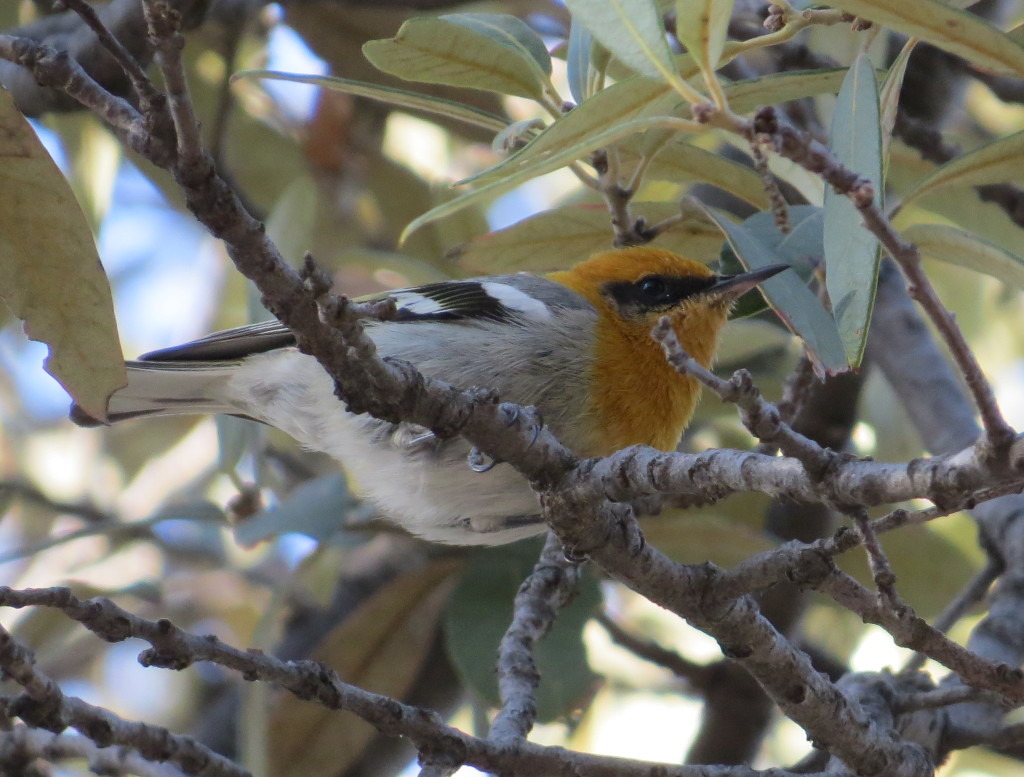 One bird that really fired up Tommy and Gordon was a calling Buff-breasted Flycatcher.  I honestly hadn’t read up on the bird, but these guys were telling me what a good find this was especially this far north.  I certainly understand how rarity can enhance a bird’s desirability, so I was pleased to tally this bird for which Kaufman gives no range map in his field guide. 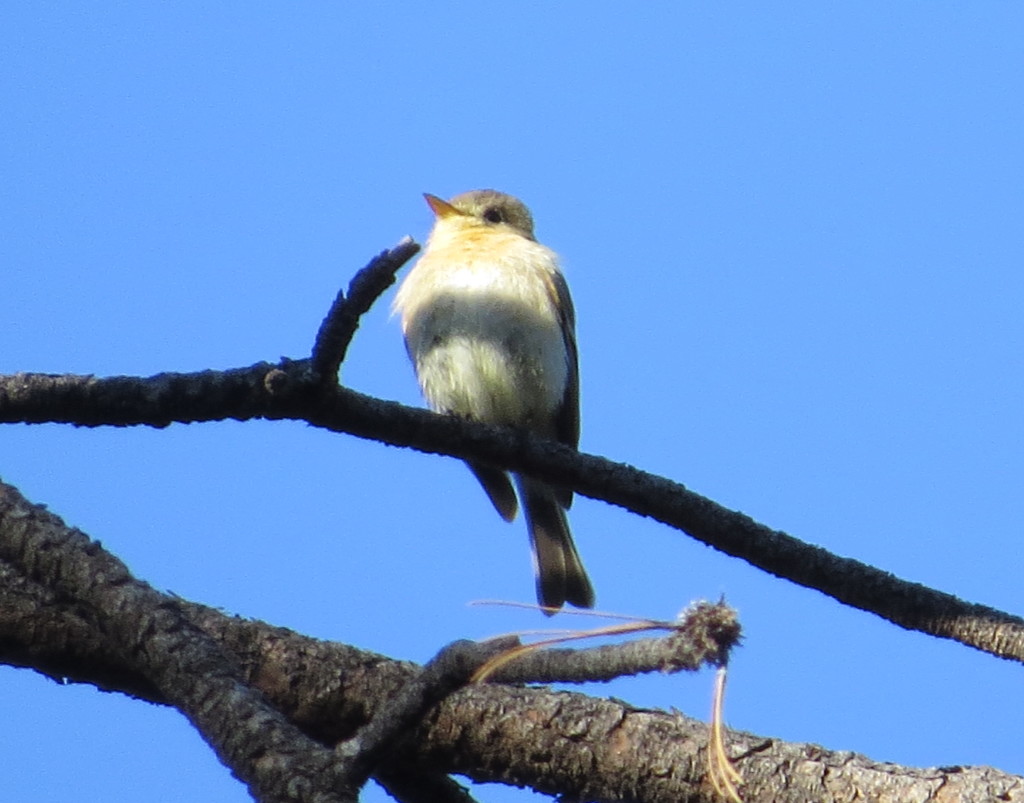 After some searching for a Greater Pewee, we ended up hiking the road down toward the lake.  The towering pines everywhere were awesome. 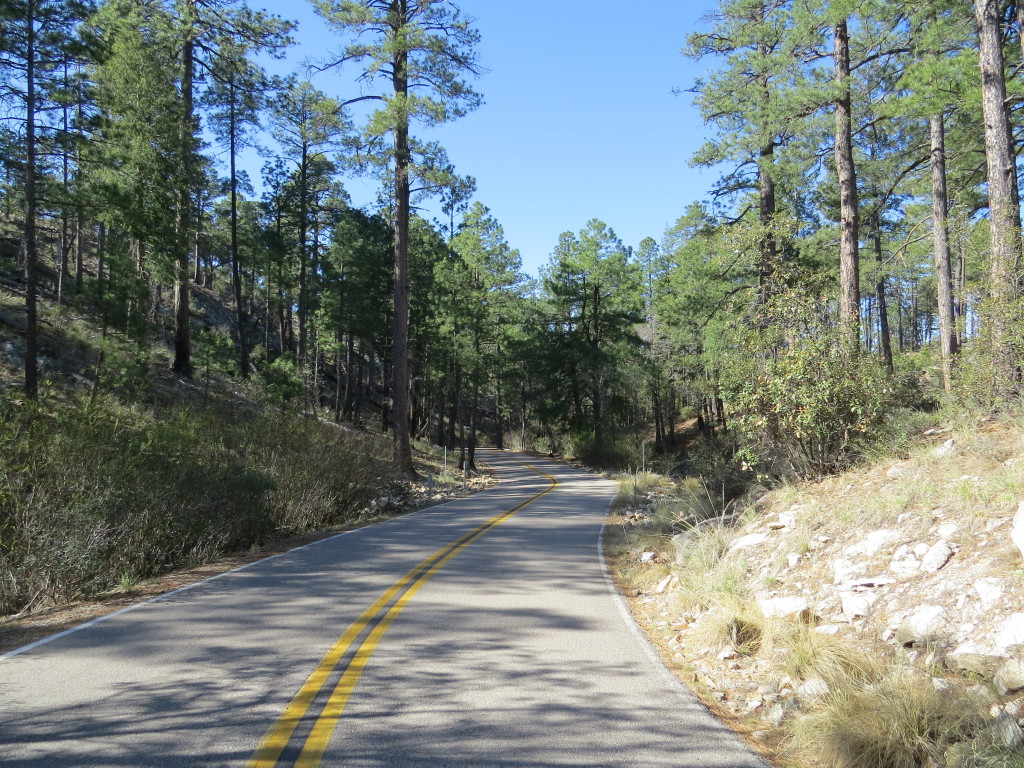 They were awesome because they harbored more Painted Redstarts. 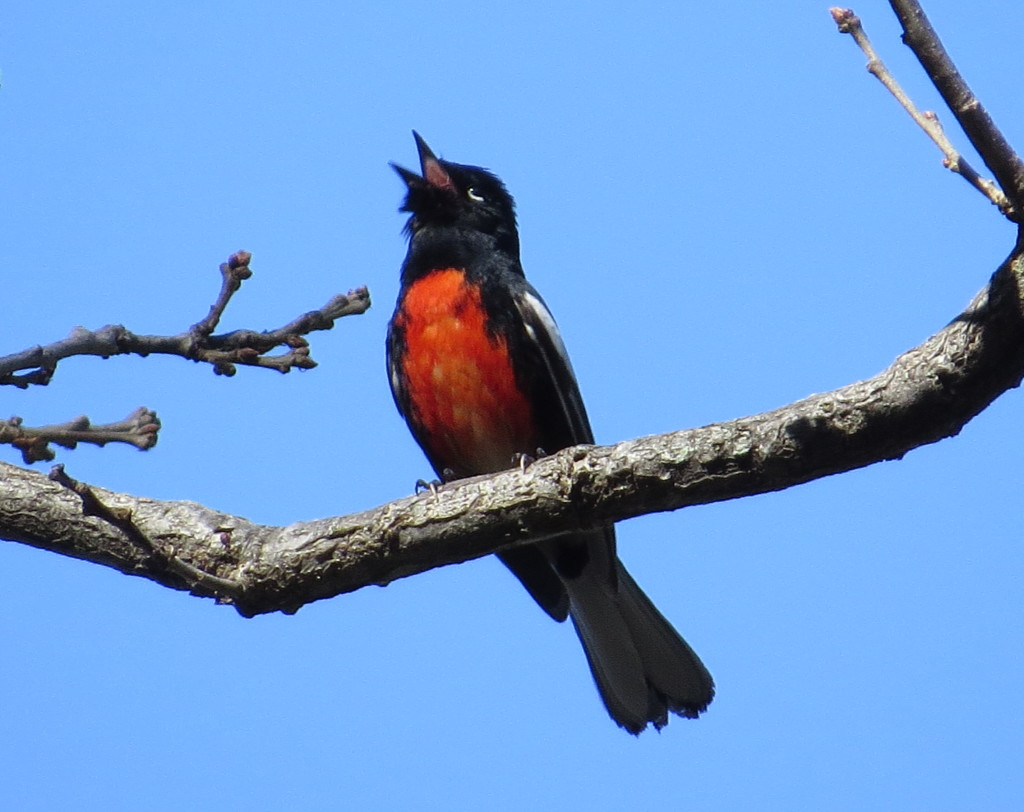 You will now see an exorbitant amount of Painted Redstart photos.  I will not apologize. You should not complain. 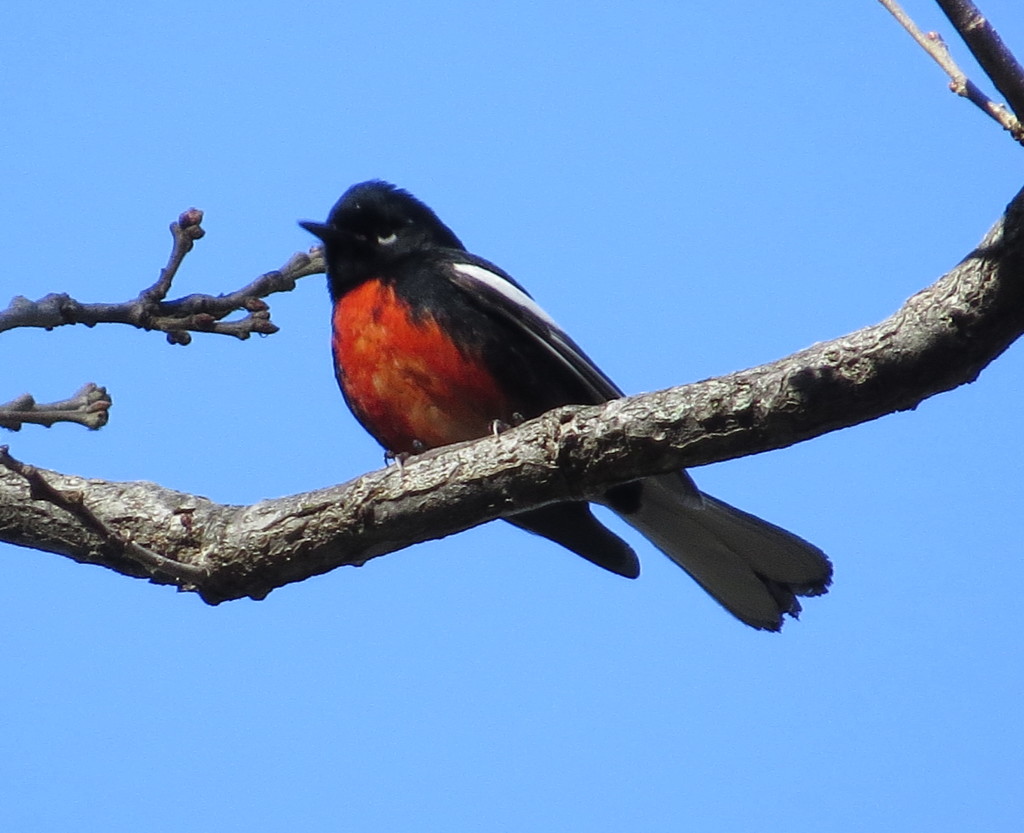 Tommy and Gordon don’t just find you Painted Redstarts.  No, they go the extra mile and get you multiple dancing birds literally at your feet. 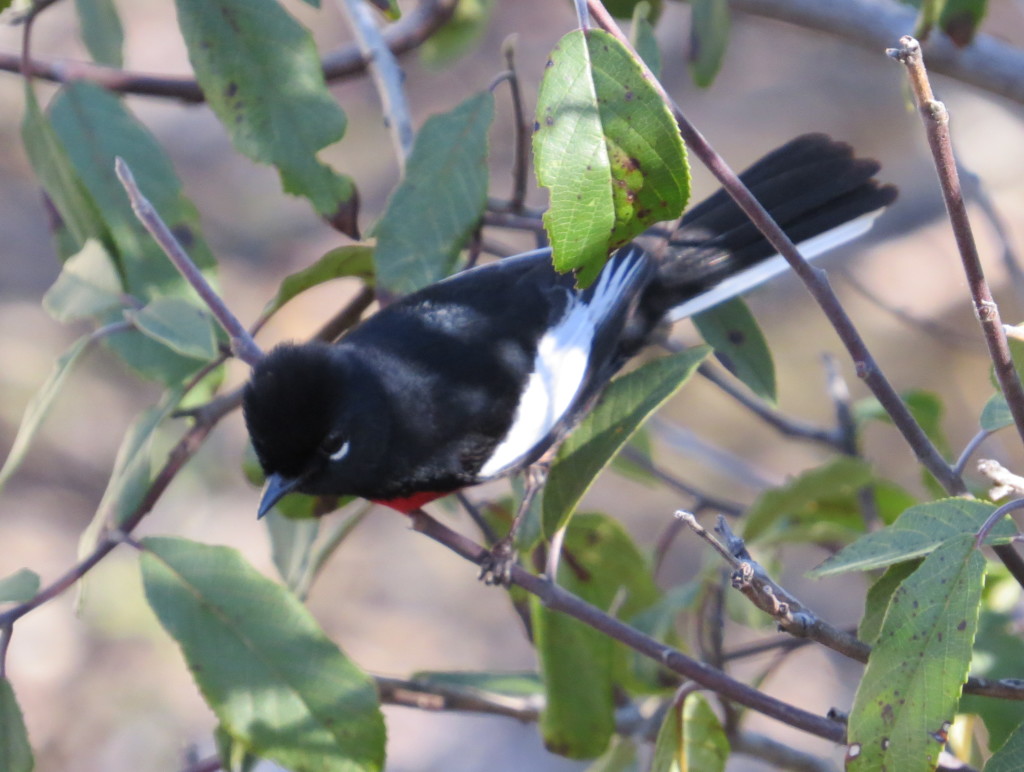 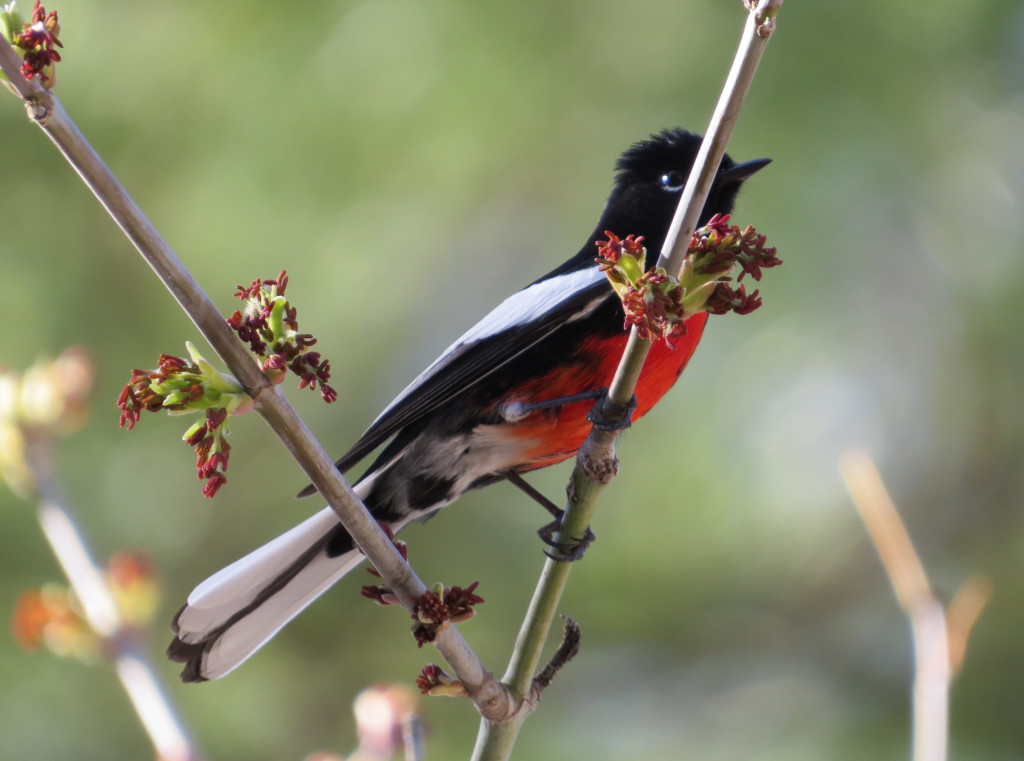 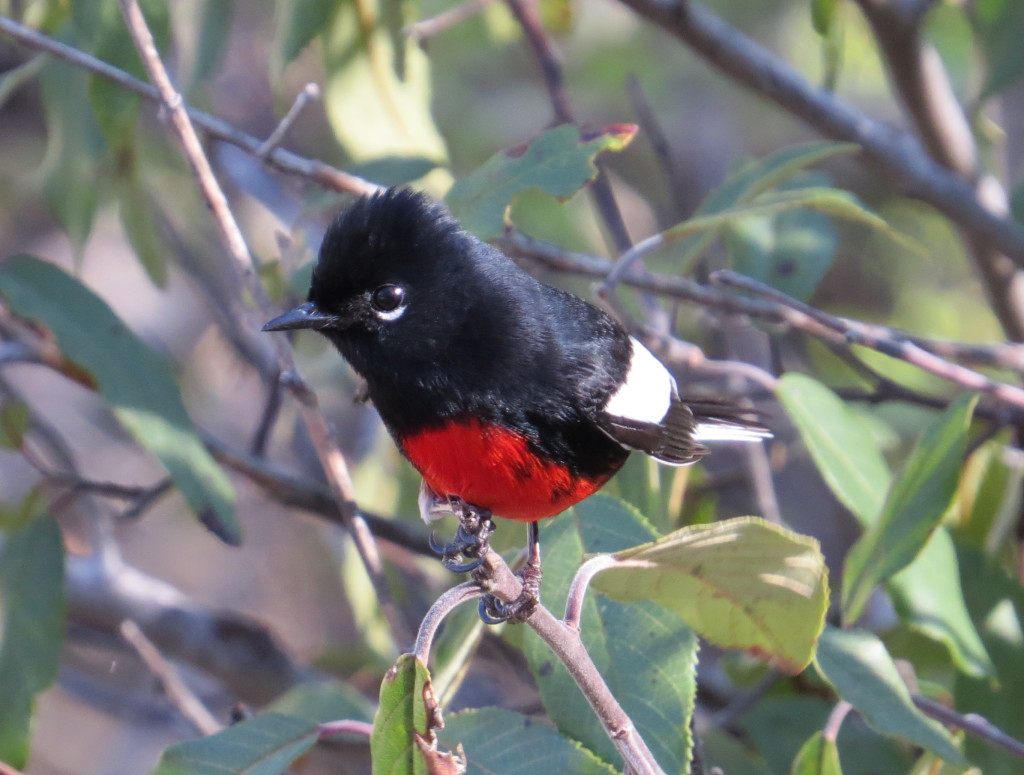 Honestly, my trip was made after this experience.  It had been a powerful couple of hours.  With Painted Redstarts adequately crushed, we could now focus on the Trogon search deeper into SE AZ.  As we hiked the hill back to the car, the guys pointed out a Hairy Woodpecker.  Normally a Hairy Woodpecker wouldn’t get the time of day on this blog, but I had to take a photo of this western variation to show my friends and readers back home.  All of our Hairy Woodpeckers have white spots on the wings and back.  Like so many other birds and color morphs, the western US always gets the good ones. 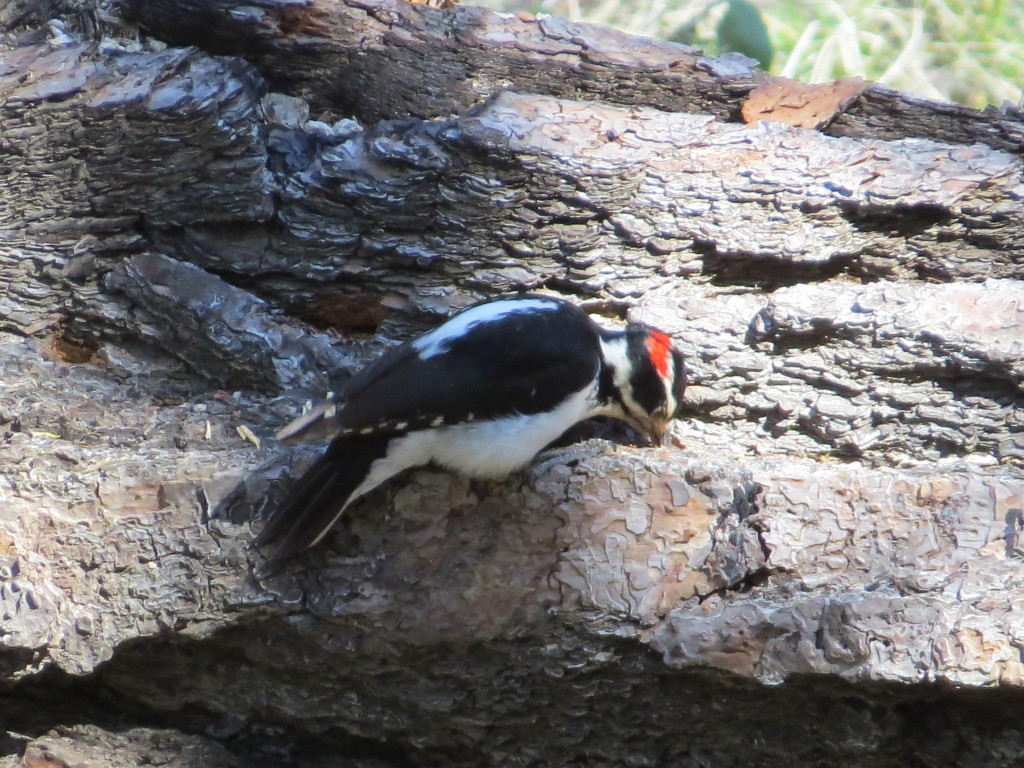 Once we got to the area where we had the Olive Warblers, we could hear the distinctive “Jose’ Maria” song of the Greater Pewee.  It is such a cool sound as Tommy has often described on his blog.  After a little searching, Tommy spotted it way up high at the top of a pine. 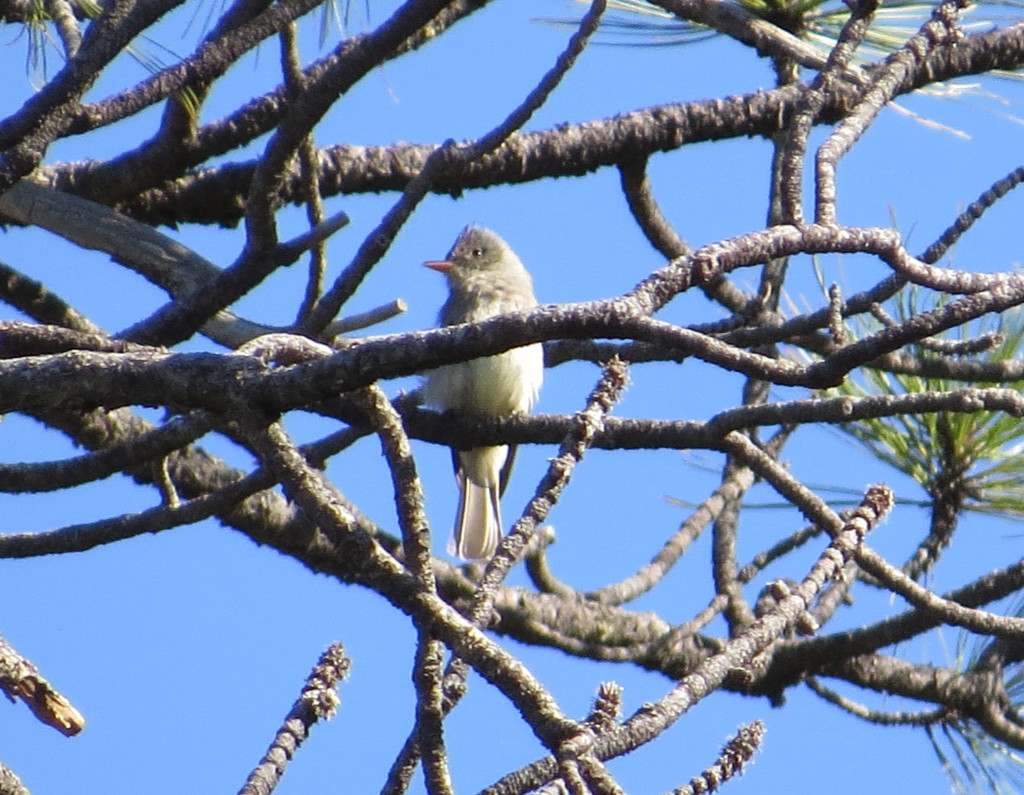 Mt. Lemmon was a tidy-little stop giving me two birds I’d dreamed about, Painted Redstart and Olive Warbler, along with six other life birds: Greater Pewee, Buff-breasted Flycatcher, Acorn Woodpecker, Hutton’s Vireo, Pygmy Nuthatch, and Yellow-eyed Junco.  Tommy and Gordon outdid themselves on this outing. Thanks Tommy and Gordon for all the great birds!

6 thoughts on “Arizona 2015: The Quest for High-Elevation Warblers on Mt. Lemmon”