After a successful hunt for a Gyrfalcon lifer and a Boreal Chickadee photo on Sunday, I was primed for a day of different birding objectives when I woke up at the in-laws’ house in the Northwoods Monday morning. I was expecting magic–I was going to the Sax-Zim Bog.  Part of that excitement was that, when given the choice between the Bog or hanging out with Grandma for the morning, Evan chose the Bog.  Based on recent knowledge I had, I knew this could be a special day of lifering and just downright fun birdwatching for him.  Doing something science-based eased the parental guilt of pulling him out of school on this day, especially since science (and other subjects) get pushed to the margins in this era of standardized testing where math and reading reign supreme.  Forget the guilt, I felt like I was doing something good.

Getting him up that morning was tough, but the promise of McDonald’s breakfast and the morning’s main objective-seeing Sharp-tailed Grouse do their courtship dance on a lek-was enough to get him going.  We left the house under an amazing starry sky (truly, there is no better place to see the night sky) to try to get to the lek around first light.  However, the breakfast errand and my negligence in not planning extra time to get all the way to Meadowlands in the southwest corner of the Bog caused a delay in my plans.  Needless to say, I was haulin’ down Co. Rd. 7.

Still, I brake for Great Gray Owls.  Coffee is a great way to start the day, but these are even better way to get the day off on the right foot. 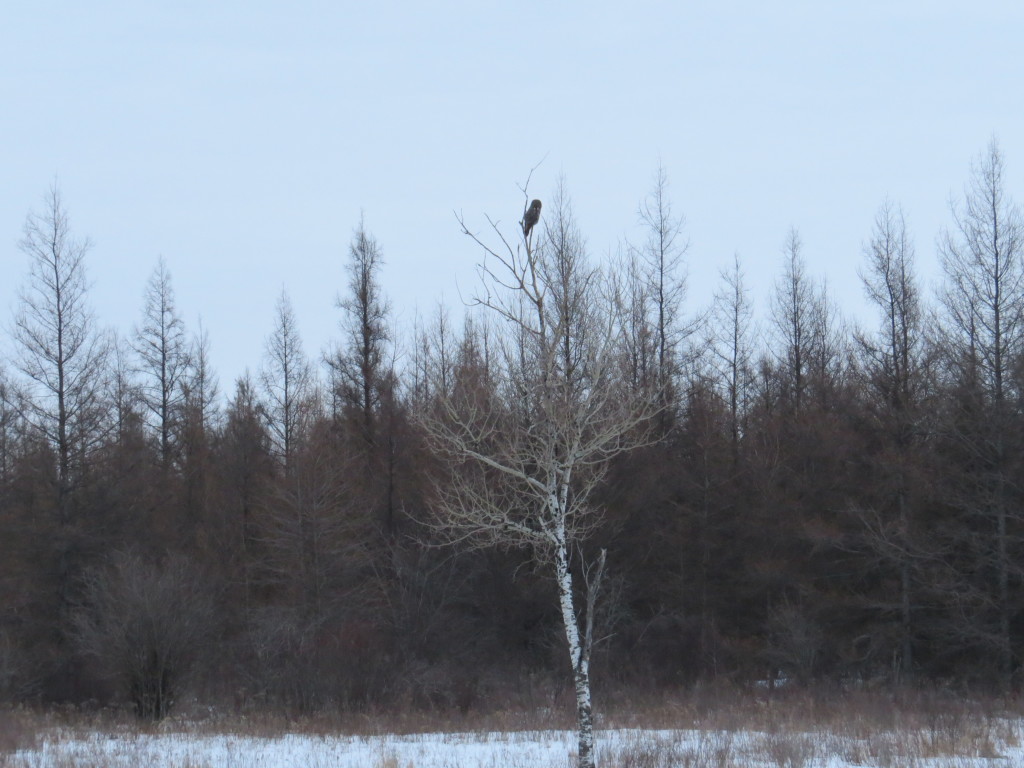 Note the distinct white “mustache” which is visible even in the diminished light of dawn and dusk.

I’d love to tell you how I spotted this thing, but you deserve the truth: I saw hazard lights in the dim morning light.  That usually means one thing in the Bog. Immediately I looked in the vicinity of the stopped car and saw the giant silhouette.  Brakes were slammed. A sleeping child was woken. Game on!  I was NOT expecting to see a Great Gray this trip.  They have been very sporadically seen since early January.  Many out-of-state visitors dipped on this species this winter.   Interestingly I had seen a report of a Great Gray on Co. Rd. 7 the previous evening, so I was keeping my eyes peeled.  I’d like to think I would have spotted it on my own.  But really, who cares? These things are just fun to see–well worth delaying our Sharp-tailed Grouse plans even more. 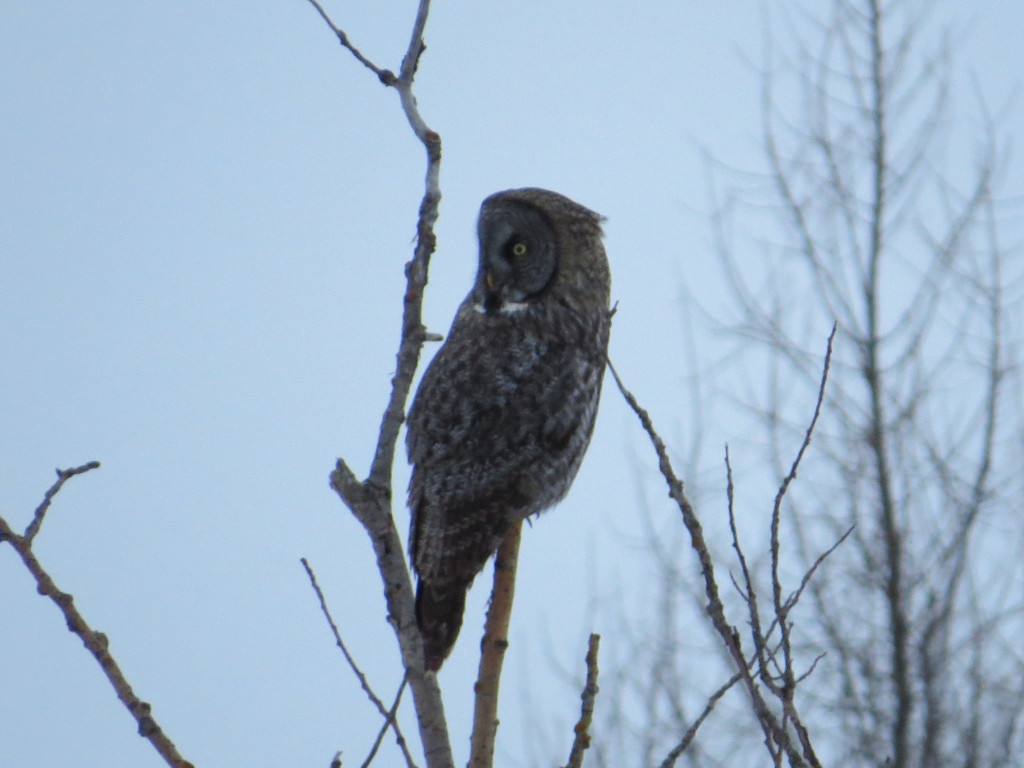 Call me crazy, but I prefer to watch Great Gray Owls on gray overcast days and in gloomy light.  There’s just something fitting about it that adds to the mystique of this bird. 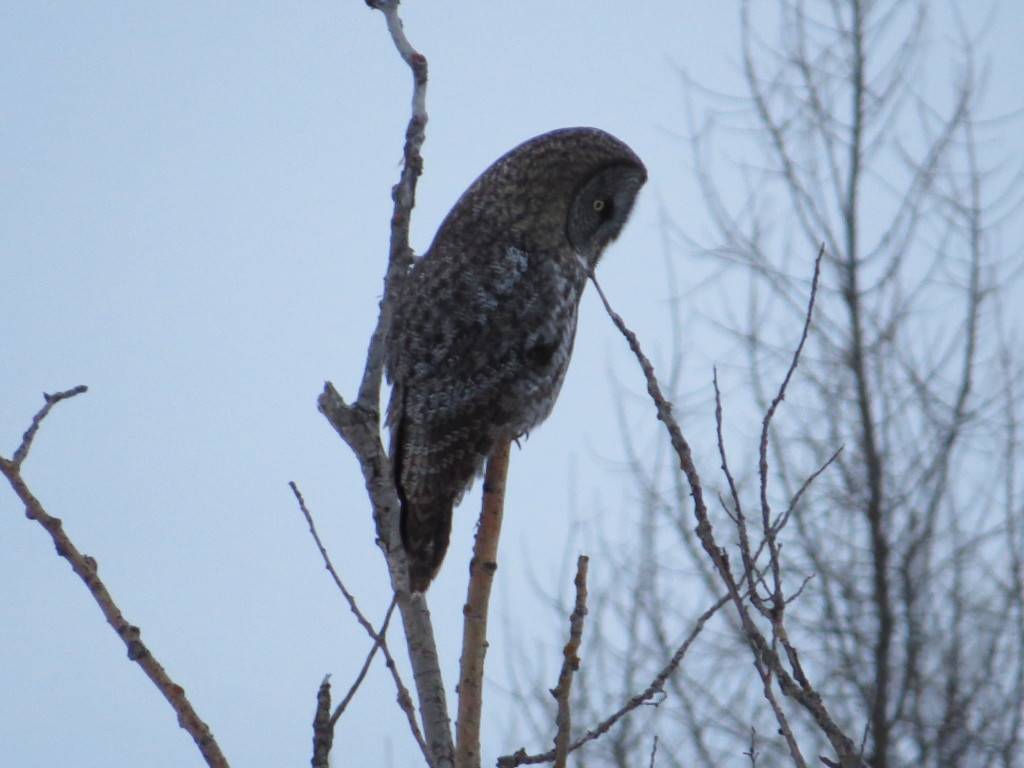 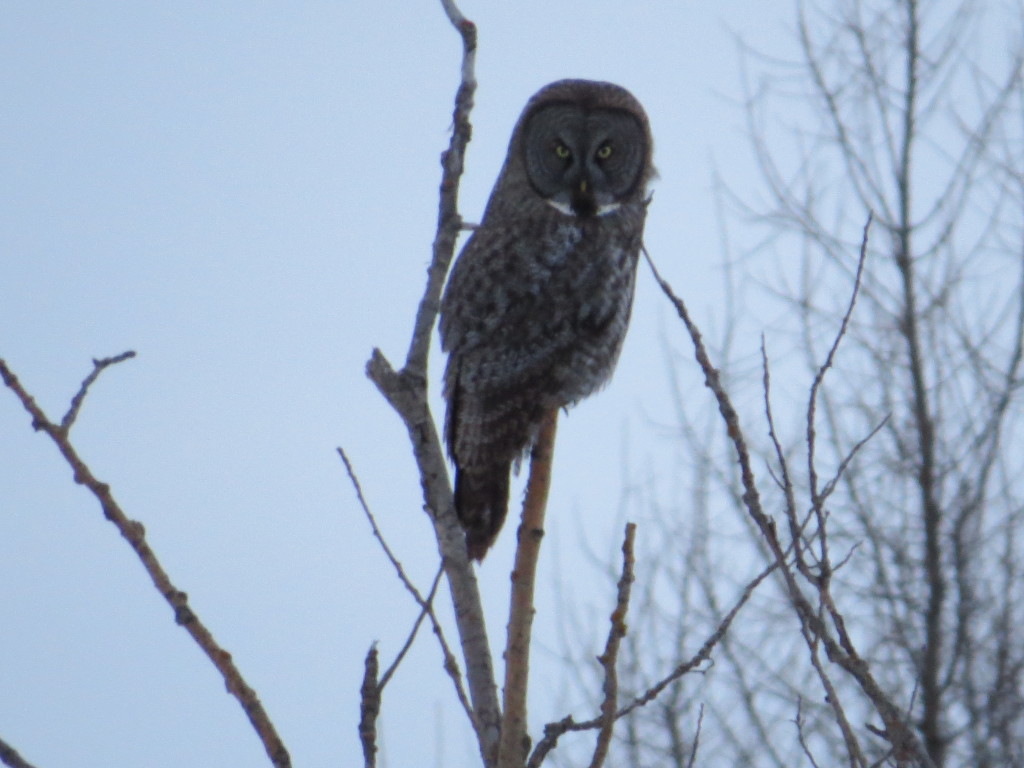 Despite this good fortune, I was confounded.  How much time could I devote to watching this owl?  I had to get to the lek if I wanted to see Sharp-tailed Grouse.  Why does birding always have to be so stressful and full of decisions?!  Mr. Owl, or I should say Mr. Crow helped me out.  After 15 minutes or so of owl-watching, an American Crow flew in out of nowhere right at the Great Gray.  It was awesome to watch the owl’s defense posture, spreading out his wing and ducking his head.  But he didn’t want to be bothered any more, so he departed for the deep, gray recesses of the Tamarack bog behind him.  Evan was using my camera at the time to get good looks at the owl, so I wasn’t able to capture this. I will offer up a short video for your viewing pleasure, though.

Next stop was the lek just north and east of the intersection of Co. Rd. 29 and Racek Rd. We got there around 8:15.  Birding friend Clinton Nienhaus had told me that he had observed the grouse dancing around 7:30 last week, which was 8:30 this week thanks to Daylight Savings Time.  So we were still on time.  I found the small group of eight Sharp-tailed Grouse over a quarter mile east of the white house.  They were little brown dots in a field of snow, very far from even the camera’s view. We were able to view them a little closer from Racek Rd. 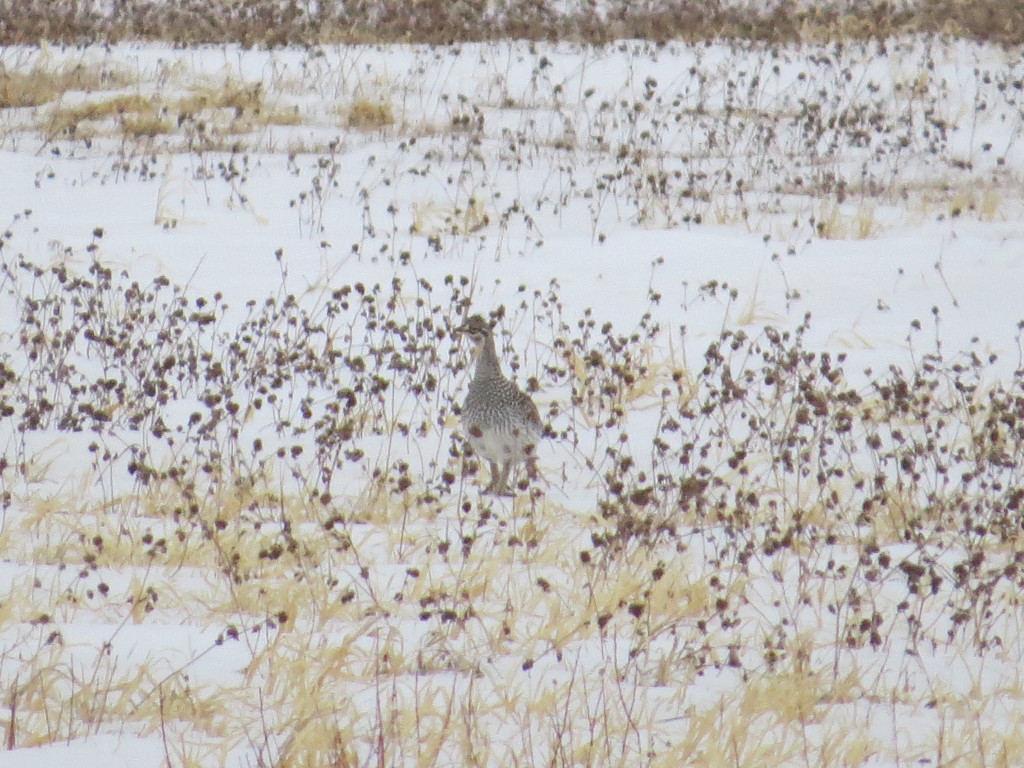 And they were doing their courtship dances!  It was an incredible thing to watch even from a distance. 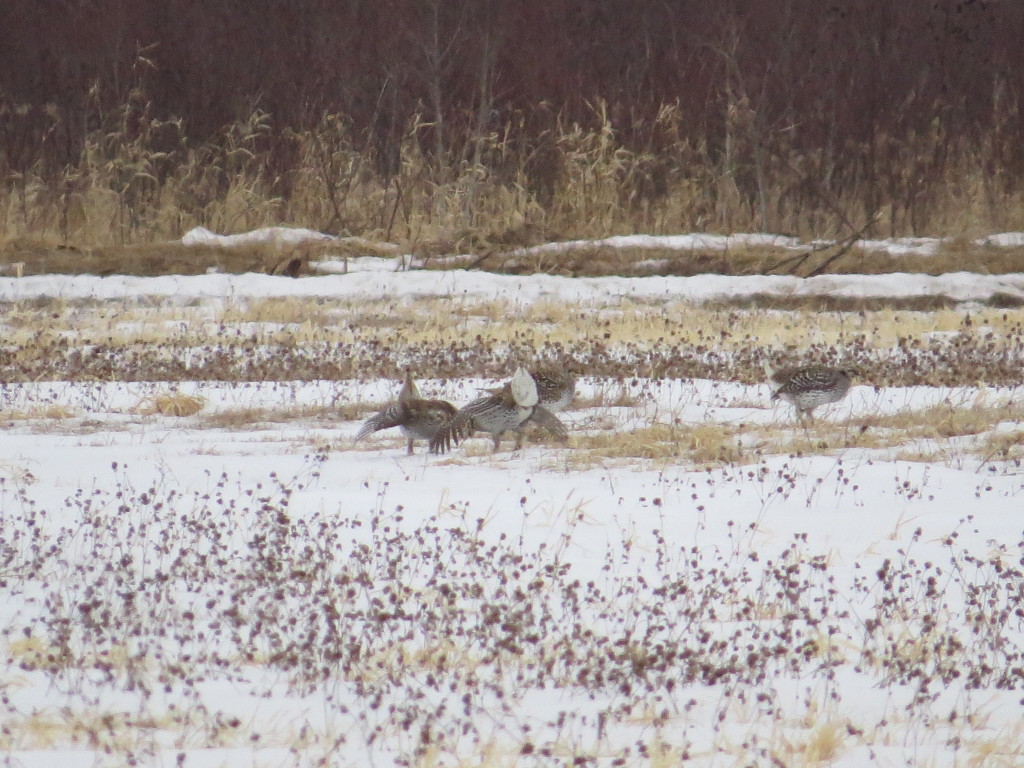 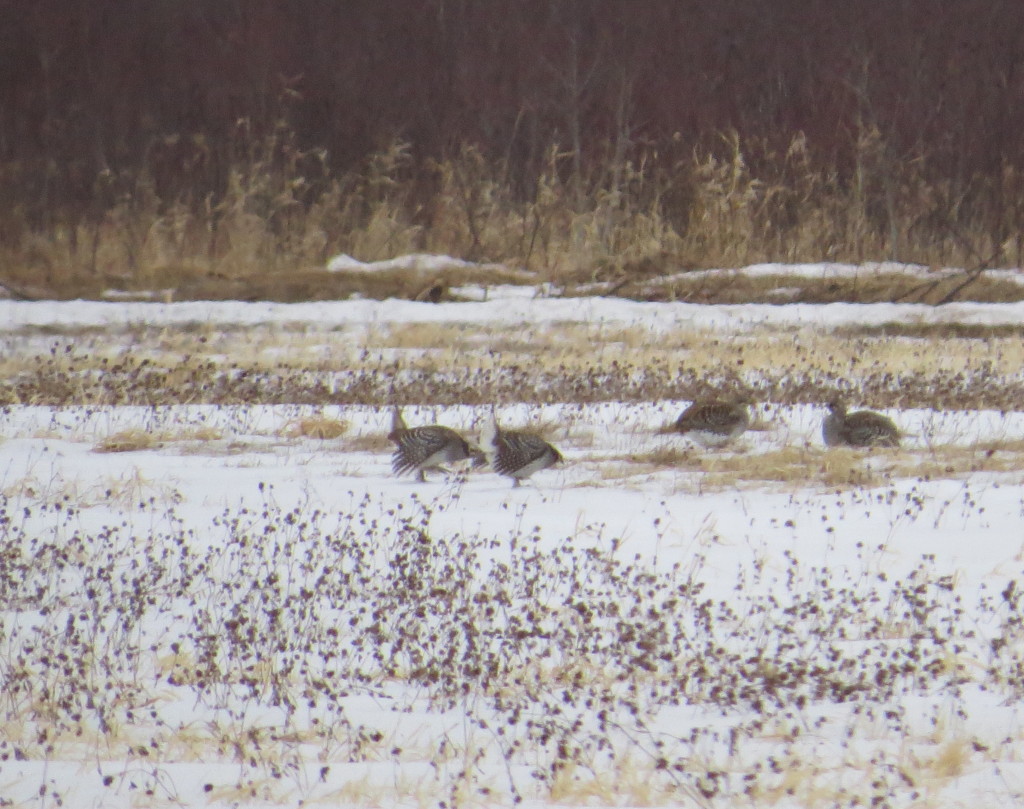 This was a life bird for Evan.  It wasn’t even a state bird for me; I had seen a group of 12 or so about 18 years ago pecking grit off MN Hwy. 73 near Sturgeon.  So for me it was fun to see this bird as a birder and add it to my state eBird list.  Evan and I really enjoyed watching these grouse.  We sat together, him on my lap, watching the dances on the camera’s LCD out the driver’s side window.   We were quite content to just hang out and see what they’d do.  Under the weight of a freshly minted 8-year-old I was reminded of how quickly time passes and how kids don’t stay little long.  Sharing this moment with Evan and watching these birds is one I won’t forget.

The previous weekend my friend Steve Gardner saw these same Grouse on the same day Clinton saw them dancing on the lek.  However, Steve saw them at a later time in the morning as they were running around the yard of the white house where many people have been seeing them come to the bird feeders.  Piecing these two observations together, I knew that eventually the Grouse would head for the white house after their courtship dances.  Sure enough, around 8:45, the theatrics were over and protagonist and antagonist Grouse alike hung up their theatrical costumes, slapped backs like old friends, congratulated each other on another great performance, and headed to the bar…er, bird feeders.

Evan and I hopped onto Co. Rd. 29 for better views.  The lek is to the left of the garage and behind the row of pines about a quarter mile. 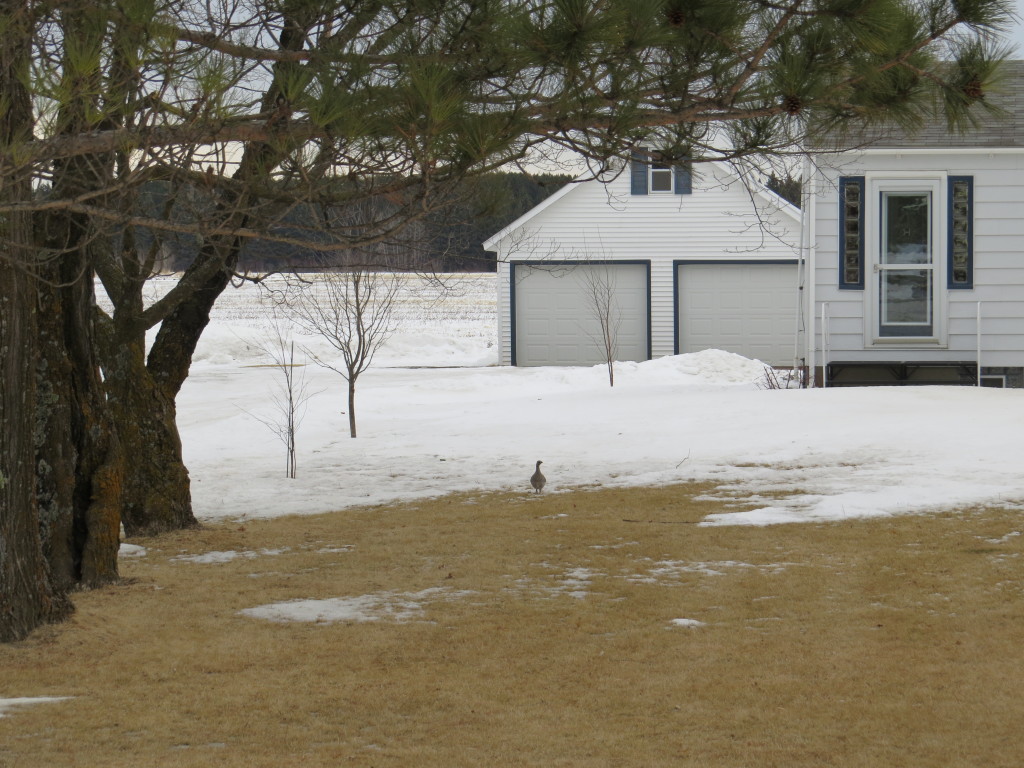 It was a gray day, but we were still able to photo crush some Sharptails. ‘Sharptails’ is a throw-back term to when I hunted them long ago in Montana.  It’s just what people called them, and I have trouble letting go of that nickname for the cumbersome official name. 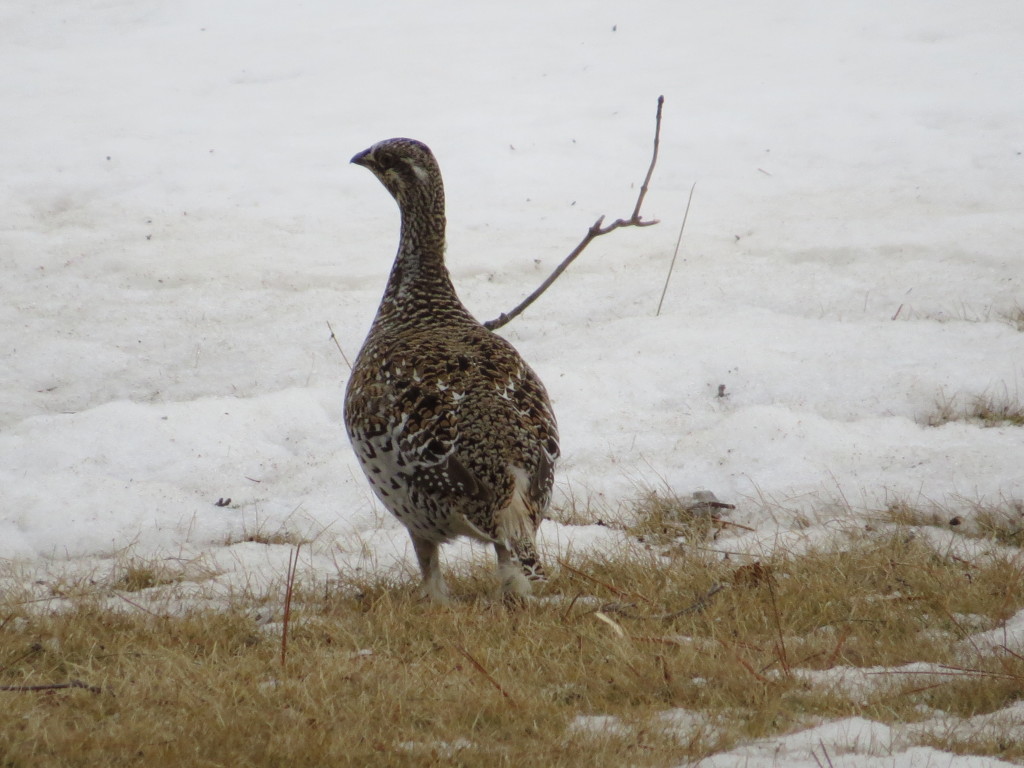 I didn’t get many shots because something spooked the Grouse back to the lek area. Looking at this last picture I took, I’m guessing a raptor of some sort was cruising overhead. 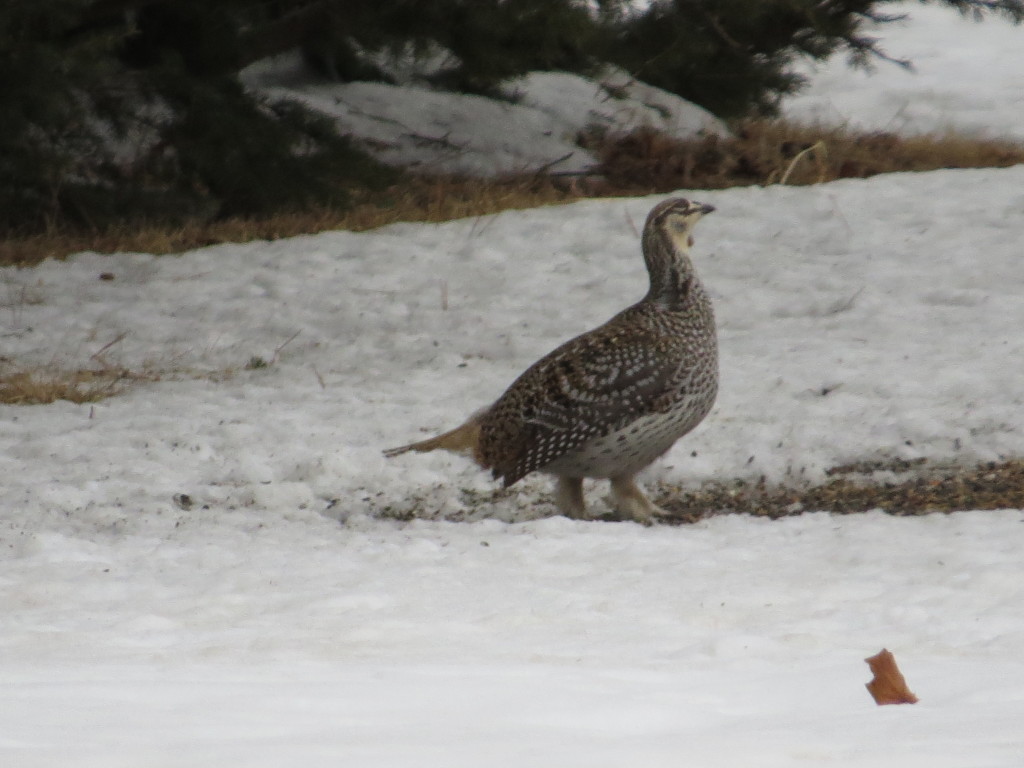 Like the Great Gray, these Sharptails made it easy for us to move on to something new in the Bog.  Next stop was the Admiral Road feeding station; Evan needed a Boreal Chickadee lifer, and I wanted more photos as well as a lifer Black-backed Woodpecker that had been hanging out just south of the feeders.

By the time we got to Admiral Road, the overcast sky was gone, and it was a glorious blue-sky day.  There were a couple of cars of birders at the feeders.  We watched for the Boreal Chickadees for awhile but weren’t seeing them.  So I got out and walked the road looking and listening for the Black-backed.  An Ohio birder approached me asking what I was looking for, and I learned that he hadn’t seen the Chickadees after a half hour wait. Yikes. Maybe Evan won’t get that lifer today.  Just as we were going to give up, though, the Boreals stormed the feeders!  Mr. Ohio and Evan lifered at the same time.  Evan was about 10 feet away from the feeders and didn’t need me to point out his new bird.  So stunning in the now gorgeous light!

Time to move on again.  As much as I’d like a Black-backed Woodpecker, I was more anxious to get a Hawk Owl for the winter.  I can probably get the resident Black-backed Woodpecker in the summer.  On the way to Hellwig Creek (mile marker 29) on Hwy. 53, we bumped into a Northern Shrike and three Black-billed Magpies.  How is that you can walk up to these things in a parking lot in Colorado and club them if you choose, and yet I can never get one to stay still for a photo in northern Minnesota? 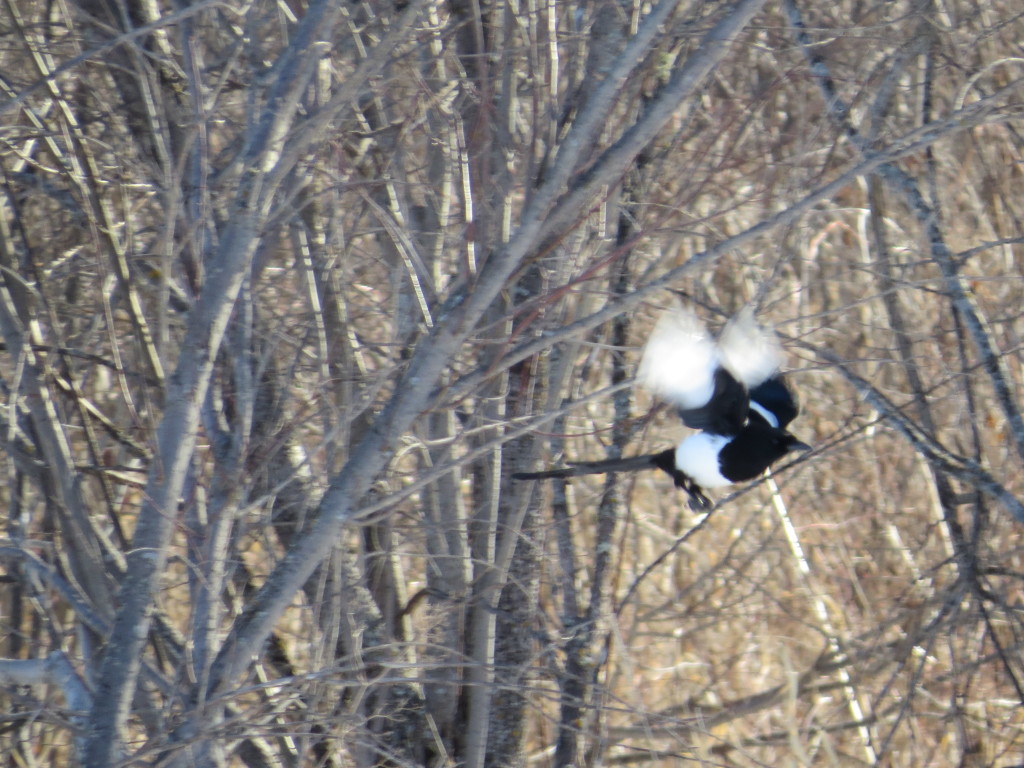 Evan and I were now racing the clock as we went south of the Bog toward Canyon on Hwy. 53 in search of the Hellwig Hawk Owl.  Grandma was bringing Marin southbound after a morning of tea parties, nail-paintings, etc to meet us so the kids and I could leave the area before noon to get back home in time for Evan’s piano lesson.  Hawk Owls are quite conspicuous when present, often perching on top of Spruce trees.  I just could not locate it.  Maybe it had gone north already.  Nuts! I really wanted to see this owl again. This was one of my main birding goals for the trip.

Evan and I headed north again to meet up with Grandma and Marin, only we were stopped in our tracks by a Timber Wolf crossing the road!  It stopped broadside just 30 feet from the car, but I couldn’t get the camera out in time.  Instead I got a running shot as it went down the snowmobile trail. 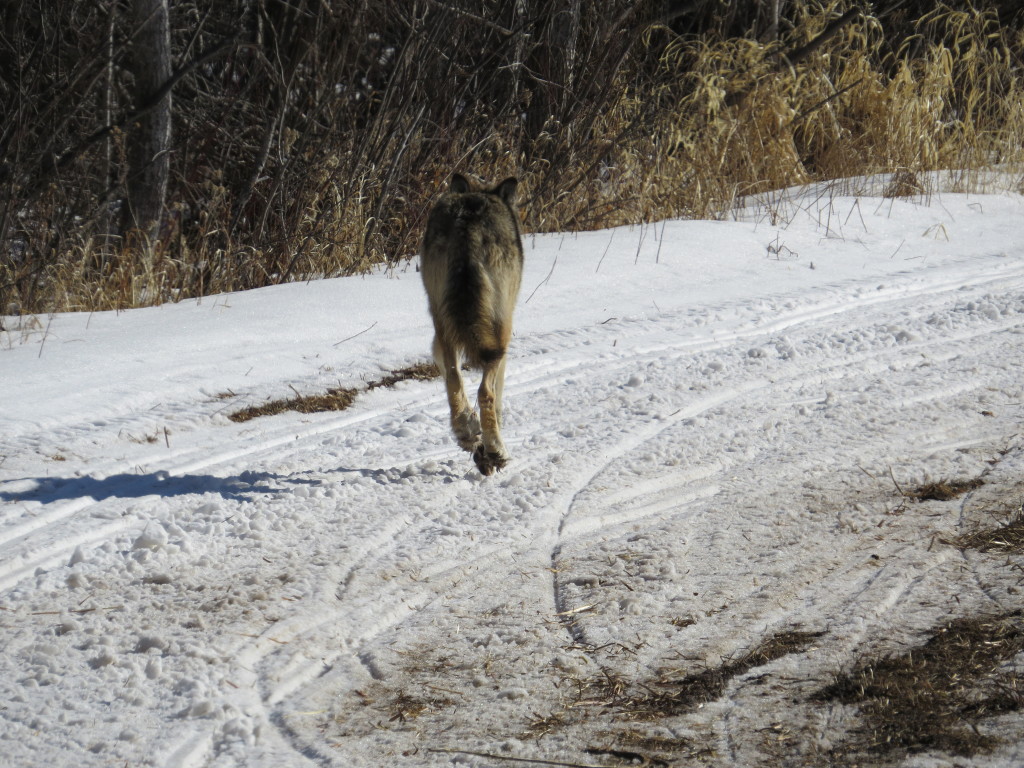 Sadly we discovered the wolf was injured as it carried one paw.  Evan was pretty distraught over it, wanting me to call somebody even.  I assured him, perhaps incorrectly, that the wolf would be okay. (Though it did look a bit skinny.) 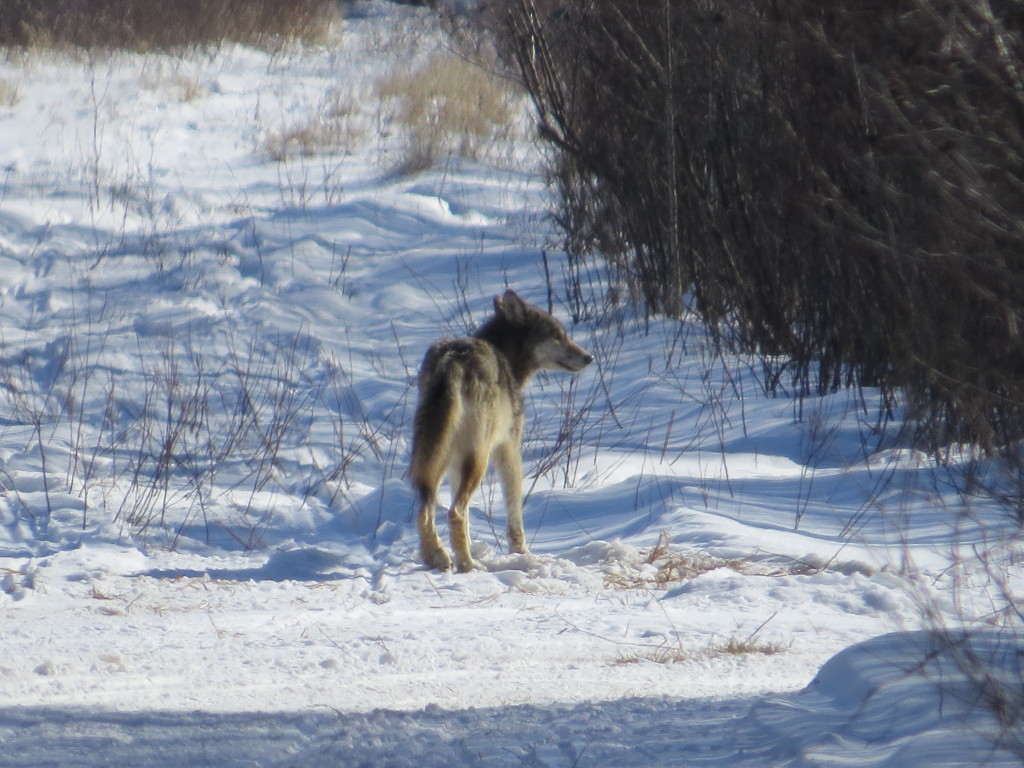 After rendezvousing with Grandma and Marin at the Anchor Lake Rest Area, the kids and I were now headed south.  I would be going by mile marker 29 one last time.  It was my last hope for Hawk Owl.  I texted JG Bennett and Clinton Nienhaus to get more info on which side of the highway it had been seen.  JG shot back right away that it was the west side.  At least I now had somewhere to focus.  As we went by Hellwig Creek, I scanned every Spruce top. Nothing.  Then, there! A glob in an Aspen tree of all places was moving! It was Hellwig, the Hawk Owl!!  Do you see him?  And do you see all those perfect Spruce tops he’s NOT sitting on? 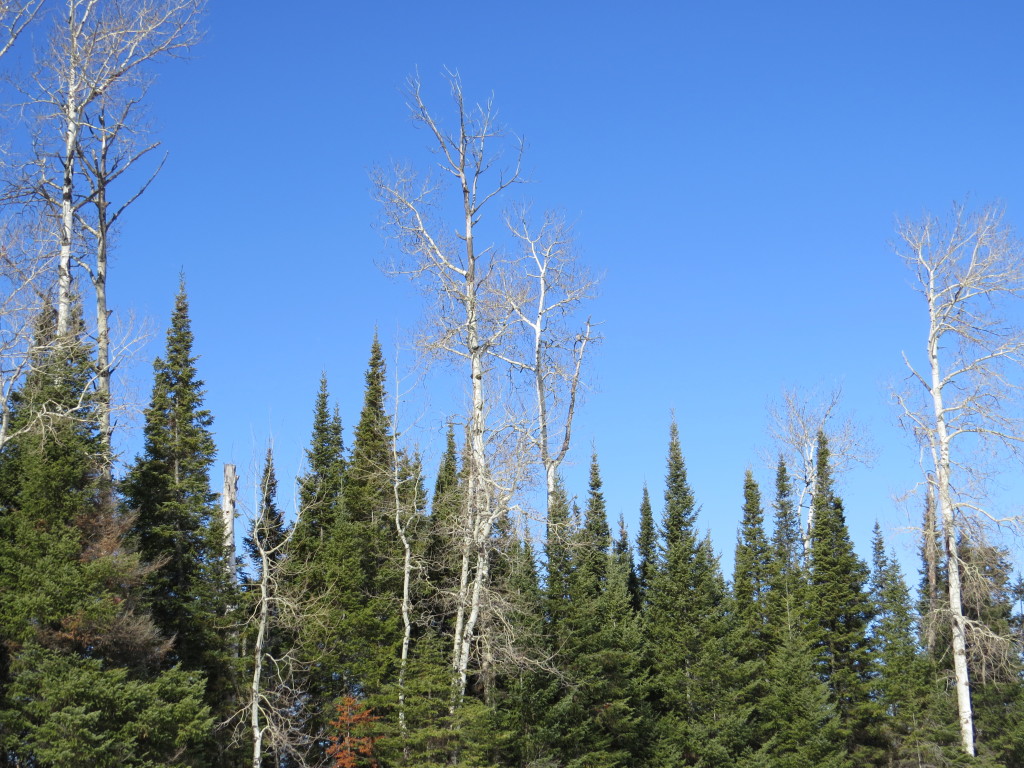 This was my first time photographing a Northern Hawk Owl with a blue sky background.  Now if only I could get the classic shot on top of a Spruce with a blue sky! 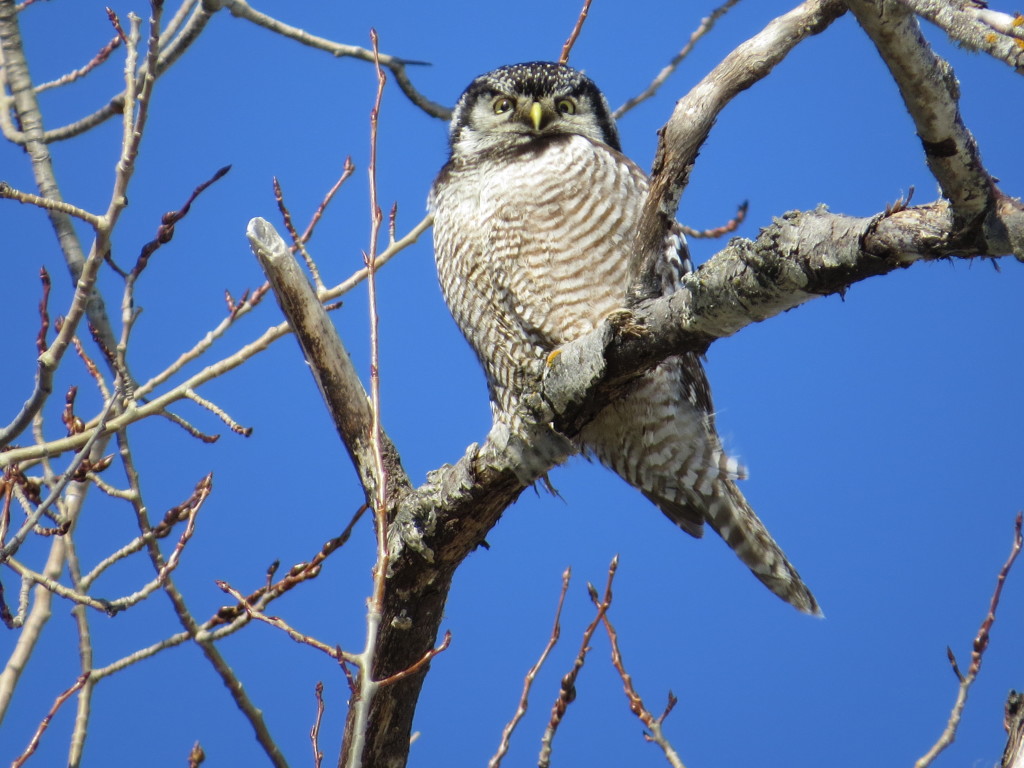 This Hawk Owl didn’t care about anything, especially that I was underneath photographing him.  Didn’t bother him one bit.  In fact, he went about his business of becoming the cleanest Hawk Owl in the land.  These things remind me of cats. 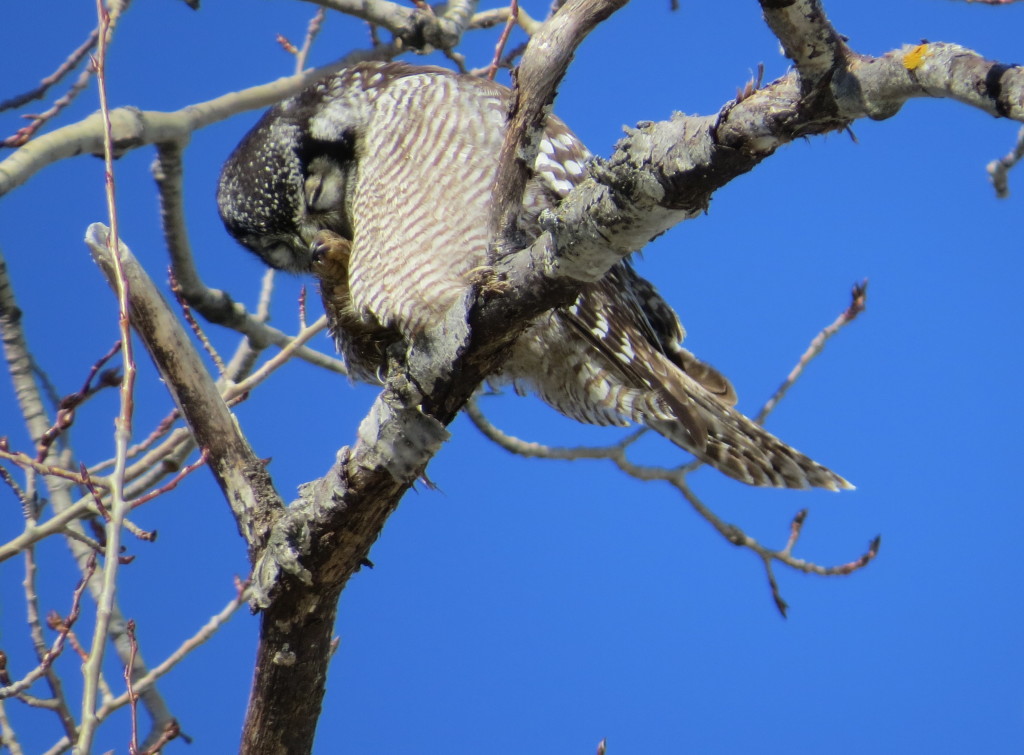 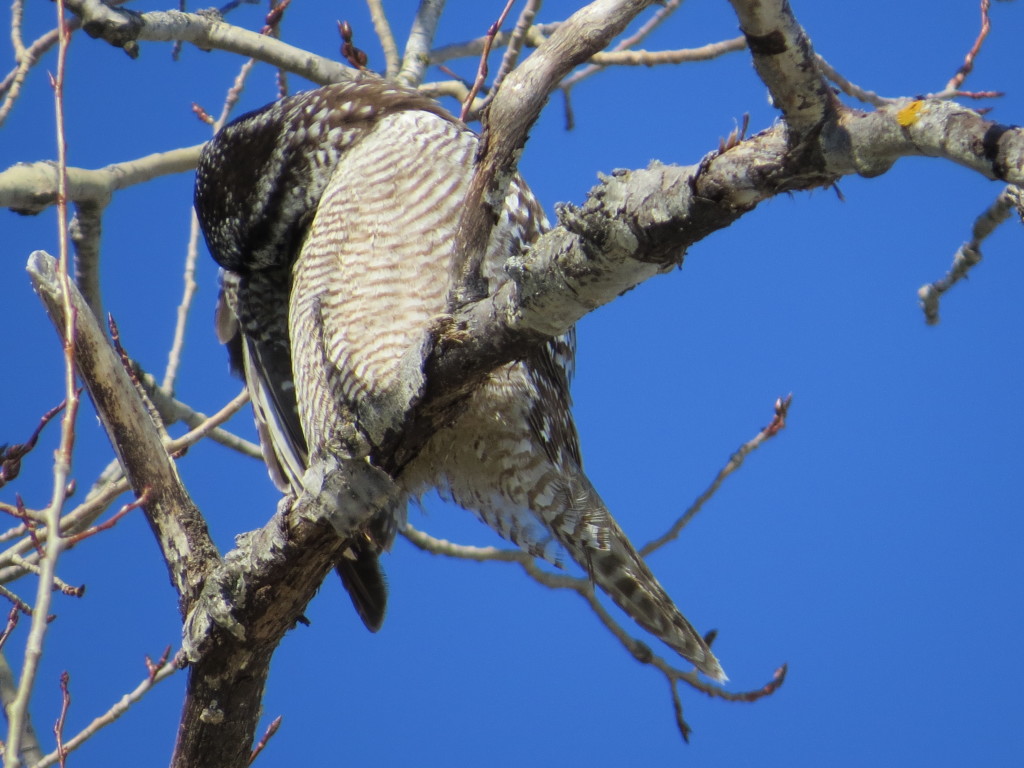 And then the uh, you know. 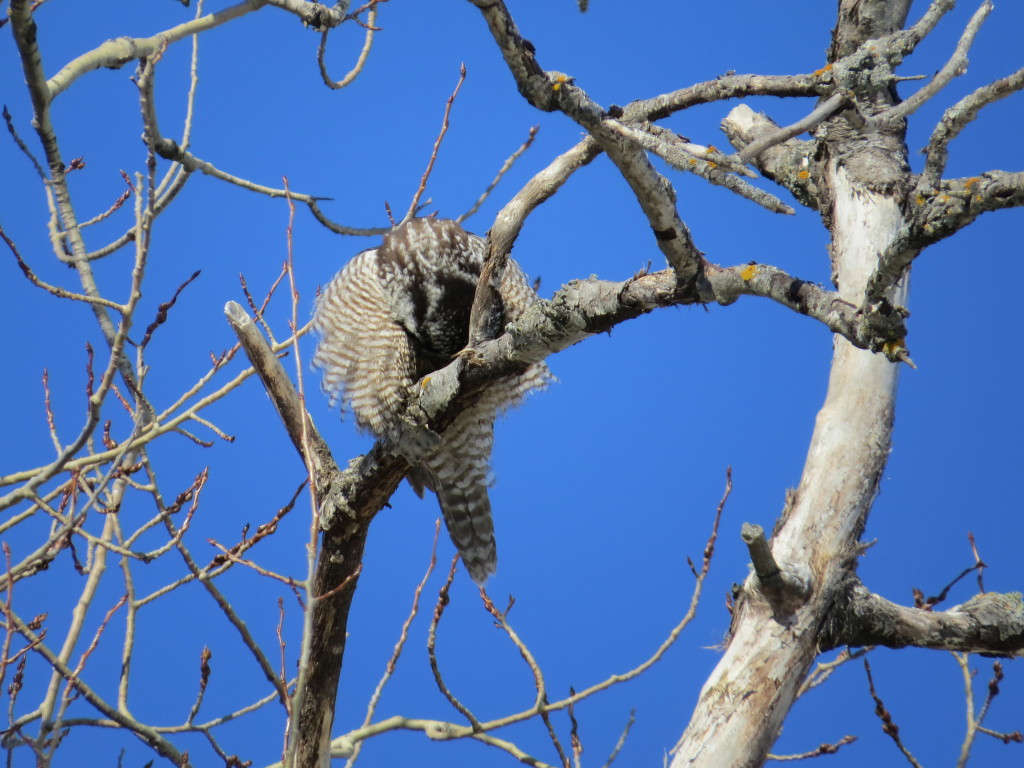 Hawk Owls, like many owls, are birds of many faces and poses. 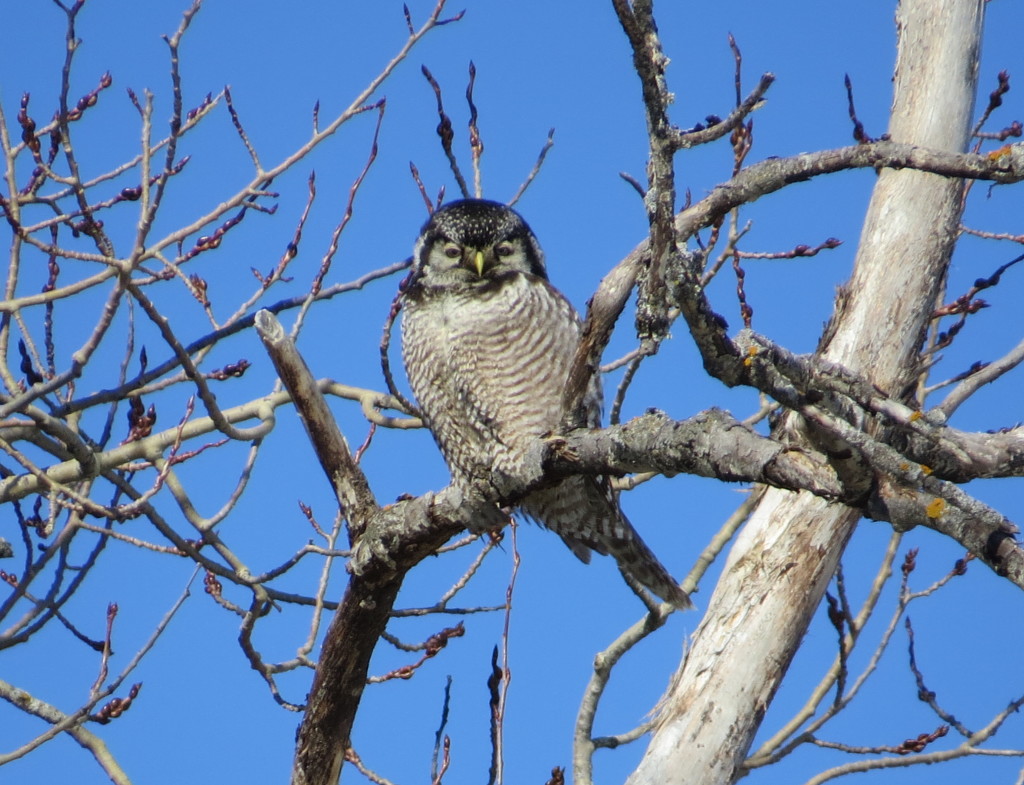 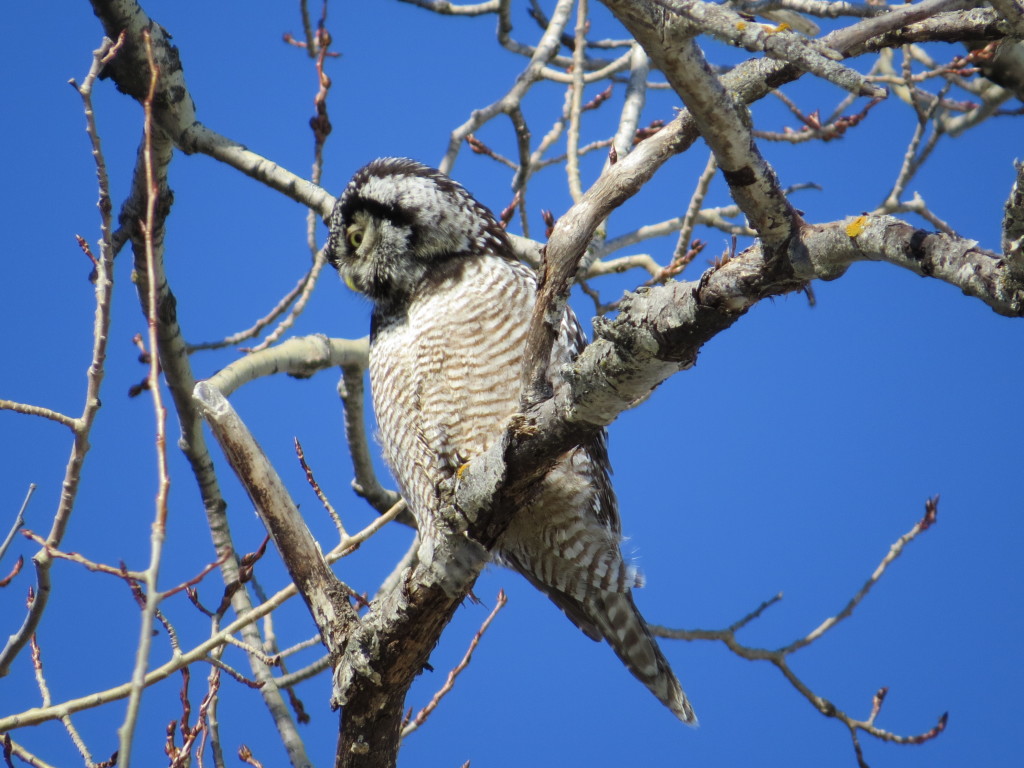 And finally the classic look is its namesake, a bird that looks like an owl but perches like a hawk. 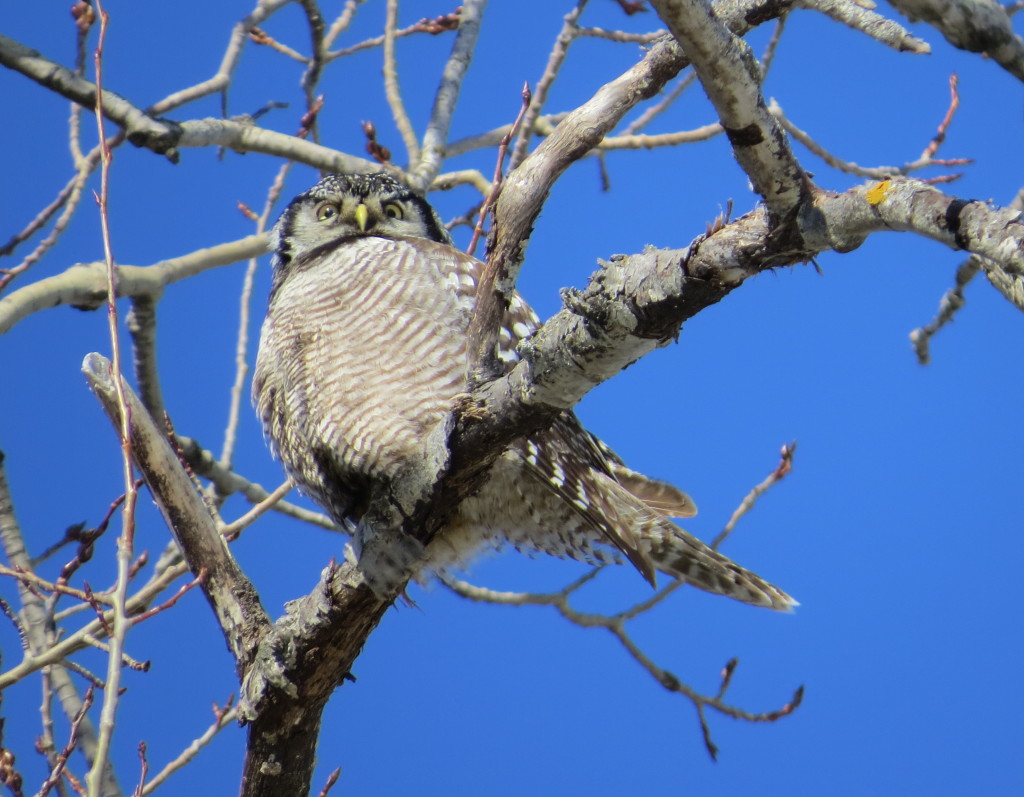 Here’s another short video that captures some of the essence of this awesome owl.

So there you have it. Two lifers for Evan (Boreal Chickadee and Sharp-tailed Grouse), four birding objectives of mine met (lifer Gyrfalcon, photograph of Boreal Chickadee, eBird record of Sharp-tailed Grouse, and year bird Northern Hawk Owl), and sprinkle in a bonus Great Gray Owl and other cool northern birds for taste–I’d say it was a successful end-of-winter field trip up north.  And we were home around the time that Evan would have gotten done with school for the day.The northern gulls, sea ducks, and Black-backed Woodpecker will have to wait for another winter trip.  For now, though I must tie up some loose ends and prepare for a lifer-fest in Arizona in a couple weeks.