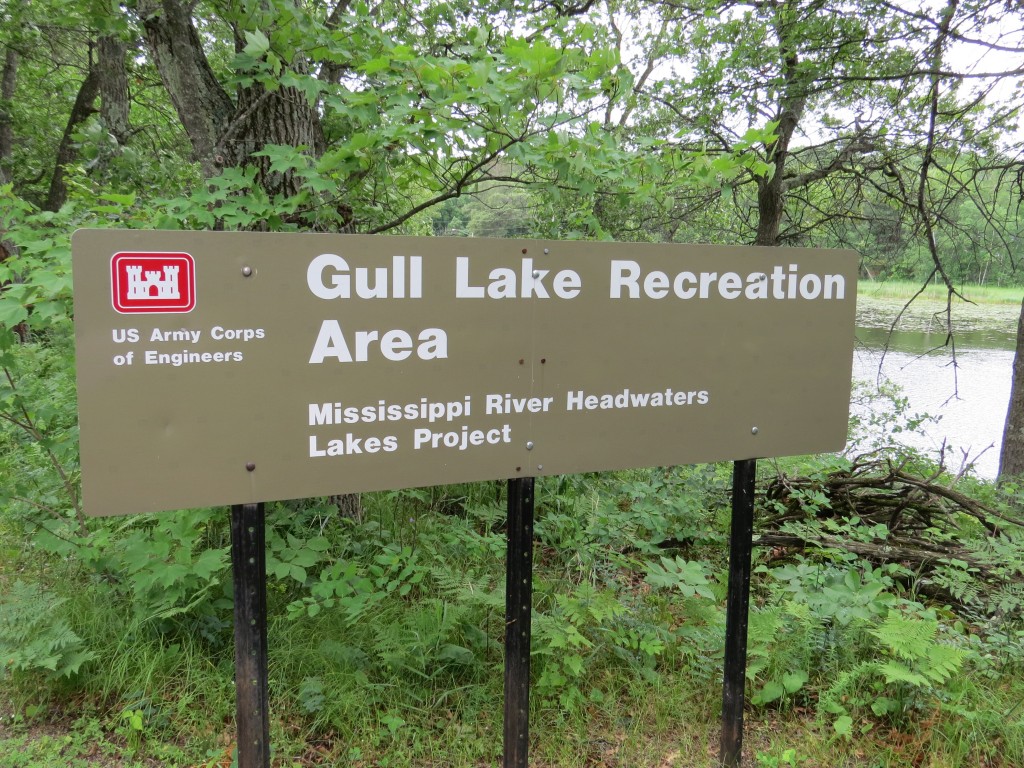 Every summer we take at least a couple camping trips with Melissa’s parents and our two nieces.  Usually we stay at state parks, but we procrastinated a little too much on making reservations and ran out of time to get a couple camping sites on a weekend. Fortunately Melissa stumbled on to a great alternative which appears to be one of the best-kept secrets in the camping world.  Until now.  It turns out the U.S. Army Corps of Engineers has recreation areas at many of their various projects.  And usually those recreation areas have a full-fledged campground.  So we booked a couple sites at the Gull Lake Recreation Area near Brainerd – a halfway point between our home and Melissa’s parents’ home.

This past weekend we camped at Gull Lake, and I was thoroughly impressed with what those Army engineers have done.  Never have there been more level, well-maintained sites.  Never has there been a better public shower house in a campground.  And never has there been better engineered service. Within minutes of arriving, a small squad of park rangers shows up on their Ranger utility vehicle to check us in and deliver firewood right to the fire pit.  And after they hand you your receipt and tell you your firewood purchase is tax deductible, they ask if there’s anything else they can do.  I would bet they’d even refill your Coke, that’s how good they are. 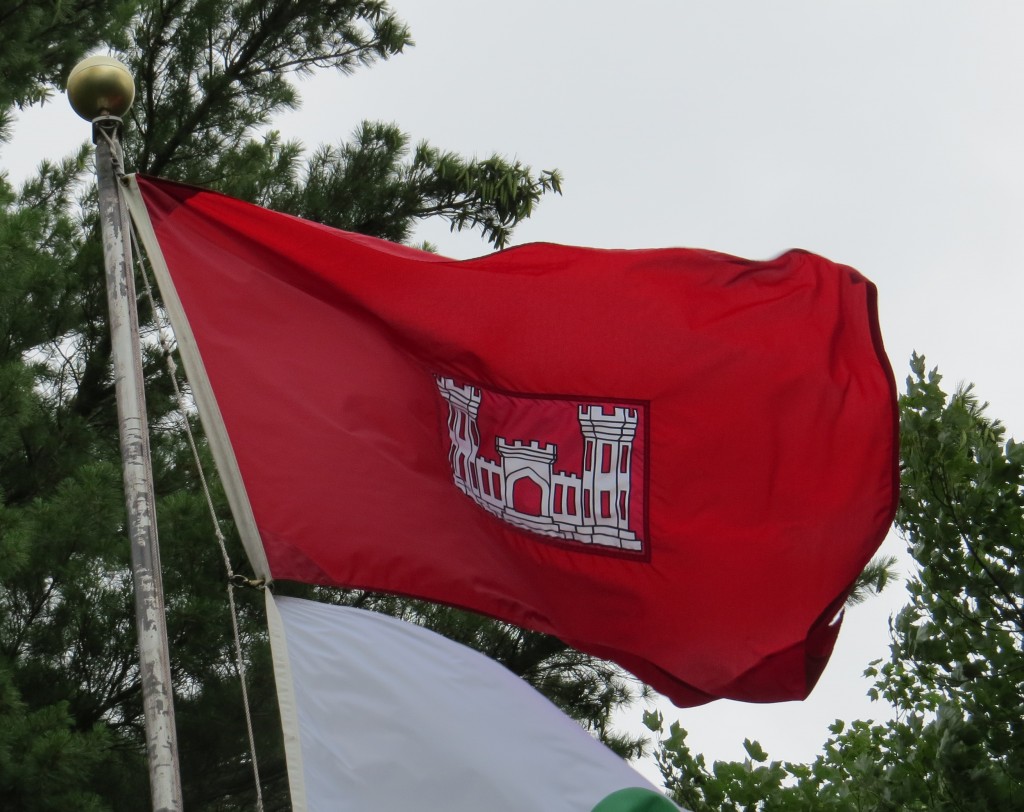 The overkill and built-in redundancies by the Army’s engineers is both laughable and enjoyable.  See, they really just needed to build this tiny dam with a one-lane bridge to hold back the drainage of 10 lakes in the Gull Lake Chain, keeping Gull Lake 5 feet higher than normal and preventing the Mississippi River from getting out of hand downstream, but then they confiscate huge chunks of land on either side of it for who knows what reason. 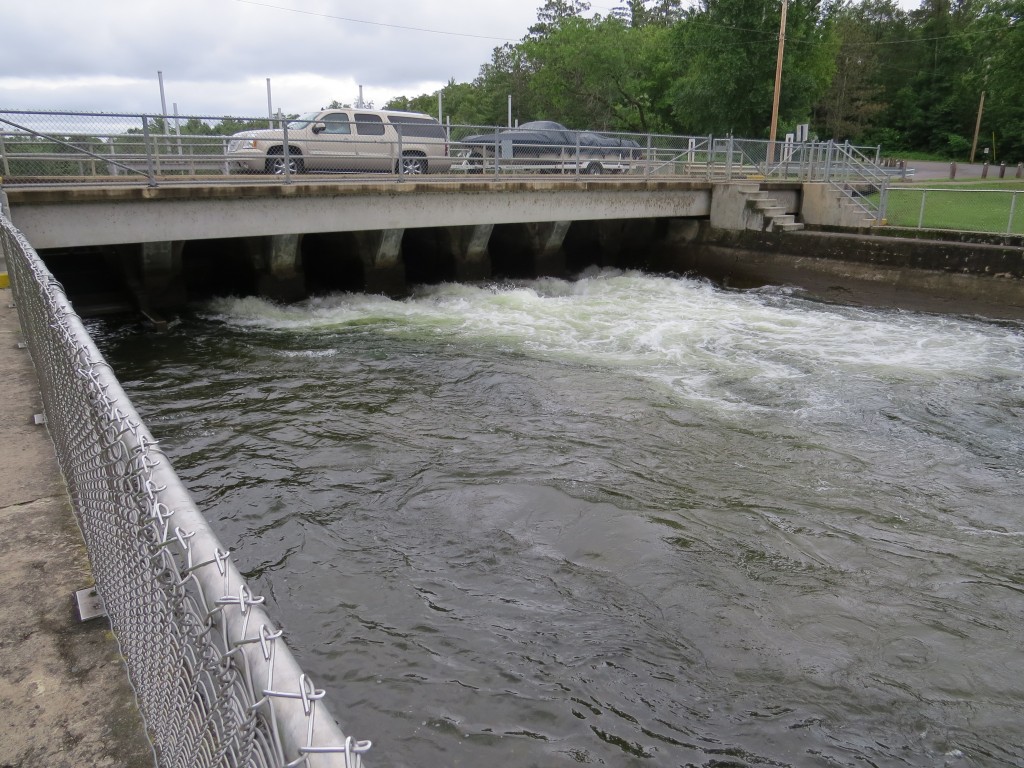 One side of the bridge is the finely engineered campground; the other side is a large point on Gull Lake named Government Point (the engineers must have named it)  with a beach and boat launch and lots of government buildings and this mysterious small structure.  Perhaps a missile silo as part of our defense against Canada, eh? The small size and limit of one would fit that theory since it is just Canada. 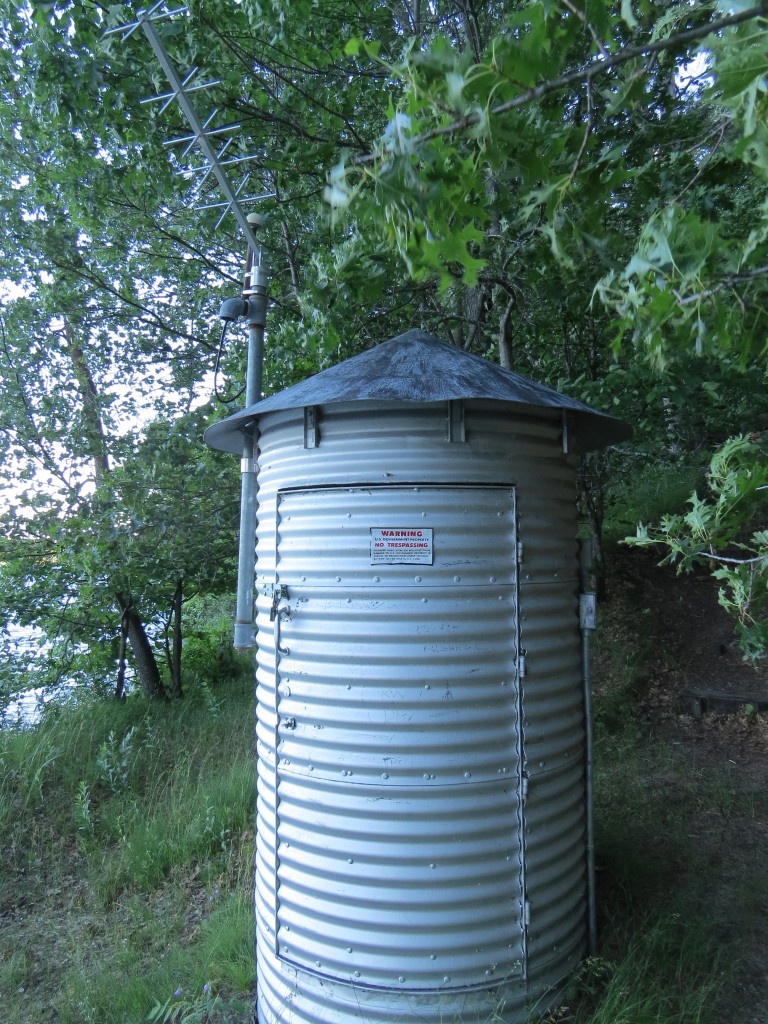 But this blog is about birding and not just about Canadian conspiracy theories.  I was able to get out and do some birding on Government Point.  I had to smile when I proved a law of birding true.  That law is that once a lifer is seen, they show up everywhere. It’s the law that kept me from sweating that I saw a Pine Warbler last week and Evan didn’t see it because I knew the floodgates would open up for the Pines after that first sighting.  Yep, it turns out those Army engineers even designed a perfect territory for this guy. 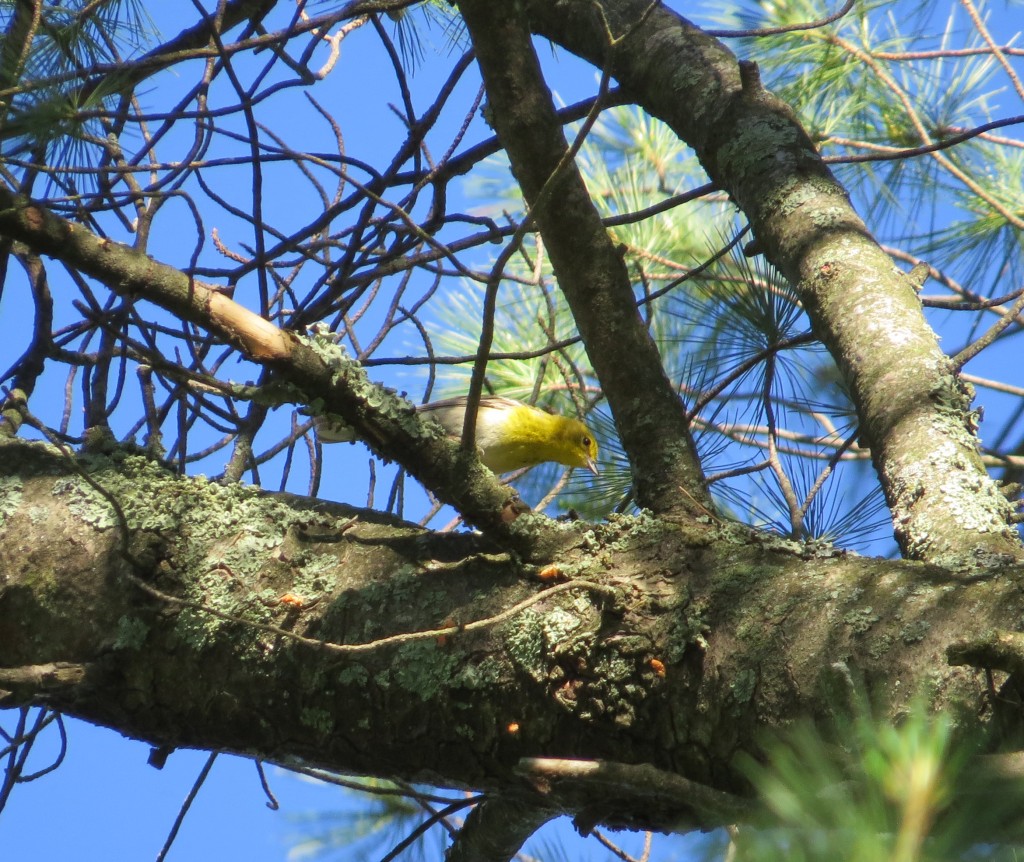 This particular warbler has class, choosing the nicest, tallest White Pine right by those government buildings to call his home. 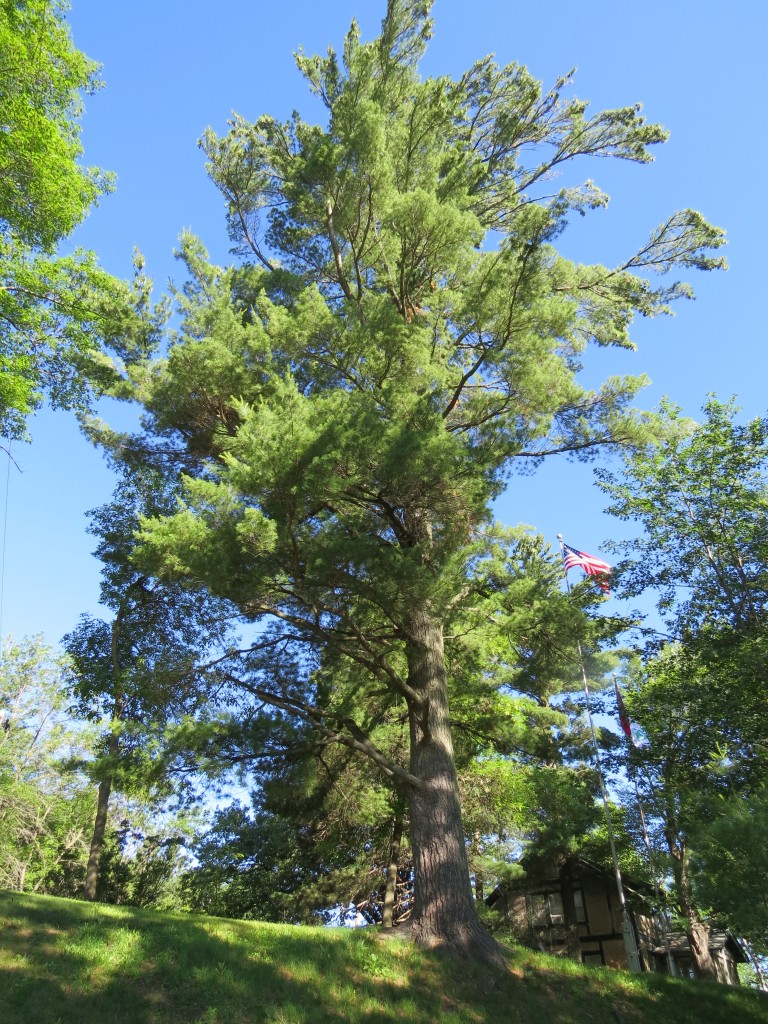 After this discovery on my first morning birding walk, I was eager to get back to share this news with Evan.  The warbler was singing on territory and wasn’t going anywhere, and it was a short hike from the camper.  Evan, indeed, wanted to come see it along with Marin and cousin Hannah.  Before we got there I played the song for the kids so they could listen for it on the way there.  Once we got within 200 yards of the location, the kids were excitedly exclaiming that they heard it.  Fast learners! Then the challenge was to spot it. 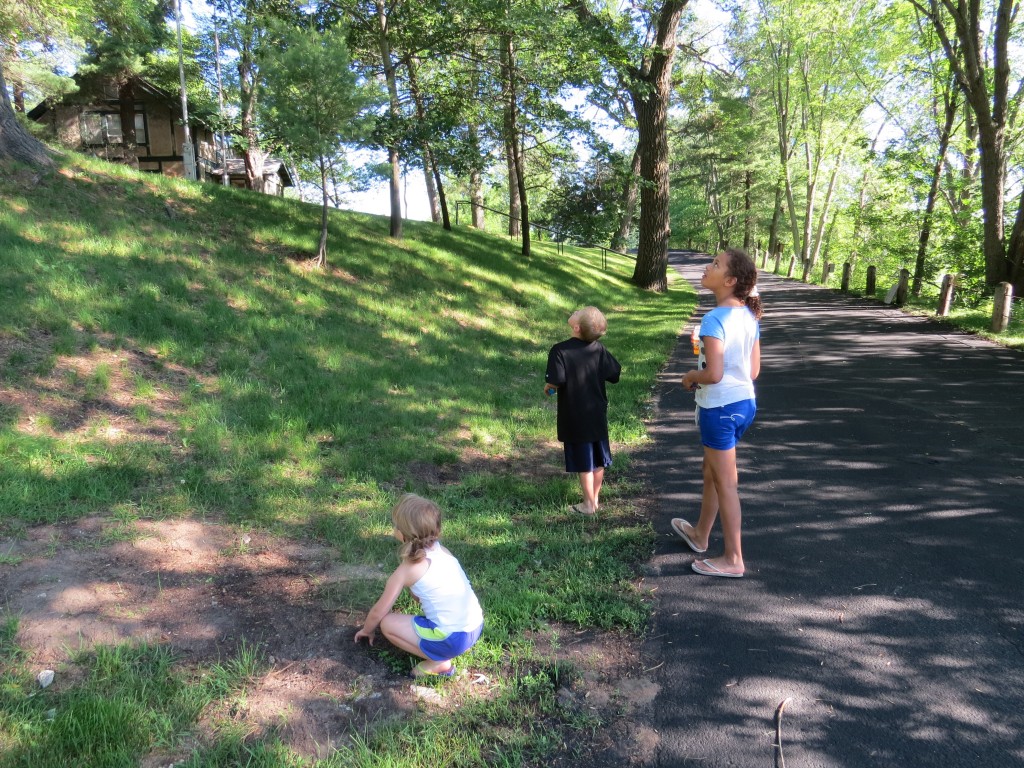 Many will deride the Pine Warbler, citing its drabness.  But I like it.  Maybe that’s because it took me so long to find it – kind of like the girl who played hard-to-get phenomenon.  Or maybe that’s because it is better at picking habitat than the other warblers.  Our majestic Red and White Pines are beautiful whether alone or in large stands.  Good choice, Mr. Pine. 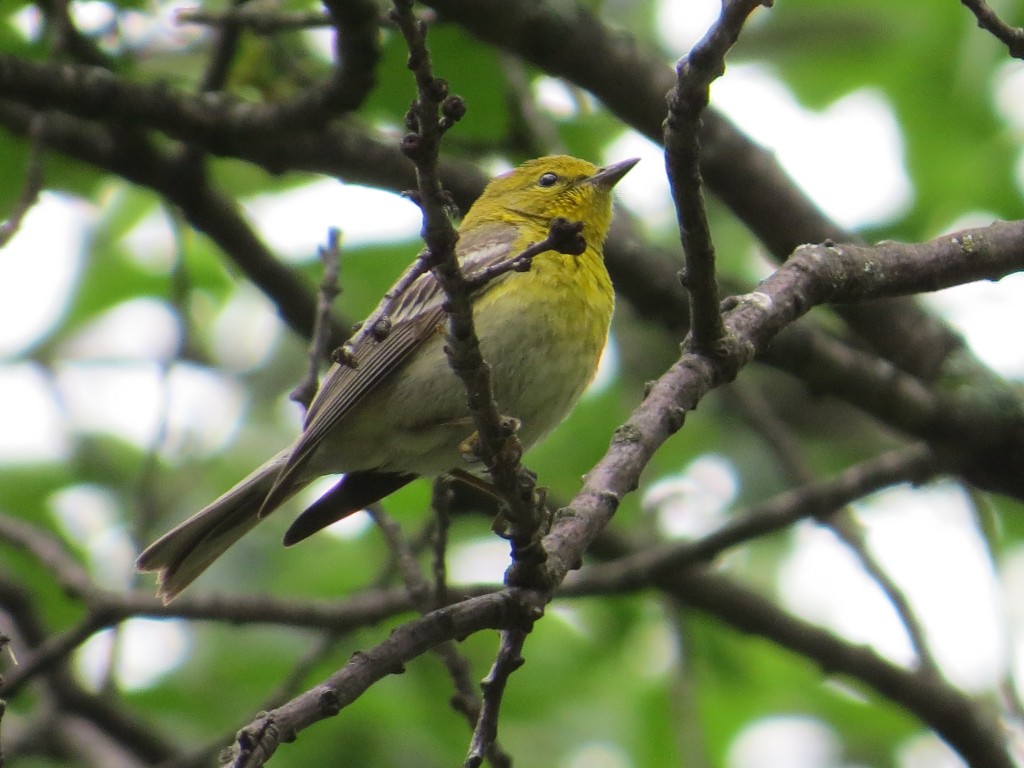 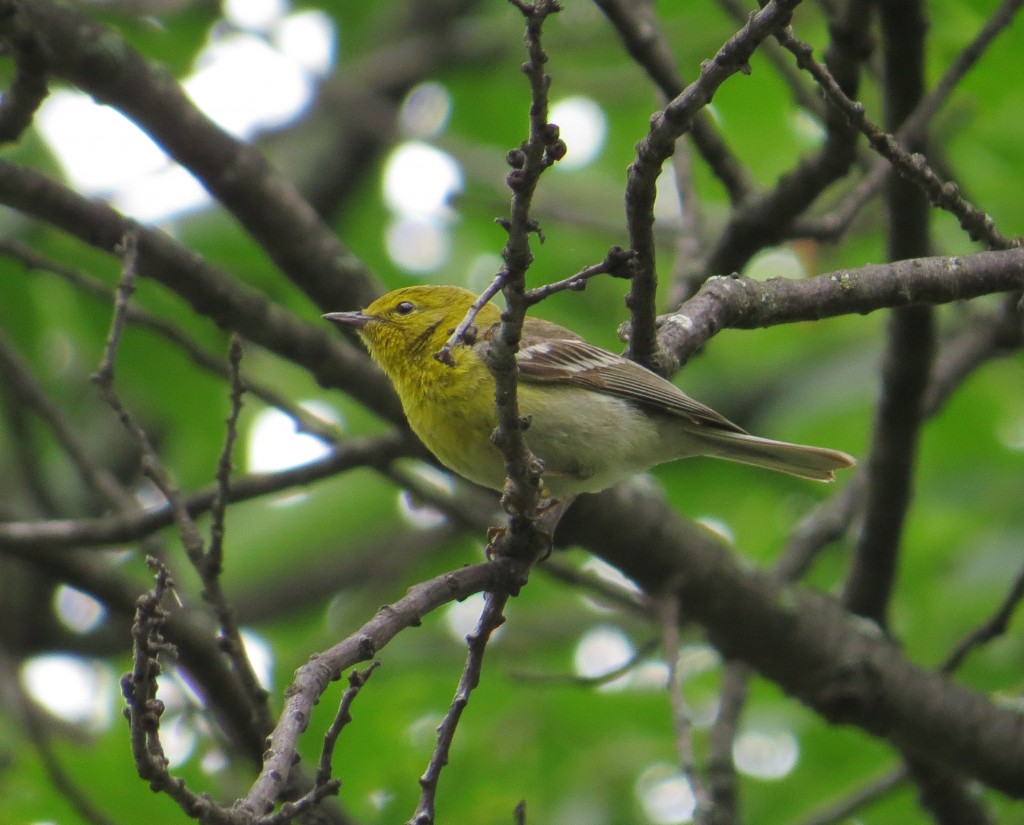 I spent a lot of time with this warbler observing and photographing it.  When there is no pressure to find a life bird, I really enjoy spending time watching and photographing a particular species that I enjoy.  It was fun to watch this guy as he sang his heart out constantly, shaking his whole body with each song.  I really like their trilling song which is a higher, sweeter version of a Chipping Sparrow’s song.

My birding was pretty relaxed overall.  I mostly photographed birds that presented photo ops, and I got pictures of birds I’ve never “shot” before.  Many, like this Turkey Vulture, were practically begging to have their photo taken. 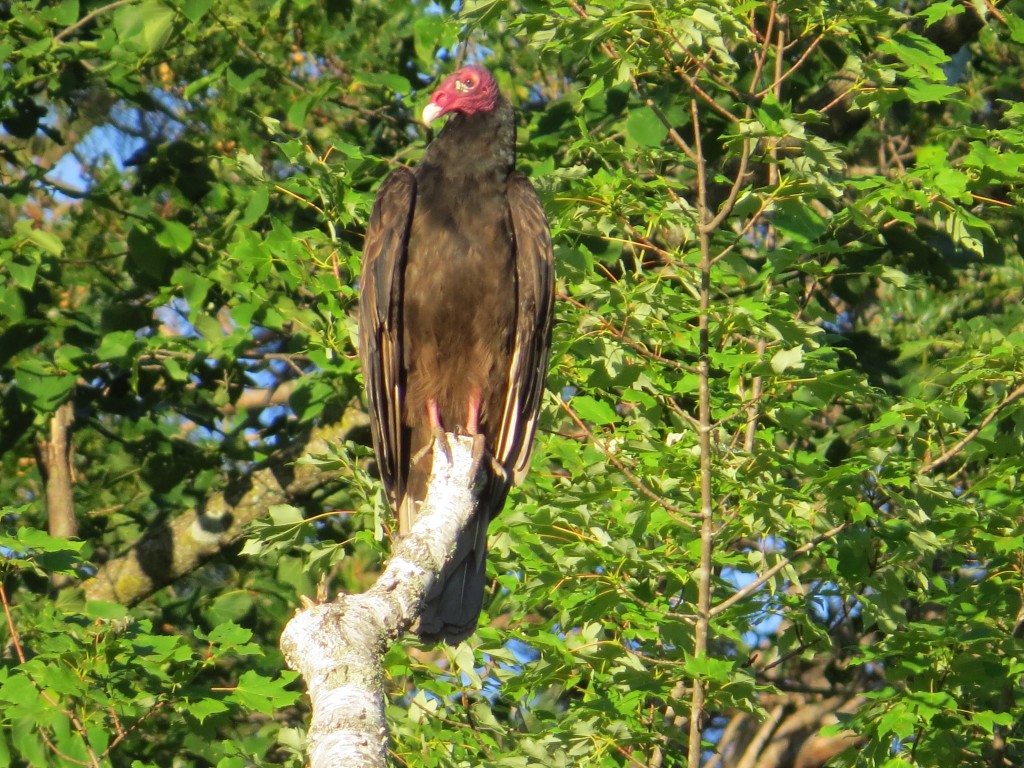 I even relented and took my first ever American Robin picture.  Probably my last too. 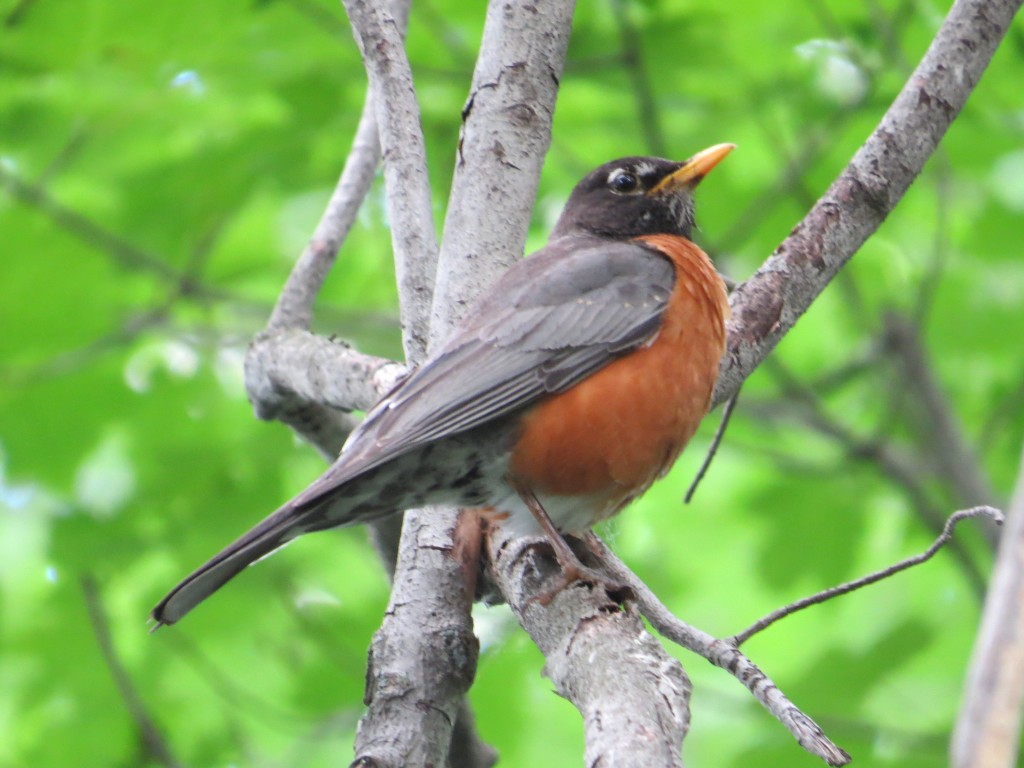 I saw several Yellow-bellied Sapsuckers.  My best look came when I didn’t have a camera and one was on a tree just a couple feet in front of my face.  I had a similar experience with a Veery that came waltzing through the campsite while I was having coffee with my father-in-law. 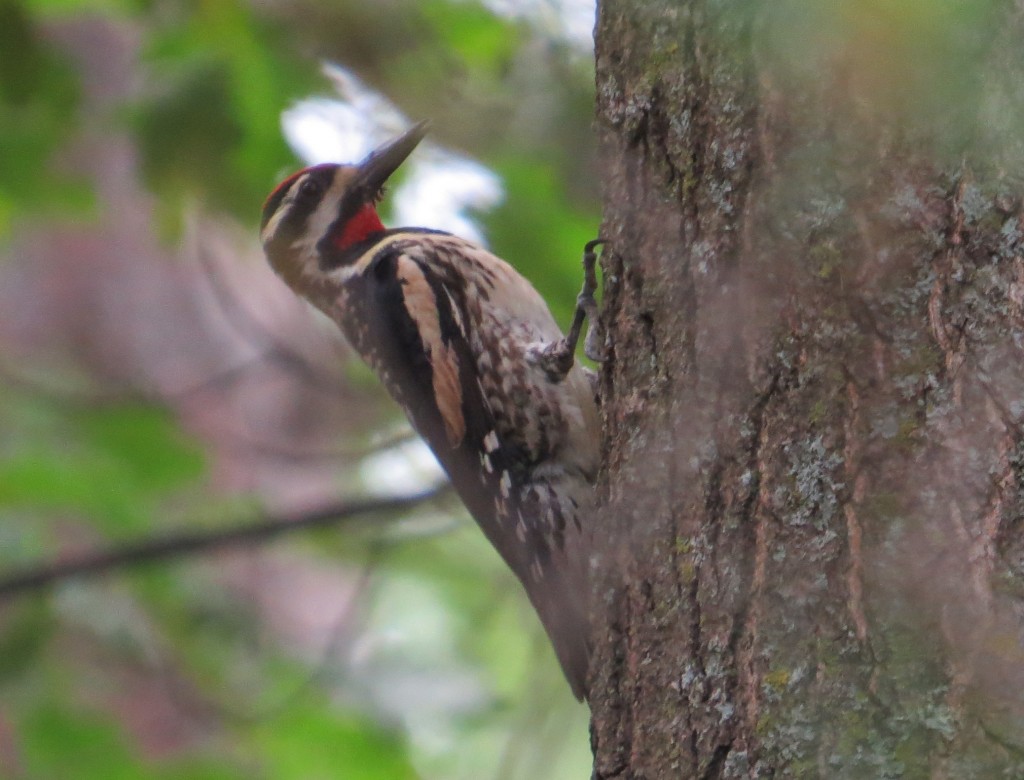 A loud drumming on a bird house at one point alerted me to this female Pileated Woodpecker. 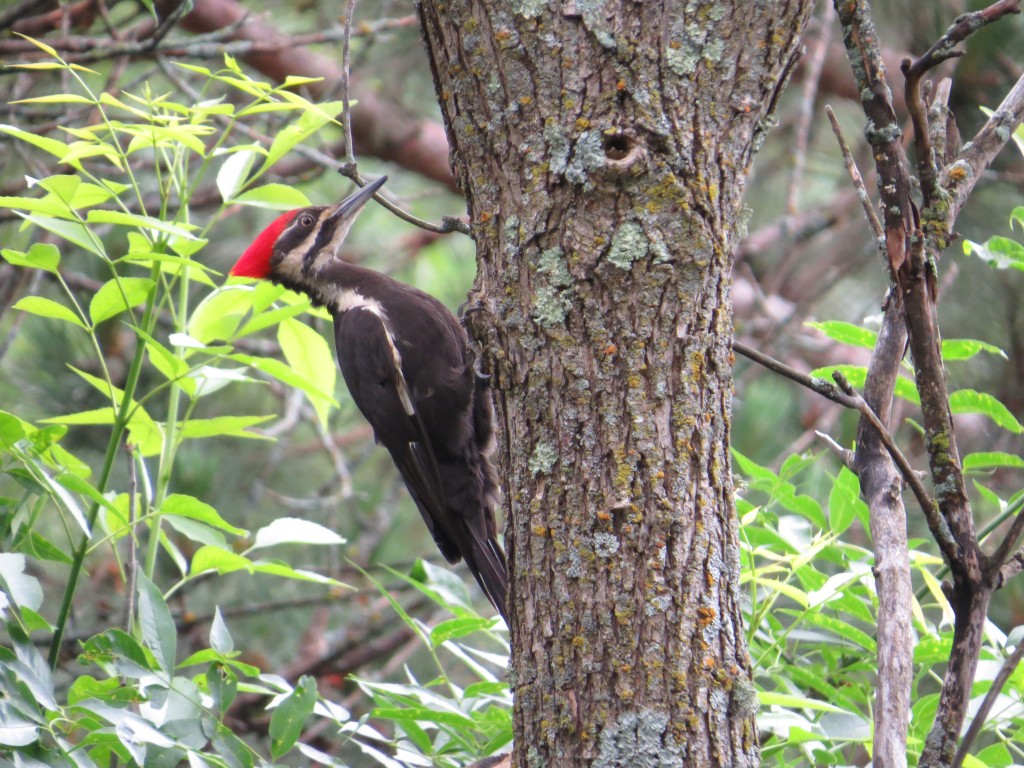 I also finally got a photo of an Eastern Phoebe. 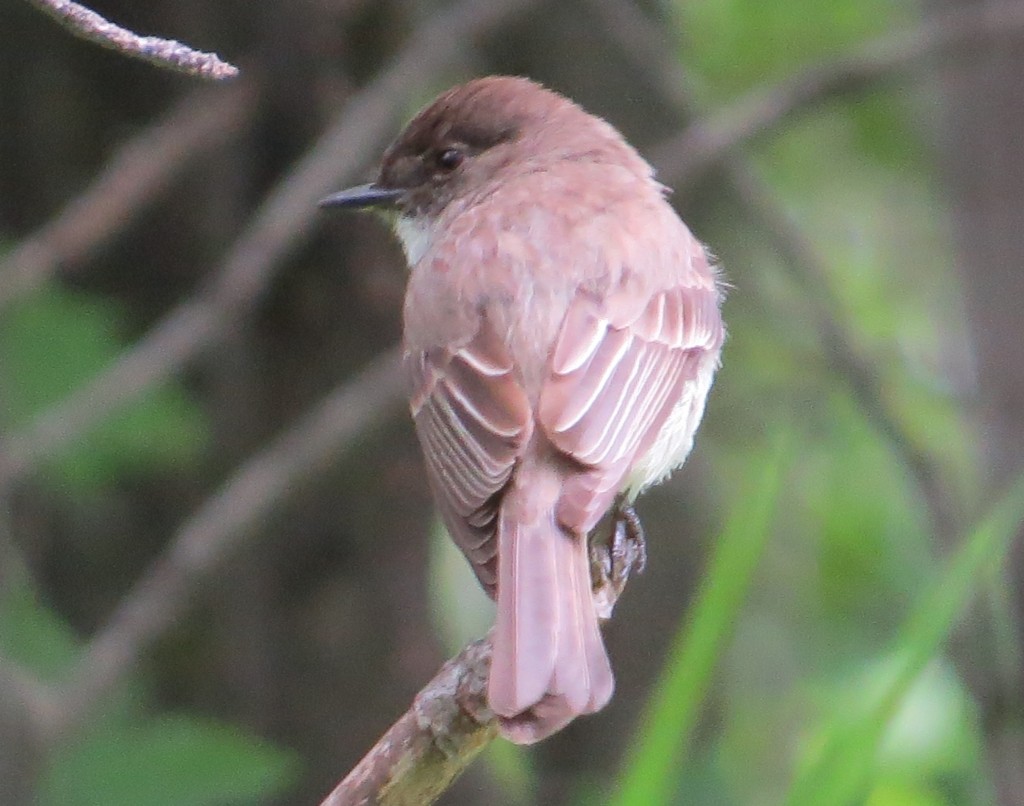 Eastern Phoebe – purported by some to be the third-best Phoebe

And a relatively common bird during migration that was fun to see and hear on territory was the Yellow-rumped Warbler. 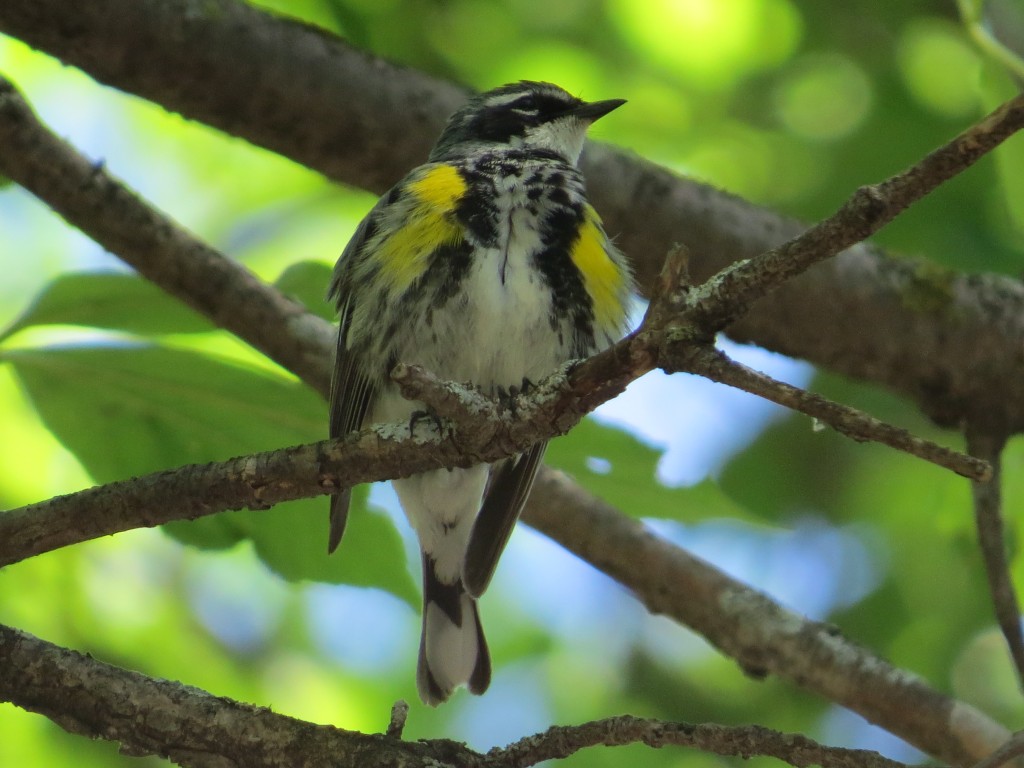 While I did some casual birding on this trip, Evan was moving on to other scientific pursuits, like marine biology, studying various snail shells and the invasive Zebra Mussels. 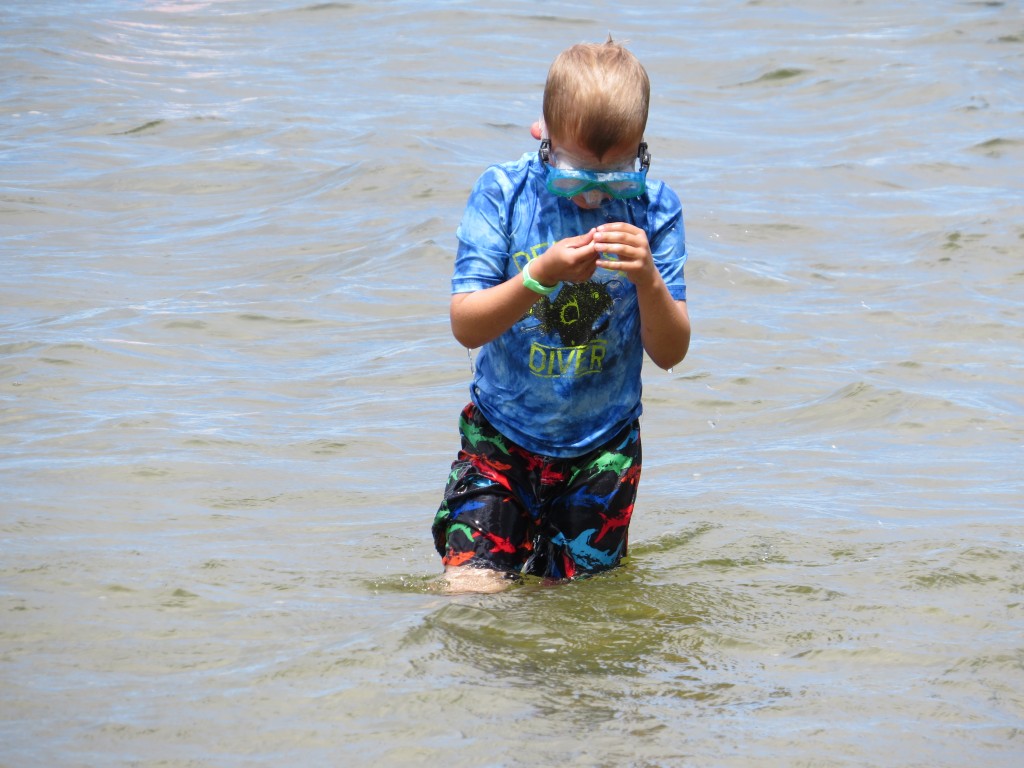 Though I spent some time just enjoying and photographing birds, I did make one quest to find a lifer.  The Wood Thrush has eluded me thus far.  A local birder recommended hiking the trails at the Northland Arboretum right in the city of Brainerd.  With 12 miles of trails through various types of forest it sounded promising. 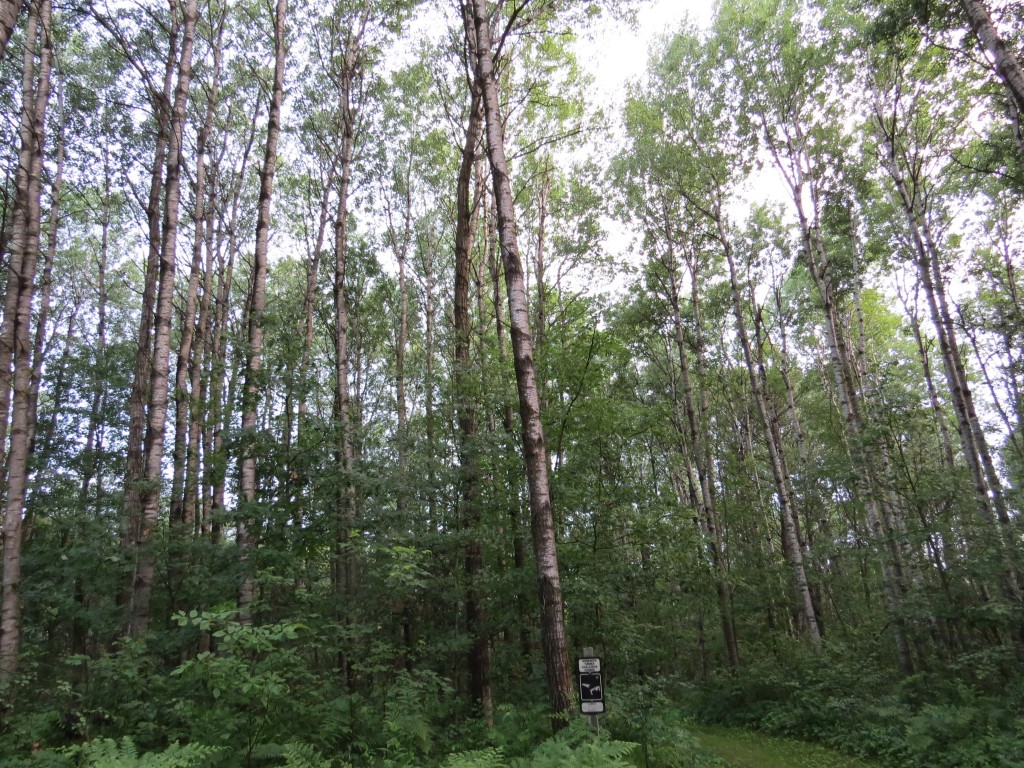 The mosquitoes were incredibly fierce and abundant, though.  I was wearing long sleeves, pants, and the hood from my sweatshirt.  Even with repellant on the few square inches of exposed skin, I was getting destroyed.  I didn’t know what I’d do if I had to stop walking to look at a bird.  But then I found out what I’d do when I recognized the song of a former nemesis bird, the Blue-headed Vireo!  Once again that old birding law proved true. I endured countless bites as I tried so hard to get a photo of this bird.  It’s such a looker and one of my favorites, yet I couldn’t do it justice.  But I didn’t care too much because self-preservation was taking over.  I had a literal cloud of mosquitoes around me and had to keep moving.   My face was already swollen to twice its normal size. 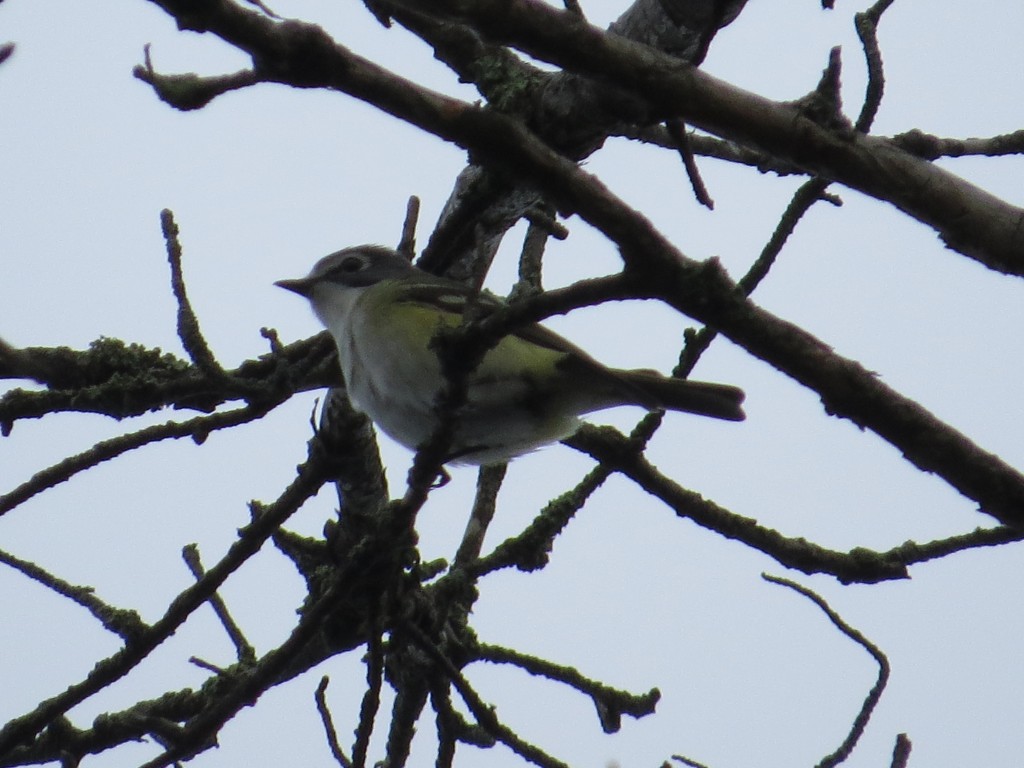 I had one other good sighting at the Arboretum that I identified after-the-fact when looking at photos.  It turns out a high-flying raptor that went overhead was a Peregrine Falcon!

I also got to see a Brown Thrasher, but I could not turn up a Wood Thrush either by sight or sound.  As I was nearing the end of my walk and going by a wetland, I saw this pile of baby Mallards, literally and photographically crushable as they were just 6 inches off the path. 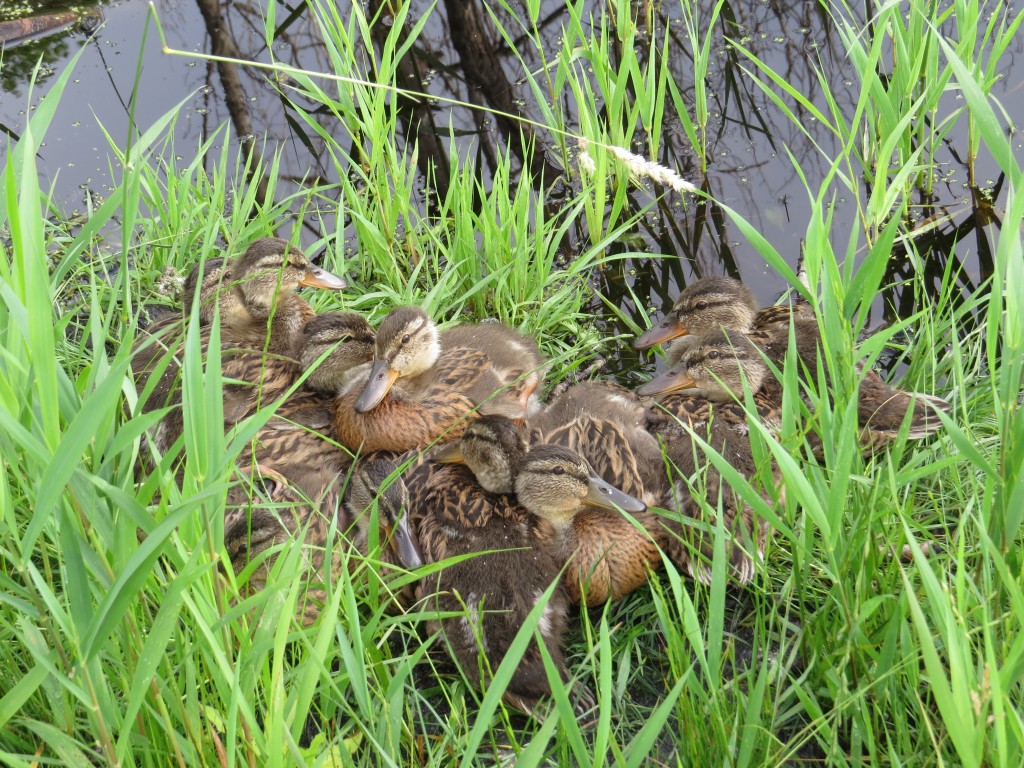 Seeing this mass of Mallard babes reminded me of one of those contests where you try to guess how many marbles are in the jar.  But if we were playing that game on the blog, you’d all lose because Momma Mallard had Momma’s Boy off to the side, throwing off the count.  Apparently she wasn’t too concerned that the bulk of her children were one stray bike tire from being obliterated. 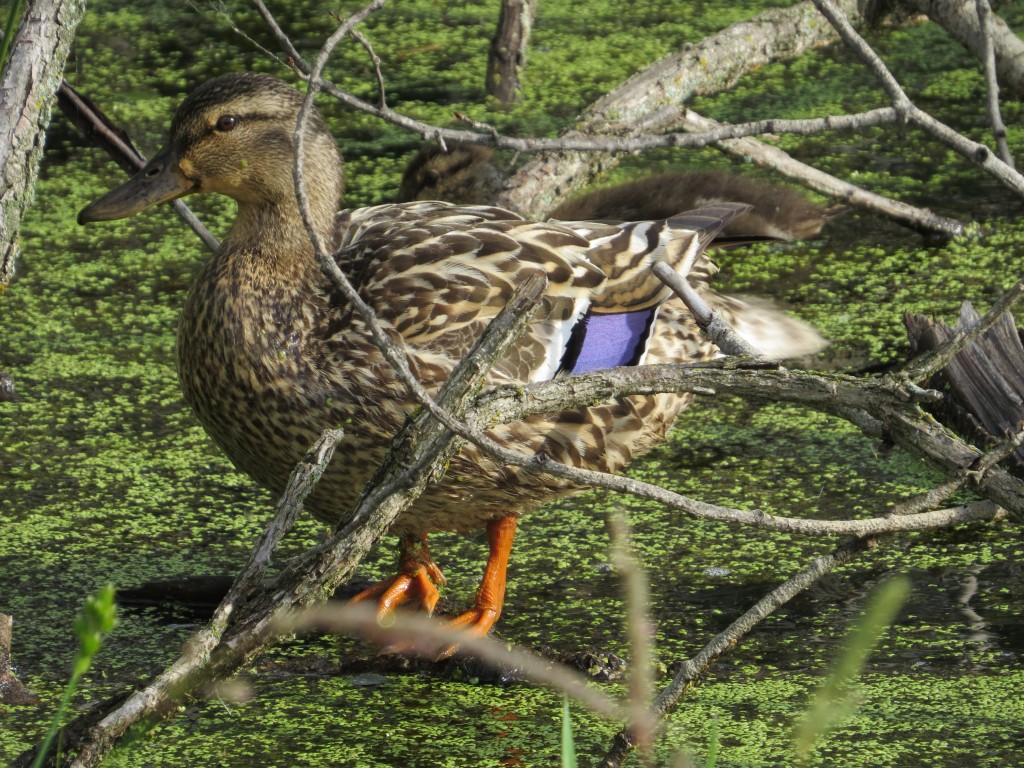 Hen Mallard with her favorite child

So, there would be no Wood Thrush.  The hunt goes on.  I may have to continue the fight back home.  Overall, though, it was some good side-birding on a camping trip.  A lifer for Evan and some good looks at fun birds is nothing to sneeze at.