This story pre-dates the Afton State Park post.  Because Evan’s teacher likes to show the class the blog on the SmartBoard, especially after one of Evan’s birding trips, I was under pressure to get that Afton story written the night we got home so Evan could have it ready for his class to see the next day.  Furthernmore, there has been a lot of birding action lately and the posts are getting backlogged. So this post was delayed and occurred back on June 3rd.

Since Evan and Melissa were still in school and I’d been hanging out with Marin, I thought it would be a good opportunity to go to the Cottonwood sewage ponds to try to photograph some of the Blue Grosbeaks that my young birder friend, Garrett, had found down there.  Since it was not a life bird, I knew Evan wouldn’t care if I did this kind of trip without him. Blue Grosbeaks are a significant bird in Minnesota.  They breed in the very, very southwestern corner of the state.  Blue Mounds State Park near Luverne is the most reliable place to see them, which is where we got our lifer last year.  Occasionally Blue Grosbeaks are found further north and east like these Cottonwood birds.  They are almost always found in gravel pits or other equivalent brushy areas.  Their rarity and their beauty make this bird a fun find.

As I become familiar with all kinds of birding haunts, Marin is becoming familiar with a plethora of city parks.  If it’s just me and her, I try to make sure there’s something fun for her to do.  So on the way to Cottonwood we stopped in Maynard, and I couldn’t find a city park!  Since MACCRAY school was already done for the year, we stopped at the elementary school where she was able to get a playground fix before Cottonwood.

Cottonwood was pretty straightforward; the Blue Grosbeaks were isolated on a lone, brushy hill next to the path into the ponds.  This hill is maybe one hundred yards long and a hundred feet wide.  Garrett told me the Grosbeaks like to hang out in the small trees on the back side of the hill.  It was pretty muddy, so I was going to let her stay in the van while I hopped out to check out the hill.  Then Marin remembered that her mud boots were in the van, part of the cache of random things we brought home from daycare at the end of the year.  So she was eager to put them on and join me for a little walk.  That is, until she spotted a bug.  Marin has an uncontrollable, irrational fear of bugs that causes her to scream even if they are not bothering her.  It makes any outdoor activity very challenging.  So she went to the car while I continued my search. But then I heard screams from inside the car.  There was a lone fly that she just could not tolerate.  Despite all the insect drama, I was able to find one male Blue Grosbeak and get some photos.  Garrett had seen two males and a female the week prior. 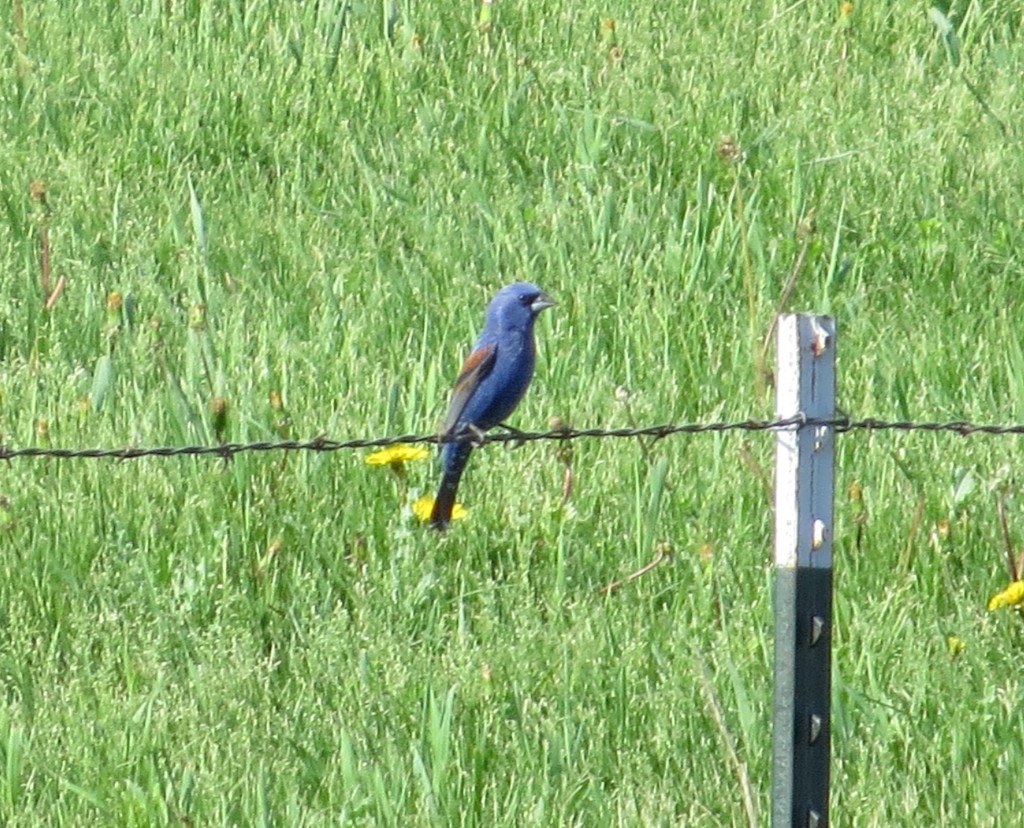 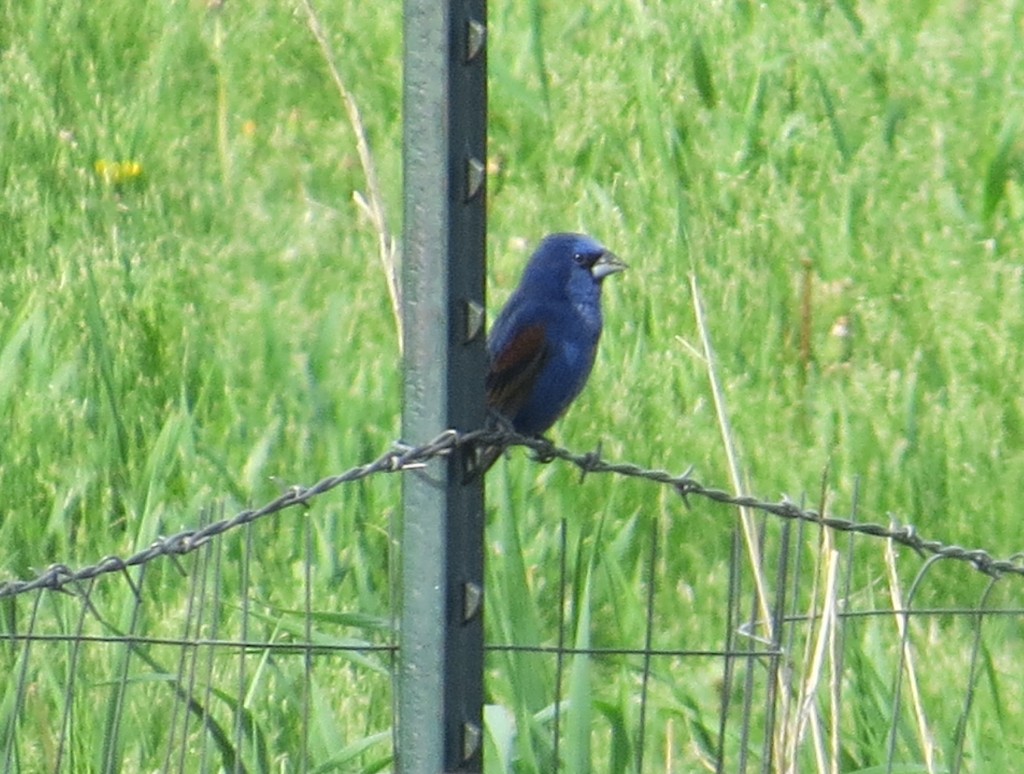 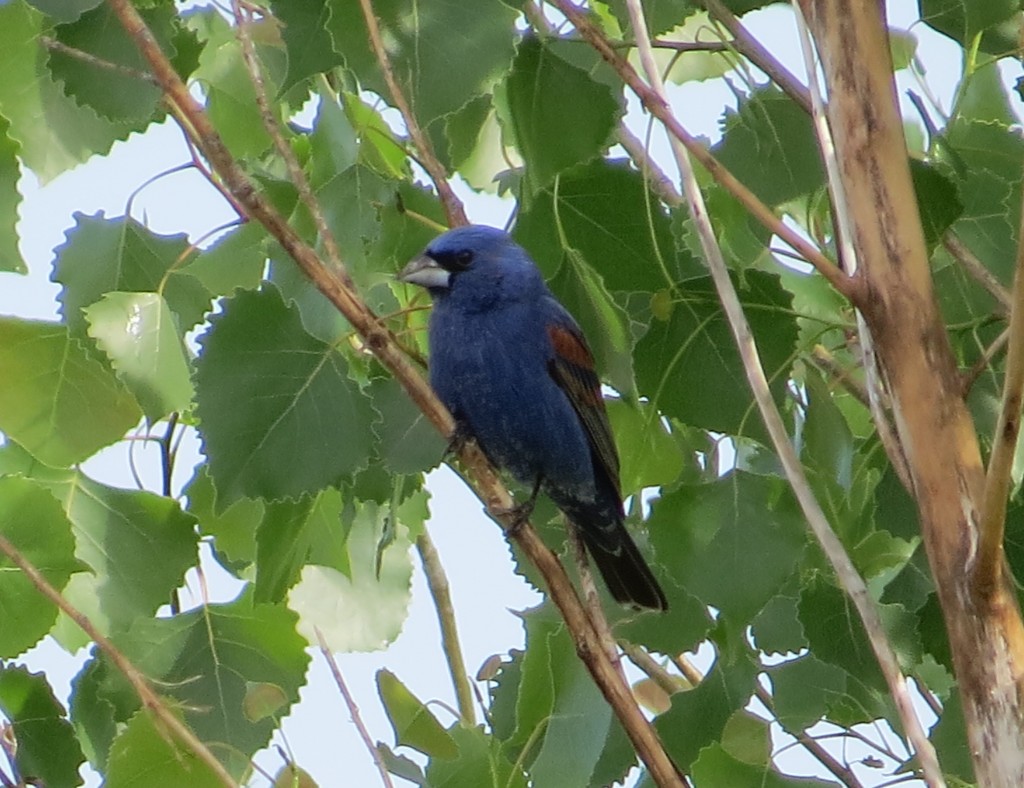 Such a fun bird to see!  As I photographed the bird on the sewage pond fence, the city worker who was mowing drove right up to where the bird was and scared it away.  Nuts. Then he shut off his mower, and I thought ‘Oh, great. Here we go again.  I wonder what he’s going to accuse me of.’  Instead of a suspicious inquiry, though, he asked if we were birdwatchers and then told me I should go ahead and drive on the dikes around the sewage ponds to show my daughter the baby Canada Geese.  You gotta love the Cottonwood sewage ponds where not only are there no gates keeping you out, but the city worker encourages you to come check see all that their ponds have to offer.  The geese are another story; I actually have a very strong dislike for the species.  Undoubtedly it originates from my younger years of shoveling loads of goose poop off our beach, lawn, and docks whenever they would visit the resort.  It’s kind of funny how when people see us out birding they ask us if we are looking at geese or want to know where geese are.  I always appreciate the friendliness and offer to help, but there is no way I can quash their enthusiasm and tell them how I feel about this ubiquitous bird. So I thank them and tell them I’m just checking out all the birds.

As far as the stunning Blue Grosbeak was concerned, though, I would have loved to spend more time looking for it and photographing it, but we had another date with a park in Cottonwood.  The date was shortlived, however, because of a screaming fit that resulted from a fly on the slide.

After the short park visit we were off to check out Lone Tree Lake just a couple miles northwest of Cottonwood.  Garrett suggested it as a spot for seeing nesting Upland Sandpipers. For a young man, Garrett sure knows his birds and more importantly, he knows what birds are good.  I’m glad I discovered him on eBird as he isn’t really connected and known in the other big birding circles – a problem that I’m helping to rectify, especially since he seems to be a lone birder reporting from this dynamic outpost where all kinds of amazing birds show up.

As we drove along looking for Upland Sandpipers, we saw a couple Bobolinks and other prairie birds. 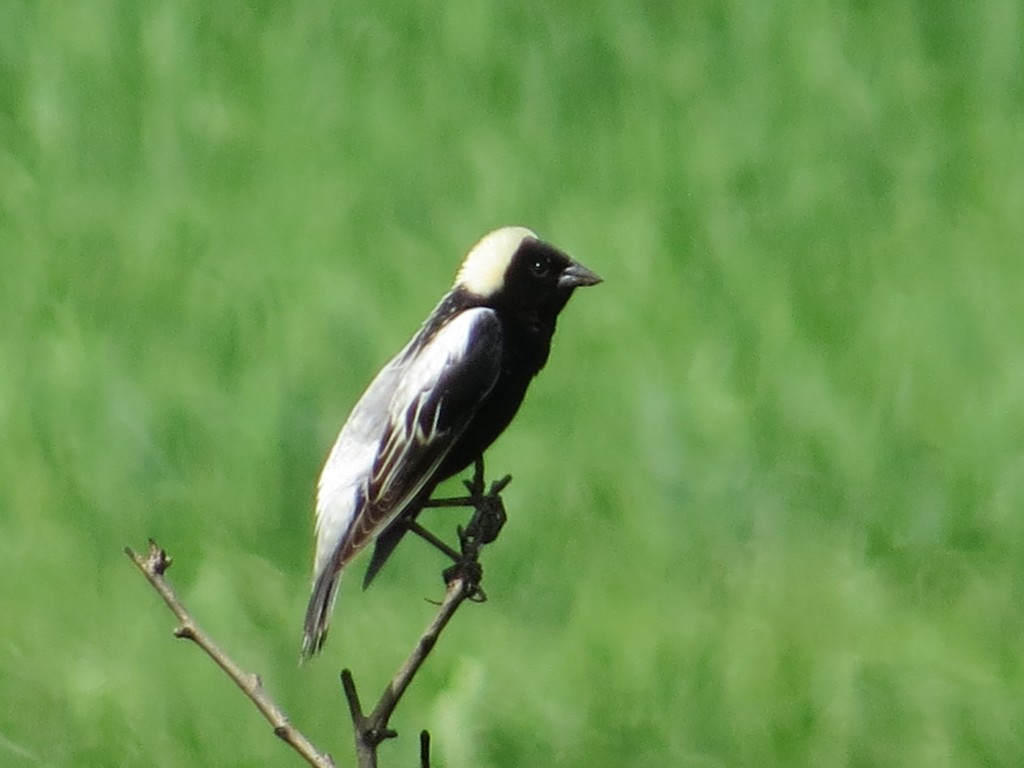 Eventually I found one of the Upland Sandpipers acting uplandy way up in a hayfield and far from the lake and the road for that matter. 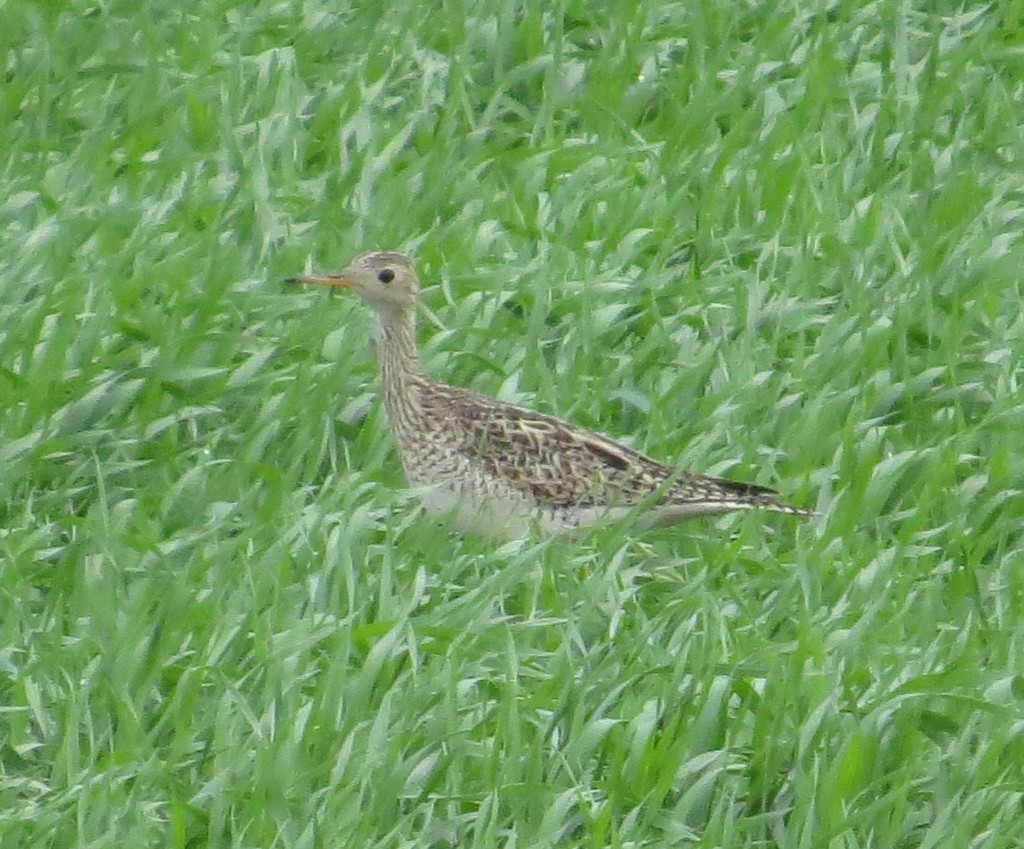 Not a bad morning of prairie birding and park hopping.  It was time to meander home and make it to Evan’s school on time to pick him up.  Marin fell dead asleep on the way, so I had a quiet drive through the scenic Minnesota River Valley in Renville County. After her two hour nap was over we stopped at the DQ in Olivia for a late lunch and then got to Evan’s school just in time to get him.  It was a fun, successful day.

2 thoughts on “Back to Cottonwood for some Blue Grosbeak Action”