So it seems I wrote that previous blog post a tad prematurely.  Yesterday I was fully living my life like migration was over – I slept in, scrubbed the deck, cleaned out two cars, and was gearing up to take the kids fishing in the afternoon.  I was in full-on get ready for summer mode. Then I got a midday email from Randy who had checked out Carlson’s Dairy, an annually flooded field near a local dairy farm that is the go-to spot for shorebirds in our county.  Randy said the place was hopping with about 90 peeps, 10 phalaropes, and 10 Stilt Sandpipers.  A Wilson’s Phalarope would have been a life bird for Evan and a county bird for me, and the Stilt would have been new for both of us.

Though Evan had been asking repeatedly all morning when we were going fishing, I asked him if he wanted to make a quick run out to Carlson’s first.  When he heard about those phalaropes, he was in.  It was quite a sore spot for him last year when I got to see them without him.

We got out there and found the place full of tiny shorebirds. 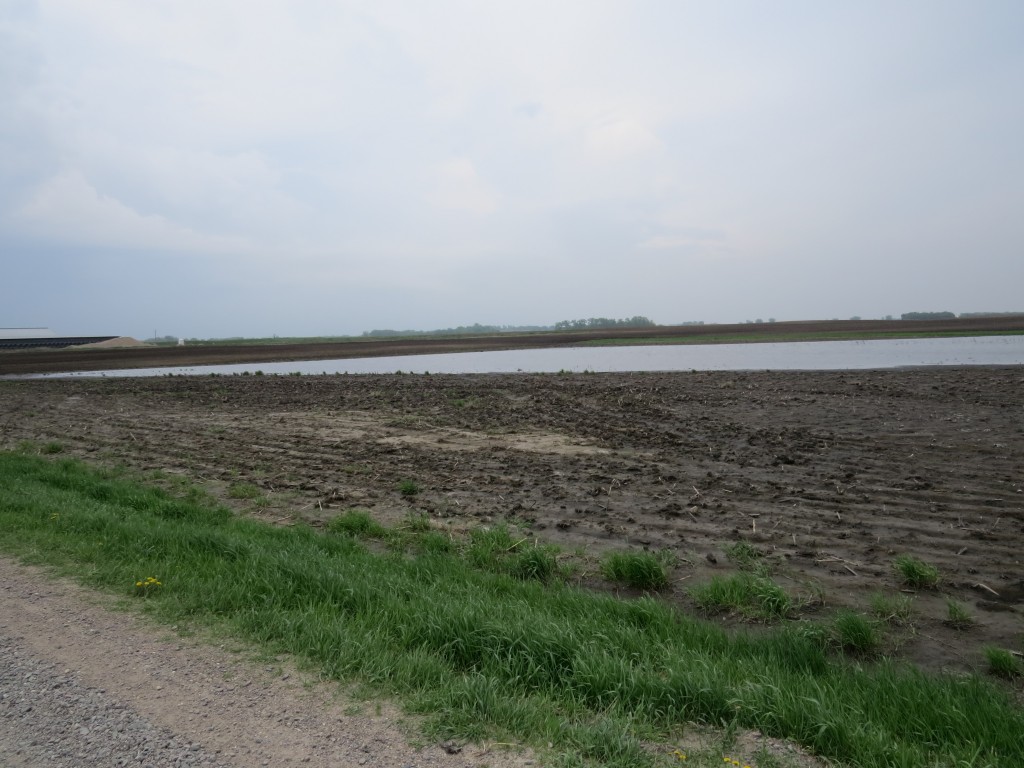 All I could see were the peeps who are no bigger than sparrows.  There were tons of them.  It took my awhile but I finally located a phalarope.  I certainly didn’t see 10.  I zoomed in on it and showed it to Evan on the LCD.  He was excited to get his Wilson’s Phalarope but then wanted to go right away.  Birding doesn’t really compare to fishing to a 7-year-old.  So I snapped a picture of this phalarope, just assuming it was a Wilson’s, the most likely species.  Then I looked a little closer at the LCD and realized it was a male Red-necked Phalarope in breeding plumage!  This was not a life bird as we saw a very drab version last August at the Atwater sewage ponds. 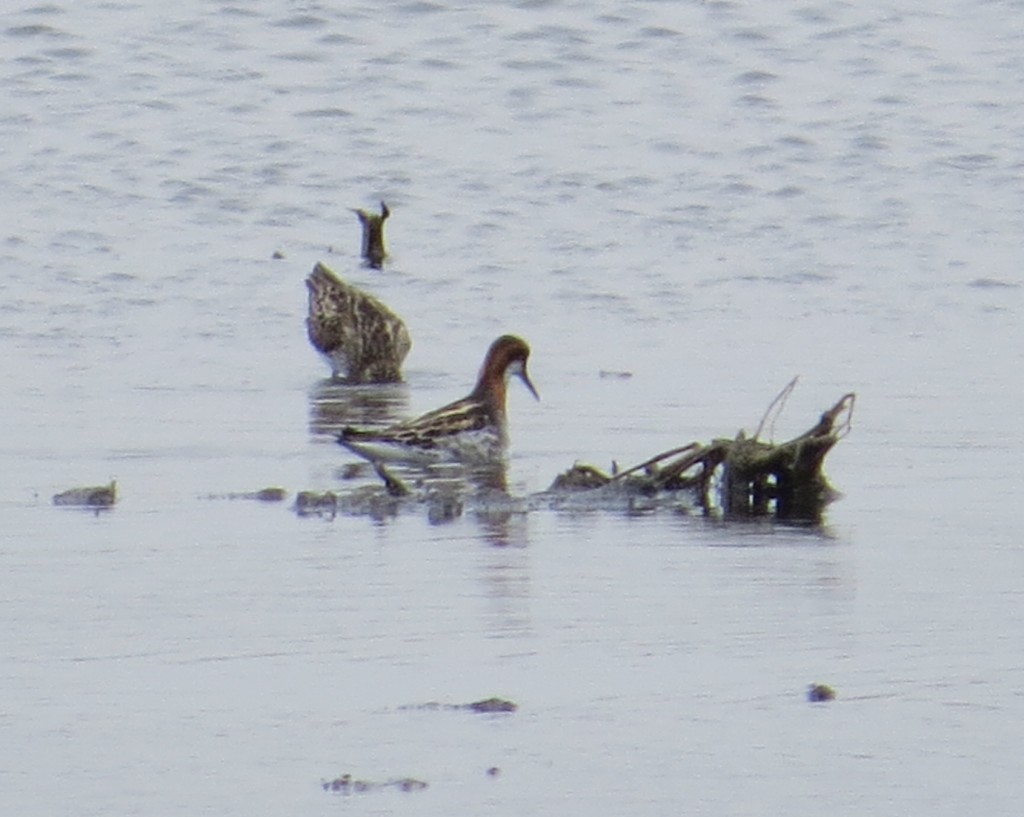 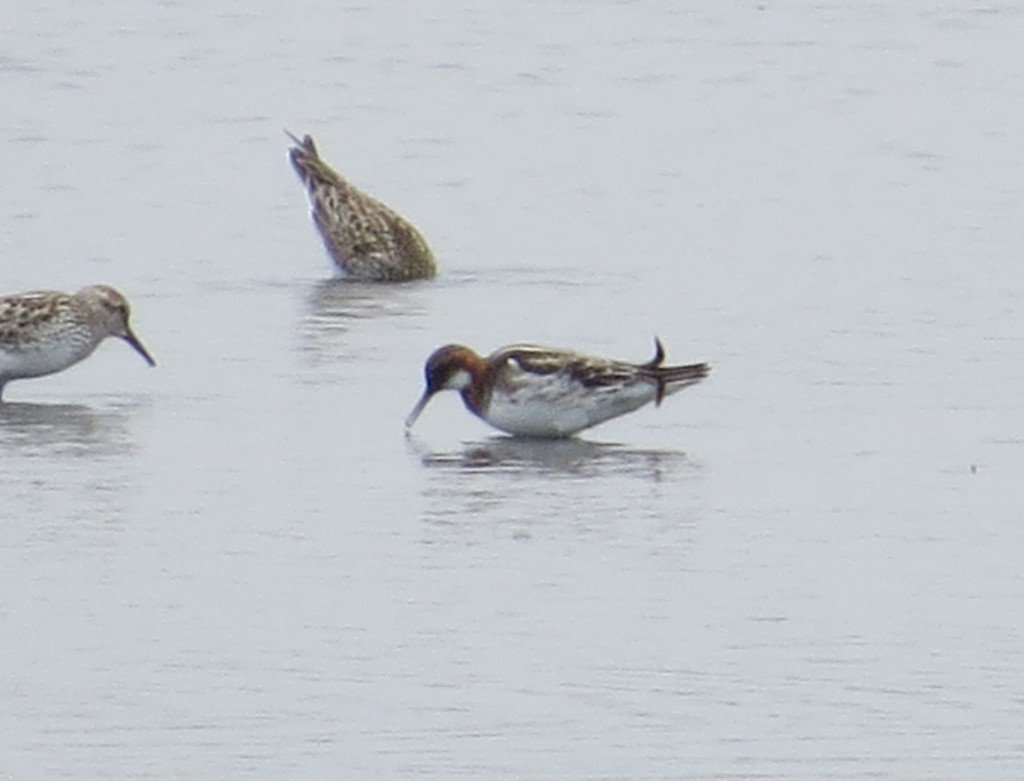 Now we had to stay for a bit because we hadn’t even gotten one of the two potential lifers there.  I walked on the road to the view the north end of this pond, and I finally found the cache of phalaropes.  These were definitely Wilson’s, so Evan got his life bird after all. 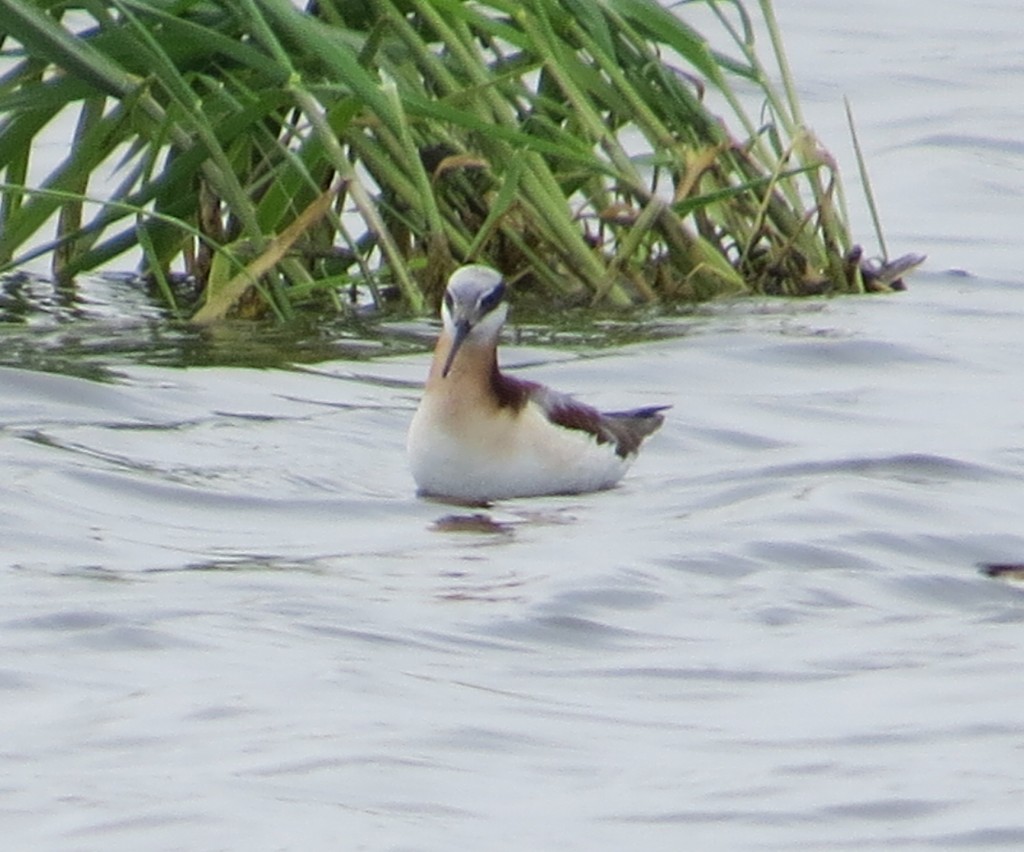 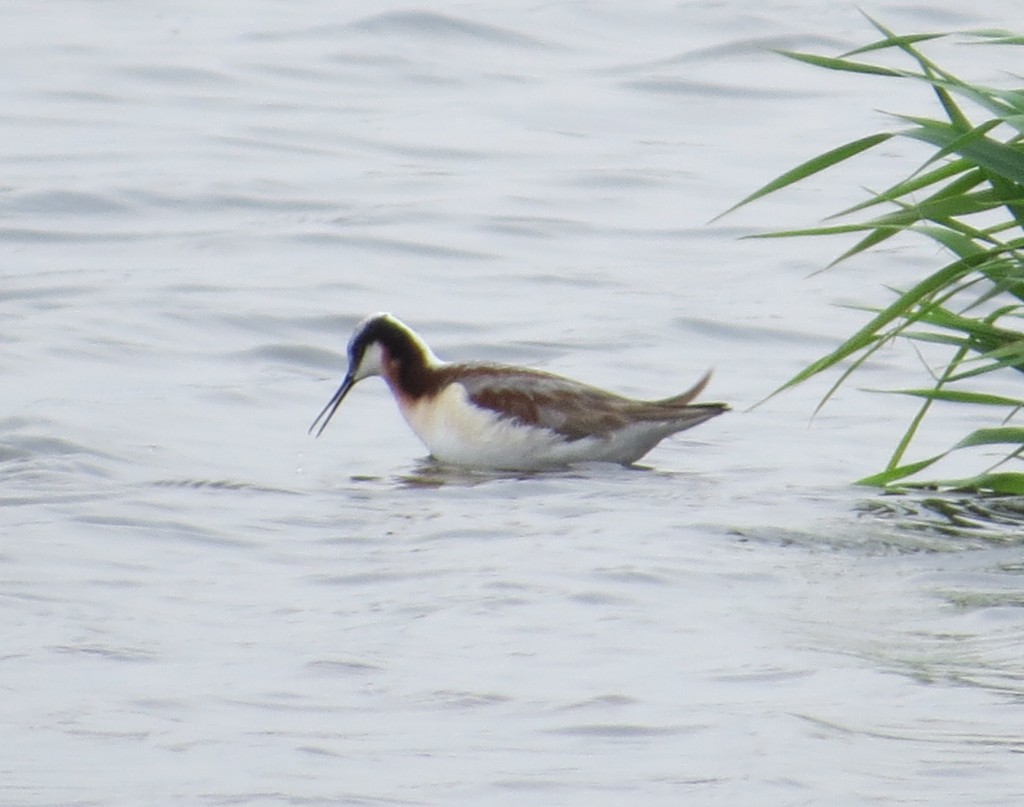 Then I spied some chunkier looking shorebirds that were bigger than the peeps but stockier than the phalaropes.  The cloudy skies, distance, and strong wind buffetting my camera lens made it difficult to tell what they were.  Were these our Stilt Sandpipers or a dowitcher of some sort?  After looking back at my photos I could clearly see they were our Stilt lifers. It was interesting to read in the field guide, though, that they are compared to dowitchers in their behavior. 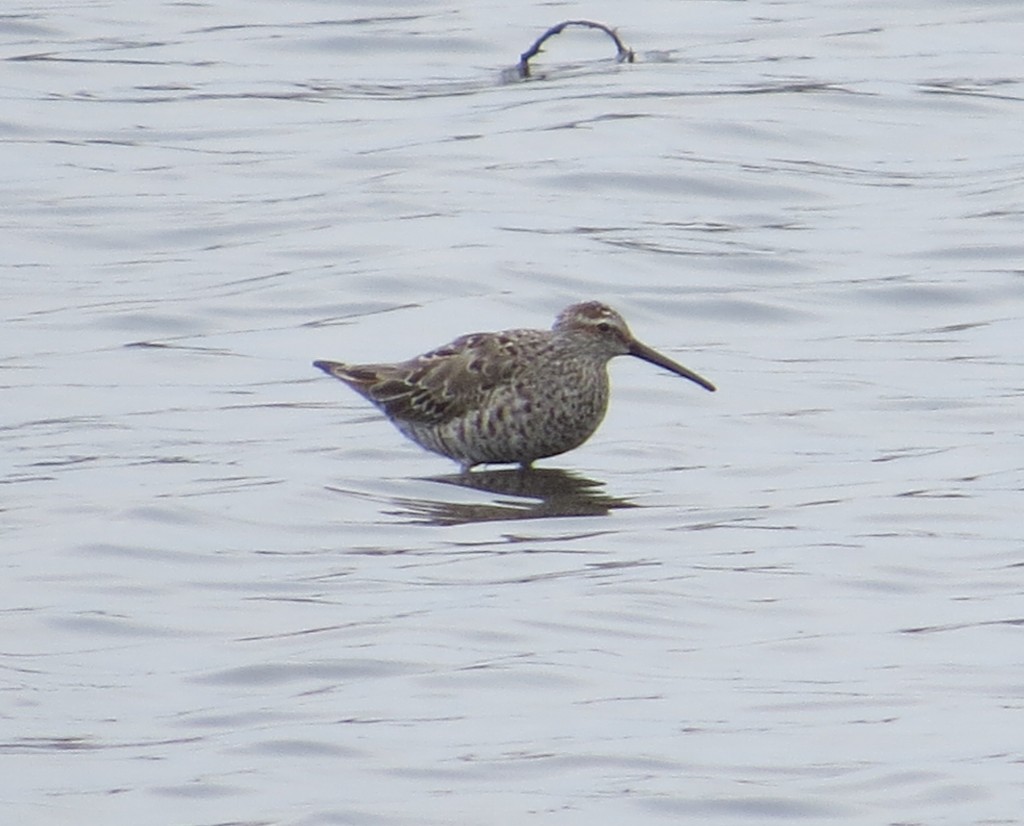 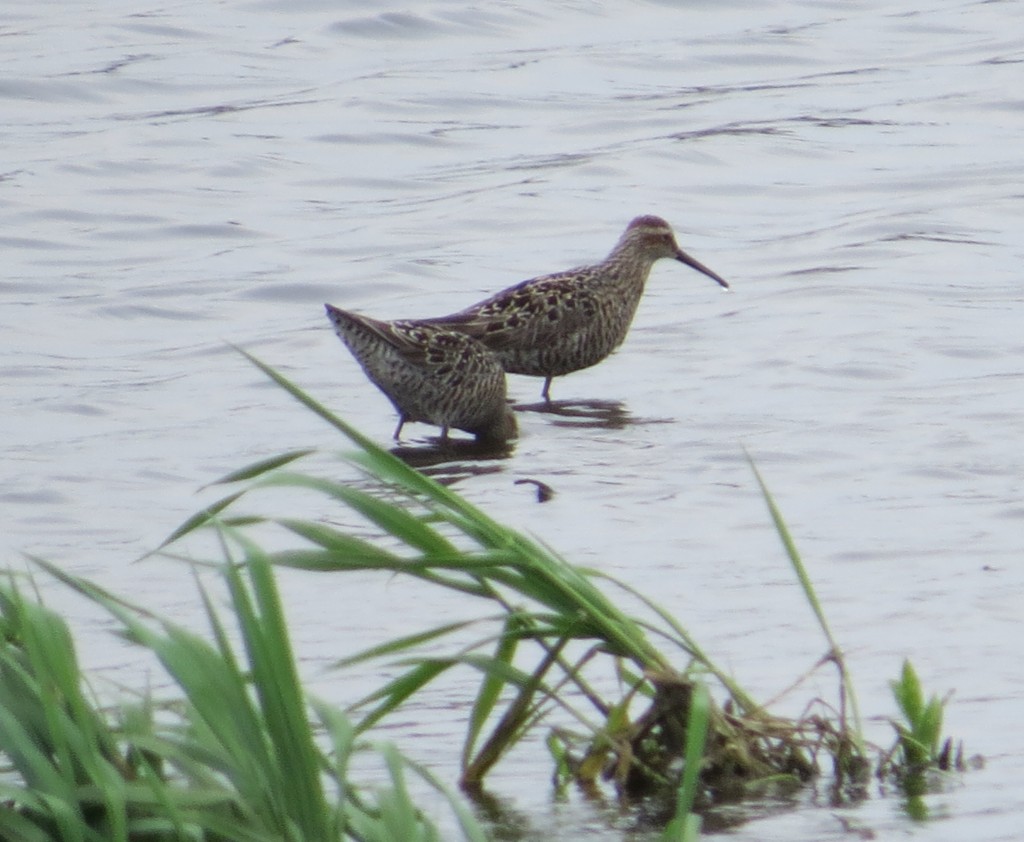 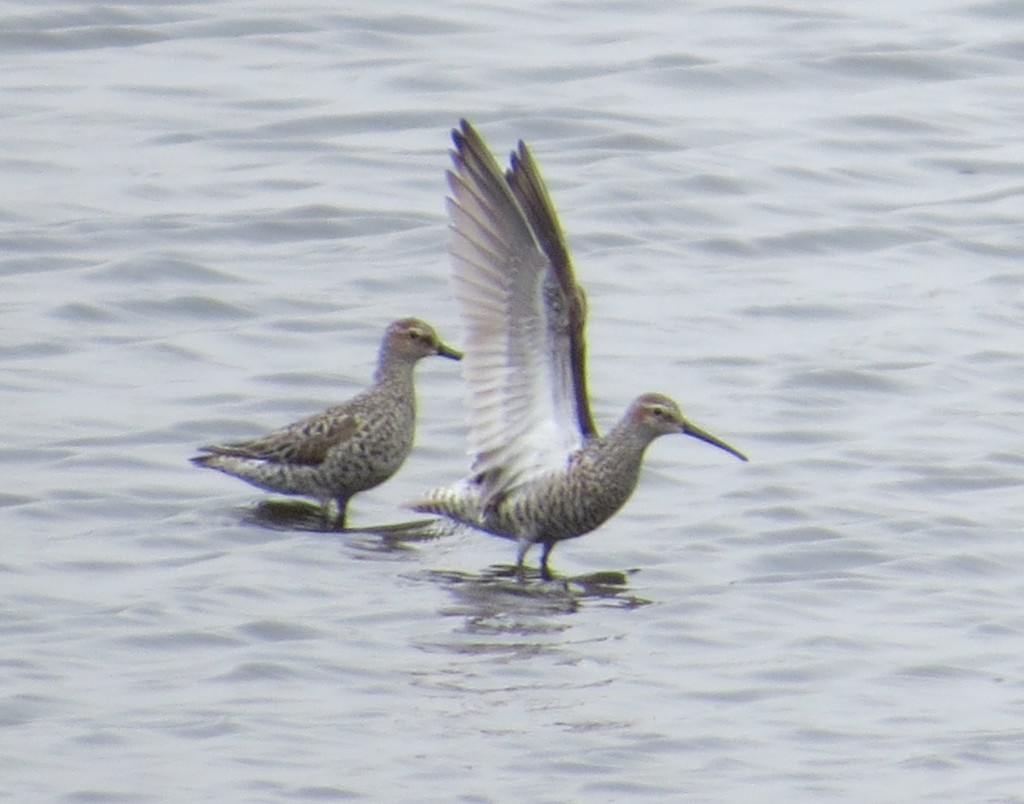 It turns out that there was one more little surprise for us mixed in with the chunkier shorebirds – a couple of Dunlin!  This was a life bird for both of us.  This is also my kind of shorebird as there is no doubt about the identification with the black bellies and chestnut-colored backs.  Awesome. 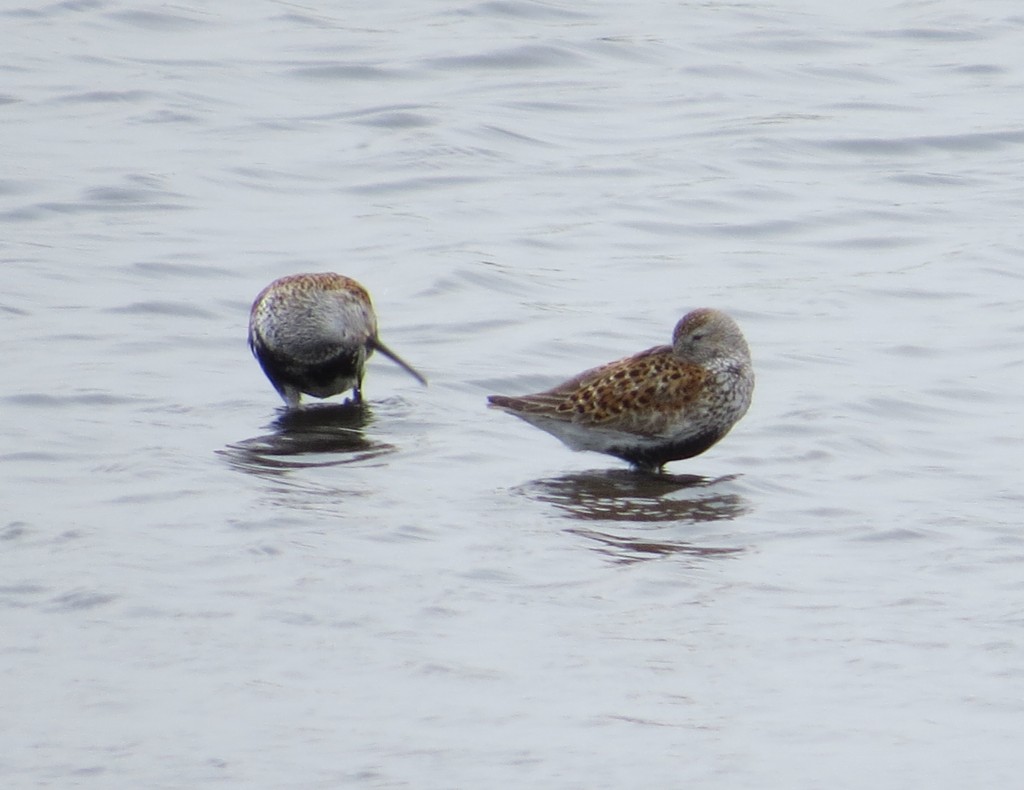 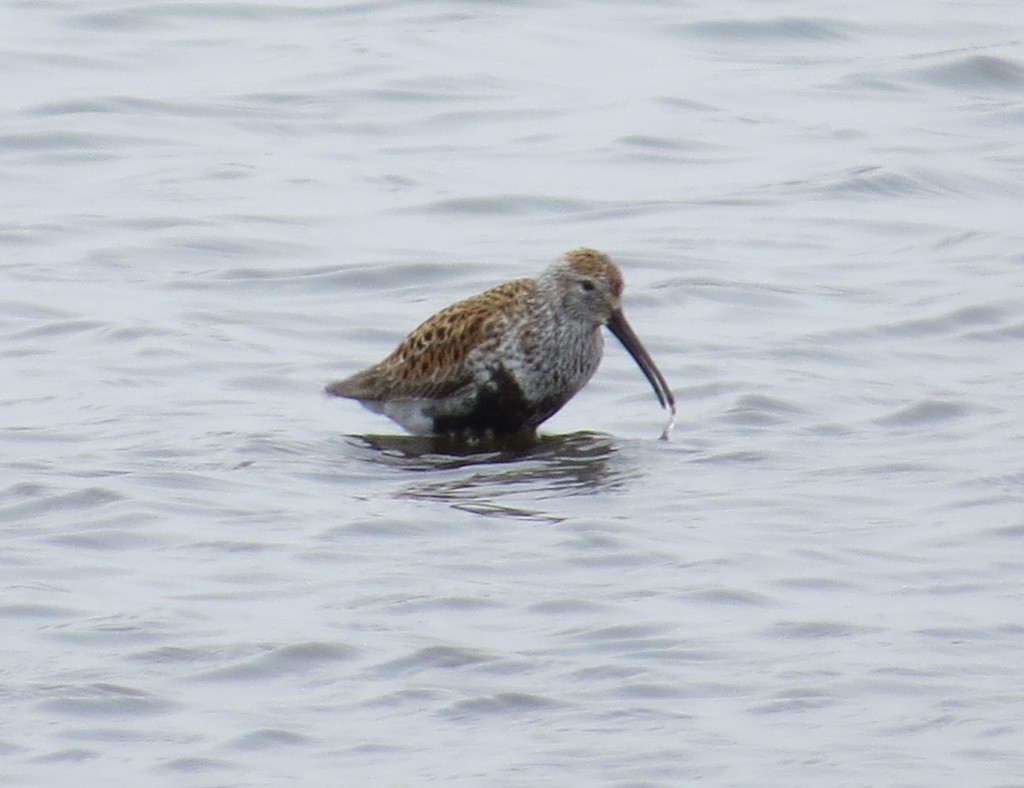 Three life birds for Evan, two for me, and a breeding plumage Red-necked Phalarope.  I guess we better stay alert for a few more late migrants.  As for the fishing report, Evan caught four Bluegill and quenched, albeit briefly, his thirst for fishing.

Later that evening we started working on our summer list of bird targets by going out with Randy.  We were after anything marshy – Least Bitterns, American Bitterns, Soras, and Virginia Rails.  We ended up hearing Soras and Virginia Rails which was pretty neat, but we did not see any.  As Randy said, they are the kind of birds that you just have to get lucky with and bump into someday in order to get a good look.  In the meantime we shall keep up the hunt for our targets and stay vigilant for any more late surprises.