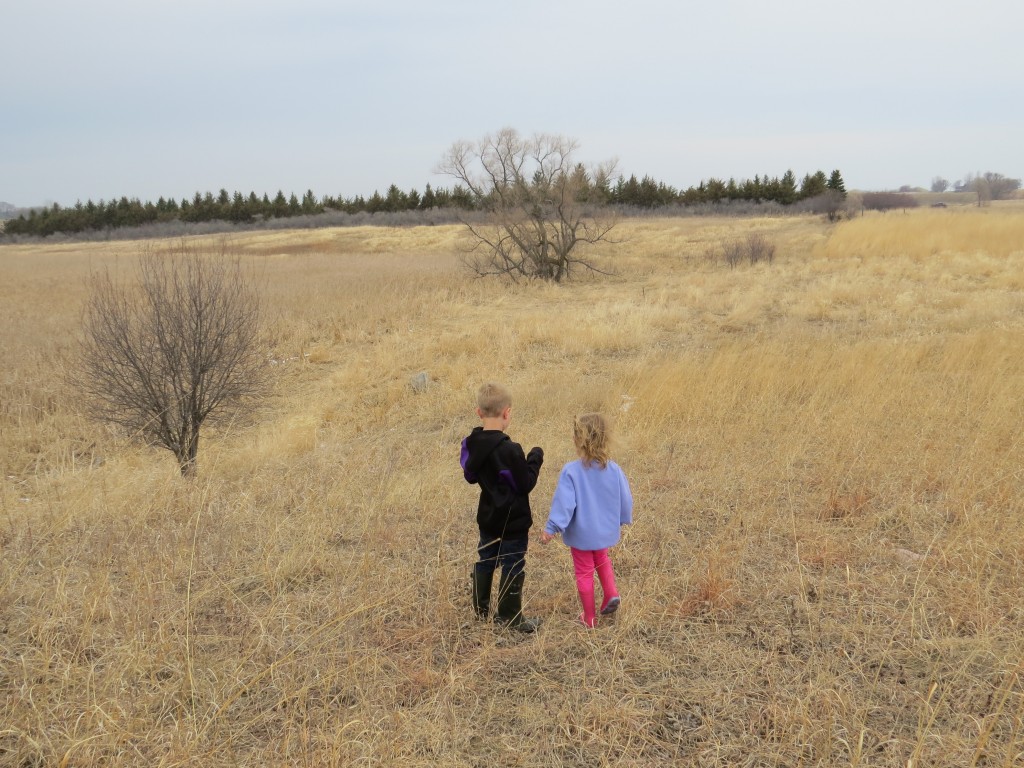 In an effort to keep my kids from turning into zombies as they watch and play their devices, I decided that we should get some fresh air while mom was at the grocery store.  So we went hiking for a little bit on a local Wildlife Management Area.  The kids enjoyed walking through puddles and little rivers everywhere; I enjoyed the Northern Harriers, Northern Flickers, and the sound of numerous Song Sparrows.  But the wind cut our enjoyment short, so we headed back to the vehicle to go home.

Just as we were within mere steps of the car, I got a text from Randy that a friend of his found some American Black Ducks today just a few miles to the north of us!  After consulting Google maps to know where to go, the kids and I were off.

We got to the area, but there must have been at least a dozen sloughs and ponds lining this one mile section of road.  And there were ducks everywhere – Mallards, American Wigeon, Blue-winged Teal, Northern Shovelers, Ruddy Ducks, Buffleheads, Redheads, Canvasbacks, Gadwalls, Wood Ducks, Hooded Mergansers, Common Goldeneye, Ring-necked Ducks, and Lesser Scaup.  We did our best to find the needle in the haystack, but we came up short.  Instead, I opted to take a picture of a few ducks I don’t normally get to photograph. 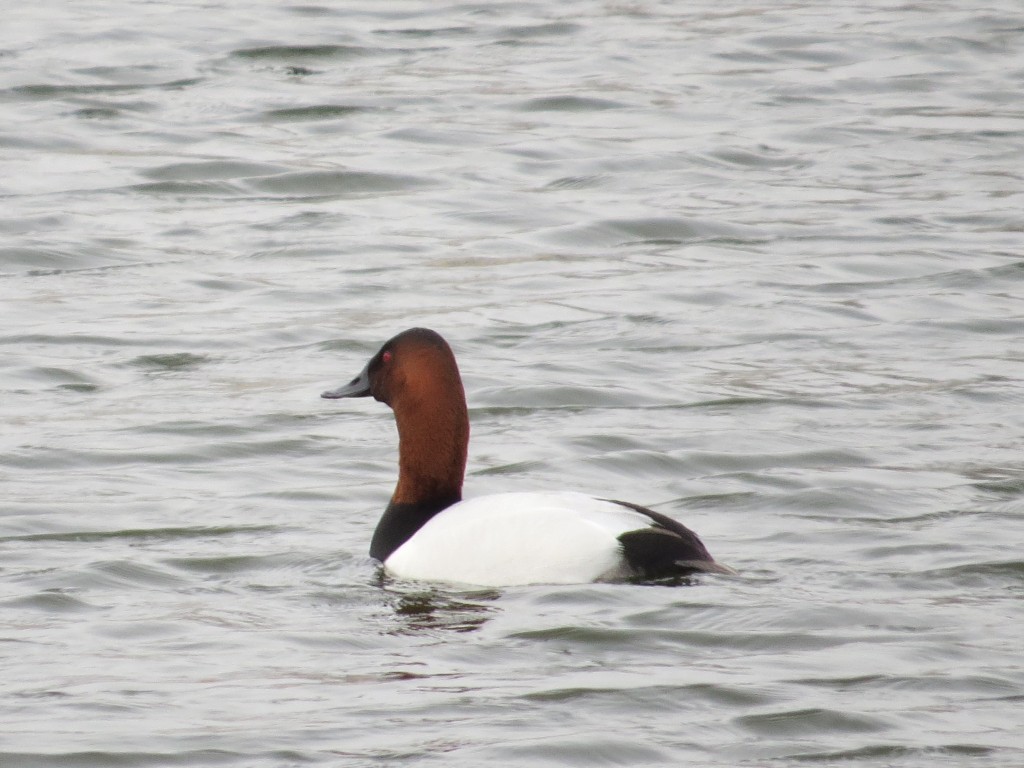 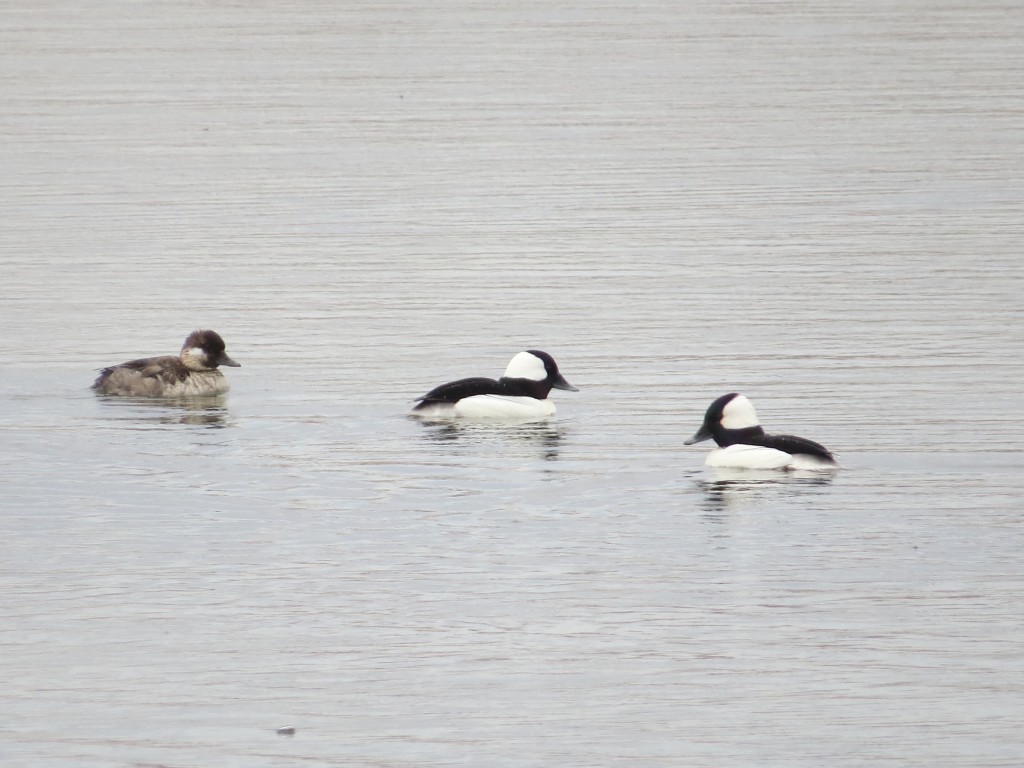 We gave up the search and headed toward home on some roads we’d never traveled.  That’s always highly recommended.  We encountered some more fun recent arrivals, like a Greater Yellowlegs, Great Egrets, Belted Kingfisher, and an Eastern Phoebe.  One of our staples was in a puddle just off the road and was quite photogenic today – the Wood Duck and his mate.  Wood Ducks have been my favorite duck since I was a kid and long before I was a birder.   They never fail to bring the wow factor. 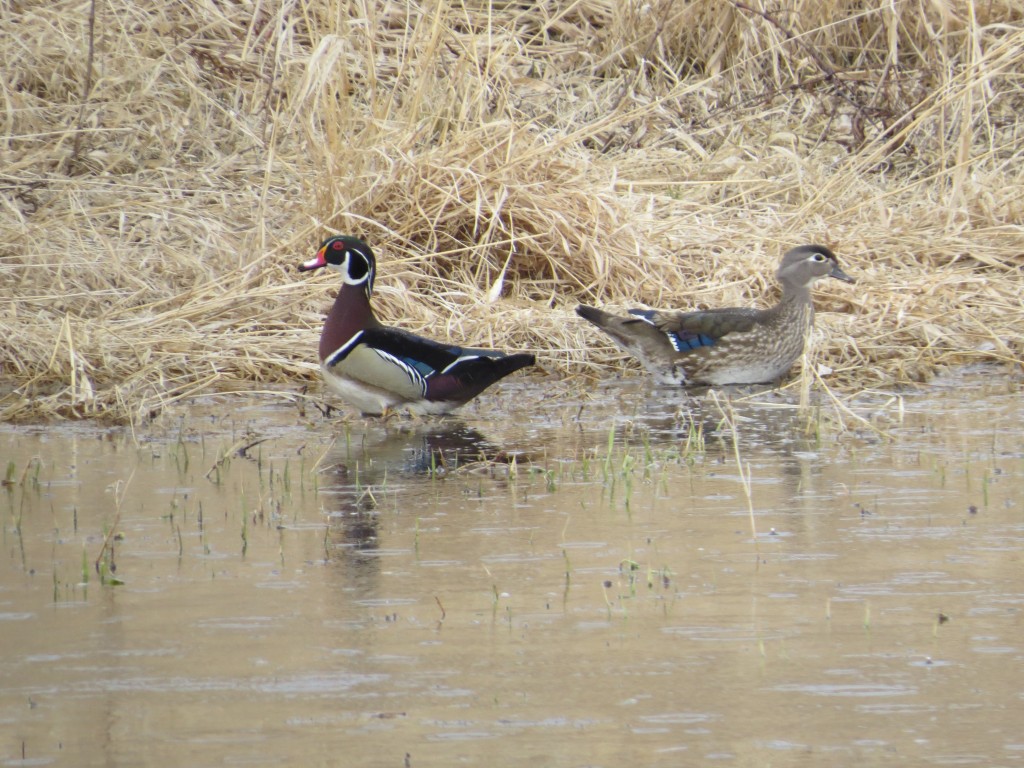 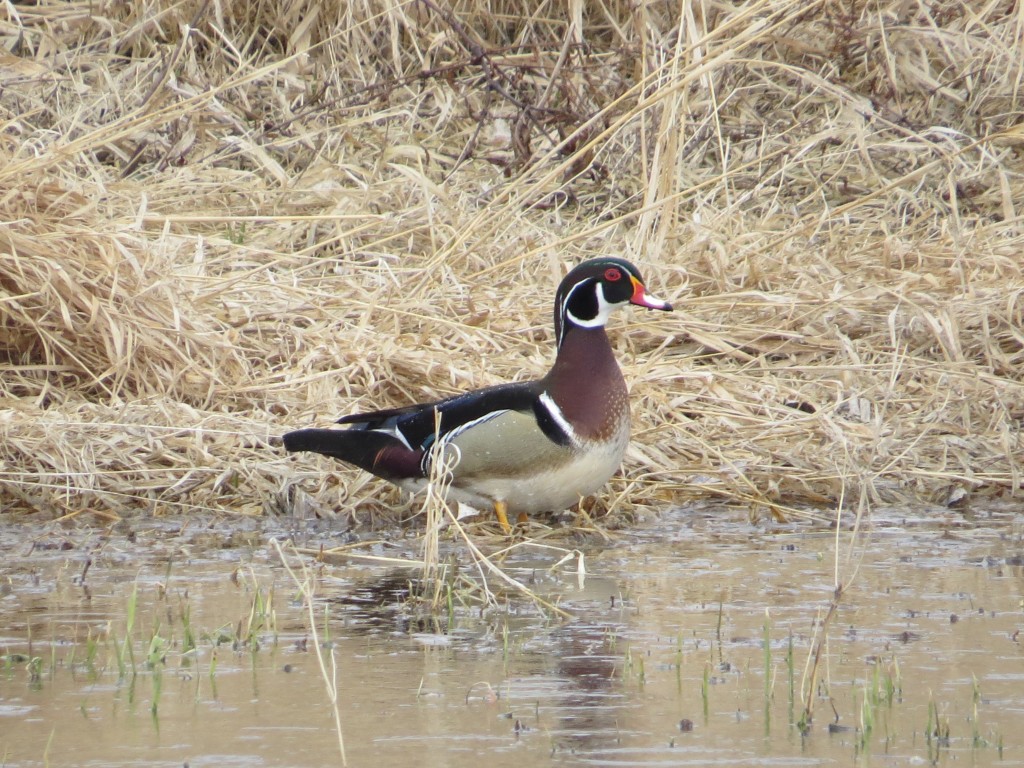 As we drove on, Evan spied his own pair of Wood Ducks in a marshy little puddle on his side of the road.  The kids and I watched them for quite a while as they tried to evade us in the thin cover.  These two were more in sync with each other than the previous pair as they were at least heading the same direction in life. 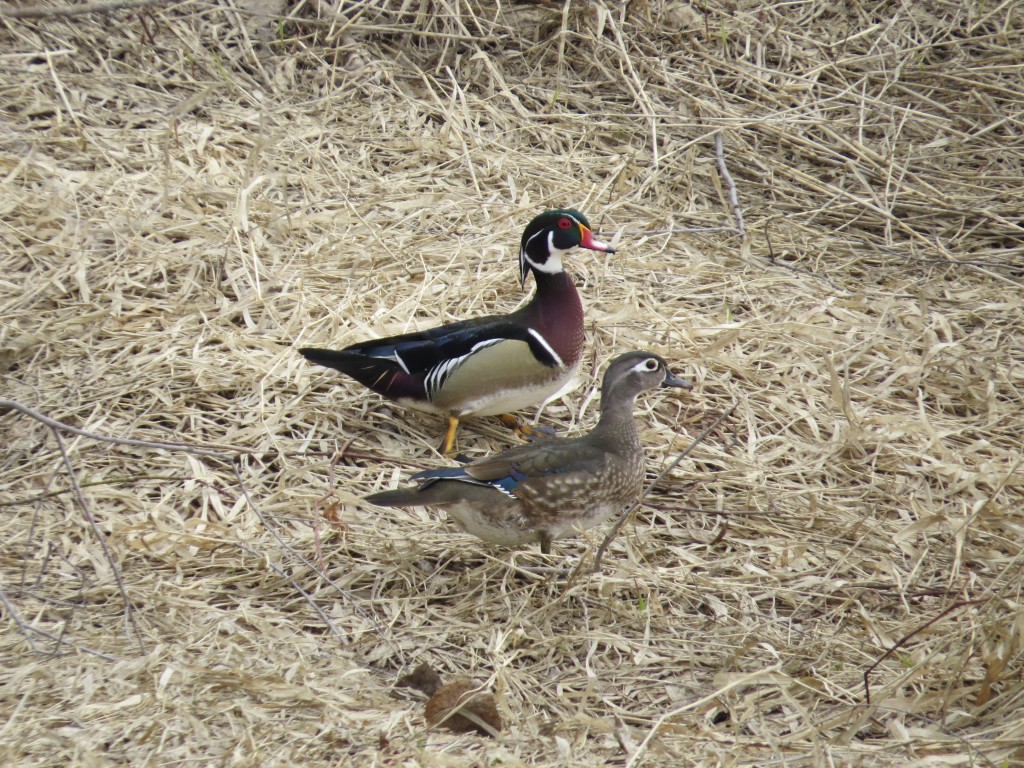 Once we got home, the kids hopped out of the car to go play with the neighbor girl.  As I was unloading my things I heard an awful noise, like a cat being murdered. It had been nearly a year, but I knew the sound and I can assure you that, indeed, a cat was not losing its life.  It was the disturbingly cool croaking sound of a Yellow-headed Blackbird! In the yard no less.  It didn’t take me long to locate it at the top of one of the trees.

I snapped a couple unremarkable photos and then went about my business. Later on as Melissa was looking out the kitchen window, she saw two Yellow-headed Blackbirds on the backyard feeder.  The bird is so well-named that she knew what it was without asking and was quite impressed with their beauty.  I went outside to try for some better photos and ended up catching a Yellow-headed Blackbird and one of our many Brown-headed Cowbirds sitting together on a branch.  The cowbird was slightly less photogenic. 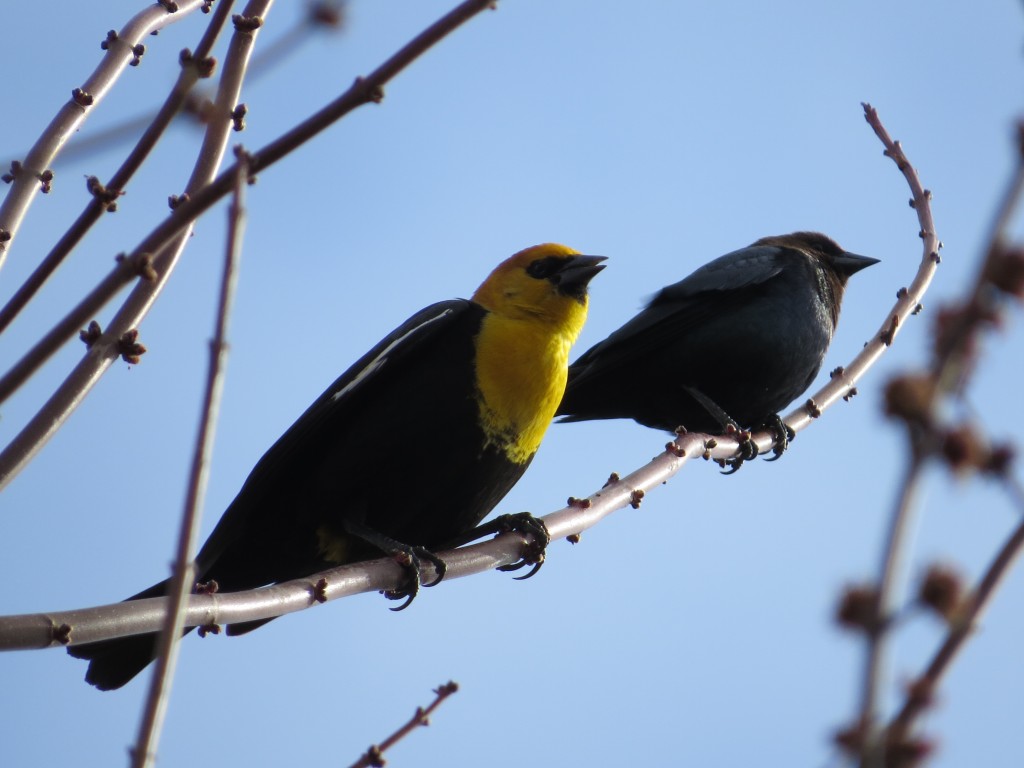 Our yard has the sounds of a marsh lately with all the Red-winged Blackbirds, Brown-headed Cowbirds, and now Yellow-headed Blackbirds all joining the chorus.  It was just a banner day for blackbirds in the yard.  We, of course, had our Common Grackles but also a European Starling and quite possibly a Rusty Blackbird.

As you can see in the photo above, the gloomy, overcast day started to brighten up.  I was walking through our house later on when the glorious late afternoon sunlight caught the breast of one of these Yellow-headed Blackbirds on our front feeder.  More than once I have been caught dead in my tracks by the likes of an Indigo Bunting, Baltimore Oriole, or Rose-breasted Grosbeak bathing in this perfect light.  Today it was the Yellow-head’s turn.  Our house makes for the perfect photography blind on such an occasion. 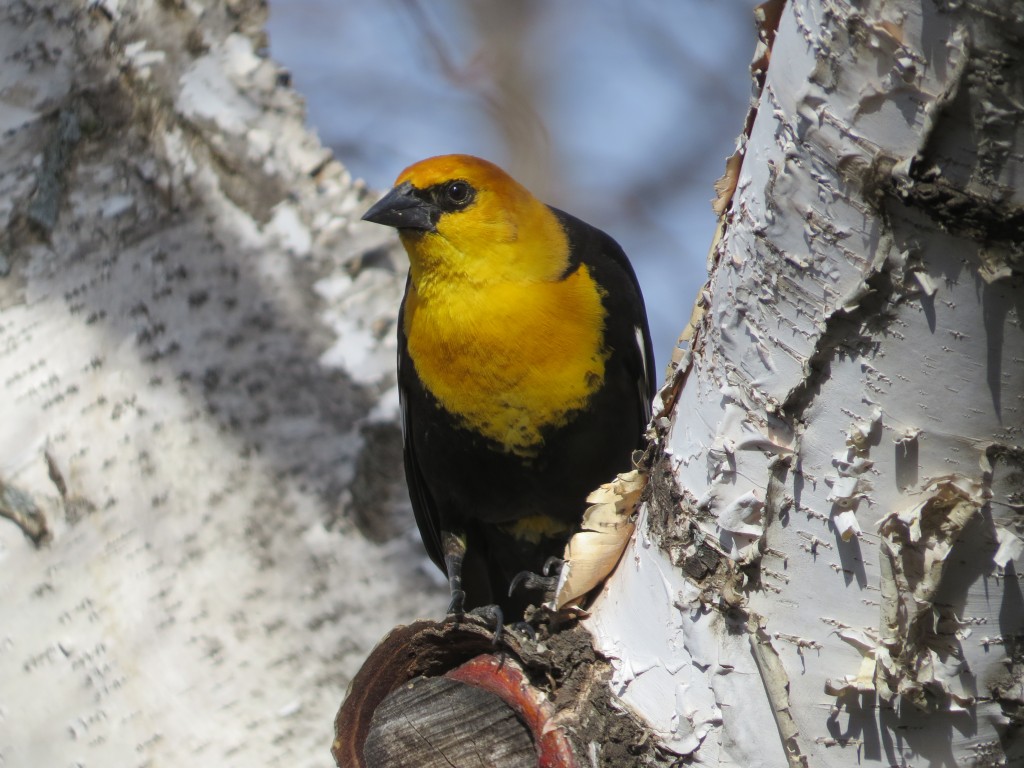 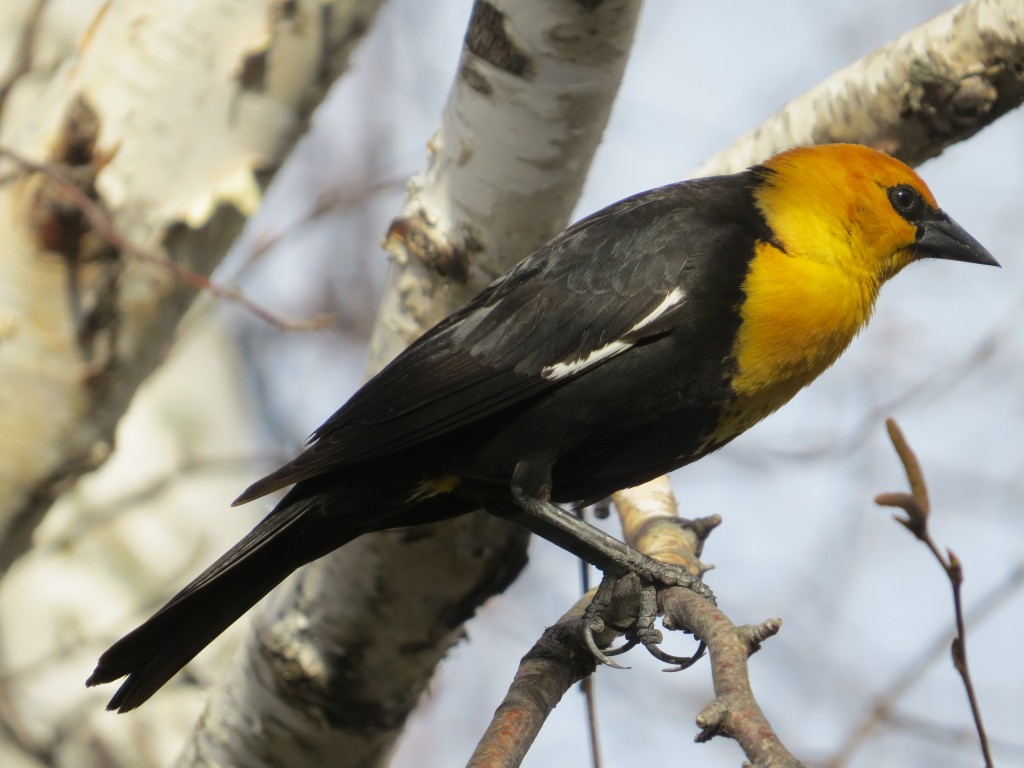 We ended up with four of these beauties in the yard tonight.  Migration is a fascinating thing.  Just a couple hours prior to this mini-invasion I had seen a report from about 60 miles south of us that huge flocks of these birds were coming through.  It was phenomenal that these birds just appear all the sudden and seemingly out of nowhere.

The arrival of this special yard bird caused Evan to reminisce/gloat about how he got his Yellow-headed lifer before me last year when five of these guys invaded the yard while Melissa and I were away for the weekend and Grandma and Grandpa were holding down the fort.  It took me a good couple weeks before I eventually found my own. 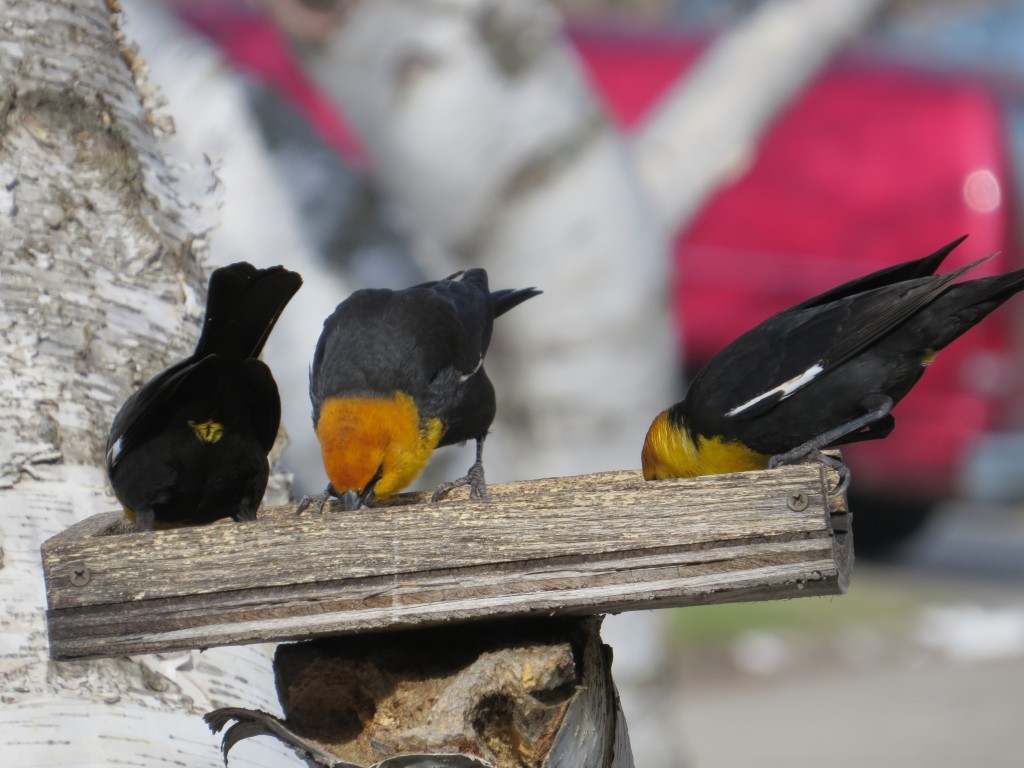 The celebration of blackbirds continued as the different species found their way into the spotlight, or sunlight rather. 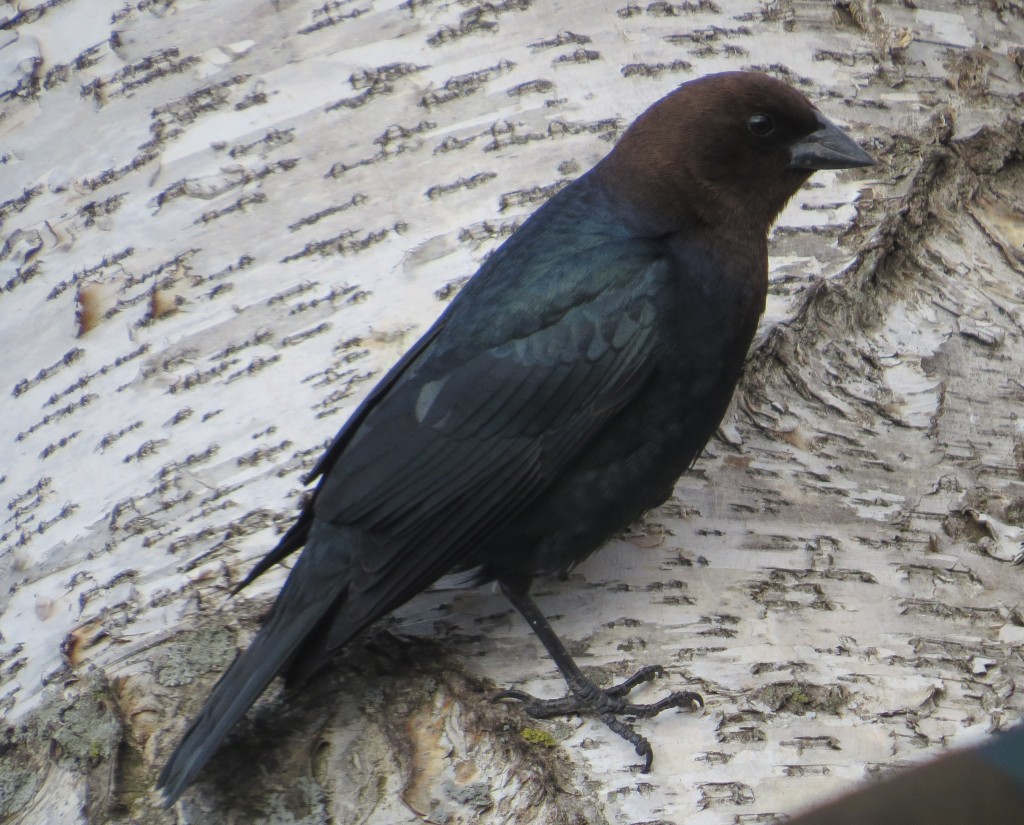 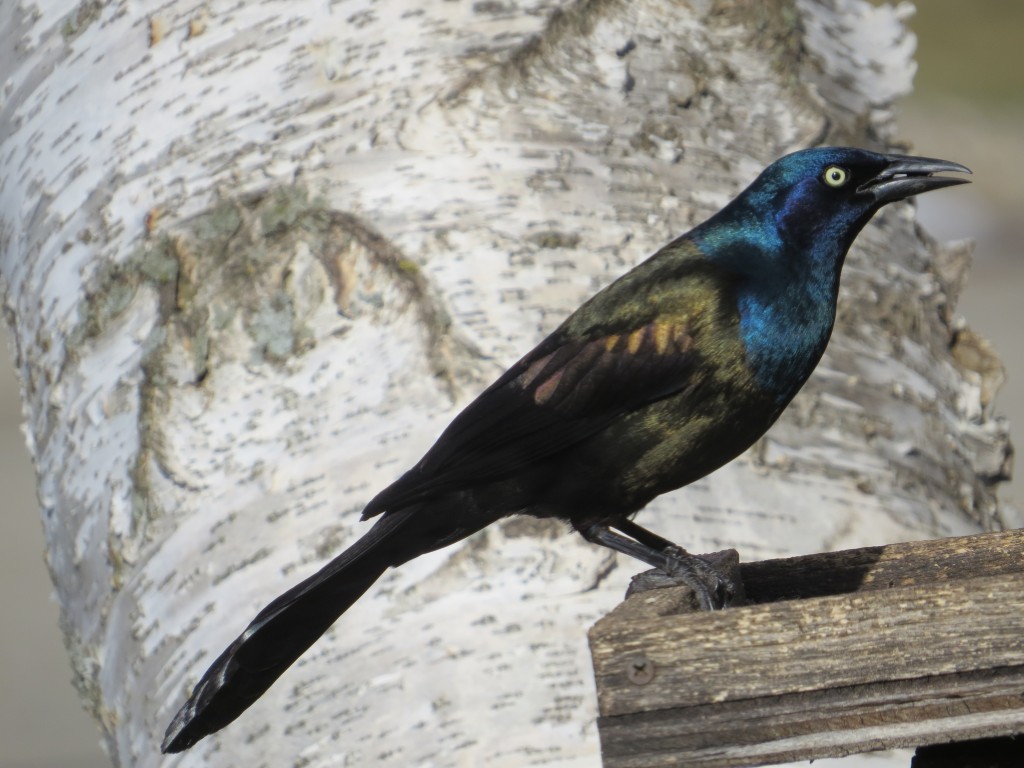 Migration certainly is an exciting time.  With the uptick in yard activity, this grackle nearly exploded because he couldn’t contain his excitement. 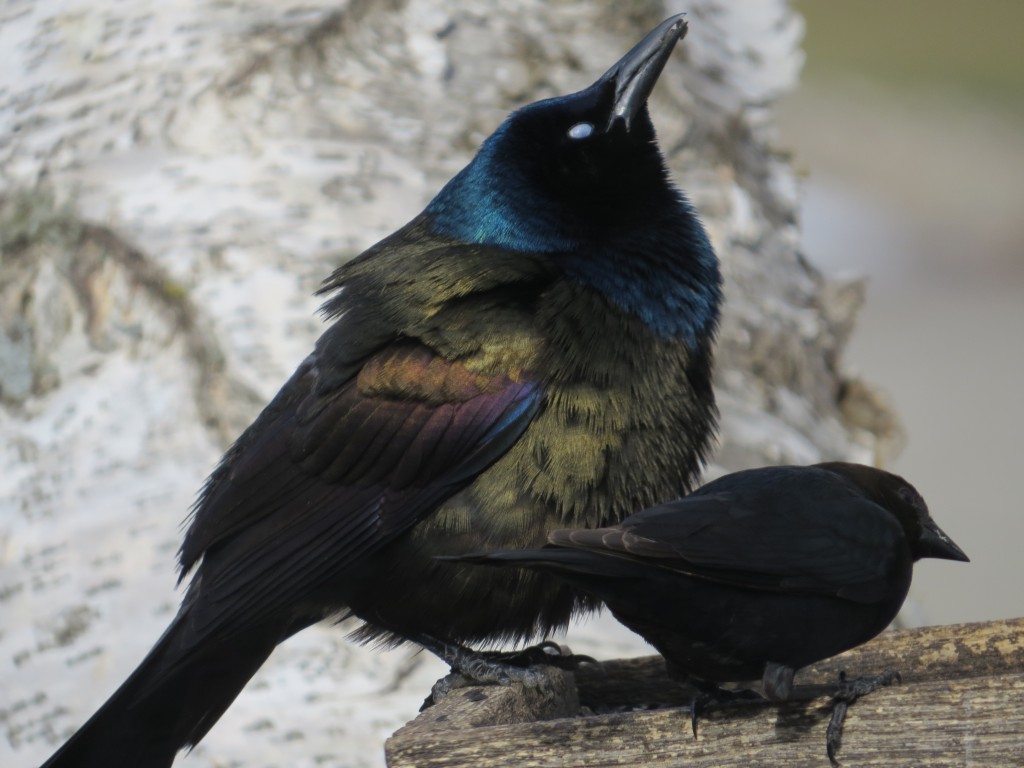 But migration is also a time of good-byes.  We seem to be having the classic long Minnesota good-bye with our American Tree Sparrows and Dark-eyed Juncos. 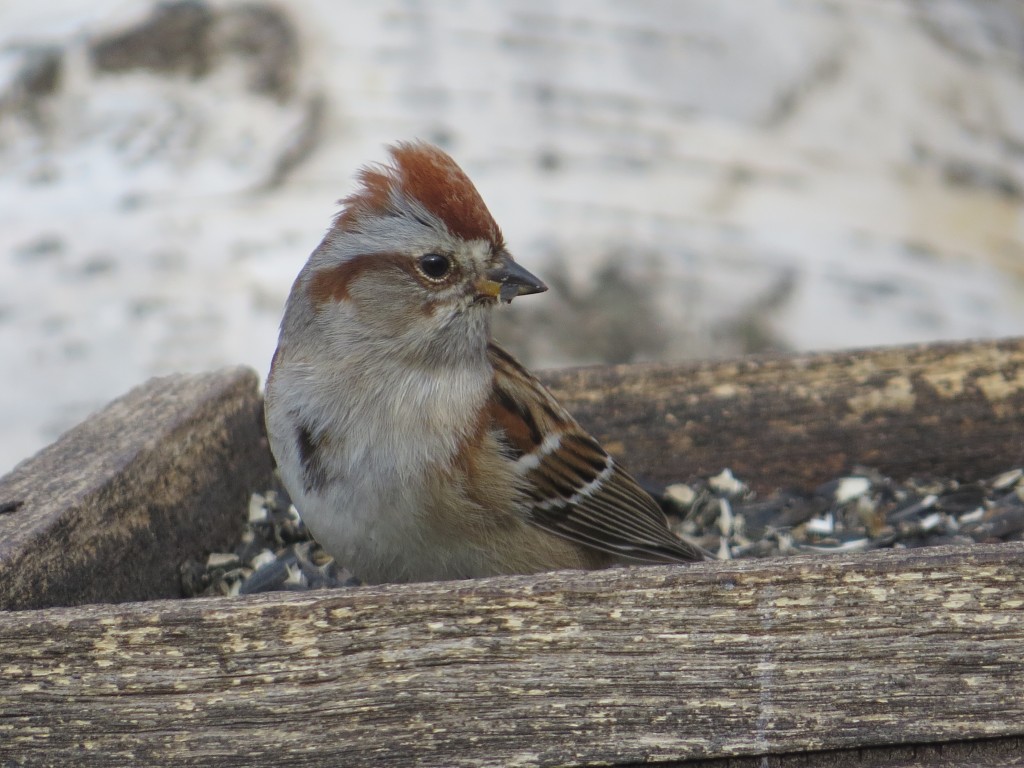 Today our yard had the sound and feel of a prairie marsh.  Pretty soon there will be warblers spazzing in the treetops and tough sparrows lurking under the shrubs.  One birder I follow once equated birding to one big Easter egg hunt.  And I can’t wait to see what the Easter Bunny brings tomorrow.