Sometimes a perfect storm comes along that produces some great birding.  No, I’m not talking about Wednesday’s blizzard whose 11 inches of snow and limited visibility thrust us back into the heart of winter.  Instead, I’m referring to Melissa having a planned crafting night with some girlfriends and me wanting to go see an easy-pickings Eastern Screech Owl in Hutchinson.  The problem with this owl is that it is nesting in a Wood Duck nesting box and only pokes its head out close to dark. Normally that’s not a problem, but when it’s nearly an hour’s drive and the sun sets around 8:00, it gets too late to bring Evan along, especially on a school night.  But this was no school night and I was fed up with being housebound by the snow when I should be out doing anything, really.

So I got the van set up with the DVD player, rented Cloudy with a Chance of Meatballs 2, and the kids and I set sail for Hutch.  They were excited to be in their pajamas watching a movie in the car and going on another one of dad’s owl quests. As we drove I did my best to tally species and count birds for an eBird checklist.  Ordinarily that’s easy to do in the winter when we hardly have anything with feathers to look at.  Now, though, there are birds everywhere.  I quickly gave up counting and only made note of the notable ones – go figure. Mostly the birds were migrating waterfowl.  Since we’ve nearly seen all we can see in that department, I did not slow down for the birds.  I had to keep focused on the mission of getting to Hutch.  I did keep one eye open for American Black Ducks – an uncommon bird here, getting even harder to find with each day of migration that passes by.  I imagine that to see them, though, I’ll have to man up and stand in the freezing cold to sort through hundreds of Mallards and thousands of Canada Geese when the only thing creating open water is the incessant paddling of the ducks and geese.

Anyhow, as we cruised through Cosmos and were traveling by a good-sized slough, I saw a small, white water-bird of some sort constantly flying over the water and touching down every now and then. It was quite small with a black head.   What the? Was it a tern of some sort back already? In any case, I had to pull over and see what this was. I knew already that it had a black head and was a white bird, but the binoculars revealed a most impressive clue as to what it was.  That clue, or clues rather, where the white triangles on the outer parts of the wings – a field mark that clinched this as our lifer Bonaparte’s Gull! 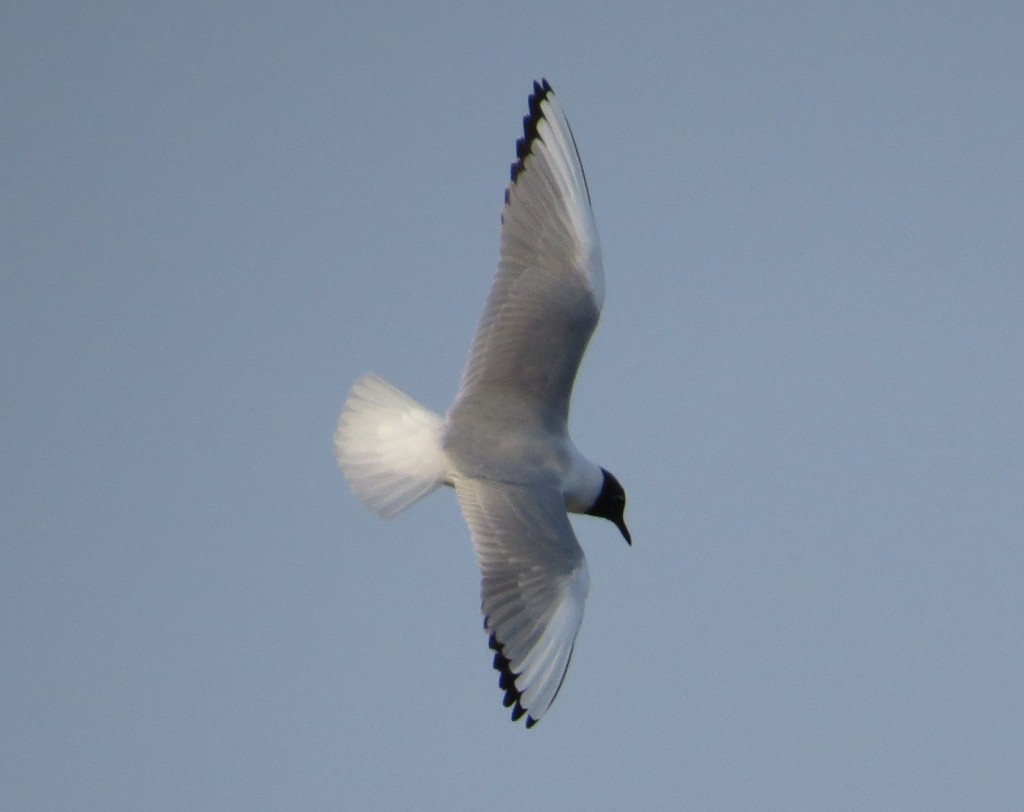 I’ve never gotten into gulls, but this might very well be the turning point.  When I first got into birding I wrote off sparrows and gulls as drab, boring birds that all looked alike.  Well, I’ve come to really enjoy the sparrows the more I’ve seen, so now maybe gulls will follow suit.  This was a crisp-looking gull whose petite size and rapid flight made it fascinating to watch. 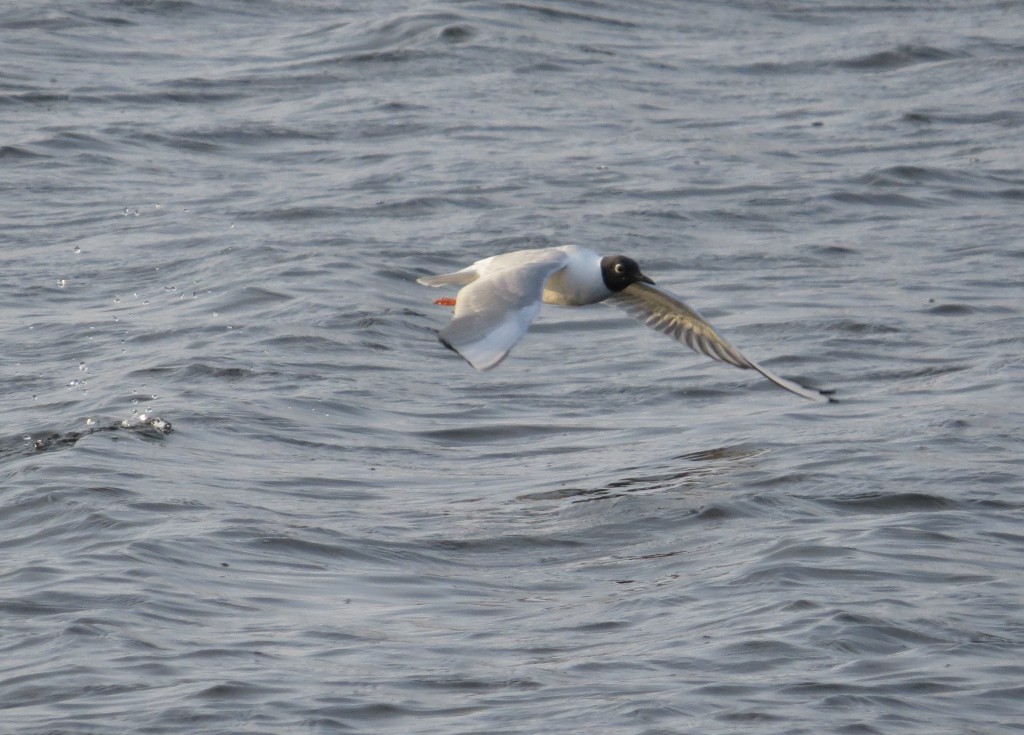 The rapid flight also made it a bugger to photograph. The bird was often flying far away but when it was close, it was zipping by too fast.  It gave me a great example for the next time I teach related rates in calculus – as the bird’s distance to me decreased, the speed at which the angle from me to the bird increased, reaching its fastest point when it was directly in front of me and slowing down again the further away the bird flew.  The translation here is that I basically got lots and lots of blurry shots for the split second it was right by me or lots and lots of clear shots when it was far away.  Finally, though, I was able to put calculus (and the bird) on my side to get some photos I could live with.  Adding to the difficulty of photographing this bird was that I was standing along the very busy Hwy. 7 – I am sure that I will be asked a hundred times next week in school about what I was doing. 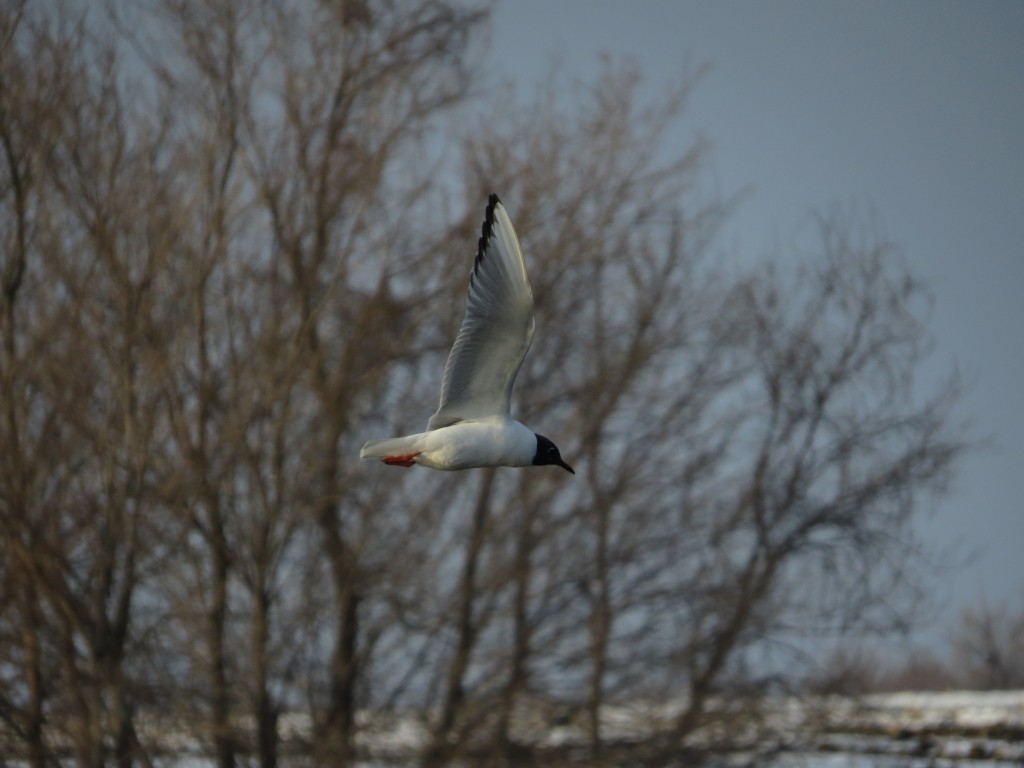 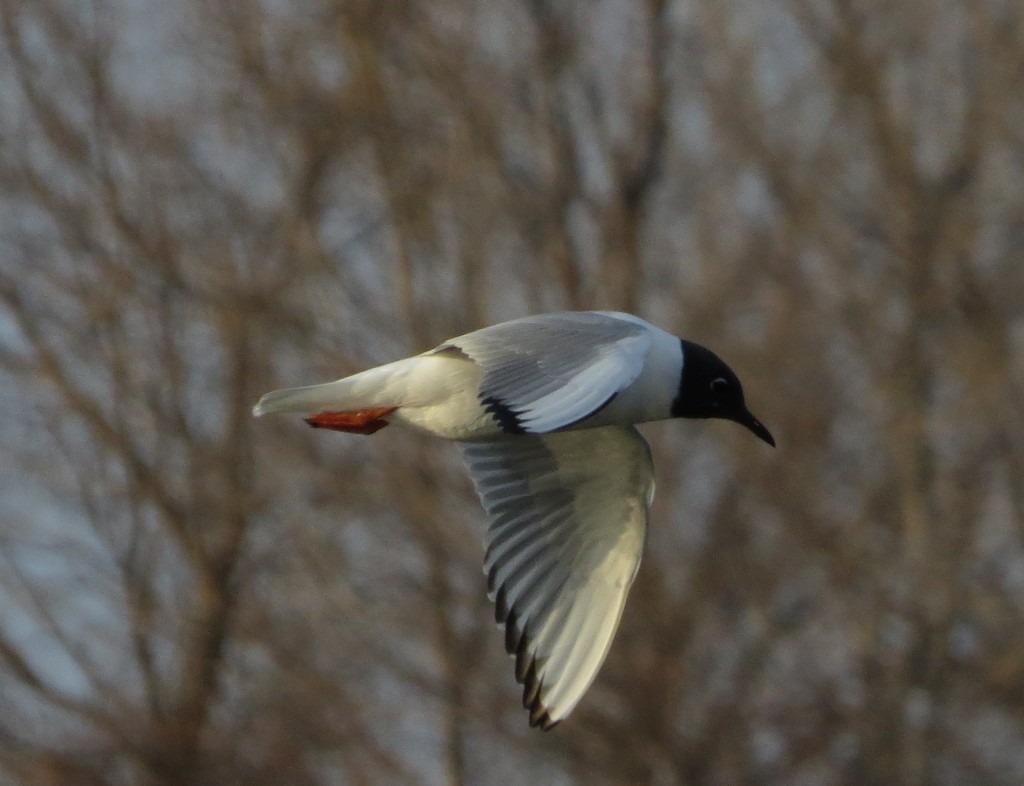 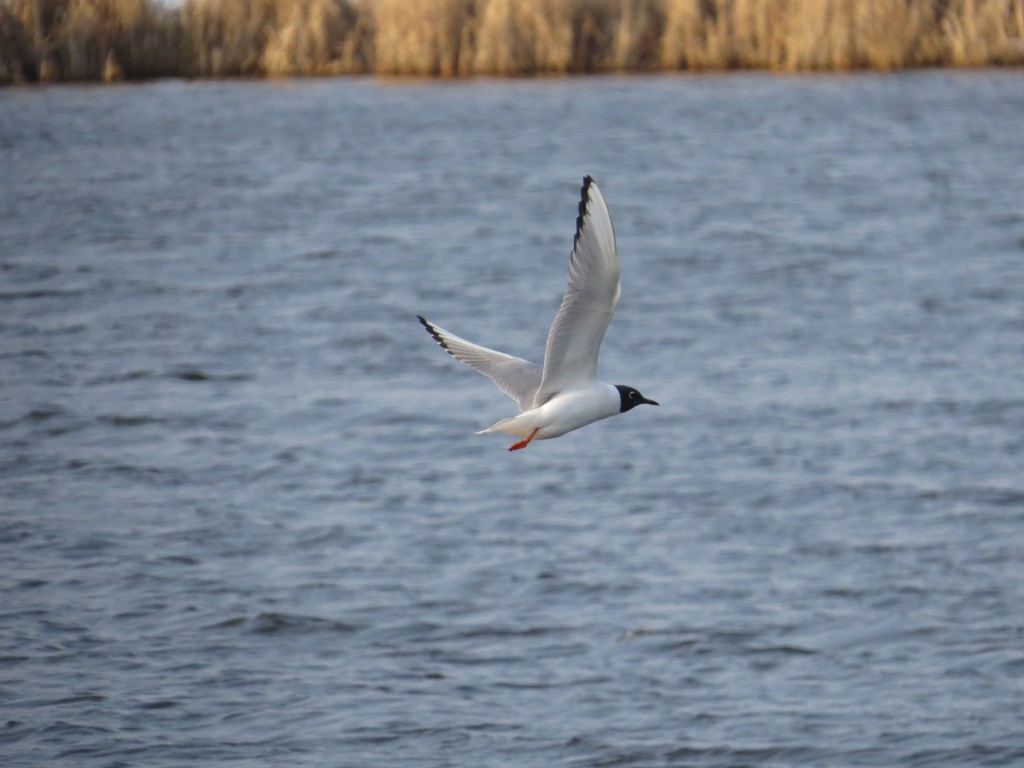 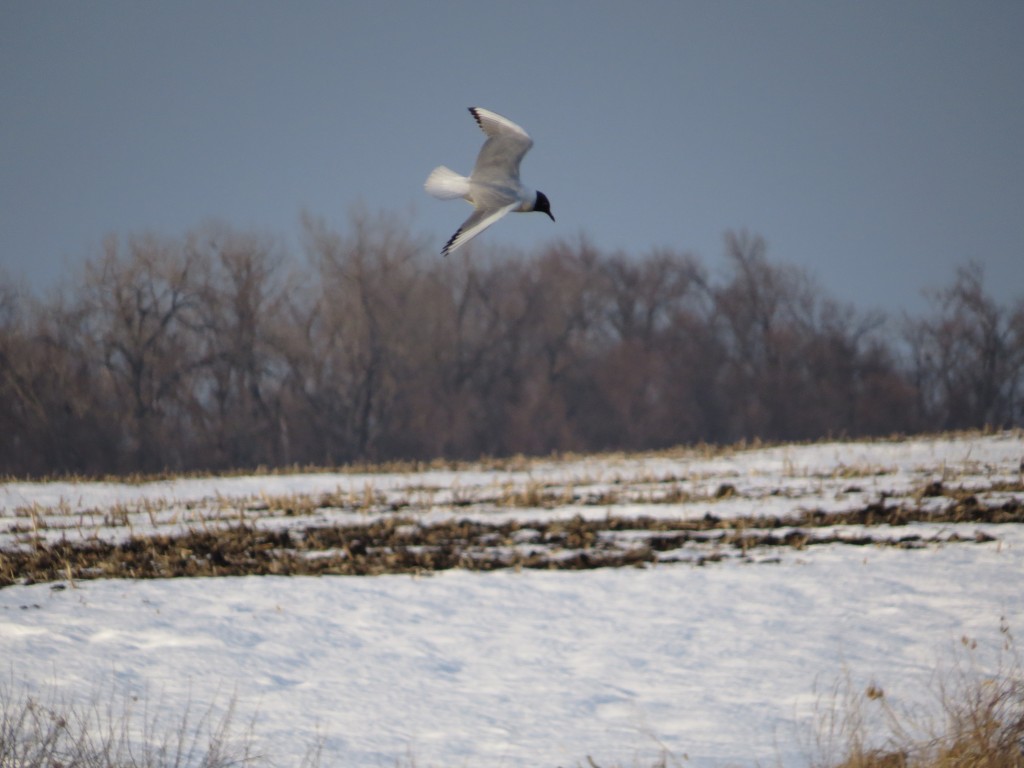 I only saw this gull land twice.  I couldn’t get over how small it was.  Here it dabbled with some dabblers, the Blue-winged Teal. 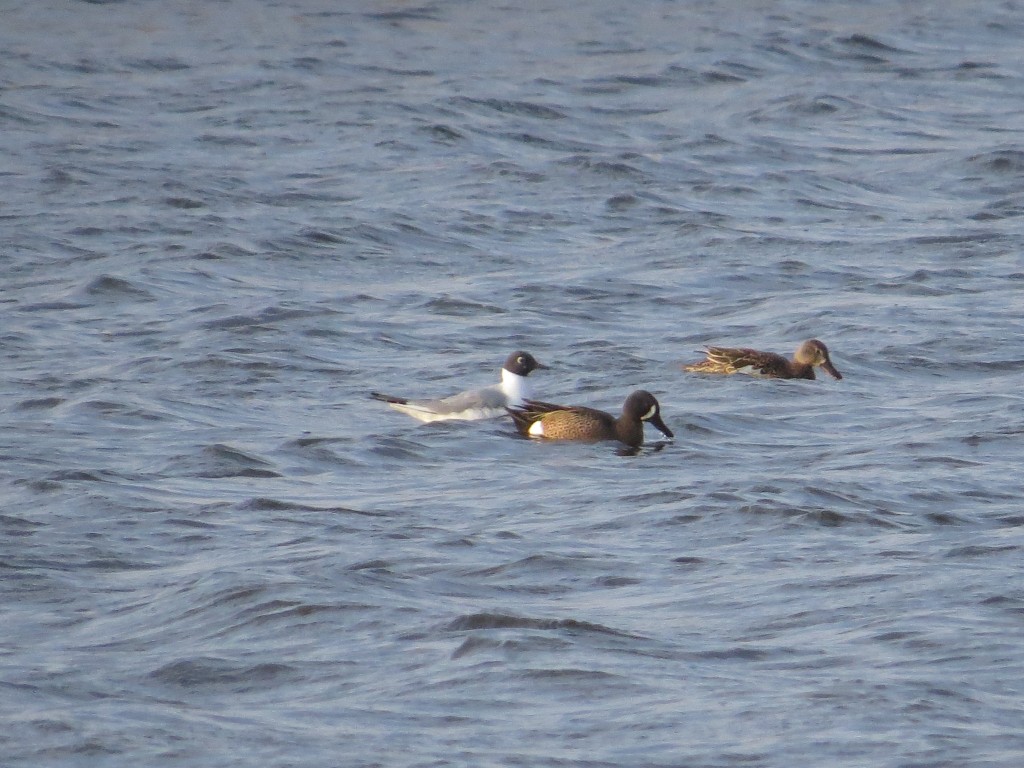 Bonaparte’s Gull with a pair of Blue-winged Teal

My meatballs endured this lengthy photo shoot since they were engrossed in their movie.  Evan did pause long enough look at his new life bird.  He’s all about the ticks – his interest in birding spikes, albeit briefly, when there’s a new bird on the line.

We continued on to Hutchinson and drove around for a bit before staking out the yard with the Eastern Screech Owl.  I was hoping to find our beloved state bird, the Common Loon, simply known as the “loon.”  I heard several of them have been back already. We didn’t have any luck on the loon but did find an environmental learning center where corn had been set out for ducks and geese.  It was pretty neat to see wild Snow Geese up close, but the chain-link fence made for difficult photography. 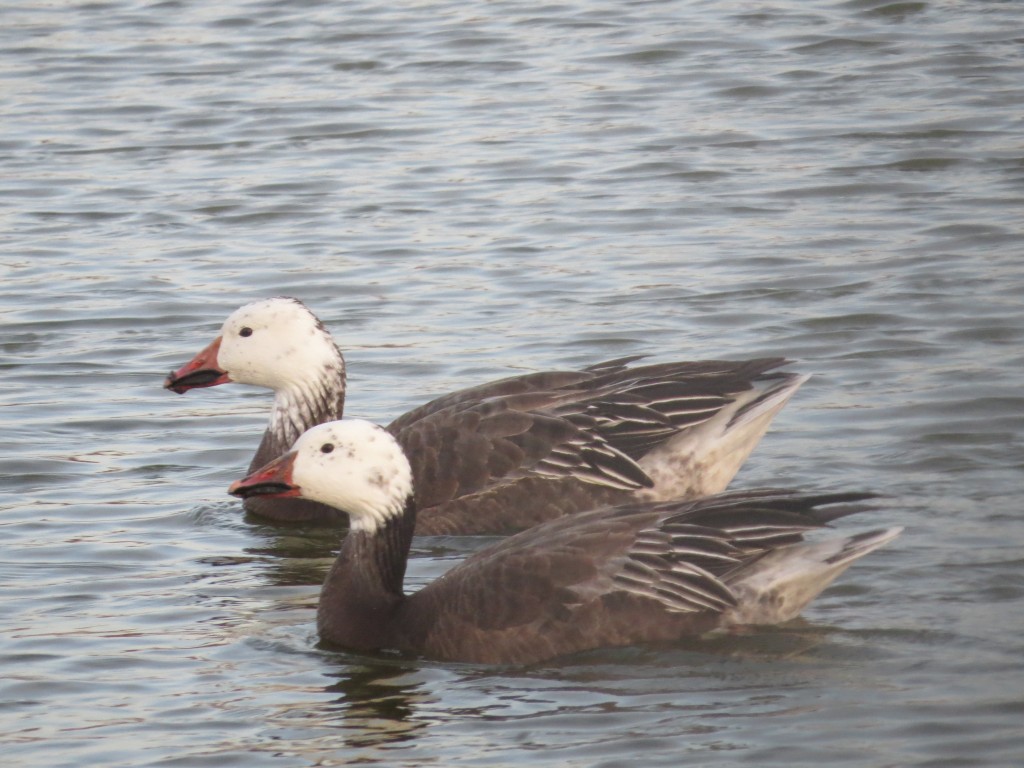 We finally got to our stake-out.  The truth is that I didn’t want to stay long as I was a bit uncomfortable parking in front of someone’s house and watching their front yard.  More than once I have felt like a creep in the name of birding.  Anyway, we watched for the owl, or I watched anyway, while the kids started their second movie.

Alas, there was no owl.  A new and local birder, Kristine, who had put me onto this owl and who discovered the incredible McLeod County record Northern Hawk Owl told me that the owners of the Wood Duck box have a video camera inside the box.  The Screech now had 5 eggs and wasn’t as regular in her game of peek-a-boo anymore.

Finally darkness arrived, and it was time to head home. But, as is protocol on our bigger birding trips, we stopped off for a fast-food snack before hitting the road.  And now my birding eyes switched to deer mode while I drove home in the darkness listening to two kids laughing simultaneously at the antics of Tom and Jerry.  We didn’t see what we came to see, but that’s okay.  It was a fun outing with an unexpected life bird.  Seeing the Screech would have just been the icing on the cake.

2 thoughts on “A Consolation Prize that Trumped the Target”