It just seems that the good birding won’t stop.  While the Arizona birding was a grand adventure and the Spotted Towhee was a mountain-top experience (far from literally, of course), I have continued to experience some great moments in birding.  Sticking to the integrity of this blog that documents shared family experiences, I often do not write about those times.  Today, however, the family was along and got to experience some unplanned, unforgettable birding.

This afternoon we went down to Stewart to visit my Aunt and Uncle.  My Uncle Larry is our CPA and had just finished our tax returns, so we were going to head down that way to visit for a bit, go through the returns, and find out the good or bad news.  Not only was it fun to visit with Larry and Les as always, but we got to check out the resident and migrating birds that were actively moving around on their acreage.  At one point several of us were watching a group of 8 Northern Flickers (I’ve been seeing them in large groups lately).  Then Larry asked what kind of larger bird was sitting in the middle of the yard.  Wait, what? I had seen what he was looking at earlier but dismissed it as a fallen branch.  Here it was a motionless Cooper’s Hawk that had a Northern Flicker pinned to the ground the whole time we were watching the Northern Flickers bopping all over the yard! 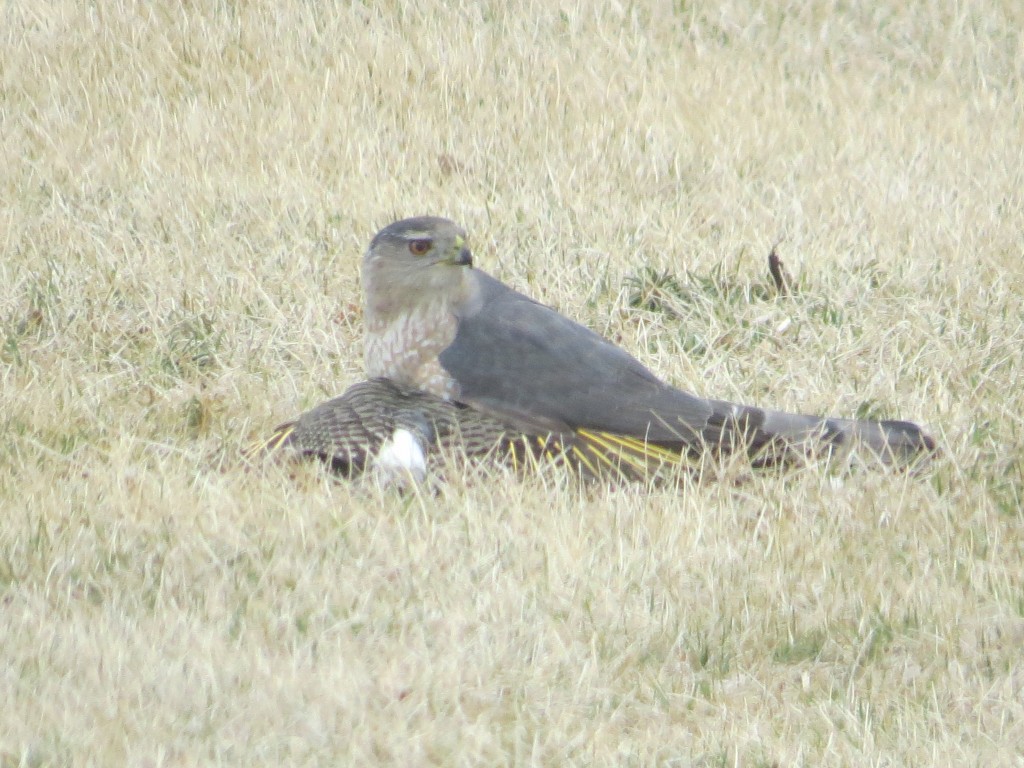 Cooper’s Hawk on top of a Northern Flicker 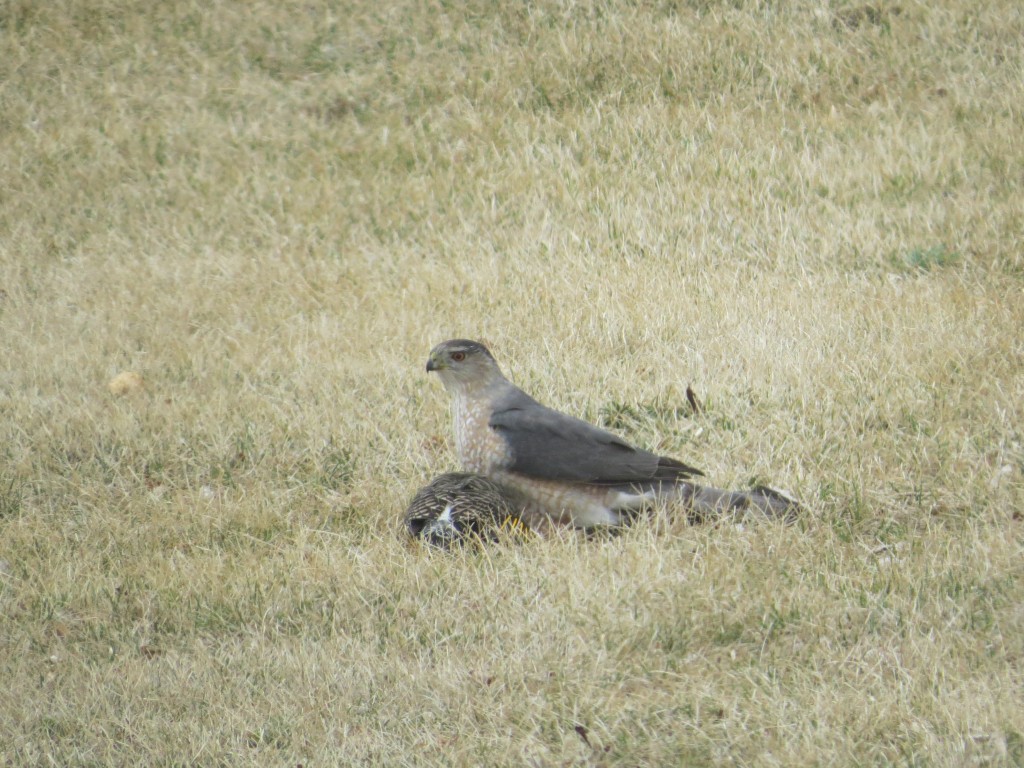 We all watched in awe (or horror depending on the person) as this flicker fought for his life and flapped like crazy.  The whole time the hawk just stayed on its head/neck.  Eventually, after several minutes, the flicker gave up the ghost and the hawk proceeded to rip him to shreds.  Evan was beyond excited and wanted to go flush the hawk so he could see the dead bird.  We told him he couldn’t disturb the hawk’s dinner.  But when we left a short time later, he ran over to that spot anyway.  The hawk and the flicker were both gone.  It was a cool display of nature.

Speaking of cool raptors killing and eating stuff, here is a shot from the previous night when I went out with Steve for some serious birding around Kandiyohi County.  We had many highlights, but this one took the cake – a Merlin eating a Dark-eyed Junco.  The junco was enough of a distraction to the Merlin that I was able to get close (and use Steve’s sunroof on his new car) to get some good photos of this uncommon bird. 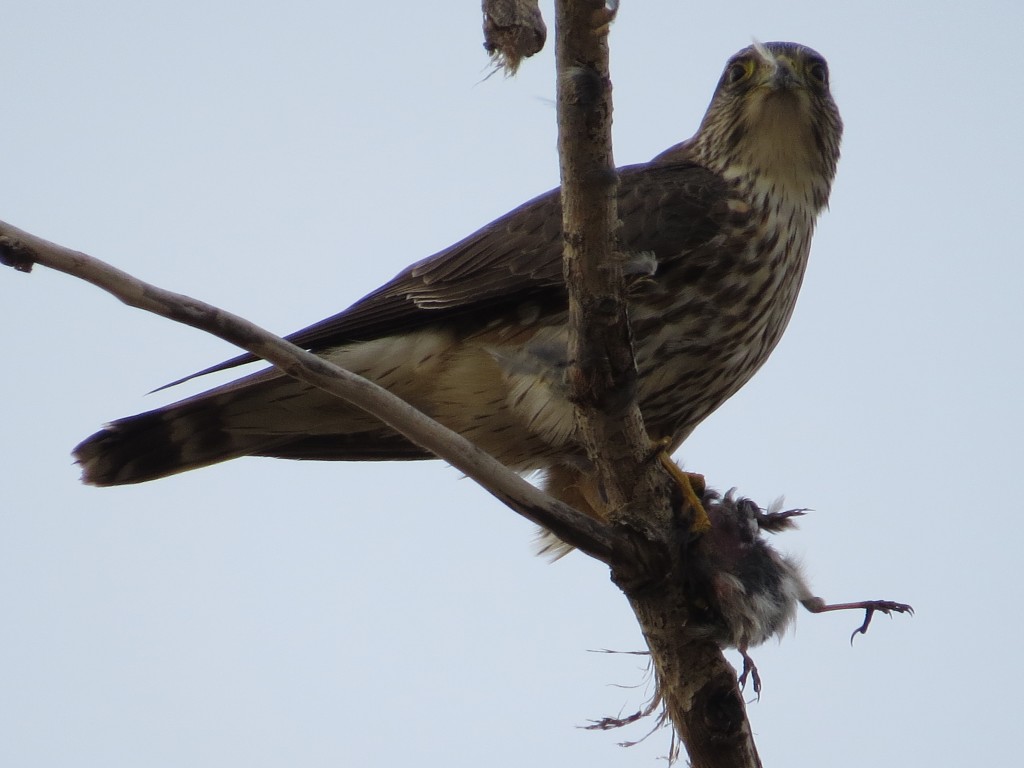 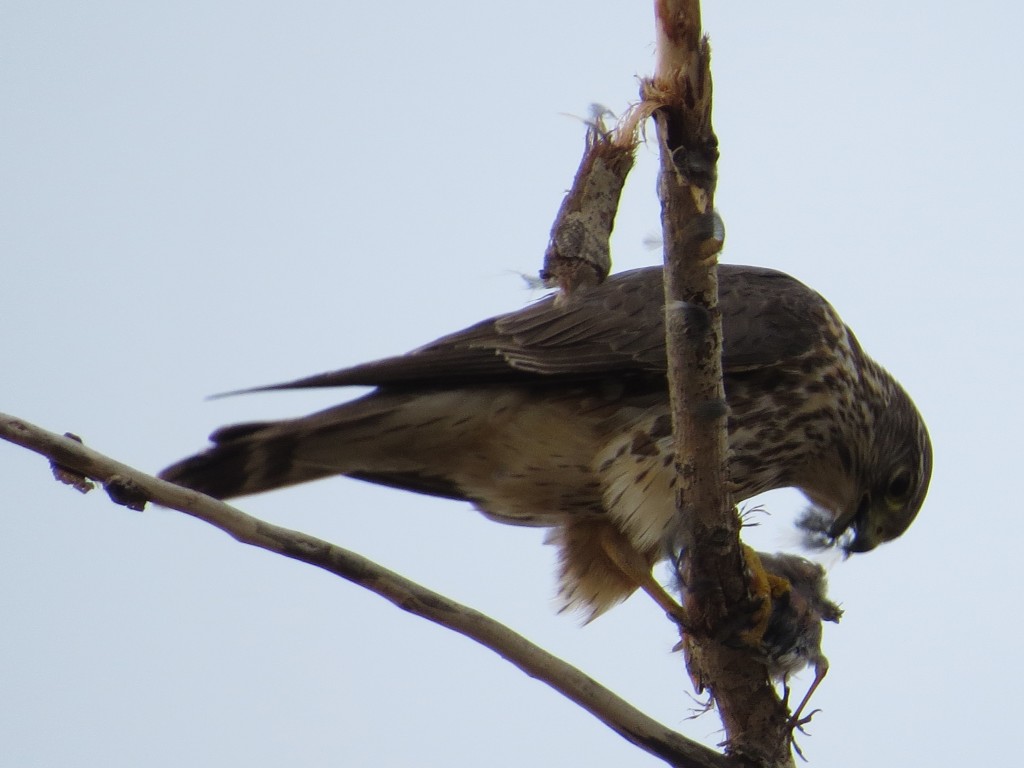 On the way home from Uncle Larry’s we were driving along when I spotted a suspicious-looking white egret all hunched up in our 35-degree weather.  I had to turn around to see if it was a Snowy Egret or a Cattle Egret, both of which are rare but regular birds to our area.  Nope, it was just the common Great Egret. 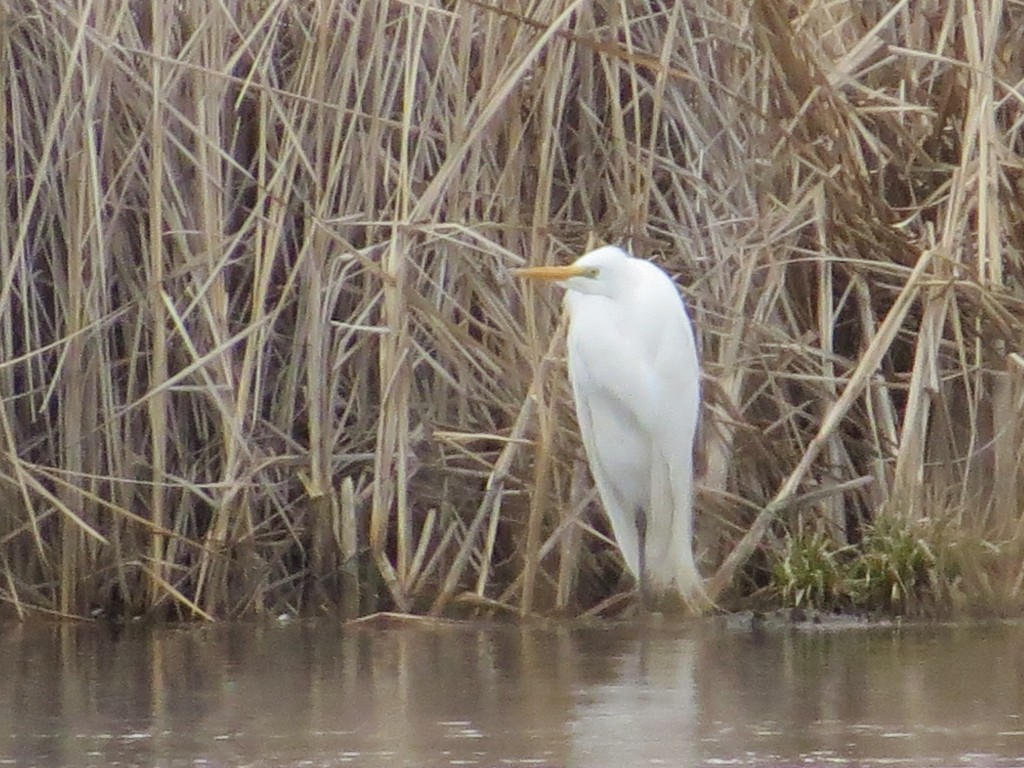 I had seen a large, white bird on the same pond while driving by at 60 MPH but just dismissed it as an American White Pelican, Trumpeter Swan, or Tundra Swan.  In any case, it would have been boring and not worth a second glance.  However, after we stopped and looked at the egret, Melissa asked me what the big, white bird was.  So I put up my binoculars and couldn’t believe my eyes! It was a lifer AND a rare bird – the Mute Swan!  I really need to bring Melissa with me more often.  She finds all the good stuff! 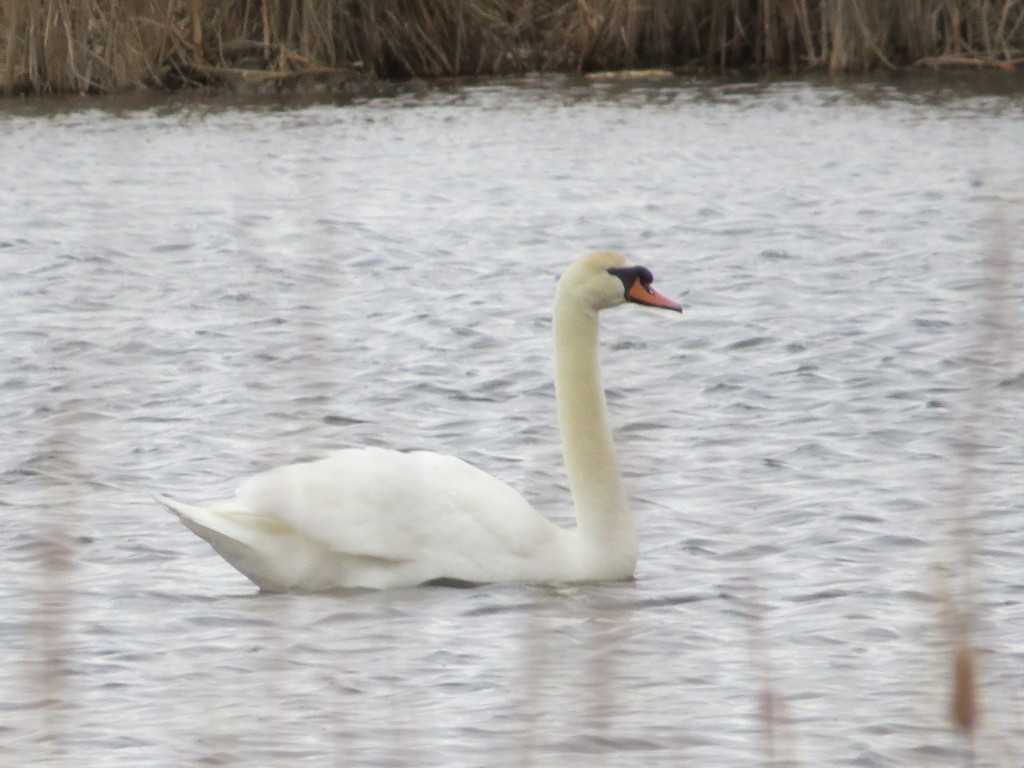 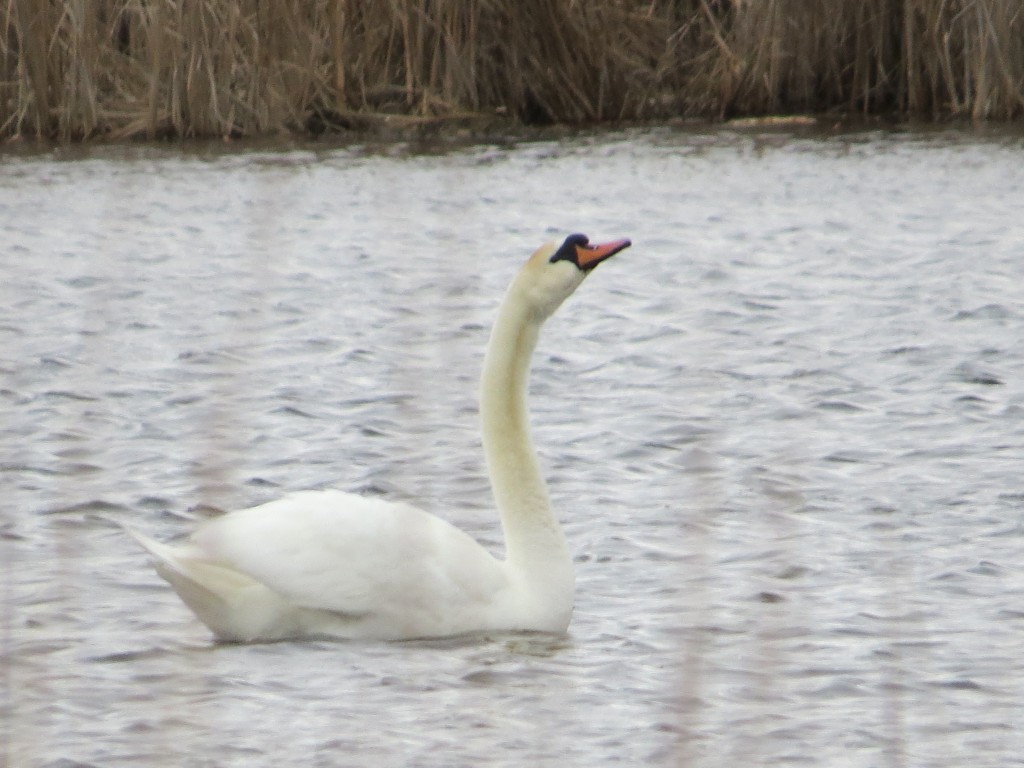 Wow, what a find! This species was introduced to the United States and is actually an invasive species in certain areas that threatens the comeback of the Trumpeter Swan. Nevertheless, not a lot of them show up in Minnesota.  In fact, the one we found this evening is a Renville County first record!  It was truly an exciting find and one that made me fumble with my phone trying to put out a lightning-fast post on the listserv so other interested birders could see it too.