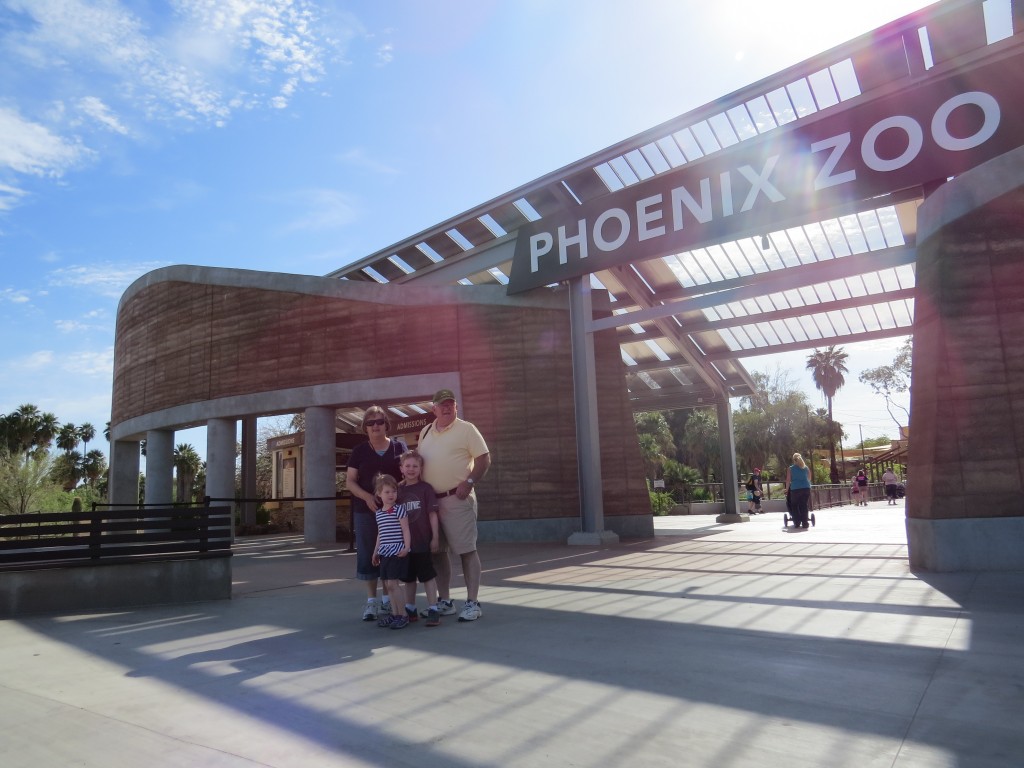 From a birder’s perspective this final Arizona post may feel anti-climatic given the previous posts on Burrowing Owls as thick as flies, an adreneline-pumping Long-eared Owl chase, and my non-Arizona discovery of an Arizona-type bird back in Minnesota. However, this post is about the high point of our family vacation. Or I should say it was about the only fun we got to experience as a whole family with Marin being sick the entire trip.  But hopefully there are enough birds in this post to keep the birders scrolling down and it won’t just be entertaining for long-lost relatives and friends.

It felt great to see Marin healthy and be able to salvage one day of vacation with Marin by getting her out of Grandma and Grandpa’s house to go to the Phoenix Zoo. Everybody was excited. Even the birder – there had to be some bits and scraps of life birds out there to pick up.  But even if we didn’t find any, it was still good to see this monkey smile. 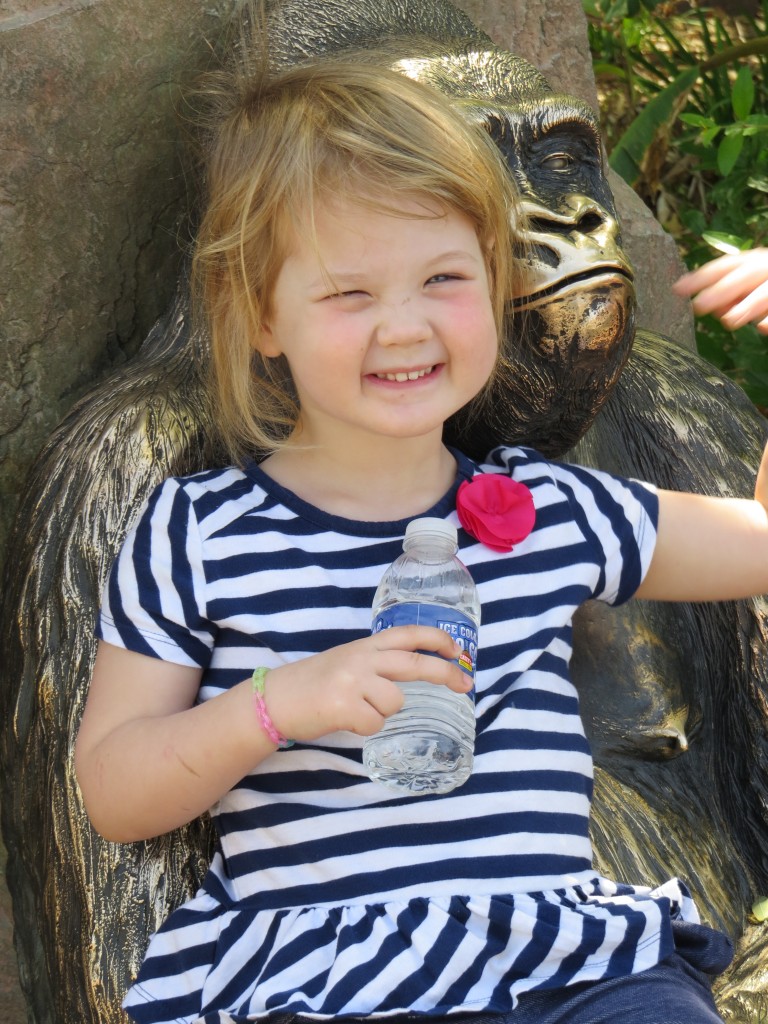 As we strolled through the zoo enjoying the somewhat cooler day with a breeze, the boisterous Great-tailed Grackles could be heard everywhere.  I finally started to understand why some people call them a nuisance bird.  Adding to the cacophony were many Curve-billed Thrashers. 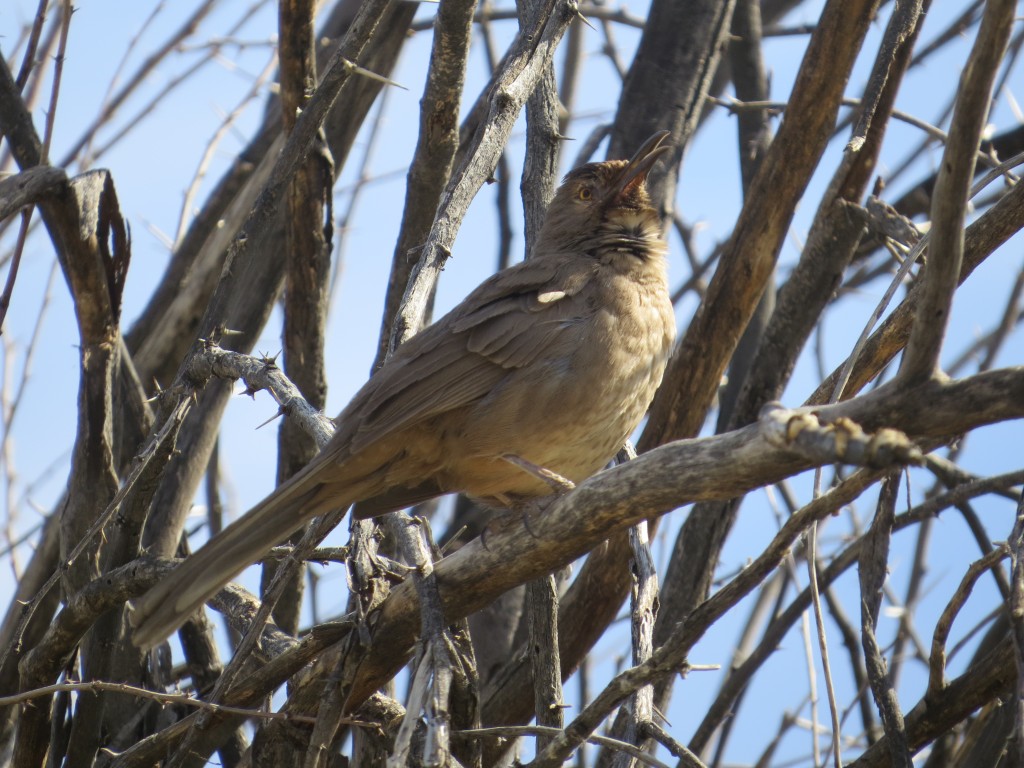 I noticed another little bird in a tree that I didn’t recognize.  Zooming the camera on it, I saw it was a lifer – the Inca Dove!  I didn’t realize how much smaller they were than Mourning Doves – I kind of passed over that detail in the field guide. The scaly appearance was a dead give-away on this one.  I grabbed Evan to come back and see it.  The non-birding family went on to look at non-birding things, like zoo animals. 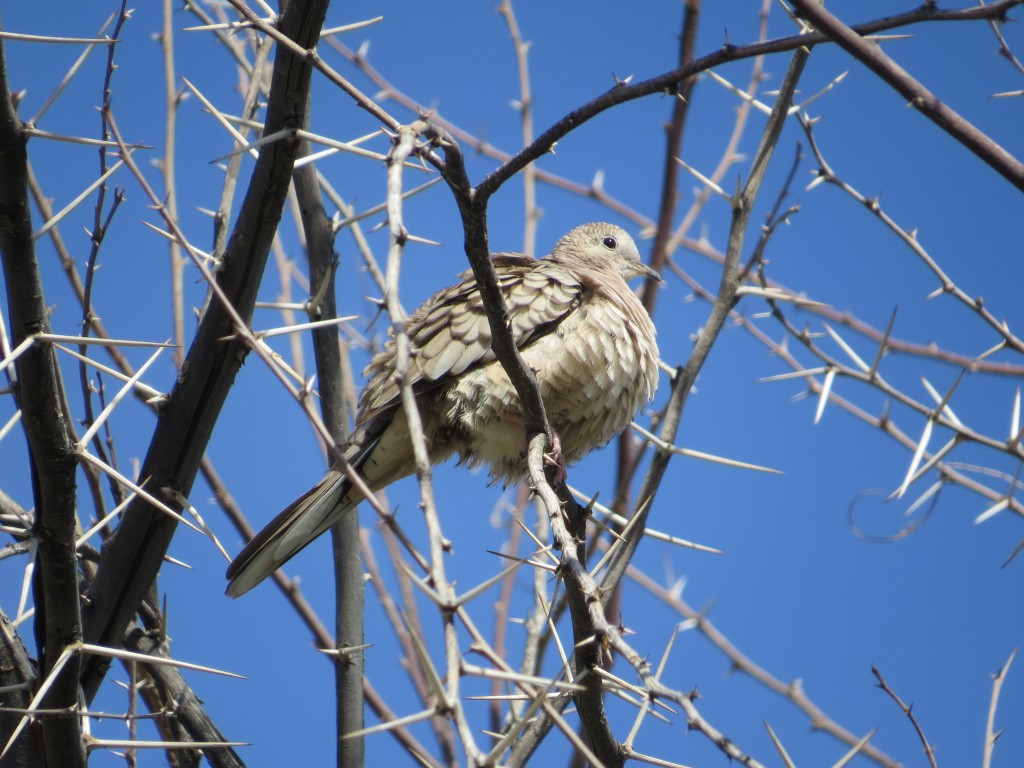 All of us were very impressed with the natural trails through a desert landscape as we hiked our way up to the Big Horn Sheep pen.  I got some killer looks at some of the birds we had seen earlier in the week, like this Black-chinned Hummingbird. 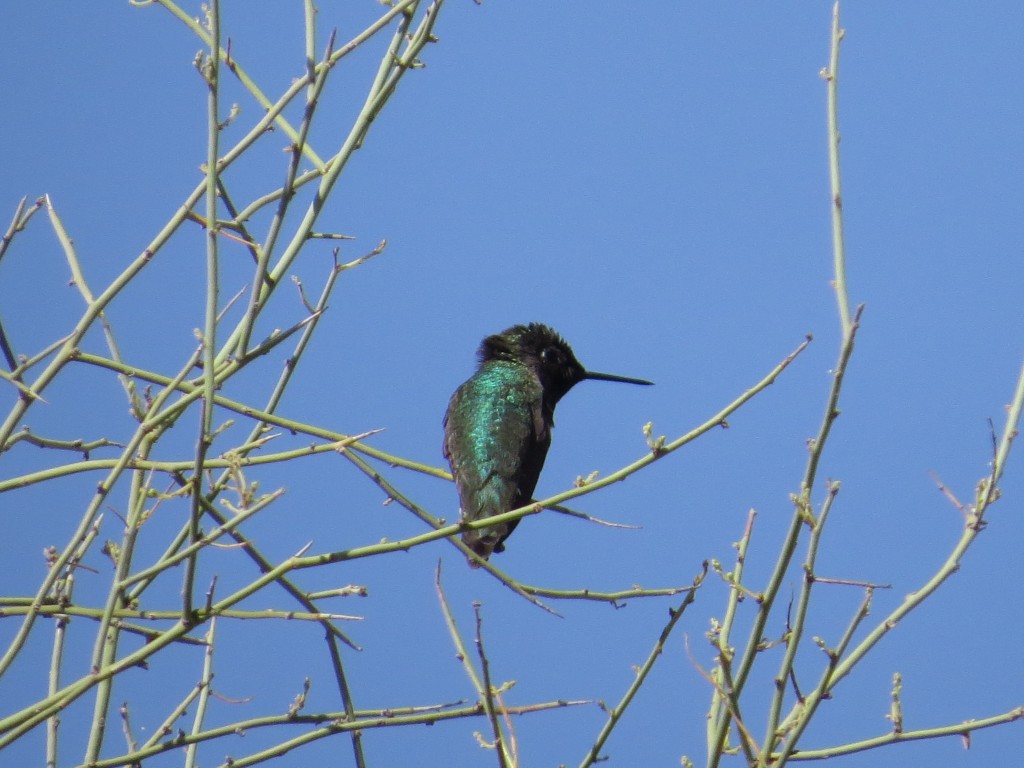 Or the Gila Woodpecker. 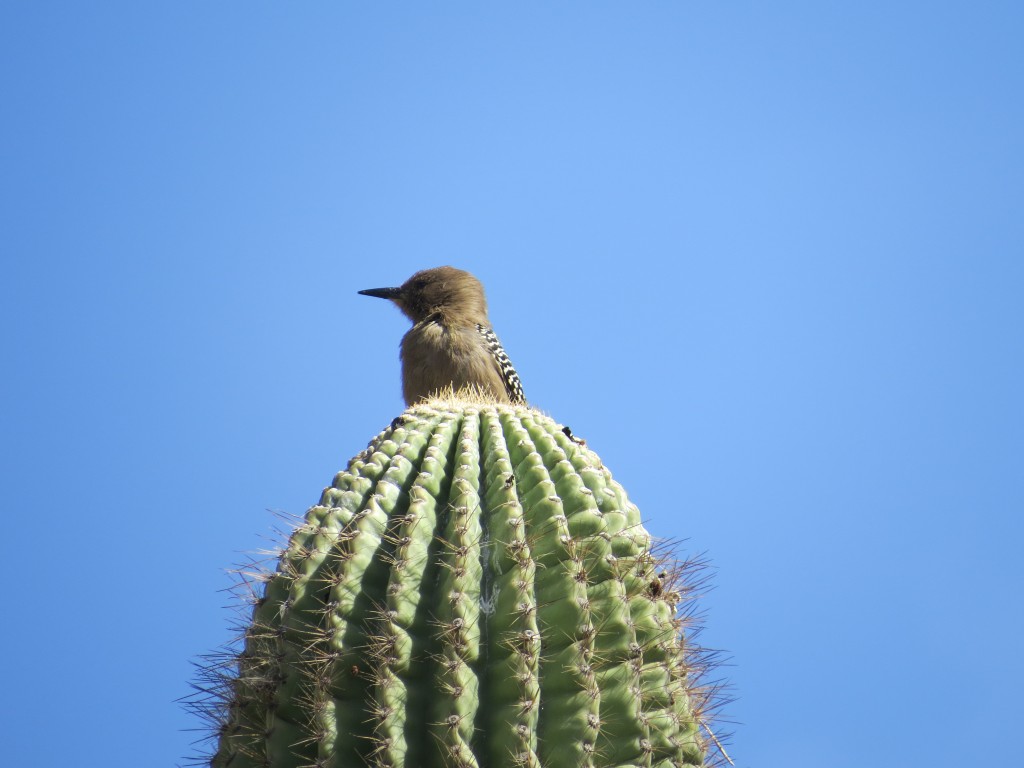 It was a real treat to be able to get a good look at the Abert’s Towhee and have Evan get this lifer.  I saw it on that desert adventure with Laurence Butler, but it was so dark that when I took a picture that night, all I had to show for the Abert’s were two glowing eyes in a black picture.  I think this one’s a lot better. 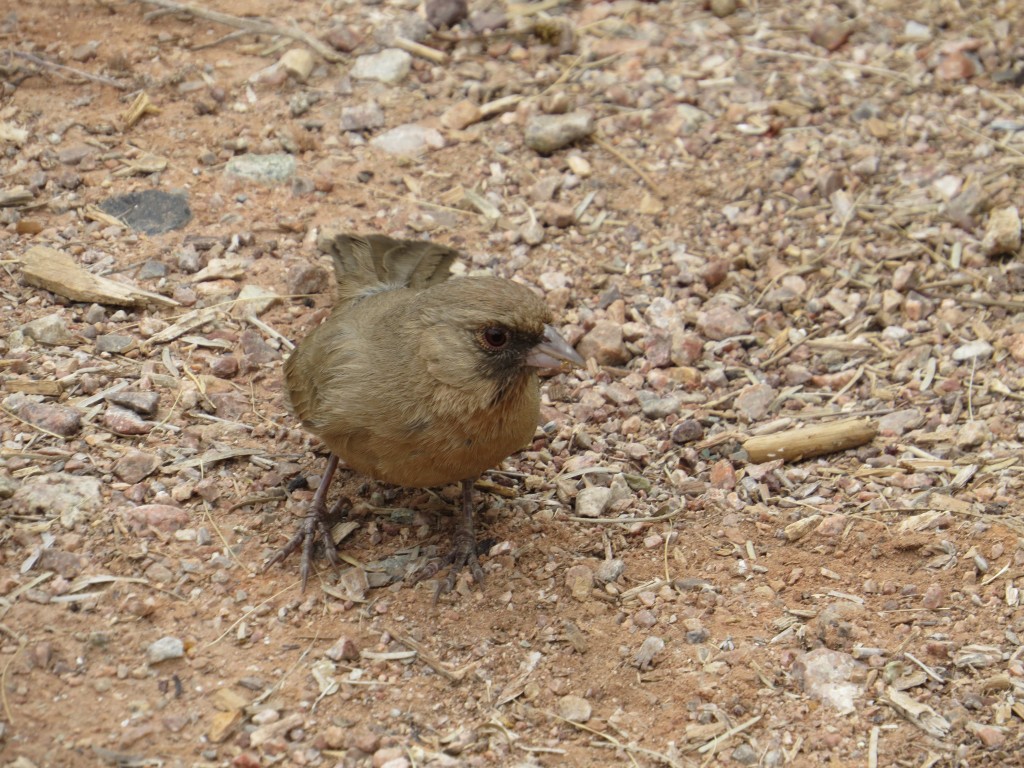 I could tell this zoo story by recounting all the animal species we saw, but the truth is that I wasn’t paying a whole lot of attention to them.  Nope, I was looking for the ones that didn’t require a paid admission to see.  That being said, I couldn’t resist this photo op.  There’s just something funny about kids laughing at monkey butts.  Go ahead, try not to smile. 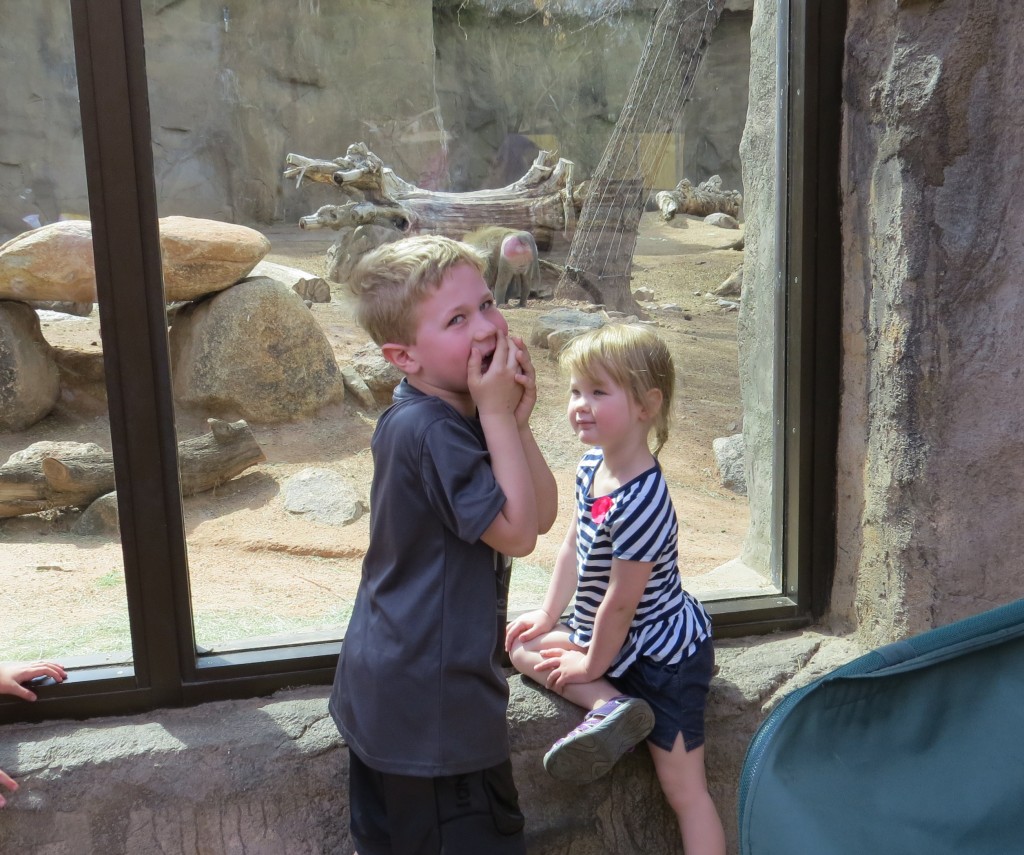 Speaking of butts and getting back to birds, this modest flicker wouldn’t show me her underside to see the yellow that would confirm it as a Gilded Flicker instead of a female Red-shafted Northern Flicker.  I’m pretty sure it’s a Gilded.  I’ll go with it.  Regardless, I like how this flicker is acting like a bird dog by being “on point.” 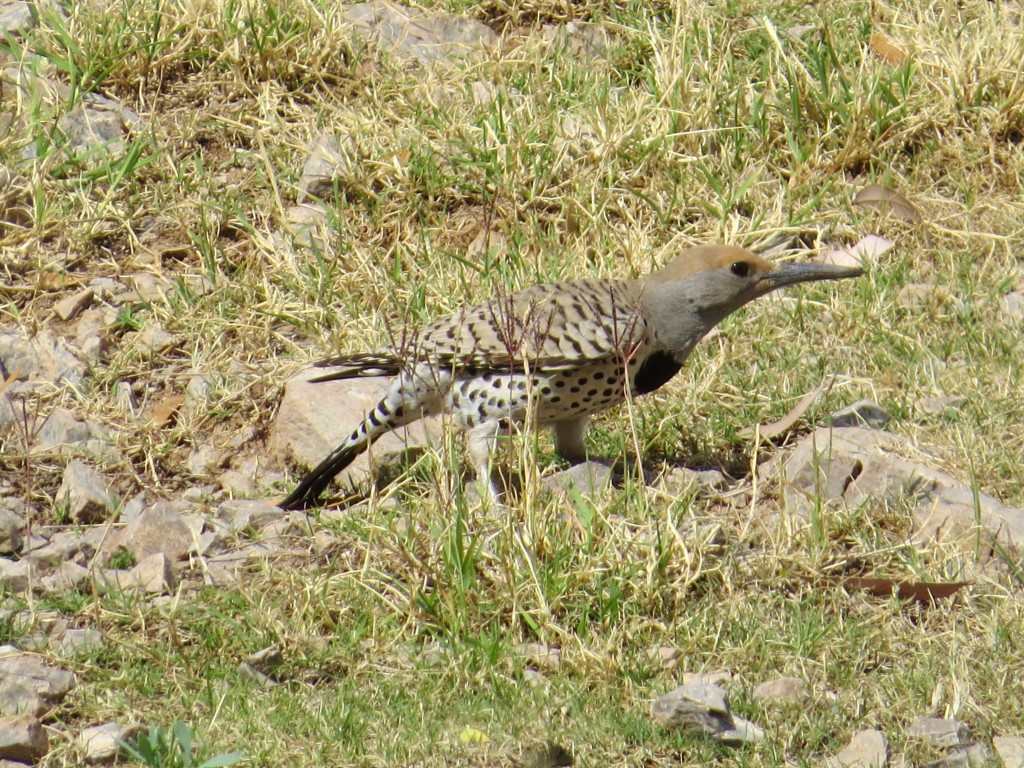 At one point when we were looking at something that was neither butts nor birds, Evan hollered, “Dad, look at that! We’ve got a new bird!” He was right! It was the Common Gallinule lurking in the shadows of this murky water.  Then I thought, ‘Wait a second, we’re in a zoo and this bird is some animal’s pen.’  I quickly scanned all the signs for the enclosure.  No Common Gallinule – sweet, we could count it!  I went back for a second look not long after, but he sneaked away to his lair of grasses and shadows. 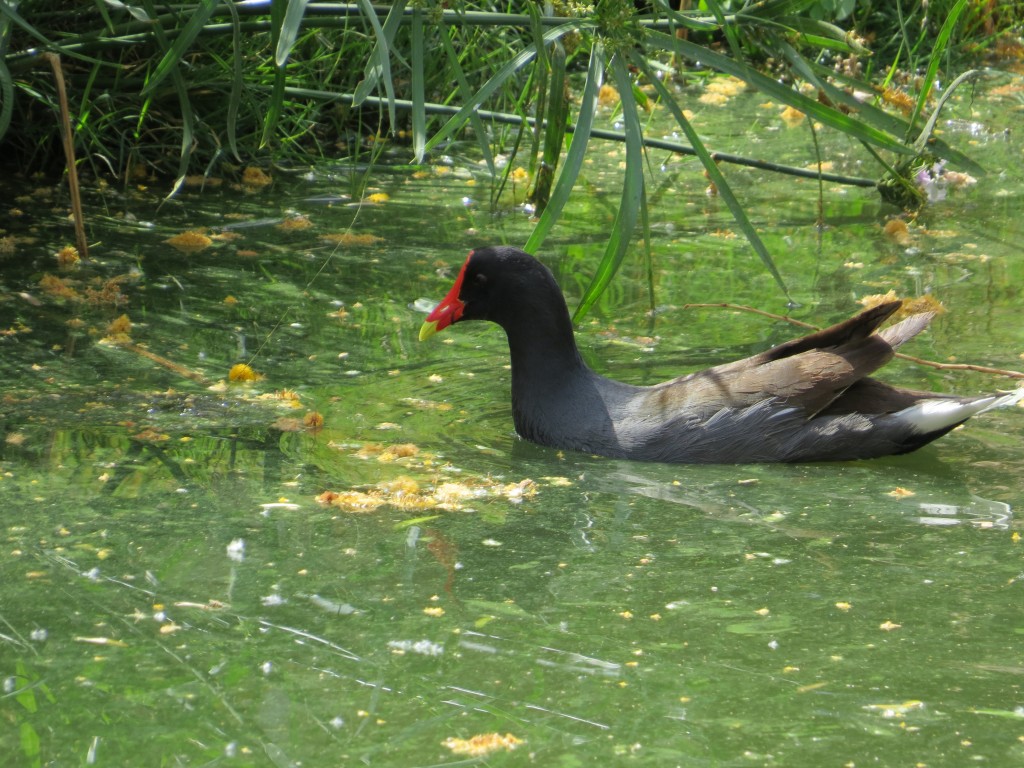 Nice job spotting the shadowy lifer, Evan.  That deserved a ride on one of those non-bird things we came to see. 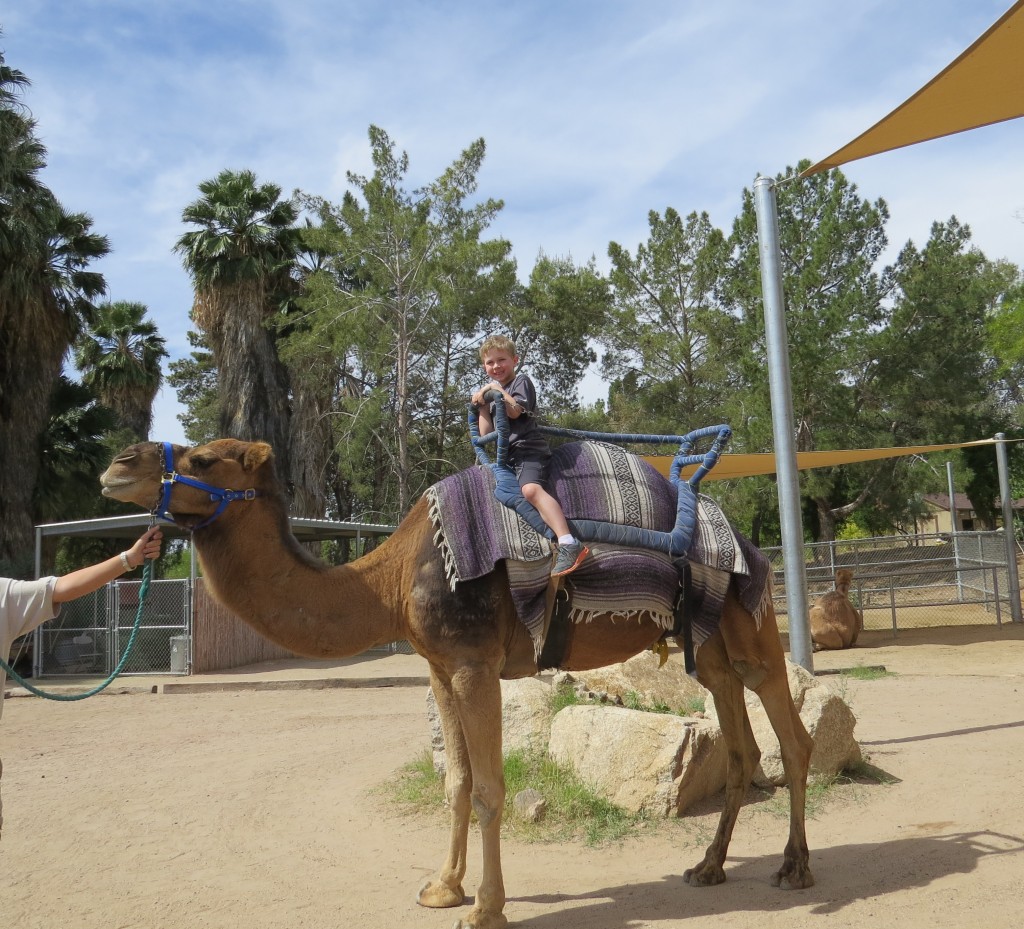 At one point along our journey through the enormous Phoenix Zoo, I spotted an Anna’s Hummingbird.  It was not a lifer on this day nor a particularly exciting bird, but I was pleased to finally properly photograph one of these buggers. 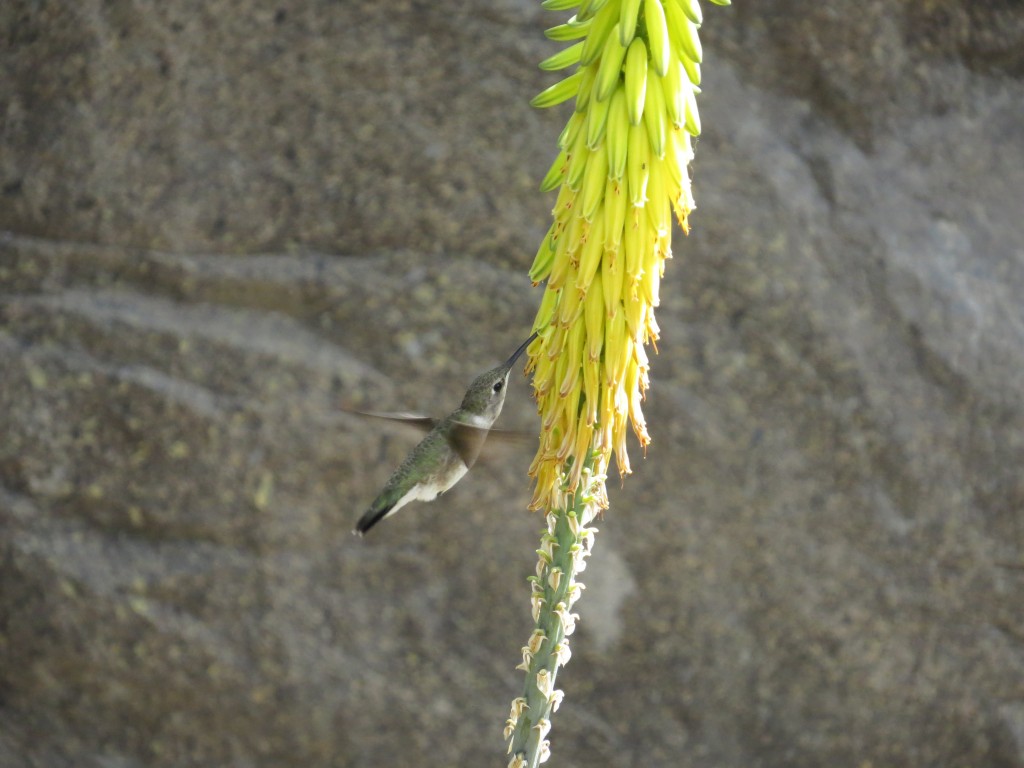 Evan, once again, found it much more entertaining to tease the Mallards in this flamingo enclosure.  Sorry, they’re not “real” birds, so I left them out. 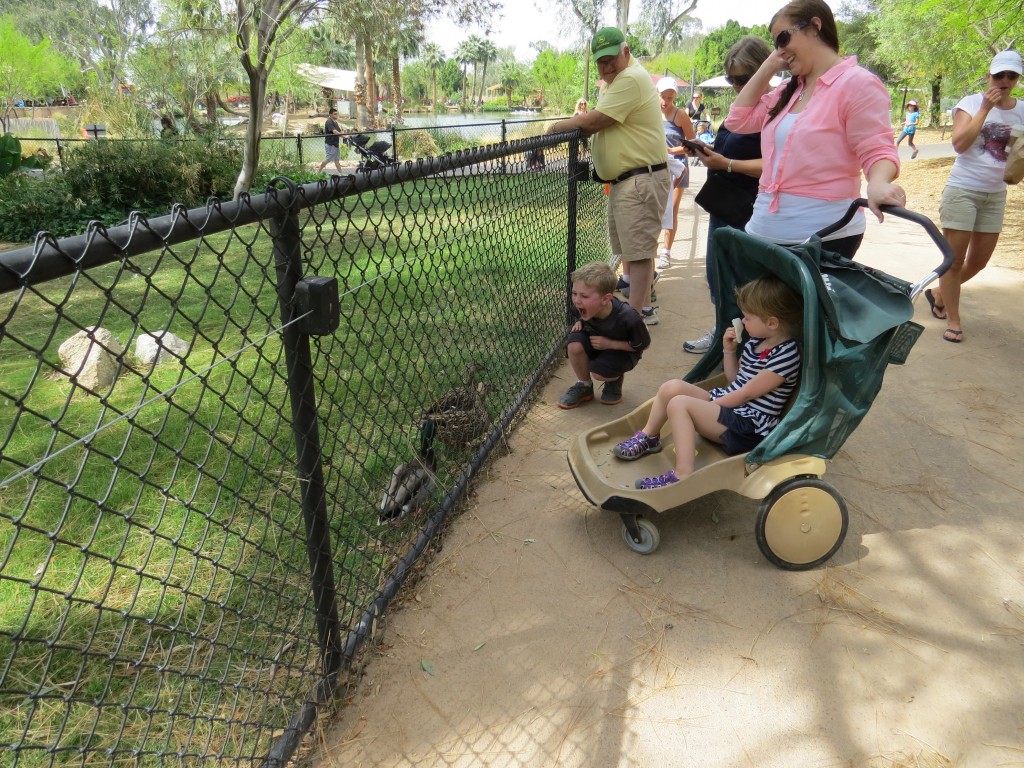 I found the wild birds much more entertaining.  I absolutely love American Wigeon.  This was my chance to properly photograph one.  Forgive the scuzzy flamingo water and just look at this drake’s beauty. 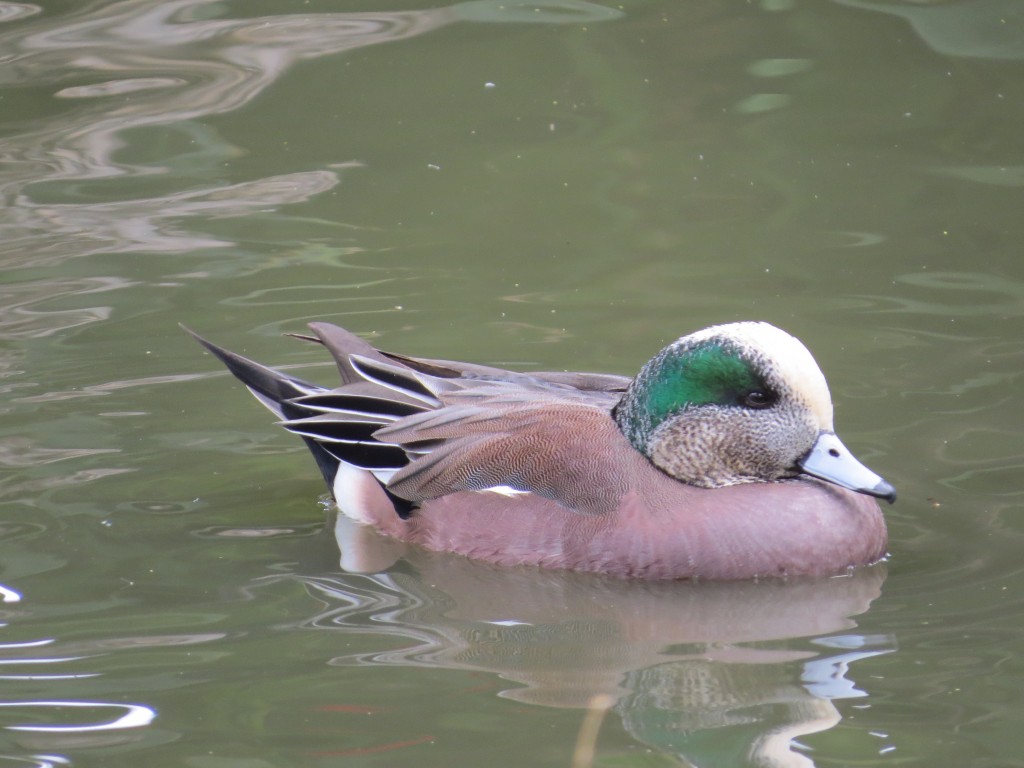 We also spied another (or the same) Common Gallinule being sneaky again – this time stealing food that wasn’t his.  It was pretty funny to watch him fall in this bucket a couple times. 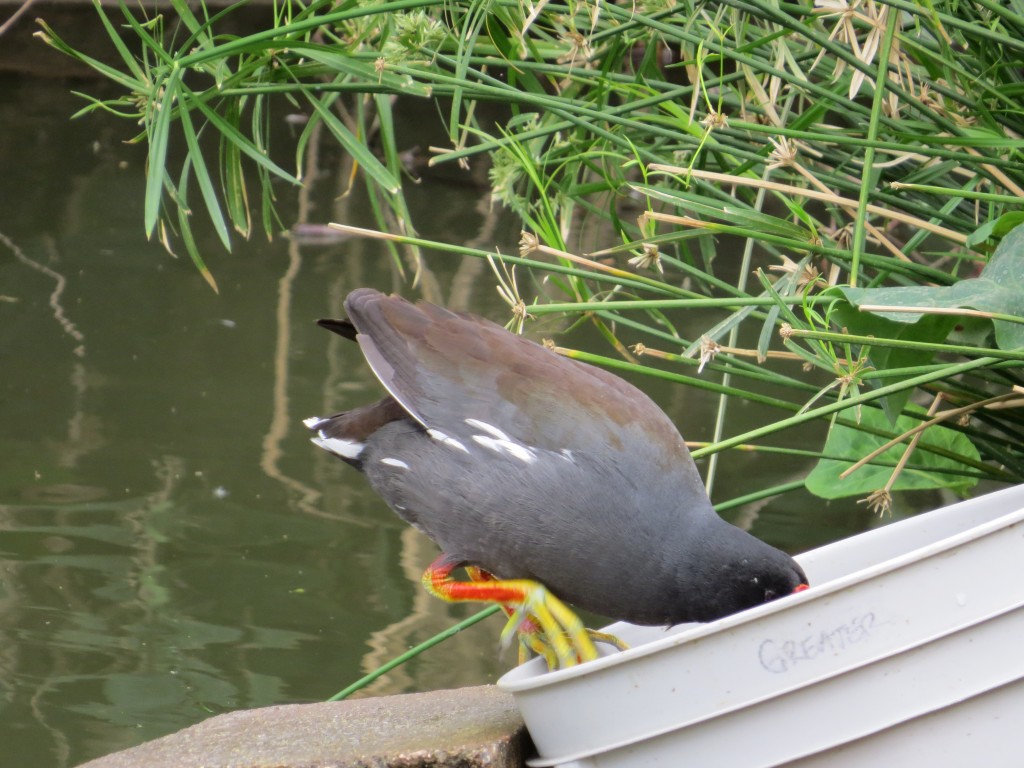 Later on when we were all lounging by the Zebra enclosure, Evan once again hollers, “Dad, a new bird!” We looked in the enclosure, and there, wading in a stream, was a Snowy Egret.  Once again, we checked all the signs.  No Snowy Egrets were supposed to be there, so it was fair game.  A later encounter with some Black-bellied Whistling Ducks at another enclosure wouldn’t be the same as a zoo volunteer told us those ones were part of the exhibit (clipped wings) even though they weren’t on the signs.  Oh well. 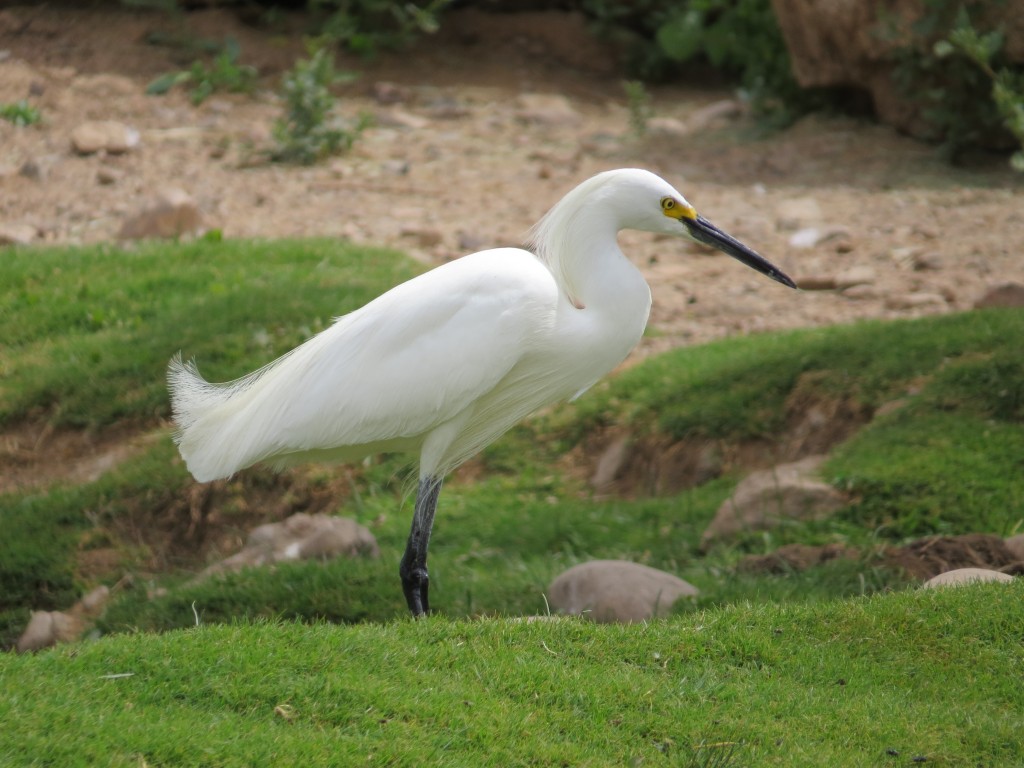 Then there was that devious gallinule again – this time photo-bombing the egret. 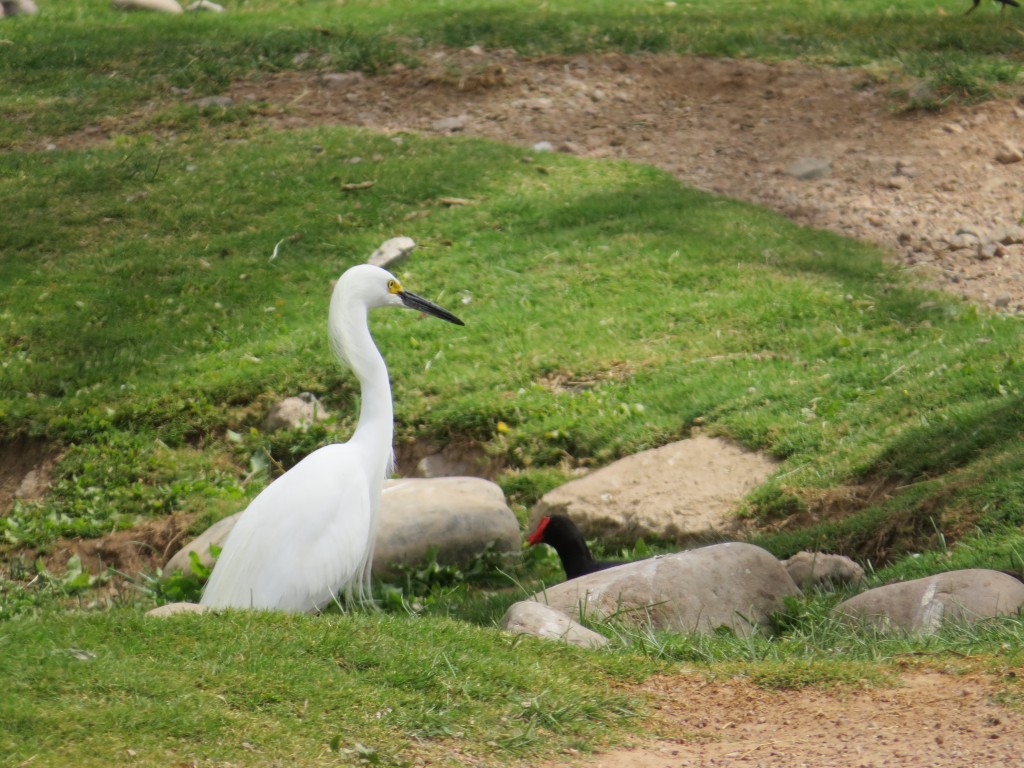 Later on we saw the gallinule in another part of the zoo acting suspicious. 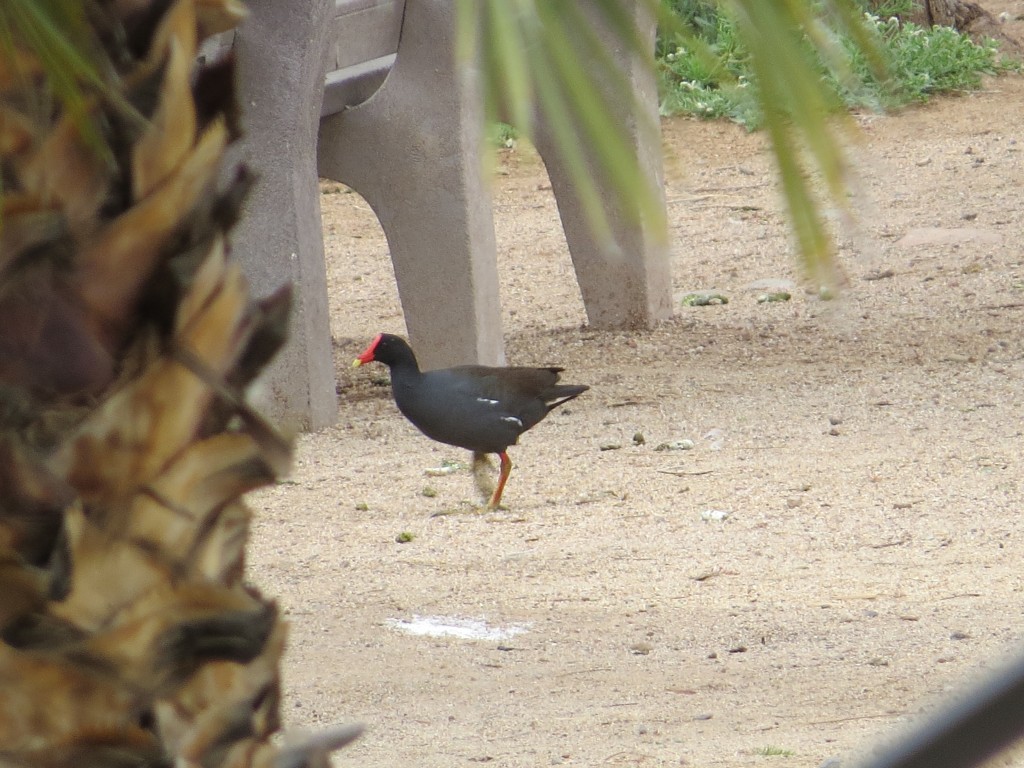 I’m not sure, but this Orangutan may have been hiding from the gallinule’s antics. 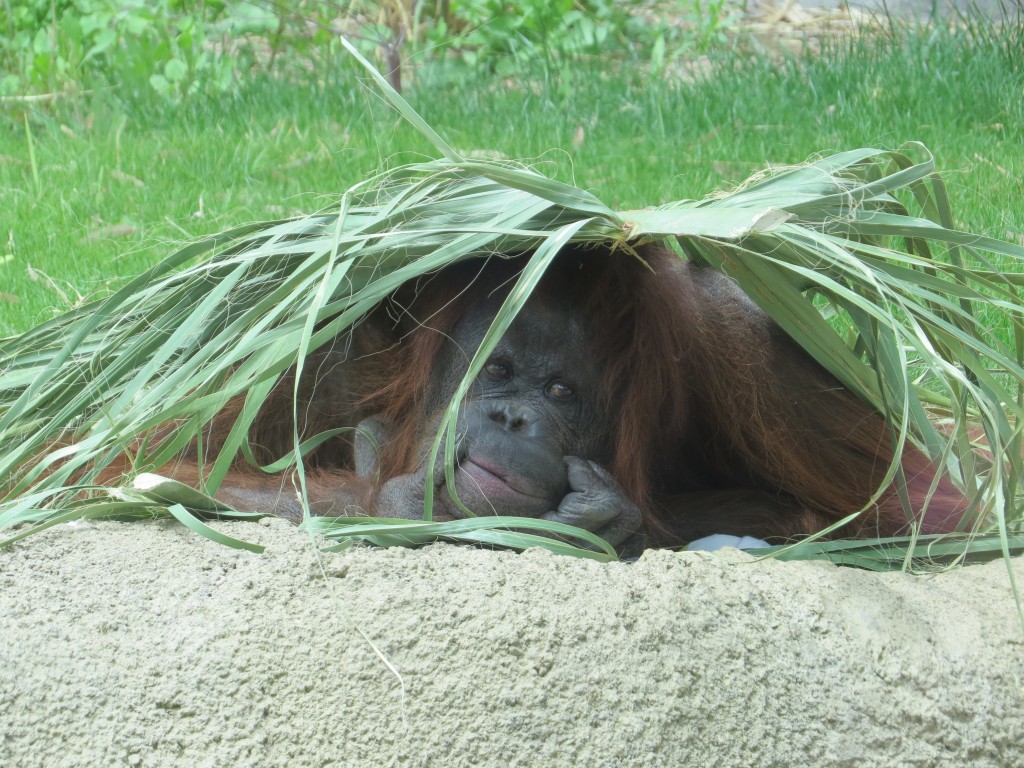 One of the exhibits that everone seemed to enjoy was the bird cage where we could walk among the birds.  I don’t know what this bird is called – some kind of crazy prehistotic pigeon probably from a land where rats are the size of dogs.  Maybe it’s just my North American arrogance, but I’m content to only concern myself with the 700+ birds on this continent and not worry about the rest of the 10,000+ that are out in this big old world. 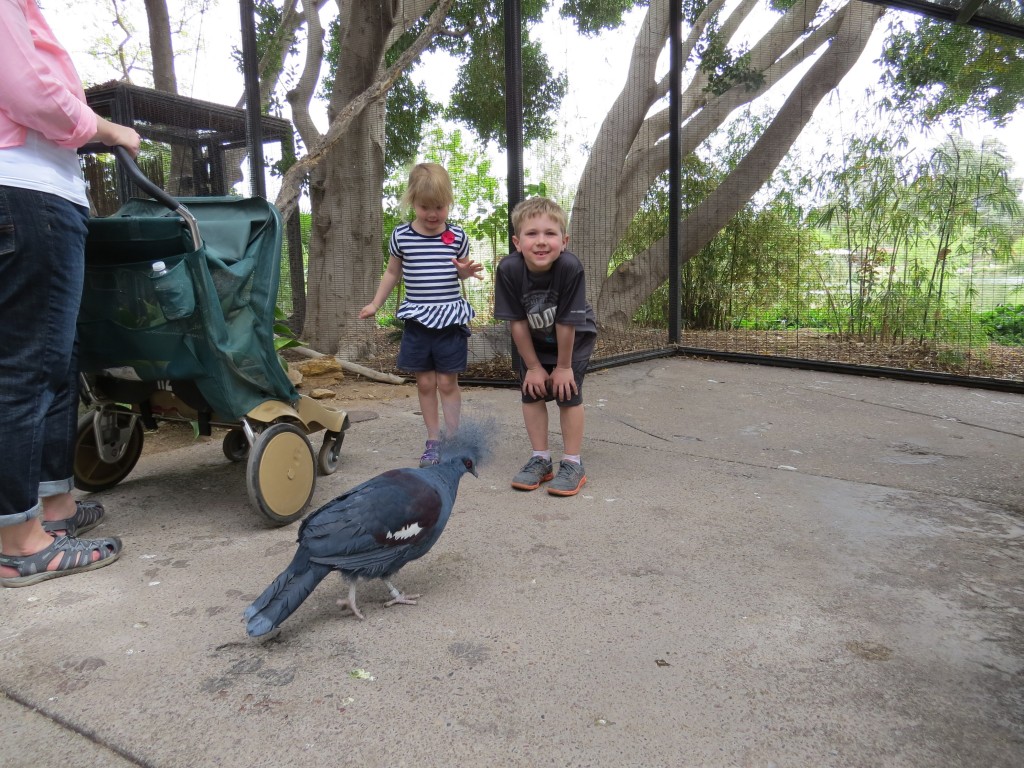 This Golden Pheasant turned all our heads, though, and made us pause long enough to remember his name. 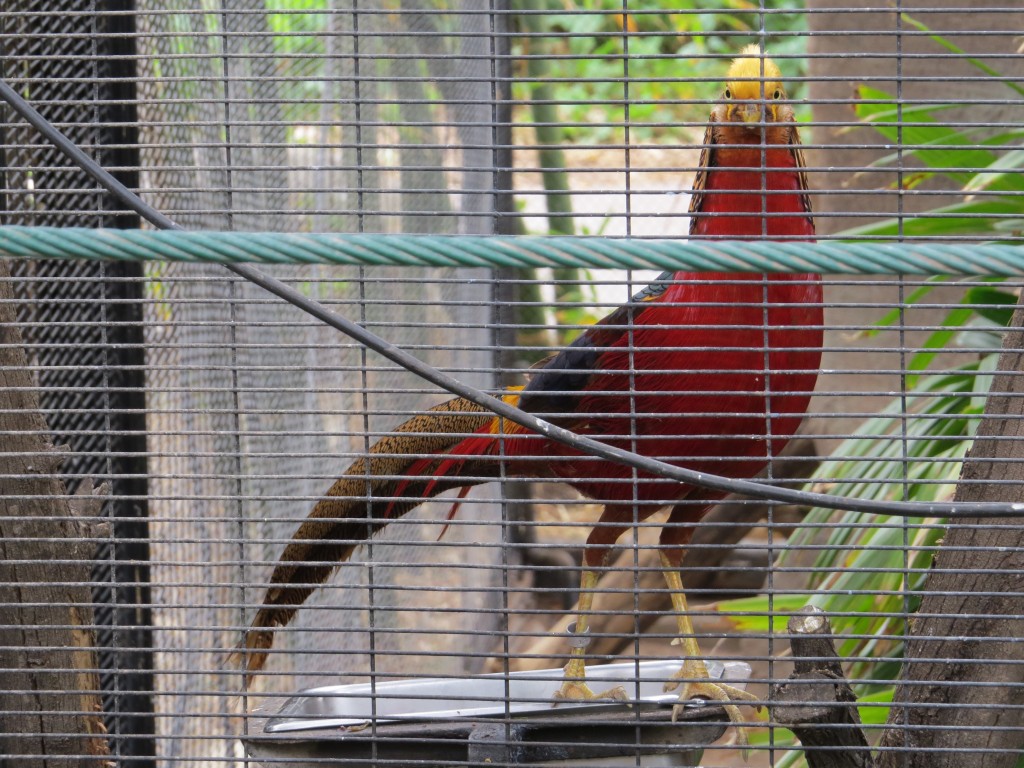 My kids found just as much pleasure with the non-living animals as the breathing ones.  Do you think Evan has seen just a few too many gator-wrangling shows on cable? 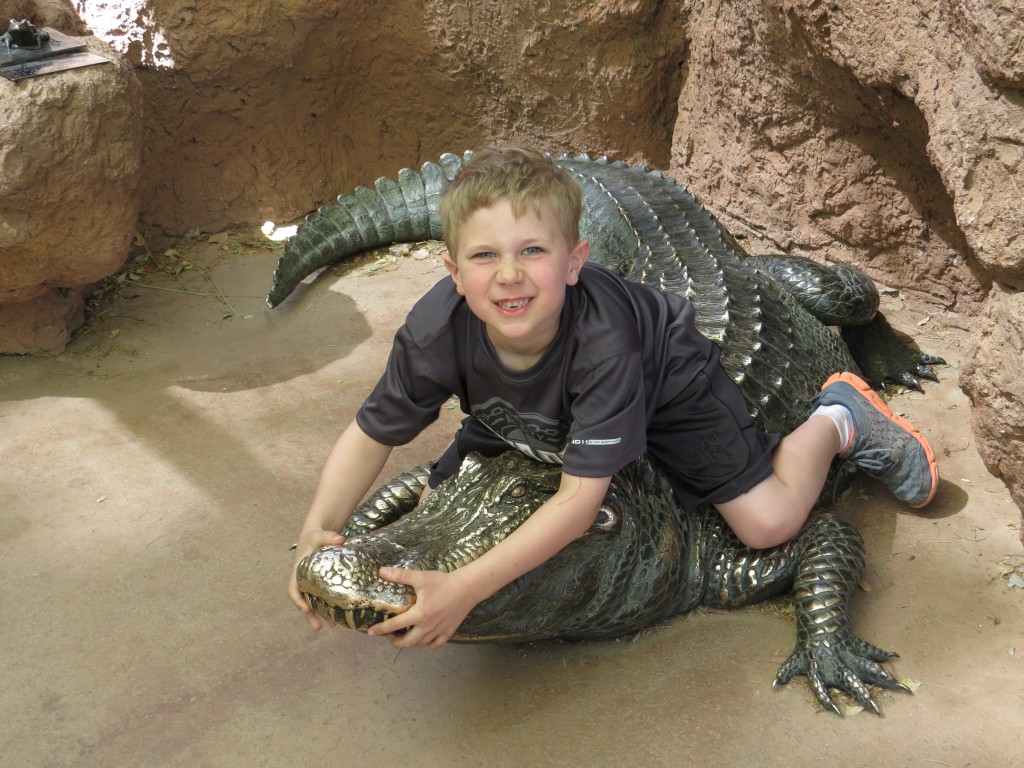 I certainly enjoyed seeing the numerous birds that aren’t “supposed” to be at the zoo.  It was a thrill to get three lifers today (four for Evan).  I also love opportunities to get a good photo of a bird that is plentiful back home, such as this Ring-necked Duck where you can actually see the brown ring on its neck for which it is named. 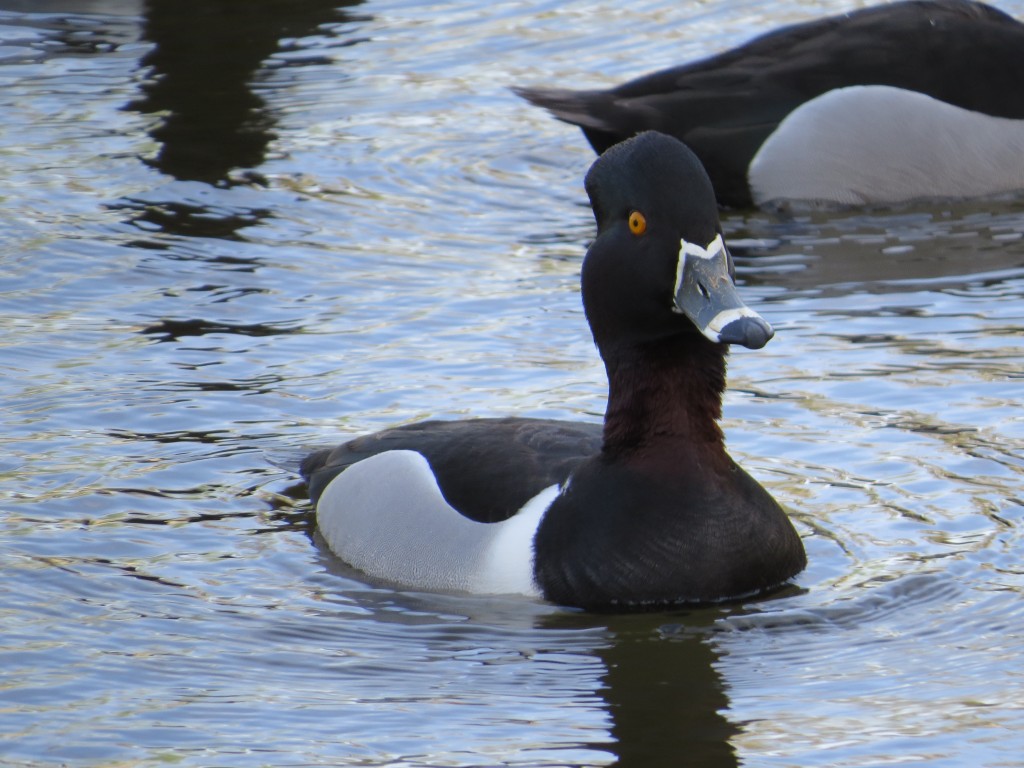 It was a good day with Grandma and Grandpa, walking around together and seeing all those birds and non-birds.  It was our last full day in the beautiful Arizona weather. Overall it was nice to get away and great for us birders to put a few more notches on the old birding belt.  We are definitely looking forward to our next visit. But, we northerners had to get back to the land of blizzards for winter’s last(?) shake of its fist. 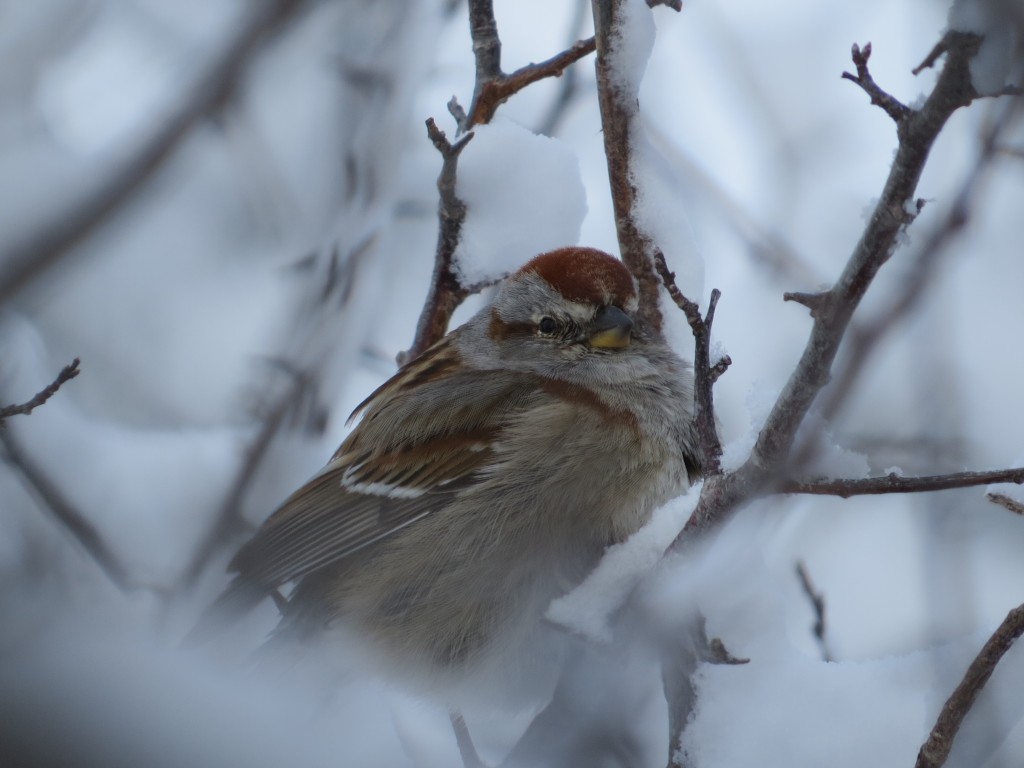