I was still itching to see a Burrowing Owl on that first day.  After all, it was the one bird I just had to see on this trip.   Even though I had already seen a good number of lifers on the first day, this was the itch I had to scratch.  And it was only more aggravated by spending a very frustrating three hours in an urgent care clinic in Maricopa to try to get some answers regarding our sick daughter.

I think the Burrowing Owl was so alluring to me because I was first introduced to it by my non-birding wife.  Yes, it’s true! Melissa has taught the novel Hoot in her seventh-grade Communications class for a number of years.  This fictional tale is about a group of teens in Florida who stand up to protect a pair of Burrowing Owls whose habitat is threatened by the development of a vacant lot for a new restaurant.  In 2006 the novel was made into a movie with some big-name actors.  So, our whole family has seen this movie and been enthralled with these cute little owls.  Imagine my excitement when my dad told me he saw one last winter, and then I find out they are fairly common in the Phoenix area.

We finally made it back to the house after that long doctor visit and sat down to eat supper.  Every minute that ticked by was one less minute to look for the owl.  My rational brain told me that we had several days to make it happen, but my bird brain said we had to go now.  So after supper was over, all six of us piled into the van and went for a drive. I thought we might go to the location where my dad had seen a pair of Burrowing Owls just the night before, but he had other plans.  He wanted to just drive in the country to see what we could see.  I wanted to see more new birds, too, but I really wanted to get the Burrower out of the way.  Then I could settle in for the trip.

As we drove along and didn’t find anything, I suggested that we just head back to the neighborhood to look for the one they had already found.  Dad replied that we could do that in the morning real easily.  Yes, but…

We kept driving along seeing neither a Burrower nor any other lifers.  It was excruciating to watch the sun slip down, knowing that the big goal would not be achieved today.  But just as my heart was sinking with the sun, I was jolted back to life when Melissa hollered, “Wait! What’s that?!!”  It was the the Burrowing Owl!!! 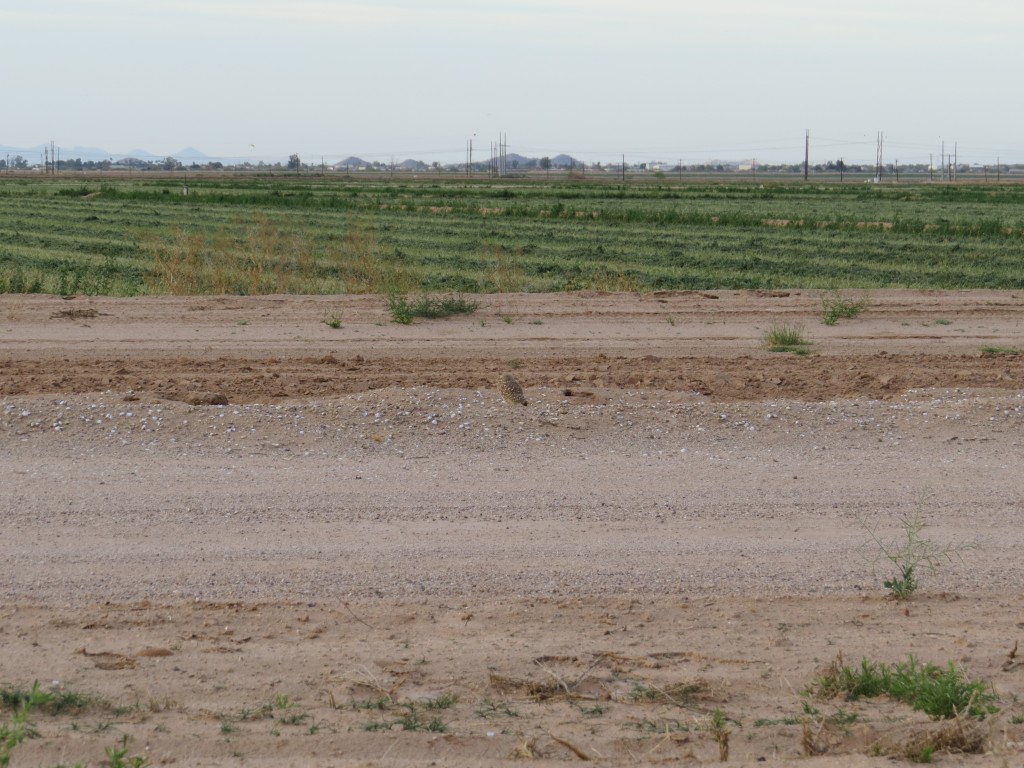 I had given up all hope of seeing one that I wasn’t even looking like a birder should.  Way to go, Melissa! Regular readers may recall that she alone found all five Great Gray Owls on that epic December day on Aitkin Co. Rd. 18.  She modestly replies that she was given the job of looking for an owl and that she was just doing her task. 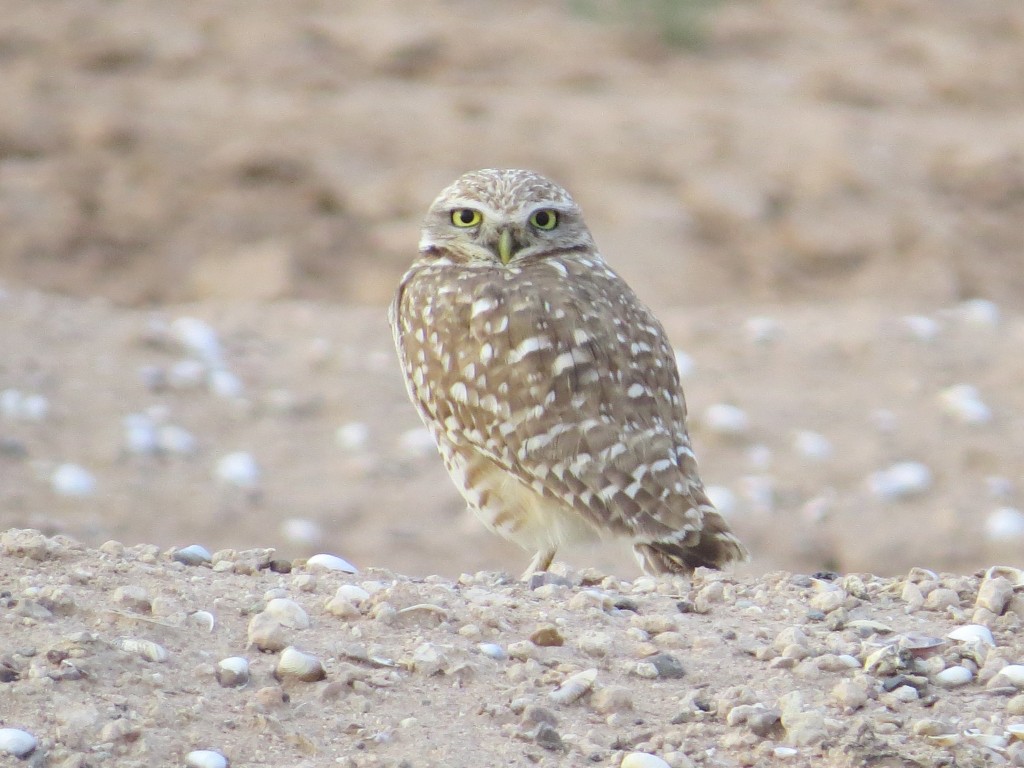 It was an intense sighting.  With spirits buoyed, we strolled along these gravel roads through agricultural fields and cattle lots. And not much later, Melissa was hollering from the back seat again!  She found not one more, but three more! 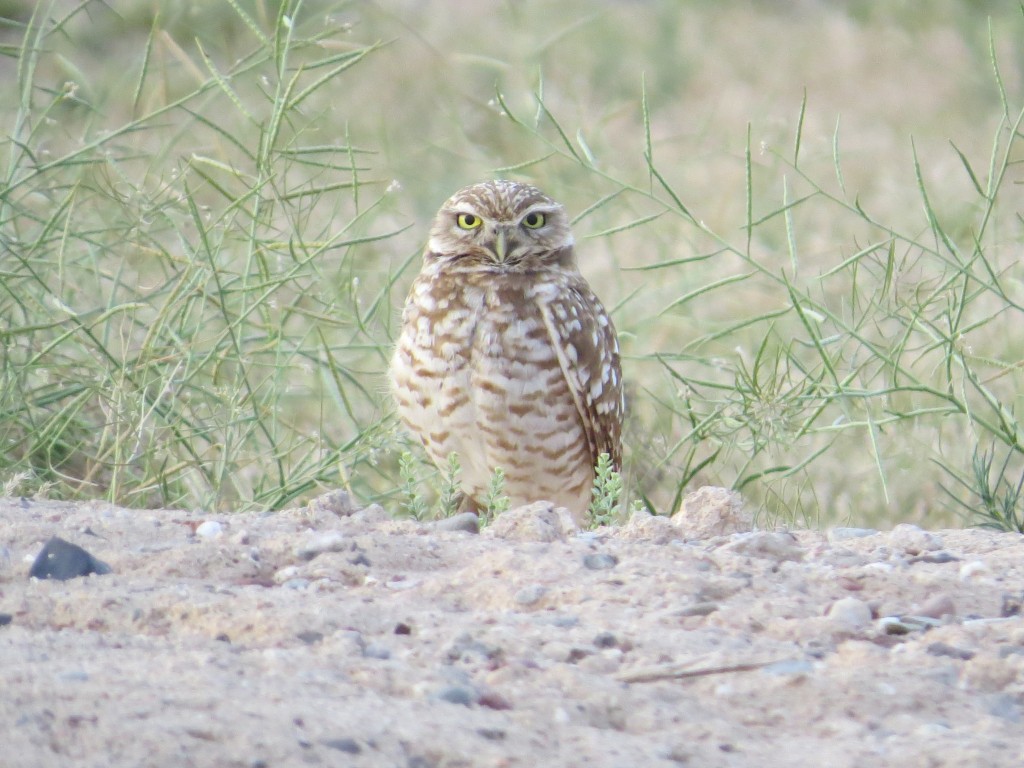 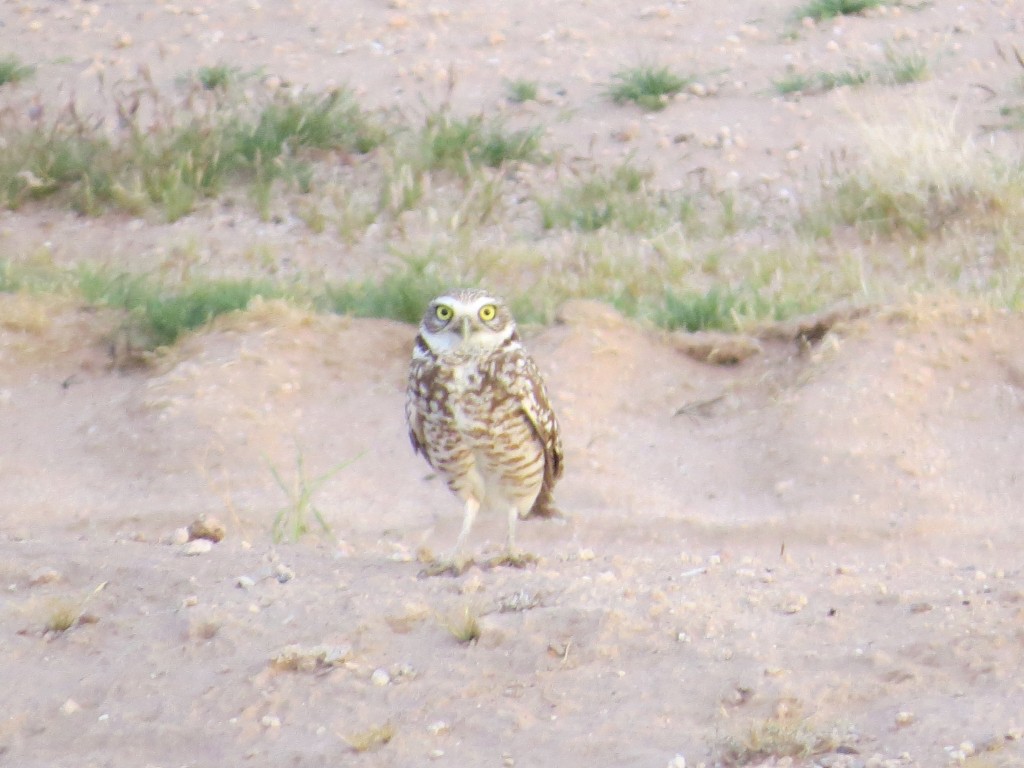 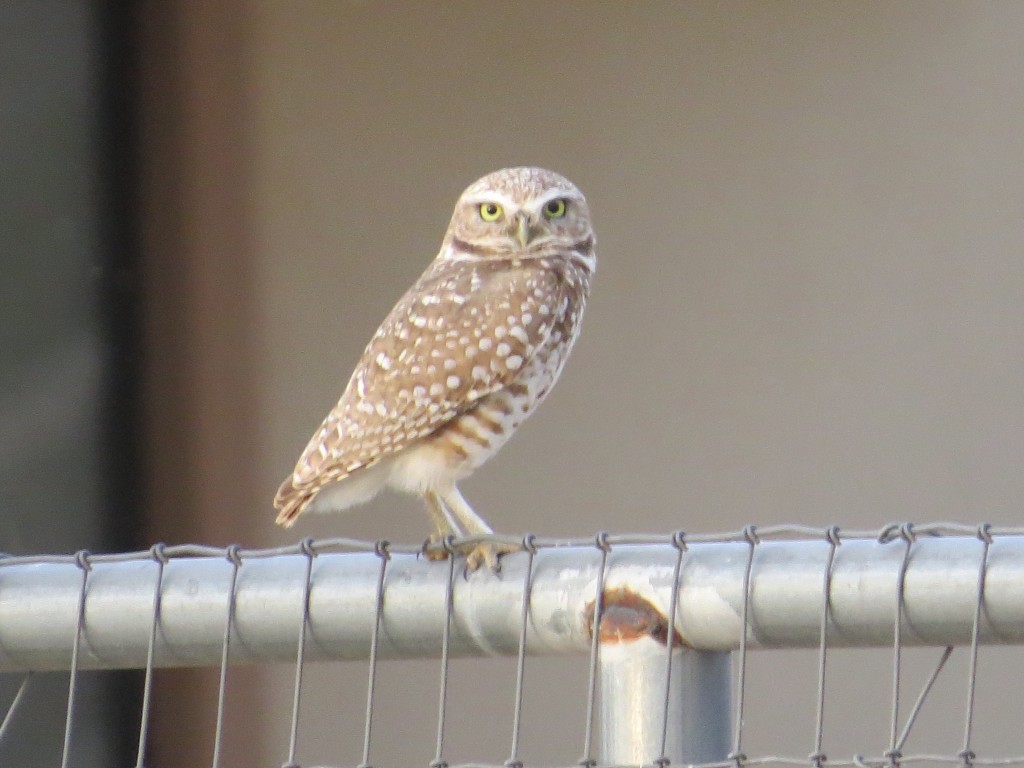 We think there may have been more than these three.  It was hard to tell with the birds moving around.  I couldn’t believe it – four burrowing owls.  Now it didn’t matter what we saw or didn’t see.  The night was already made four times over.  My disappointment of not seeing a Burrower quickly changed to being bummed that I hadn’t spotted one by myself yet. Don’t get me wrong; I was thrilled, but I wanted to find my own owl. It’s funny how the dynamics of a birding outing can change so suddenly sending you on a roller-coaster of emotions.  Call it birder mood swings.  And as the saying goes, when it rains it pours because I spotted our next lifer – the very cool Black-necked Stilt!  I did not expect to get this bird this trip. 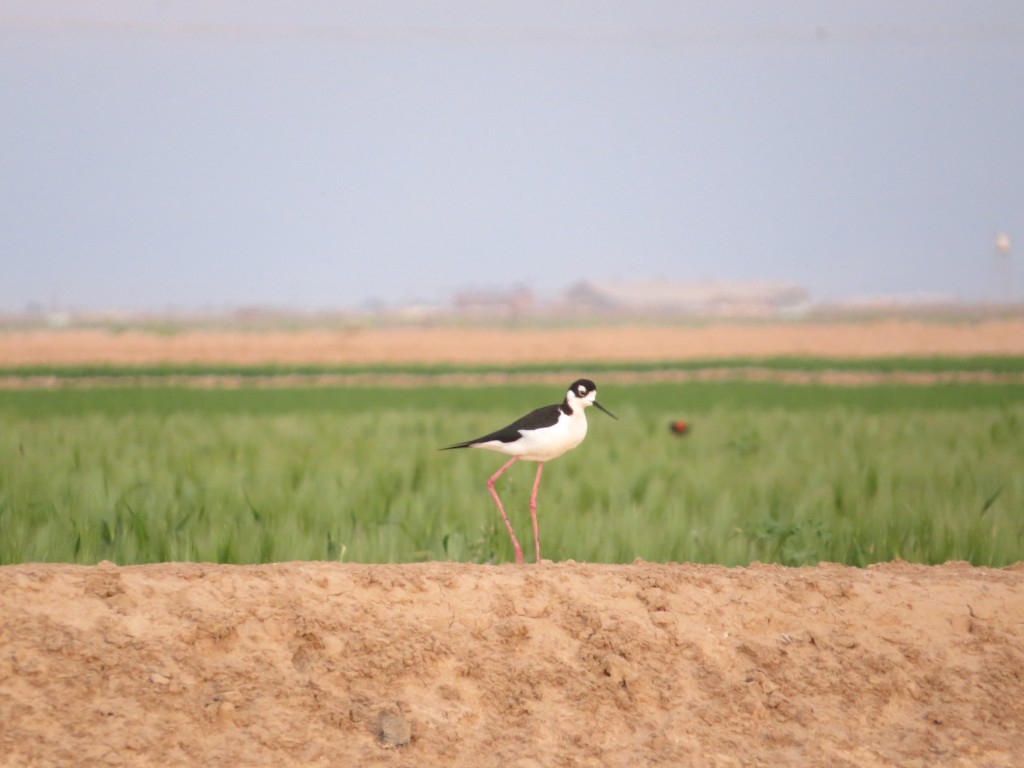 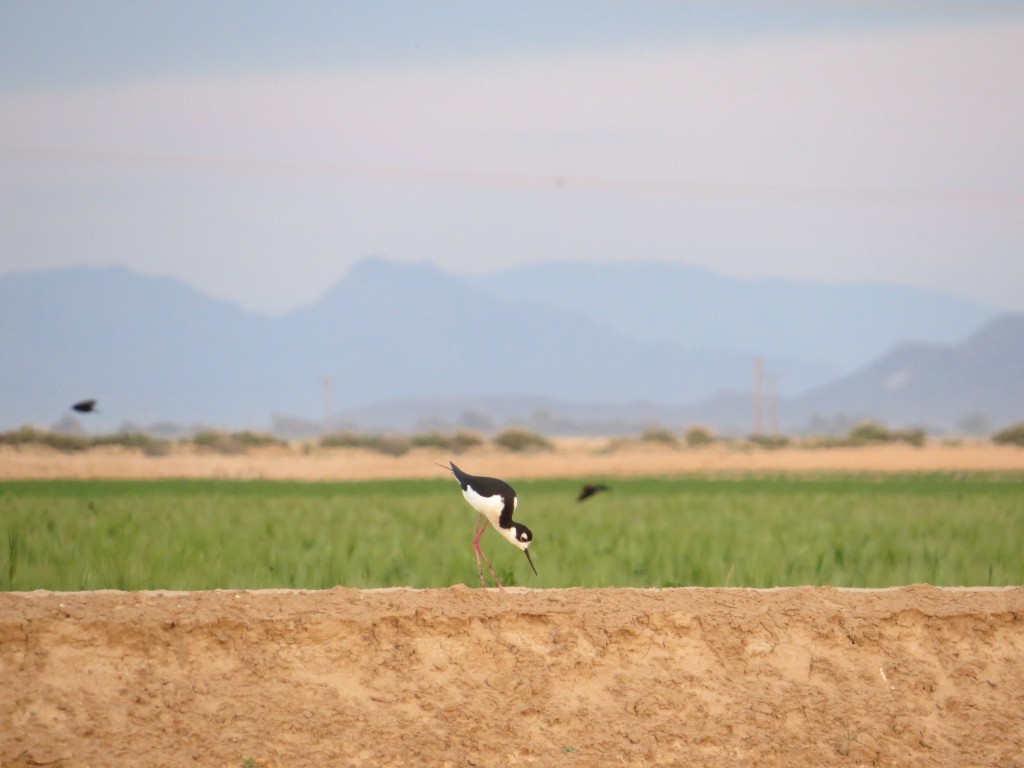 What a fantastic-looking creature. And there were two of them.  In addition to the stilts, we enjoyed the chorus of thousands of migrating Red-winged Blackbirds.  For a prairie birder, that has got to be one of the best sounds of spring.  You can see some of these birds in the background below. 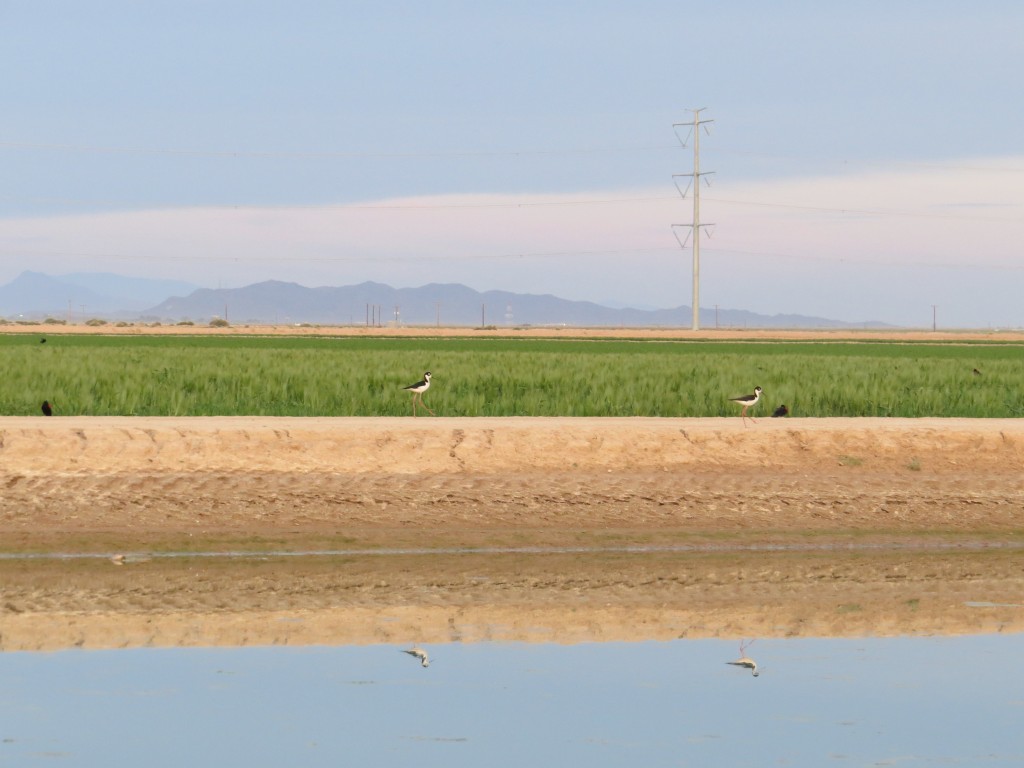 It’s pretty hard to top the night we had, but I managed to do just that by spotting my own pair of Burrowing Owls!  Then my mom spotted one herself too!  All told, there were four Burrowing Owls in this new location.  Unbelievable.  Eight Burrowing Owls for the drive. I hadn’t even seen an eBird report listing that many. 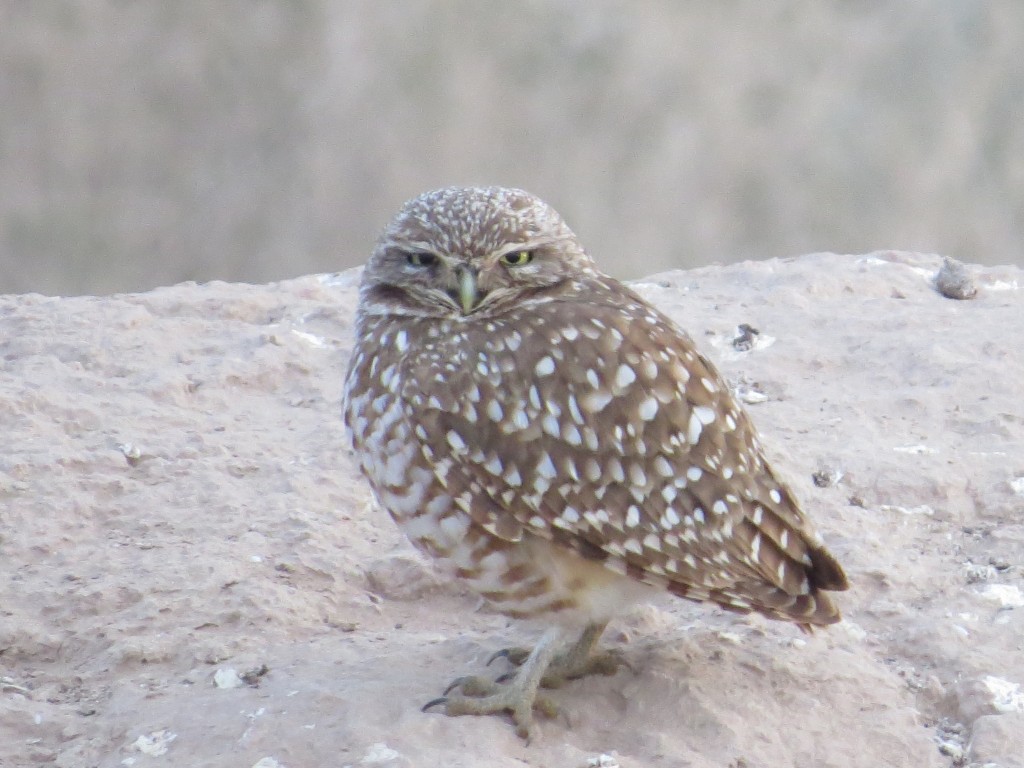 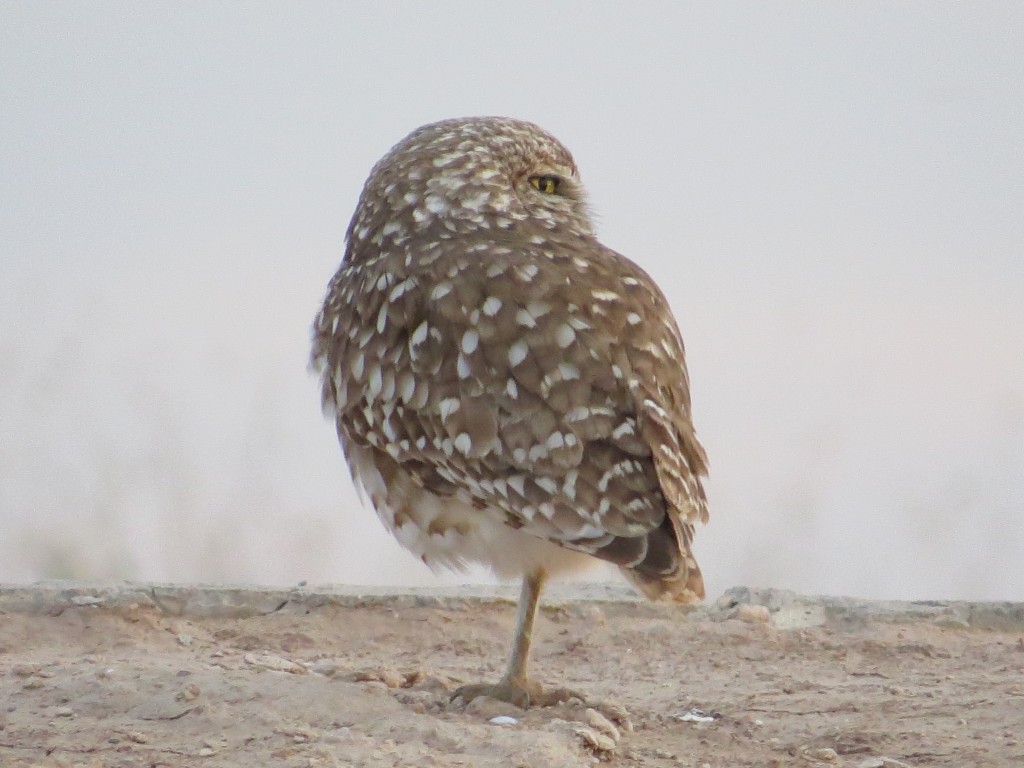 I really love these next photos as I captured a pair of Burrowers in their burrow.  The one just peeking out is classic.  We got to observe these owls walk backward into their burrow at the sight of an approaching hawk.  The poopy whitewash you see shows that these owls regularly perch at their burrows. 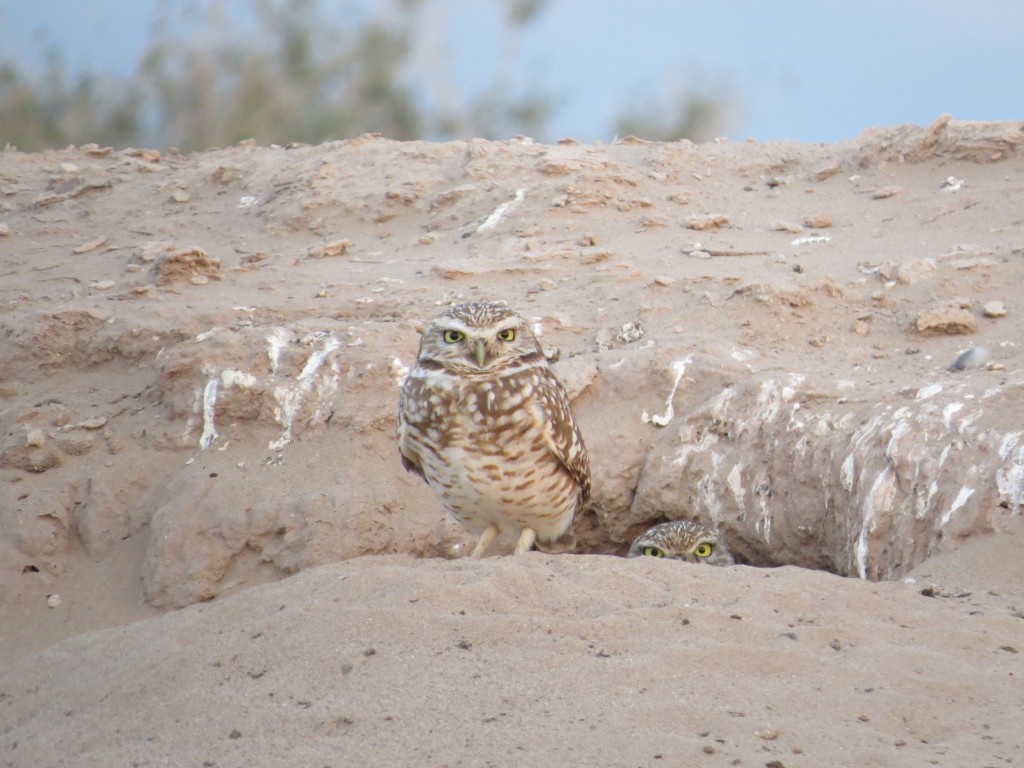 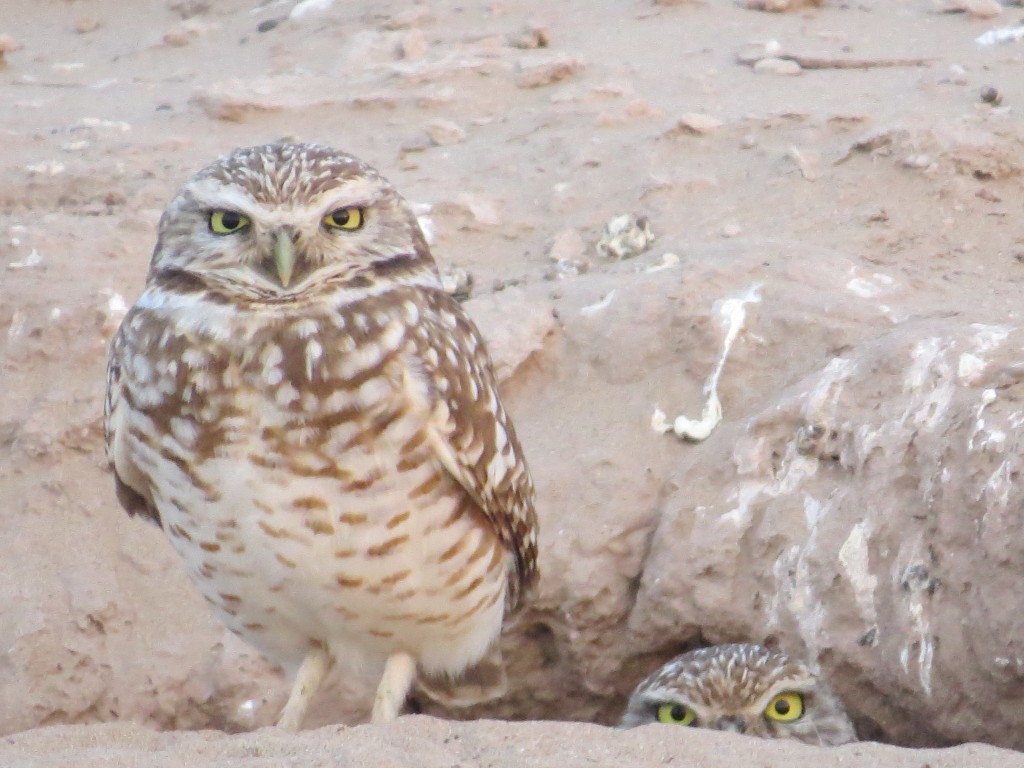 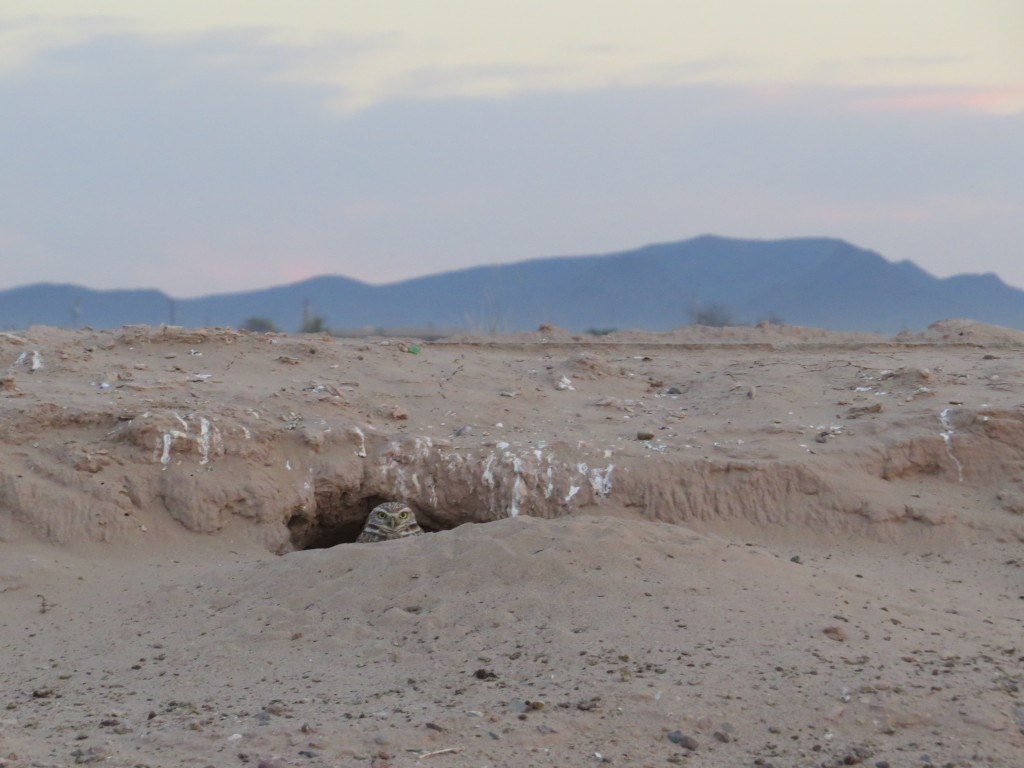 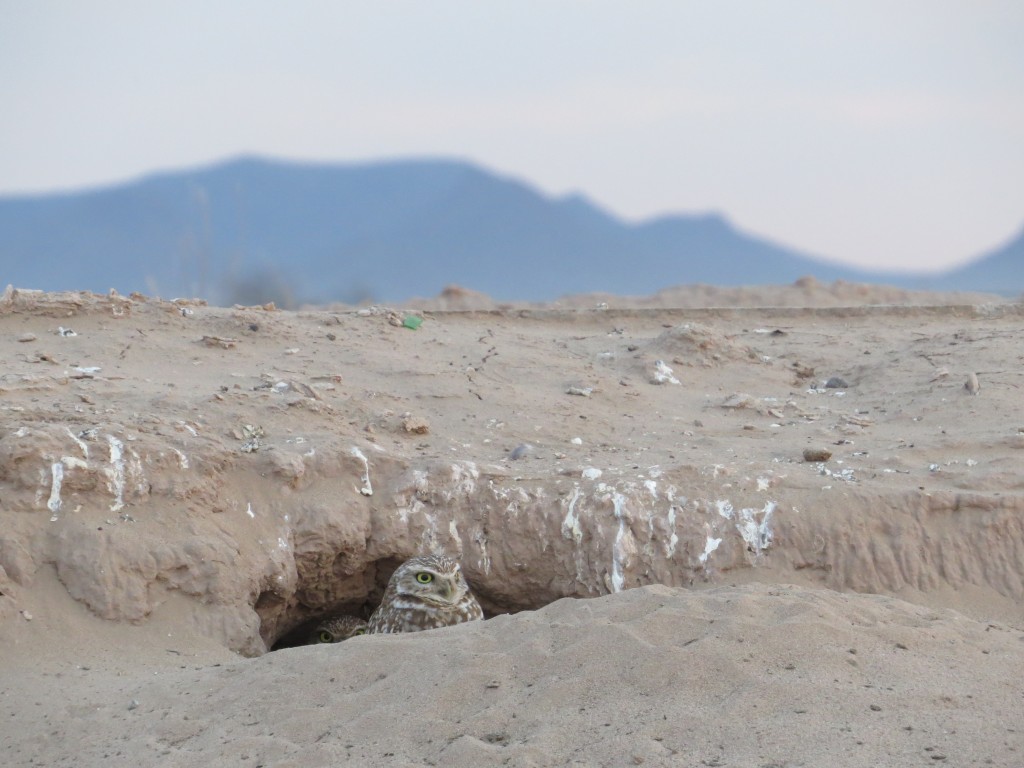 This night couldn’t have been any better.  As my dad said, finding our own Burrowers was a lot more fun than just following up on other birders’ reports.  To top it all off, we picked up our Swainson’s Hawk lifer on the way home bringing our lifer total to 11 for the first day!  And my top two targets of Burrowing Owl and Cinnamon teal were already found.  Now I could actually enjoy the sinking sun instead of lamenting its passing. 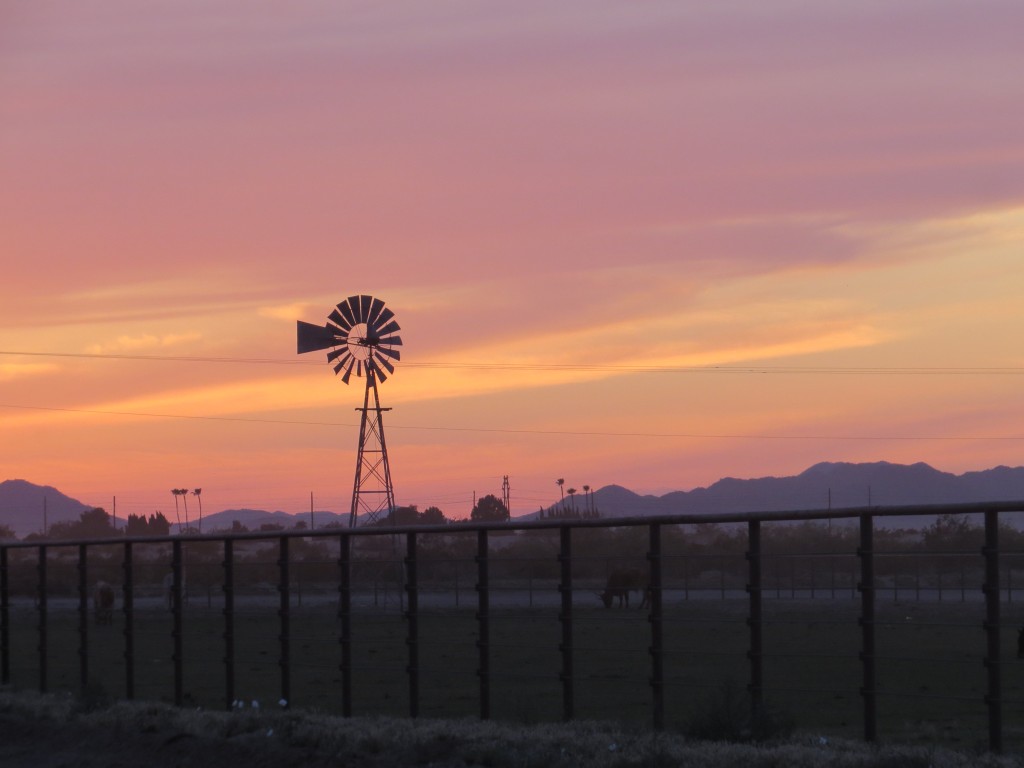 There was still a lot more owl action to be had on this trip, so check back to see what else we dug up!

One thought on “Burrowing Owl Bonanza”