Early this morning, I do what many of us do when our phone alarm wakes us – I check email and text messages. This morning I woke up to a text message from school: report to work 15 minutes early for a staff meeting – make every effort possible to be there at that time.  That could only mean one thing. Tragedy.  I scrambled to get myself and Marin out the door.  In the mean time I traded texts with colleagues and quickly found out what I had expected – one of our seniors lost his life as the result of an avalanche while snowmobiling in Montana.  I was stunned and confused.  It didn’t make sense to me.  Just the day before I visited at length with a young man who had returned early from that trip because he and several others were rattled by a close-call with a different avalanche.  It wasn’t until later that I learned a few of them remained in Montana  to continue snowmobiling after the others left.

Even though I’ve been through this in my career before, there are no words to describe what a sickening feeling it is.  Death is always hard to take, but it is even worse when it happens to someone so young.  It just isn’t the way it’s supposed to be. In a small school like ours the devastation ripples through the entire school community.  Somehow as staff and students we would have to muddle our way through the confusion and sadness of what was to be a very long school day.  There is no protocol for such an event.  The day started with our scripted announcement in class.  To my shock, most students had no idea.  I wrongly assumed in this day of social media that they knew what I knew. Students wept, they sobbed, they huddled, they moved from room to room. The collective grief was palpable in the hallways.  They didn’t know what to do and neither did we.  Older students were affected more than younger students, so as I went through my day I had to play to both sides – allowing the older ones to do whatever they needed and having the younger students do learning activities that weren’t too taxing yet kept their minds and bodies busy by doing something productive. Somehow we made it to the end of the day.

Though I’ve been around student deaths before, this was the first time something like this has happened since I became a dad.  It takes on a whole new weight.  I can’t imagine the parents’ pain.  That spark in their life was snuffed out so unexpectedly.  Simple things like tousling a kid’s hair or hearing him laugh are gone. I get to go home and do those things.  It’s just unfair.

Evan and I did have plans to go look for another Eastern Screech Owl this evening at one of my student’s houses.  I figured it wouldn’t be wise for a teacher to go after such a selfish pursuit at student’s property on this day, so I canceled.  But today the owls found me and the owling would be unavoidable.  When I finally walked out those school doors today, I was savoring the fresh air and mental renewal it triggered when a text came in from Randy.  His Great Horned Owl was in his yard.  Randy knew I’ve been wanting to photograph one.  It was just the break I needed after this day.  The grief counselors told us we needed to find something fun, something exciting to do in the next couple days.  This was it for me.  I never feel more fully alive than when it’s go time for a good bird.

I picked up Marin from daycare and gave her a big hug right away.  Then we got home and got her ready for dance class while we waited for Melissa to come home and bring her to class.  While we waited, Marin wanted to play a new board game she got for her birthday.  After today, I couldn’t just brush her off.  Even though she and I both had to be somewhere shortly, we played the game for a bit.  She absolutely loves interactive games and puzzles.  While we played, I got a phone call from Jeremy, a fellow teacher – his Barred Owl showed up in his yard this evening back in Grove City!  Wow! With daylight savings time last weekend, we now had the daylight to go after both owls!  I spoke with Melissa while she was en route home and filled her in with what I was planning.  She said that was good news because Evan was disappointed about not going after the screech owl.  This surprised me a little because Evan has become somewhat apathetic towards birds he’s seen before.

Melissa came home, and Evan and I were off to Randy’s.  It took forever to find his Great Horned Owl.  He finally relocated it for us, but it was obscured by branches and quite far off. As we searched, it was fun to watch Evan have fun by playing with Randy’s pet bird and laughing at Randy’s teasings.  They were moments to cherish. Despite Randy’s best efforts to lure the owl close to the window for some pictures, it wasn’t budging.  Finally I went outside to get some photos, and it flushed to a different perch.  The perch was far away, but it wasn’t as obscured as before.  Nevertheless, I was able to get what I wanted. 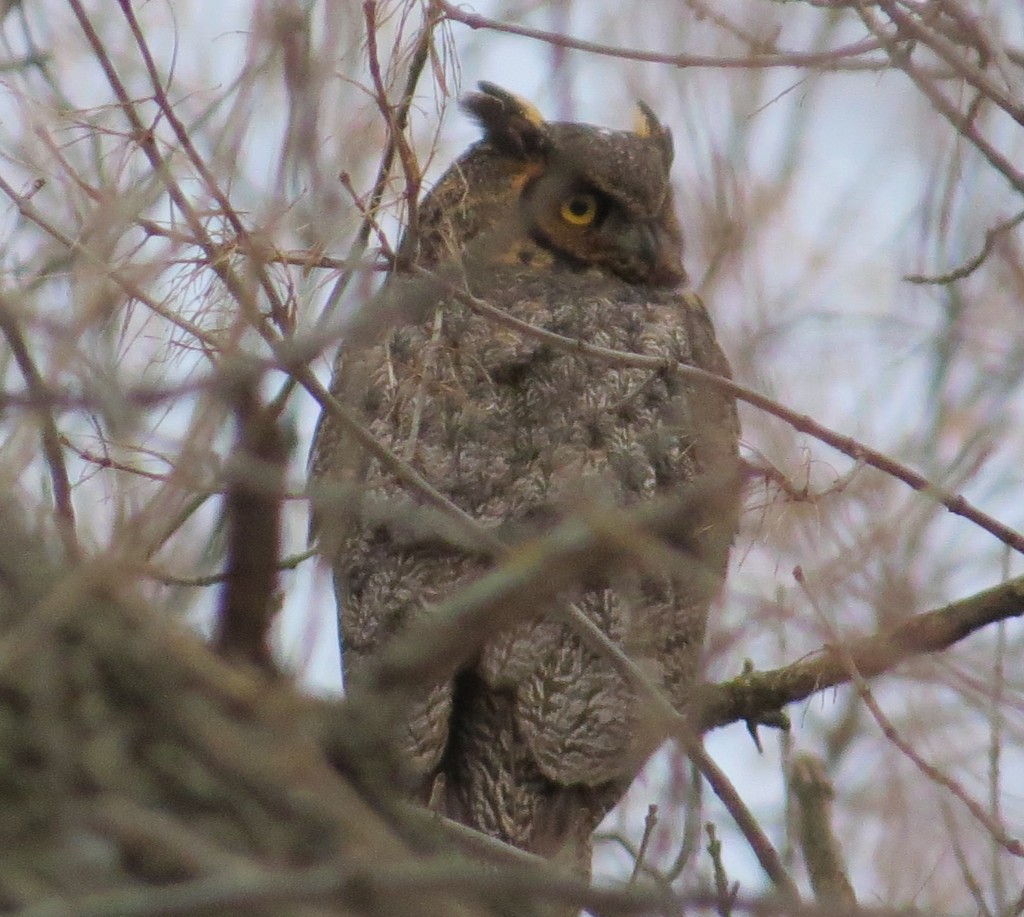 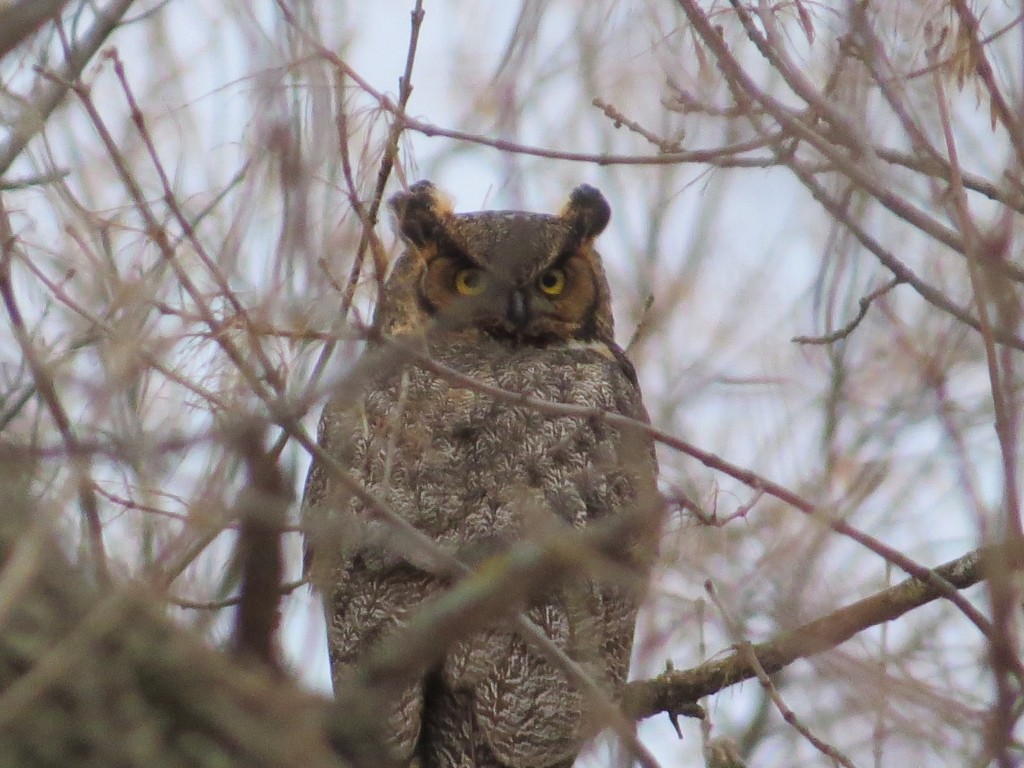 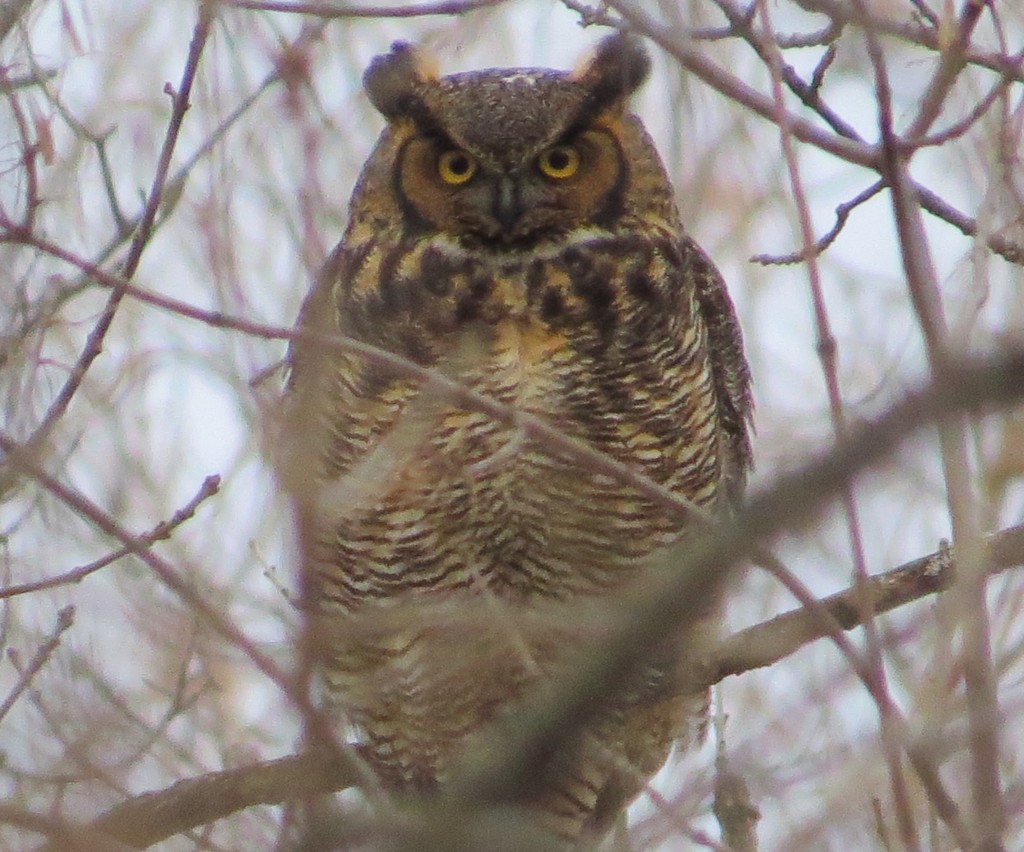 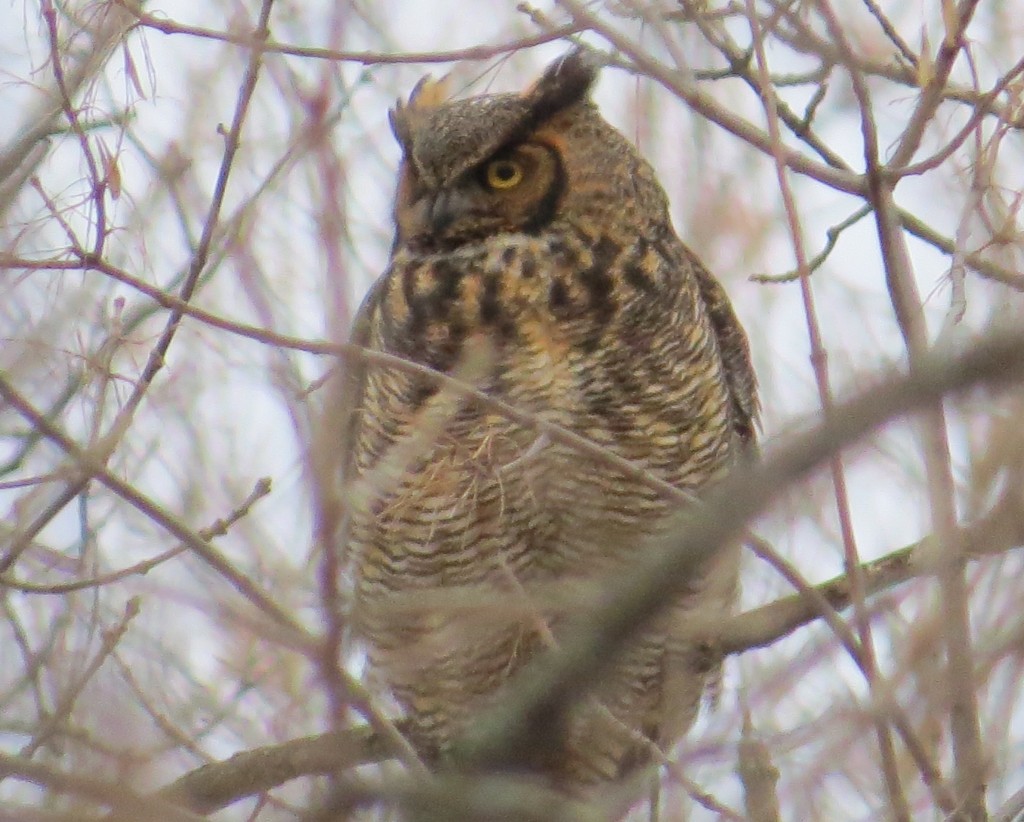 This was a real treat.  They are common owls, but I rarely have seen them in the daytime.  They are absolutely fascinating to look at.  And this one was so different than the nearly all-white one I had seen a couple months ago.

While at Randy’s I was in communication with Jeremy who lived 20 miles away.  He assured me the Barred Owl was still there.  I invited Steve along because he still needed a Barred Owl for the year. We got to Jeremy’s house, and I found the Barred Owl immediately in his tree when I caught its silhouette against the sky.  Looking at it straight on made it much harder to find – check out how well it blends in. 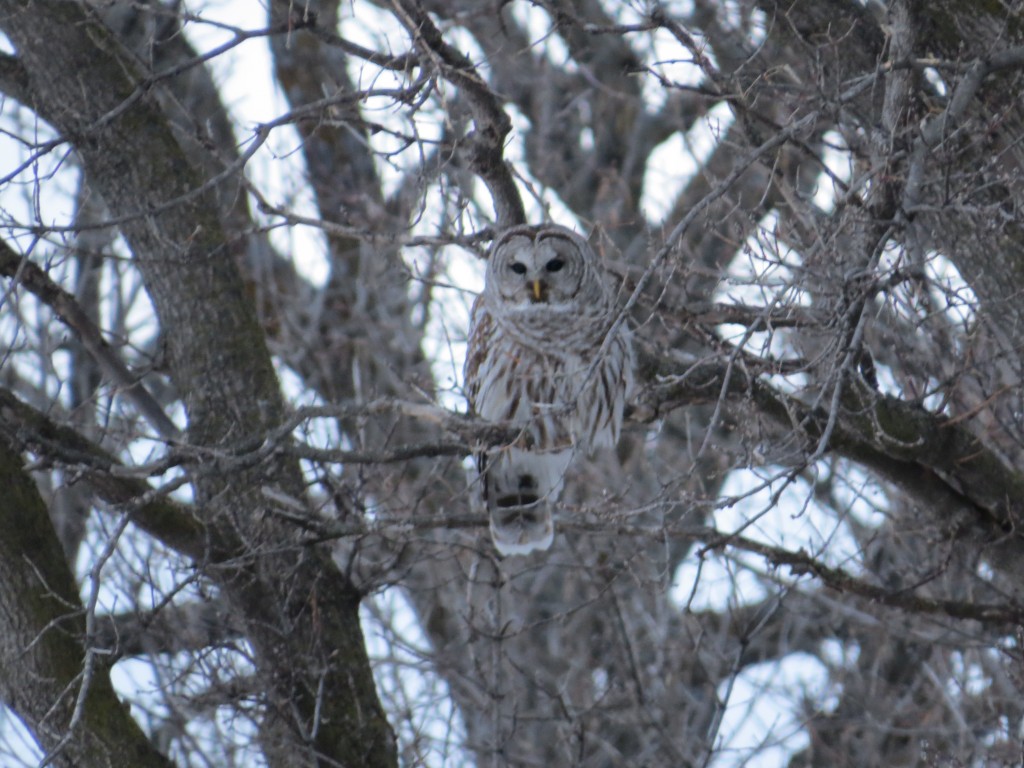 Barred Owls are fantastic birds with a real unique look.  I love the gentle expression of their face with the soft, black eyes.  Most owls have the yellow eyes that seem to pierce your soul. 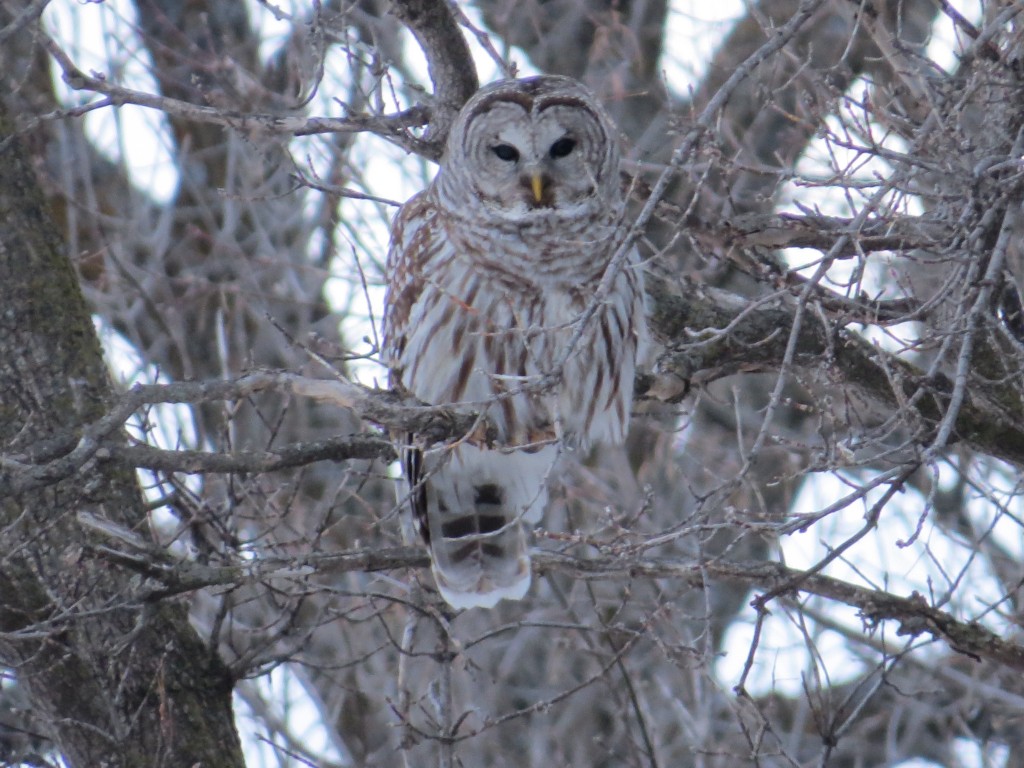 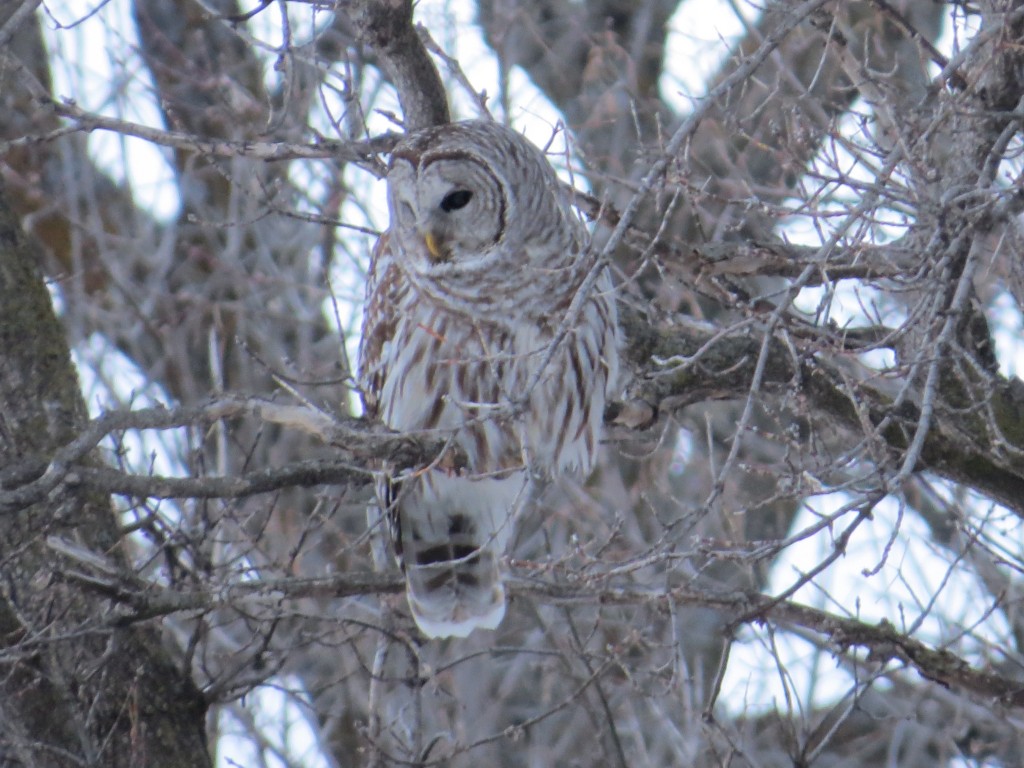 An owl always puts a bright spot on a normal day.  Seeing two species with my kid on such a gloomy day was just what I needed.  I don’t know how long Evan will enjoy looking at birds with me.  It will probably ebb and flow.  I’m okay with that.  He got me into this hobby, so who knows what else I’ll pursue because of him or Marin.  What I do know is that I intend to spend as much time as possible with both of them doing things that make them tick.