I have a great wife. Yesterday I received a message in the early afternoon from a fellow birder in Otsego that his Eastern Screech Owl was in his Wood Duck house for the day. I checked in with Steve to find out if he wanted to make the two-hour trip.  When Steve said he wasn’t able to go, I gave up on making the long trek.  But then, without me asking, Melissa said she would be up for a drive and a little adventure. Yes!

Let me give you a little background on this species and this particular owl itself. Obviously because I was willing to travel that far, it was a life bird.  Eastern Screech Owls are fairly common, but because they are strictly nocturnal and small (8 in), they are rarely seen.  Occasionally people see them in the winter when the owls poke their heads out of Wood Duck houses or tree cavities. To put an emphasis on how seldom they are found, the bird we were going to see is the only recorded sighting in Minnesota on eBird this winter.  This particular owl had been seen off and on for the past couple months.  Because it usually pokes its head out just before dark and because it’s not in the box every day, a trip up to Otsego on any other day would be a gamble and a potentially a waste of a trip.  However, when the owl is in the box for the day, it stays.  The property owner said that if, on the rare occasion, it showed itself early in the day, he would let me know so I’d have time to react and get up there. Yesterday was just such a day.

Complicating the decision to travel yesterday was that a student at my school had showed me pictures of an Eastern Screech Owl that had been occupying his Wood Duck house in recent days.  So I’ve been waiting for a call from him too. But like they say, “A bird in the hand…”  Plus, the Otsego screech owl was a gray phase.  The one at my student’s house is a red phase.  I want to see both.

So it was go time.  Though Melissa had changed into her hangout clothes for the afternoon and the kids were finishing a playdate with the neighbor girl, we hustled to get the car loaded for the little trip.  After a busy musical season followed by two kids’ birthdays, Melissa was ready for the kind of nap that only a long car ride can give. In fact, she decided she wasn’t changing out of her flannel pajama shirt that had birds all over it – something I tease her about by calling it her bird smock.  Because it is the center of some ribbing she decided that though she was going on this chase, she wouldn’t change out of it just to be playfully spiteful.  I told her it didn’t bother me, but it was definitely making the blog.  Notice, though, that there are no pictures.  I’m not that dumb.  After all, I’ve got a girl who volunteers to go on bird trips.  How great is that? Plus I value my life.

The trip up was uneventful.  Notable bird sightings included 9 Ring-necked Pheasants (7 hens – a promising sign for the following year), 3 American Robins (Yes – spring!), a Bald Eagle, and a pair of Trumpeter Swans.  We found the house without trouble and were invited in to his house to view the owl since it can only be observed out his backyard patio door.  Both kids wanted to see the owl, so they came in with me.   And it was sticking its head out right away – do you see it? 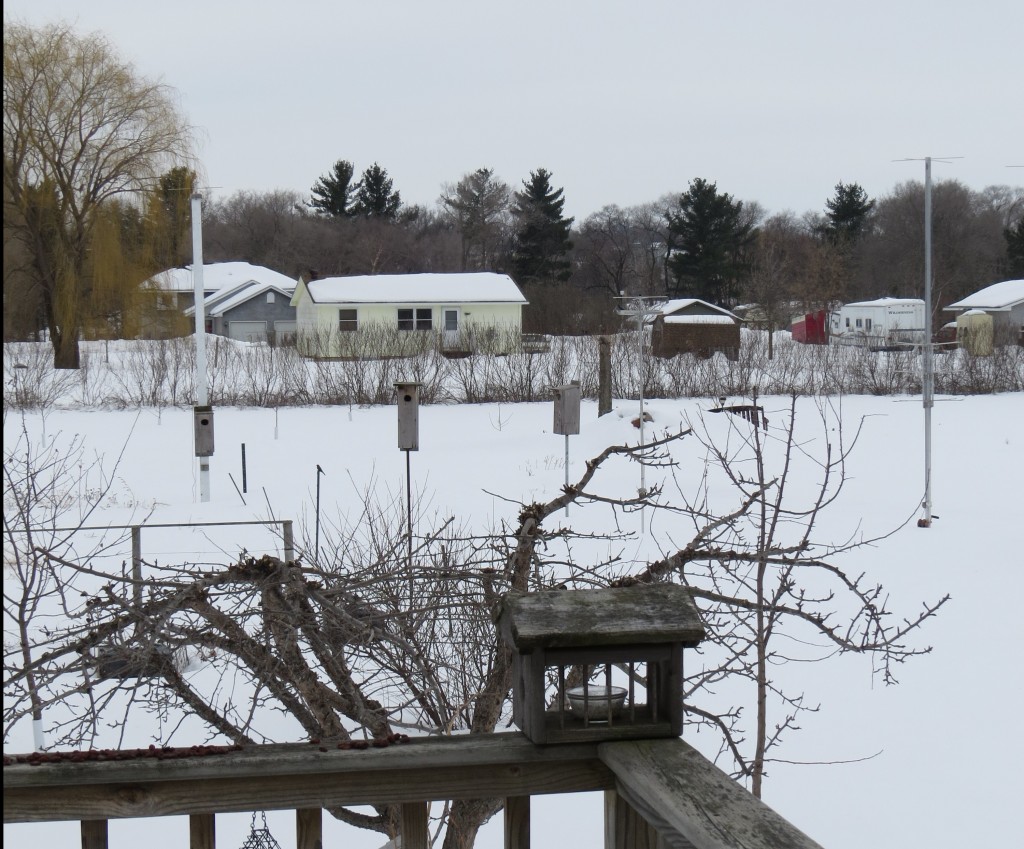 Do you see the Eastern Screech Owl?

Here’s a better shot.  While I photographed the owl, the kids had more fun looking at this birder’s pet fish and caged birds.It was fun to finally see this owl, even if it didn’t do anything but sleep the whole time. 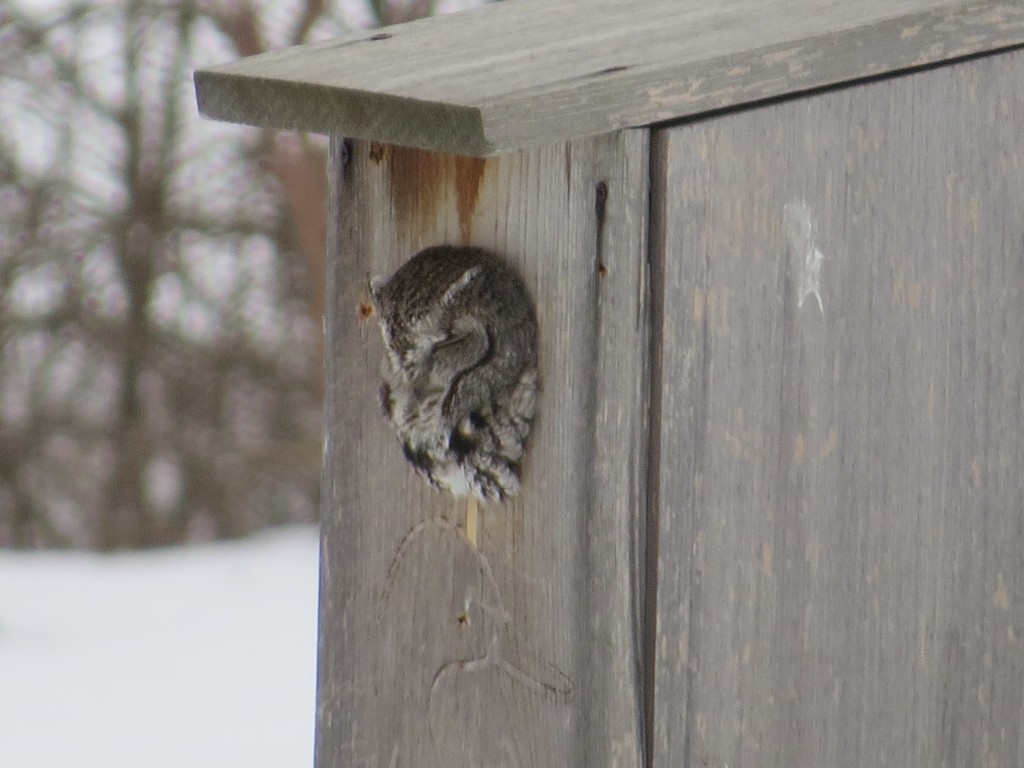 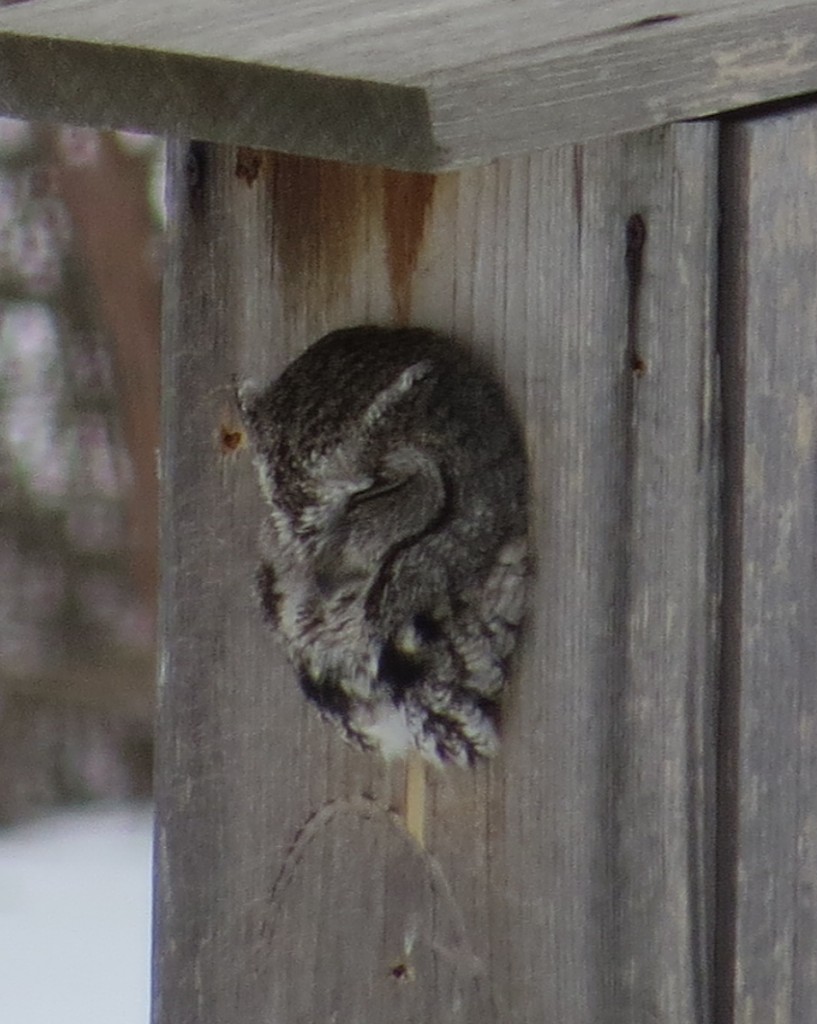 You are seeing most all of the Eastern Screech Owl as its feet are on the lip of the hole.

Since the owl wasn’t doing much and I had gotten the best pictures I could muster, it was time to leave this generous birder who shared his home and owl with us.  It was fun to chat birds a bit and match a name with a face.  The friendliness of many fellow birders never ceases to amaze me.

Being in Otsego, we were just a 10 minute drive from the state’s most famous Snowy Owl, named Ramsey for the town it was discovered in.  This owl has had throngs of people visit it and walk right underneath it while it perches on poles or rooftops.  It has been on the nightly news and is even one of about a dozen Snowy Owls across the country that has been captured and outfitted with a GPS tracker to study the movements of these owls during this historic invasion.  This huge research initiative, called Project Snowstorm, sprang up rapidly in response to this Snowy Owl phenomenon this winter.  You can follow these owls’ movements on interactive maps at http://www.projectsnowstorm.org.  There are actually two Snowy Owls at Ramsey’s location, and we ended up finding Cellie, named for being discovered on a nearby cell tower.  Do you see Cellie? 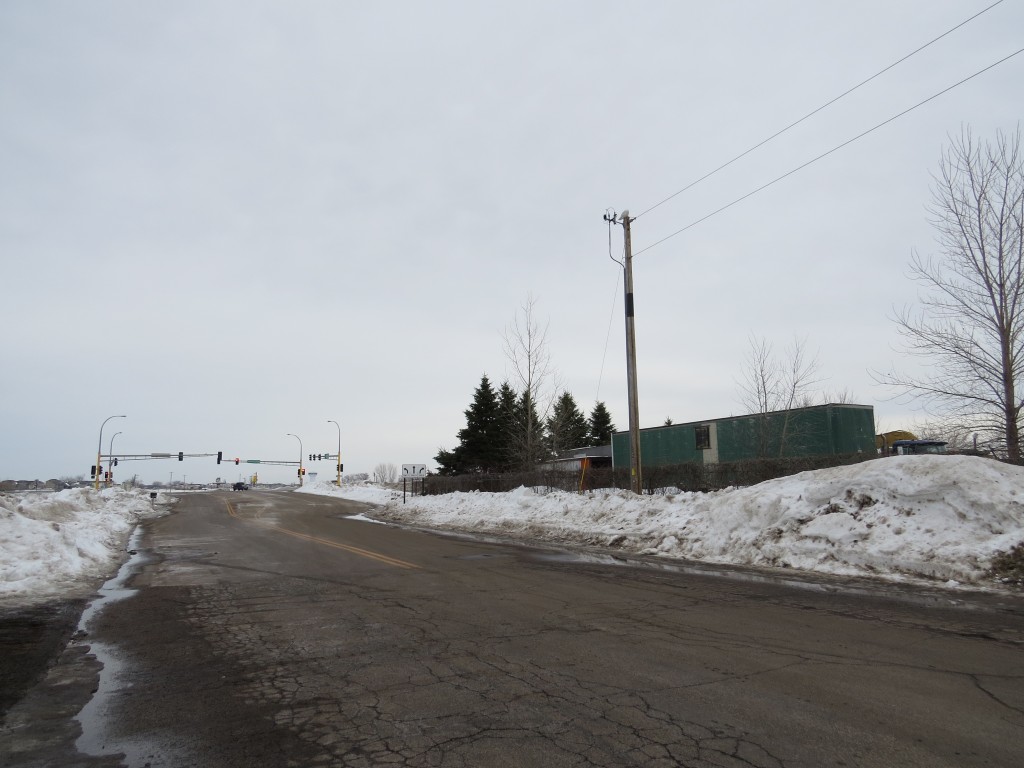 It was finally an opportunity to get some good Snowy Owl pictures.  Though I have now seen 9 Snowy Owls this season, I’m not completely satisfied with my pictures.  I still wish the sky would have been blue for these, but I’m pretty happy with them. 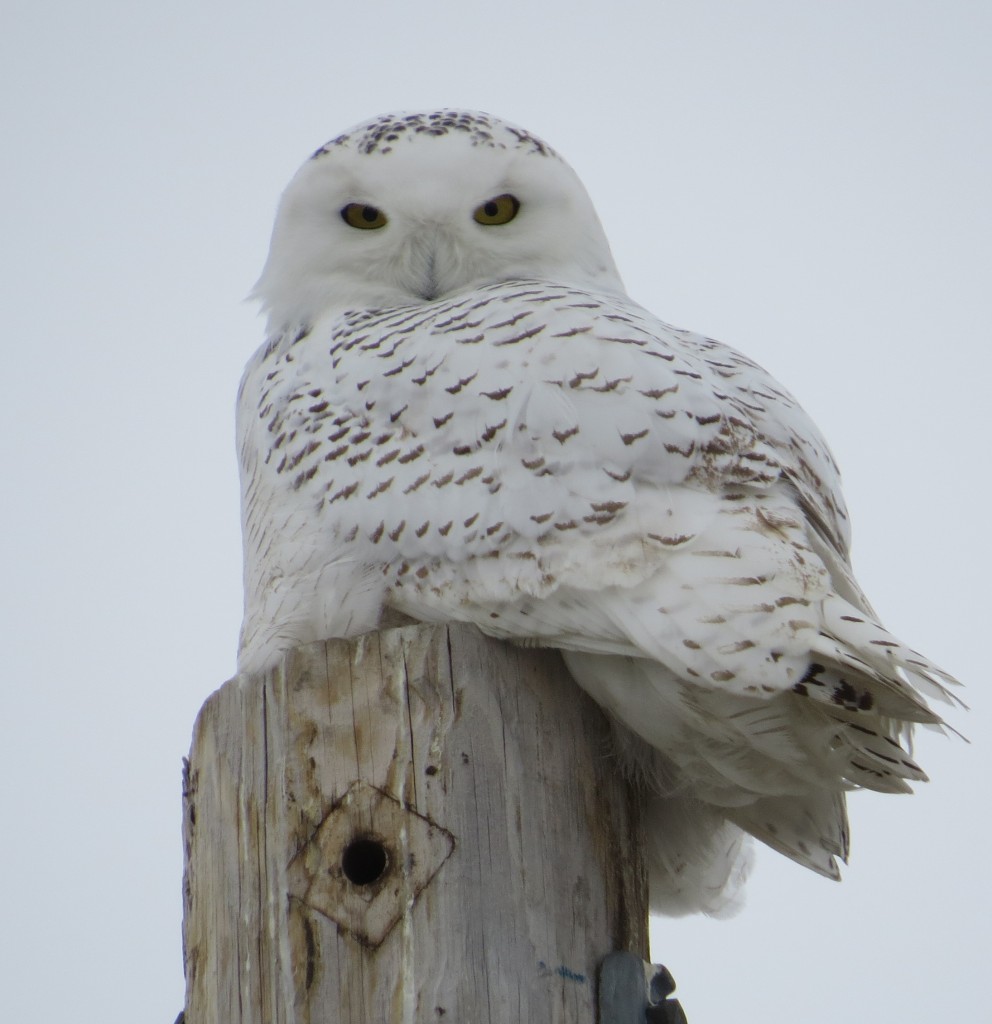 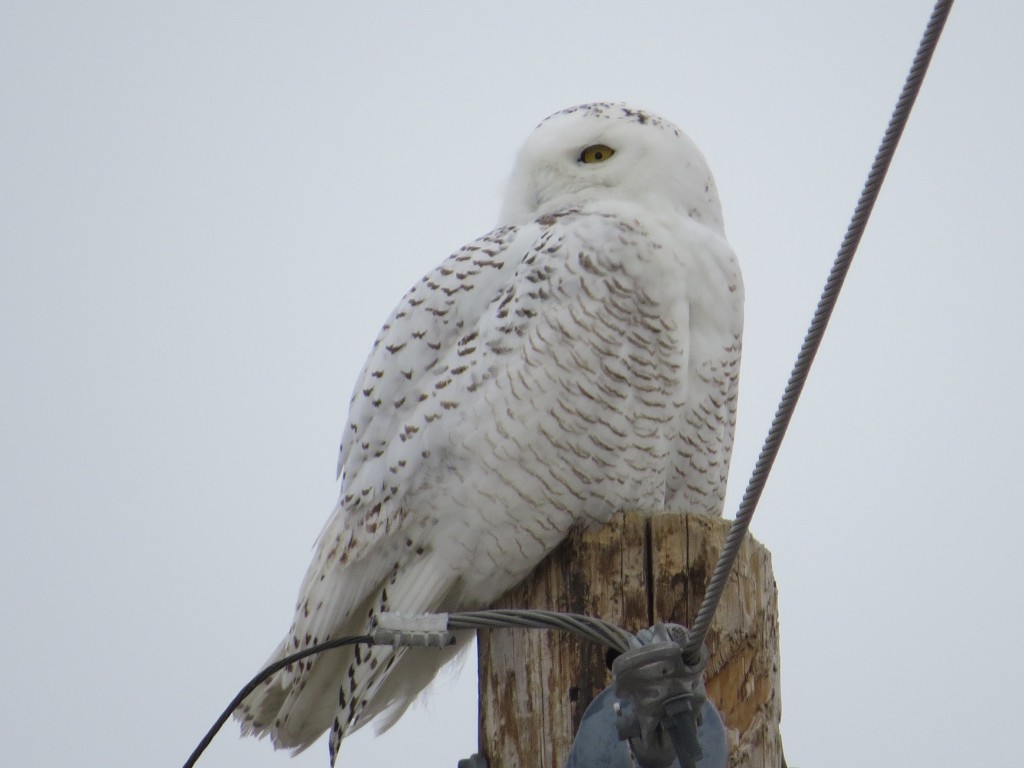 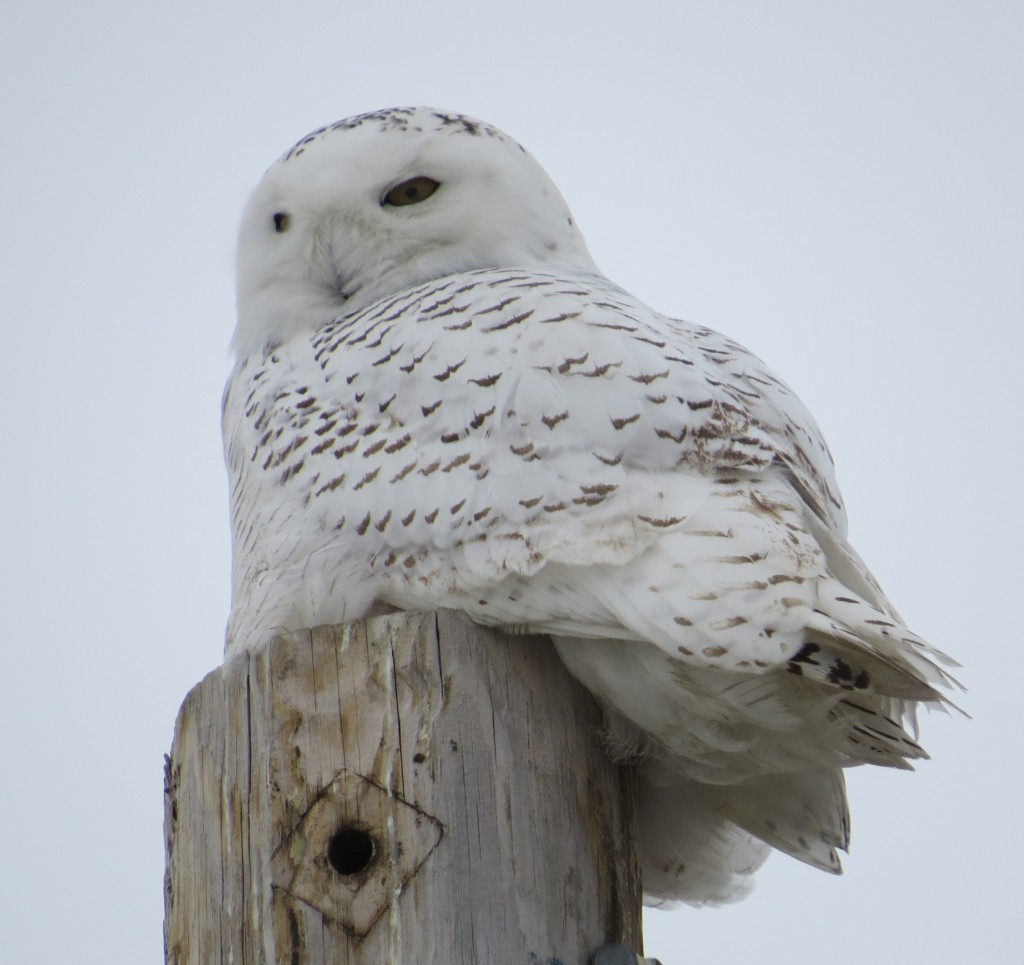 Finally it was time to go.  We grabbed a bite to eat at Denny’s and then got home to put kids to bed.  It was another fun, impromptu bird trip full of owls.  All of these owls have taken some of the sting out of this wretched winter and given our family some fun adventures.  To some extent I will mourn the end of this epic owl season.  Who knows, given the weather and the abundance of Snowies, there may still be more owls to find long into spring.