One thing that’s cool about migration is that huge flocks of small birds actually show up on radar.  Sites like www.woodcreeper.com show radar maps of recent migration activity.  Last night a birder posted to the Minnesota Birding Facebook page that this morning would be good for finding birds. I asked Evan if he wanted to go out in the morning.  He sometimes declines my offers to go out birding, but he said he wanted to go this morning.

I woke up early and decided to let him sleep in, even if it meant missing the prime time for seeing birds.  In fact, I was considering not going at all, but he woke up early on his own and said, “Dad, I thought we were going birding.” So off we went.

We got to Robbins Island Park right at peak time around 7:30.  We didn’t get too far from the car before we started seeing all kinds of bird activity.  Standing in one spot we saw a good number of warblers and vireos.  The most notable vireo was a Yellow-throated Vireo.  I wasn’t quick enough to get a picture of it, but I did manage to photograph a Blackburnian Warbler and a Wilson’s Warbler. 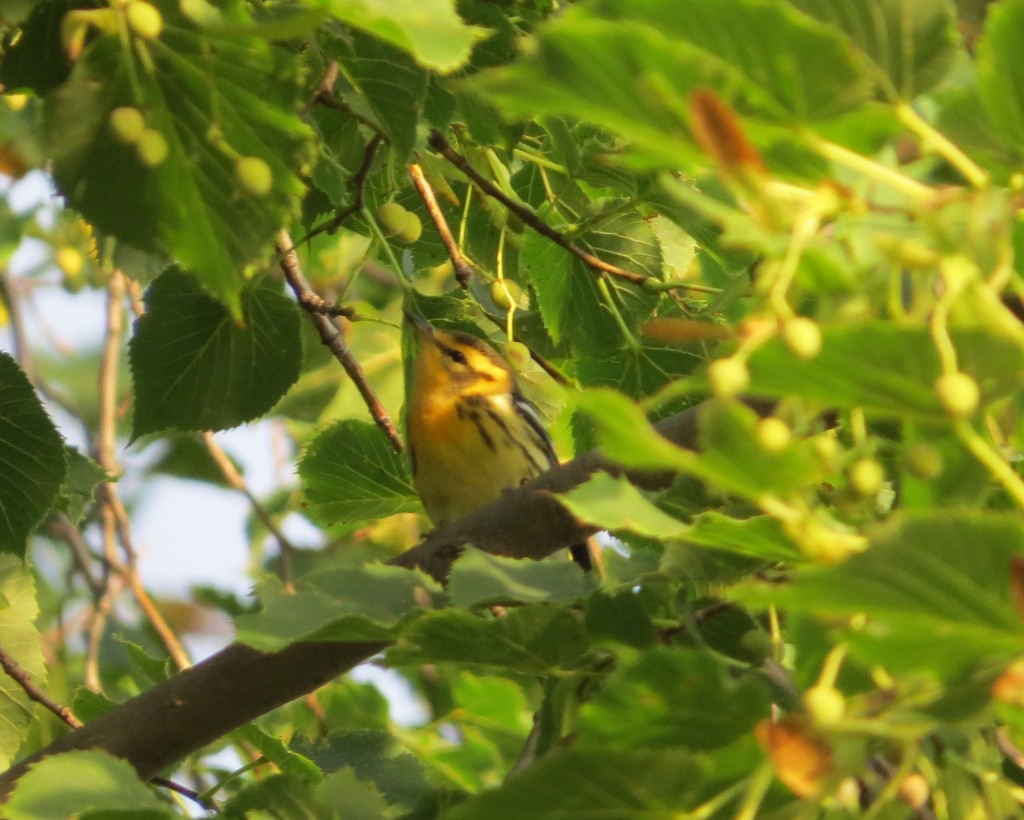 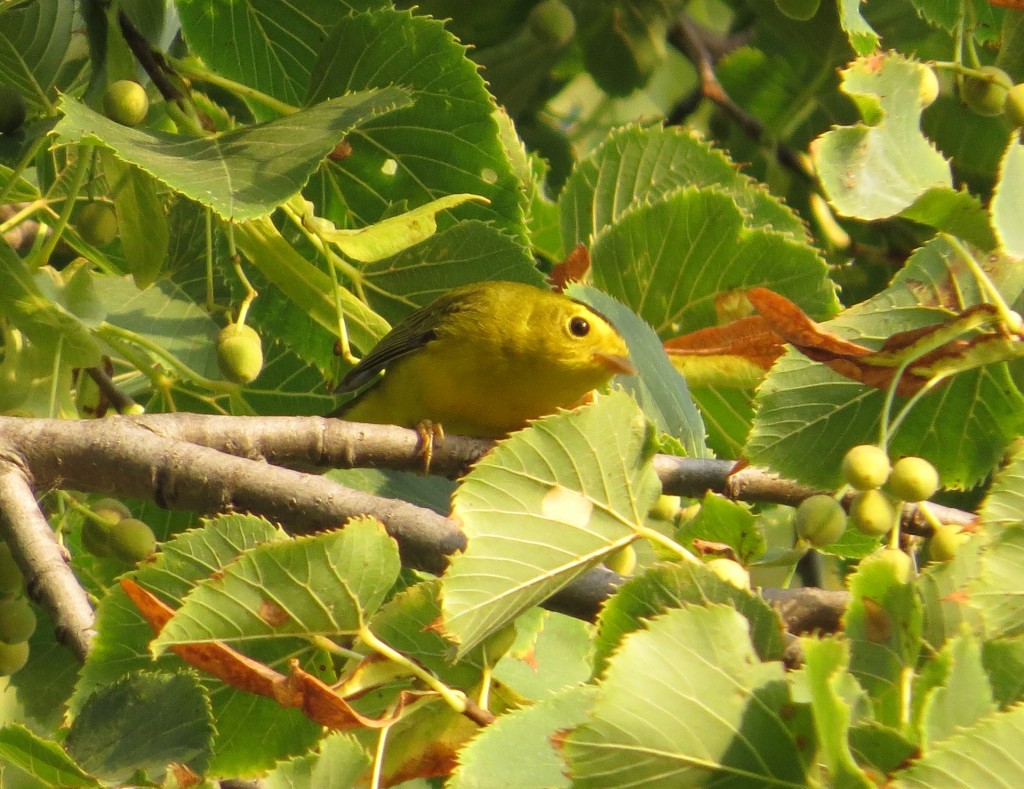 The warbler activity was intense for about 15 minutes, but then it was as if someone flipped a switch.  We could hardly find anything.  So we left our stationary birding spot to go walk through the park.

We were walking down a large, grassy hill and noticed about a dozen crows on the ground downhill from us.  Just then my sandal slipped on the dewey grass sending me to the ground.  I managed to keep my binoculars, camera, and body from injury, but now I was concentrating on not slipping again instead of watching those crows.  I did notice that they flushed, and then I heard Evan holler, “That was a hawk!” I then saw that the crows were indeed mobbing and chasing a hawk.  I’ve heard other birders describe how seeing this behavior had led them to finding hawks and owls, but we’d never witnessed it ourselves. The chase was on!

The hawk tried to take refuge in a tree as the crows kept pestering it.  I was able to get a glimpse and see that it was a Broad-winged Hawk! 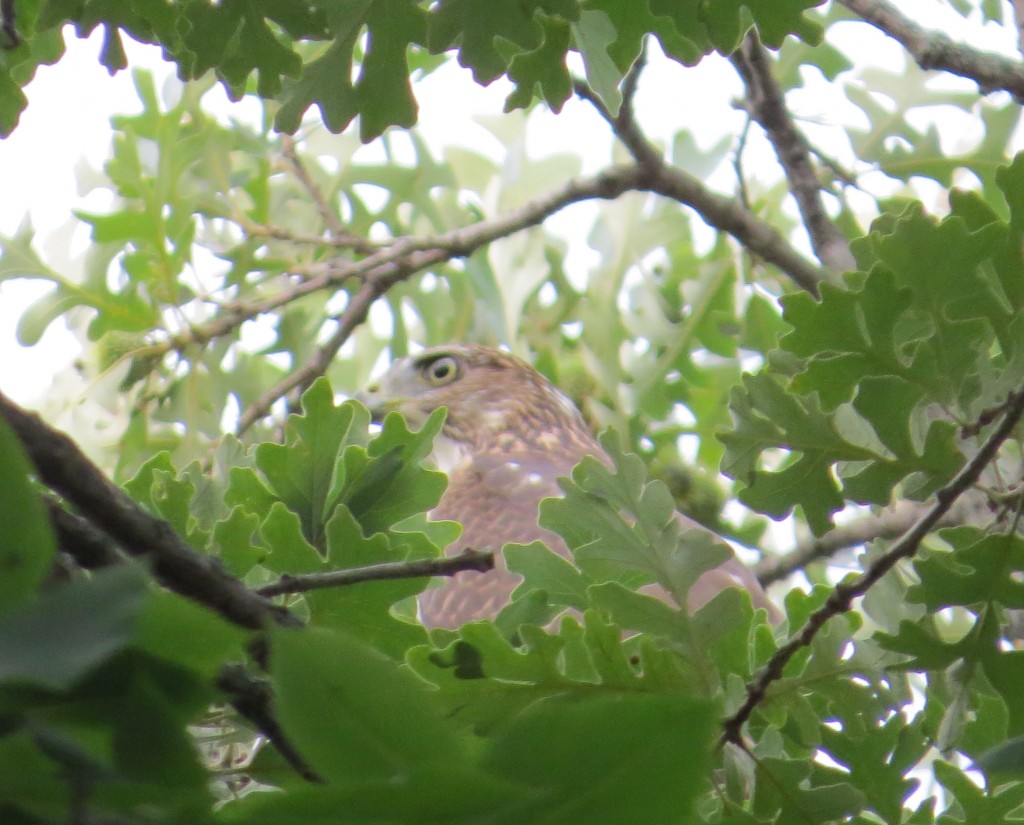 The crows kept after this hawk, chasing him out of this tree and through the park.  We weren’t far behind as we were now running along trying to get another glimpse of the action through the canopy of the trees. 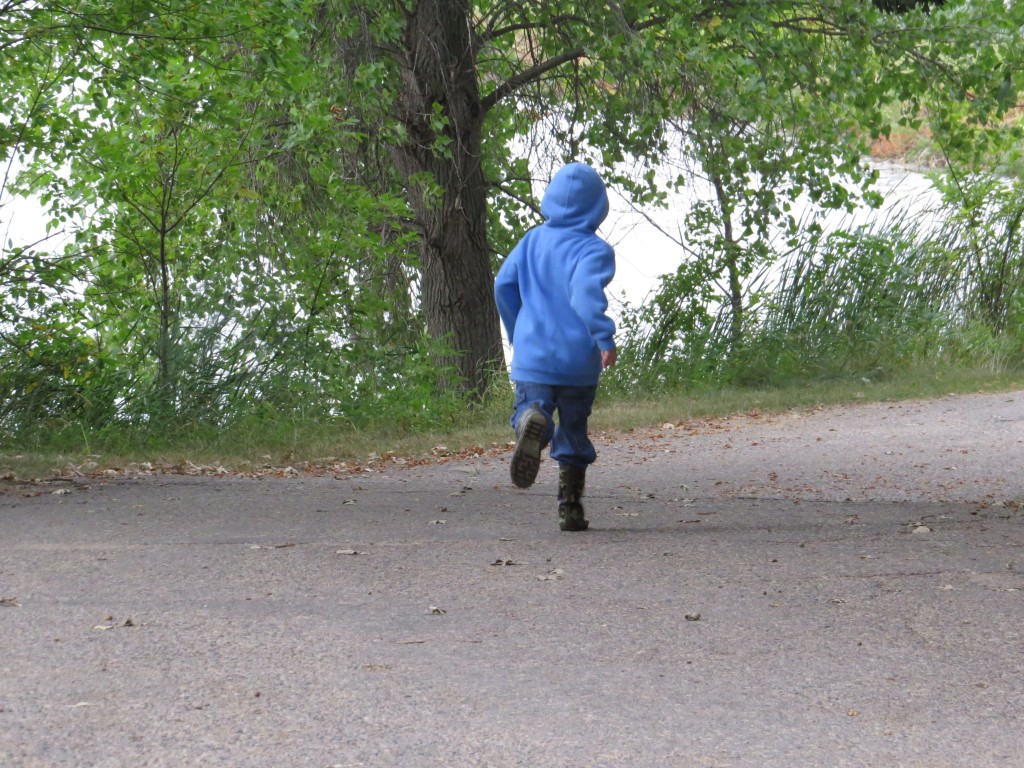 As we followed this circus, Evan claimed to have seen a second hawk being chased by the crows.  We eventually caught up to the flock of crows at the end of a long skinny peninsula on Foot Lake.  We watched from a distance and were able to see that a hawk was still with the crows.  Shortly afterward, the crows chased the hawk back toward us, and I was able to get this flight shot. 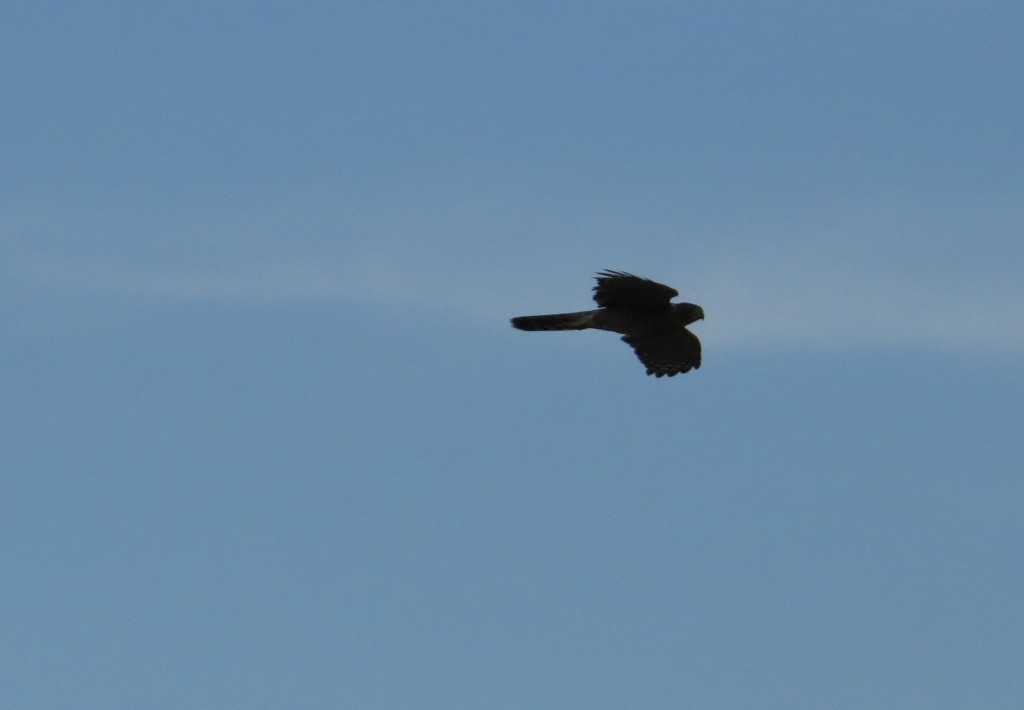 Though the light in the picture was bad, I saw that this hawk belonged to the Accipiter family – hawks with long tails.  The Broad-winged hawk is a Buteo – a hawk with a wide fan tail.  Evan was right – there were two hawks!  Now we were dealing with either a Sharp-shinned or Cooper’s Hawk.  We eventually lost track of this hawk without making a positive ID.

We made our way back to the other end of the park and caught up with the flock of crows again.  Once more they were dive-bombing a hawk!  Back to jogging we went. Finally we caught up to the hawk, but what was it? 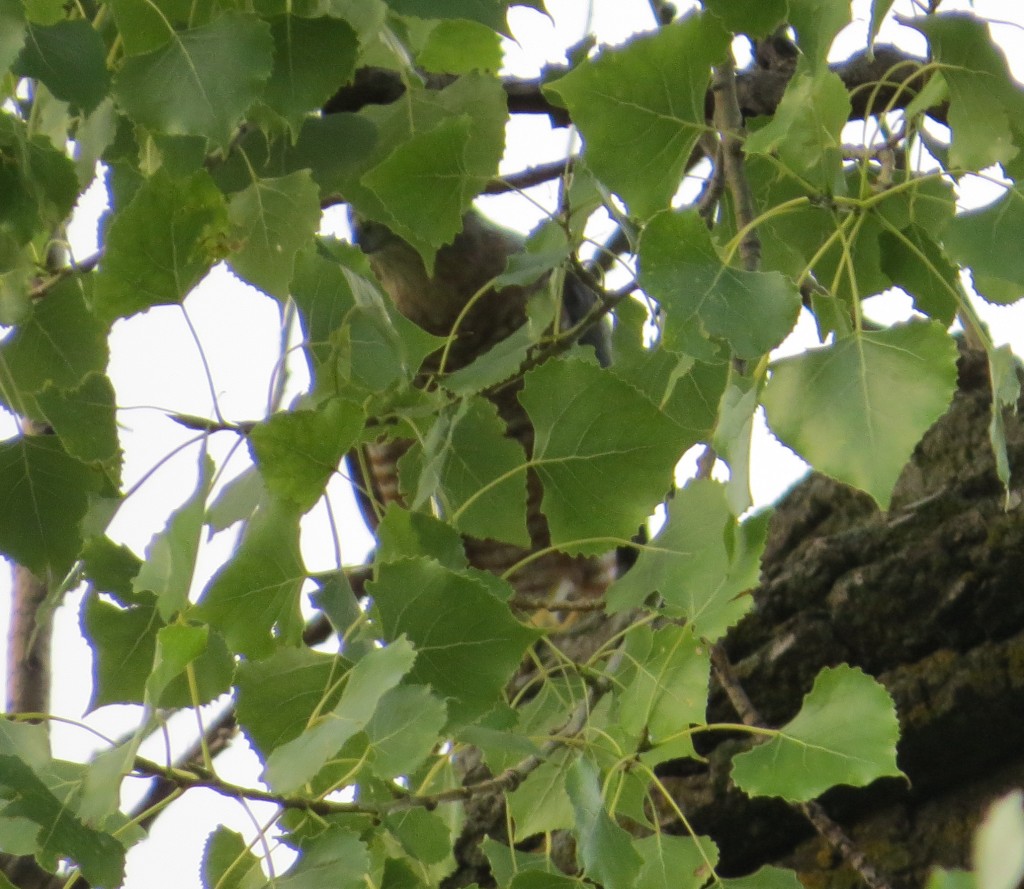 The crows helped me out by continuing to pester the bird until it was in a good view. And we saw that it was a Cooper’s Hawk. 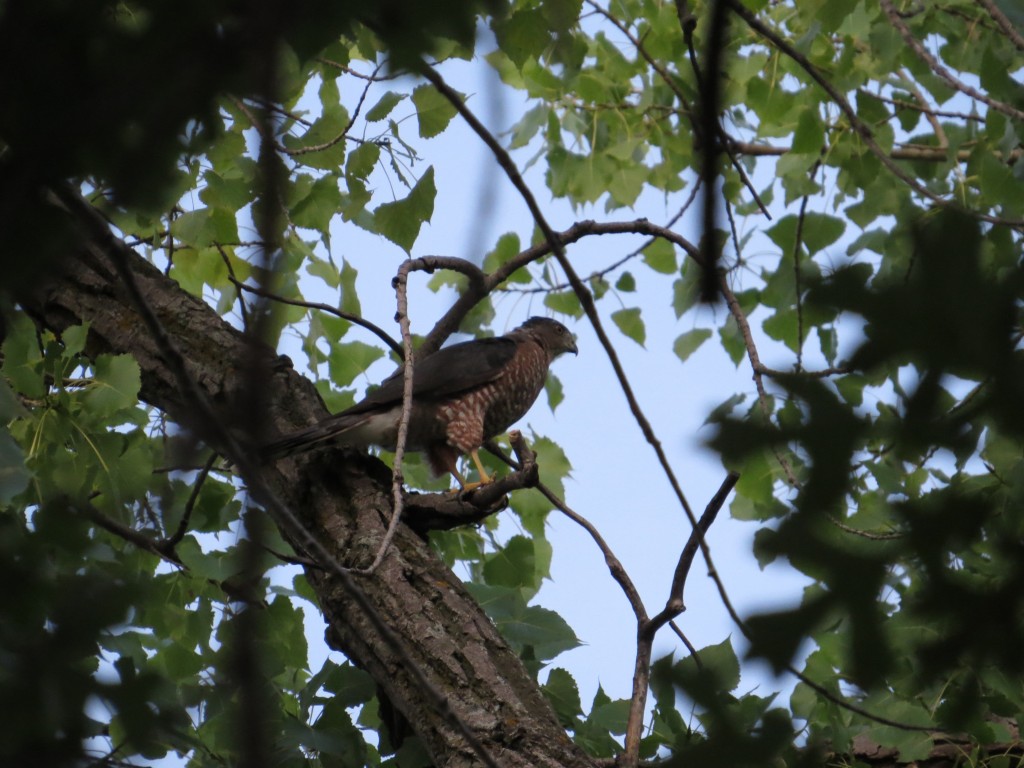 So a relaxed morning of looking at warblers turned into a hot pursuit of hawks.  It was exciting to see not one, but two different hawk species.  It was also fun for us to witness a mob of crows dive-bombing raptors and be a part of a thrilling chase.