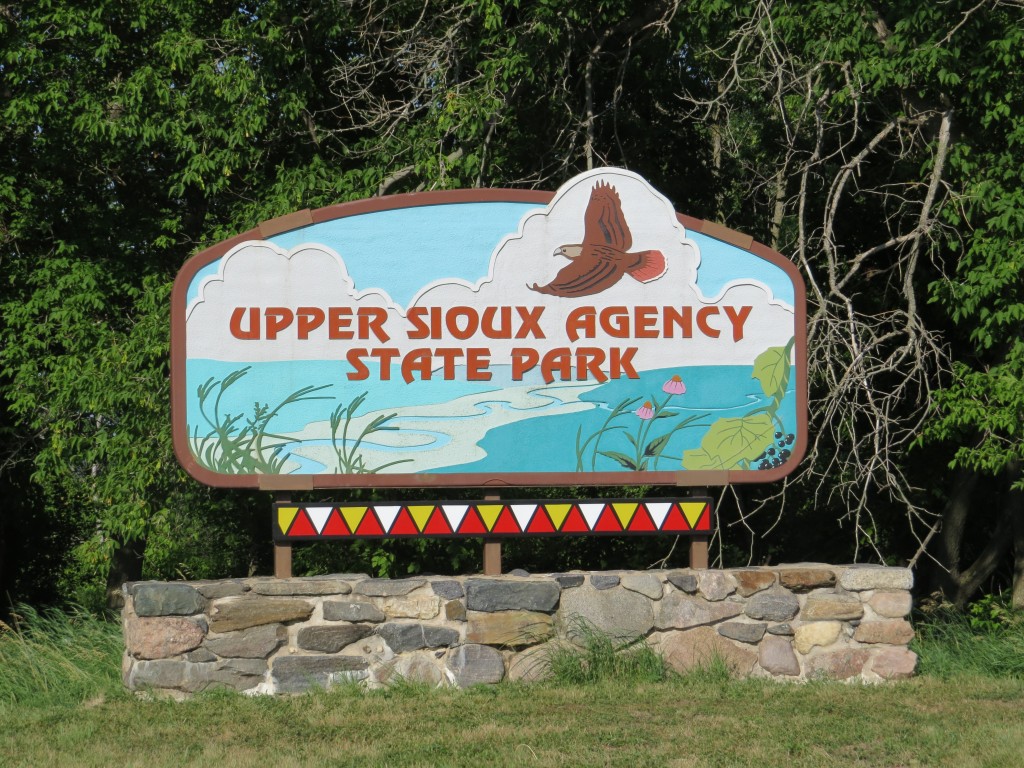 I really never had any great desire to go to Upper Sioux Agency State Park near Granite Falls.  I had researched the park a while back when we started camping since it is less than an hour from our house, but I did not think it was really a compelling place to visit. I thought it might be more appropriate to go to it when the kids start to study Minnesota history and learn about Minnesota’s first inhabitants and the Sioux Uprising of 1862.

This past week I was compelled to visit this park since Joel emailed me telling me that he had seen numerous Lark Sparrows all over the park. This may not seem like a big deal, but Minnesota is not even included on range maps for this bird.  Range maps aren’t always definitive, though. I knew that Lark Sparrows occasionally visit Minnesota as sightings are usually posted on MOU-net.  As further evidence that they were unique for Minnesota, Joel also told me he just had seen his second one for our county.  This is a good bird for our state. Besides that, the Lark Sparrow is a sharp-looking bird.  It was definitely on my short list of birds to see, and Upper Sioux Agency State Park was the place to do that. After Joel’s report, I even read in Kim Eckert’s book, A Birder’s Guide to Minnesota, that the area of the Minnesota River Valley near Upper Sioux Agency was the best place in the state to find the Lark Sparrow.

Here you can see on the park’s bird check-list (Each MN state park has one of these), that the classification for a Lark Sparrow in summer is O.  The classifications go like this: C=Common (Easy to find), U=Uncommon (You may have to look for it and know what you’re doing), O=Occasional (It may or may not be present in a given year), and R=Rare  (self-explanatory).  An “O” definitely means it’s a good bid. 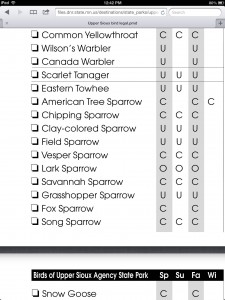 A good bird and lots of them all at a new state park meant one thing: Evan and I were going on another quick overnight in the tent.  I picked Evan up from daycare late in the afternoon, and we made the short drive down to the park.  It would have been even shorter had I not had to complete a Craigslist-type transaction for Melissa at Clara City. But we were still there in no time.  As we drove down the Minnesota River Valley on the way, I was reminded just how scenic this valley is. It’s definitely worth taking a drive in this part of the state.  Once at the state park, we first went to drive around the completely vacant campground to pick out a good site before registering.  Along the loop, we found our target!  That was fast. 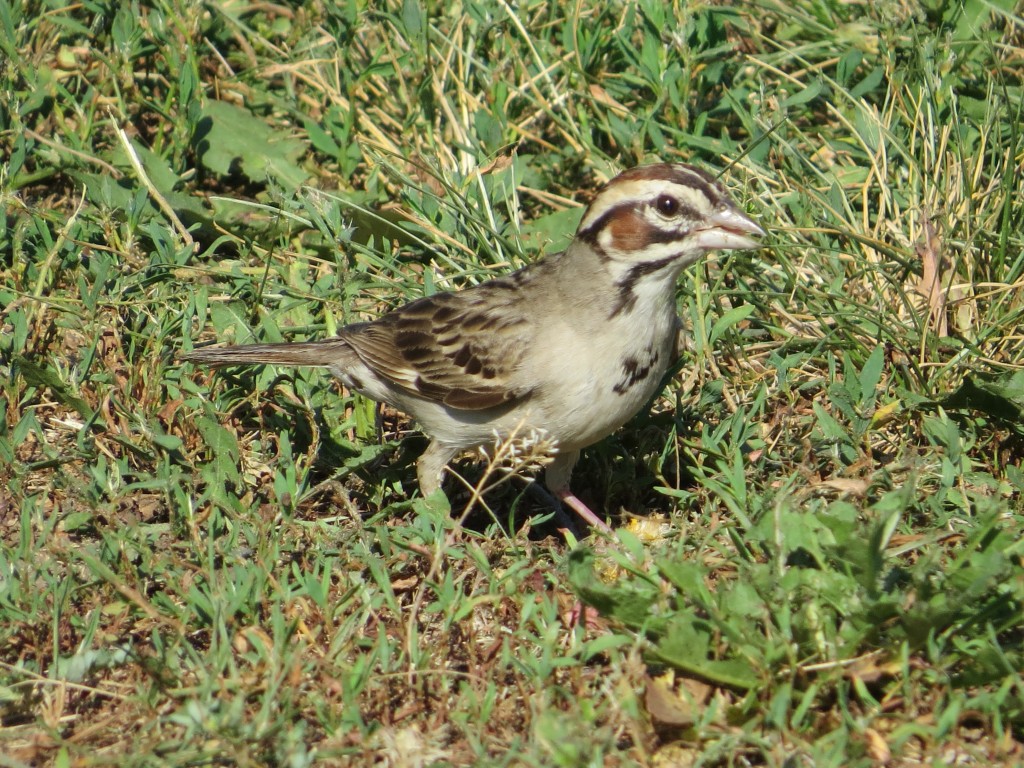 It was time to register.  We pulled into the park office parking lot and walked up to the office.  I walked, but Evan was running ahead of me because he wanted to get the park’s signature patch – a tradition we have when we stay at a new state park.  We pulled on the door, but it didn’t budge!  The place was locked up without a soul in sight! What was going on?  No campers or park staff were around anywhere.  It was weird.  I had to calm Evan down who was in tears because he couldn’t get a patch.

I realized that maybe this park office has limited hours since it is not a high-use park.  I discovered I was right when I self-registered for camping that night.  It turns out the office wouldn’t be open until the weekend.  I guess we’d have to have them send us a patch.

After making camp, we drove all around the various parts of the park which is split by MN Hwy. 67.  It was too buggy and hot to bird by hiking.  We found more Lark Sparrows at the horse rider’s campground. 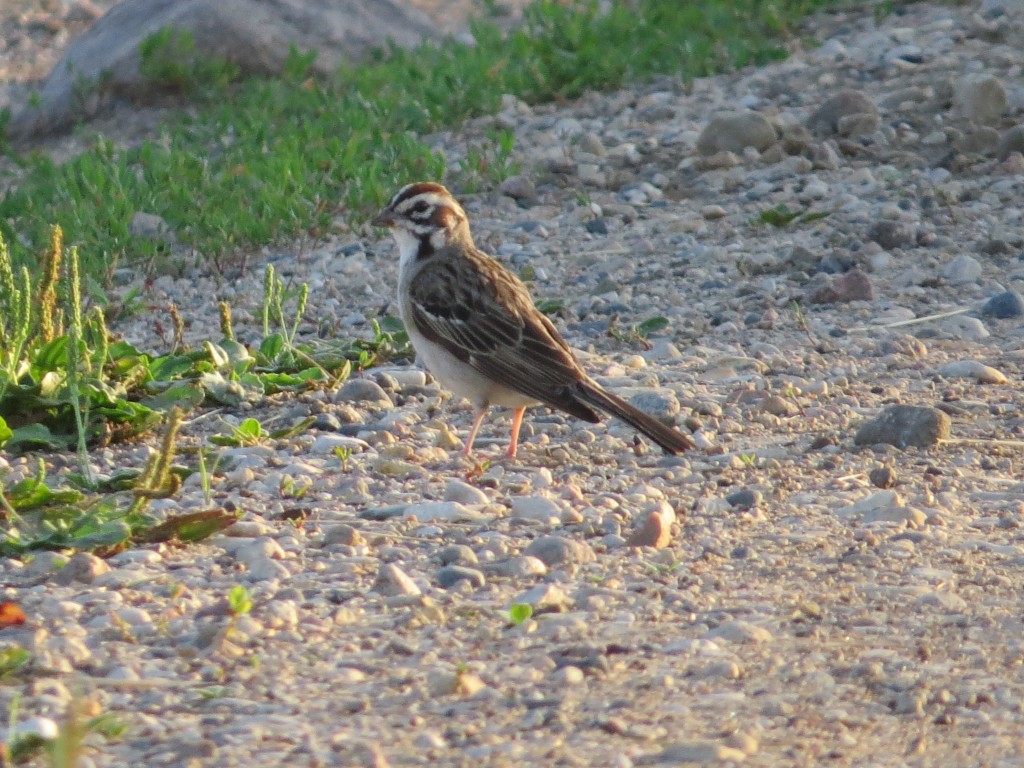 I also got a long-overdue picture of a Barn Swallow. 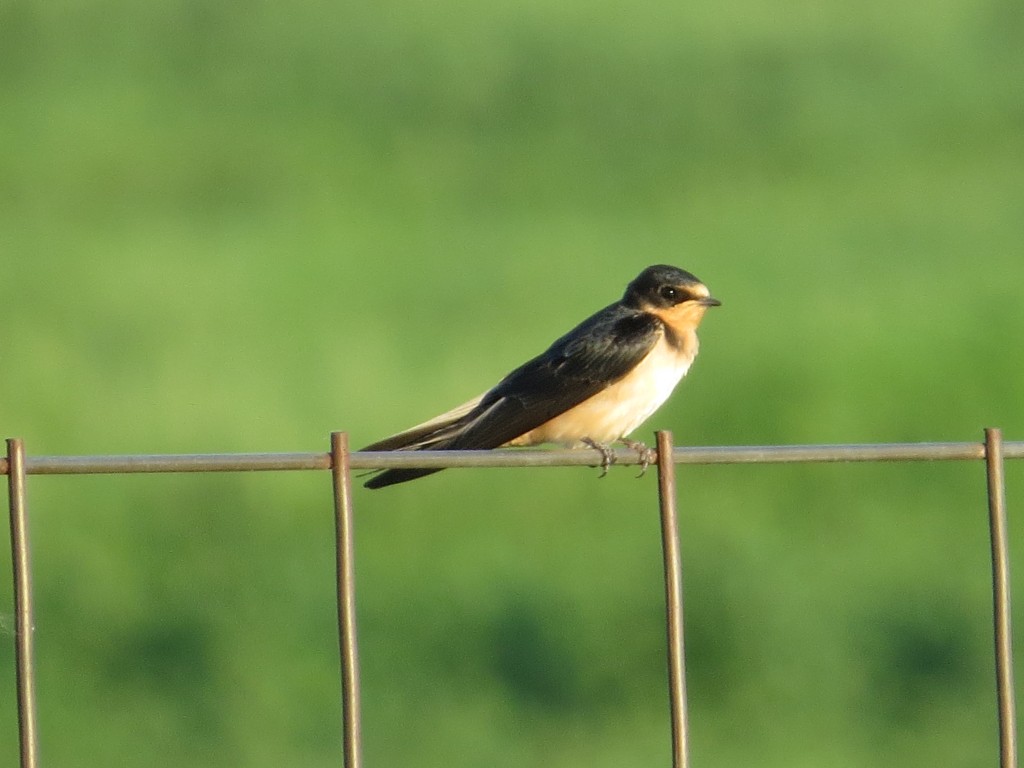 Evan was intrigued by this hay bale and wanted to see how big it was compared to him. This seemed to fascinate him more than the birds. 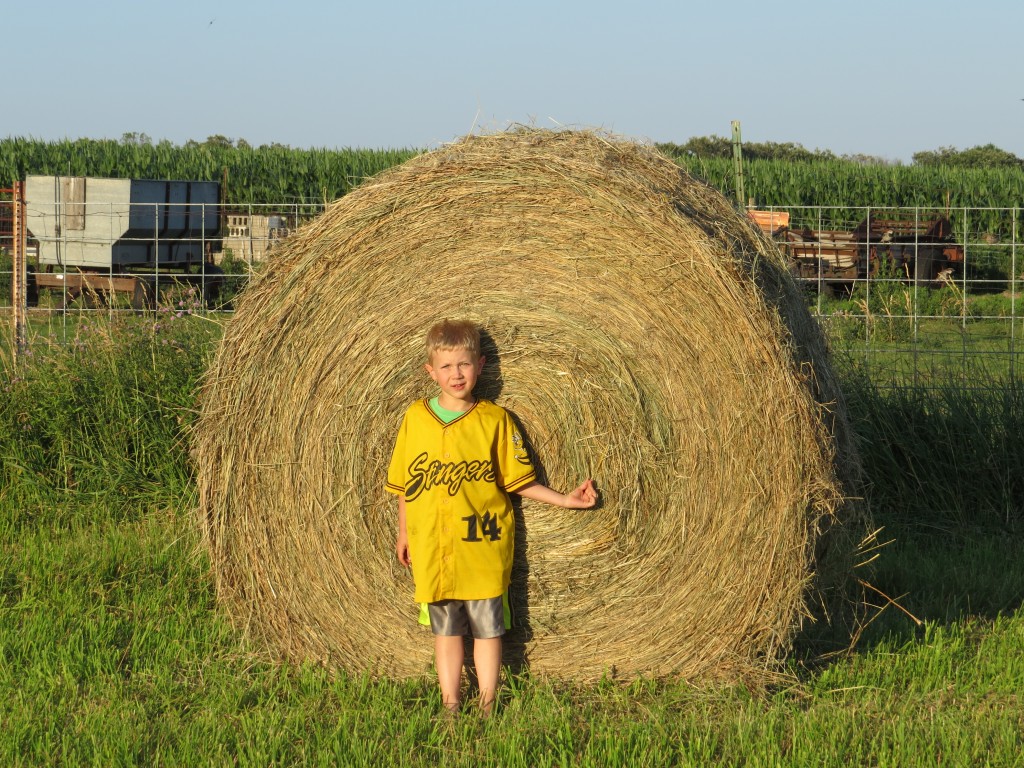 We got back to camp to make a fire and cook some hot dogs.  We didn’t last long outside with all the mosquitoes, so we headed into the tent to play Kings on the Corner and Go Fish and then read a book before bed.  With the target bird achieved, we were sleeping in the next morning.  As we laid in our tent, we enjoyed watching the fireflies and listening to the hoots of Great Horned Owls.

We didn’t wake up until well past 9:00 the next morning.  We got packed up, had a bite to eat, and pulled out.  I wanted to drive around some park roads again before we went home.  It’s a good thing I did.  I happened to meet a state park worker driving a truck.  I motioned for him to stop and asked him through our driver windows if we could buy a patch from the office.  He said he could do that.  Awesome.

With the target found and the patch in hand, we had a successful trip.  As we continued to drive around the park, we heard a bird song that we recognized from playing it on the iPod just that morning – the Field Sparrow.  This was another life bird for us.  Its classification is “uncommon” for this park in the summer, so it was a good find.  This bird belied its name – we found it at the very top of a 30 ft. tree. 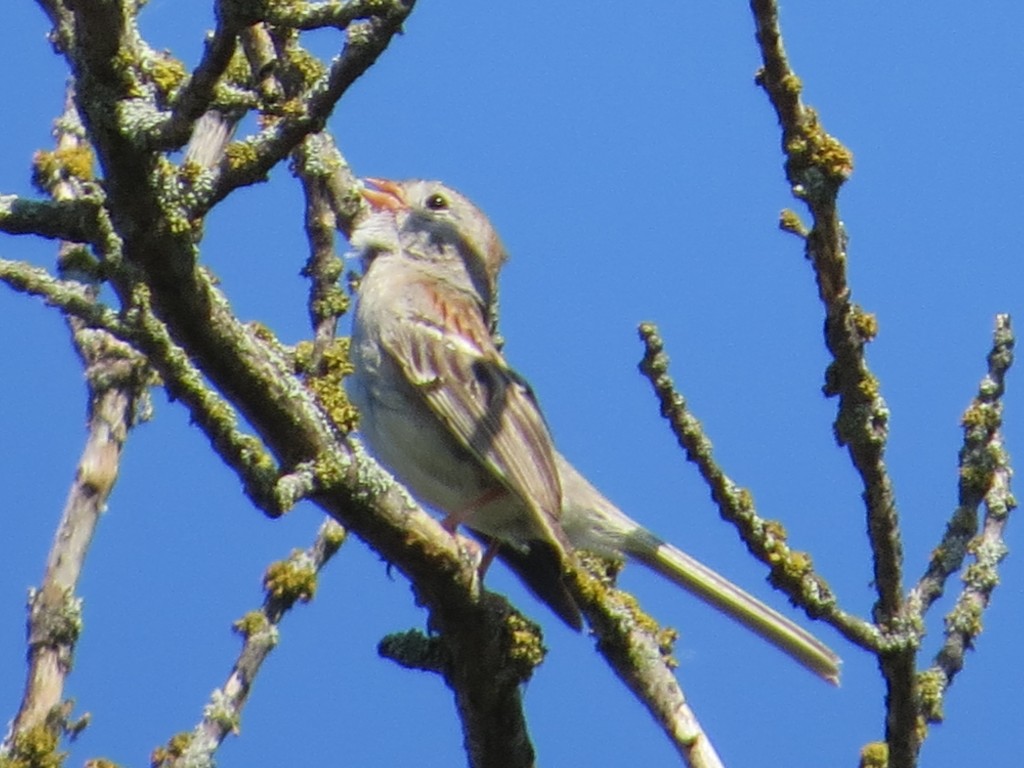 Without recognizing that bird song, we would have had trouble identifying it.  The Field Sparrow is pretty drab, but its pink bill is diagnostic.

It was another good trip.  We got the bird.  We got the patch. We added a bonus lifer. Plus we got to spend a fun night in the tent playing games.  It was a good trip.  By the way, Evan is now at 191 species, and I am at 200.  We are giving away a Kaufman Field Guide to the Birds of North America to whomever guesses the closest date on which Evan gets his #200.  See the previous blog post for details.