Click this link to read Up North – Part One: Temperance River State Park. 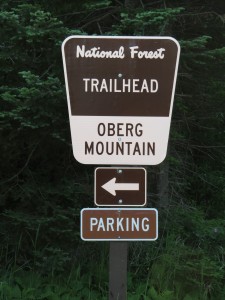 From being plugged into MOU-net and reading A Birder’s Guide to Minnesota by the renowned birder Kim Eckert, I had learned that Oberg Mountain was the place to go if you wanted to find a Black-throated Blue Warbler in Minnesota. They are scarce in our state and only inhabit the forests near the North Shore.  This was the bird the brought us to the North Shore.  It is one of those birds we just had to see.  It is stunning to say the least. Our other targets, the Black-throated Green Warbler and the Blue-headed Vireo, could have been found all throughout northeastern Minnesota.

Not knowing what hiking up Oberg Mountain 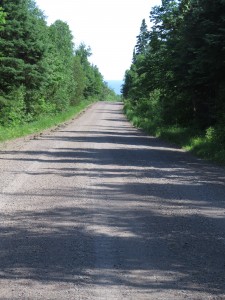 would entail, we decided not to explore it our first morning.  It could wait until we got settled, and it would be the main event for the next day.  We did camping things that first day and explored the shore with the kids where throwing rocks is the most exciting sport ever.  The whole time, though, that mountain was beckoning.  But, it had to wait.  We instead decided to try one of Eckert’s suggestions and drive a Forest Service road right near Temperance River State Park to listen and look for the Black-throated Blue Warbler.  Its sound is very similar to the Black -throated Green – it is a slower, buzzy “zoo-zoo-ZEE!”  So, we listened as we drove down this dusty road that cut through the canopy. No “zoo-zoo-ZEE!” could be heard, but we did hear a Northern Parula and tried to locate it visually.  This is another gorgeous, blue bird.  We only saw a Northern Parula once for just a moment during migration.  I really wanted to get a photo of one, but this bird wasn’t showing itself today either.

We got back to camp, and Melissa decided to go on a run while the kids and I poked around the campsite.  The idea hit me that maybe we should take a drive just to see where the mountain was and how much hiking was involved.  As soon as Melissa got back from her run, we were in the car headed to Oberg Mountain.  It turns out it was only about seven miles from our campground.  As we climbed in elevation going up the Forest Service road from Hwy. 61 to the trailhead, a Common Raven flew down the road in front of the car just twenty feet in front of us only a couple feet off the ground. It did this for over a mile! It never tried to take refuge in the trees to the side but instead acted as mystical guide, taking us to this magical mountain where cool birds lived.

The bird eventually did take cover in the trees, and we still found our way to the trail’s parking lot. The Oberg Mountain trail is a spur of the much longer, more well-known Superior Hiking Trail.  Other birders had indicated that Black-throated Blues were seen right near the start of the Oberg loop, a circle-trail at the top of Oberg Mountain that takes hikers around the perimeter of the mountain.  I thought it couldn’t be very far to hike up to the start of the loop, so we decided to check it out as long as we were there.

As we hiked along, the whole family was analyzing every bird sound for the lazy “zoo-zoo-ZEE!”  Melissa stopped once thinking she heard it.  It turns out she heard the Black-throated Green Warbler doing his similar “zoo-zee-zoo-zoo-ZEE!” song.  Once we got to the top of the mountain where the loop started, we veered to the right.  Almost immediately we heard the bird!  But we couldn’t locate it in the dense foliage. Since we hadn’t planned to search for this target on this outing, we decided to head back.  However, when we got back to the spot where the loop started, Melissa said as long as we were here we should take the left fork of the loop trail and actually complete the loop. I concurred. Little did we know what we were in for or how long we were in for it!

It wasn’t long after this ill-informed decision that we started to hear more Black-throated Blue Warblers!  At one point I saw some birds flying in the direction of the song, but I was staring into the sun and couldn’t find them again.  Did we just see our lifer?

During our hike, Marin did very little walking.  She spent a lot of time in my arms, on my shoulders, or on Melissa’s back. We expected this and were managing even as we were now committed to hiking this loop of unknown length.  But then, the big kid grew weary.  Now Melissa and I were each carrying a kid as we hiked up and down the hills on top of this mountain on a goat path of a trail.  Birding was no longer the objective. Survival was.  I felt like I was back in Cadet Basic Training at West Point on a road march through the Catskills with a heavy ruck-sack on my back.  What were we thinking?  This was supposed to be an exploratory trip, not a full-fledged Oberg Mountain experience.

Occasionally we’d make Evan walk for a stretch, and we’d rest briefly at several of the scenic overlooks along the trail.  The views of the Sawtooth Mountains and Luke Superior were incredible. 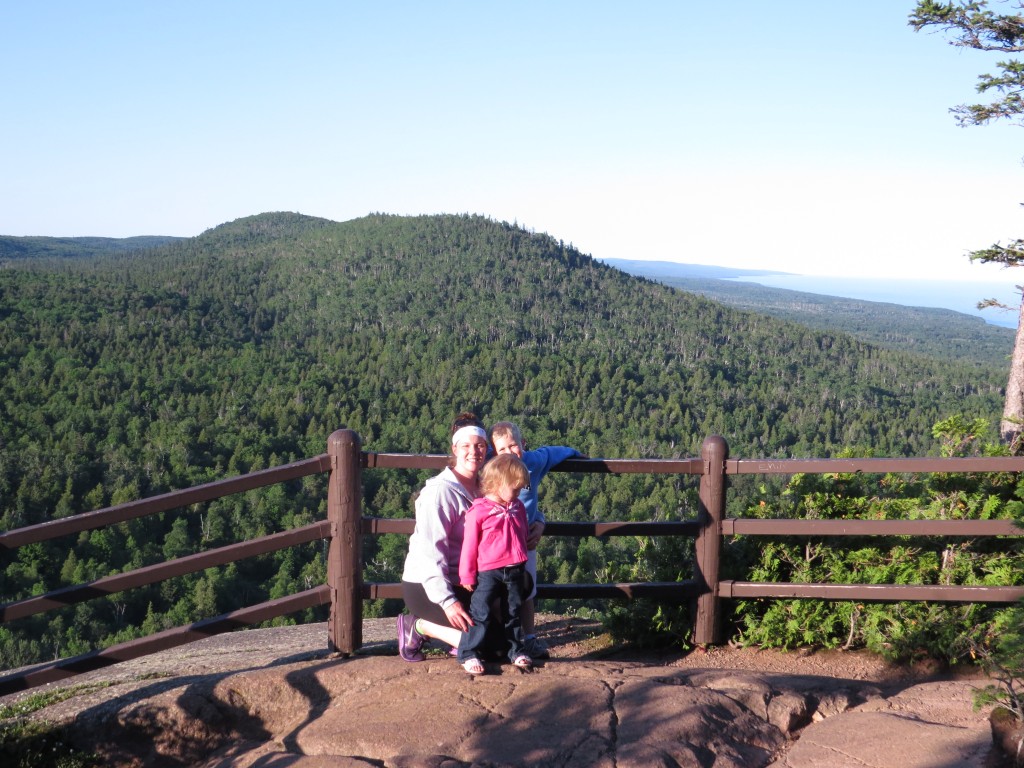 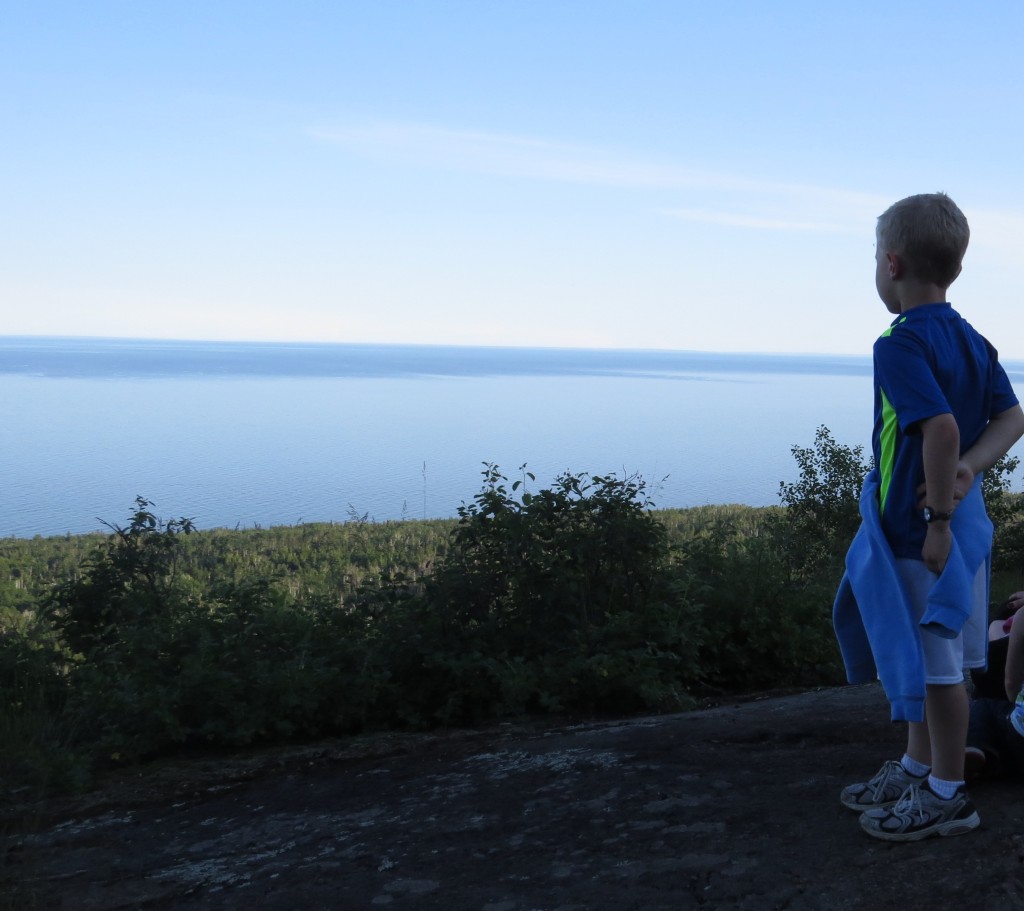 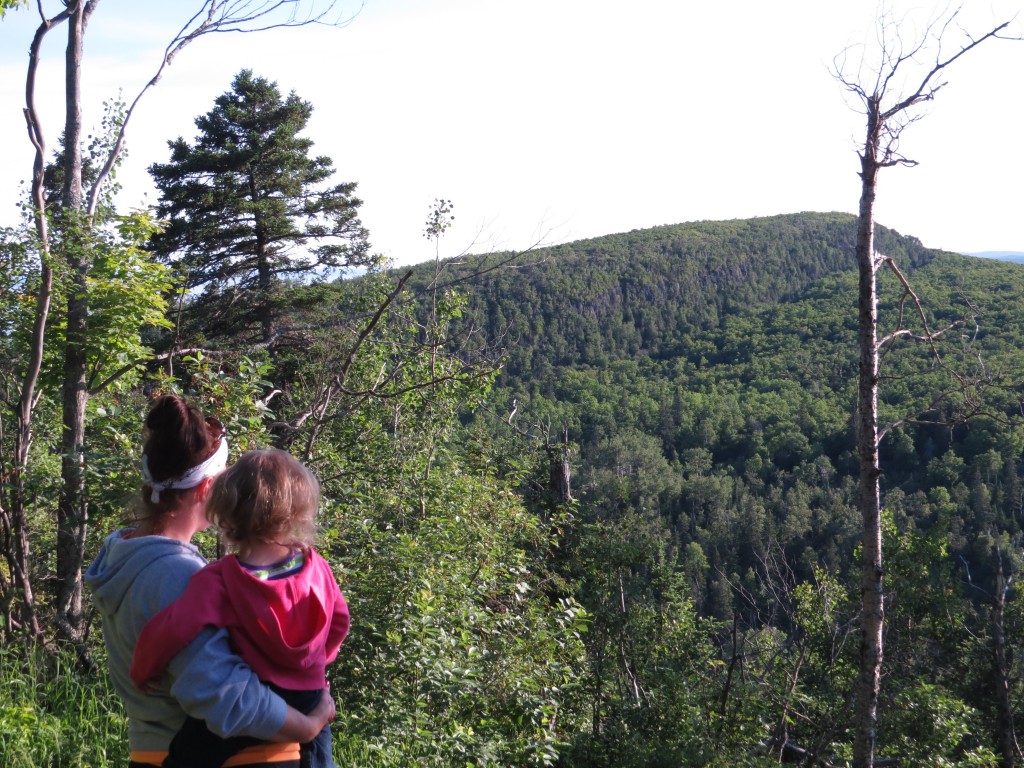 But darkness was closing in, and we didn’t know how much longer we had to walk.  So we pushed on…and on.  As we started to close the loop, we heard the Black-throated Blue Warbler again!  This time it was close.  Everybody was looking for it, especially because I promised ice cream if we found it.  Eventually Melissa and Marin gave up the search and decided to head back down the mountain.  Evan and I wanted to try to see this bird.  Well, I did anyway. Evan, on the other hand, was stuck with me as I was his ride out of this place.  Finally I heard the bird singing from the dead tree in the photo above, but I couldn’t see it!  It was so aggravating.  Then, I did see it, but only as it dropped out of the tree and flew away.  It was a lifer, but a let-down.  I like to get a good look and have solid visual confirmation.  Evan, on the other hand, is a ticker.  A brief glimpse is good enough for him to tick it off his list and move on. In fact, I’m not even sure he saw the bird depart its perch like I did, but he wanted to claim it anyway.

It was time to go.  I was determined to come back in the morning to try again.  It was much nicer going downhill as we left, even more so now that Evan was not spending as much time riding on my shoulders.  Though we were tired and sore, we at least took a break to enjoy this unique tree. 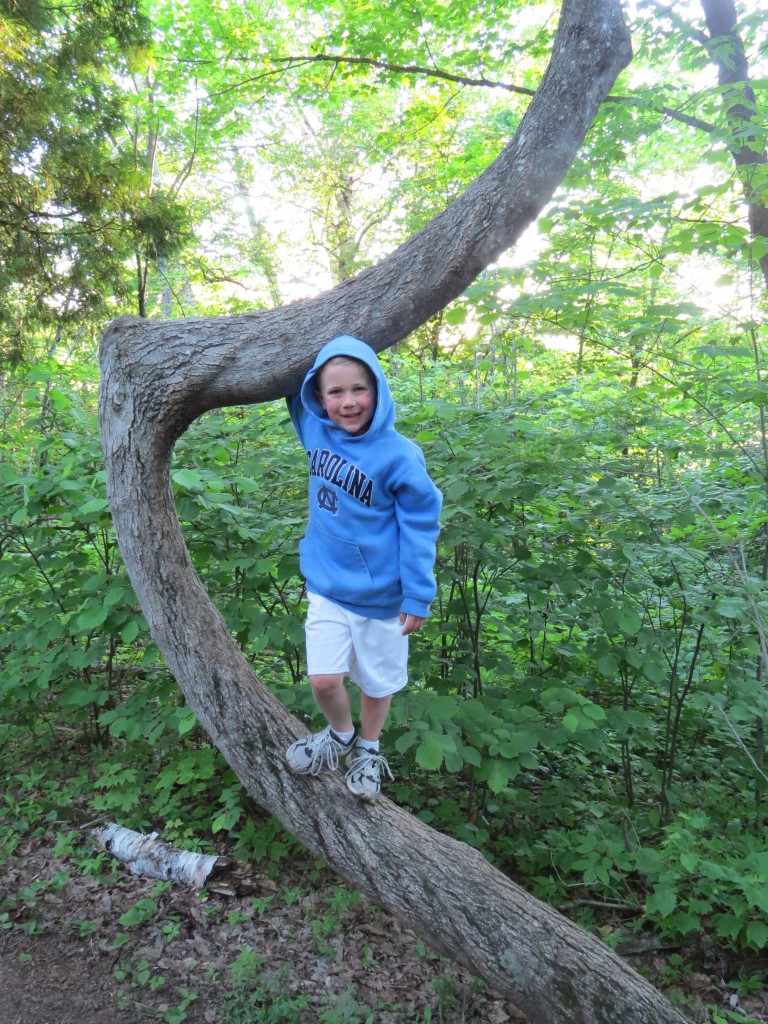 By the time we were all reunited and back in the car, it was 8:30.  We had never even eaten supper.  Melissa and I looked at each other and knew that we needed to do something drastic.  So we headed up the shore to Grand Marais to get some Sven and Ole’s pizza.  We hadn’t even planned on stopping at this favorite restaurant on this trip, but tonight it was the perfect plan.  We got there just before they closed for a late supper or midnight snack.  Sven and Ole’s pizza is amazing.  It is even more amazing at 9:00 when you are starved and tired.

Once back at camp late that night, we all went to bed and slept in.  Except me.  I was up at 5 AM, excited.  I went back to the mountain solo to try to get my good look at this bird.  I expected to hear all kinds of Black-throated Blues.  After all, morning is the peak time for birding.  There was nothing from my target bird.  Nothing.  We heard several the night before.  What was going on?  I birded anyway and was pleased to get a photo of the Nashville Warbler. 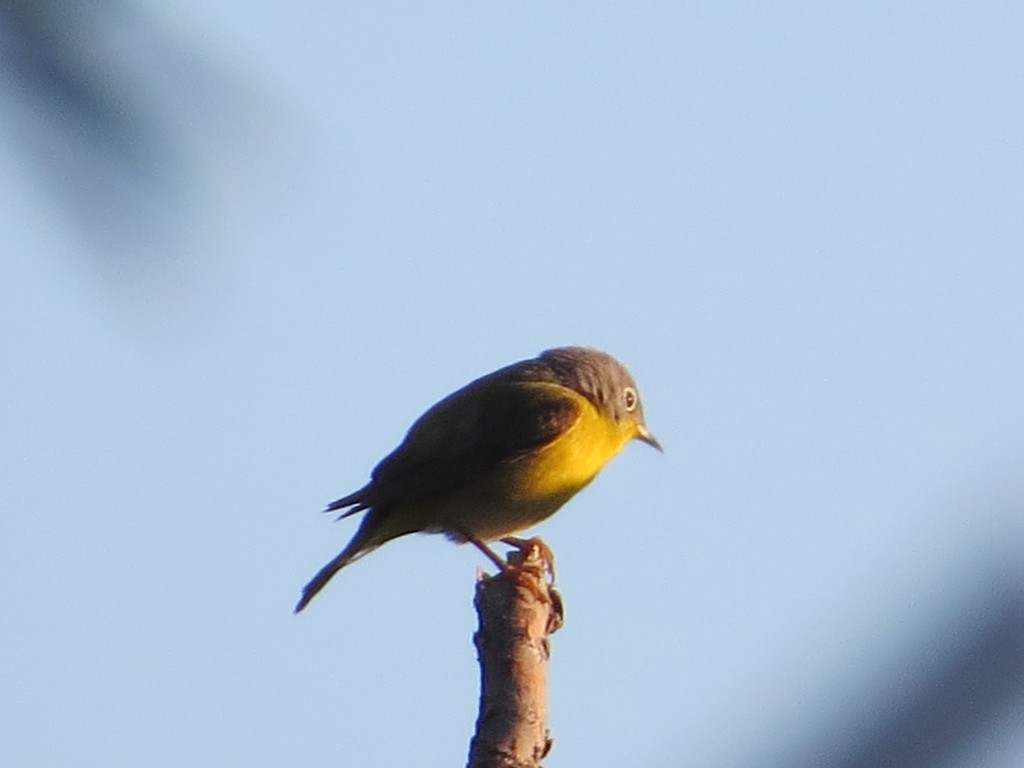 I went back to the location I had “seen” the Black-throated Blue the night before to try one more time to see it for real.  Eventually I heard it in the trees of the forest beneath me as I stood at one of the scenic overlooks.  I decided to use a recording to play its song.  It was a long-shot, but I thought it would bring it in closer.  I didn’t expect anything.  This was proven by my holstered camera on my hip with the lens cap on and the power off.  Because then it happened.  I heard a flutter of wings as a bird landed within 10 feet of me on a young aspen tree just a few feet above the ground.  I almost lost my breath.  Plain as day was the male Black-throated Blue Warbler!  It was, by far, the prettiest bird I have seen so far.  While its name does a good job of describing this bird, it fails to mention how those dark colors contrast with a brilliant white belly.  While perched I got to see him sing his raspy and slow “zoo-zoo-ZEE!” I kept my eye on him, afraid to lose sight of him, as I fumbled with the zipper of my camera case and pathetically tried to free the camera.  I was too late.  The bird disappeared on me.  I tried the recording one more time.  This time I was ready when he came back.  I only got a couple photos, but only one turned out. 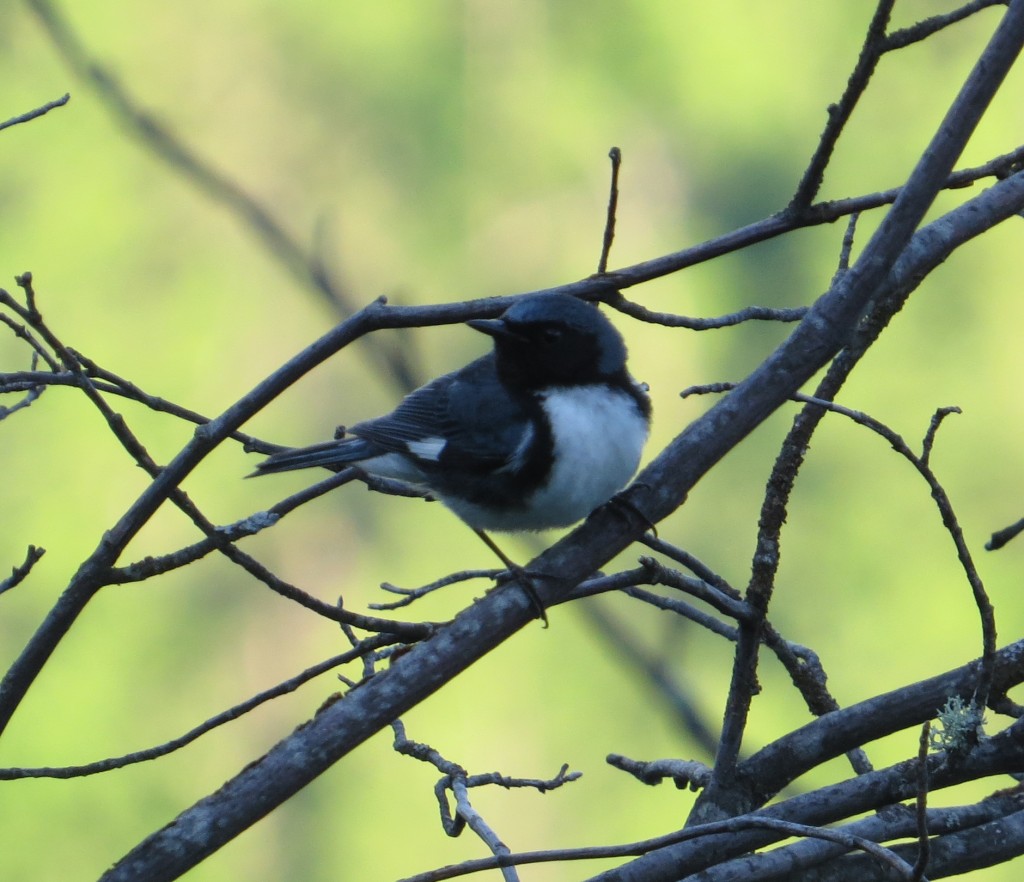 This was a major life bird, and it was the second nailed target of the trip.  I came off my mountain high that morning to find three sleeping campers.  I enjoyed my time on top of Oberg Mountain, so I went back again the next morning.  This time I wanted to photograph a Mourning Warbler I had seen the previous morning.  Though I saw it again, I could not get it to sit still long enough for a picture.  Another highlight bird that I saw but was not able to capture was the Canada Warbler.  I was able to get a shot between the leaves of a Chestnut-sided Warbler. 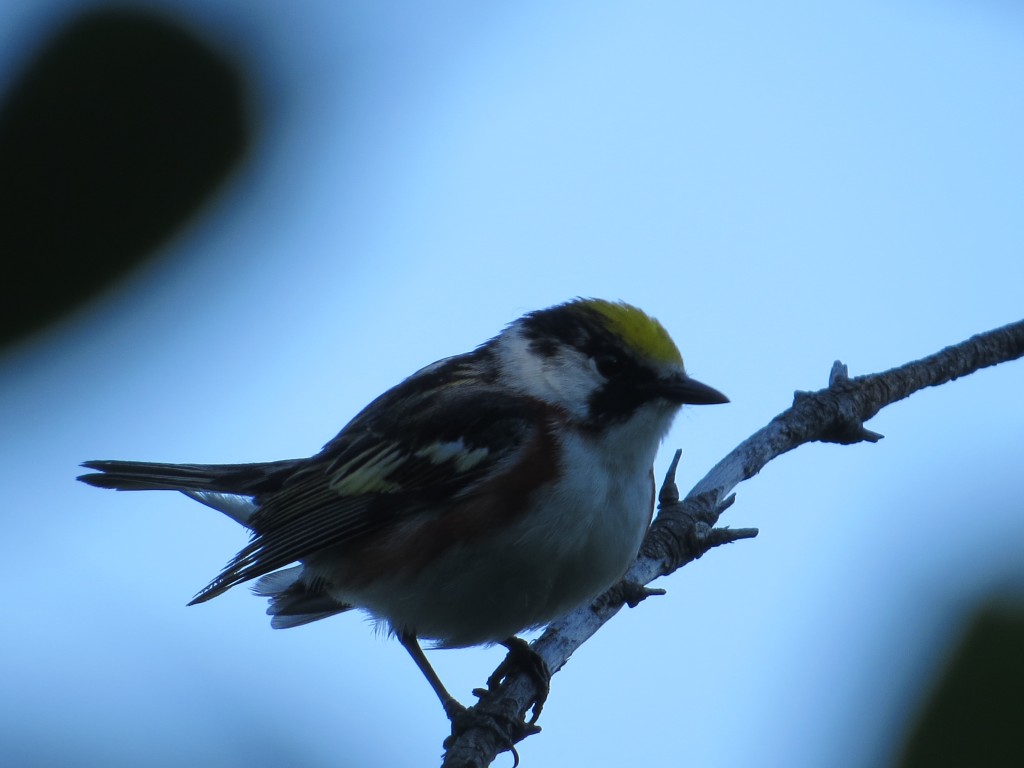 At least the scenery doesn’t move and was just as impressive as the birds. 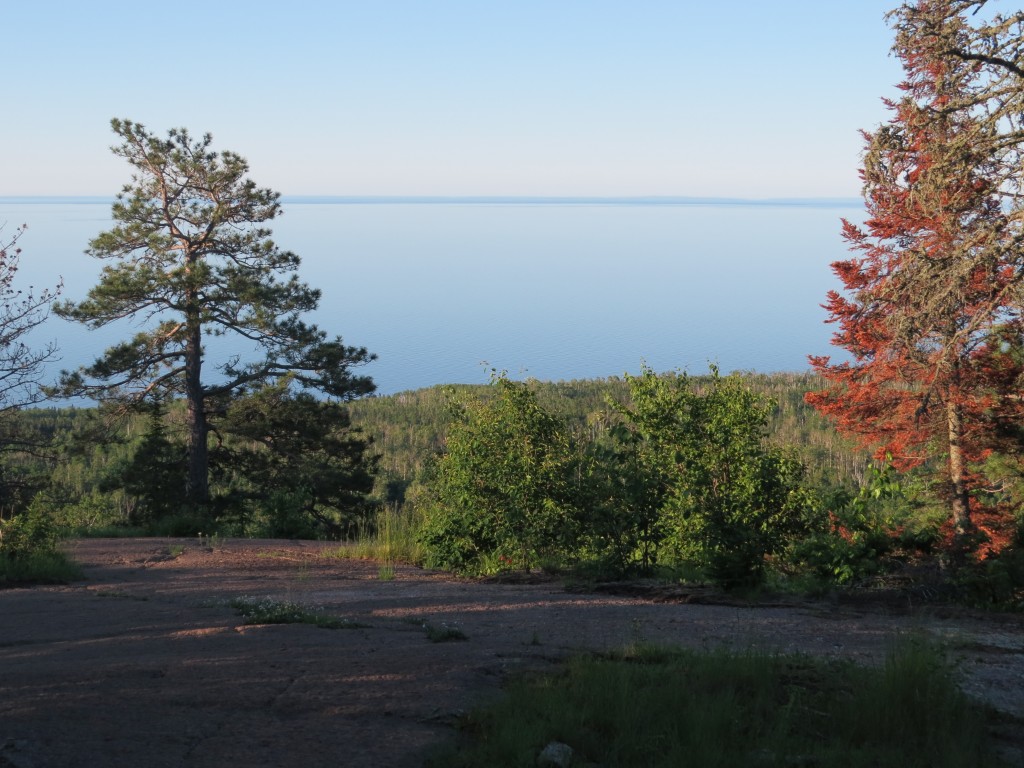