On Tuesday I woke up early to try to see the Bell’s Vireo and get a picture of it.  When Evan and I went on Monday we could only hear it as it was embedded deep inside the shrubs.  With a great deal of patience and a fair amount of wood ticks, I was able to see the Bell’s Vireo several times while out by myself.  The problem, though, was that I’d only see it when it would fly from one shrub to the next.  Once inside a shrub, forget about trying to find it.  I was motivated to get a picture of this one because it is a county record.  By the way, its location is no longer a secret as Randy posted it to MOU-net tonight.

After nearly two hours of chasing the bird, all I could come up with was this butt-shot. Can you find the bird?  If you can believe it, this was a good viewing for me. 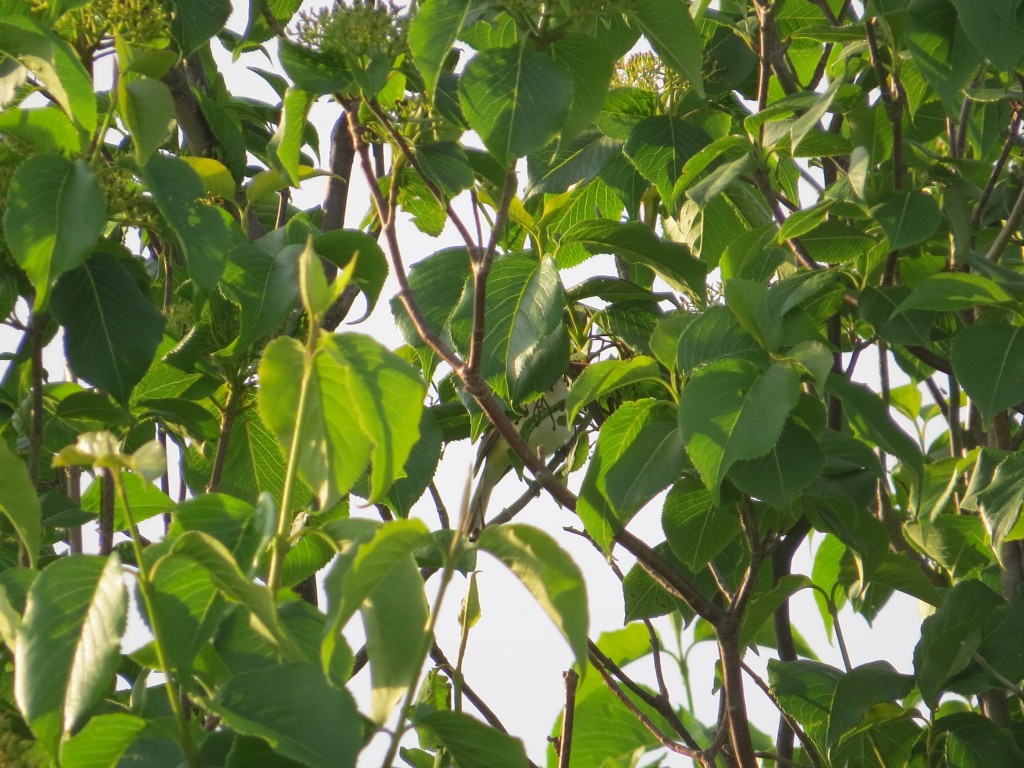 It was a gorgeous morning even if my pants and feet were soaked from the dew of the tall grass.  I added a life bird, the Willow Flycatcher, by making the identification from its vocalization.  Sound is the best way to tell the five Empid flycatchers apart since they basically all look alike.  His “Fitz-bew!” call was very distinctive and heard often from several different birds. I wasn’t worried about Evan getting this lifer.  There appeared to be many of these birds; it’s just a matter of bringing him out there to get it. 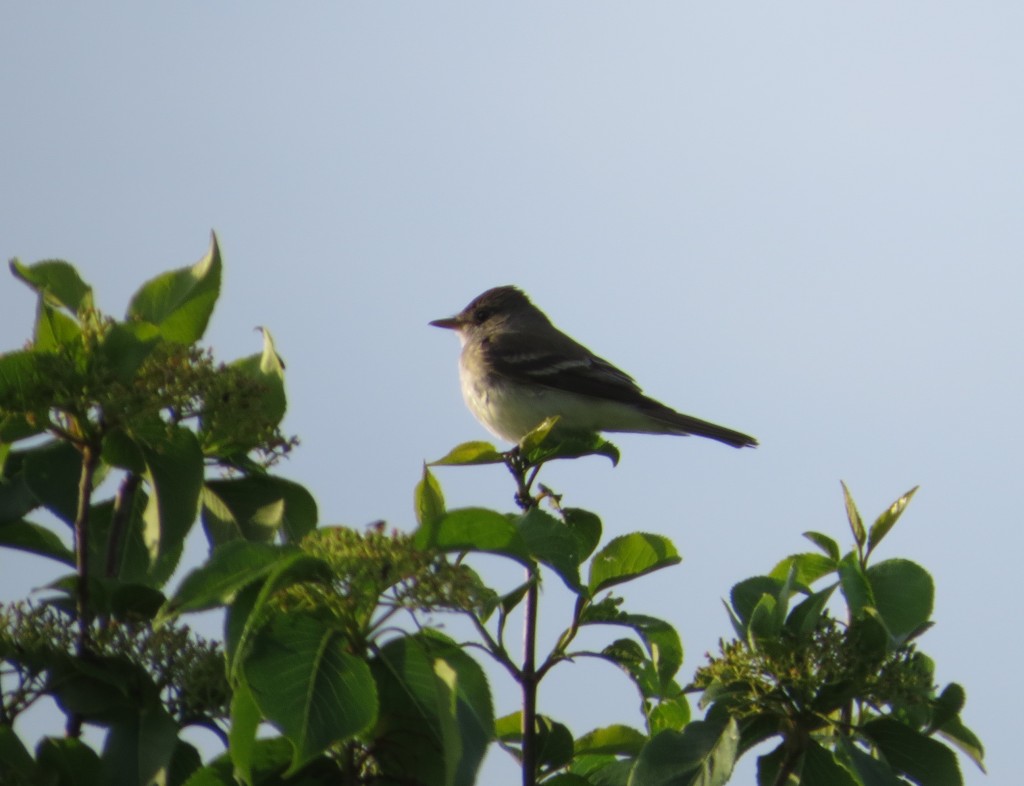 I also couldn’t resist this shot of the Yellow Warbler.  I never tire of seeing them. 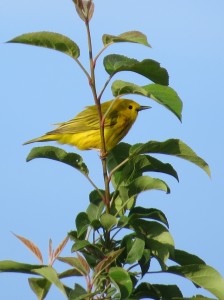 I finally gave up on the Bell’s and decided to head home.  A few days prior, Joel had told me about a Red-headed Woodpecker that he saw just a few miles from this location. This woodpecker was a major target bird for our life lists.  It has an absolutely stunning appearance.  To make it even more unique, the bird’s population is declining due to European Starlings taking over their nesting cavities.  Therefore this bird is becoming increasingly hard to find.  When we went to Blue Mounds State Park, this bird was target #2 right behind the Blue Grosbeak.  Although we hit our primary target that trip, we missed on this one.

As I drove down the road to the residence of the sighting, I didn’t think I’d see the bird. After all, that sighting was a few days ago.  But within a minute or two of being on that road, I spotted a woodpecker on a telephone pole.  I quickly pulled over to get out and look.  No bird.  I figured it just slipped to the back side of the pole.  I was right because soon the bird flew across the road and perched on top of a post only 100 feet away.  It was the Red-headed Woodpecker indeed!  To make it even better, the sun was at my back and the early morning light on the bird was incredible.  Camera time.  I hit the power button and saw the message, “Charge the battery.” You’re kidding.  I couldn’t even get one picture of this amazing bird in this perfect set-up.  All I could do was just watch through the binoculars until it disappeared into a grove a minute later.

This was a bitter-sweet sighting.  The thrill of finding this good lifer was quickly replaced by the depressing fact that Evan wasn’t able to see it too.  That stole the joy I first had. Even Melissa winced when I told her that I found the Red-headed Woodpecker. Because this was such a good bird, I decided not to tell Evan.  This was no LBB (little brown bird). He would have been crushed.

This morning I again woke up early and went out to try to photograph the Bell’s.  After nearly an hour-and-a-half, I gave up without a single picture. Plenty of sightings, but no picture.  Once again I left and traveled down the road that held the woodpecker hoping I’d see it and could race home to get Evan.  No luck.

When I got home, I had to hop in the car again to run the kids into daycare for a few hours.  There was no hurry to get there, so on a whim I decided to take a huge detour to travel the woodpecker road again.  I’m so glad I did.  Shortly after turning onto the road, we spotted the Red-headed Woodpecker on a telephone pole!  It flew into the neighboring yard and back to the poles again, so we got plenty of good views.  Though the light wasn’t as good as yesterday, I was able to get some decent pictures. I hope you can forgive all the pictures; I tend to photo-bomb a great bird when we see it for the first time. 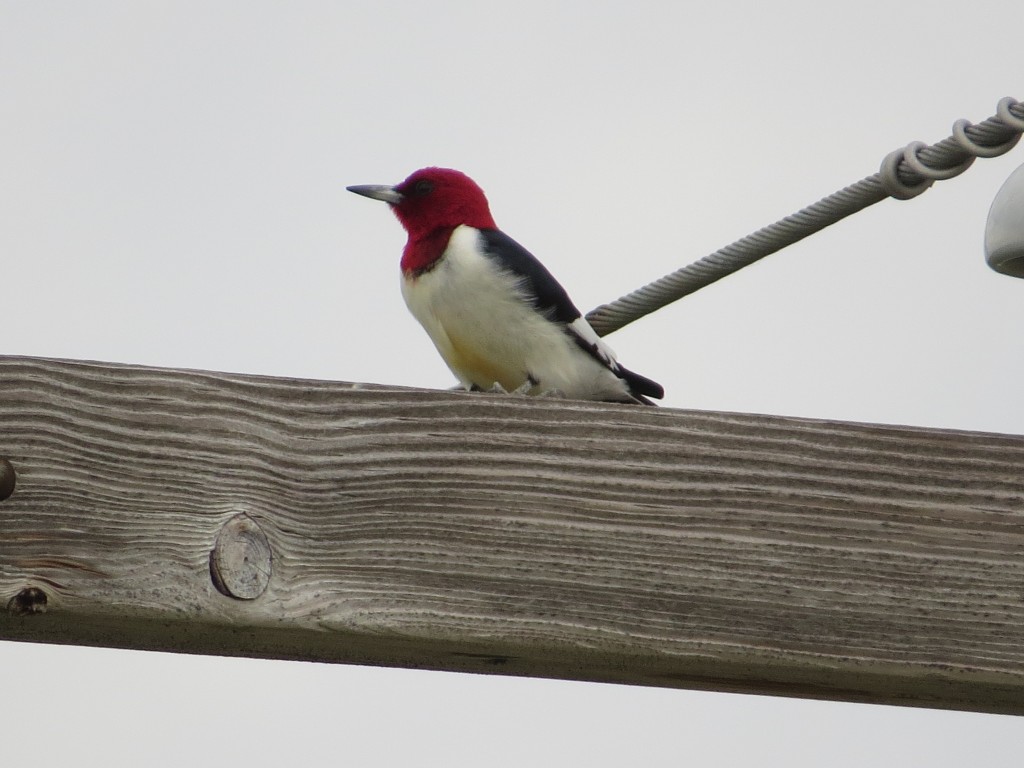 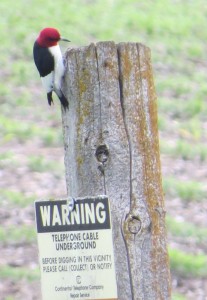 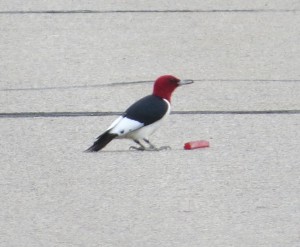 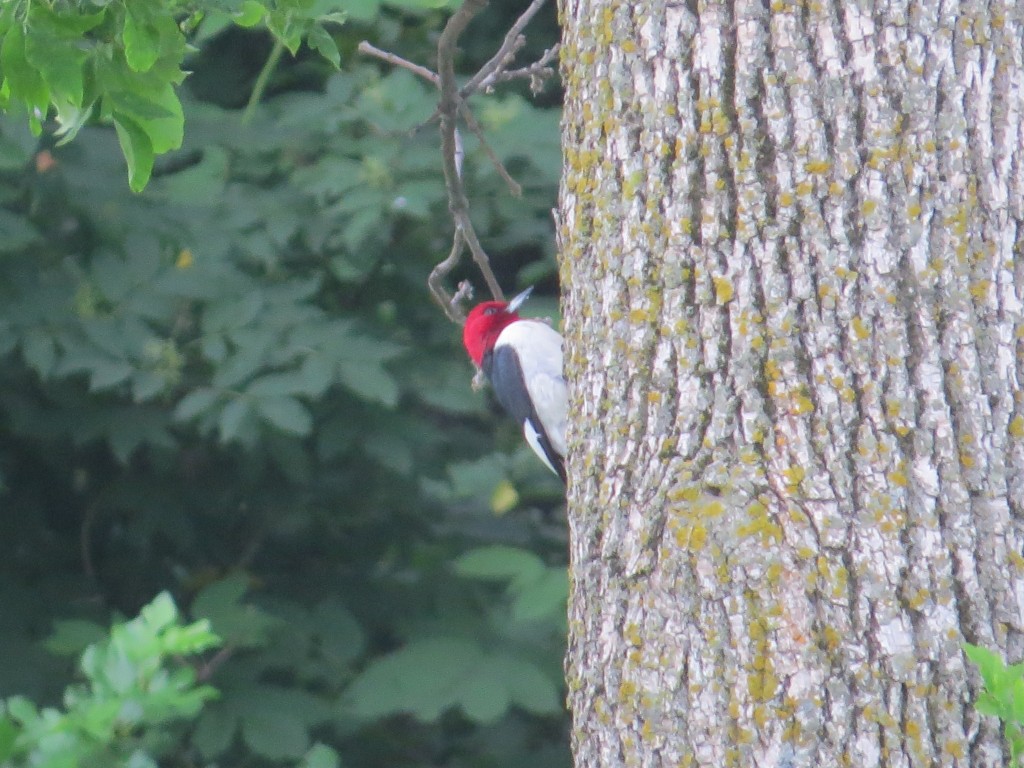 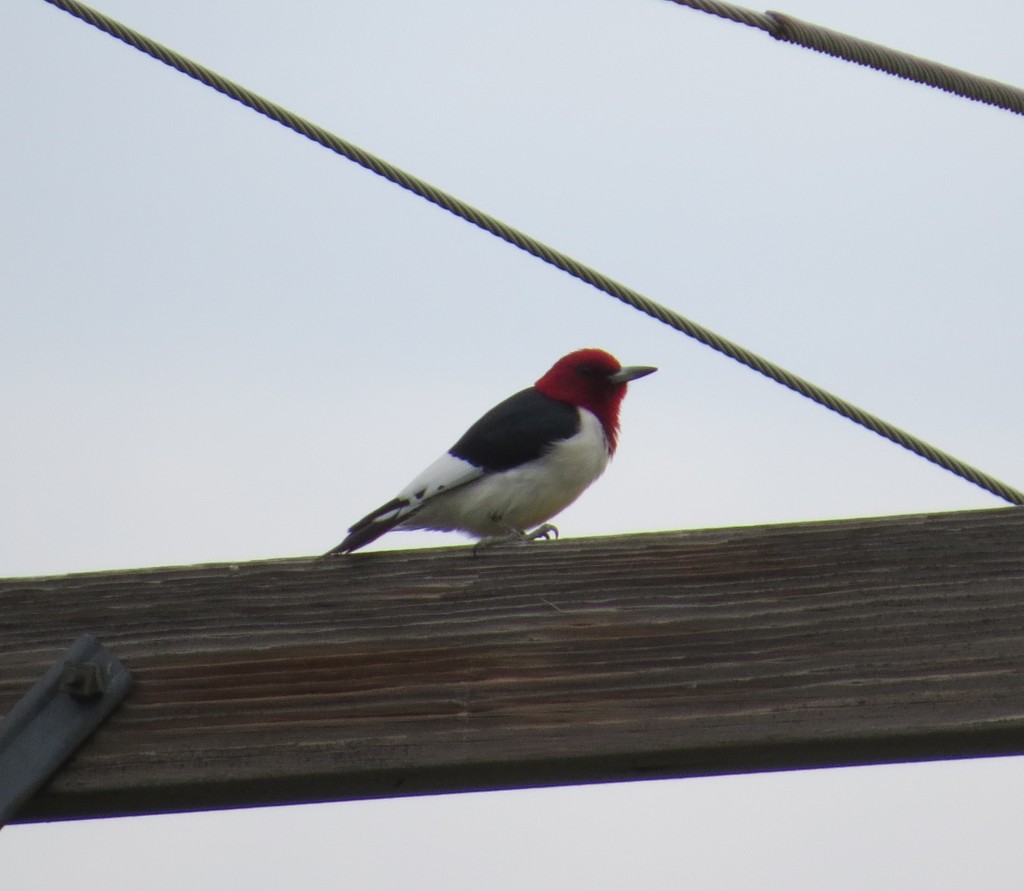 It was such a relief that Evan got the bird.  Now my joy was complete, and it actually felt like I was seeing it for the first time too.

While I was taking pictures, my phone rang.  Coincidentally it was Joel.  He called to say we could go look at a Red-shouldered Hawk that was nesting at his friend’s house. Joel knew from checking our life lists on the blog that we still needed that one.  After photographing the Red-headed Woodpecker some more, we went north to meet Joel.

As we drove I couldn’t believe our luck.  We saw an amazing life bird today, and now we were about to get another!  Once on site, we weren’t able to locate the nest.  Bummer.  I wasn’t worried, though. It will just be a matter of time before Joel finds the nest and calls us back.  We also made a quick stop to look for the Grasshopper Sparrow – another bird that Joel knew we still needed.  That bird wasn’t showing today either.  I’m okay with that.  We had a monumental morning, and these other missed birds just give us something to hunt for in the future.