Fargo.  Not exactly a birding destination.  But we weren’t going there for birds.  Rather, we headed to the great state of North Dakota this weekend to visit my old college roommate, John, and his wife, Sarah.  It had been nearly two years since we’d seen them, so we were excited to make the trip.

Travel always affords the possibility of new birds.  However, nothing really jumped out at me as being a Fargo specialty that we couldn’t get back home.  I considered subscribing to North Dakota’s rare bird list serve so I could ask ND birders about what we might get close to the city.  As I debated whether or not to do this and deal with another state’s worth of bird emails to sift through and delete, the Northwest Minnesota RBA (Rare Bird Alert) came to my inbox.  Normally I read through this summary of recent sightings rather quickly since this area of the state is a long way from home. This time, though, I read it carefully and looked at maps to see if anything was close to Fargo.

There was a report from Clay County which is the MN county right next to Fargo.  The report mentioned the Loggerhead Shrike which is a threatened Minnesota species that we have never seen.  While we want to see all species, this one was on our short-list. This particular bird was found on Co. Rd. 108 at Felton Prairie.  Felton Prairie? What was that – a town, a wildlife management area?  I Googled it and discovered that the Felton Prairie Complex is a cluster of land tracts that belong to Clay County, the Nature Conservancy, and the state of Minnesota.  The Minnesota Department of Natural Resources has designated it as an IBA (Important Birding Area).  That’s the same classification as the Sax-Zim Bog! I discovered that many rarities can be found here – Chestnut-Collared Longspurs, Greater Prairie Chickens, Loggerhead Shrikes, Swainson’s Hawks, Ferruginous Hawks, Burrowing Owls, and more!  The more I read, the more excited I got to go here for some side-trip birding.

I knew Randy would know Felton Prairie, so I hit him up before our trip for advice on how to attack this place.  He basically said to just concentrate on the Chestnut-Collared Longspurs as there are only a few that nest in the state, and this is about the only place to find them reliably.  He gave me his map and told me what road was the hot zone. Armed with this knowledge and a license to go birding from my wife (it was Father’s Day after all), we were set to go to Fargo.

Fargo was an absolute blast.  John and Sarah were great hosts who spoiled and entertained the kids.  One of the things we got to do was go to the zoo in Fargo.  Evan was able to determine some exotic bird was a crane (from Asia) even before we read the sign, and he was arguing he should get to count the Cattle Egrets we saw even though they were in an exhibit that was covered with a net.  I told him life list birds need to be wild ones. Evan and I did determine, however, that we saw the Brewer’s Blackbird which was there on its own free will.  It was a shaky ID, but we’ll count it for now and hope for a more definitive one later.

Later that night we were treated to watch a different kind of bird – the Fargo-Moorhead Redhawks minor league baseball team.  We all had a really fun time at the game.  The whole family even made the jumbo-tron!  I don’t think we can add “Hawkeye” to our life lists, but the kids were super excited to high-five him and get his autograph. Nice photography, John! 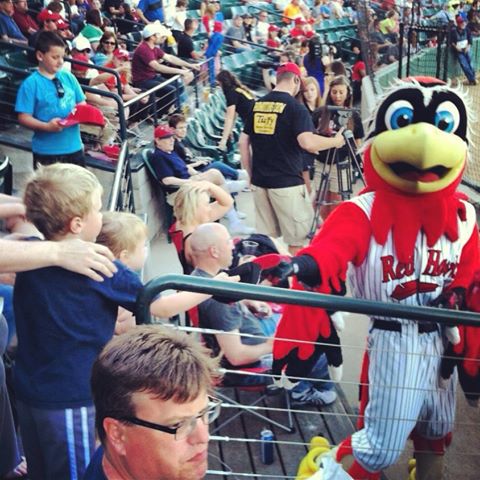 After parting company with our friends today, Melissa and the kids took me to Gander Mountain to pick up my Father’s Day gift – a birding vest!  Now Evan and I will match and be set for more adventures afield.

On our way home we finally got out to Felton Prairie.  I drove down Co. Rd. 108 to look for the Loggerhead Shrike.  As we crept along, a large, loud bird startled us all as it flew right over the road, back and forth.  The Marbled Godwit!  This was an advertised special of this area, so it was on our radar and made identification easy.  It was very nice to get this life bird.  There were actually two of them. 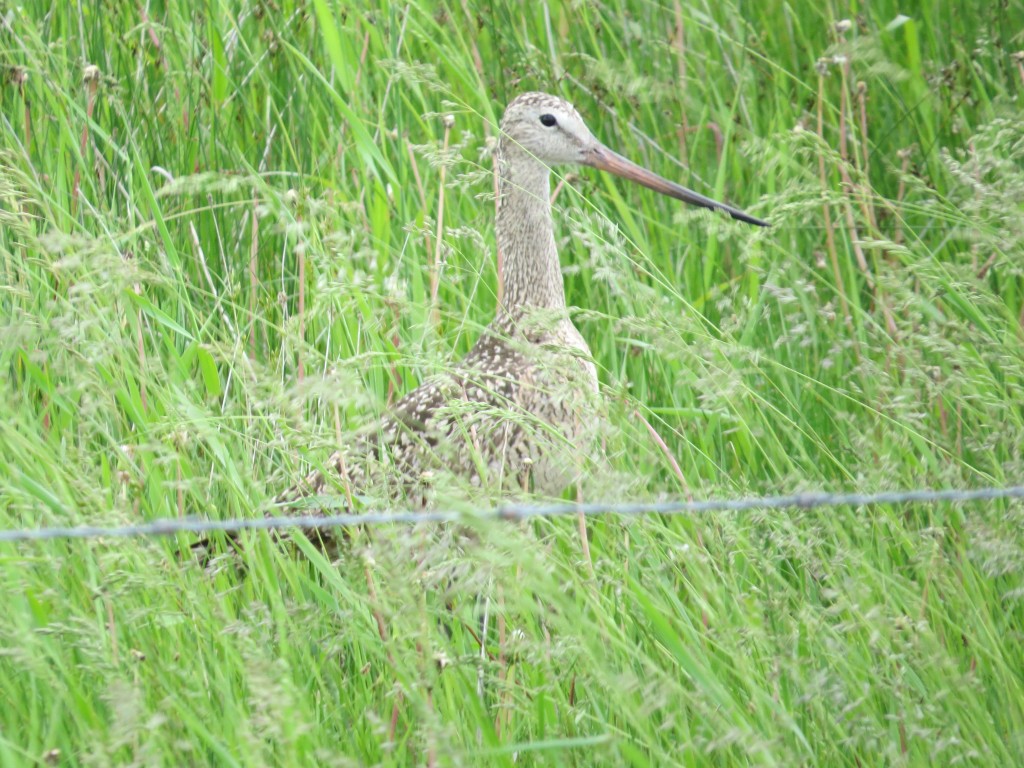 We traveled a mile or so to the end of Co. Rd. 108 where the Loggerhead Shrike is known to frequent.  Nothing.  Nuts.  Well, it was time to head to a ranch road running through private land that is nicknamed Longspur Road.  We were after the Chestnut-Collared Longspur.  It was extremely windy today, so there wasn’t a great deal of birds to be found.  We were delighted to see several more Marbled Godwits floating in the air as they flew into this fierce wind. 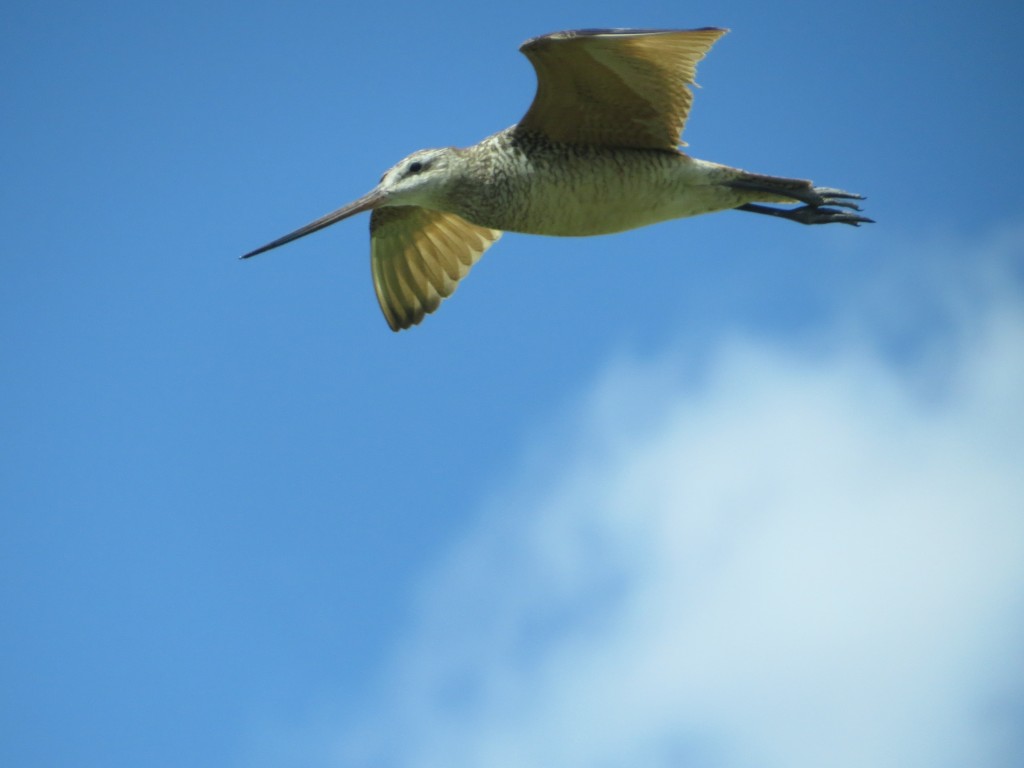 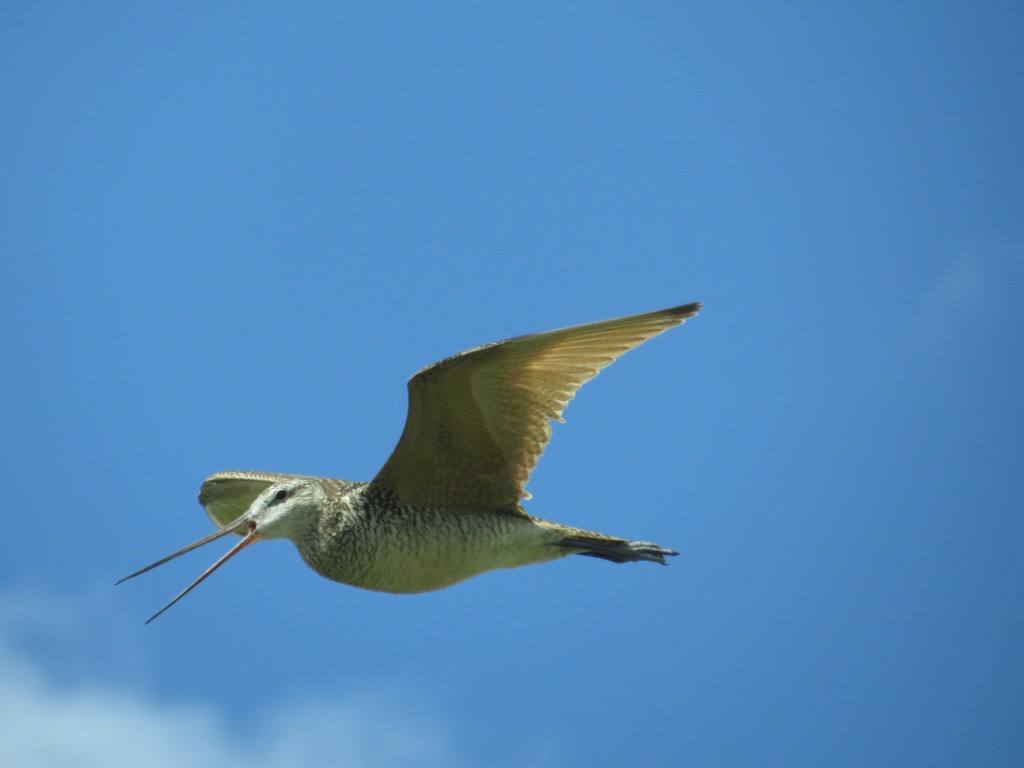 We got to see lots of Bobolinks and Western Meadowlarks, but none of the other Felton Prairie specialties were showing.  It was time to make the long trek home.  I couldn’t let the Loggerhead Shrike go, though.  They are declining in numbers and are very difficult to find.  Co. Rd. 108 has been a known hot-spot for them for years.  So, I decided to drive the 5 miles back to that spot and check it one more time.

I made the right decision.  I spotted a bird on the telephone wire by the road and saw that it was our target!  It quickly flew far, far away.  No pictures, but we saw it.  We continued down to the end of the road where I found some more birds on the wire.  One looked like it could be another Loggerhead Shrike.  Sure enough, it was!  I parked far away so I didn’t spook it in order to get a quick picture to document this sighting. 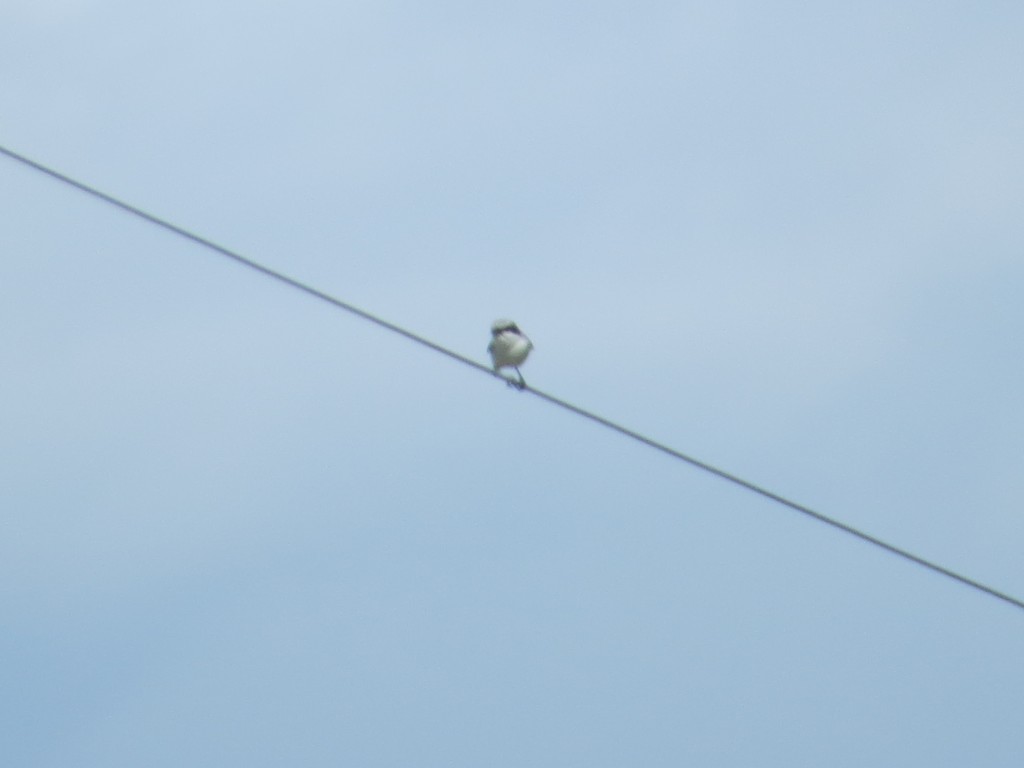 The quality of the picture was poor, so I tried to inch the vehicle closer to get a better shot.  This bird didn’t like that and flew away, far out of sight.  Even though we don’t have a good photo, it was still very cool to see not one, but two Loggerhead Shrikes! This was another summer target bird checked off.

It was a great trip and a great day.  We saw some good friends, secured a couple of notable lifers, and got to hang out as a family.  It doesn’t get much better than that.