When I asked Joel, another birder in our area, about Warbling Vireos, he advised me to learn their song.  He said they stay in the leafy treetops and are hard to see, and the sound is really the only way to track them down this time of year. Joel told me that we shouldn’t have to leave the yard to find one. We took his advice and learned the song – a fast, loud warble with a rising note at the end.  It’s very distinctive. (Listen to the song yourself.) Ever since we learned it, we have been hearing them all over – in the neighborhood and on our Blue Mounds trip.  However, we’ve had a tough time viewing them.  After several attempts of tracking down the sound, I have caught glimpses of the bird but without the aid of binoculars or a camera.  Evan still had never seen one.

The good news is that vireos are persistent singers.  They just don’t quit.  The bad news is that these Warbling Vireos like to change positions a lot.  They don’t sit still and are often hidden in the foliage.  To make it more challenging, they are plain birds that don’t pop among the leaves.

Today we heard one in the neighborhood and went on the hunt.  Several times I saw it for a brief moment before it would flit to another tree where it would just be absorbed into the leaves.  Only when it would fly would we catch sight of it again.  On one of the these flushes, Evan was finally able to see it, securing this life bird for himself.  After a lot of patience, I finally got a picture when one landed in some bare branches in our back yard. 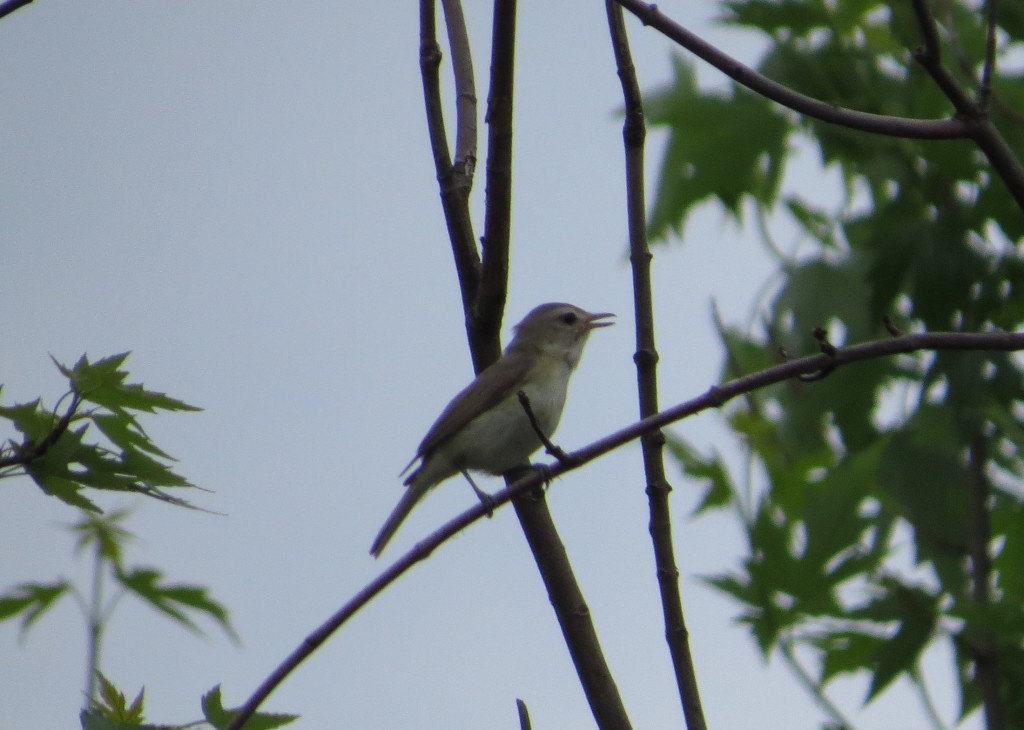 It was fun to get a life bird and new yard bird today, and it was also fun to again be successful at tracking a bird down by sound.