I woke up early on our last day to a strange, unexpected sound – birds singing!  There was no pitter-patter on the roof! I think the change in noise woke Melissa at the same time because she said, “You guys better get out there.”  No kidding. We had to head home in the afternoon.  This was our only chance. It was 6 AM, and I hustled out of bed to wake Evan.  He’s a hard sleeper, but he also recognized this opportunity and readily woke up.  We both quietly put our gear on, careful not to wake Marin.  When just Evan and I go out we can do some serious birding. He’s remarkably hardy for a 6-year-old, willing to go on long walks or out into wet conditions.

As soon as we slipped out the door, we heard a life bird singing in the neighboring camp site.  The sound was that of the Warbling Vireo.  Joel, the birder who put us on to Cliff Swallows, told me the importance of knowing its song in order to find it as it hangs out in the leafy treetops and is hard to see.  He said we should be able to find it in our own yard.  So I studied the song, and that’s what we were hearing this morning.  We looked for maybe a half a minute before giving up.  After all, we were here for a very specific bird and couldn’t waste these precious rain-free minutes on something we could get at home.

We got in the car to make the two-mile drive back to the interpretive center to search for our target.  Almost immediately, the rain started back up.  Ugh.  However, it was really light, and the birds were still singing everywhere.  We didn’t hear much the day before. Apparently they’d had enough too and were going to resume their normal behaviors in spite of the rain.  Good.

Evan and I poked around the interpretive center on the Bur Oak Trail for all of five minutes when he started complaining of hunger. Searching for this bird was full of starts and stops.  Rather than going back to the camper and risking waking Marin, we made the short drive to Luverne to grab some McDonald’s.  Twenty minutes later we were back in the same spot hunting for the bird.  There was bird activity this morning – Northern Cardinal, Brown Thrasher, Western Meadowlarks, Tree Swallows, Mourning Doves – but no Blue Grosbeak.

We walked back to the car to give up.  After all, it was raining.  I had a tough time letting go, though. The top of the mound where the prairie meets the the oak woods was beckoning me.  I’ve read that these grosbeaks like this type of edge.  Evan was tired and wet, but he agreed to go up the grassy mound with me.  Once on the prairie, we followed a trail that hugged that edge of the oak woods.  There were several trail junctions that would take us either back out onto the prairie mound or back into the woods.  I let Evan pick our path a couple different times. He chose one that wound through the oak/prairie edge and reconnected with the Bur Oak Trail in the woods.

As we walked we heard a very loud bird song from a nearby oak tree.  Was it?  I’ve mentioned before that my ability to remember anything involving sound is really bad, and we didn’t have the iPod along.  I asked Evan if he thought it was the Blue Grosbeak.  He told me he thought it was.  We couldn’t find it though, and I was not sure that we were actually hearing our target bird.  Finally Evan had enough and wanted to go back to the camper.  We turned around to go back, but this mystery bird kept singing.  It was close. I just couldn’t give up. Not now, not when we had a good lead.  I told him I just wanted to walk the trail a little longer until we reached a certain rock outcropping a hundred feet away.  Evan stayed put while I searched.  Once at the rock, I could tell that the bird was somewhere in the large oak right by the path.  But I couldn’t find the source of the sound.

Eventually I gave up and started to head back.  But the bird kept singing.  I decided to make one more concentrated look from a different vantage point.  I would wait for each time the bird sang to try to hone in on its location.  Then, somehow, I spotted the singing bird at the very top of this oak tree nestled among the large and plentiful leaves.  Were we right about this being the Blue Grosbeak? It seemed odd that it would be so high; I’ve read they are mostly in shrubby vegetation close to the ground. I pulled up the binoculars. I could hardly believe it.  I was looking at the very image that had been taunting us all weekend  – a dark blue bird, rusty wing patch, and a chunky bill.  The Blue Grosbeak!  I pointed it out to Evan and then started snapping away with my camera.  Not only did we find our bird, but at this particular moment there was no rain. 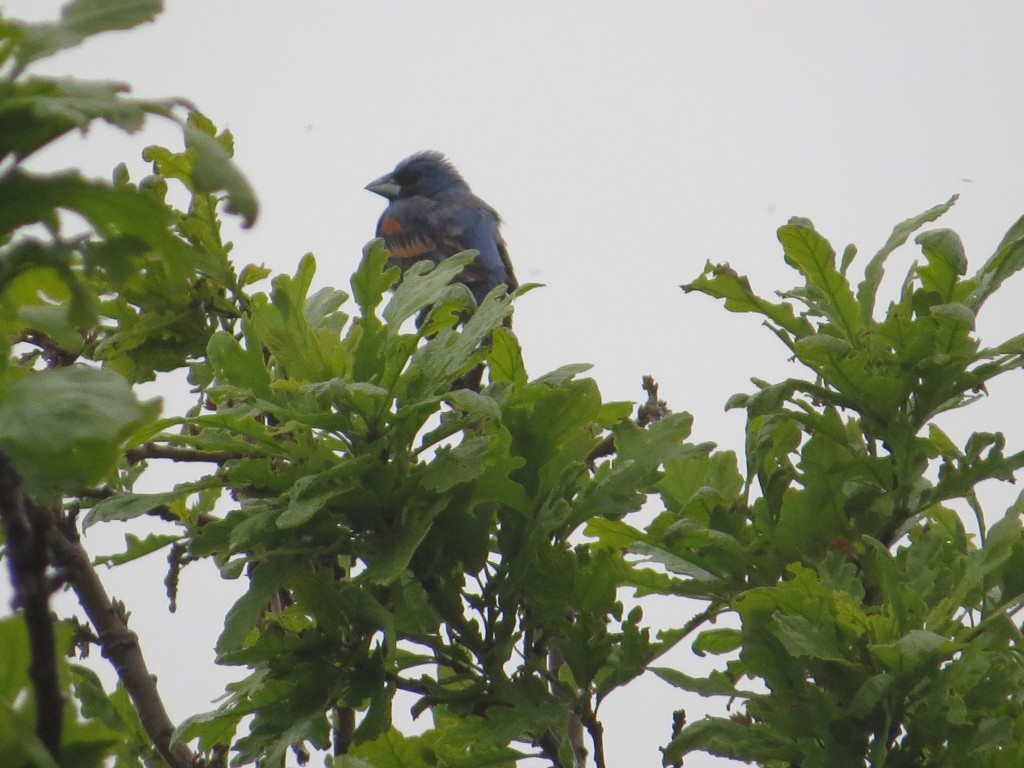 The thrill of victory was incredible.  We got our target.  What made it even better was that we got it through hard work and not just luck.  Our studying and visiting led us to the right vicinity, and learning the bird’s song is what ultimately led us to success this morning.  It was also a team effort.  Evan’s confidence that we were hearing the Blue Grosbeak and my persistent searching helped us meet our goal.  Wow.

This male was busy singing away as he’d been doing all throughout our search.  He was 30-40 feet up and was not bothered by our presence, so I was able to get closer and change vantage points. 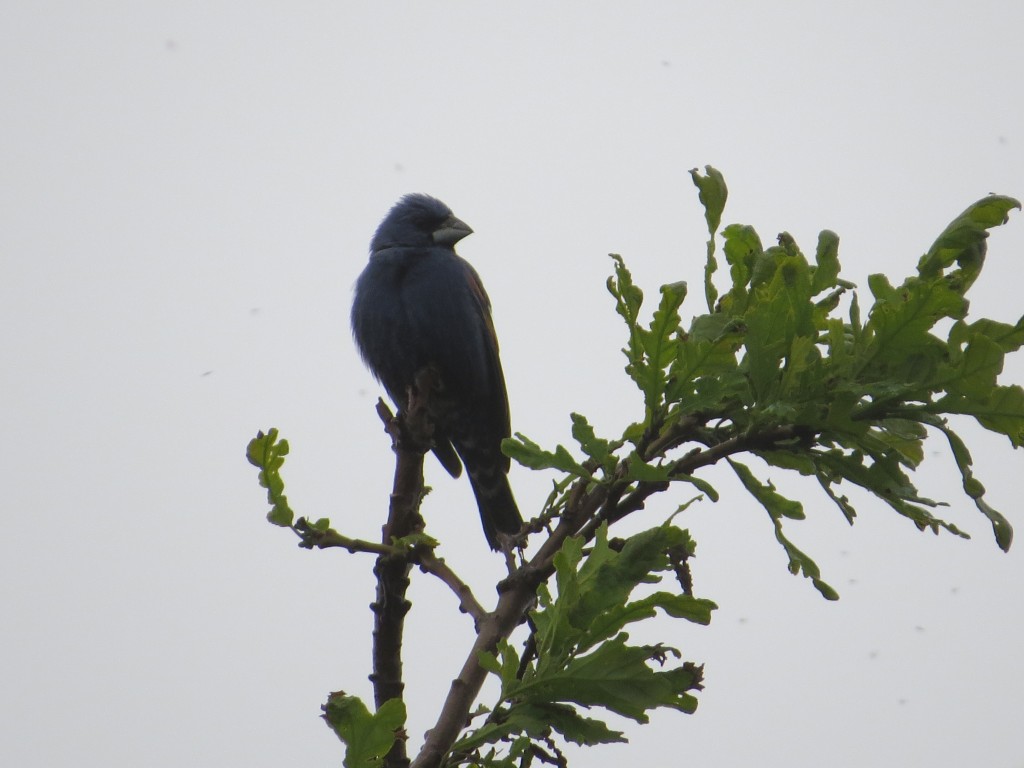 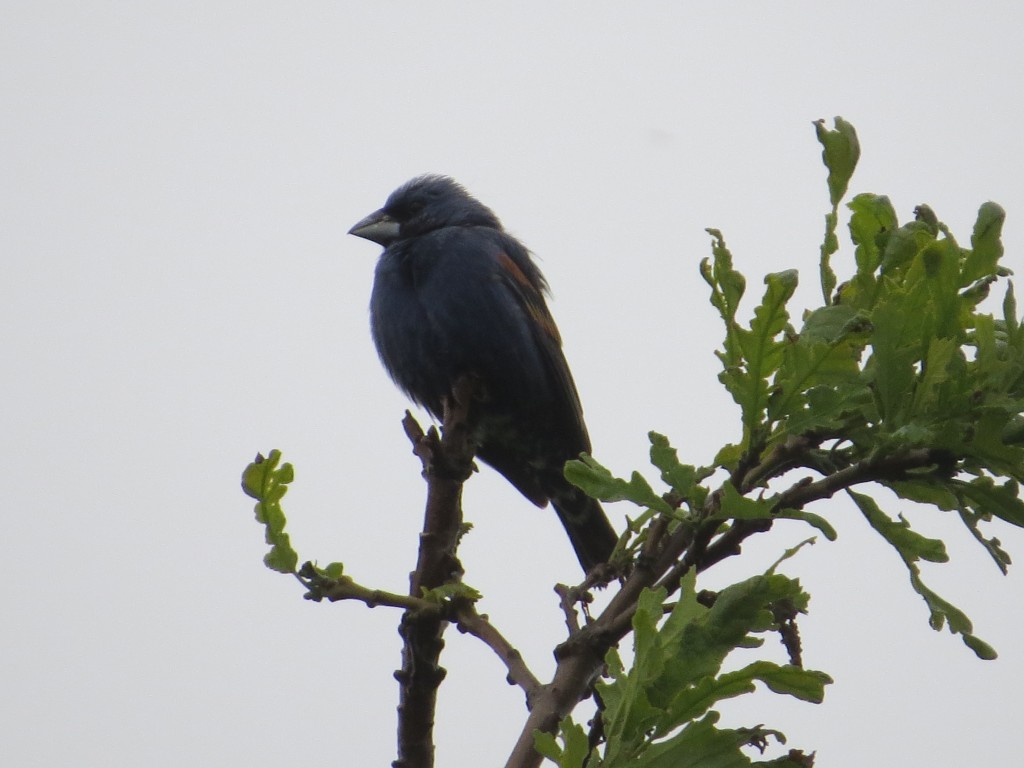 Here you can see him doing what helped us find him. 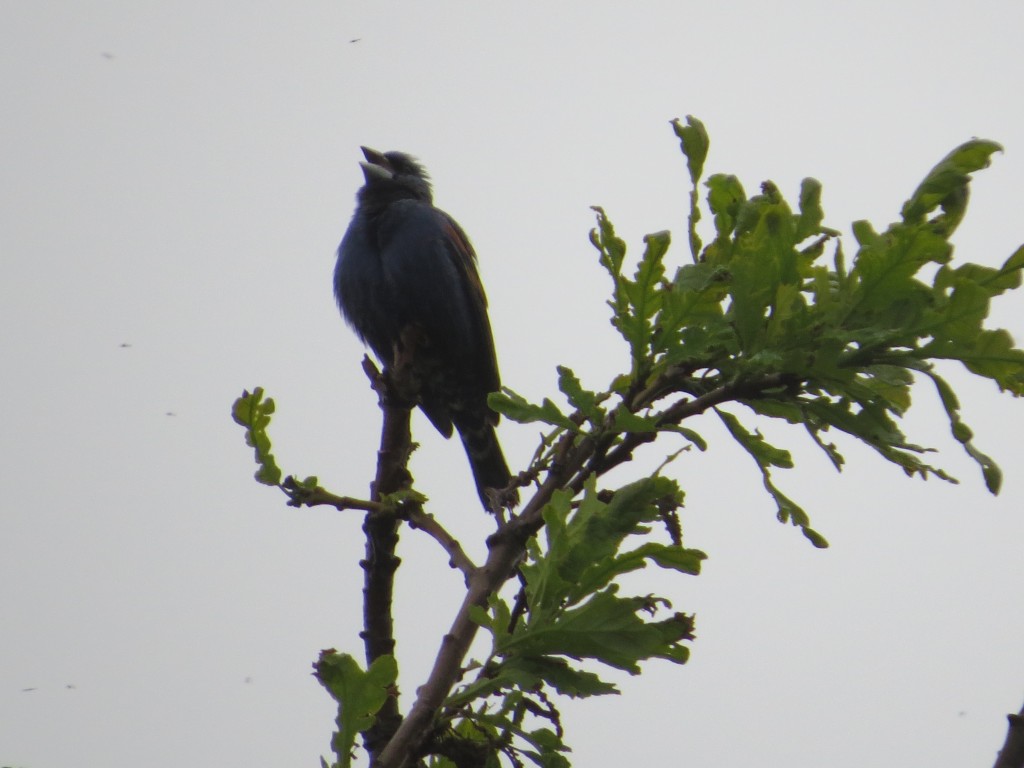 I figured 20+ pictures was enough to get a decent image or two, so we decided to go back to the camper for real.  As we walked out, Evan said, “Dad?”

“I want to go buy that key chain now.”

I couldn’t help but smile.  “You bet, Evan.” As I write this post while drinking my cup of coffee, I regret not getting myself that mug to remember this day.  Next trip to Blue Mounds.

We were feeling good.  We got back to the campsite and were greeted with pancakes and bacon!  Nice!  Not only were we flying high on our victory and good food, but the rain had quit!  Everyone’s mood improved greatly.  Melissa was able to get out for a run, and the kids and I went for a hike.  We left the dirty dishes; we didn’t know when the rain would start up again.

We didn’t see much new on this hike.  Well, Melissa did.  She saw a lot of the park as she ran much further than she intended.  Good scenery and not knowing the trails led her to a six-mile run/walk!  I got a chance to photograph some of the park’s scenery, and Evan finally got a chance to ride his bike. 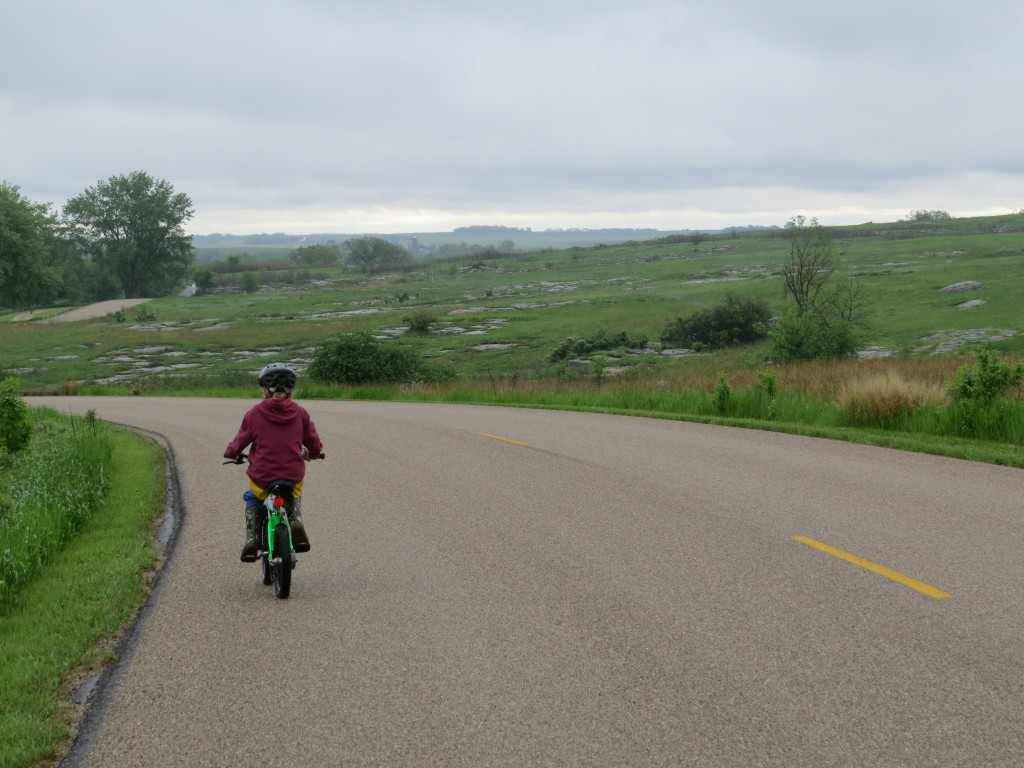 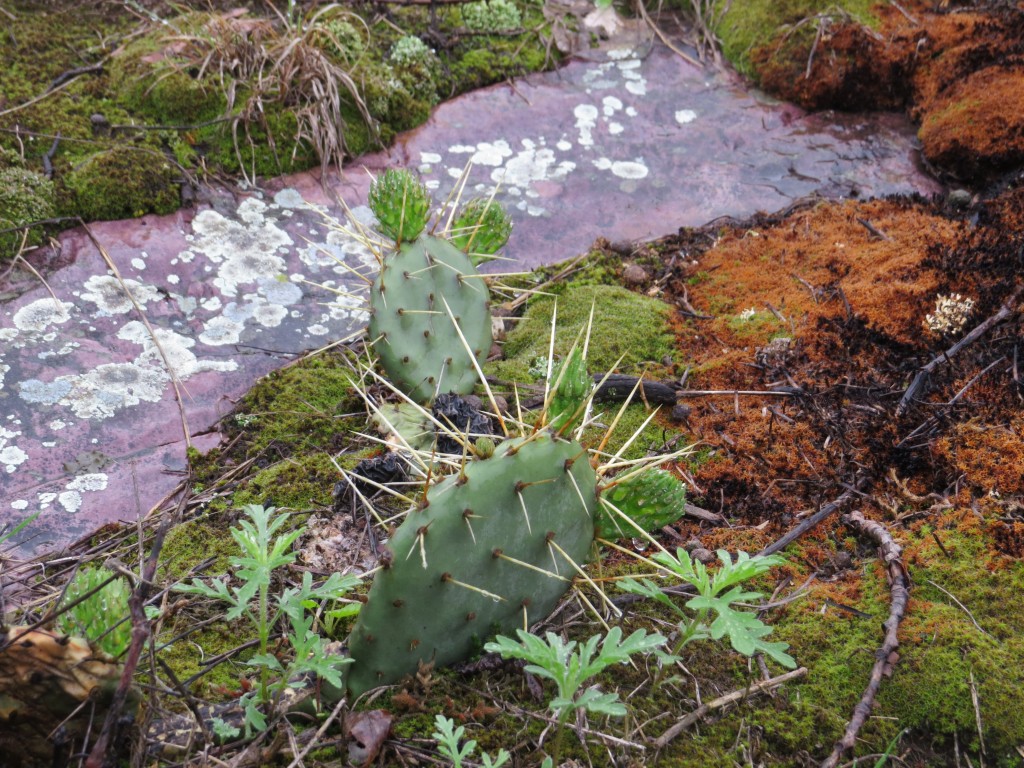 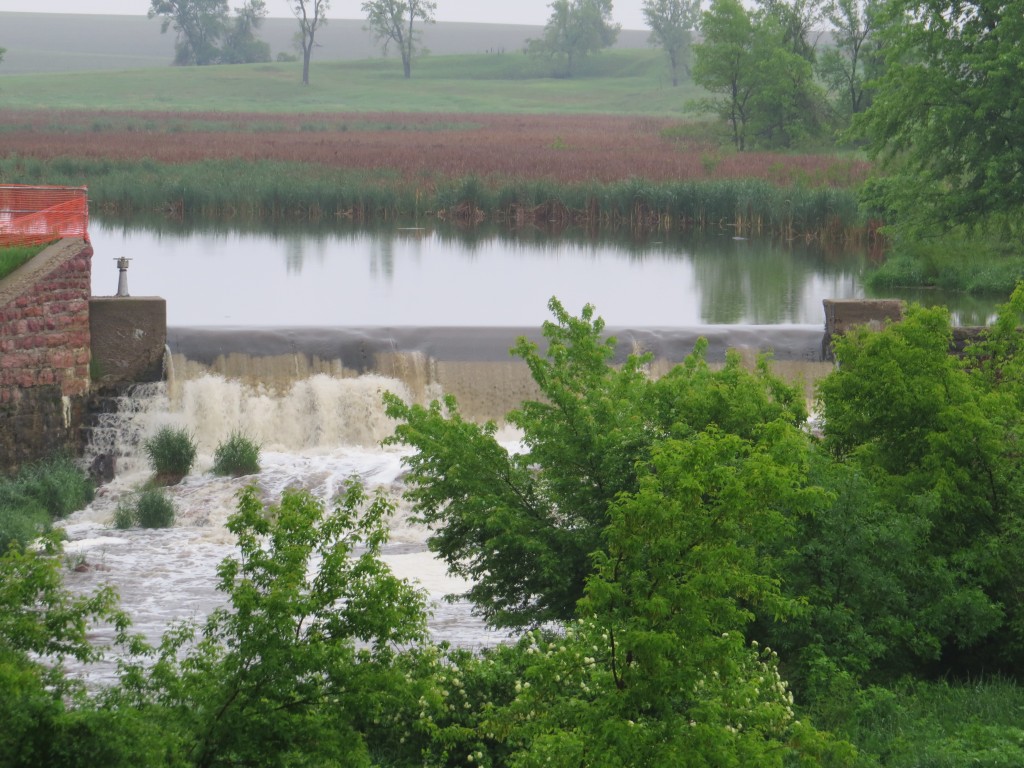 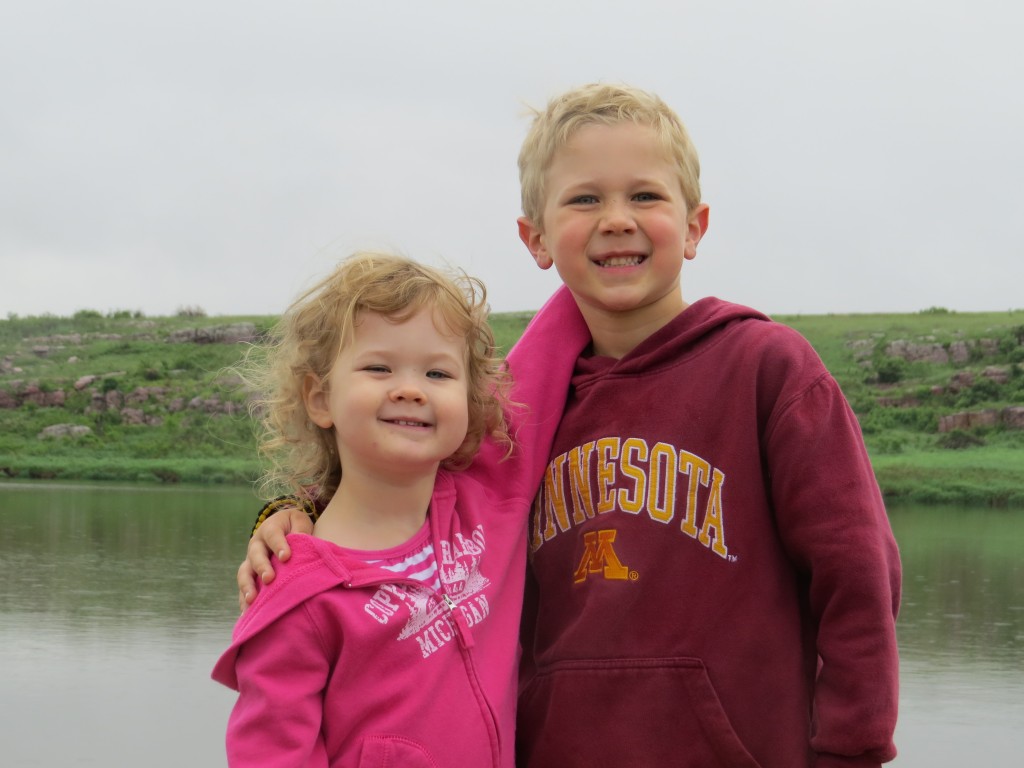 Once we all got back to the campsite, it was time to pack up.  As the morning went along, the day turned out to be quite nice.  We even saw the sun for awhile.  One of our stops on the way out the park was the interpretive center.  Melissa hadn’t seen it yet, and I needed to report our Blue Grosbeak sighting for other interested birders. 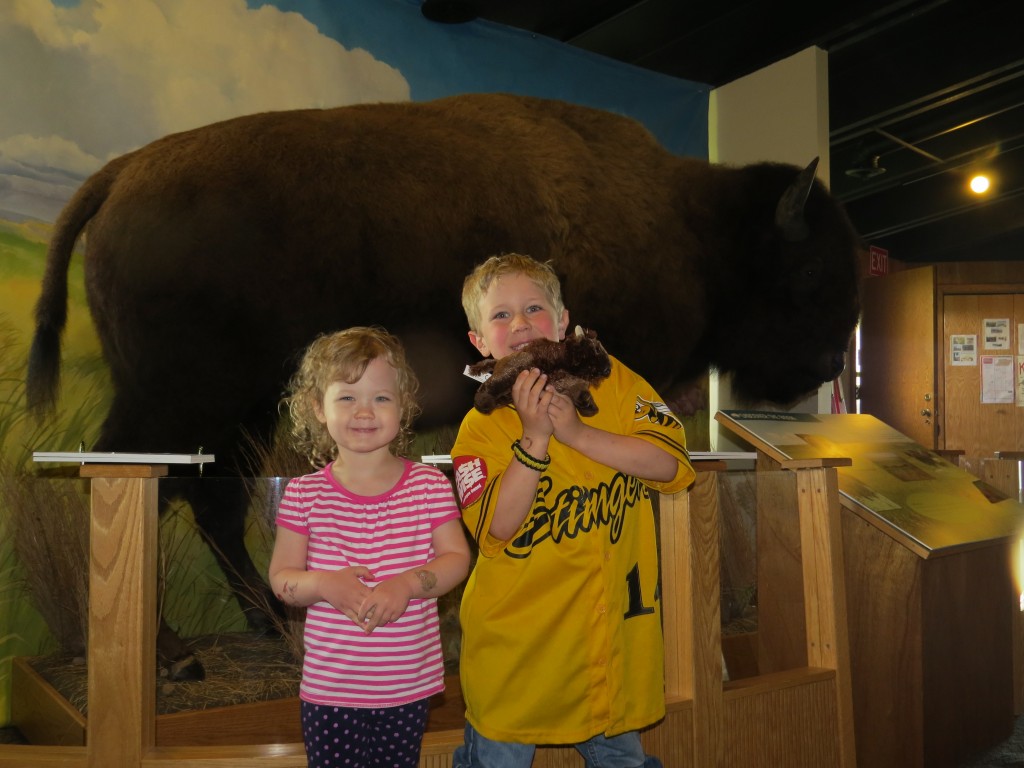 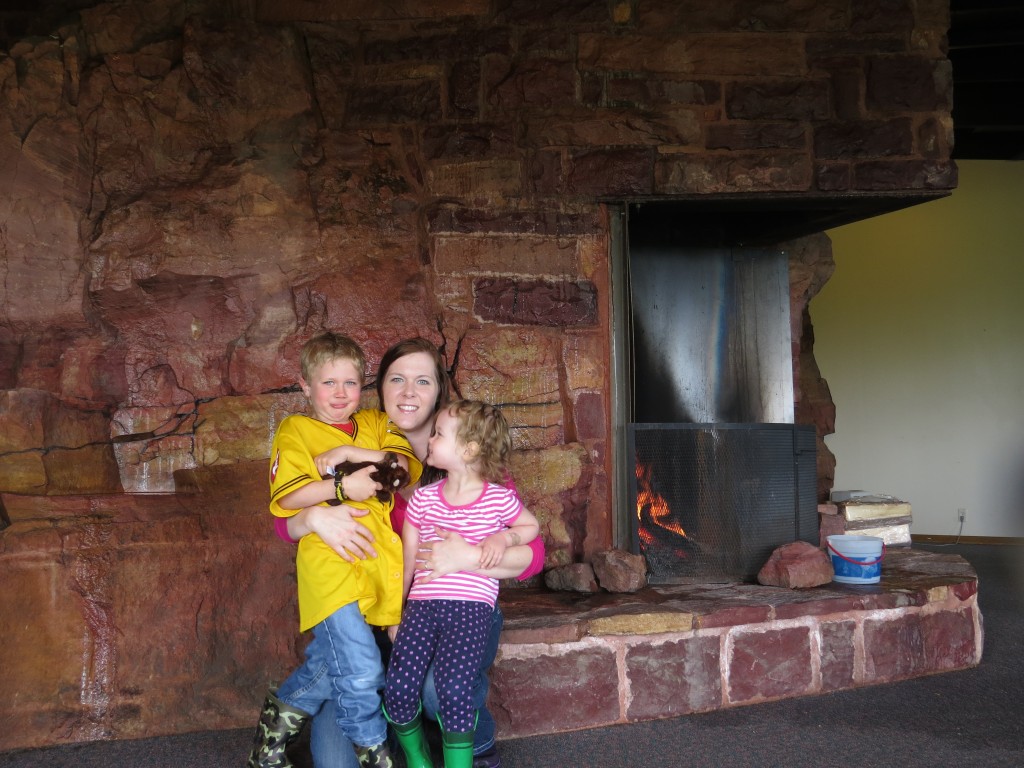 It was so nice to finally enjoy the sights of the park.  Hopefully next time we can do more exploring by hiking. 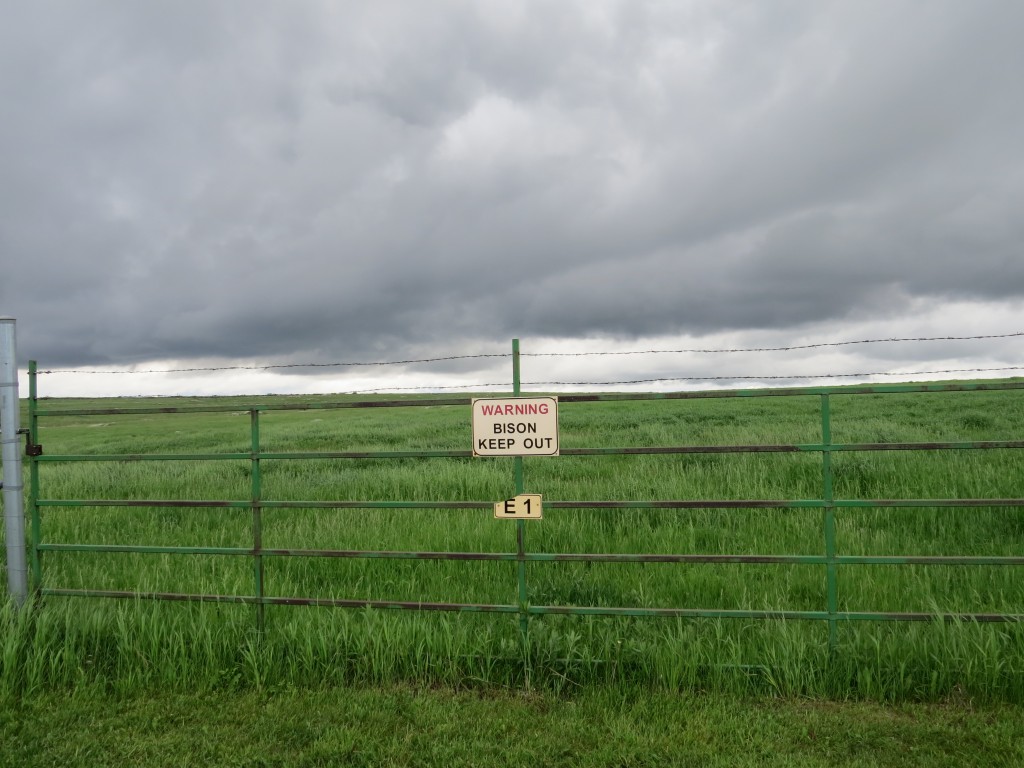 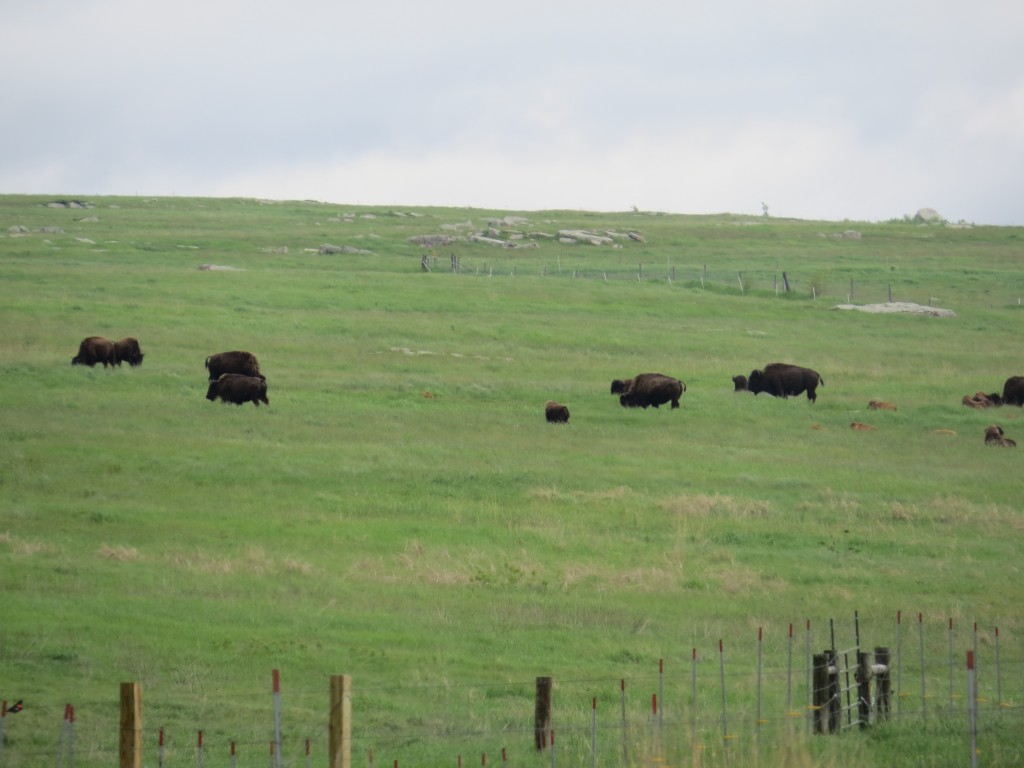 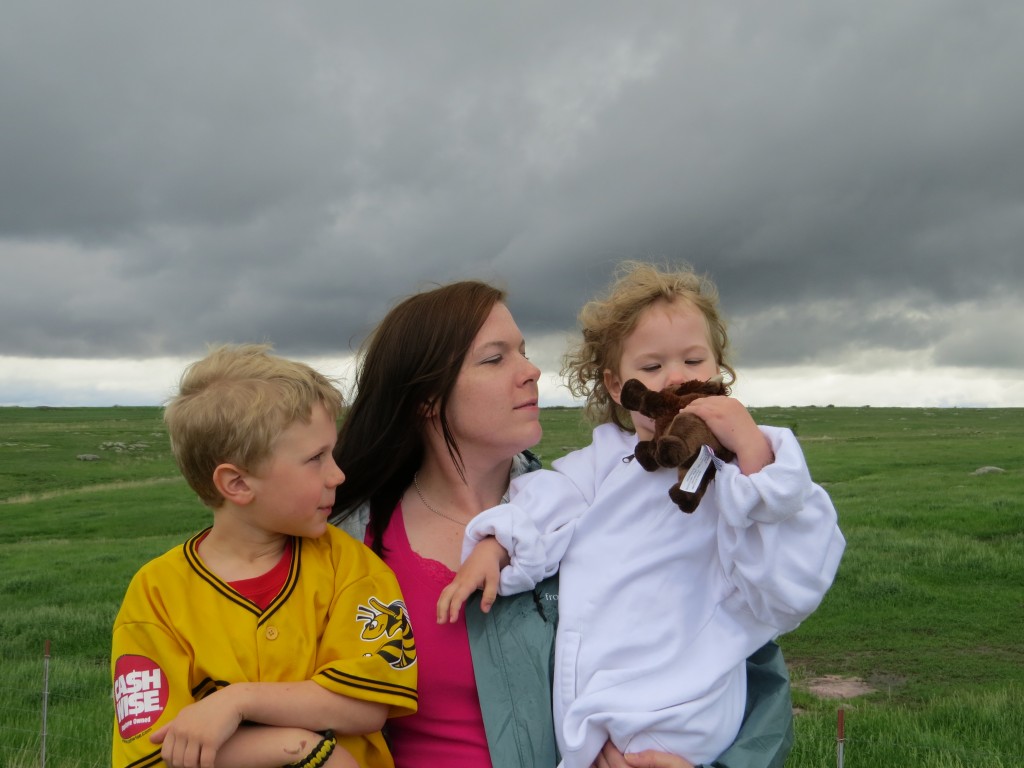 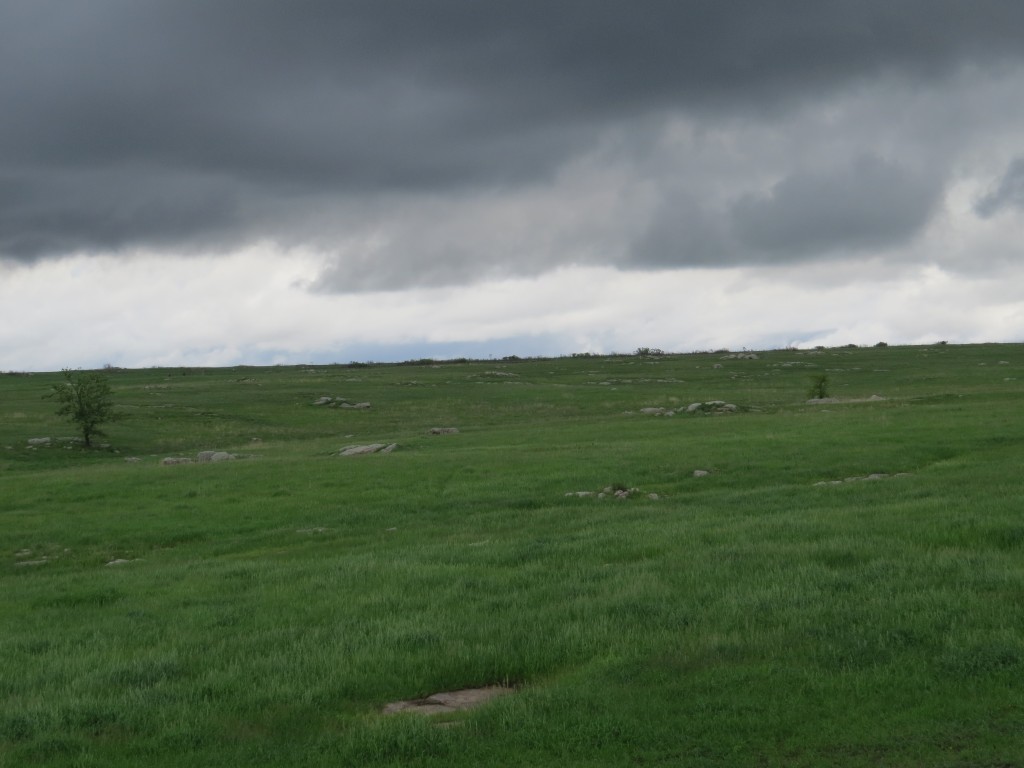 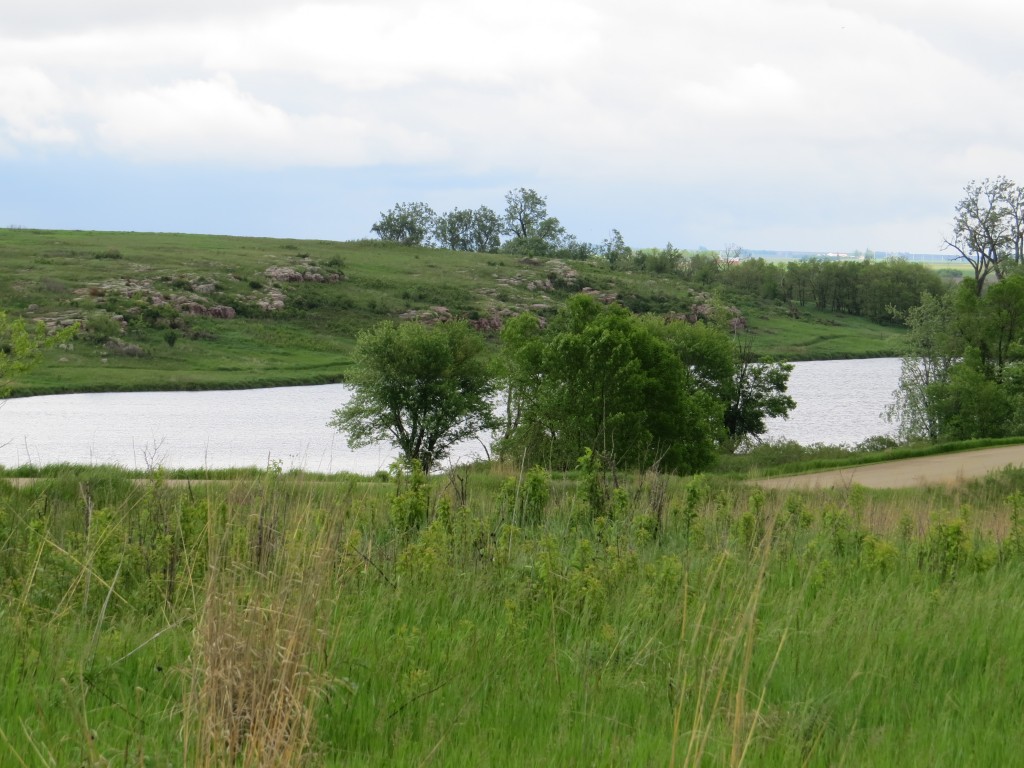 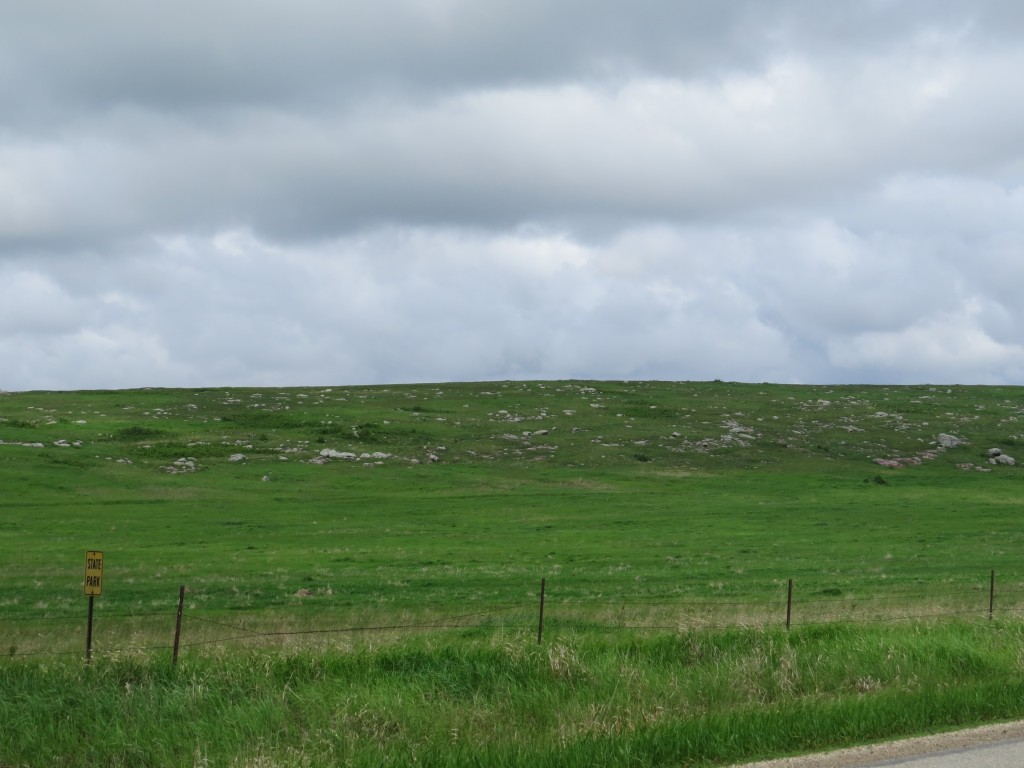 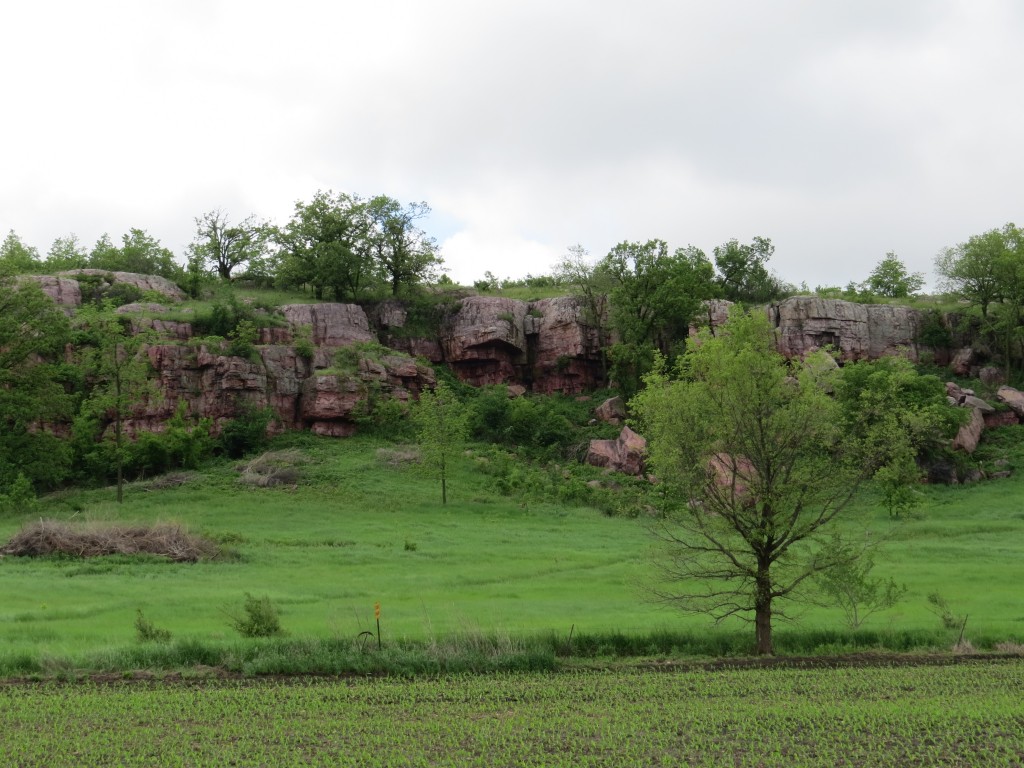 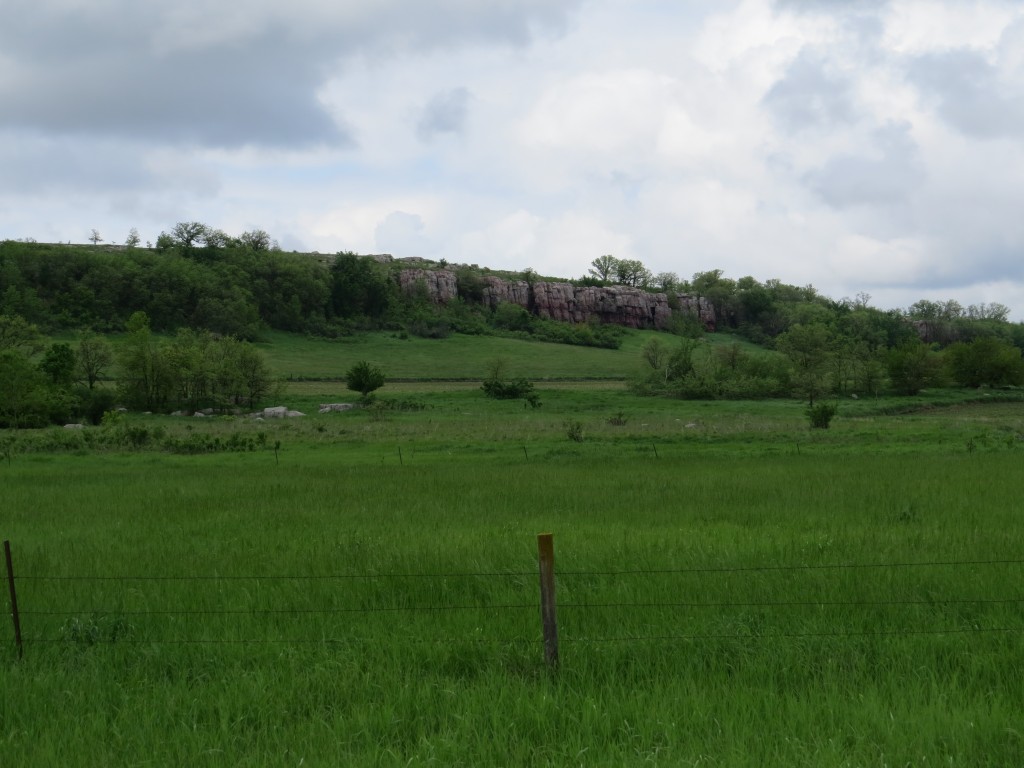 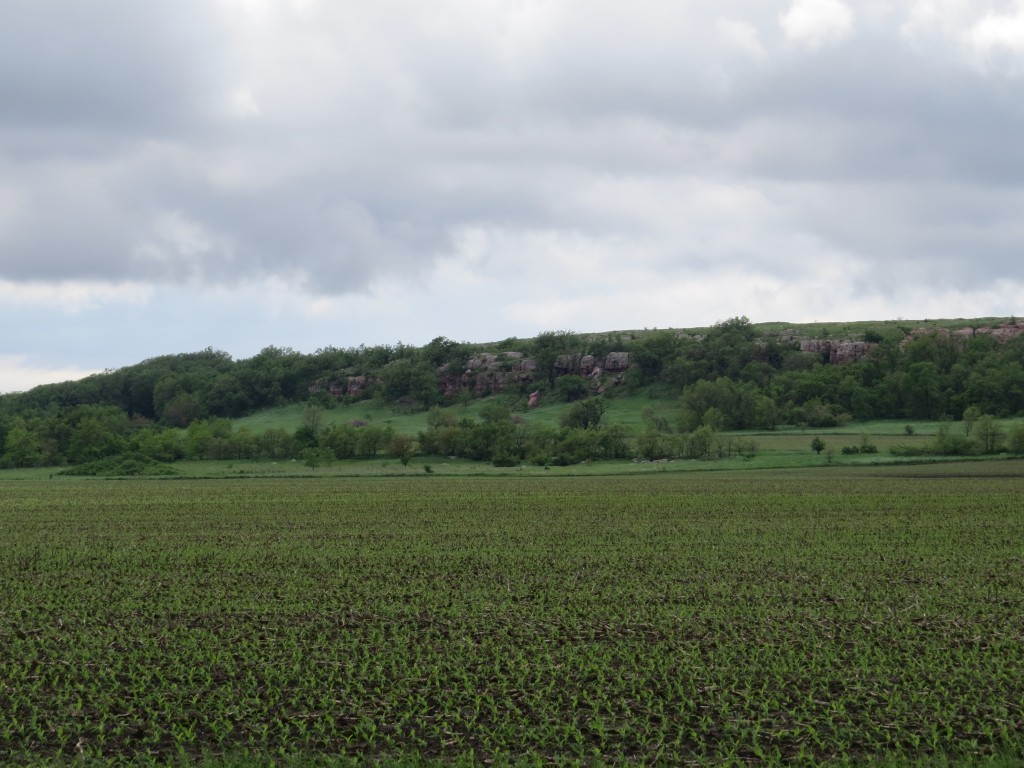 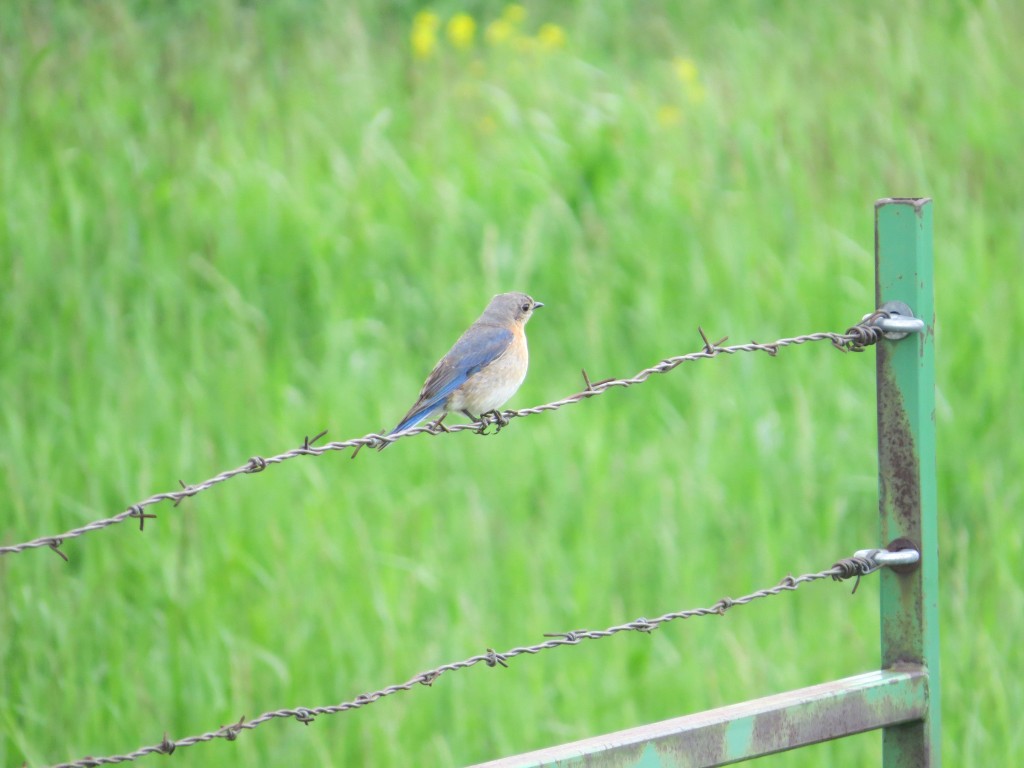 After we left the park, we took a quick drive into Iowa for no other reason than to cross the border and give the kids a new state.  Everybody was feeling good about how this trip ended after enduring nearly 36 hours of steady rain.  Good bye, Blue Mounds. Thanks for the memories, both good and bad.  We will definitely come back for more.