Friday night I debated setting an alarm to make sure we got out early before the rain came.  I don’t know if I was optimistic I’d wake up early on my own or if I was just lazy, but I didn’t set it. The next morning I woke up to a sickening sound – pitter patter pitter patter.  I cursed myself for sleeping in and missing our window.  It turns out I did wake up early after all; the rain decided to come ahead of schedule.  Darn it. Now what?

Eventually we were all awake trying to make sense of the day ahead.  Normal tasks, like going to the restroom or cooking food, were now very difficult since they required going out into the wetness and returning with water and debris.  While Melissa and I tried to keep the camper somewhat clean and livable, the kids entertained themselves by wrestling each other on their bed.  Time and cramped space got the best of us, though. It didn’t take long for the whining and fits to start.  The kids even joined in.  Finally I took the kids for a birding drive around the park which would end with a stop at the park’s interpretive center.  My purposes were twofold: 1) The kids needed something to do.  2) The park ranger told us the previous evening that someone had found three pairs of Blue Grosbeaks last week right by the interpretive center at the start of the Bur Oak Trail.  It was worth a shot.

It was a good soaking rain.  There was no let-up at all.  The bird activity was extremely minimal.  We didn’t even come close to seeing the numbers or variety we saw on our quick outing the previous evening.  I did manage to get a picture of a very wet, angry-looking Bobolink.  I wouldn’t want to be a bird on this day either. 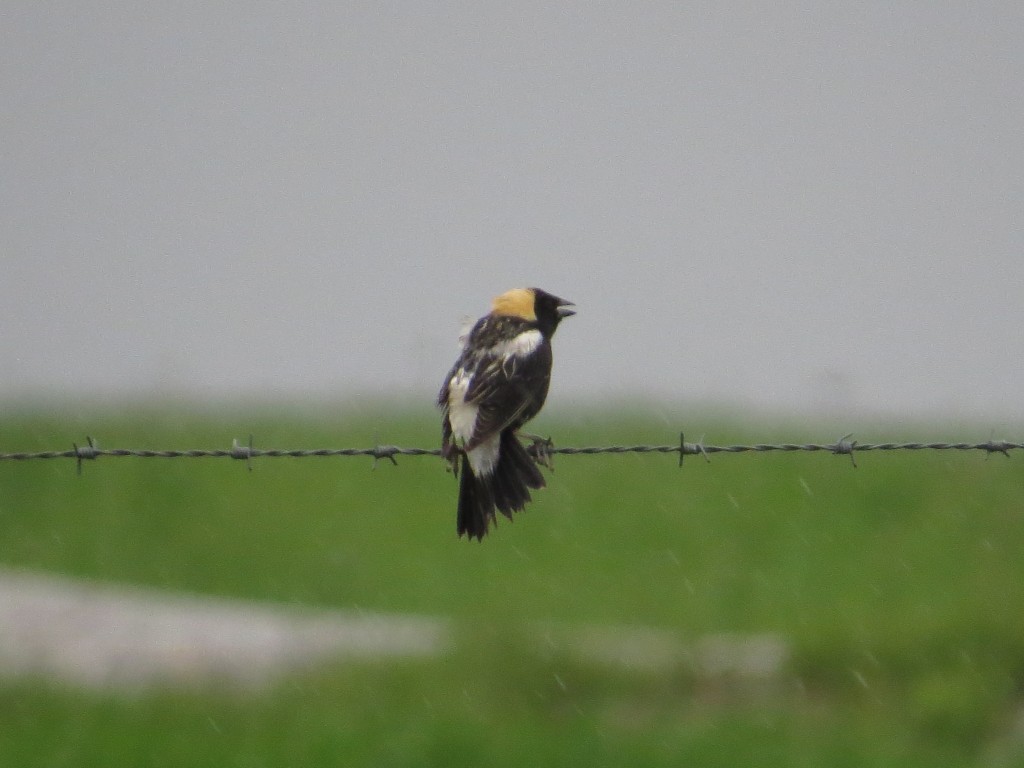 We eventually wound up at the interpretive center which is over two miles from the campground and park office. It is located at the southern edge of the park along a rocky bluff.  This center is built right into the hillside and used to be someone’s house in the 1960s. 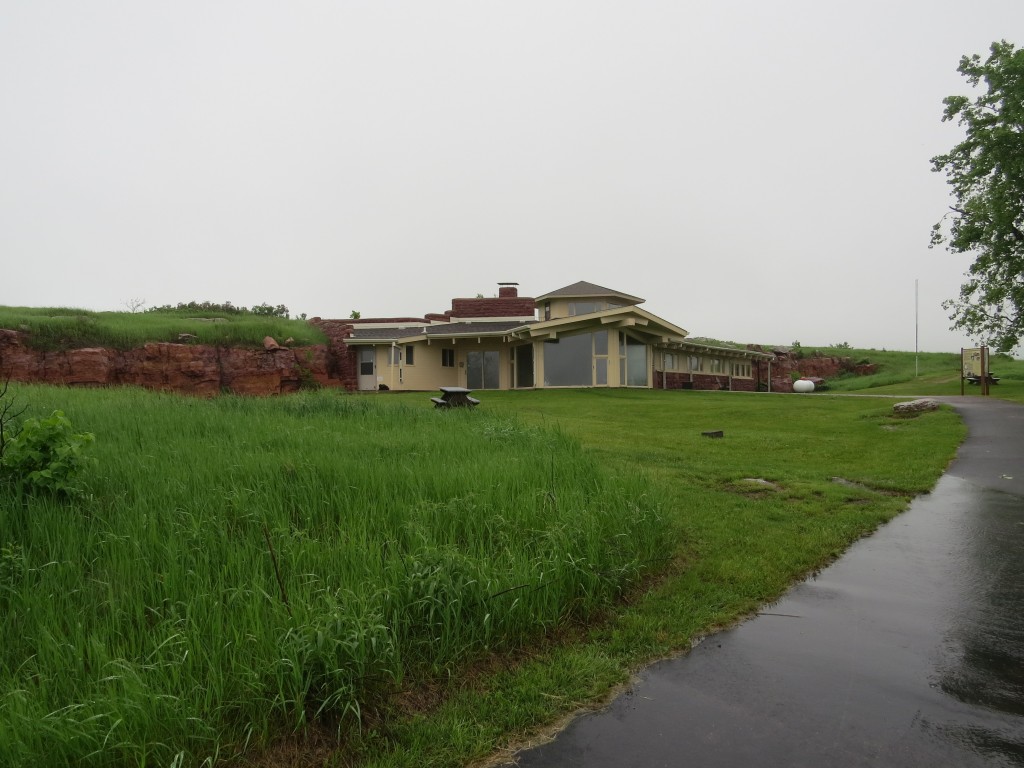 It was really cool inside.  Most impressive was the rock cliff that made up the center’s back wall.  It contained a fireplace with a roaring fire which felt so good on this day, and the bathrooms each had about a 15-foot rock cliff that made up one wall.  Besides the architecture, there was a full-size mounted bison that the kids loved. Additionally there were animal pelts on display, including a huge bison hide.  The bird taxidermy on display taunted us, especially since one was a life bird that was a secondary target for this trip – the Dickcissel, which is the small bird with the yellow chest and black bib on the left. 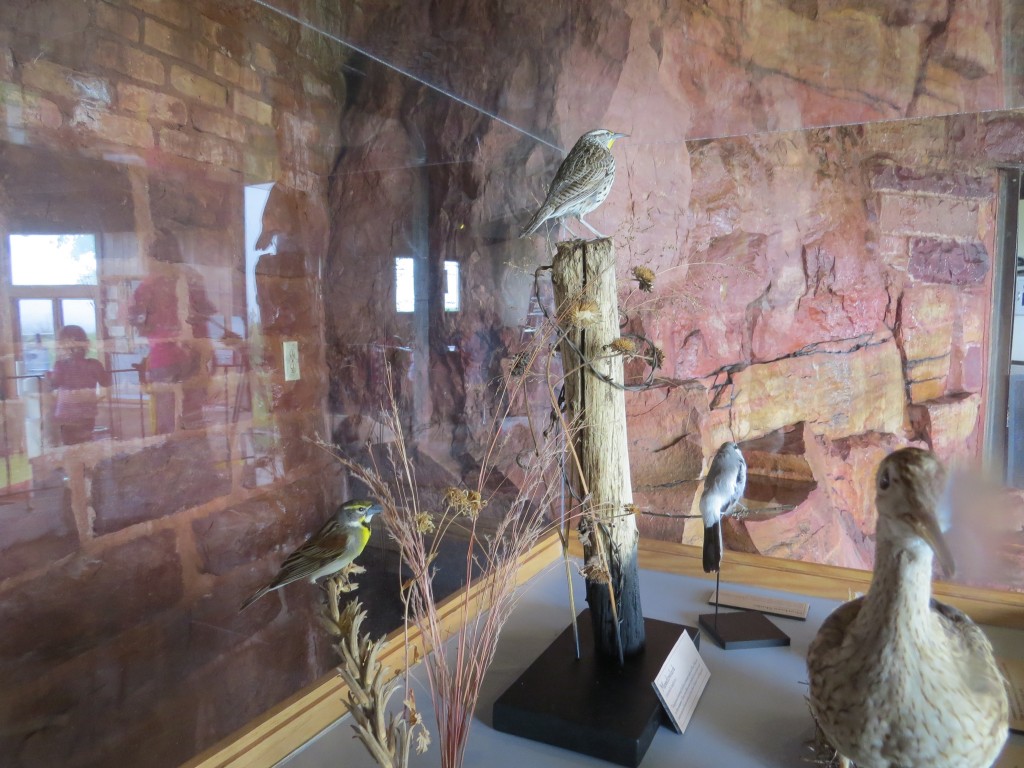 The kids looked through magnifying glasses at pinned butterflies, snake skins, and animal skulls while I chatted with the attendant about Blue Grosbeaks.  She explained they were literally seen from the paved path you see in the picture of the interpretive center shown above.  We saw no sign of them on our walk from the parking lot.  Not a flutter, not a noise.

On our way out we again carefully looked around this path for our target bird. No luck. We headed back to the camper for more wrestling and restlessness.  Once again the confines of the camper got to us.  We were all going crazy and getting crabby with each other. It was time for another trip.  This time Melissa came with us to see this amazing interpretive center for herself.  As we pulled into the parking lot and looked at the 100 yard walk to the center, the rain intensified.  Instead of ducking and running to the center, we kept driving and decided to take a quick trip into Luverne which was only a couple miles away to look for ponchos.  We weren’t going to let some rain determine how this trip was going to go.

Although we found a Shopko in Luverne, they did not have adequate nor enough ponchos for our family.  Shoot, Sioux Falls wasn’t more than a half hour away.  It’s a big city, so there had to be Wal-Marts and Targets everywhere.  Before we knew it, we were headed west. We’d be back to the park within an hour.  Or so we thought.  We didn’t recall how spread-out Sioux Falls was, nor did we know that a discount store would be so hard to find in this town.  After much searching we finally found a Target. Unfortunately nearly all of South Dakota’s population lives in this town, and they were all out and about buying all the ponchos.  We couldn’t find one.  Our search eventually landed us at a Wal-Mart.  Same story, except Marin got one.  I should say Melissa bought one for Marin while I weathered a different storm in the car – Marin was throwing a mega fit as she refused to go to the bathroom.

After battling horrendous traffic, stores crawling with people, and Marin’s temper-tantrums, we finally found a Scheel’s. If these people didn’t have rain gear, no one did. And if they didn’t, we were so on edge that we might have mugged some SoDak for his poncho. Thankfully it didn’t come to that.  Scheel’s had what we needed.

I couldn’t get out of Sioux Falls fast enough.  South Dakota wasn’t supposed to be people crazy like this.  Our trip wasn’t supposed to involve retail stores – at all.  On top of it all, the hope of finding our Blue Grosbeak was dwindling faster than a campfire in this never-ending rain. Four hours after our decision to head to SD, we were back at the camper.  Evan’s awareness of geography is growing, so at least he got a new state out of this snafu.

With new gear donned, the kids and I poked around the Interpretive Center one more time to find our bird.  Despite the poncho, Marin quickly grew unhappy, so we headed back to the camper after just a couple minutes.  The kids played, wrestled, and watched movies to entertain themselves. Every so often we’d go on a birding drive around the park.  We were desperate.  One of these drives was just Evan and me.  He’d been asking to go to the park store for some time.  At the store we picked up two small stuffed Bison and a Blue Mounds patch for Evan’s back-pack.  The Blue Grosbeak keychains and mugs taunted us.  While there, the ranger said the rain was supposed to subside by noon tomorrow. A glimmer of hope.

On this last drive of the day, I noticed something yellow in a bush through the fat drops of water on my driver-side window.  It couldn’t be a bird as it was absolutely motionless. It must be part of the bush.  I rolled down my window and pulled up the binoculars.  I couldn’t believe it.  I was not looking at a plant, but rather the bright yellow chest and black bib of the Dickcissel! This was an exciting life bird that made this ugly day a little brighter. I only got one bad photo of his bad side before this guy flew deep into the bush to try to keep dry.  This bird was a secondary target for us at this park.  We knew we could get the Dickcissel in our area, so it wasn’t as urgent.  Nevertheless, it was fun to check this one off. 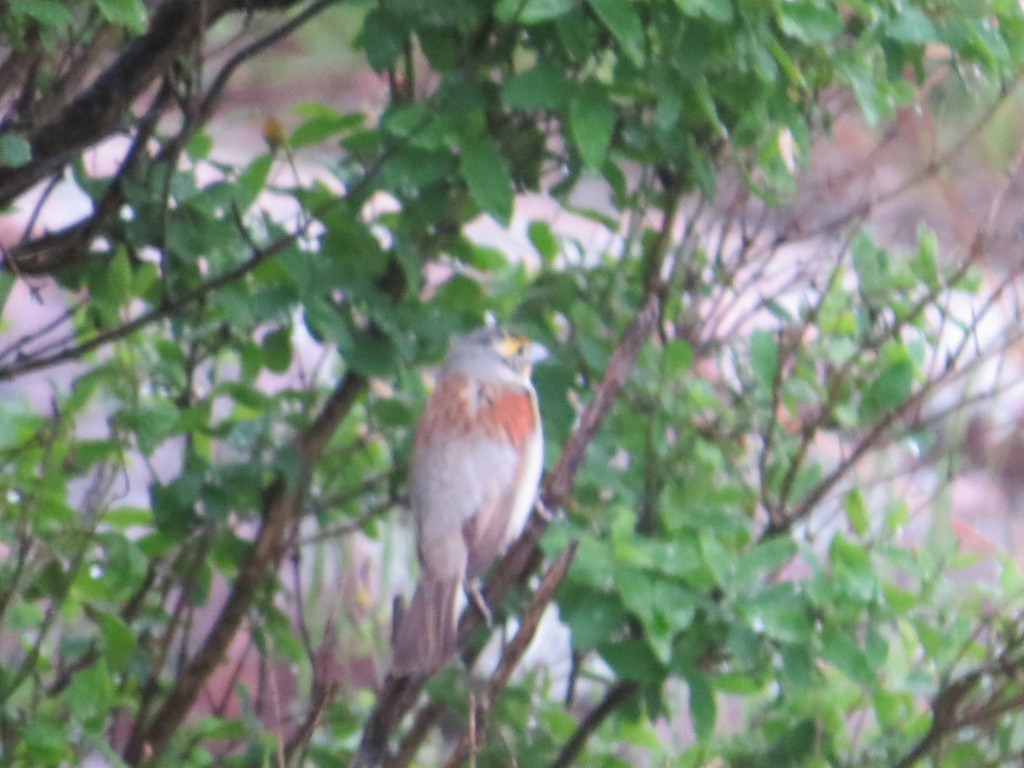 The relief in mood was only temporary.  The forecast was for solid rain all night and all day tomorrow (the ranger was wrong about it ending at noon).  It’s one thing to not find our target bird, but it’s entirely different to not even be able to adequately search for it.  Besides that, this park was gorgeous, and everything in it was screaming to be explored and photographed if only the weather would cooperate.

As I laid in bed that night listening to the incessant pitter-patter, I tried to scheme up a way I could bring Melissa back home on Sunday so she could work on Monday while the kids and I returned for another night or two of camping and exploring.  It was craziness, I know.  But the sunny and beautiful forecast for every day in the coming week and those darn key chains were teasing me.  It was the only hope I had as I drifted off to sleep even as the condensation from a buttoned-up camper now literally created rain inside and splattered my face.

Read Day 3, Last Day, of Blue Mounds State Park – The Search for a Blue Grosbeak by clicking this link.